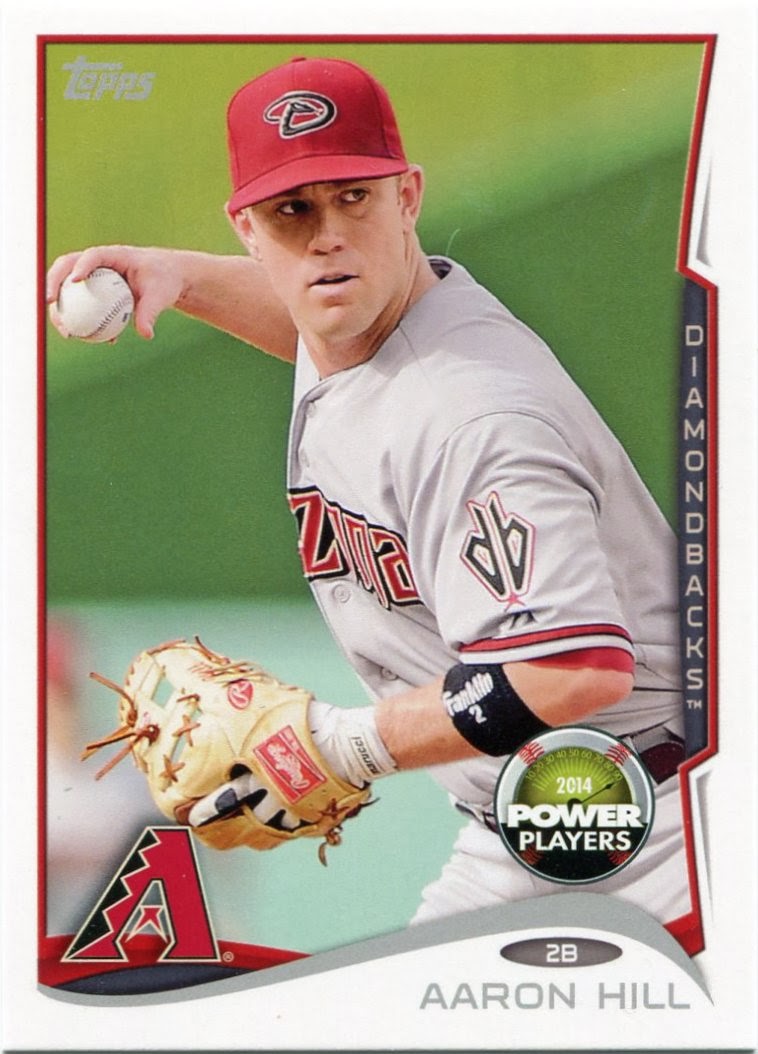 Down at the PWE lab, people are always looking for ways to spice things up a bit.

It's only natural. Heck, the "P" in PWE literally stands for "plain". I guess you can't blame people for thinking envelopes are fairly boring.

Over the years, though, the collectors down at the lab have made the PWE into something special. Some of the time, I get more excitement out of digging through a three-card envelope than a robust bubble mailer.

It's all thanks to those brilliant minds at the PWE lab. If you're not familiar with the joys of a plain white envelope, you're really missing out on the fun.

One person who definitely knows his way around a PWE is Mark, a friend of the blog, father to a brand new baby bot, and author of the awesome "This Way to the Clubhouse...". Is that enough accolades for you?

The "Power Players" Aaron Hill you see above was featured inside this terrific PWE, which made me realize that I haven't discussed these things at length yet.

I could care less about the actual promotion, but I actually like the inserts themselves. I'm happy Topps went back to featuring actual players on these, as opposed to those worthless "Million Dollar Chase" duds from last year.

Though the code on the back will forever go unused, I'll at least be able to give Mr. Hill a good home in my Diamondbacks binder. Mark is definitely a virtuoso when it comes to finding mini-collection hits.

The Watson is a coveted "pitcher at the plate", and a rare American League version, at that. It made my frankenset without much of a battle.

That actually reminds me that Mark is starting up his own all-horizontal frankenset, which is one of the best frankenset ideas I've ever heard. Go and help him out if you can. I know I will.

Mark continues to make me jealous over the five-dollar LCS repacks he posts every so often on his blog. I especially drooled over the Isringhausen when he featured it a while back. I called it "SWEET" in all caps at the time.

I guess Mark took the hint, as he graciously included it in this most recent PWE.

Here's the newest innovation by the people at the PWE lab.

Collectors are constantly looking for ways to send as many cards in an envelope as possible. I was usually limited to a maximum of three, and that was only if I had one of those extra-thick toploaders lying around.

However, someone came along and unleashed one of the more brilliant PWE ideas in recent history. I'm not sure who started it, but chopping up nine-pocket pages into thirds and shipping them out that way is apparently a thing now.

This Hall of Fame trio came courtesy of a contest I recently won from the ever-generous John of "Johnny's Trading Spot".

The Banks on the extreme right lists him as a shortstop, yet clearly features a shot of him playing first.

"Mr. Cub" would've fit well within one of my recent posts.

On the very same day that John's three-pocket PWE arrived, an envelope from Jeff of the terrific blog "One Man's Junk Wax" hit my doorstep.

In an odd coincidence, he also used the three-pocket method. He fit about fifteen cards into this PWE that way.

Though the LaRoche and Peavy "Power Players" inserts were the only ones I knew were coming, Jeff slipped in a slew of vintage Cubbies as well. It's hard not to like Paul Reuschel's specs.

Just when you thought the world of PWEs couldn't get any better, the collectors down at the lab came up with this brilliant three-pocket thing.

I'll definitely be trying it at some point in the future. 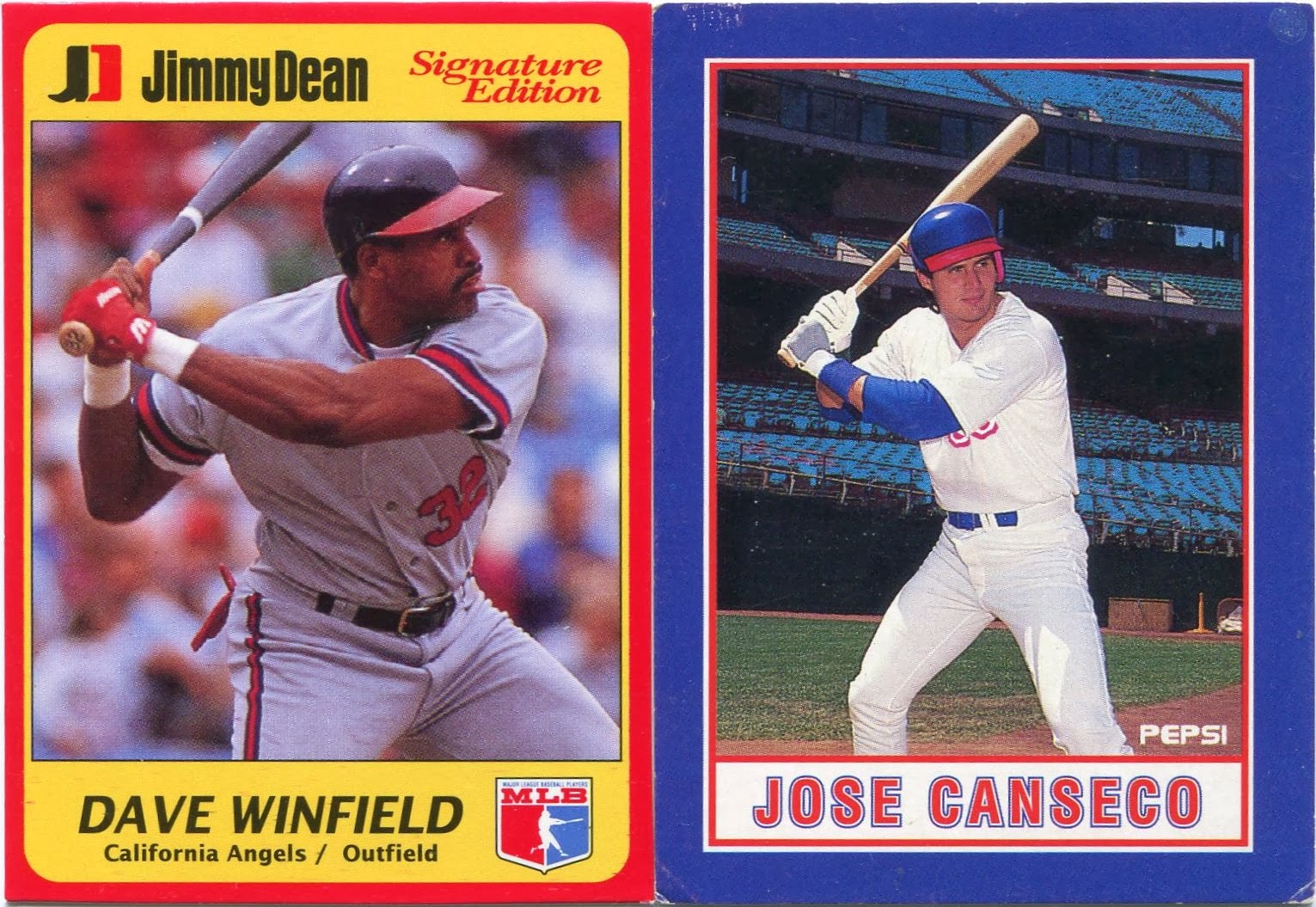 Though it didn't come in three-pocket form, Jeff also dropped a separate PWE on my doorstep a couple weeks after that first one.

As I quickly found, it was almost entirely oddball-laden.

I normally wouldn't get too excited over a card of Jose Canseco, but I have to admit that those Pepsi oddballs are pretty spectacular. Reader Mark is quickly becoming one of the newest legends around the blogosphere.

Luckily, I've been on the receiving end of Mark's giving ways. Though I haven't posted about it yet, he recently sent me an absolutely jaw-dropping trade package that you have to see to believe. (The post will be coming very soon.)

Still, Mark decided that wasn't enough. I guess he read my post about spearing one of my "white whales" with Willie Randolph's 1976 SSPC issue, his only solo card as a Pirate.

However, Randolph is featured with the Bucs on his '76 Topps rookie as well. He just had to share the spotlight with three other guys.

Though the SSPC issue was my main concern, I'd always wanted a copy of the multi-player Topps card as well. Mark was there to take care of that.

I can't thank him enough. 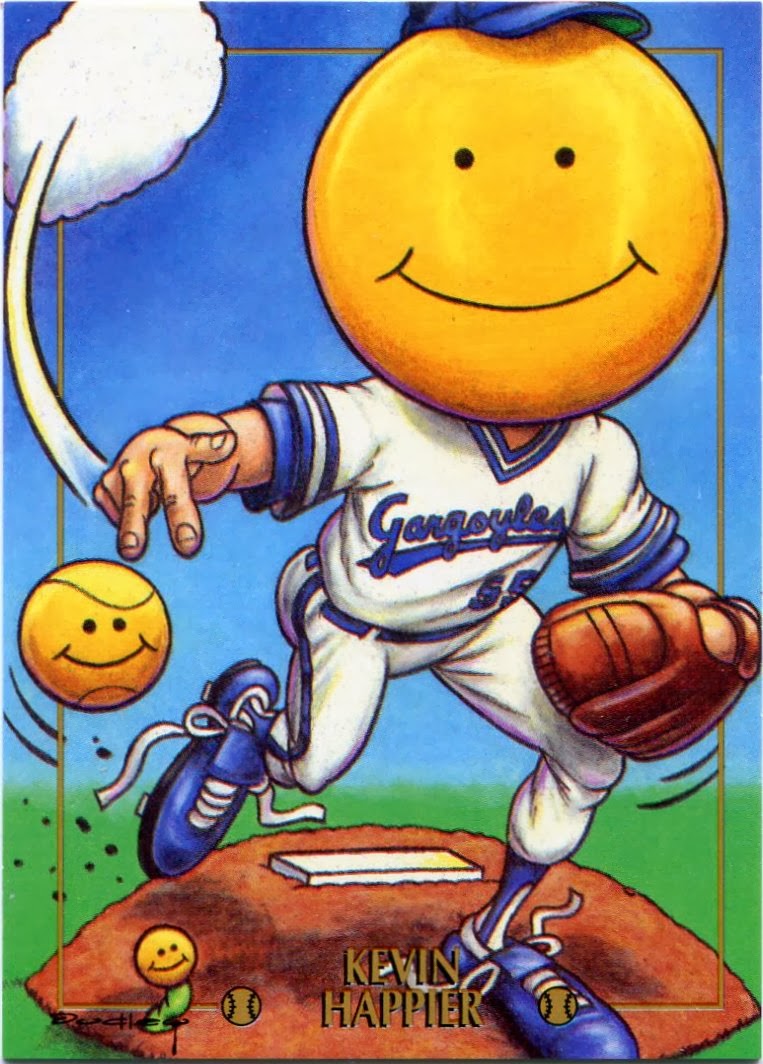 I am not responsible for this card popping up in your nightmares.

You'll have to blame Ethan of the awesome blog "Playing With My Cards" for that. He's the one who sent it to me.

This freakishly cool "Kevin Happier" (parodying former pitcher Kevin Appier) comes from the hilarious 1993 Cardtoons checklist, one that made quite a few appearances in Ethan's last Random assortment.

I definitely need to find more of these things. 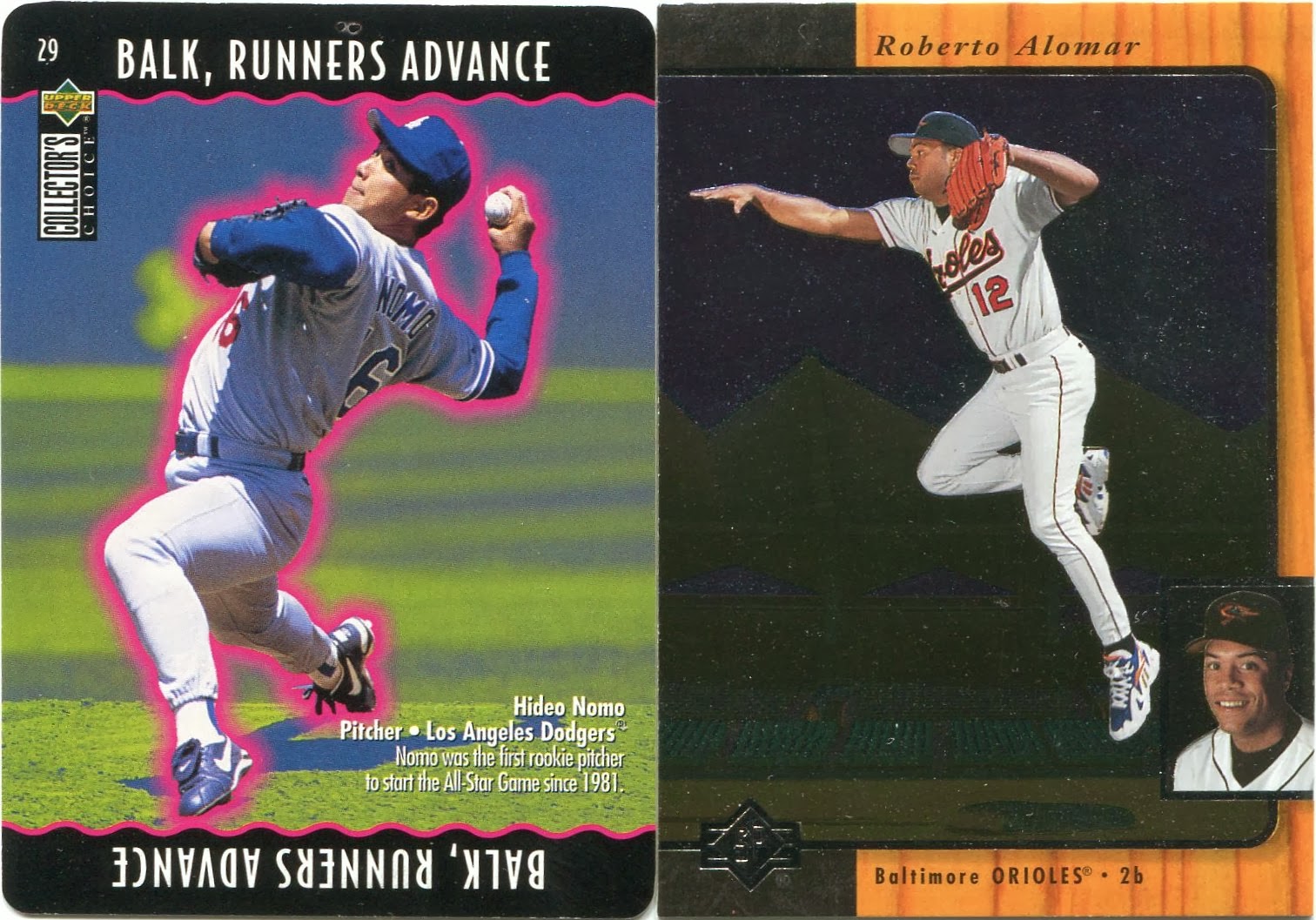 As part of a birthday PWE that Ethan put together for me, these two beauties were also included with "Mr. Happier".

The Alomar is probably the first faux-"double dip" card I've found. It's obvious that the photographer wanted to simulate a double play. There's just one problem. 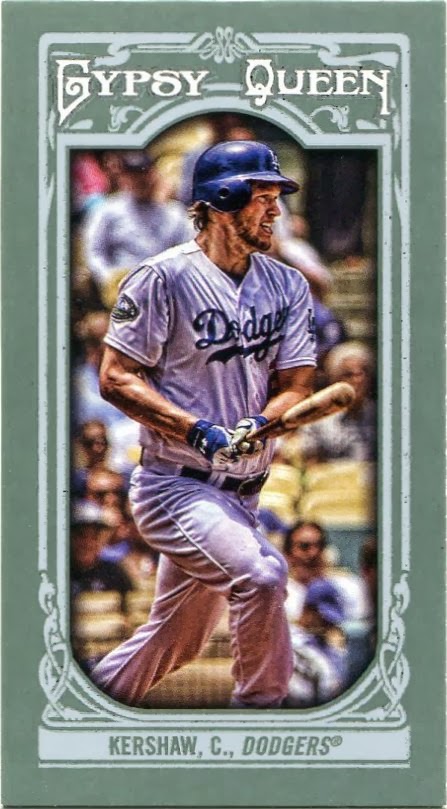 Ethan closed out this PWE with one of the better-kept secrets of 2013.

I hadn't heard a peep about this card until it arrived on my doorstep a few weeks ago. In today's hobby, shots of "pitchers at the plate" are a rarity.

At some point, though, Gypsy Queen quietly slipped this card onto the market. As it turns out, Mr. Kershaw here is a GQ mini photo-variation short-print. Got all that?

I can't say I can name another mini "pitcher at the plate" in my collection off the top of my head.

There's a good chance this is my first.

With people like these at the PWE lab, you just never know what you're going to find next.
Posted by Nick at 3:55 PM

Thanks for the accolades, Nick! I didn't utilize the code on that Topps card, so feel free to give it a whirl!

Greg: Sorry. When you see posts at your site featuring the hundreds of Dodgers cards you get from people each week, you tend to assume that you have them all.