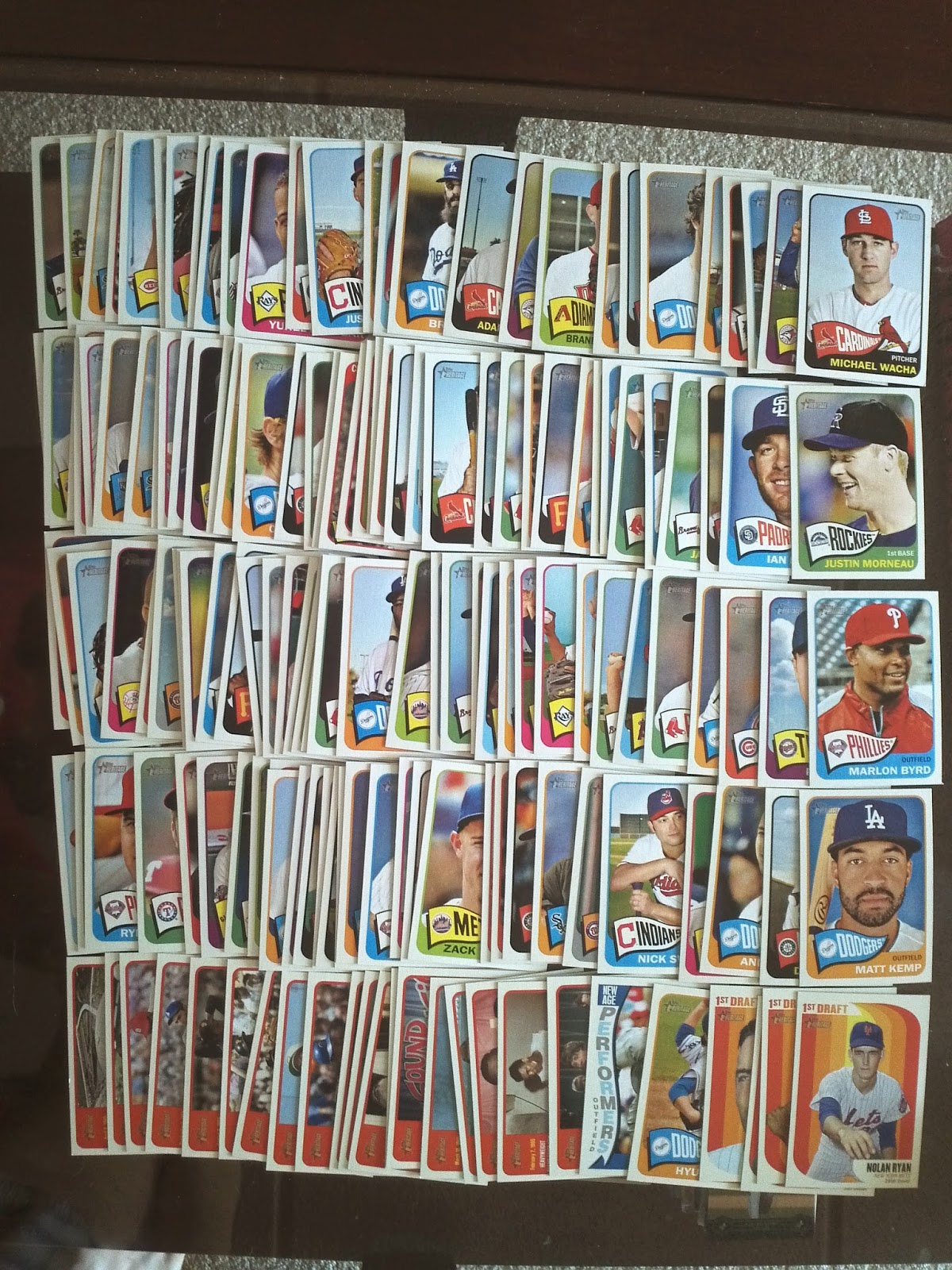 If you read my post this past Friday, you know that one of my primary goals for Saturday's show was to pick up some 2014 Heritage.

Though I went to my local Target on multiple occasions in search of the new product, I was shut out each and every time.

Heritage is always cause for excitement around here, but this year's offering was extra-special to me for one simple reason.

Of every design ever made, 1965 Topps is my absolute all-time favorite.

I've said this before, but when I think of a baseball card, '65 Topps comes to mind. The vivid colors. The team name pennants. All of it. They are as close to perfect as baseball cards can come.

It's insane to think that this year's Heritage could come even close to the original, but I was itching to get my hands on some at Saturday's show. I even had a specific part of my budget earmarked for Heritage.

As you can see from the photo above, I absolutely scored. 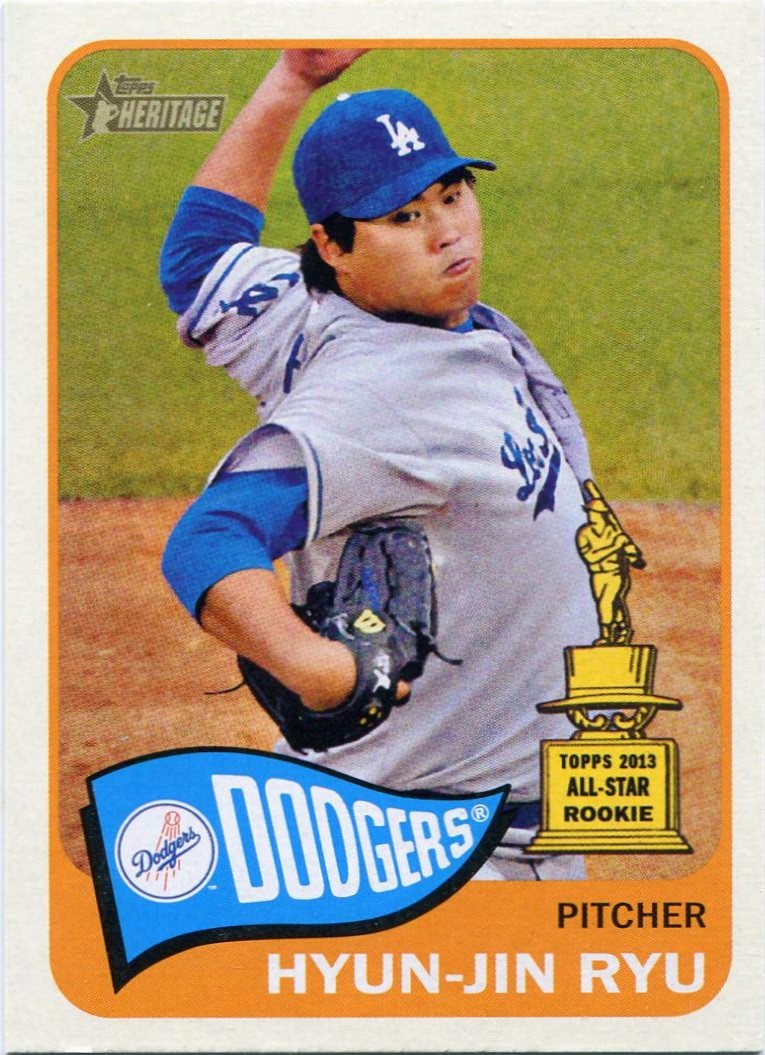 But I almost didn't.

After walking through the entire show, my dad and I found exactly one vendor with Heritage for sale.

And even that was limited to a couple cards from a dollar box.

In an odd twist of fate, the first Heritage card this so-called "low-end" collector picked up was one of those rare action-image SPs of Hyun-Jin Ryu. Not a base card. Not an insert.

I'm not sure if the vendor knew exactly what he had with this one, as I'd imagine these fetch a little more than a buck.

I plunked down my dollar without a second thought. 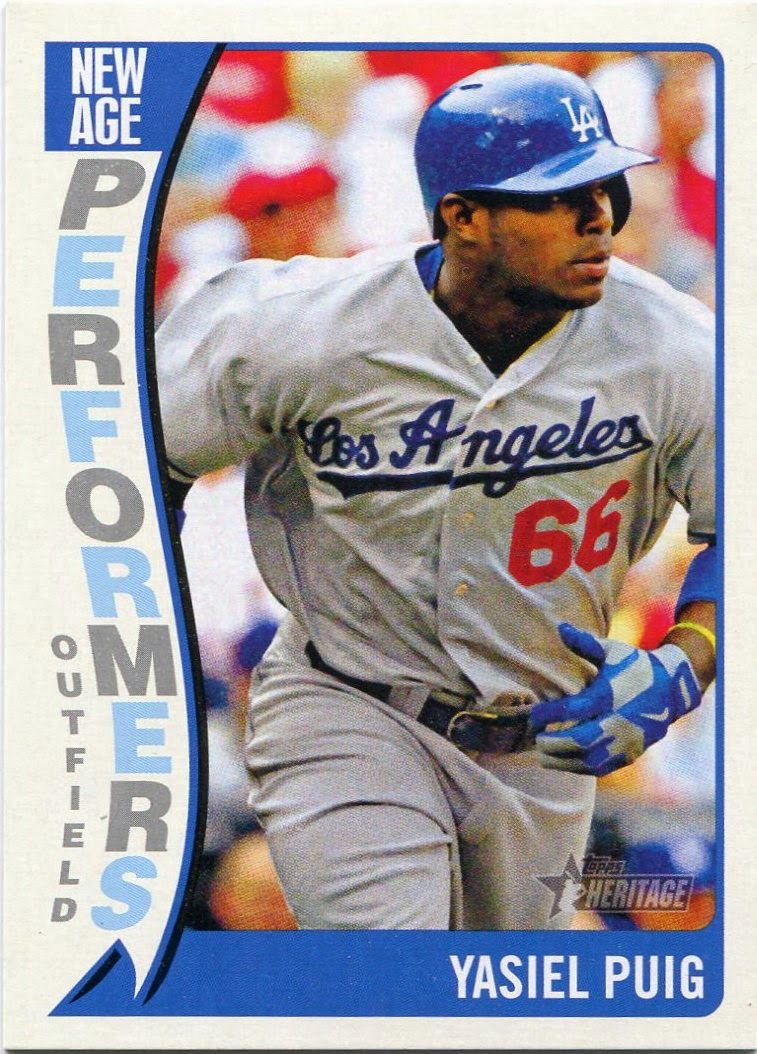 The second Heritage card I snagged was an insert of some guy named Puig.

This was also in the dollar box. With the Puig-mania that's been sweeping the nation lately, a dollar for anything of his is a pretty fine deal.

I don't buy Heritage for the inserts, but I do like the look of this year's "New Age Performers" series.

About four hours after I bought these, my dad and I reached the last aisle of the show. Ryu and Puig were still the only Heritage cards in my bag at that point.

With a decent amount of cash left over, we went back to see if I'd missed anything the first time around.

Someone had to have some Heritage in that giant convention hall. 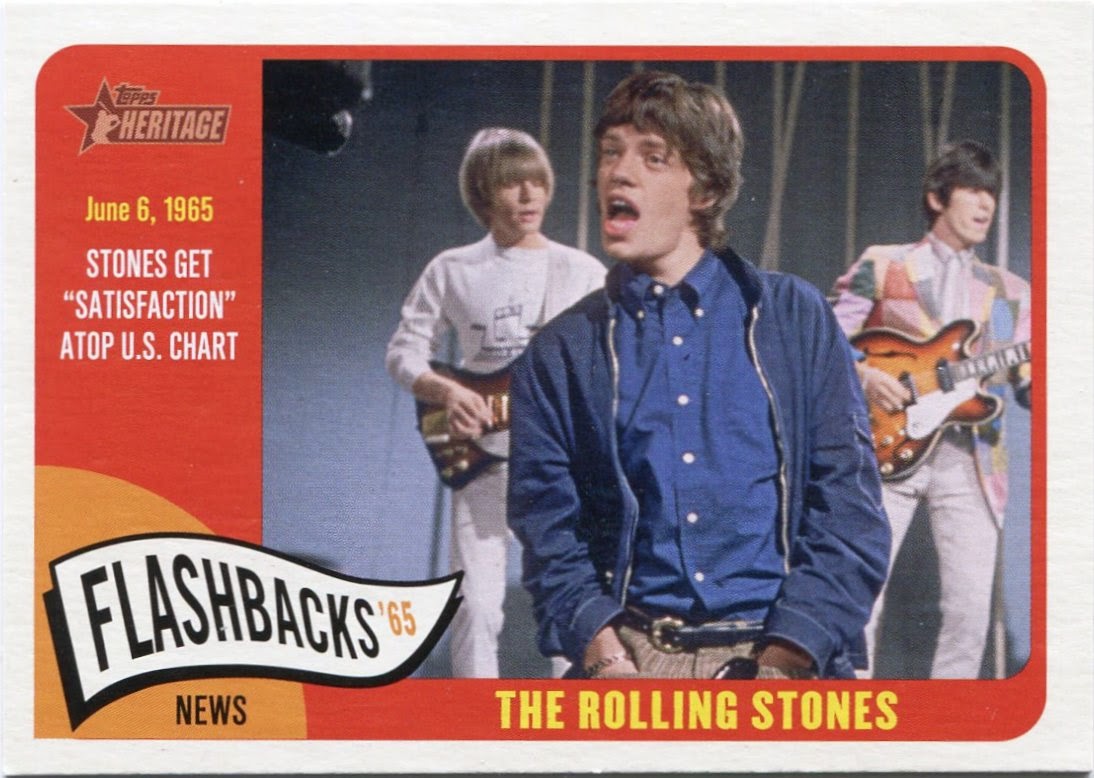 We retreated to one of the dime box vendors I'd dealt with earlier in the day.

This time, I noticed something behind the counter that I hadn't seen the first time. It was a huge box with the 2014 Heritage logo on it, packed with singles from this year's release.

Since the cards weren't out on display, I asked the guy if they were for sale. He said they were and retrieved them for me. Because none of the cards were priced, I was a little worried at first. The vendor said he'd give me a deal on whatever I picked out, so I started digging.

From what I could gather, this guy must've busted a few cases of Heritage. He had uber-rare SPs, autographs, refractors, and just about everything you could think of in his glass case.

In the box I raided, there were multiple copies of nearly every base card and insert. If this were earlier on in the show, I would've been more careful about what I picked out. But, since this was the last table of the day, I went nuts.

I picked out nine of the ten "News Flashbacks" inserts (I somehow missed the Gateway Arch one if anyone has an extra available)... 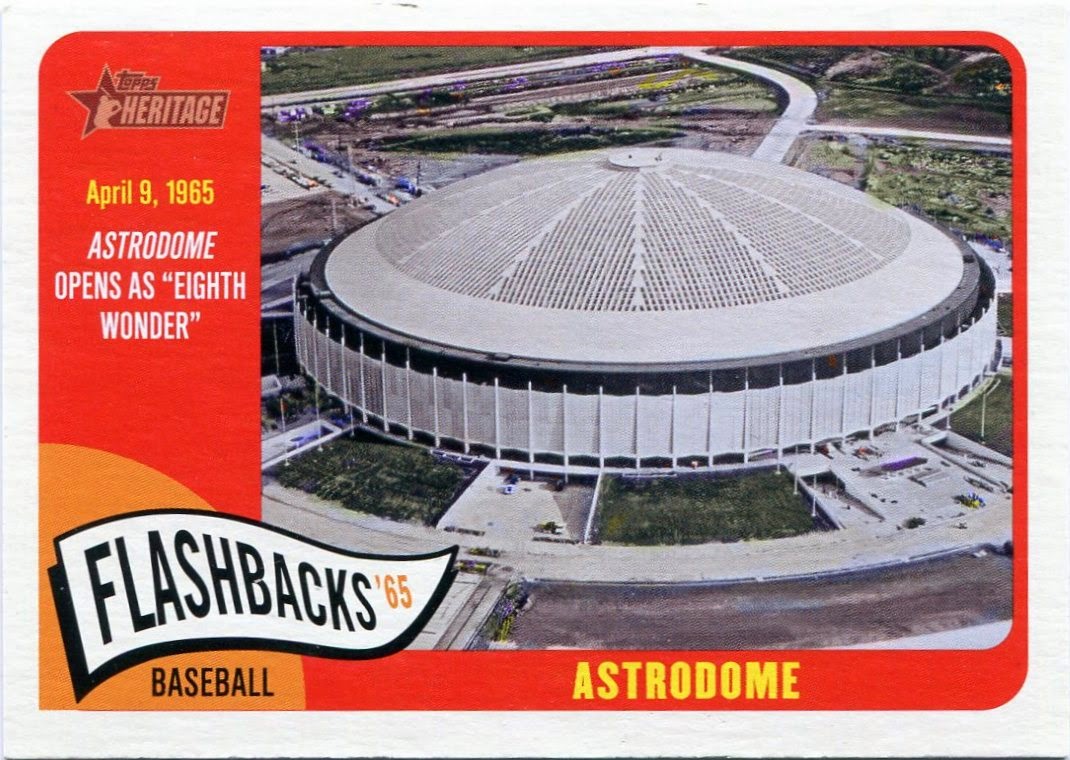 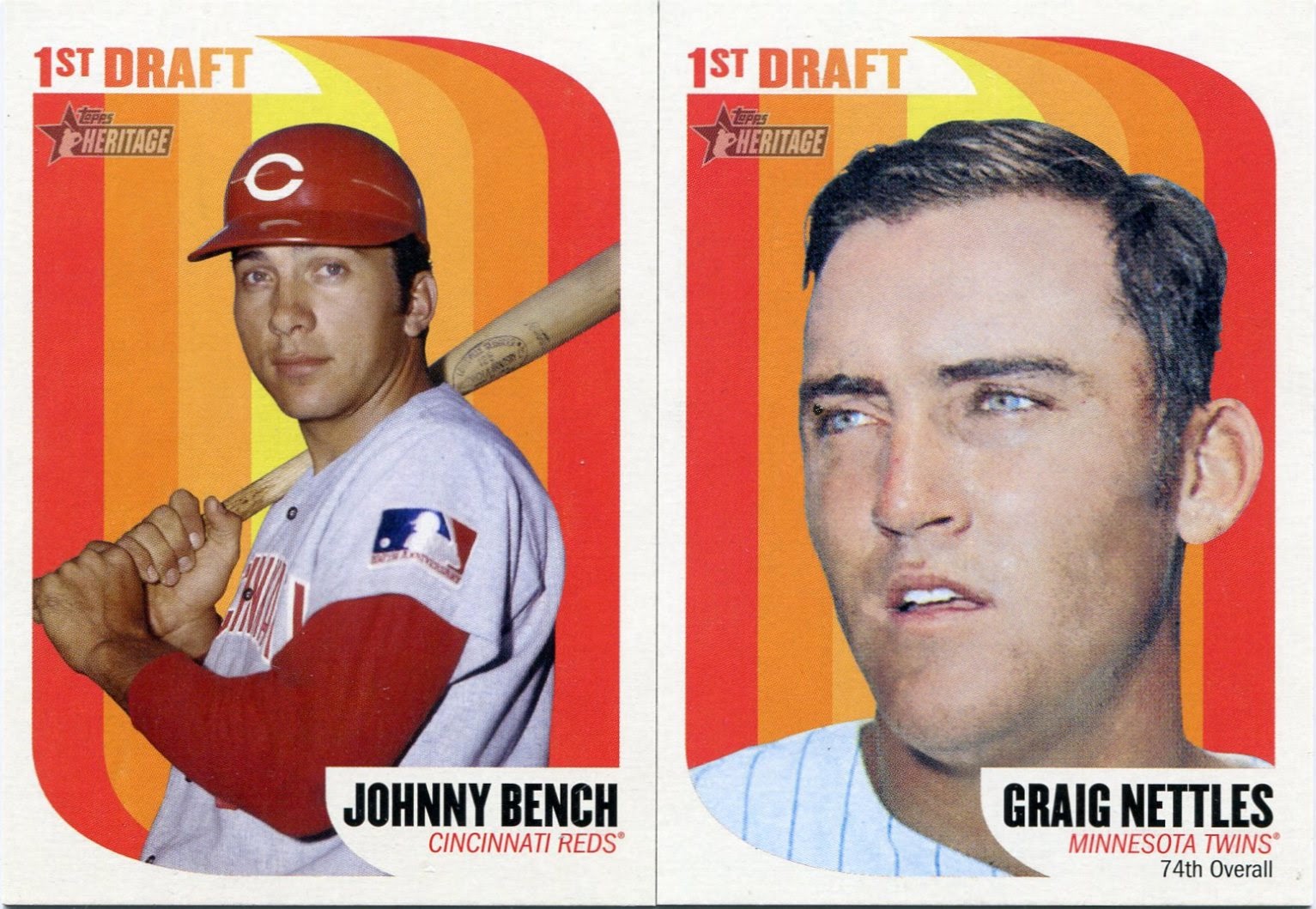 All four pieces from the new "1st Draft" insert set... 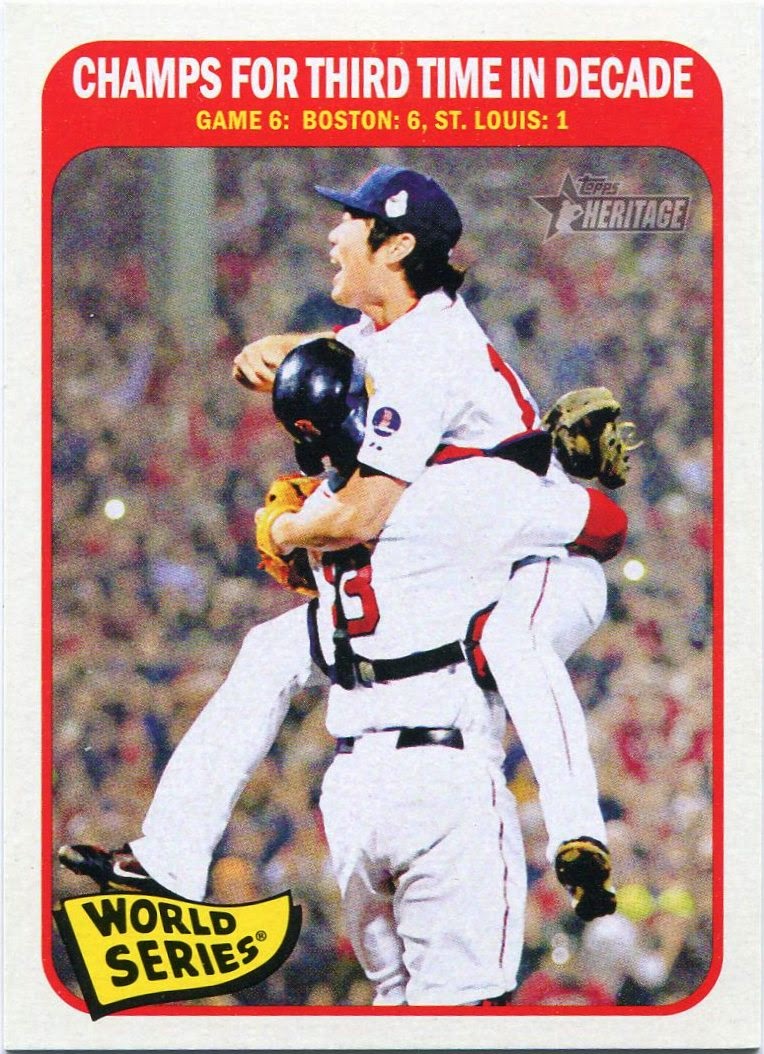 And every single one of the 141 Heritage base cards I needed from this guy's spares.

To recap, I got every single base card and most of the inserts I really wanted from this year's Heritage for less than half the price of a hobby box.

That's a Heritage conquering if I've ever seen one.

Since I obviously won't be picking up any packs of this stuff now, this card show post will double as my official Heritage recap for the year. (If you're Heritaged out by now, I apologize.)

One of the first things that caught my eye was the beauty of this year's World Series subset. I've always liked these, but I don't ever remember them being this nice.

More on that later. 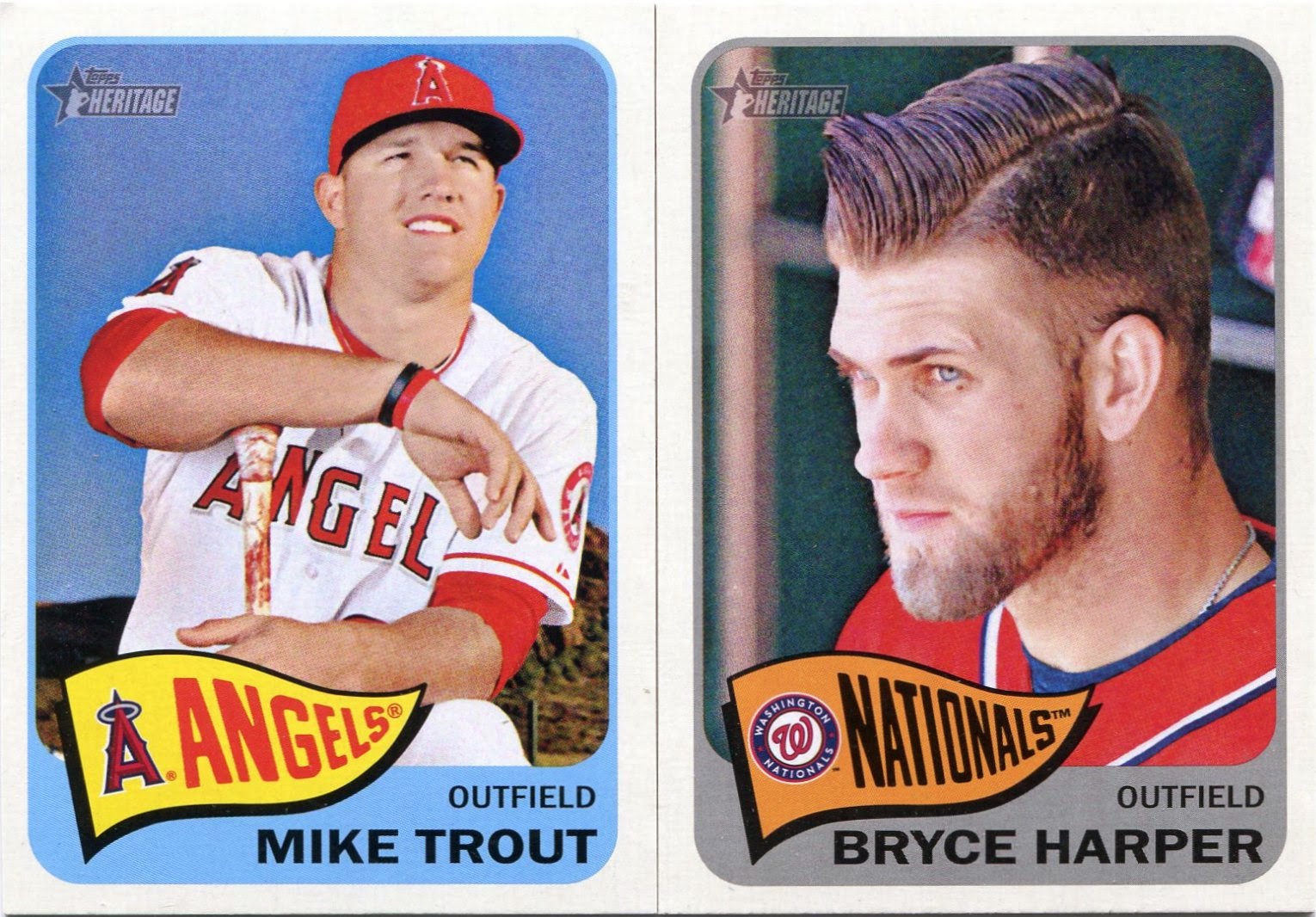 I really only have one problem with 2014 Heritage.

Just like last year, Topps shrewdly placed many of the stars in the SP checklist. I don't see how a move like that is anything but a cash grab for the company. It's also a big slap in the face/middle finger/whatever you want to call it to set builders and general low-end collectors like myself.

This vendor did have nearly every single Heritage short-print available, but I didn't bother with them. They're too rich for my blood. And it's no thanks to Topps. (Let's not even get into the absurd prices of this year's throwback SPs.)

If there's a light at the end of the tunnel, Topps at least threw us a bone by inserting Mike Trout and Bryce Harper into the standard base checklist. 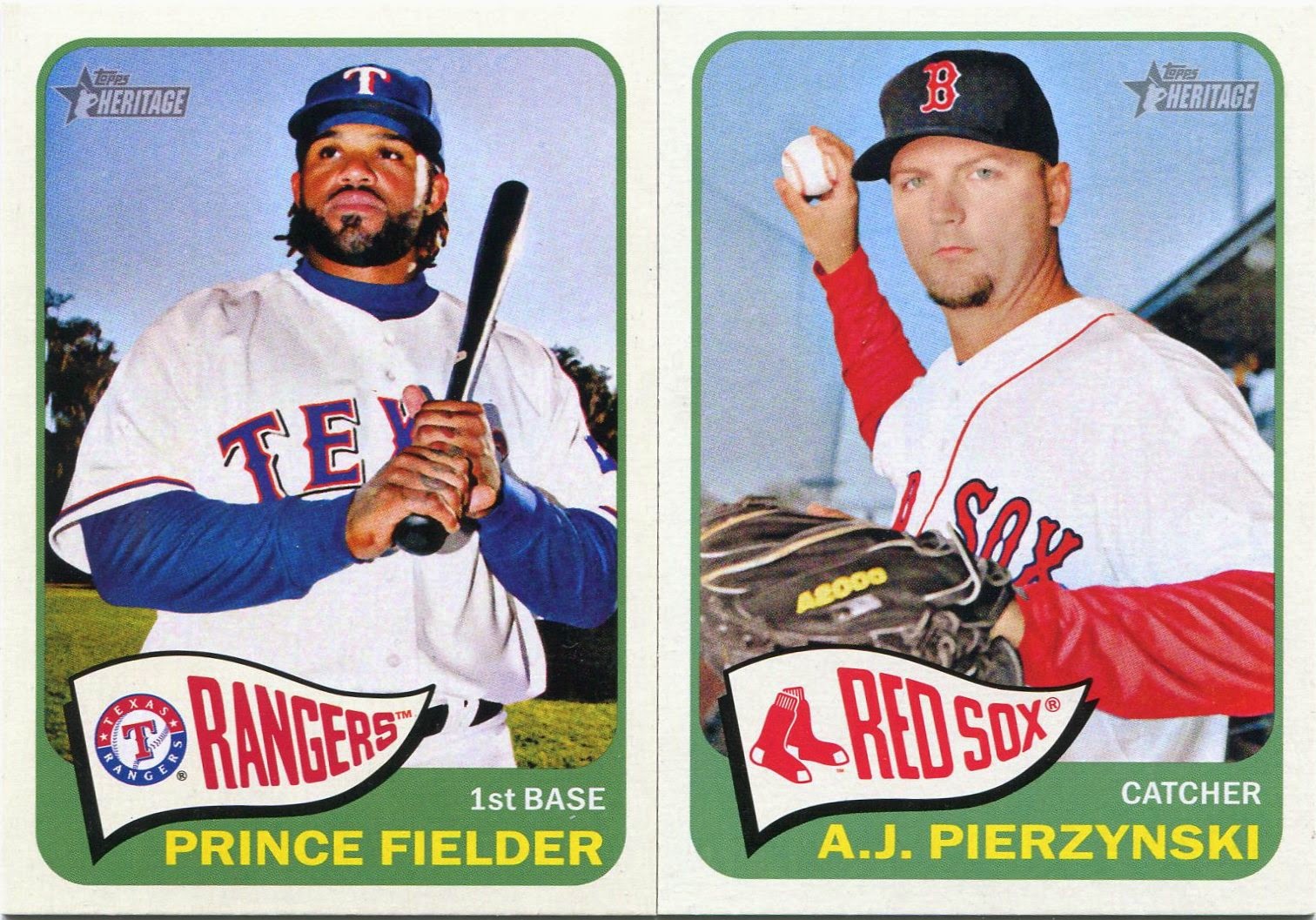 All in all, though, that's basically the only gripe I have with 2014 Heritage.

Everything else about this set is absolutely beautiful.

These stay about as true to the original more than any Heritage offering I can remember. Almost everything about the design and photos Topps used remind me a lot of the actual 1965 release.

Another thing I enjoy about Heritage is that we get to see a lot of the big offseason acquisitions in their new uniforms for the first time.

In an era where we've come to expect lazy or downright awful photoshopping from Topps, the ones used in Heritage are anything but.

I'm pretty sure these aren't actual photos of Fielder as a Ranger or Pierzynski as a Red Sock, but you'd never know that from the awesome job Topps did here. 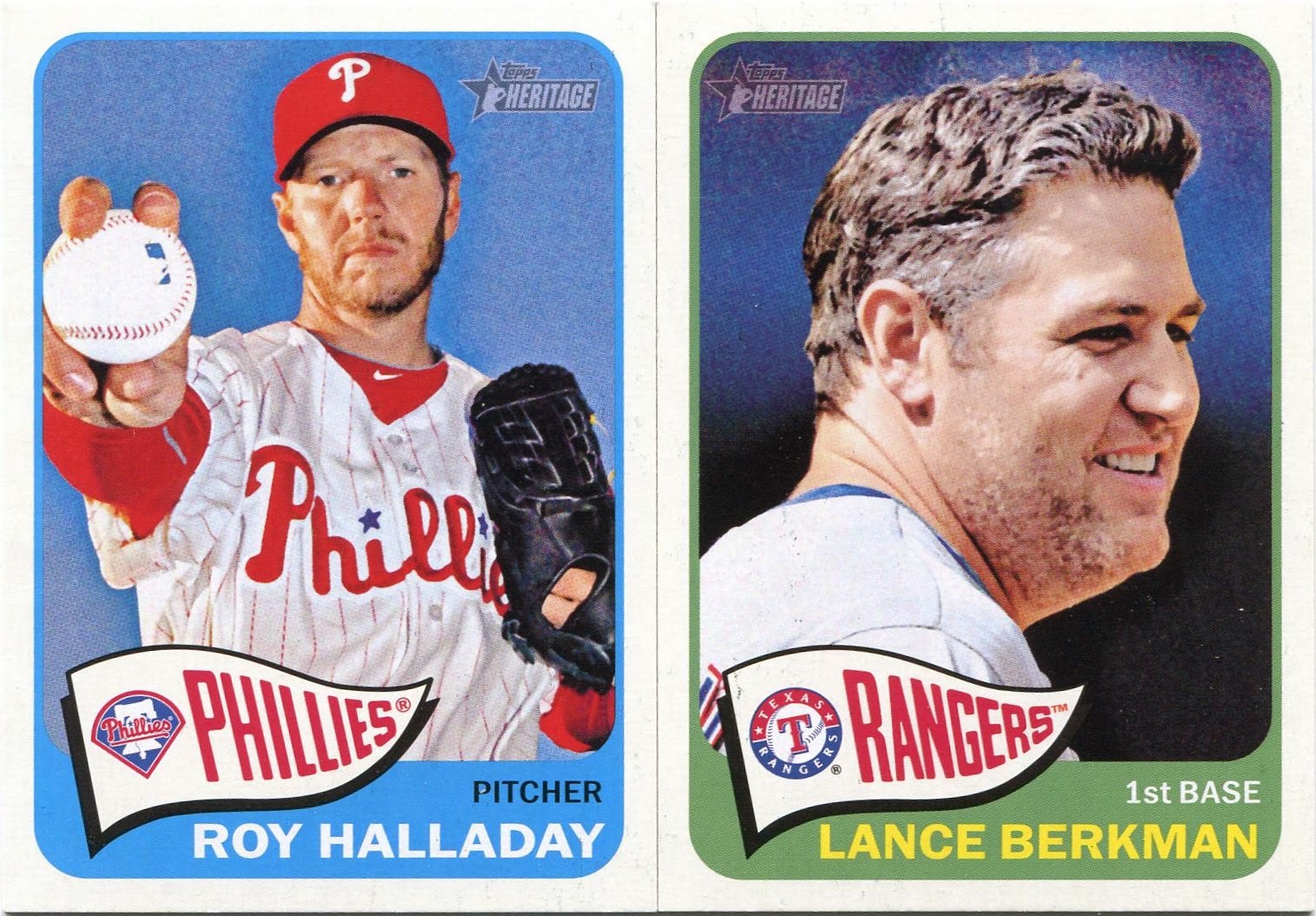 Seeing as how Topps omitted them from their Flagship checklist, I assumed Roy Halladay and Lance Berkman wouldn't get true "sunset" cards.

Both are present with complete career stats on the back in 2014 Heritage.

Speaking of the backs... 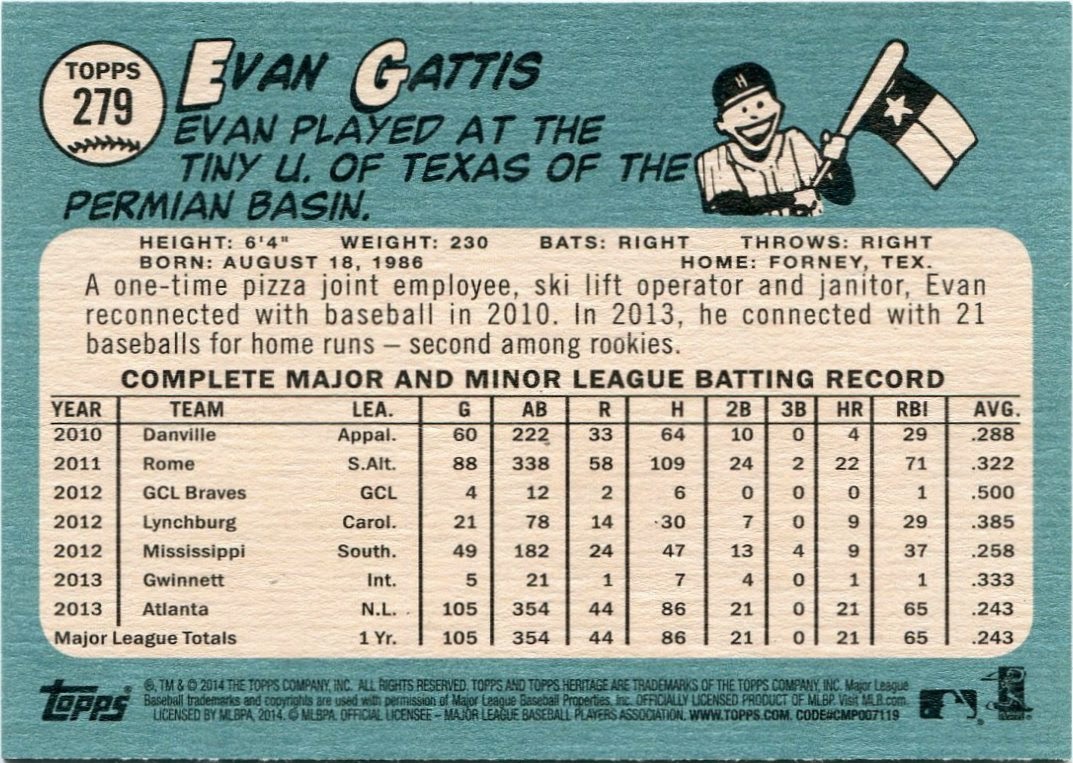 These are flawless as well.

Aside from all the jibber-jabber at the bottom, I probably couldn't tell the difference between Heritage and the original backs.

I give Topps a whole lot of props for that. 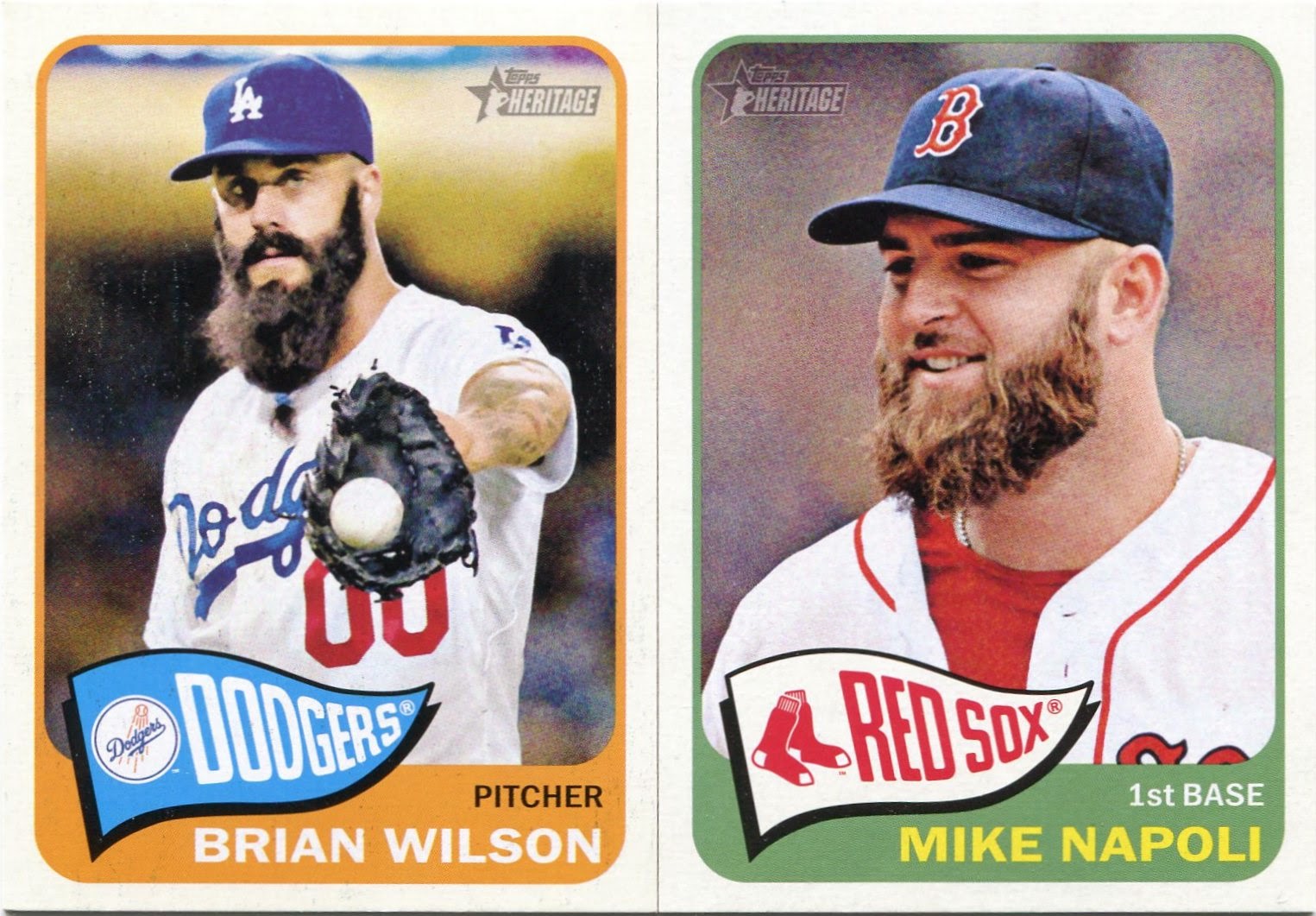 As you'll see in a bit, this year's Heritage is extremely beard-heavy. I'm on board with the menacing facial hair, but fuzz like this didn't exist in 1965.

Not on big league ballplayers, anyways. 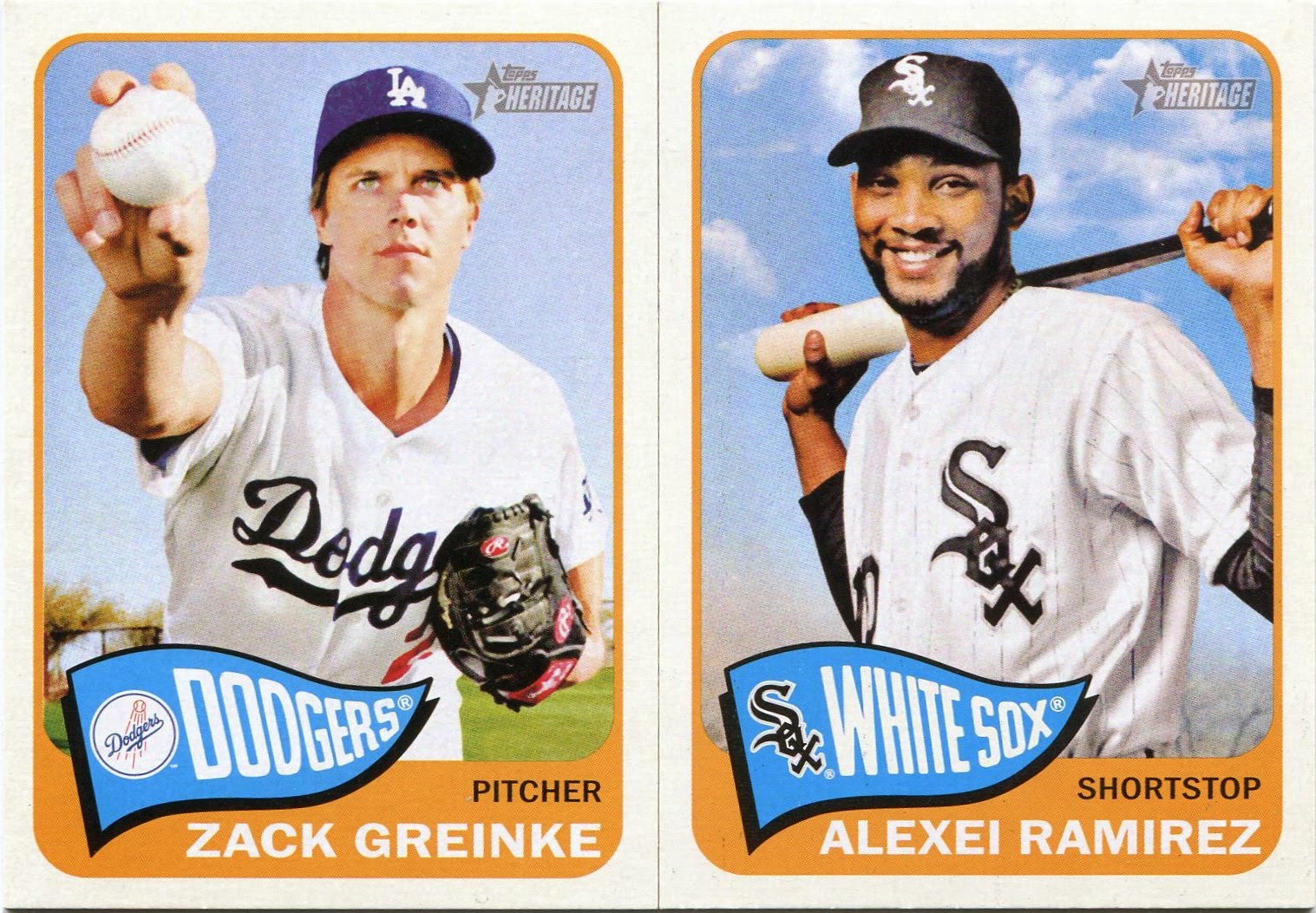 It was an absolute treat to go through every single Heritage base card I needed in one sitting.

I've never done that before. I usually bust a few packs here and there and then trade for the rest. Because of that sporadic accumulation, it sometimes takes me a while to fully absorb a lot of sets.

Not this time, though. After a few travels through my budding stack of Heritage and repeated viewings of beauties like Greinke and Ramirez, I know exactly where I stand with this set. And I have no reservations about saying the following.

For the first time since (probably) 2008, I think 2014 Heritage is better than this year's Flagship release.

There's no doubt about it.

With that in mind, let's close out this Heritage recap with... 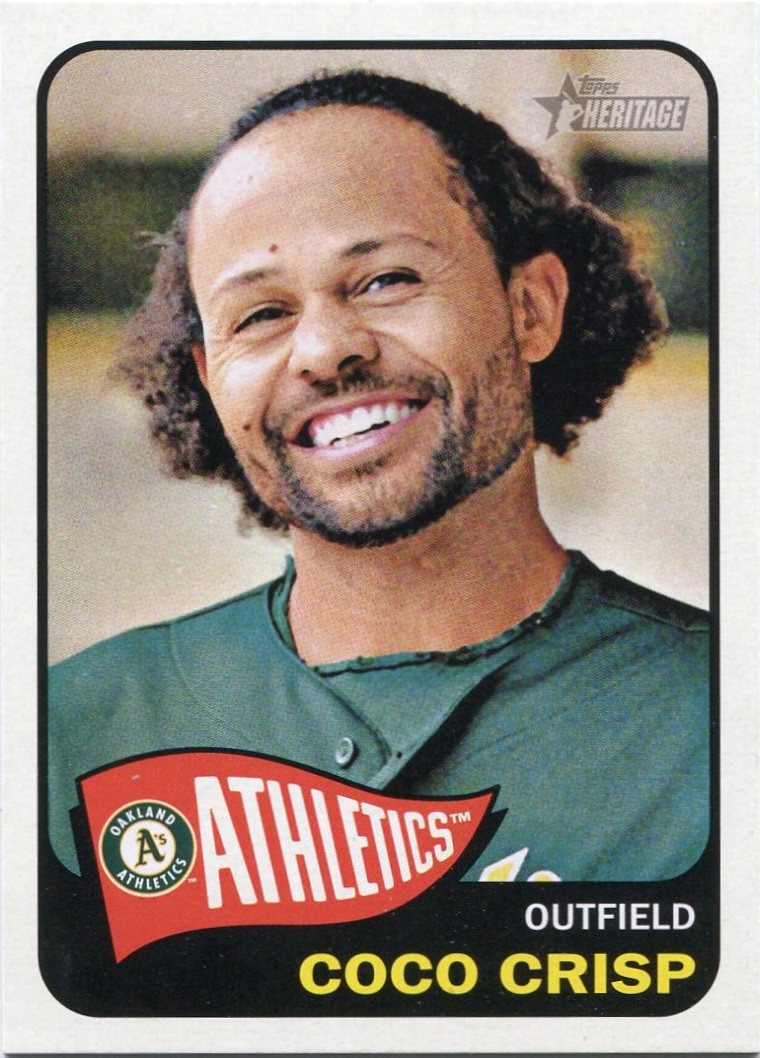 Yes, sir. With every Heritage card I needed in hand, I knew from the start that I'd have to make one of these.

More specifically, we'll be counting down my personal "Top Five from 2014 Topps Heritage".

An honorable mention goes to Coco Crisp and his flattened-out 'fro.

He just missed the top five. 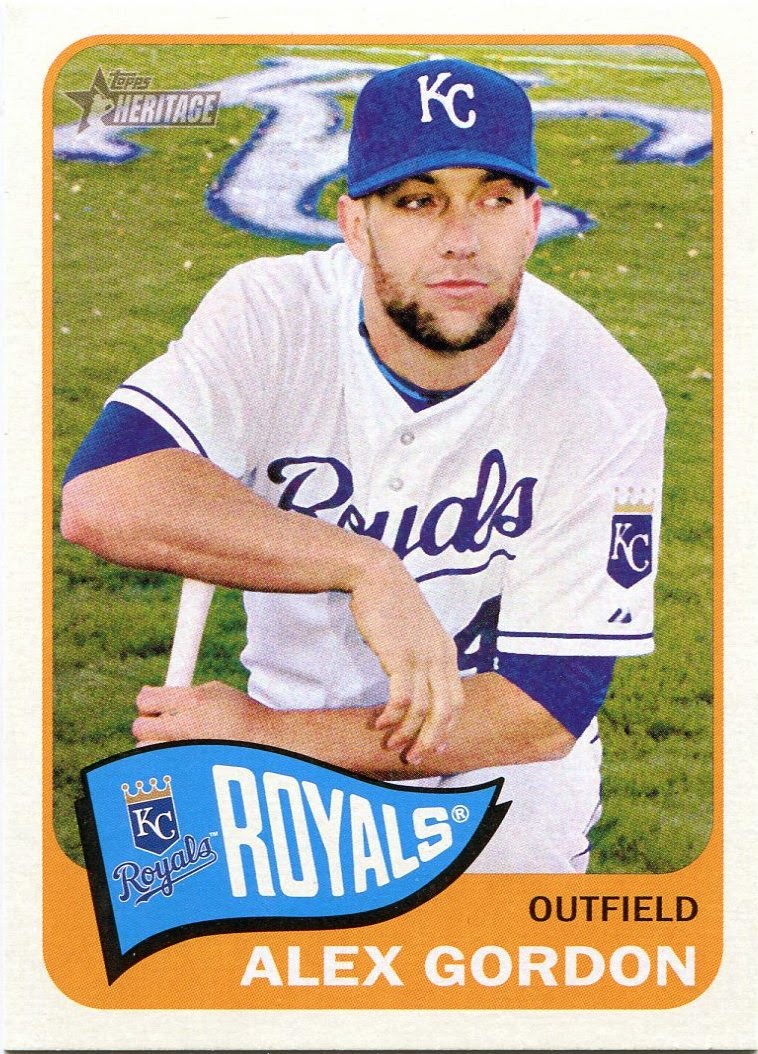 This was the dark horse candidate for my Heritage countdown.

I wasn't that taken with Mr. Gordon when I first pulled him from the guy's extra singles. Upon more and more viewings, though, I came to love this card.

That big "KC" in the backdrop couldn't have been framed any better. 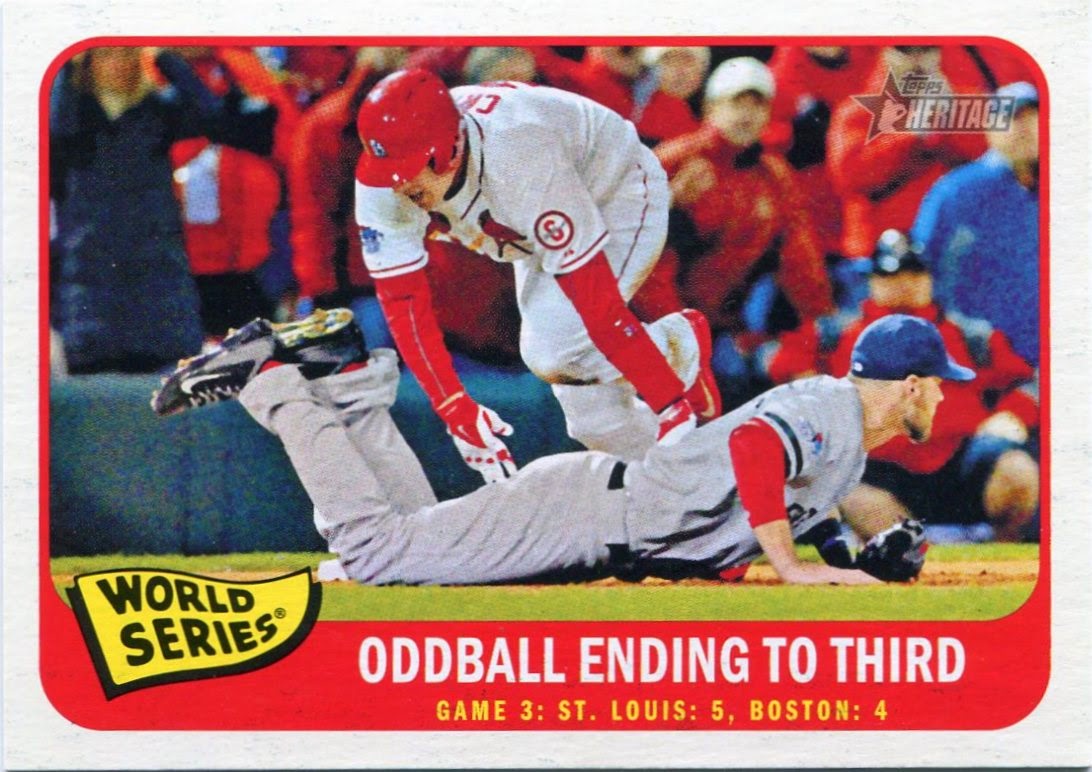 As I said before, Topps knocked it out of the park with this year's World Series subset.

Since the 2013 Fall Classic was among the better clashes in recent history, I guess that's fitting. Game 3 certainly had the craziest ending to any game I've ever seen.

Though I was the only one in the room at the time, I still found myself yelling "INTERFERENCE?!?!" at the TV when this play went down.

Topps perfectly captured one of the wildest moments in World Series history with this beauty. 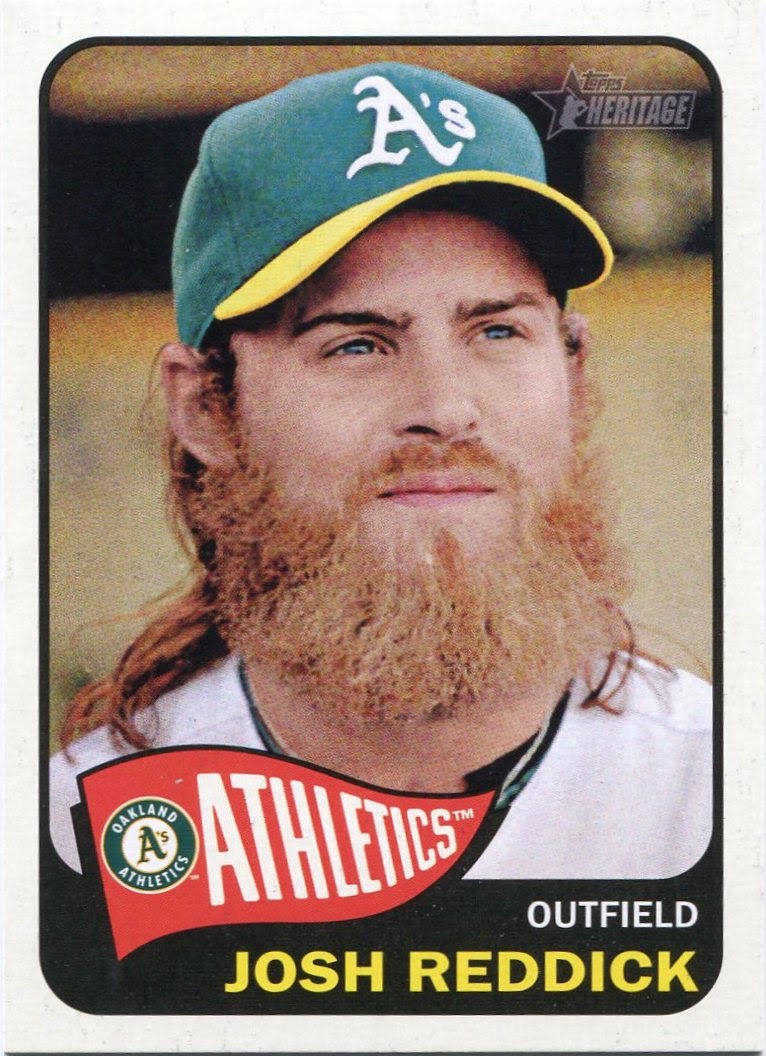 I'm a little surprised we hadn't seen a card of "birthday boy" Josh Reddick with a full beard yet.

Thankfully, Heritage was there to fill that void.

Like I already said, this year's checklist was very beard-centric. 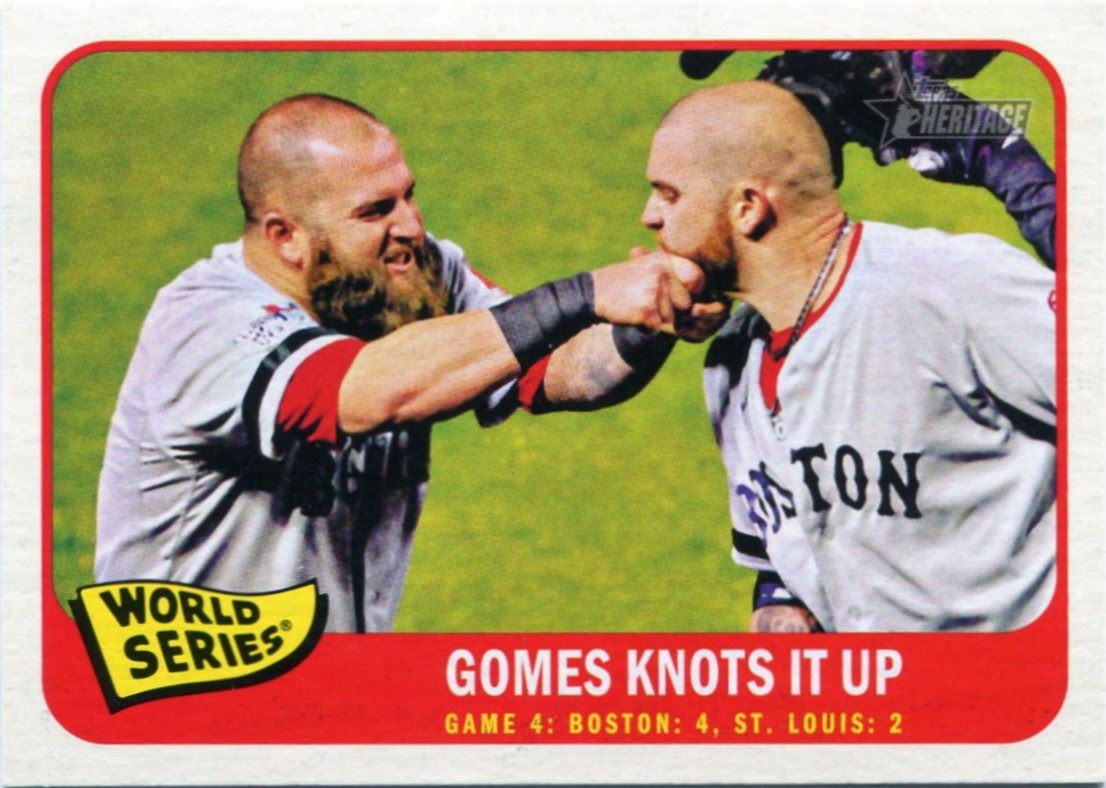 Try this one on for size, then.

Looking back, 2013 was a very beard-crazy season for baseball. After all was said and done, the team with the so-called "Magic Beards" wound up winning it all.

I've never grown or tried to grow facial hair in my life, but I'd imagine someone pulling on it must not feel too pleasant. Nevertheless, the Red Sox did so whenever one of the bearded ones popped a homer.

Here's Mike Napoli giving the facial hair of Jonny Gomes a nice tug after his crucial homer in Game 4.

In any other year, this one might've taken home top honors. 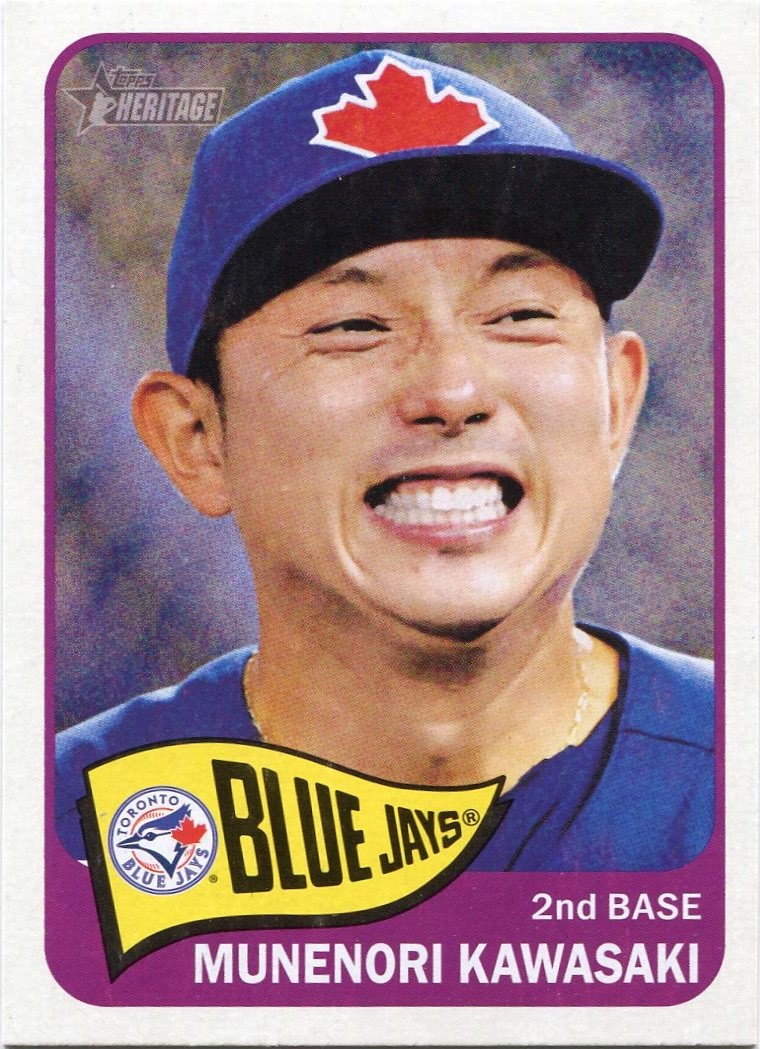 Though last year was Munenori Kawasaki's second big league season, Topps had yet to issue a card of the energetic fan favorite. I was quite pissed off about that.

Come on, Topps. You can grant not two, but three spots in a checklist to a guy like Puig in, but giving one to a guy like Kawasaki is out of the question? What kind of crap is that? How can you even begin...

I let bygones be bygones as soon as I saw this card.

It may have come about a year too late, but this is a perfect cardboard debut for Mr. Kawasaki.

Everything you need to know about the fun-loving infielder is summed up in this shot alone.

We can be friends again now.
Posted by Nick at 6:43 PM

Oh my goodness, I have to get one of those Kawasakis.

Can't wait to look at these things. Still in cover-my-eyes mode, though. I've only opened three packs so far, but I love 'em. The logo thing bugs me, but I'll get over it. I can tell that I dig this year's Heritage about 50 times better than last year's.