2014 Topps Opening Day: Fresh out of the box 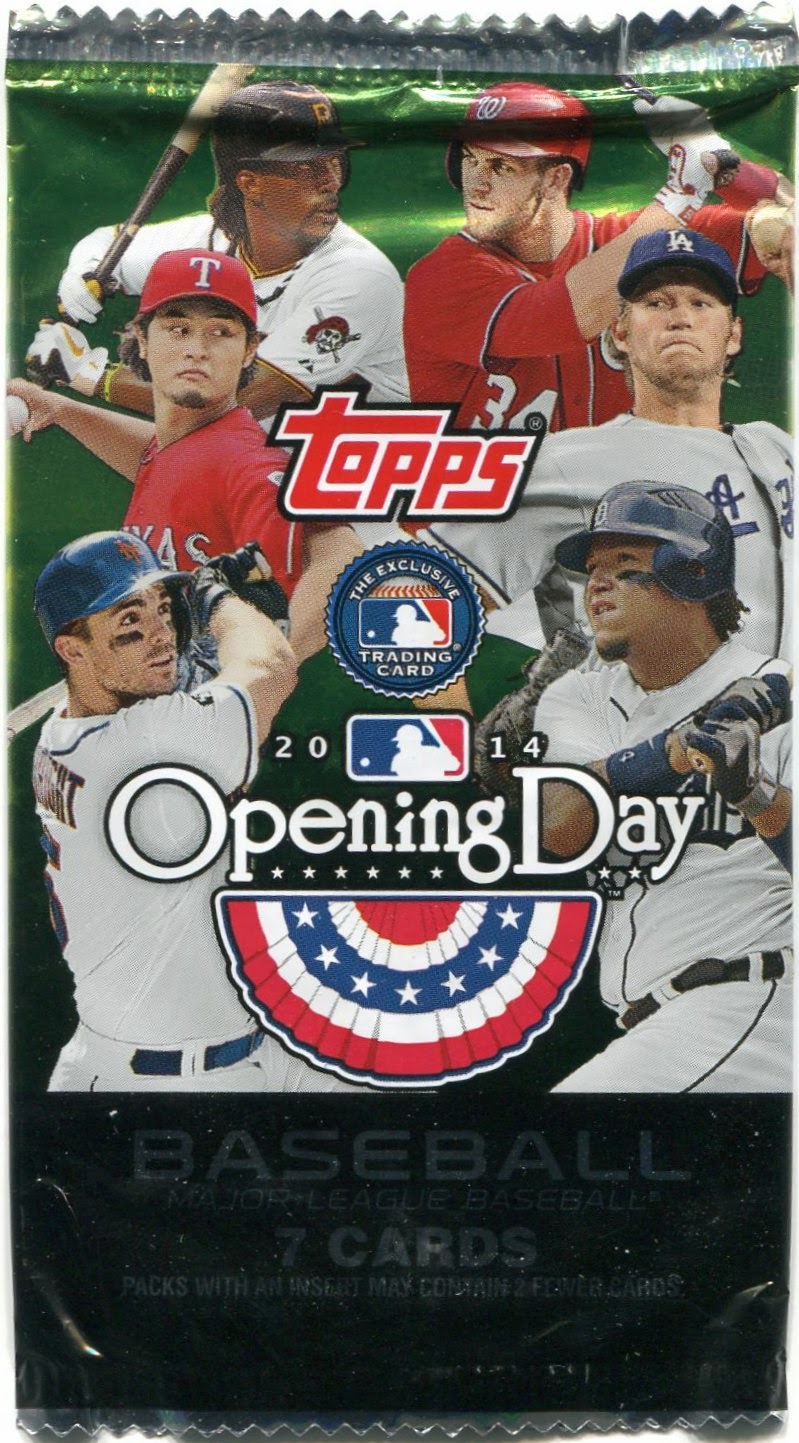 You people and your Heritage.

All I've been reading this whole week is Heritage this and Heritage that. As of right now, Heritage is the mainstream of baseball cards.

I'm not a mainstream type of guy. That's why I picked up a blaster of Opening Day yesterday. I mean, with all this Heritage talk...

Okay. I'm going to level with you.

I wanted to be a mainstream Heritage guy. I walked into my local Target yesterday hoping to find some of it. I'm more excited about this year's Heritage than I've been in a long time.

Sadly, Heritage was MIA last afternoon. My dad and I saw a couple unopened cardboard boxes next to the card aisle that supposedly had new product in them. I'm betting Heritage was in one of those boxes, but the employees down at Target didn't bother/were too lazy to actually put them on the shelves.

We were about to walk away empty-handed when we noticed that one of the boxes was open. A quick peek inside featured a healthy sampling of 2014 Topps Opening Day blasters. To be honest, I didn't even know Opening Day was out. I was too caught up in the Heritage hailstorm.

With 11 packs for just ten bucks, though, Opening Day is always good for some cheap fun. Though they weren't actually on the shelves yet, my dad and I picked one of the blasters fresh out of the box and brought it up to the counter.

While the rest of the cardboard community might be going through a Heritage frenzy, I'm happy to bring you a pack-by-pack account of my 2014 Topps Opening Day blaster. 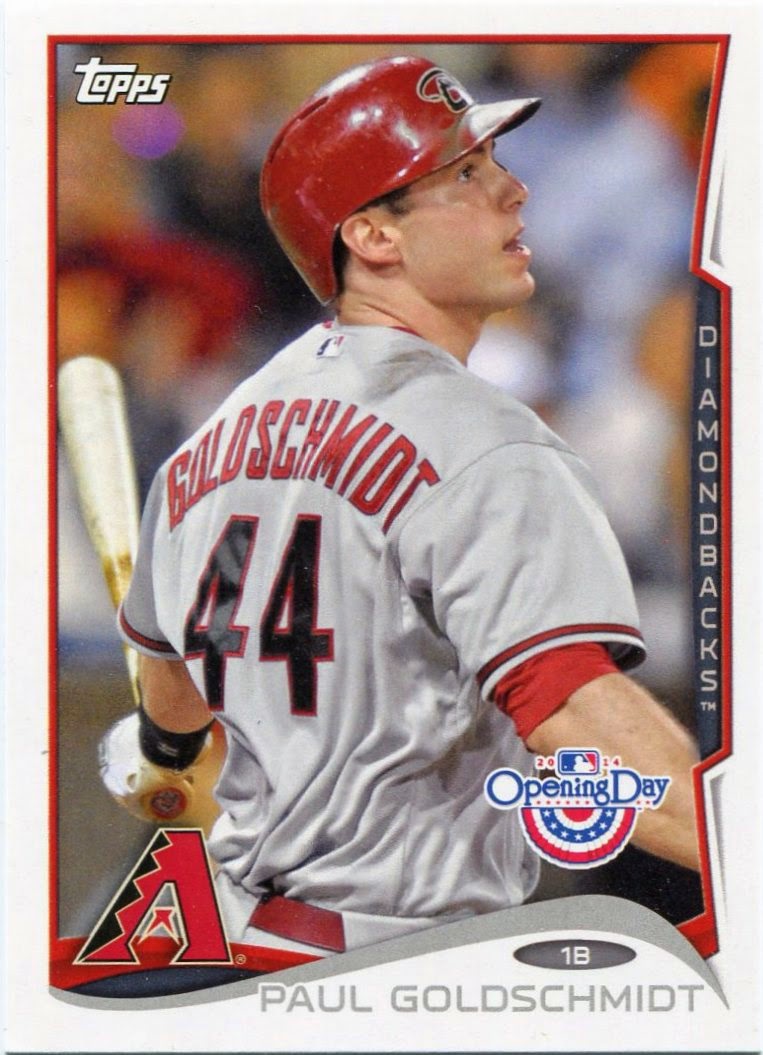 Let it be known that the very first card I pulled out of this blaster was the Paul Goldschmidt you see above.

Since I collect "Goldy", it was a fine start.

While the packs may be cheap, the one big downside to Opening Day is the fact that a lot of the set basically consists of foil-less Series 1 reprints. Though the Flagship/OD combo does look nice in a binder, it's like pulling the same card all over again.

At 99 cents a pack, though, I guess I can't complain all that much. 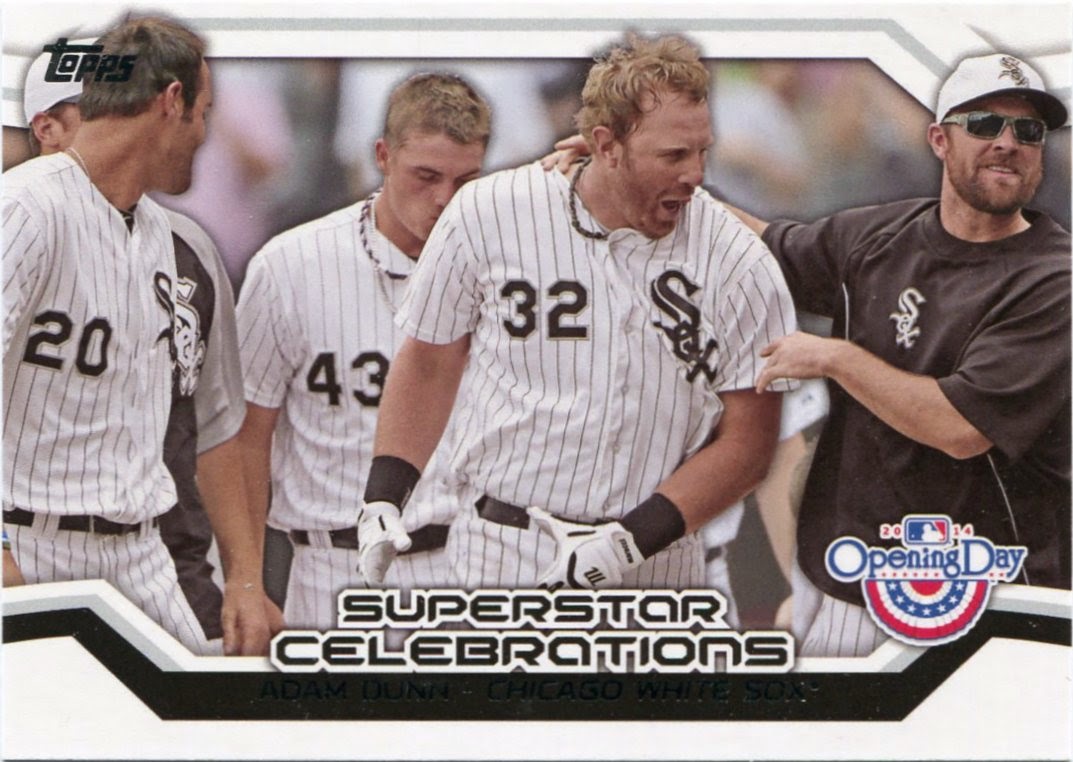 I don't know if that'll be true again here in 2014. From the looks of it, though, Opening Day is still churning out great inserts this time around.

As evidenced by this terrific Adam Dunn, the long-running "Superstar Celebrations" series has returned for 2014.

By the looks of it, these inserts are better than ever. 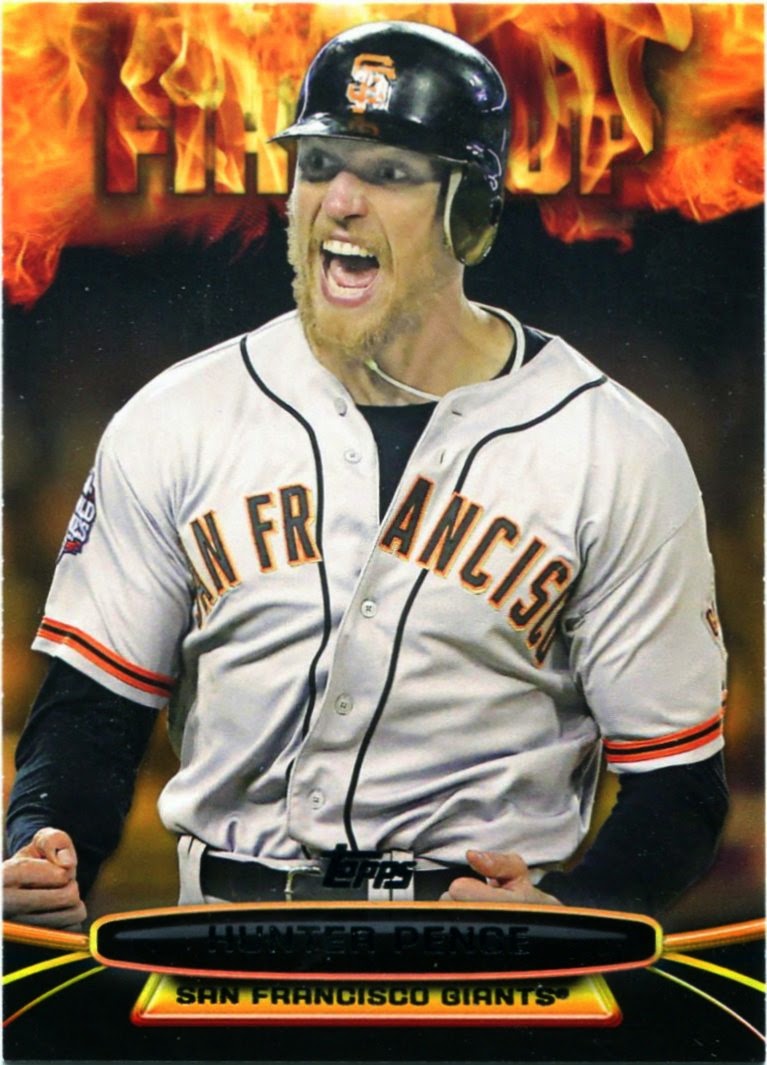 I'm guessing that Topps sought to base this series around some of the more intense players in baseball. The inclusion of Hunter Pence certainly makes sense in that regard.

As far as the cards go, I'm not huge on these. The design is a little too generic and I had a tough time deciphering what the series was even called. It took until the third viewing to figure out that the banner read "Fired Up".

Still, even a mediocre Opening Day insert is better than most other inserts out there. 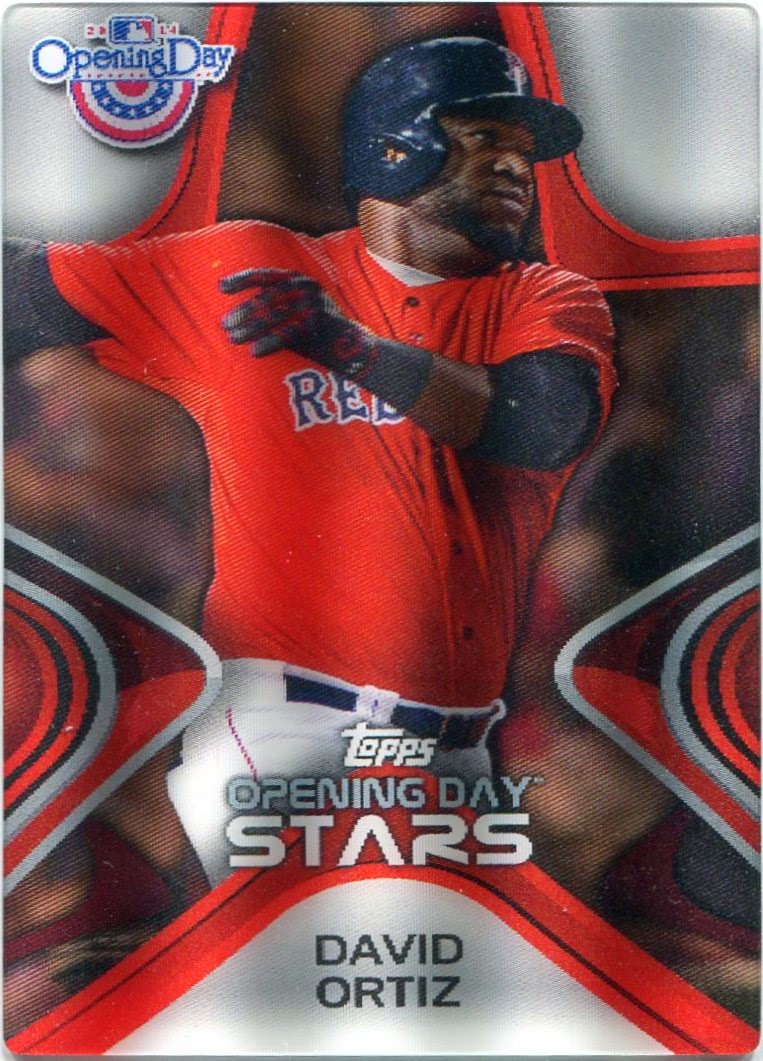 Also returning in 2014 are these "Opening Day Stars" inserts.

I've always felt that today's hobby could use more 3-D cards. This series is about all we have right now, which is why I've always enjoyed them.

I think most of the people who lived through Kellogg's in the '70s can vouch for that. 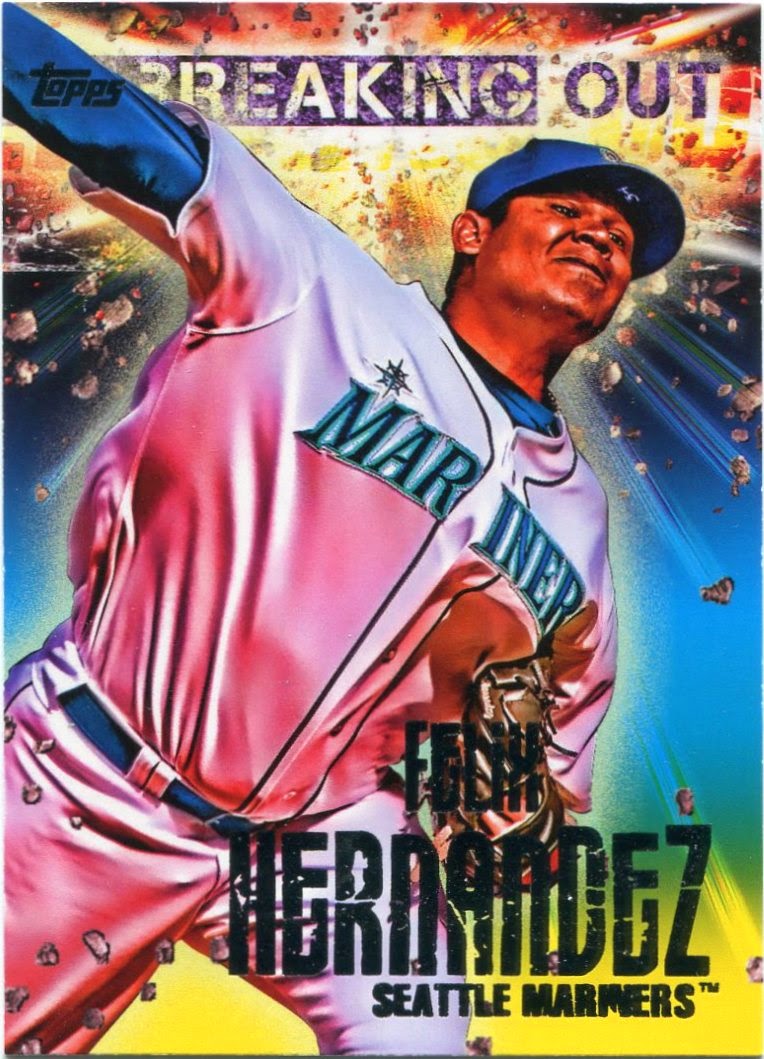 THESE ARE FRIGGIN' AWESOME!!!!

I literally stared at "King Felix" for a good minute after it fell out of this pack. In an era where boring inserts have become the norm, it's good so see so much beauty and creativity out of this "Breaking Out" series.

In fact, I think I spy every color of the rainbow. 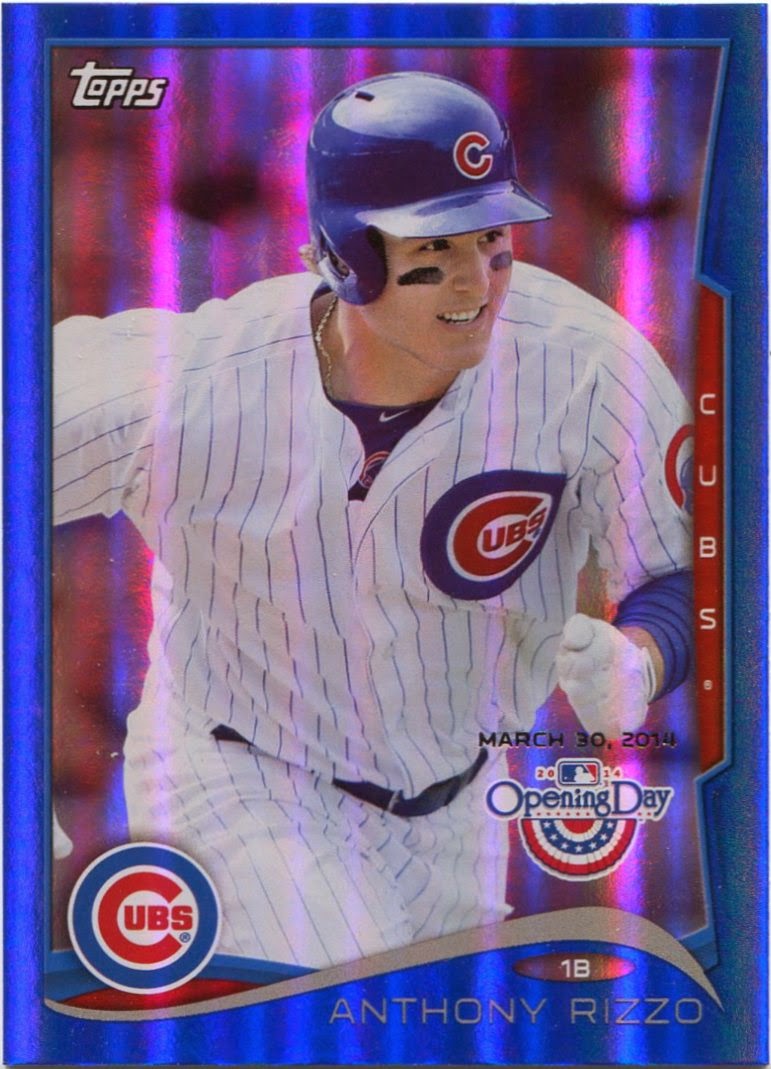 Just after I pulled Mr. Rizzo's base card out of pack #3, I was lucky enough to get his blue beauty out of the very next pack.

Like last year, sequentially-numbered blue parallels are found in 2014 Opening Day. I think they work really well with this year's design.

It works even better next to the hallowed Cubbie Blue. 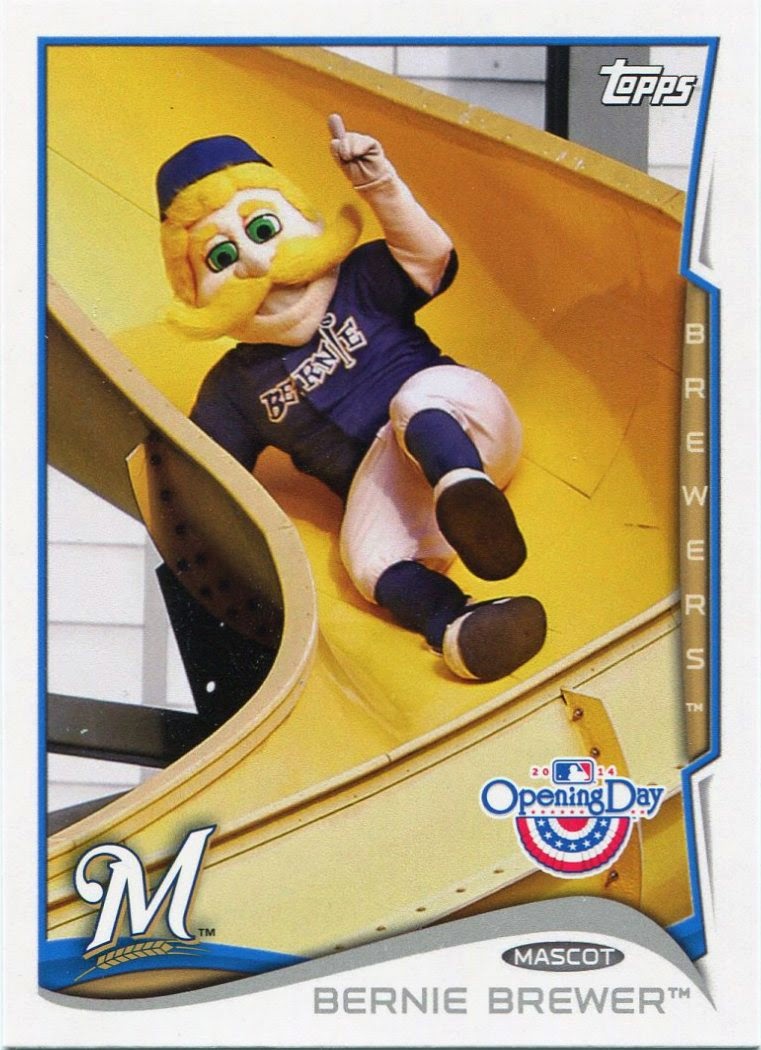 Still, I guess it's nice that a fun set honors their existence. Opening Day has been making these mascot inserts for a few years now.

I won't deny that this in-action shot of "Bernie Brewer" is pretty darn cool. 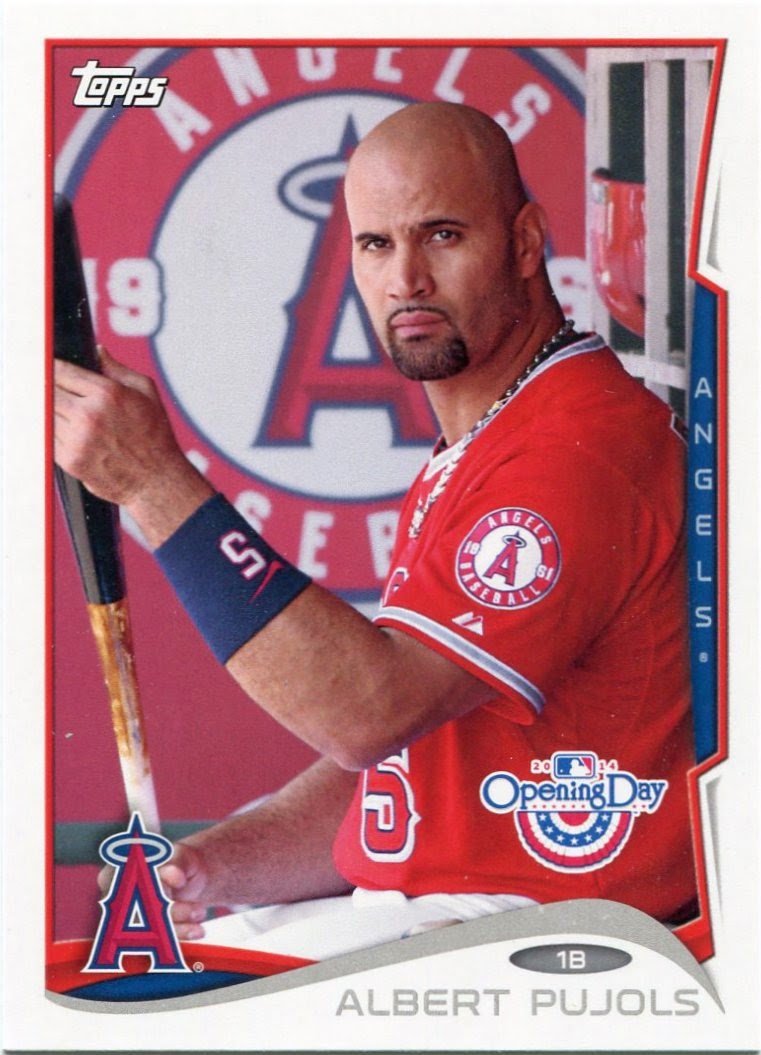 One thing I like about Opening Day is that it often gives a preview into some of the cards we might see in Series 2.

Albert Pujols may have had a down season in 2013, but Topps still rewarded him with a rather neat card this year nonetheless. 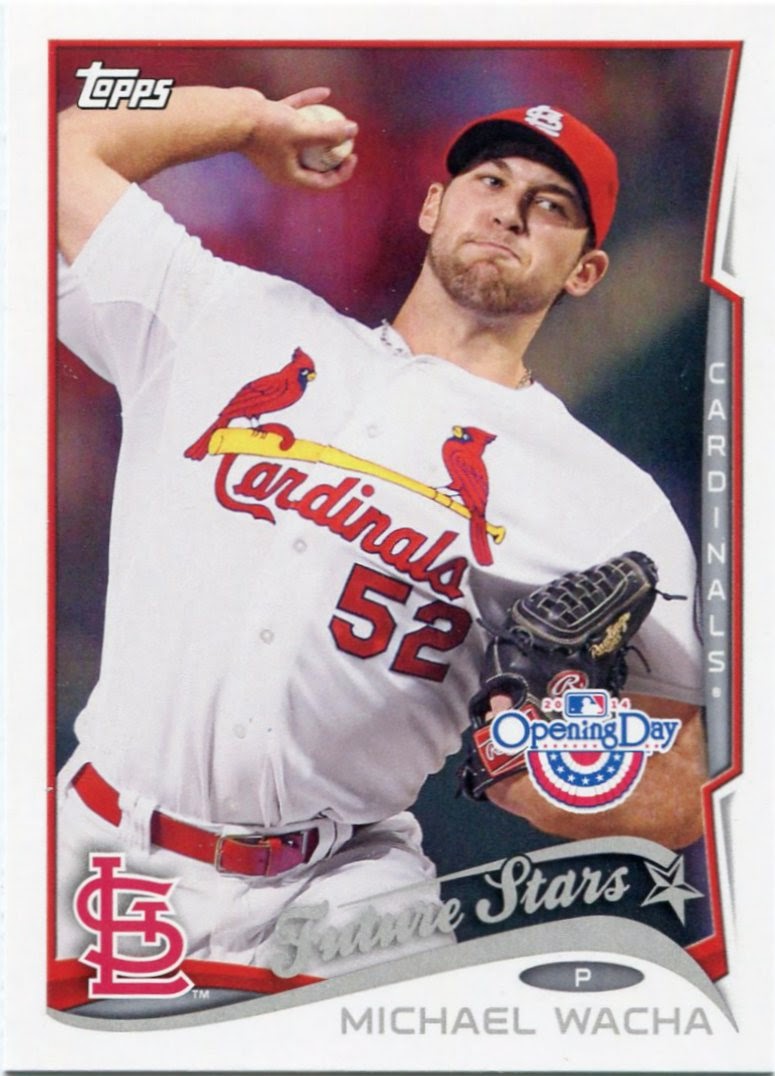 Personally, I like this sans-foil "Future Stars" label more than the ones we saw in Flagship.

I expect nothing but great things from Michael Wacha in 2014. 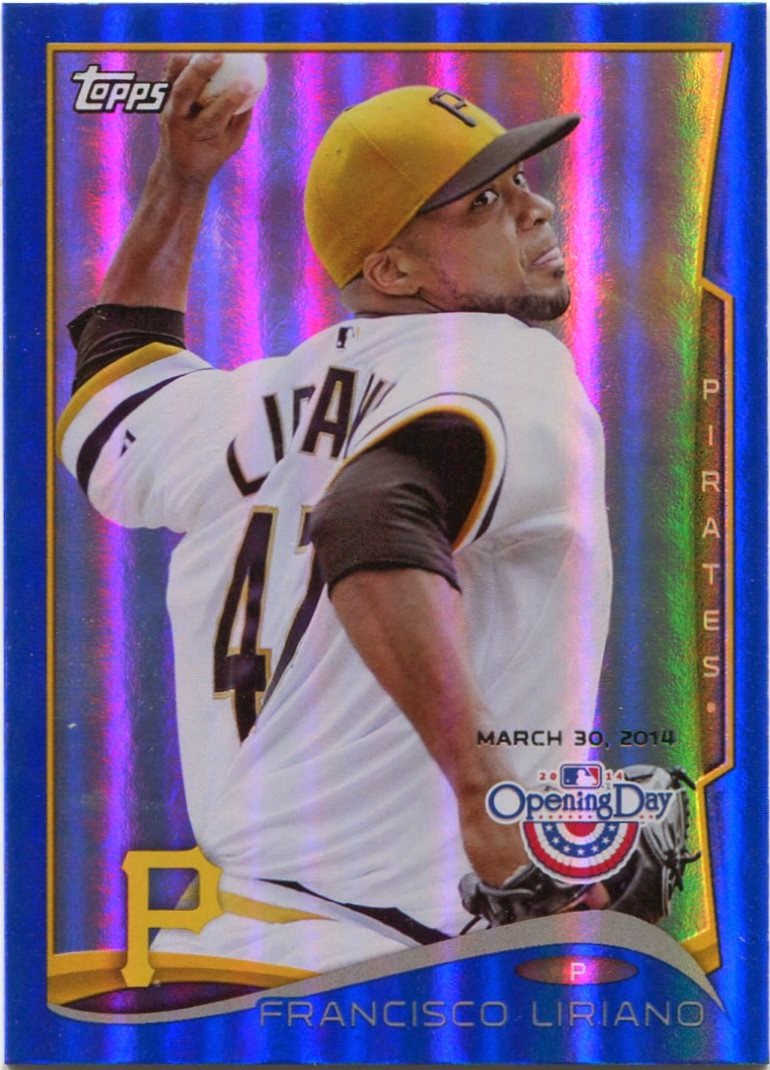 I usually have horrible luck with pulling parallels of guys I actually collect.

Between Rizzo and Liriano, though, we're two for three so far. 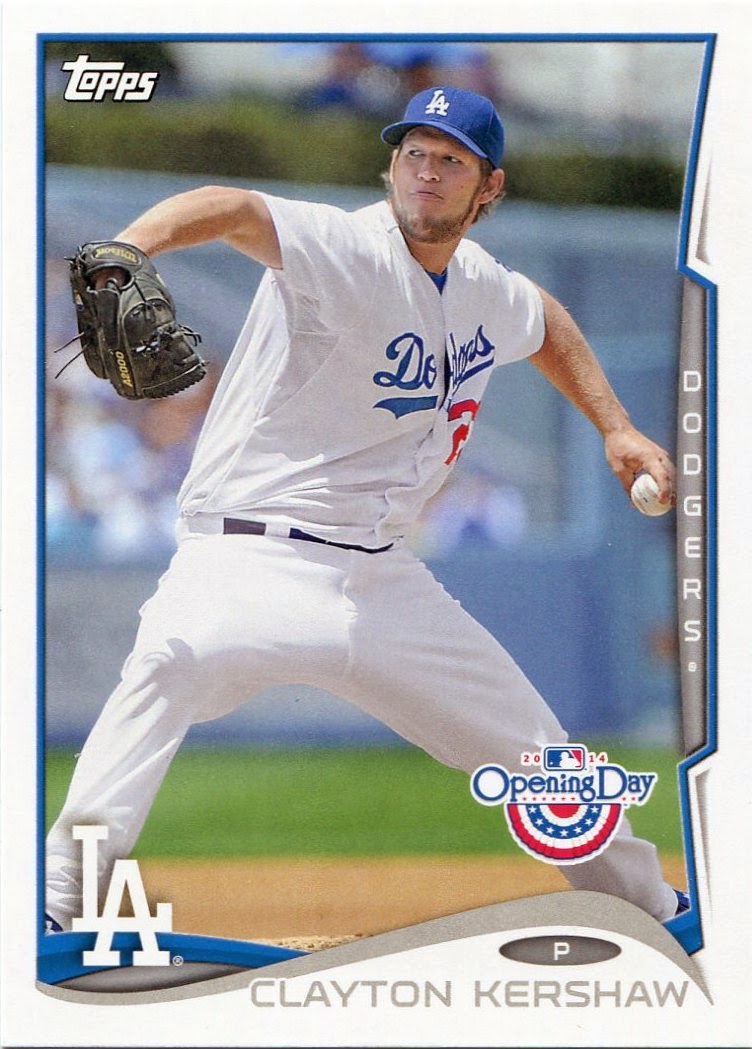 I would think a reigning Cy Young winner deserves a better card than this. 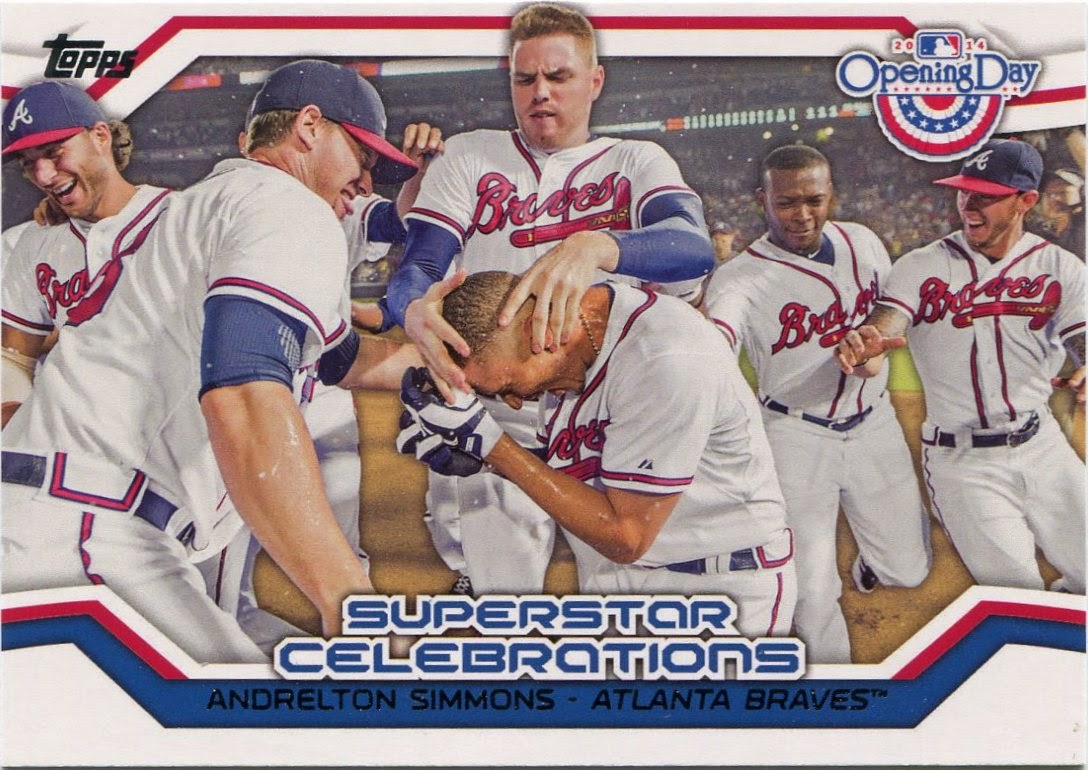 What's better than a celebration shot?

A nighttime celebration shot, of course! 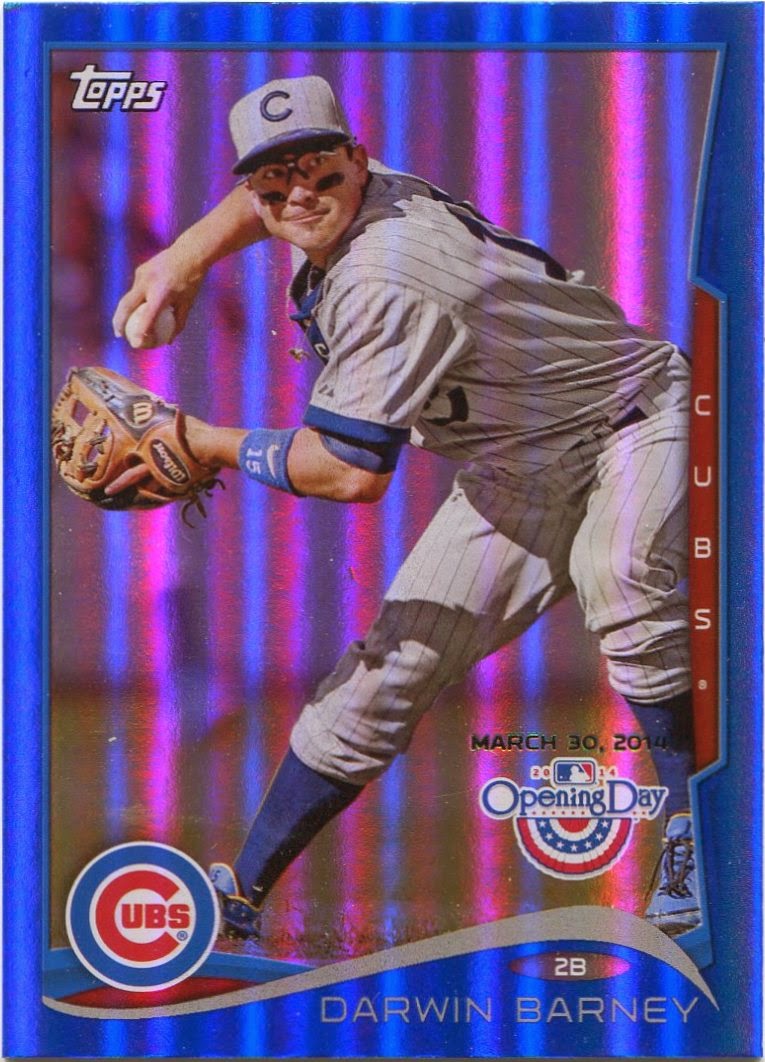 Believe me, this sort of parallel goodness is unprecedented with my pack-busting luck. 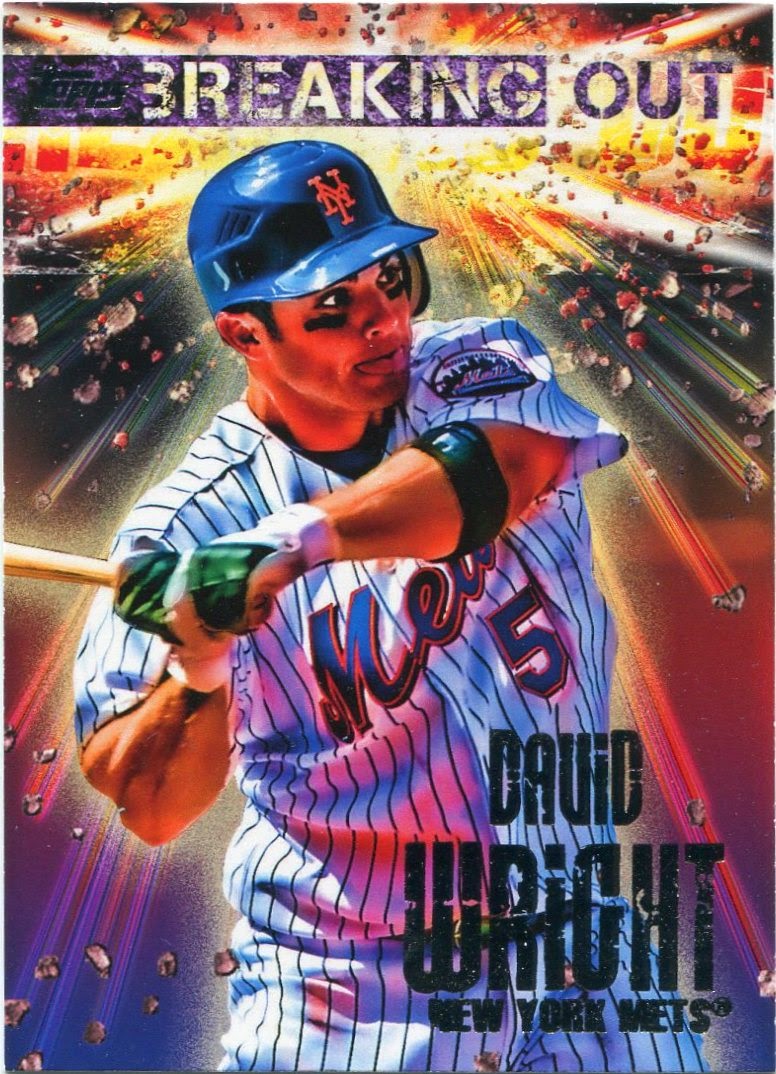 Even better the second time around. 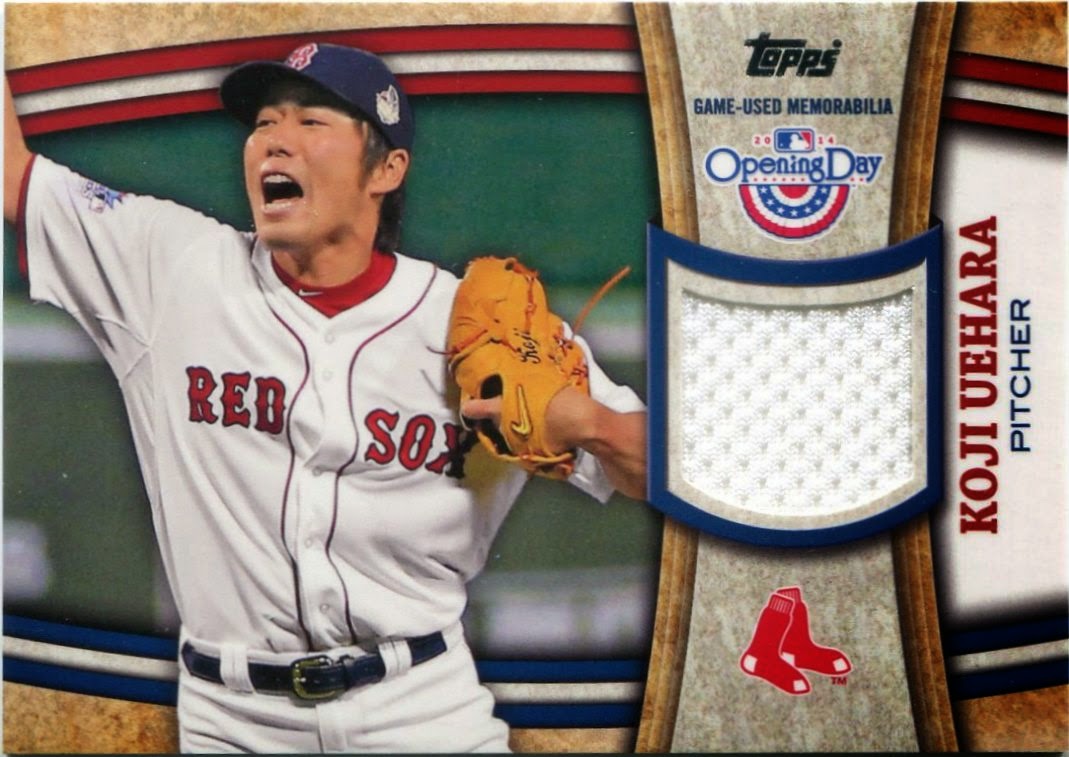 This was certainly an unexpected pull.

I doubt many people open Opening Day for the memorabilia. It's about as far from high-end as you'll find.

But, against all odds, I landed a relic of postseason hero Koji Uehara from this pack. I can't imagine he has too many jersey cards out there.

If he needs it, this one will probably be going to Mr. Mark Hoyle, a generous reader and Red Sox collector who has sent me all kinds of good stuff already.

It's the least I could do.

Because of the relic, this pack only contained five cards. 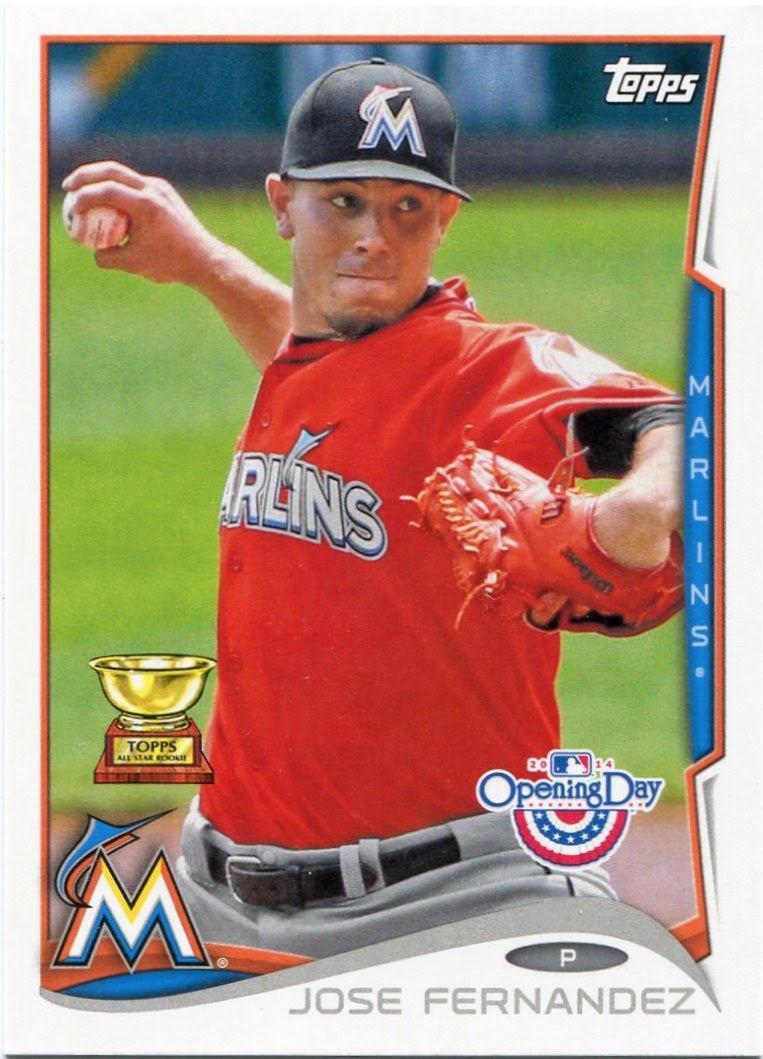 Much like Mr. Kershaw, I hoped that an ace like Jose Fernandez would receive a better card in 2014.

Like a lot of collectors, I'm starting to get tired of all these generic pitching shots.

That said, it's hard to get mad at any card that features the hallowed Rookie Cup. 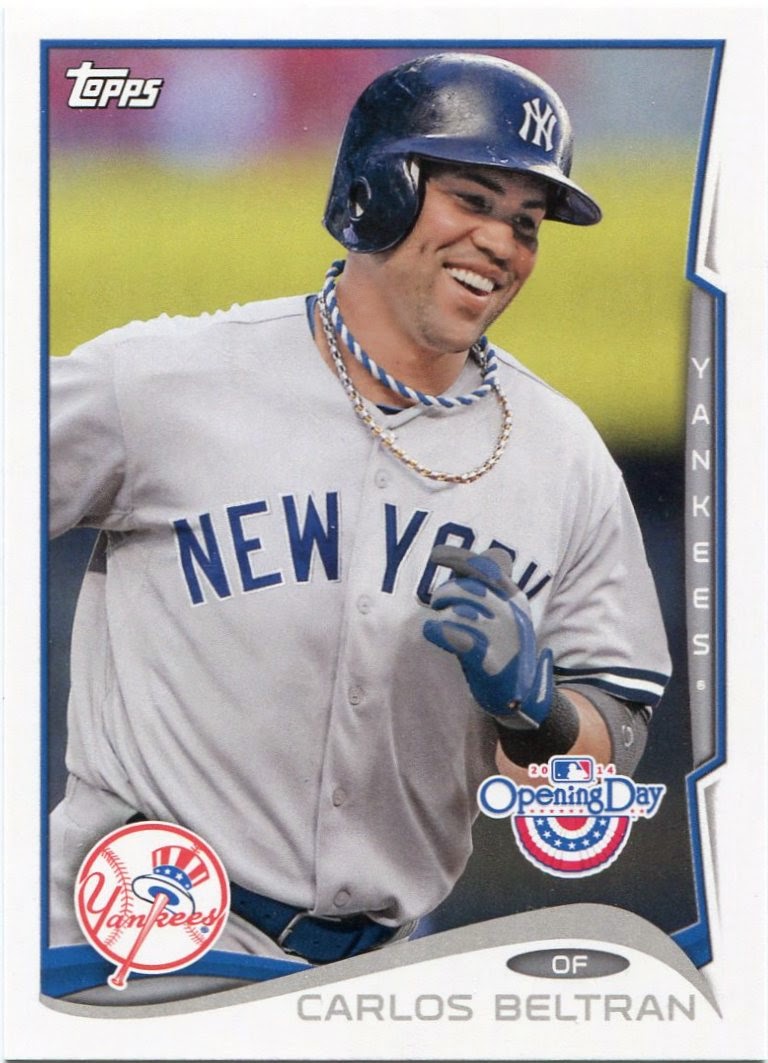 The final card from this blaster represents one of Opening Day's finest features.

For the fast few years, OD has been responsible for producing the very first cards of big offseason signings/trades in their new uniforms.

It's all thanks to the magic of photoshopping, which has gotten progressively better over time. (For the most part.)

I'm sure this will be the one of many Carlos Beltran cards that I'll be adding to my Yankee binder this year.

Still, Opening Day will always lay claim to being the first.

All in all, that's a pretty nice haul for just ten bucks.

Okay, so maybe Opening Day wasn't my first choice when I walked into my local Target yesterday. It did feel like sort of a consolation prize to Heritage when I walked out the door.

After ripping through this blaster, though, Opening Day has shown yet again that it can compete with the big boys in this hobby.

It doesn't play second fiddle to anybody.
Posted by Nick at 6:27 PM

Nice find! And good pick on the box that netted those Cub parallels.

Ooh, I forgot all about Opening Day. Great blaster overall! Of all the inserts, I think the 3-D cards are still the best.

I'll take any of the Sox that are up for grabs. I have a Goldschmidt 2014 Topps sticker that I'm sending your way.

The Koji is an awesome card.

I bought a bunch of Opening Day last year, and just ended up thinking "Why bother?" It just seems redundant with the base. Its just another money grab by Topps, because they know I'll want the Angels, and the parallels of the Angels...

Ah, man! Another post that I can't look at yet. These are out, huh? Guess I'd better head on over to Target...

I may be alone here but after the somewhat lackluster photography in flagship and the almost always boring photos in Heritage, I am nominating the Bernie Brewer as 2014 Card of the Year. That is just fantastic.

Looks like a nice mix of insert and parallels though the redundant 'reprints' from the flagship set makes Opening Day make them a 'non buy' for me.

If Topps just changed things up with the Opening Day base cards, then maybe I'd try a blaster box or two.

For $10, I guess there is little room to complain.