How the other half lives 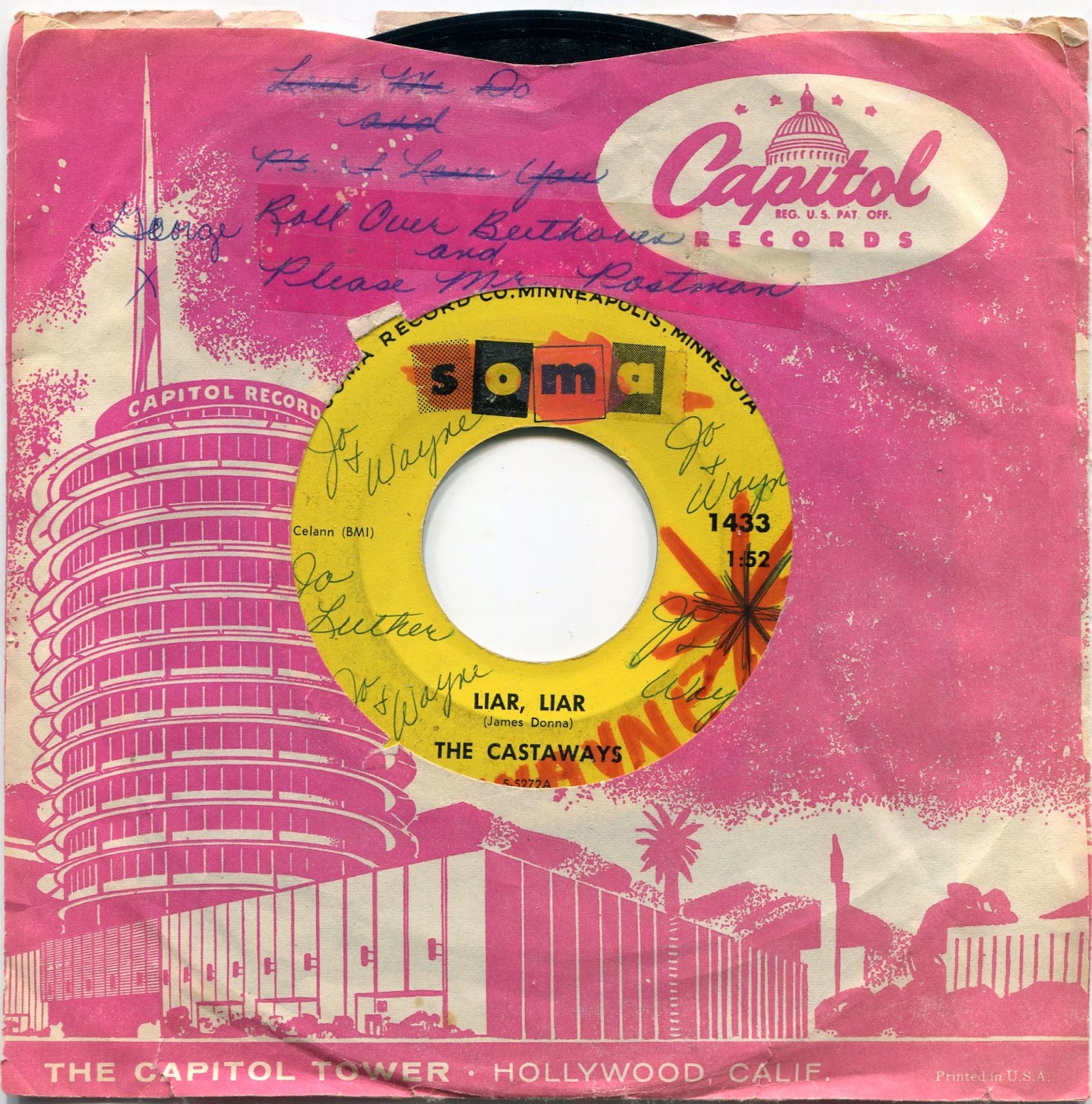 I accompanied my dad to a record show yesterday.

Although I'm a big music fan, I never much dabbled into records.

I picked up a few 45s at the flea market a while back for kicks, but I don't own a record player or anything. (Only now am I noticing that someone wrote down a few Beatles tunes on the sleeve of the single you see above.)

Still, I thought it'd be fun to see how the other half lives. As a card fanatic, I sometimes tend to forget that other types of collectors exist. People collect everything from records, comic books, stamps, coins...the list goes on and on.

My dad actually got a table with a few other collectors, so I was able to experience a show from behind the table for the first time ever. (I'd still like to set up at a card show or flea market sometime.)

Though he did sell a few of his items, the bulk of the day was spent roaming through the aisles of the record show.

Although it was fun, my card-minded self couldn't help but compare it to the many card shows I've attended in the past. 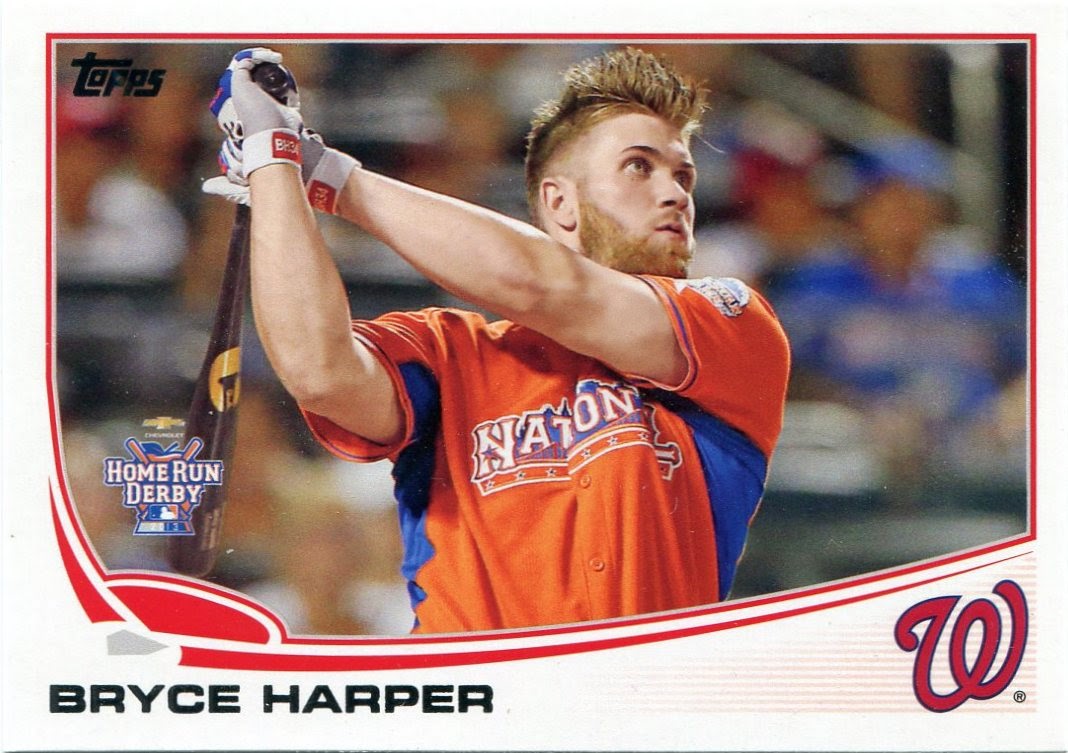 One of the first things I noticed was the crowd demographics.

The show consisted of a couple large hotel convention rooms and had a far larger attendance than I was expecting.

Much like card collecting, the general public seems to assume that record fanatics are all middle-aged and older people. They're wrong.

From what my dad says, record collecting is making a bit of a comeback among my generation. I know a few people my age who dabble in the musical hobby.

That said, I didn't see as many college-age kids at this record gathering than I usually do at card shows. Happily, quite a few 22-somethings such as myself and Bryce Harper gather at card shows these days. (Although you're far more likely to see Harper being paid big bucks to be there.)

Still, it's sure nice to see that people my age are interested in hobbies other than video games. 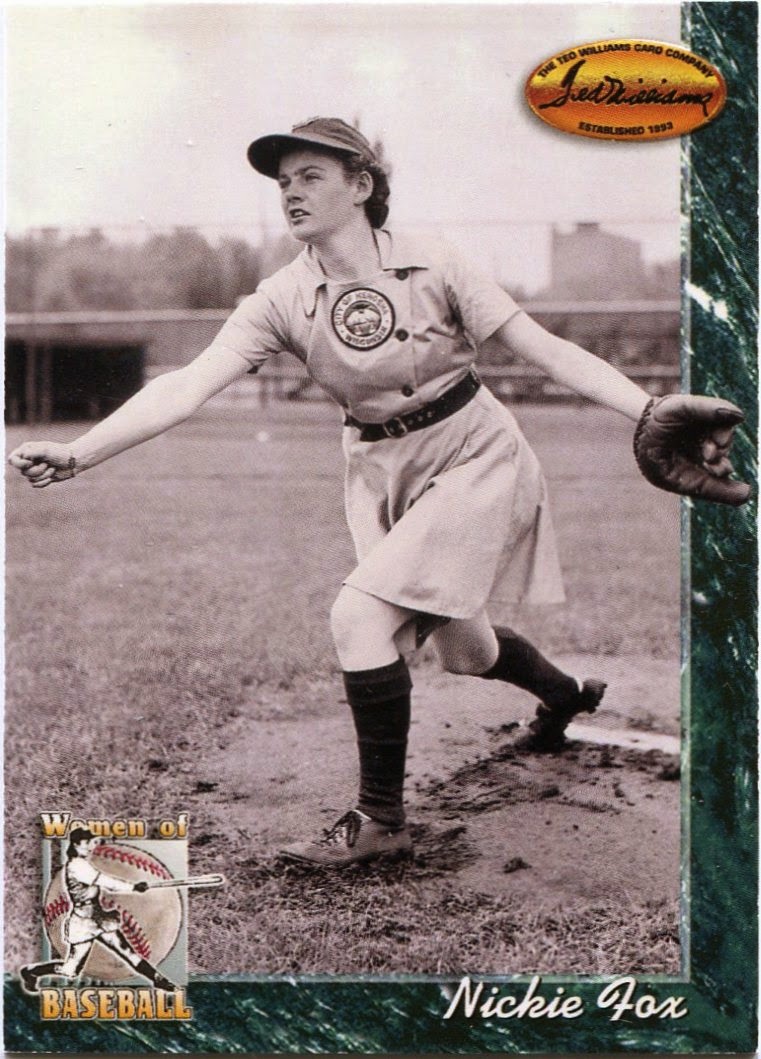 When we go to card shows, my dad and I have a running theme of counting the number of women we see.

More specifically, we count the number of women who aren't being dragged there by their husbands/boyfriends. You can usually tell who is there voluntarily and who isn't by the looks on their faces.

Though there are a decent number of women that collect cards and/or records, there's little denying that both are male-dominated hobbies.

While I may see more college-age kids at card shows, I probably noticed more women at this record show.

By the estimates of mine and my dad's, I think the current record for most women at a card show is around twenty or so.

I know I saw more than that yesterday. 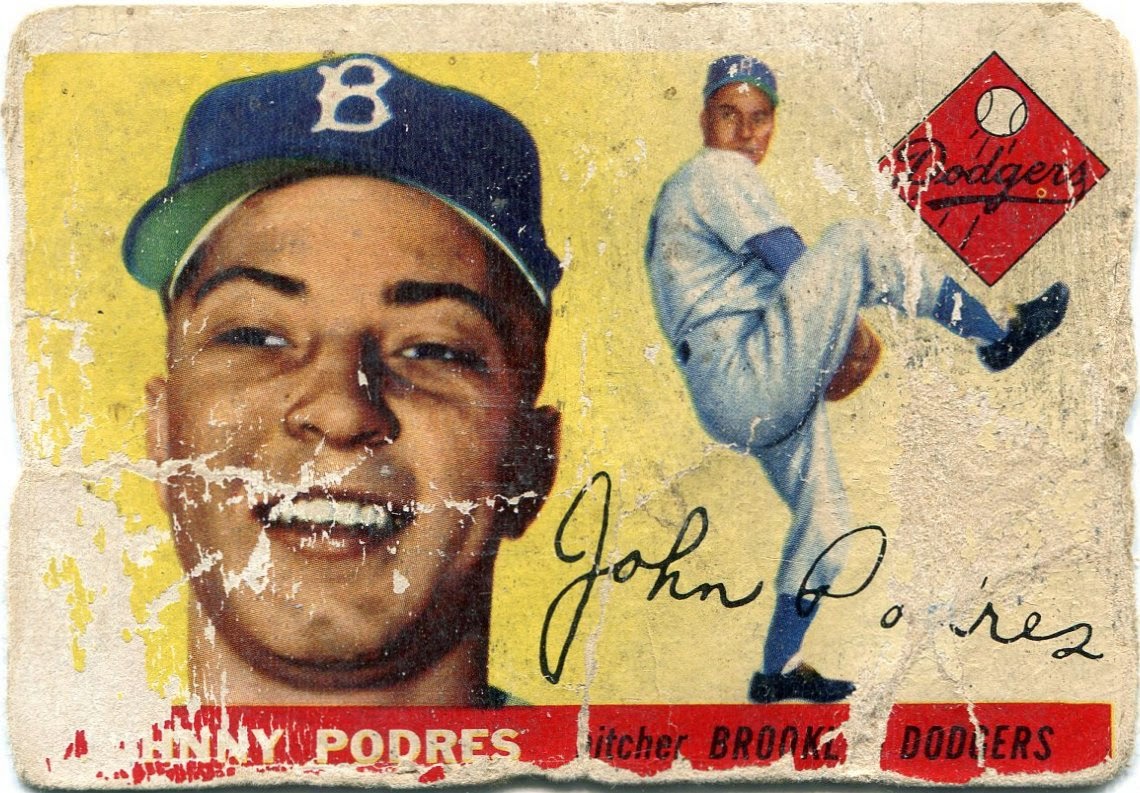 I get that not every collector can be as apathetic as I am towards condition.

Not everyone is going to jump at the chance to own a mangled 1955 Topps Johnny Podres like the one that's in my collection. I totally appreciate and understand that.

To me, though, there's a certain point where the obsession over condition gets ridiculous. I've seen quite a few people bickering over the slightest corner chip or off-centeredness at card shows over the years, then trying to convince the vendor that their price is wrong and rolling their eyes when they refuse to change the price.

According to my dad, it's no different when it comes to record collecting. Like me and my cards, the condition of his records doesn't much matter to him. It's an attitude that he's passed down to me over the years.

And, yes, I saw people holding records up to the light and meticulously examining record sleeves for minutes on end, trying to notice the slightest flaws.

Maybe it's just me, but things like that make the hobby seem like more of a chore than anything. 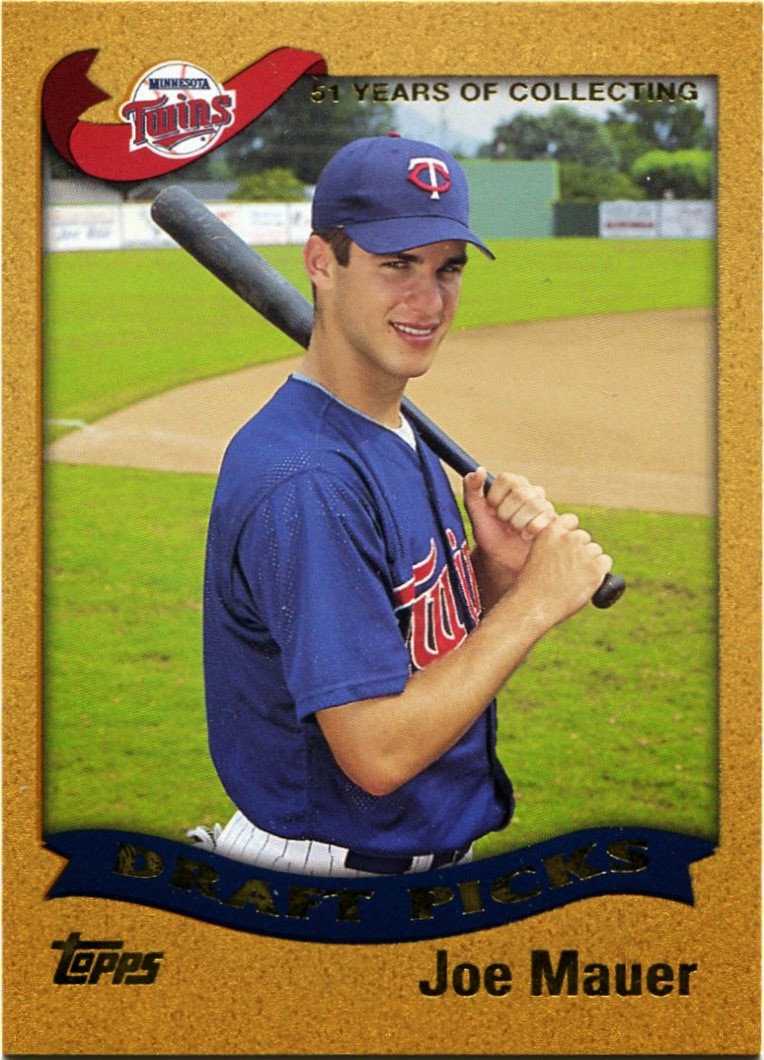 The vast majority of tables at most card shows are usually oriented towards higher-end cardboard.

I know it may seem like shows around here have dime boxes as far as the eye can see. But, in reality, they often make up a small percentage of the whole.

Most of the tables make their profits through Derek Jeter autographs or Joe Mauer rookies. (I guess I can't judge, though, because I have a serial-numbered Mauer rookie in my collection.)

I didn't really get that feeling at yesterday's record show. Sure, there were a few people trying to sell their rare Beatles or Buddy Holly albums for a few hundred bucks, but it seems like most of the tables had at least a few cheaper records available.

Now, whether they could actually sell those records... 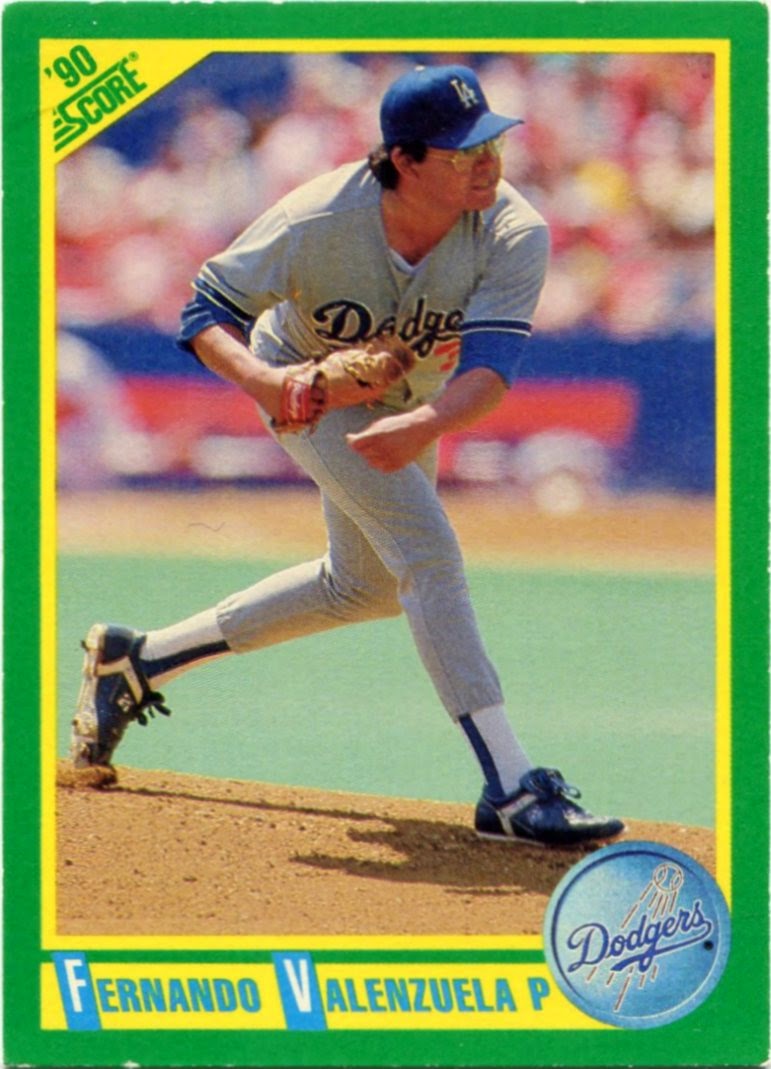 ...is a completely different story.

I can probably go through any dime box and come away with at least a few things I need. Yes, even an all-overproduction era one. I still need some 1990 Score and 1991 Donruss singles, believe it or not.

Record collecting seems to be a lot more specialized. Most people tend to collect certain bands or set genres. I mean, does anyone actually need more Paul Anka albums? 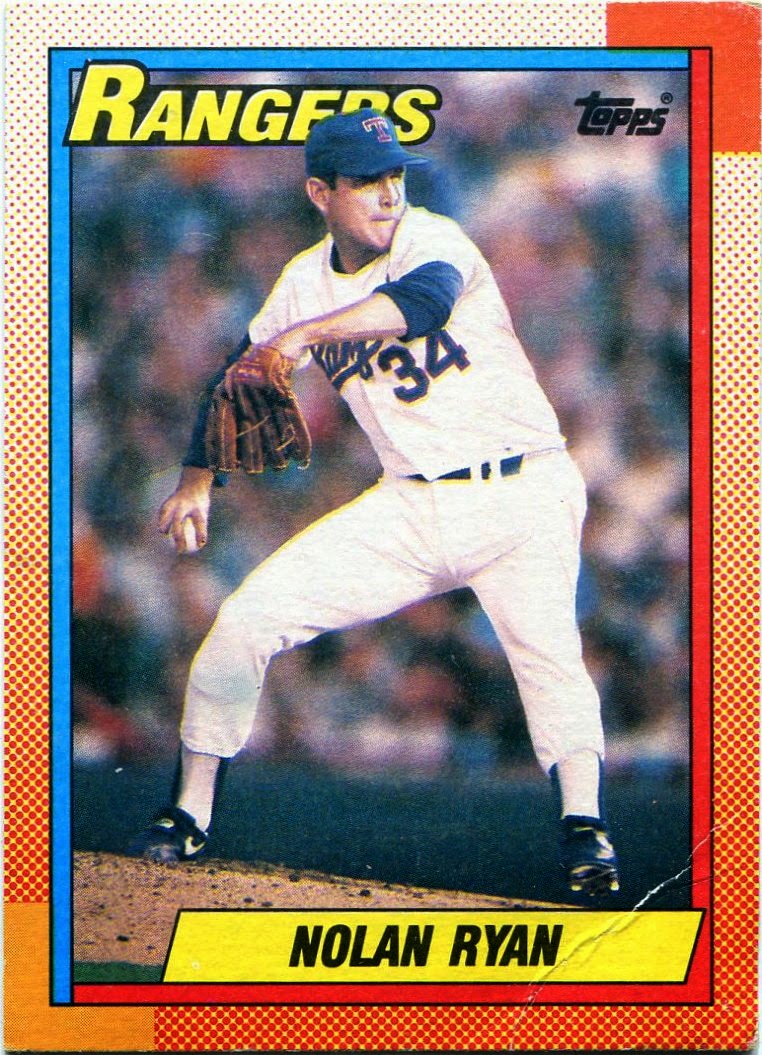 I've never been to a stamp or coin show, but I'd have to believe overpricing is an issue in every hobby.

I'll never forget the time I saw someone trying to hock a 1990 Topps Nolan Ryan in a cheap plaque for 75 bucks at a show. If you've been in the hobby for a while, chances are you've seen overpricing in some way, shape, or form.

My dad and I saw someone trying to sell a copy of Beatles VI for something like 100 bucks. I saw another vendor trying to sell that same album in not much worse shape for four dollars a little later in the day.

From what he says, my dad sees old Replacements or Husker Du albums that could've been had for couple bucks back in the day selling for twenty or thirty dollars now.

Overpricing used to tick me off a lot more. I mean, how could anyone expect to get five bucks for that 1991 Topps Ozzie Smith?! What, are they crazy or something?!

These days, it doesn't bother me so much. Let people charge what they want for their stuff.

Whether they get it or not is their problem. 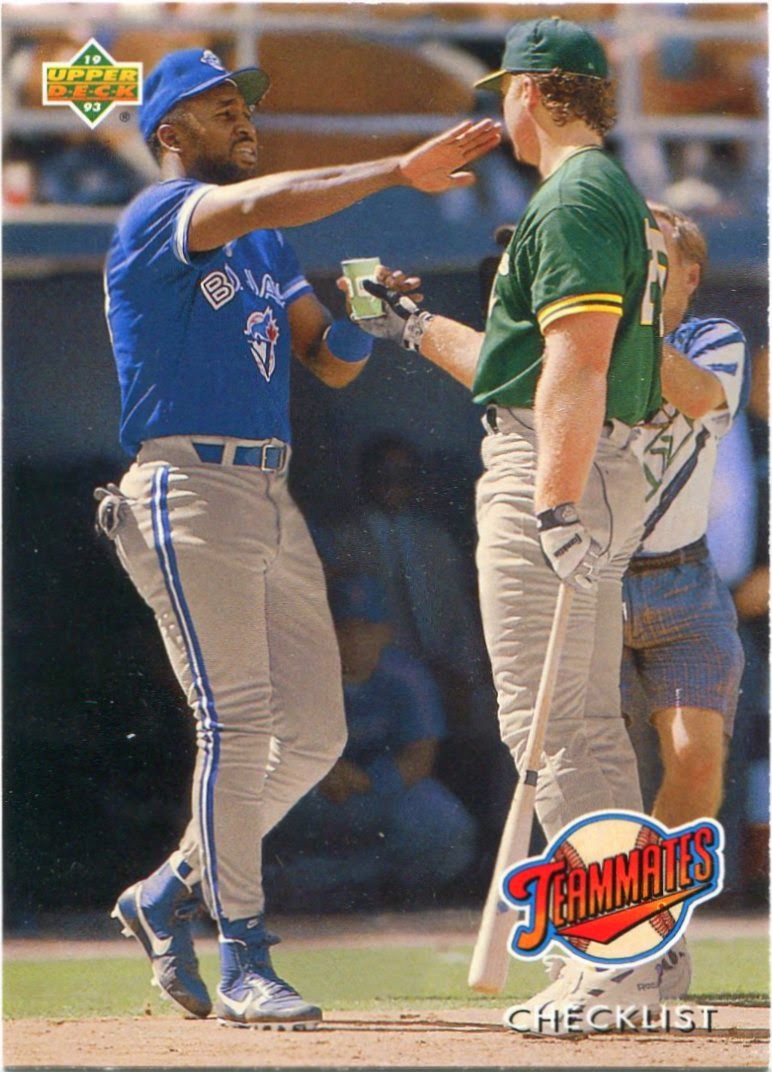 I'm happy to report that record show vendors are just as nice as I've seen at past card shows.

Though you might run into a bad egg every once in a while, the vast majority of cardboard vendors I've dealt with have been nothing short of awesome.

Although that may be due to the fact that I don't usually deal with the money hungry high-end people, I like to believe that all vendors are like that.

I don't think my dad had a single negative experience yesterday. Like card collecting, he says you'll run into a few record fanatics who'll give you the "talk to the hand" treatment.

By and large, though, they're both great communities. 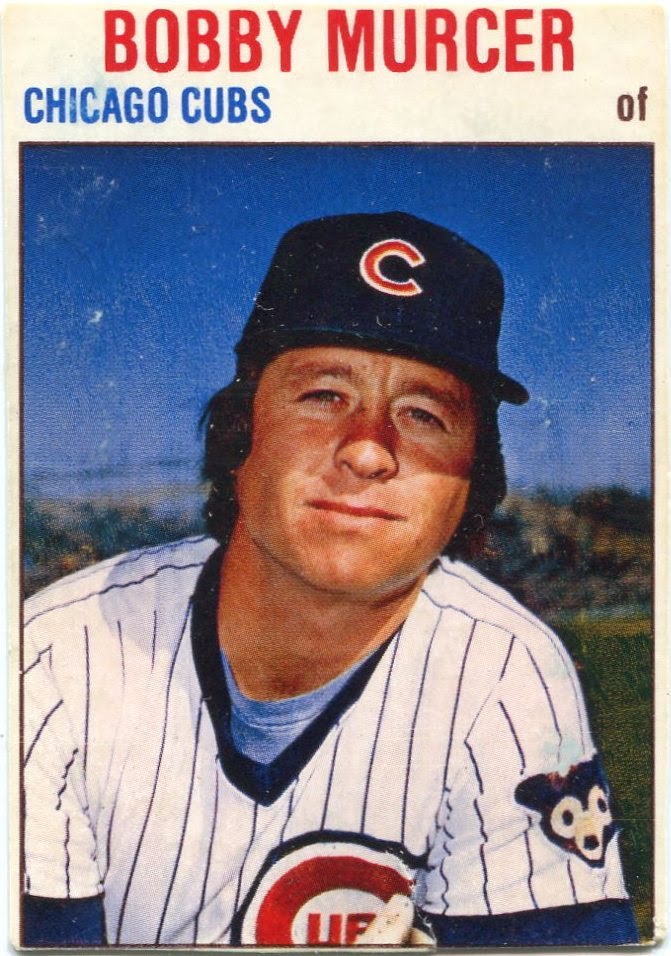 The atmosphere at this record show was pretty much the same as the card show I've attended.

Like card shows, I heard a lot of happy conversation throughout the day. Now that I think of it, I couldn't imagine being at a silent card show. The chatter is part of what makes it so enjoyable.

I saw the looks of finding those vinyl gems on quite a few people. My dad included. It's similar to the look I have whenever I find a new Ichiro or a vintage Hostess card for my collection at a show.

Perhaps most importantly, though, I saw a lot of smiling faces among the crowd. My dad was all smiles throughout the entire afternoon. I'm the same way on card show day.

When you get down to it, putting a smile on one's face is the number one thing a hobby should do.

If it doesn't, then you should probably find another way to spend your free time.
Posted by Nick at 6:25 PM

And....like you post-card show,I spent today "sorting"...,playing the tunes I really wanted to hear first and going through all the liner notes and stuff.....and eventually they'll get filed in the collection...

I'm so glad we had that day together and look forward to the card show this weekend!

Good to know that more people than not understand that a hobby is supposed to be fun. Nice to focus on the positive. The few nitpickers are tiresome, indeed...

Say hi to Dad for me.

Vinyl is another one of my addictions. Have been collecting for a while. I am not condition sensitive. As long as it plays. Collect 8 tracks also.

I wonder what my copy of "Sugar Sugar" by the Archies that I cut off the back of a box of Sugar Crisp would go for?

I'd love to go to a record show. Sounds pretty awesome. I've been picking up records every now and then at flea markets, but wish I knew a little more about them.

I've never seen a record show, but they must be amazing. I am a total stickler for condition in that area because I actually play them. I don't buy too often as most records nowadays are digital recordings downgraded to analog for the sake of being released on vinyl, but I did just get my second turntable - a vintage Technics direct-drive. I'll trade you if your Dad has a spare new needle.