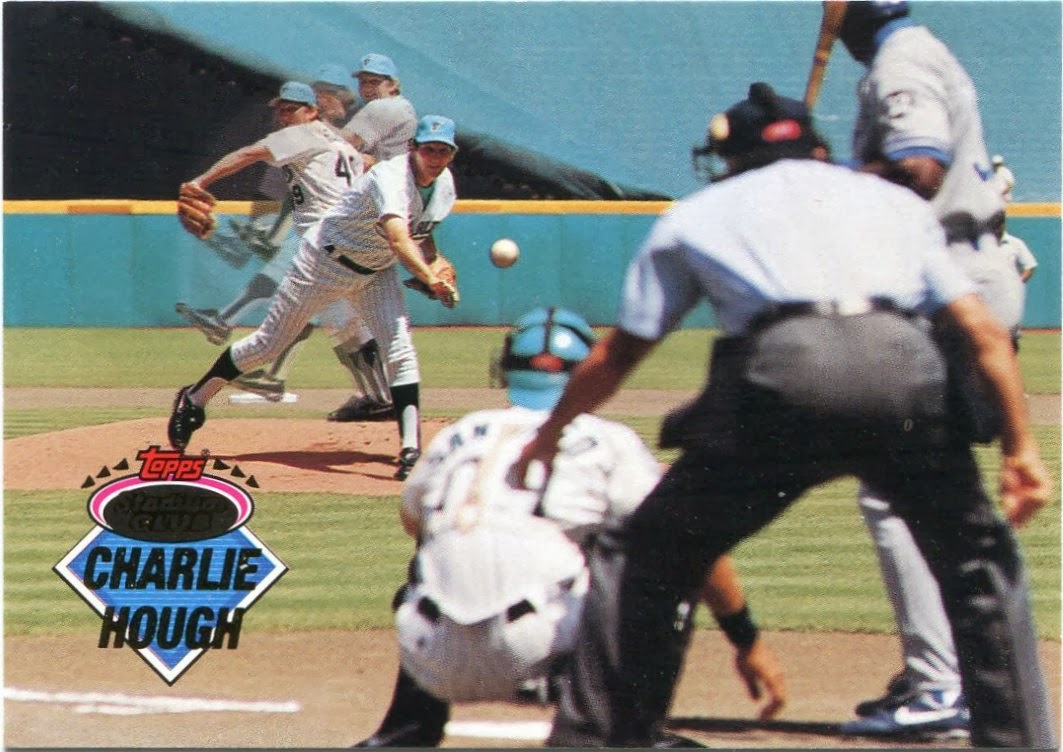 In continuing on from part uno of this trade post mini-series, we move on to the second half of the Randomocity fellow blogger Ethan recently sent me.

The package Ethan put together was actually two mailers in one. "Dos" may have been even more Random than the first.

Things started off, however, with a longtime need of mine.

I think most of my "Dime Box Dozen" needs are at least fairly attainable. I try not to put numbered or otherwise rare cards on the list.

This Hough was a bit of a deviation from the norm. For one thing, it's an insert. That alone sets it apart from most of my "Dime Box Dozen" needs.

Because inserts from the overproduction era can be lost to history at times, I wasn't sure I'd ever track one down. Thankfully, Ethan put an end to that thought by including it in this trade package.

What you see above is a treasured "multiple-exposure" shot from the very first pitch in the history of the Florida Marlins. And it comes courtesy of Charlie Hough, a legendary knuckleballer.

I think you can see why it was such a desired card for me. 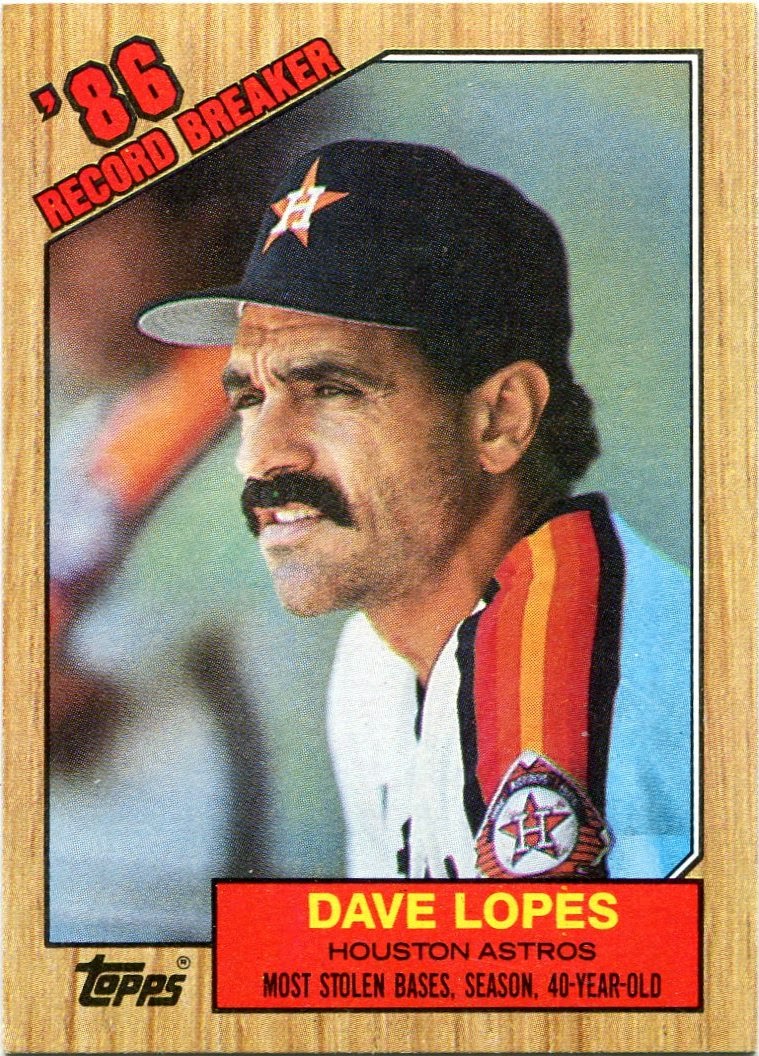 Still, that wasn't even the only "Dime Box Dozen" nominee Ethan knocked off the list.

This '87 Topps "Record Breaker" Davey Lopes had somehow eluded my grasp for all these years.

While "Most Stolen Bases for a 40-year-old" is certainly an odd feat to commemorate on a baseball card, the real reason I wanted it was because of Lopes's unfamiliar tenure with the Astros.

Just days after I added it to the list, Ethan came along and sent an extra copy my way.

It's one of the shorter "Dime Box Dozen" tenures in history. 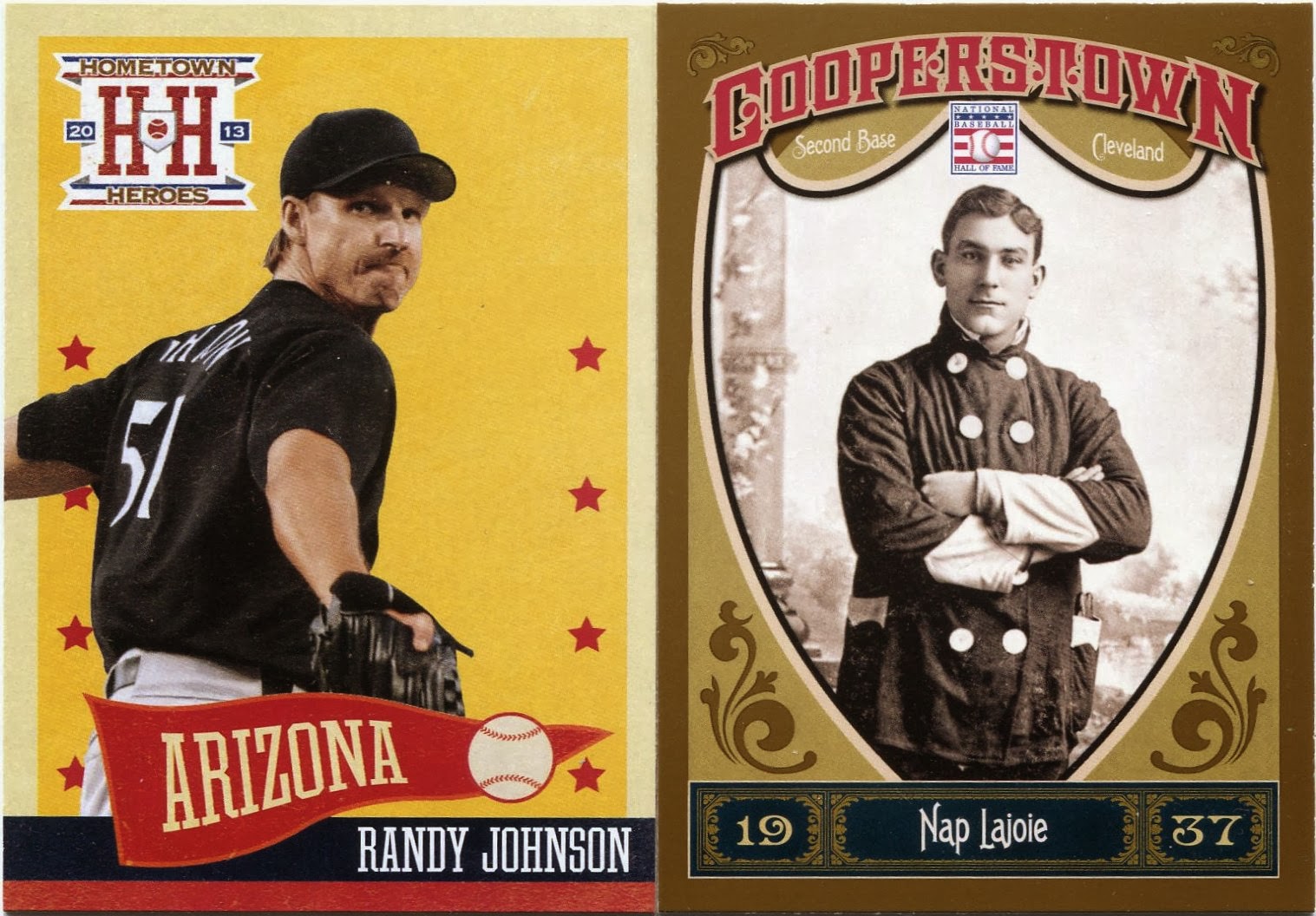 Out of all the cards Ethan sent, these were the only ones I knew were coming.

In one of our emails, he asked if I needed some of his various Hometown Heroes and Cooperstown extras.

Though I wasn't surprised when they fell out of the package, that doesn't make the joy of owning these two sweet pieces of cardboard any less sweet. 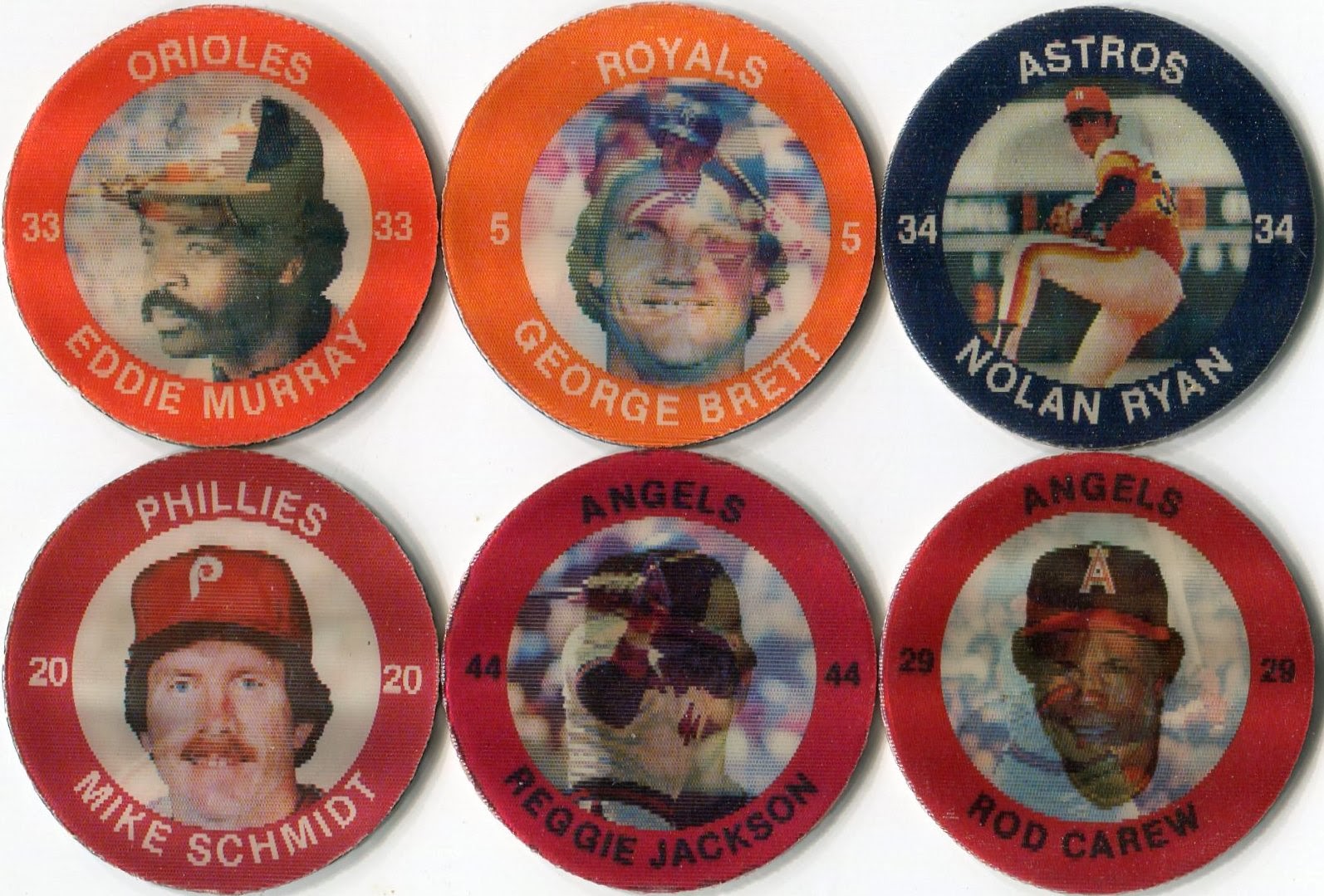 Let's get back to the Random, though.

Before Ethan sent them along, I'd only heard about these 7-11 Slurpee 3-D coins. Given my love for oddballs, I'd long wanted to own a few.

Between Brett, Ryan, and Carew, Ethan put together quite an assortment of these things.

And now I have a taste for a Slurpee, to boot. 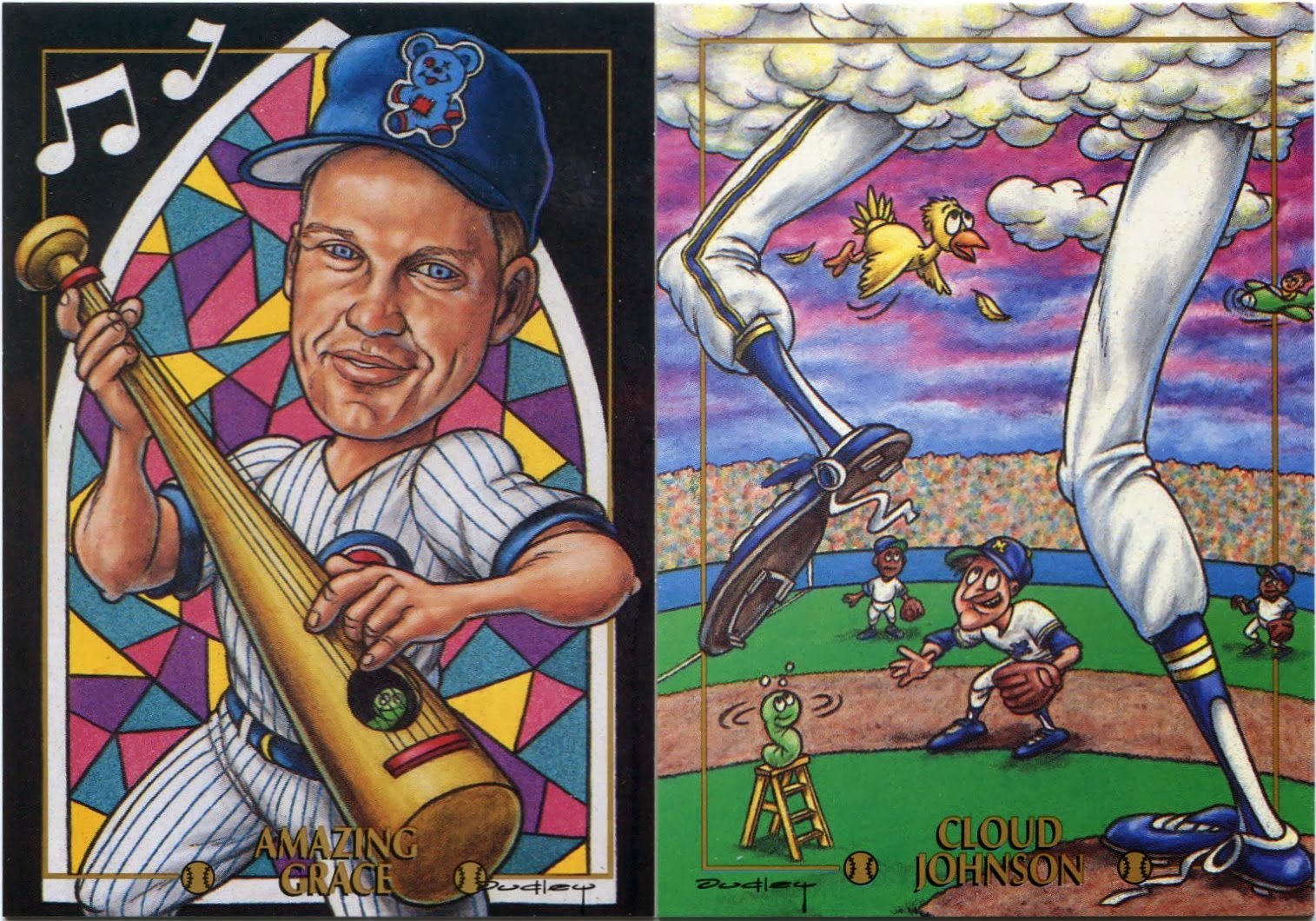 These were completely new to me.

A little research found that they hail from the 1993 Cardtoons checklist, an unlicensed parody set that was released after a long battle with the MLBPA.

While other cards may be good for a grin or a light chuckle, these things are genuinely funny. I mean, "Cloud Johnson"? 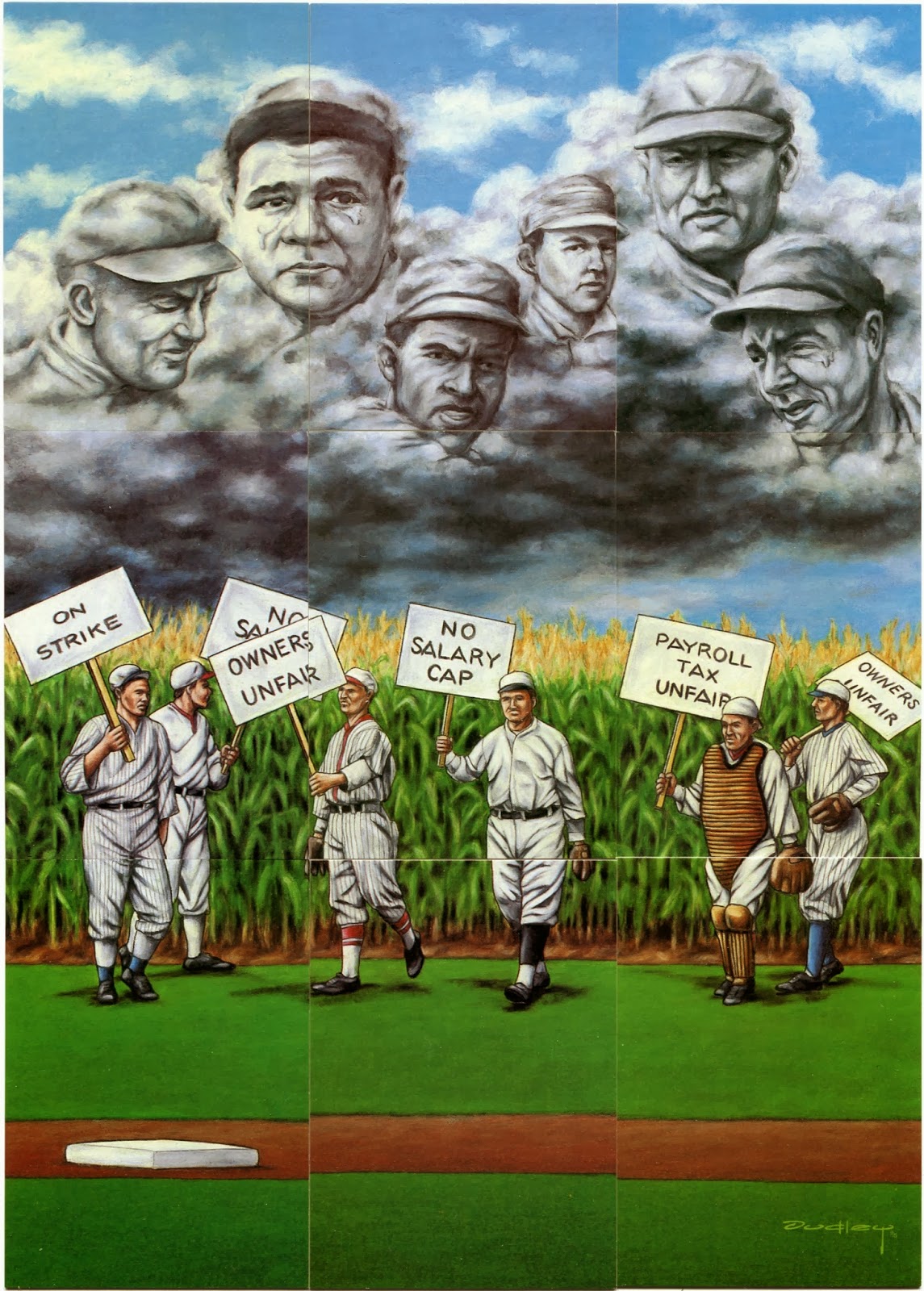 Of course, the early-to-mid '90s represented the peak of tension between players and owners.

It's obvious that part of the intention of this Cardtoons series was to mock the greed that was sweeping the game at the time.

Ethan sent all nine pieces needed to assemble this masterful work of art. In a very Field of Dreams-like setting, players are seen picketing while past greats like Ruth and Cobb look down from the heavens.

It's an obvious jab at the "modern" ballplayer, though there's little denying that the owners had a significant role in the 1994 strike as well.

Labor strife aside, this is one of the most beautiful examples of Random you'll ever see. 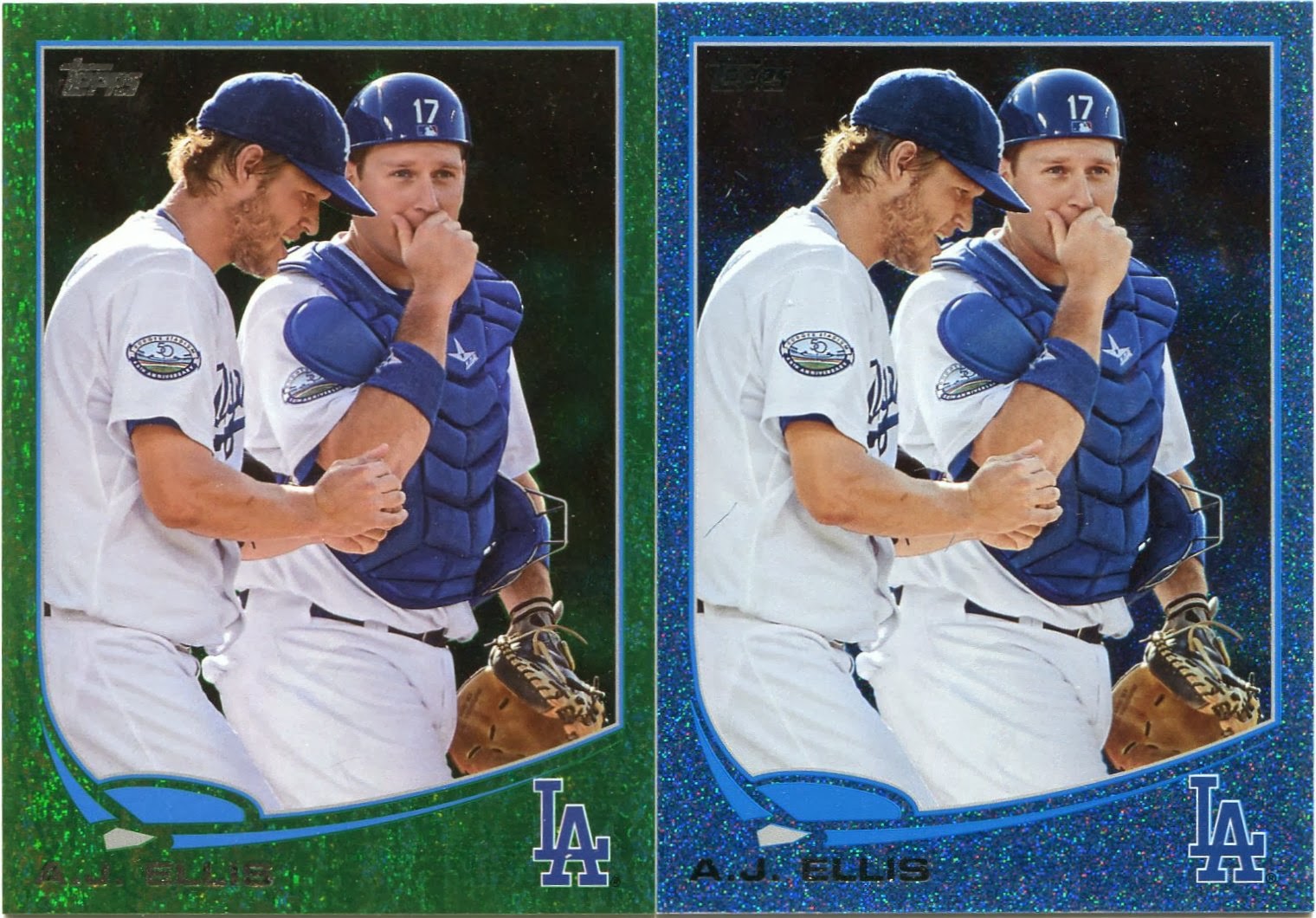 As he recently detailed in a post on his blog, Ethan is attempting to complete a 2013 Topps A.J. Ellis rainbow.

He has a pretty darn good lead on it, and I commend you to keep an eye out for any of the pieces he's missing. I know I will.

In the meantime, Ethan was nice enough to send me a couple of his extras.

I was most appreciative of the gesture. So appreciative, in fact, that I've decided to add Mr. Ellis to my catalog of player collections. With a couple of beauties like these, I'm off to a good start.

Don't worry, though, Ethan. If I happen to find any of the ones you need for your rainbow, I'll still send them along.

You have my word. 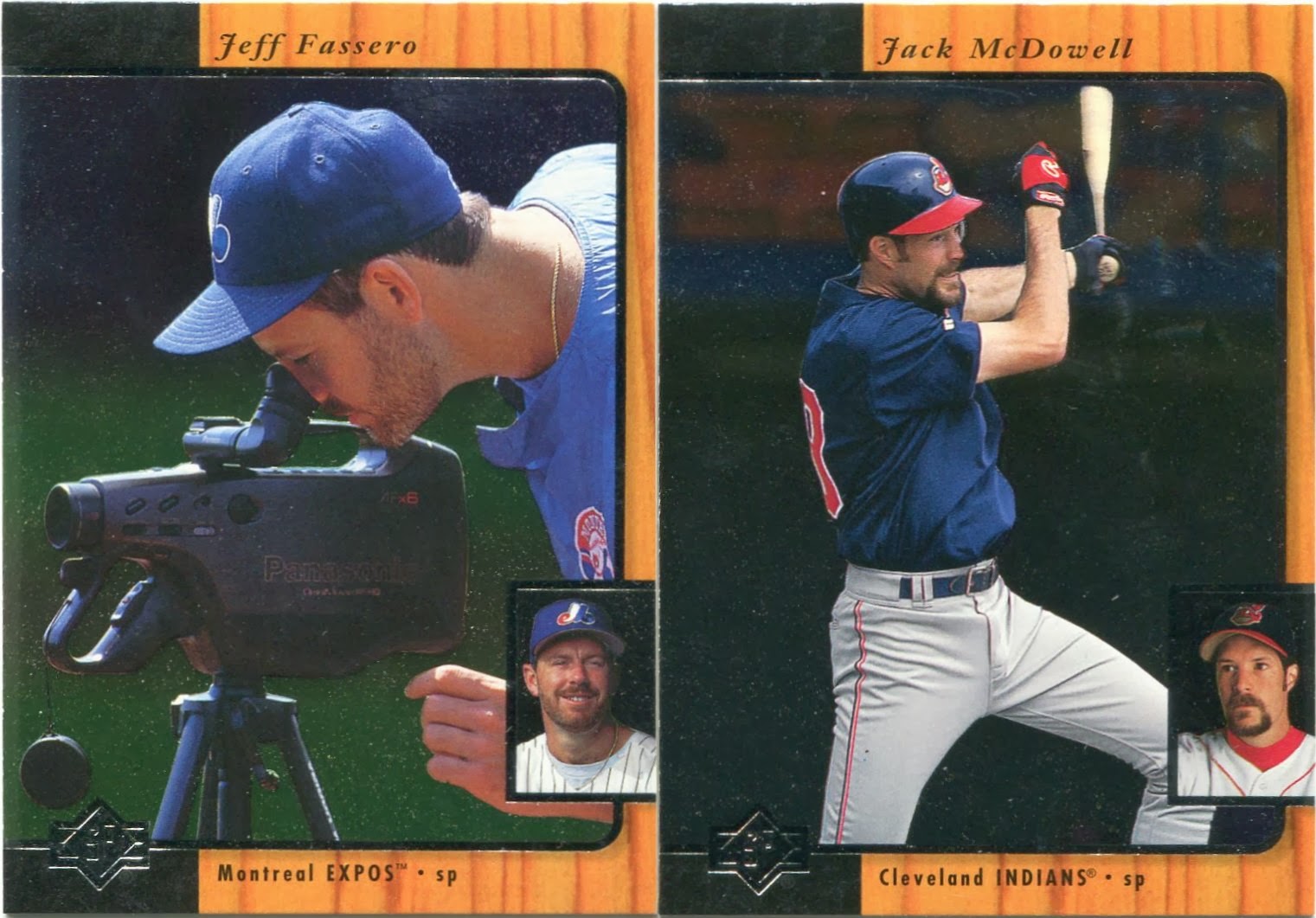 Though much of the mini-collection fun was relegated to package uno, Ethan still slipped a couple into numero dos.

The Fassero is an early "behind the camera" piece, while the McDowell is a rare post-DH/pre-interleague shot of an American League pitcher at the plate.

Maybe it's time I started paying more attention to the SP brand. 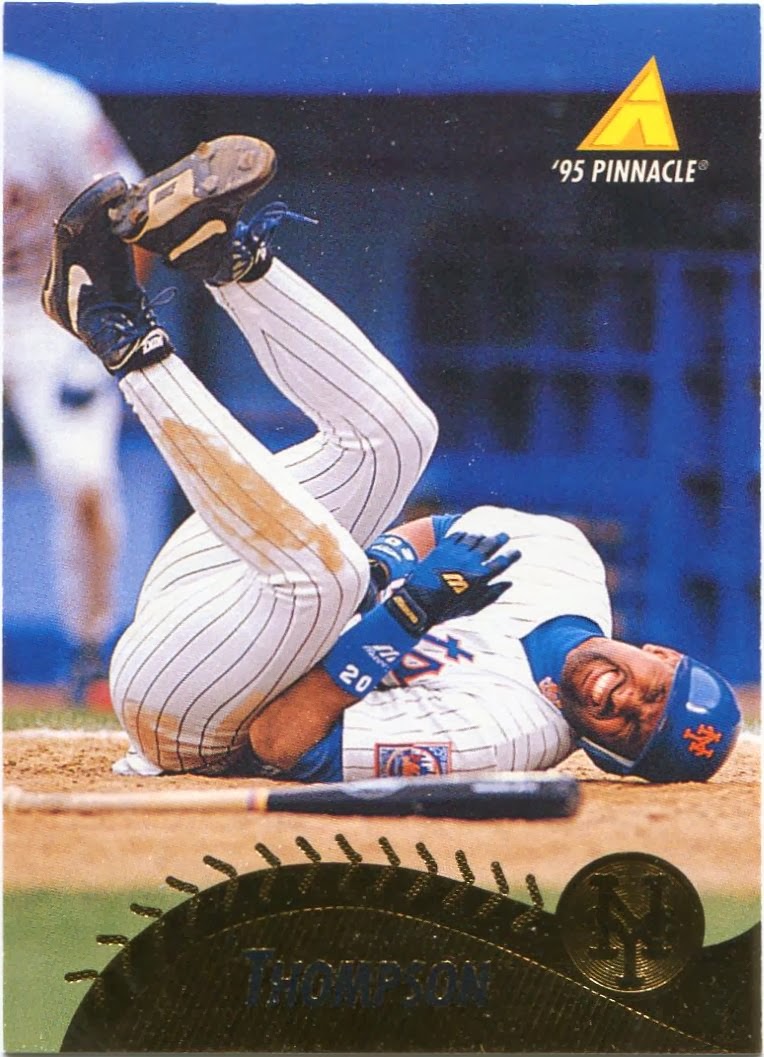 In his notes to me, Ethan said he recently ripped open a couple fat packs of 1995 Pinnacle.

If you read this blog at all, you might already know how big of a Pinnacle nut I am. I still maintain that it's the most underrated brand in history.

I doubt I've even scratched the surface of all the great cards Pinnacle has to offer. I know I'd never seen this rather painful shot of Ryan Thompson before this package came along.

It's a rare add to the "hit by pitch" mini-collection I've recently started. 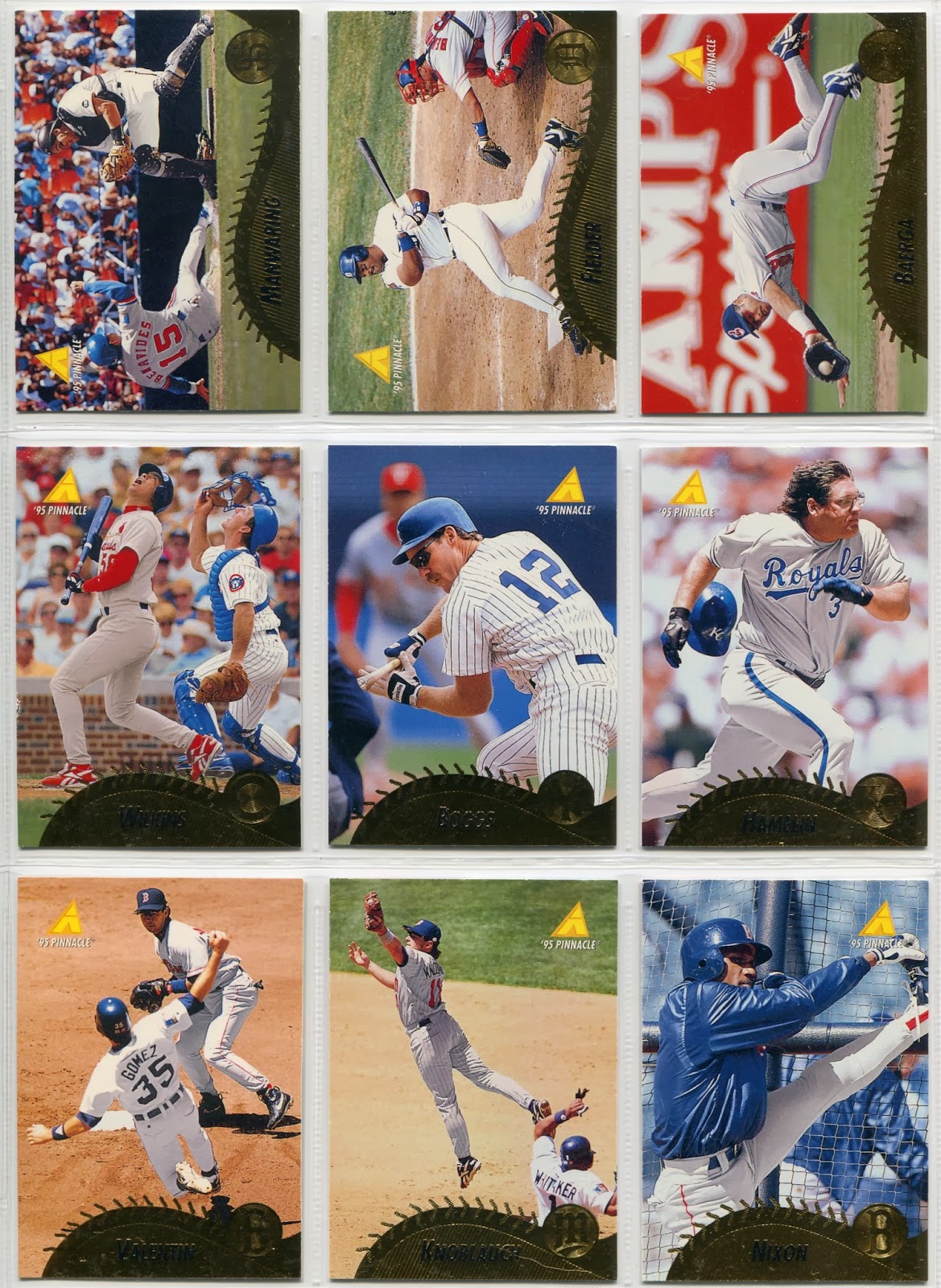 This set is absolutely filled with beautiful photography.

Between diving catches, double plays, or guys stretching by the batting cage, not many checklists can match the pure awesomeness of this one. 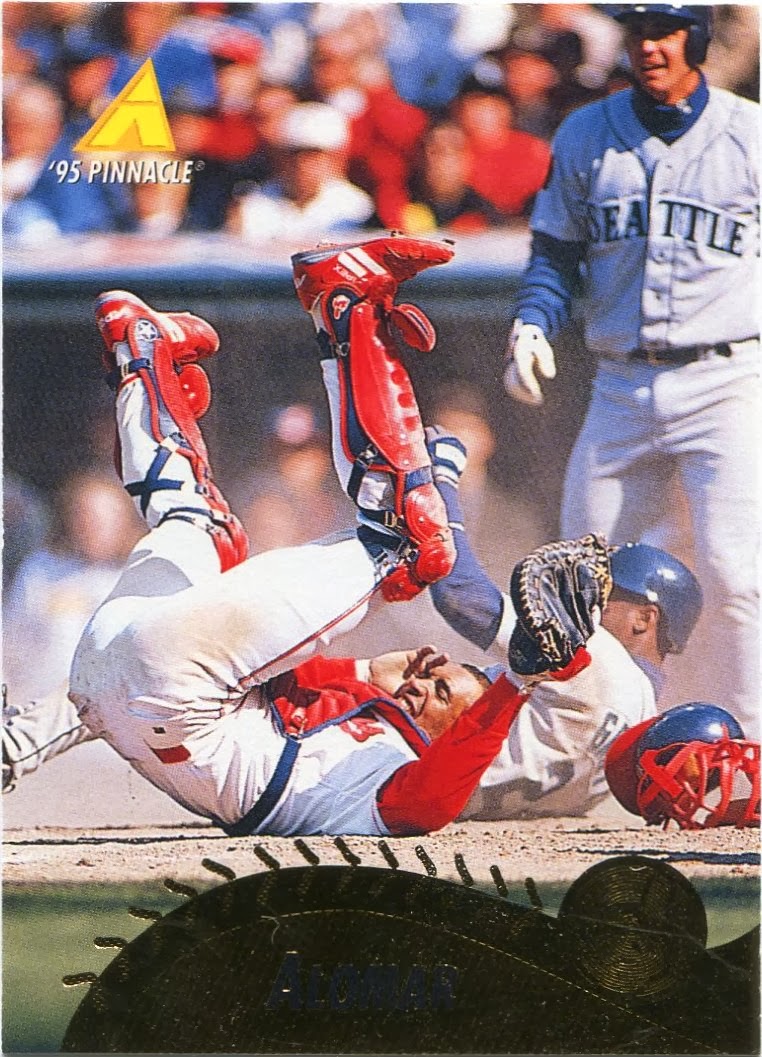 It's even home to some of the most jaw-dropping "plays at the plate" you'll ever see.

As if a head-over-heels Sandy Alomar Jr. wasn't enough, that's Ken Griffey Jr. on the dirt in this Junior-centric shot.

Because I was so fascinated by this card, I decided to do a little detective work. I'm fairly certain that this shot comes from an Opening Day contest between the Indians and Mariners on April 4th, 1994.

I'm pretty sure that what we're seeing here is Griffey scoring on a pinch-hit single by Keith Mitchell in the top of the 10th during that game. The throw home allowed baserunner Tino Martinez to advance to third, and Mitchell to second.

The Indians would tie it back up in the bottom of the frame, and eventually win on a walk-off single by Wayne Kirby in the 11th. 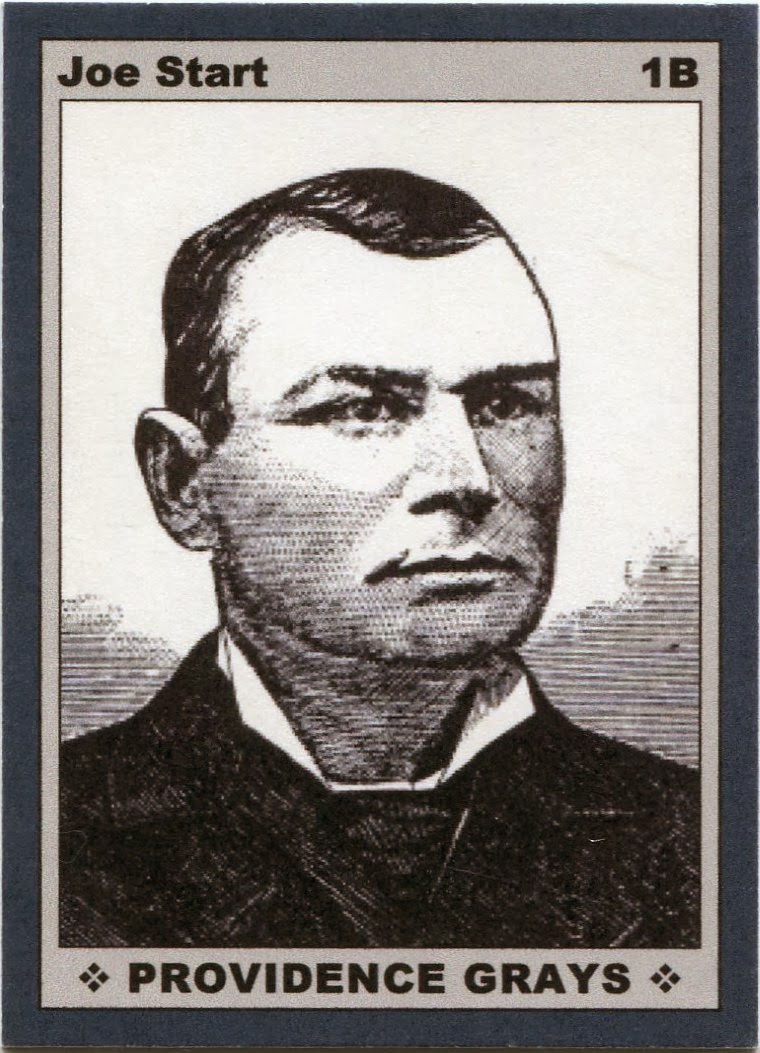 In hindsight, Ethan's inclusion of this card makes sense.

I know he's a big Joe Start fan. From what I've read, Start was one of the first and longest-tenured stars in baseball history.

He played for the Providence Grays in 1884, manning first base during the season in which "Old Hoss" Radbourne won a record-setting 59 games. Start retired from the game in 1886, ending a career that had begun before the Civil War started.

Little tidbits like those make me appreciate the National Pastime more with each passing day. 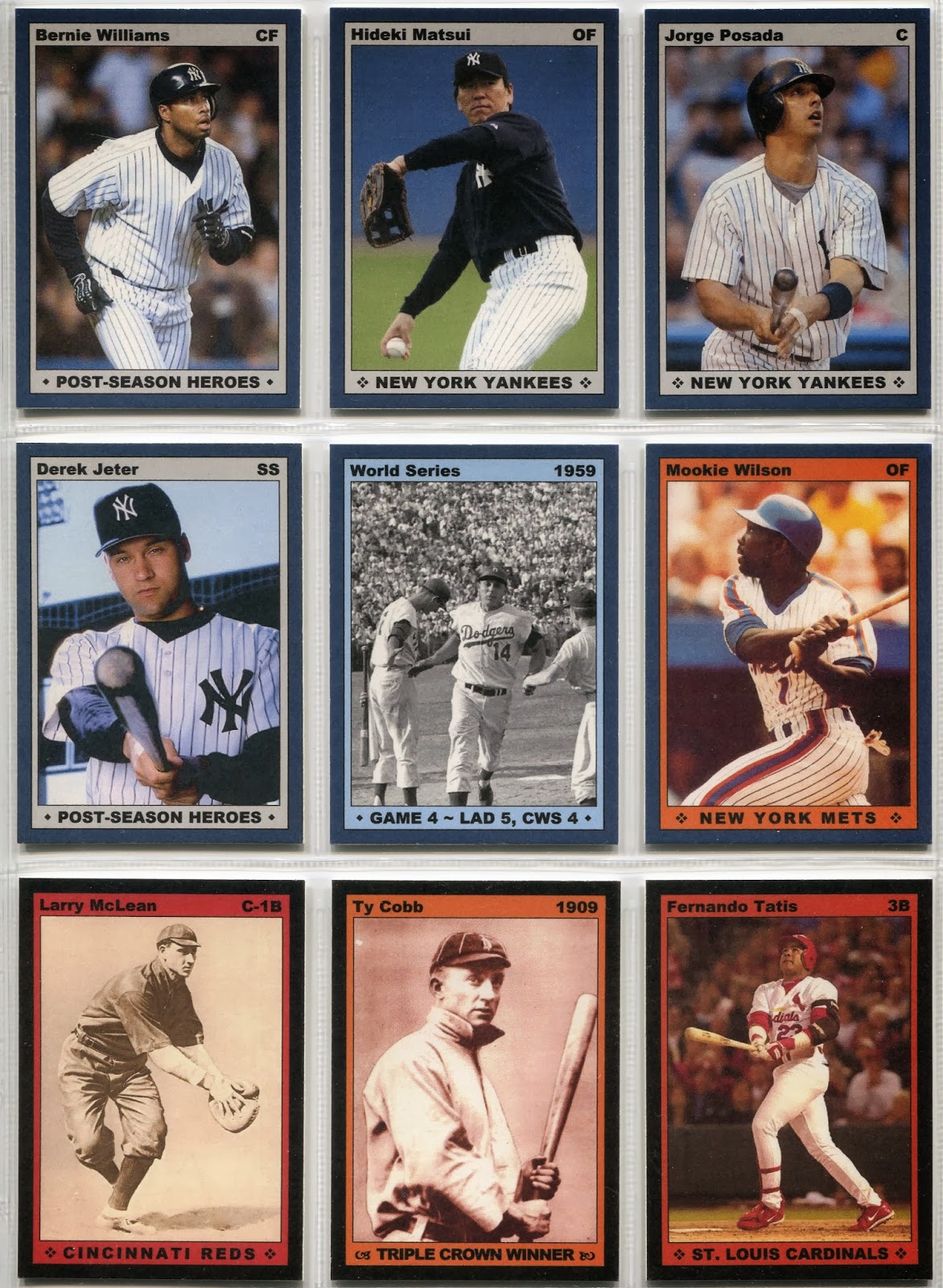 Though I loved the design and matte-like feel of the Start and the others Ethan sent, I had no idea what they heck they were.

And, not to sound snarky, but I can almost guarantee you don't, either.

That's because these are customs that Ethan himself designed and printed a few years ago. In his notes to me, he said that only about two or three of each one exist.

Ethan said he was living in New York at the time he made these, which explains the large number of Yankees.

I say this in complete honesty, Ethan. These are lightyears better than much of what Topps is doing these days.

I'm honored to give these a home in my binders. 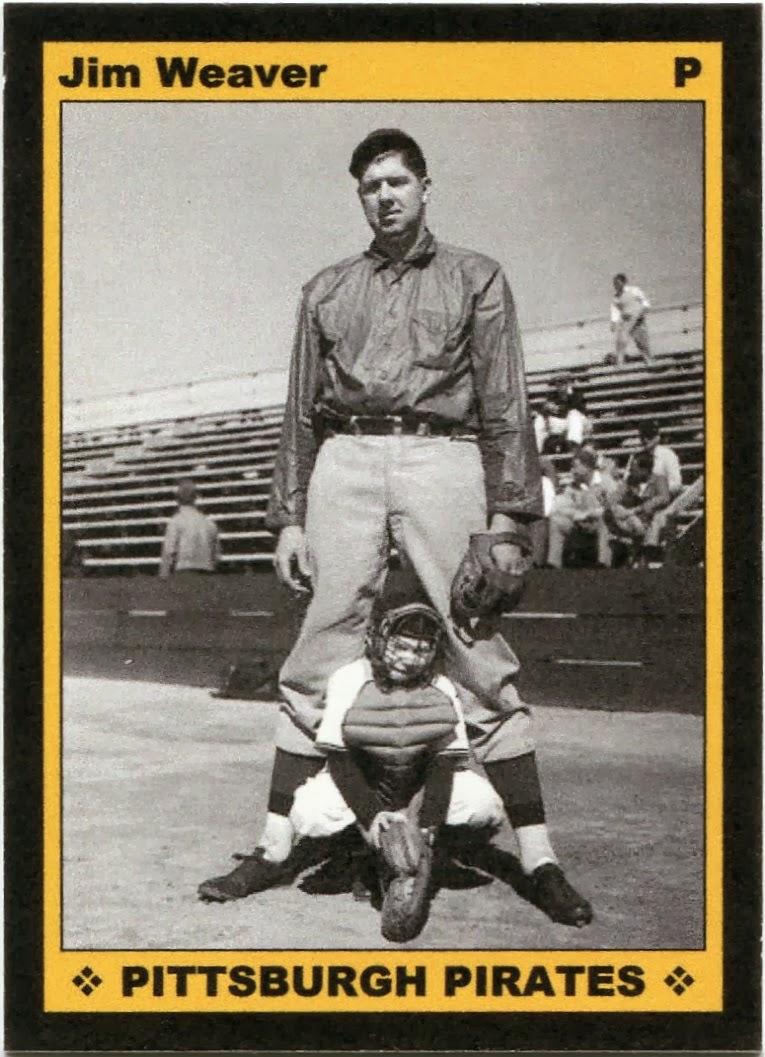 Even though he printed these long before either of us found the blogosphere, Ethan had the foresight to include a "cards with kids" issue in his custom checklist.

According to Ethan's little bio on the back, that's the son of the Pirates owner at the time posing with "Big Jim" Weaver, who was 6'6". (Which probably seemed like 8'9", considering the time period.)

Of all the Random that Ethan bestowed upon me, these were the absolute best.

It's this sort of generosity that keeps this hobby fun for me.

As long as people like Ethan are around, Random will never die.

Random at its best. Great stuff

I had a couple of those slurpee disk thingys back in the day. They might even be in a random box somewhere. Hard to store. But I know didn't have that Carew, otherwise I still would.