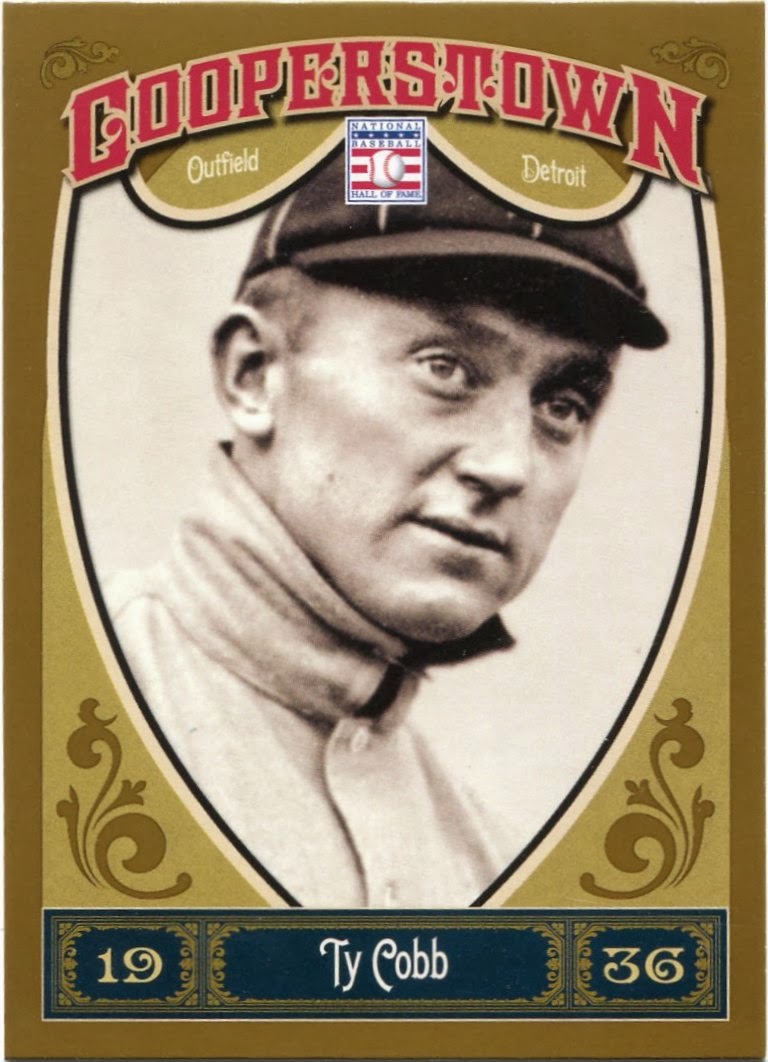 You know what really grinds my gears?

There's a tendency among some people my age to call any song that was released more than two weeks ago as "old". As in...

"Nah, bro, that one is sooooooooo OLD. Let's listen to [insert awful Miley Cyrus song from two weeks ago] instead."

Believe me, I'm not fabricating this one bit. I've heard such conversations on many occasions. With that train of thought, I guess that pretty much makes the type of music I enjoy ancient history.

As much as it might annoy me in that regard, I think I may well be guilty of such thinking when it comes to cardboard. Particularly when the first releases of the new year hit the shelves.

Even cards from 2013 were old news to me. Thankfully, posting about a few recent trade packages I received helped me escape from my bout with 2014 mania.

The first comes from my good buddy Adam of the terrific blog "ARPSmith's Sportscard Obsession". For me, posting a Ty Cobb card poses a question.

If something from three months ago can be deemed "old", then what does that make the early 1900's? 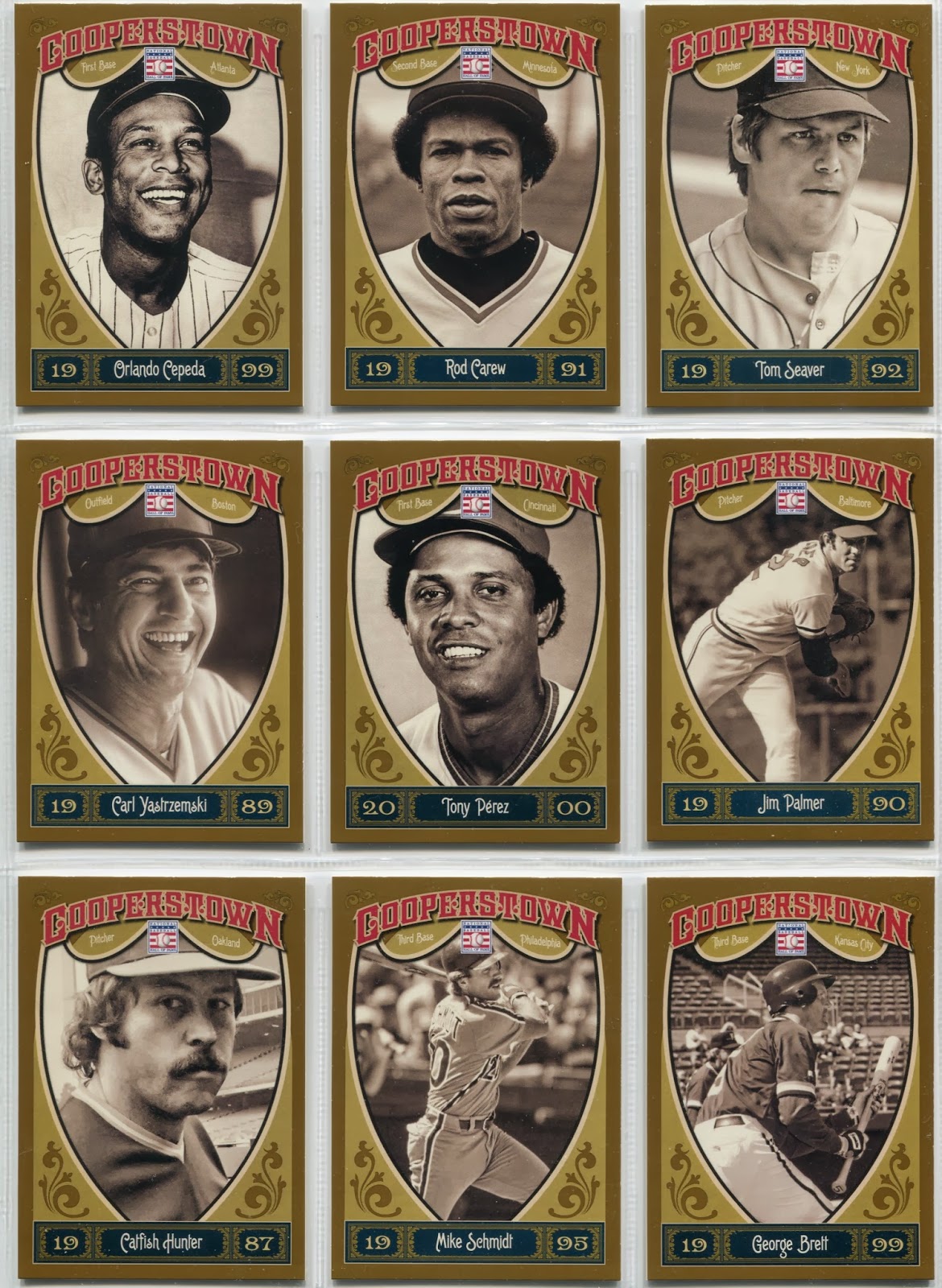 Adam did an absolute number on my Panini Cooperstown needs.

This here is a beautiful page of legendary Hall of Famers. I'm especially fond of the Orlando Cepeda (top-left), seeing as how he doesn't have a whole lot of cards in Braves gear.

I really hope Panini brings this brand back in 2014. 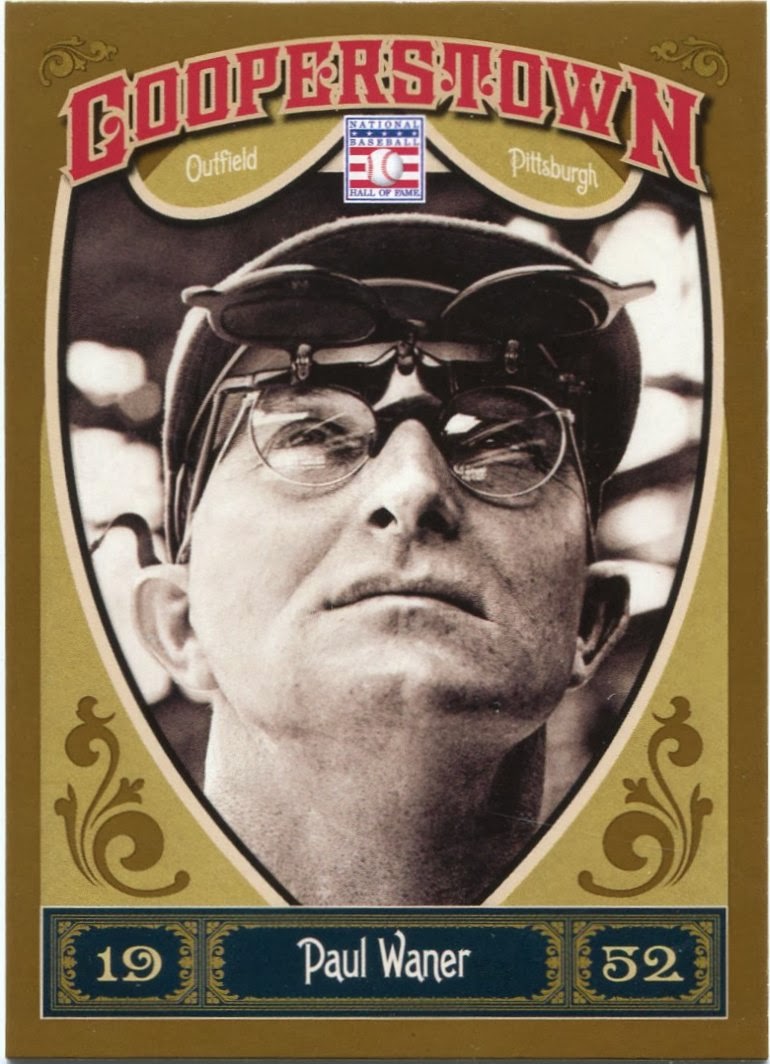 Panini might not be known for their awe-inspiring photography (yet), but this beauty was my absolute favorite from the Cooperstowns Adam sent along.

Mr. Waner is sporting some pretty awesome flip-downs there, something I can't say I've seen on too many other cards.

It's just icing on the cake for what is already a spectacular set. 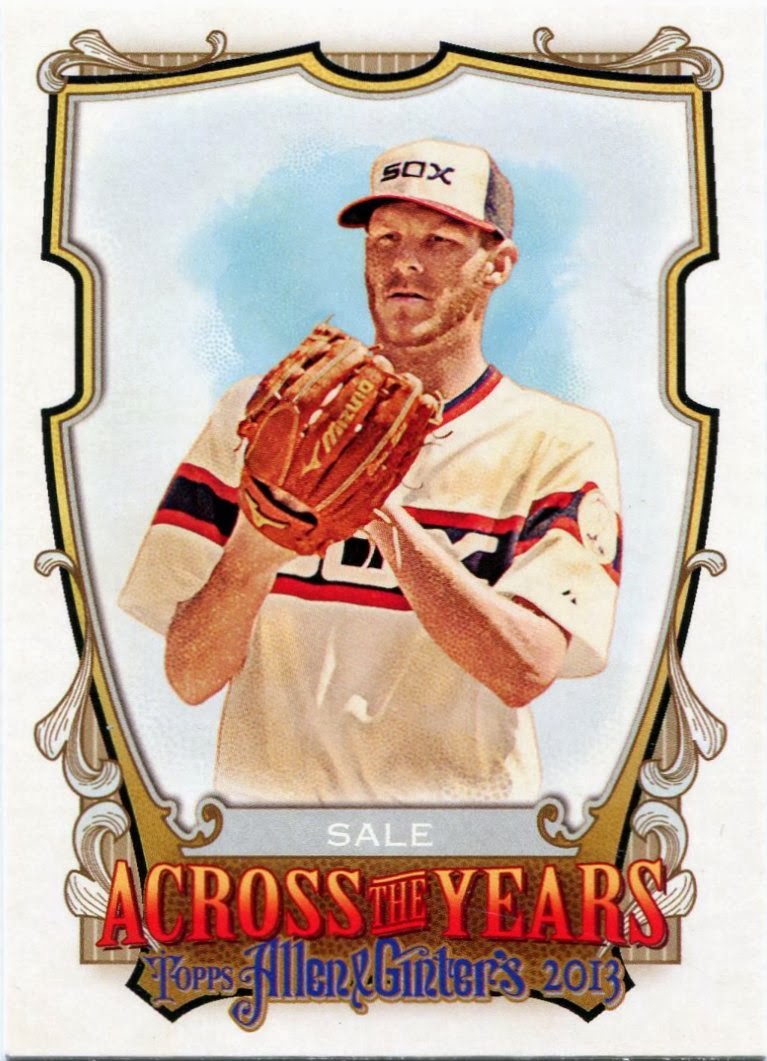 The peak of A&G does sometimes seem like ancient history to me.

Judging from the efforts from the last couple years, I don't think there's a great chance we'll ever see the brand return to its 2007 or 2008 levels. For me, it's just another set on the shelves these days. I think I've finally come to peace with that.

Still, that doesn't mean today's version doesn't have its high points. Reader Howard recently put together one heck of a trade package that highlighted a bunch of A&G upsides.

While they have a good concept, these "Across the Years" inserts were basically a "meh" for me. However, I really like this one of Mr. Chris Sale, a card that features him in a neat throwback Sox jersey.

That's about as far from "meh" as it gets. 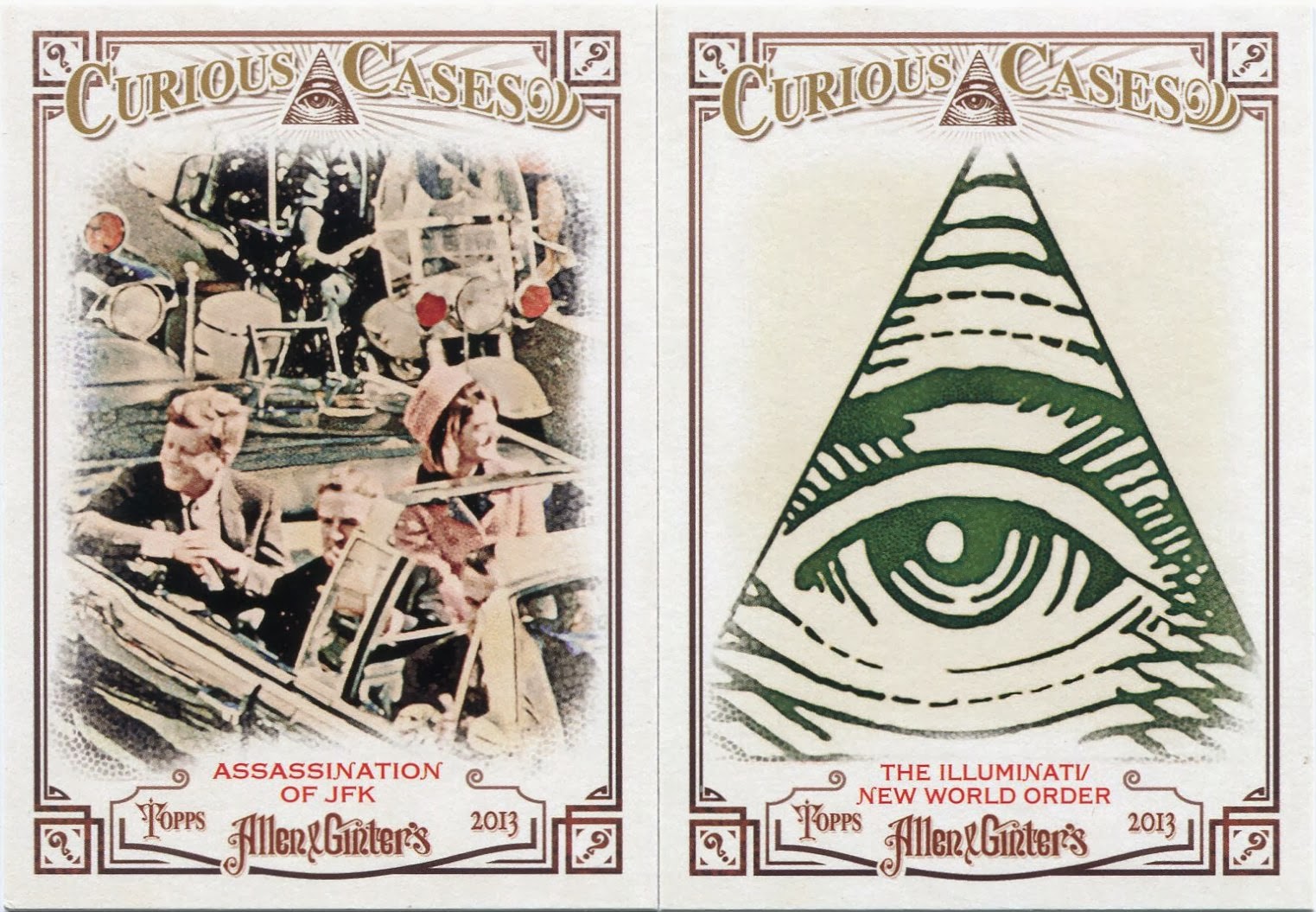 At first, I wasn't big on the "Curious Cases" series.

As they've started to trickle in through trades, though, I've come to love them more with each passing day. I'm not a big conspiracy guy, which is the concept behind these inserts.

But, thanks to my general interest in history, they're still fun nonetheless.

I mean, how often do you see the Illuminati mentioned on a baseball card? 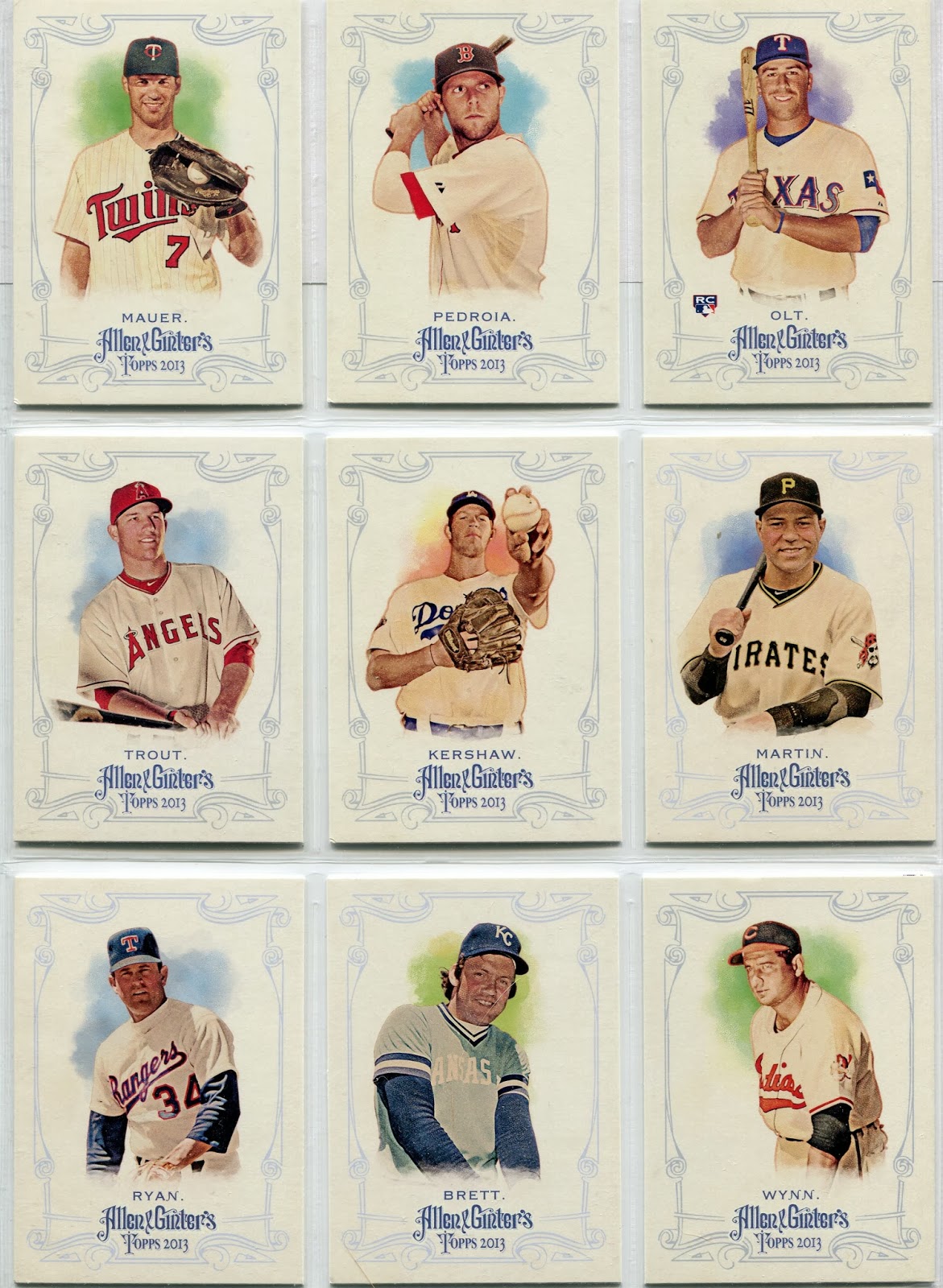 The bulk of Howard's trade package consisted of base cards.

I landed a ton of 2013 A&G from a terrific card show dime box late last year. However, those dime cards omitted a bunch of the bigger names and rookies. I'm guessing the dealer in charge of that table gave guys like Trout and Kershaw the quarter or fifty-cent-box treatment.

Thankfully, Howard saved the day by sending quite a few of those big names my way, even throwing in a few SPs of the likes of Ryan and Brett for good measure.

It's nice to know that so many people have spare A&Gs available.

I barely have to buy packs of the stuff anymore. 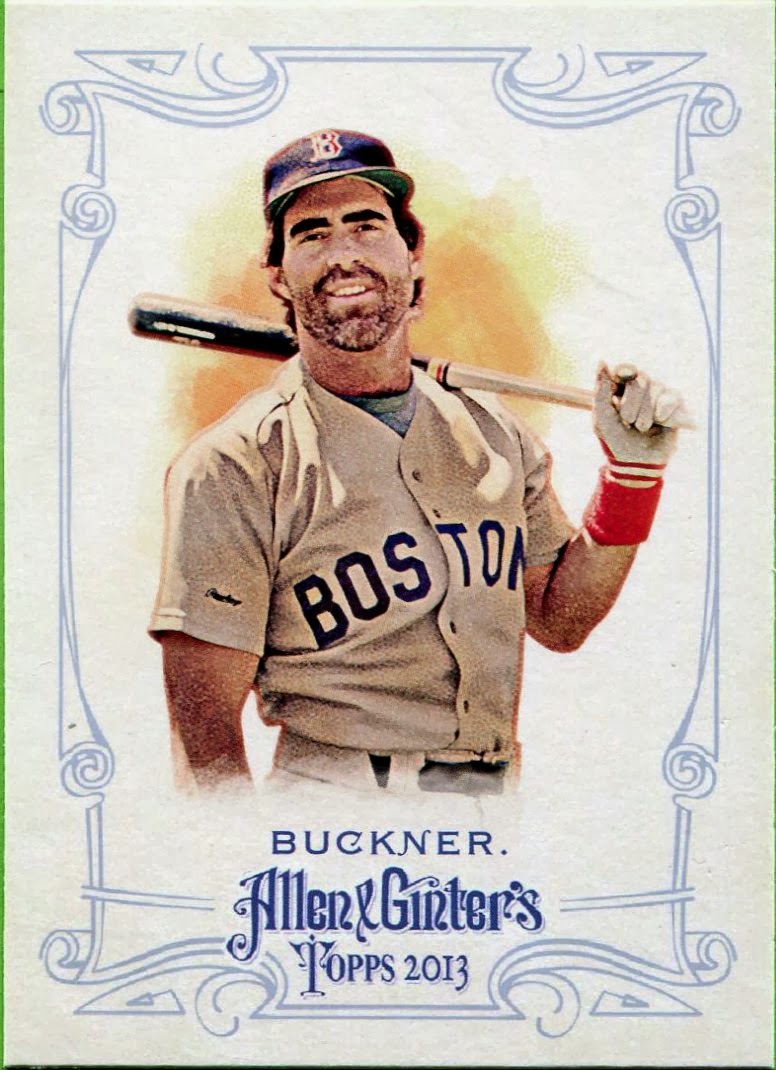 Another slew of "old" 2013 hits came courtesy of fellow collector Shant, one of the more awesomely-named people I've ever come across.

Shant also knocked out a few of my A&G needs from last year, a lot that included this terrific Bill Buckner. It's nice to see someone like him in a big set like Allen and Ginter.

As far as "old" names from baseball history go, I think it's a nice change of pace. 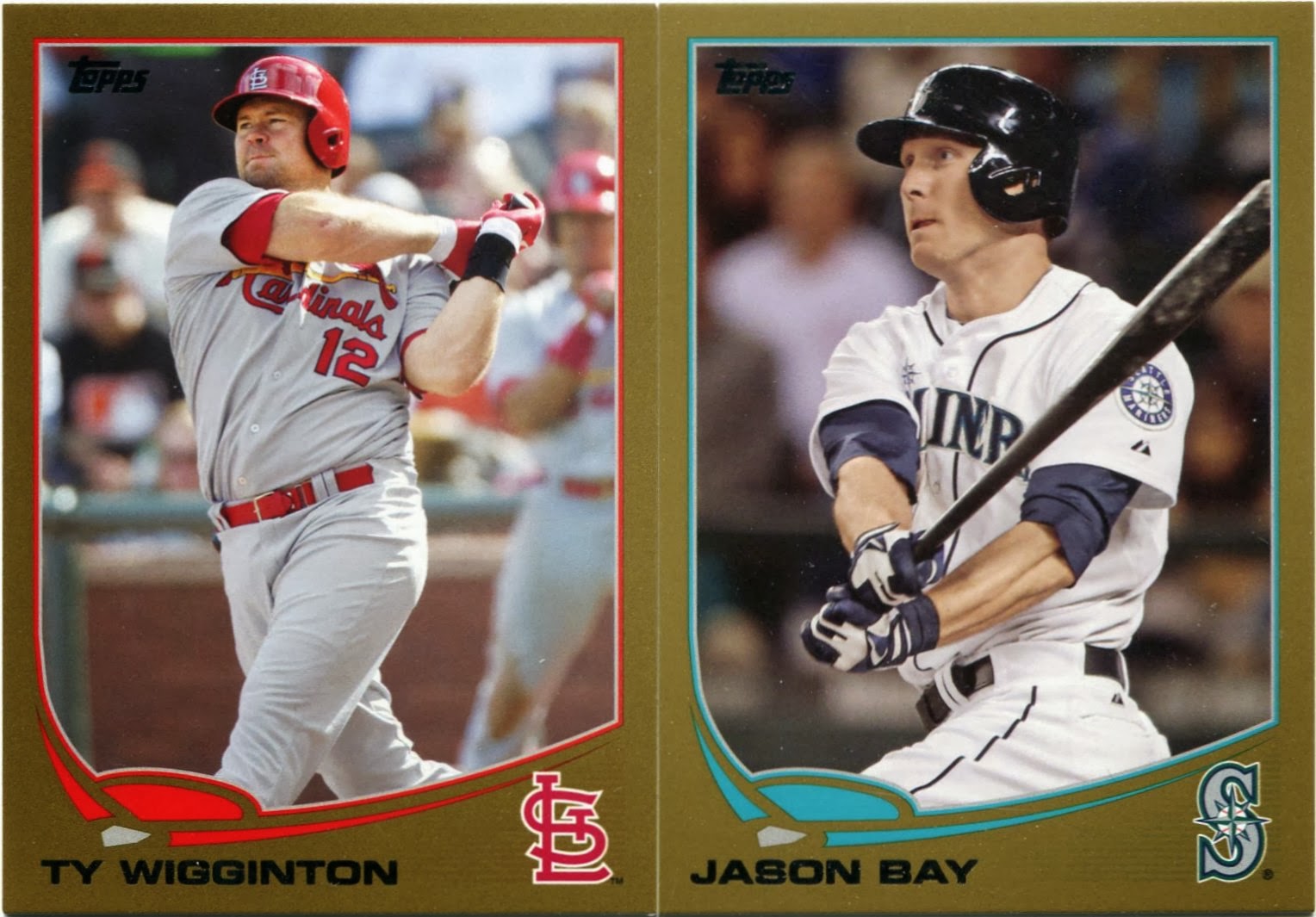 On top of that, Shant generously let me pick from a rather gigantic list of spare Topps Update parallels he had available.

It was paradise for a parallel nut like me. I scooped up a few gold parallels, a lot that included the two you see above.

I'm sure a lot of people didn't even know Ty Wigginton and Jason Bay were in baseball last year. 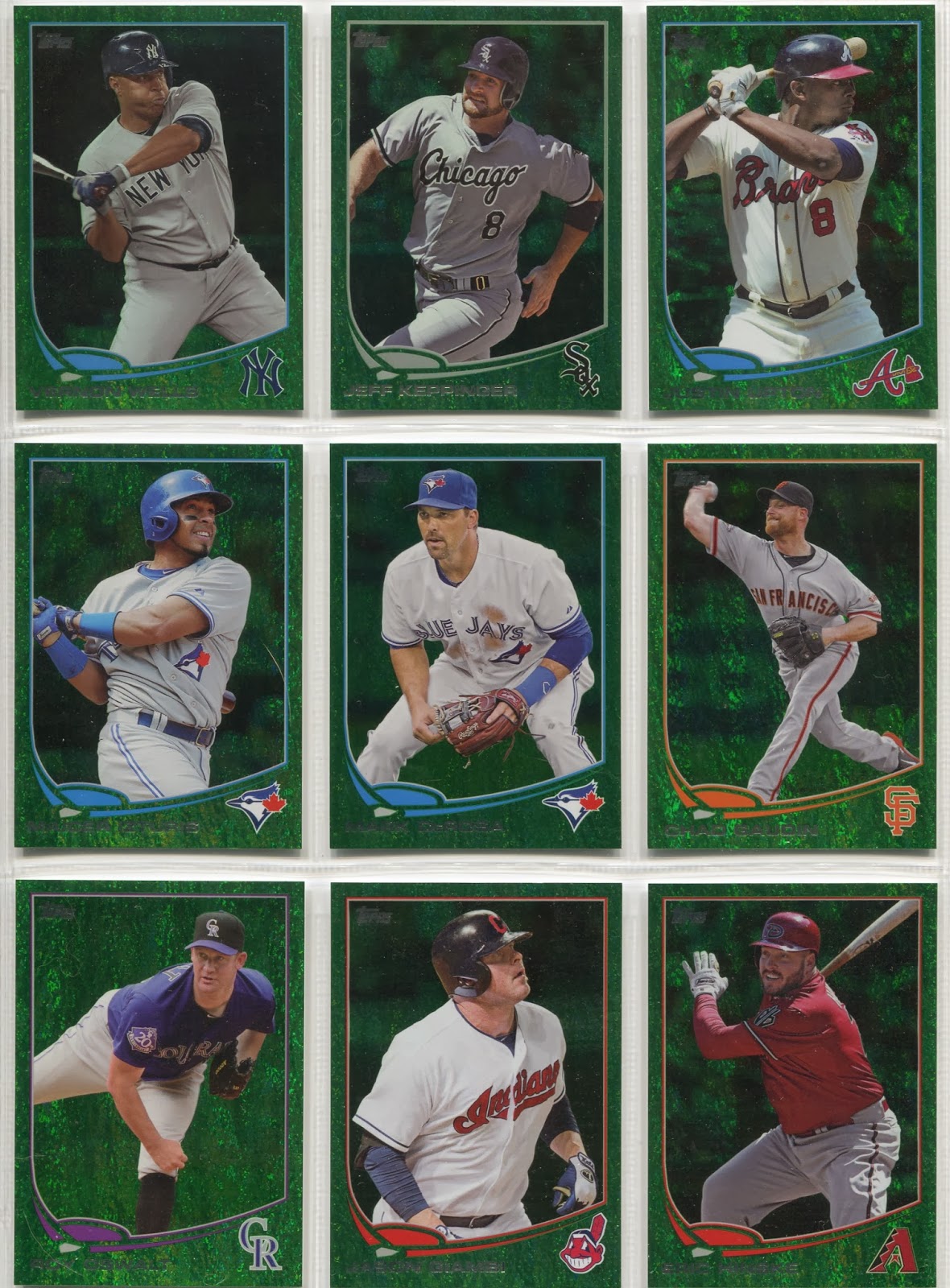 Shant also had quite a few emerald parallels I needed.

Every single one of these guys were featured in new duds during the course of 2013. And, in the case of players like Maicer Izturis and Chad Gaudin, Update gave them their only cards of the year.

That's a big reason why I'm such a consistent supporter of the brand. 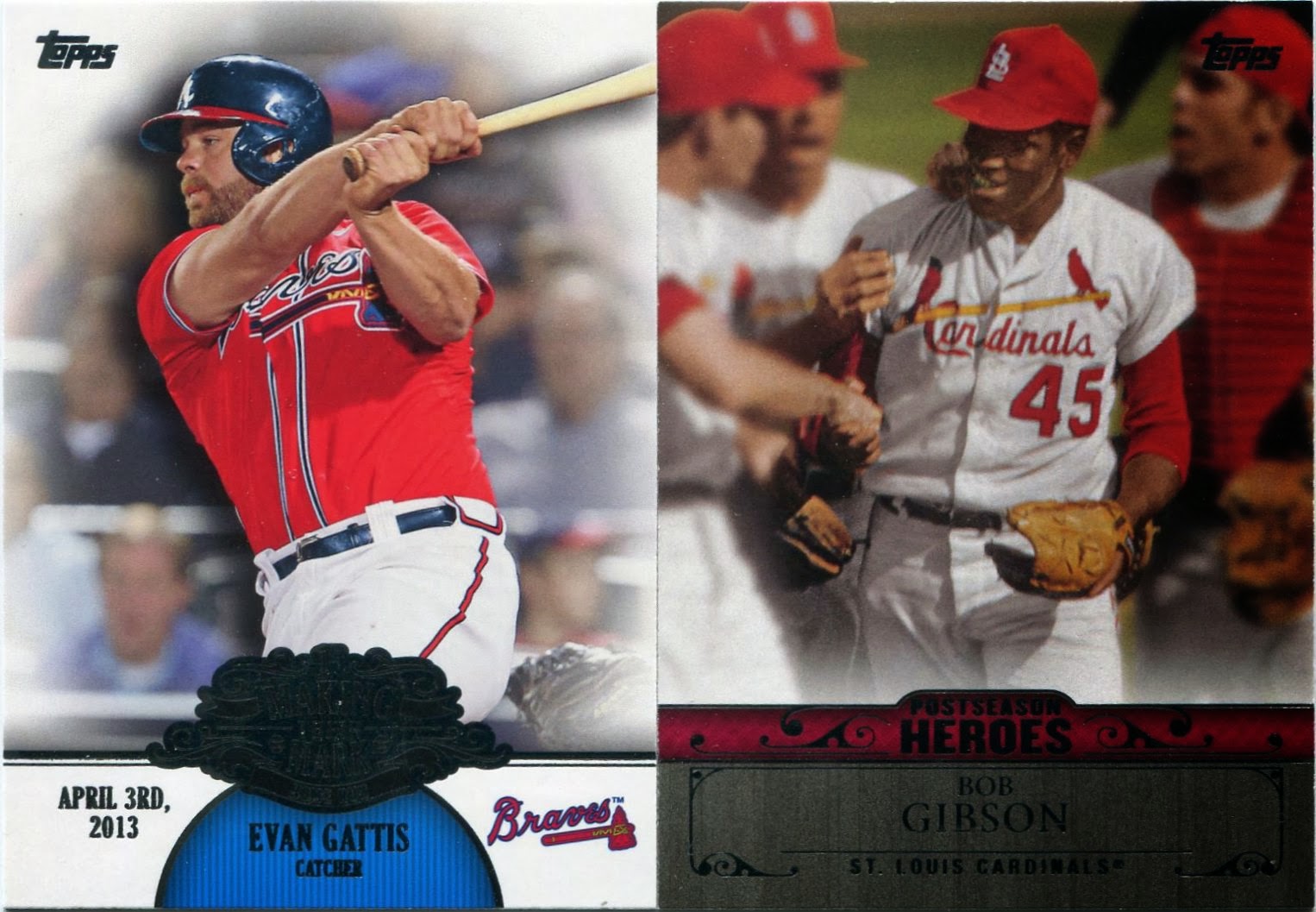 As if the parallels weren't enough, he threw in a few Update inserts from my want list as well.

While the design might leave something to be desired, I really enjoy that Bob Gibson from the "Postseason Heroes" series. 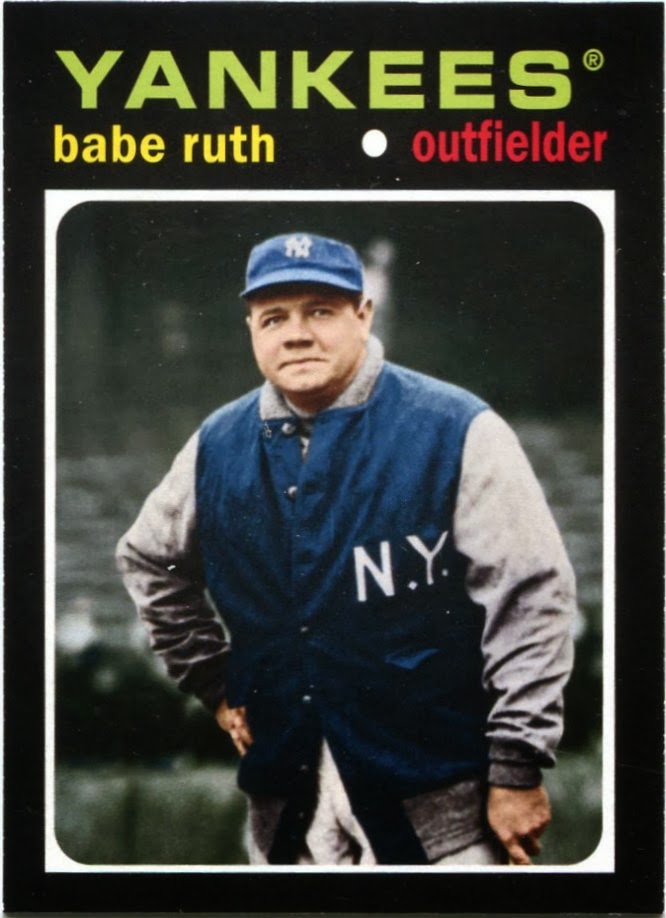 This, however, was probably the best card Shant sent my way.

I have well over a hundred different Babe Ruths in my collection, but this is definitely one of my new favorites.

Because I can honestly say that I've never seen this shot of "The Great Bambino" before.

If you've been keeping up with the times, you might know that recycling photos has been a big problem with Topps lately. This one of "The Babe" in an old-time warmup jacket, though, is brand new to me.

It's refreshing to know that maybe, just maybe, Topps still cares about their photo selection.

Appreciate the good things we saw in 2013, folks.

AHH MY YOUNG FRIEND, HISTORY IS WHERE MEMORIES COME FROM. :)

Wait until you have kids. Mine never miss a chance to express the opinion that my music might as well be from the same era as Mozart. By the way, this is something I highly recommend, if you're interested:

Love that Buckner card. I will be on the lookout for it now

And I have that book mentioned above,if you want to borrow it!

If you aren't TOO attached to the Oswalt emerald, I wouldn't mind trading for it.

I agree with your opinion about A&G. I buy less and less of it every year.