Into the Sunset: 2013 farewells 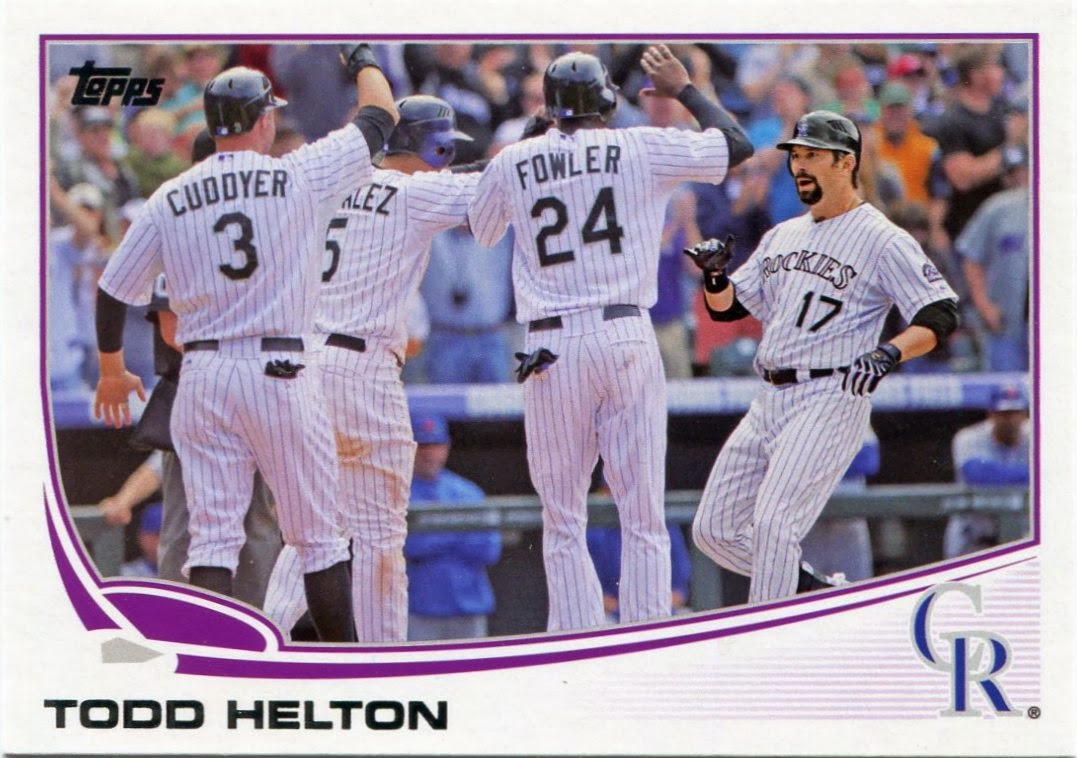 Every year, the game of baseball bids farewell to a few of its longtime employees.

At the same time, however, it seems to welcome bright young stars with each passing season. This perpetual flow is part of what makes baseball so enjoyable.

Still, it seems as though the bright young stars get all the publicity. For the most part, each year's farwell class manages to fly under the radar.

Much like a similar post I wrote at the beginning of the last card season, we'll be taking a look at some of how some of the game's best retirees were sent into the sunset.

"The Sunset Class of 2013" was a bit different, in that included quite a few high-profile names. Mariano Rivera, Todd Helton, and Michael Young all called it quits after last season.

All three, however, received true "sunset" cards in the 2014 Topps checklist, which is something I can't say about anyone else in this post. 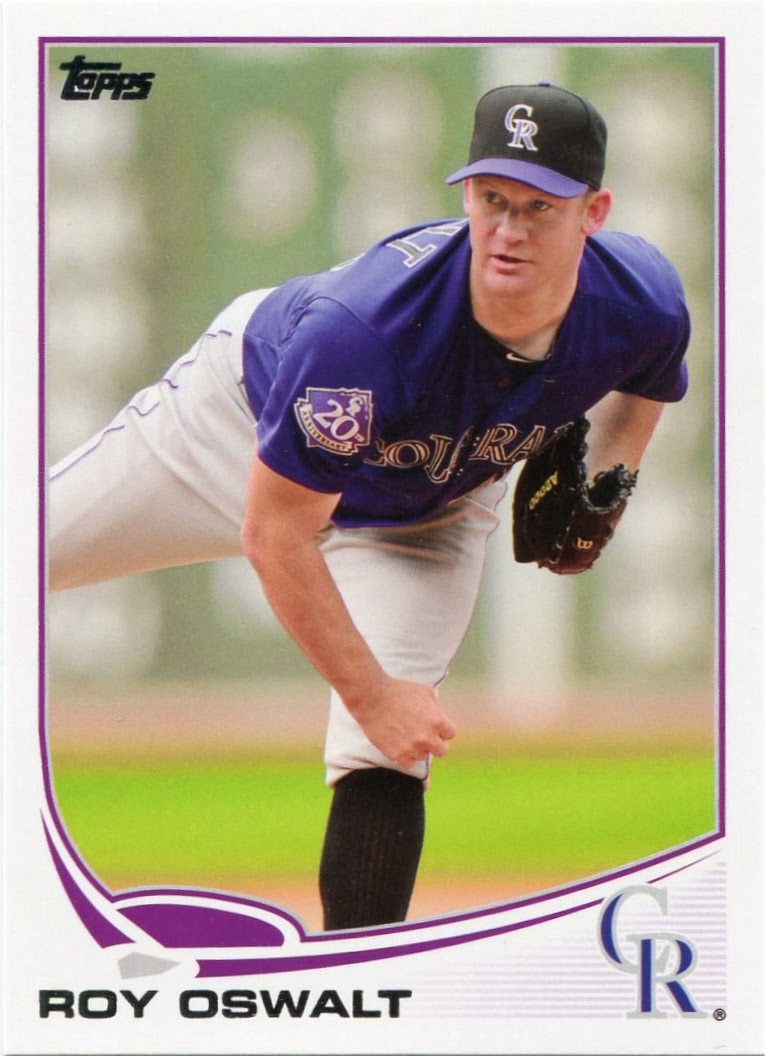 One of Helton's fellow Rockie teammates looks to be going out with less of a bang.

Though I don't think he's officially retired yet, I can't see any other club taking a chance on Roy Oswalt in 2014.

He didn't sign with Colorado until May. Battling injuries throughout the season, Oswalt went 0-6 with a dreadful 8.63 ERA in nine starts with the Rockies.

His "sunset" issue isn't anything out of the ordinary. Just your standard pitching shot. But it'll probably go down in history as the only card that features Oswalt as a Rockie.

A few years down the road, I'm sure all of us will forget he even played in Colorado. 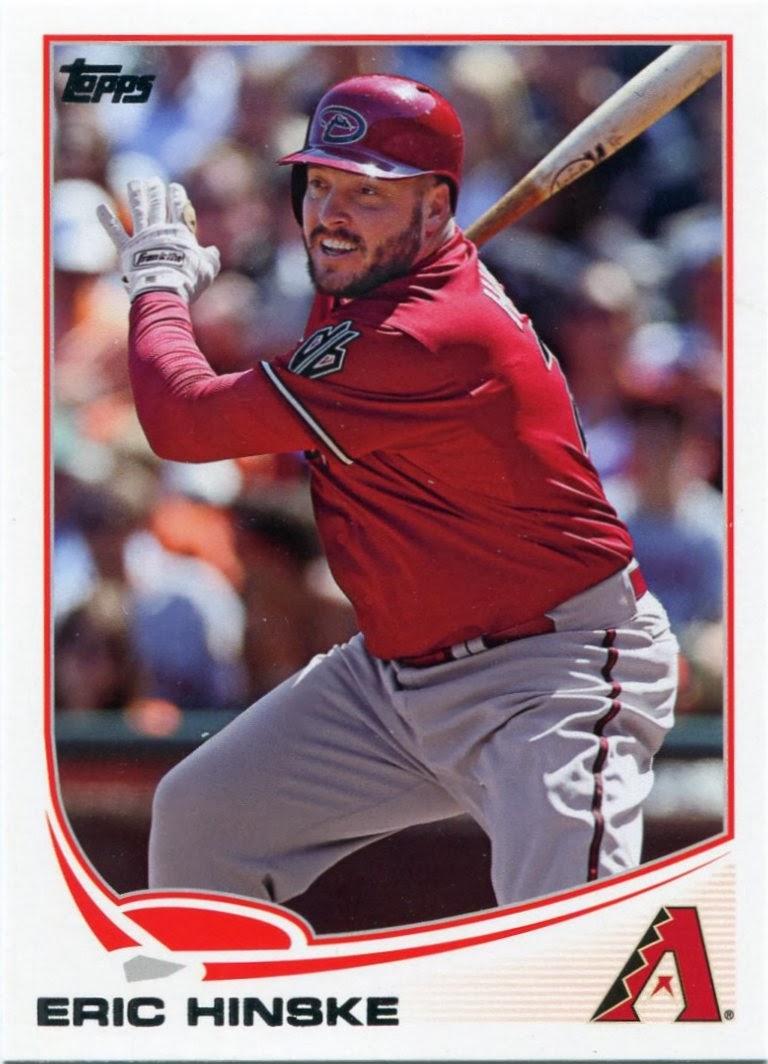 Since he was released in July, Eric Hinske probably shouldn't have been granted a spot in Topps Update.

That said, it was the only card he had all year. Had Topps gone with convention, Hinske would've been eliminated from the Update checklist all together, which means that he wouldn't have had a "sunset" issue of him in an Arizona uniform.

Hinske didn't exactly shine during his time with the Diamondbacks, hitting just .173 with one homer in 52 games with the franchise before his release.

While he's not one of the bigger names on this list, I've always liked Eric Hinske. Though his finale isn't a fantastic card by any means, it would've been sad to see him without a "sunset" piece.

He's set to become the first base coach for my beloved Cubbies, after all. 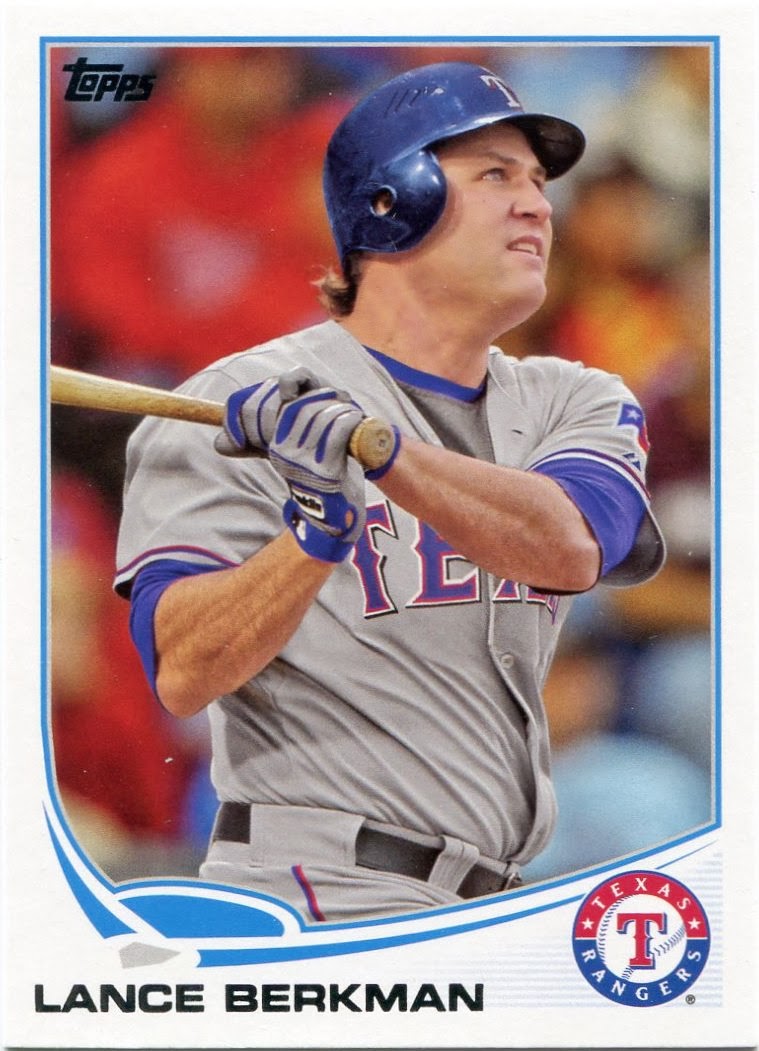 Like Oswalt and Hinske, I'm sure we'll have a tough time remembering Lance Berkman was a Ranger a few years down the road.

In a season plagued by injuries, "The Big Puma" hit .242 with six homers in 73 games in Texas. Topps couldn't even get a shot of him in Ranger gear for his finale, instead going the photoshop route with this one.

Given Berkman's prestigious career, it goes down as one of the bigger "sunset" disappointments in recent years. 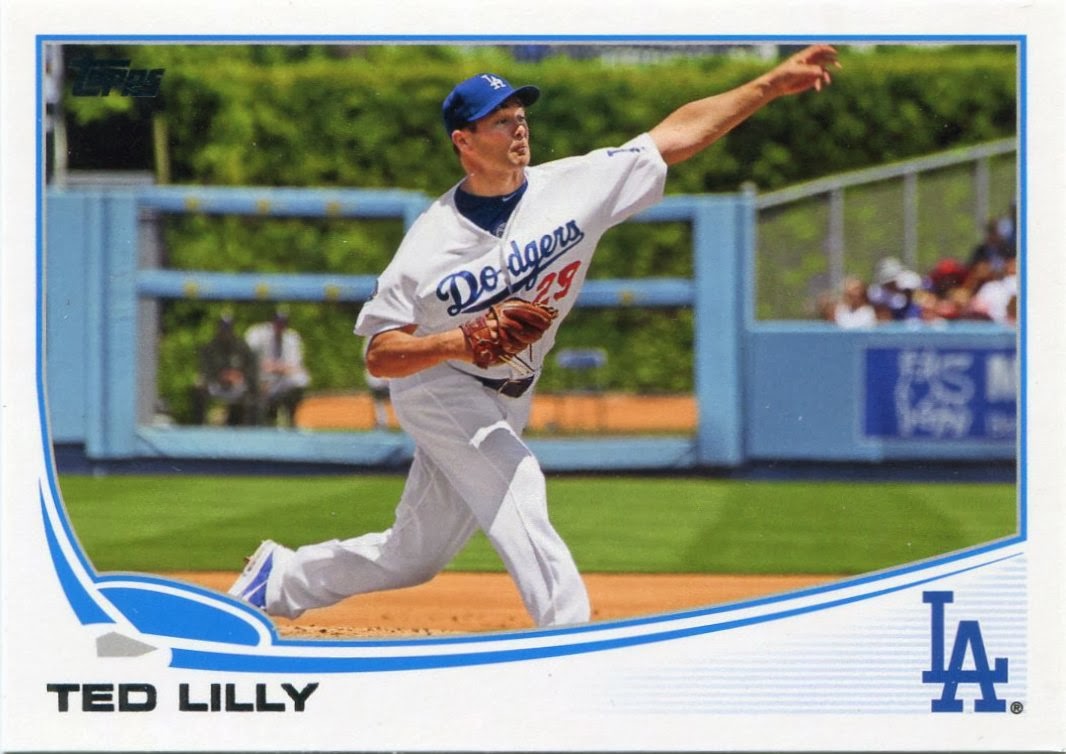 Ted Lilly, on the other hand, received what I think is the most beautiful "sunset" card of 2013.

This spectacular horizontal shot gives the collector a view of Dodger Stadium that isn't seen too often on cardboard.

It's interesting that Lilly received such an amazing card in last year's Flagship checklist, seeing as how he was basically a footnote in the 2013 season. He pitched all of five games with the Dodgers before injuries ended his year and eventually coerced him into retirement.

A great card like this is quite a nice reward for just for such a short span of time. 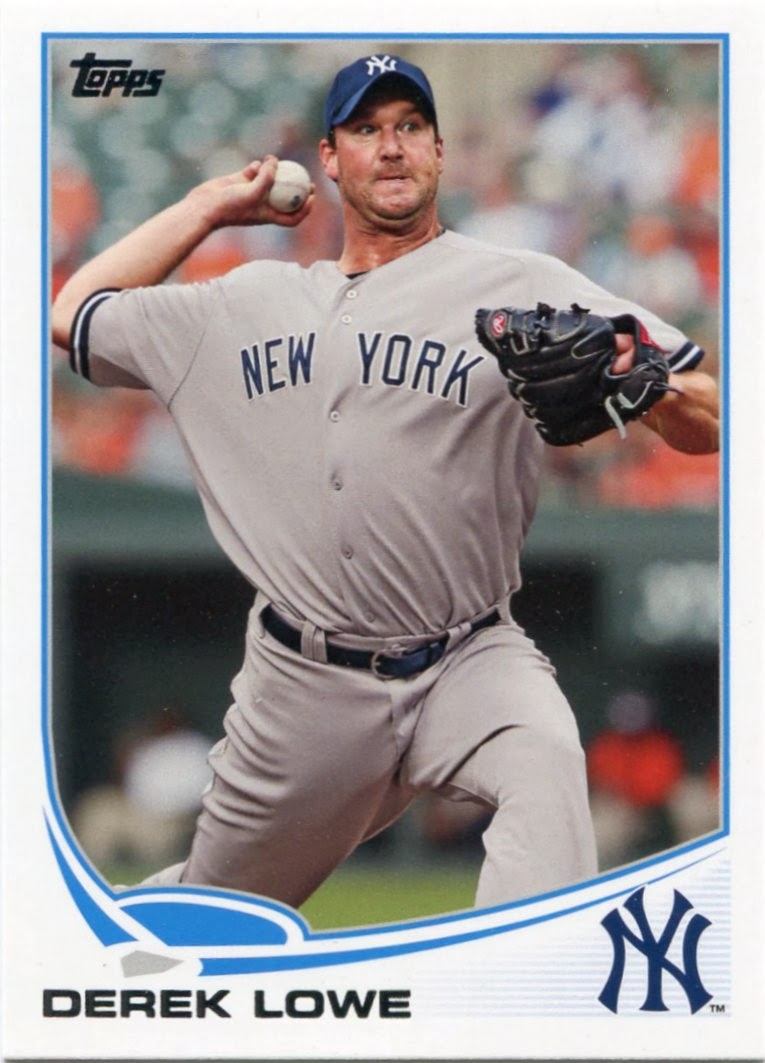 Getting back on to the unfamiliar uniform trail, we have the "sunset" issue of Mr. Derek Lowe.

Though he's featured as a Yankee here, Lowe actually closed out his career with the 2013 Rangers. It was yet another forgettable stint, as he posted a 9.00 ERA in 13 innings with the club before being released in May.

He wasn't in Texas long enough to have a card in the uniform, so Lowe's finale features him during his brief stint with the 2012 Yankees.

Still, he was far from the only Bronx Bomber to bid farewell to the game in 2013. 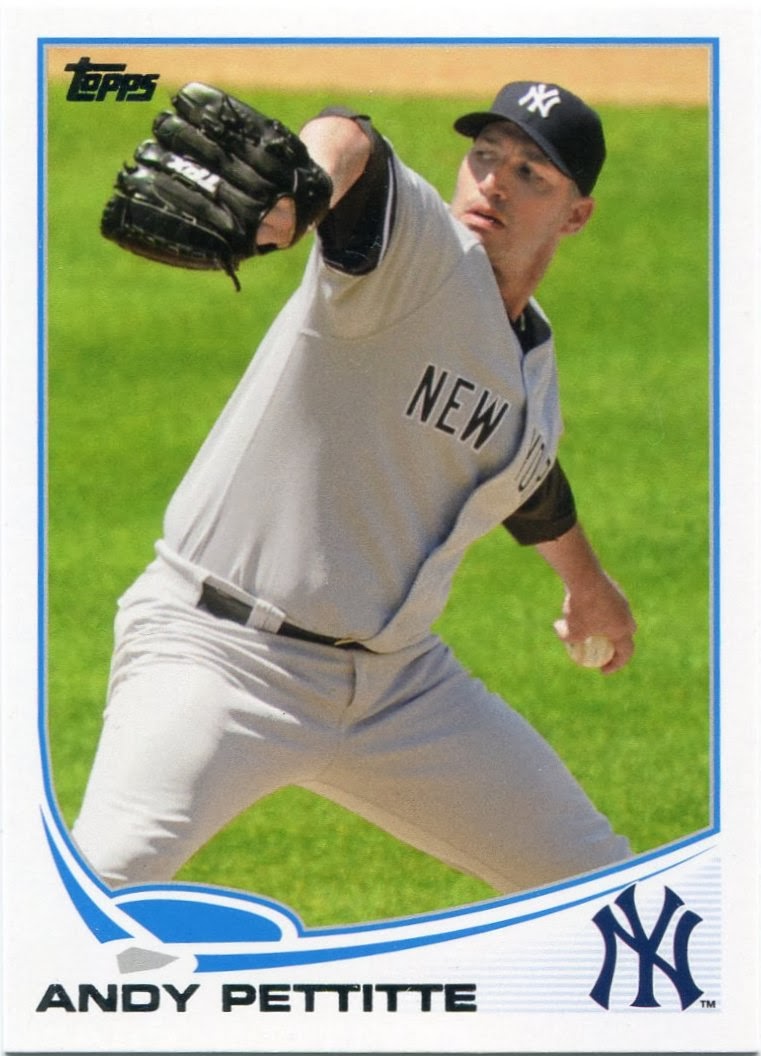 Though it may have been overshadowed by the farewell of Mariano Rivera, longtime hurler Andy Pettitte also kissed the game goodbye after the 2013 season.

While guys like Berkman and Lilly struggled in their final seasons, Pettitle posted a perfectly acceptable 3.74 ERA in 30 games with the Yankees last year. I'm sure he could've lasted another year or two if he wanted.

Topps didn't do anything flashy for Pettitte's "sunset" piece, but it's still a nice pitching shot of someone who may well make it to Cooperstown one day. 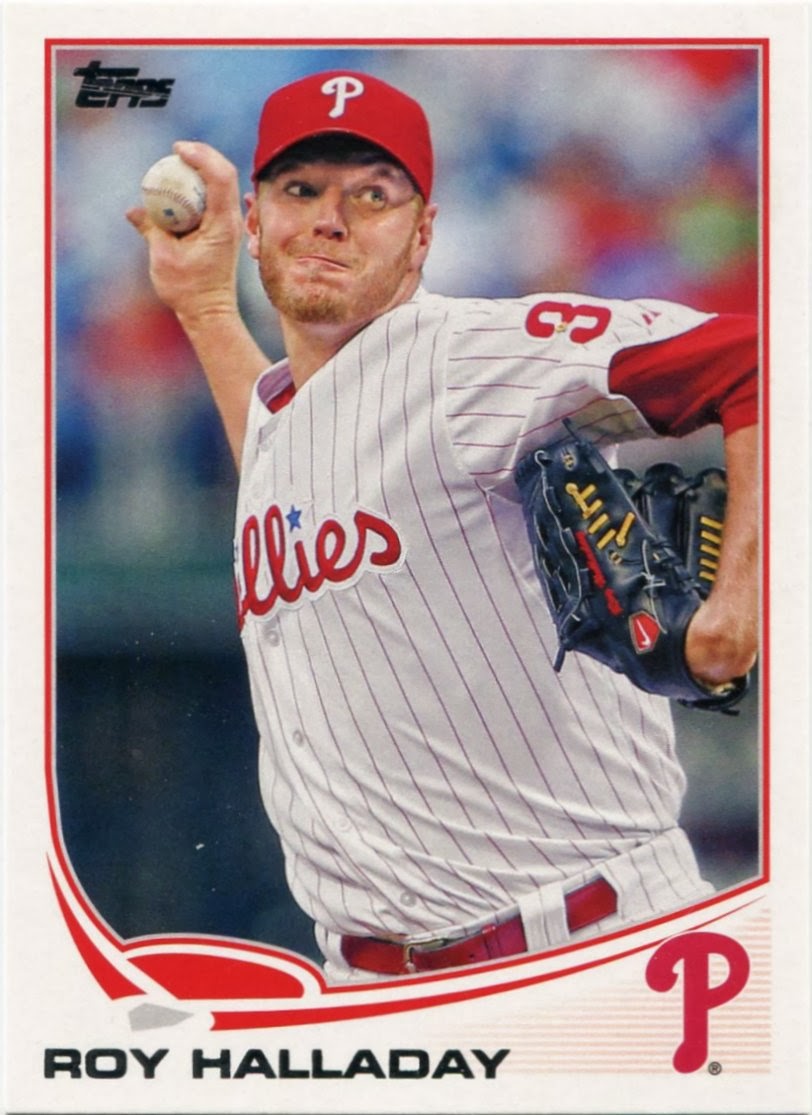 Perhaps the most shocking goodbye was the recent retirement of Roy Halladay.

Just three years removed from a Cy Young campaign in 2010, "Doc" struggled with injuries in 2013. The normally durable pitcher played in just 13 games with the Phillies, posting a dismal 6.82 ERA in his final season.

Not wanting to push things, the 36-year-old Halladay decided to call it quits this offseason.

Though the rather unflattering photo may suggest otherwise, his final card signals the end of the line for arguably the greatest pitcher of the last ten or fifteen years.

It'll always have a special place in my collection for that very reason.
Posted by Nick at 7:01 PM

"Pettitle posted a perfectly acceptable 3.74 ERA in 30 games with the Yankees last year. I'm sure he could've lasted another year or two if he wanted."

Ummm nope. Not since Biogenesis got shuttered.

I must be in the minority because I hated Helton's 2013 card. I am not a fan of the celebration shots that have taken over the flagship ship in recent years, but especially not for either a rookie card or a sunset card. They should be focused on one player only because either you don't know what they look like or they deserve their moment in the spotlight.