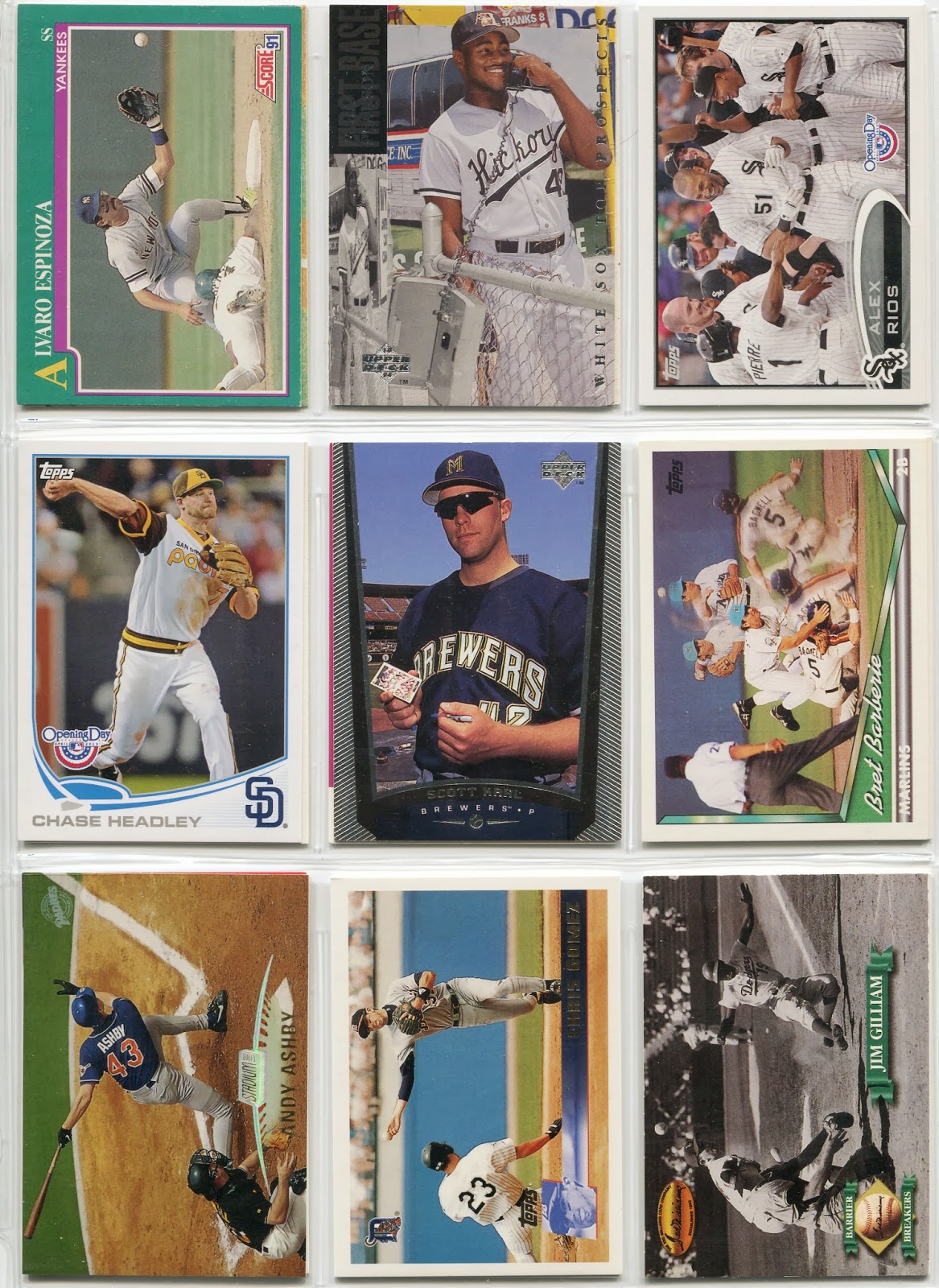 I hear the Super Bowl is today.

I doubt I'll pay much attention to the game. For what it's worth, I'm picking the Seahawks to win it all.

I'll also go out on a limb and say that at least one member of the Red Hot Chili Peppers takes the stage shirtless at the halftime show.

Let's take a look at a new page from this silly frankenset business. 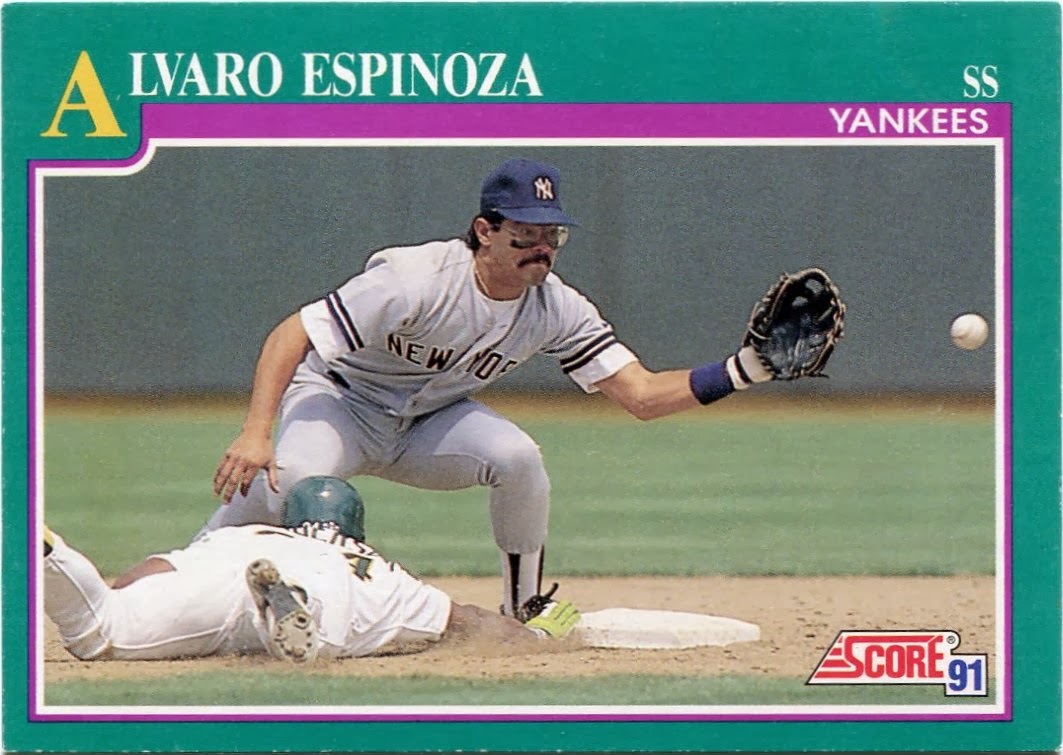 Here's a play you don't see very often on a baseball card.

The pickoff at second.

You may note that the runner sliding back into the bag on Espinosa's magnificent 1991 Score issue is none other than the greatest base stealer of all-time, Rickey Henderson.

Keep that whole "cameo" thing in mind this afternoon.

There are quite a few of them in this frankenset page. 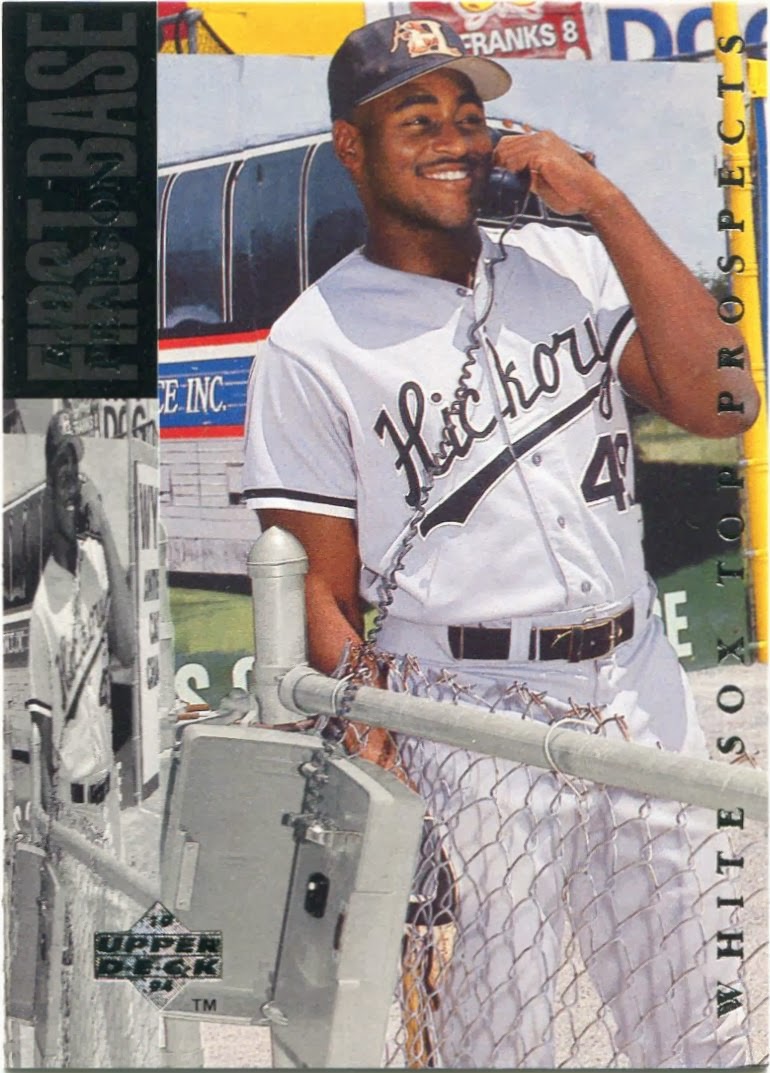 "Excuse me, sir, is your refrigerator running?"

"Well, you better go catch it!"

"Is that you again, Pearson? I thought I told you to never call this house again!" 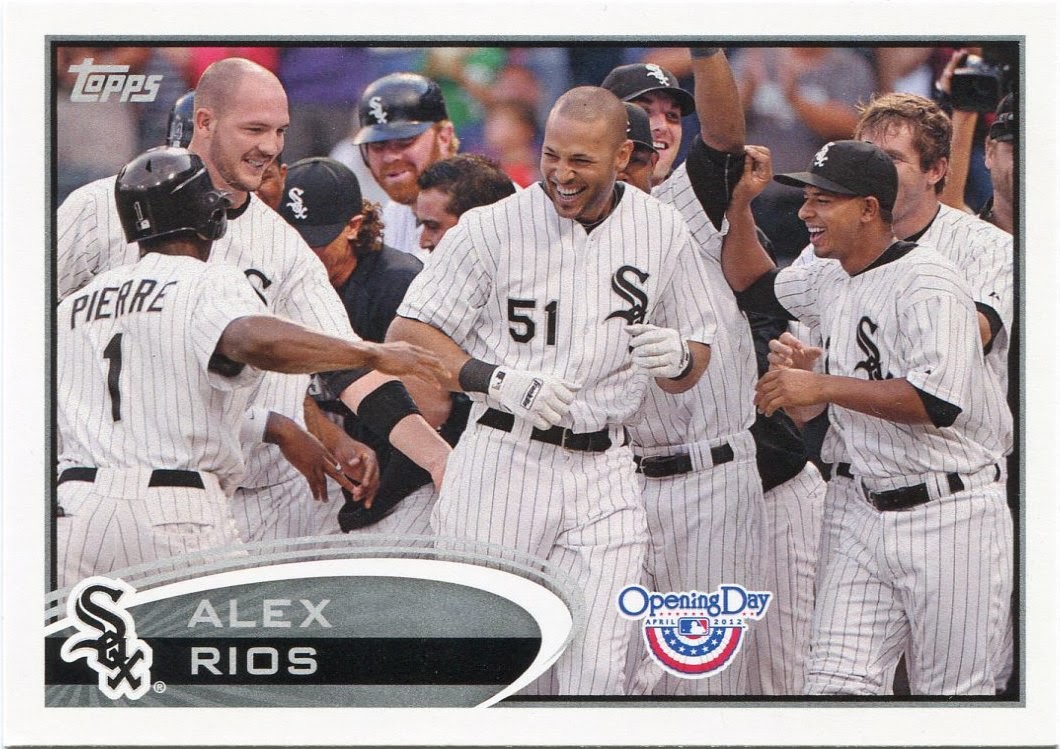 The whole "celebration" fad that has swept through the hobby recently pretty much started in 2012.

There's a whole bunch of them on what has become known as the "surfboard" design, including this terrific Rios. I spy a ton of White Sox cameos here, but my favorite has to be the appearance of Juan Pierre in the foreground.

He sure looks a lot smaller than his South Side teammates. 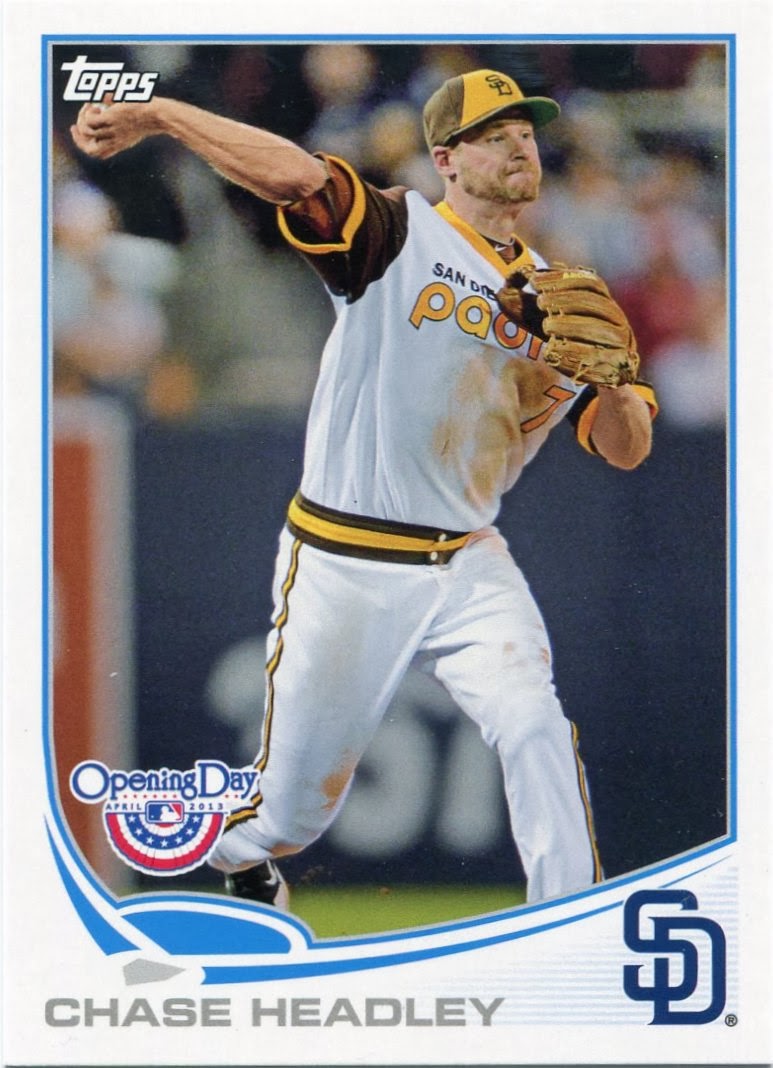 I don't draw the line between some throwbacks and others. I love them all. More importantly, I want them all.

Even if they do feature those brown-and-gold Padres monstrosities. 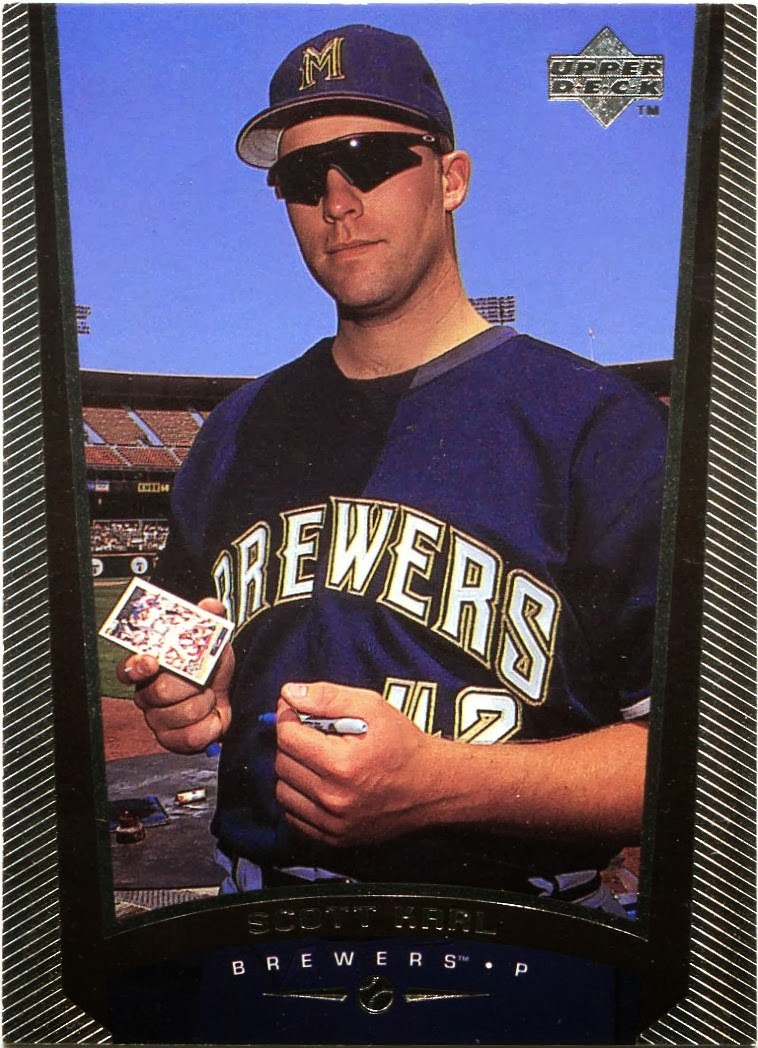 Here's one from what I like to call the "Cardboard Inception" series.

These rare beauties are made when a player is shown holding a baseball card...on a baseball card. Here, former Brewers pitcher Scott Karl is shown in the process of autographing what looks to be his 1998 Collector's Choice issue.

I still think the label fits, though. 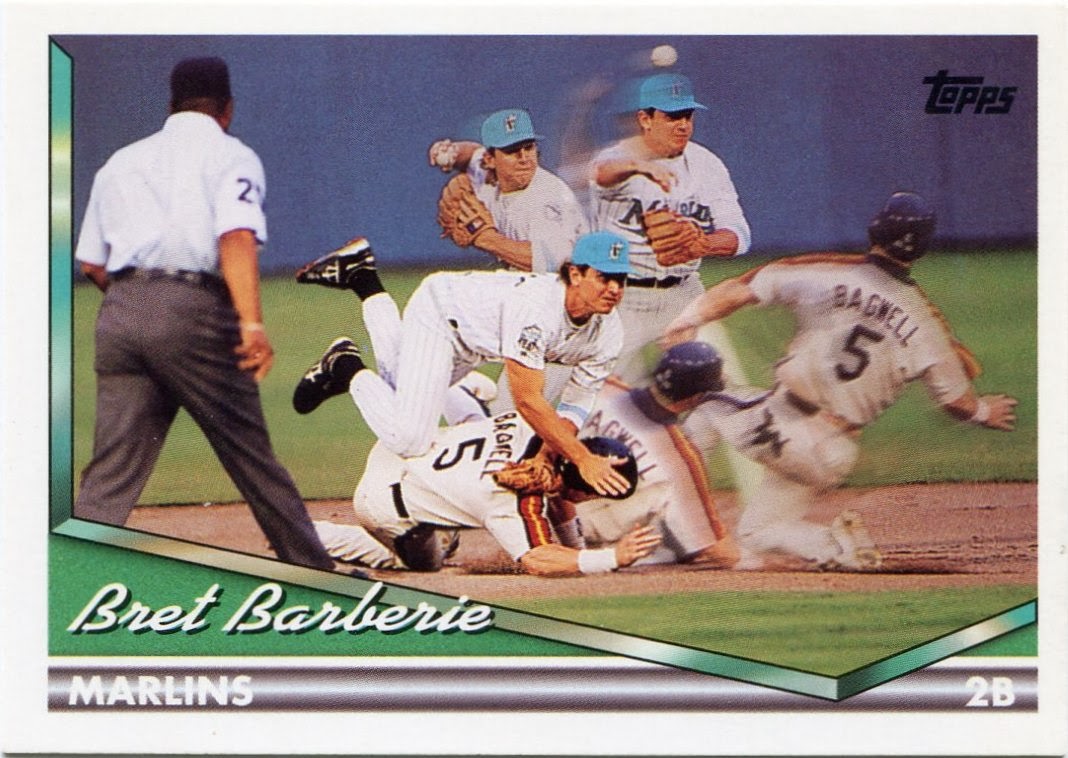 It's a rare "combo" mini-collection hit!

In one of the more epic cards of the mid-1990s, Topps granted Bret Barberie a spot in both my "double dip" and "multiple-exposure" themes. Let's not forget the Jeff Bagwell cameo, either.

It's cards like these that signaled the massive change in photography that we'd see in the latter part of the '90s. 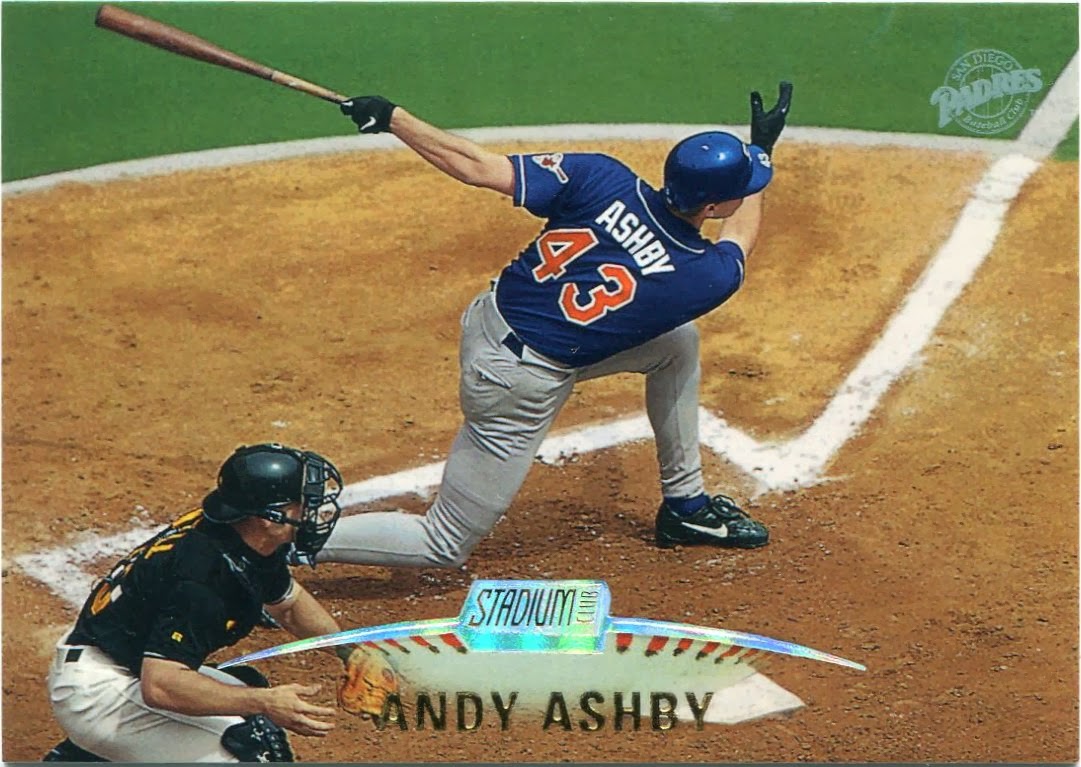 Complete with a Jason Kendall appearance, what we have here is a beautiful piece from my "pitchers at the plate" mini-collection.

It's not everyday that you see these in horizontal form. 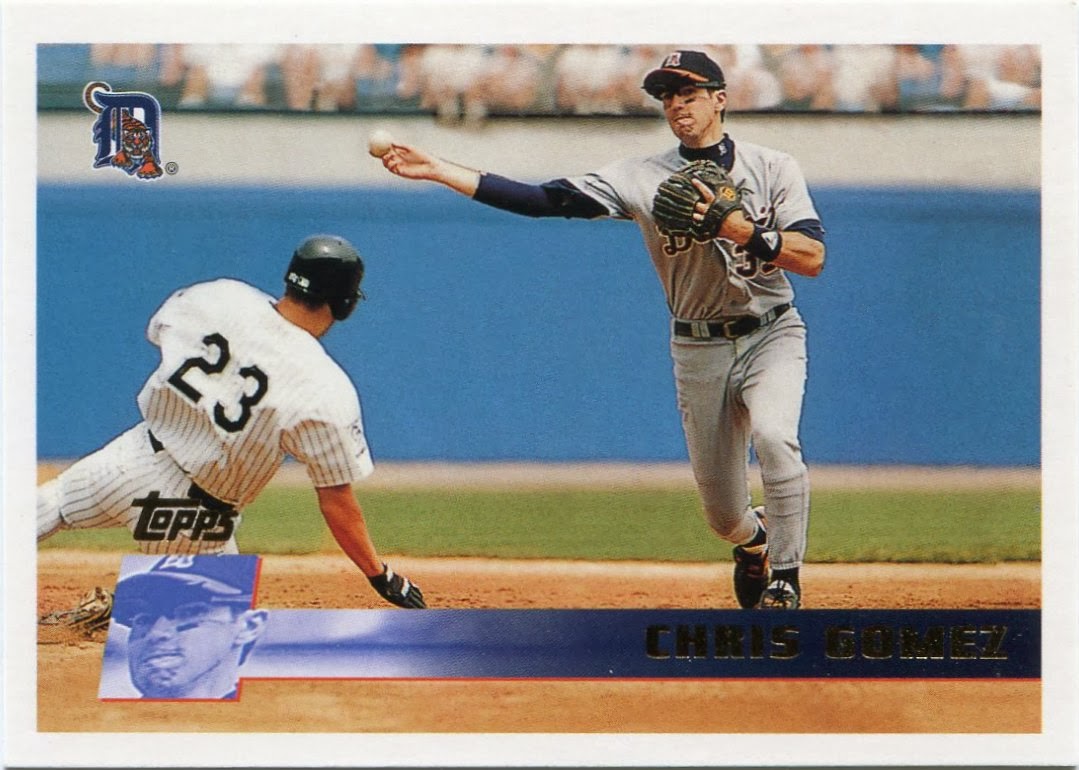 Though 1996 Topps was quite forgettable, this is one of the nicer double play cards I've found. Plus, I'm about 99 percent certain that the baserunner featured here is none other than current White Sox skipper Robin Ventura.

Notable cameos are certainly abound in this frankenset page. 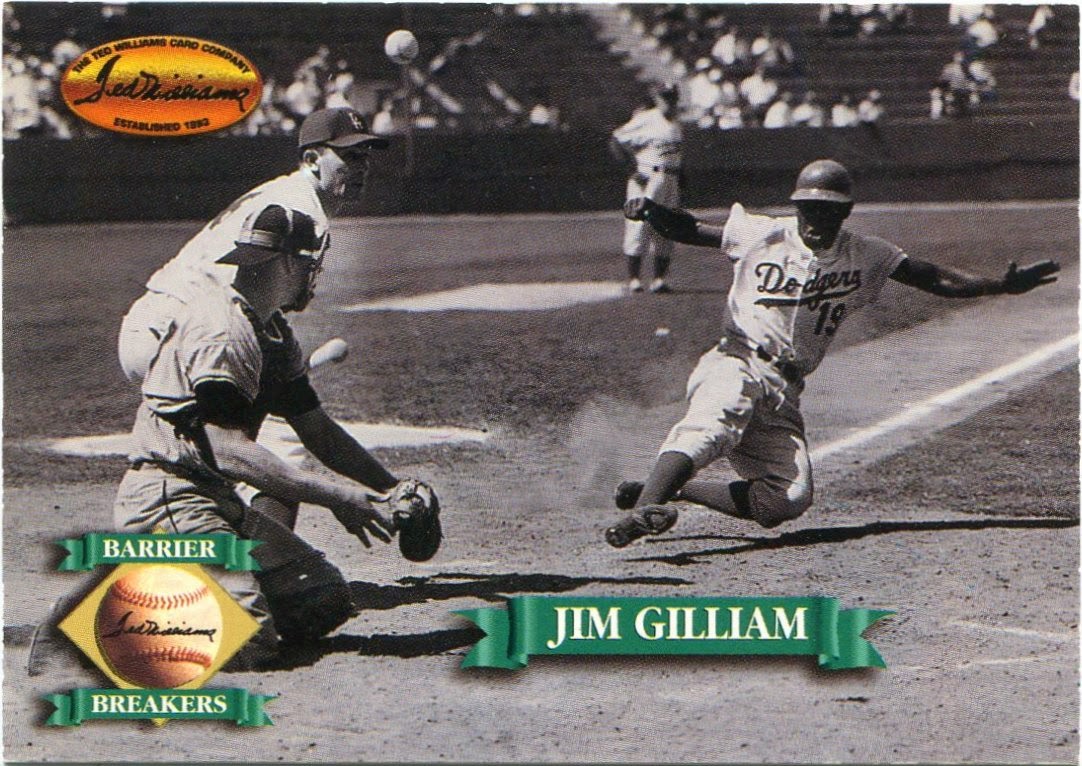 One day down the road, I'll finish up with these frankenset posts.

After all is said and done, I'm sure I'll compose some sort of list of my favorite cards in said frankenset. Though I've tracked down a lot of good ones, you can bet you'll see Mr. Gilliam on that list whenever the time comes.

I first became aware of this beauty thanks to Night Owl's blog oh so long ago. I knew at that moment that it was one of those cards I absolutely needed to have. Luckily for me, a copy popped out of a treasured dime box a couple years ago.

I guess part of what makes it so special is the fact that we don't see a whole lot of majestic action shots from the '50s in this hobby. Mr. Gilliam is part of a rare breed in that regard.

Another thing that drew me to it is the fact that I have almost no idea what is actually going on in this shot. Gilliam is seen ferociously sliding into home, yet the ball is floating above the catcher's head and the Dodger hitter is still at home plate.

If I had to guess, I'd say what we're seeing here is a botched suicide squeeze attempt. But I could definitely be wrong.

What I do know, however, is the fact that Jim Gilliam is one of my proudest frankenset nominees.
Posted by Nick at 3:15 PM

My favorite part of the Kendall/Ashby card? Both players home and away teams (Pirates are at home - the black alternate was only worn at home, and Three Rivers astroturf is unmistakable) are wearing colored jerseys.

Pretty sharp page. I really dig the Espinoza card, especially since it has a Rickey cameo.

I'm guessing that you're right on Gilliam: fouled squeeze attempt, with the catcher automatically moving to apply the tag had the ball been missed. Was looking at a box of these '93 Williams cards on eBay, but too expensive, sadly.

I love that Gilliam card! Also, despite the 'salad tongs' design, I like the 1999 Upper Deck issue for 3 main reasons - Willie McGee has his Sunset card, there's a Mark Portugal card which depicts him in a Red Sox uni, and there's also a card of Heathcliff Slocumb as an Oriole.

Also, Nick, I just remembered that in the 98 Fleer Tradition set, there is a Series 1 card of Shawon Dunston as a Pittsburgh Pirate. Before I got it, I had no idea it existed. If I find another one, it's yours!