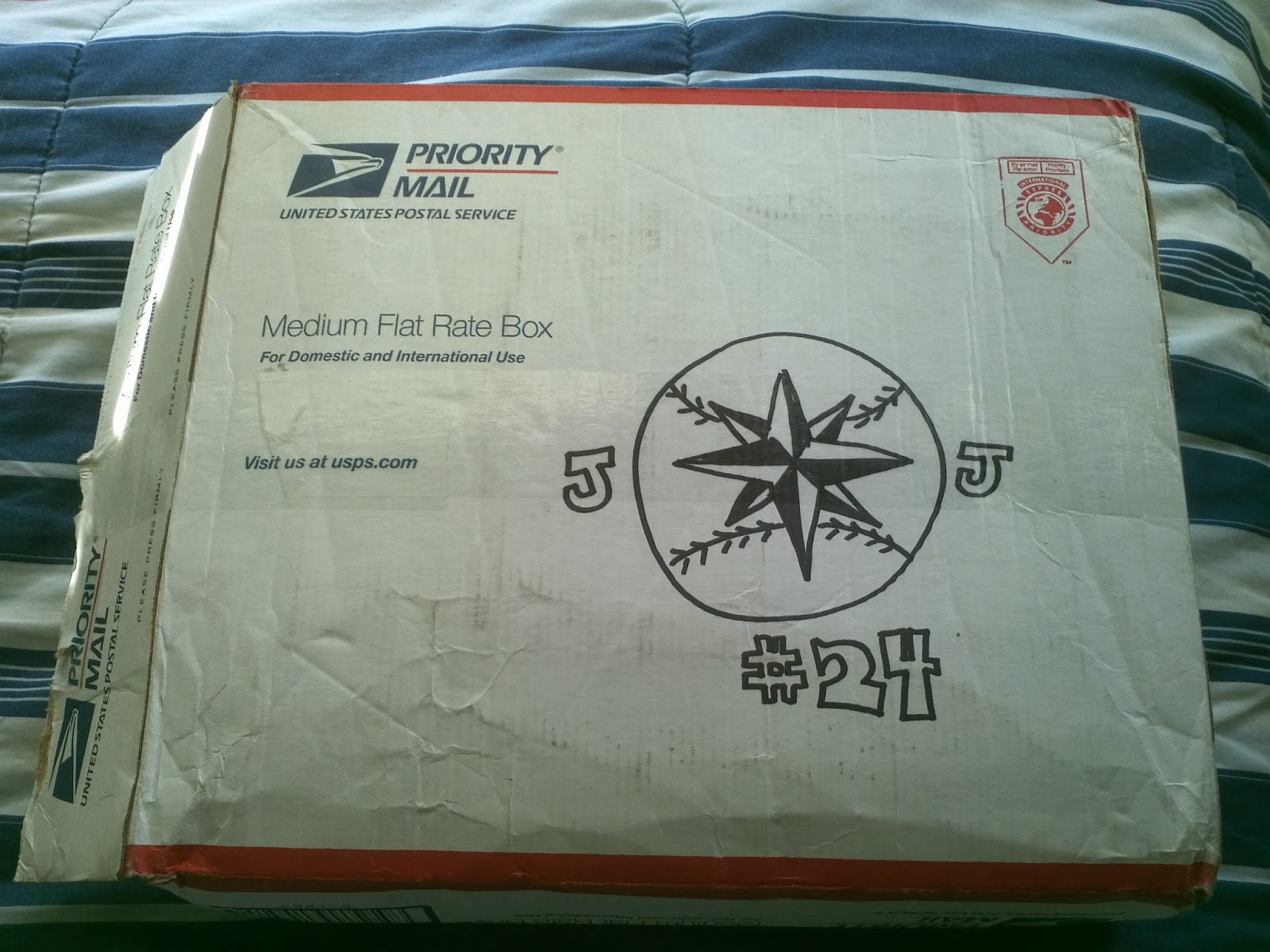 For a long time, I waffled about the idea of starting a blog.

I wasn't sure if I'd want to devote the time and effort to blogging on a regular basis. Plus, I simply didn't know if I had enough to say about the hobby.

And, because I was part of a trading forum at the time, I wasn't sure about acclimating myself to a whole new community of collectors.

In December of 2011, though, I finally found the courage to start the very blog you're reading now. And, let me tell you, it was one of the better life decisions I've ever made.

Even almost two whole years later, the rush of blogging hasn't worn off in the slightest.

I've had a few people ask me for advice about maintaining their blog or whether they should start one at all. For new bloggers, all I can say is just post about what you like. That's really all that matters when it comes to this business.

And, if you haven't yet started a blog and have the time and resources to do so, well...

Not only will you get to talk about the hobby, but you'll also meet the most fabulous community of collectors on the planet. 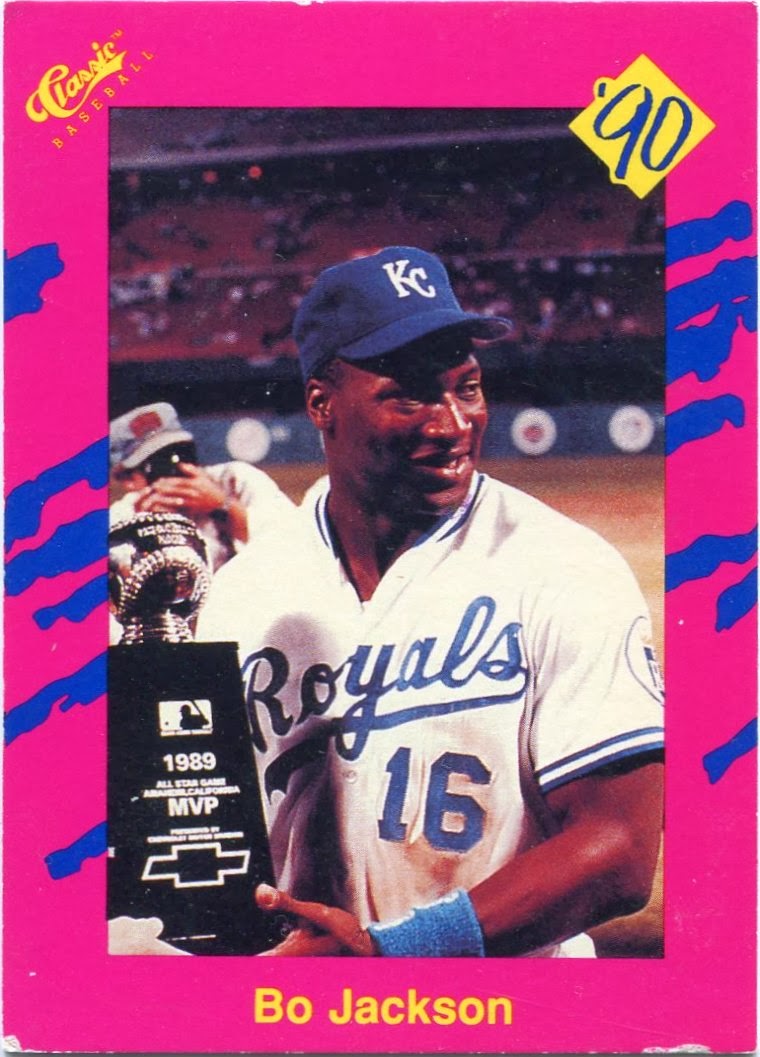 One of those great community members is T.J., author of one of my favorite blogs, "The Junior Junkie".

If you couldn't tell from the photo at the top of the post, he recently dropped an absolutely gargantuan flat rate box of goodness on me.

Much to my pleasure, I found a few stacks of terrific cardboard inside. So much, in fact, that I couldn't fit it all into one post. (There was a reason they came in a flat rate box, but more on that in the second part of these posts.)

When you start a blog, you develop a voice in the hobby. People start to know who you are and what you collect through your posts. I never really got that feeling when I was on the forums.

Thanks to my writings, some people pay attention to my many mini-collections. And, if I'm lucky, fellow collectors will actually dig up a few to send my way.

T.J. is one of those generous souls. He started off the mini-collection fun with this fantastic "Award Show" hit, one that shows Bo Jackson reaping the benefits from his famous '89 All-Star Game performance.

It's also the first pink-bordered card I've received in a long, long time. 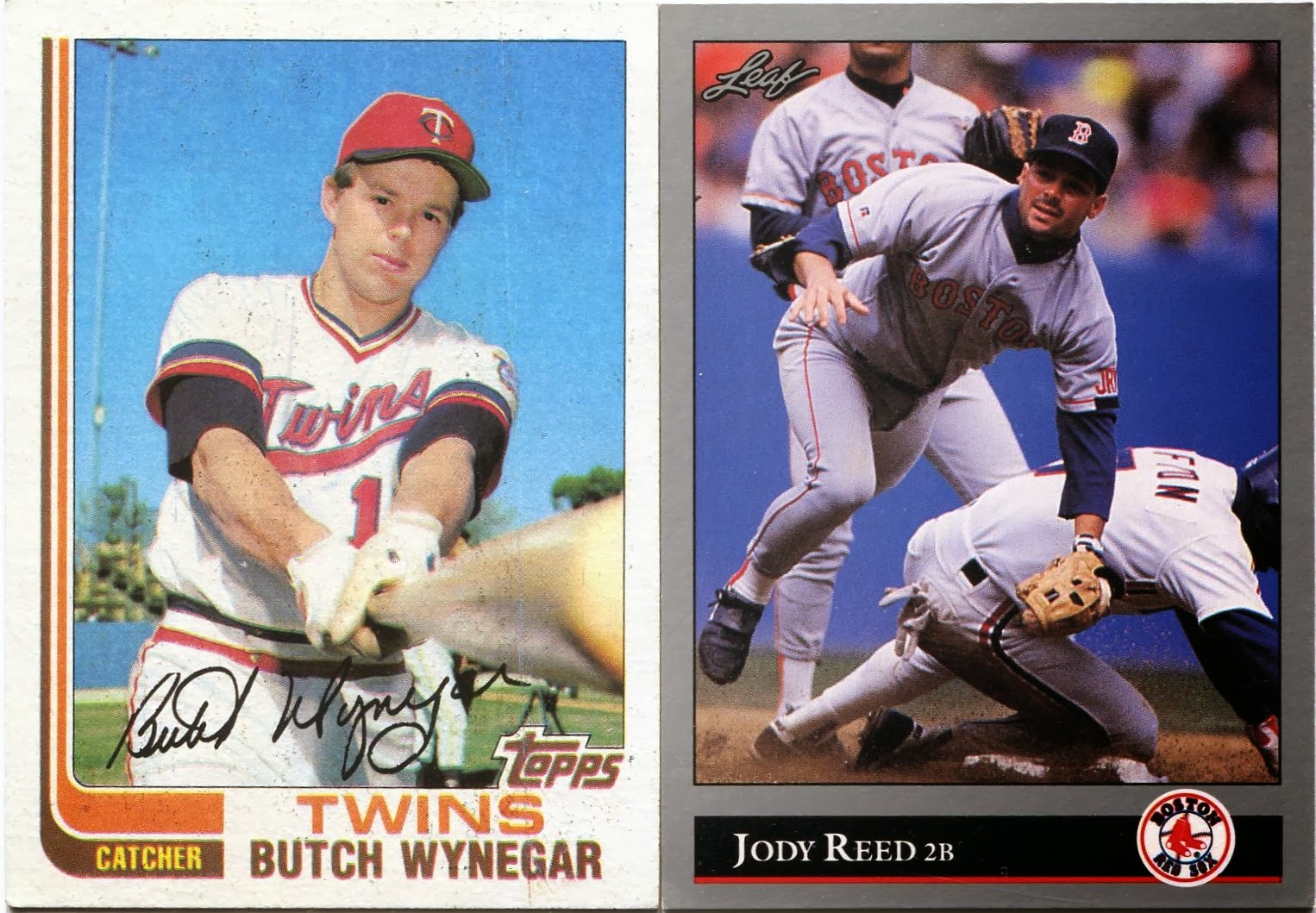 The Reed earns bonus points for the Kenny Lofton cameo. 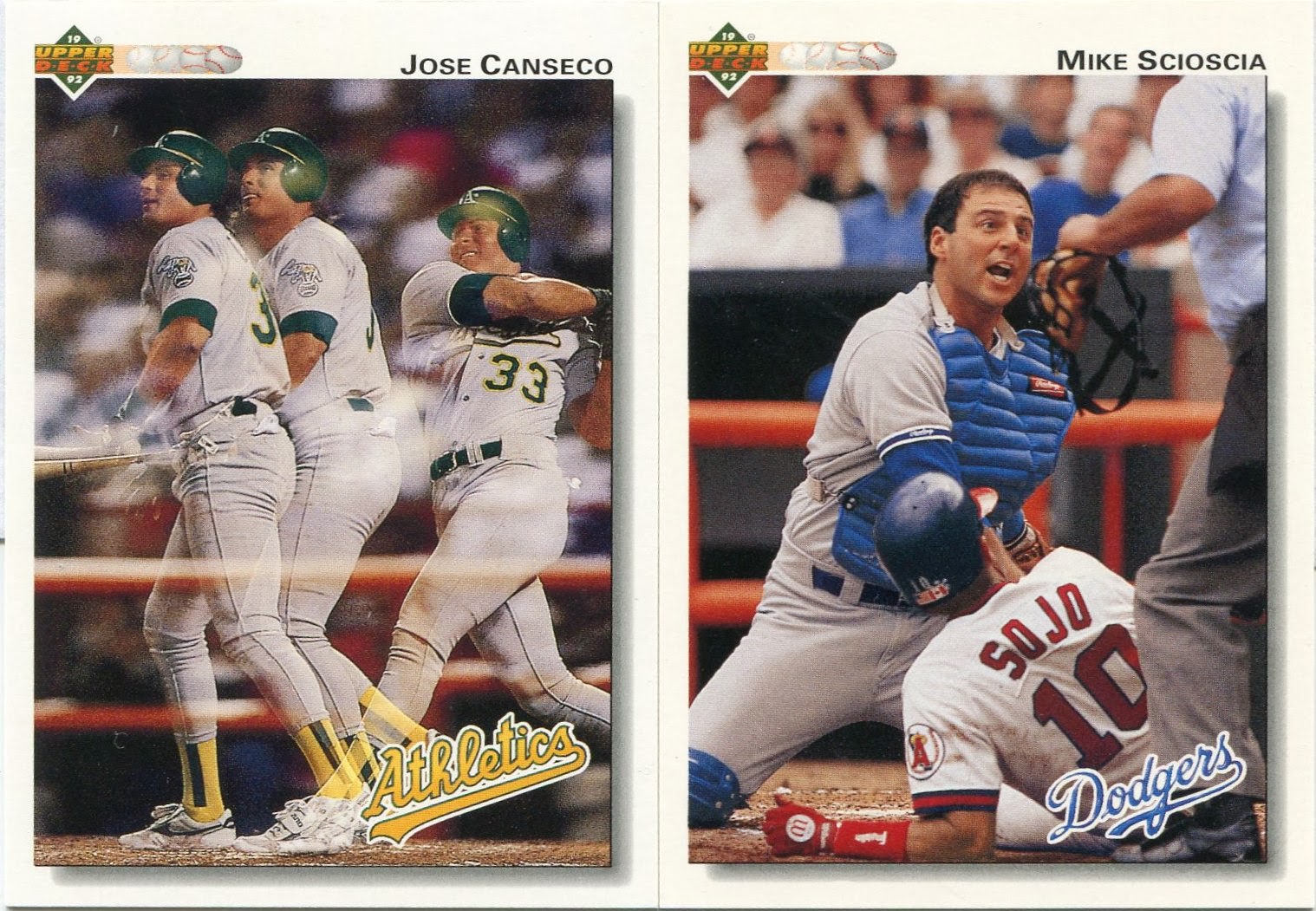 One of the issues I sometimes face with the mini-collection business is welcoming cards of players I can't stand.

That's certainly the case with Jose Canseco. But, as I've decided, mini-collections trump hatred. The Canseco is a great new addition to my "multiple-exposure" theme.

It's a lot easier when people send me cards of guys I already like, such as Mike Scioscia.

From the looks of it, I think we have a play at the plate and an argument on that one. 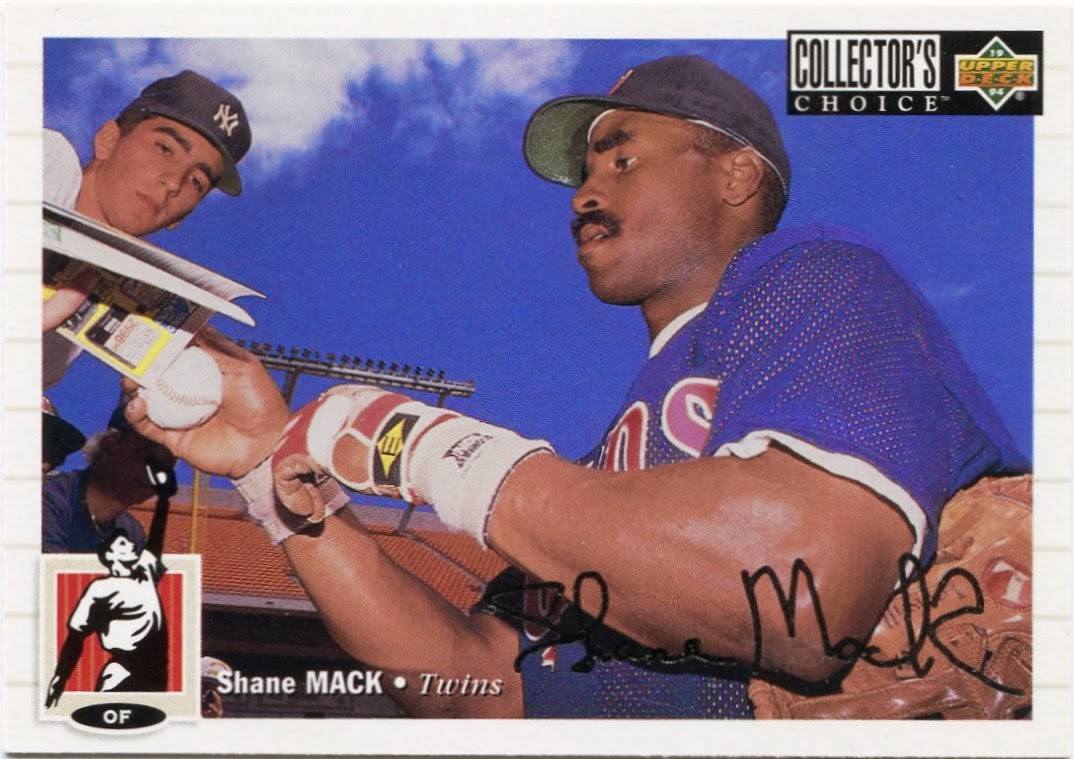 I've lost count of the number of new "autograph" shots the blogging community has found for me.

Thanks to people like T.J., I've found way more than I ever could've imagined. 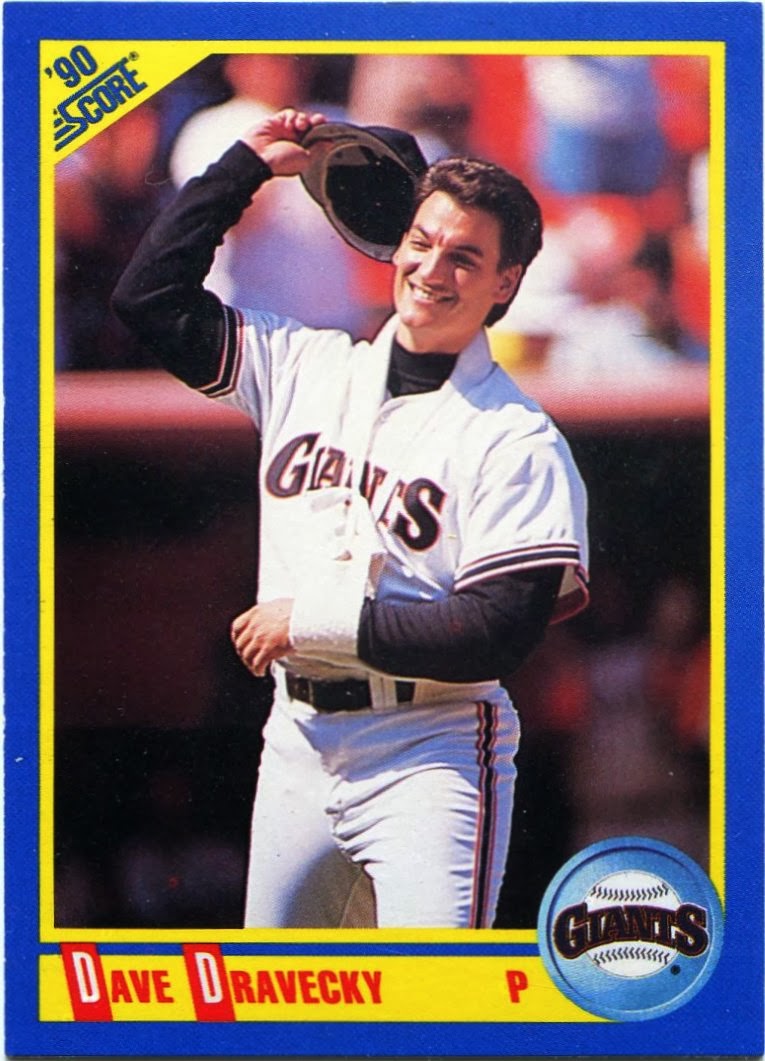 While you may make explicit references to things you collect in your posts, people may just start send you things they think you might like after a while.

T.J. sent over a ton of random goodies, and hit with almost all of them.

I'm a little surprised I'd never seen this Dave Dravecky before T.J. came along. It's easily the most courageous "sunset" card you'll ever find.

After having a cancerous tumor removed from his arm, Dravecky made an unprecedented return to the mound in 1989. Sadly, he ended up breaking the arm in only his second start after the surgery, an injury which eventually required it to be amputated.

Even with his arm in a sling, though, Dravecky is seen here happily tipping his cap to the Giants faithful.

With a story like that, the fans should've been tipping their caps to him. 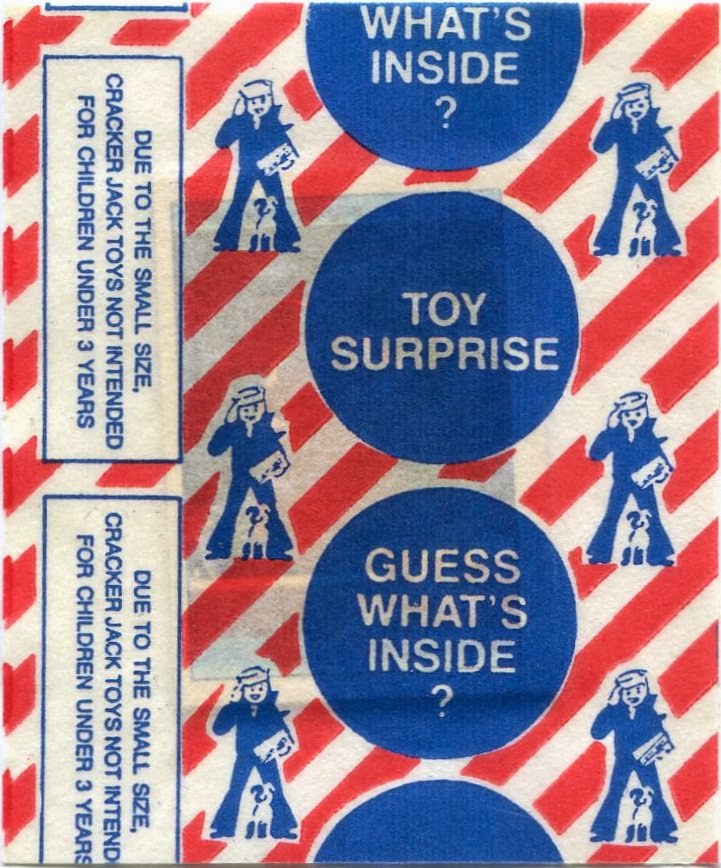 This was certainly a new one.

I'd received a few of the microscopic Cracker Jack cards from the early '90s in prior trade packages, but I'd never seen one in its original packaging before.

So, who was the grand prize? 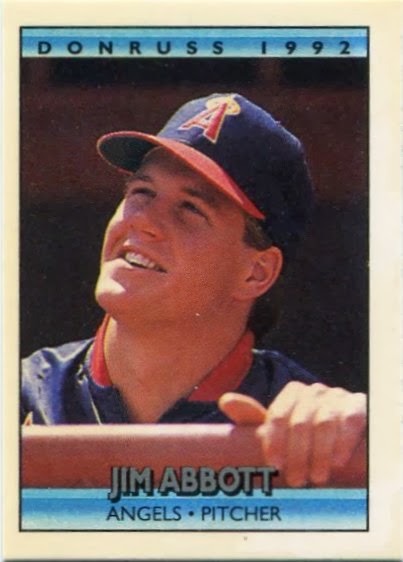 Why, it's Jim Abbott! 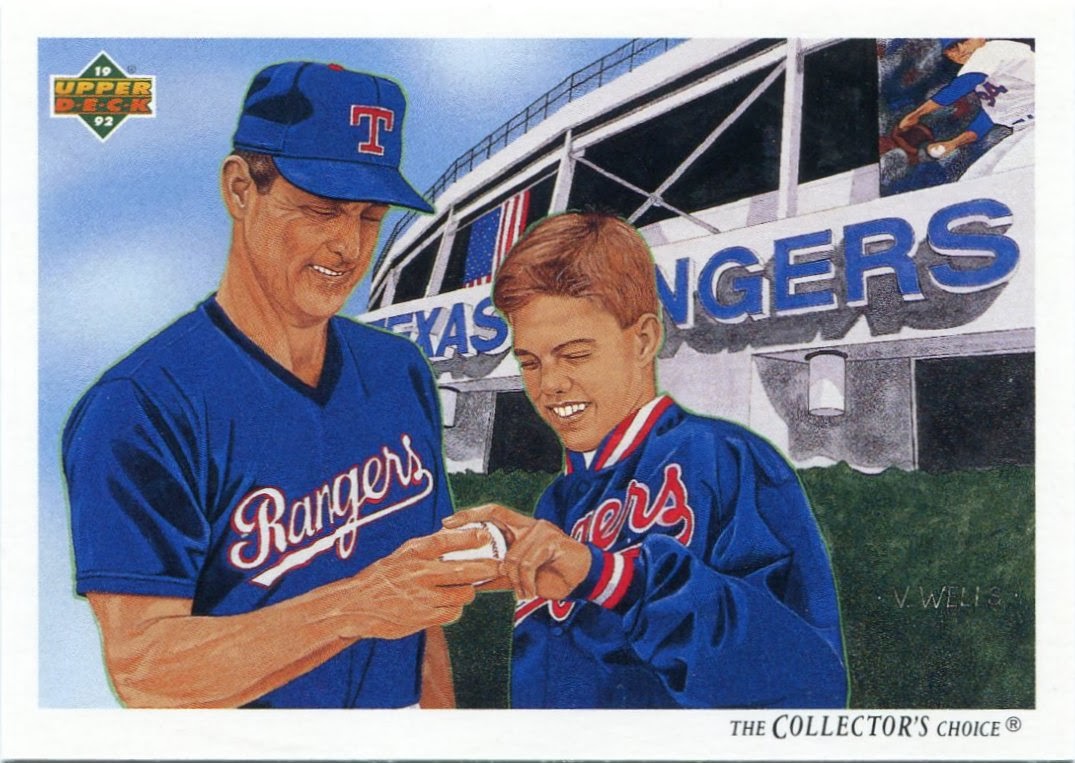 This card creeps me out.

I'm not exactly sure why, but it does. 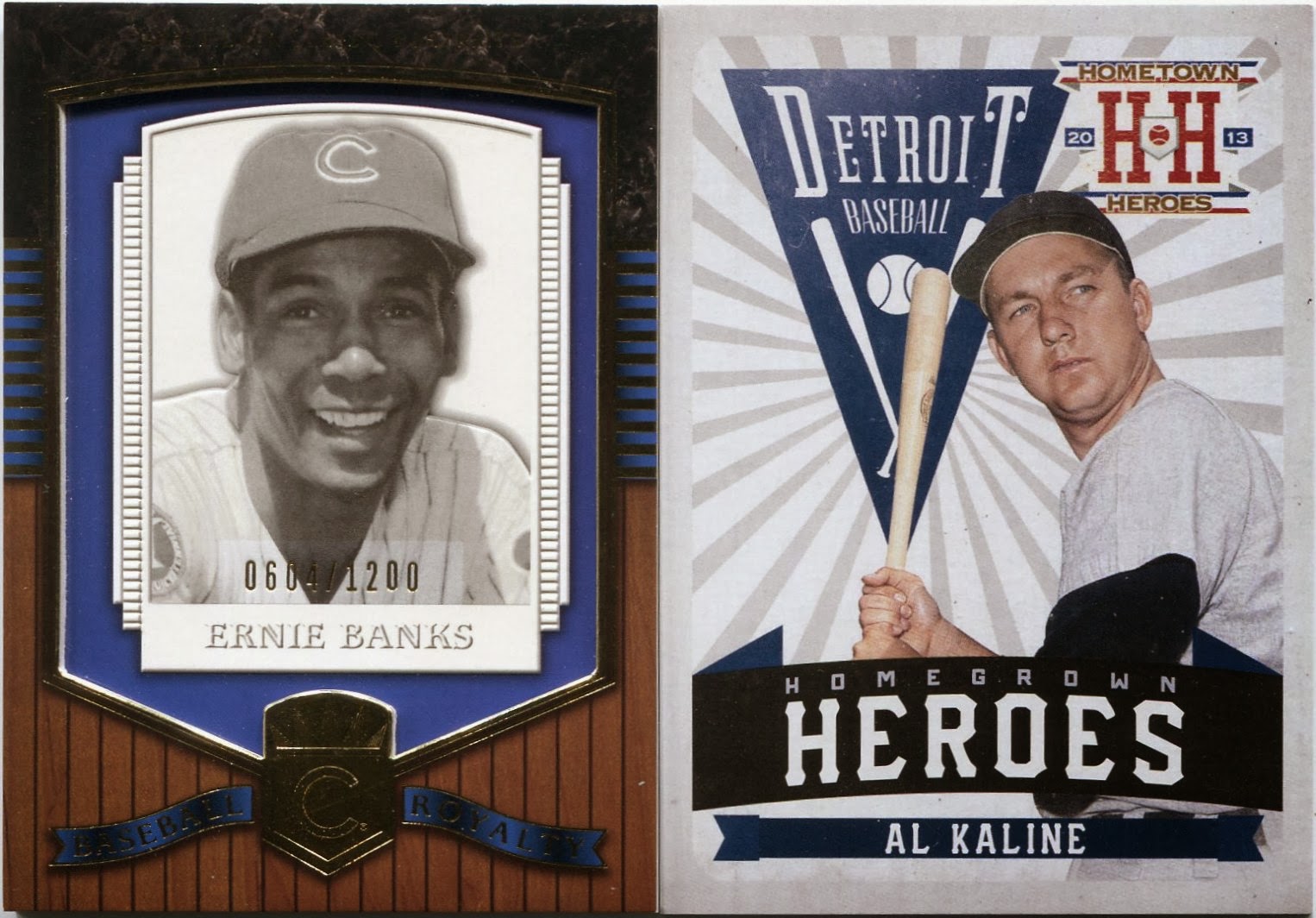 By now, a lot of people seem to know that I collect Hall of Famers.

T.J. added a couple stunning new pieces to that little collection of mine with these two. Though it's tough to tell from the scan, the Banks is about as thick of a card as you'll ever find.

Plus, I see someone's been opening some Hometown Heroes. 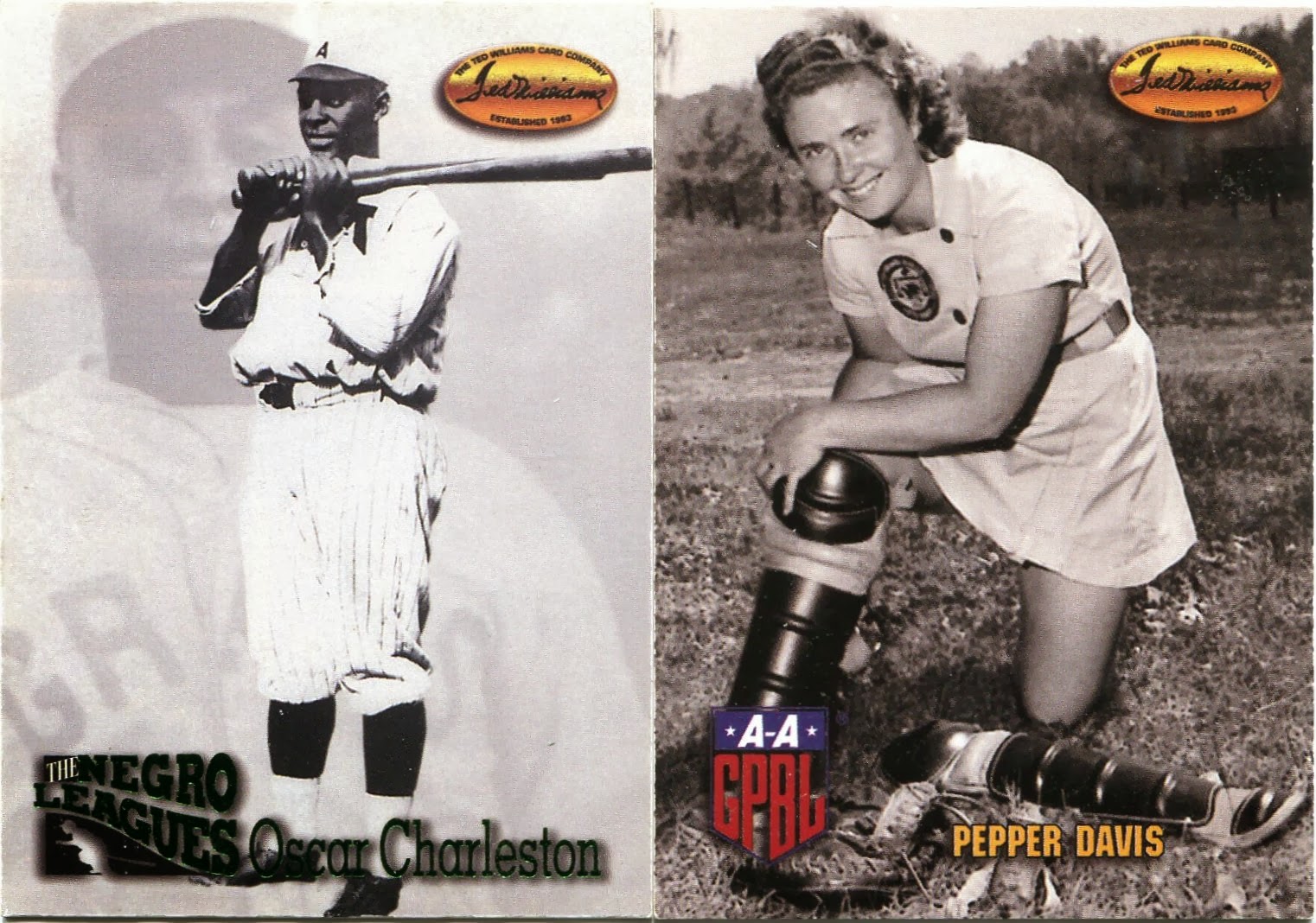 Some of my earliest cardboard memories are tied to the sometimes forgotten Ted Williams brand.

During his semi-annual vacations to Memphis, my dad would often bring home packs of these from a card shop he found in the city.

For those of you into past heroes of baseball, this is a set I'd definitely recommend. It even sprinkles a few Negro Leaguers and ladies from the All Girls' Professional Baseball League into its checklist.

That's the makings of a legendary set right there. 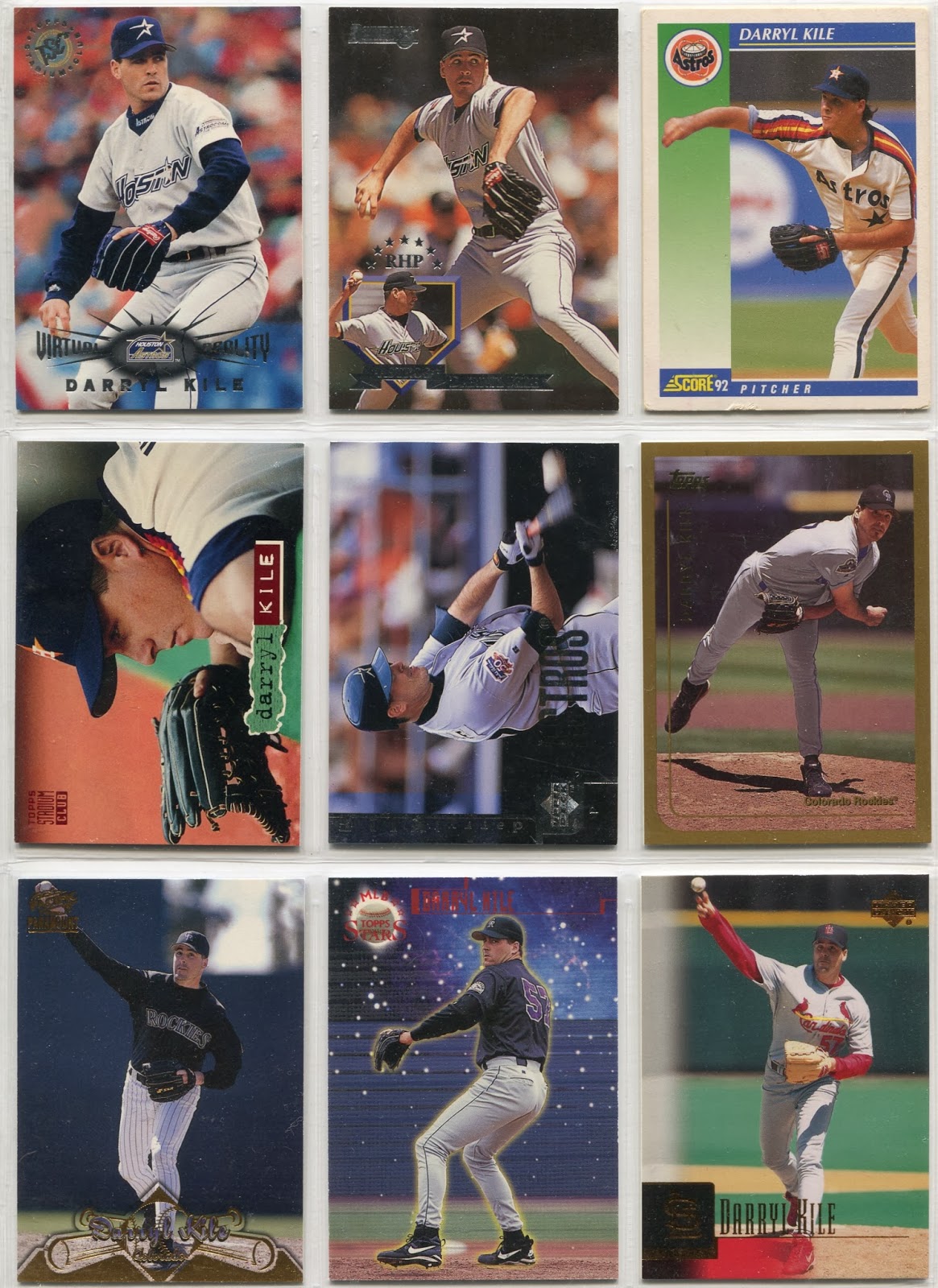 I'm not sure exactly when, but I mentioned my Darryl Kile collection in passing during one of my earlier posts.

Ever since then, I've had an absolute barrage of Kile cards hit my doorstep. T.J. sent along enough to fill a binder page, including a new "pitcher at the plate" specimen at the center.

Other than maybe Vladimir Guerrero, I've received more cards of Kile than any other player during my time as a blogger. 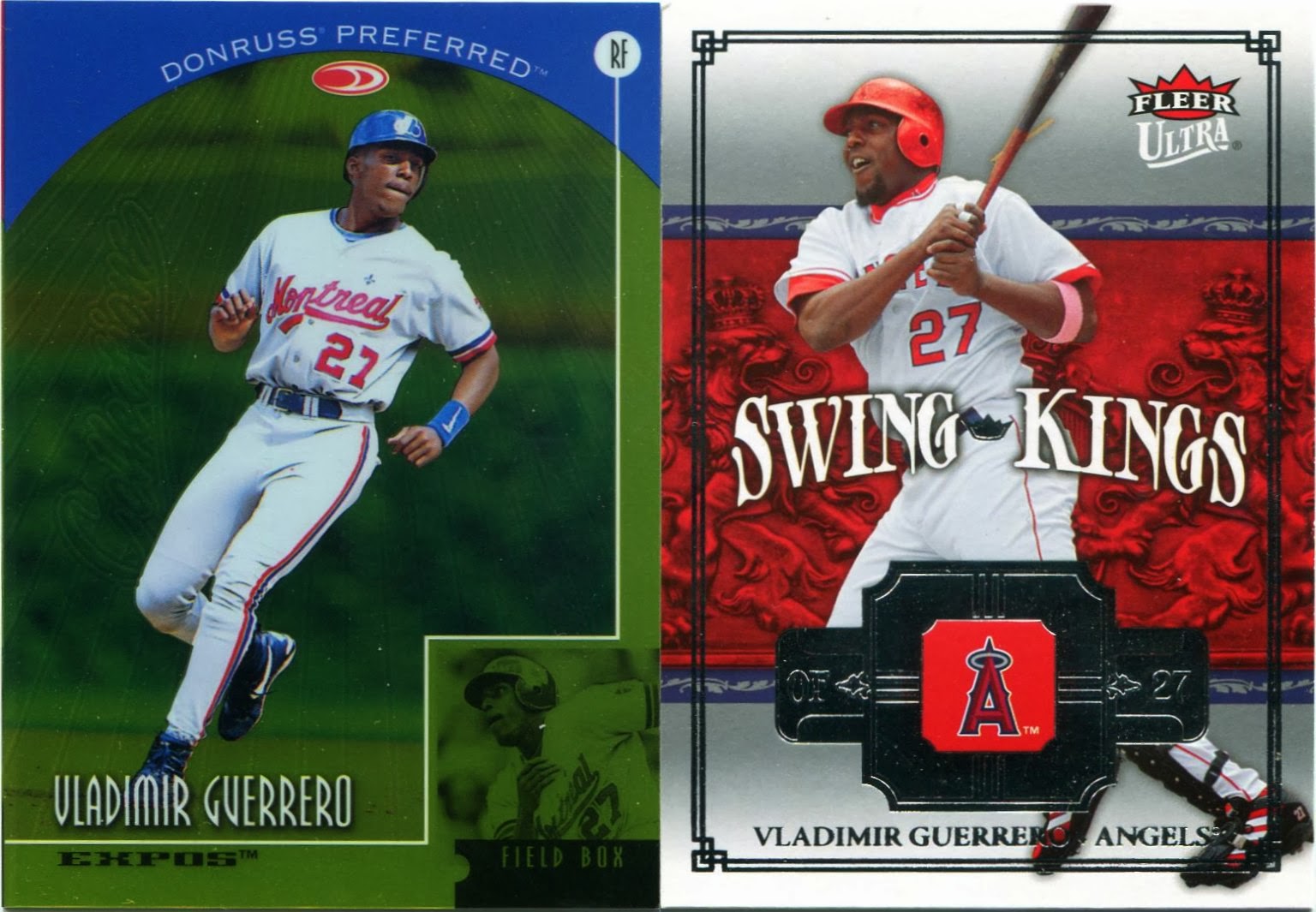 To go along with the pink of the Bo Jackson and the blue of the Dave Dravecky, the Vlad on the left is probably the most green-dominated baseball card I own.

On the right is easily one of the more over-the-top insert designs I've ever seen.

The Ultra brand got a bit desperate during their later years. 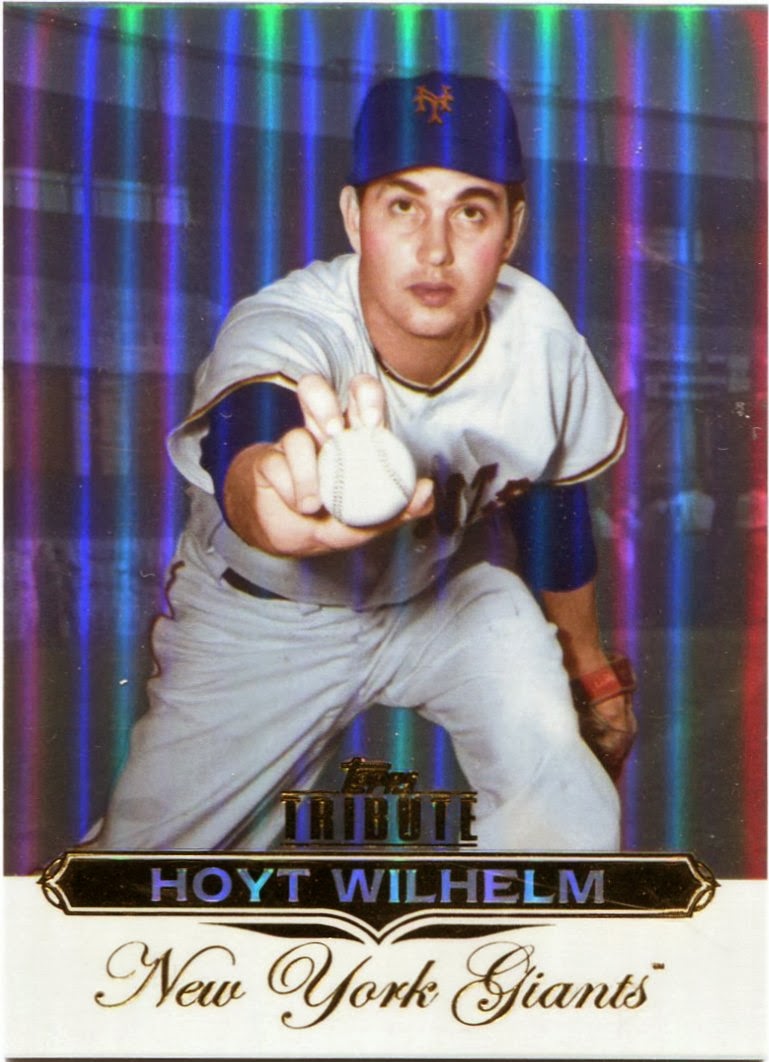 Topping off the grand array of cardboard T.J. sent was this beautiful new addition to my Hoyt Wilhelm collection.

Normally, I'd try and convey the awesomeness of this card through words. But, in the case of Mr. Wilhelm here, I think you need to own a copy to truly appreciate its beauty.

Words wouldn't be able to do it justice.

Though I've posted about my love for the blogosphere many times in the past, that's the kind of feeling I have towards this place.

It's just too tough to describe how much I appreciate my tenure as a blogger through words. It's not possible.

You're just going to have to start one for yourself to find out.
Posted by Nick at 1:43 PM

Does a "Hey, mister! Can I have your autograph?" card (is that really the name of the collection?) get bonus points when it features a facsimile autograph, particularly in parallel form such as the silver sig Mack here?