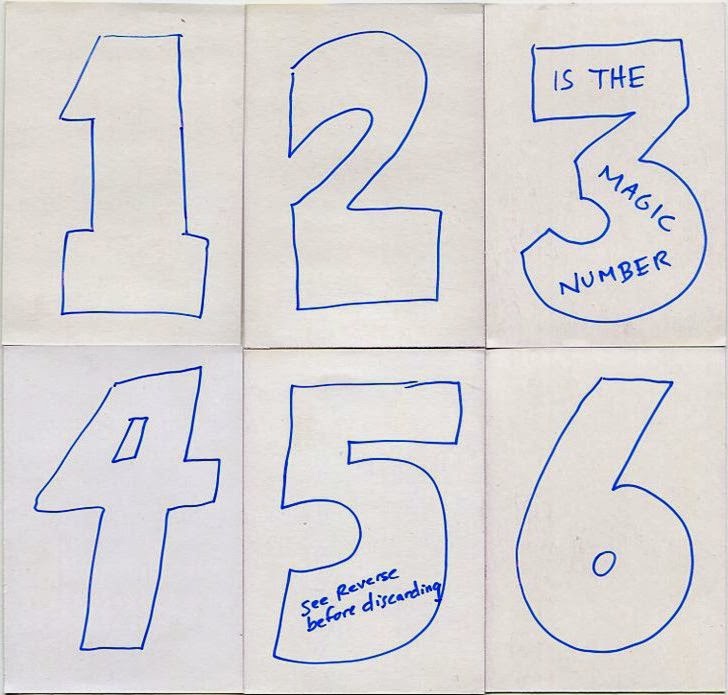 I never thought I'd see the day where I'd see an upside-down exclamation point on this blog.

In this instance, though, it's more than appropriate.

You see, "¡Viva La Random!" has been the rallying cry of both myself and Ethan, the most Random collector I've met in the blogosphere. He's the mind behind the fantastic blog "Playing With My Cards".

Before I joined this place, I didn't think people like him existed. I've found that with this blog (which is now on Facebook, by the way) and other fellow "Randomites" like Ethan, Random is alive and well in the collecting universe.

I have a ton of respect and support for team and/or set collectors. I really do. But that sort of thing just isn't my bag, baby.

If anyone knows how to put together a Random trade package, it's Ethan. He recently dropped an unbelievable assortment of cards onto my doorstep.

In fact, when I opened the package he sent, two smaller packages fell out of it, labeled "Uno" and "Dos". So, in the first part of yet another two-part trade post, we'll be taking a look at "Numero Uno".

All told, the two packages contained six team bags of cardboard. Ethan labeled each one, directing the order in which they should be opened.

Yes, I adhered to his instructions. Plus, just like the last time around, Ethan included a ton of wonderful, thoughtful, and hilarious hand-written notes to go along with all the cards he sent.

Going through each stack was like starting a new chapter of a really good book. Just by these alone, you can tell Ethan put a lot of thought and care into building this trade package.

But he also sent a heckuva lot of awesome cardboard. 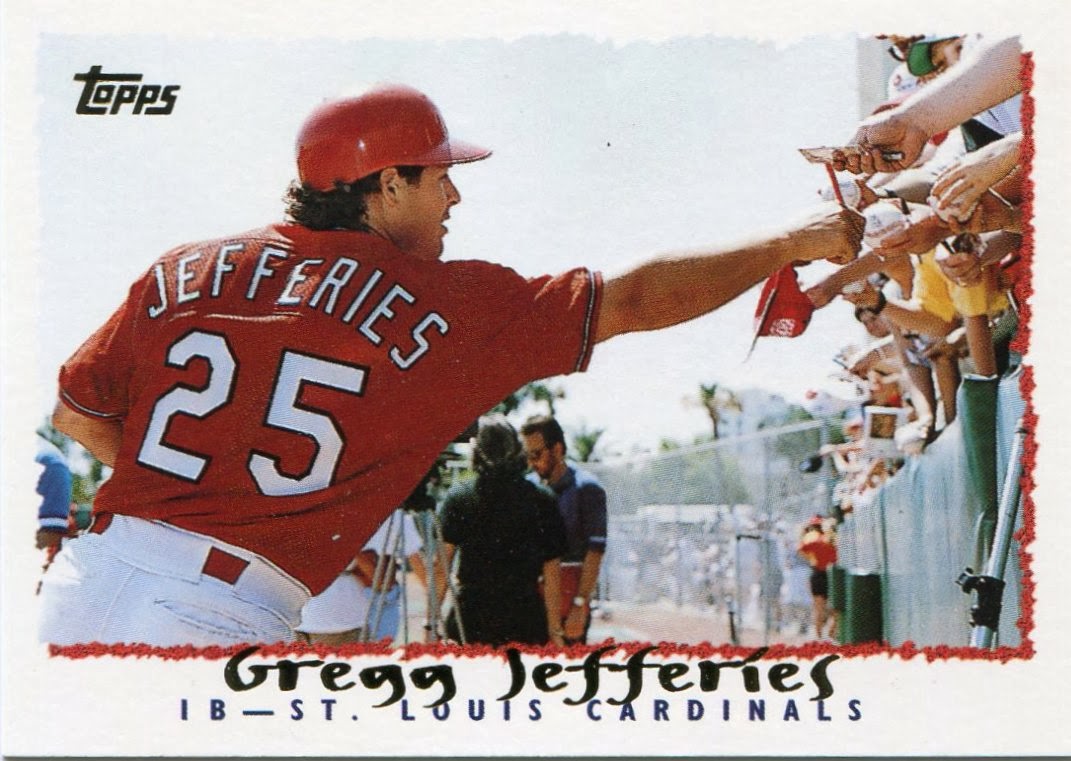 Okay, so maybe not every card was completely Random.

Many of the ones Ethan sent along fit snugly into my many mini-collections.

This serene Gregg Jefferies "autograph" shot is a great reminder that Spring Training is finally here! 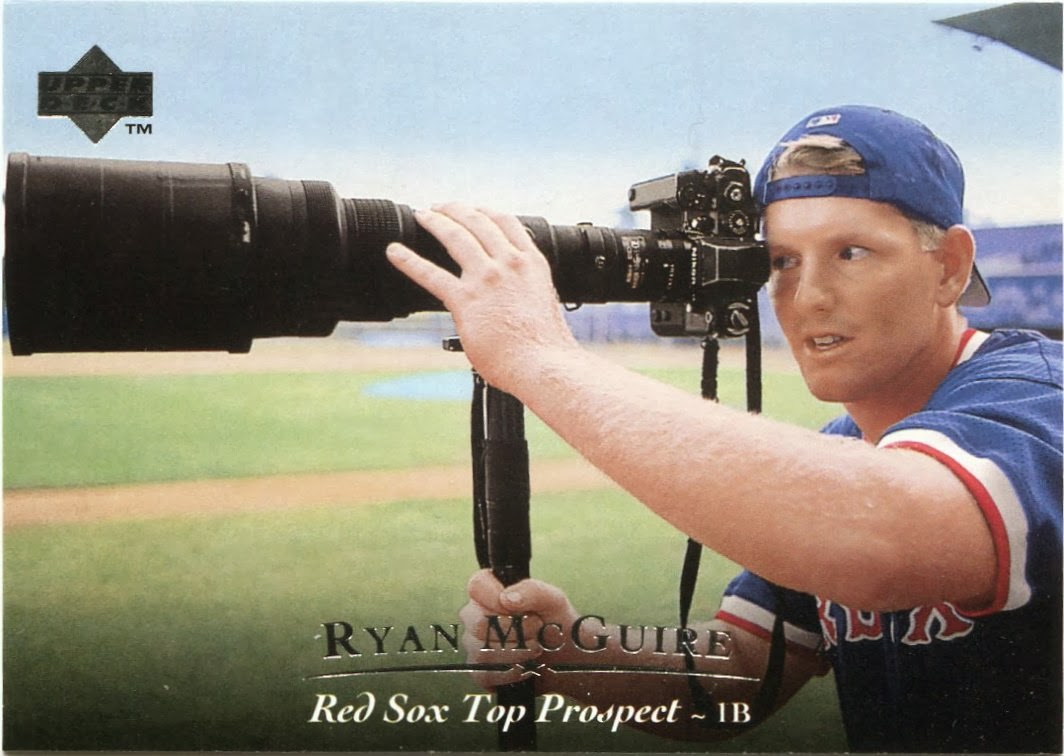 Minor league sets are a treasure trove for mini-collection needs.

Kudos to Upper Deck for getting all of that giant camera into this card's frame. 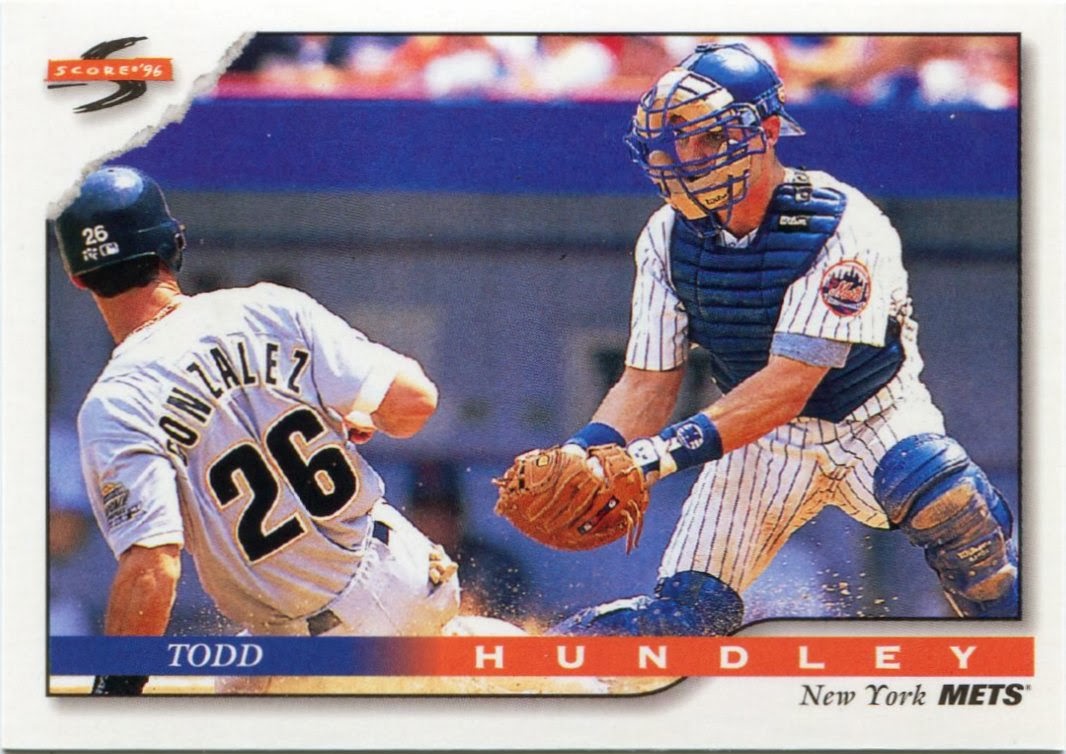 Ethan appears to have a budding stack of extras from the mid '90s.

That's all the better for me, since the mini-collection peak was right around then. Many of my "plays at the plate" come from sets like 1994 Upper Deck or 1996 Score.

I rather enjoy the Luis Gonzalez cameo on this one. 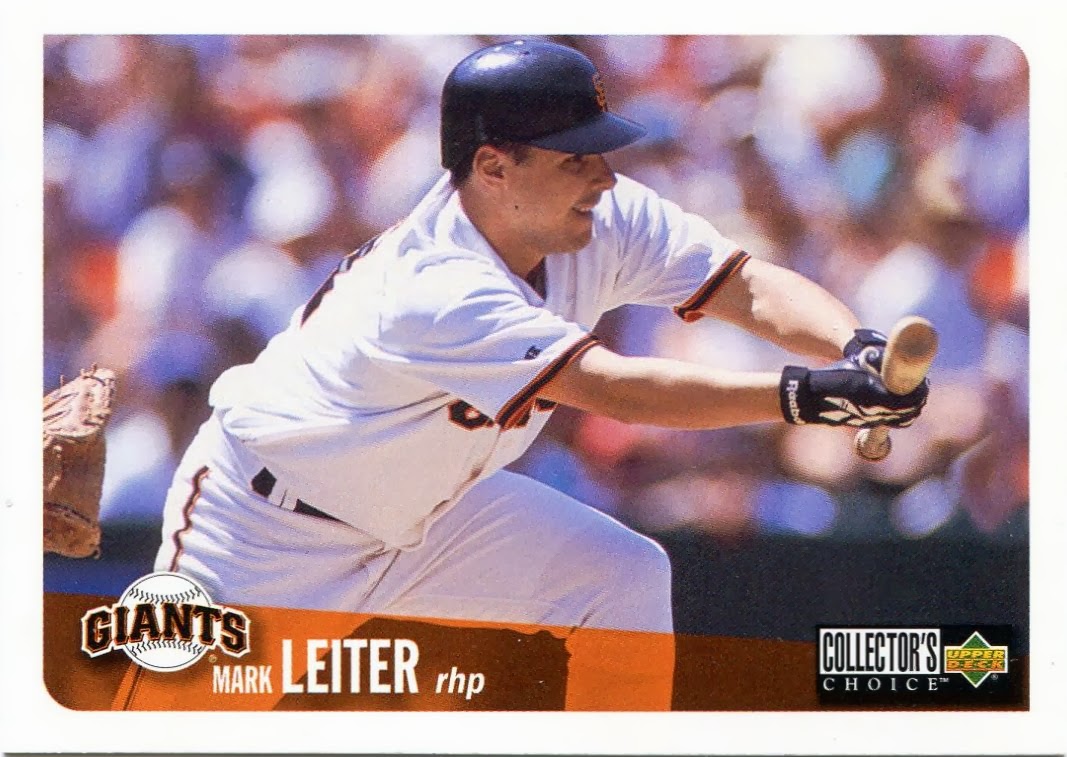 Here's a rare horizontal "pitcher at the plate" specimen.

It comes courtesy of, you guessed it, Collector's Choice. 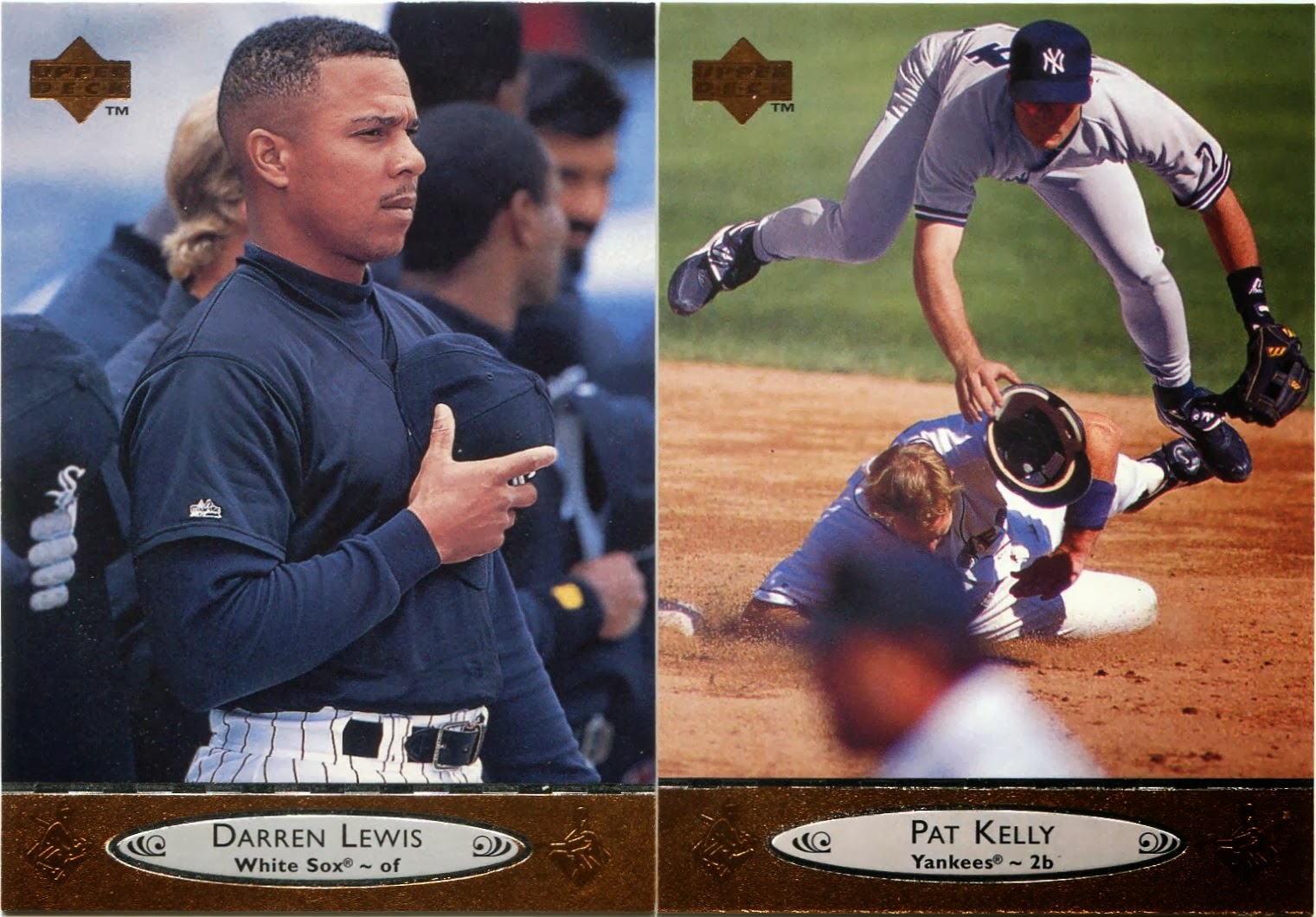 Every so often, a set I'd previously dismissed starts to slowly earn my respect.

Lately, 1996 Upper Deck has been doing just that. I'm still not a huge fan of the Victorian-esque nameplates, but the photography is right up there with the rest of UD's releases from the early-to-mid '90s.

Above are a couple new additions to my "anthemic" and "double dip" themes. 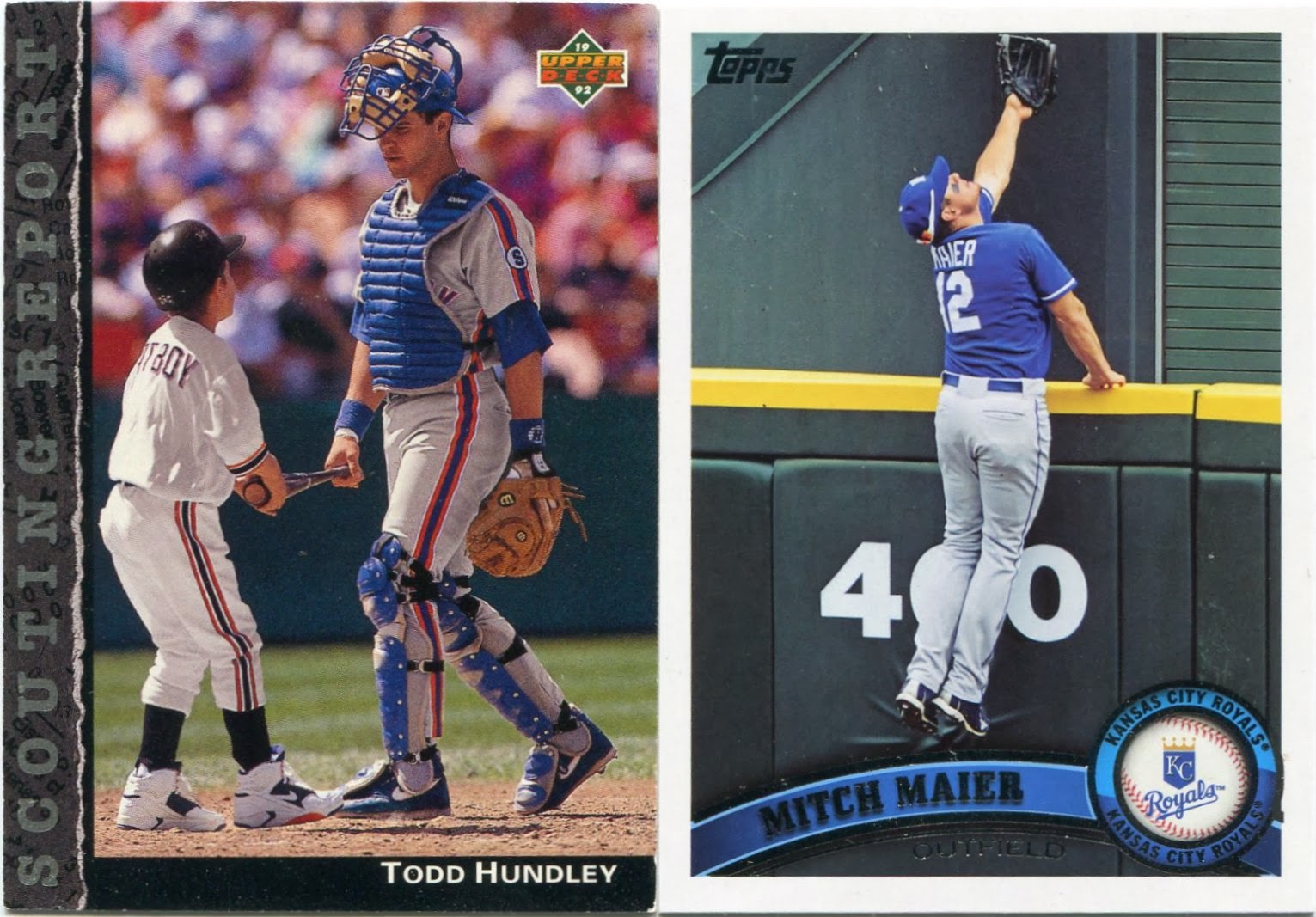 Nowhere in it does it say that a "cards with kids" piece has to feature a tyke from that player's genetic makeup. Batboys are acceptable, like the one Todd Hundley appears to be playing tug-of-war with on that early Upper Deck insert.

I'm pretty sure I had that "at the wall" Mitch Maier at one point. But, being my stupid pre-blogger self, I traded it away.

Thankfully, people like Ethan are around to help me reclaim lost cardboard greatness. 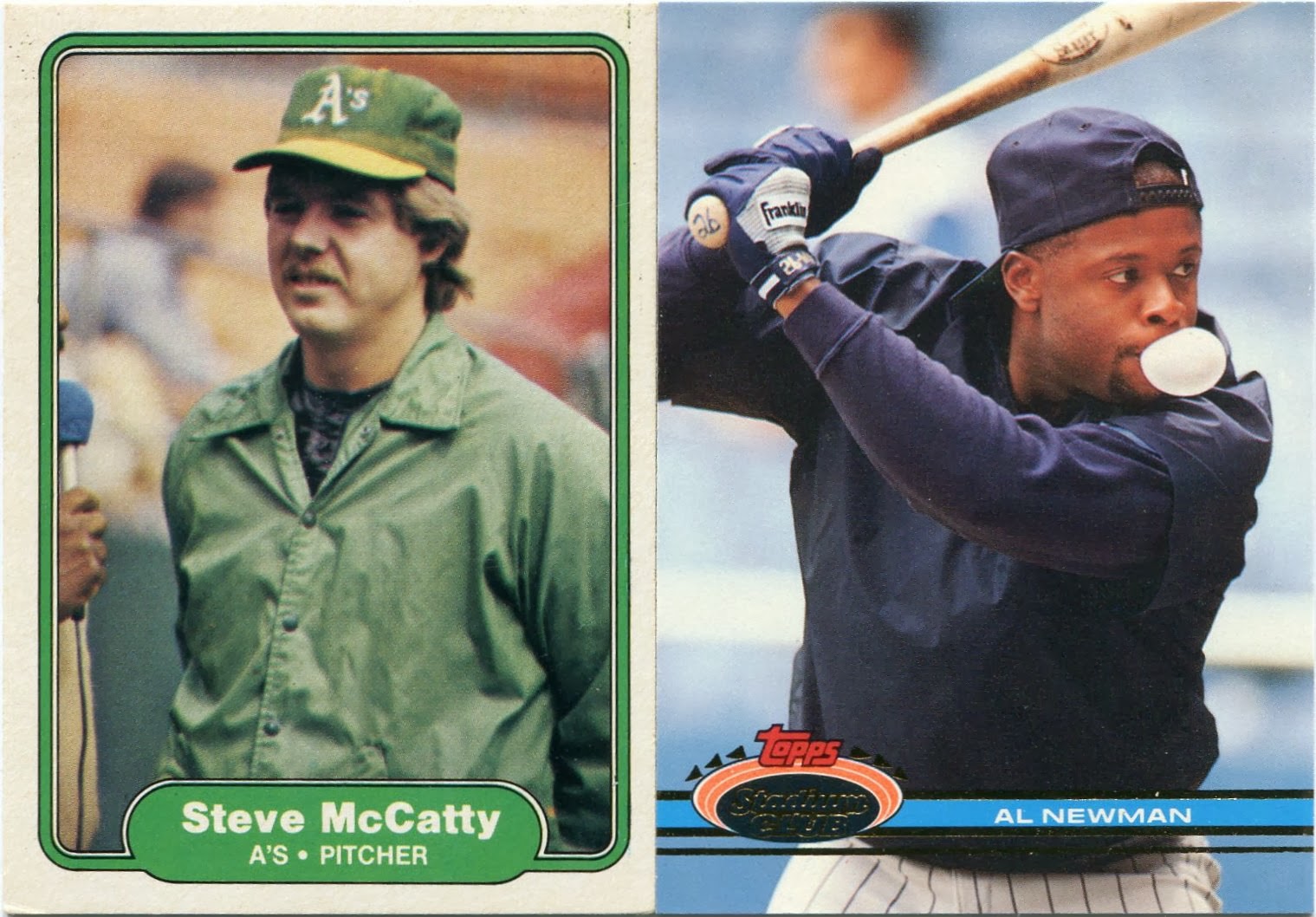 Early Fleer is a great source for "interview" shots.

Stadium Club, of course, is the place to go for great photography in general.

It even has guys blowing bubbles. In keeping to his Random ways, Ethan didn't let me in on a lot of specifics before this package wound up in my mailbox.

He did, however, say he'd found "the awardsiest Award Show card" he'd ever seen for me. Now, what exactly that was, I didn't know.

As it turns out, it was this magnificent piece from the 1992 Conlon Babe Ruth checklist. I count a grand total of seven awards and trophies in that photo. From the "award shows" I'd seen, I think the record before "The Great Bambino" came along was two.

Just like he did during his playing career, Babe Ruth blows everyone out of the water with that card. 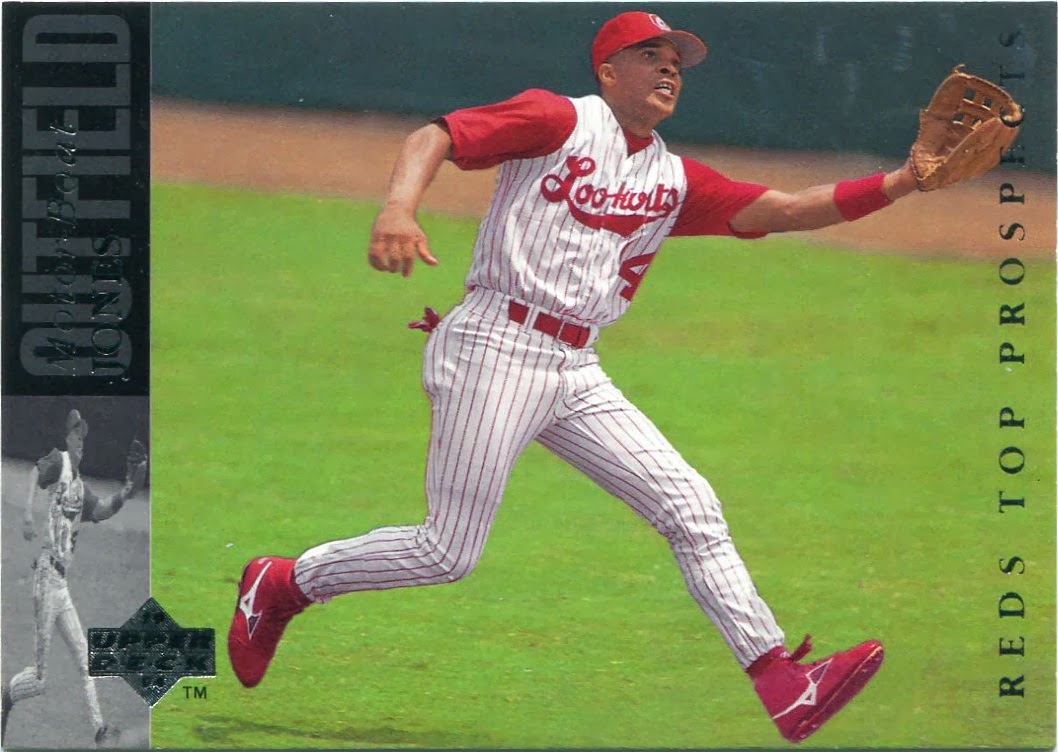 Though mini-collections are fine and dandy, Ethan got into the meat of this trade package pretty quickly.

I'm talking, of course, about the Random.

None of the cards you'll see in the remainder of this post (or the next one) have much rhyme or reason to them. If you read this blog at all, though, you'll know that I get a huge kick out of that.

The Random starts off with one of the craziest names I've ever seen on a baseball card.

It might be hard to tell from the scan, but Upper Deck labeled this young Reds prospect as Motor-Boat Jones. I'm not kidding.

His real name, as I found, is Eugene Jones, and he sadly never made it to the majors. He'd been a prospect in the Reds system since 1987, which is interesting considering this card was produced in 1994.

I guess Upper Deck wanted to immortalize "Motor-Boat" before it was too late. 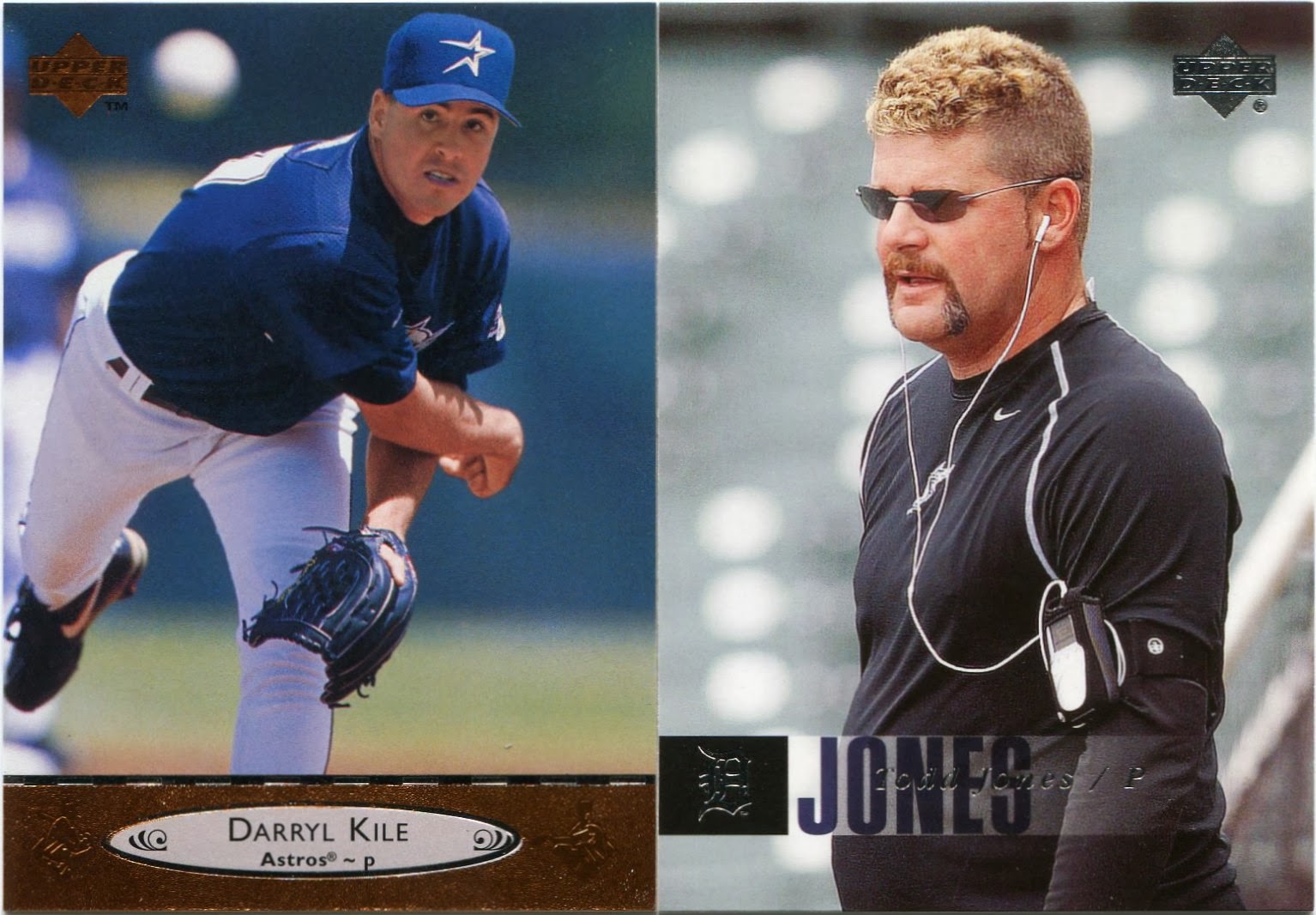 The Kile adds to the amazing string of his cards fellow bloggers have sent me.

I'm pretty sure Todd Jones's 2006 Upper Deck issue is the first appearance of an MP3 player in my collection. I'd like to know what the former reliever was jamming to in that shot.

He looks like a heavy metal type of guy to me. 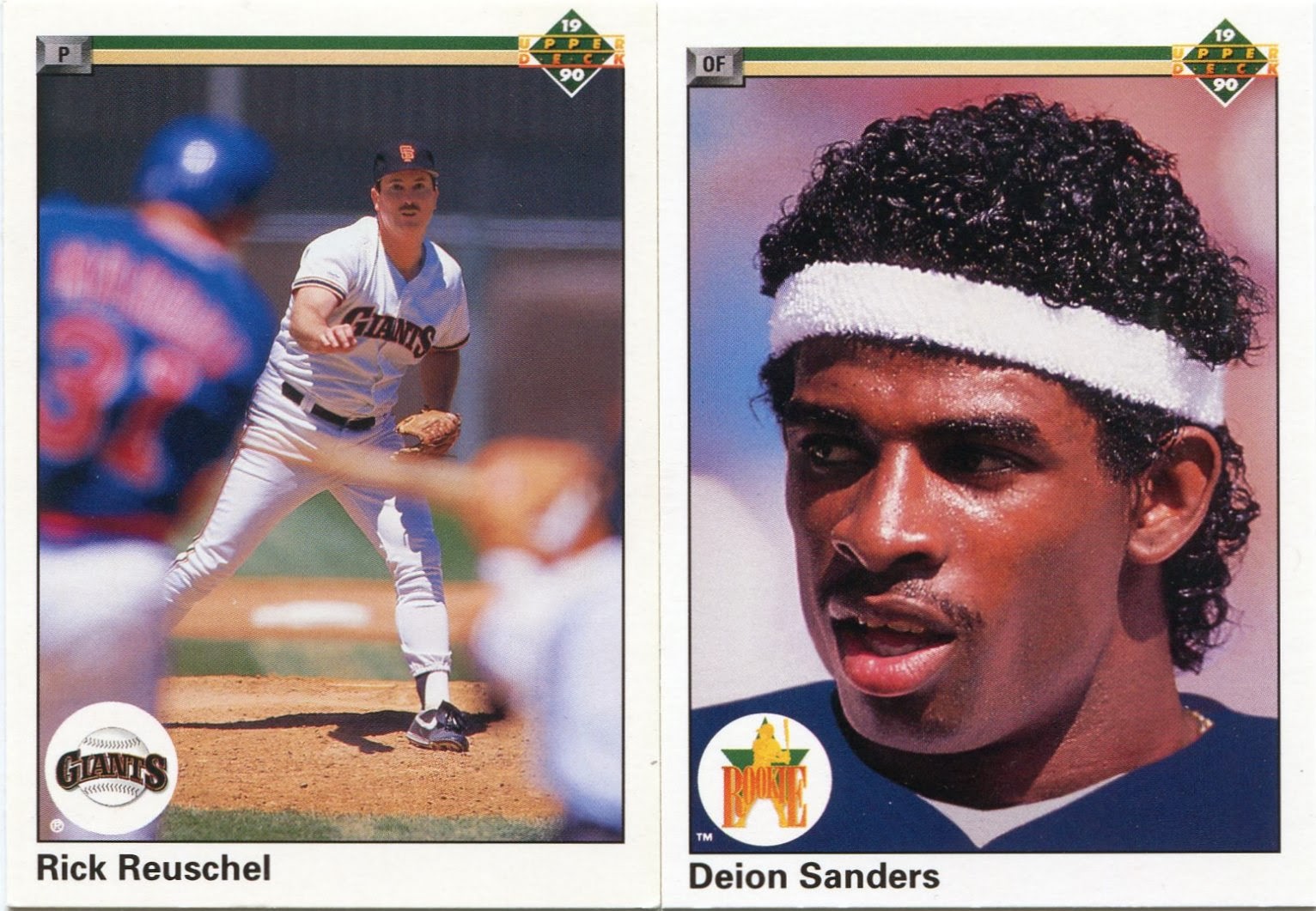 Upper Deck's second release in 1990 may have been a bit of a dud, but you'd never know it from these two.

The Rick Reuschel would've been a nice shot regardless. However, it took me a few seconds to notice that the blurred hitter in that shot was none other than Hall of Fame hurler Greg Maddux. That earns it a few bonus points in my book.

I'd seen that Sanders on a few occasions before, and was mystified that I'd never tracked down a copy. I'm about 99 percent sure that Upper Deck used a shot of "Neon Deion" from the gridiron. 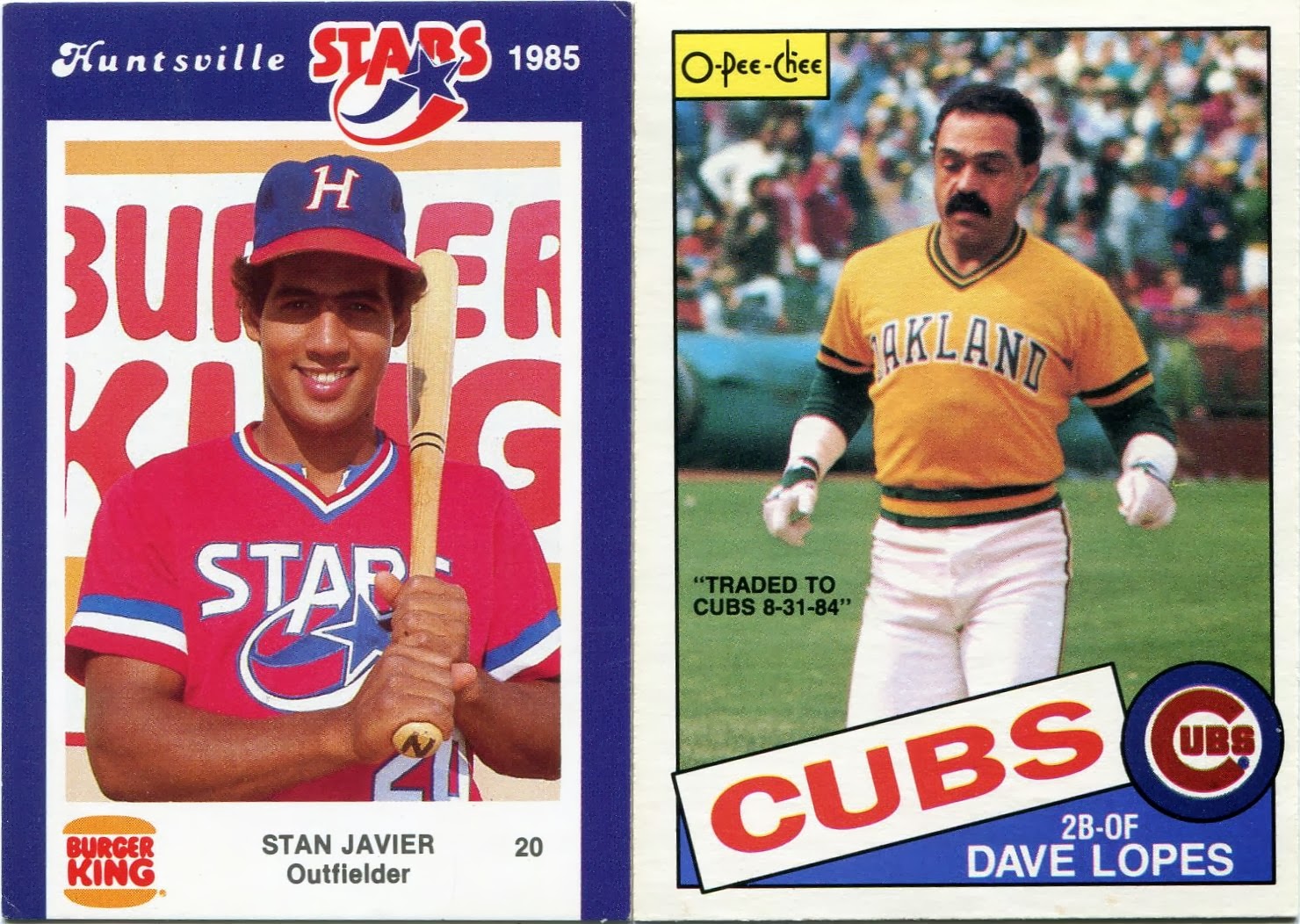 Ethan's path of Random steered off into the world of oddballs as well.

Note the perfectly-centered Burger King logo on that minor league issue of Stan Javier. It makes sense, considering that the 1985 Huntsville Stars checklist was produced by, well...Burger King.

I'm ecstatic to have an '85 OPC Dave Lopes in my collection, but it's going to do wonders to my cardboard OCD. That's because I somehow haven't yet found a copy of Lopes's standard '85 Topps issue.

If anyone has an extra copy available, my cardboard therapist would greatly appreciate it. 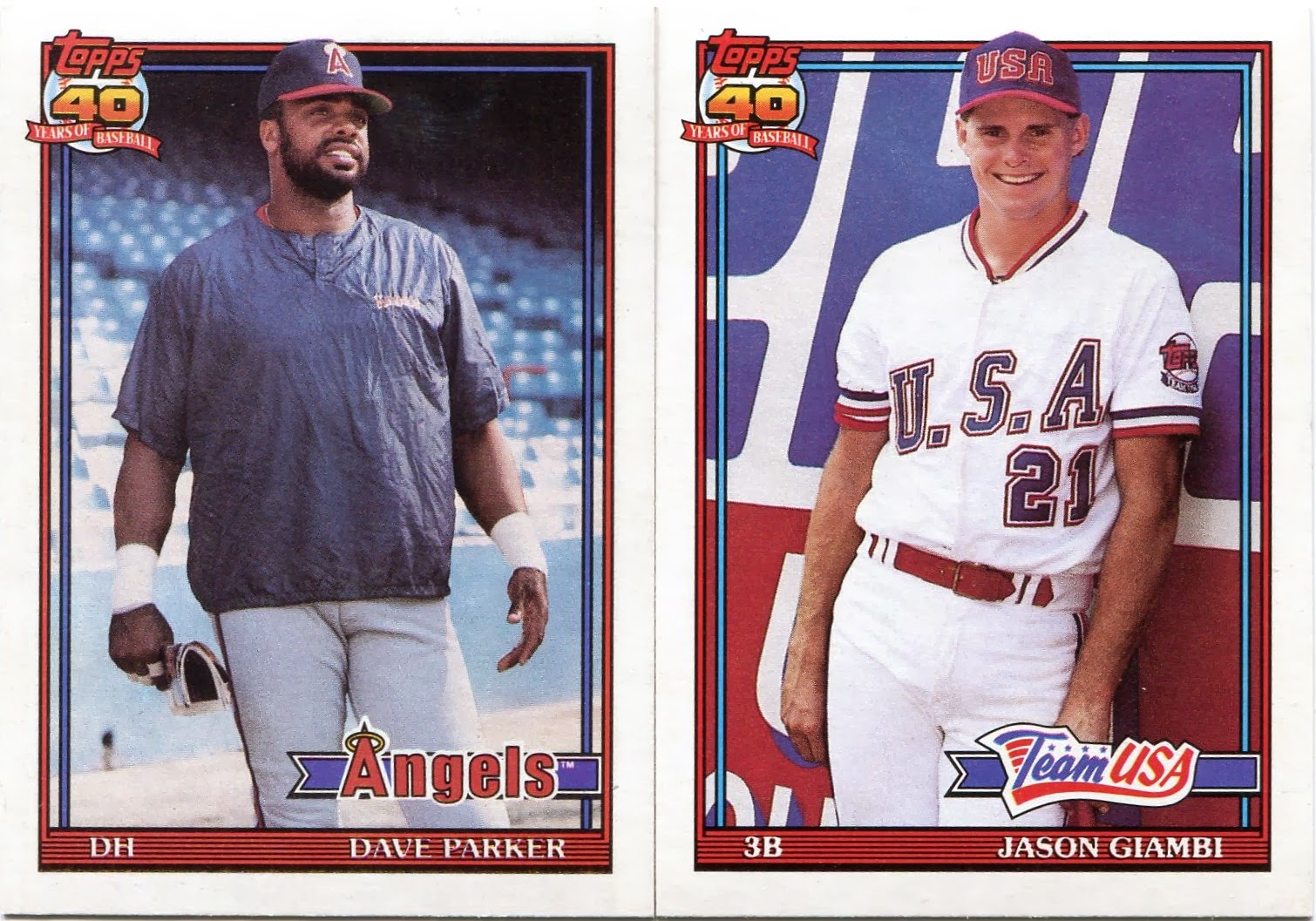 Ethan stumped me with these.

On the surface, they looked like standard 1991 Topps Traded singles. However, the backs weren't glossy like most of Topps's Traded sets were in the late '80s and early '90s. They had the standard, cardboard-like feel to them.

Unbeknownst to me, though, Topps actually issued two different versions of their Traded sets in 1991. The ones sold in factory sets had the glossier finish to them. Ones from wax packs, however, had the regular cardboard backs. These two are from those wax packs.

Though the Giambi rookie was entirely new to me, I'd had a glossy-backed copy of the Parker in my collection for a while now. I had a bit of a dilemma as to whether both the glossy and regular cardboard versions should reside in my Angels binder.

Eventually, I decided that even the slightest variation is still a variation. Both Parkers get to be in my Angels binder.

My cardboard OCD won out again. 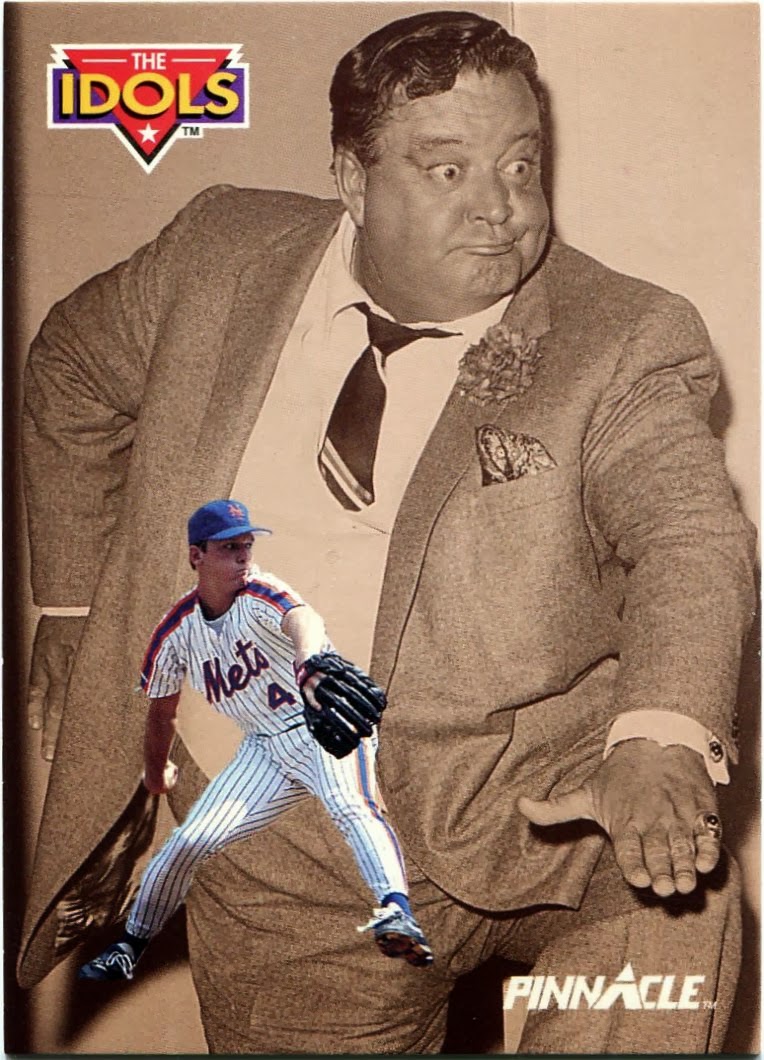 Package "Uno" closed out with the oddest of combinations.

Much of Pinnacle's "Idols" subset in 1992 paired baseballers with fellow baseballers, but a few decided to venture outside the lines.

This spectacular single features David Cone and comedy legend Jackie Gleason in the same breath. According to the back, Gleason was a hero of Cone's as a kid.

It's certainly one of the more unlikely pairings I've ever seen on a baseball card.

This, my friends, is true Random in every sense of the word. Though package "Uno" knocked it out of the park on its own, Ethan didn't stop there.

The Random was just beginning.
Posted by Nick at 1:41 PM

I prefer green salsa on chicken tacos, red salsa on beef. But I like to switch it up every once in a while for variety.

Loved the notes from Ethan. And I have to agree with about the salsa as well.