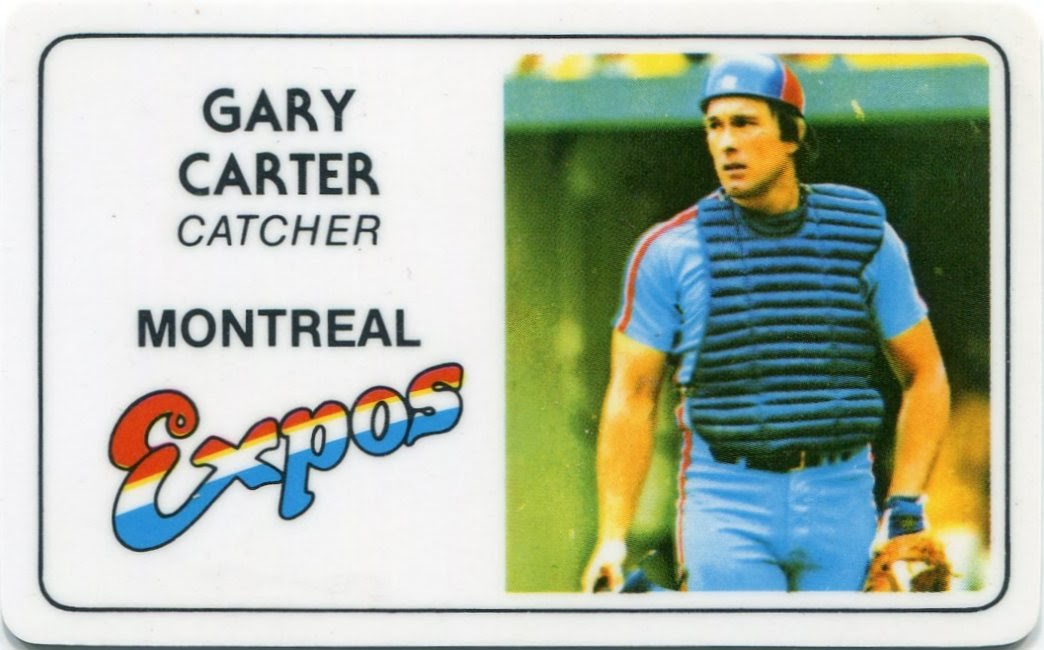 For those who are new to this blog, I should note that the local outdoor flea market is like my salvation during the summer months.

There's one vendor in particular who always has a fantastic array of cardboard on display every single week. Better yet, he cuts me amazing deals on the things I buy from him. I could link to a ton of different posts I've written about my flea market hauls, but here's one for now.

That said, the wind chill around here was about -11 when I left for school today. So why bring up all this flea market stuff now?

Because that awesome vendor was there on Sunday. He sets up at this show during the winter months. In many ways, it was like a flea market inside a card show. The best of both worlds.

Unfortunately, he didn't have his famous baseball dime boxes on display this time. (The only dime boxes present were basketball ones.)

He did, however, have a few different boxes full of quarter, fifty-cent, and dollar cards ripe for the picking. I landed the neat Gary Carter oddball you see above from one of his dollar bins.

After a little research, I found that it hails from the 1981 Perma Graphics checklist, which I'd never heard of before Sunday. It almost has the feel of a credit card. Or one of those old phone cards. 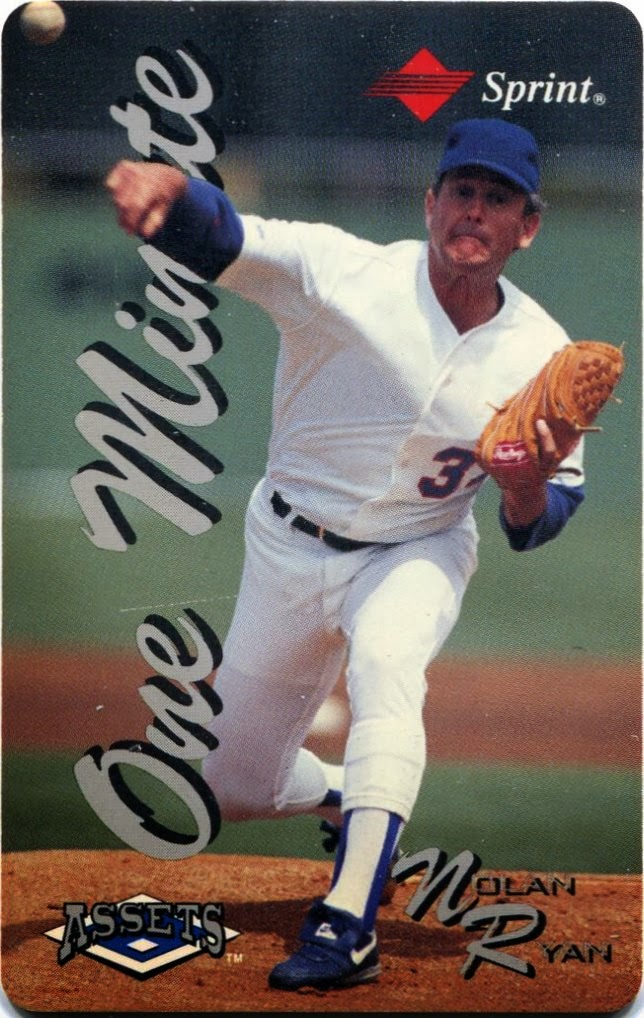 I have no idea how or why a card like this one ended up in a card show quarter box here in 2014, but I'm not complaining. This is a terrific oddball of "The Ryan Express", and one I can't imagine is too easy to find these days.

Apparently, the people at Sprint felt Mr. Ryan was only worth a single minute of talk time. 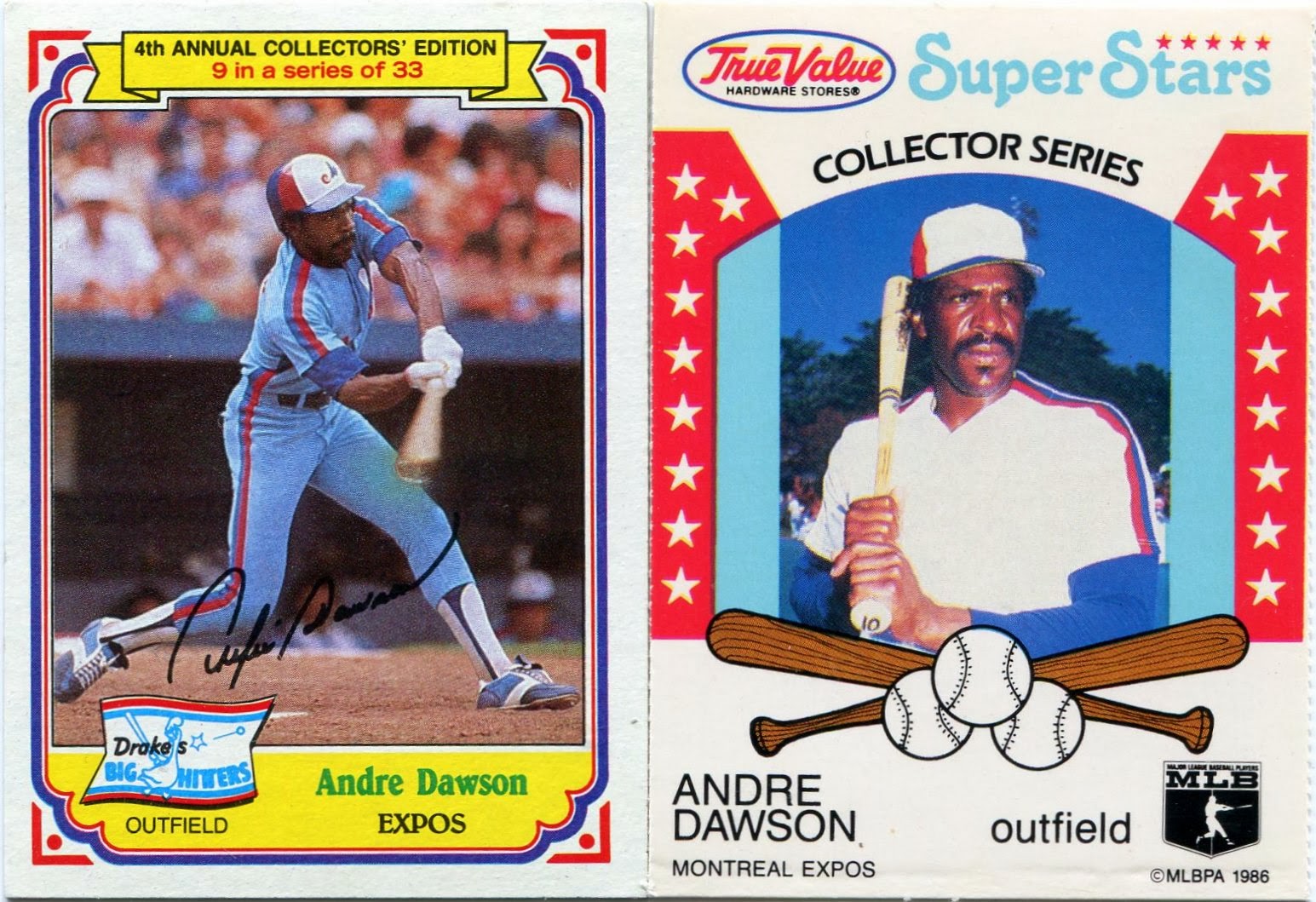 Oddballs were in full force on Sunday.

I never collected "Hawk" much in the past, but his recent election to the Hall of Fame has really pushed me to pick up more of his cards lately. 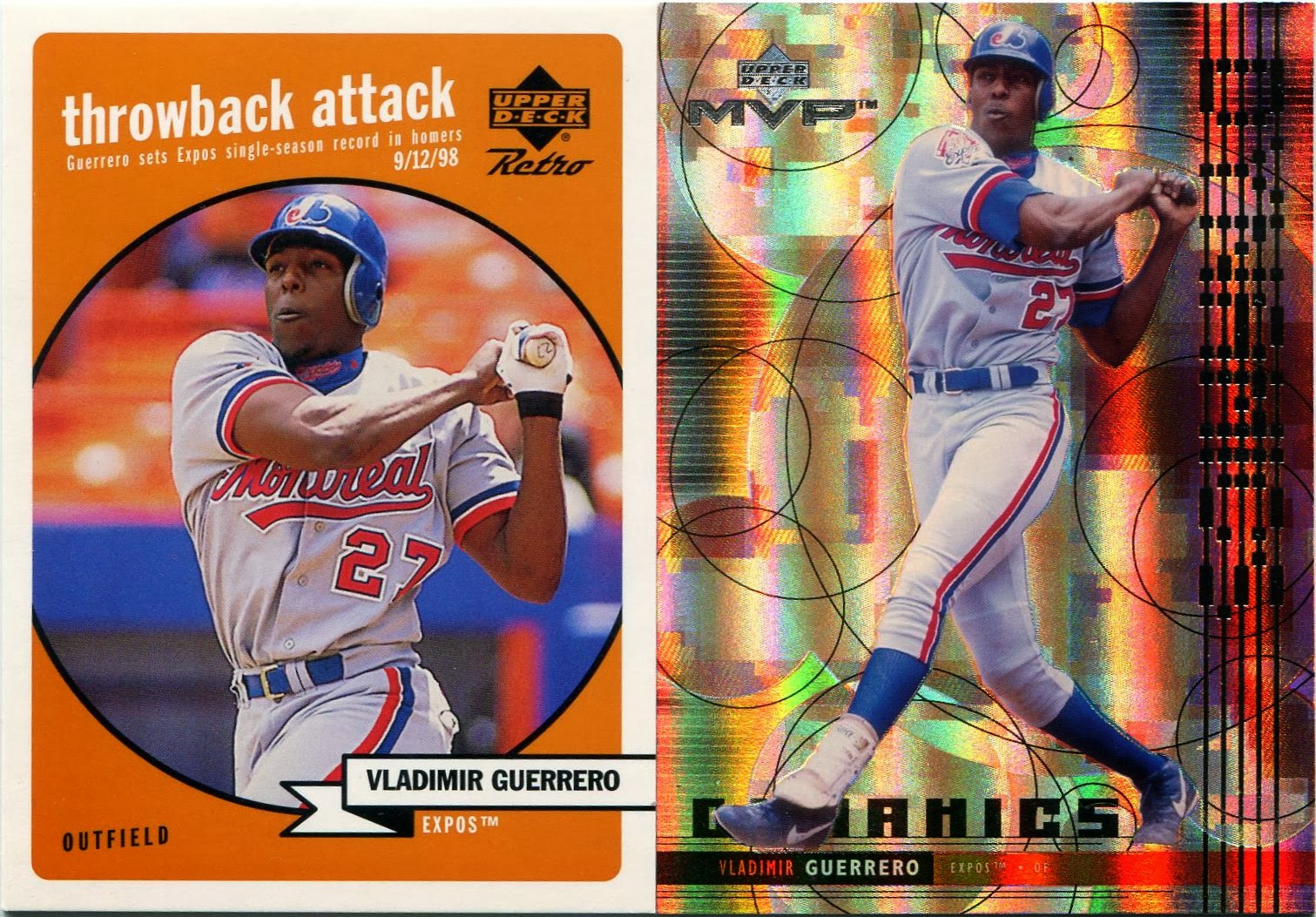 I honestly don't think I've walked away a show without picking up at least a handful of Vlads.

These two neat '90s inserts also came from the quarter bins. The one on the right is especially psychedelic.

It's just not a card show without Vlad. 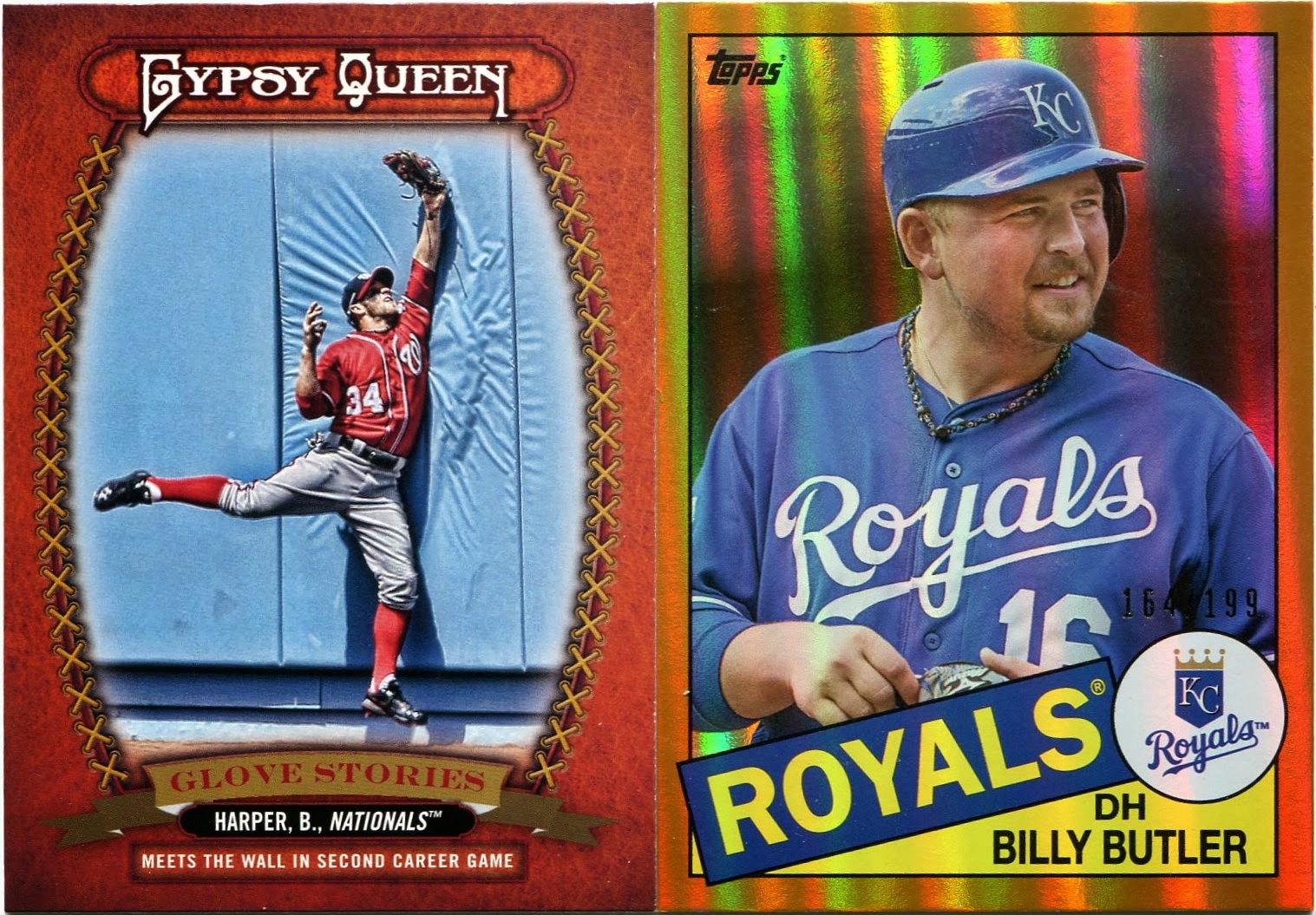 I've said this before, but what I like most about my flea market guy's selection is the fact that he pretty much has a little of everything.

While oddballs and '90s inserts are present, you'll find quite a bit from the more recent hobby developments as well.

If that Harper is any indication, Gypsy Queen certainly knows its way around an insert. Now, if only they could create a decent base design...

Though I'm not a huge Archives fan, I will say that the gold parallels are pretty nice. I'd never seen one in-person before Sunday.

At just a quarter, I'm all over those things. 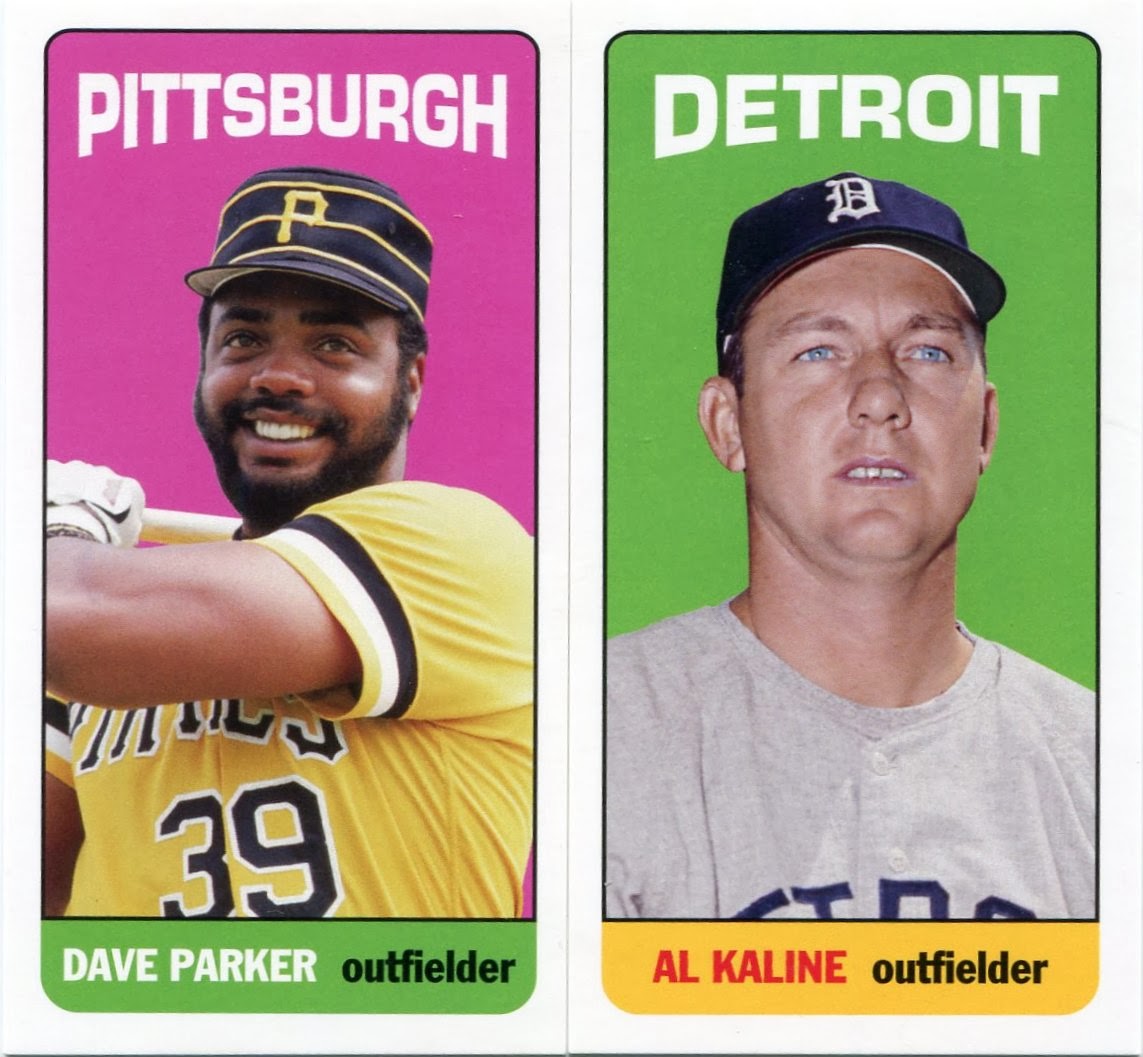 Archives may be moving into GQ territory, in that the inserts from the brand are vastly better than the base cards.

Last year featured the introduction of the terrific "Tall Boys" series. Again thanks to this quarter bin, these are the first two I'll be adding to my binders.

I can't explain it, but there's something about the odd combination of magenta and Pirate gold that I really like. 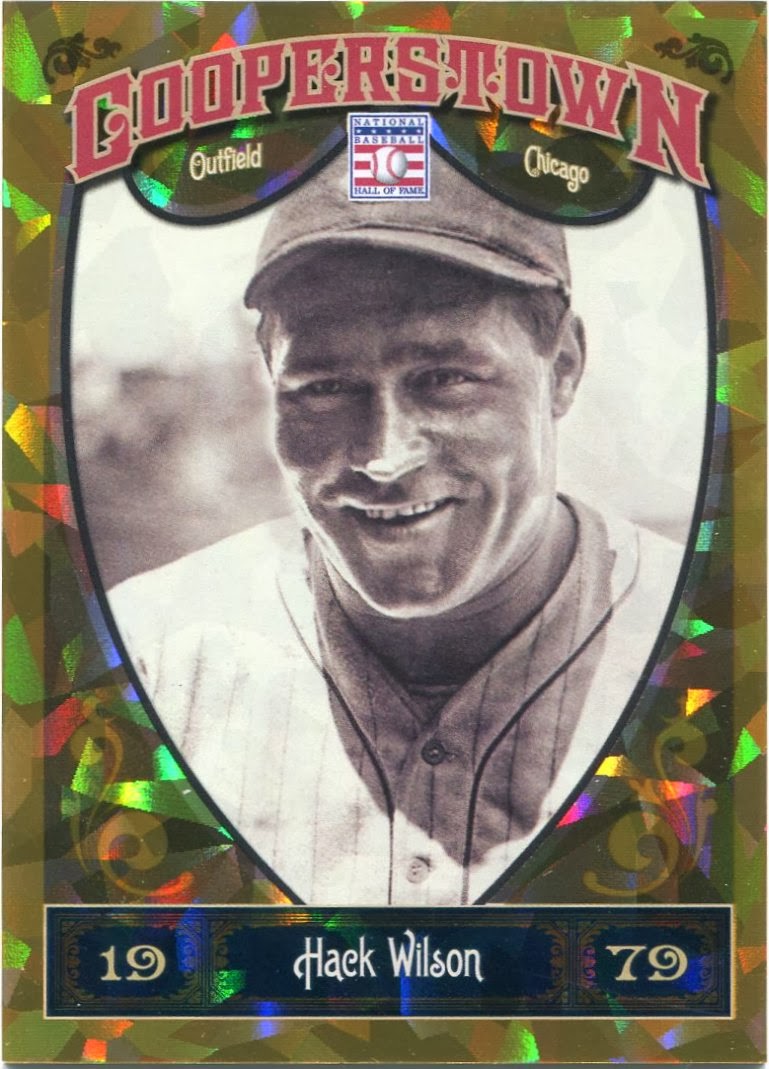 We'll close out the flea market/card show combo finds with this stunner from the dollar box.

Limited to just 299 copies, this Hack Wilson is a magnificent "Gold Crystal Shard" parallel from last year's Panini Cooperstown release. As you might guess, it looks about a hundred times better in person.

Between all my quarter, fifty-cent, and dollar buys, my purchases should've come to about twenty bucks all together. Continuing his usual generous ways, my flea market guy charged me just half that for the lot.

I can't wait until summer comes. 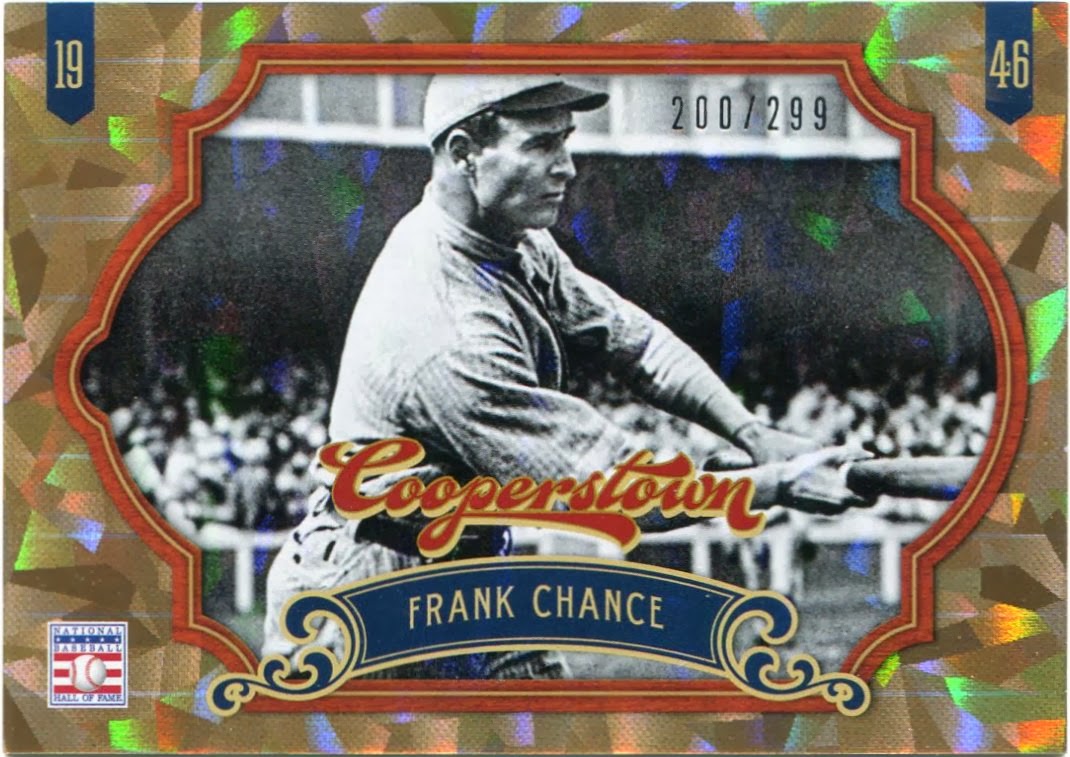 In a strange coincidence, the Wilson wasn't the only Cooperstown "Gold Crystal Shard" parallel I picked up on Sunday.

Though they weren't priced, the guy who had that neat non-sports dime box I talked about yesterday had another bin full of newer inserts and parallels available. The lack of pricing scared me, but I dug in anyways and pulled out a few pieces that I really wanted.

Thankfully, I found that he was more than fair on the cards in that bin. I've experienced quite a few horror stories when it comes to unpriced cardboard, but this wasn't one of them.

Like the Wilson, this beautiful Cooperstown parallel of "The Peerless Leader" set me back a buck.

That's definitely a reasonable price if you ask me. 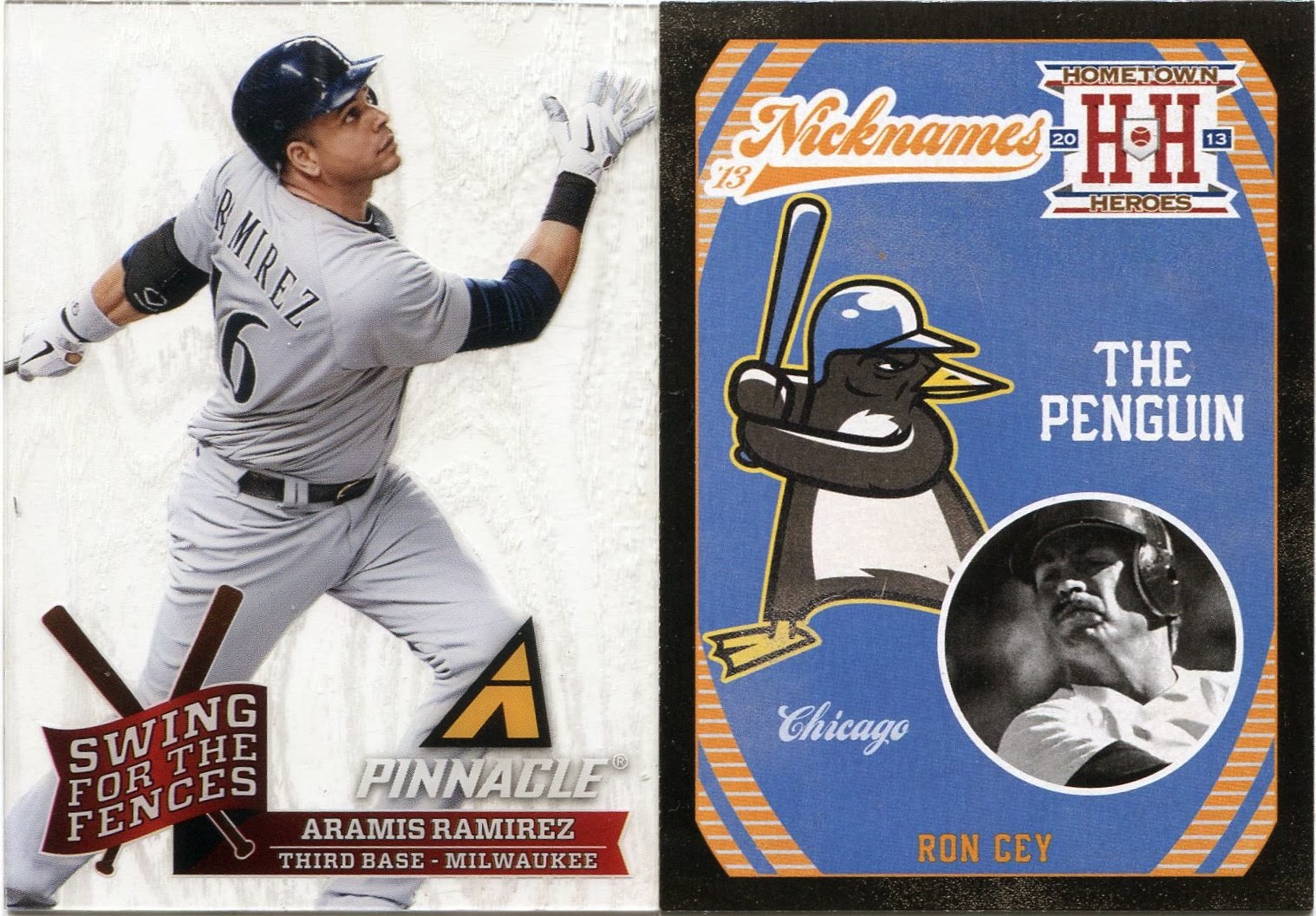 Although we're pretty far into 2014 already, Panini still isn't done surprising me with their 2013 efforts.

I wasn't huge on last year's Pinnacle revival, but that "Swinging for the Fences" insert is something else. While it might be tough to tell from the scan, that Ramirez is actually transparent. It's certainly in line with the "outside-the-box" way of thinking Pinnacle had during its heyday.

Though I'd known about the "Nicknames" series in Hometown Heroes, I didn't know "The Penguin" was a part of it. I found it odd that Panini labeled Cey as a Cub on that one, as he earned and became famous for the moniker as a Dodger.

Both of these were steals at just a quarter each. 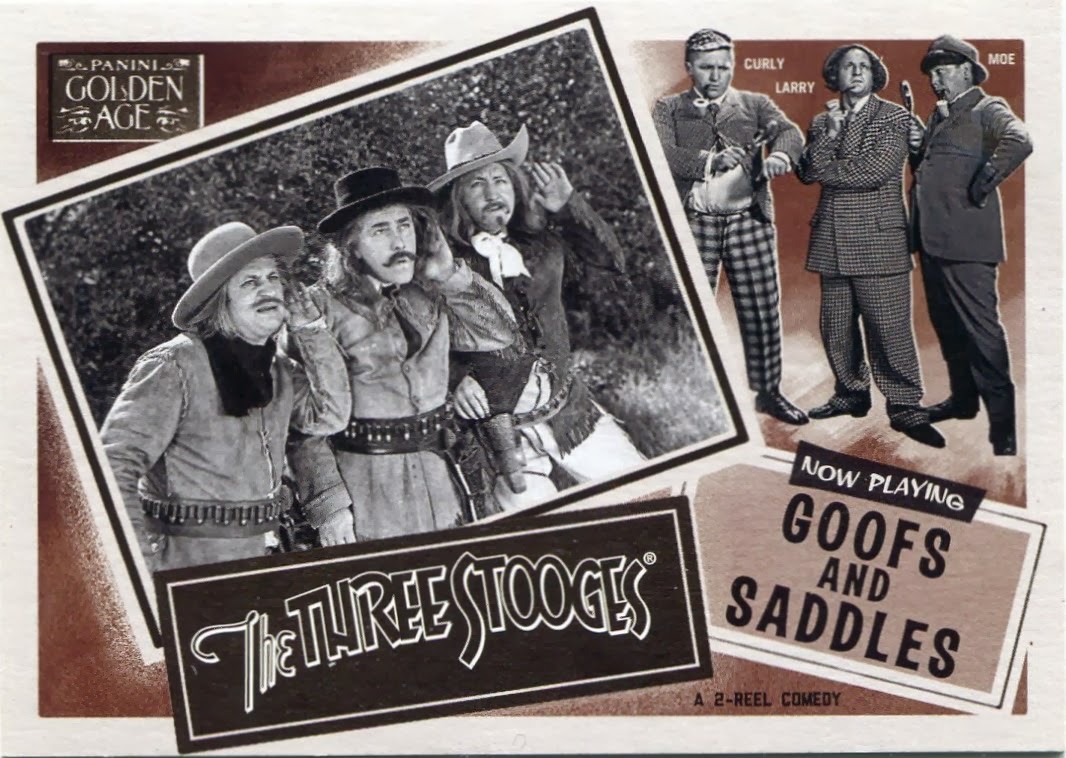 Like a few of Sunday's dime box finds, I had a couple of these Three Stooges inserts lined up in that lost Just Commons order I placed a while ago.

At one per Golden Age box, I feared I'd never find another one at a reasonable price. The vendor let this one go for just a dollar.

I know the "Goofs and Saddles" short well. It's definitely a good one.

Then again, all Curlys are good ones. 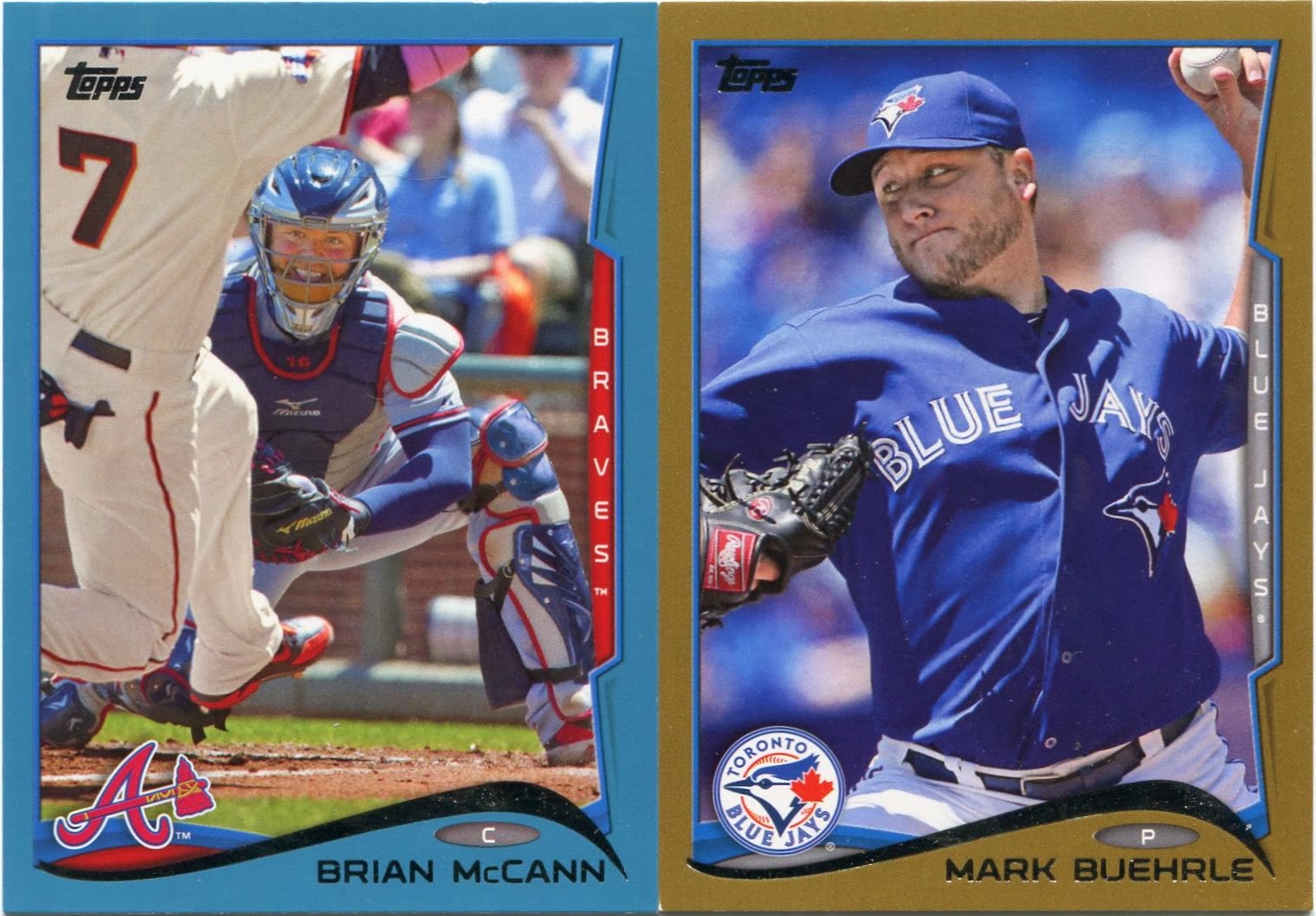 Though I'm set on the base cards, I'll still be picking up Flagship parallels throughout the year. The McCann set me back a quarter, while the numbered Buehrle was a fifty-center.

I think the different colors look nice on this year's design. 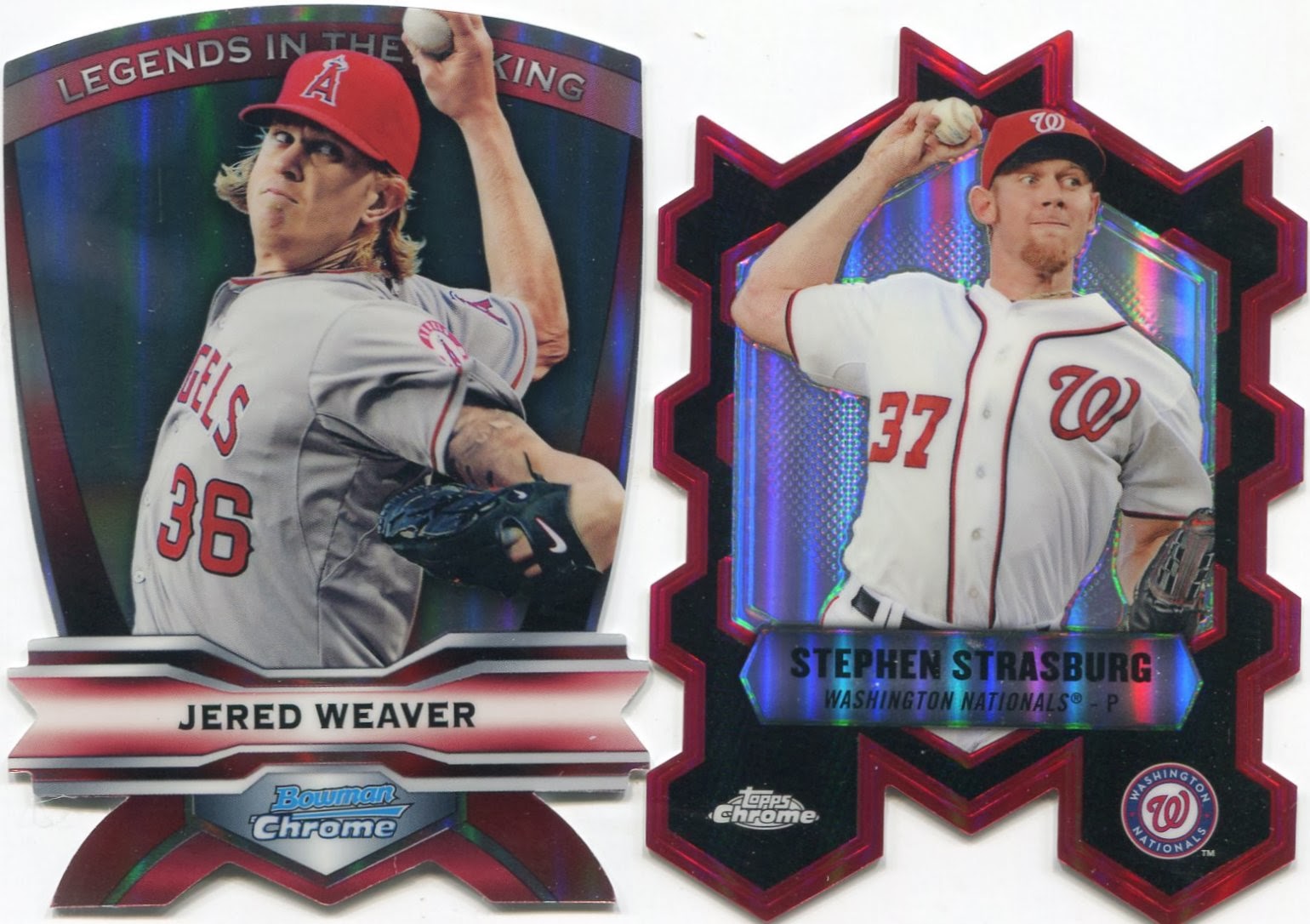 Card companies are doing some odd things these days.

I plucked these for a quarter each during one of my last stops on Sunday. I collect both Weaver and Strasburg, but the sheer craziness alone would've been worth the quarters to me.

How the heck do card companies land on these particular shapes?

I'm thinking they just gave a sheet of paper to a first grader and said, "Here, cut this." 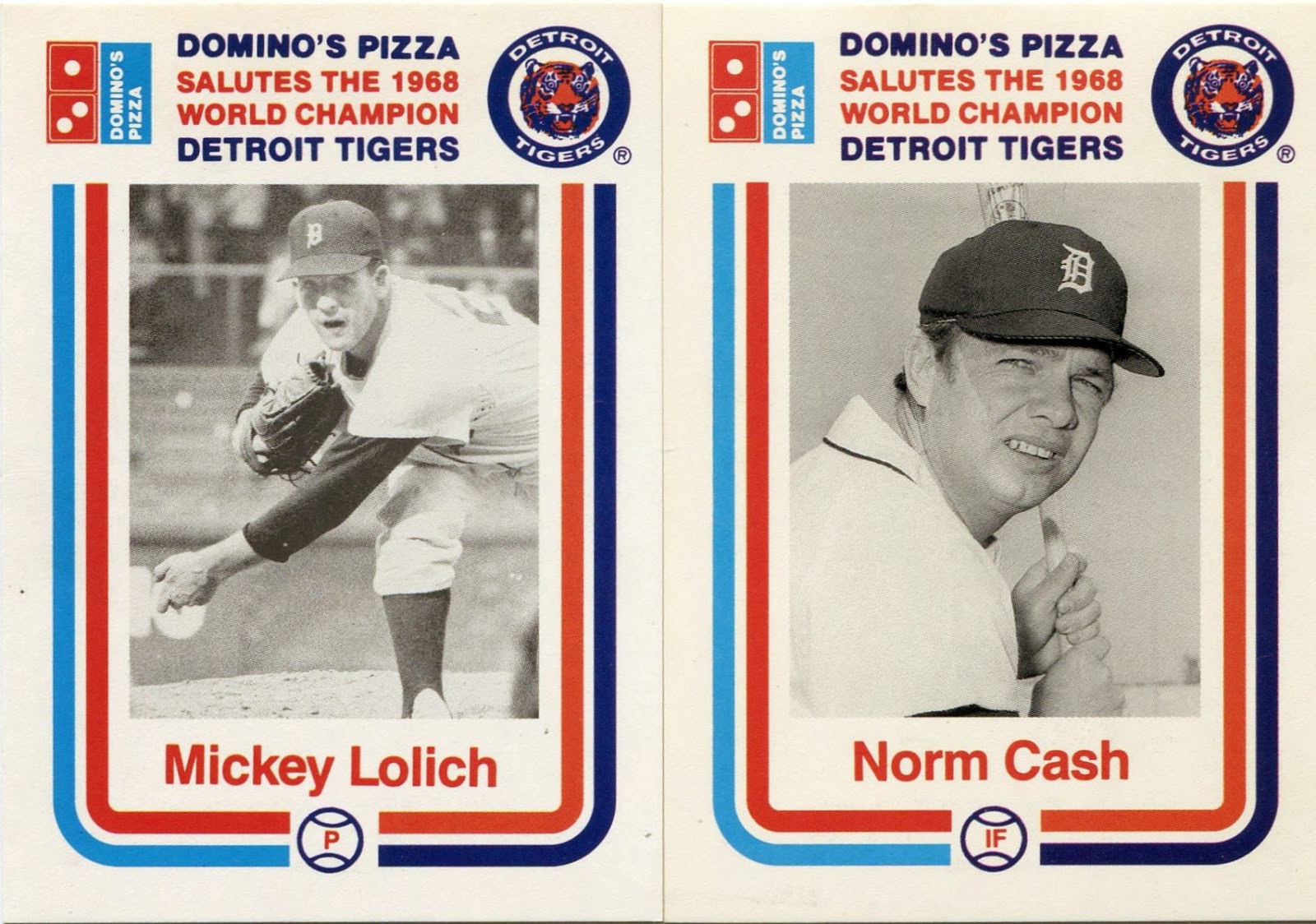 You'll be hearing a lot more about this particular vendor in my next (and final) card show post, but one guy had a few different discount boxes on display.

One of them was filled entirely of Detroit Tiger cards, which I found odd. I'd never before seen a bargain box revolve around a single team like that.

Though I didn't dig through the entire thing, I did manage to find a few stellar adds to my Tigers binder. These terrific oddballs set me back just a quarter a piece.

I sure never knew Domino's made baseball cards before Sunday.

I bet these taste better than their pizza. 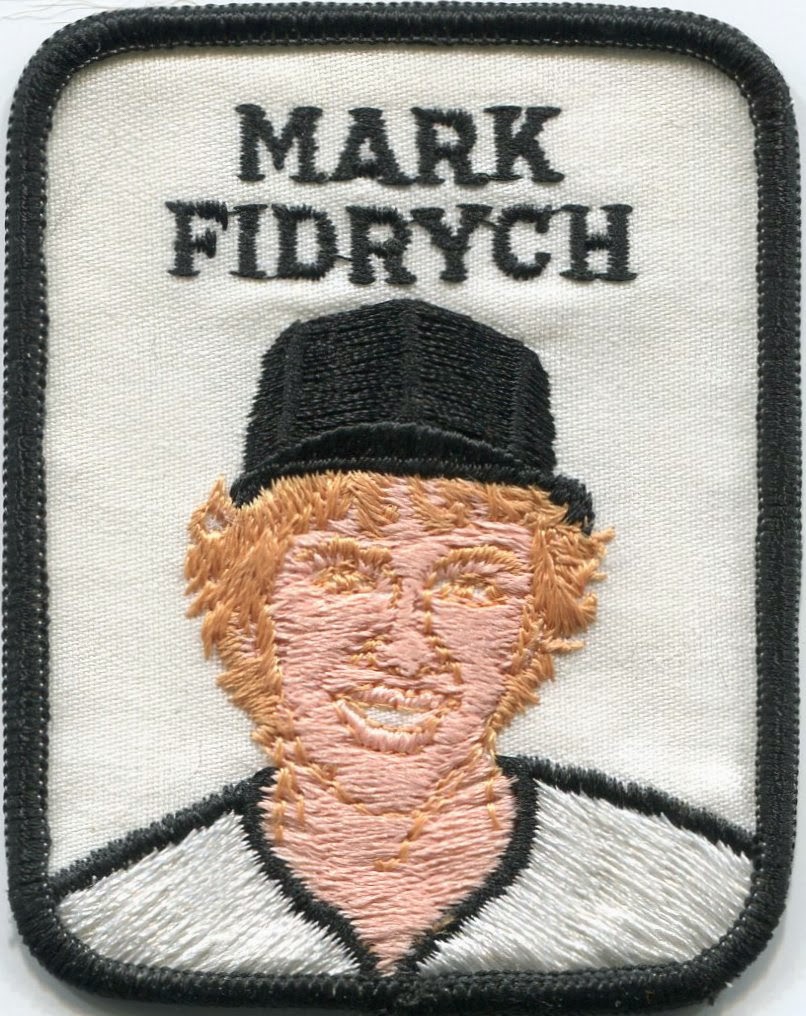 This was the only non-cardboard item I bought at this show.

Jeff was with me when I found this awesome patch of "The Bird" for a buck. As I told him at the time, I'll buy absolutely anything that relates to Mark Fidrych.

I honestly don't care what it is. 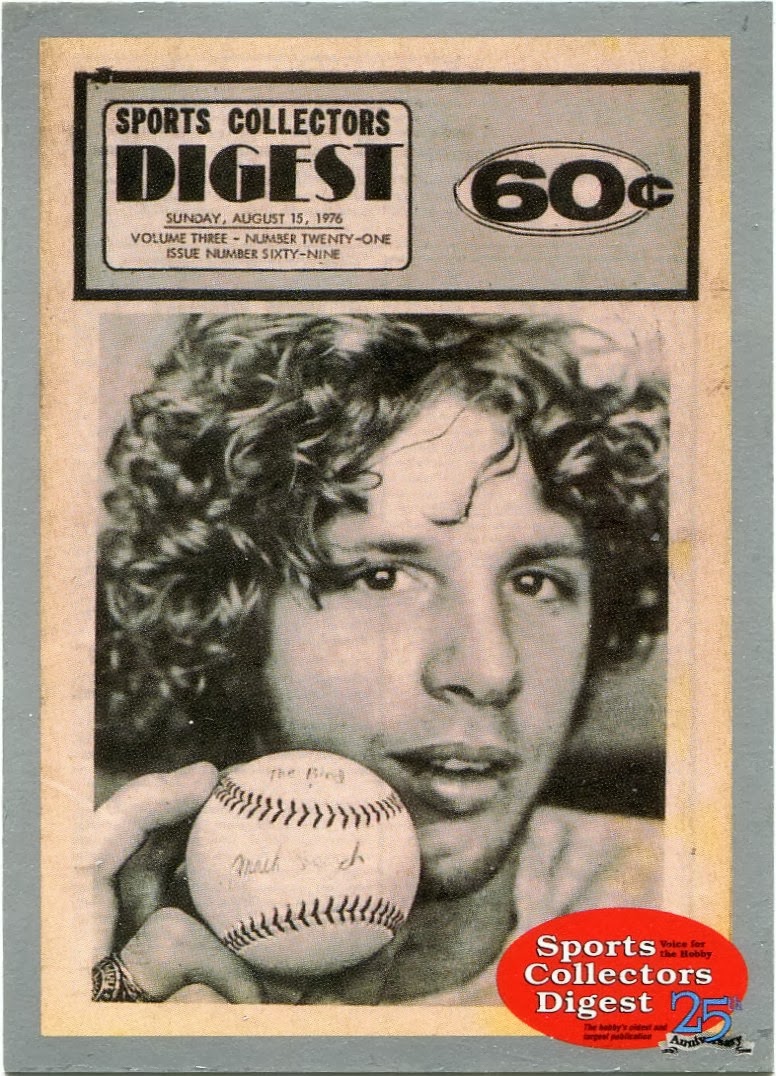 It'd be a tough call to pick an absolute favorite from Sunday's finds, but this would definitely be a strong candidate.

What you see above is another example of how great magazine covers look on baseball cards. Much less one that features Mark Fidrych. Apparently, "The Bird" was featured on the cover of an issue of Sports Collectors Digest back in the day.

At just a quarter, this was one of the better steals of my card collecting life. After a good bit of researching, I found that it hails from a Fleer oddball release that revolves around these Sports Collectors Digest covers.

It looks like a pretty cool set overall, but I can't imagine any of the others would come close to matching "The Bird".

Yes, this blog may be called "Dime Boxes". But even I'll admit that they're not the be-all, end-all of card shows.

If Sunday's finds are any clue, a little quarter, fifty-cent, and dollar box digging can go a long ways.
Posted by Nick at 6:53 PM

Love the oddballs. That Fidrych penn player patch is great.

You are correct on the magazines into cards observation - it just works.

Wow, Perma Graphics... I haven't thought about those since... probably the early 1980's. I never had any, but that's as close as we got to a "High End" back in the day.

One minute of talk time? What they heck are you supposed to do with that? It actually made sense at the time, because one would NEVER use the minutes on a calling card, then it loses it's intrinsic value. Or something.

You know I love that last Bird...! Sweet find.

Wish we had some cool flea markets up here in Cheyenne. Will have to see what they have down in Denver possibly? Great finds.