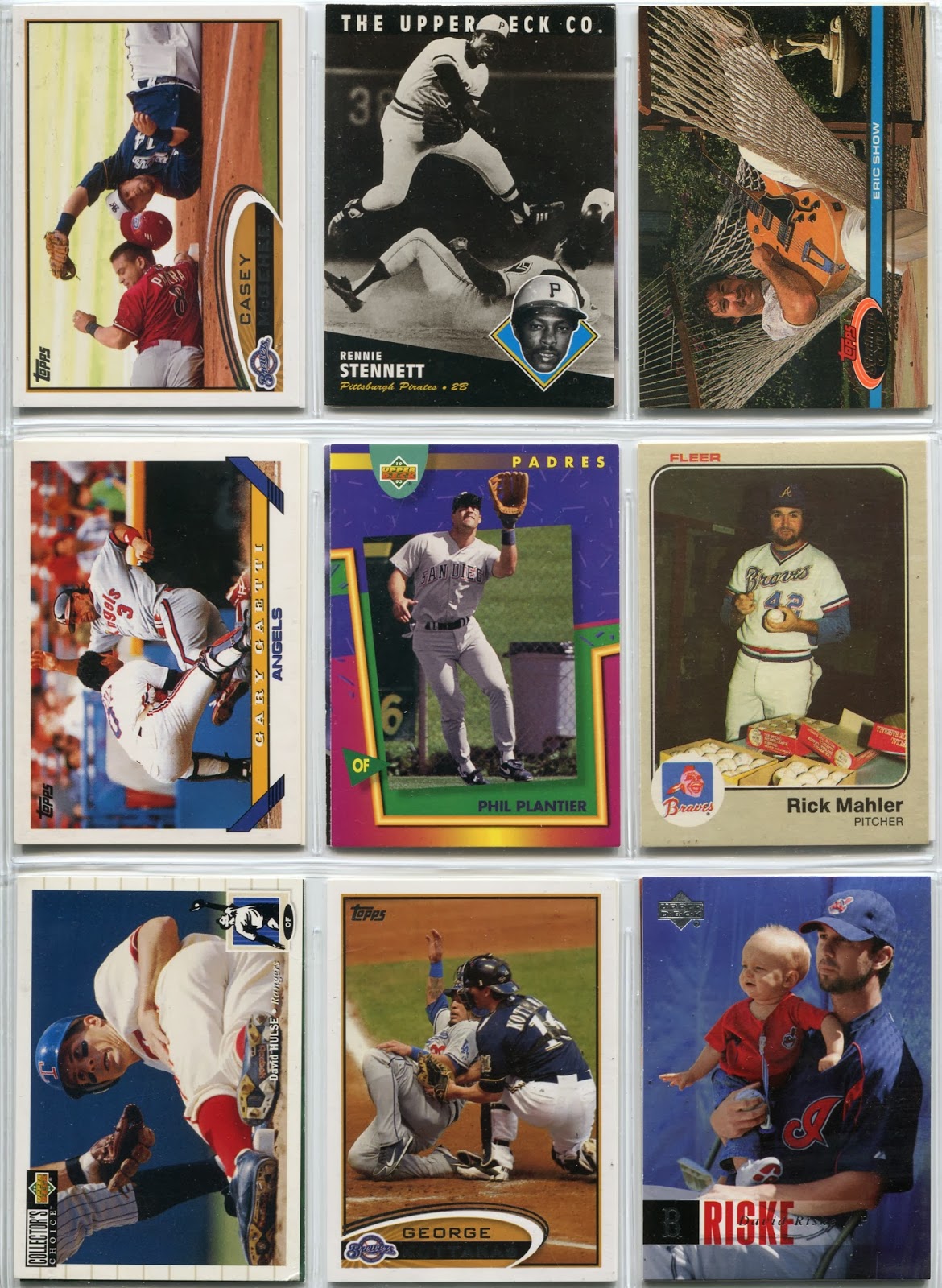 I found myself across the street from Wrigley Field the other day.

Although it may be February already, seeing mounds of snow around the statues of Billy Williams and Ron Santo made baseball season seem a lot further away than it actually is.

That's one of the great things about baseball cards. The so-called "collecting season" never ends.

It's a year-round hobby.

With that in mind, let's dive into another page from my beloved frankenset. 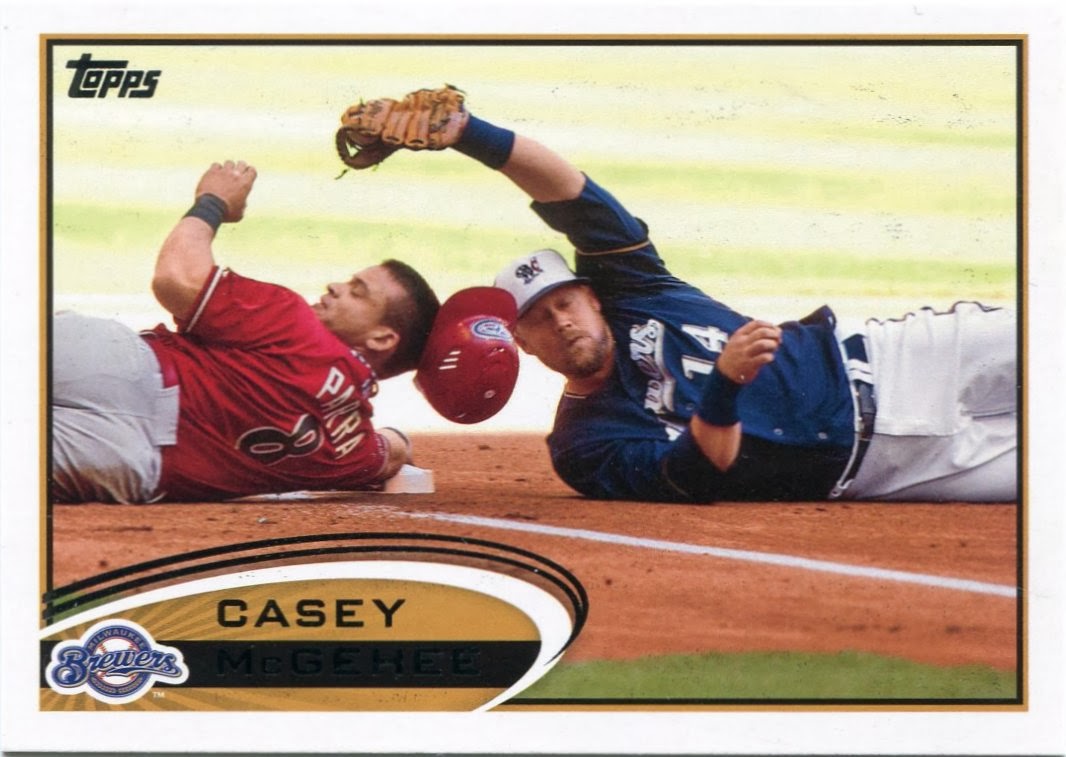 It's funny that I should post a card of Casey McGehee today.

I just got done watching Mr. Baseball on MLB Network a few minutes ago. Not a terrible flick, but far from the greatest baseball movie ever made.

In a striking similarity to the plot of Mr. Baseball, McGehee played all of last season in Japan before inking a one-year deal with the Marlins this offseason.

The third baseman had a couple good years with the Brewers before falling off the map. If you ask me, McGehee was rewarded with one of the best cards of 2012 with this masterpiece.

Not only did the photographer manage to get a shot of Gerardo Parra's helmet in midair, but he also happened to capture a moment in which both players' eyes were closed.

The patriotic hats give it away, but this shot was taken during a Brewers-Diamondbacks game on July 4th, 2011. Parra made it all the way to third on a botched pickoff play in the top of the third in that contest.

That's a lot of action for one baseball card. 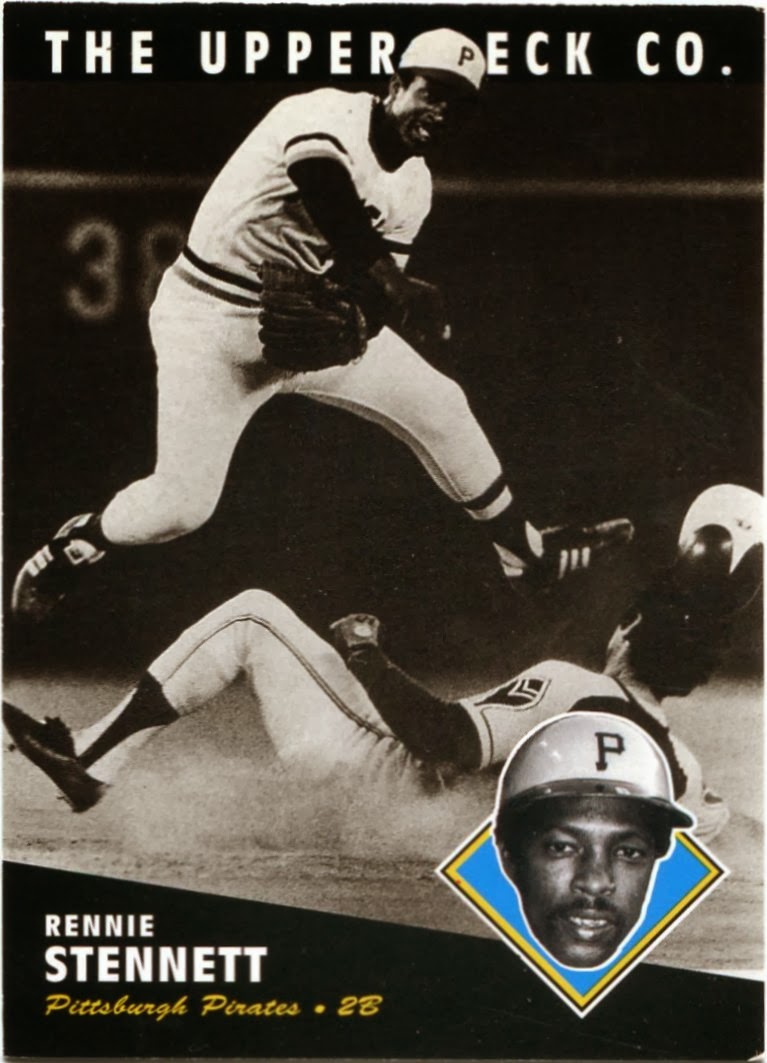 To me, 1994 UD All-Time Heroes is one of the greatest sets ever made.

Still, you won't be seeing a lot of them in this frankenset. That's because the vast majority of the players included in the checklist are "binder guys". Given that my frankenset is exclusive to non-"binder guys", that doesn't leave a lot of wiggle room.

For whatever reason, Rennie Stennett is one of the few who fell through the cracks. He's best known for going a perfect 7-for-7 in a 22-0 rout of the Cubs in 1975.

In yet another "helmet in midair" card, Stennett is featured in the midst of turning a rather ferocious double play here.

If you don't have any All-Time Heroes in your collection, I'd recommend sampling at least a couple. 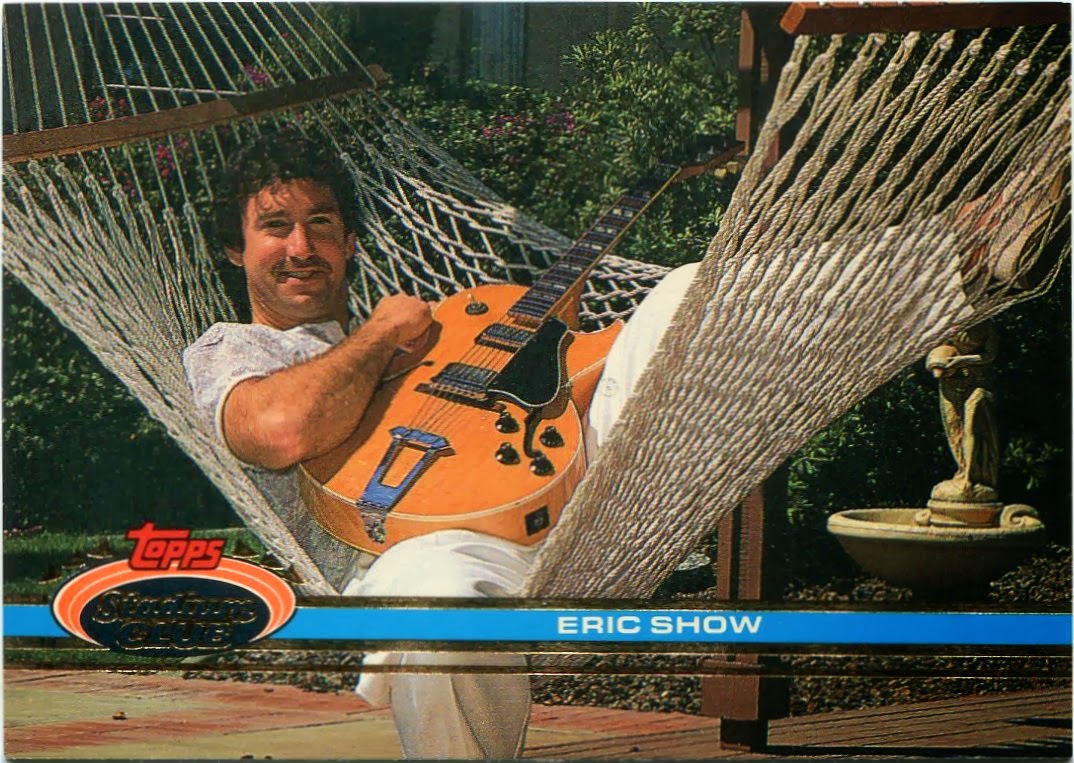 Given my musical ties, I'm especially partial to this terrific frankenset nominee.

Once again, it's rather coincidental that I should post a musically-themed card this afternoon. Fifty years ago today, the Beatles took over America with their performance on The Ed Sullivan Show.

Eric Show is more known for his work on the mound, but this card suggests he had musical aspirations as well. That's a pretty sweet ax right there. (I play guitar, but I don't know a ton about different makes and models and that sort of thing.)

Plus, it further shows that Stadium Club wasn't afraid to go way outside the box with their photography. 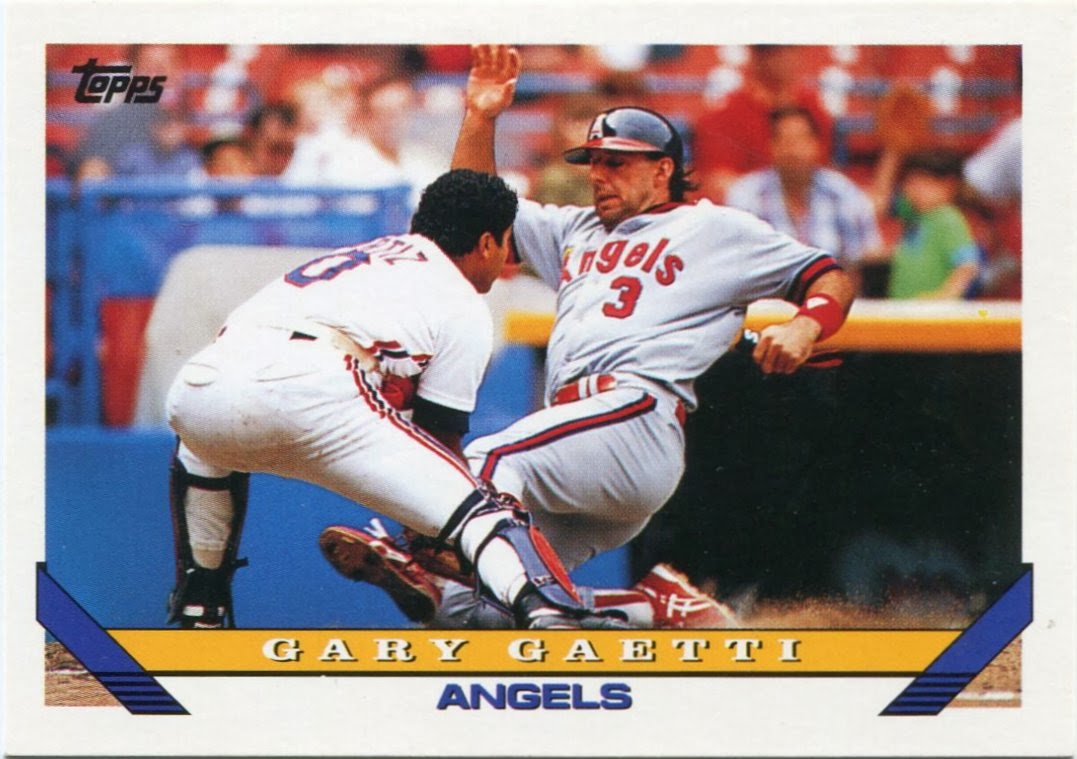 Mr. Gaetti is part of the 1993 Topps "trifecta" that I've mentioned a few times on this blog already.

In a photo that was snapped just a split-second after Junior Ortiz's '93 Topps issue, Gaetti is shown being tagged out in this great "play at the plate" shot.

It'll take a lot to knock a great card like this out of my frankenset. 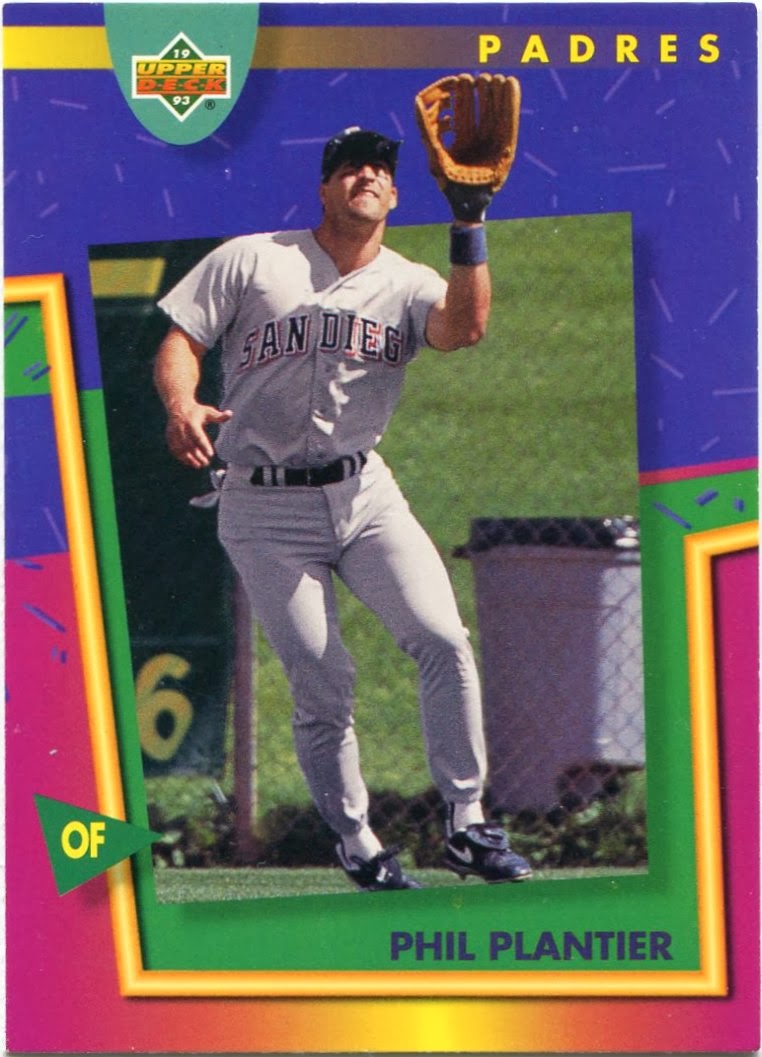 On the surface, this may seem like your standard fielding shot.

Until you notice the lurking trash can in the background, that is. 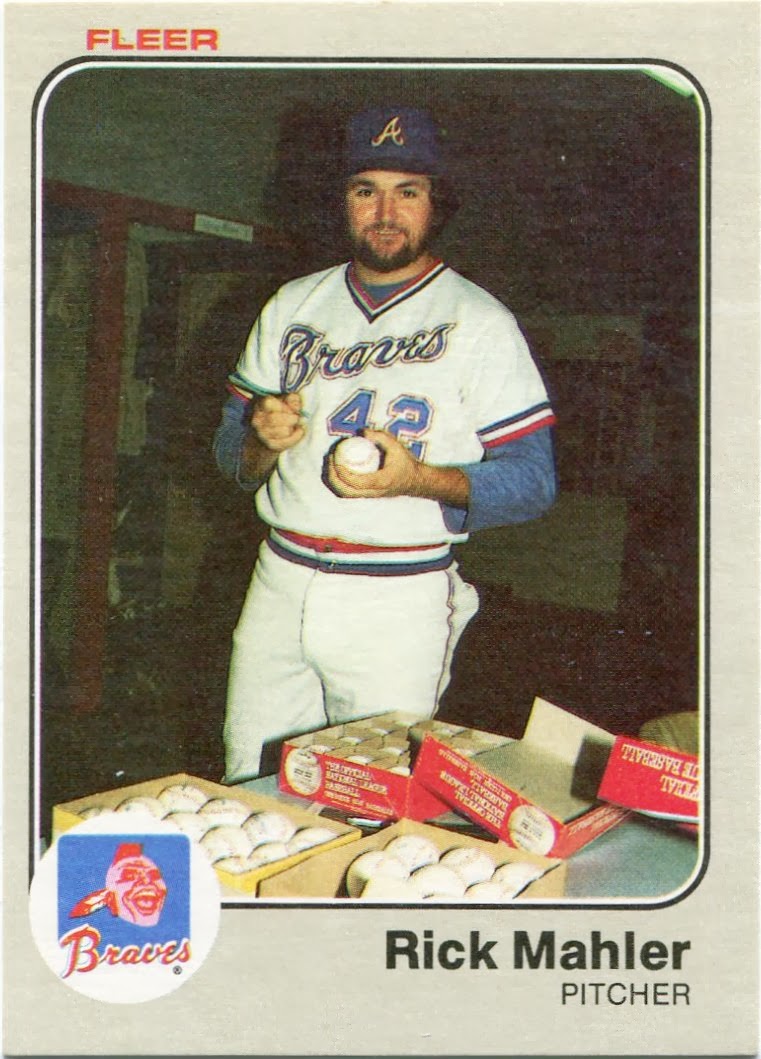 Once I finally looked past the drab borders of 1983 Fleer, I found quite a few nice cards lying underneath the surface.

This neat clubhouse "autograph" shot of Rick Mahler was one of the more pleasant surprises. 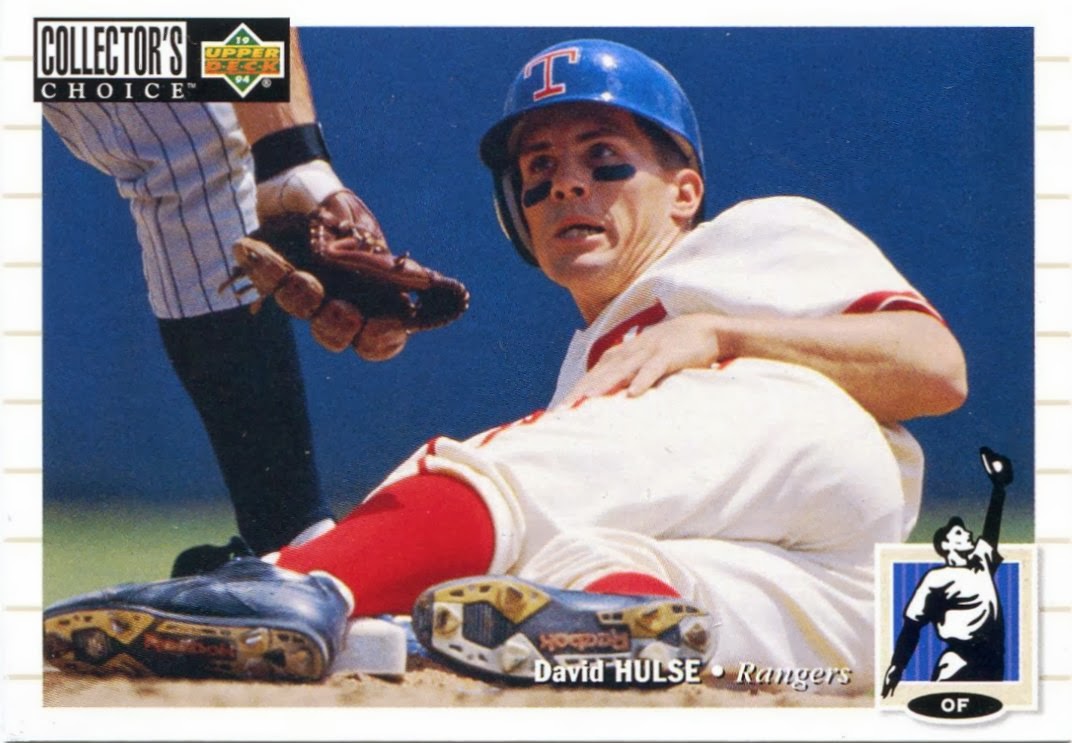 With the throwback fad sweeping the nation in the early '90s, a few of the newer franchises simply decided to create some of their own old-time jerseys.

The Senators moved to Texas and became the Rangers after the 1971 season. Choosing not to simply wear old Senators duds (for reasons I can't explain), the team created faux-throwbacks for their players to wear in 1993.

Though they're better seen on other cards, you get a glimpse of them on David Hulse's 1994 Collector's Choice issue.

Teams like the Rays are still reviving the faux-throwback fad today.

I can't decide whether I love it or hate it. 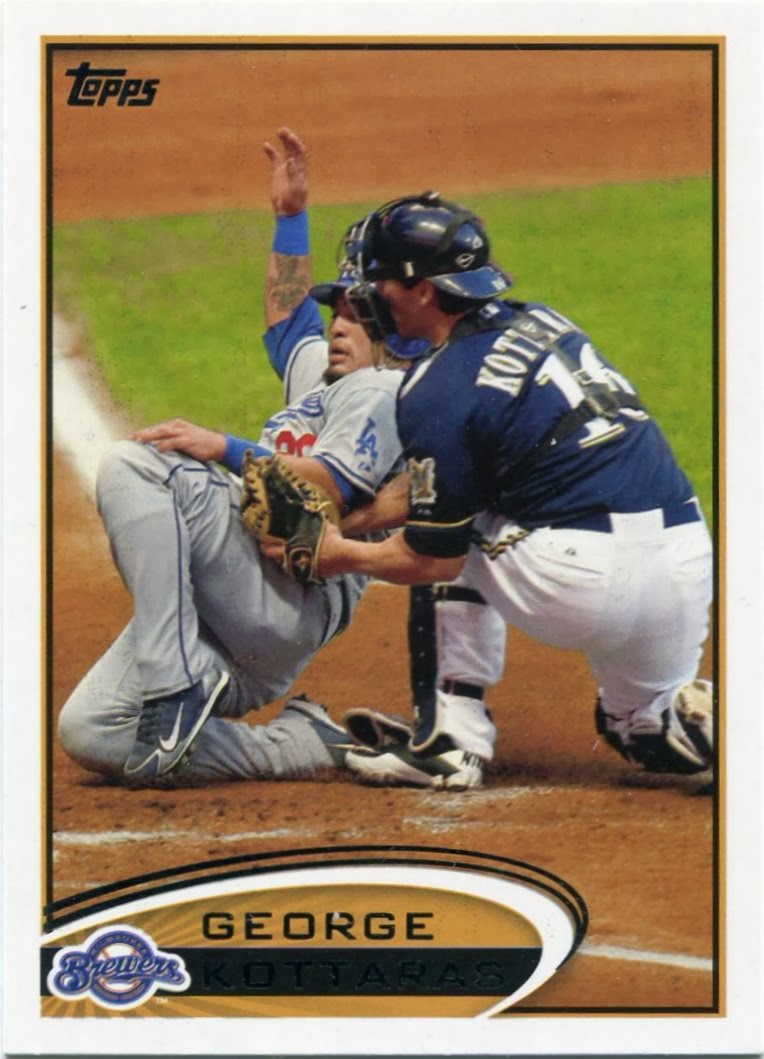 With Mr. McGehee, Kottaras is the second 2012 Topps Brewer included in this frankenset page. 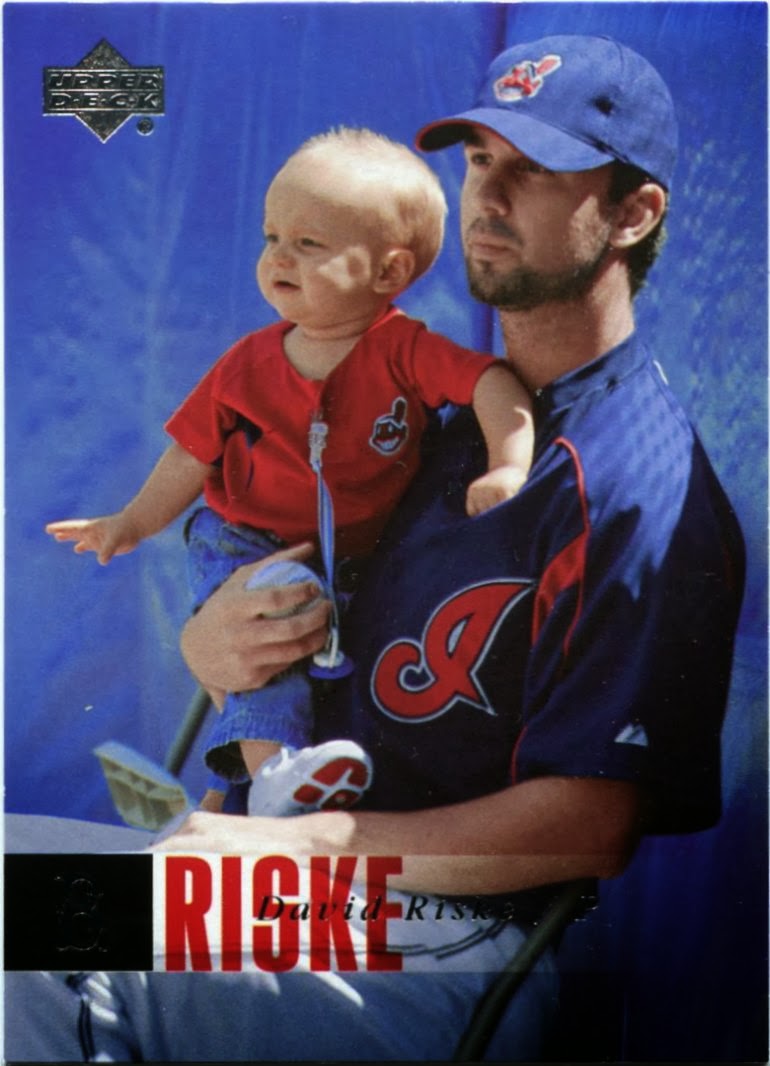 This post ends with a member of my "cards with kids" mini-collection.

It's a rather peaceful way to close out yet another frankenset page.
Posted by Nick at 4:53 PM

Great variety on this page. I really dig Stennett's power-turn on the Double Dip card. Whether he kicked the helmet off of that poor Brave or not, I'm going to choose to believe he did. Bonus points, too, for the appearance of the cool arm-sleeve feather on the base runner's uni.

The UD alltime heroes is a great set.

I love that Eric Show card. He supposedly enjoyed music more than baseball and from what I've read, he has an album on iTunes.

I found this on YouTube, it is a 45 he did called "Padres Win Again".