Be excellent to each other 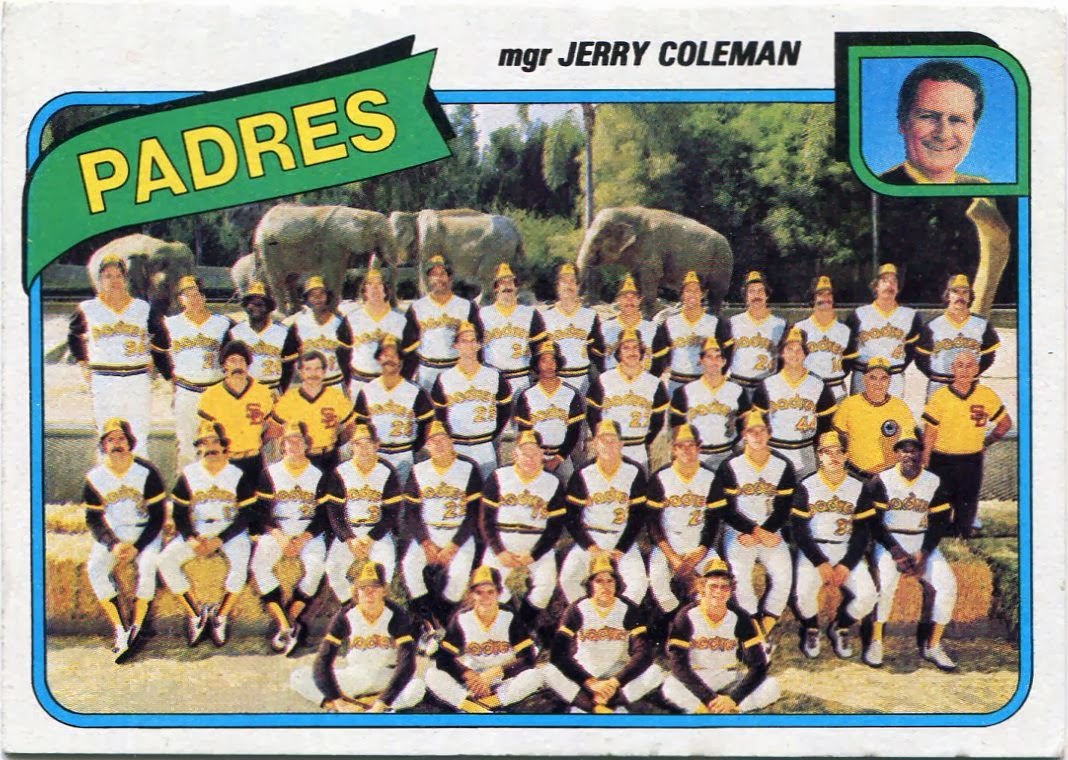 I've let it be known that Bill and Ted's Excellent Adventure is one of my favorite movies.

Though I'm not sure where or when I first watched it, I've probably seen the flick about seven or eight times. I'm not the type of person who watches movies once or twice and then abandons them forever.

Of course, one of the more memorable lines from Bill and Ted is, "Be excellent to each other."

At the risk of sounding too corny, it's a motto I've adopted as a blogger. Though I've somewhat slacked on mailing out packages lately, I do my best to spread some cardboard goodness to the rest of my blogger buddies. I also try to read and comment on as many different blogs as I can.

In my two-plus years in this business, the blogosphere has been nothing short of excellent to me.

One especially excellent person around here is Marcus of the awesome blog "All the Way to the Backstop...". I know he's a big Bill and Ted fan as well from the couple times I've mentioned the film on this blog.

Marcus was nice enough to drop a substantial bubble mailer of cardboard onto my doorstep recently. He's always been one of the best at finding great cards for this crazy collection of mine.

Though I'm not sure I specifically requested it, I think I commented on how awesome this Padres team card was when Marcus showed it on his blog recently. He must've taken the hint, as it wound up in this package.

The vast majority of team cards I've seen are fairly boring. But not this one. In fact, I'd wager that it's the greatest team card ever printed.

After all, not many others can claim they have elephants in the background. 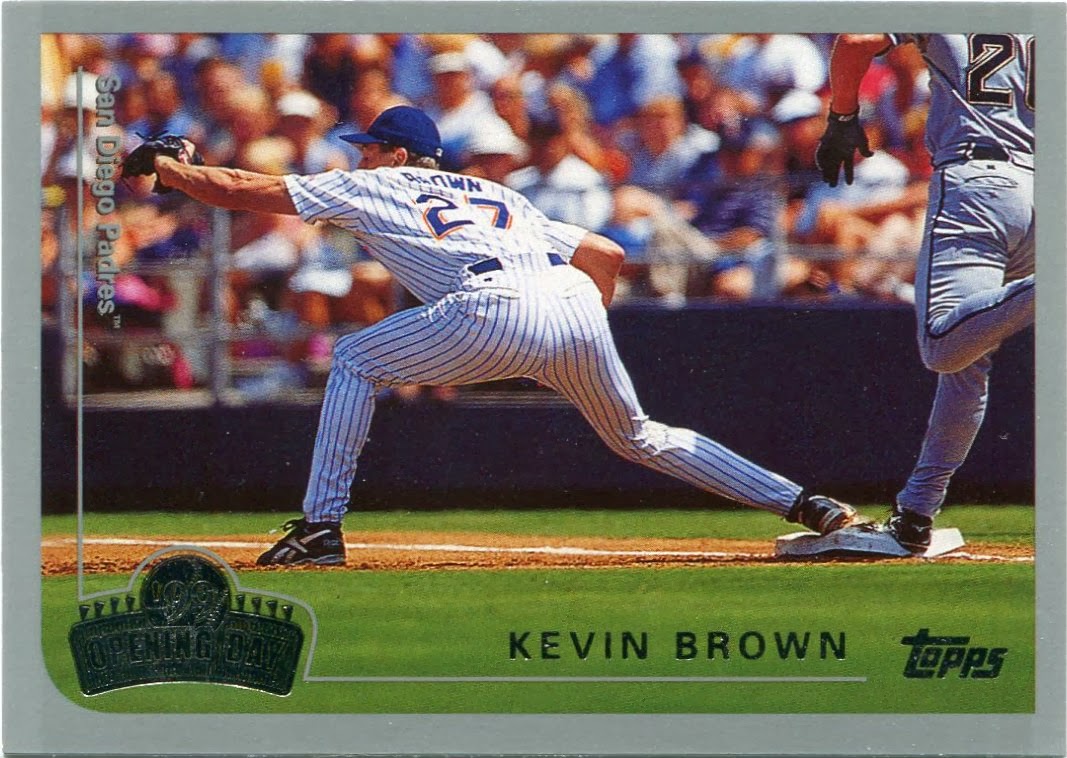 If for some reason you don't know already, Marcus is a big Padres fan.

It makes sense, then, that he included a decent amount of Friars in this package.

Though this Kevin Brown card has existed since 1999, this is the first I'm seeing of it. I'm a little shocked by that. There aren't many cards that feature pitchers covering first.

Much less in horizontal form. 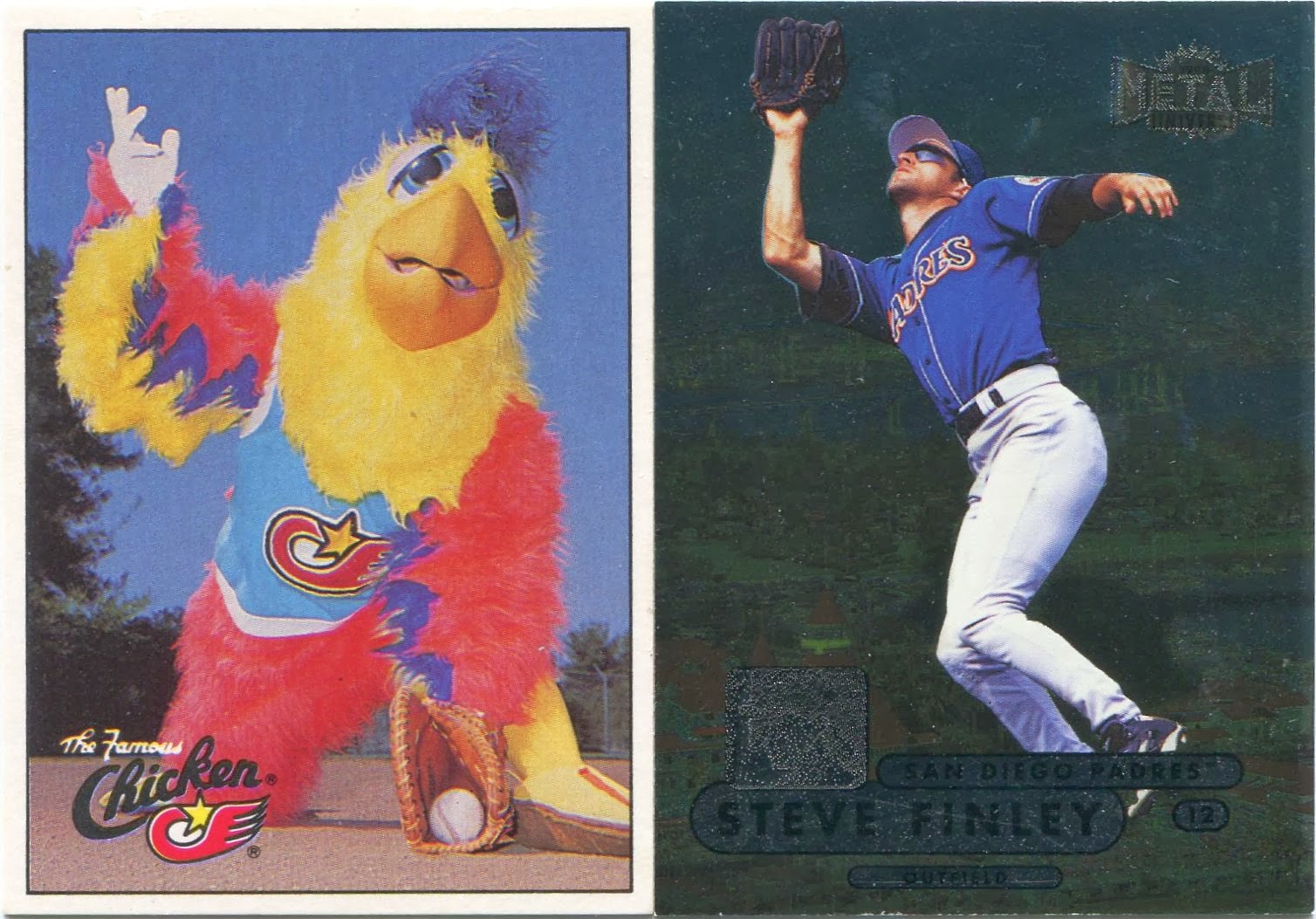 The San Diego Chicken ushered in a whole era of fun, furry, and sometimes creepy mascots in every sport. Whether that was for better or worse is up to you.

I know Marcus is a big Steve Finley fan, so it's appropriate that a couple of his cards wound up in this assortment.

Though they don't scan very well, I'll always have a soft stop for the Metal Universe brand.

Don't ask me why. 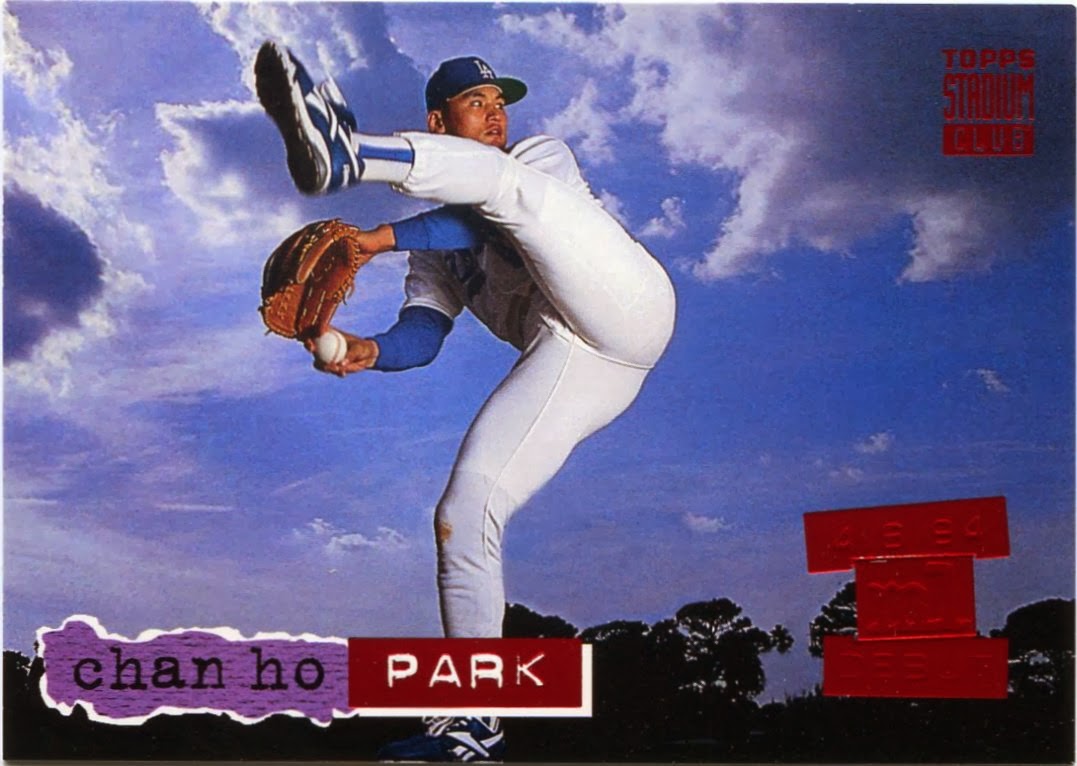 Though he did bulk up my Padres binders quite a bit, Marcus included a good amount of other knick-knacks as well.

This Chan Ho Park is one of those cards that I've seen around the blogs quite a bit, yet didn't already have in my collection. Marcus put an end to that.

There's little denying the beauty of this one. 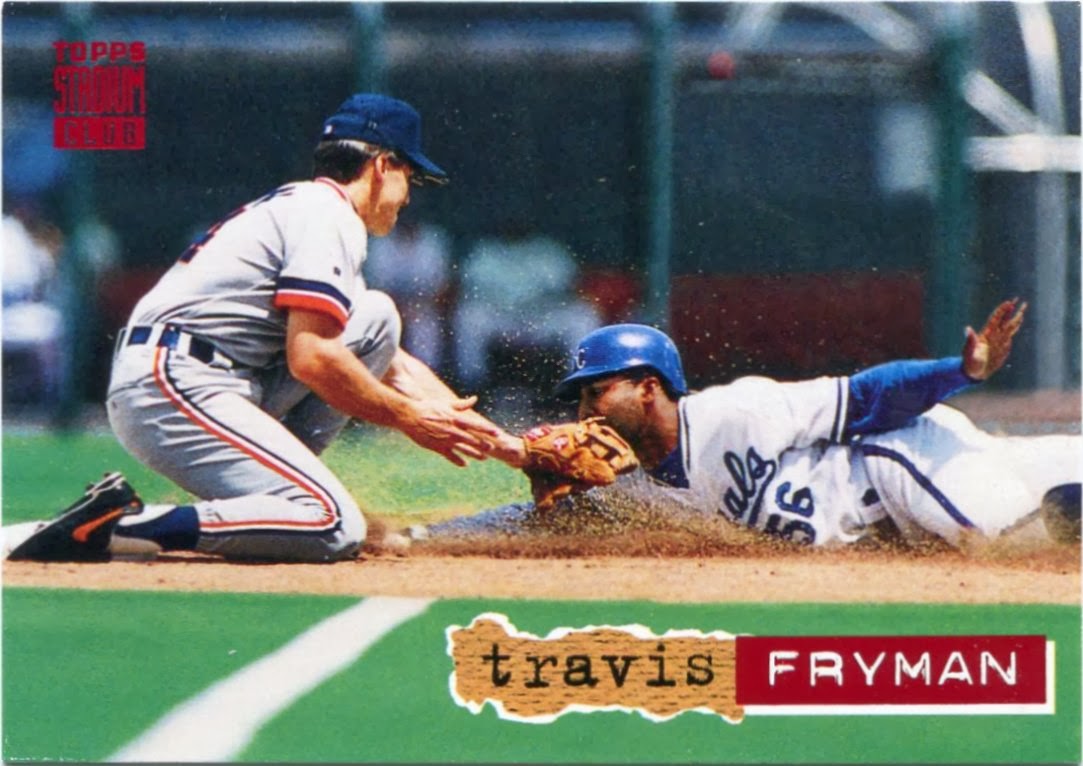 I actually included this one in my most recent Just Commons order, but the package Marcus sent beat Just Commons by a day or two.

The hot corner is probably the most ignored base in the hobby. First, second, and home get a fair deal of recognition, but getting a good shot at third remains somewhat of a rarity.

Thankfully, Stadium Club was around to give third sackers like Travis Fryman a piece of the action. 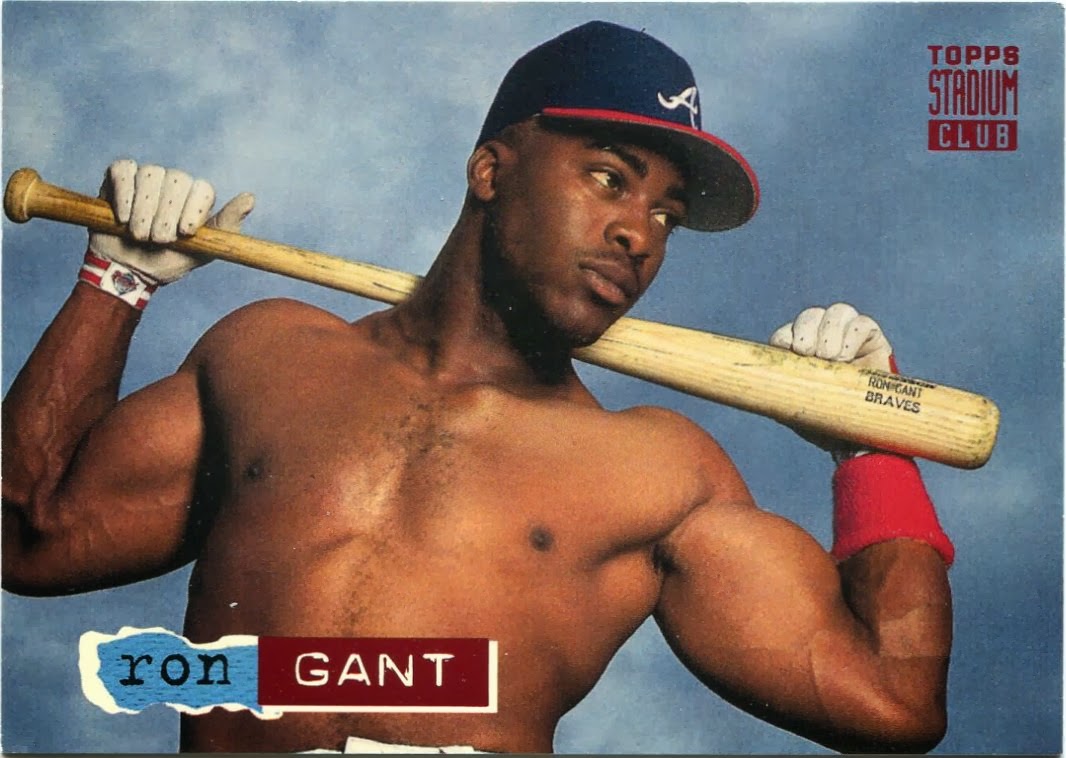 I can't decide if I love or hate this card.

Because of its sheer strangeness, Mr. Gant was on my short list for future "Dime Box Dozen" nominees before Marcus sent it along with the rest of his '94 Stadium Club beauties.

High school gym classes aside, I've never voluntarily been to a gym in my life. I'm sure Ron Gant has. 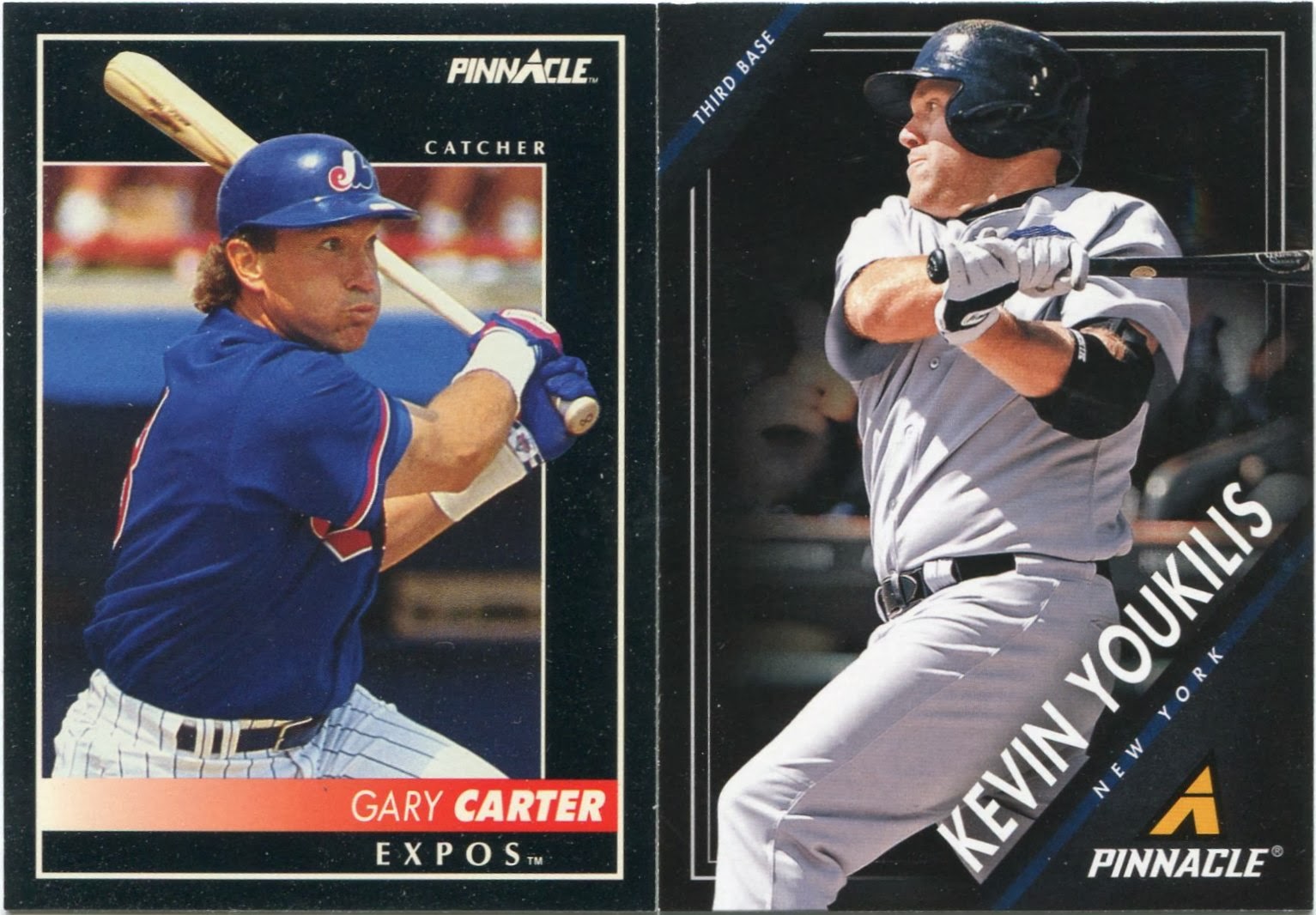 I know Marcus and I share a common love for Pinnacle, though I wasn't as big on the 2013 edition as he was.

I've been wanting to somehow incorporate a side-by-side scan of 1992 vs. 2013 Pinnacle on this blog for a while now.

This package finally gave me a good excuse to do it. 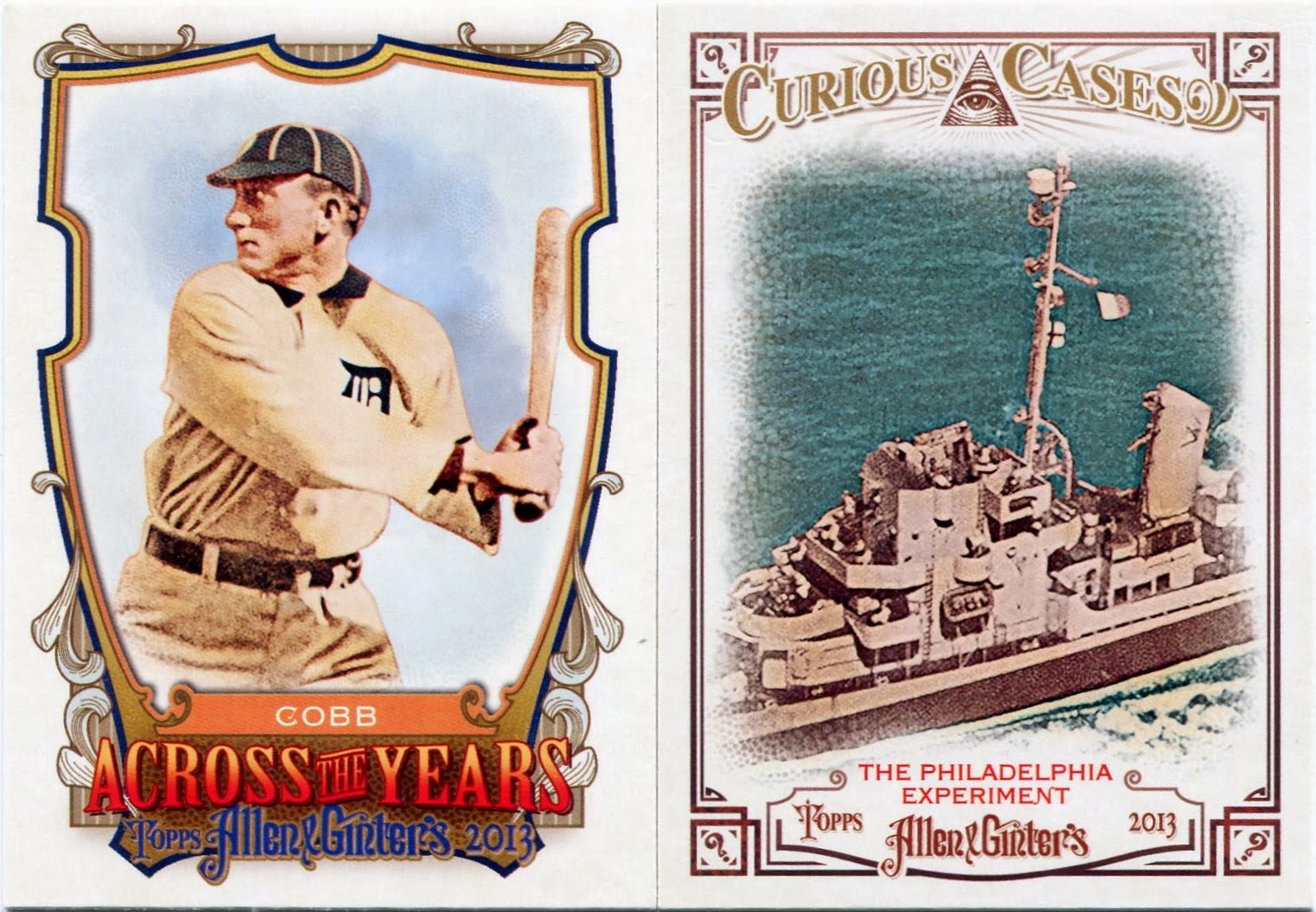 Thanks to that "Across the Years" insert, I now know that Ty Cobb and Keith Richards share a birthday.

Now there's a piece of trivia for you. 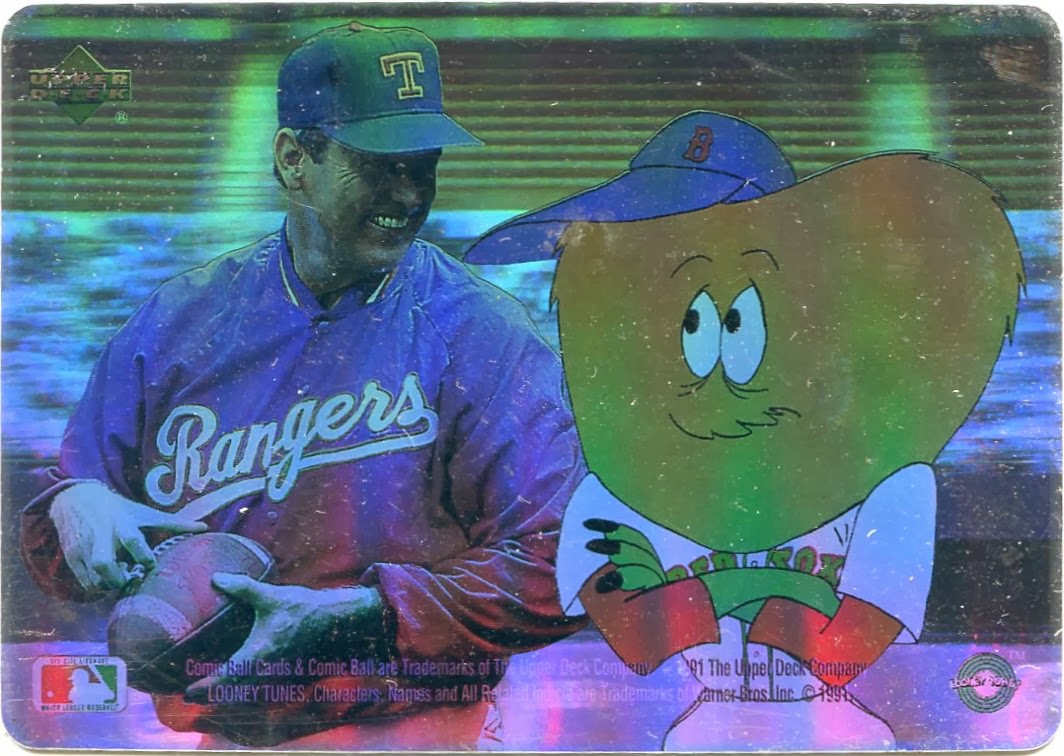 This is one of those quirky hologram deals that made the rounds in the early '90s.

I wouldn't mind seeing them return here in 2014. 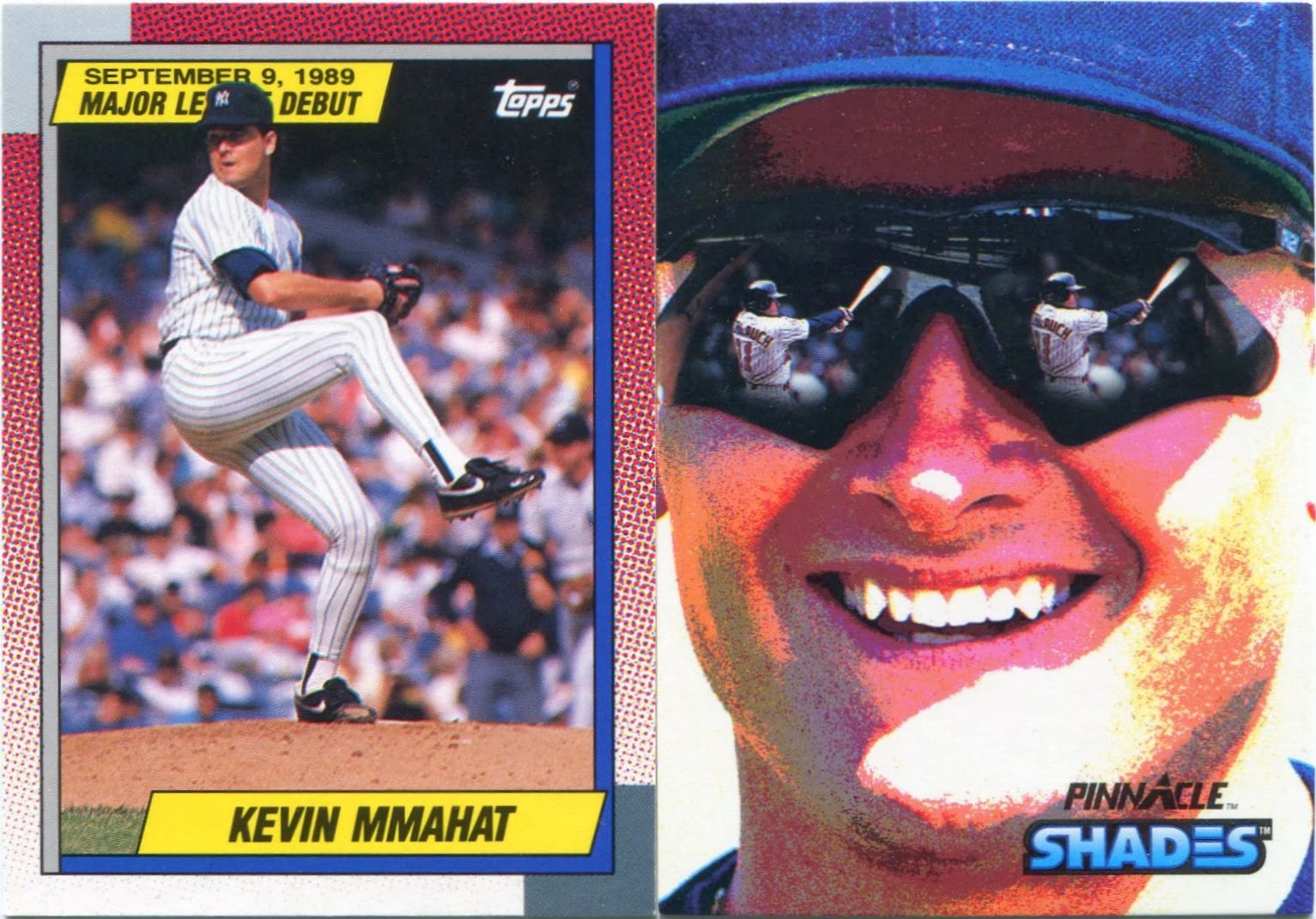 Marcus again spread the Pinnacle love with Chuck Knoblauch and his neat single from the "Shades" subset in 1992.

At first, I couldn't figure out why he sent me the card on the left. On the surface, it seemed like another ordinary card from 1990 Pro Debut. (Though I'd love to see the Pro Debut concept make a return, that's another topic for another post.)

That's until I looked at the last name carefully.

I don't know about you, but I've never seen a name that begins with two Ms.

People butcher my last name on almost a daily basis, but I can't imagine the pronunciations that guy must've had to deal with in his life. 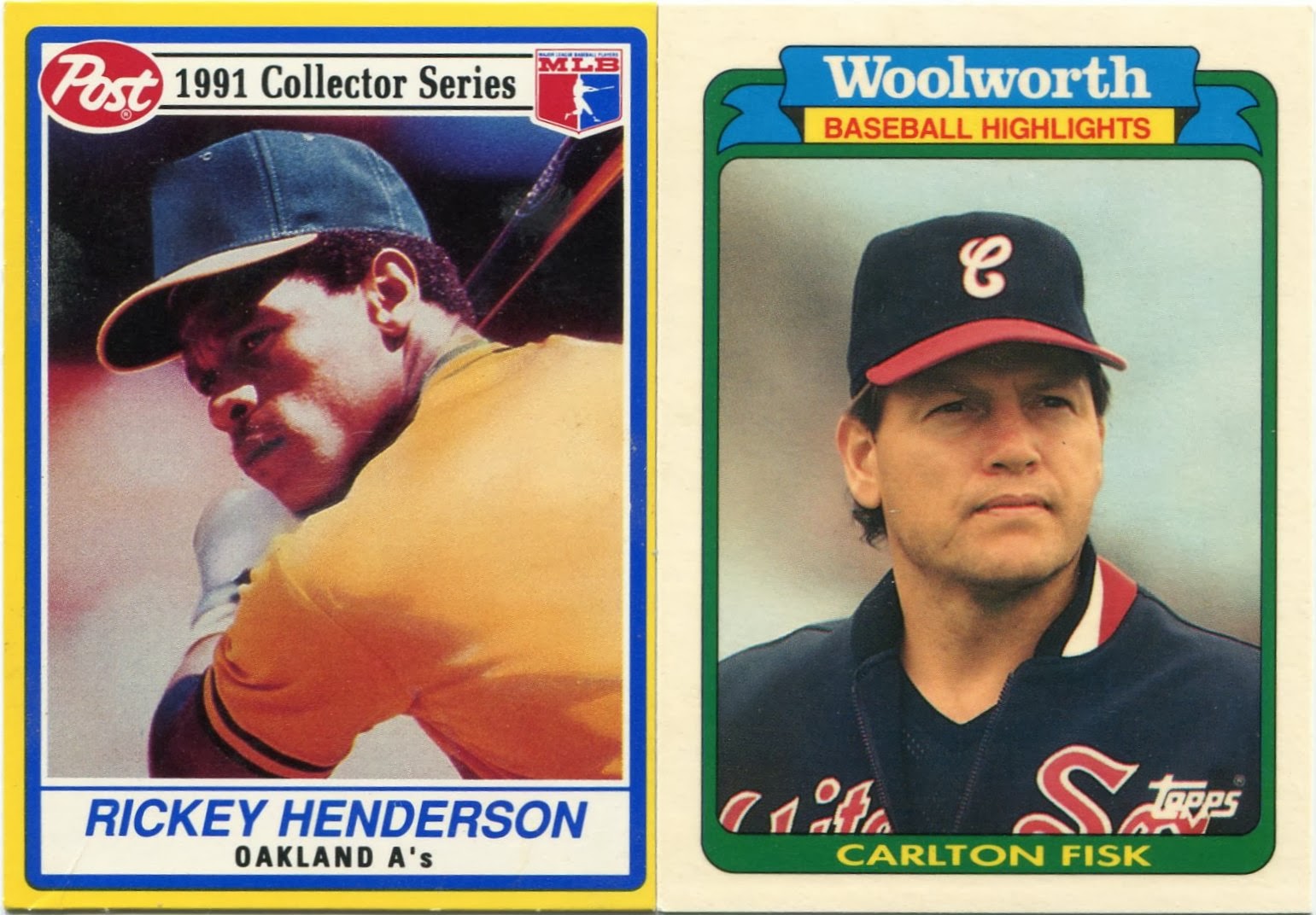 You can never go wrong with oddballs. 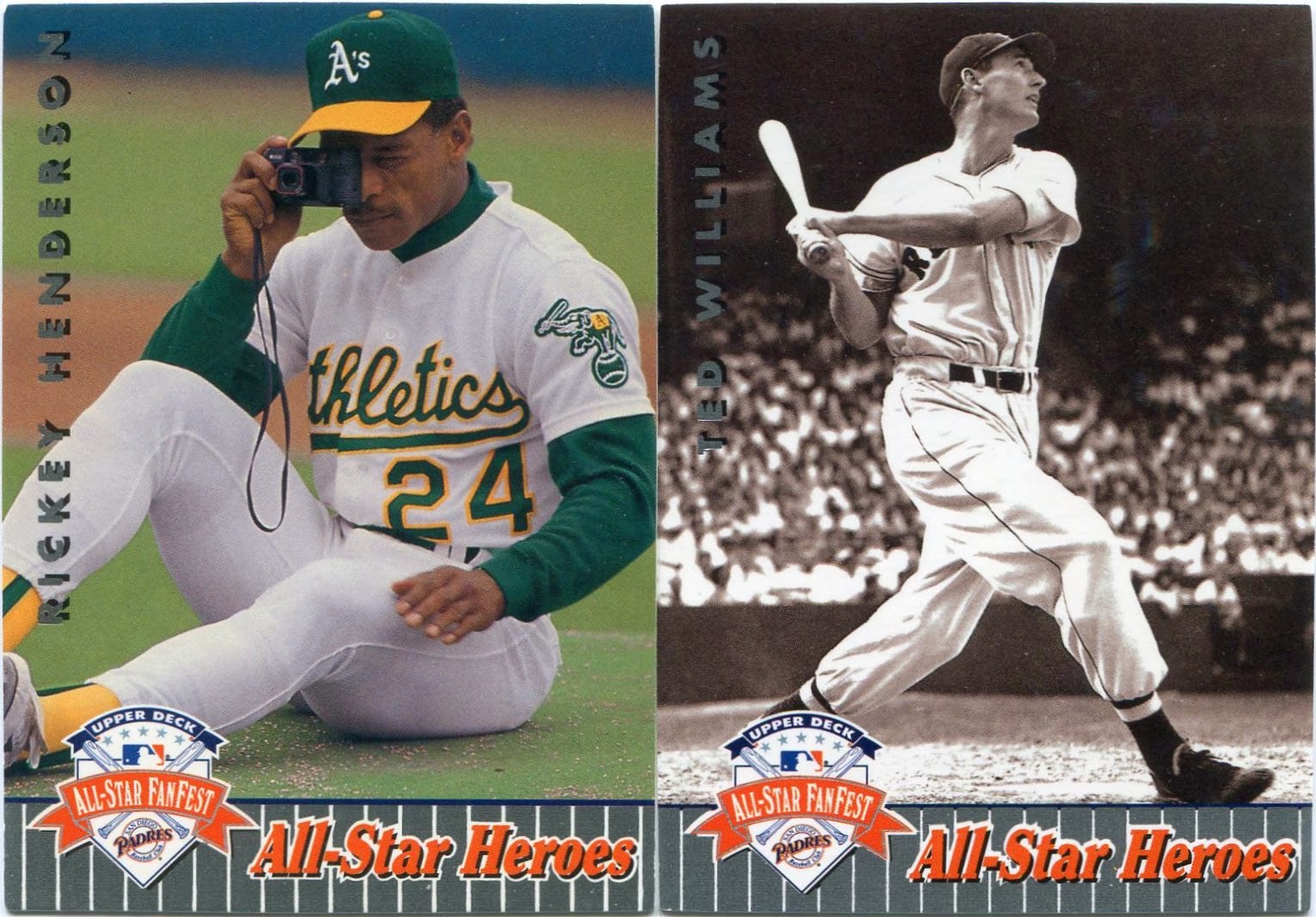 From what I can gather, these were given away at Fan Fest during the 1992 All-Star Game in San Diego.

I'd had a few in my collection already, but Marcus sent along a stack of about a dozen more.

Though they're all great, I'm especially fond of that "behind the camera" shot of Mr. Henderson. 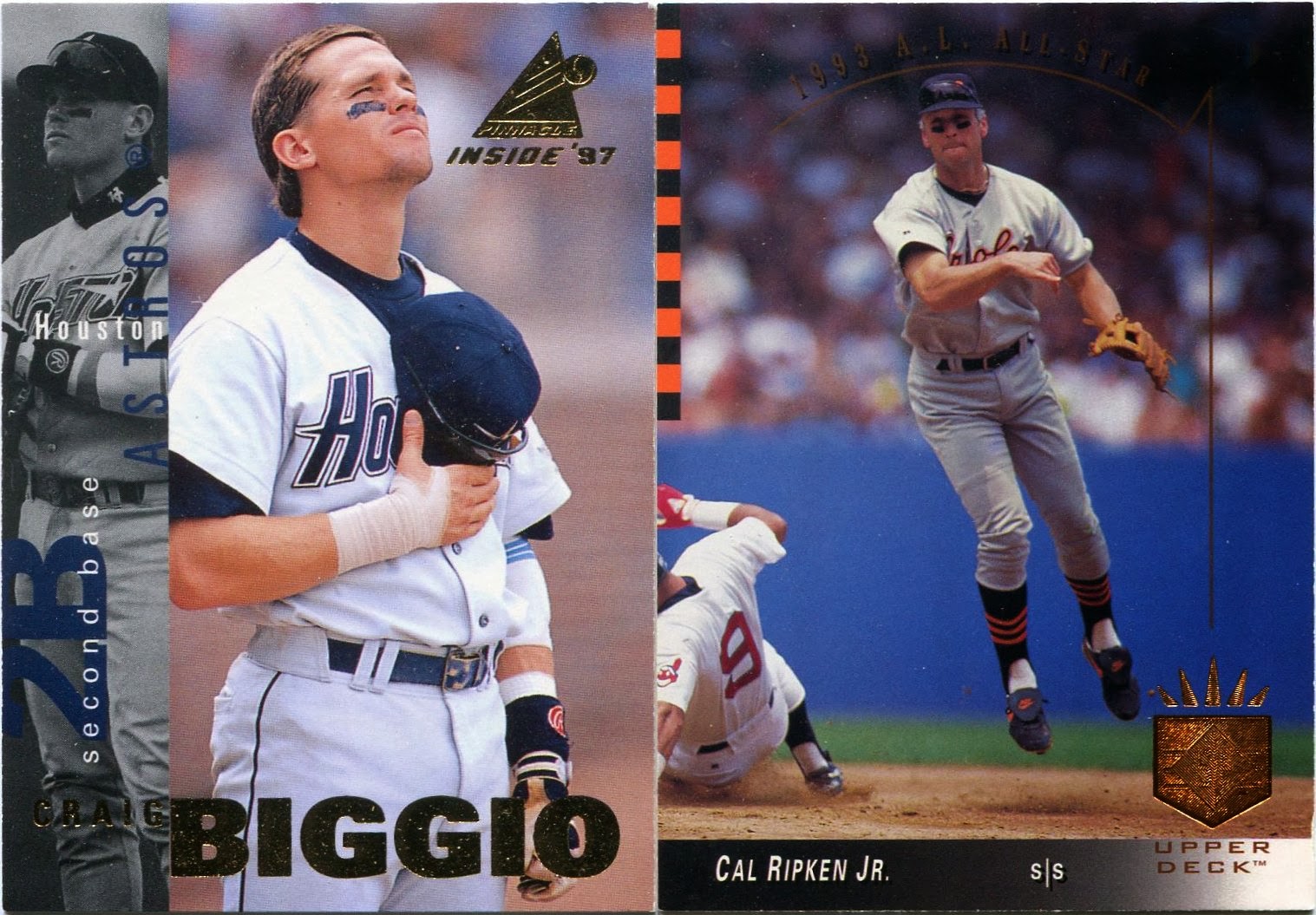 Marcus also hit a couple mini-collection needs of mine.

The Biggio is a treasured new addition to my "anthemic" theme. The Ripken, on the other hand, looks to be both a "throwback" and "double dip" mini-collection score. 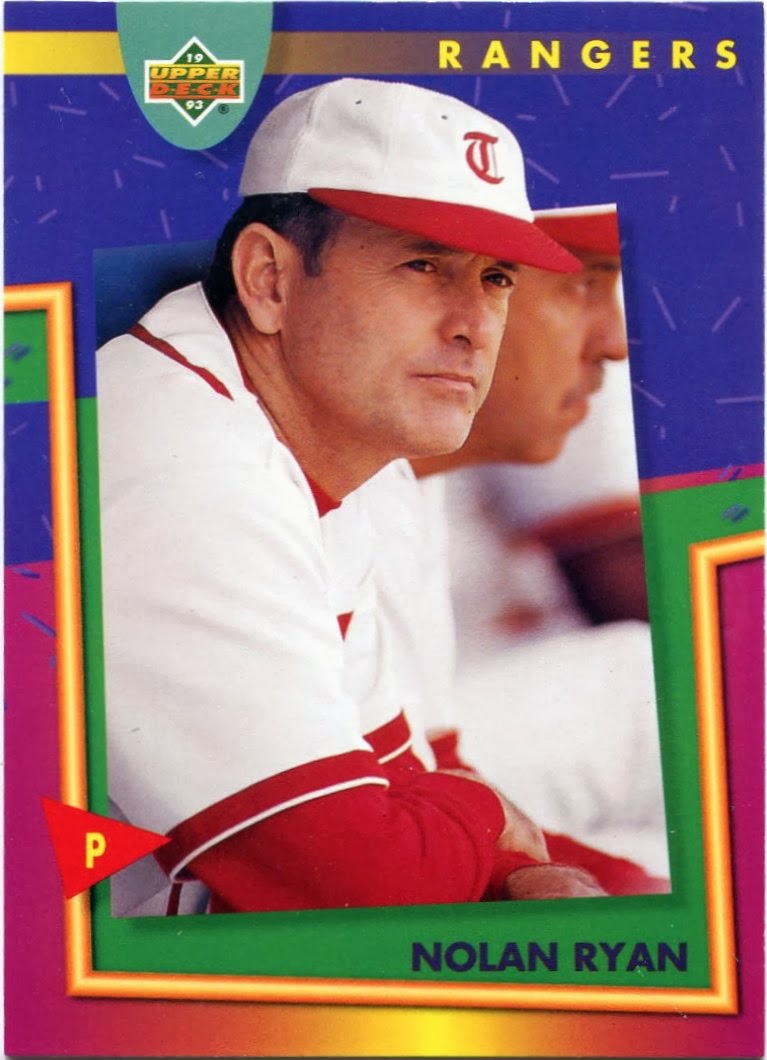 As I've mentioned before, the Rangers created faux-throwbacks in order to capitalize on the craze going on at the time. I do tend to group these under my "throwback" theme. If nothing else, I appreciate the effort of the Rangers franchise.

In fact, this 1993 UD Fun Pack Nolan Ryan was a "Dime Box Dozen" need of mine. I love the clash between Ryan's old-school demeanor and that silly fake throwback he's wearing in this shot.

The look on his face kind of gives off an "I'm too old for this" vibe.

I don't know what else I can say about this spectacular batch of cards from Marcus. It definitely had it all.

People like him have been most excellent to me during my time around here, and I can't thank them enough for that.

I hope I can be just as excellent in return.

Go figure I need that Gant too. I'm pretty sure I sent Marcus that chicken (he already had one though)GLAD IT FOUND A NEW HOME WHERE I KNOW THE GUY! LOL.

Dude, I believe you will never have a triumphant blog until you get Eddie Van Halen.

I haven't seen Bill & Ted as much as you have, but every time I see a Circle K, I think "Strange things are afoot..."

Those elephants are odd. Cool, but odd. I guess the photo was taken at the San Diego Zoo?

I remember Kevin Mmahat; I think the Yankee broadcasters said it "MA-ma-hot".

The Padres had another team card taken on the beach. There are a lot of good team cards in the late 70s. The best is the 1978 Topps Phillies team card. Find a picture online and check out Bake McBride picking his nose, all the way on the right.

I absolutely love those early 80's Donruss SD Chicken cards. It's a shame that they only produced them for three years. And the TSC Park card is awesome!

It's after posts like this that my love for baseball cards strike again!