Into the Sunset, Pt. 24: Reggie Jackson 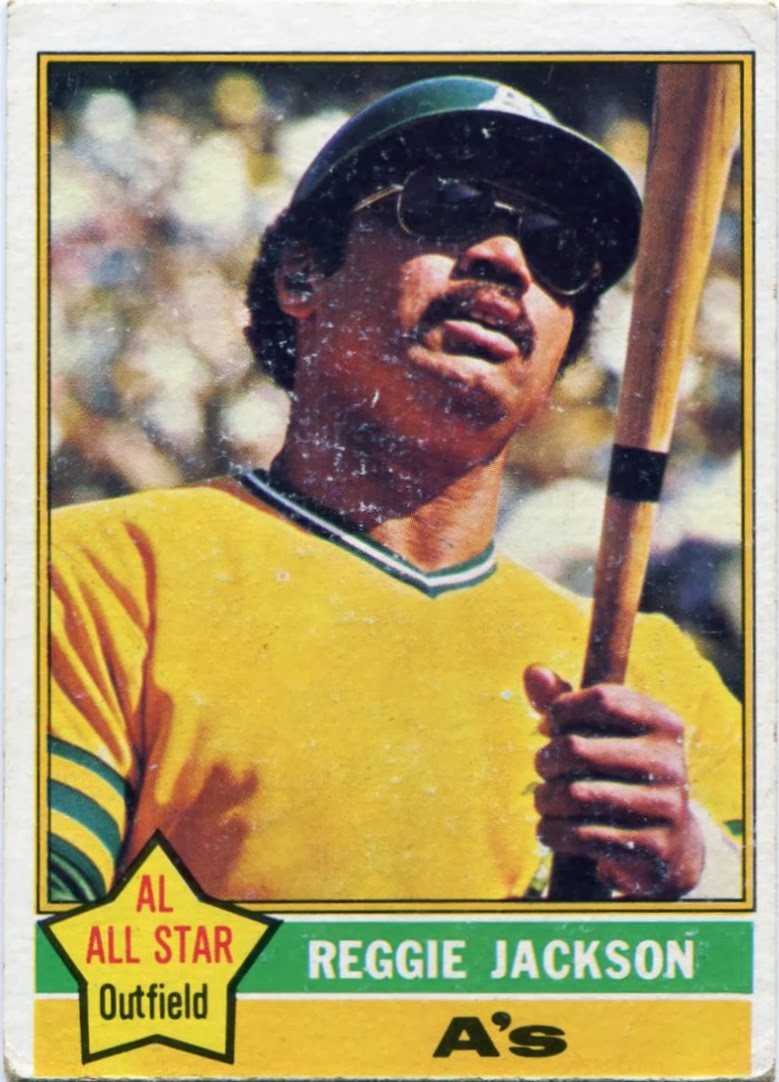 Reggie Jackson may well be the most polarizing figure in baseball history.

I can't say I was around in the '70s or '80s, but I'd imagine most fans either loved him or hated him. I don't see there being a whole lot of middle ground with Reggie.

We may look at Jackson's hot-dogging and rather self-indulgent actions as commonplace in the sports world these days, but he was pretty much on his own during his heyday.

Me, I love Reggie Jackson. And I know my dad does, too. He was definitely a one-of-a-kind ballplayer. I just wish I could've seen him play.

I think Reggie's 1976 Topps issue best sums up his career. Confidently eying his bat, craving that next home run. The only problem was that he'd already been shipped to the Orioles by the time this card hit the streets.

After a memorable stint as "the straw that stirs the drink" with the Yankees and five years with the Angels, Jackson found himself back in Oakland in 1987 for the final year of his career.

Luckily for my collection, he has some of the most interesting "sunset" cards in history. 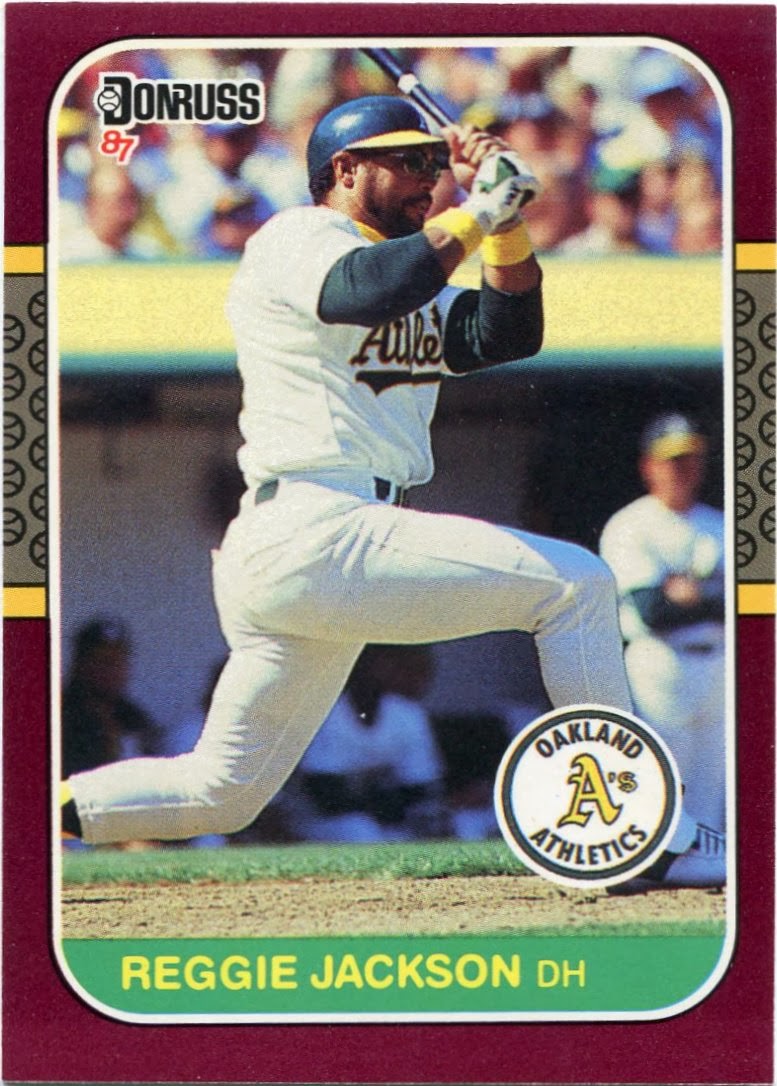 Reggie Jackson actually has a pretty important tie-in to the world of baseball cards.

He was pretty much the first big-name spokesperson for Upper Deck during the brand's early days. Without him, there's a chance that UD wouldn't have taken off the way it did, which would've dramatically impacted the hobby for years to come.

Without Reggie, would the overproduction era have happened in the first place? One can only wonder.

Donruss lost out on the chance to create a true Reggie Jackson "sunset" card by not including him in their 1988 checklist. They did, however, feature him with the A's in their 1987 Opening Day release, one that I think looked a little better than the regular Donruss design that year.

From my experience, though, cards from the '87 Opening Day checklist are fairly hard to come by.

I probably wouldn't have known about this one had I not found it in a 12/$1 box a couple years ago. 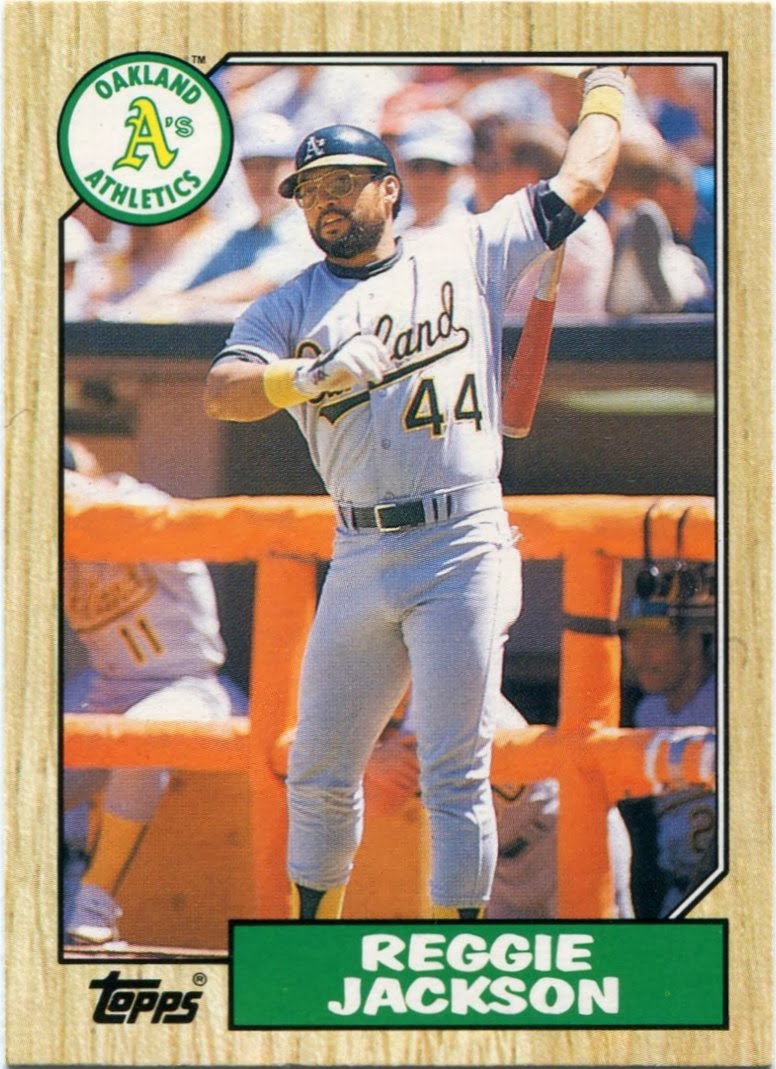 For whatever reason, Topps also refused to admit "Mr. October" into their 1988 checklist.

As a result, his last Topps card is the '87 Traded issue you see above. Not a superb one by any means, but a perfectly acceptable on-deck shot.

Although I like 1987 Topps way better than '88, I still would've rather seen Jackson get an appropriate send-off the next year. 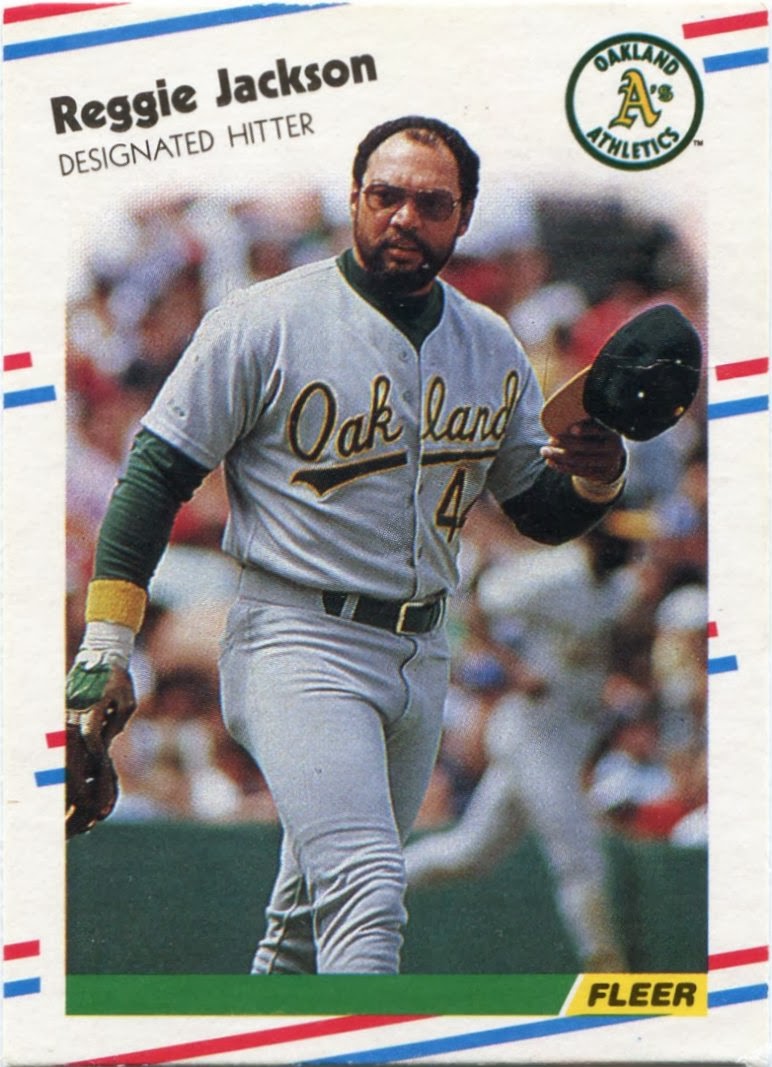 Fleer was one of the smart ones. Though I've never been as big on their 1988 design as others seem to be, I still give it a massive amount of credit for giving Reggie a proper send-off.

However, one company really went above and beyond in saying goodbye to "Mr. October". 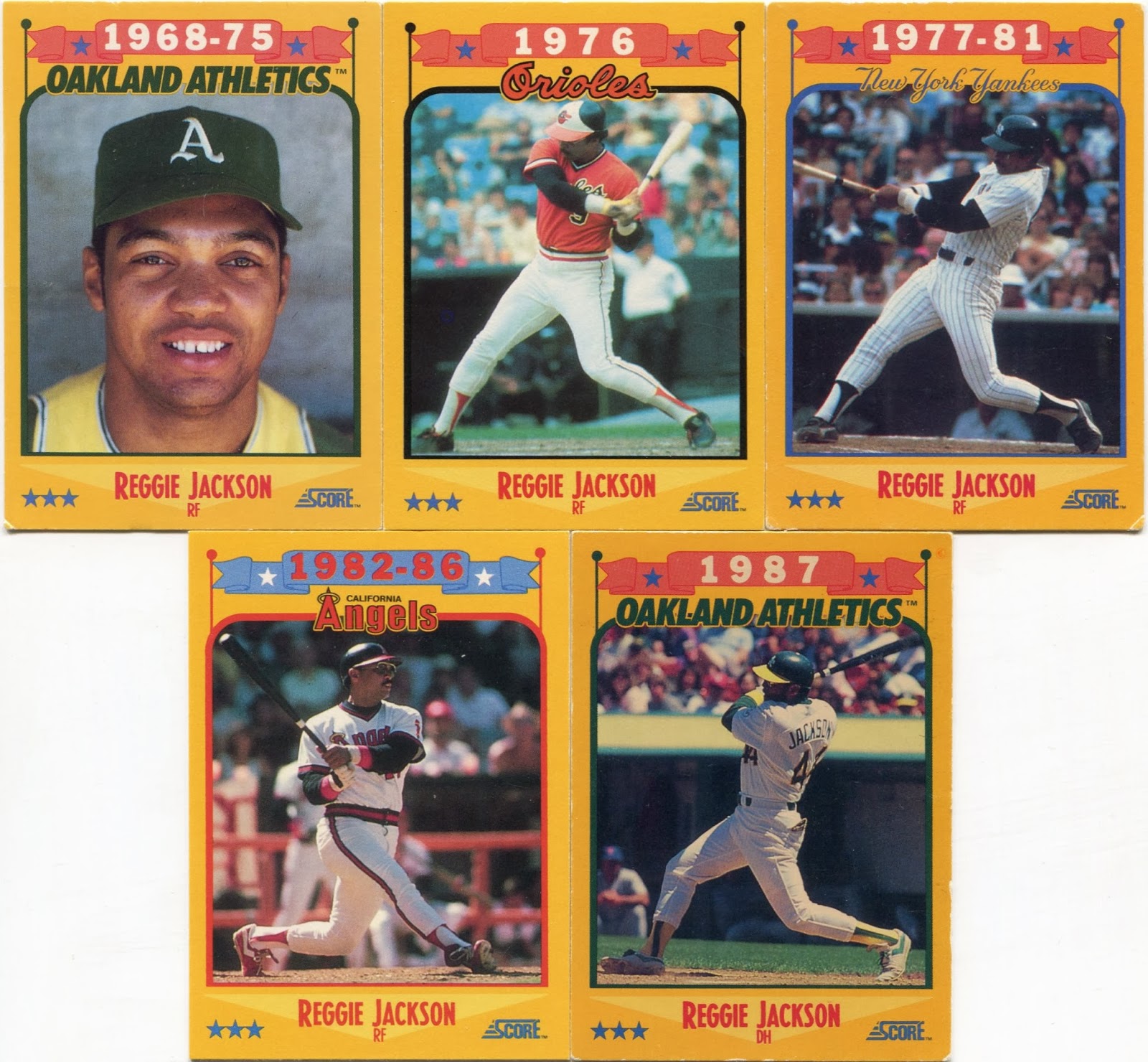 That company, of course, was Score.

In their very first year of existence, Score came up with one of the greatest innovations in cardboard history.

They devoted five spots in their inaugural 1988 checklist entirely to Jackson, documenting each of his career stops along the way. That includes his one-year stint in Baltimore. For a long time, it was pretty much the only relatively common card of "Mr. October" with the O's.

It's hard to explain just how much I appreciate this farewell subset. I'm baffled that other companies didn't at least experiment with this afterwards. How cool would it have been to have seen something like this with, say, Jamie Moyer? Or Vladimir Guerrero?

I know I would've loved it. 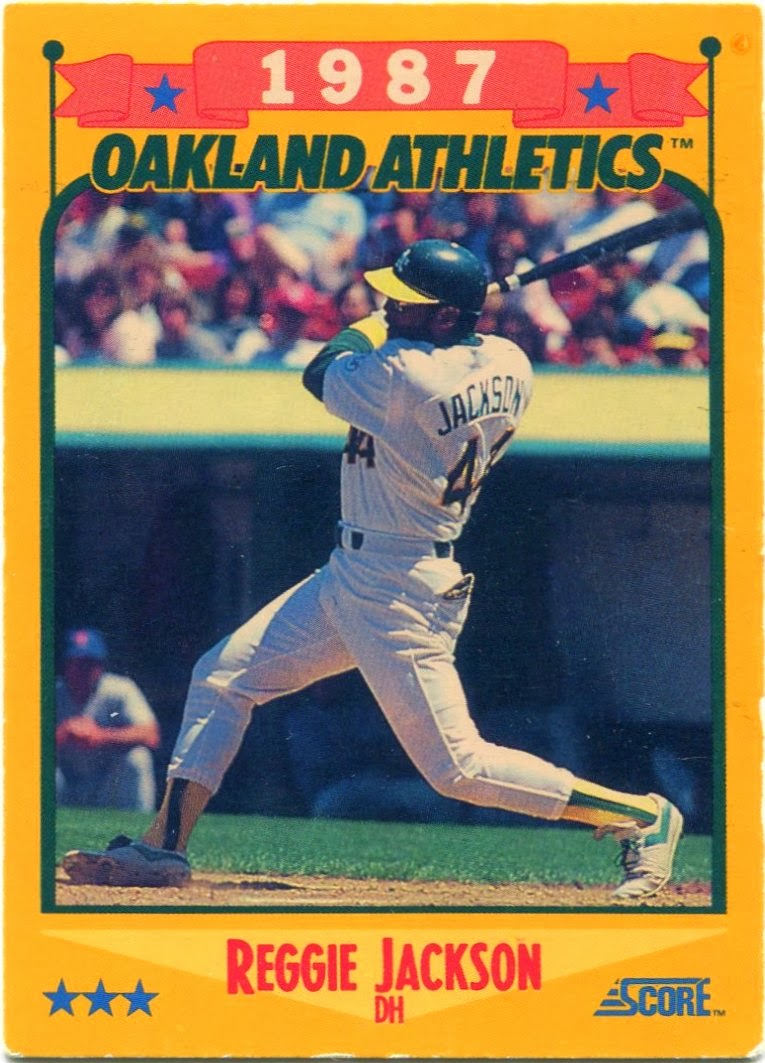 As if that weren't enough, the last piece of the subset doubles as a true "sunset" card.

The other four have fairly long paragraphs documenting each of Jackson's previous stops. 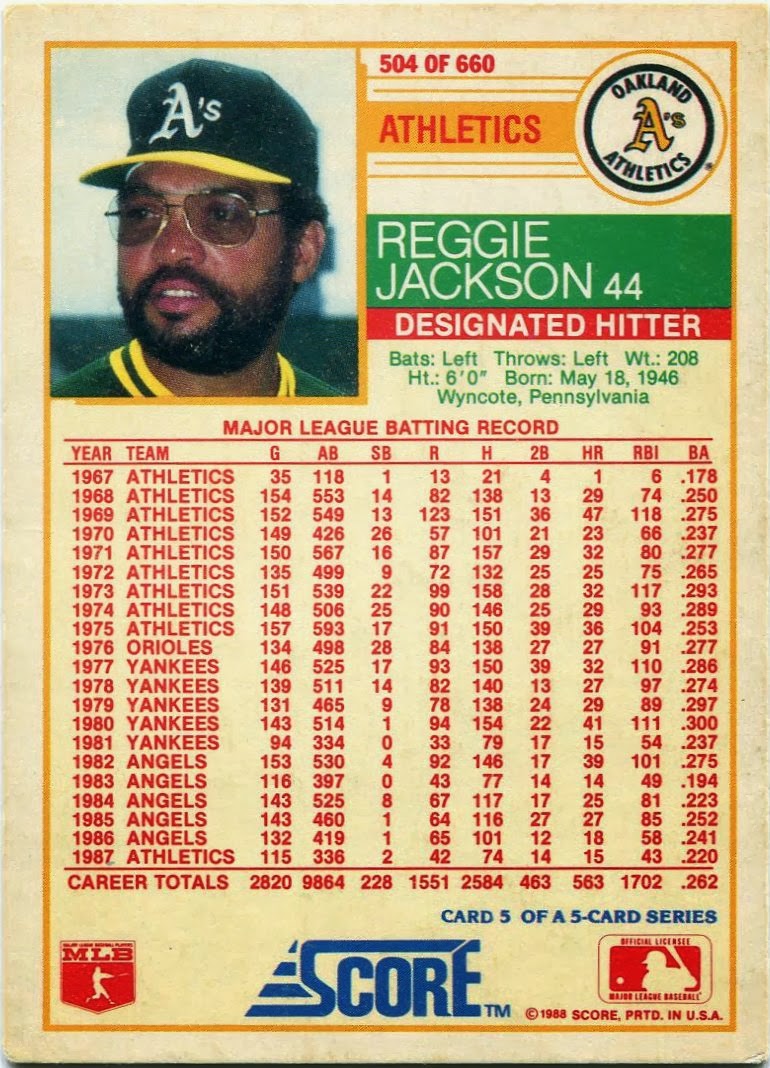 ...features full career stats on the back.

That's the number one indicator of a true cardboard farewell.

I don't think there's much denying that Score did the greatest job of sending Reggie Jackson into the sunset.

I never realized before, but the photos on those Score cards kind of "animate" Reggie's swing.. in Baltimore he's laying into a pitch, and by the return to Oakland, he's well into his follow-through. Pretty cool. Wonder if they did that on purpose.

I'm not sure why... but I really like the on deck shot of Reggie on his 87TT card. But you're right it doesn't compare to the 88S subset cards. I never knew Reggie played on the Orioles until I pulled that card out of a pack back in 1988.