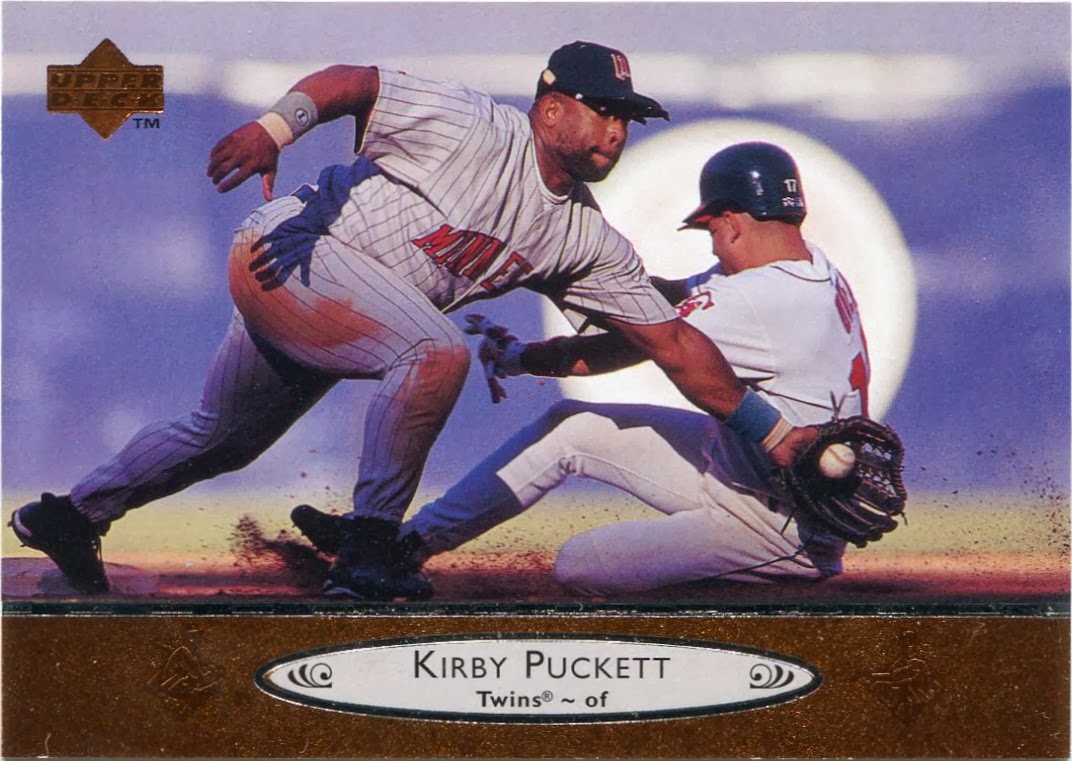 I doubt I'm the only collector who separates their cards by team.

I've heard of quite a few others that do the same thing. I've always felt that all franchises are deserving of their time in the spotlight, so my collection has been organized by team for as long as I can remember.

From there, though, it starts to get interesting. After I divvy all my cards into their necessary squads, the next step is to sort them by position.

Though other collectors may do this as well, I've never met one. Each of my team binders features pitchers, catchers, first basemen, second basemen, shortstops, third baseman, outfielders, DHs, and team/combo cards, in that order.

I'm still not exactly sure why I sort by position, but I like it. I find it neat to have Mark Grace, Derrek Lee, Bill Buckner, and Anthony Rizzo placed one after another in my Cubs binder.

Still, like any sorting method, problems are bound to arise. If you've been in the hobby for a while, you might have already noticed that card companies have a tendency to mismatch positions at times.

I'm pretty sure Upper Deck was just trying to be cute by featuring a photo of Kirby Puckett playing the infield in their 1996 checklist. Though the "OF" designation is still there, the Twins legend appears to be manning second base here in what turned out to be quite a crazy ballgame.

Upper Deck saw an opportunity to deviate from the norm and took it.

Seeing as how fascinating this card is, I'm sure glad they did. 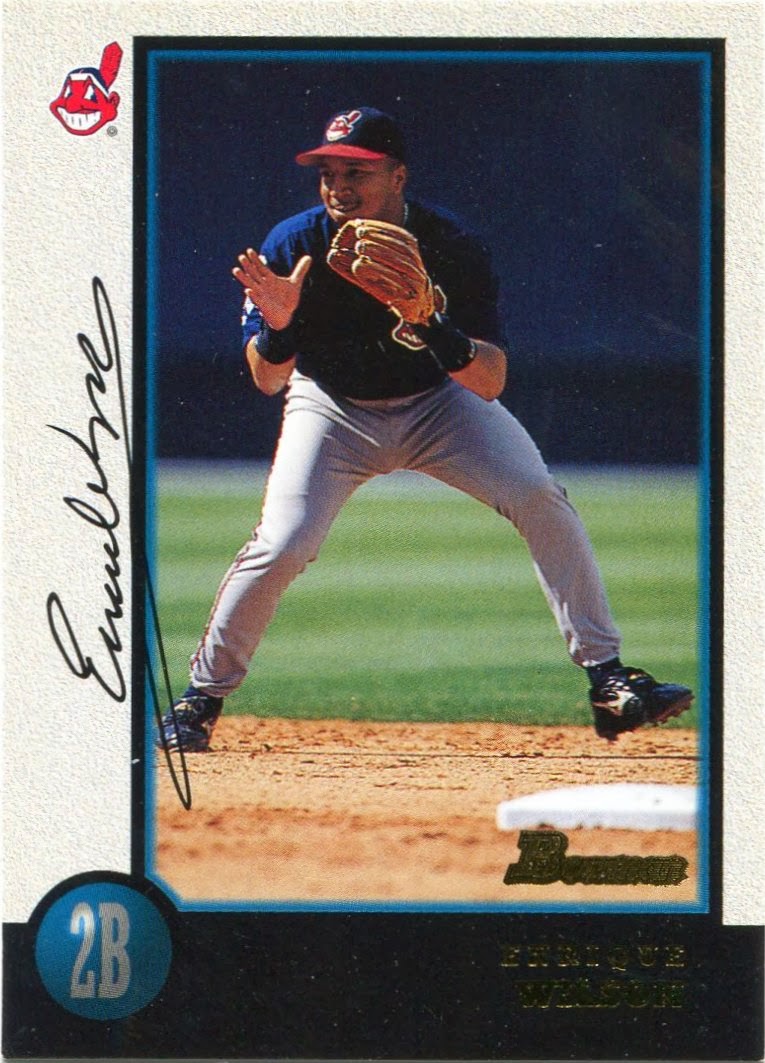 The majority of the time, however, card companies can be just plain lazy when it comes to this sort of thing.

Sometimes, the photo used doesn't match the listed position. You can see where this could create some drama for a position-minded collector such as myself.

For the record, the photo trumps the designated position in my collection.

As an example, Enrique Wilson's 1998 Bowman issue lists him as a second baseman. It sure looks like he's playing shortstop to me, though.

The middle infielder mistake is probably the most common mismatch I've seen.

I'm not sure if card companies know the difference between second base and shortstop. 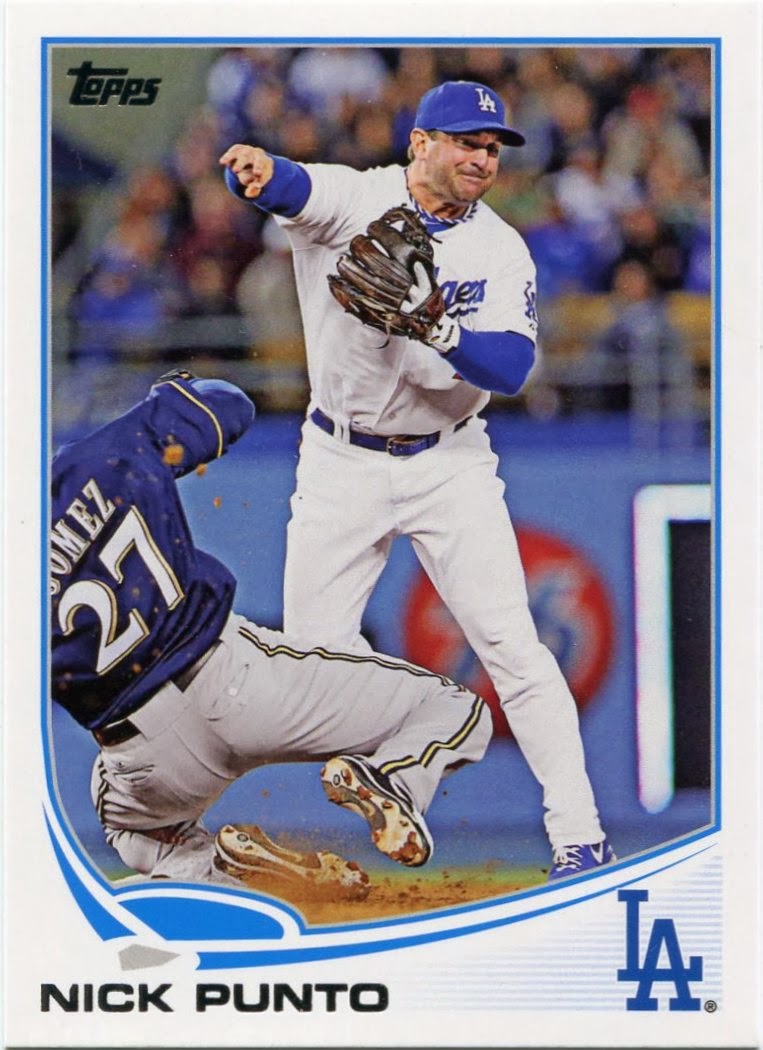 In what will likely turn out to be Nick Punto's only non-super-duper SP Dodger issue, the little infielder is shown turning a nifty double play on this card. 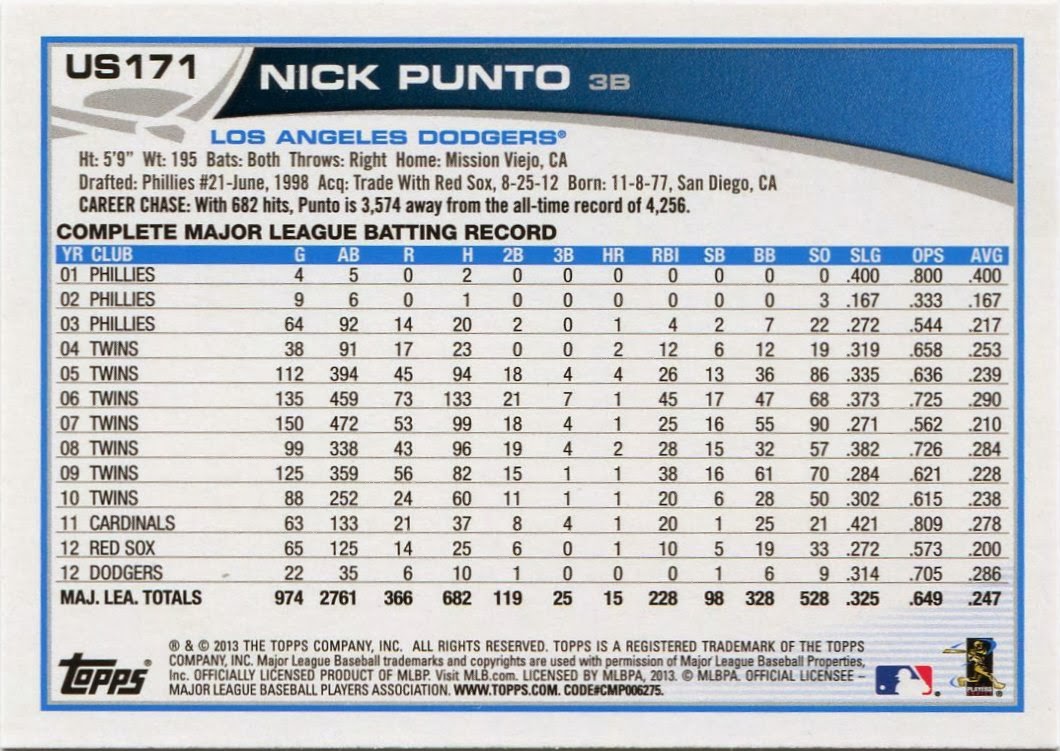 Topps listed him as a third baseman on the back.

Punto played almost twice the amount of innings at shortstop than third base with the Dodgers, mixing in a little time at second as well.

Even more than that, he's certainly not playing third in that shot.

He goes into the Dodger binder as a shortstop.

No thanks to Topps. 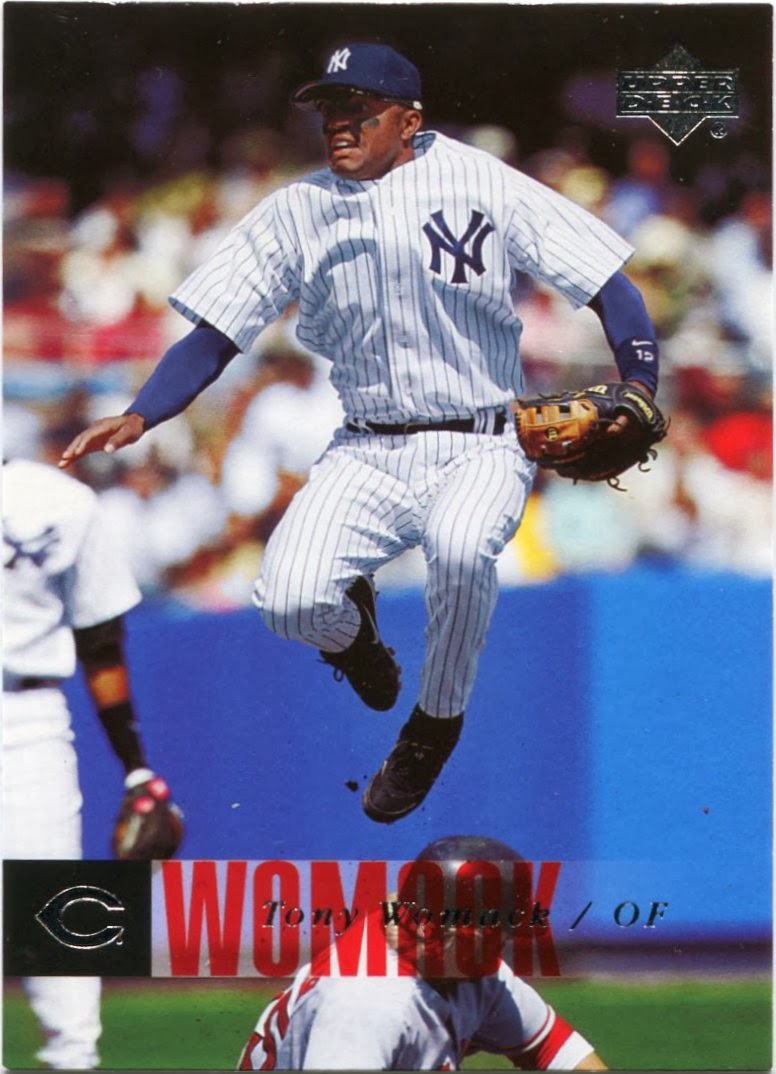 Mismatches aren't just relegated to the infield, though.

In yet another great "double dip" shot, Tony Womack is clearly playing second base here. Yet, for whatever reason, Upper Deck chose to label him as an outfielder.

Going even further, UD also pictured Womack as a Yankee, yet listed him as a Red.

It's a rare "double mismatch" combo. 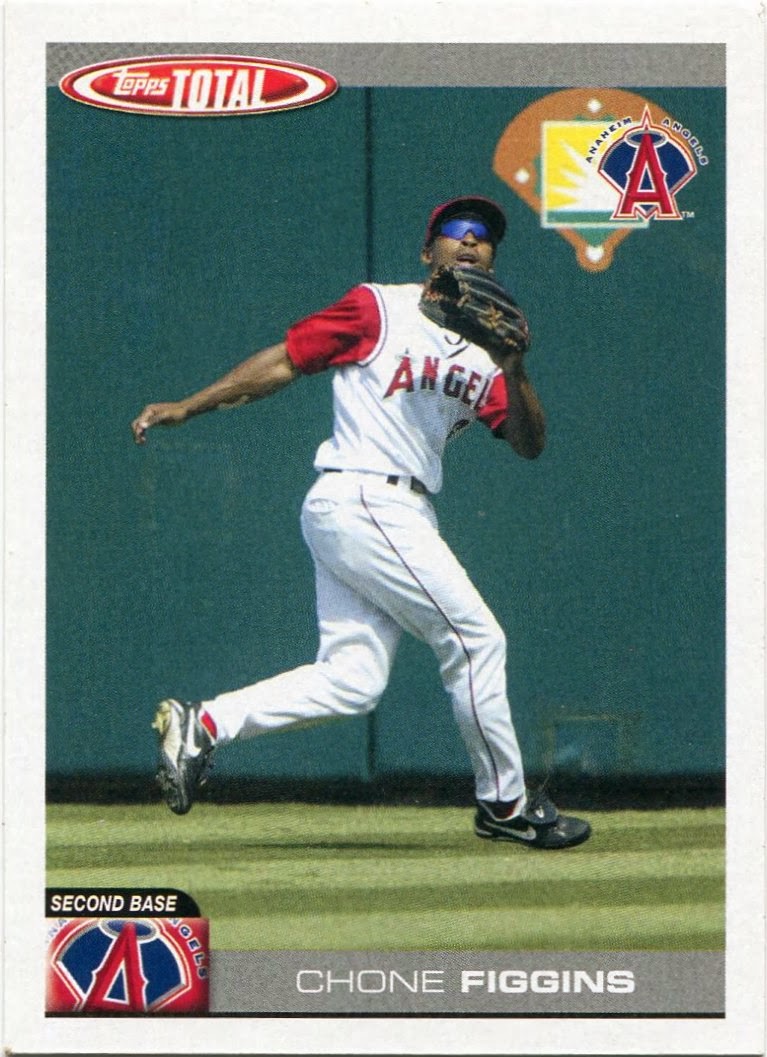 The inverse of Mr. Womack can be true as well.

Topps Total clearly used a shot of utility man Chone Figgins patrolling the outfield in 2004, yet listed him as a second baseman.

Guys like Figgins wreak havoc on my position-based sorting methods. I have cards that list him at second, third, and outfield. However, the majority of my Figgins cards feature him at third, so under the third base section he goes.

Still, it doesn't help when companies like Topps Total try to screw things up even more. 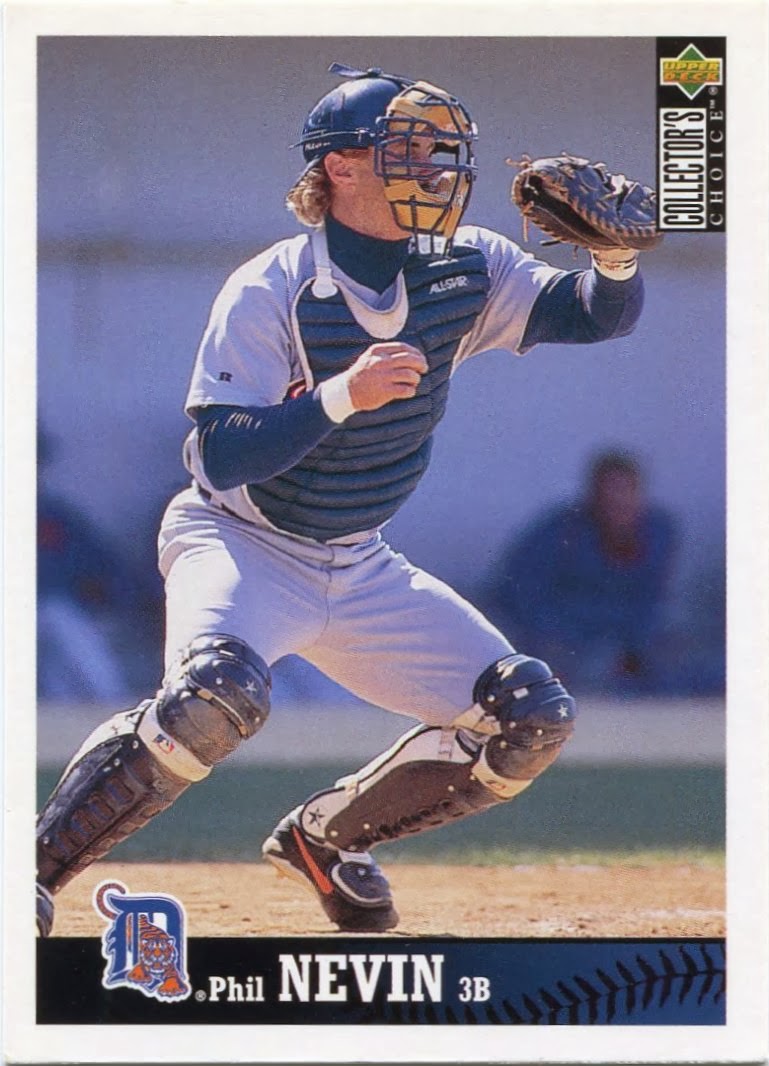 Here's a rare one in the world of position mismatches.

Phil Nevin caught a grand total of five games in two-plus seasons with the Tigers. The quirky minds at Collector's Choice, however, used a photo of him donning the "tools of ignorance" for this card.

Even more confusing is the fact that Nevin mainly played the outfield during his time in Detroit, sprinkling in a time at little third base along the way.

This card doesn't even acknowledge that. Nor does it recognize this shot of Nevin behind the plate. Nope, Collector's Choice simply slapped the "3B" label next to his name.

I don't know about you, but I would've liked to have seen a "C-3B-OF" designation.

I doubt that's ever been done before in the world of baseball cards. 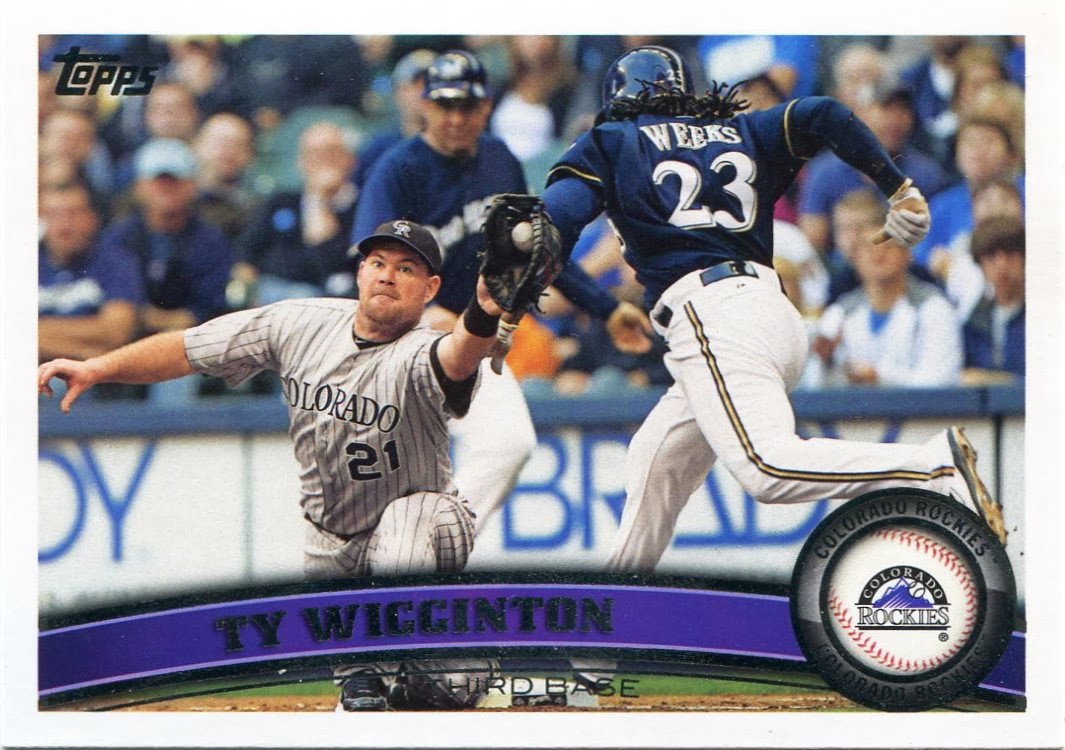 First base has seen its fair share of position mishaps.

This is probably one of my favorite cards from the terrific 2011 Topps checklist. Horizontal, action-filled, and just great all around. It's the perfect baseball card.

Though the big stretch is a first base trademark, Topps listed Ty Wigginton as a third baseman here. 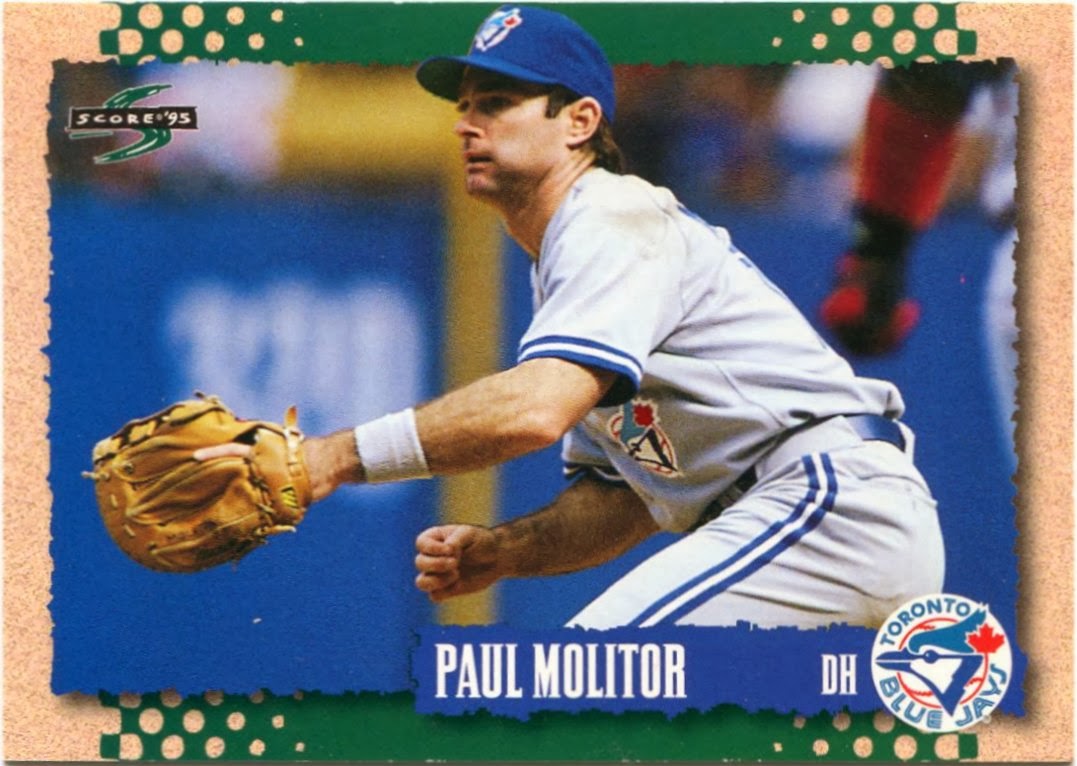 This is the type of mismatch that bugs me the most, though.

For the record, I'm all for the abolishment of the designated hitter. Pitchers should have to go up to the plate just like everyone else.

At this point, however, I've come to accept that the DH is a part of the game. It's just how it is.

Even someone who doesn't know a thing about baseball can probably infer that the job of a designated hitter is to hit. That's literally all they do. No glove necessary.

That's why it drives me absolutely bonkers when companies list a guy as a DH, yet show him fielding.

I'm sure Paul Molitor was a fine first baseman. But if you're going to list him as a DH, then I don't want to see him with a glove.

Cards of designated hitters should feature them, you know, hitting. 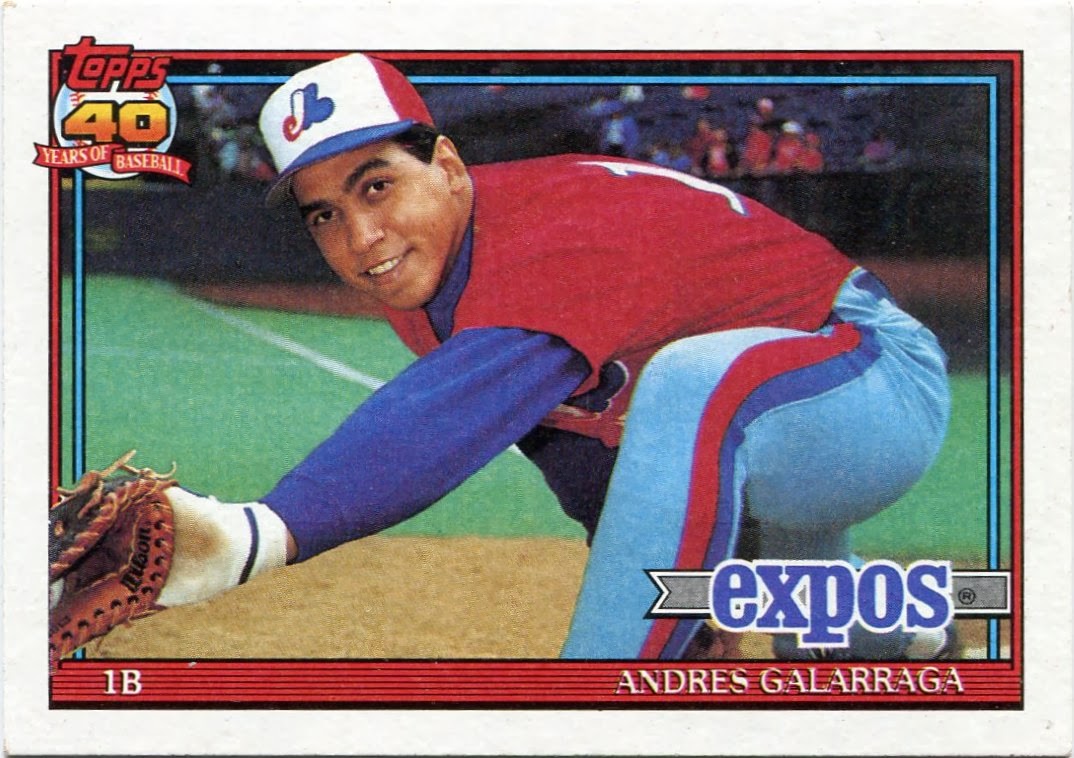 Andres Galarraga was a gifted first baseman. Topps listed him as such here. And, better yet, they actually snapped a photo of him playing first base.

If companies are going to list a guy at a position, then they should show him playing that position. Doing so would help both myself and my position-based collection keep our sanity.

I don't think it's too much to ask.

I think the position(s) should be where the player played the most that season. If the photo doesn't match, that is a little annoying. However it would be more annoying to me to see Ty Wigginton listed as a first baseman despite him playing third base almost 400 more innings that year.

That being said, that Twins/Angels box score is crazy. I have always thought of Tom Kelly as a really good manager, but what was he thinking. Unless there was an injury. It appeared that Kelly as moving Puckett around the infield based on whether a lefty or righty was at the plate to lessen his impact.

I think that photo is from him playing shortstop. That appears to be Spike Owen sliding into second which happened when Rex Hudler laid down a bunt to the catcher and the catcher tried to get the runner at second, but Owen was called safe.

They should put every position played the previous year. Then Campaneris' 1966 card would say 'Bert Campaneris P/C/1B/2B/SS/3B/LF/CF/RF' which would be excellent.

Awesome post. It's these types of posts that make you one of the elite bloggers (along with the legendary NO). I can't imagine the amount of time it took to find all of these cards. You guys should be writing for Beckett... wait do they still have magazines? Whatever. You guys should start your own sports card magazine. I know I'd buy a subscription.

My Rockies binder is also sorted by position, I had to give up on the 2B/SS thing and change mine to 1B followed by middle infielders and then 3B. Any other conflicts go to the position I remember them playing most.

Figgins used to be fairly valuable in Fantasy Baseball due to that versatility. Wreaks havoc on your binders, but always nice to have when a freak injury occurs at a thin position.

Great post! I've actually never even noticed this type of thing before. Yet another new collecting aspect thanks to you Nick!