Dreaming of the '70s 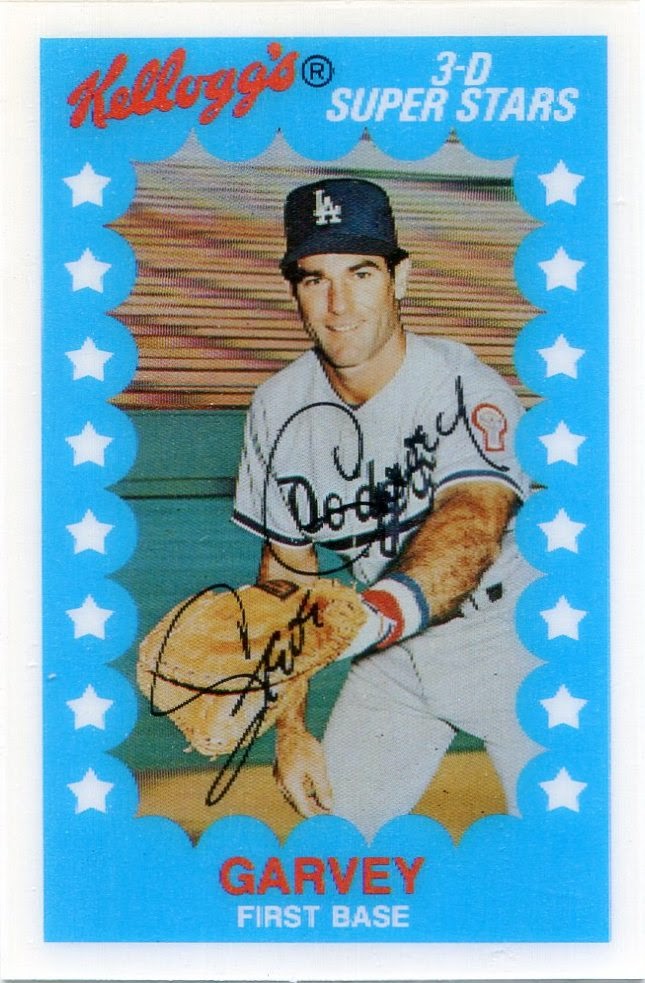 One of the reasons I sometimes think this way is because of the music. If you haven't noticed from some of my past remarks, I'm not a big fan of today's tunes. I know the music of the '70s wasn't perfect, but a lot of my favorite bands did come out of the era.

Another reason for my '70s nostalgia should be pretty obvious.

It seems like every corner store on the planet had baseball cards in the '70s. There weren't any super short-prints or color variations to worry about, either. Heck, baseball cards literally fell out of cereal boxes back then.

Greg of the ever-popular "Night Owl Cards" grew up during that era. And I'm sure he went through his fair share of cereal to get his hands on some of those famous Kellogg's cards. I know he's still a big fan of them to this day, which is why I included one in a recent trade package I sent his way.

Well, Greg graciously returned the favor by throwing (what I assume was) a spare Kellogg's Steve Garvey into his latest batch of cardboard awesomeness. Though I'm far from the only blogger who collects "Mr. Clean", he's always had a special place in my collection.

This terrific Kellogg's issue is one of the better Kellogg's cards I've seen. 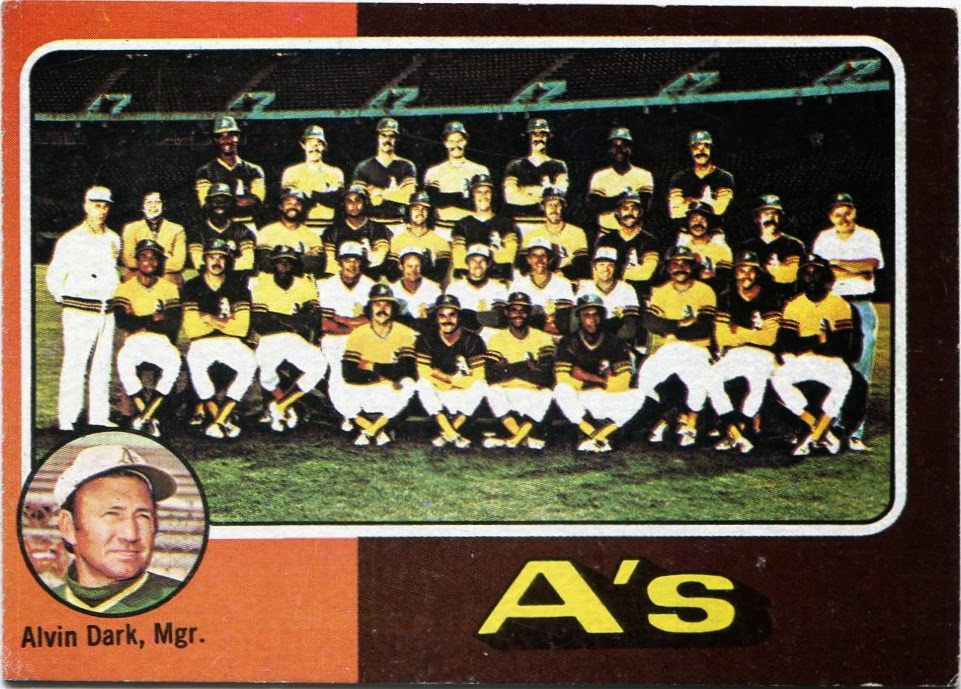 Of course, a package from Greg wouldn't be complete without some MMIIIINNNIIIIISSSS!!!

In case you've been hiding under a rock somewhere, Mr. Owl is on a mission (from God?) to complete the '75 mini set.

From what I've read, these were regionally distributed. My dad, who collected during the '70s, said he didn't even know about these until I started picking up a few here and there in recent years.

I know from Greg's blog, though, that he bought quite a few packs of them as a kid. In today's mini-saturated world, these colorful '75s really stand out.

I can see why they're so special to him. 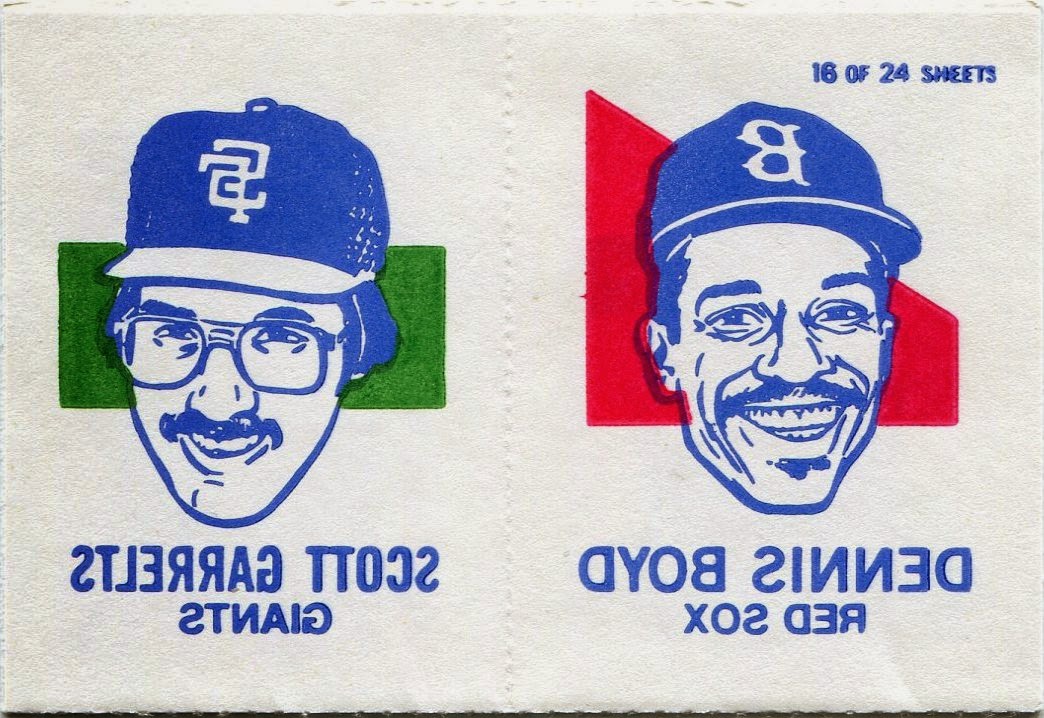 That's not to say that the '80s didn't have its highlights, though.

Issued in 1986, this is the very first Topps Tattoo I can say I own. I don't know much about Scott Garrelts, but "Oil Can" Boyd has always been one of my main men.

Plus, you know how easily I'm swayed by the world of oddballs. 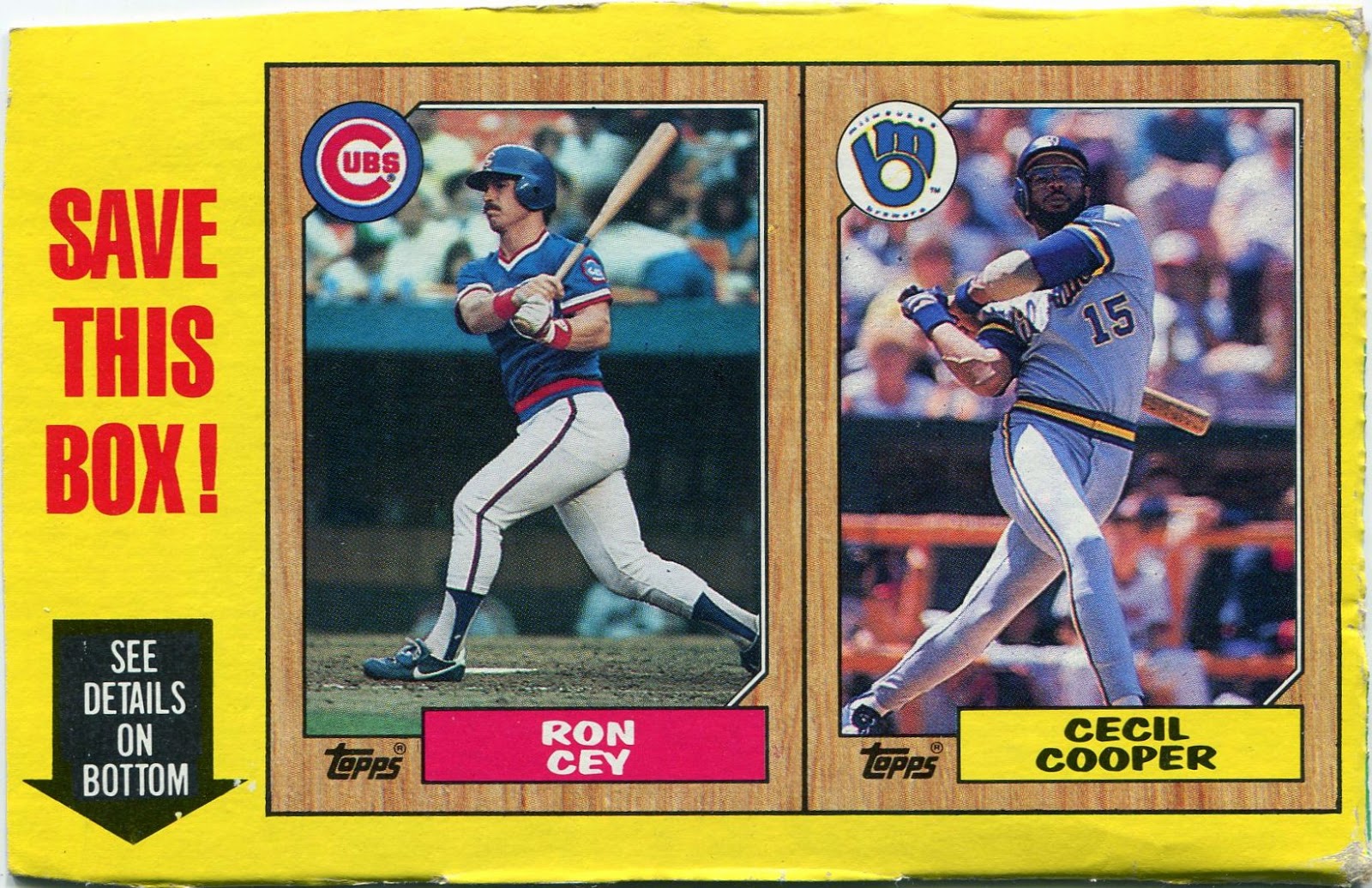 In what is probably a spare from his "Penguin" collection, Mr. Owl decided to pass this sweet uncut Topps box bottom onto me. I know Greg doesn't look to fondly on Cey's years with the Cubs.

Or the Cubs at all, for that matter. 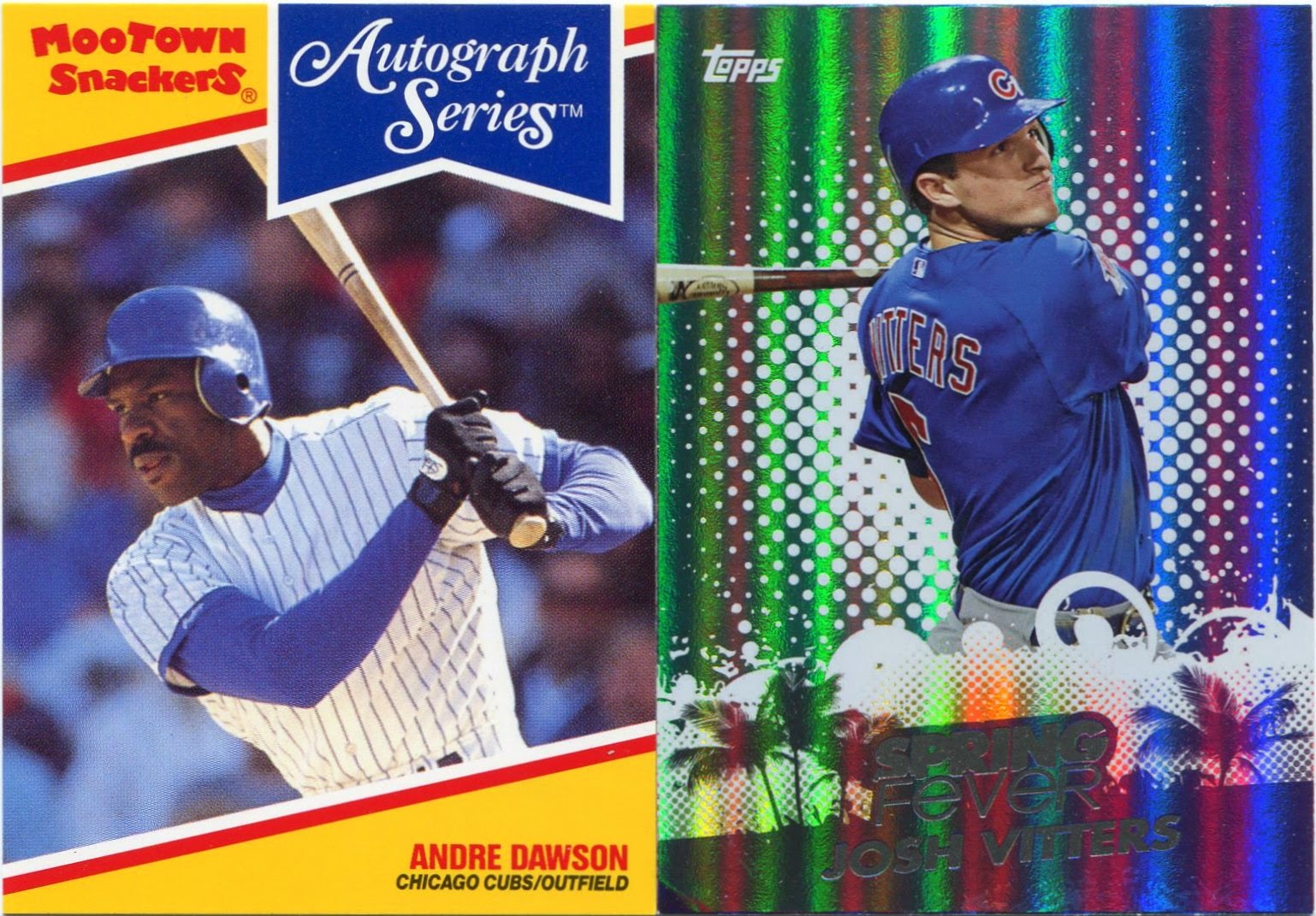 As long as he still finds neat Cubbies to send my way, though, it's all good.

Andre Dawson is one of the better outfielders in the history of the Windy City. Josh Vitters, on the other hand, appears to have fallen off the face of the Earth after a disastrous call-up in 2012.

That aside, both of these oddities are terrific adds to my Cubs binders. 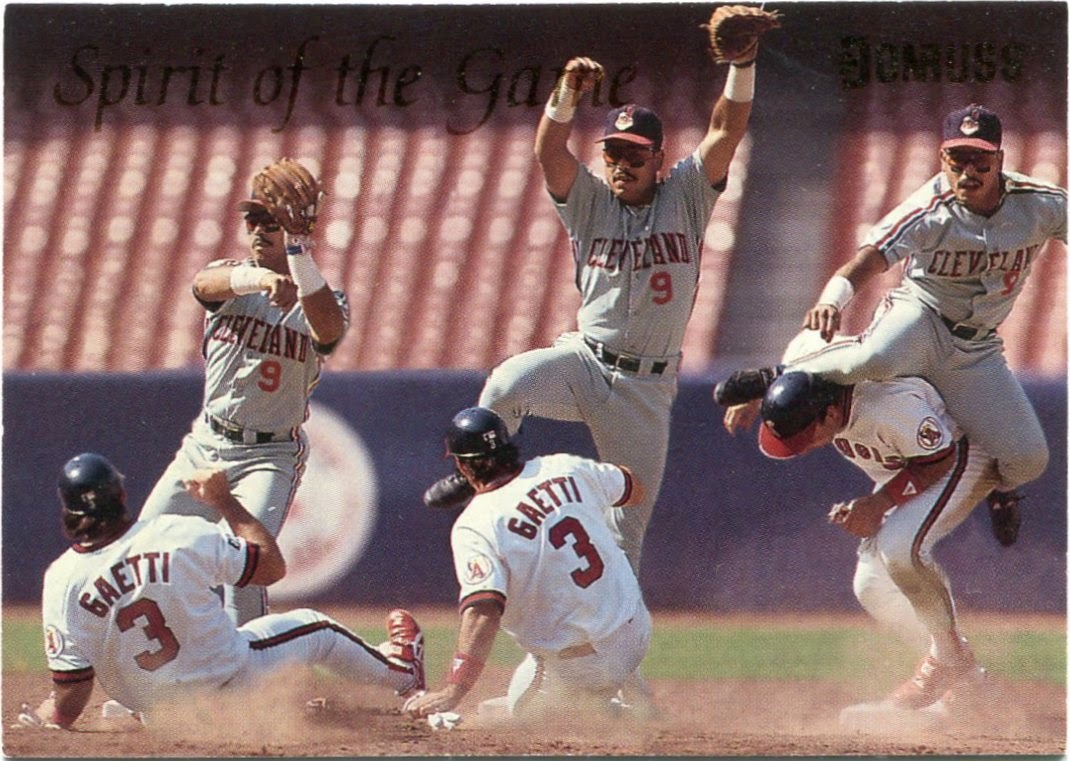 Though I know he's a big oddball guy, Greg slipped a few more mainstream issues into this package as well.

Seen above is a tremendous hit to both my "double dip" and "multiple-exposure" mini-collections. In fact, I'm pretty sure these shots were taken just a few frames before the one seen on Carlos Baerga's 1993 Upper Deck issue.

It's one of my favorites from the '93 UD checklist, which is saying something. 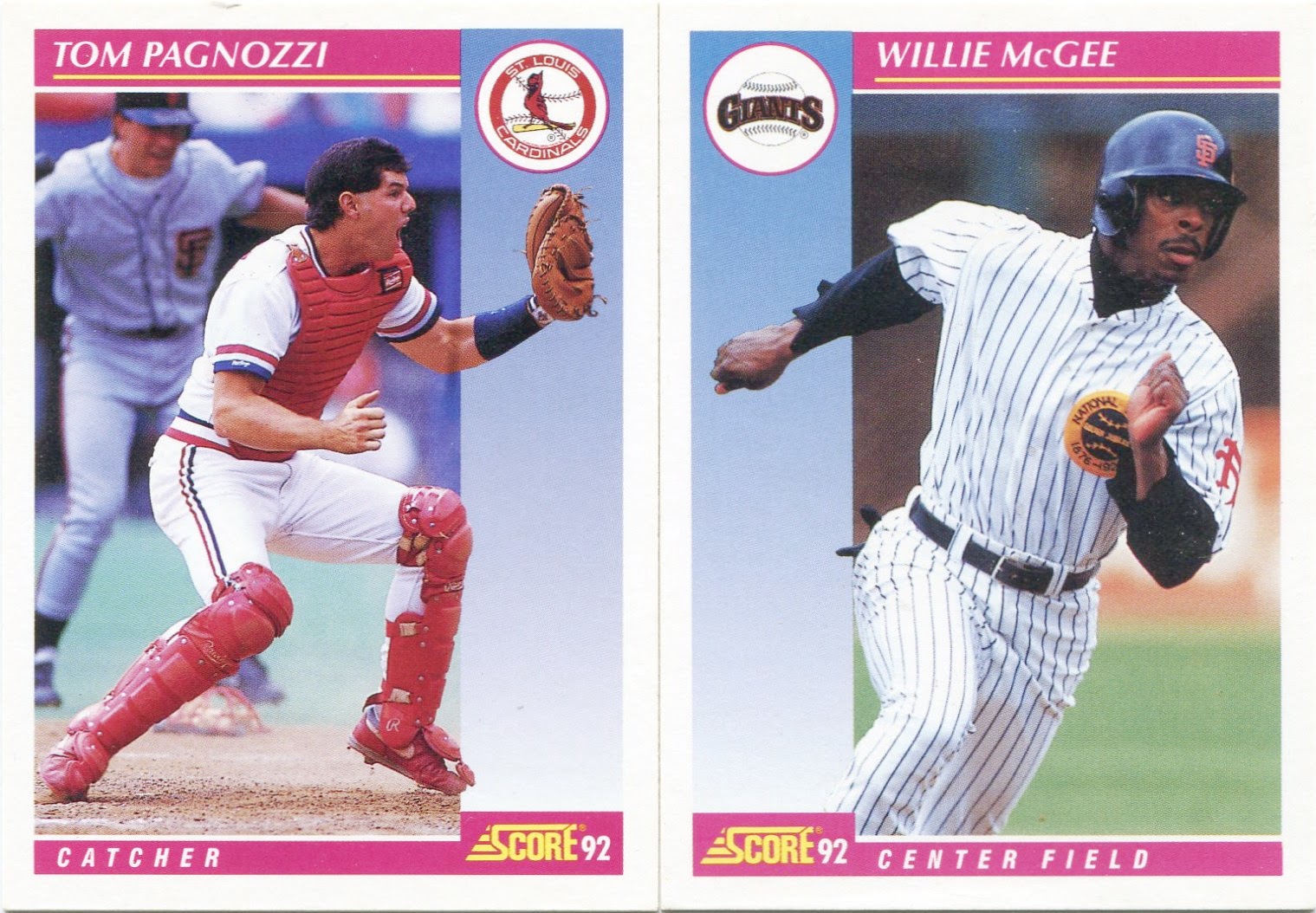 I know Mr. Owl doesn't much care for 1992 Score, but these are a couple terrific cards.

From what I've seen, Tom Pagnozzi was one intense dude. 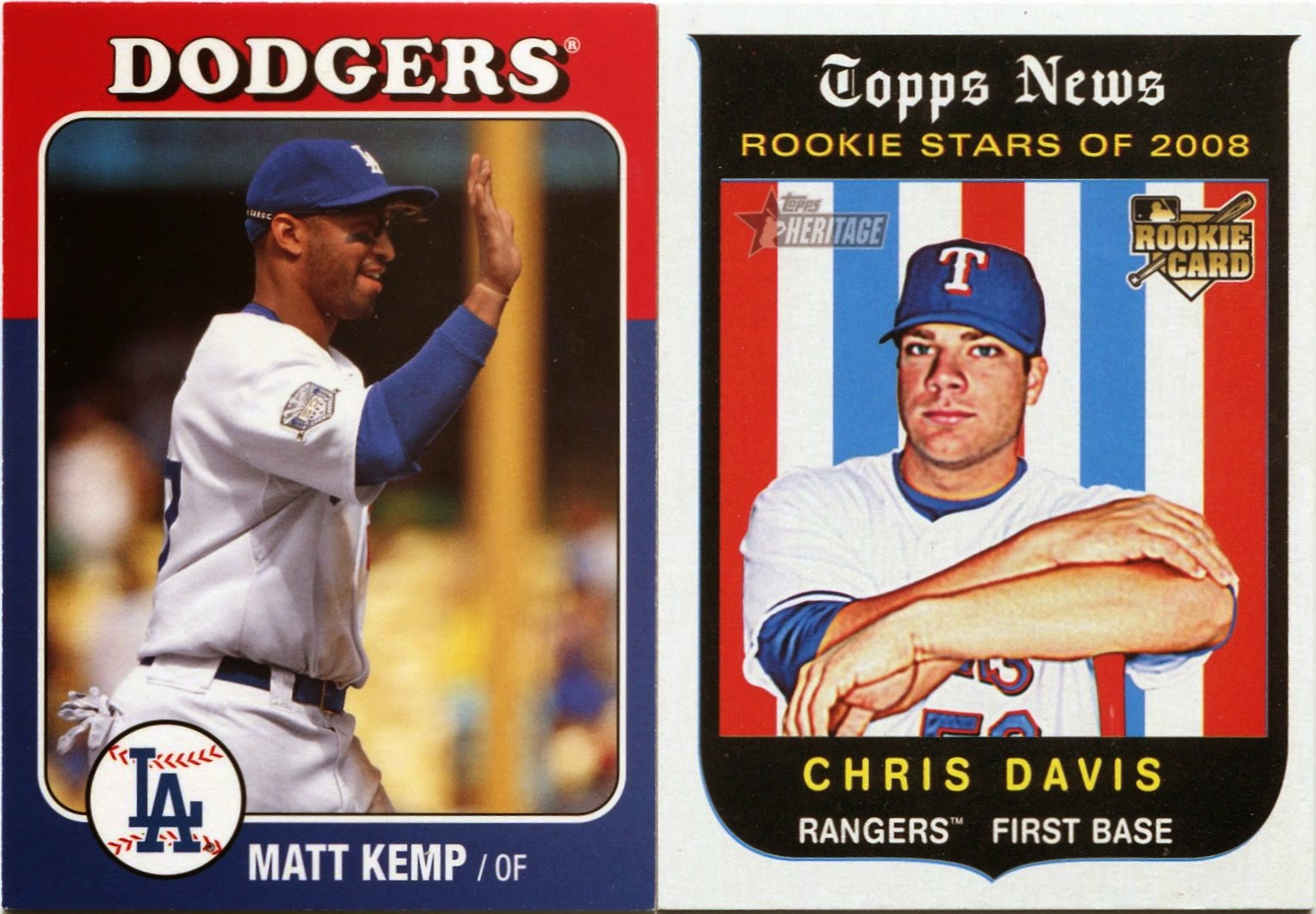 Greg was also kind enough to throw in some hits to a couple of my newer player collections.

Again, I know I'm not the only Matt Kemp fan in the blogosphere.

My hope is that all the Dodger bloggers accumulate enough extras to make my collection of his somewhat formidable. 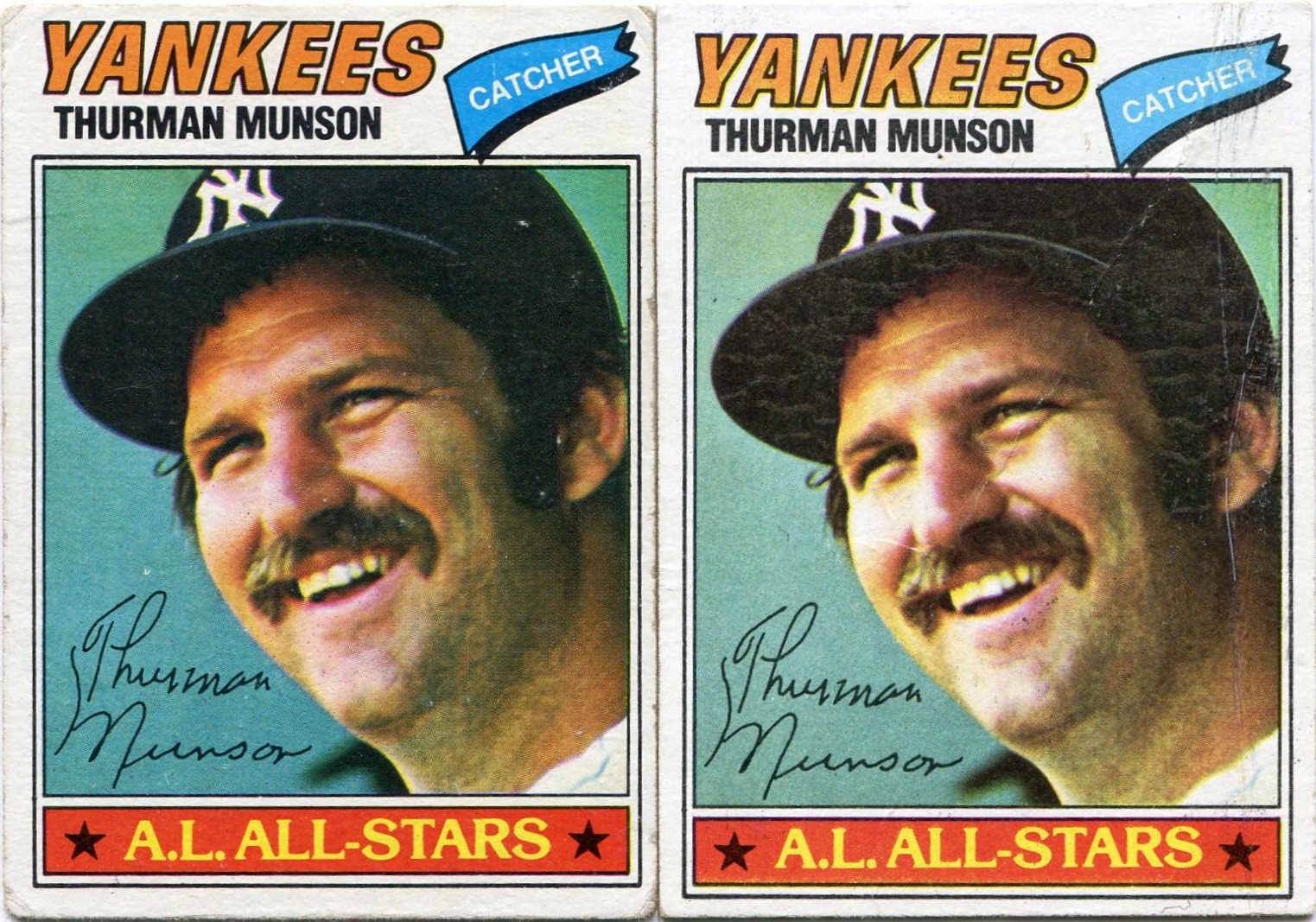 Among Greg's impressive set building accomplishments is his completion of '77 Topps.

I wasn't around during the '70s, but I have to believe that this Munson was one of the more famous cards from that set. It's always been one of my favorites.

Apparently, Greg decided to include one of his lesser-conditioned Munsons into this package. Interestingly, his cast-off (on the left) was actually an upgrade to the one I previously had in my collection (on the right).

Maybe my old copy will be an upgrade to someone else's collection.

It's a never-ending chain. 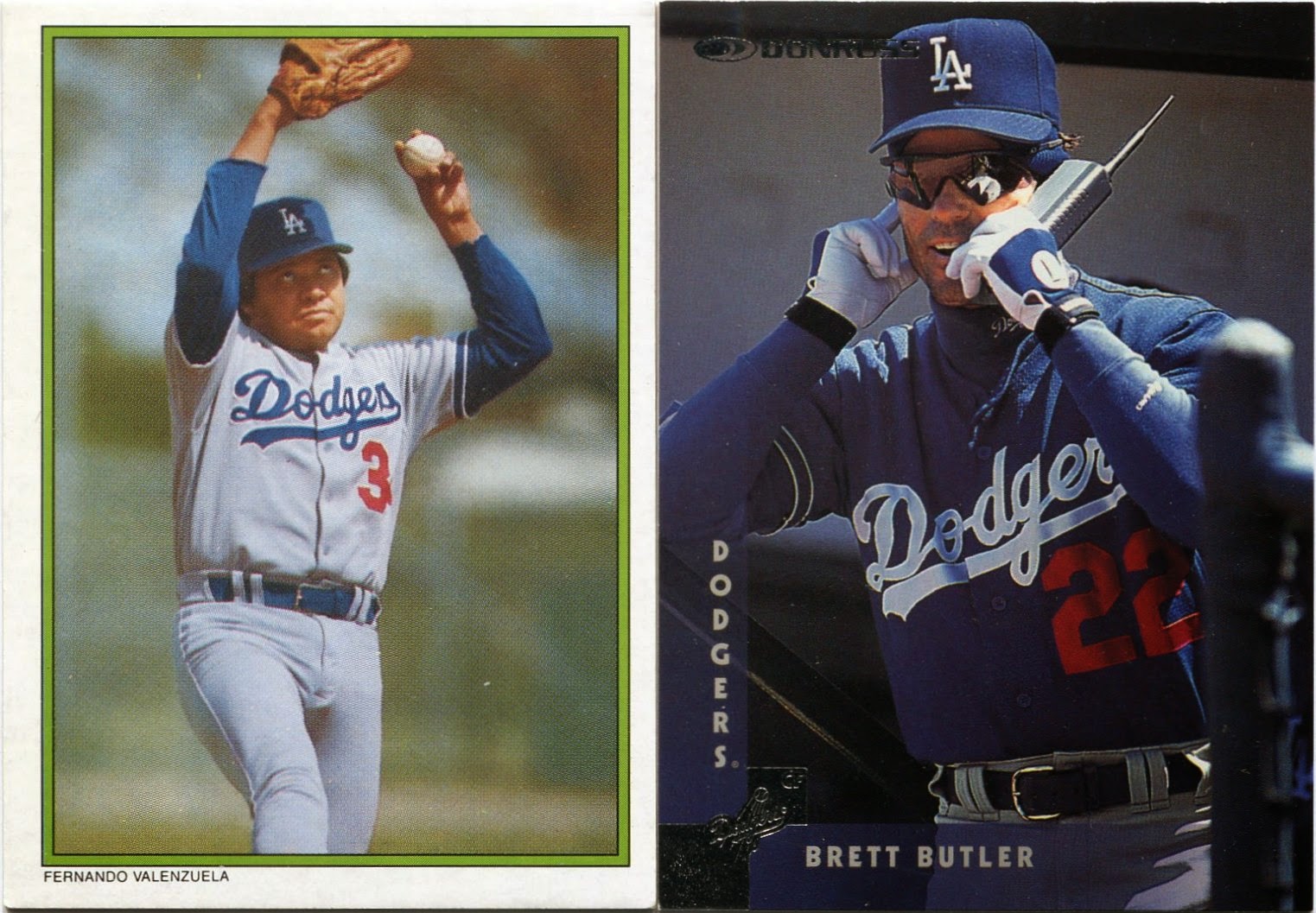 I guess a package from a hardcore Dodger collector wouldn't be complete without a few randoms of the men in blue.

I can see why so many companies used shots of Fernando Valenzuela's "eyes to the sky" windup. It's one of the more iconic images in baseball history, and I never tire of it.

What I'll never understand, however, is why there are so many of those cell phone-themed cards around. I've found way more than I ever could've imagined.

Though this was a largely '70s-themed trade package, those are about as '90s as it gets. 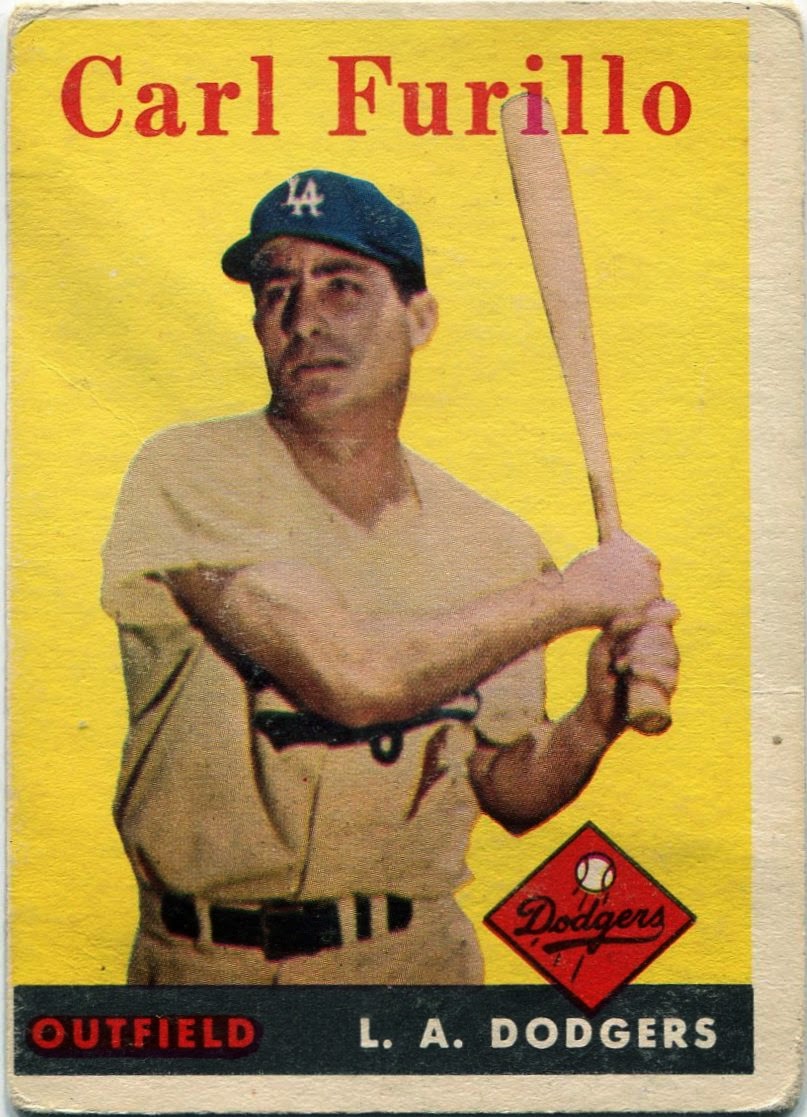 For possibly the best card Greg sent along, however, we have to go all the way back to the 1950's.

As evidenced by the airbrushed "L.A" on Carl Furillo's hat here, the Dodgers had just moved to Los Angeles by the time '58 Topps hit the streets. The move, of course, set off a dramatic westward expansion in baseball.

Seeing this card fall out of Mr. Owl's package was a pleasant surprise. Vintage is always fun, but the fact that I actually collect Carl Furillo made it all the more sweet.

He's one of those forgotten stars whose cards come relatively cheap these days, which is all the better for a budget-minded collector such as myself.

Still, I sure never thought I'd land one for free.

As long as great people like Greg are around, though, I guess I shouldn't be too surprised.

That's one of the things I love most about this hobby. While I may not have been around in the '70s, I can live through the tales of other collectors who actually grew up during the era.

It's part of what has kept me reading blogs for the past few years.

I seem to pick up a new piece of history with each passing day.
Posted by Nick at 1:30 PM

Scoonj! What's a young whipper snapper like you doing, collecting The Reading Rifle? I'm guessing you're the literary type who's actually read The Boys of Summer?

I will take the seventies cards any say over today's issues .nice package you received

Eating cereal must be so boring for kids today.

I haven't been to a card show since TwinsFest in 2011 and, I gotta tell ya, that card show was lame.

Damn that Garvey is gorgeous... so is the A's mini. I grew up in the 70's... but didn't start collecting baseball cards until the early 80's. But you're absolutely right... 70's rock is way better than most of the new stuff you hear on the radio.