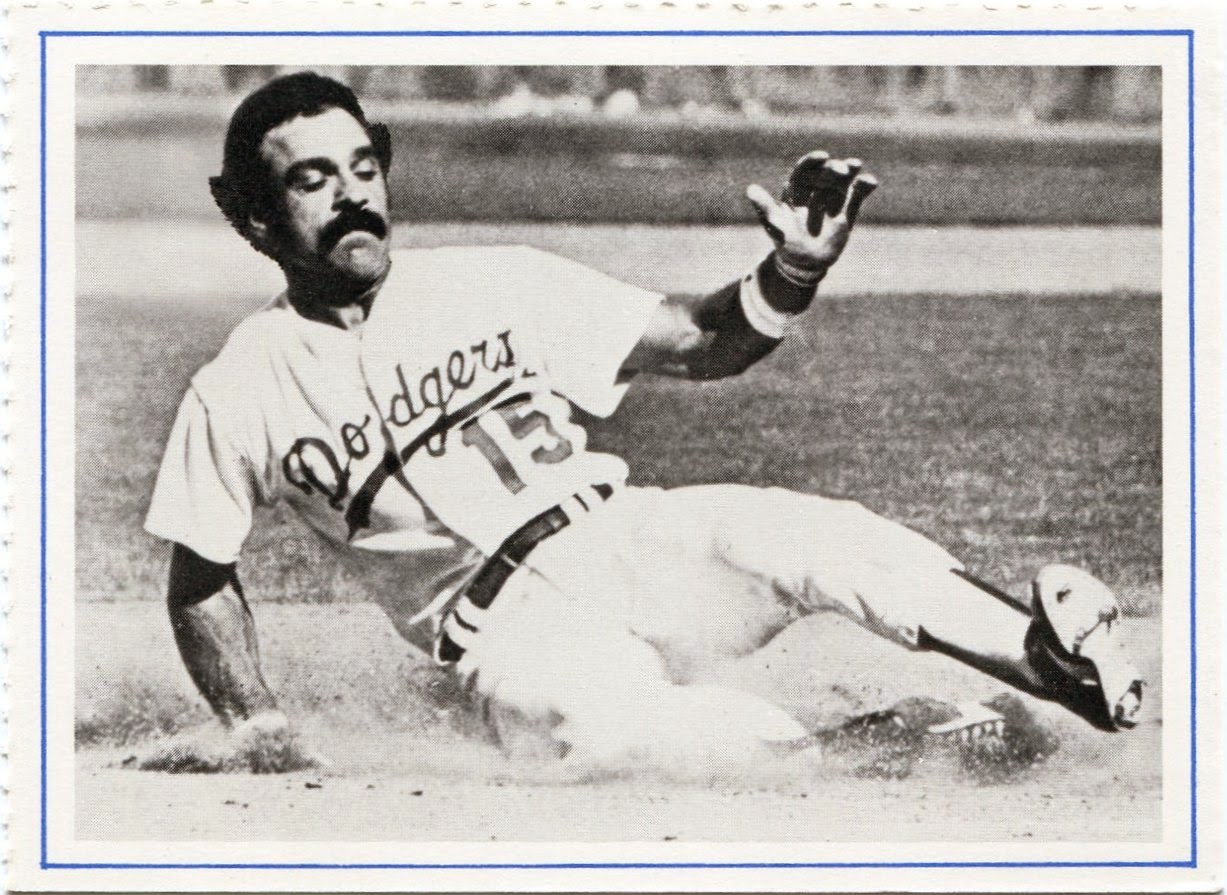 Normally, I don't like to do two consecutive trade posts on this blog.

However, the package I'm about to show off tonight has been sitting in my trade folder for far too long at this point. It's about time I unleashed this unbelievable amount of cardboard greatness onto all of you.

Through his readership, comments, and sheer generosity, reader Mark H. is quickly becoming a blogosphere MVP without yet having a blog of his own. You've probably already seen the amazing number of awesome trade packages he's sent to fellow collectors at this point.

I've been lucky enough to be a recipient of Mark's gift-giving ways on a couple of different occasions already.

So, when he contacted me about a package he was going to send for my birthday, I couldn't wait to see what he had in store. (My birthday was nearly a month ago, which tells you how behind I am with trade posts.)

Mark noted that this was going to be an oddball-filled batch. As I found, though, these weren't your everyday oddballs. I'd never before seen many of the ones he sent. The man quite literally reinvented my idea of oddballs.

Take that Davey Lopes at the top of the post. I have no idea how, when, or where it was released. It's somewhat reminiscent of a postcard, and it features a terrific action shot of the former Dodger.

A lot of the time, the best oddballs are the ones that are the most mysterious. 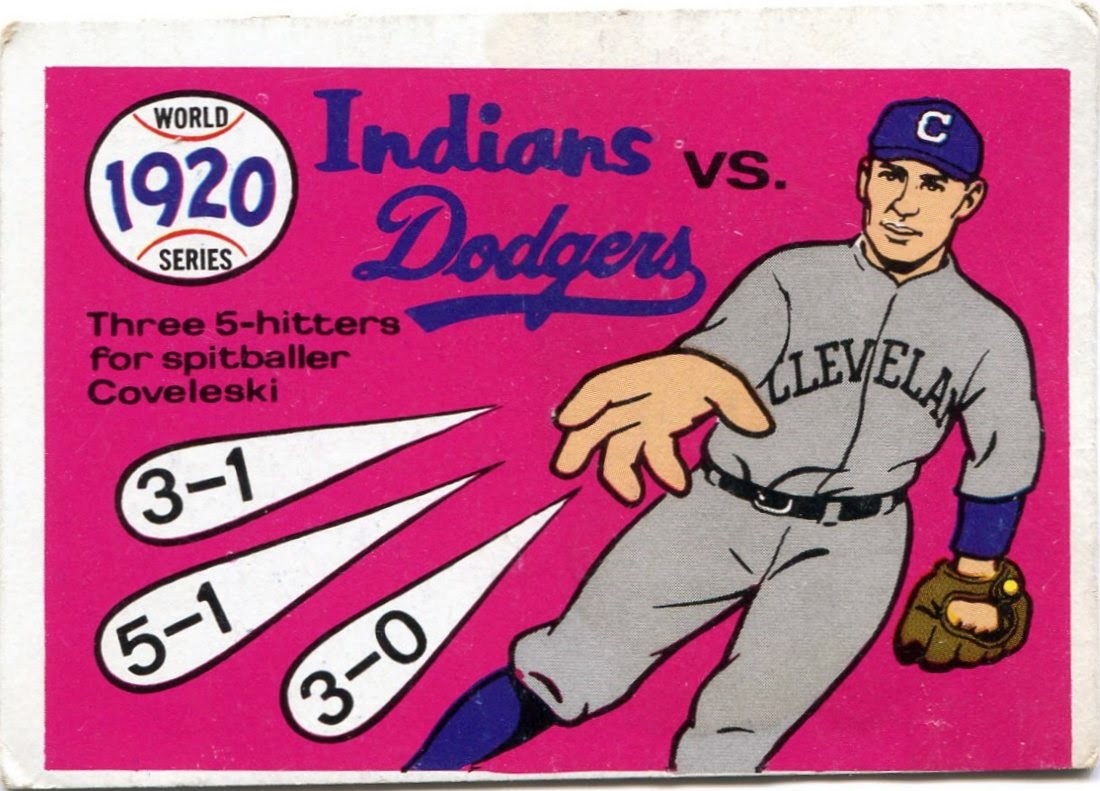 I actually knew the history behind this one.

That proved to be pretty rare when it came to unveiling the finds from this package.

This cartoonish piece hails from the 1968 Fleer World Series checklist, one of Fleer's final releases before their grand return to the hobby in 1981.

I'd have to go back and check, but I don't think I've ever seen the word "spitballer" on the front of a baseball card before. 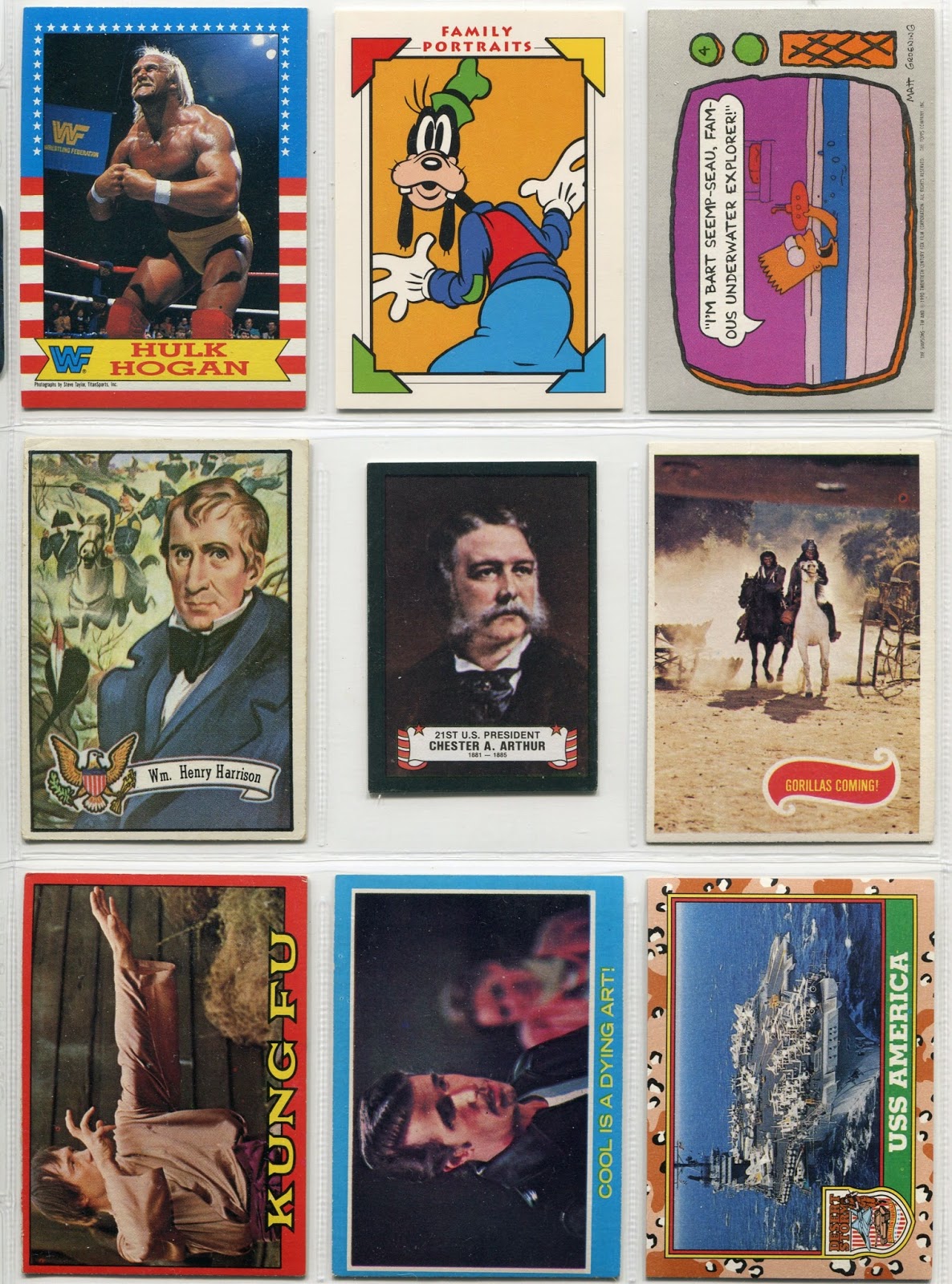 Just look at all this glorious randomness.

Presidents, wrestling, The Simpsons, Planet of the Apes, Happy Days... 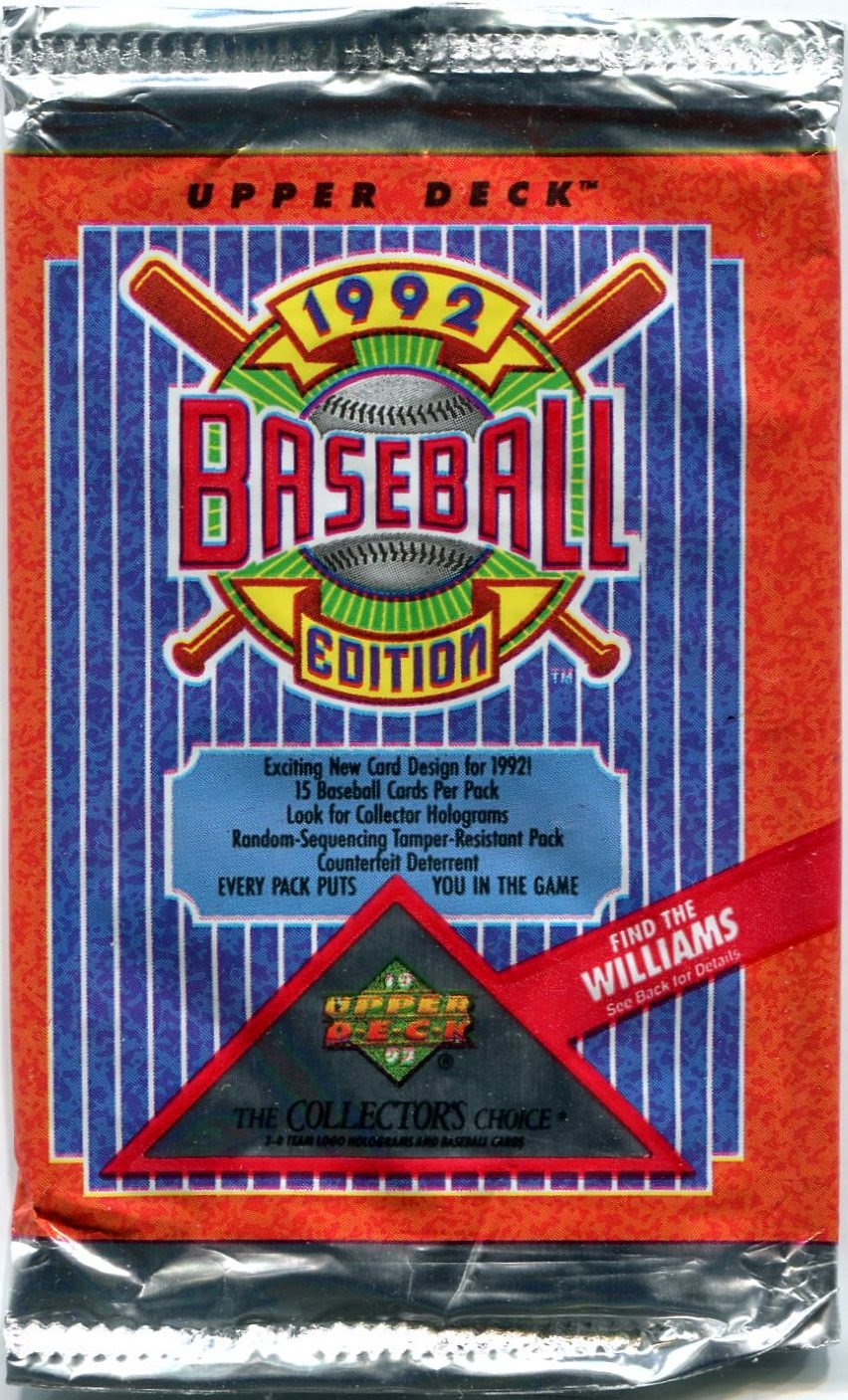 Mark even managed to turn something as common as 1992 Upper Deck into an oddball.

By sending me an unopened pack of the stuff. I was born on February 19th of '92, so I have to imagine that these were released right around the time I came into this world.

That made opening this 22-year-old pack exponentially more fun. 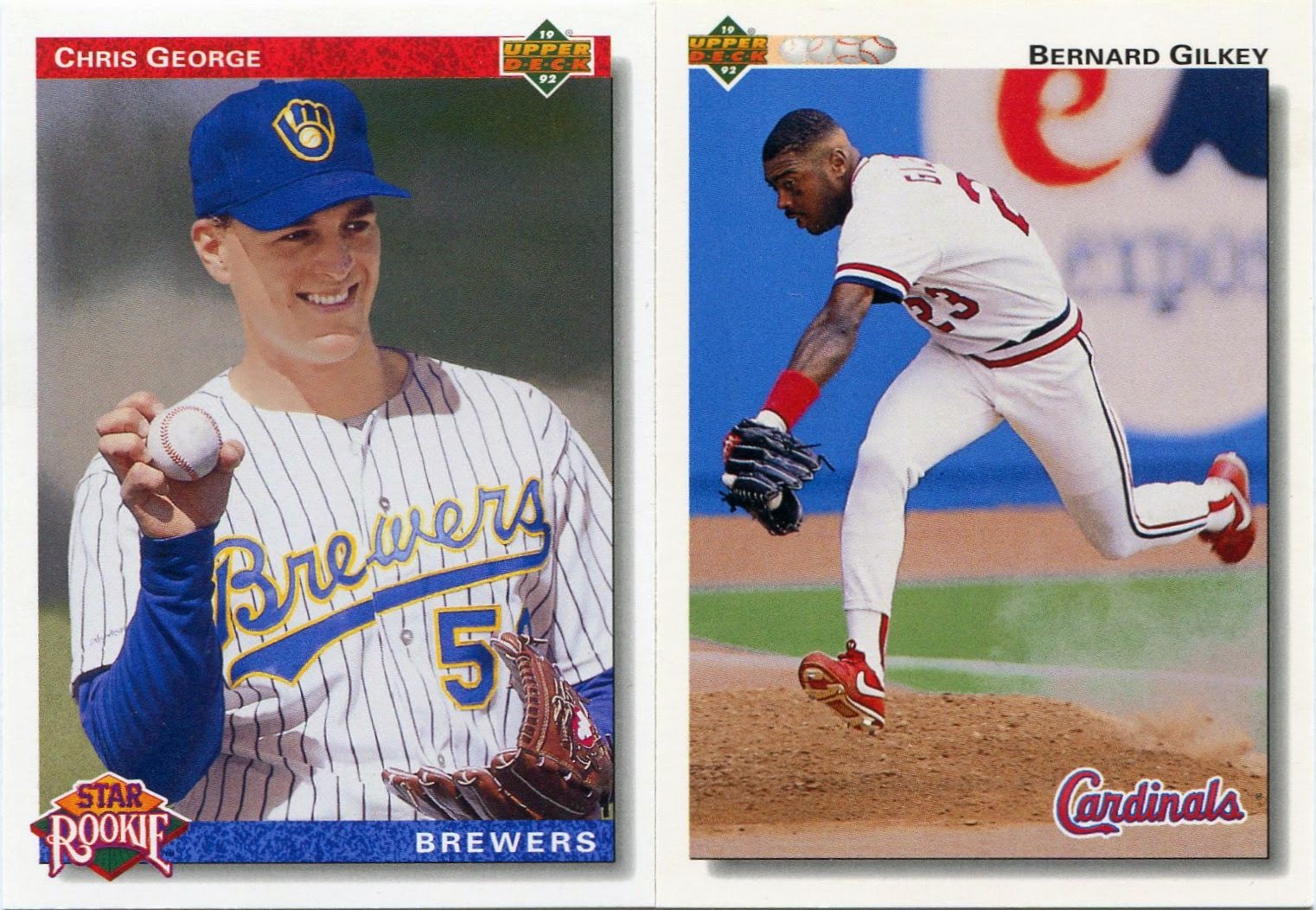 No matter the era, you're bound to pull at least a couple fun cards from a pack of Upper Deck.

I particularly enjoyed these two of Chris George goofing around with a knuckleball and Bernard Gilkey bolting across a bullpen mound.

And, yes, I saved the wrapper. I collect those things.

Don't call me a pack rat.

I prefer the term "accumulator". 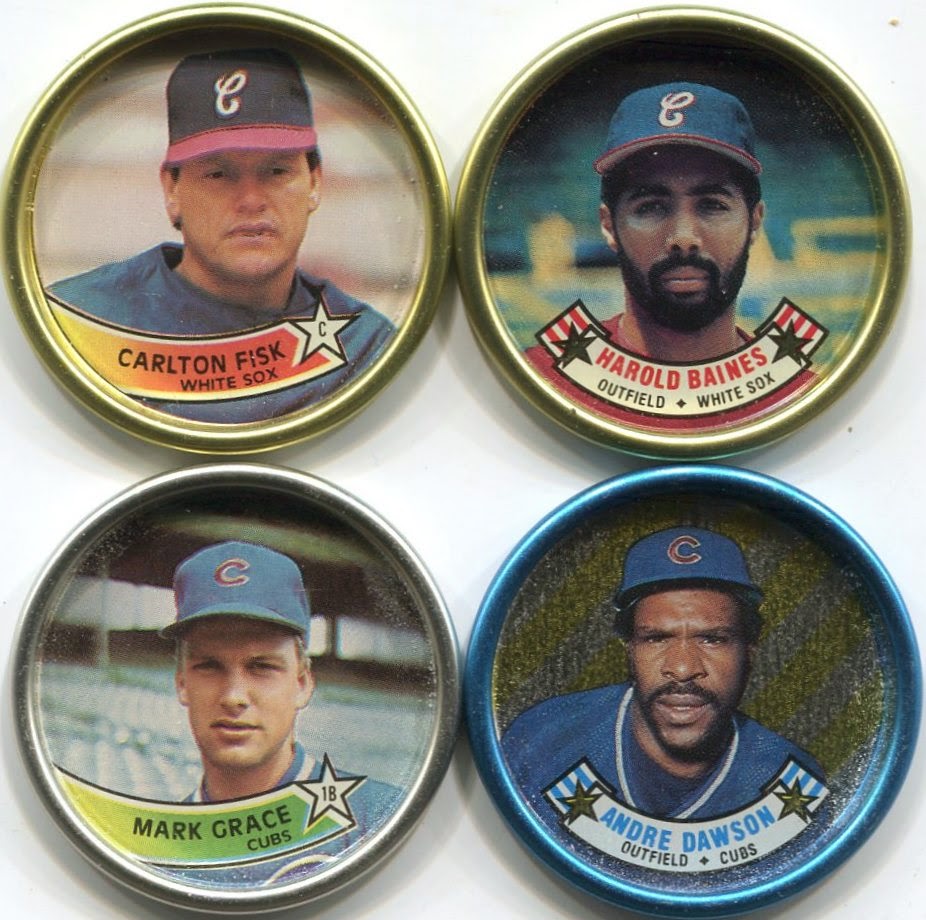 Coinage was also present in this wonderful trade package.

Mark was nice enough to throw in a few Cubs and Sox Topps coins into this assortment.

Though they don't fit into a binder, I still think they're neat. 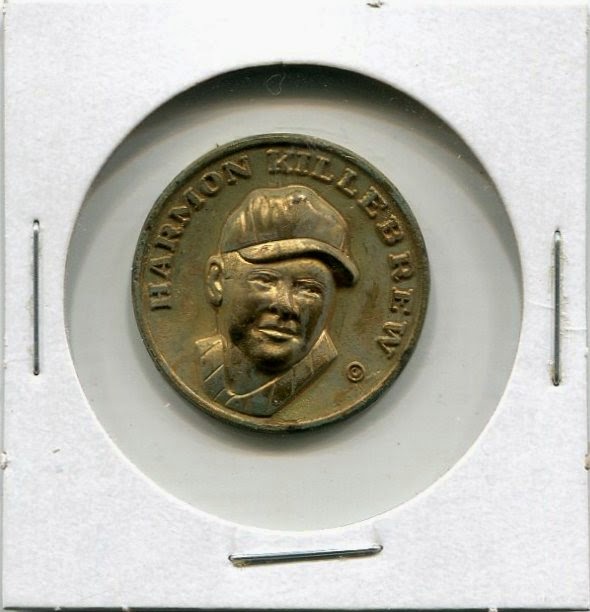 As far as coins go, though, this one stole the show.

Mark clued me into the specific details of a lot of the oddballs he sent. Had he not told me, I probably would've never found out that this spectacular Harmon Killebrew piece comes from the 1969 Citgo Coins release.

I can't begin to tell you how cool this thing is. 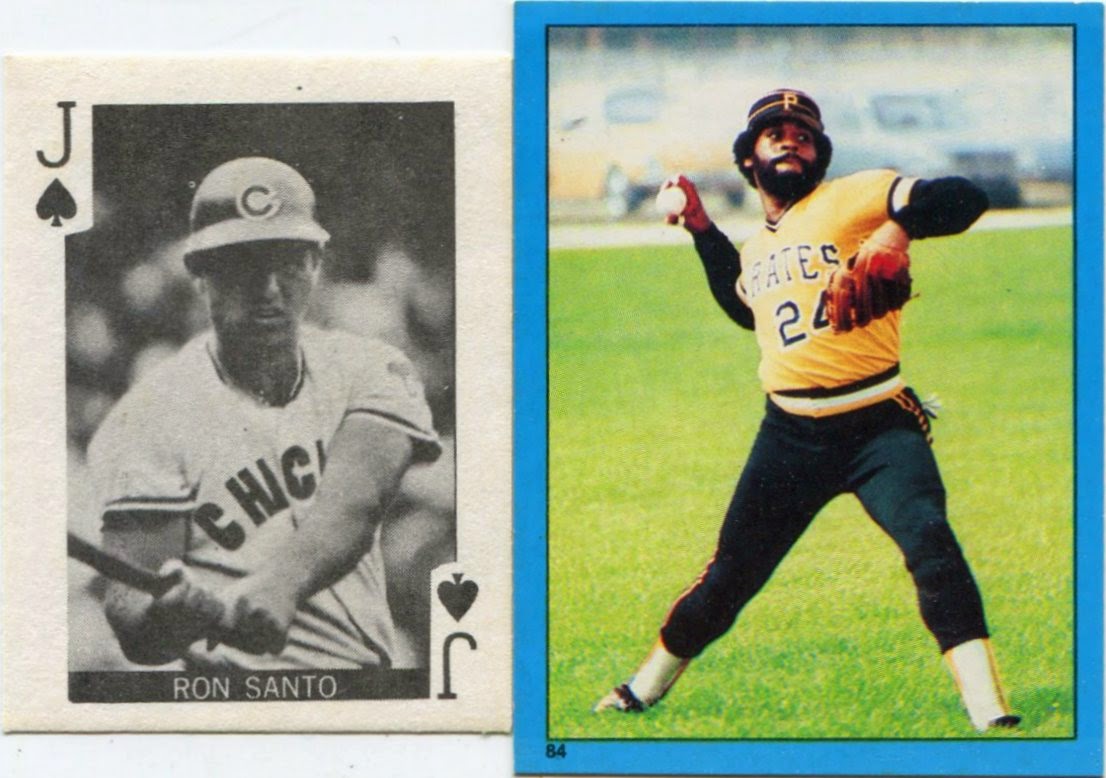 Let's take a look at a couple more bite-sized oddballs.

If you've ever held one of those 1980's Topps Stickers in your hand before, you probably already know how small they are. Mark struck gold by sending along the Mike Easler, a favorite of both mine and my dad.

That, then, should tell you how microscopic that Santo is. According to Mark, it's part of the 1969 Globe Imports set. Like the Killebrew coin, it was distributed at gas stations.

The Cubs may not have had the best luck in 1969, but I'm still fond of the Santo nonetheless. 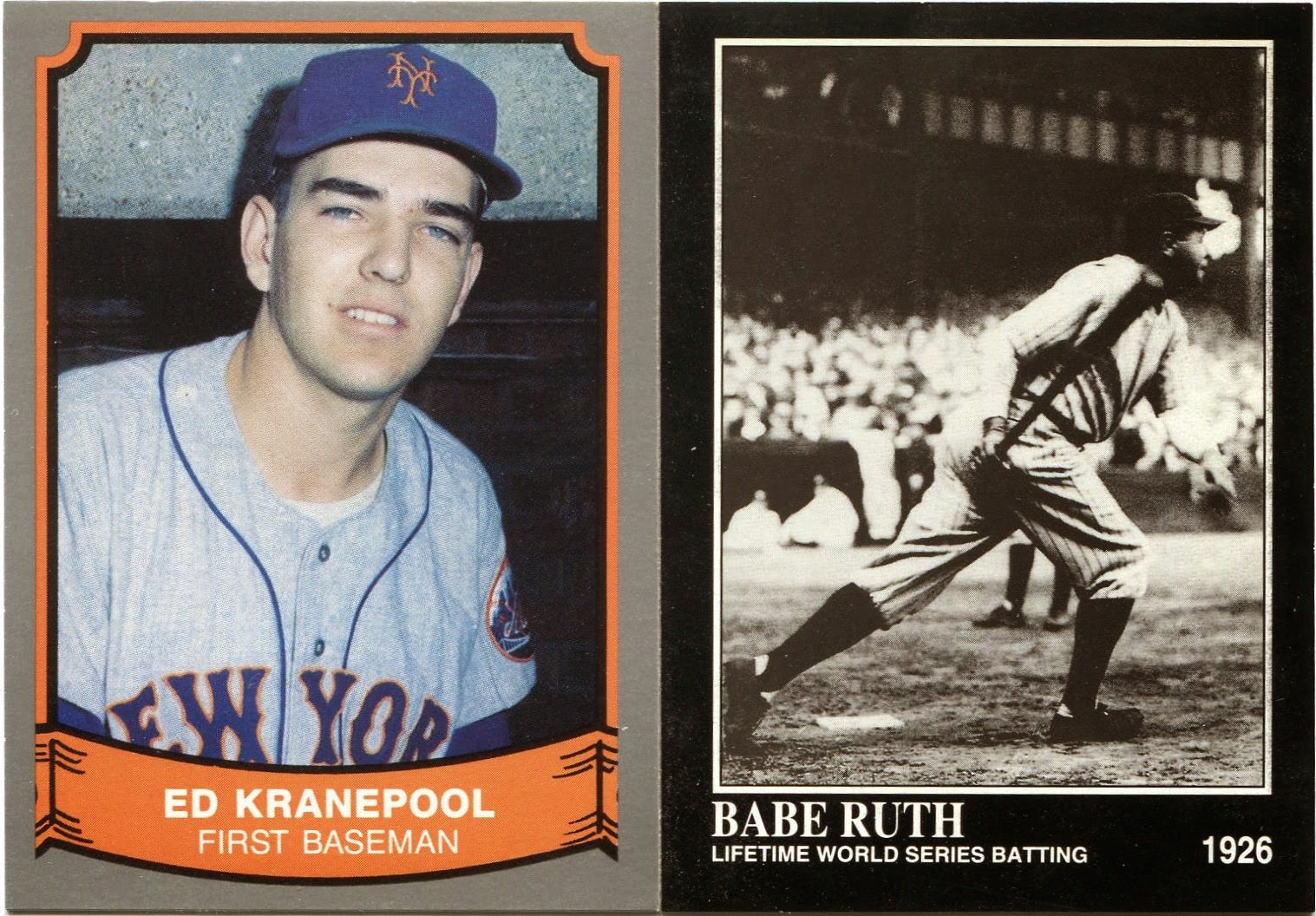 Though relatively common, I still tend to think of sets like Pacific Legends and Conlon Babe Ruth as oddballs.

That doesn't take anything away from these two. Both of these beauties were new to me. In a lot of other trade packages, they would've stolen the show.

But not this one. 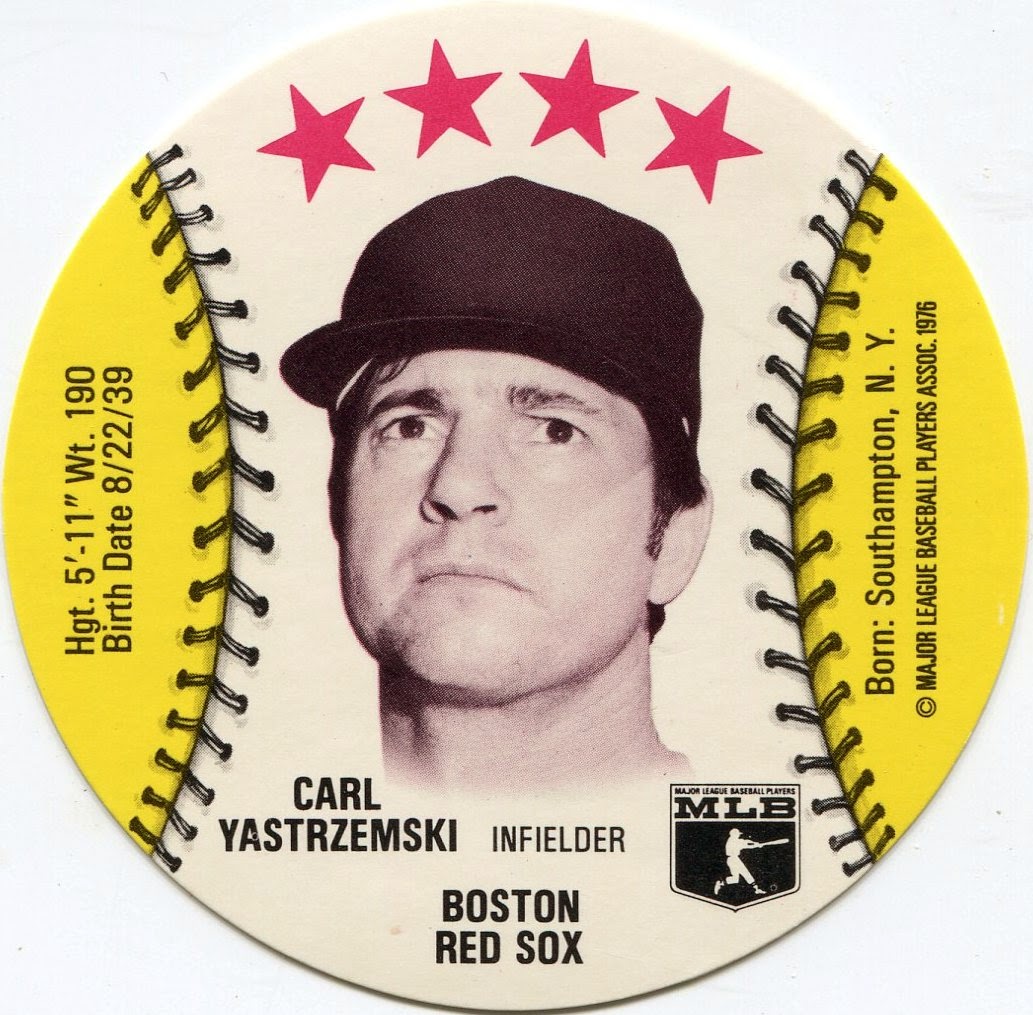 Not while Mark was throwing oddballs like these into the mix, anyways.

"Yaz" here hails from the 1976 Isaly's Discs series. From what I found, these were distributed in the Pittsburgh area through the Isaly Dairy and Sweet William Restaurants franchises.

Since Mark is an avid Red Sox collector, I have to assume this one was an extra for him.

Was the oddball barrage over? 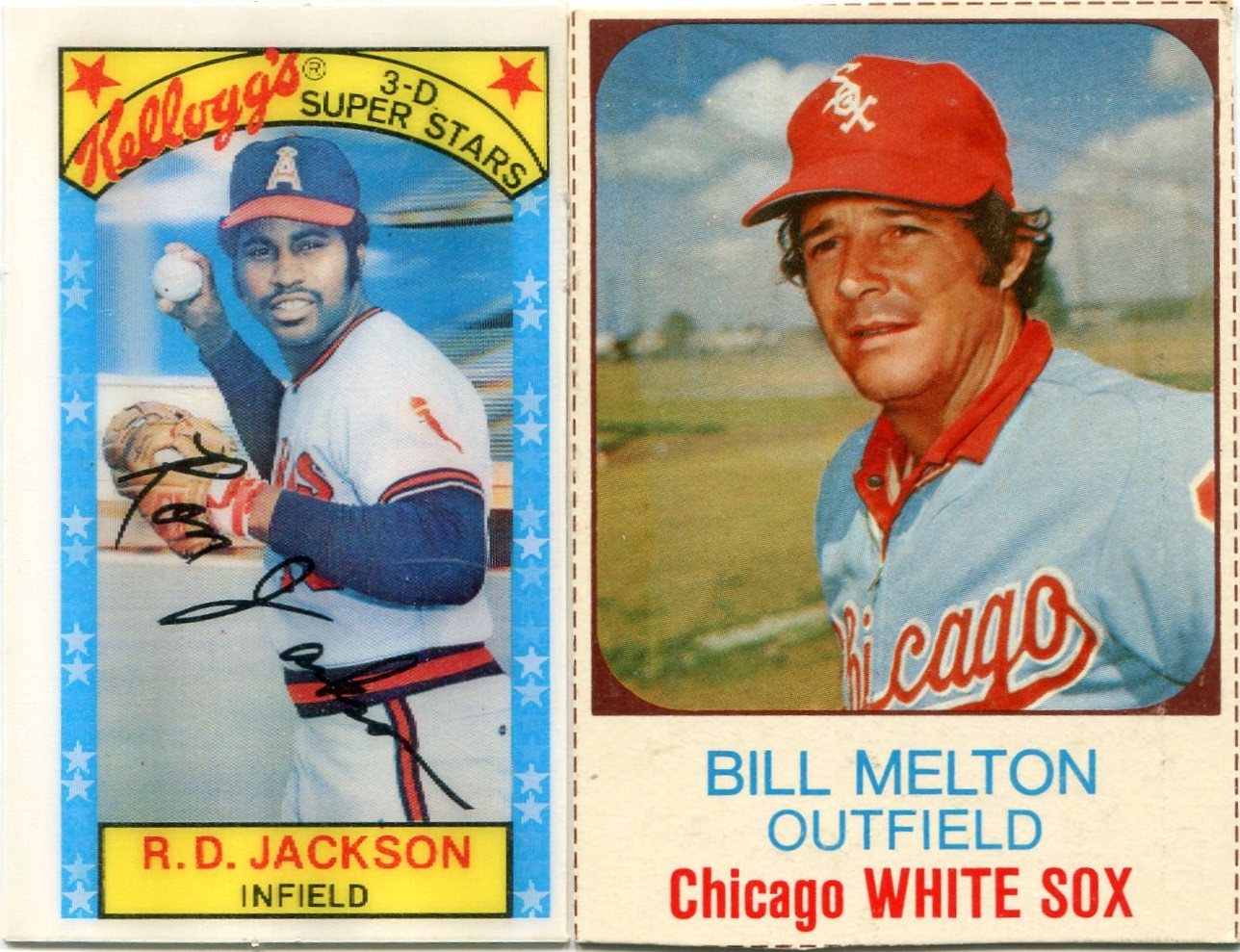 Such an oddball-filled post would be remiss without at least mentioning the Kellogg's and Hostess brands.

As far as I'm concerned, they're the kings of oddballs. 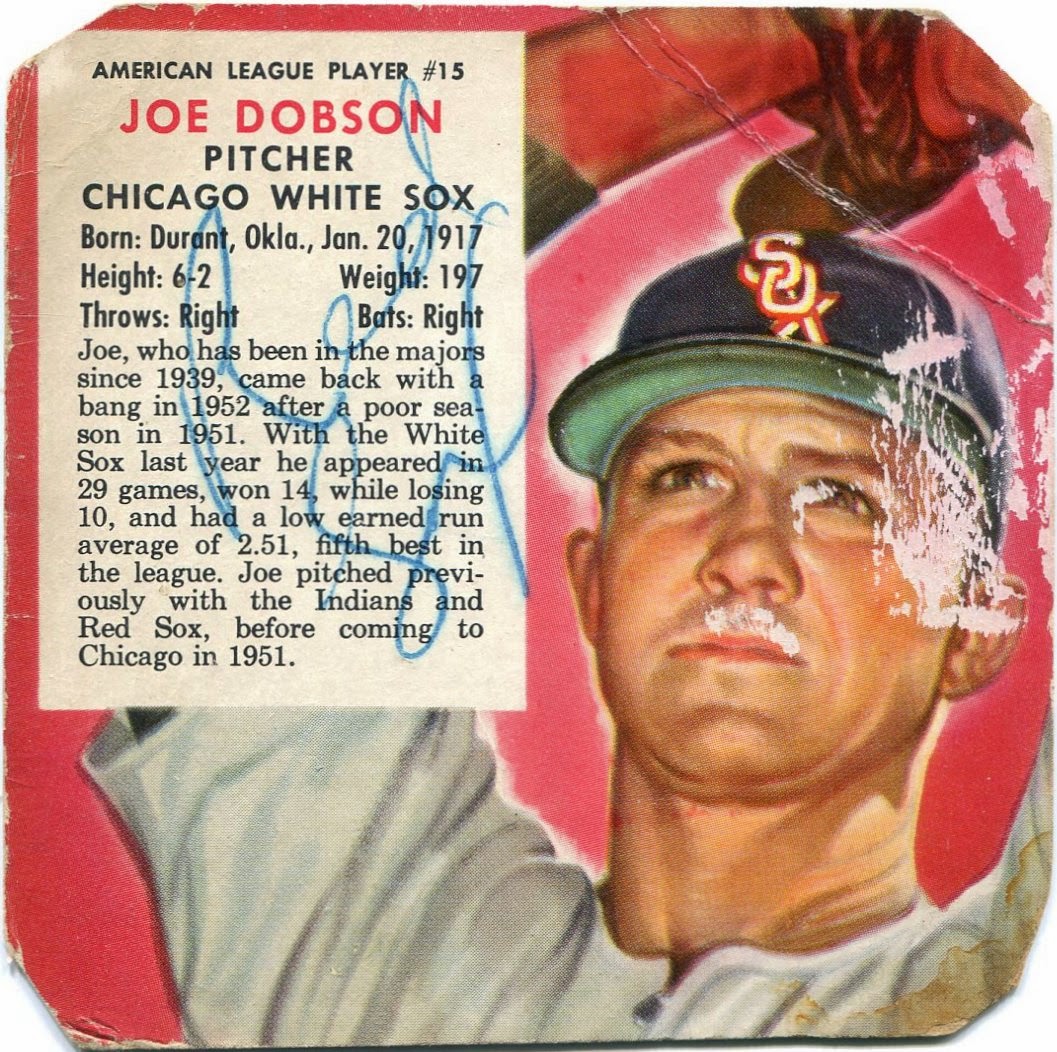 That said, neither were the kings of this trade package.

As hard as it might be to believe, I wasn't always on board with oddballs. For a while, I didn't view them with a great deal of importance.

Thankfully, that's changed in recent years. Few things give me more pleasure than finding a sweet new oddball for my collection.

Ever since my oddball epiphany, however, I've wanted to track down a 1950's Red Man single. Issued in packs of chewing tobacco, my searches for them had come up short.

Until Mark came along, that is.

I was shocked when a 1953 Red Man Joe Dobson fell out of this trade package. Years and years of searching had finally come to fruition.

If you know me at all, you'll probably know that the writing and paper loss don't matter to me in the slightest.

I'm just happy to finally have one in my collection. I'll still be looking out for more in the future, but at least I know what the joy of seeing one in-person actually feels like now.

That said, what if I told you this wasn't even the best thing Mark included in this trade package? 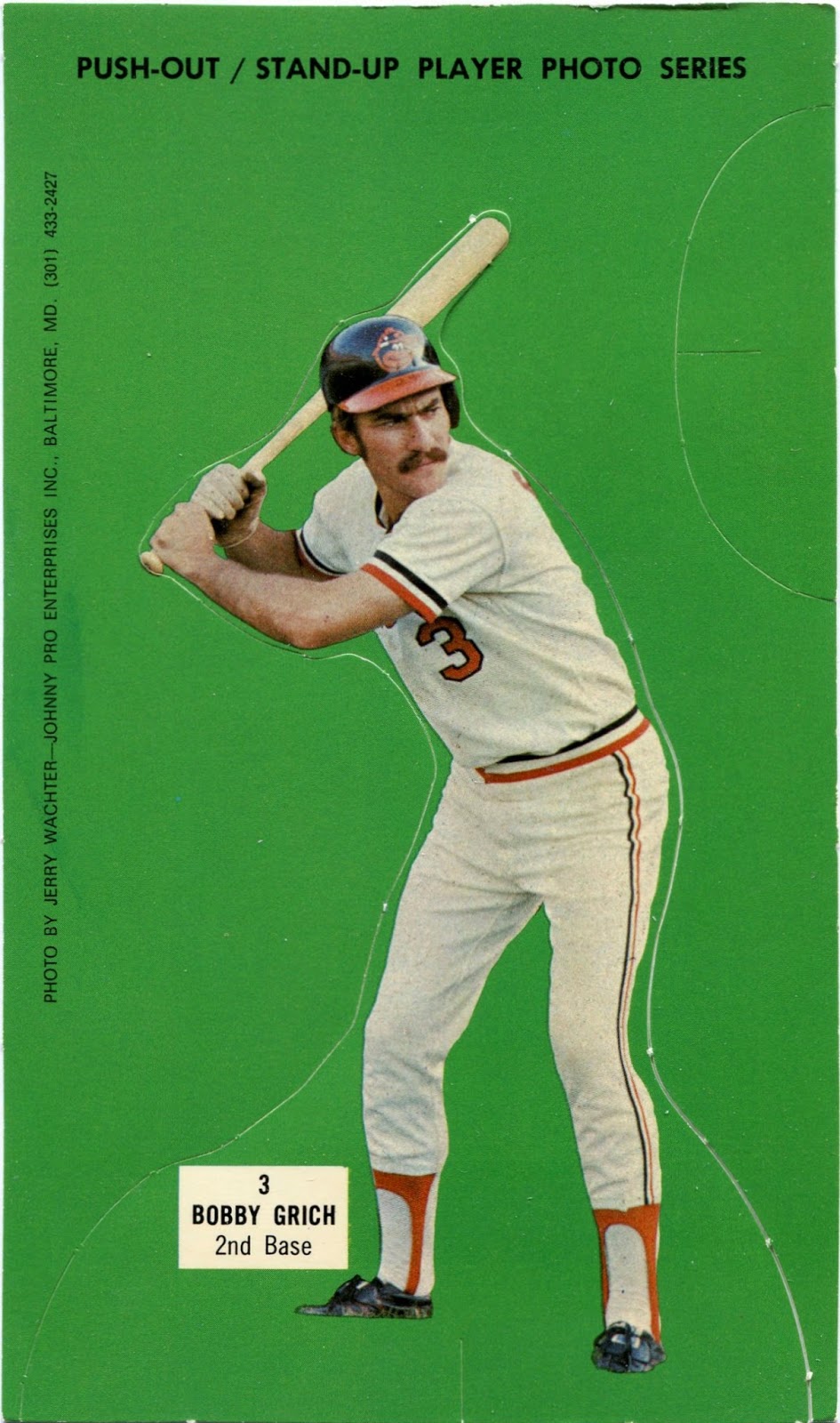 To me, this was the crown jewel from Mark.

When I decided to start collecting Bobby Grich, I never dreamed I'd own anything as sweet as this.

Coming from the rare 1973 Johnny Pro Orioles release, this massively oversized piece was meant to be folded out into a little stand-up figure. Though having something like that might be neat, I'll be keeping it intact for the purposes of my collection.

I have absolutely no idea how Mark managed to track down something like this.

All I know is that I'm glad he thought of me when he decided to unload it.

Given my oddball-loving ways, this was among the most fun I've ever had going through a trade package. And it's all thanks to Mark.

As I like to say, you can never go wrong with oddballs.

I've never believed that more until right now.
Posted by Nick at 6:37 PM

The Lopes is. 76 Greyhound Heroes of the base paths. The Discs were issued in 76 and 77. I believe all over the midwest. I have over twenty differant Yaz variations

Who knew the Vintage Virtuoso could be such an ODDBALL? Sweet stuff!

That disc from 76/77 looks an awful lot like those inserted into the 1977 Pepsi Gloves too.
Nice haul. READERS LIKE MARK ARE A TRUE BLESSING TO OUR GREAT HOBBY, AND BTW MARK NEEDS SOME HELP WITH HIS FLAGSHIP TOPPS 1971, AND I THINK 72. CHECK WITH HIM TO WHAT HE NEEDS.

That Grich is outstanding. That's the kind of thing you see on a PC checklist, but never expect to own.

Holy smokes... those oddballs and nonsports cards are awesome! I have to track down at least one of those Citgo coins for my collection.