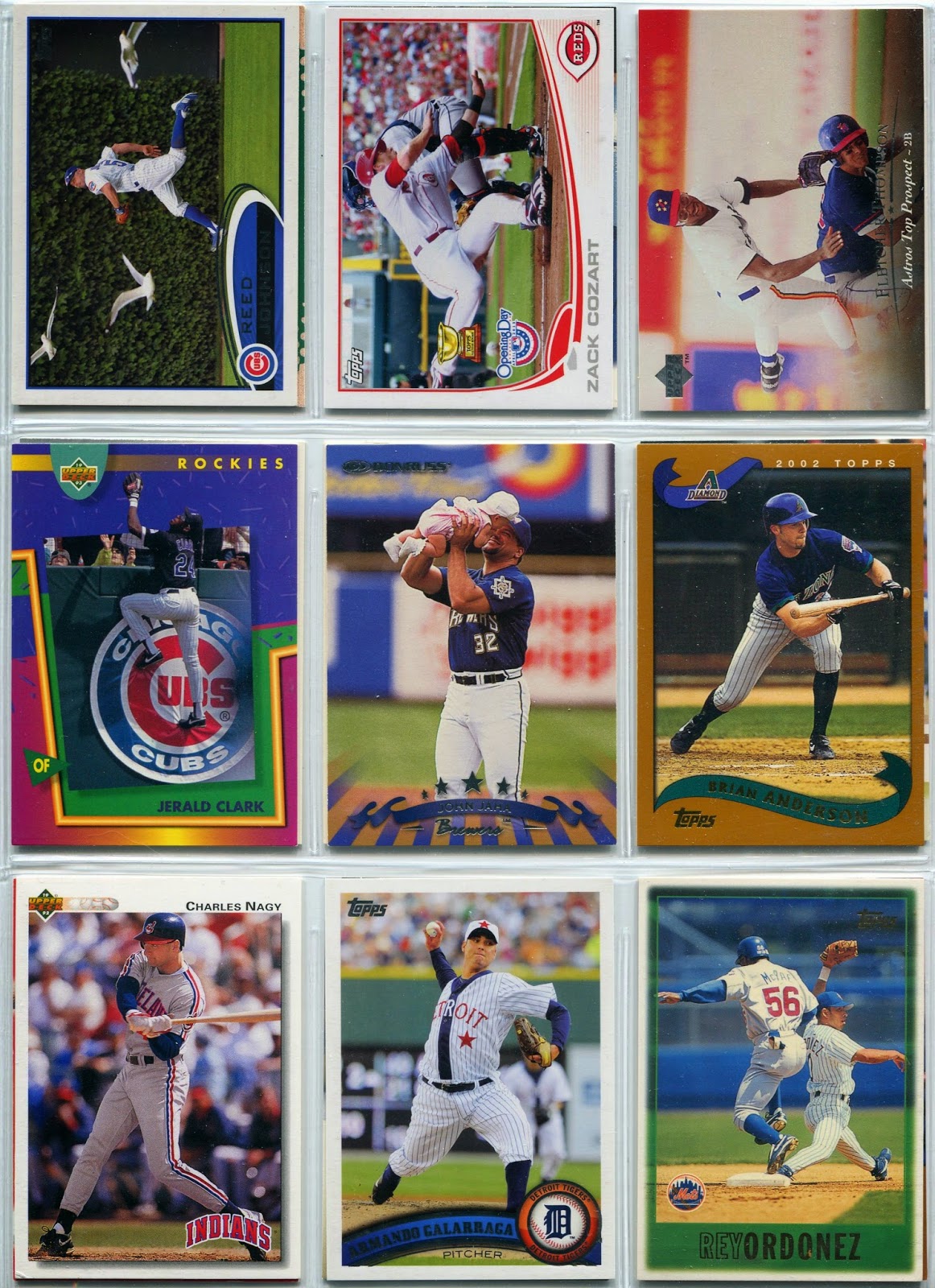 I don't know about the rest of you, but the reason I've always gravitated towards binders is basically for the aesthetics.

Though I've never tried it, I could probably keep my collection just as clean as organized if I did the box-sorting method. I don't think it makes too much of a difference either way.

Binders, however, offer a beauty that you can't get out of a plain white box. Pages like these are what I'm talking about.

I didn't plan it to be that way, but it's certainly an welcome bonus to an already terrific frankenset page. 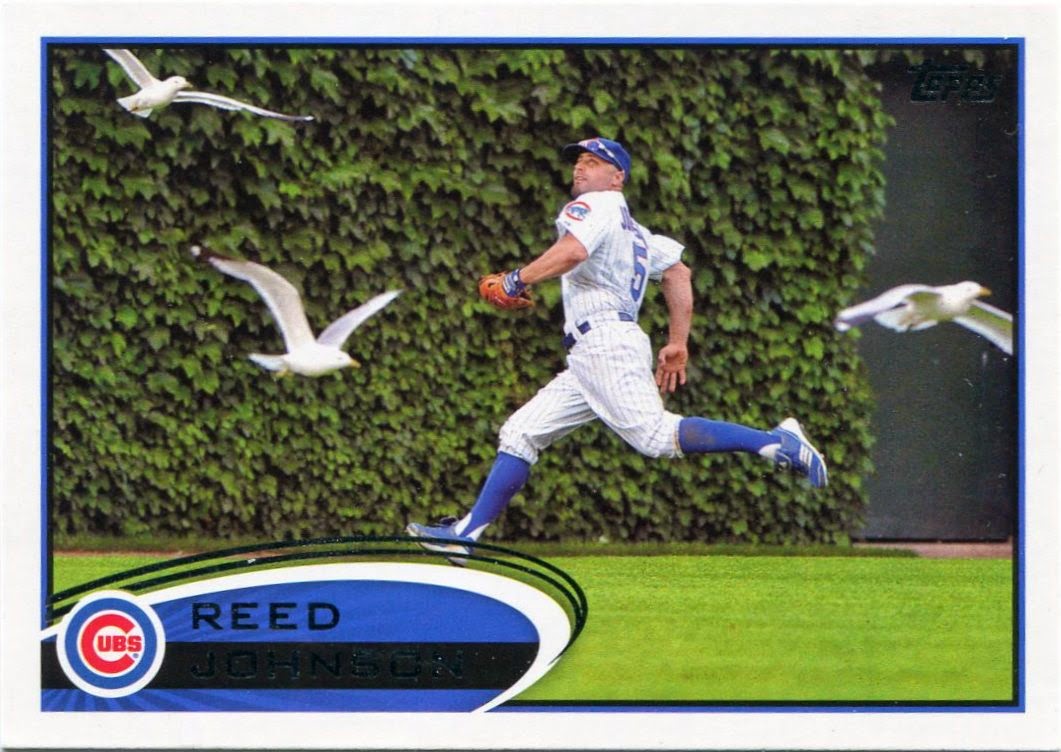 Today's page begins with one of the best cards of the decade thus far.

As most Chicagoans probably know, seagulls have been residents of Wrigley Field for a while now. Topps did an awesome job of capturing a few of them "in-action" with this beauty.

It's the only seagull cameo I've ever seen on a baseball card. 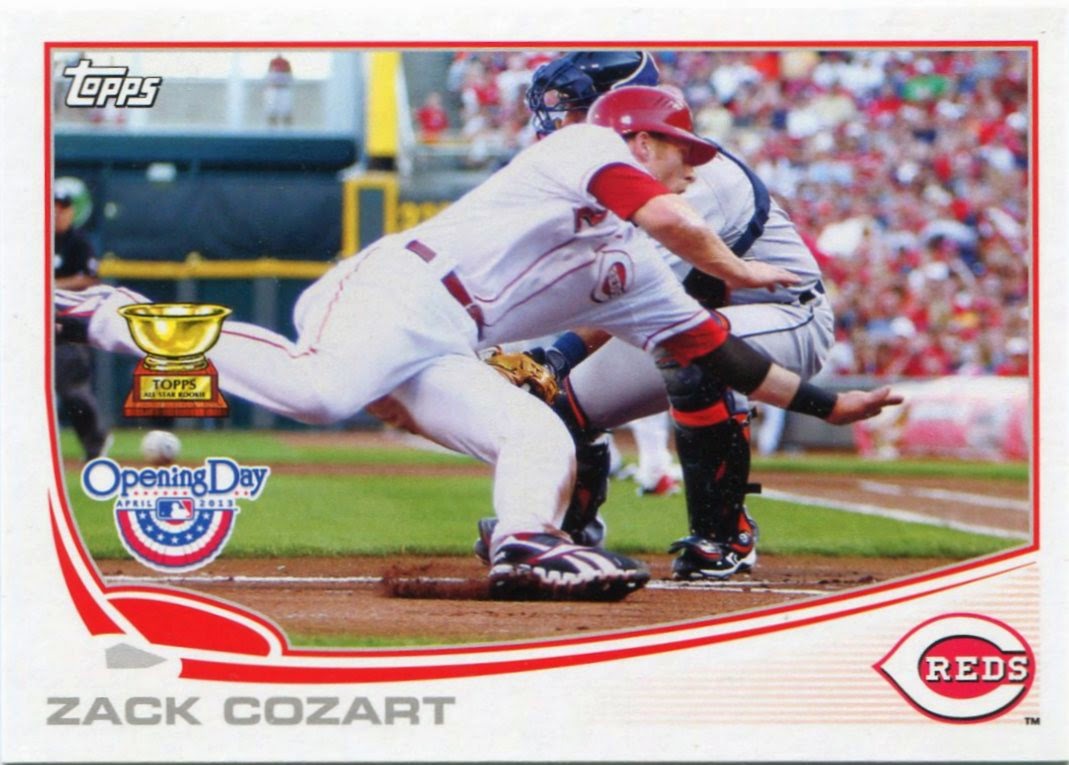 Though great, Cosart's regular Flagship issue didn't make the binder. Still, that left the door open for his Opening Day issue to make the cut.

As one of the better action shots in recent memory, this is a fantastic "play at the plate" shot.

Let's not forget the precious Rookie Cup, either. 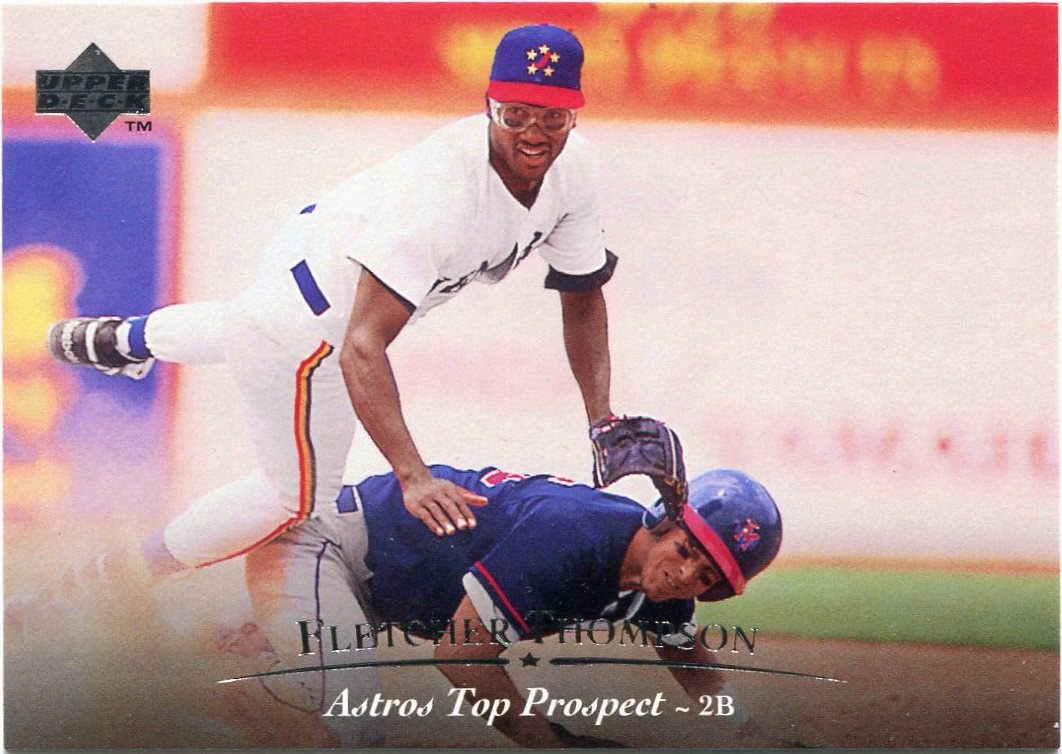 As these '90s minor league cards always seem to get me to do, I went to research whether or not Fletcher Thompson ever actually made it to the bigs.

Sadly, he didn't. In fact, he never even made it above Double-A.

Still, he'll always have this neat double play card to his credit. 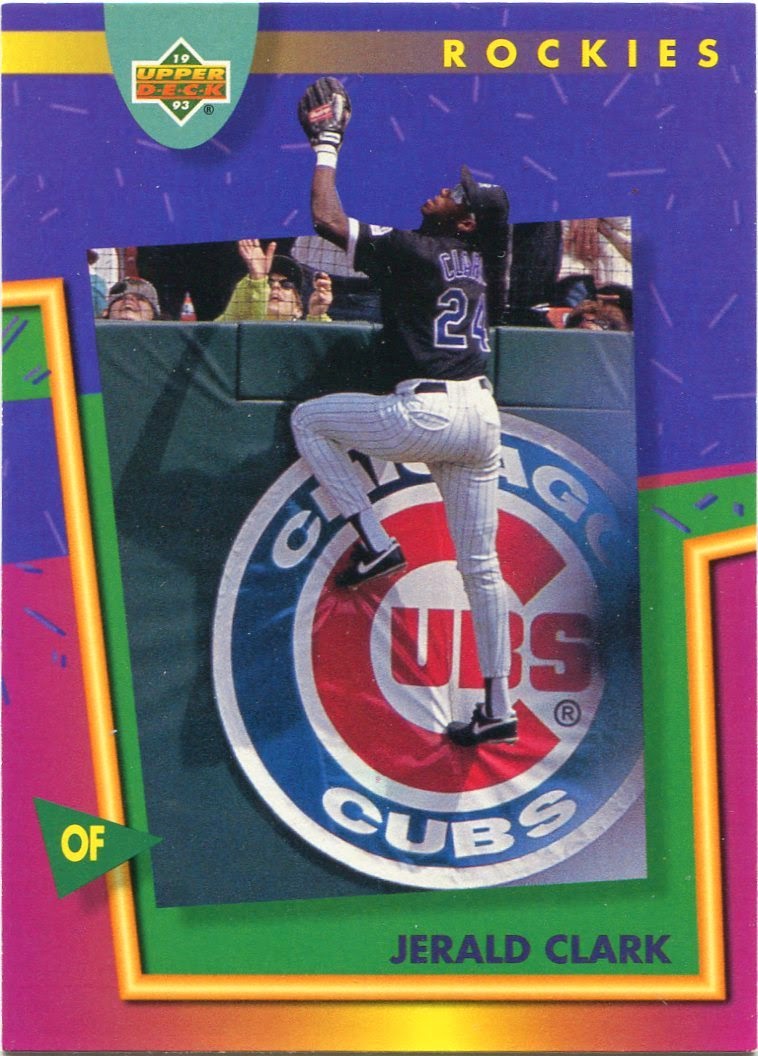 If this card is any indication, 1993 UD Fun Pack is a rather underrated set.

The design has a very Saved By The Bell feel to it. I especially like how Mr. Clark appears to be climbing the frame of this card in order to chase down a long fly ball.

It earns extra points for the Cub logo cameo, of course. 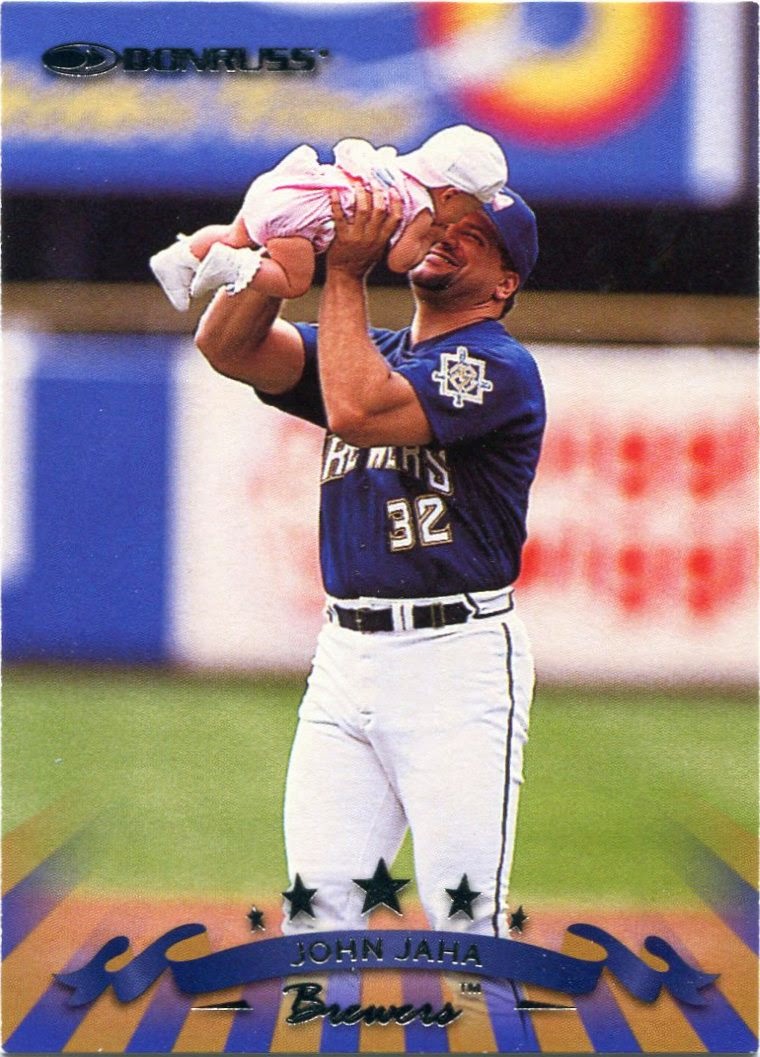 Mr. Jaha here is one of the better inductees in my "cards with kids" mini-collection. For anyone who cares, Brian Anderson was a .137 career hitter. 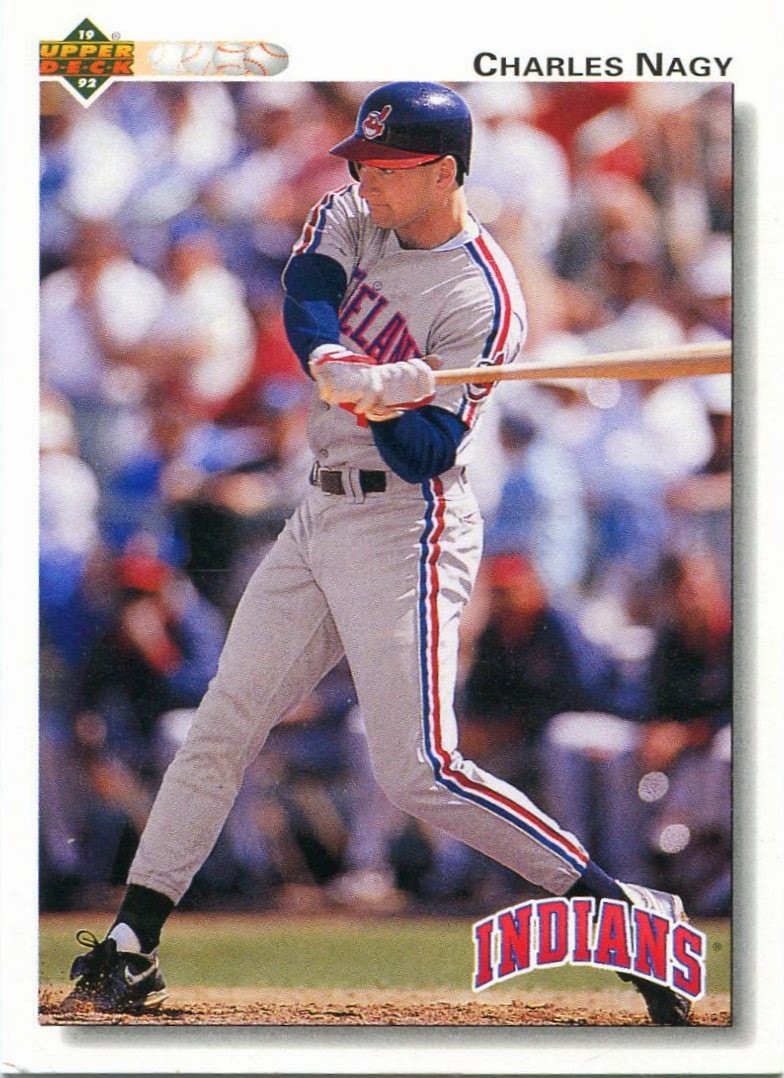 Charles Nagy is part of a rare breed when it comes to this mini-collection of mine.

He's a rare post-DH/pre-interleague American League "pitcher at the plate". I'm guessing that even in the post-DH era, AL pitchers had to hit in spring training, which most likely explains the basis for this shot.

That alone makes it a terrific frankenset nominee. 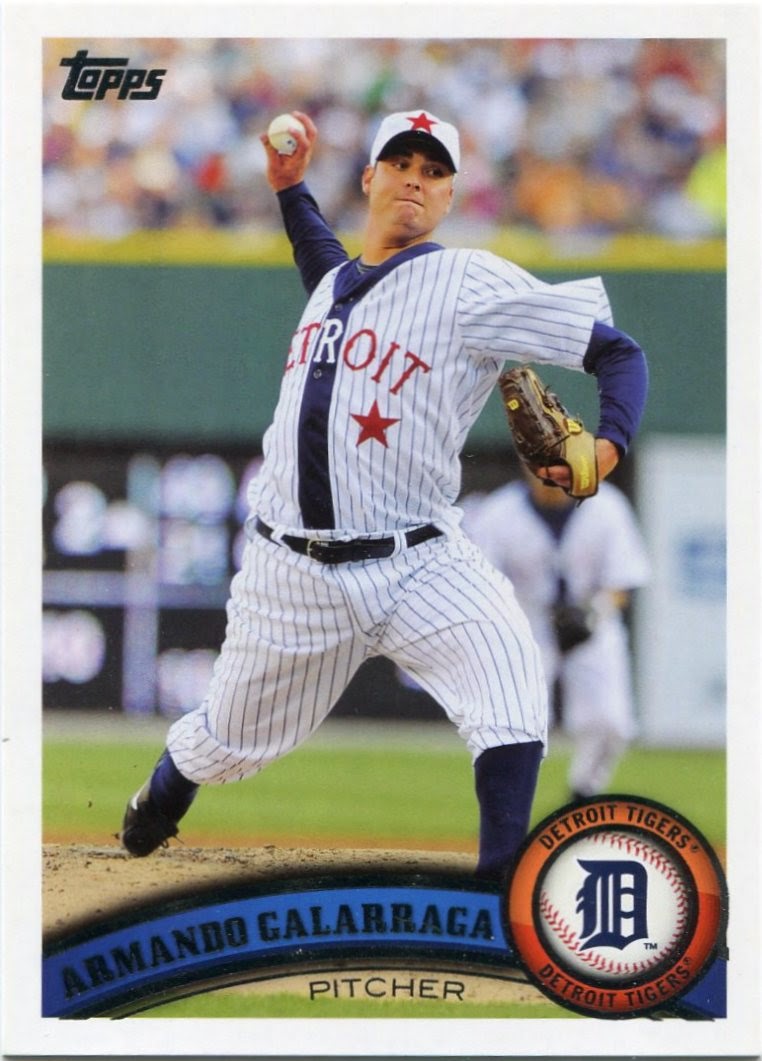 To most fans, Armando Galarraga will always be remembered as the guy who lost his perfect game on a blown call.

I'm one of them. As far as on-field action goes, I have no other lasting memories of him.

If we're talking cardboard, though, the name "Armando Galarraga" instantly brings this one to mind. It's a terrific "throwback" shot that features some nifty Negro League duds.

Galarraga may have enjoyed his fifteen minutes of fame, but he'll always be remembered for this beautiful baseball card.

At least to me, anyways. 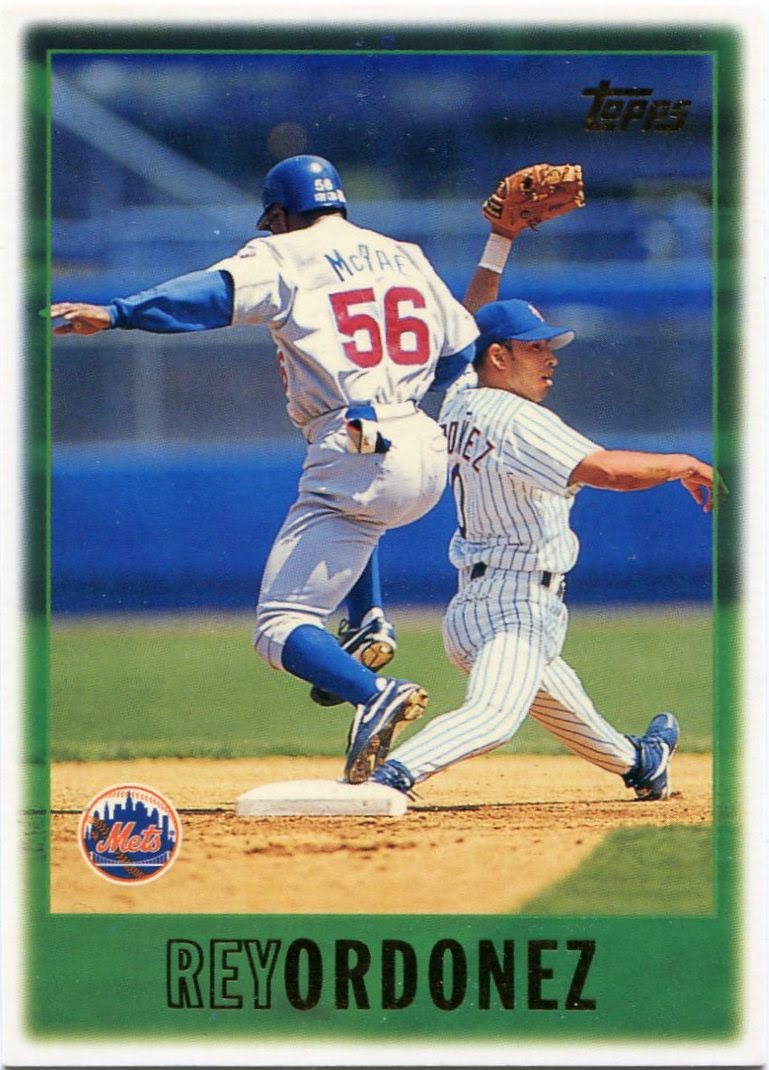 We close out today's page with one of the more confusing cards in my frankenset.

Maybe it's just me, but I don't know of many other shots that feature guys going back to a base they had previously occupied.

Pickoffs are the most common scenario for that sort of action. However, judging from Ordonez's awkward stretch, this doesn't appear to be one of those.

My only guess is that Brian McRae was forced out at second after a line drive to the first or second baseman. It would explain the emphatic leap back to the bag and Ordonez's odd positioning.

It's always nice when a baseball card makes you think.

I guess that's part of the reason why I collect in the first place.
Posted by Nick at 5:08 PM