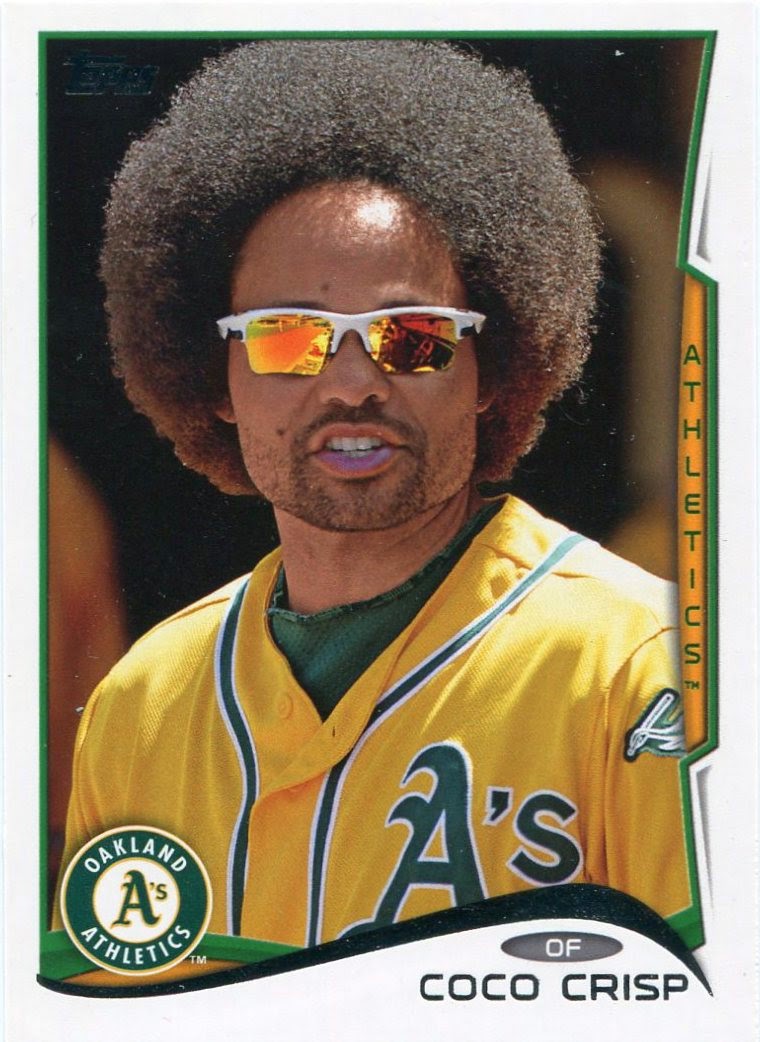 For a while, I was really into fantasy sports.

The concept of drafting and controlling your very own team was something that interested me. I'd draft three or four fantasy baseball teams a year.

I also indulged pretty heavily in fantasy football and hockey. And, even though I know next to nothing about the sport, I even dabbled in basketball.

I guess I just got burnt out with the whole thing after all that. I haven't so much as touched a fantasy league in the last couple years.

As 2014 approached, though, the old fantasy pull began again. I didn't want to go all-out like before, but the prospect of owning a single fantasy baseball team intrigued me.

So, a few weeks ago, I joined a league and created my team, which I named "Coco's Fro" in honor of the A's outfielder's legendary hairstyle. Not long after that, I drafted my squad.

I didn't do any intense research or anything like that. I just drafted guys who I thought would fit on my team based on my knowledge of the game.

In fact, it's time to meet my fantasy team. 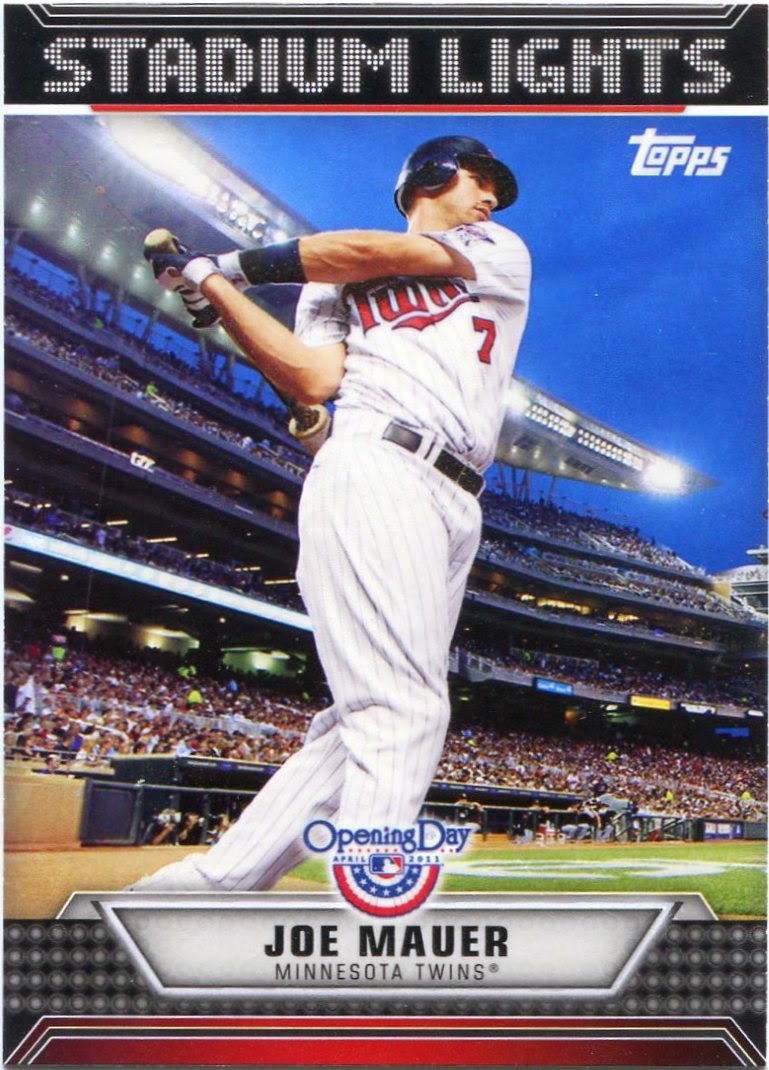 This wasn't a rotisserie draft, where each owner bids dollar amounts to build their squad.

I could never get the hang of all that. No, this was your standard 10-team snake draft, where the draft order reverses after each round. (For example, if you had the 10th pick in the first round, you'd have the first selection in the second. Then back to the 10th in the third, and so on.)

I started with the fifth pick, alternating between the 5th and 6th selections the whole draft. I was pretty much smack dab in the middle of the draft order, which I feel is the best place to be.

When it came my time to draft in the seventh round, I couldn't believe that Joe Mauer was still on the table. Though he'll be playing first base in 2014, he's still eligible at catcher in fantasy leagues this year.

I snapped him up in a second.

He's a great backstop to build a team around. 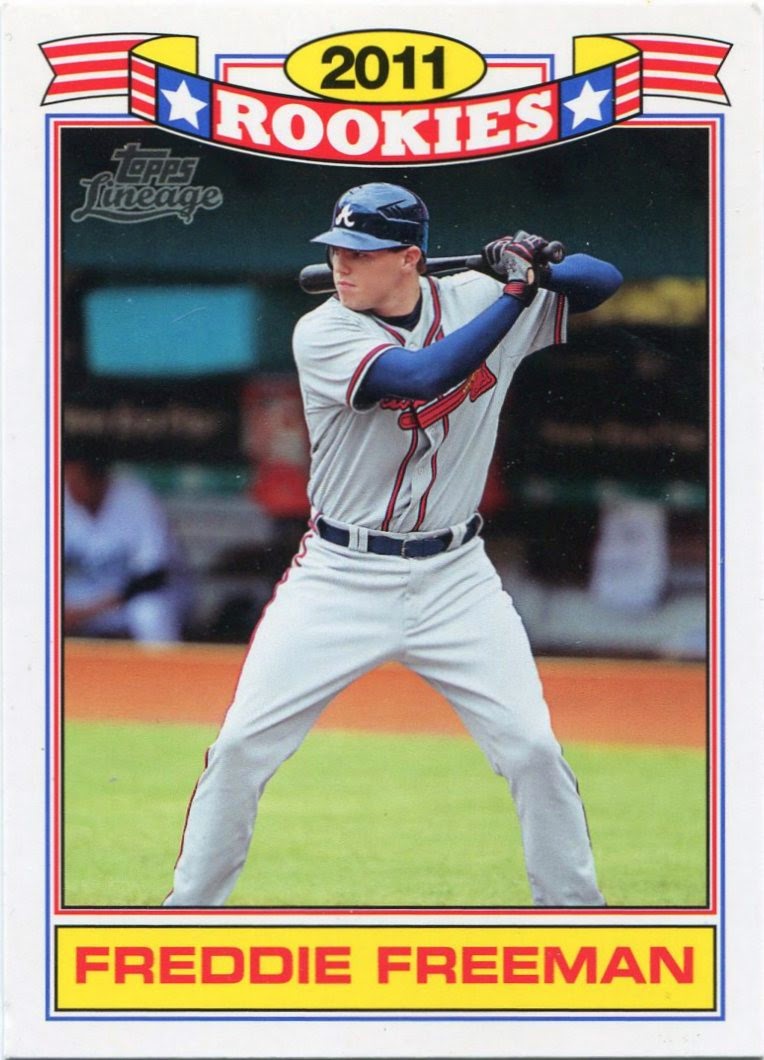 Youth is a big thing for me when I play fantasy.

I try not to draft too many aging superstars, instead relying on younger players with more potential.

Freddie Freeman has contended for an MVP award in his career and just received a juicy offseason extension with the Braves. And he's still just 24 years old.

I expect nothing but good things from Mr. Freeman in 2014. 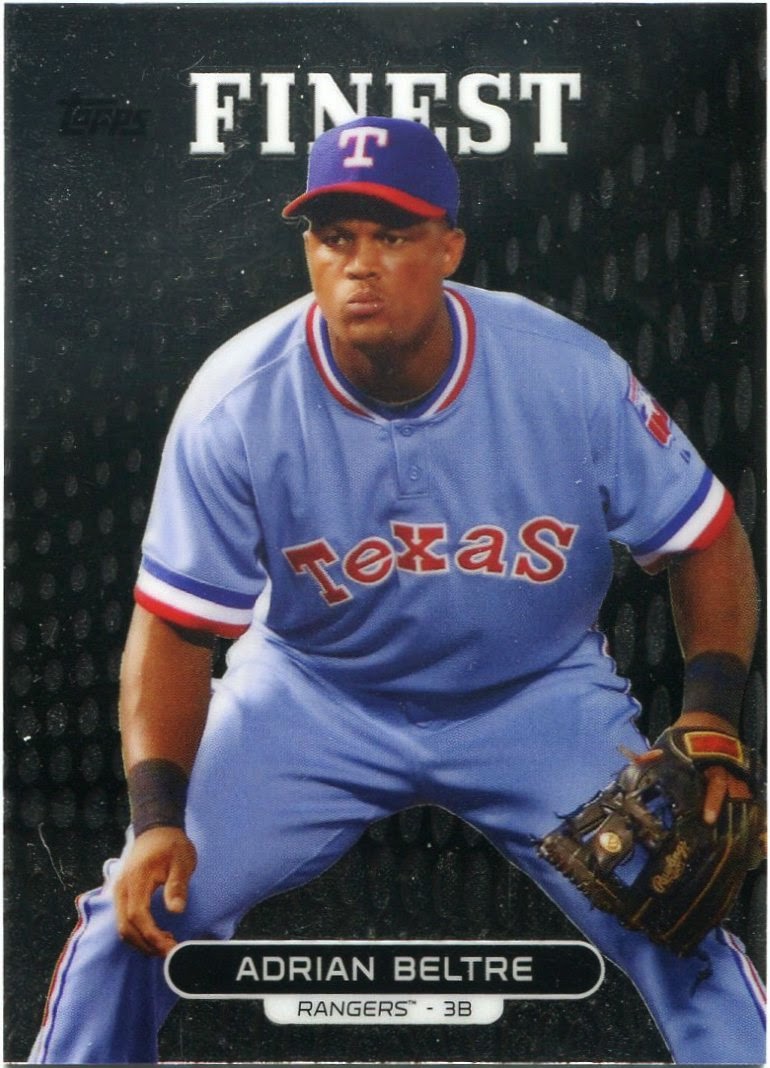 Consistency is another cornerstone for fantasy sports.

There aren't many more consistent players in the bigs than Adrian Beltre. Though I usually hate using fantasy-based terms like "beast" or "stud", I don't think there's much denying that Beltre is nothing short of a beast.

He's hit at least 25 homers in each of the past three seasons. With the additions of Prince Fielder and Shin-Soo Choo in an already stacked Rangers lineup, he's going to have even more protection in the batting order.

As I've found, having good players around a "stud" in fantasy is a big deal. 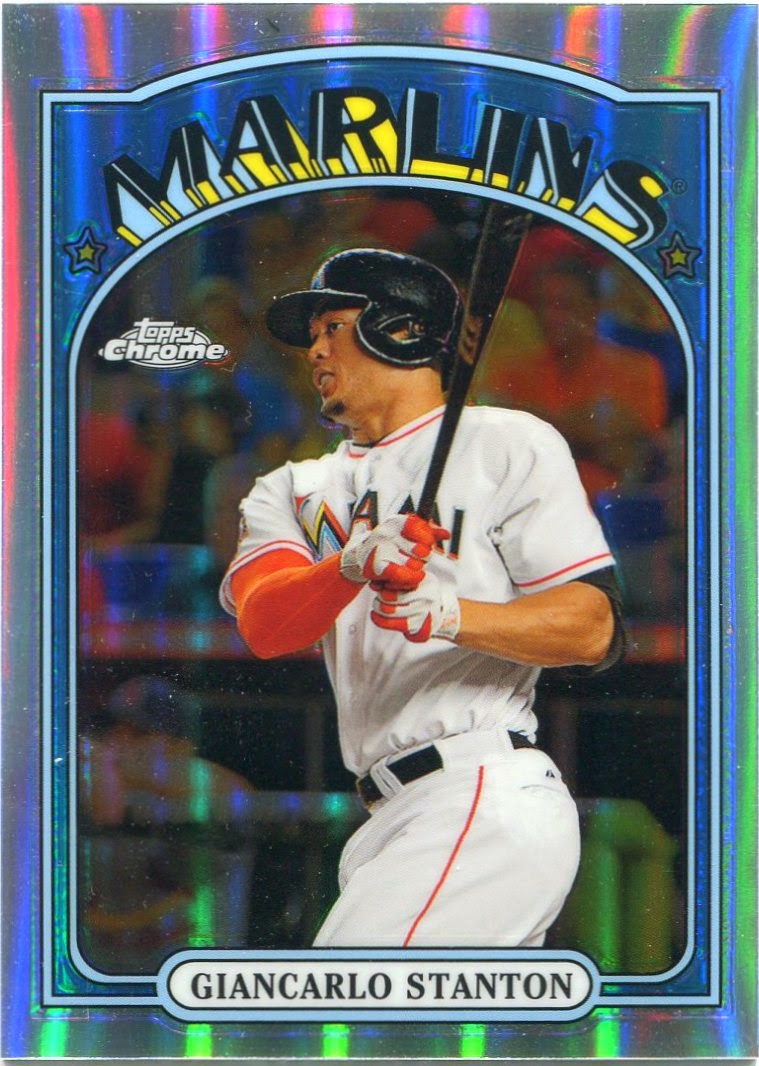 That sense of protection is the only thing that worries me about Giancarlo Stanton.

This guy has more pure power than any player I've ever seen. If he had guys like Fielder and Choo batting around him, he'd pretty much be a lock for 50 homers.

I think Stanton will rebound from his recent injuries, but I'm not sure anyone will want to pitch to him in that fairly weak Marlins lineup. (On-base percentage unfortunately doesn't count in this league.)

Nevertheless, I think he's good for at least 30 homers this year. 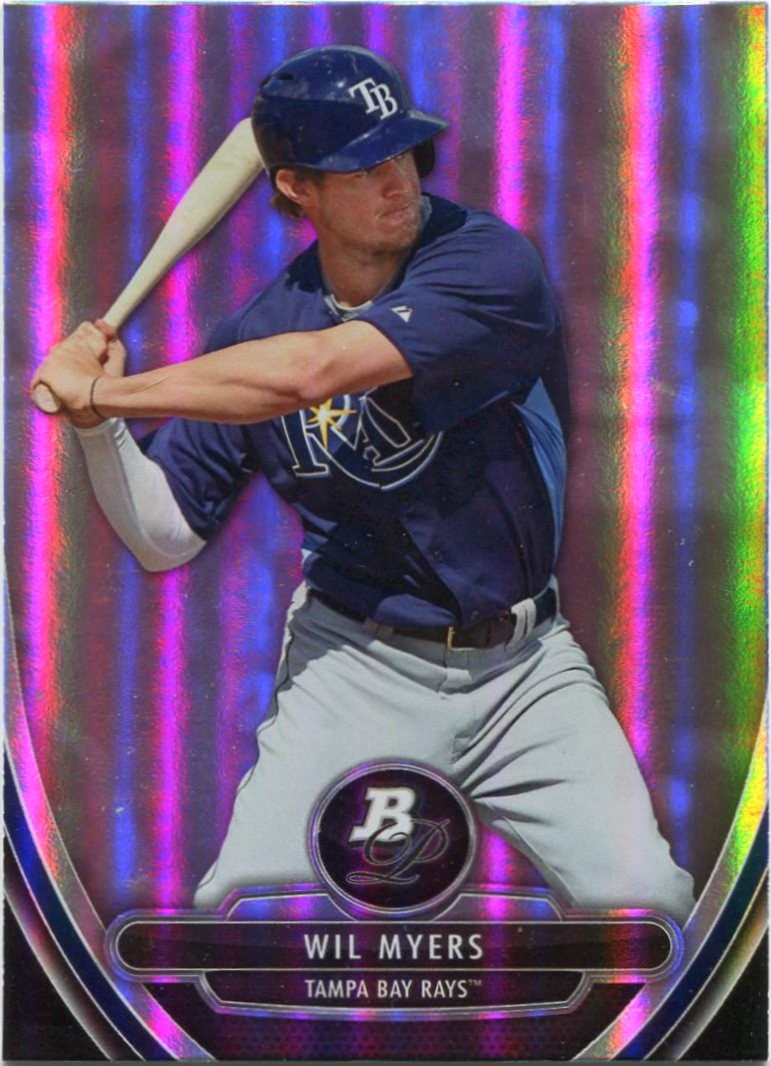 Despite only playing in 88 games last year, Wil Myers was still the runaway winner of the 2013 AL Rookie of the Year award.

I'm hoping he'll improve on his already terrific numbers in 2014.

This was one of my better steals of the draft, I think. 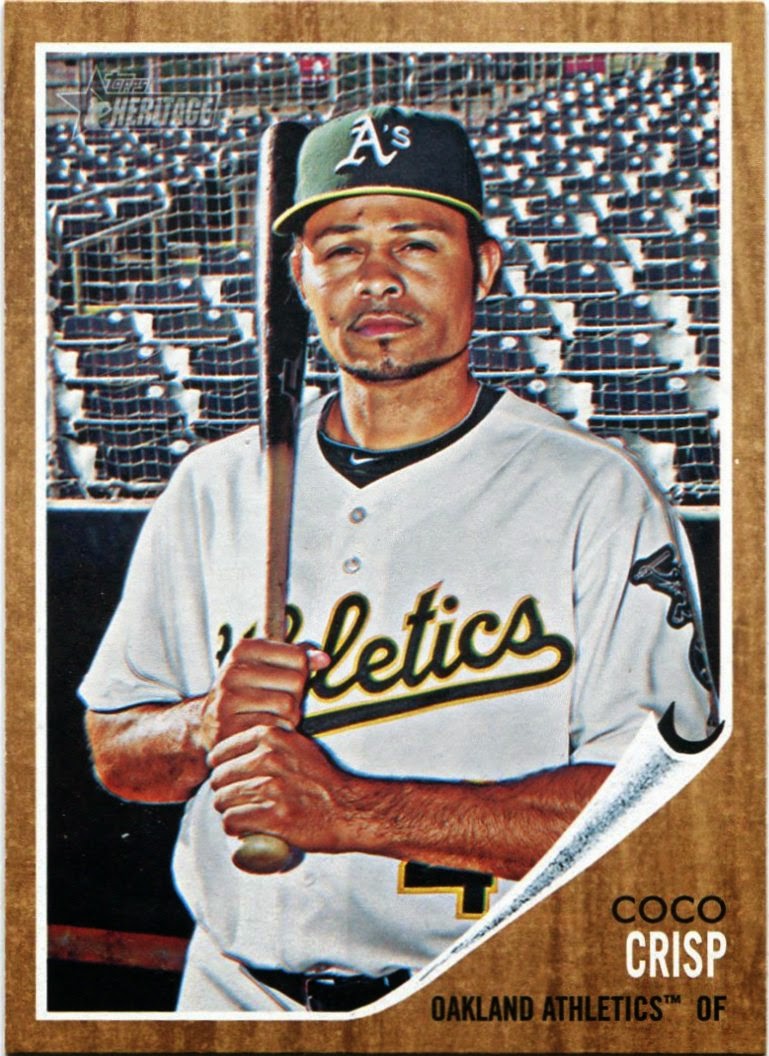 A team named "Coco's Fro" has to have Coco Crisp on the roster.

Perhaps, but I wasn't really planning on taking him. Though I don't expect him to equal his 20-20 totals in 2013 (21 steals and 22 homers), Crisp fell deep into the draft. Landing good ol' Coco in the 18th round was just too tempting.

With a team like this, it's a match made in heaven. 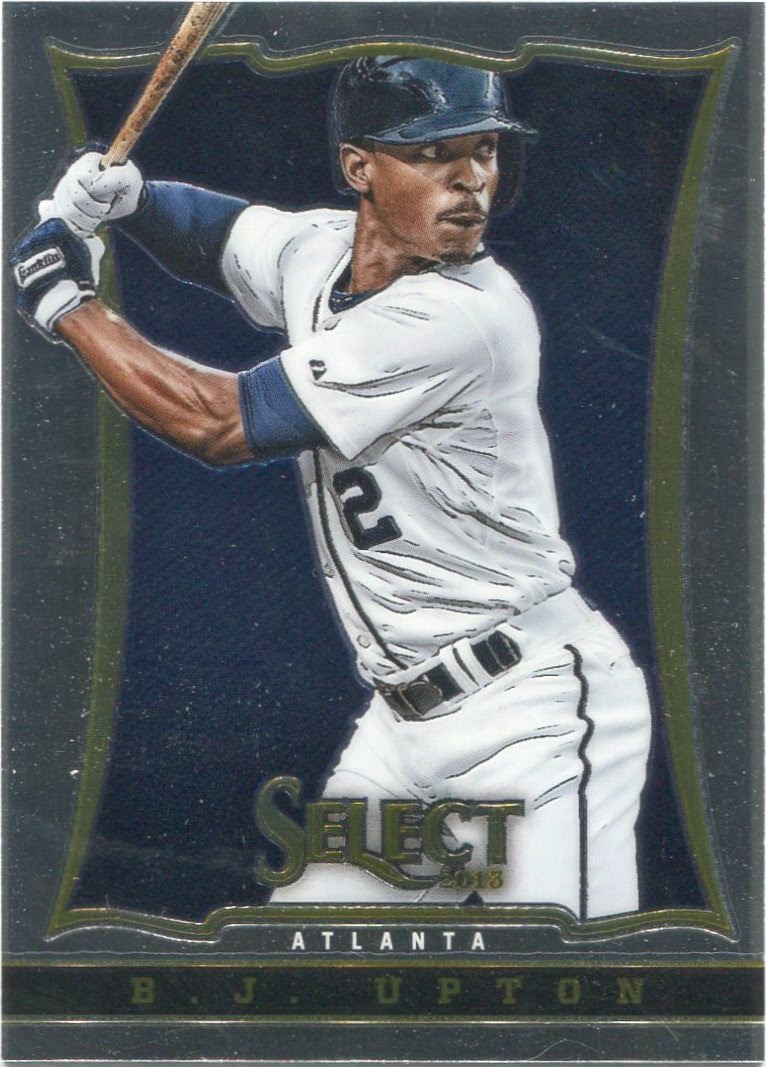 After hitting .184 with just nine homers last year, my philosophy on B.J. Upton is fairly simple.

There's nowhere for him to go but up in 2014. I doubt he'll post another sub-.200 average, and I think he'll hit double digits in dingers.

I can't see him returning to his Rays form. But, seeing as how I picked him up in the later rounds, all I'm asking for is a little improvement from Mr. Upton.

I don't think that's too far out of the question. 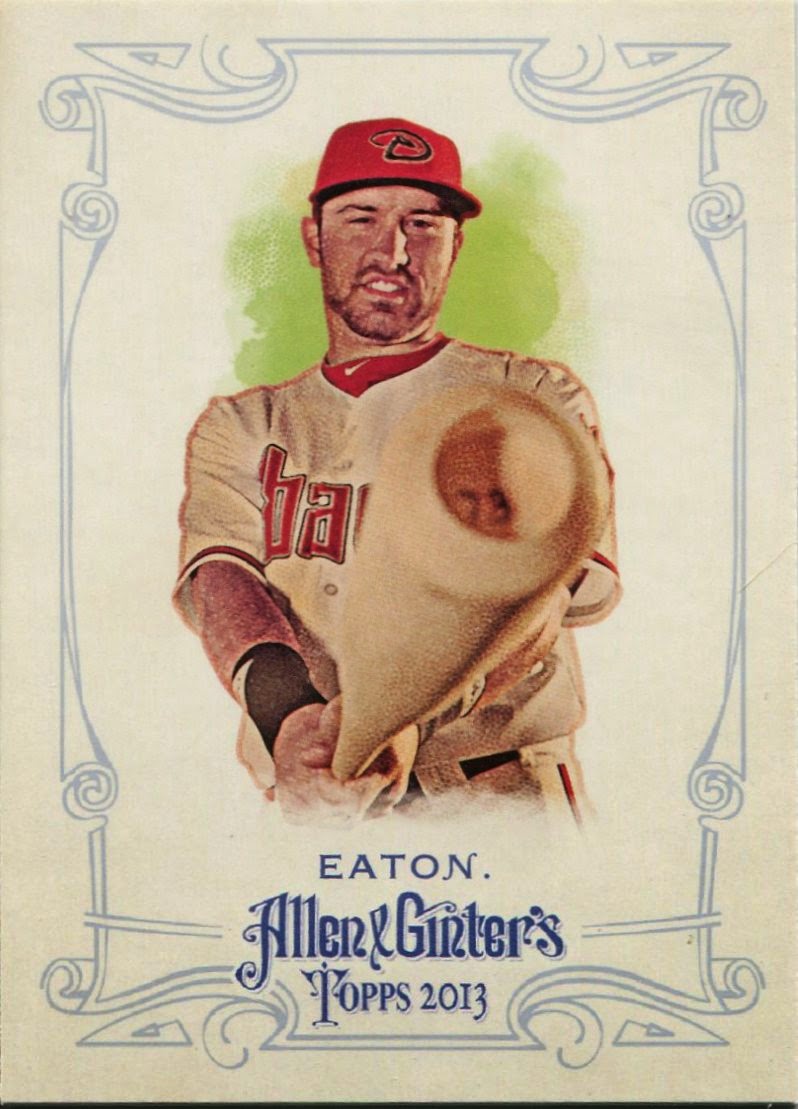 This is my sleeper pick of the year.

Adam Eaton went to the hometown White Sox in a three-team deal that sent Mark Trumbo to Arizona this offseason. From what I've heard, he has the potential to have a deadly power/speed combo.

I think he'll surprise a lot of people this year here in Chicago. I'll be tracking his progress throughout 2014.

Oh, and I've recently decided to make him a "binder guy" based on this fantasy team.

I guess fantasy sports can have an effect on how I collect. 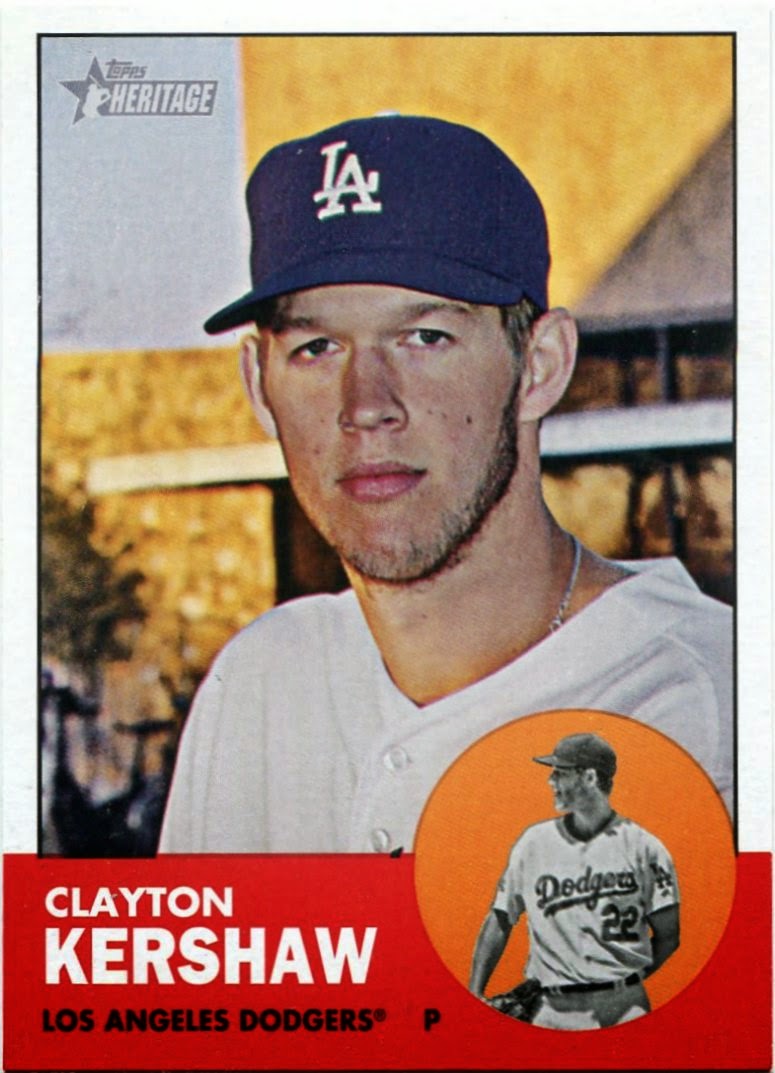 With guys like Trout and Cabrera off the board, Mr. Kershaw was my very first pick in this draft.

He's coming off one of the more dominating seasons in recent memory, one that landed him his second Cy Young Award.

Using my first round pick on Clayton Kershaw was probably one of my better decisions in the draft. 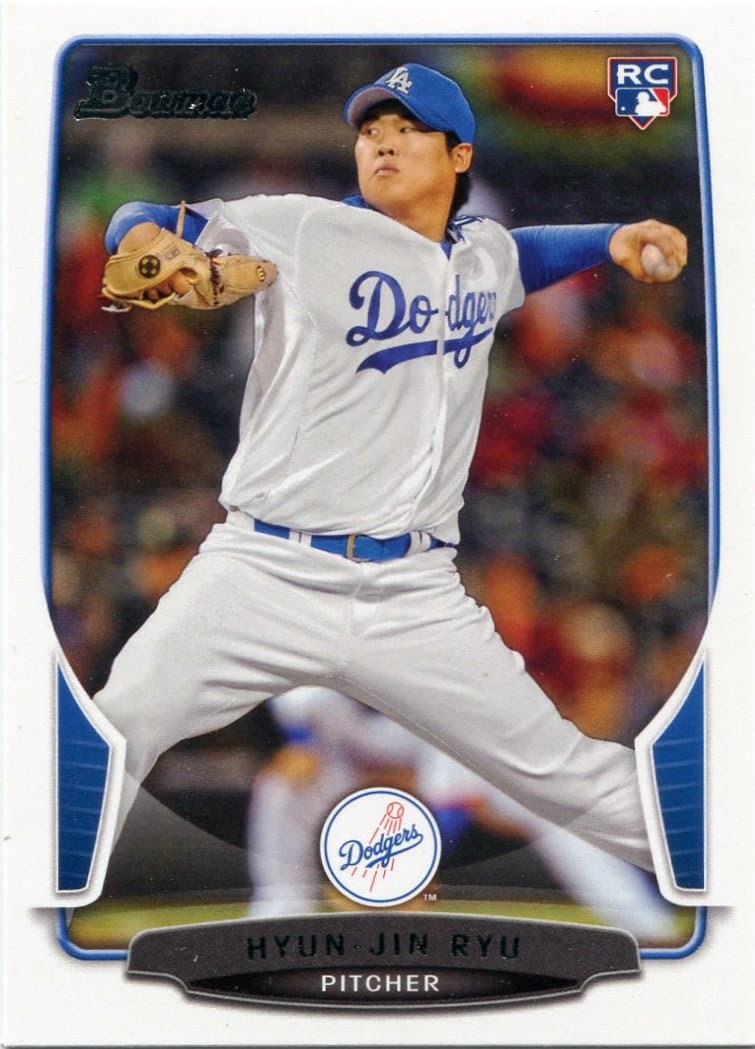 I'm going to be relying on the Dodger rotation heavily in 2014.

All things considered, I'll have to root for the Dodgers a little more than usual in 2014. 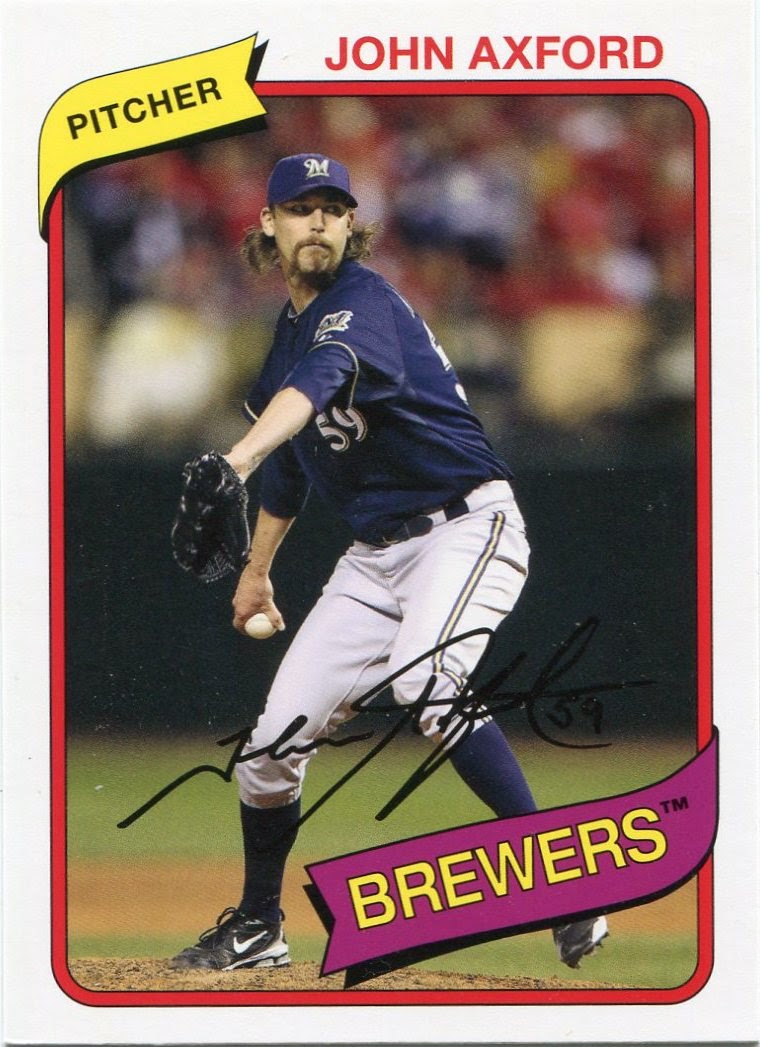 From a fantasy standpoint, closers are the most fragile players in the game. One bad month and a once-dominant closer is at risk of being replaced by some middle reliever out of nowhere.

That's why I didn't select a closer until the 15th round of this draft. Not only that, but half of my last six picks were used on closers. There's not a whole lot upside in using a higher slot on them.

Although John Axford didn't record a single save between the Brewers and Cardinals in 2013, he's set to become the Indians closer this year. (I'm still peeved that no one made a card of him as a Cardinal.)

Though I don't think we'll ever see a return to his big years with the Brewers, I think Axford will be good for at least a few saves in 2014.

All because I didn't pay for saves. 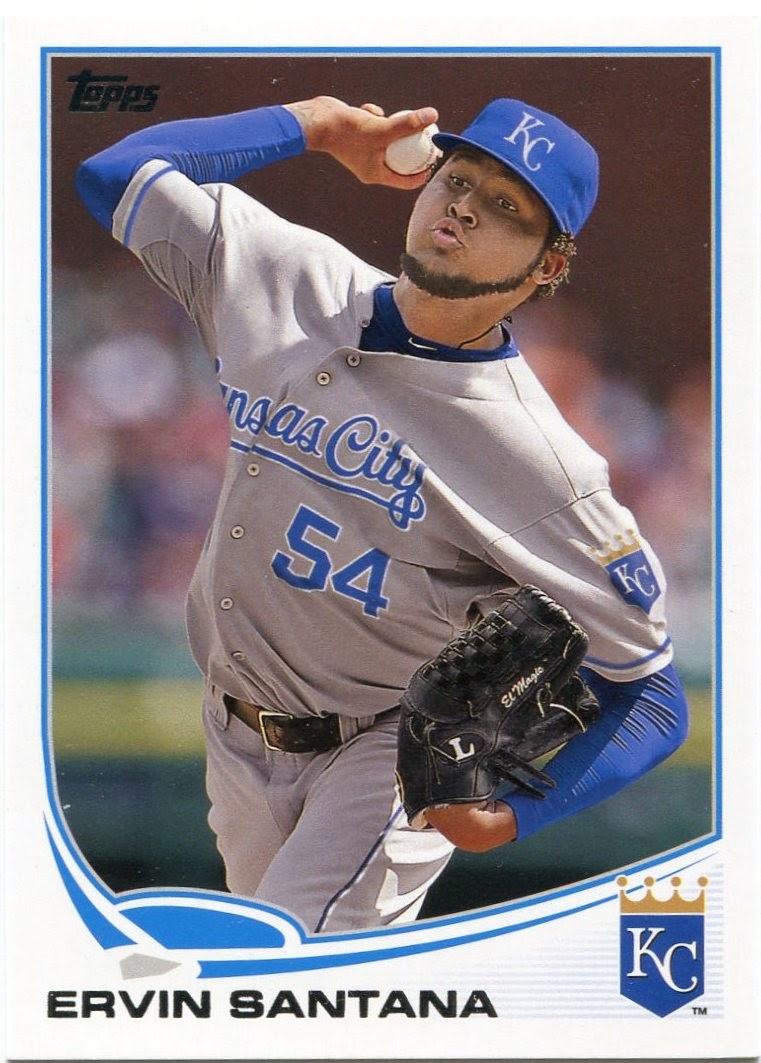 When this draft was held, Ervin Santana was still a free agent.

Although he was coming off a surprisingly good year, his unemployment allowed him to slip all the way to the 24th round. Figuring Santana would sign with a team sometime before the season started, I thought it was safe to use a late pick on him.

As it turns out, I was right. He just signed a one-year deal with the Braves a few days ago.

Now, I'll hopefully be reaping the rewards of the 24th-round pick.

The only major change I can see is picking up a new starting pitcher to replace Kris Medlen, who is likely to need Tommy John surgery. Other than that, I think I'm pretty much set.

Although every fantasy owner says this at the beginning of the year, I think I did fairly well with this draft.

You're pitching is scary.

Any chance you want to go for a second team? I have a fantasy league made up of bloggers (and a few former bloggers) and we lost one manager this year.

Don't know anything about fantasy. But that looks like a good team