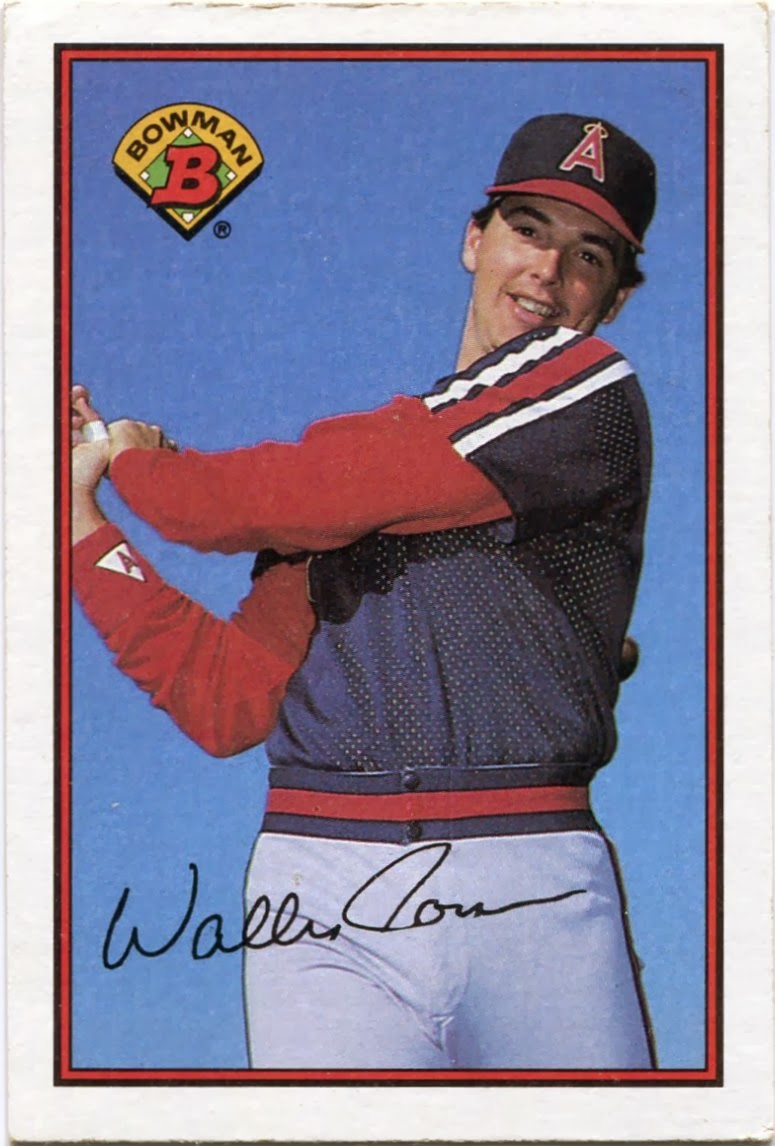 In case you happen to be new to this blog, I'm a self-proclaimed "binder guy".

About 99 percent of the keeper cards in my collection are housed in binders. It's been that way for as long as I've been in this hobby.

Naturally, you'd think that I'd have a distaste for anything that doesn't fit snugly inside a binder page. Though they're vastly undersized, I have don't have much of a problem storing minis. Sure, they may shift and shuffle around a bit, but at least they're not jutting out of the page like some ugly monstrosity.

You probably already know that '89 Bowman singles are a bit taller than your standard pieces of cardboard. Because they're the same width, I can store them in my binders without much of a hassle. But the fact that the tops stick out of my pages really bothers me.

That, plus the yawn-tastic design, makes 1989 Bowman my least favorite set of all-time. I've gone on record with that statement before.

There's been some talk of trimming these things down to standard proportions lately. For whatever reason, though, I just can't bring myself to do that.

Not even with the disaster that is '89 Bowman. 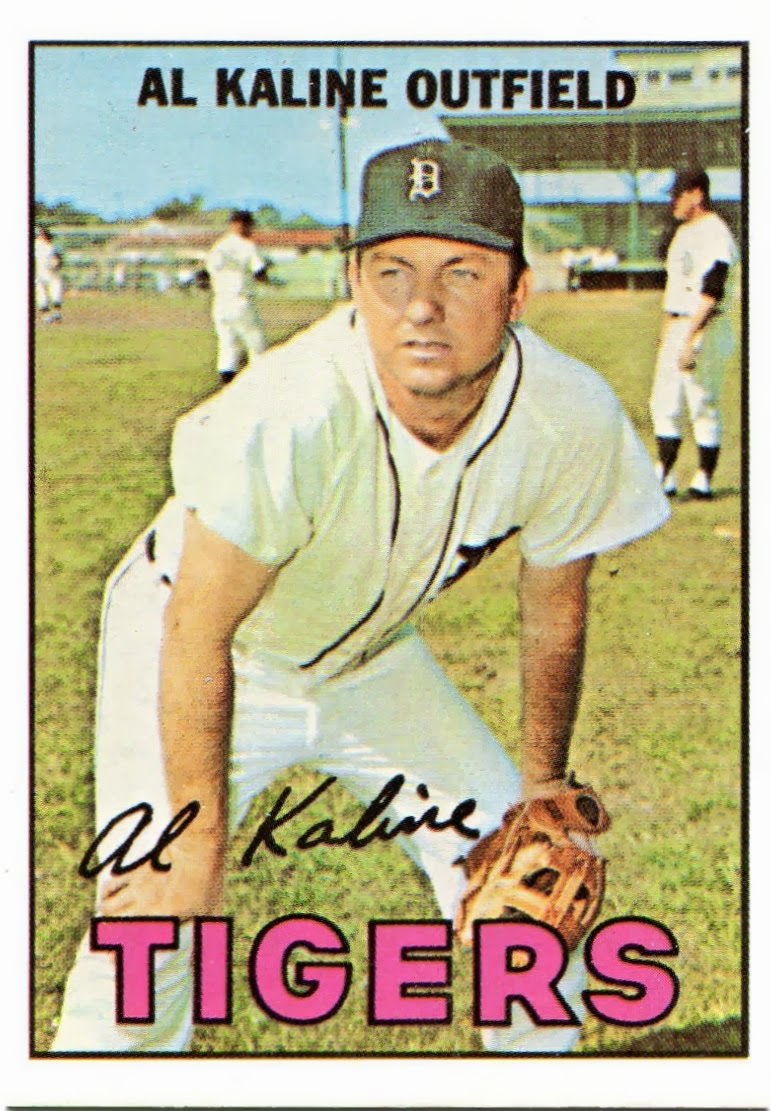 Still, it's not like I haven't trimmed cards before.

I have. I'd bet quite a few of us have done the same.

What really bothers me is when a card is just a bit too wide to fit into a nine-pocket page. It doesn't happen often, but it's not unheard of in this hobby.

Though I do own an actual '67 Topps Al Kaline, I jumped at the chance to pick up this Dover reprint from a dime box a few years ago. When I got home, however, I found that it was just a tad too wide to fit into a standard page, which bugged me.

So, I did what any normal human being would do. I cut the damn thing.

Though you can't really tell from the scan, this card is a bit smaller than it was when I bought it. Yes, I'm guilty of trimming.

Lock me up if you must. 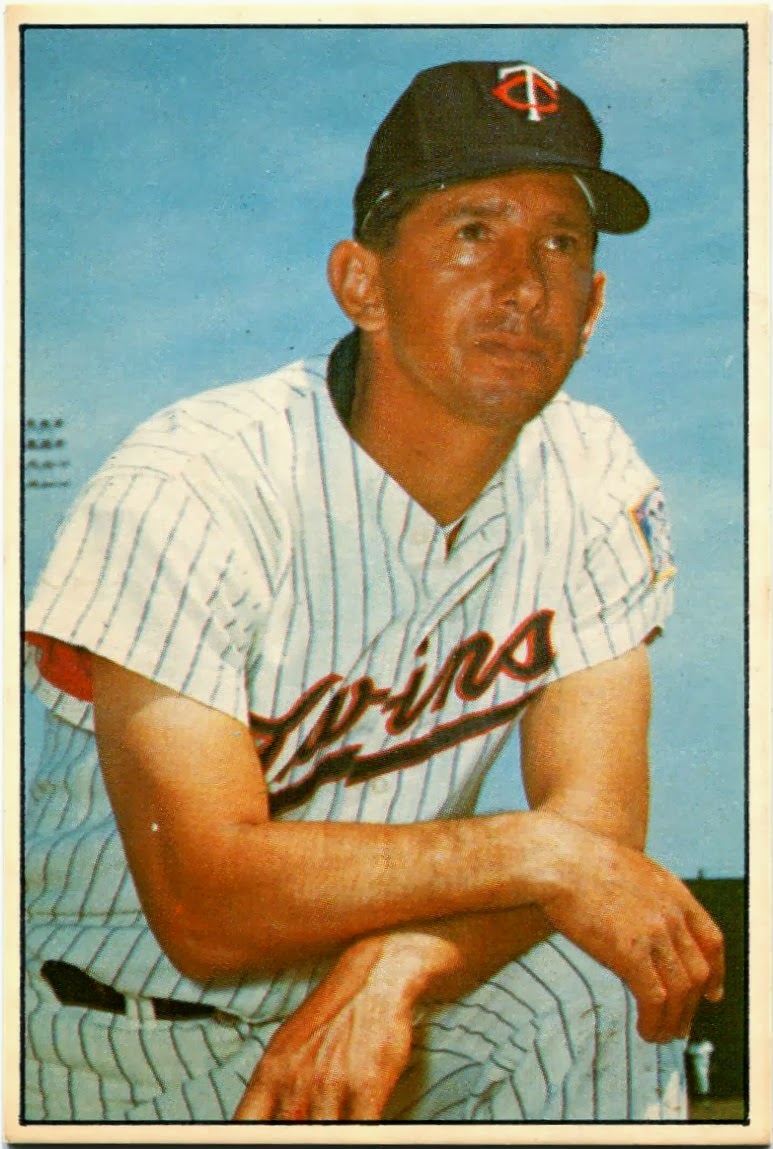 That said, I don't want to give the wrong impression.

Despite my '89 Bowman rantings and weakness for nine-pocket pages, I'm not completely against oversized cardboard. If I'm being completely honest, the majority are actually pretty nice.

Take this Billy Martin, for instance. Other than the fact that it appears to be a Twins-based release, I have absolutely no information about these oddballs. All I know is that I had to jump on them when my flea market guy had them available at 15 cents a piece a couple years back.

They're similar in proportion to '89 Bowman, in that they're taller than your normal pieces of cardboard. Maybe I shouldn't like them all that much, then.

Still, I find it hard to not enjoy anything that features Billy Martin.

But that's just me. 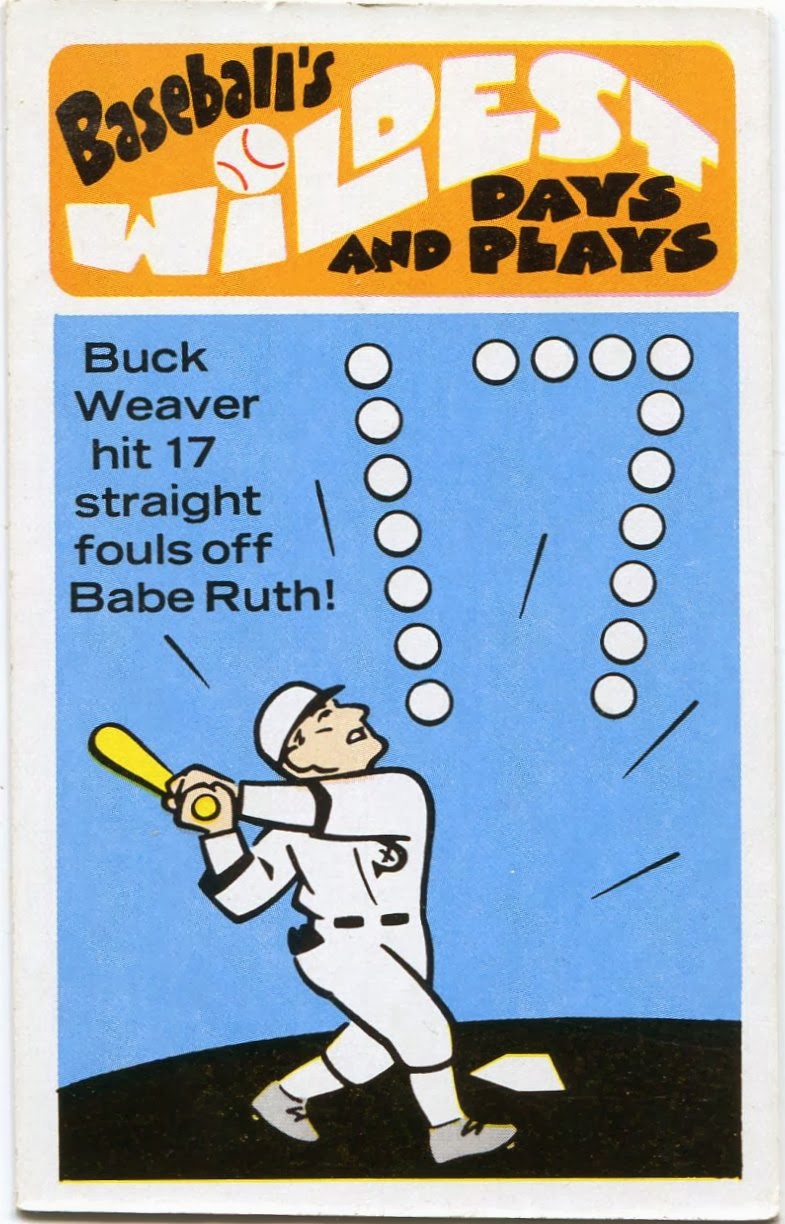 These oddities are taller and wider than your standard baseball card, which makes storing them in a standard nine-pocket page an impossibility.

Though I'd gladly accept any extra eight-pocket pages out there, I've never felt compelled to actually go out and chase some down.

So, if these are too big for a binder, what happens to them?

Long ago, I decided that any card that couldn't fit into a nine-pocket page would be separately featured in my room/man cave/card shrine. As some of you saw during my "grand tour", pieces like these are proudly displayed on bookshelves and dressers around my man cave.

They're among the first things I see when I walk into my room each day.

Though I've never been a big box buster, some of my rare breaks in the past featured what people around the hobby like to call "box-toppers".

Even though I was a broke high school senior at the time, I somehow got my hands on a box of Topps Heritage in 2010. The first pack I opened just happened to be the box-topper, which resulted in this Ryan Zimmerman/Adam Dunn combo piece.

It's probably about as wide as three or four standard-sized cards put together. I'm not sure there's a kind of page out there that could house this thing. That doesn't much matter to me, though.

I don't know about you, but I think this thing is awesome. 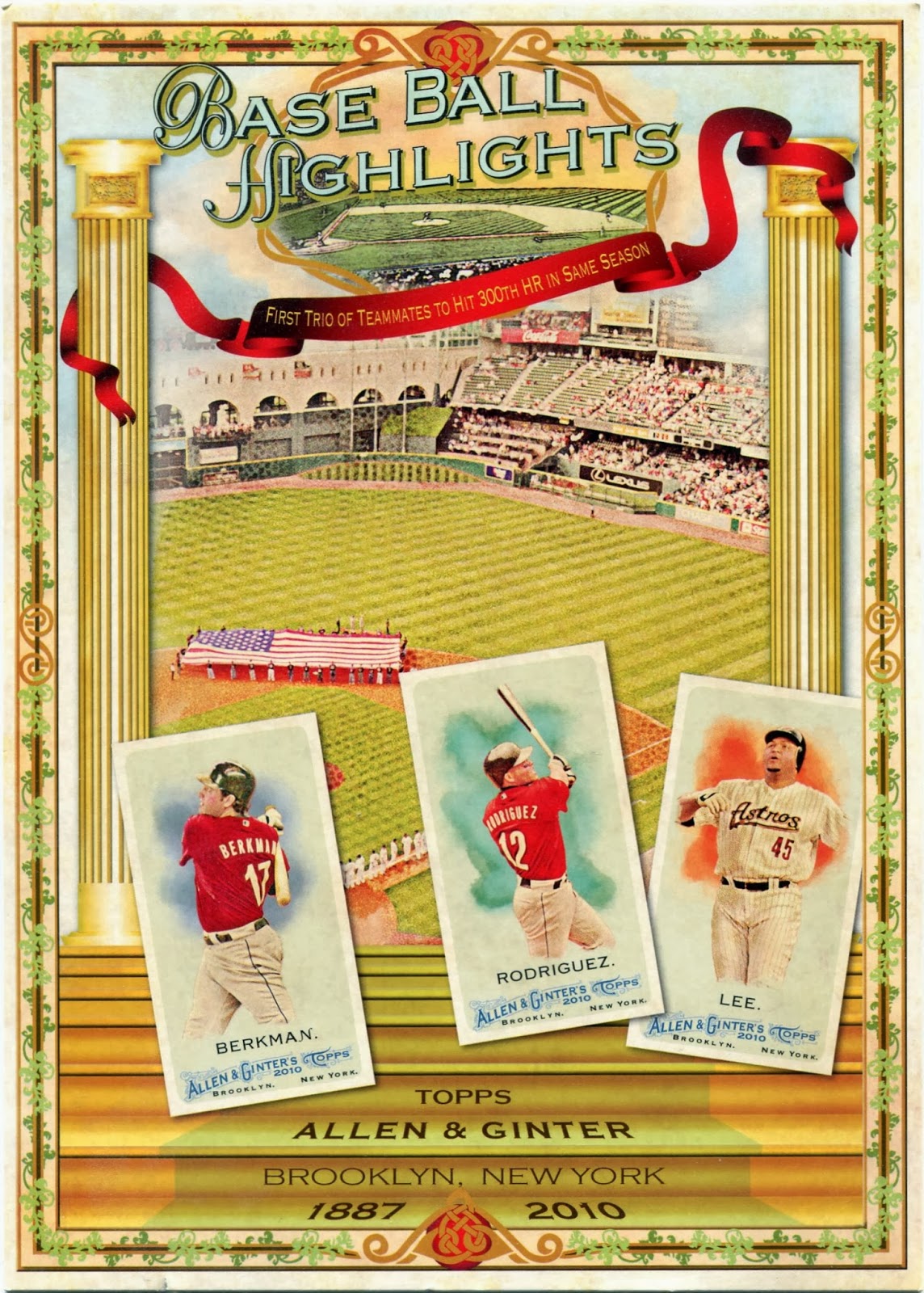 I was lucky enough to win three of these A&G box-toppers in a trading forum contest during my pre-blogging days.

If you can't tell from the scan, this thing is gigantic. You could probably fit six regular cards into it. But I'll be darned if this isn't one amazing work of art.

The people at A&G commemorated the fact that Lance Berkman, Ivan Rodriguez, and Carlos Lee all hit their 300th career homers with the 2009 Astros, something that'd never happened before in baseball.

Featured are three "custom" A&G cards that don't actually exist in any other form, complete with a striking backdrop of Minute Maid Park.

Although I do wish they'd do away with that hill in center field. 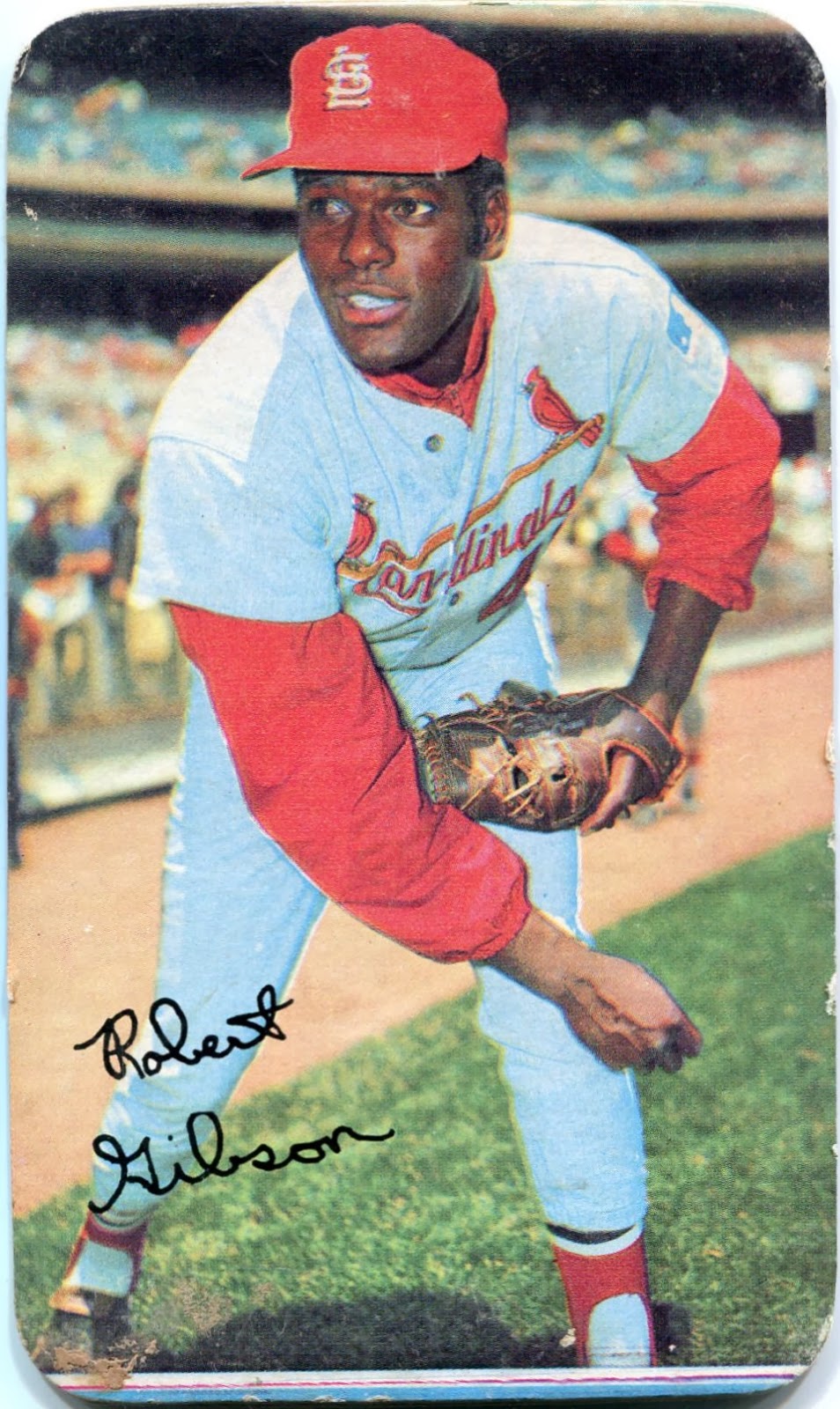 I've added a couple of these vintage Topps Supers to my collection in recent months.

I doubt they'll be the last.

While I never intended on owning any, I've fallen in love with Topps Supers lately. Though they were produced by Topps, I tend to think of these as oddballs. And you know how much I love those.

I think the scan gives off an idea of just how big these things are. Still, they're not just tall.

They're thick. You could probably whack them against your kitchen table a dozen times and leave nary a scar.

Though I wouldn't recommend doing that. 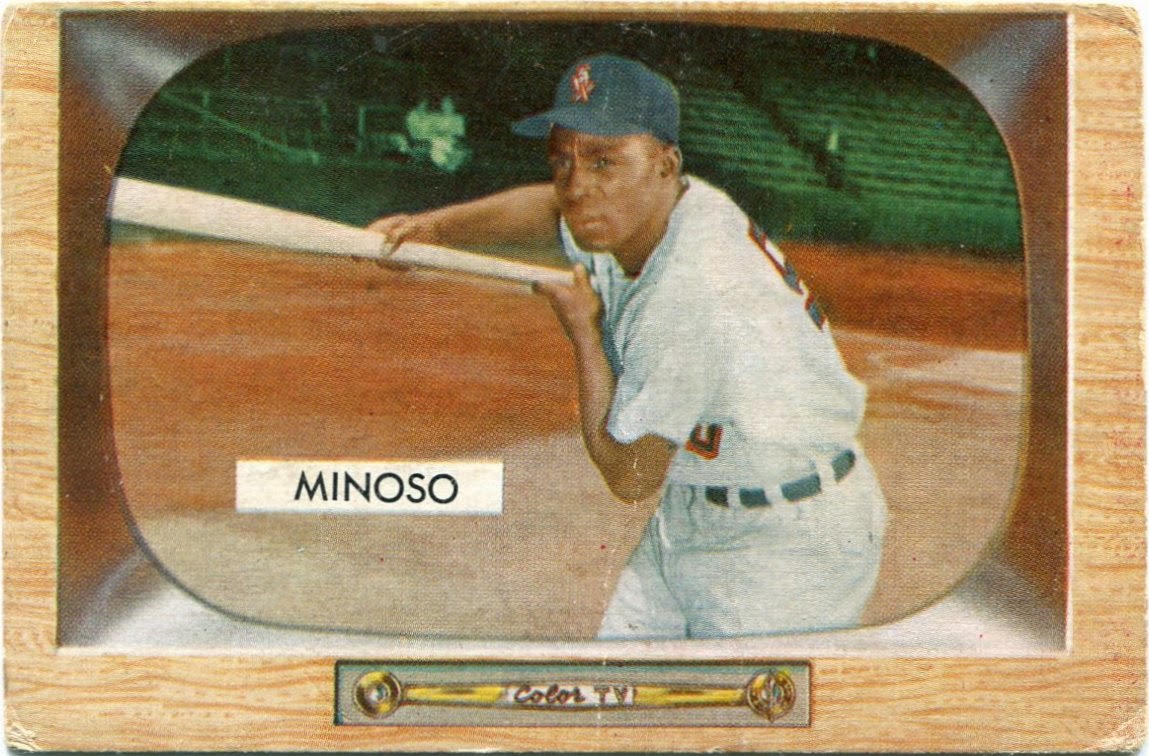 Let's not forget that every Topps set before 1957 (excluding '51) was what we'd now call oversized, by the way.

The same goes for 1955 Bowman, one of my personal favorite releases in the history of baseball cards.

Despite their oversized quality, there's nothing ugly about these.

Due to my '89 Bowman-bashing and binder-loving rants, I apologize if I made it seem like oversized cards were the work of the devil.

That couldn't be further from the truth.

There's room for cards of all shapes and sizes in this hobby.
Posted by Nick at 5:03 PM

I think your gonna have to bite the bullet and search out some 8 pocket pages.

a 1980 topps super entered my collection recently. 5 x 7. at some point it's no longer a card, right?

That billy Martin is from the 1978 twins frisz set. I just picked up a jimmie hall card from the set and was surprised to see that it was oversized.

Outside of storage issues, I undeniably... absolutely... and whole heartedly love oversized cards (including 89B). You just reminded me that I need to add one of those Heritage stamp box toppers to my collection.