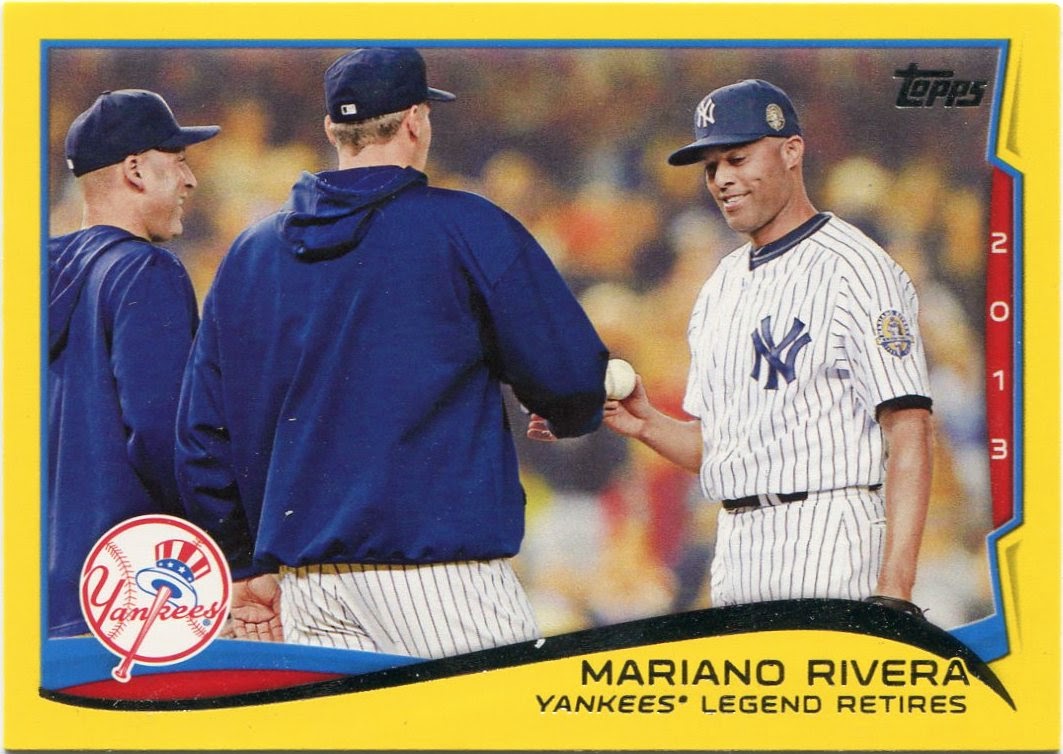 As of this writing, I'm knee-deep in organizing last week's card show finds.

My sorting methods probably take up a bit more time than most other collectors. As I've mentioned before, I organize my cards by team and then by position. Every time I look through my Angels binder, for instance, I get to see the history of their franchise, position-by-position.

In many cases, my ways of organization have forced me to take a deeper look at baseball cards as a whole. One thing I've often wondered over the years is which position has the greatest cards per capita.

I doubt it's anything you can accurately quantify. Still, seeing as how I've been sorting my cards by position for more than a decade, I think I have enough experience to speak on the matter.

Luckily for me, I recently received a great package of goodies from Oscar of the terrific blog "All Trade Bait, All The Time". Though I doubt it was his intention, he sent along a nice mix of positions as well.

In a rare move for me, I specifically asked for this yellow Mariano Rivera parallel when Oscar posted it on his blog.

Pitchers probably have the most variety in terms of photo selection. The majority may be standard windup shots, but I also have cards that feature hurlers fielding, attempting a pickoff throw, or even at the plate.

Mound conference shots sneak in from time to time as well, though I've never seen one quite like this. In a highly emotional moment from last year, "Mo" is seen here being taken out of his final game by longtime teammates Derek Jeter and Andy Pettitte.

It's definitely a one-of-a-kind pitching shot. 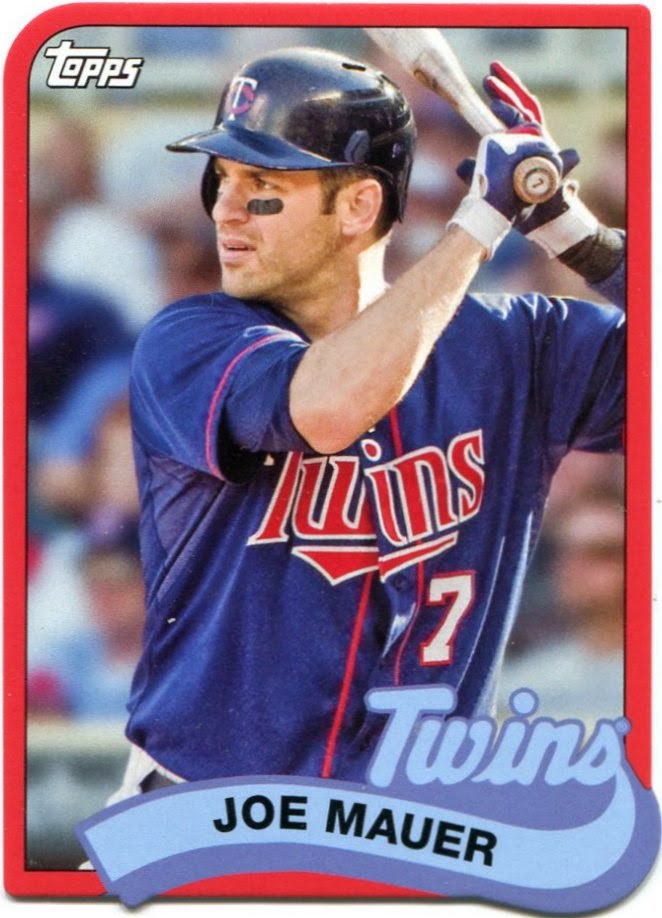 The other half of a baseball battery often receive some pretty neat cardboard as well.

This Mauer mini was the second and final card I specifically requested from Oscar. I love this year's 1989 minis, but others seem to hate them. There doesn't seem to be any middle ground on these, either. They're very polarizing minis.

If I were to look through my Mauer collection, chances are you'd see a fairly decisive split between standard hitting shots like this one and others that feature him in his catching gear.

While this is a great card, I prefer the tools of ignorance. 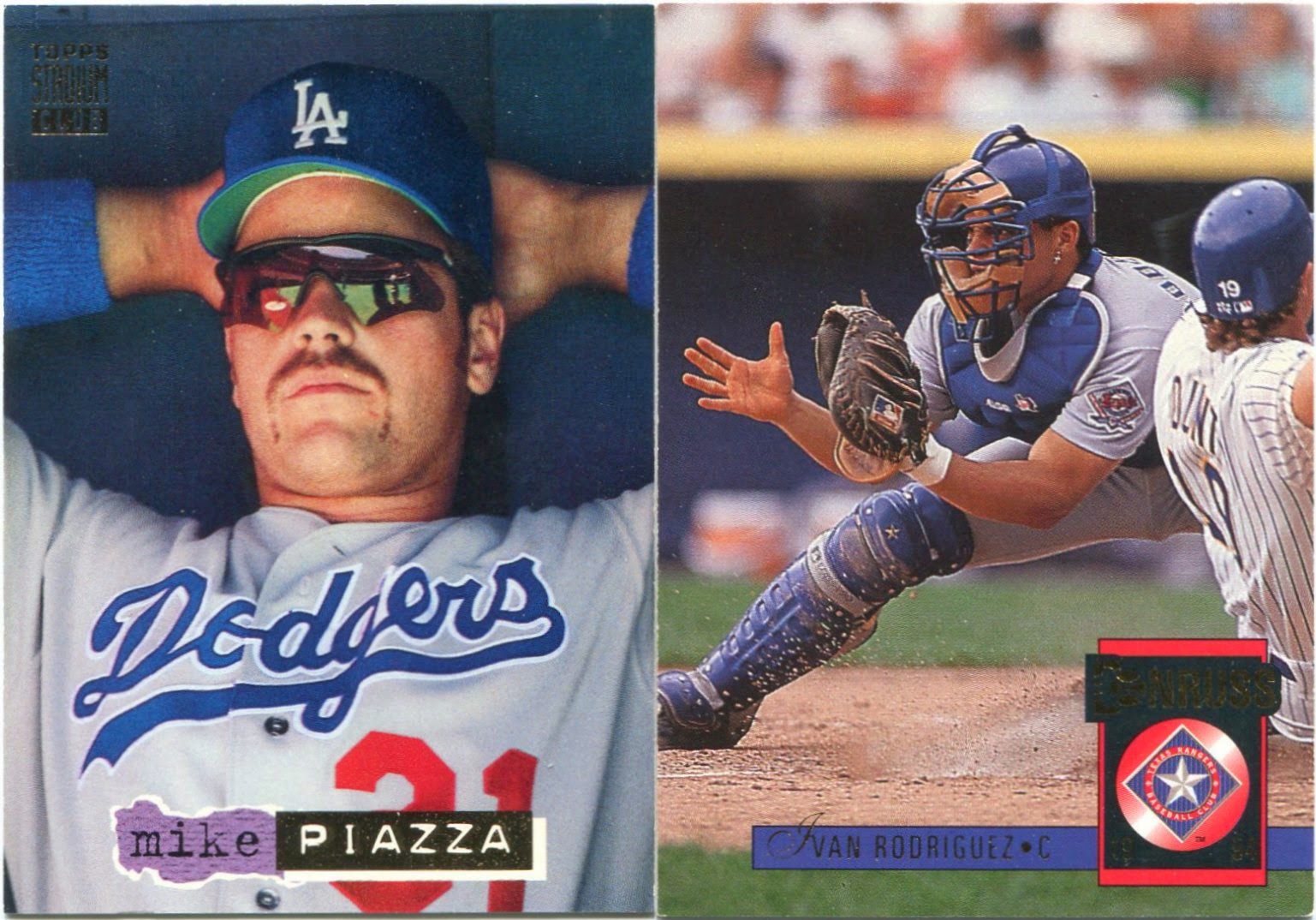 Though the "Mo" and Mauer would've been more than enough, Oscar kept on going.

He sent along a couple terrific catcher-centrich cards with these two.

Backstops probably have the best action-based photos, as you can see with that terrific "Pudge" play at the plate.

I guess players of any position could receive one of those "chilling in the dugout" shots, but there seems to be a certain special aura with a lot of the catcher cards I receive.

I'm not sure what it is, but I can see why some people devote large parts of their collection specifically to backstops. 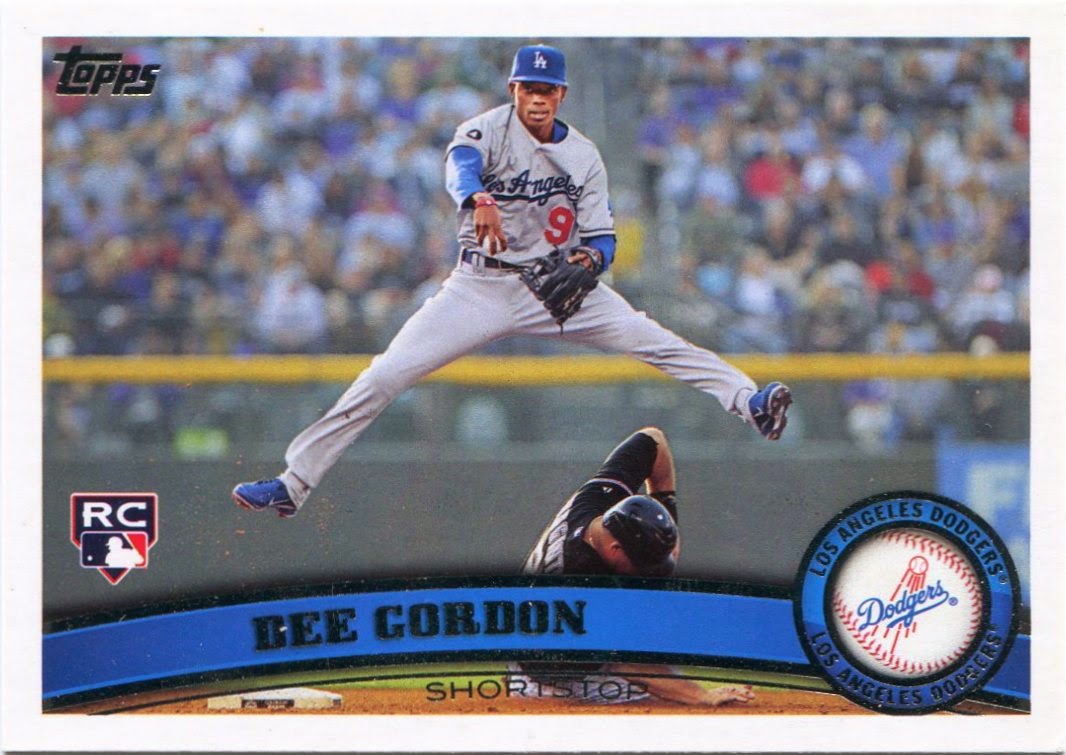 Infielders see their fair share of action as well.

There's a ton of great cardboard out there of first and third basemen, but middle infielders have what I like to call the "Double Dip Advantage". (Okay, I just made that up right now.)

Double plays are sometimes turned at first, third, and home, but I can't recall seeing one featured on a baseball card.

Most "double dips", of course, take place at second base. That's why shortstops and second baseman have the advantage in that department.

Dee Gordon may still have the ball in his hand here, but this beauty still qualifies for my double play mini-collection nonetheless.

I can't believe I didn't already own a copy of it before Oscar came along. 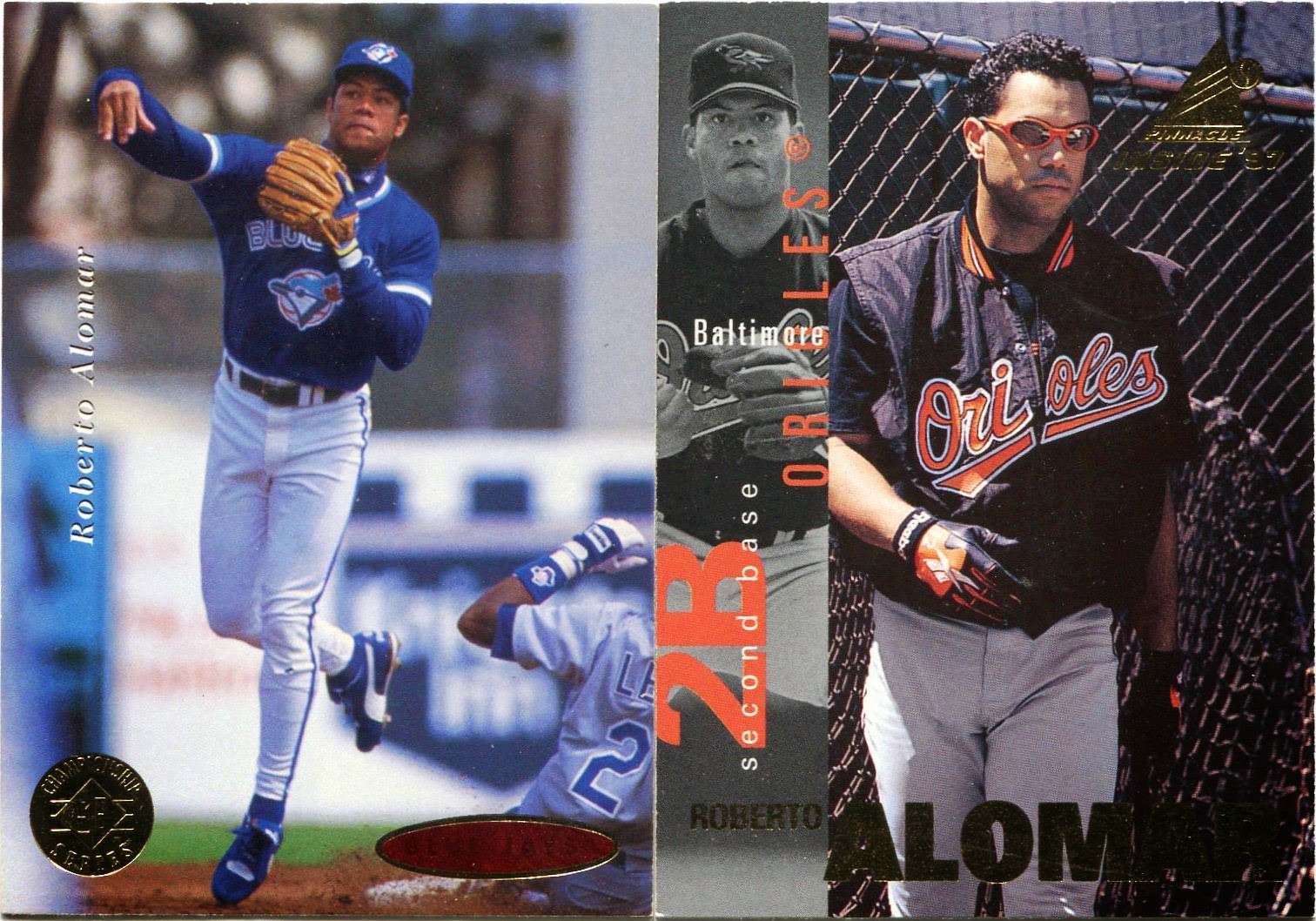 As I said, second baseman often get into the "double dip" action as well.

If Roberto Alomar is any indication, they can also sport some interestingly goofy shades sometimes. 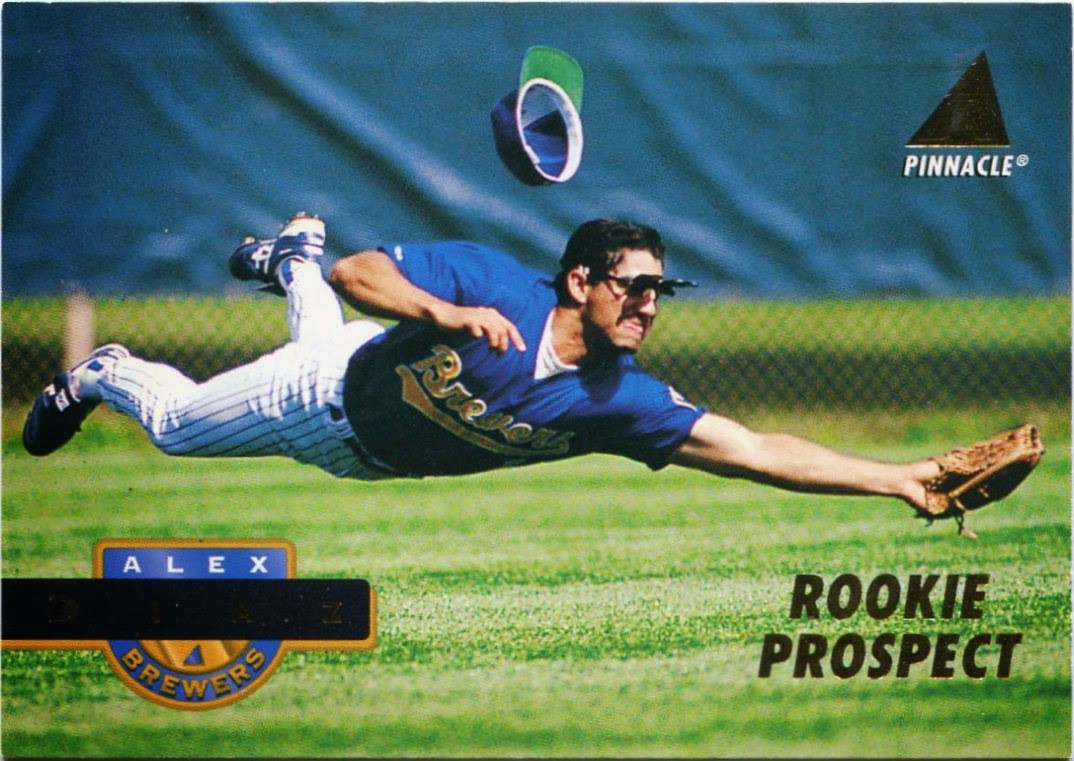 Let's not forget the outfielders.

There's more room to roam in the gaps of a baseball field, which sometimes gives outfielders an advantage over infielders.

You probably won't see this great of a catch displayed on a card of Roberto Alomar or Dee Gordon. 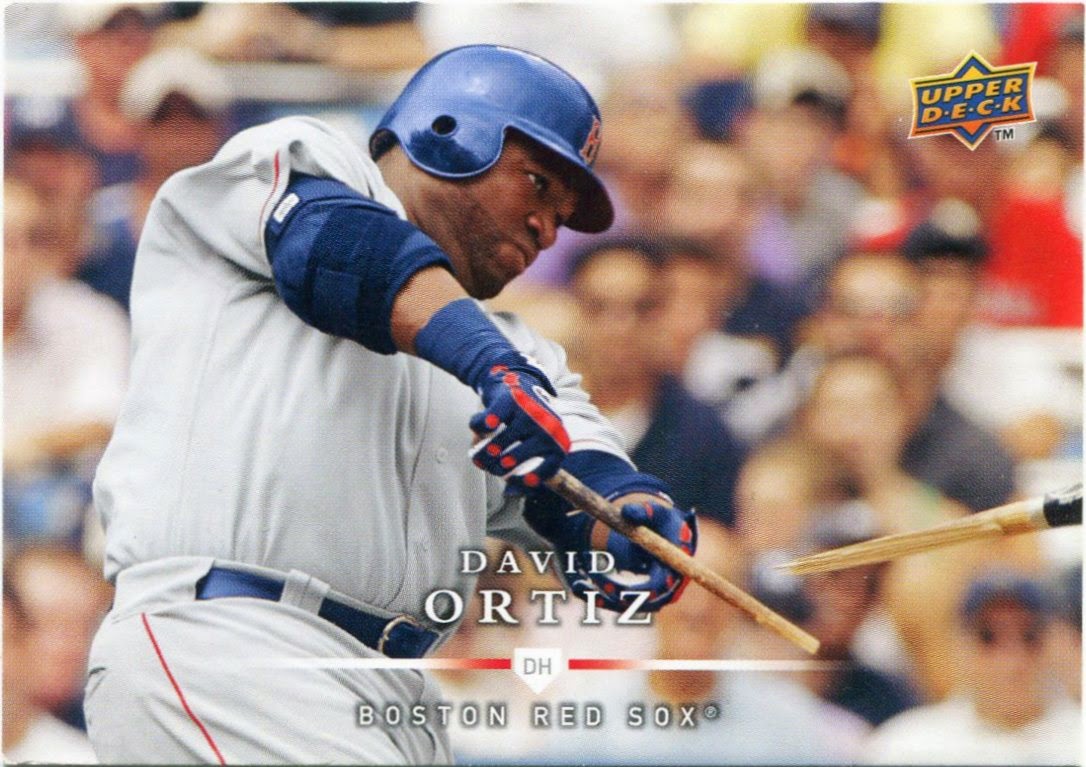 Designated hitters are limited in the photo department, since their job is pared down to...well, hitting.

They're not likely to receive any head-turning action shots in the field. You might get a good dugout image, but the vast majority of DHs have to make their cardboard count at the plate.

"Big Papi" certainly did on this one, as shown by this awesome "broken bat" shot. 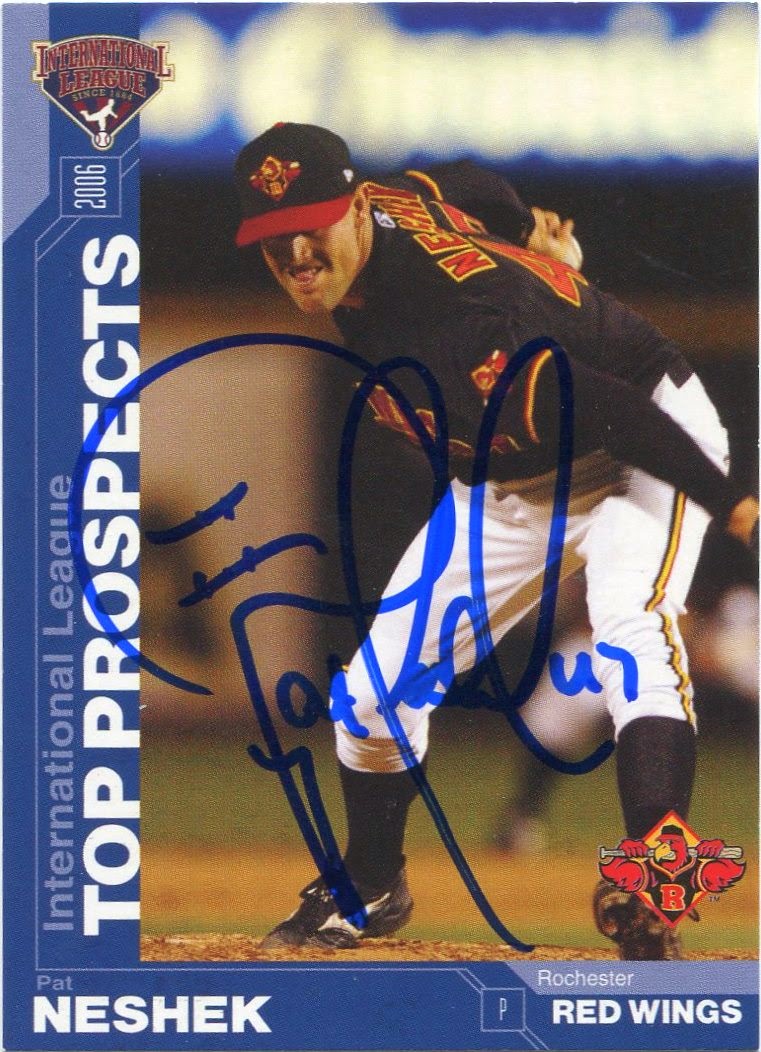 Overall, though, I'd have to say that pitchers receive the best cards of any position in baseball.

If you want to get even more technical, submariners like Pat Neshek probably receive the coolest cards of any pitchers.

Still, the neat action shot wasn't what caught my eye about this piece.

I've heard that Mr. Neshek is an avid card collector and a prolific signer, but I'd never been lucky enough to own an in-person autograph of his until Oscar sent this beauty my way.

I usually don't care one way or the other how a guy signs, but I must say that Neshek has one of the most beautiful signatures around. It beats the hell out of most of the other scribbles I've seen over the years.

Here's to all the pitchers out there, for that matter.
Posted by Nick at 5:07 PM

Great minds don't always think alike. In general, I have always considered pitcher cards on the bottom end of the spectrum only above the DH. I think the biggest problem is that there are so many pitcher cards that they all end up looking fairly similar.

Catchers have always been at the top of my list. The equipment just makes for a good visual.

The Dee Gordon card is a Coors Field shot!