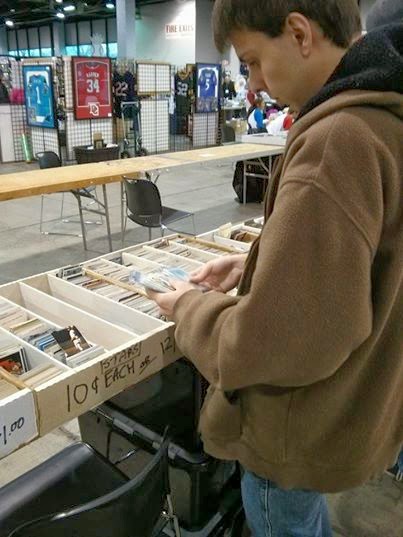 To many, the idea of a college student on spring break probably brings images of wild partying and beaches to mind.

I'd like to assure you that there's at least one person left who doesn't feel the need to partake in that type of action. Call me old fashioned, but my idea of spring break paradise is as simple as a card show.

That's exactly where I spent the waning days of my vacation this past Saturday. My dad and I were at this show for a good four hours, in fact. And, with another generous grant from pops, I think we did a good deal of damage this time around. (Thanks again, Dad!)

My dad was even nice enough to snap this picture of yours truly "in the zone" digging through some dime bin treasures. For those of you who still aren't convinced that dime boxes exist, here's proof. Maybe one day we'll plan a blogger field trip to the Midwest so everyone can enjoy a good dime box.

However, I will say that there didn't seem to be as many dime boxes at this gathering as there have been in the past. Still, the ones that were present seemed to have some real goodies.

The boxes you see in the picture above had cards priced at a dime each or 12/$1. This vendor has been at this show for as long as I can remember and always seems to have new cards to dig through.

I never know what to expect. 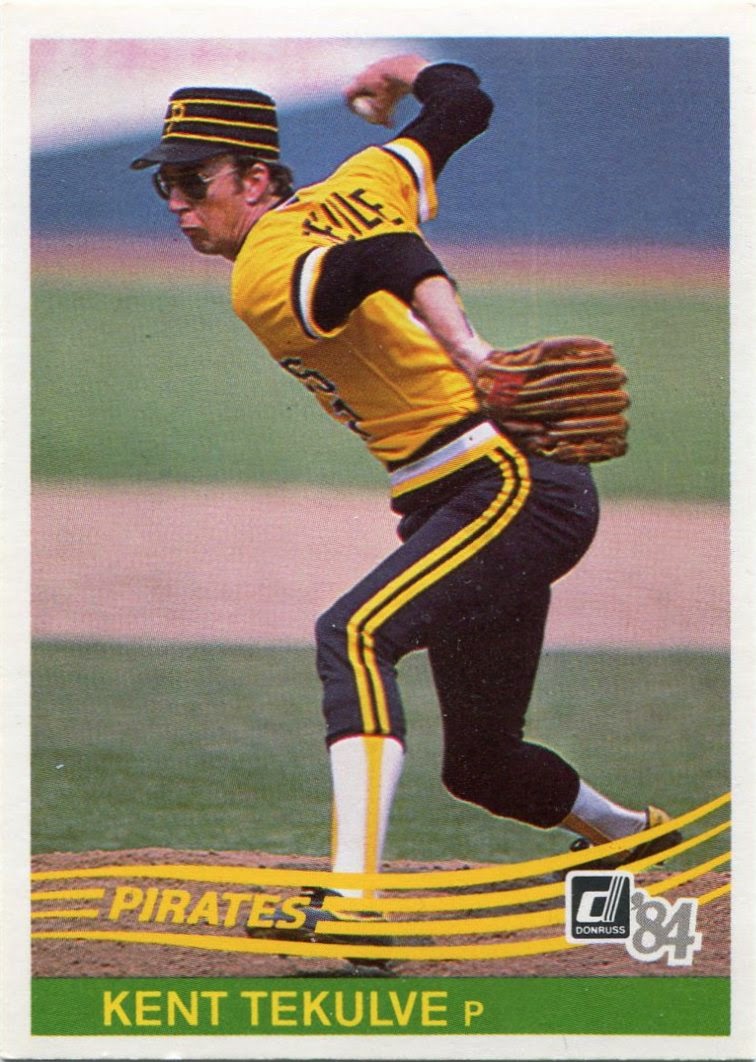 I always seem to walk away from his table with a huge smile on my face, though.

I've previously gone on record by saying that 1984 was far and away the best year in the history of Donruss. I love the nice, clean photos and the "shooting star" team names.

Trouble is, '84 Donruss isn't all that easy to find. I've heard rumors that Donruss printed less of this set than they had in the past at that point.

For that reason, I've long fantasized about an entire dime box devoted to 1984 Donruss.

And, wouldn't you know it, that's exactly what this guy had on Saturday. 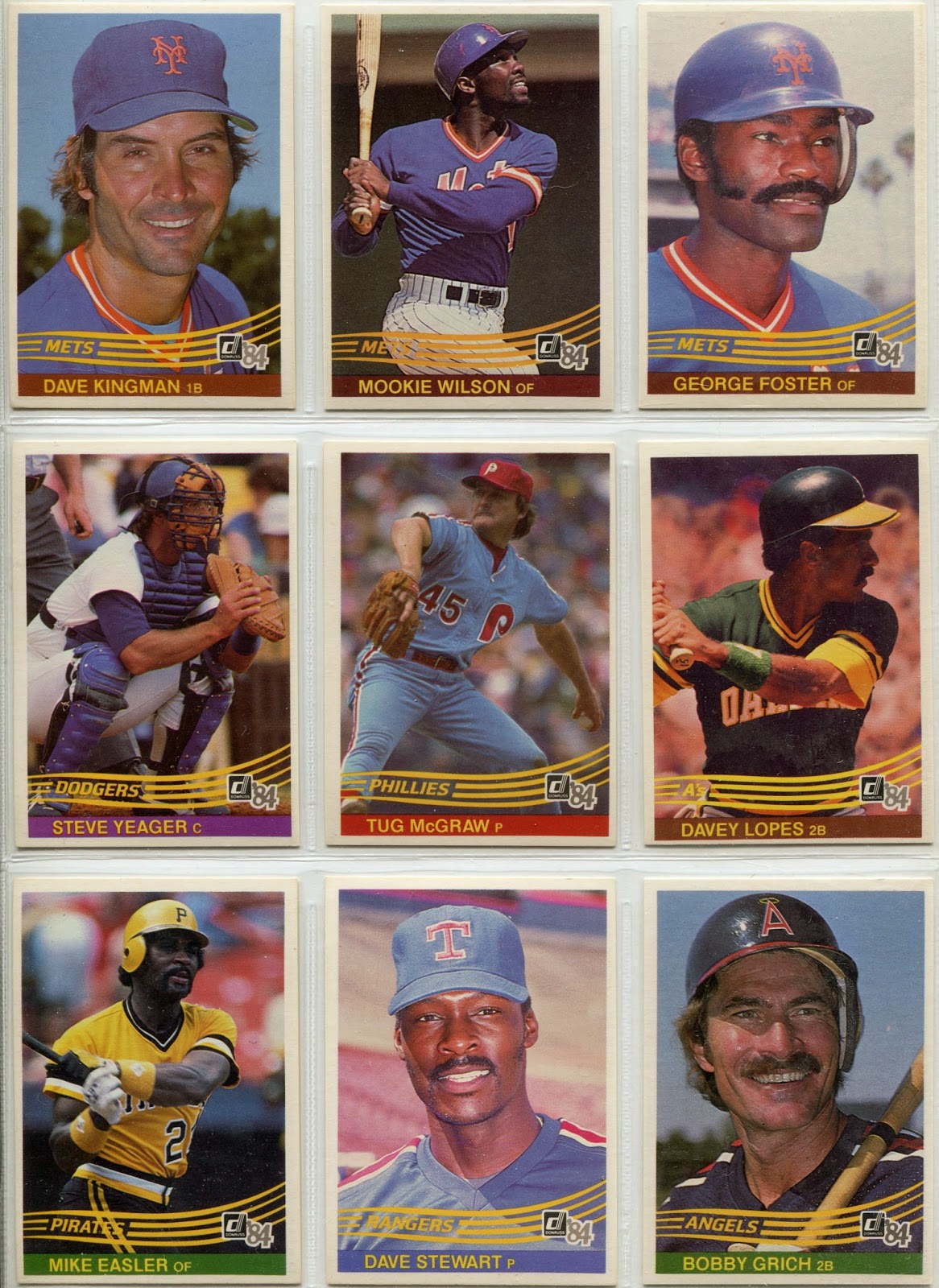 Reams and reams of '84 Donruss, as far as the eye could see.

I walked away with a few dozen of these things after all was said and done. That probably more than doubled the existing number of '84 Donruss I owned before this weekend.

I was living the dream. 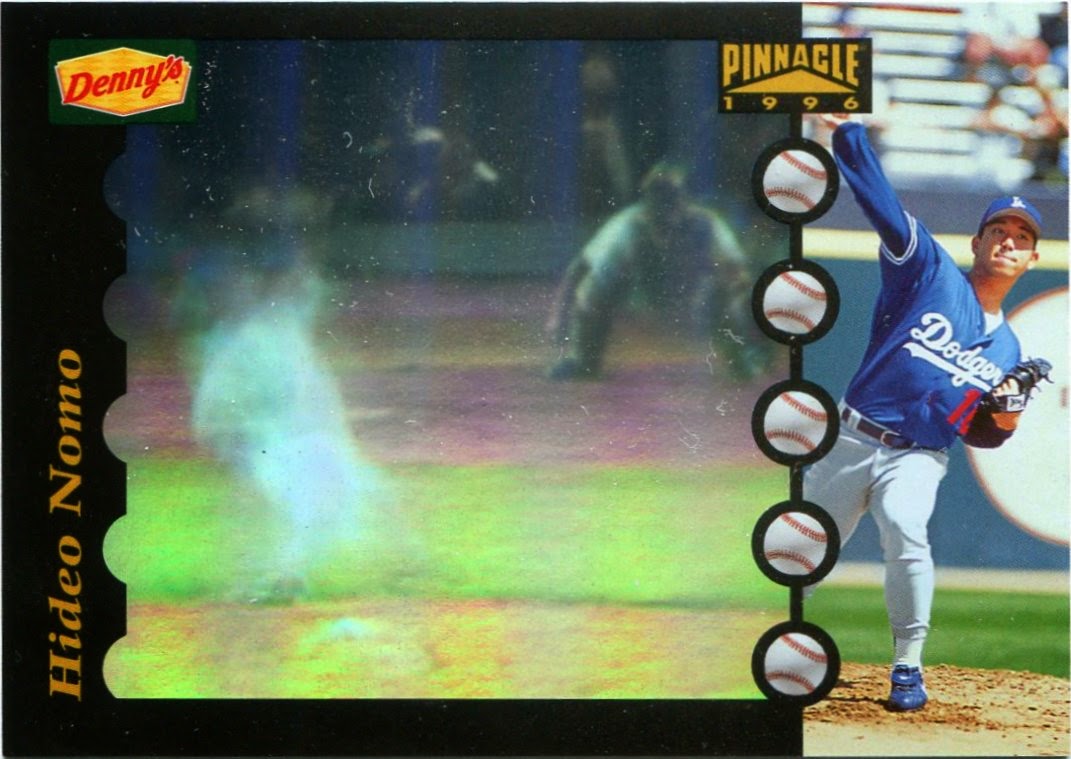 That wasn't even all I found from this guy's table.

His 12/$1 bins are usually packed with a whole bunch of good stuff. But what sets his stock apart from most other dime boxes I've dug through, however, are the oddballs.

As I've said before, I've developed a tremendous appreciation for anything and everything odd since joining the blogosphere. I try and scoop up as many oddballs as I can at every show now.

That includes wonderful pieces like this Hideo Nomo hologram, courtesy of the good folks at Denny's. 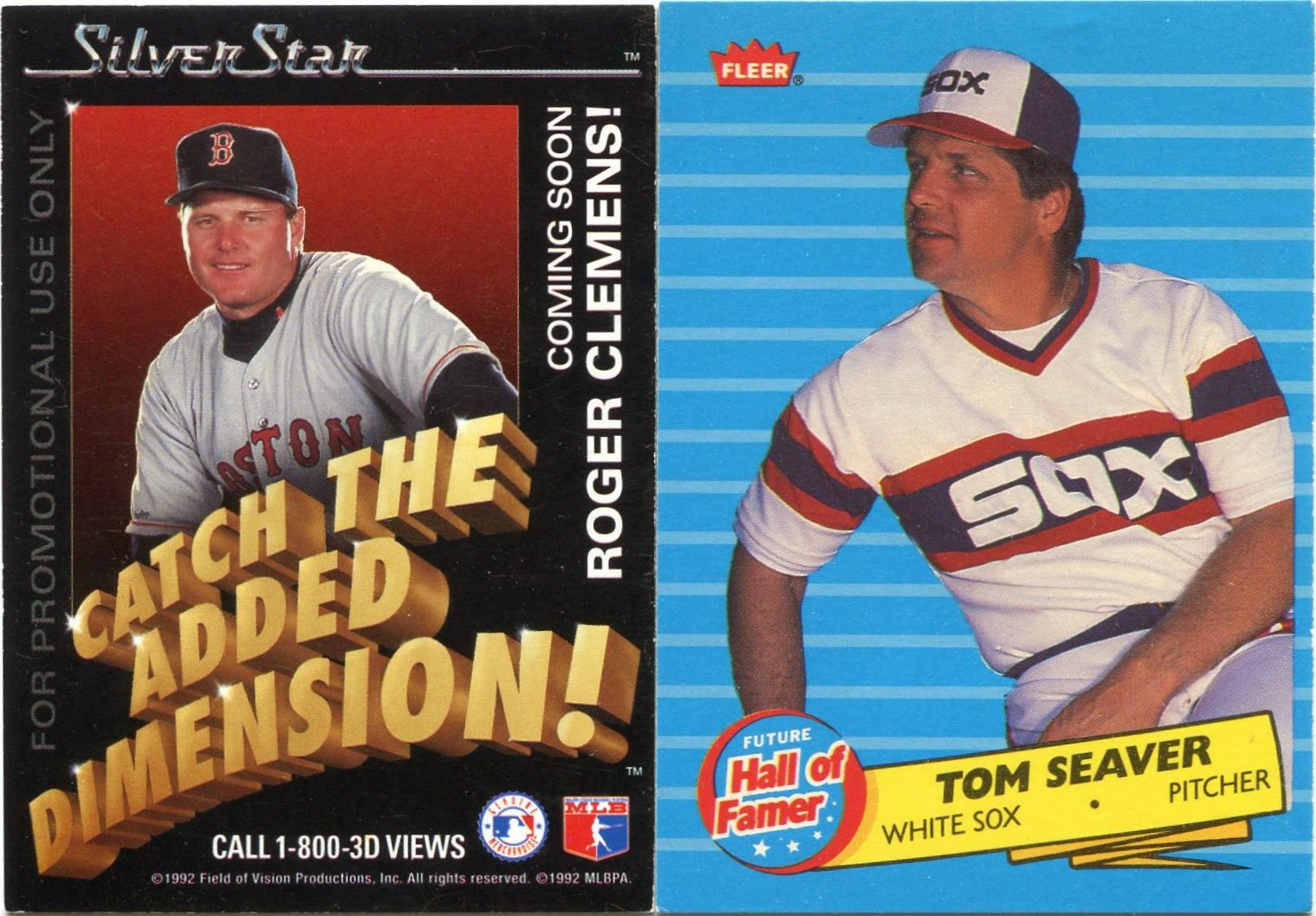 The oddballs just keep coming every time I'm at this guy's table.

He even has oddballs that weren't intended for widespread release.

You can clearly see a "For Promotional Use Only" label on the side of the movie-themed Clemens there. Still, it somehow found its way into this guy's discount bins.

I'm no Roger Clemens fan, but I couldn't pass up something like that for eight cents. 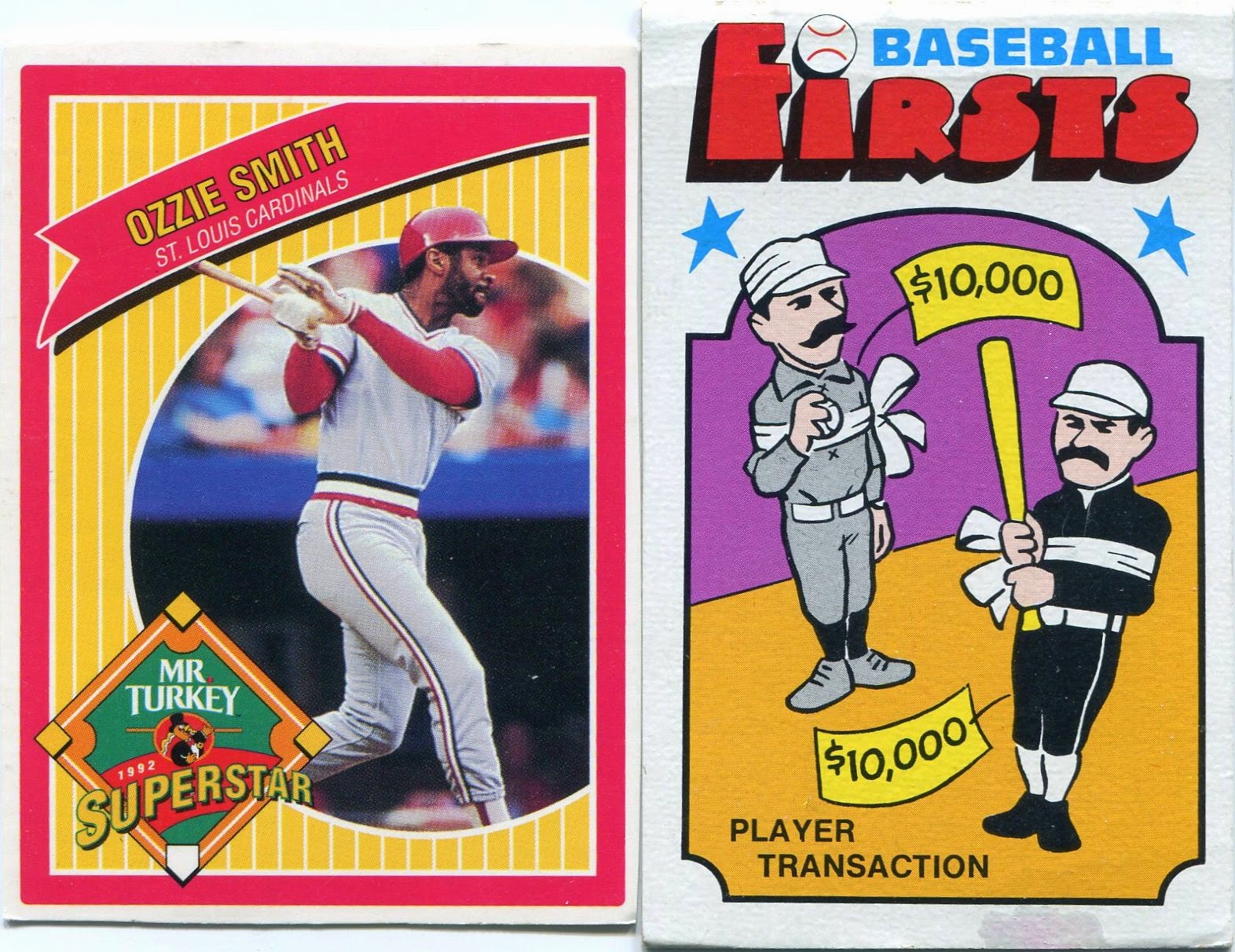 Sizes of oddballs may vary.

Neither of these will fit in any of my nine-pocket pages. I'm actually thinking about doing the unthinkable and trimming down the "Mr. Turkey" Ozzie Smith so it'll fit into my binders. 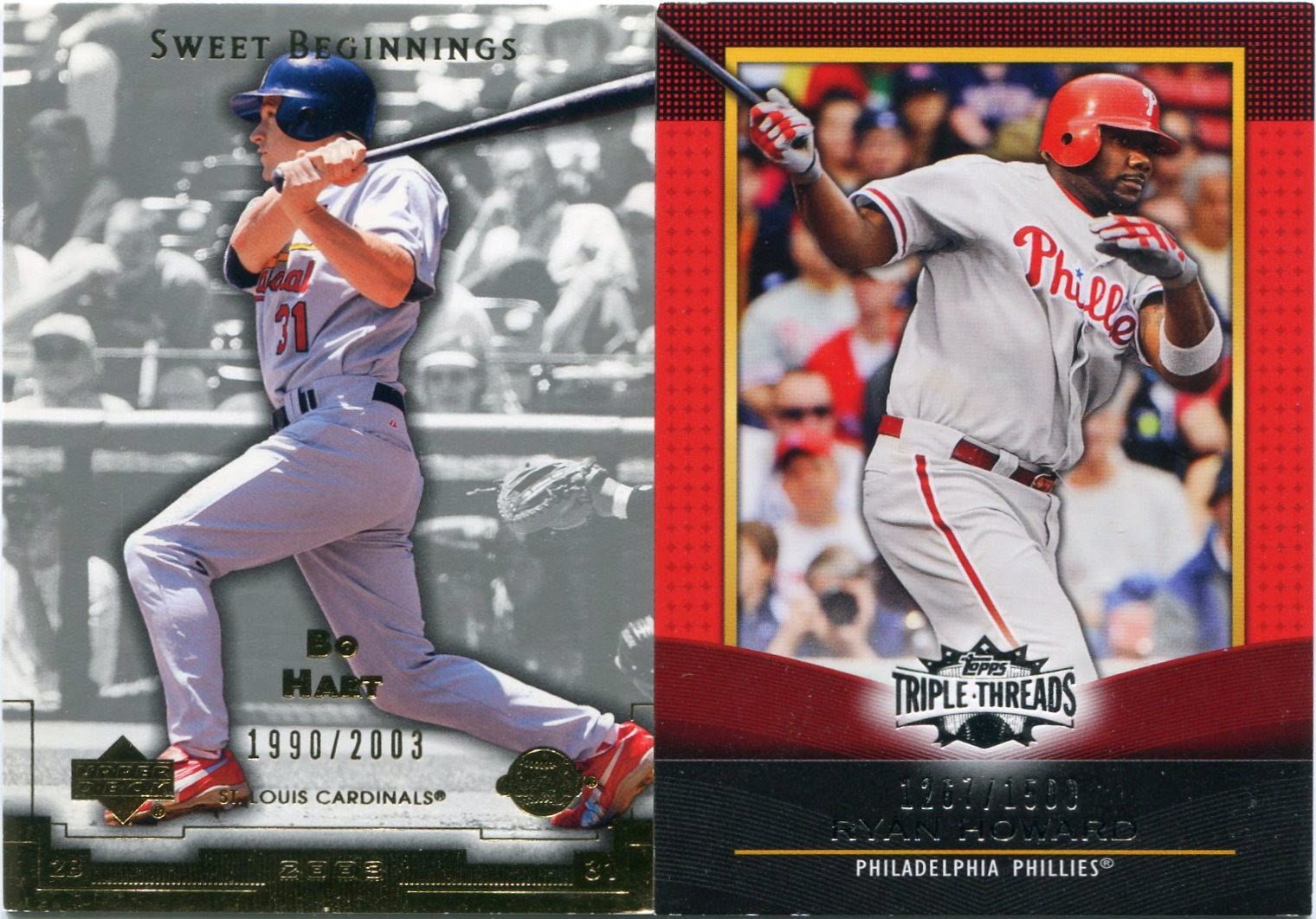 Though that guy probably had the best overall dime bins, I nabbed a ton of other cheapies from various vendors throughout the day.

Numbered dime cards aren't exactly common, but you're sure to come up with at least a few with a little digging. The Hart rookie even forced me to find nine other singles from what was otherwise a fairly thin discount bin. (I try to end up with even numbers when it comes to dime boxes.)

If I ever get around to making a banner for this blog, it'd almost certainly feature a Bo Hart card.

I'll do anything for him. 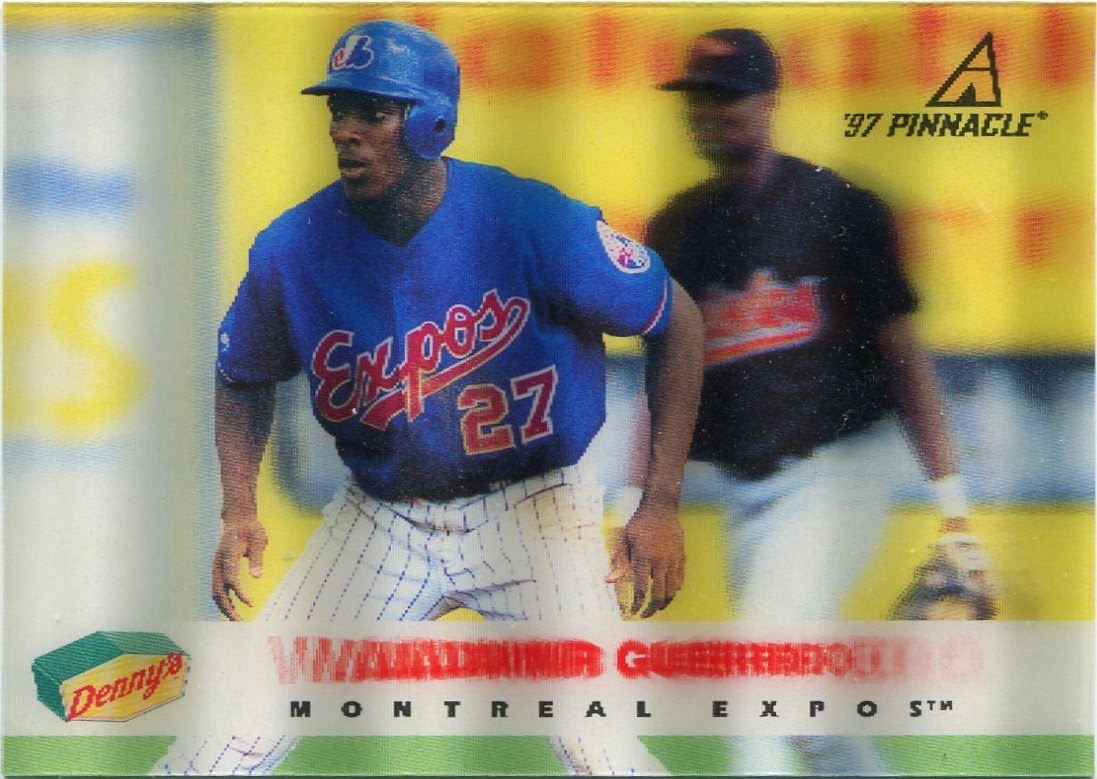 What would a card show be without Vlad?

This treasured new addition (also courtesy of Denny's) uses the 3-D technology that was sweeping the nation in the '90s market. 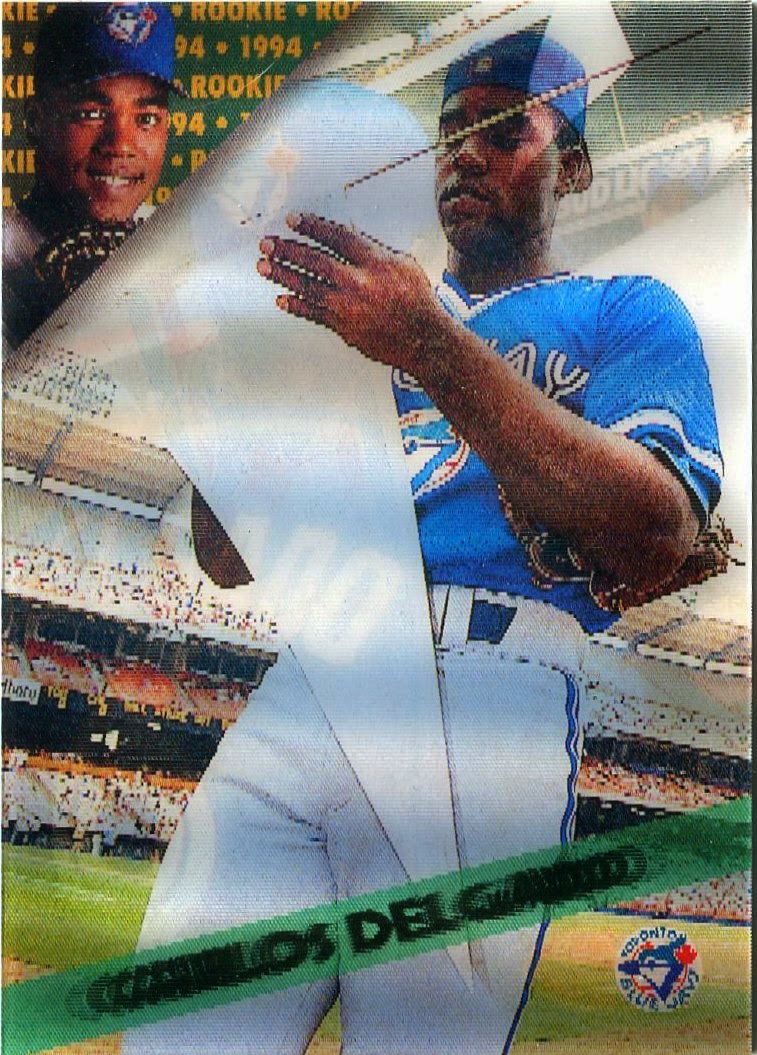 While we're on the topic, here's another 3-D issue I found on Saturday.

Because of the "autograph" shot, this Delgado is also a treasured mini-collection hit.

For any future bloggers out there, here's a neat tip I learned pretty early into my time around here. Scan your 3-D cards sideways and them flip them right-side-up.

They always come out better that way. 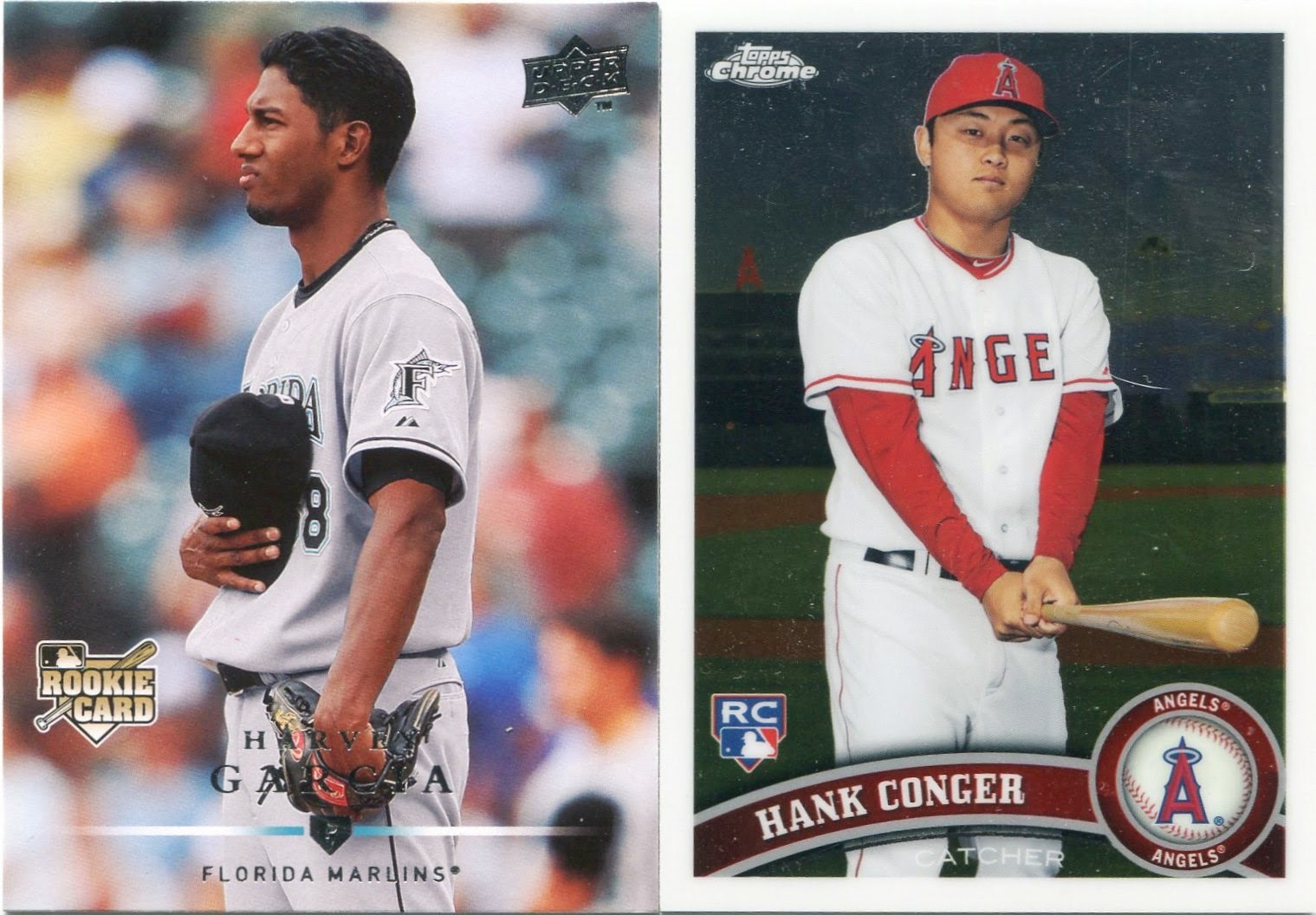 Also present in the dime box depths were hits to my "anthemic" and "bat barrel" mini-collections.

I could probably make an inappropriate joke about the Conger, but I won't. 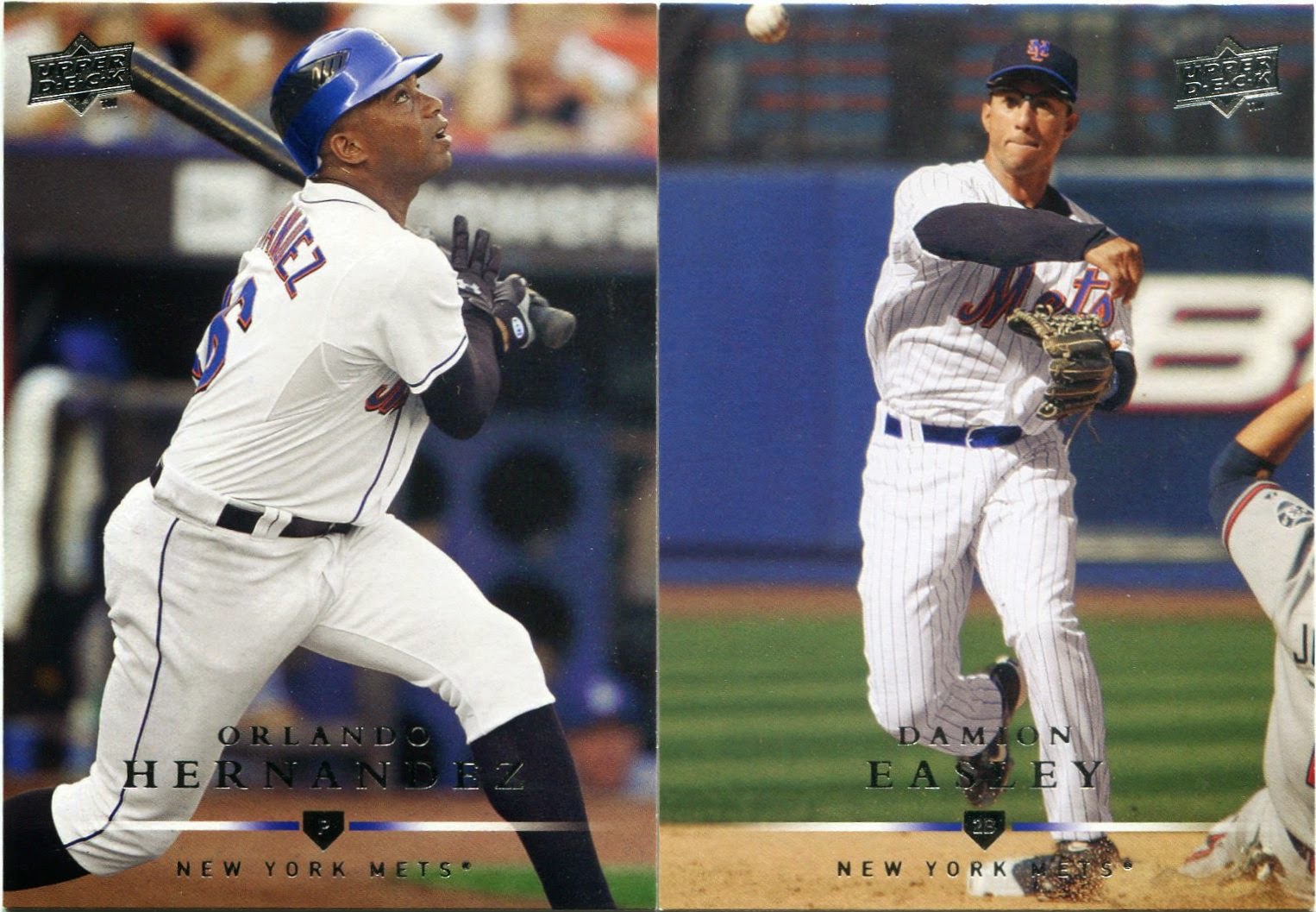 One particular dime box had a ton of 2008 Upper Deck singles available.

Though the set often gets overlooked, it really was one of the better base sets UD's history. If you've been ignoring these, you're really missing out on the fun.

As these "pitcher at the plate" and "double dip" shots might indicate, it's also a great source for mini-collection hits. 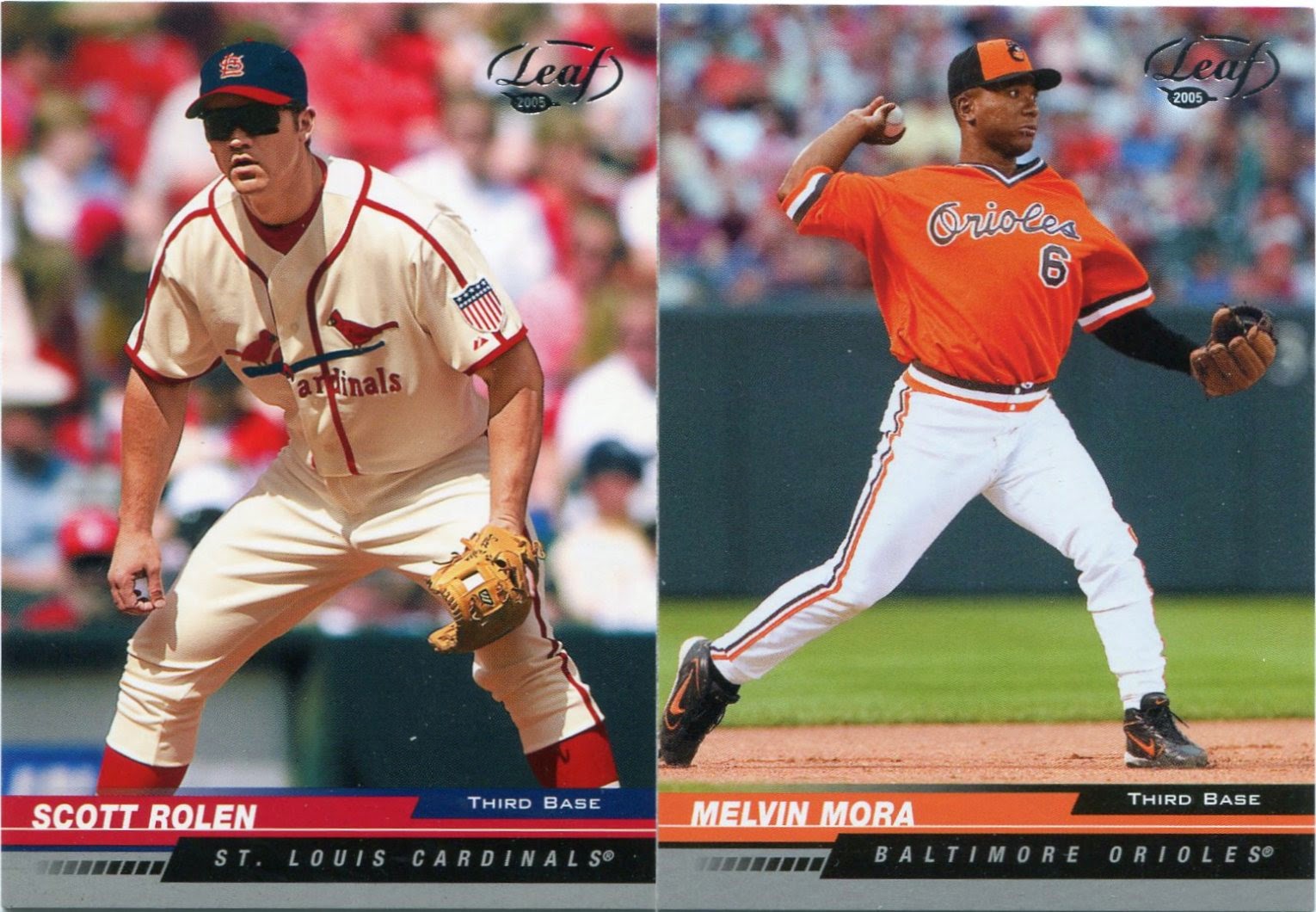 The design isn't all that memorable, but I have noticed that the set seems to feature more throwbacks per capita than any other checklist I've ever seen.

I landed a good seven or eight new "throwbacks" from just a couple stacks of these puppies. 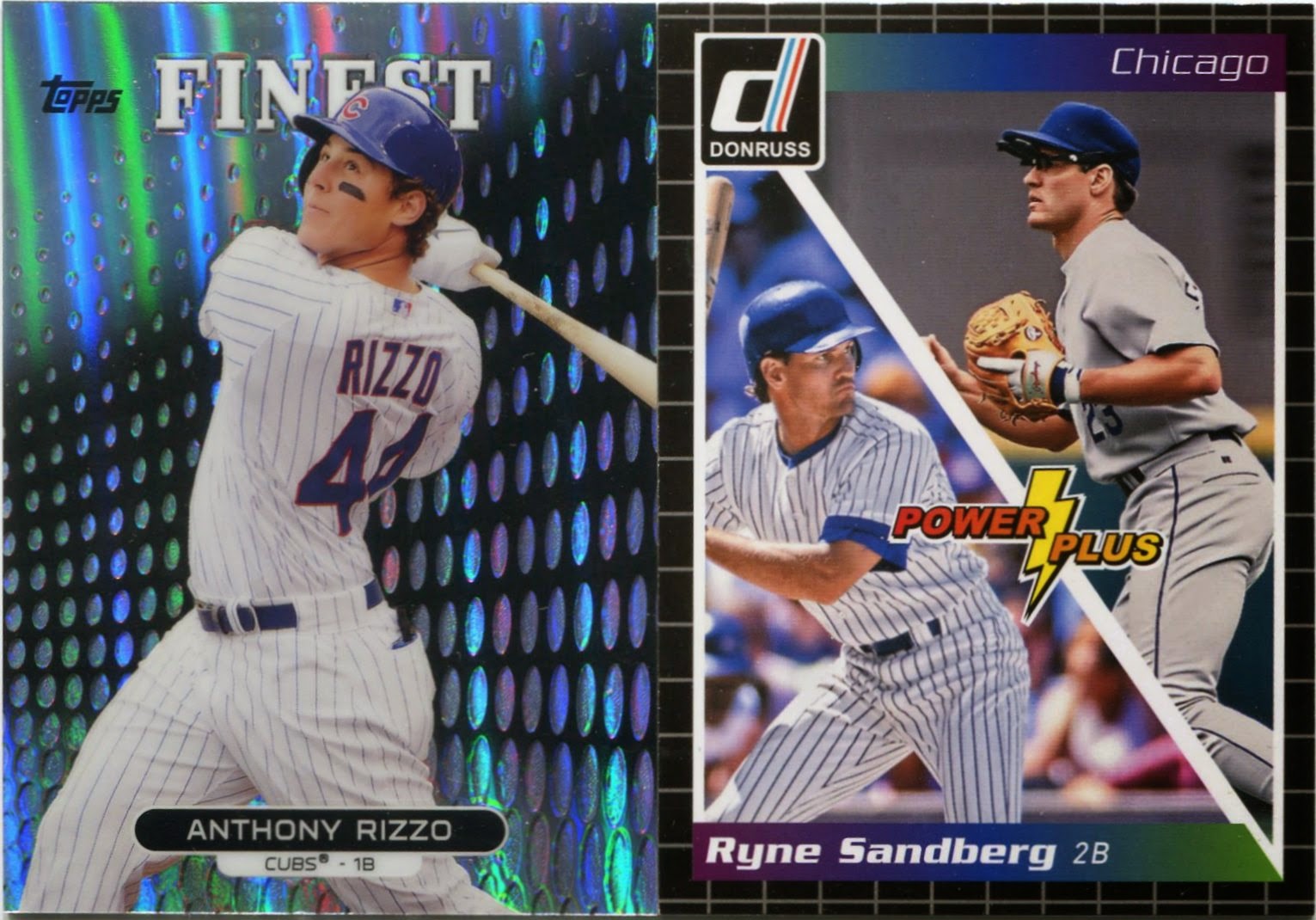 Quarter boxes seemed to be in big demand at this show.

I found quite a few more than usual on Saturday. Though I wholeheartedly prefer dime cards, the quarter boxes just kept calling my name.

I don't usually go too crazy with quarter cards since they eat up more of my budget, but that doesn't mean they can't result in a few gems.

These two neat North Side stars came from a quarter bin, although the guy basically gave them to me for free. I had 20 dimers and 15 quarter cards ready to go, but the vendor only charged me two bucks for the lot.

Though I had opportunities to pick up some 2014 Donruss throughout the day, the Sandberg was the first and only one I bought during my four hours at the show.

I'm not big on what I've seen around the blogs thus far, but I'll admit those "Power Plus" inserts are pretty cool. 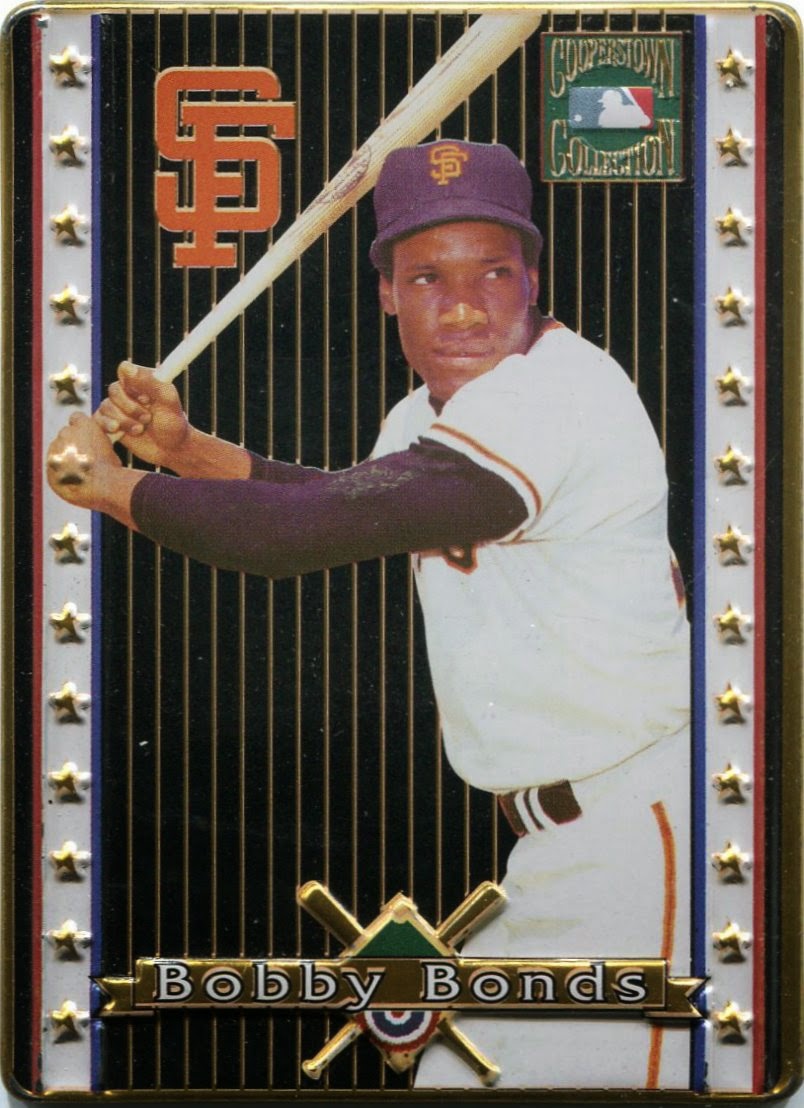 One vendor had a good dozen 5000-count quarter boxes on display.

I didn't go through all of them, but I set a limit of 20 quarter cards for myself at this guy's table. That turned into 25. And then that turned into 30. Maybe it's just me, but I find myself doing that sort of thing a lot at card shows.

One of the more interesting pickups was the Bobby Bonds you see above. It's way thicker and heavier than your normal baseball card, and it appears to be made out of tin.

I'm still debating on whether or not I should put it into my binders or just keep it as a display piece. 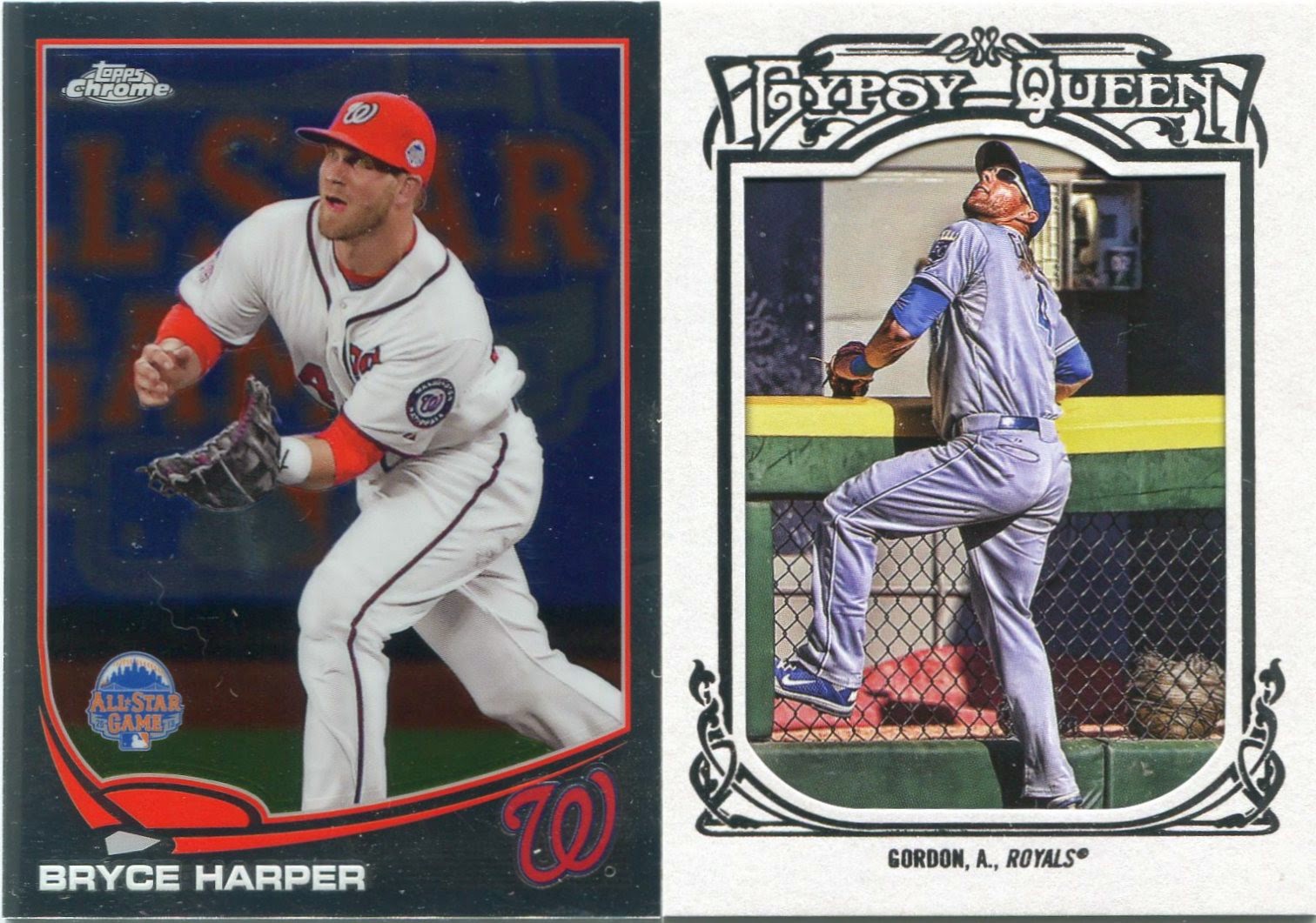 I've been wanting to pick up one of those special retail boxes of Update for a while now.

In a shrewd bit of marketing by Topps, they come with a couple special Chrome Update packs that you can't find anywhere else.

That is, unless you wait for them to show up in card show discount boxes. I found the Harper for a measly quarter.

Marketing or not, I don't know if anything can ever make me pick up another pack of Gypsy Queen. While I'm not a fan of the base cards, those beautiful framed parallels sure make it tempting.

Luckily, the Gordon came home with me for a quarter as well. 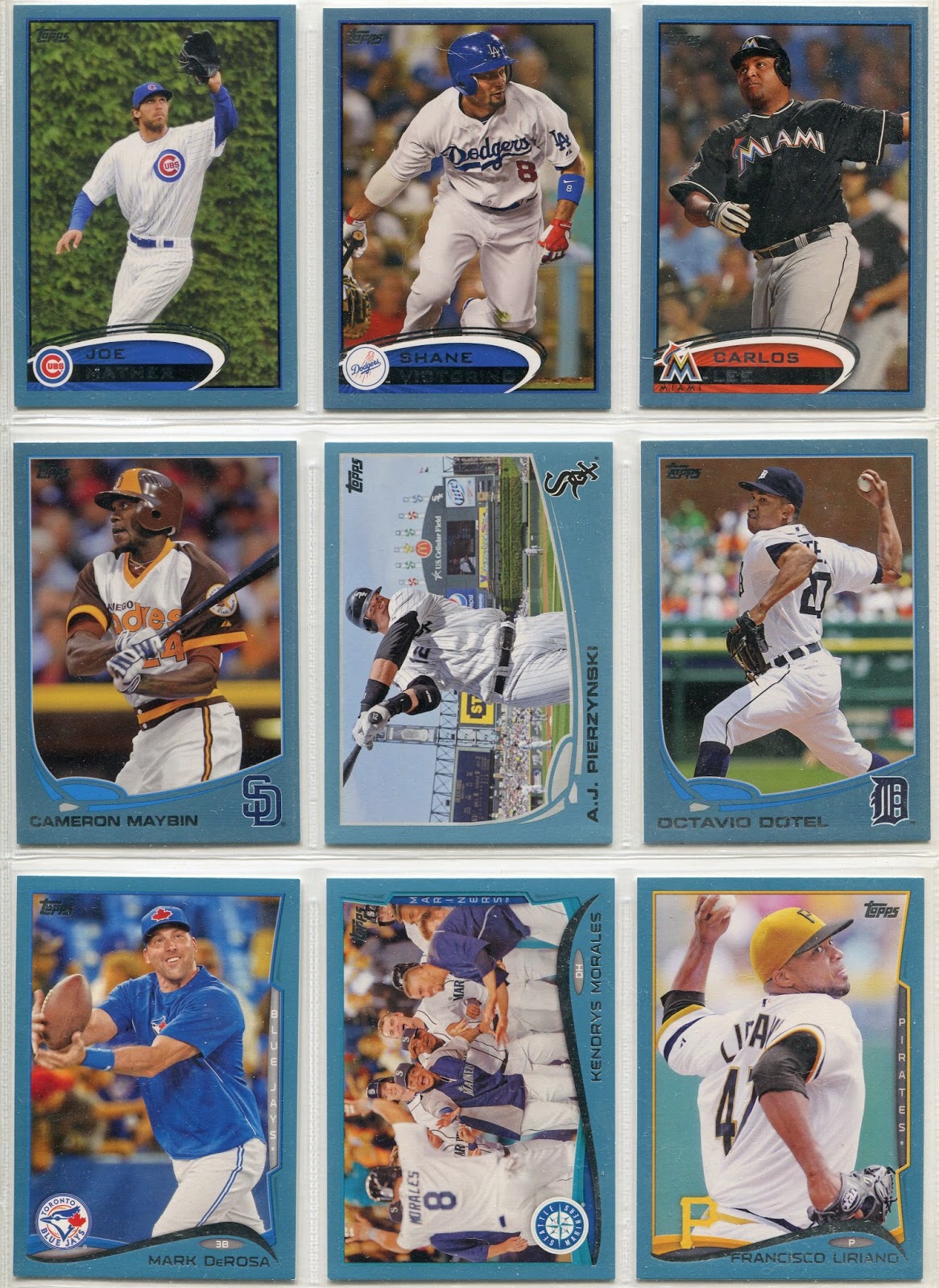 I have a confession to make.

I'm an absolute sucker for parallels.

As much as I might want to bag on Topps for making a zillion different parallels every year, they really can make for nice cards. Not to mention how cool they look in binders.

That's why I had something of a card-gasm (if there is such a thing) when I saw a stack of blue Flagship parallels during one of my quarter box digs. Blues from of each of the past three years of Topps were present, and couldn't resist plunking down a few quarters for some of the best ones.

I think there's a little parallel mania in all of us. 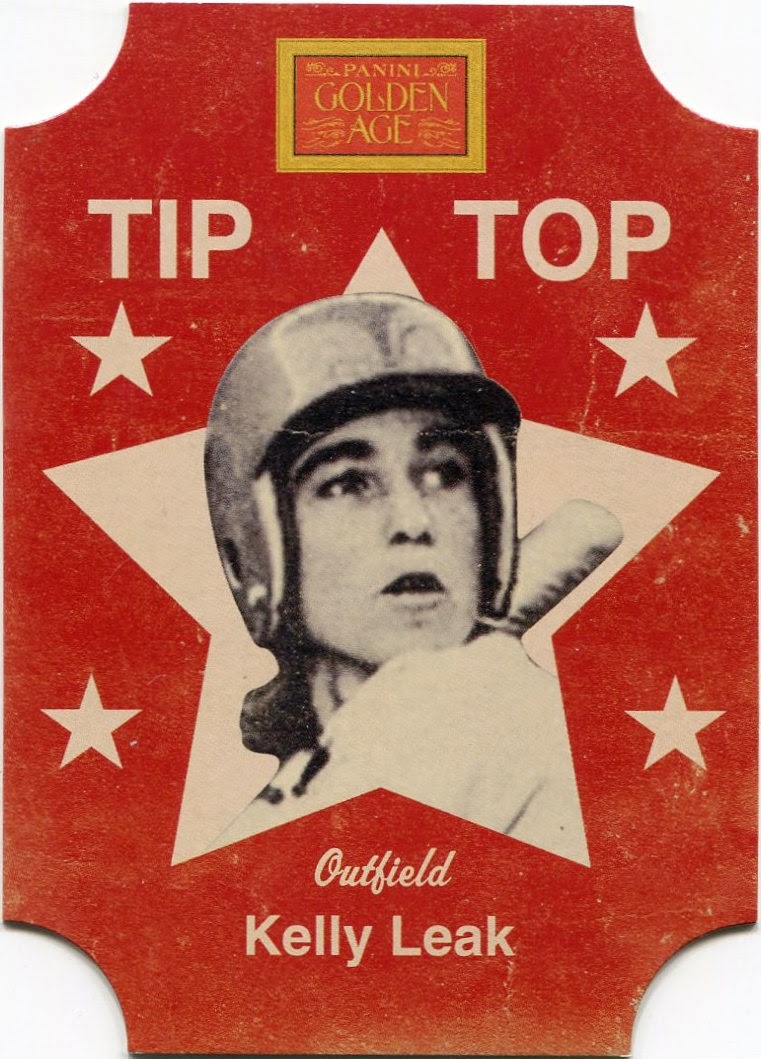 This, however, was the unquestioned quarter find of the day.

Golden Age has been responsible for a lot of great things lately, but nothing beats their inclusion of the Bad News Bears in last year's checklist. As one of my favorite baseball movies ever, it certainly feels good to own real, actual baseball cards of Engelberg and Rudy Stein.

What I didn't know was that the Bears actually flooded out into Golden Age's insert checklists as well. This outstanding Kelly Leak is part of the "Tip-Top Bread" throwback series.

I let out an audible "Wow!" when I first discovered this beauty.

You can ask my dad for proof. 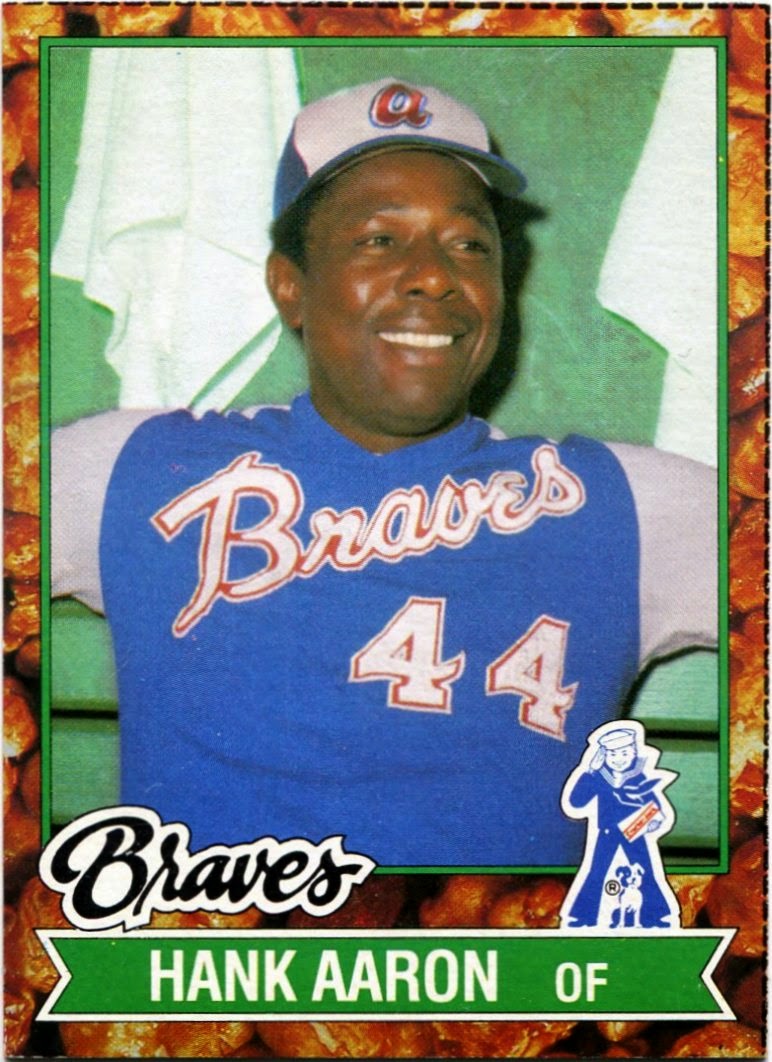 I did a bit of dollar bin digging at Saturday's show as well.

While I'll show more of those finds in future posts, I dug up some more modern dollar treasures as well.

This Cracker Jack Hank Aaron oddball has to be the only popcorn-bordered card in my collection.

I didn't have to think twice about dropping a dollar on it. 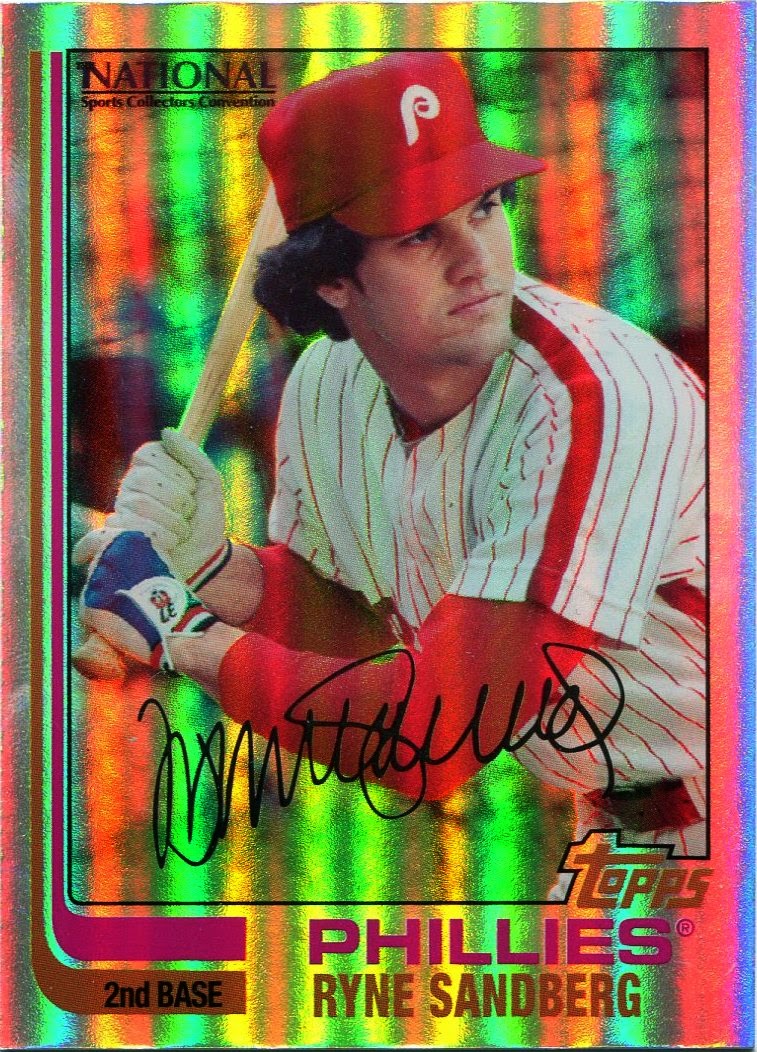 However, the discount bin find of the day was probably this one.

Landing for a single dollar was an absolute steal. I would've payed double or triple that without blinking an eye.

As you can probably tell, this isn't your standard Ryne Sandberg card. It's an oddball, for one thing. From what I can gather, these were probably given away as part of the VIP package at the 2007 National.

What made it such a must-have piece for me, however, was the fact that it features Sandberg during his brief six-game stint as a Philadelphia Phillie. This is just the fourth Sandberg card in my Phillies binder, and two of those come from the 2010 National Chicle checklist.

Sandberg was one of the best players in Cubs history, but it's his cards with the Phillies that really get me excited.

Even if these discount treasures had been my only finds of the day, I would've walked home a happy man.

As you'll see in future posts, however, they weren't. We still have a lot more to cover.

People can head down to Florida and enjoy their spring break there if they want. If that's your scene, then I'm perfectly fine with that.

Nice cards ! I haven't been to a really good show lately.

Nice pickups. I'm really torn on Anthem cards though. Maybe its the military brat in me. On one hand, I like the patriotism.

On the other, why is the photographer taking pictures during this time and not doing the same thing as the player?!

I wanna search some dime boxes. I wish someone here had some.... Great finds!

Nice pickups. Don't feel too bad trimming down that Mr. Turkey. It was hand cut from a package.

Just curious, have you ever asked for the price on a whole Dime Box? Surely they won't want .10 for each card. They would probably just shot you a pretty good price because if they are selling them for .10 each they are just trying to get rid of them.