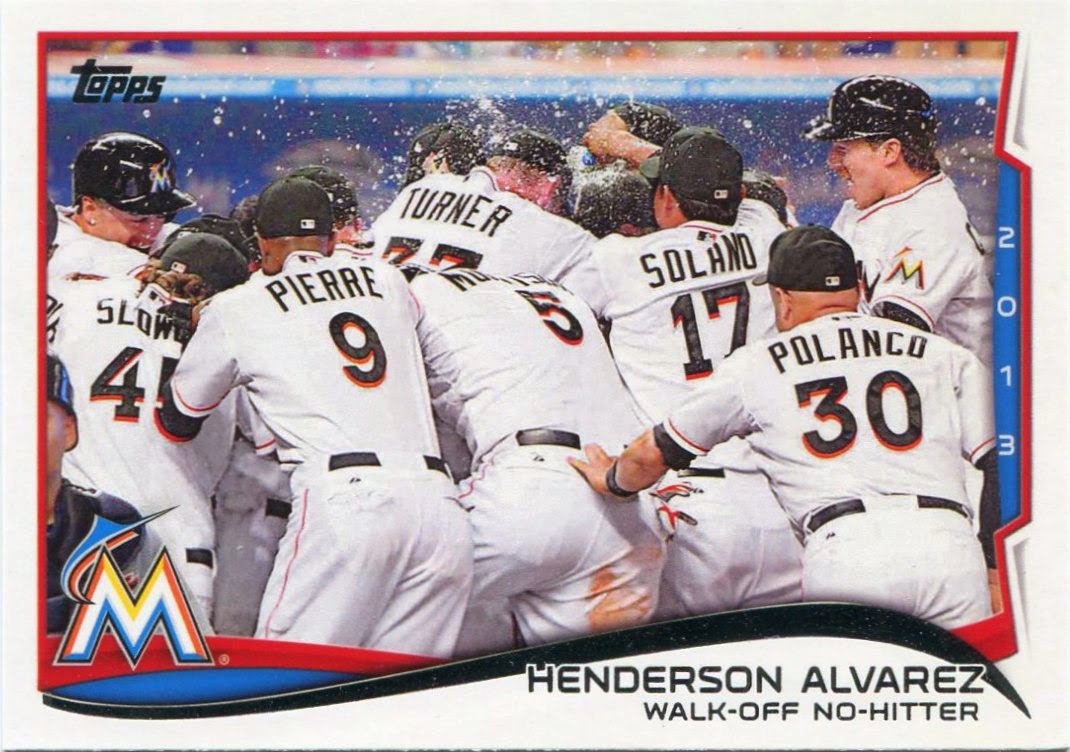 It's not a kid's hobby anymore.

This is the one thing I seem to hear most often from the general public when it comes to baseball cards.

And, as most of today's collectors know, it's totally false.

Do companies price kids out of the hobby with $200-per-pack releases like Tribute or Museum Collection? Sure.

With today's short-printing craziness, is it tough for the pre-teen Dodger fan to get some of Yasiel Puig's rarer cards? Certainly.

Both card-wise and price-wise, though, there is still a place for the kids in this hobby. Just look at the title of this blog.

At 22 years old, I'm on the younger side of today's collectors. Though I've never had exorbitant amounts of money to spend on cards, I've been in this thing for almost 15 years now without much of a problem.

And I'm not the only one. The blogosphere is filled with younger collectors like myself. One of the many is Alex over at the terrific blog "Chavez Ravining". He and I worked out a swap that landed me nearly all of my remaining 2014 Flagship base needs.

The lot I received from Alex offered my first glimpse into this fascinating Henderson Alvarez "Highlights" card. Last year, the Marlins pitcher celebrated one of the strangest no-hitters in history.

With a no-no at stake, he was on deck in the bottom of the 9th in a 0-0 game when a wild pitch resulted in the game-winning run. He and his teammates celebrated in the on-deck circle, which is what we see on this card.

See if you can spot Mr. Alvarez in this shot, though. I sure can't. I see Juan Pierre, Placido Polanco, Logan Morrison, and a lot of other Marlins. But no Alvarez.

He's nowhere to be seen on his own baseball card. 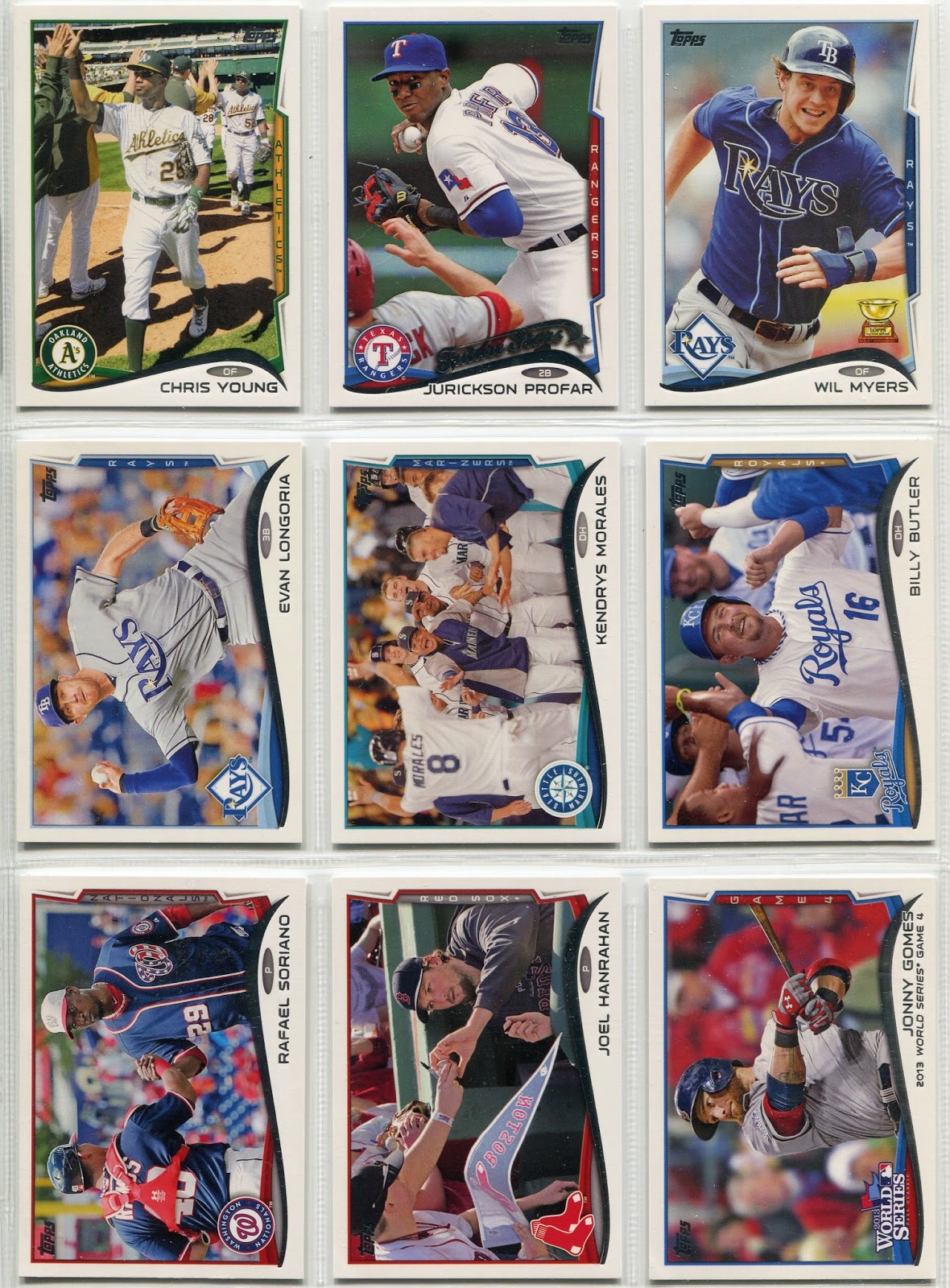 That was just the beginning of all the great 2014s Alex sent my way.

You might see the Morales pop up on "Card of the Year" lists come December. 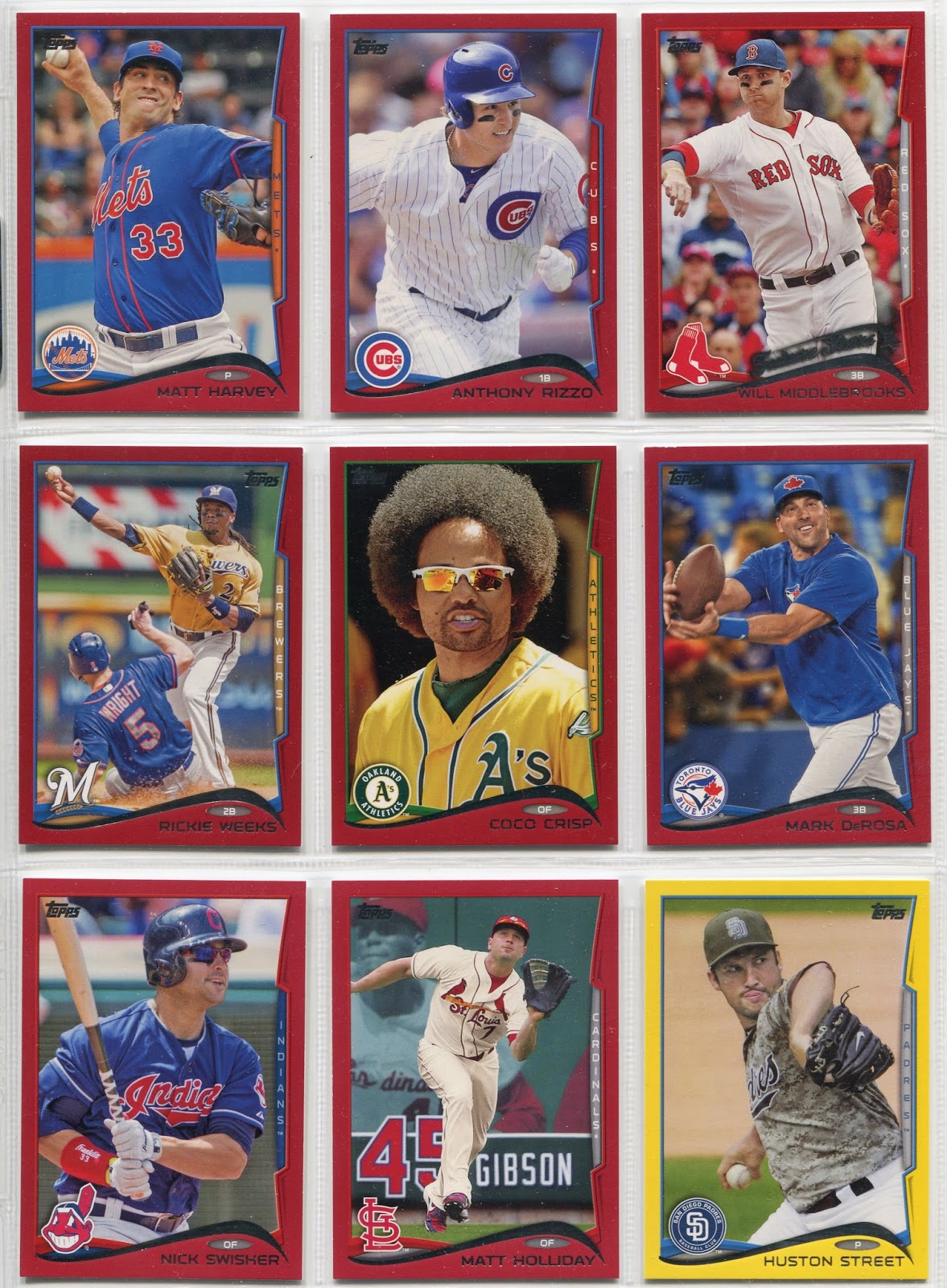 Alex was also nice enough to send a stack of 2014 Topps parallels I needed as well.

Among the red-bordered suspects was a multi-sport hero in Mark DeRosa and the 'fro-tastic Coco Crisp. I may just have to go for the Crisp rainbow this year.

Though it looks out of place in such a sea of red, Alex also threw a yellow-bordered Huston Street into this lot. 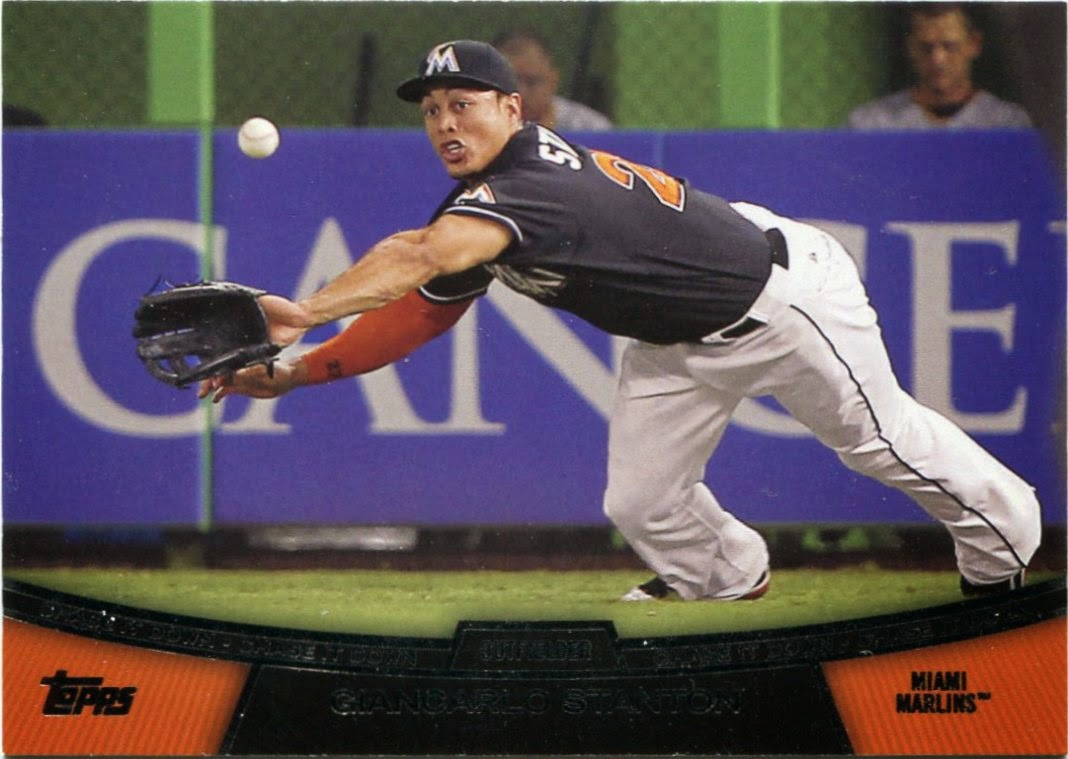 While the 2014s would've been more than enough, Alex didn't stop there.

He also did some serious damage to my new Mike/Giancarlo Stanton collection, a barrage that included this terrific "Chase It Down" insert from 2013 Flagship.

Though I barely heard a peep about them last year, I really enjoyed this series. 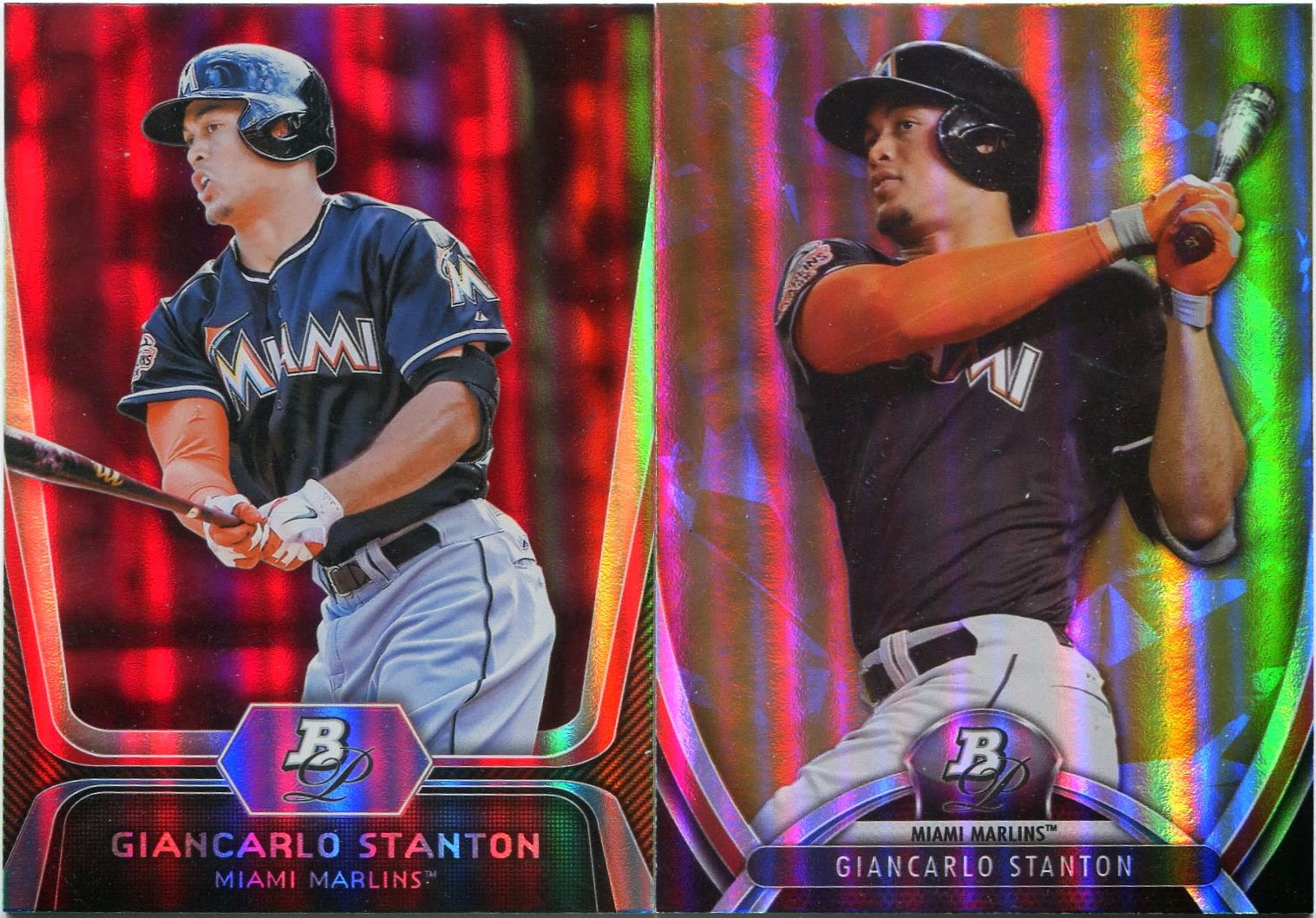 They say that children are drawn to shiny objects.

If that's true, then kids certainly have a place in the current hobby. There's no shortage in shiny cardboard these days.

Just bask in the glory of these two Stanton beauties for proof. 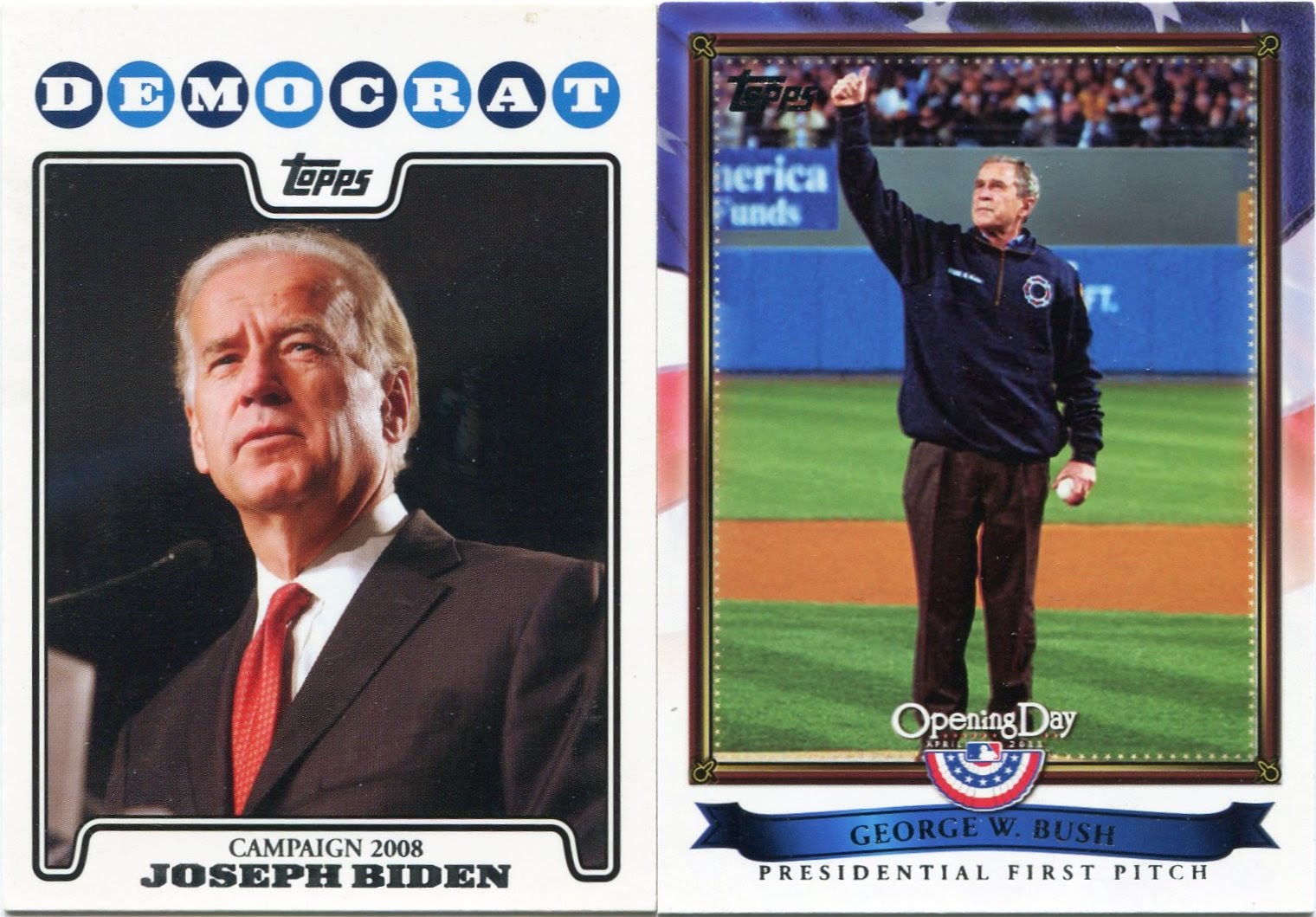 Presidents are preferred, but I'm open to receiving any new politically-themed cards.

It's a bipartisan collection as well. 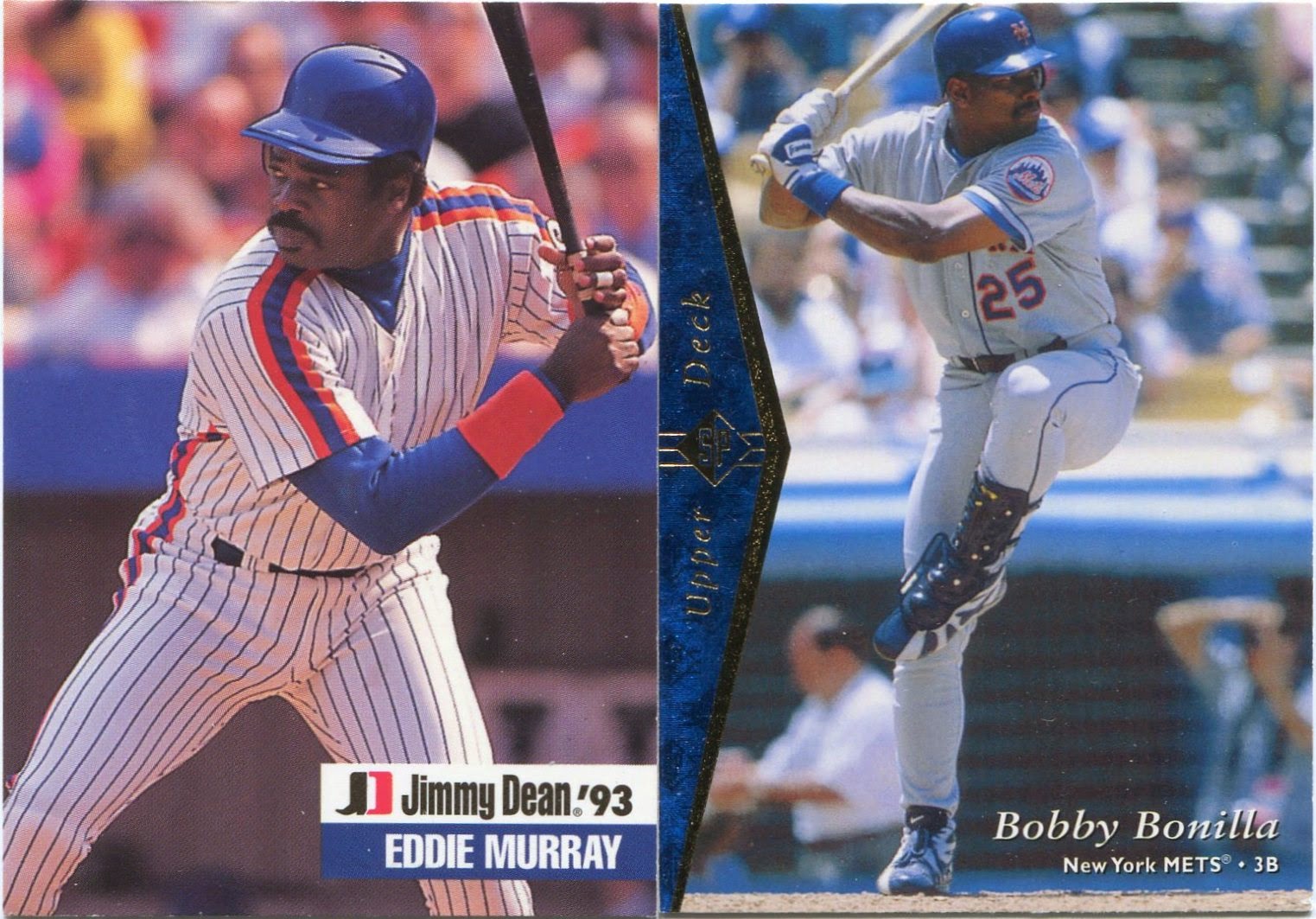 Also present were a couple fun additions to my Mets binders.

I've never been a big breakfast guy, but those Jimmy Dean oddballs sure are tasty. 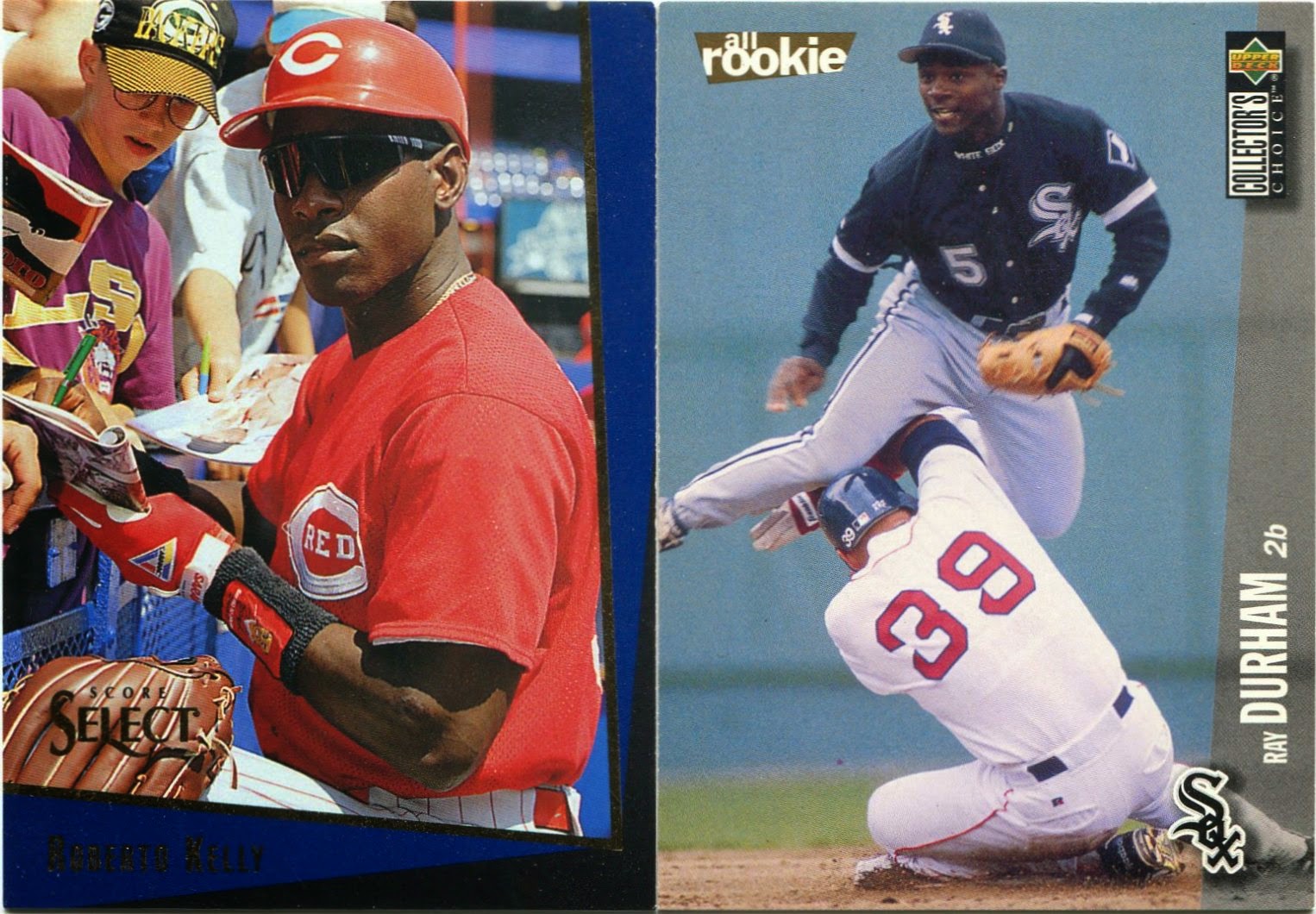 Alex got into the mini-collection fun with these two.

Roberto Kelly is filed under the "autograph" theme, while Mr. Durham will go under the "double dip" tab.

Durham gets bonus points for having the Green Monster in the backdrop. 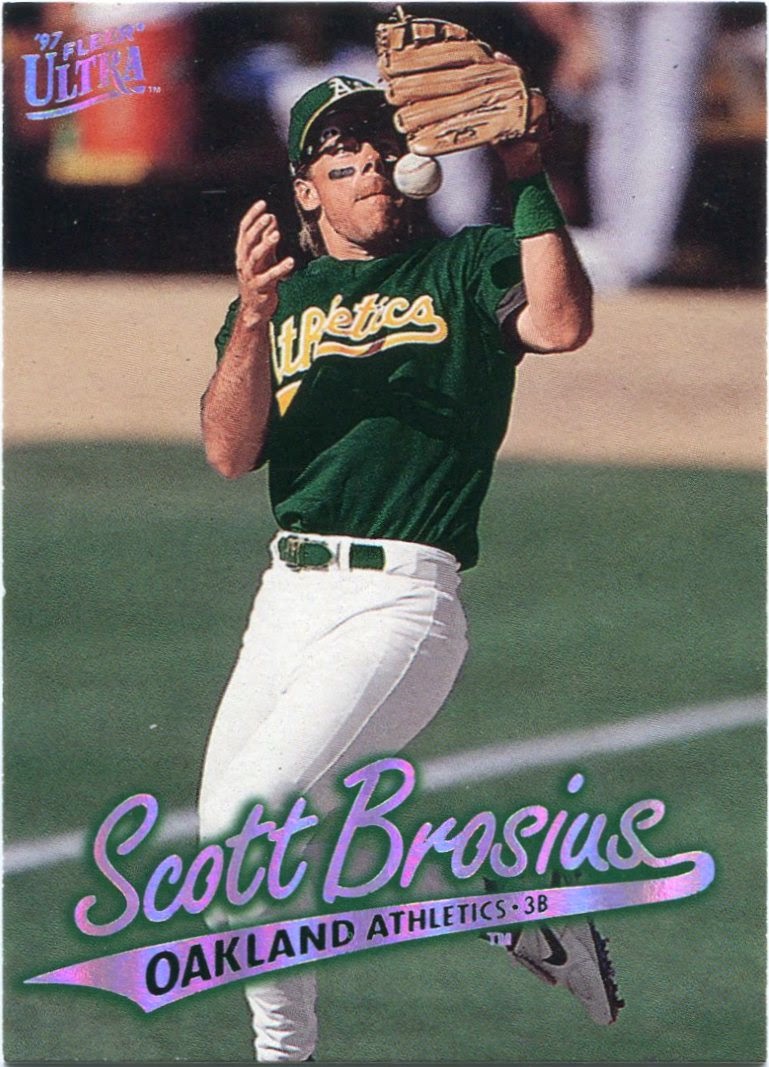 I've often wondered how card companies decide which photos to use for their latest product.

Some, I would think, are no-brainers. I doubt Topps thought twice about using such a glorious shot of Coco Crisp's 'fro in 2014.

Still, some choices are downright puzzling, as we have with the final card from Alex's loot.

I like to believe that baseball players have at least a passing interest in their baseball cards. I can't help but wonder how Scott Brosius would react to seeing the shot Ultra decided to use for his 1997 issue.

There's not much doubt as to what is going on here. That's a clear "E5" on Mr. Brosius.

I don't think he'd get much of a kick out of that one.

Then again, maybe a kid would enjoy a funny shot like this. Maybe that's what Ultra was going for, after all. I sure got a good chuckle out of it.

Deep down, I guess we're all kids when it comes to collecting baseball cards. I know I am.

I'm also a fan of that Henderson Alvarez card. It definitely made my horizontal frankeset.