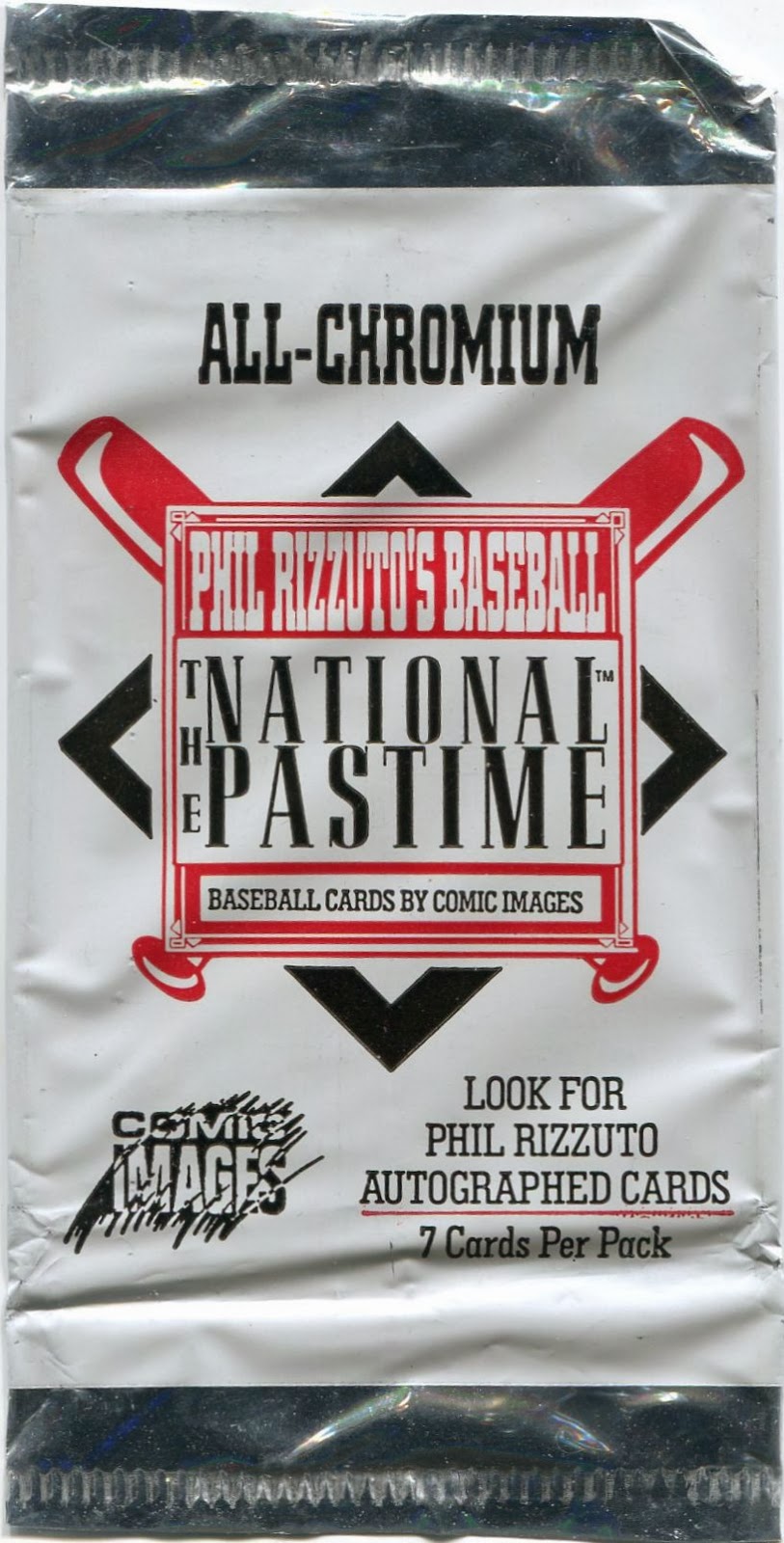 Now that the whole card show extravaganza is over, I have some serious work to do on this blog.

In what has become a bit of a running theme around here, I'm once again way behind on my trade posts. I'll do my best to catch up on those in the coming weeks, as I've had a bunch of different people send over tons of awesome cardboard.

One particularly exciting trade package I received a while back came from Chris of the terrific blog "View from the Skybox". In an extreme act of generosity, he sent over a whopping ten unopened packs from the 1995 Phil Rizzuto's National Pastime brand.

Chris noted my fascination with these things in a past post and just happened to be sitting on some extras. I was more than happy to take them off his hands.

I'd seen these cards around the blogs for a while before finally having a few trickle in through trades. Though Finest was in its infancy at the time, chrome wasn't really a thing in the hobby in 1995. These "Scooter"-sponsored cards, however, are nothing but chrome.

Better yet, they chronicle much of the early days of baseball history. This is the type of set I've begged Topps to release for as long as I can remember.

So, because Chris was nice enough to send ten packs of these beauties my way, I've decided to recap my top ten favorite pulls from this fun-filled break. 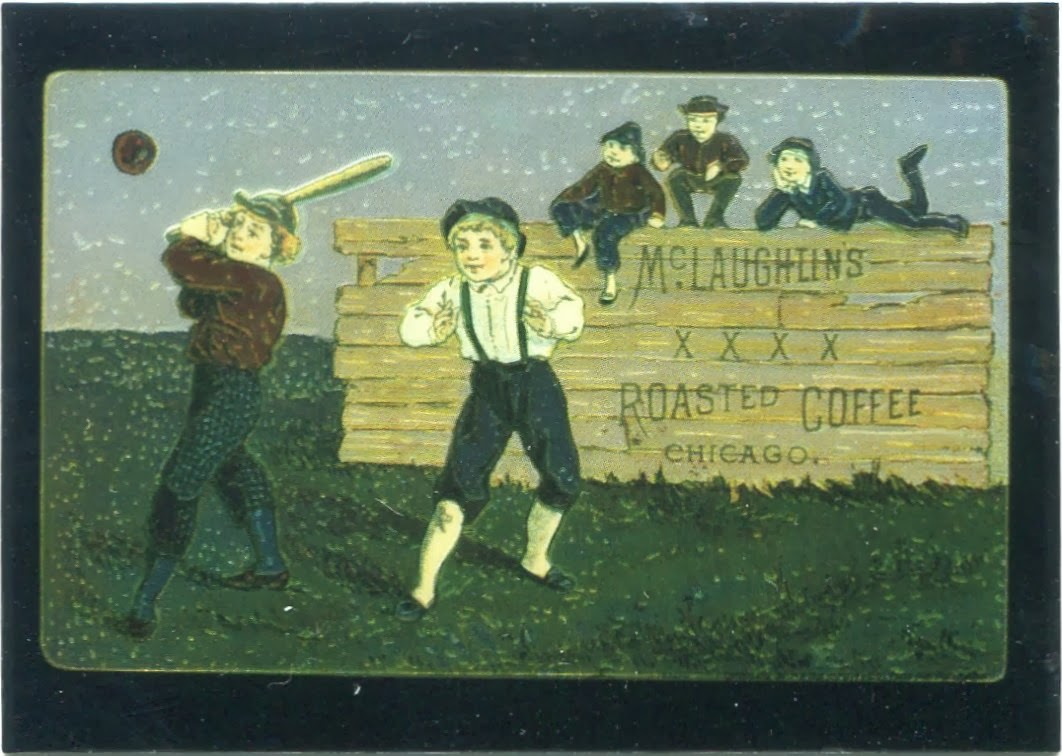 Despite what some of my friends might think, I don't know everything there is to know about baseball.

There's still a whole lot of history I haven't yet covered. That's the beauty of sets like these. You can really learn a lot from them.

I sure didn't know that cards were once inserted into coffee tins. As the back of this one notes, however, coffee companies began to do so after seeing the success of tobacco cards in the late 19th century.

Chalk that one up to the baseball trivia file. 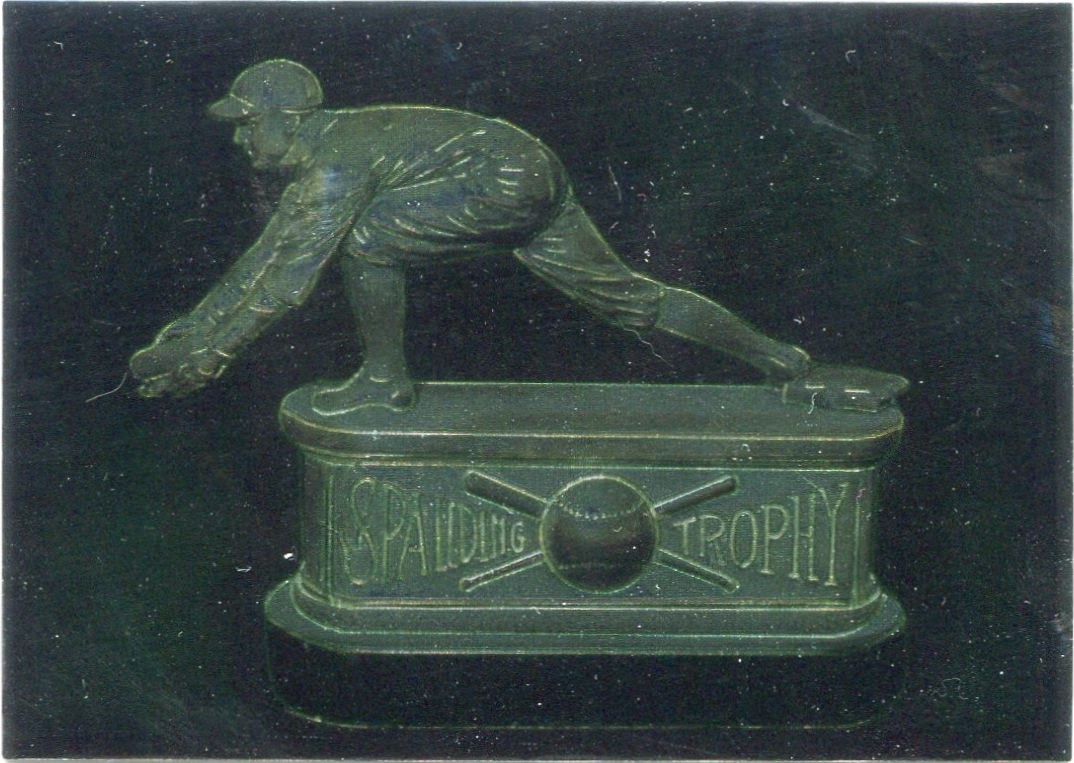 I'm a big fan of artifacts from early baseball history.

From what this card says, the Spalding company offered these trophies through their mail order catalog in the '20s. Though they certainly looked nice, they were quite expensive, so not many people bought them.

However, some minor leagues gave these out as awards for their most outstanding players at the time. 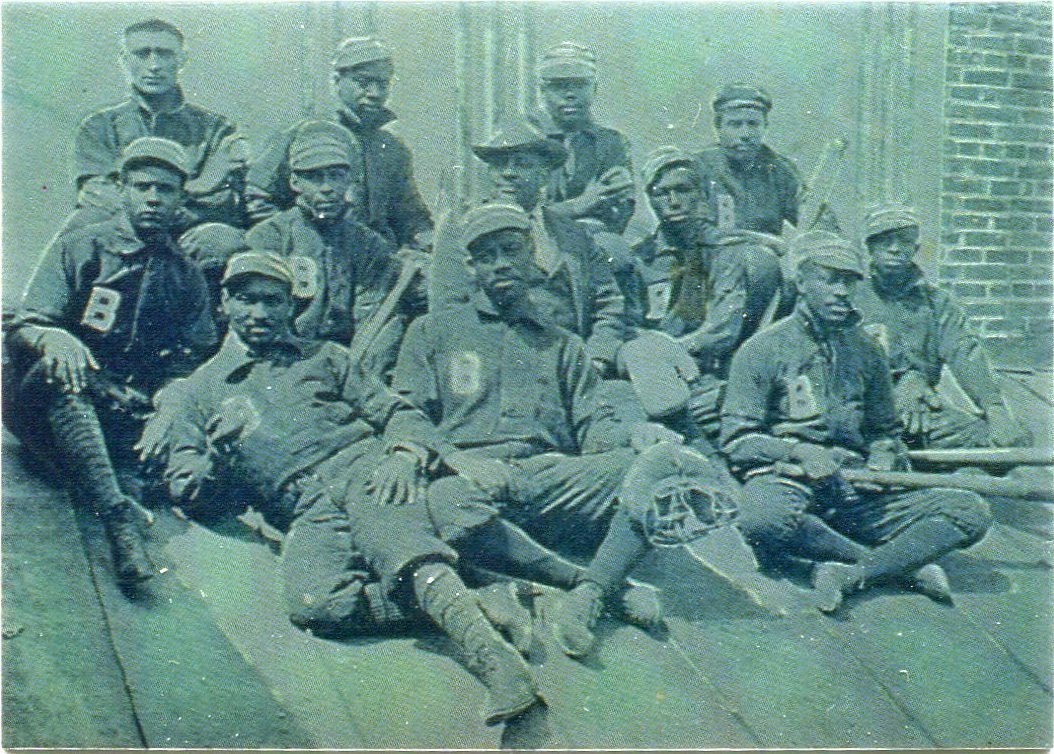 According to the back of this one, almost nothing is known about the Baltimore Blues franchise.

Supported by local businessmen, the squad was an all-black team in the days before the Negro Leagues. However, no stats or records exist of the Blues, leading to them being largely omitted from baseball history.

This was certainly the first I'd heard about them. 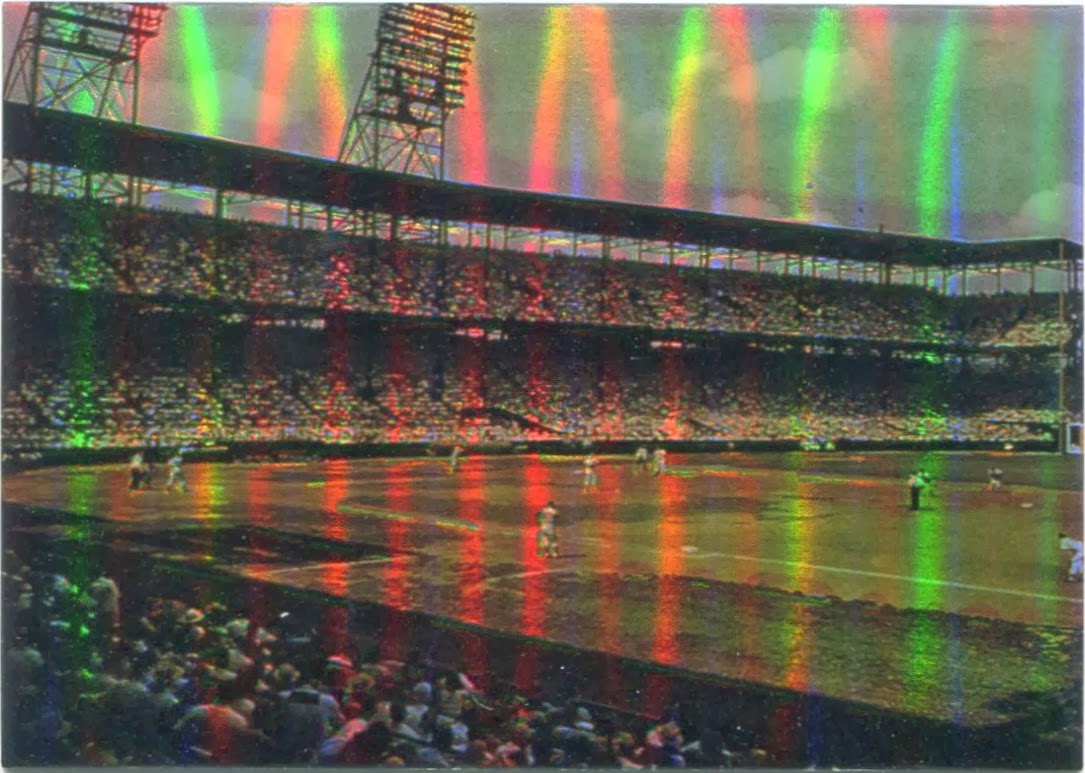 As if these cards couldn't get any better, some of them even come in refractor form.

I'm not sure they were called refractors at the time, but they're definitely the precursor to today's myriad of X-fractors, blue refractors, and super-duper refractors.

This beautiful depiction of Cleveland Stadium comes from around the 1950's. I've never been good with ballparks, so I didn't know that the Indians played there all the way until the opening of Jacobs (now Progressive) Field in 1994. 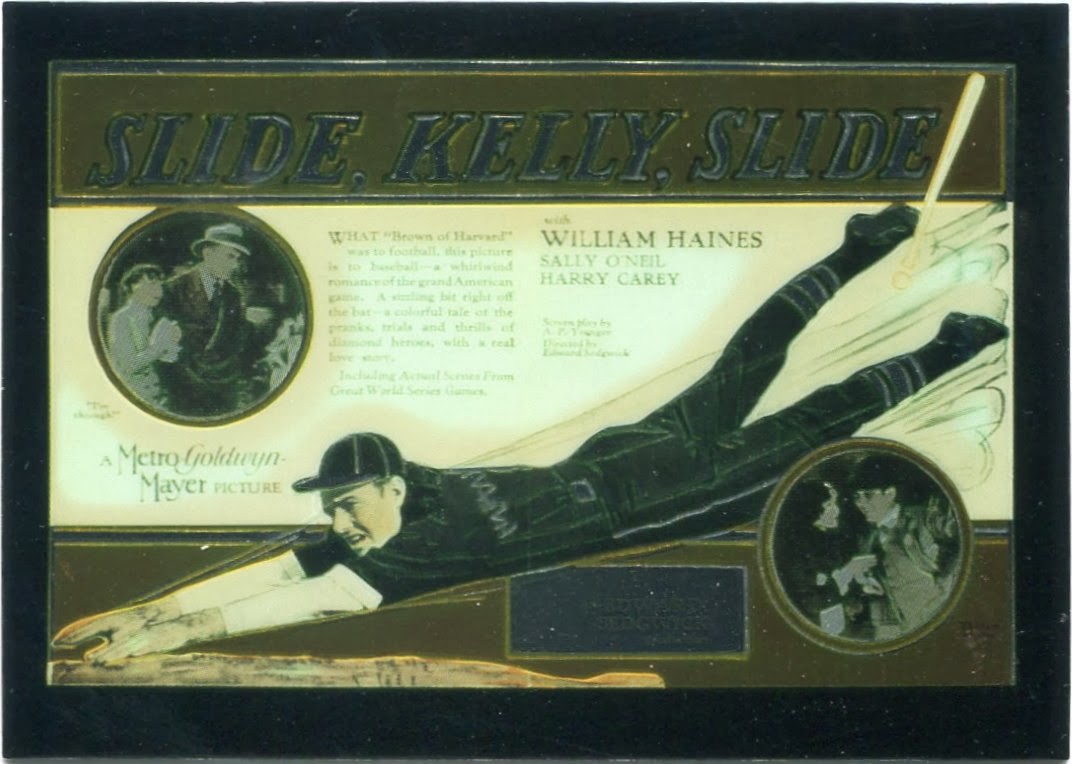 From what I know, Slide, Kelly, Slide! was a theater play based on the life of superstar King Kelly.

Before this card came along, however, I never realized it made its way onto the silver screen. This is an advertising poster for the 1927 film.

They can't all be Citizen Kane, I guess. 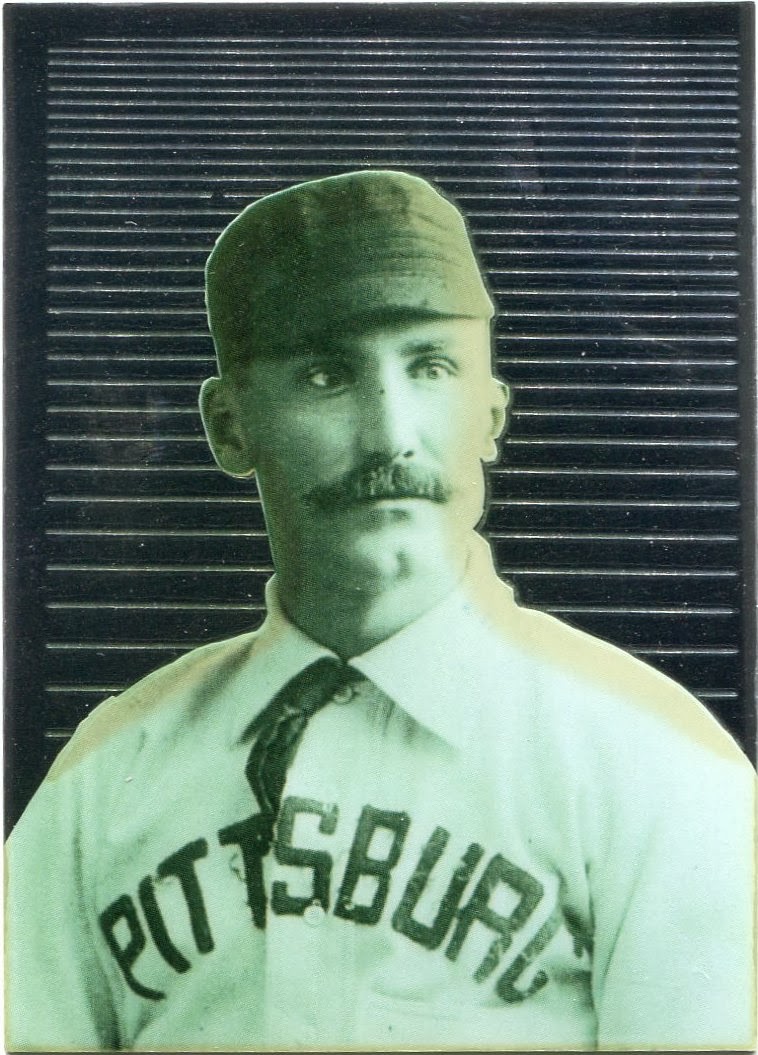 Though most of this set revolves around physical artifacts from baseball history, a few of the cards do depict individual players.

The one you see above features Jake Beckley, a largely forgotten turn-of-the-century Hall of Famer who played in the bigs from 1888 all the way until 1907.

I'd only owned one other card of his before these packs came along. 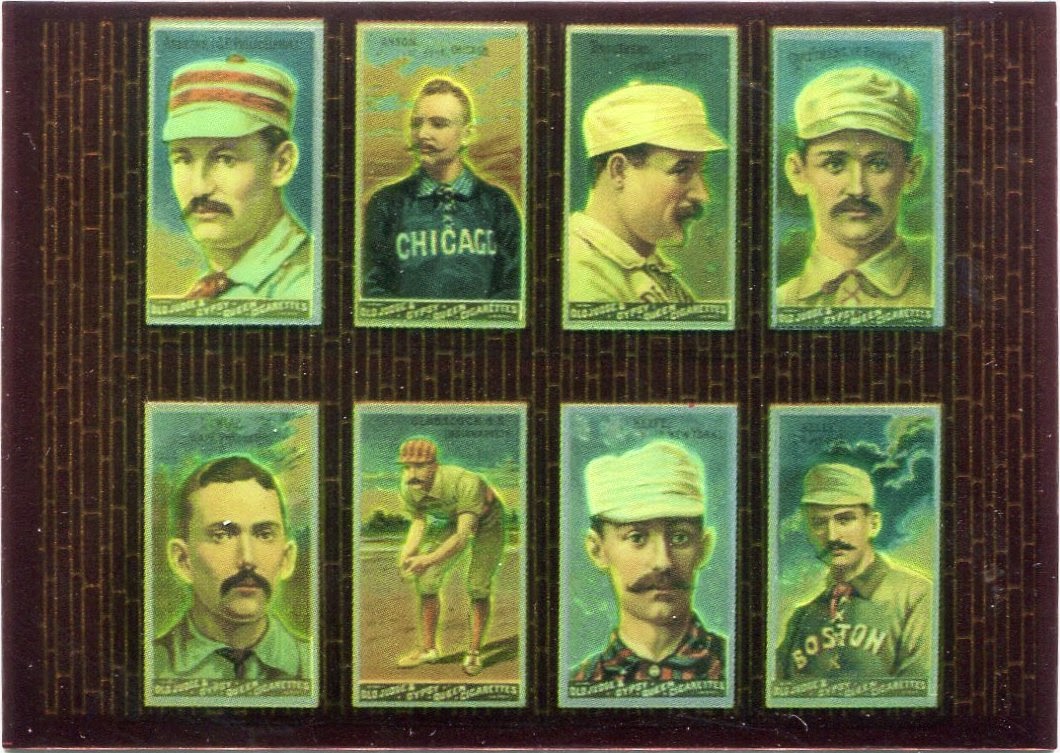 This beauty shows eight of the game's prime stars of the late 19th century in cardboard form. Cap Anson and King Kelly are just a few of the greats featured here.

Though reproduced as a fairly average retro set by Upper Deck in recent years, the Goodwin company was one of the first to include cards in packages of tobacco.

It's a pipe dream of mine to own a real one of these things someday. 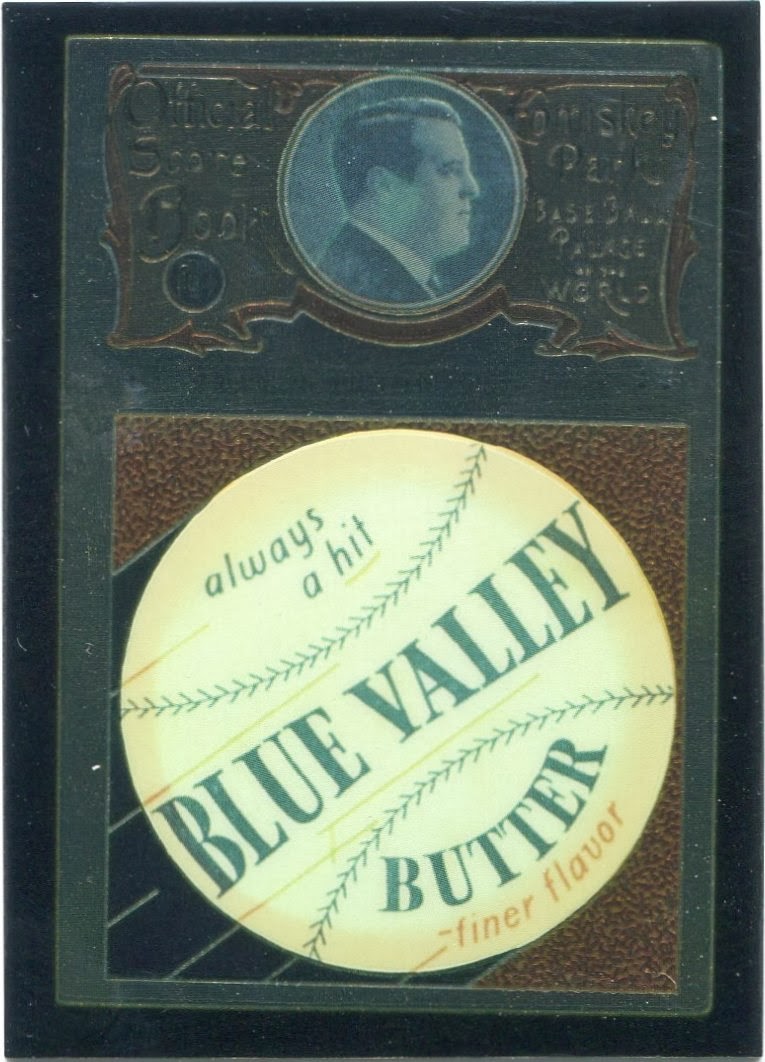 As someone who has lived around Chicago for all of my life, it gives me a great deal of pride to know that baseball's very first All-Star Game was held here in the Windy City.

All of the game's greats came together to play at Comiskey Park on July 6th, 1933. Fittingly, Babe Ruth hit the first homer in All-Star Game history.

This is an actual program from that historic contest. 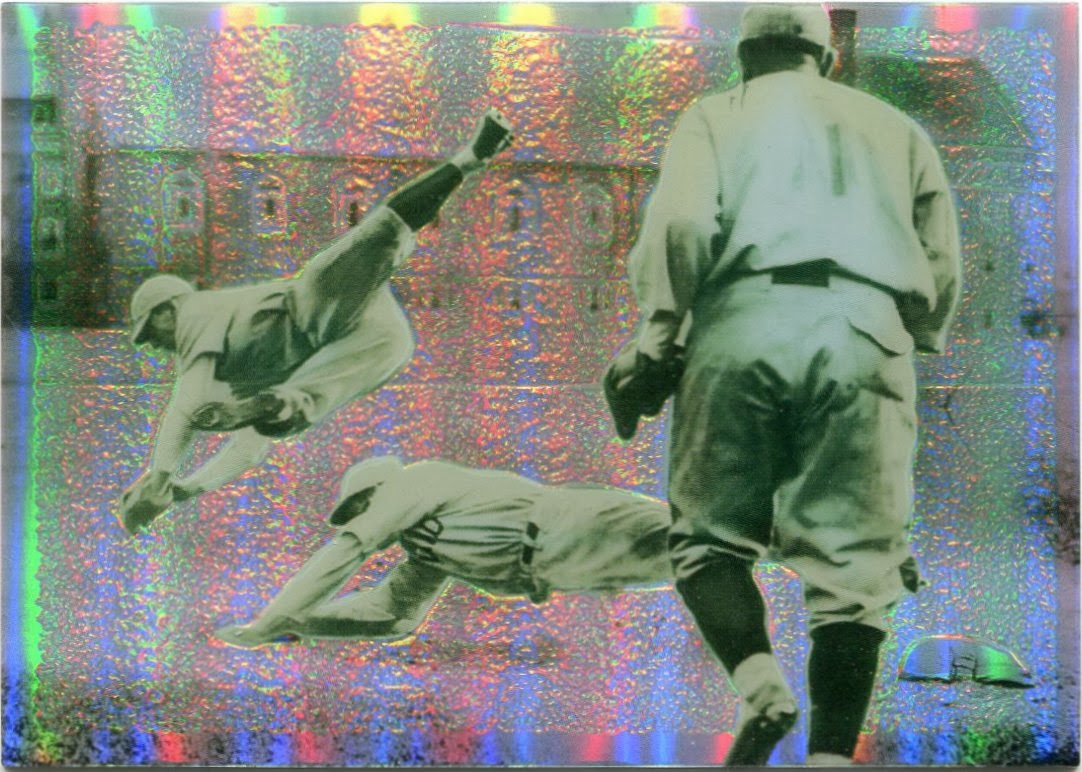 Though this card doesn't give any specifics as to the players or teams featured here, this is one spectacular action shot.

Even better, it's a coveted refractor.

I think the beauty of it speaks for itself. 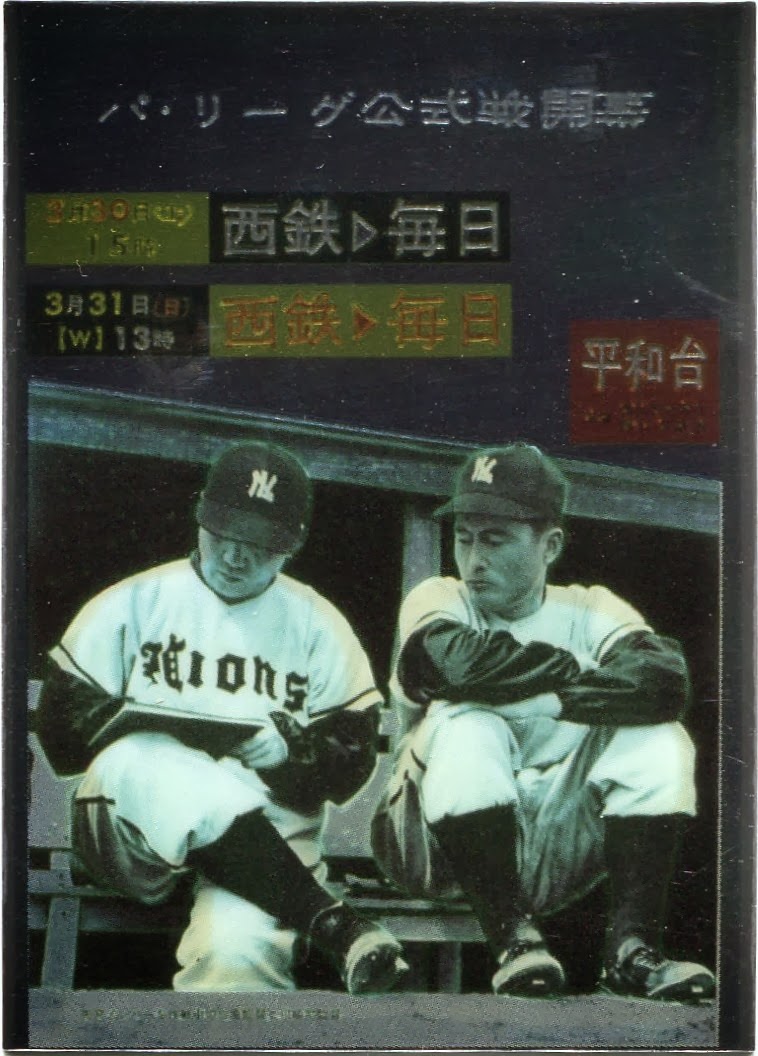 I wouldn't mind taking a trip to Japan one day.

If nothing else, I'd love to see a Japanese baseball game. From what I've seen on television, they seem like absolute bedlam. In a good way.

I've long been fascinated with Japanese baseball. I very nearly pulled the trigger on a real Sadaharu Oh card at Sunday's card show, but my budget didn't really allow for it at the time.

Though that may have never materialized, I can certainly live with this awesome piece of Japanese baseball history. According to the back, this 1950's poster advertised a contest between Nishitetsu and Mainichi of the Japanese League's Pacific Division.

I can't say I've pulled many cooler things from a pack of baseball cards.

Another huge thanks goes out to Chris for sending so many of these things my way.

They're perfect for a baseball history nut like myself.
Posted by Nick at 6:14 PM

I have that whole set in it's own binder, I love it !

The Indians played their first game at Municipal Stadium in July 1932. Still played some games in League Park until about 1946.

Very cool. Never seen these before.

Needless to say (since I've said it before), I dig these. Nice get...

Never scene this before. Looks like I will have to go on the ok out for some

I don't quite get which ones are refactors or not because you only get those 'refracting' when scanned.