Behind the scenes of player collecting 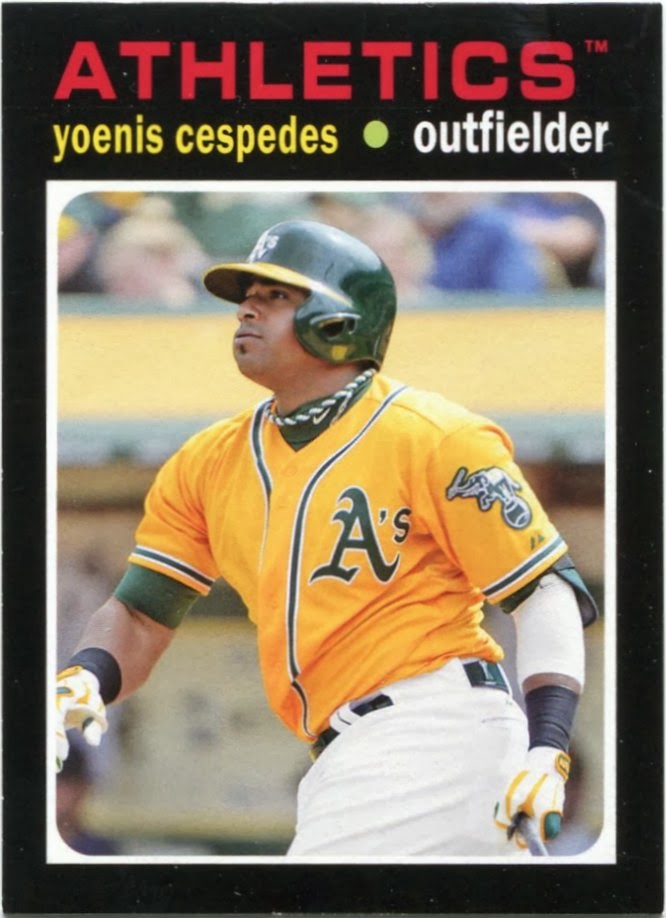 I wear a lot of different hats as a collector.

I'd say the hat I wear most, however, is that of a player collector. Though I've never actually jotted down a formal list of guys I collect, I try to hoard and accumulate cards of hundreds of different players.

That said, I don't collect every big leaguer. So, how do I actually decide who goes into my binders and who doesn't?

It's a good question, and one that doesn't always have a cut-and-dry answer. Luckily, a trade package I recently received from Kerry of the great blog "Cards on Cards" gives me an opportunity to delve further into that topic, as he hit on a lot of my player collections.

I've said this before, but don't be fooled by my "set needs" tab on the sidebar of this blog. One of the few things I'm not (for the most part) is a set builder. Those are actually player collection wants in disguise.

This nifty '71 mini from last year's Topps Update was on that set/player needs page. So, then, why do I collect Yoenis Cespedes?

I'm a big fan of the foreign "imports" that have found their way into the bigs these past few years. Cespedes shocked everyone by signing with the A's out of Cuba a few years ago, and he's dominated in Oakland thus far.

He's been in my binders since his first day in the bigs. 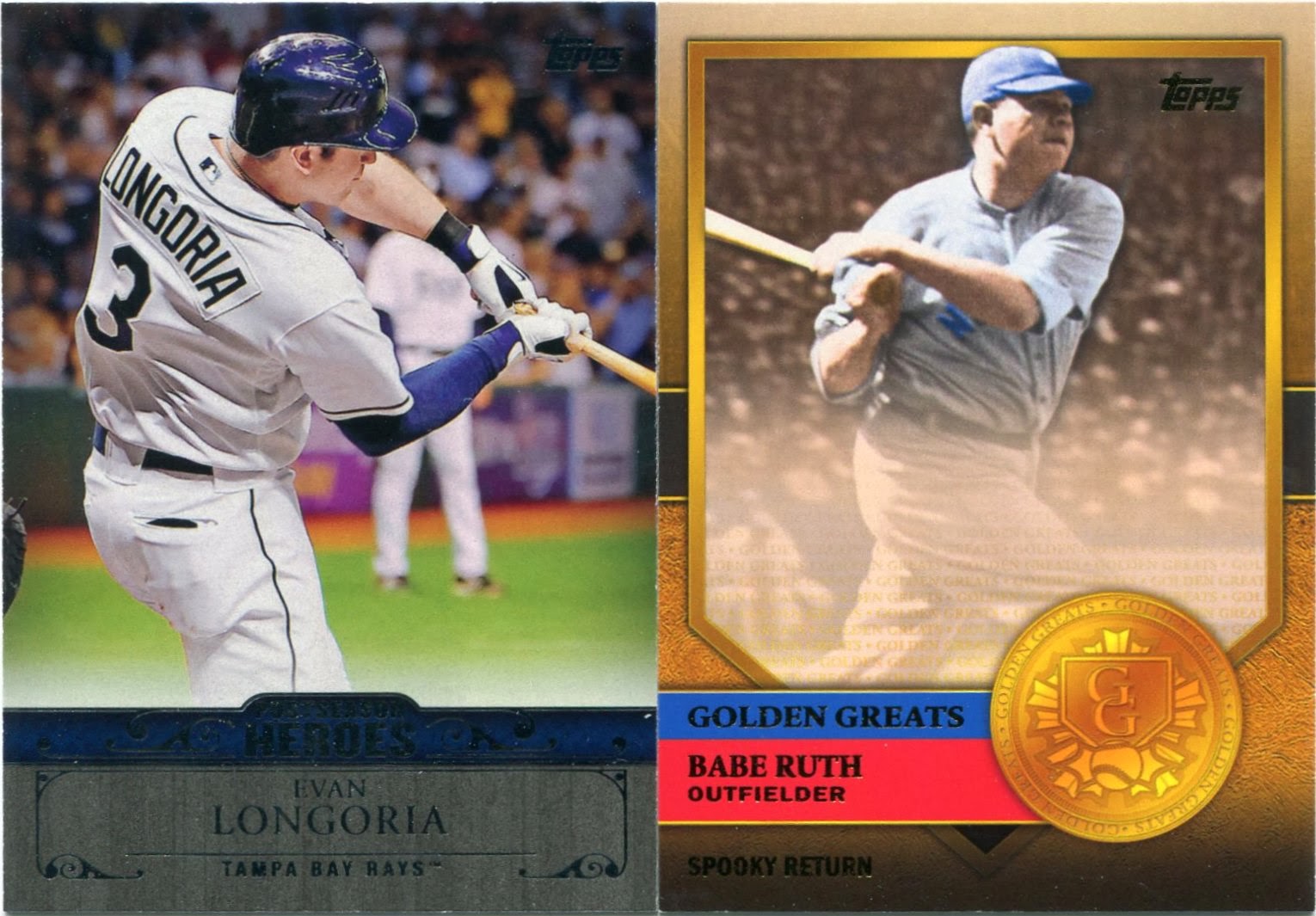 My player collections aren't solely based on talent.

If they were, I probably wouldn't collect rather obscure guys like Adam Hyzdu and Tanyon Sturtze.

The foundation for my Evan Longoria collection, however, was pretty much based on hype. I pulled his rookie card from a pack of 2008 Topps Chrome at the peak of Longo-mania, during the season which he'd take home American League ROY honors.

At that moment, I remember thinking, "Yeah, this guy is definitely going into the binders." And he's been one of my most treasured player collections ever since.

I collect almost every Hall of Famer in baseball history. Babe Ruth, of course, was part of the inaugural HOF class in 1936. It's a no-brainer.

Besides, I'm sure most of us have at least a couple cards of "The Great Bambino" in our collections. 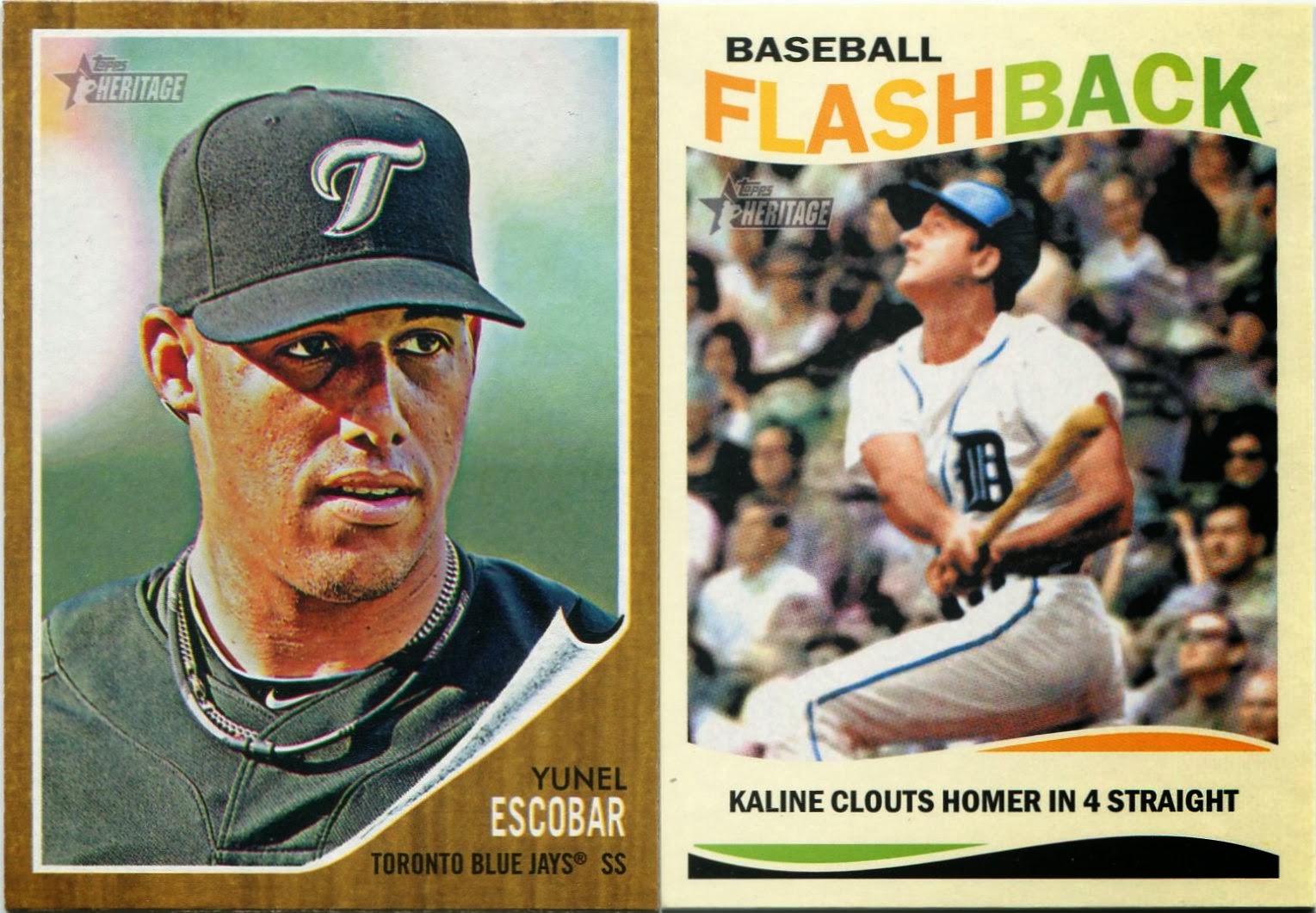 I have so many different player collections that I sometimes forget why I'm collecting a guy in the first place.

Yunel Escobar belongs to that fold. He's emerged as a formidable shortstop in recent years, but I've been collecting him for much longer than that.

Like Mr. Longoria, I'm sure it has something to do with his hype as an up-and-coming shortstop with the Braves back around 2007. Whatever the reason, I now have Yunel Escobar's 2011 Topps Heritage short-print in my binders.

Al Kaline is yet another prime part of my HOF collection. He gets bonus points for getting me to flash back to my days of watching Hey Arnold! on Nickelodeon. Arnold's favorite player was a guy named Mickey Kaline, an obvious mix of Mickey Mantle and Al Kaline.

Even though Al Kaline is a baseball legend, I can't help but think of the fictional Mickey Kaline every time I look at one of his cards. 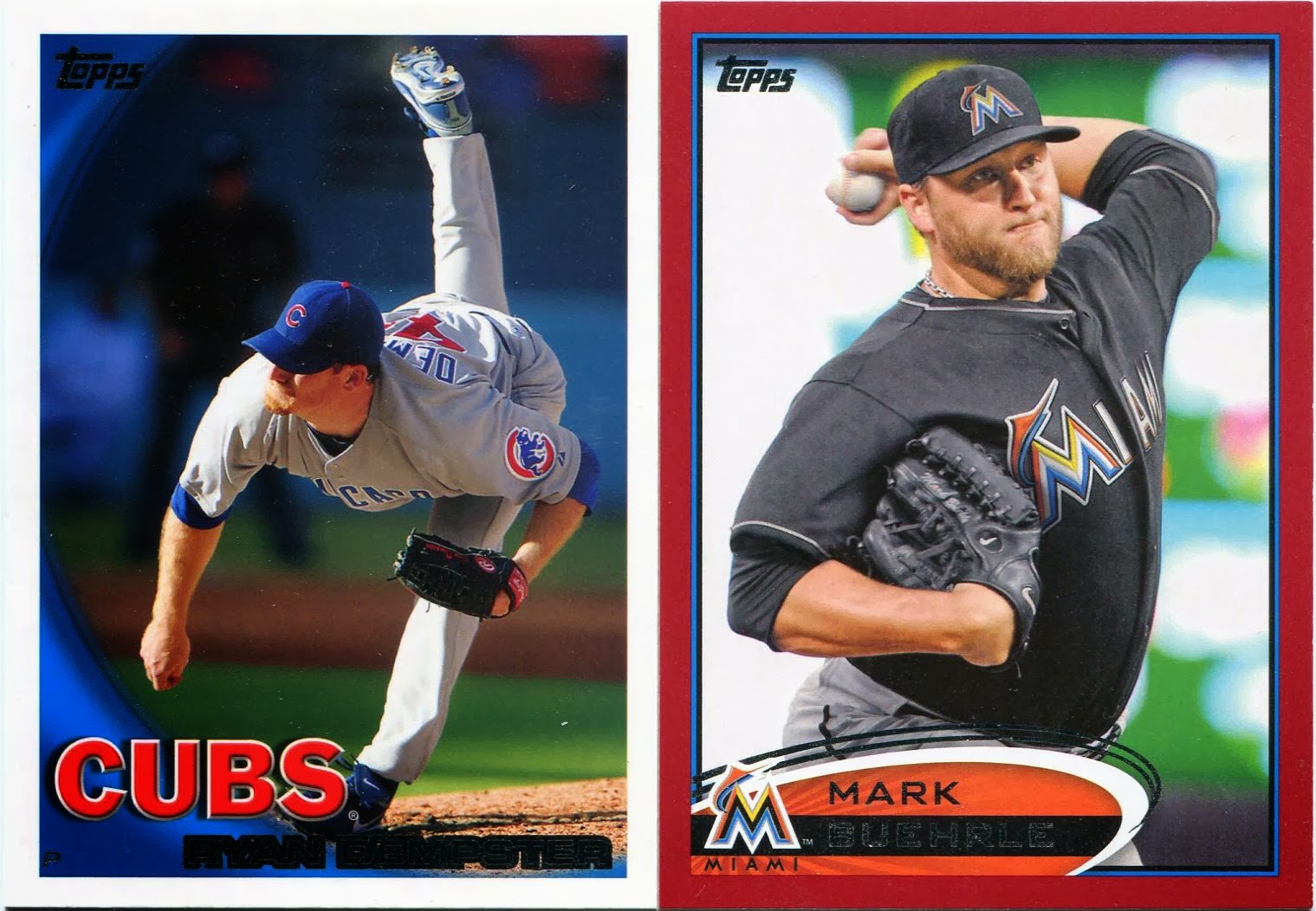 I can be a bit of a late bloomer when it comes to player collecting as well.

Ryan Dempster had been in the bigs since 1998, yet I didn't decide to start chasing down cards of his until a couple years ago. Because he's a fun-loving guy and a heck of a pitcher, I can't help but wonder what took me so long to make him a part of my collection.

Though Kerry sent along a nice red-bordered parallel of him as a Marlin, Mark Buehrle has long been a "binder guy" for his star-studded stint on the South Side of Chicago.

He's arguably the most consistent pitcher I've ever seen. 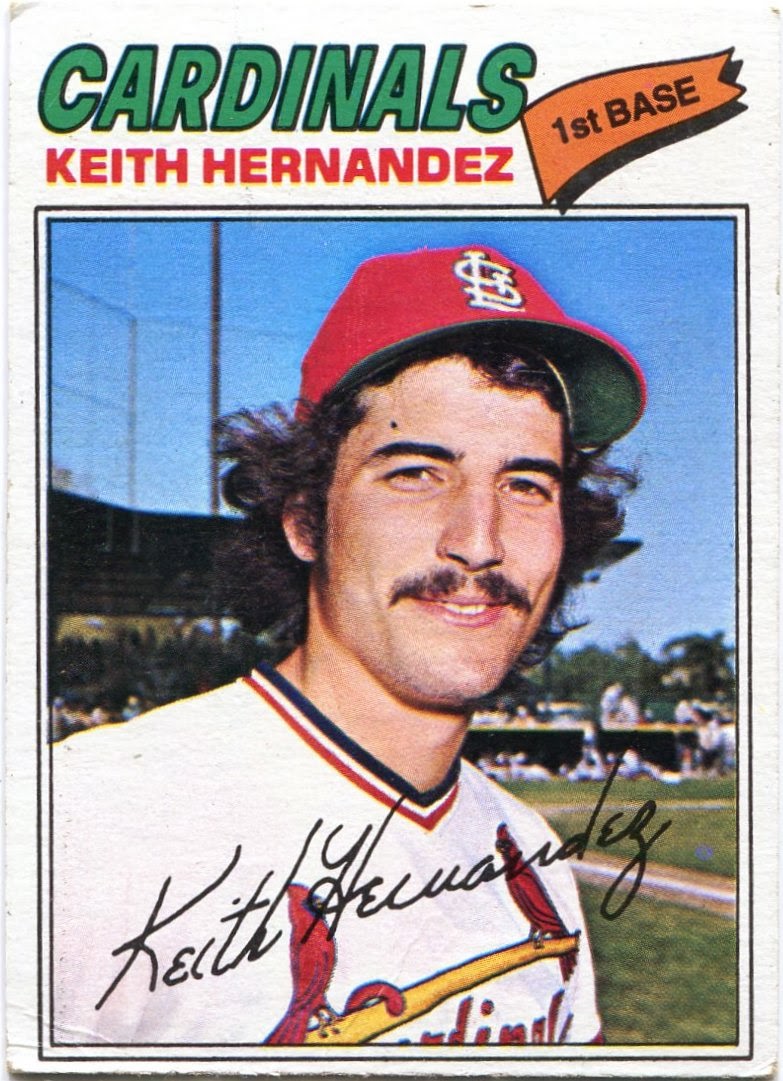 Since his blog and collection revolves around Cardinals, it's only fitting that Kerry included a few select Redbirds in this trade package.

Before this batch of cards arrived, I'd somehow never tracked down a copy of Keith Hernandez's 1977 Topps issue. I'm sure a lot of collectors from the '70s remember this one well.

Hernandez may have been one of the better first basemen of his day (as well as a borderline Hall of Famer), but I'd be lying if I didn't say my decision to collect him wasn't influenced by his famous appearance on Seinfeld.

I'm not driving him to the airport. 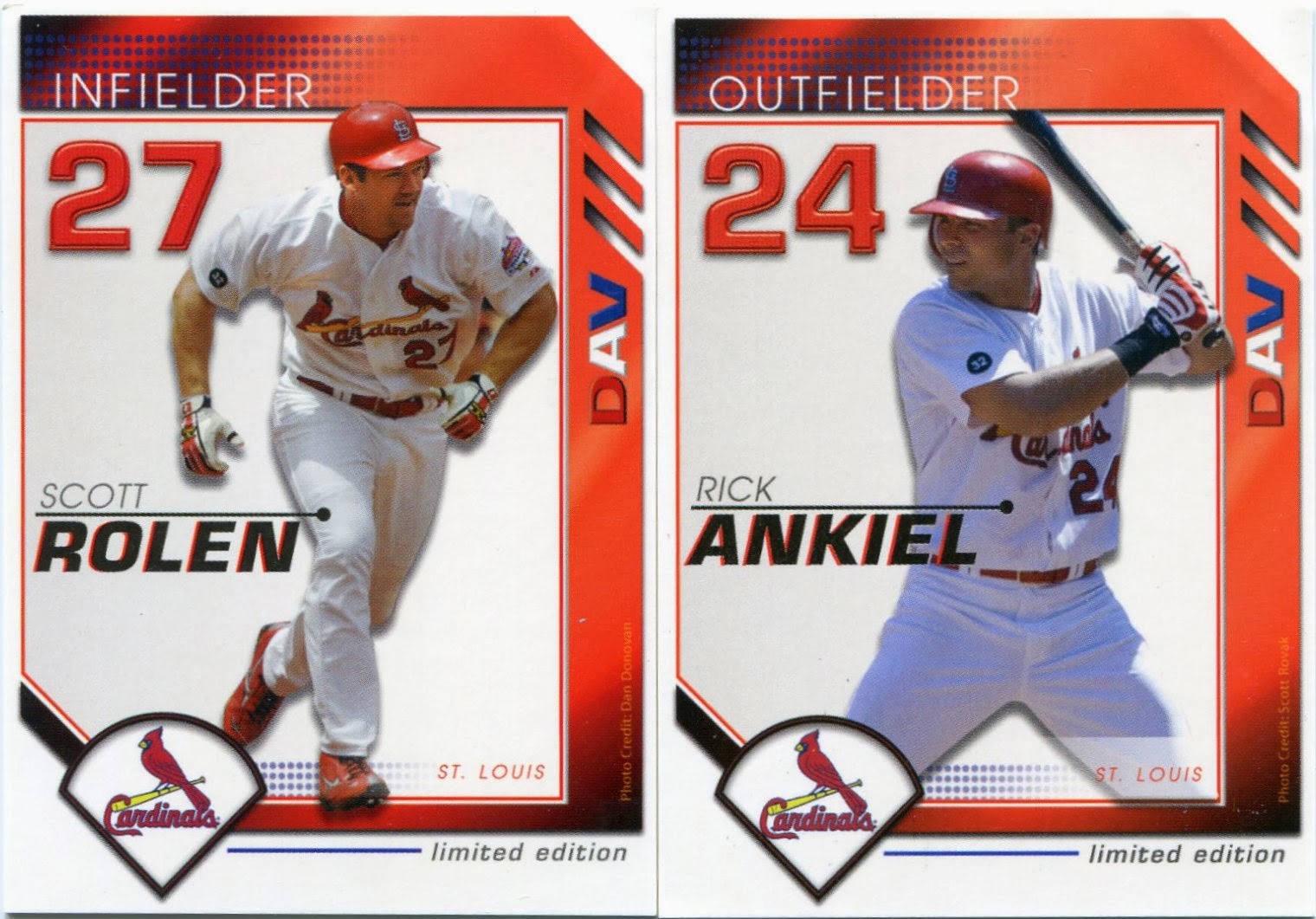 I'm not sure if I'm alone in this way of thinking, but my player collections do indeed have tiers.

Though he's enshrined as a "binder guy", Scott Rolen is probably near the lower tier. I don't go out of my way to chase down cards of his, though I'll gladly take any interesting or otherwise cool ones. I think this neat oddball Kerry sent along certainly qualifies.

Rick Ankiel, on the other hand, is easily among the upper tiers of my player collections. I remember his can't-miss days as a Cardinal prospect, as well as his shocking flame out just a few years later.

One of the more feel-goods stories of my time as a baseball fan has to be Ankiel's monumental return to the game as an outfielder after pretty much falling off the face of the Earth as a pitcher.

It wasn't a publicity stunt, either. He's lasted in the bigs, playing for both the Astros and Mets in 2013.

Amazing stories like Rick Ankiel's certainly help when it comes to deciding who to collect. 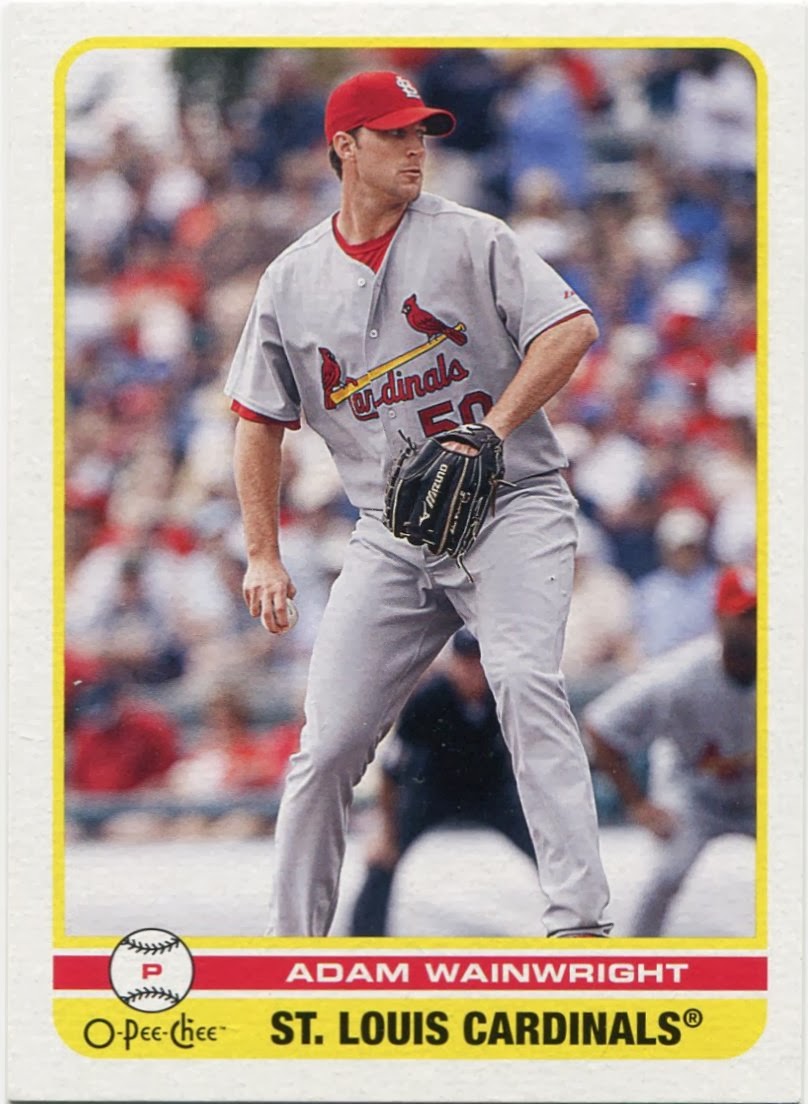 The bulk of this trade package, however, belonged to Adam Wainwright.

Though he's been a star for quite a while now, I just decided to start collecting the Cardinals ace a few months ago. Like Ryan Dempster, I'm not exactly sure what took me so long.

Kerry recently listed all of his extra Wainwrights on his blog, and I claimed all of them. I can have kind of a hoarding mentality when I decide to start a new player collection.

So, how many Wainwrights are we talking here? 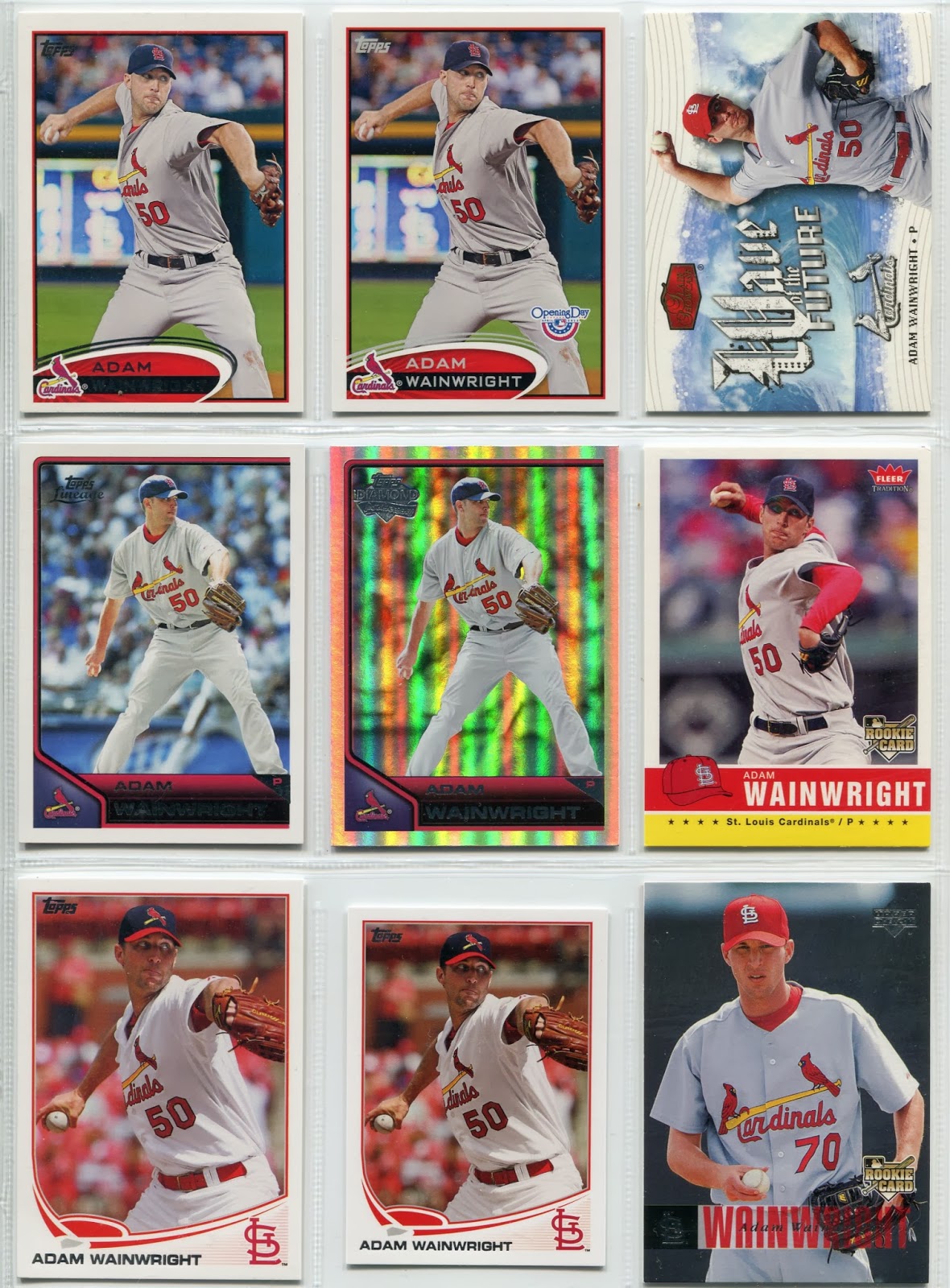 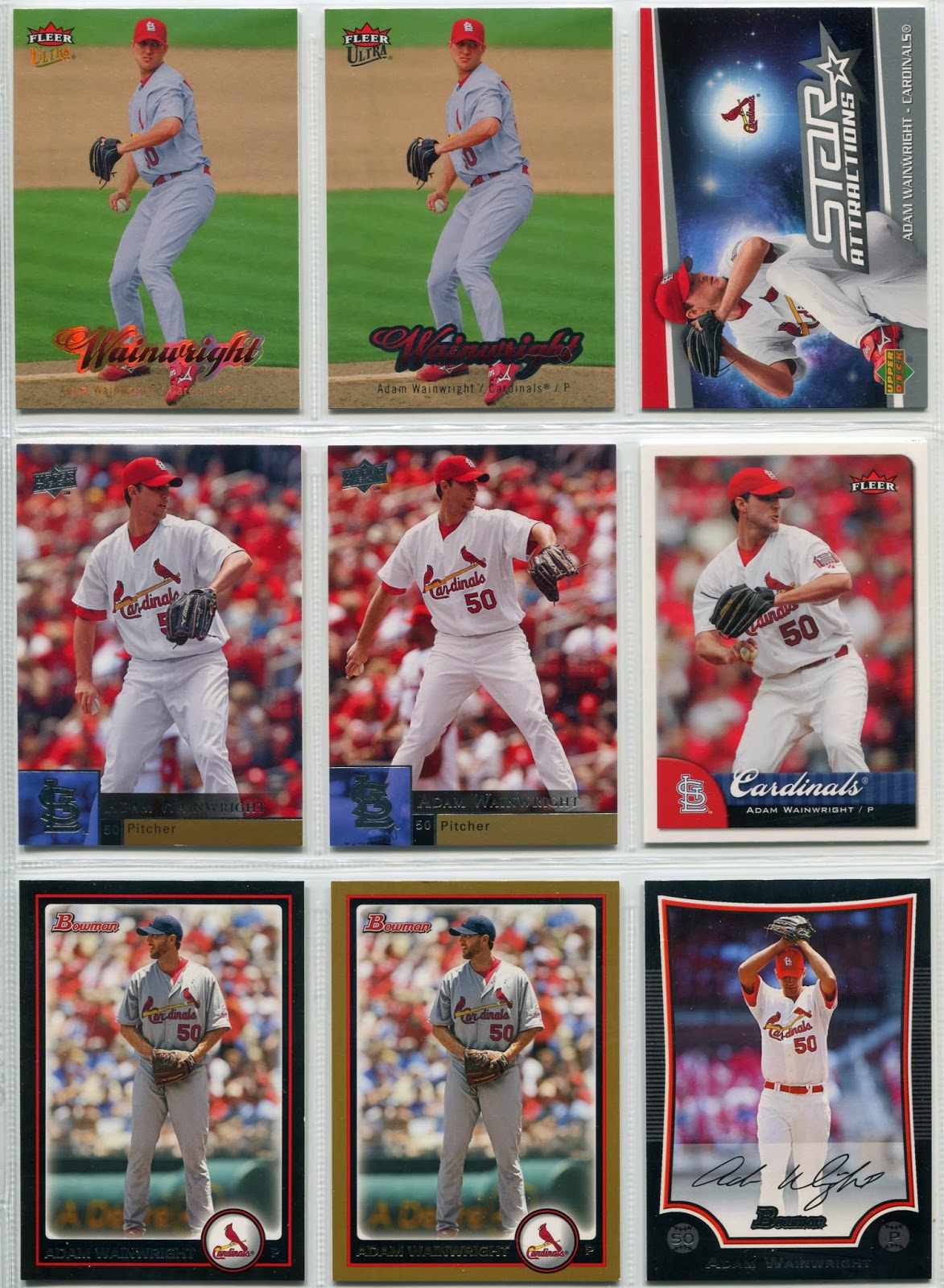 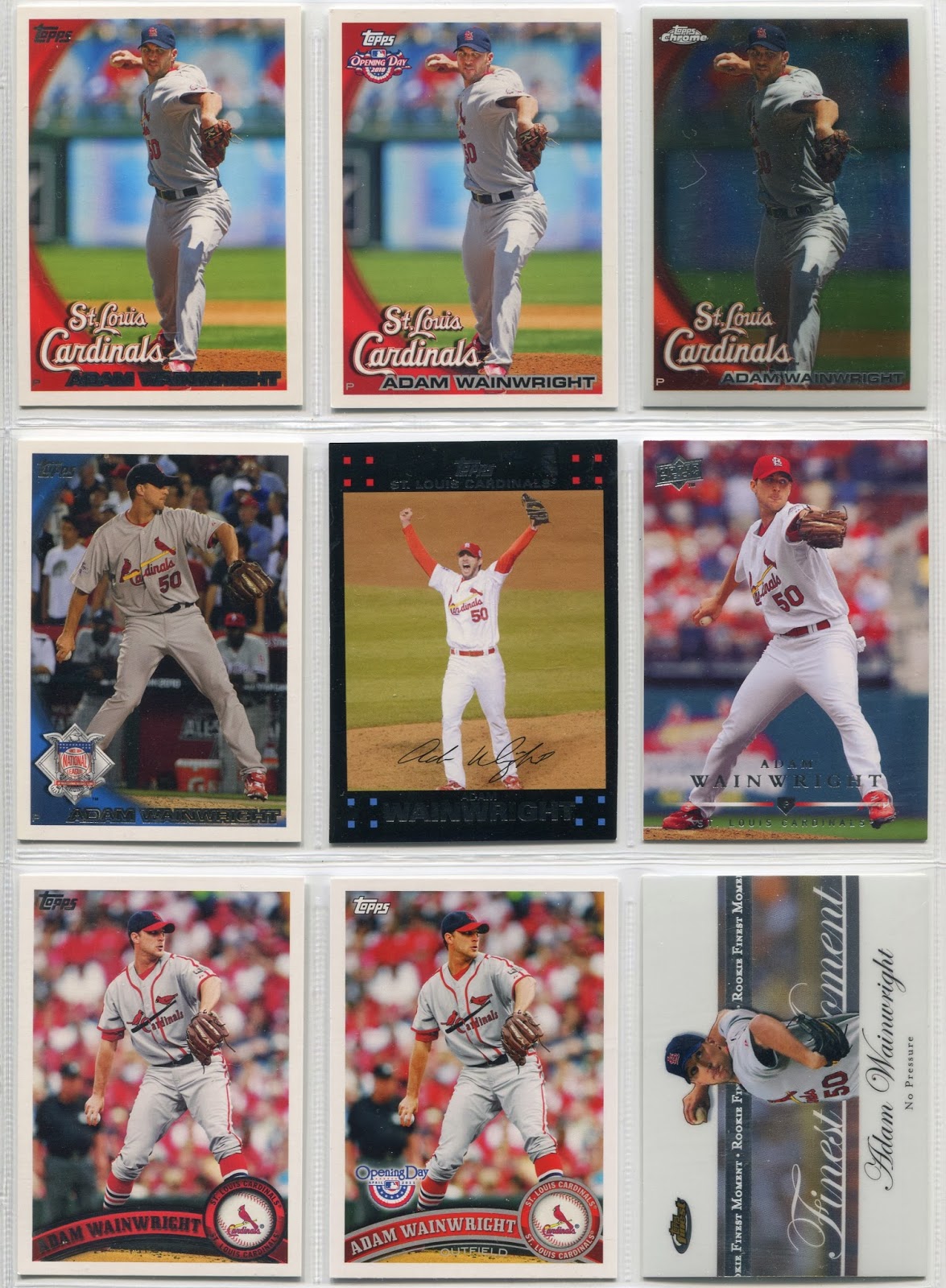 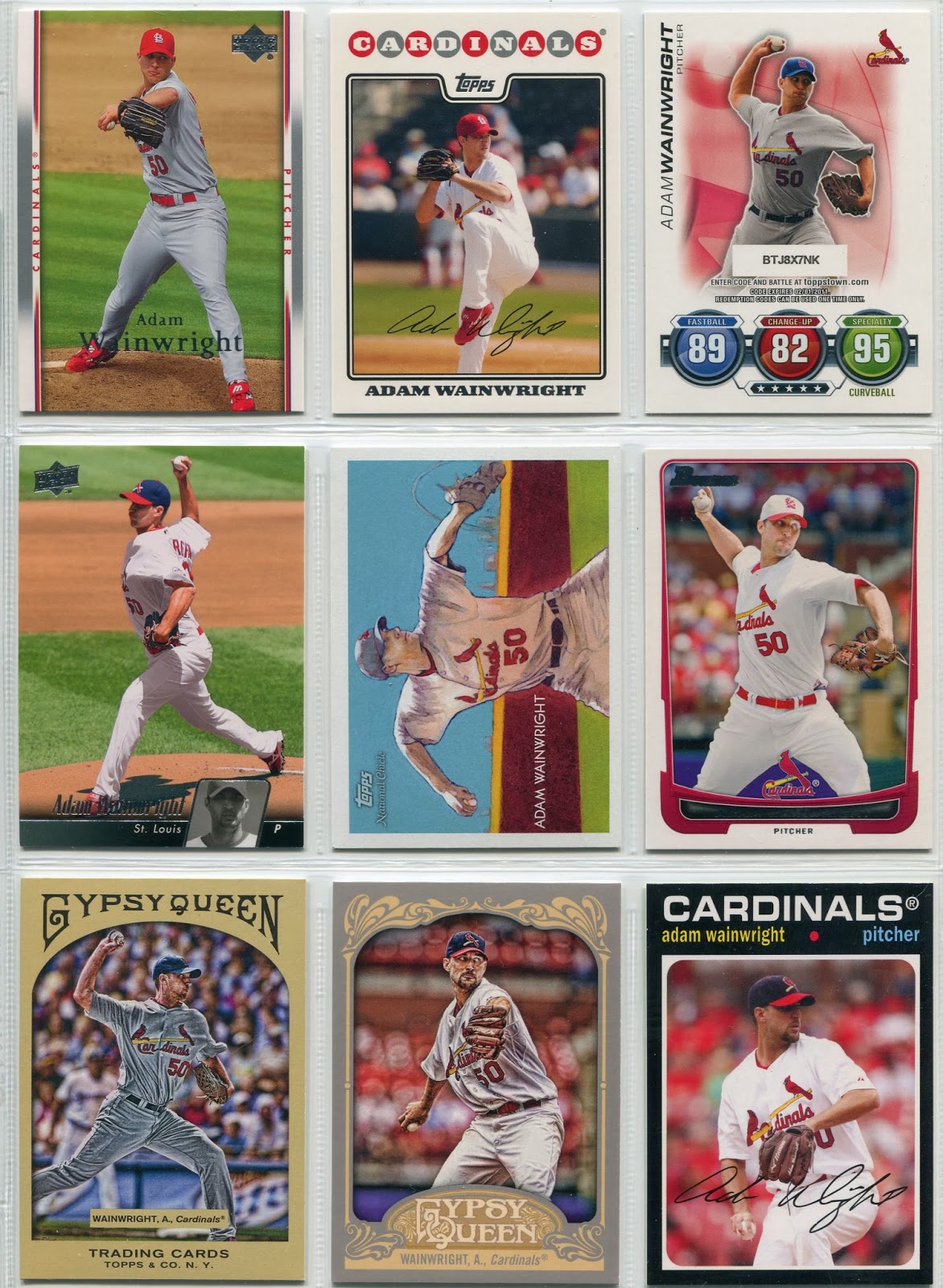 Thanks to Kerry's trade package, my Wainwright collection went from seven cards to forty-three in one fell swoop.

That's a little over a 600 percent increase.

He even quelled some of my cardboard OCD by sending a few cardboard "couples", such as the 2011 Topps Flagship and Opening Day combo or the 2013 Topps and Topps Mini pairings. Those always look awesome in a binder.

Congrats, Mr. Wainwright. You're now in a class of a couple hundred fellow player collection inductees.

That's one of the great things about player collecting. I have a couple hundred collections, but other people may only have one or two.

It really doesn't matter how you do it.

You can collect any way you want.
Posted by Nick at 2:12 PM

I only collect Rockies cards, but they in a binder by player. So am I a Rockies collector, a player collector, both, or neither? I think of myself as a team collector, but I could see it going both ways.

Good breakdown, Nick. Most of my player collections are obvious choices, but I almost cherish the more obscure ones a little bit more.

Nick - I like your selection. Its unique and keeps it interesting. I too like the foreign flavor of cards. I collect anything I can (sport and non-sport) for outside the USA.

I'm sure I can help you with your wantlist, but more importantly, I hope I can surprise you with an oddity.

I started collected Adam Wainwright because my wife loves a some singer named Rufus that shares the same last name. Well, and the fact that he's a great pitcher. Changing the topic, so glad justcommons fixed their error. I love the site. Nothing beats their prices on cards and shipping. Its been the only place I can pick up commons at a reasonable price. I hope it stays around.