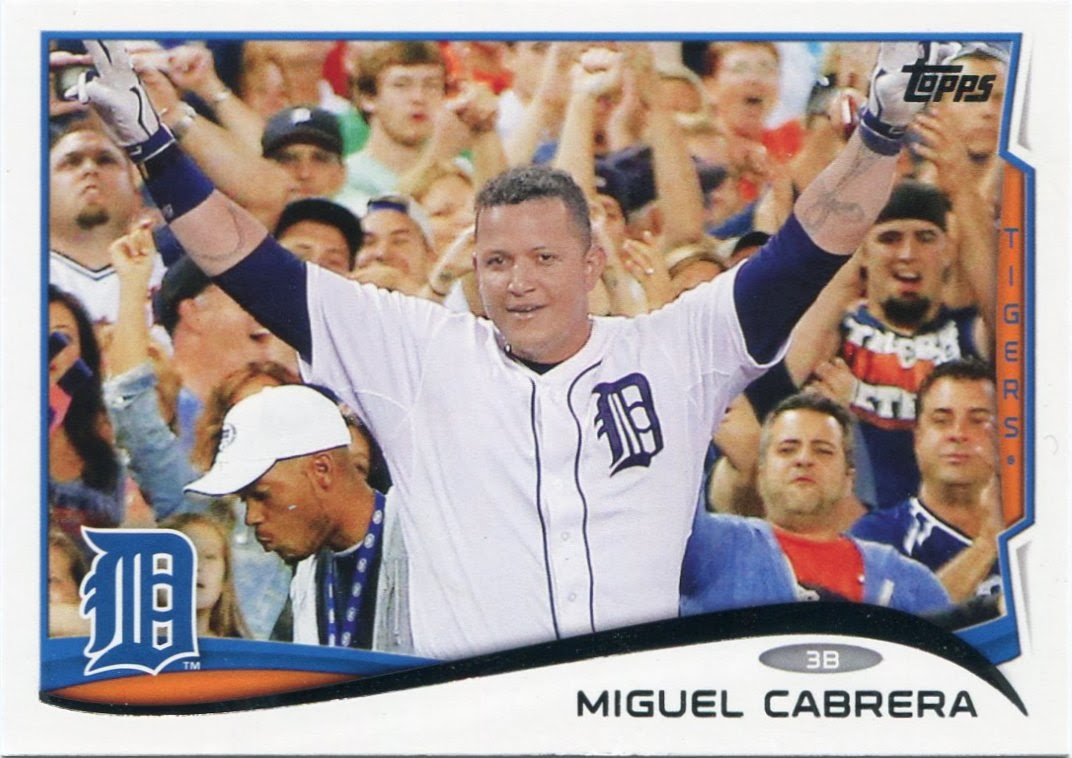 Welcome, my friends, to another episode of "Repack Wars".

In the first installation of this series, I had two Target repacks grind it out against one another. While that was a fun and intense battle, we're going to change up the format a bit this time around.

This past weekend, my dad let me go on a little Target card aisle shopping spree because...well, I'm not quite sure why. Though I said such a treat wasn't necessary, my ever-generous dad insisted.

After all was said and done, we'd picked out five loose packs and a rack pack of 2014 Topps. And a 100-card repack, of course. I had to satisfy the intense repack kick I've been on lately.

So, in a match that's sure to be a fight to the finish, we'll be pitting that repack against a formidable opponent from the "latest and greatest" in the hobby, 2014 Topps.

While I may have changed up the opponents, the point system will still be the same, in that there won't be a set point system. My scoring will be rather willy-nilly.

Without further ado, let's dig into the latest edition of "Repack Wars".

We'll start with the five loose packs and the rack pack of 2014 Topps, which gets off to a strong start with this spectacular shot of the two-time American League MVP, Miguel Cabrera.

I don't think there's any denying that he's the best player in the game right now. 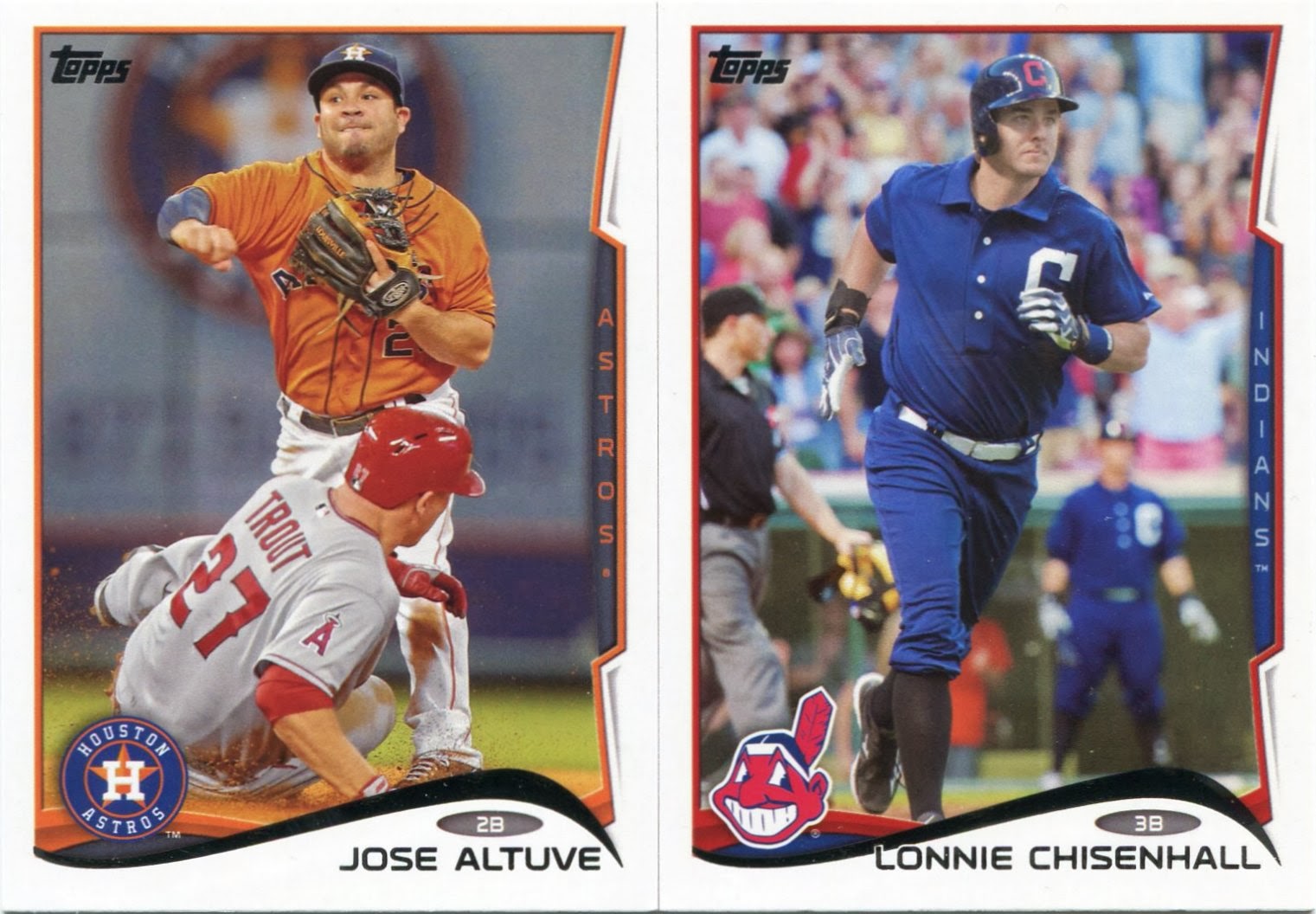 These are both tremendous mini-collection adds.

The Altuve features a nice (though probably contrived) Mike Trout cameo, while the Chisenhall takes the Cleveland franchise all the way back to 1902. The team was known as the Bronchos then.

Although they're awesome uniforms, I still don't know what the heck a Broncho is. 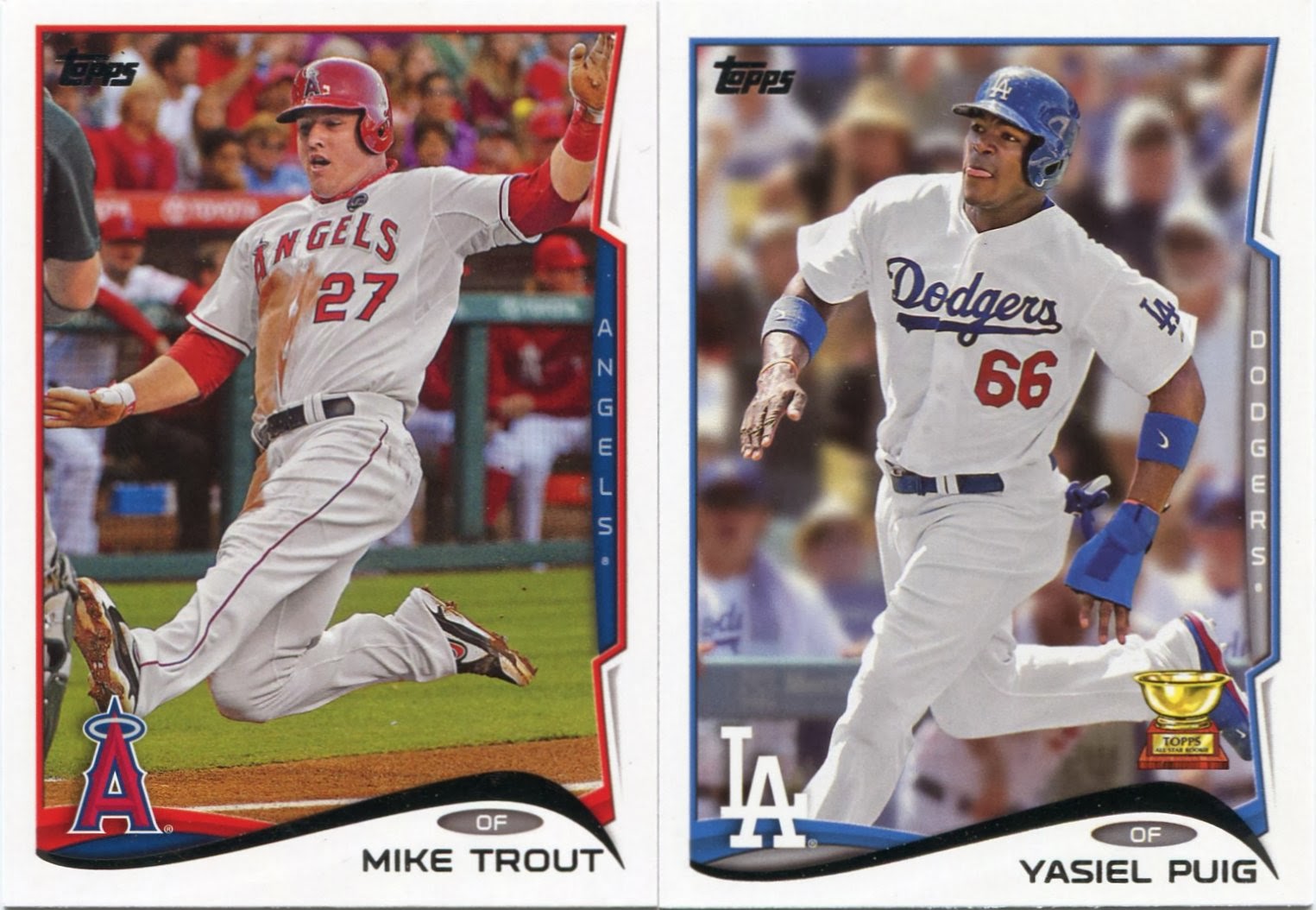 Though his little cameo was nice, I managed to pull Mike Trout's regular Flagship issue as well.

As this year's "cover boy", he's slotted at card #1 in the 2014 checklist. Since Topps leaves the #7 spot in the checklist empty these days in honor of Mickey Mantle, Series 1 is a 331-card set that features 330 cards.

I guess you could call these the bookends of Series 1. 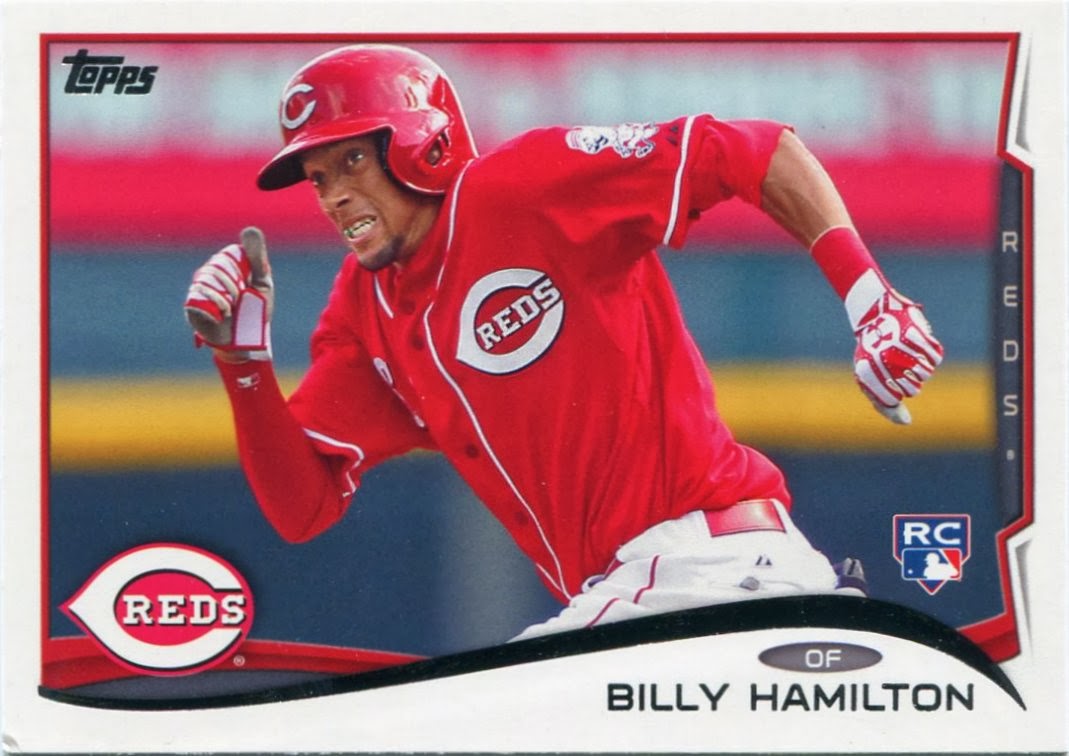 Between guys like Cabrera, Puig, and young Billy Hamilton, I was lucky enough to pull quite a few big names in these retail breaks.

The only downside I can see is the fact that a few of the cards from my rack pack had dinged corners. Now, I'd normally dock points for something like that. However, since I'm keeping this one for myself anyways, it doesn't much matter to me.

I'm just glad to add Mr. Hamilton to my binders. 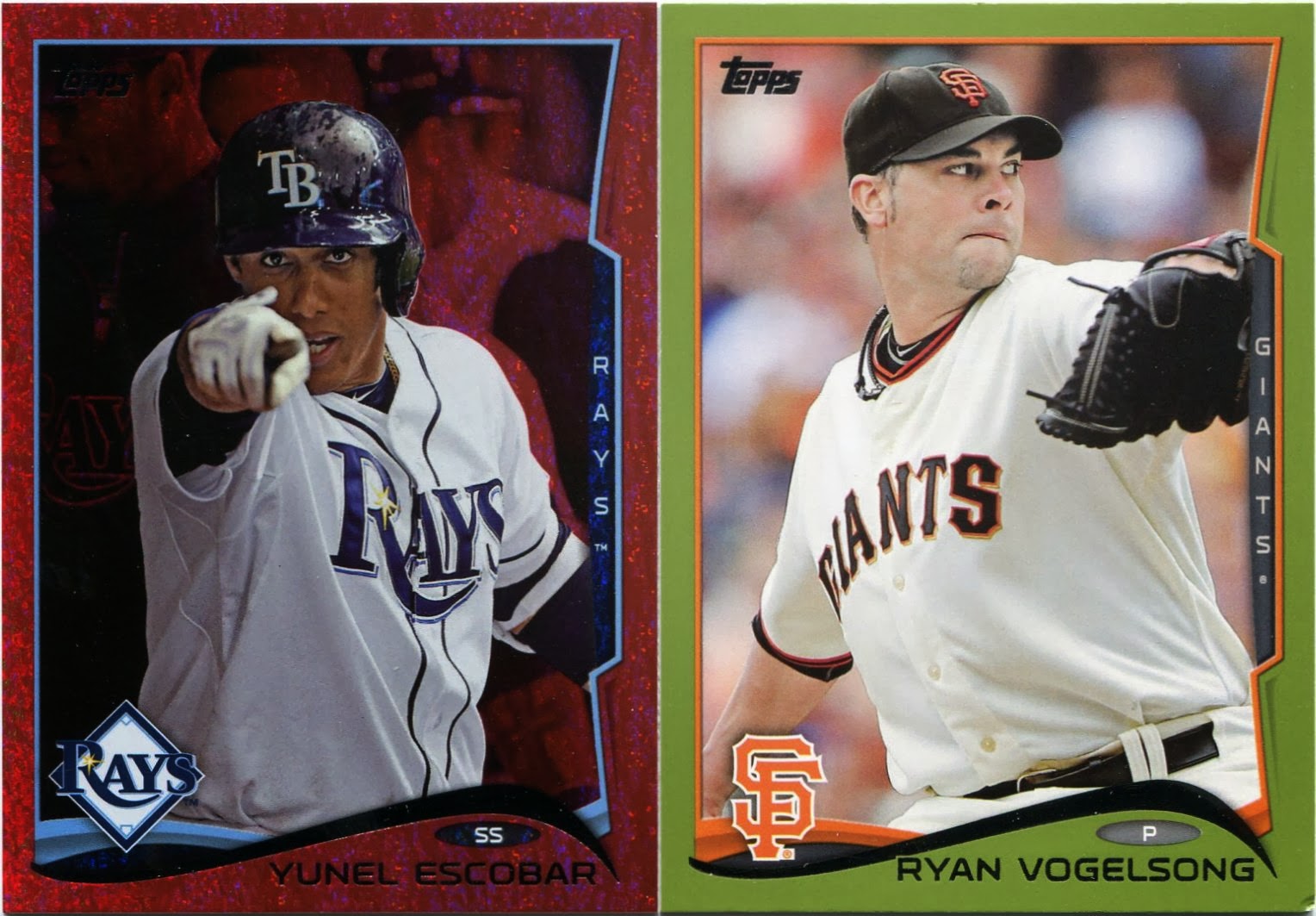 I normally have dismal luck when it comes to pulling parallels I actually need.

Not this time, though. I pulled what another blogger might call the "Blood Rain" Yunel Escobar parallel, one of the better cards in this year's checklist. While Mr. Vogelsong also came with a dinged corner, I'm starting to warm up to the "greenies" nevertheless.

It feels good to finally have a little parallel luck on my side. 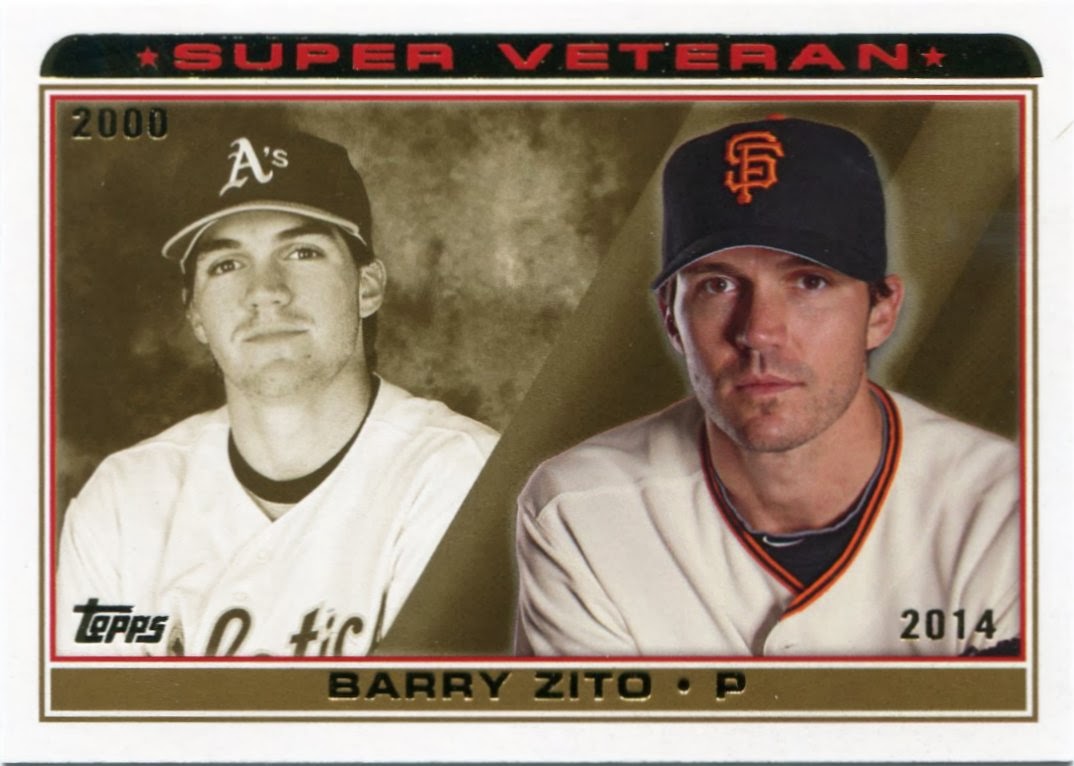 My insert pulls weren't half bad, either.

I've decided that I'm going to go after all fifteen of this year's "Super Veteran" inserts, a set that I hope to have put to bed by the time Series 2 hits the shelves.

I think this Zito is the third one of these I own at the moment.

What a difference fourteen years makes, am I right? 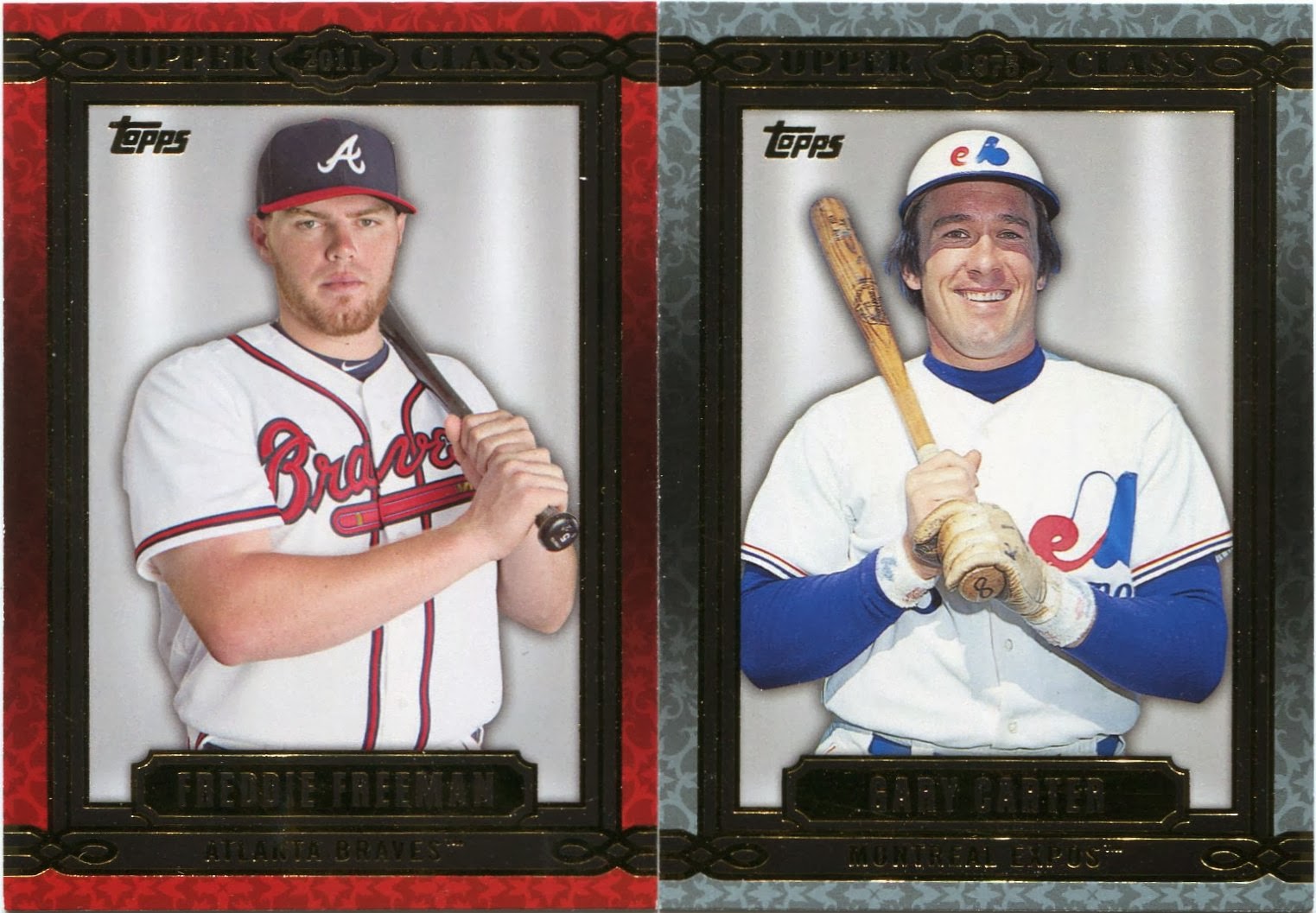 There always seems to be one Flagship insert series every year that gradually earns my respect after a while.

I didn't like these "Upper Class" things at first, but I'm slowly starting to come around. I don't love them by any means, but I don't think I gave these inserts enough credit during my initial review of 2014 Topps.

Besides, that pull convinced me to add Freddie Freeman, baseball's newest "$100 Million Man", to my catalog of player collections. (Which means I'll gladly take any spares you may have lying around.)

Welcome to the club.

Coming around on "Upper Class", +3 each
New player collection bonus, +5 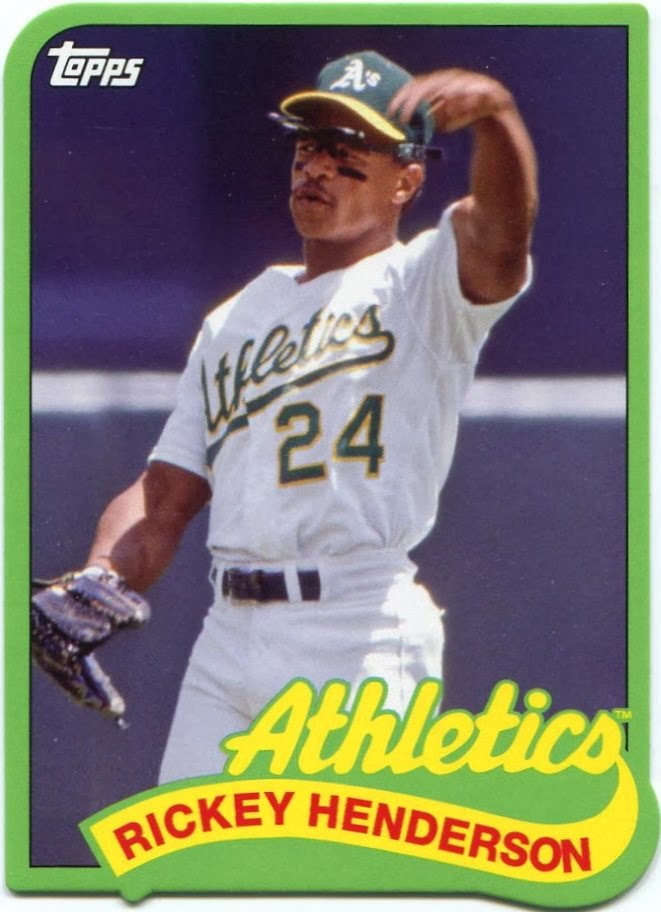 I have to be honest.

I thought more people would like this year's 1989 minis. From what I've read, however, I seem to be in the vast minority.

Their odd die-cut frame has been getting bashed across the board. To me, that quirkiness is what makes these things so darn cool. To each their own, though.

I only pulled one '89 mini from my breaks, but it was a doozy.

I'm always up for new cards of "Rickey". 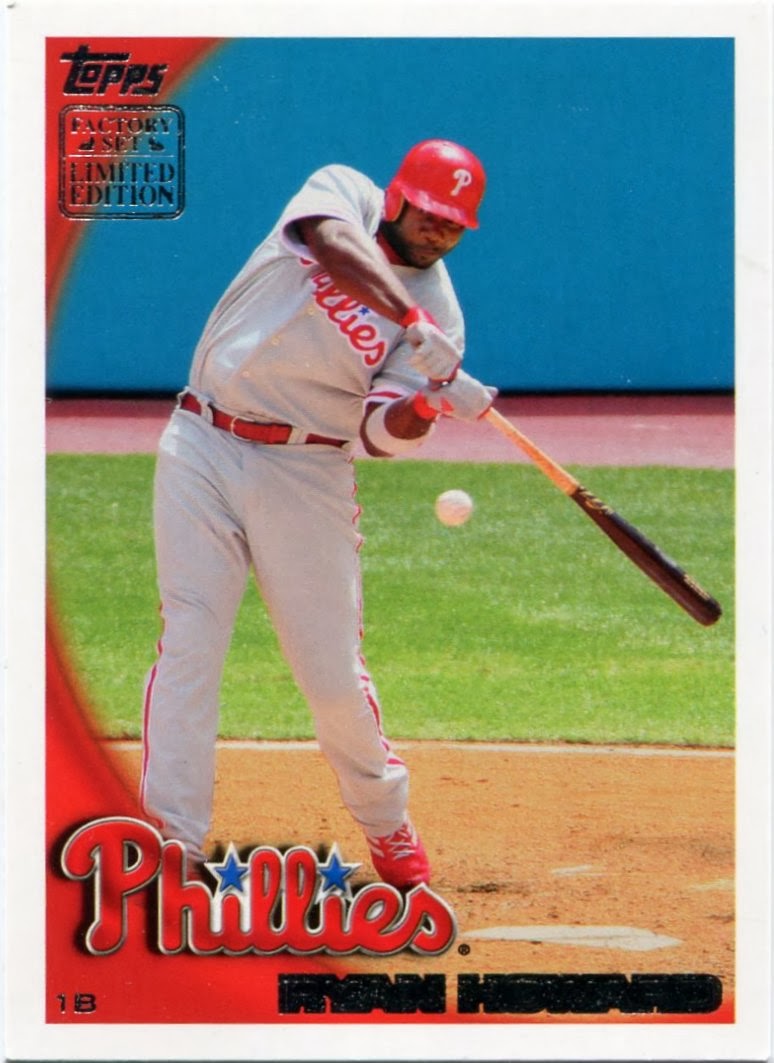 All told, I had better luck with those 2014 Topps packs than most of my recent retail breaks.

This 100-card repack is really going to have to step up its game if it wants to top that.

A few days before I scored my first packs of 2014 Topps, I went to my local Target to see if they'd gotten any of the new product in at that point. I was shut out, but I did take note of one repack that was hanging on the rack.

This cool "limited edition" Ryan Howard was staring back at me through the window of the repack, a card that was only available through factory sets in 2010.

I was saving my money for the "latest and greatest" at the time, so I passed on buying the repack at that point, hoping that it'd be around after I quenched my 2014 thirst.

Luckily, when my dad and I went back to Target this past weekend, it was still there. This time, I happily grabbed Mr. Howard and his friends.

I couldn't wait to see what other surprises this repack had in store for me. 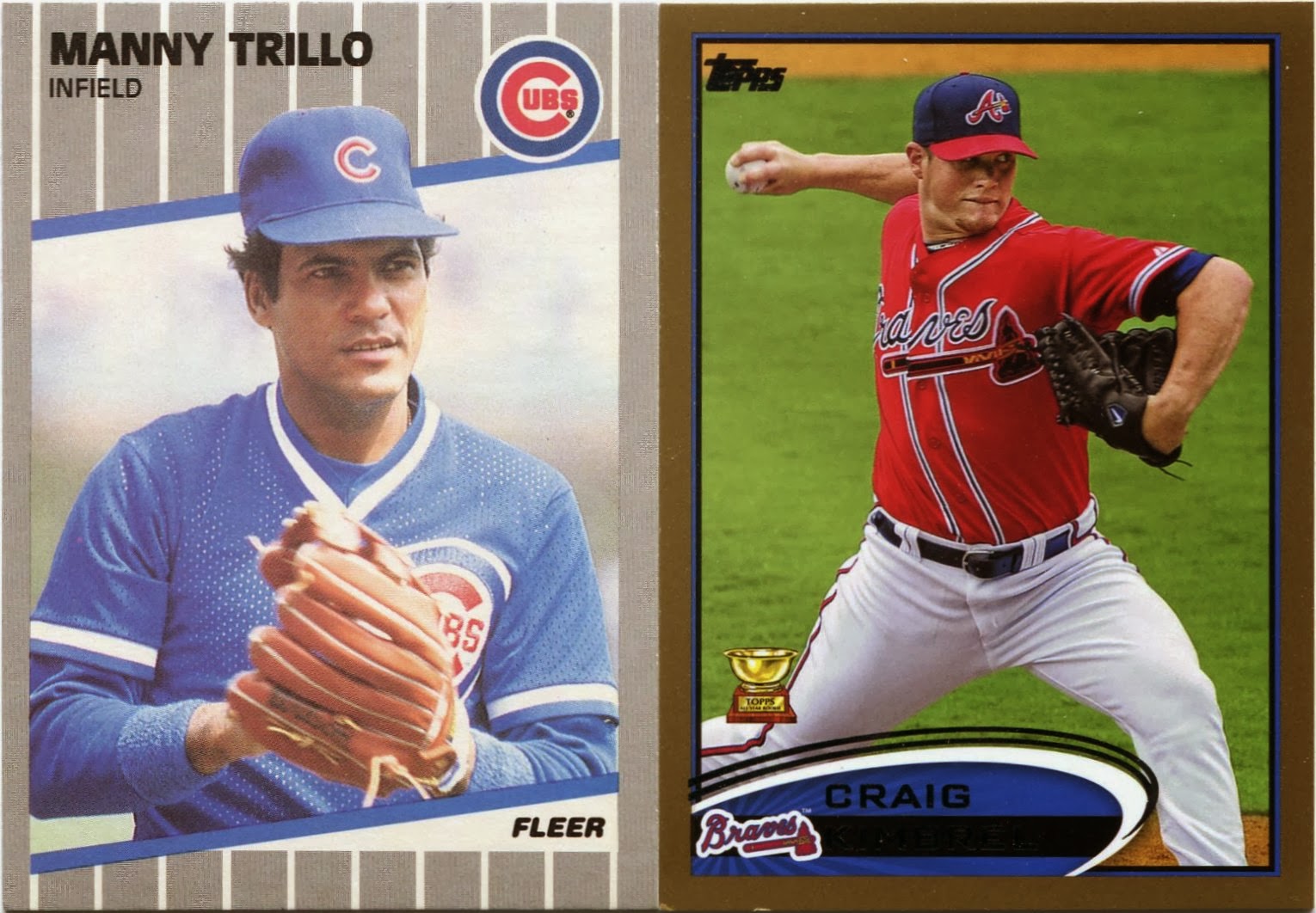 This repack, like others I've bought in the past, came with single packs of both 1989 Fleer and 2012 Topps Update.

Even by overproduction era standards, the pack of '89 Fleer was proving to be a disaster up until the very last card. That's when I found this nifty Manny Trillo, a much-needed piece for my "sunset" collection.

The pack of Topps Update did its best to compete. I nabbed a neat gold parallel of Craig Kimbrel, who happens to be the subject of one of my newer player collections.

With that kind of luck, I had a feeling this repack might well be something special. 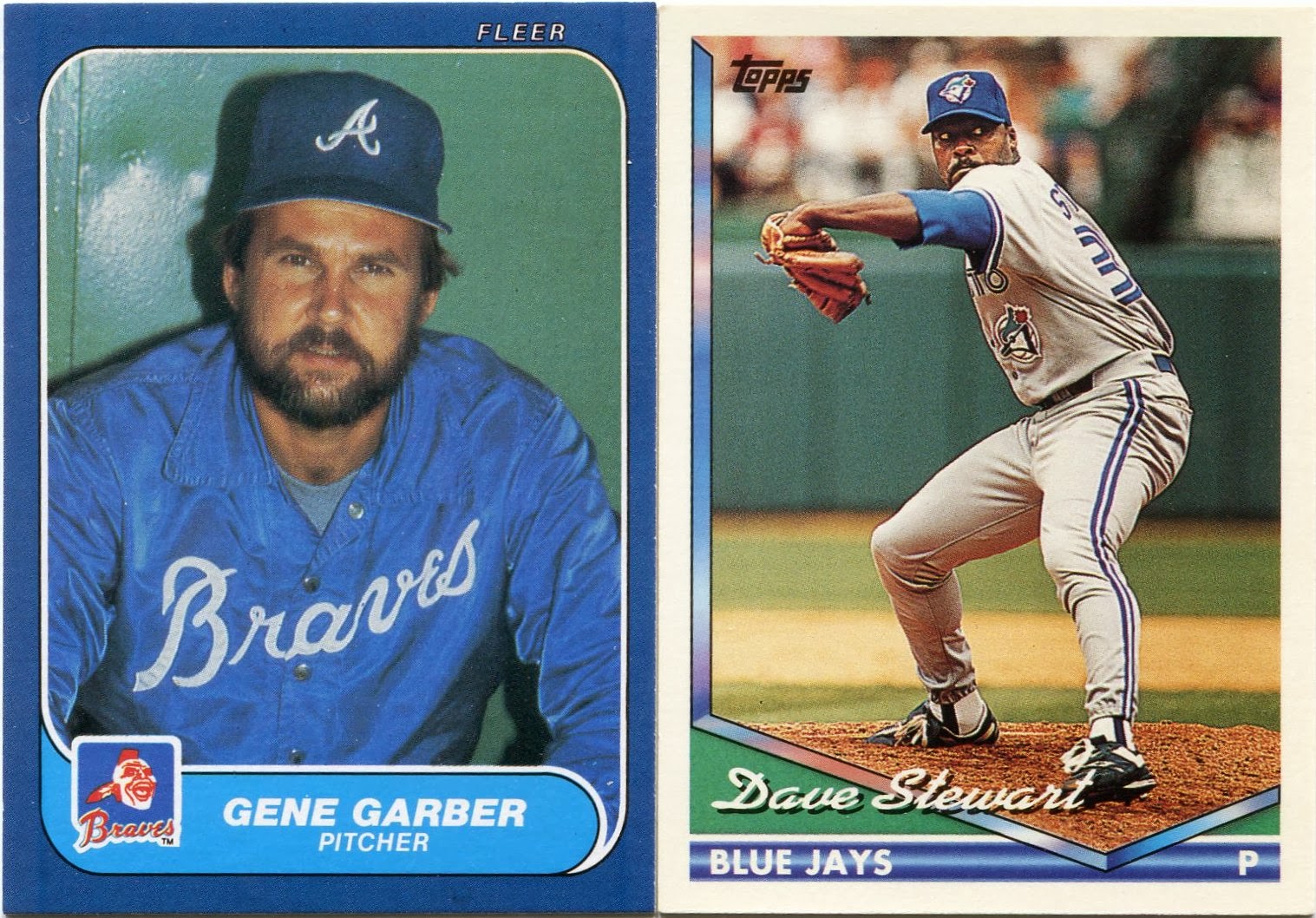 Sometimes, I pull cards from these repacks and wonder how I didn't already have them.

Since I collect both Gene Garber and Dave Stewart, that's how I felt about these two.

Better late than never, +3 each 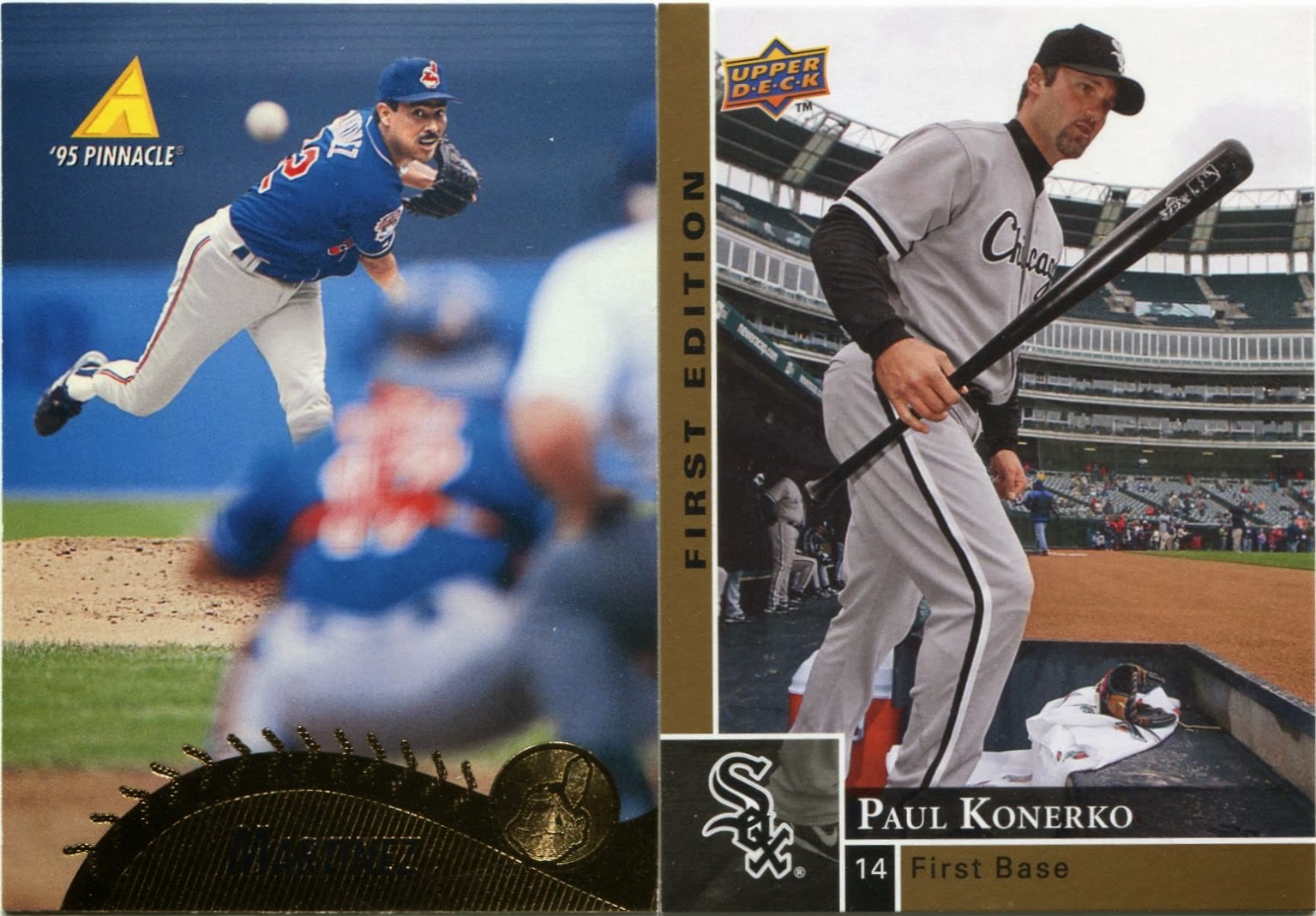 Most of the repacks I've opened offer a wide variety of different sets and designs.

That was most certainly true with this one. It featured everything from 1980 Topps to 1995 Pinnacle to 2009 UD First Edition.

That's the kind of thing you just can't get with your everyday retail breaks. 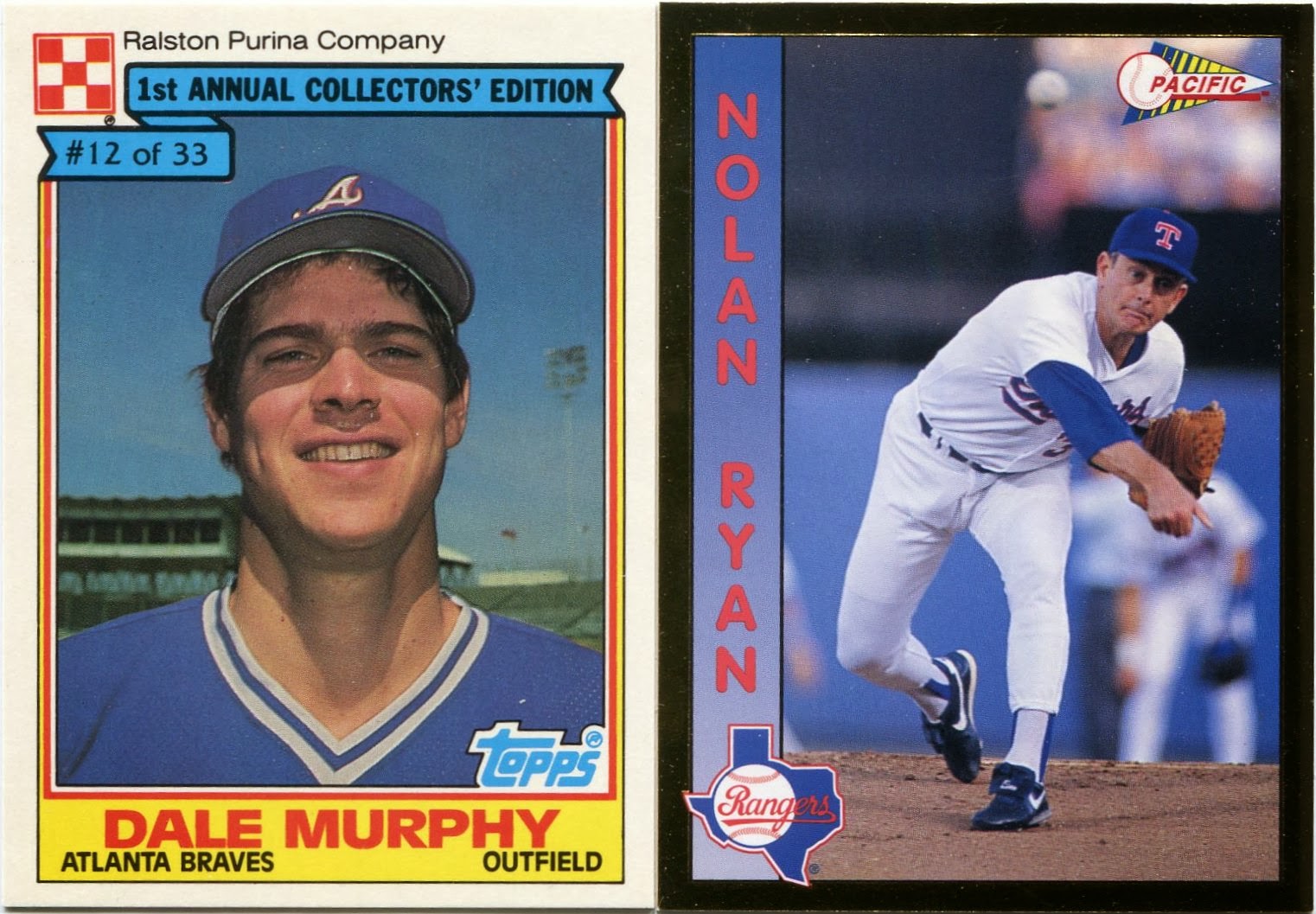 What would a repack be without awesome oddballs? 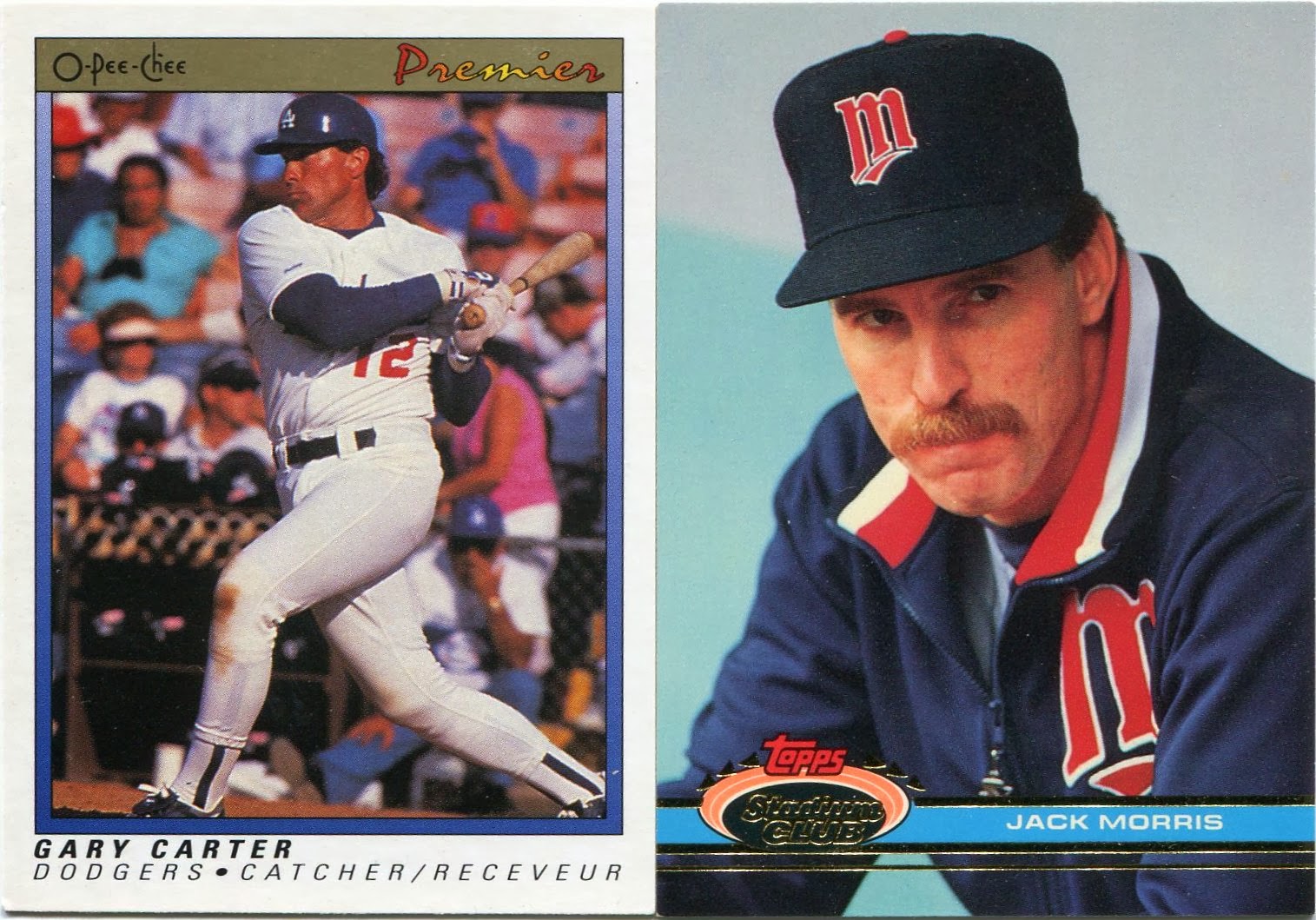 Both of these guys spent just a single year with their respective franchises in 1991.

Jack Morris made his time with the Twins a little more memorable. After making the All-Star team during the regular season, he hurled a legendary 10-inning shutout in Game 7 of the World Series to clinch the Fall Classic for the Twinkies.

Both, however, own prime real estate in my "Short Term Stops" collection.

That's what made these such coveted pulls from this repack. 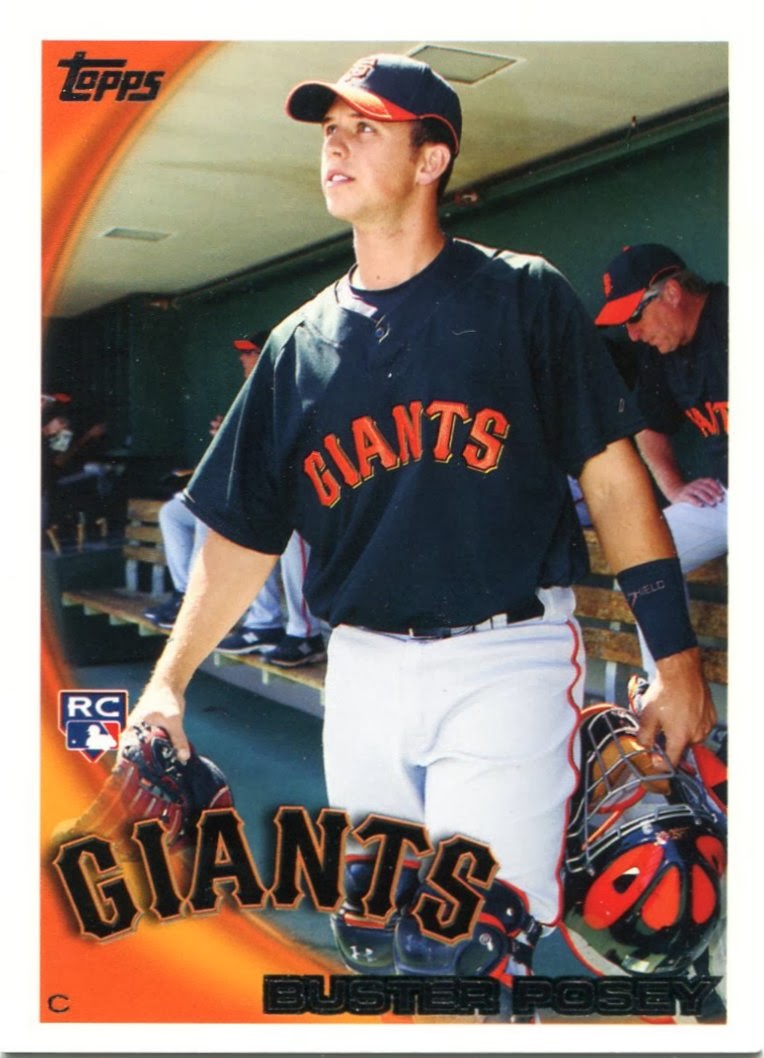 Any hopes that my 2014 Topps breaks would somehow take down this repack were quickly put to bed once I came across this beauty.

This ain't no reprint, folks. This is the real deal. I actually pulled a Buster Posey rookie from your everyday repack.

What makes this even sweeter is the fact that I once owned a copy of this very card. Since it came before I decided to collect Mr. Posey, however, I traded it away. That was about three years ago now, and I've wanted to reclaim that lost piece of my collection ever since.

It sure feels good.

At this point, the drama was over. The repack won. And, depending on your perspective, this Posey rookie may have been the best get from it.

To me, though, it was a distant second. 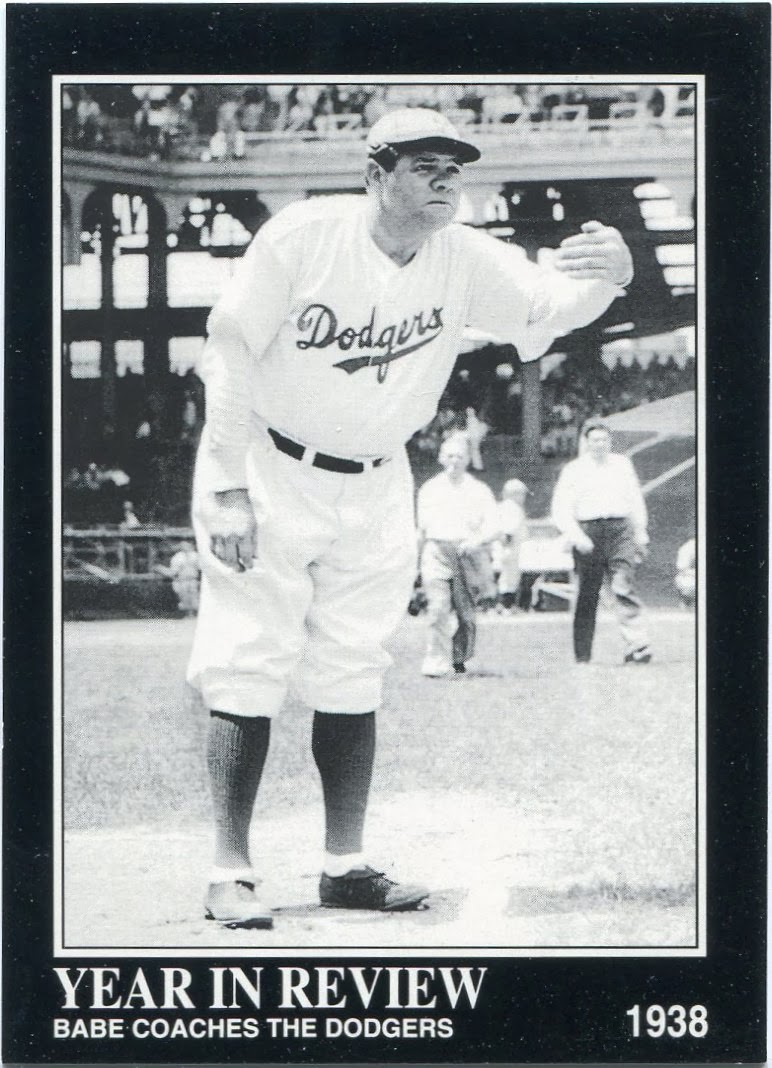 I've pulled a few of these in past repacks.

They hail from an all-Babe Ruth set that the Conlon brand released back in 1992. While the "Bambinos" I'd found in the past were neat, none of them could even come close to matching this one.

I'm a big fan of little quirks or pieces of trivia from the annals of baseball history. One specific thing that sometimes gets lost in the legend of Babe Ruth is the fact that he coached first base for the Dodgers in 1938.

"The Great Bambino" hoped the move would put him on track to realizing his lifelong dream of becoming a big-league manager. However, he left the Dodgers after they gave the gig to Leo Durocher the very next year.

The only other card I own of Ruth in Dodgers gear is a Heritage reprint from a few years ago.

This one, however, is an original piece from the beloved Conlon brand. I very nearly dropped the remaining cards from the repack in amazement when I saw it.

There's no doubt in my mind that this is the greatest card I've ever pulled from a repack.

I wouldn't stop there, though.

It's one of my best pulls ever.

I've never opened a repack better than this one. If I wanted to, I could go out on top and not bust another.

But I'd never do that.

There will always be a repack with my name on it.
Posted by Nick at 7:02 PM

I'm not down on the die cut aspect of the '89 Minis, I just think that they could have picked just about any other set and it would have been better.

I dont need a reason to shoot you a 20-spot for some cards,boy....its always a good time to check 'em out with you!....glad the re-pack worked out so well!

I talked about it yesterday, so I guess it's just you and me that like the '89 die cut minis.

Awesome Ruth! More repacks are in my future.

I like the 89 minis - very colorful. Color is good.