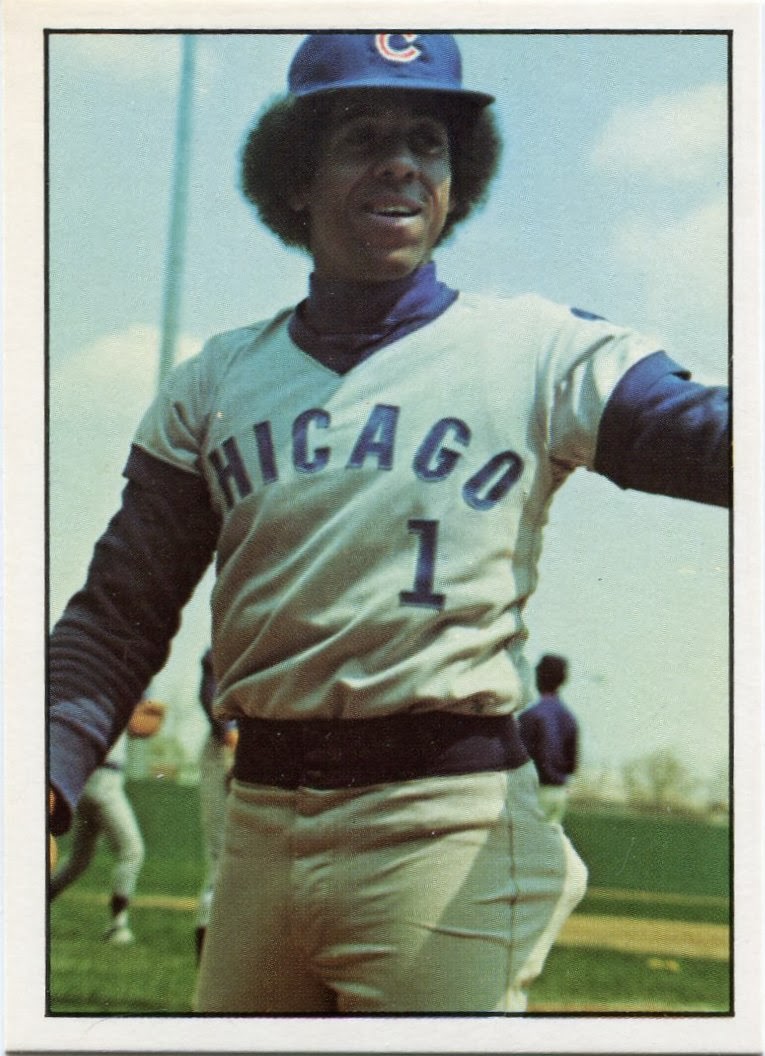 At this point, I've lost track of the number of impulse buys I've posted on this blog.

Let's just say it's been quite a few. Sometimes, it's triggered by discovering an especially awesome card I never knew existed. Other times, I simply have a sudden urge to buy a few select pieces of cardboard.

This time, however, it was triggered by a trade I made with a fellow blogger.

Many of my past impulse buys had absolutely no rhyme or reason to them. Some had everything from a parachuting Kenny Lofton to Wild Bill Hickock.

Thanks to a swap I made with fellow blogger Tom, this one had a special SSPC theme to it.

To me, the 1976 SSPC checklist is like a reservoir that never runs out. The cards are fairly tough to come by, and the checklist is rather large. Because of that, it's unlikely that I'll ever get all the SSPCs I need.

But that doesn't mean I won't try.

After absorbing the spoils of Tom's SSPC bonanza, I went off to Sportlots to track down a few more beauties.

To my surprise, many of the SSPCs were priced at a measly 18 cents a piece, including the awesomely 'fro-tastic Jose Cardenal you see above. 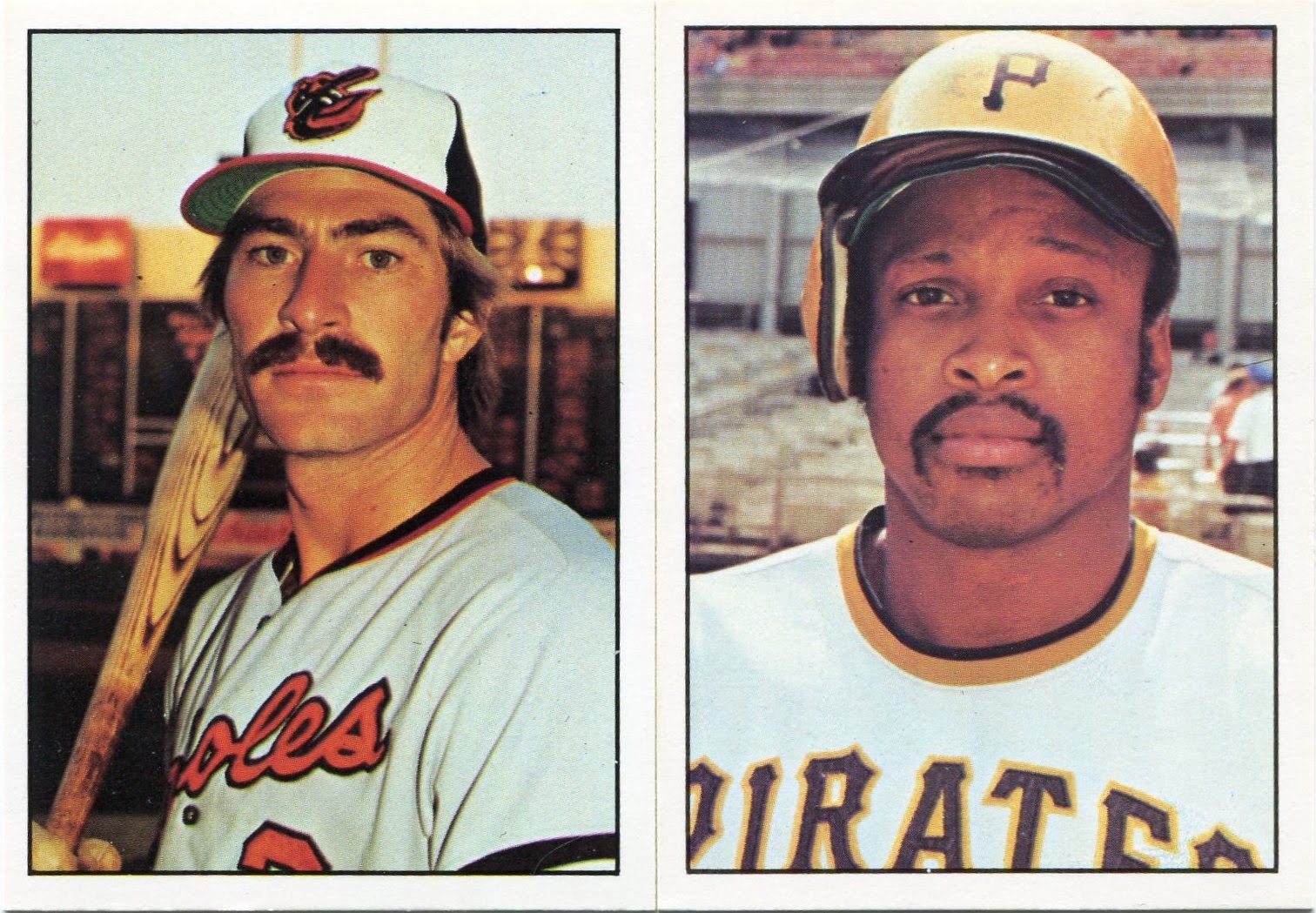 Since 1976 SSPC was released in the heart of the '70s, you're bound to see a lot of facial hair pop up on these things.

Both Bobby Grich and Al Oliver, two of the more underrated players from the decade, are sporting some mean mustaches here. From what I've seen of his cardboard, Grich would be an inaugural member of the hirsute Hall of Fame.

And I'm happy to report that Mr. Oliver still had some facial hair going when I met him a few years ago. 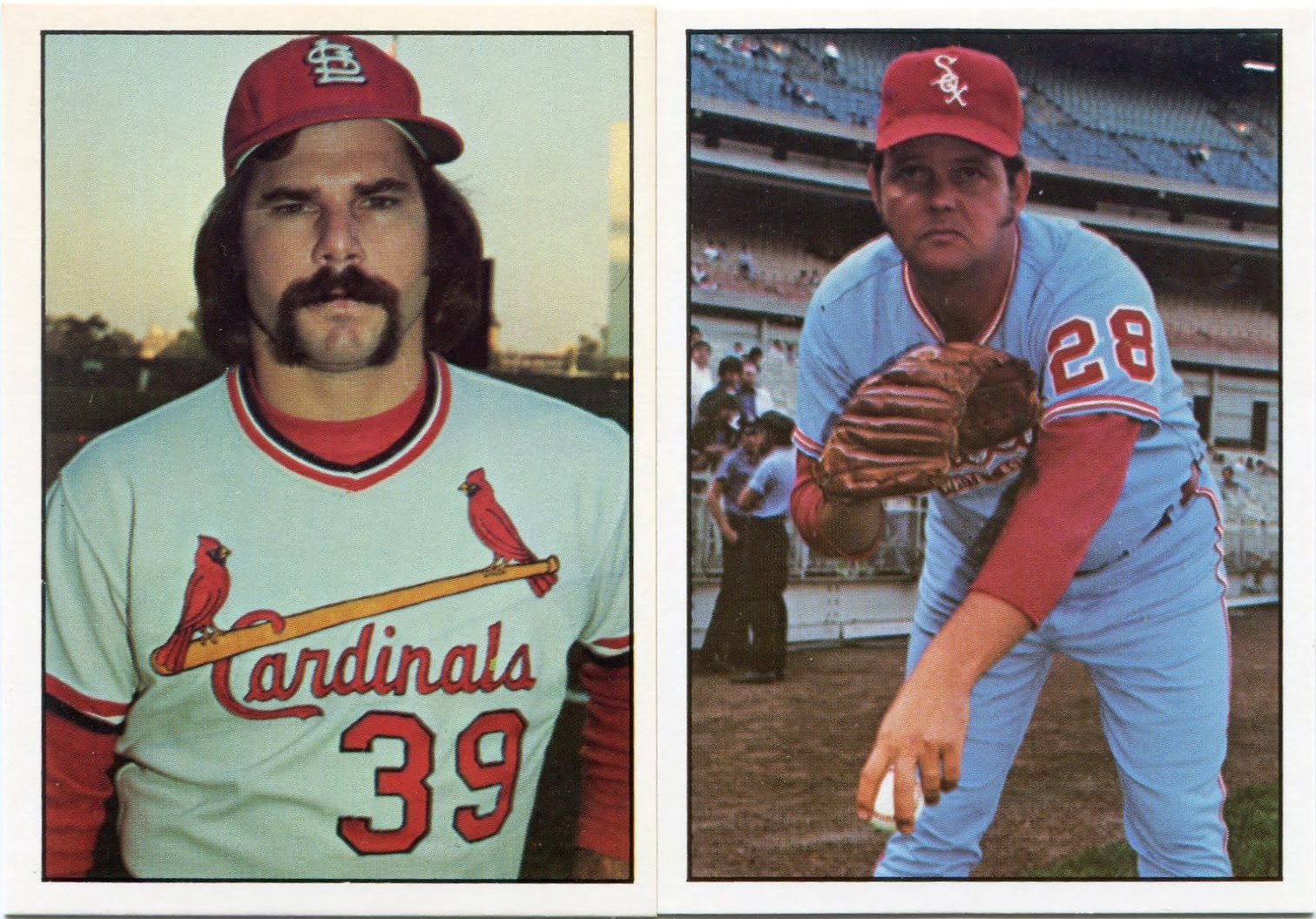 That said, it's tough to beat the Fu Manchu of Al Hrabosky.

His epic facial hair was in full force by the time 1976 rolled around.

To my knowledge, Wilbur Wood never sported a mustache. But, prior to receiving his '76 SSPC single, I'd never noticed that he sported some major sideburns back in the day.

Because his name sounds like something out of the 1800's, it's hard to imagine a guy like him with such flashy facial hair. 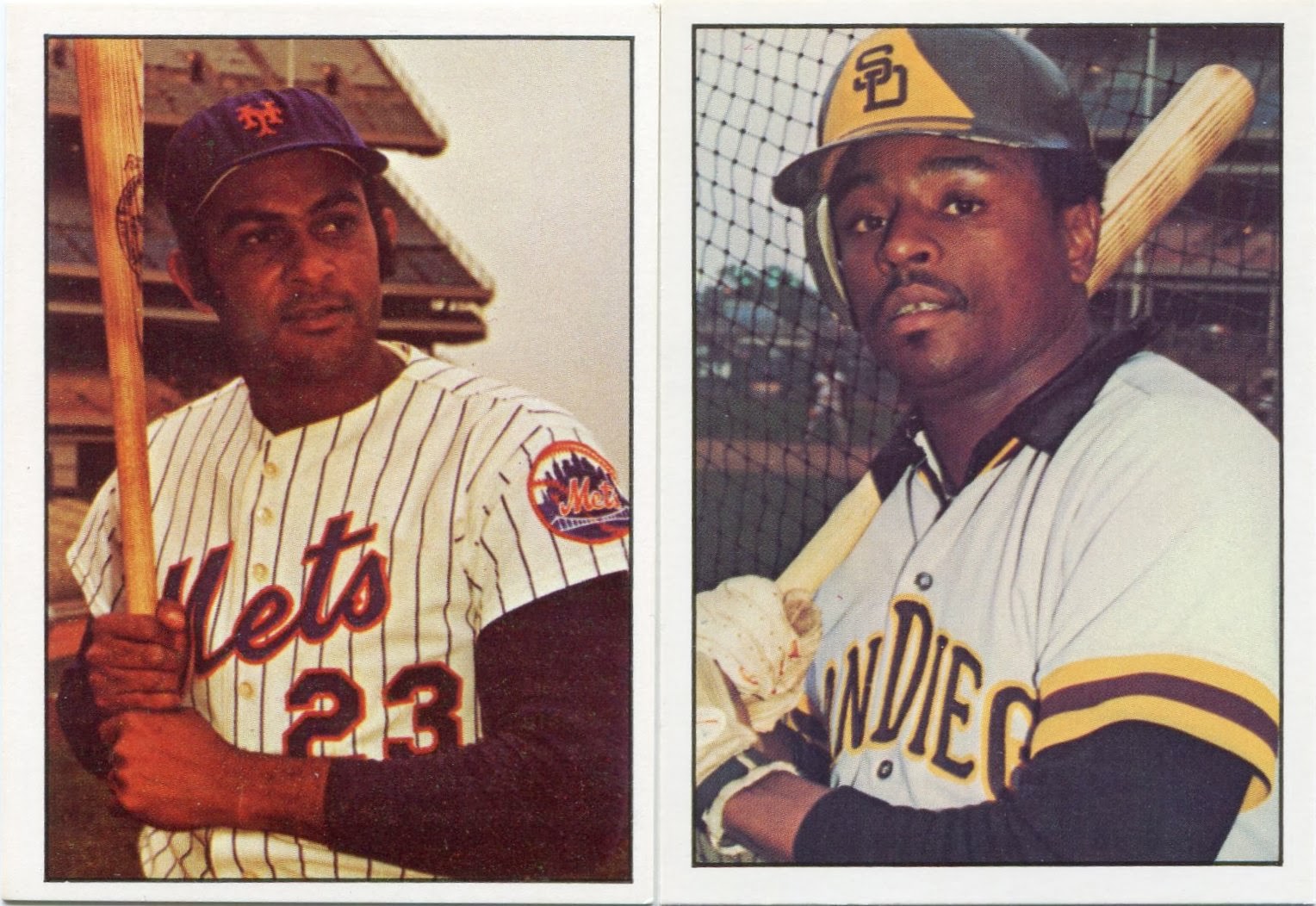 Well, I inadvertently turned this impulse buy recap into a post about facial hair.

Of course, the main reason I bought cards of guys like Cardenal, Oliver, and Hrabosky are because they're all some of my favorite players from the '70s.

While Jesus Alou and Tito Fuentes are also some of my more highly regarded '70s player collections, the "unfamiliar uniform" factor caused these two to sneak into my latest impulse buy.

Alou spent a single season with the Mets, largely coming off the bench during his time with the club.

Fuentes, meanwhile, actually spent two seasons with the Padres. For some reason, I had it in my head that he only played one year in San Diego. To me, Fuentes is burnt into my memory as a Giant.

Although he was known as a bit of a hot dog during his career, seeing Fuentes in the mustard-yellow of the Padres is still quite unfamiliar to me. 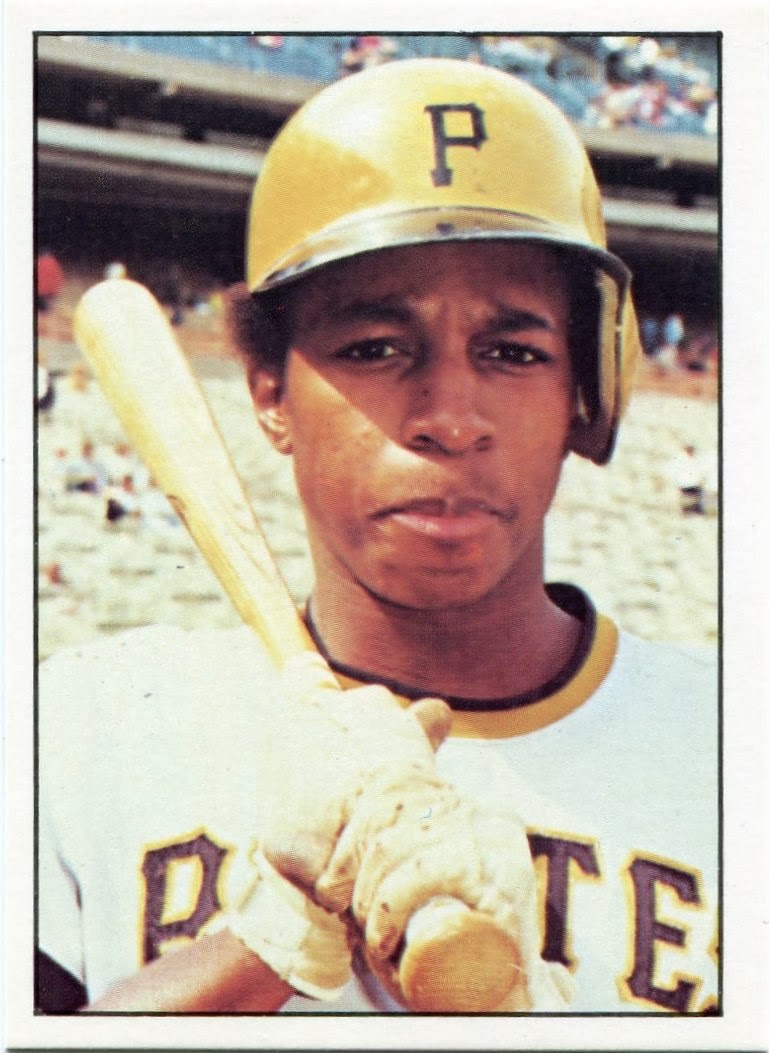 The real reason behind this entire impulse buy, though, was this card.

As of right now, my unquestioned "white whale" is a 1952 Topps Hoyt Wilhelm rookie.

But, since those often go for upwards of a thousand dollars, I have a few smaller "white whales" lurking underneath the surface. (If it's even possible to have a mini "white whale", that is.)

This Willie Randolph was one of those. At a whole 50 cents, it cost a bit more than the rest of the cards from this impulse buy. Well worth it, though, to say the least.

To my knowledge, it's the only solo card to feature Randolph as a Pirate. He spent 30 games with the '75 Bucs as a rookie before being dealt to the Yankees.

I'm well aware of Randolph's "official" 1976 Topps multi-player rookie card. Though I'd love to track down a copy of it one day, this SSPC issue was way more of a priority for me.

In my collection, all multi-player cards go into my "miscellaneous" stack, one that includes my various league leader, multi-team, and other random goodies.

Though I cherish miscellany, this beauty gets to go straight into my Pirates team binder.

Without SSPC and this solo rookie card, that would never have been possible.

After years of waiting, I finally managed to spear one of my cherished "white whales".

If you ask me, controlling your impulses is overrated.
Posted by Nick at 2:07 PM

I need to get my hands on some SSPC. As a kid they were "that wierd set in the middle of the 70's". But now I think they're pretty awesome. There are quite a few of my PCs in there I'm sure.

These cards are great

Very Nice! Impulse buys are among my favorites. I always think I'm going to regret the purchases but whenever I look back, I always say "Glad I pulled the trigger on that one!"