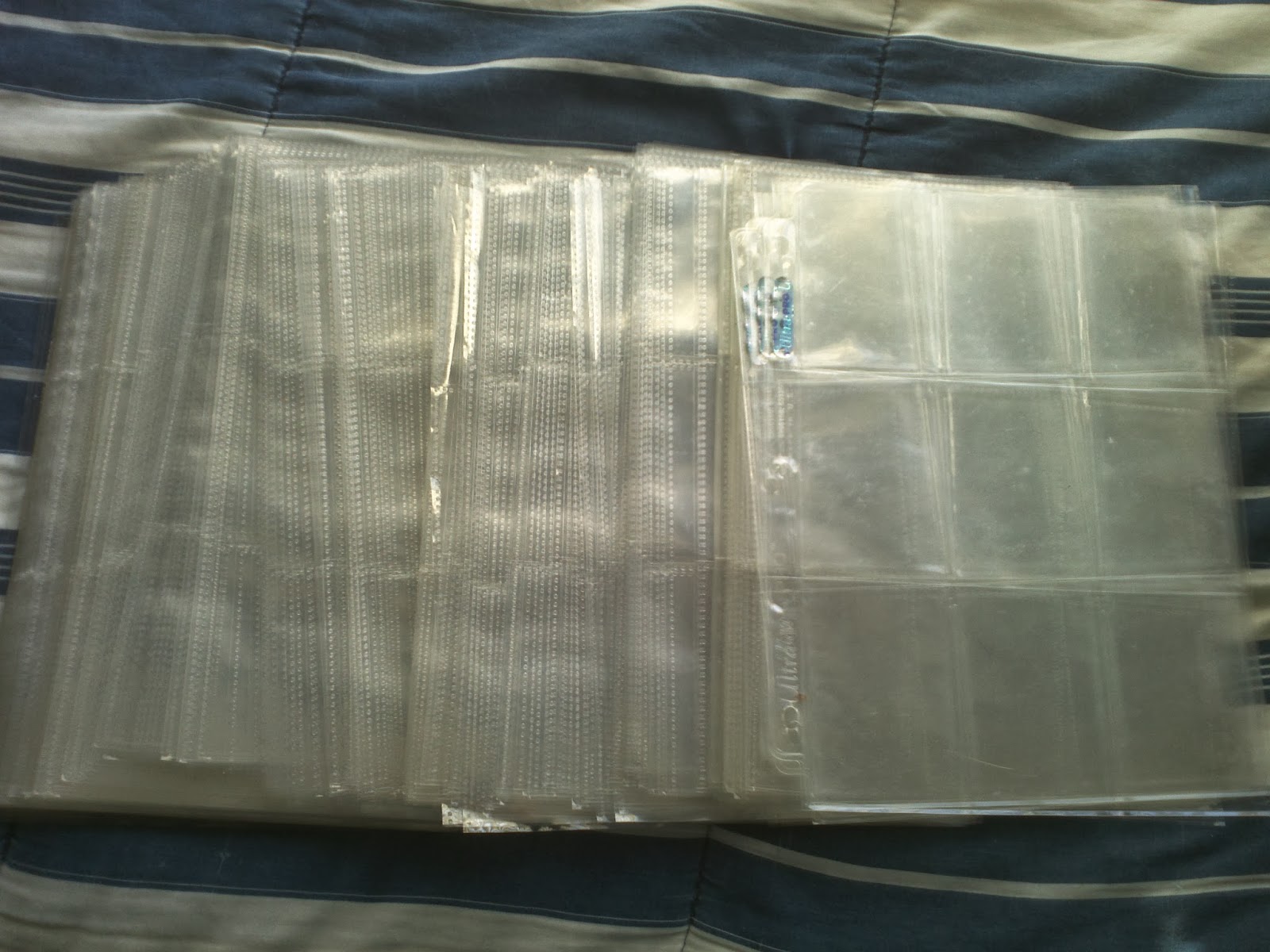 In continuing from Part 1 of today's trade post mini-series, we move on to the second half of T.J.'s masterful flat rate box of fun.

What you'll see tonight are the reasons why he decided to ship a giant flat rate box my way. After all, I'm sure T.J. could've fit all the standard-sized cards I featured earlier today in a regular yellow bubble mailer.

Well, for one thing, the flat rate box came stuffed with at least 100 cherished nine-pocket pages. If you're a binder guy like me, you can never have too many of these things.

Even though I "double bag" (that is, storing cards front and back), I use nine-pocket pages at a blistering pace. I always seem to be on the brink of running out of them.

With the big pile T.J. sent me, it's good to finally have a nice cushion. 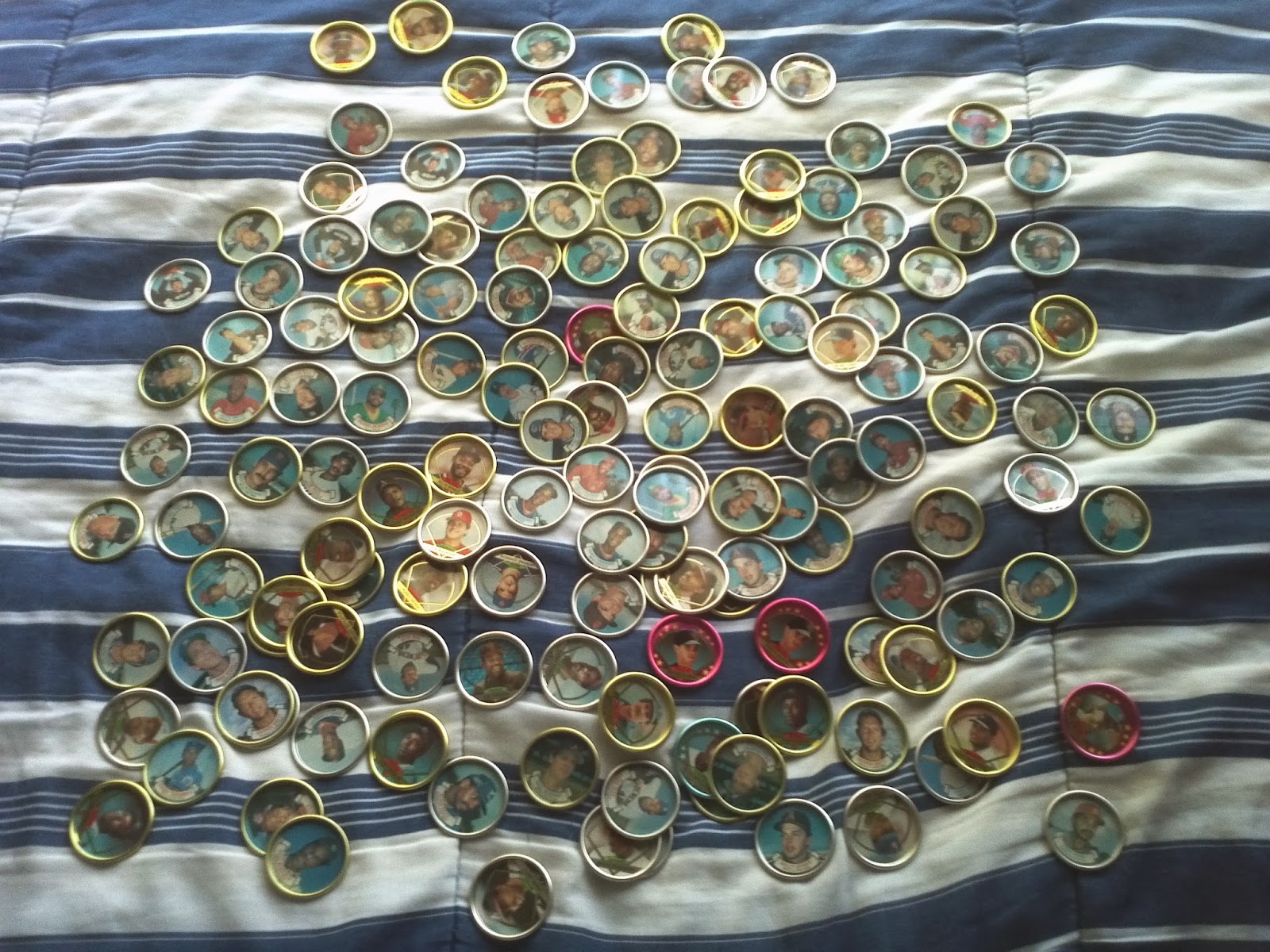 Just the cards and the pages would've been way more than enough.

But T.J. decided to take it another step further.

Upon reaching into the flat rate box, the very first thing I pulled out was a literal sack full of late '80s/early '90s baseball coins. I honestly felt a little like a pirate.

Before T.J. came along, I'd never owned a single one of these things.

Just like that, though, I was in possession of a whole sack of 'em. 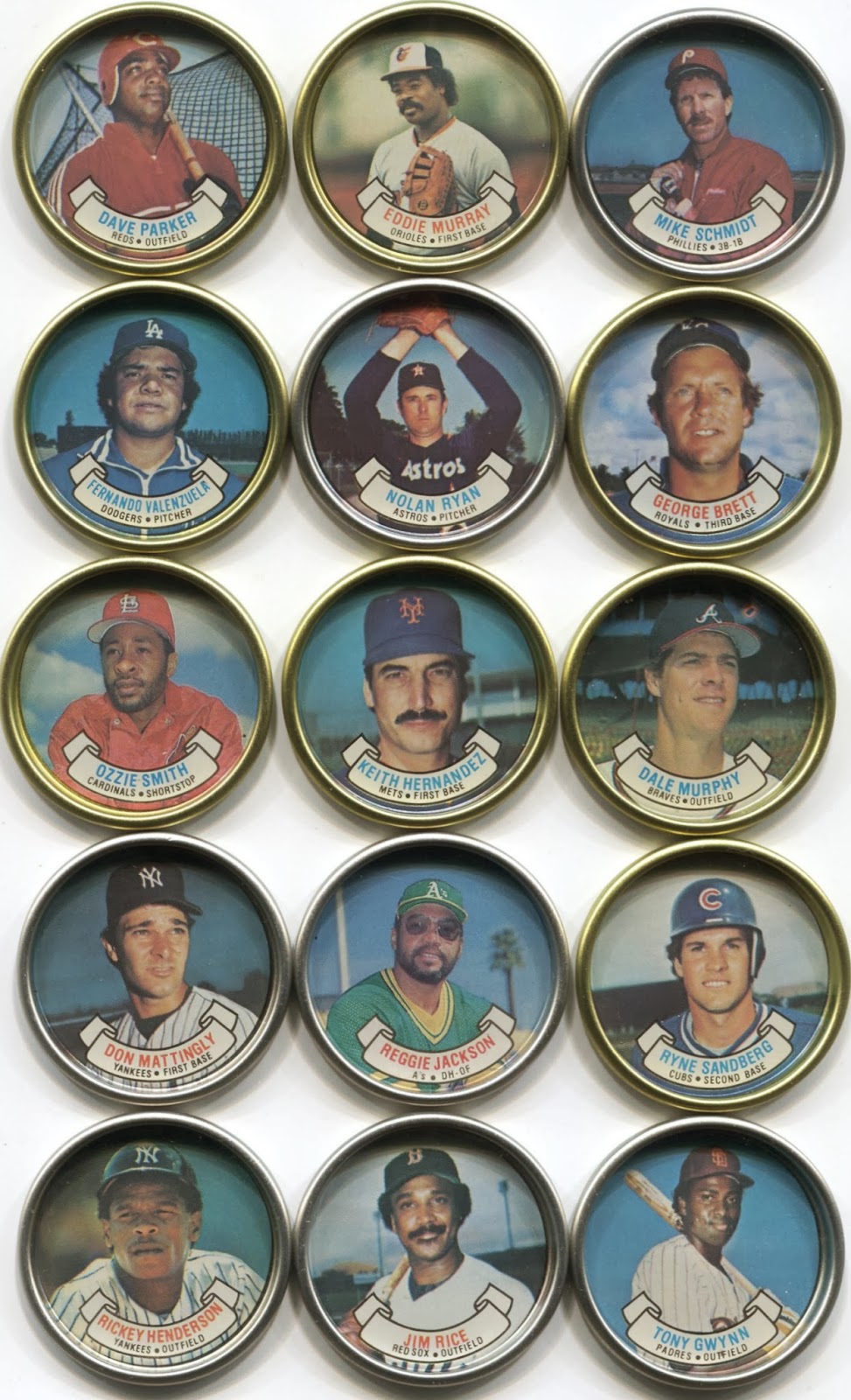 Above are a few of my absolute favorites from the coins.

Between names like Mike Schmidt, Nolan Ryan, and Reggie Jackson, it was certainly a nice mix. 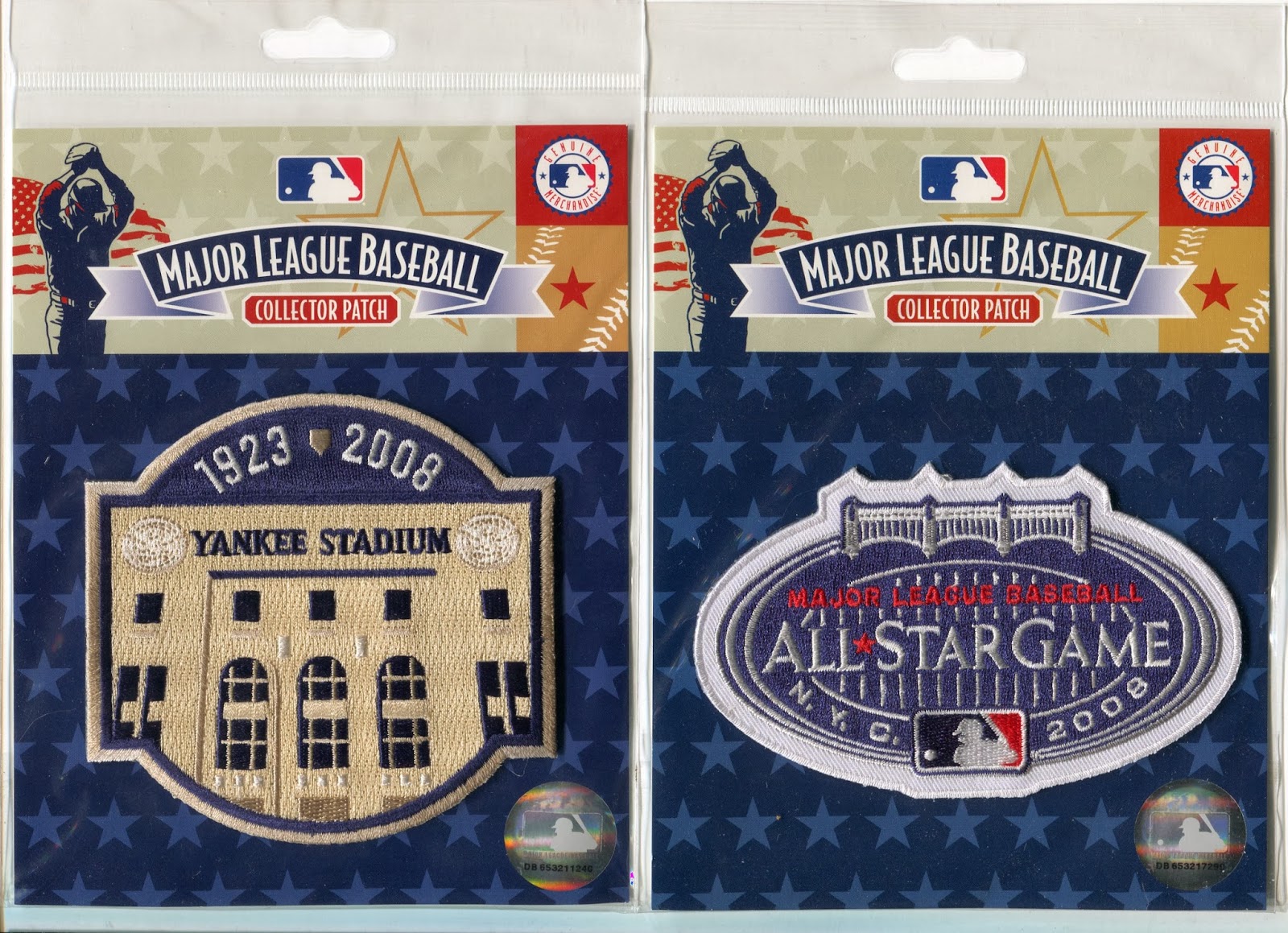 The fun didn't stop there.

Both of these sweet patches commemorate the final year of the old Yankee Stadium in 2008.

If I'm remembering right, I believe these were only issued through retail outlets.

Going through this flat rate box was like seeing one of those old clown cars on TV.

Every time I thought I was finished digging through the spoils, something else fell out.

As I delved further and further into T.J.'s selection, I found the absolute greatest assortment of oversized cards anyone has ever sent me.

Given my binder-loving ways, I feel like I've given off the vibe that I don't like plus-sized cardboard. That's simply not true. Even though I'm still not quite sure how to store them, I'm always up for oversized cards.

Among the goods was this uncut trio from 1990 Baseball Cards Magazine. Way before the likes of Heritage and other retro-themed sets, these beauties featured current players on old time designs. This panel, featuring Jose Canseco, Bo Jackson, and Ruben Sierra, pays homage to 1969 Topps.

I'll admit, I was tempted to chop this thing up in order to place each of these in a nine-pocket page.

In the end, though, I think they're better left uncut. 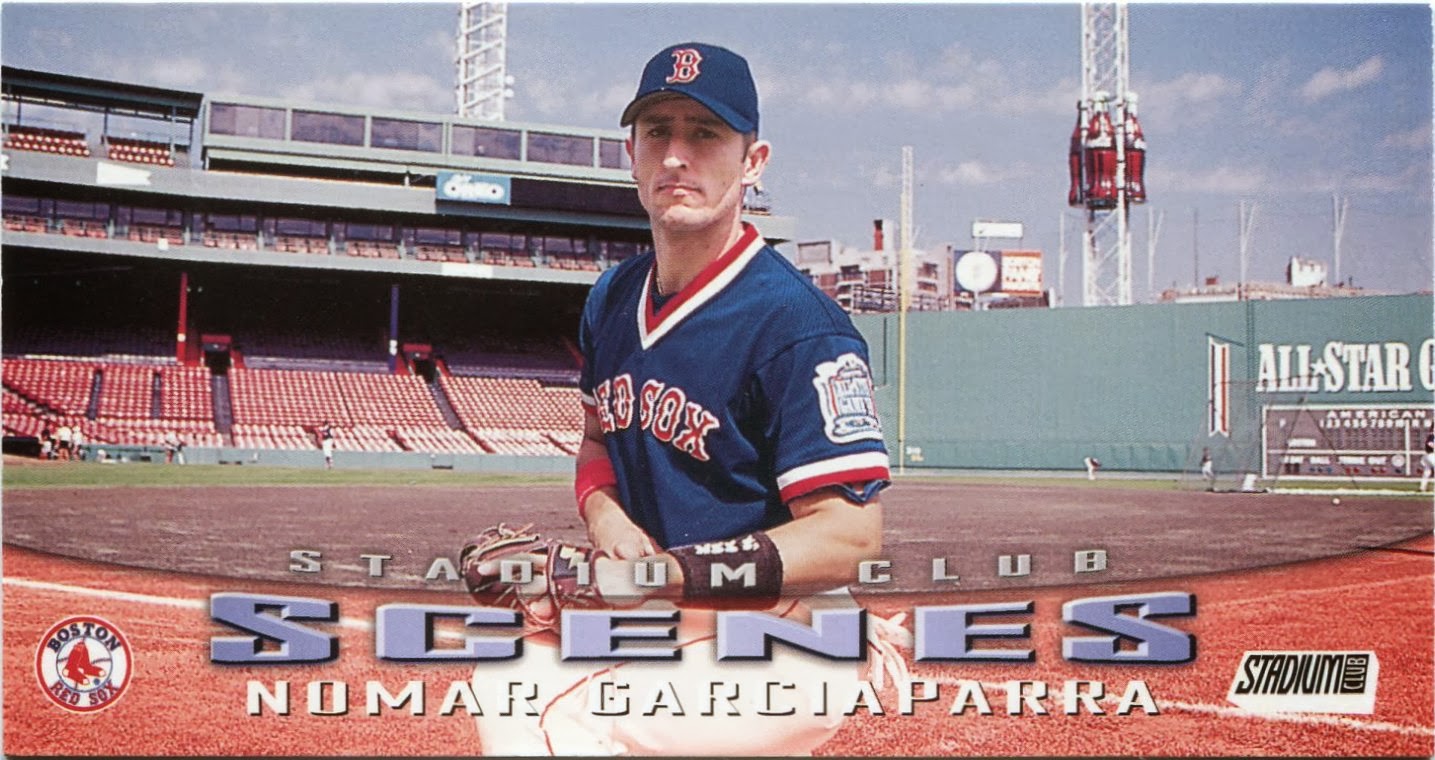 Like a lot of the items T.J. found, this oversized insert was new to me.

In what I'm guessing was a Stadium Club box-topper of some sort, this superb shot of Nomar Garciaparra features an astonishingly beautiful Fenway Park backdrop.

This is the type of thing you just can't get from a standard-sized piece of cardboard. 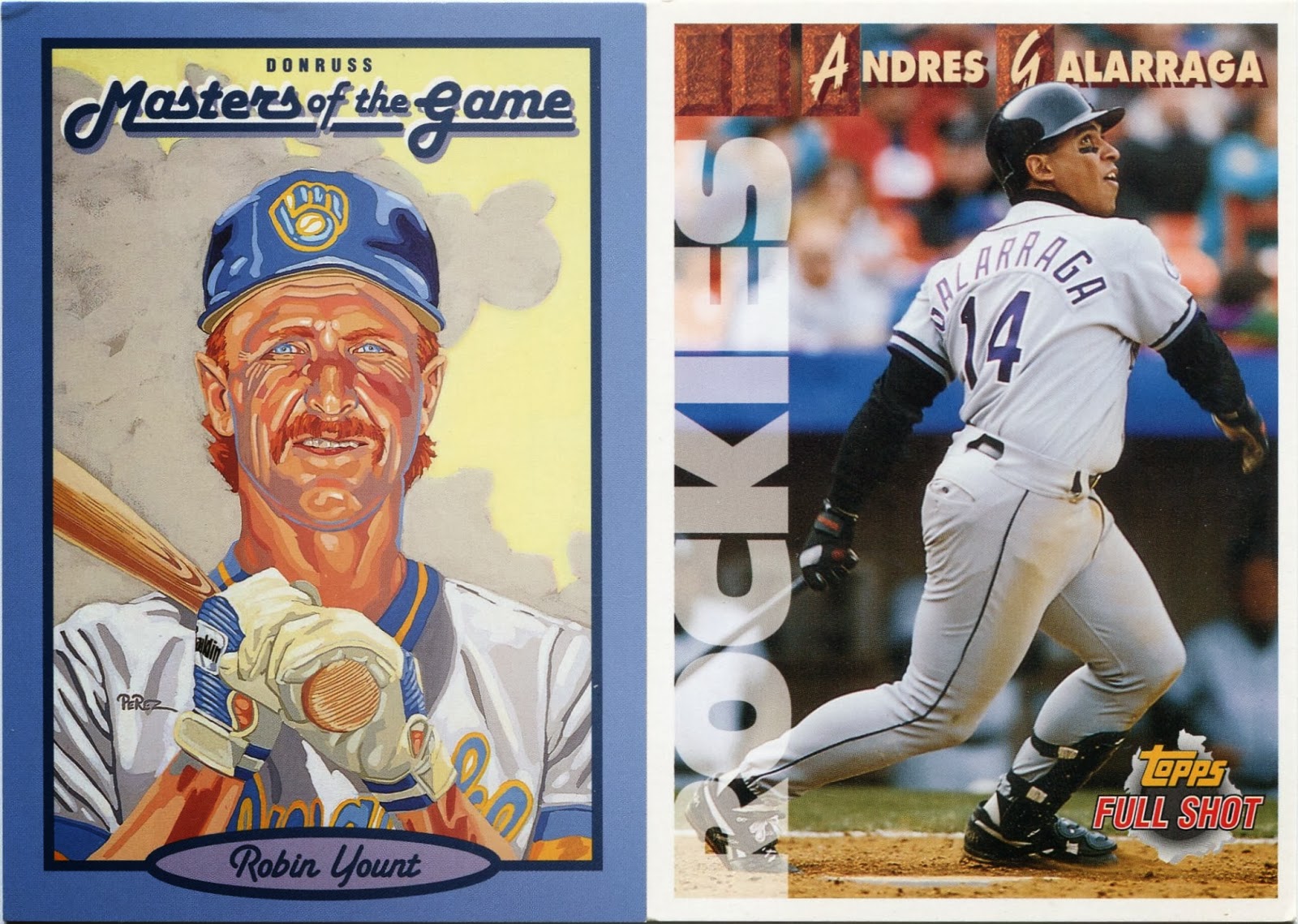 I'm not quite sure how T.J. managed to gather up so many plus-sized pieces, but he certainly gave them a good home with me. 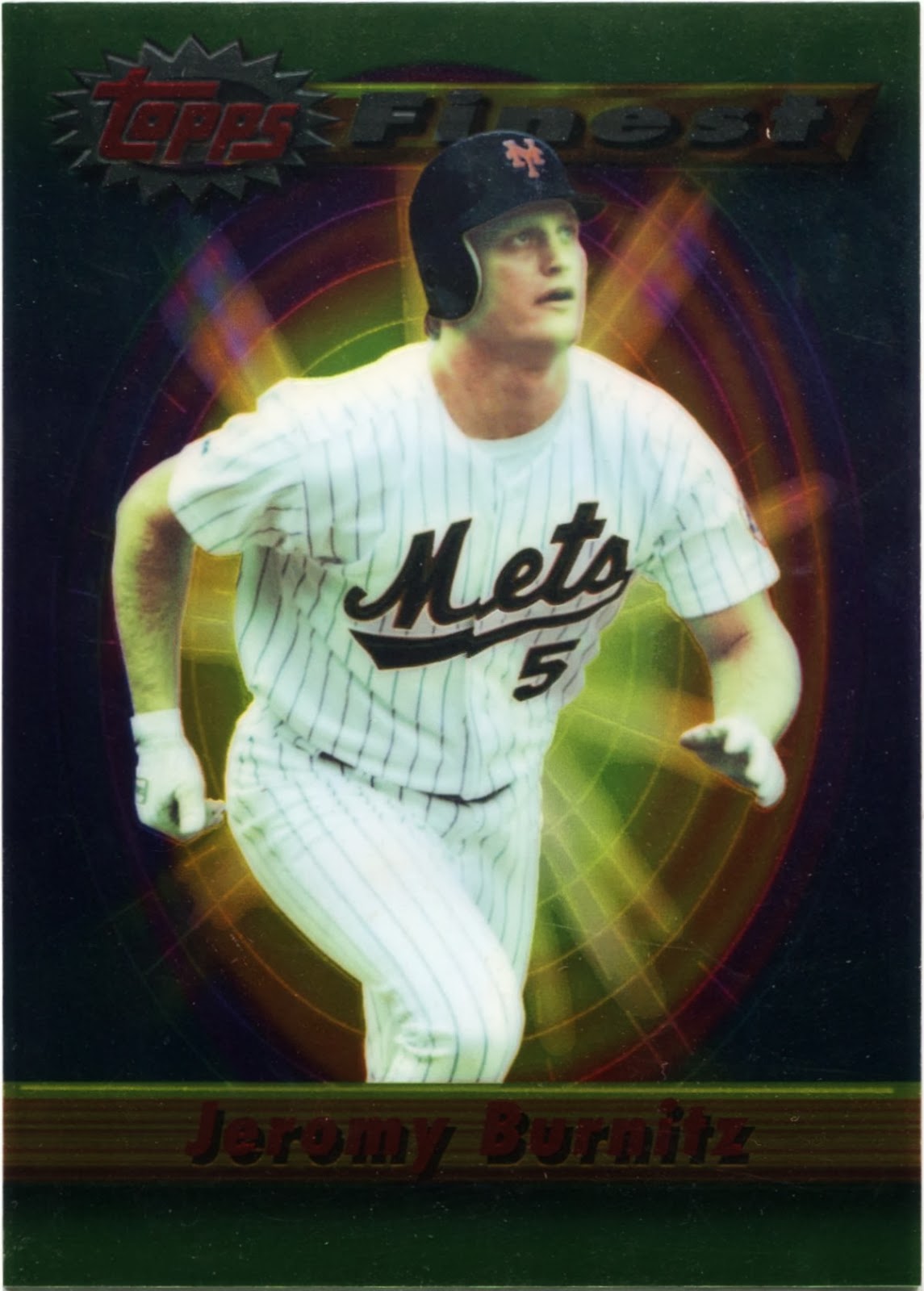 I had no idea Finest even came in oversized form.

The scan of this gigantic Jeromy Burnitz piece doesn't even begin to do it justice. This is now the biggest baseball card in my collection.

To show just how huge this thing is, I scanned it with a normal-sized card. See it there in the top-left corner? It doesn't even reach down to Kenny Lofton's shoulder.

If you haven't guessed by now, this monstrosity comes from the mid '90s.

What other era could've produced such a wacky piece of cardboard? 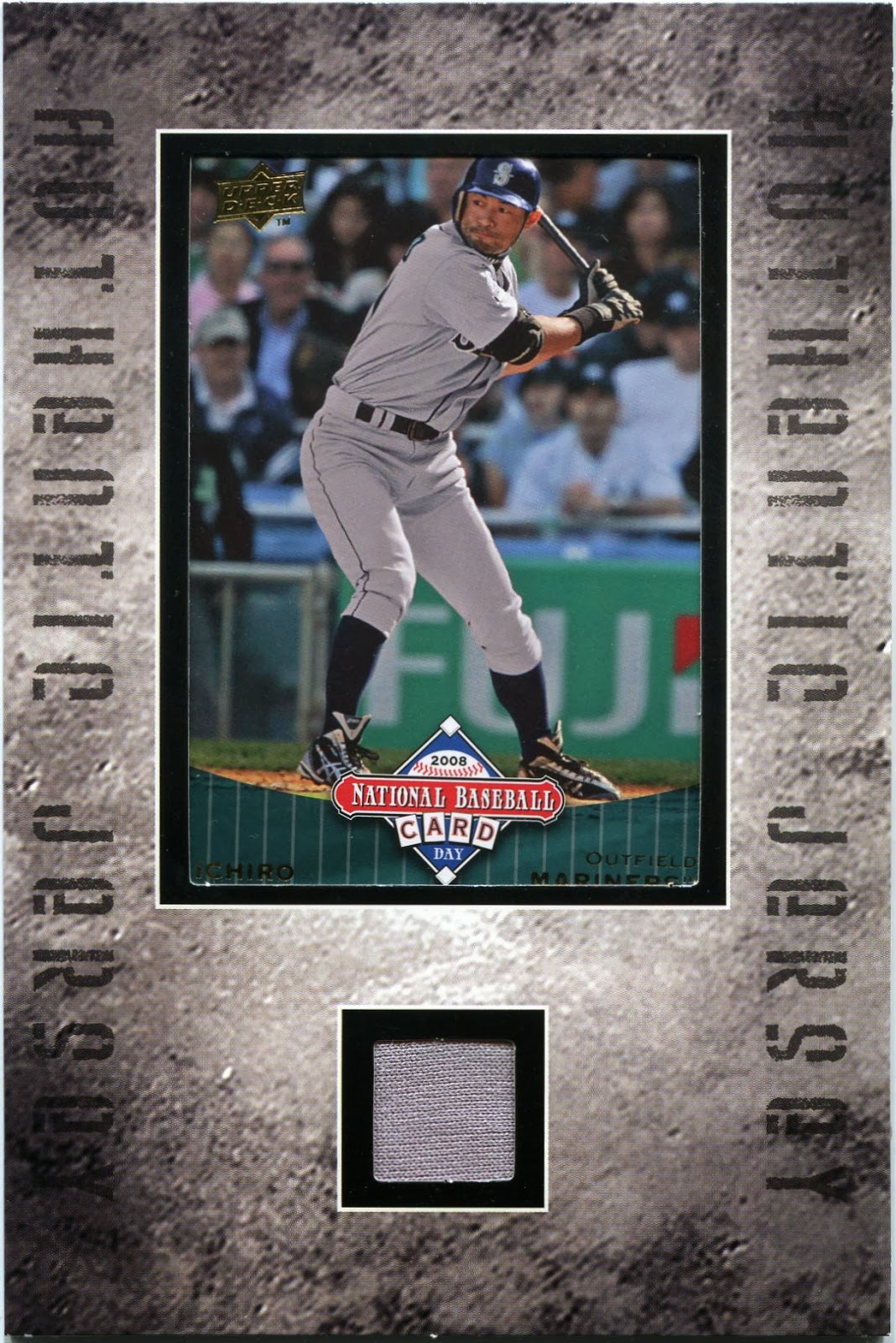 I've seen a few other bloggers pull these from repacks over the last couple years.

I love how the people in charge of these things framed an actual card of Ichiro to go along with the jersey piece. While I've heard others question the authenticity of the swatch, I think it's cool either way.

Whether it's real or not, jersey cards don't get much better than that. 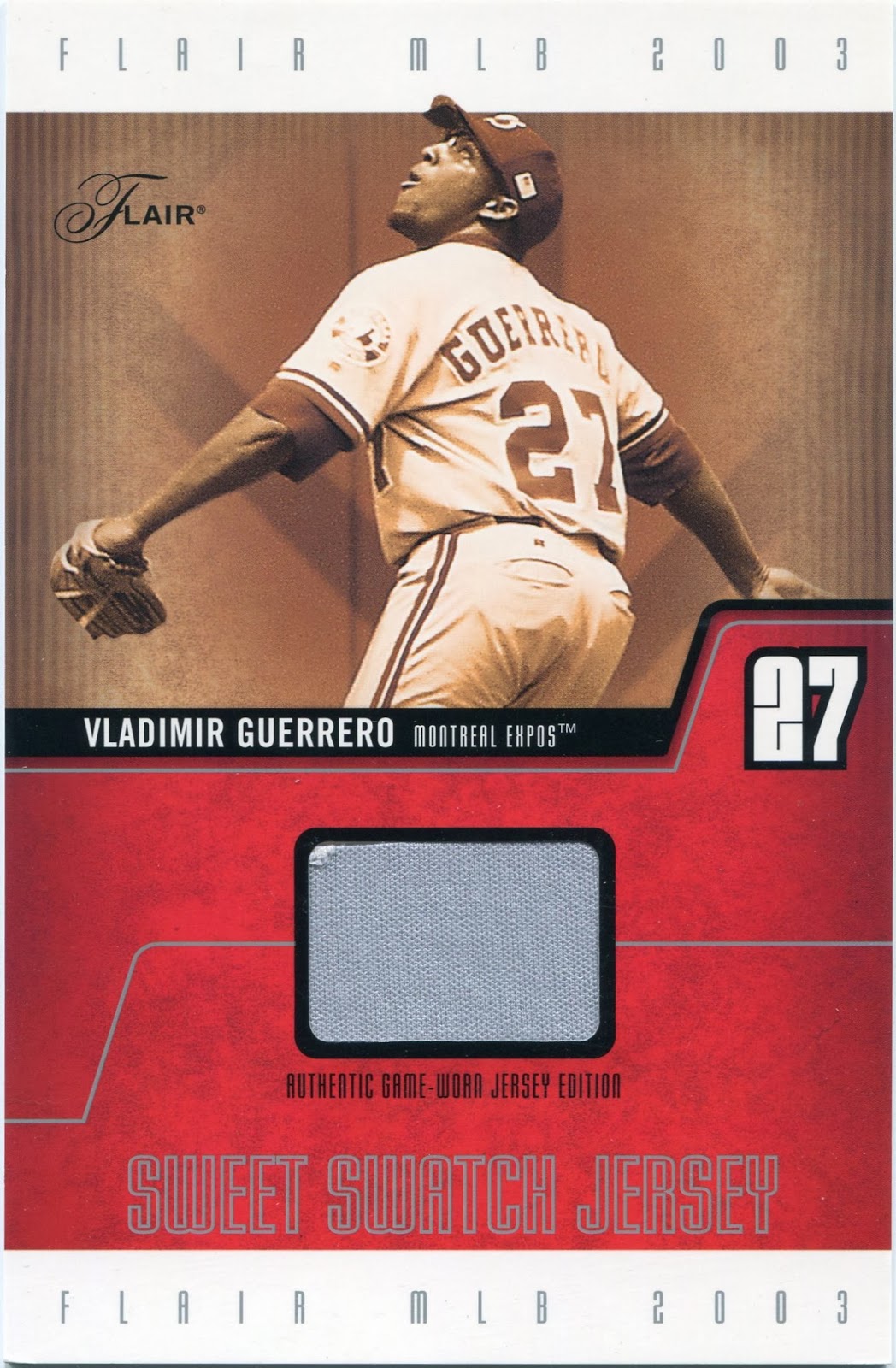 Alongside the Ichiro was this terrific oversized jersey card of "The Impaler" himself, Vladimir Guerrero.

It's definitely the biggest Vlad I own, and certainly one of the most interesting. Numbered to just 50 copies, I'd venture a guess that these were found in boxes of 2003 Flair.

If all jersey cards were as good as this, I might pay attention to them a little more.

So, if you want to be a blogger, I'd say go for it. At some point, you'll meet a few insanely generous people like T.J. that will sweep you off your feet with a trade package like this.

Better yet, you'll get to share your thoughts and feelings about those acts of generosity with your fellow bloggers.

It's the best place in the world for collectors like us.

Well, you've got a few more coins heading your way.

What an awesome box o' fun.
Every collection worth being called a collection has gotta have some coins.

If you don't know what to do with the Nomar /Fenway box topper card. I'm sure I could give it a good home

T.J. must work for Fairfield or something... that package reminds me of last year's AMAZING Collector's Cache boxes.

All that stuff is your problem now! Mwa-ha-ha-ha!

Glad you like everything. There was so much extra space in that box that I felt I should fill with stuff that's been taking up space on my shelves for years. I figured you could appreciate it all or at least knew who else could.

You need to go mow that T.J guy's lawn or something!...haha!....gotta check out all those coins with you soon....