If you're anything like me, part of the fun of collecting involves accumulating.

With that, part of accumulating involves accumulating extras. Even though I know it's not likely that I'll need every card in that pack from Target, I'll still buy it. If I'm lucky, I'll keep the four or five pulls I need and try and trade the others.

That's part of accumulating, after all. Accumulating extras means trying to find a good home for those extras. Now, like almost any other collector out there, I have boxes full of spare cardboard. I've tried to unload as much as possible, but it's a never-ending process.

Part of what I enjoy about trading is digging through my boxes of extras. It's fun to find those few great spares you have and say, "Wow, I bet so-and-so is going to like these more than I ever could."

So when Mark, a Red Sox collector and a new blogosphere reader, contacted me about having some cards to send my way, I was more than happy to find something for him in return.

From what Mark says, it sounds like he has quite an impressive Red Sox collection. He's just starting to dabble into the newer stuff. Luckily for him, I have a whole box full of extra singles from the last five years or so.

Now, when I dig for things to send to others, I'm doing it for them, not me. But if someone offers to drop something on me in return, I won't turn them down.

That's how I managed to turn a bunch of extra Red Sox into the neat John Olerud oddball you see above. 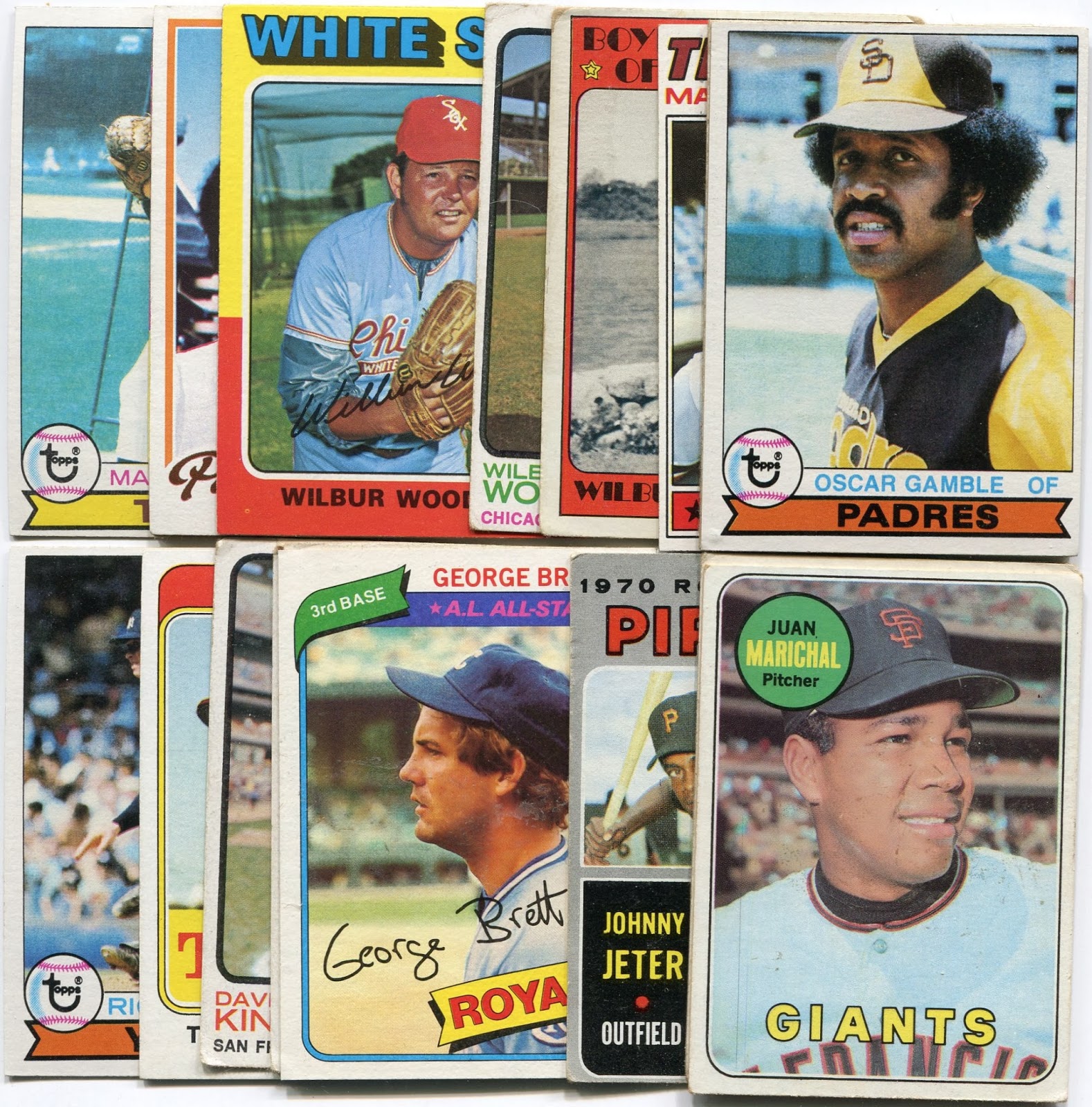 In fact, Mark has dropped a few different vintage-filled packages and PWEs onto me during the last month or so. (And, from what I've been reading around the blogs, I'm not the only one.)

So, in what you could call a "past and present" swap, I scored some awesome oldies for a stack of newer Sawx.

I'll take that deal every time. 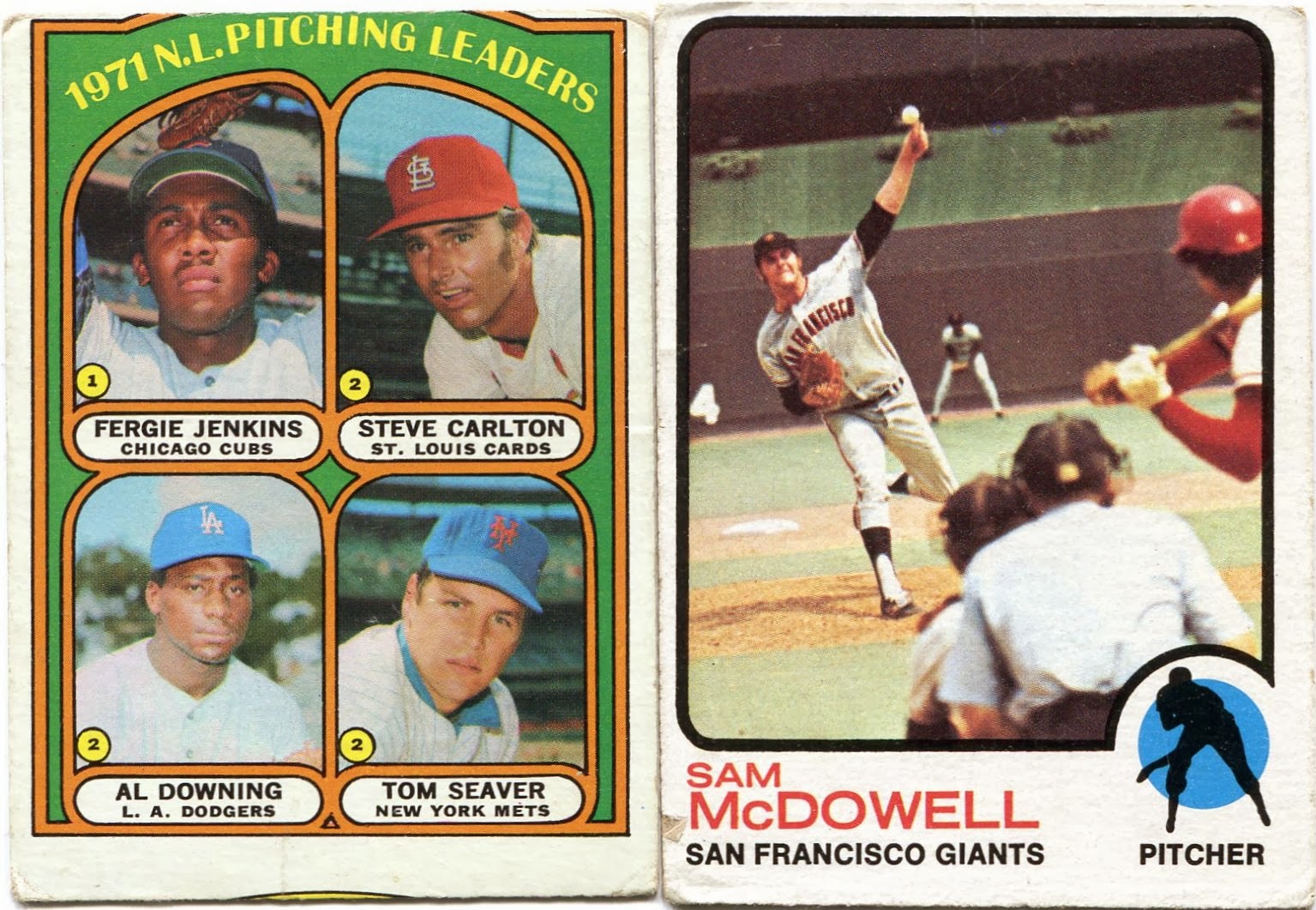 How's this for starters?

I'm sure you'd have a hard time finding a more star-studded "league leaders" card than the one Mark sent along. I spy three Hall of Famers and the guy who gave up a record-breaking homer to a different Hall of Famer on that beauty. (To be fair, Al Downing was a pretty darn good pitcher.)

And, in yet another chapter from the awe-inspiring photography from the '73 Topps checklist, that McDowell is a beautiful action shot, something that wasn't exactly commonplace at the time. It also has that crooked photo thing going.

I don't know why, but I really like the off-kilter frame. 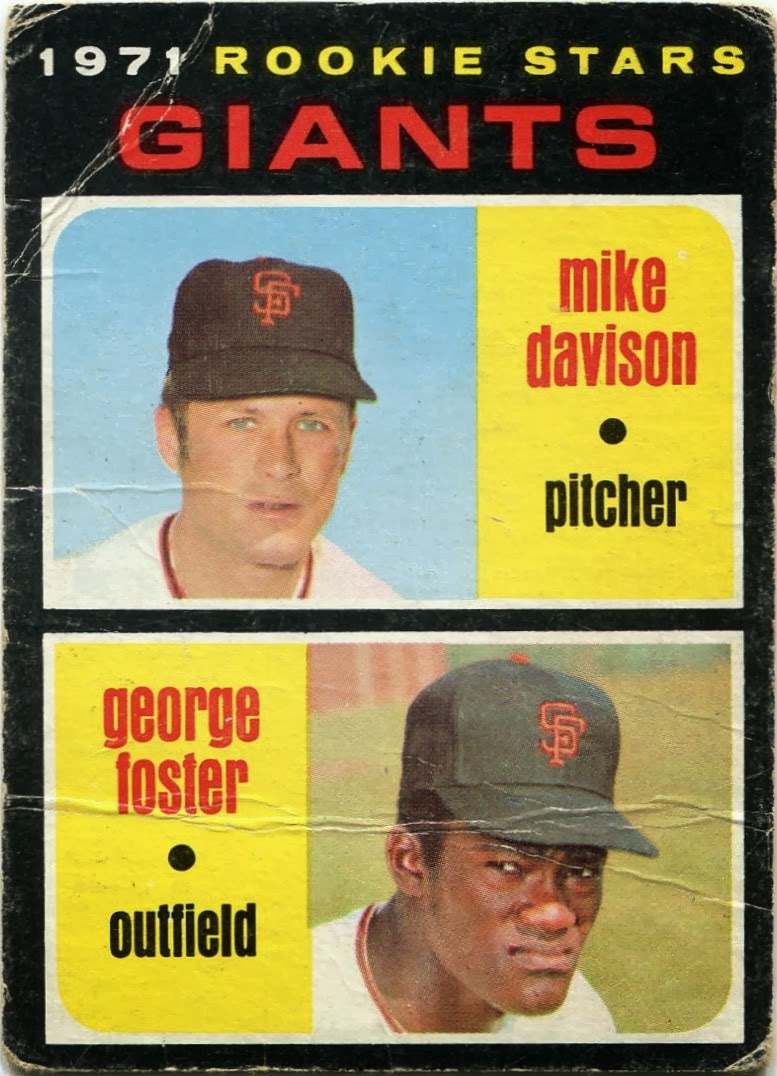 Here's a card I've wanted for as long as I can remember.

Though I'm not usually big on multi-player rookies, this is the only card I've ever seen that pictures George Foster as a Giant. In three different cups of coffee with San Francisco from 1969 to '71, he spent a grand total of 54 games with the franchise.

As many others have pointed out, a lot of Foster's issues feature him with a rather stern look on his face.

That trend can be traced all the way back to his rookie card. 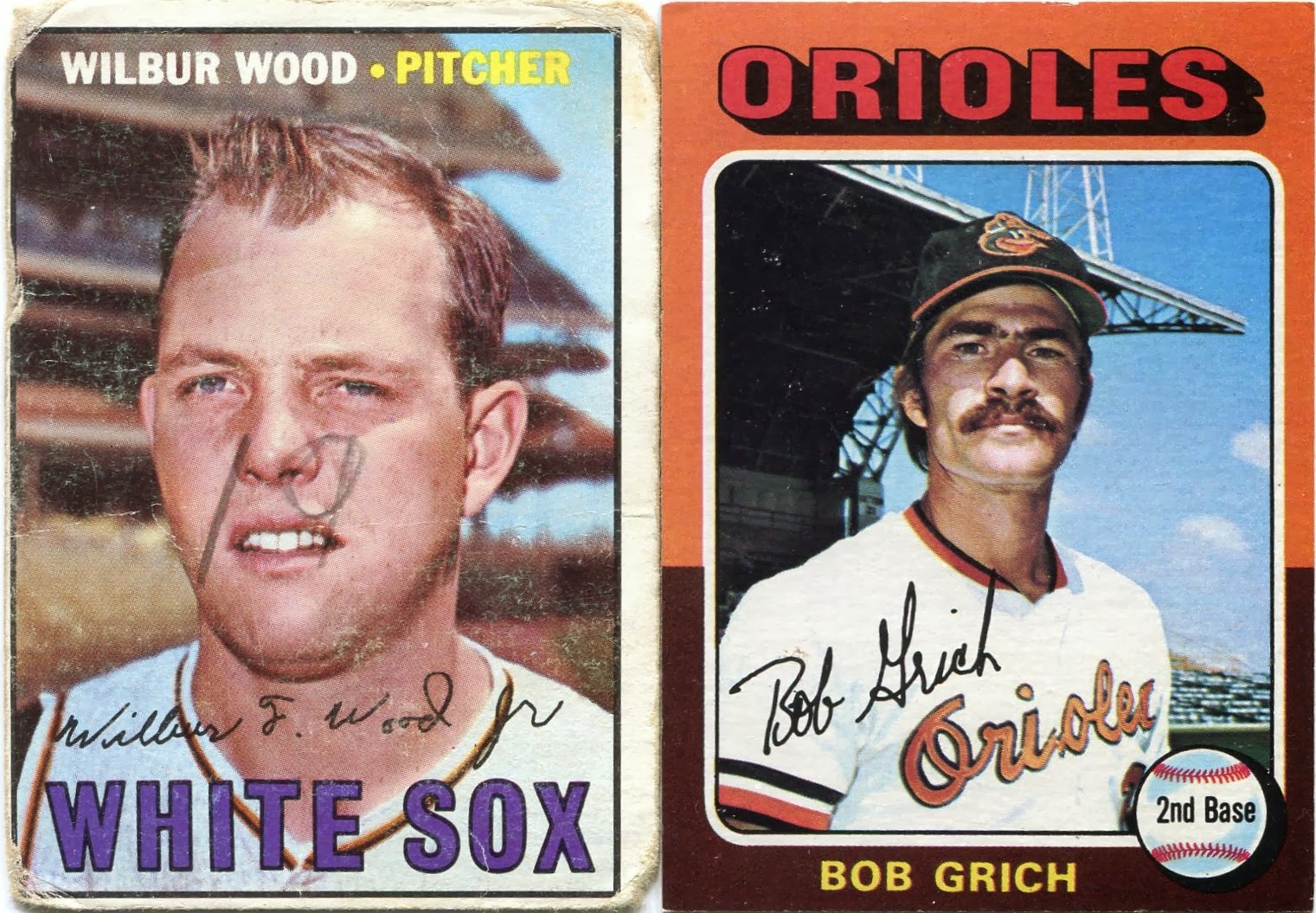 Mark specifically hunted down these two beauties from his extras to send my way.

As I've mentioned time and time again, I'm a big Wilbur Wood fan. Though he's obviously wearing a Pirates uniform in that shot, Wood's 1967 Topps issue marked the beginning of what would be a memorable tenure with the White Sox.

With the writing, creasing, and rounded corners, Mark wondered if I'd still even want the card. Of course I would! It's a Wilbur Wood that I didn't already have. That's way more important to me than the condition.

On top of that, Mark also completed my Bobby Grich "Topps set" with that '75 issue. From his '71 rookie to his '87 finale, I now have every Flagship card of the mustachioed infielder.

I guess Mark took notice of my Bobby Grich fandom... 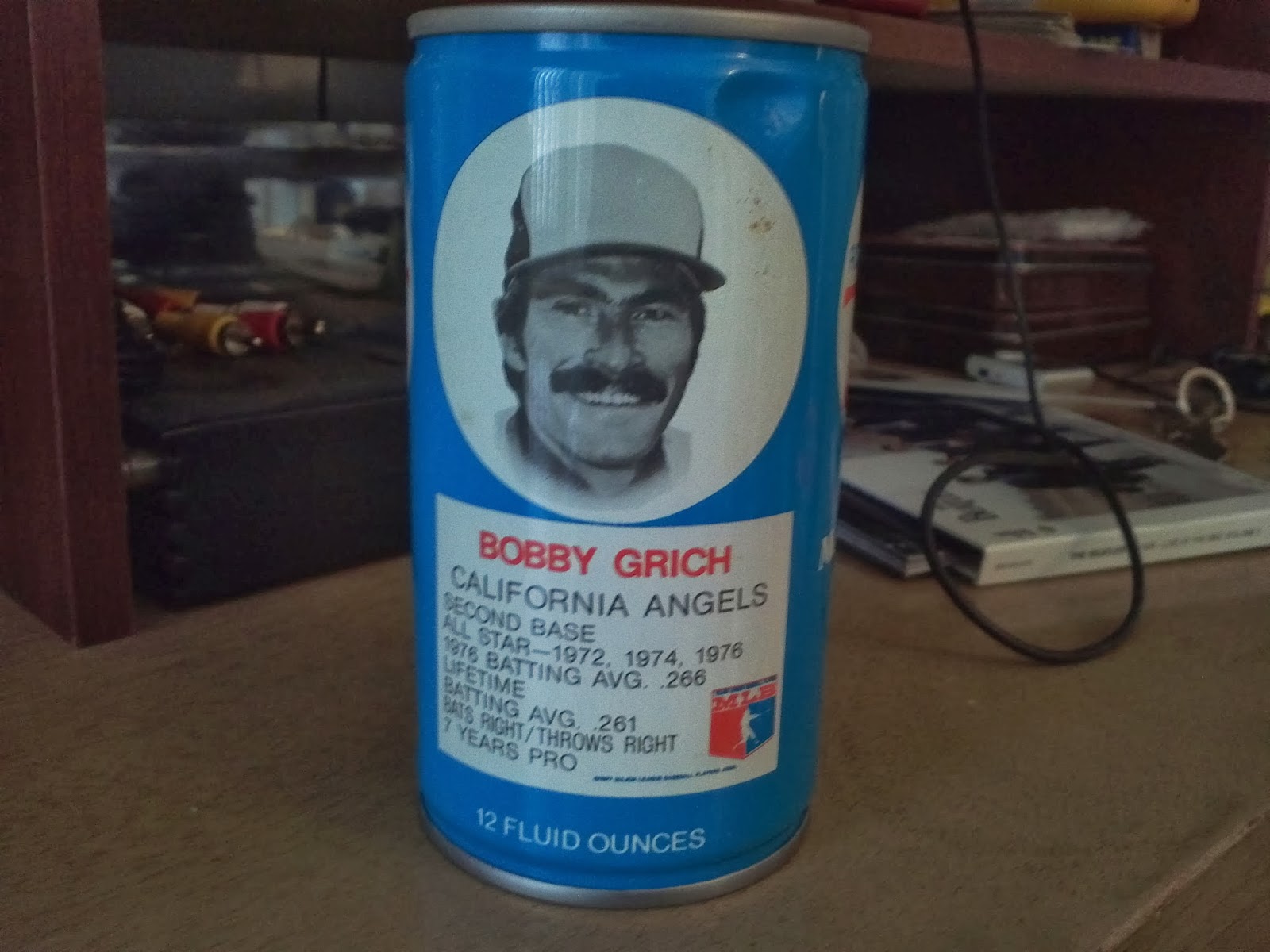 ...because I found this in one of the packages he sent my way.

I picked up a few of these at my local flea market a few years ago. At a buck a pop, they were simply too cool to ignore. The ones I have are Dave Concepcion, Rusty Staub, Mark Fidrych, Al Oliver, and Steve Garvey.

I'm proud to add Bobby Grich to the RC ranks.

Although I wasn't around at the time, this can smells a bit like what I imagine the 1970's smelled like. 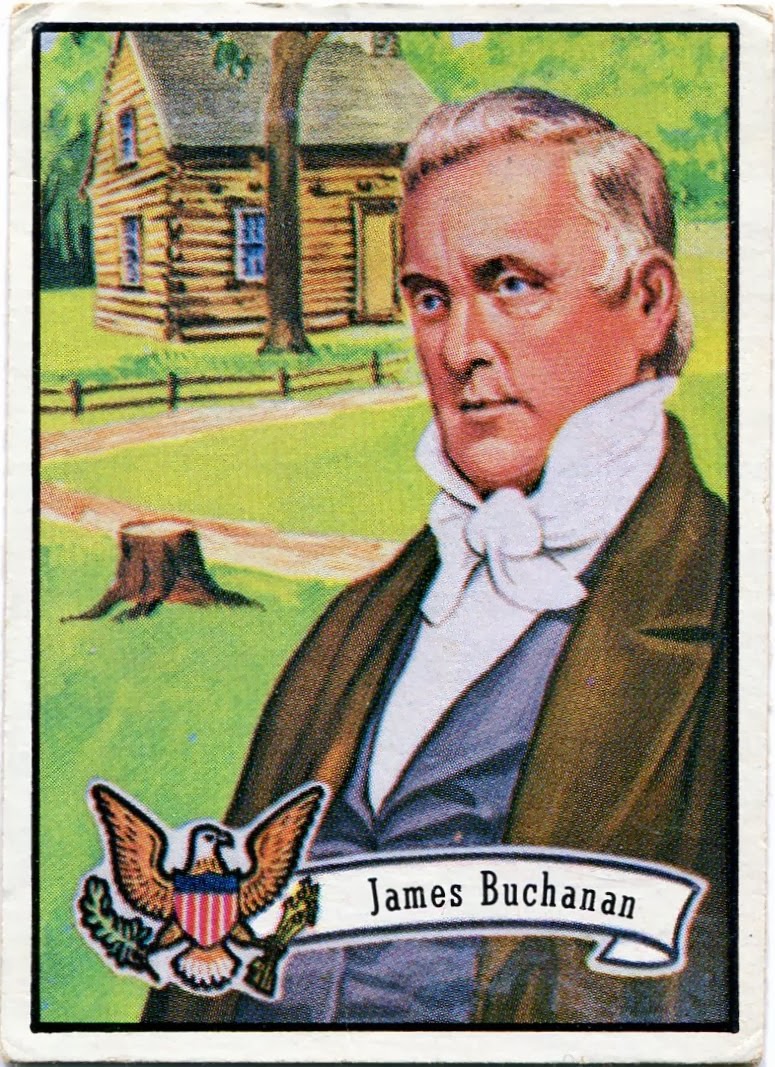 If that RC can was any indication, Mark hit a home run on the oddball front.

I made a quick quip about my presidents collection in a past post. I guess Mark remembered that, because this neat piece of the rather inauspicious James Buchanan fell out of the same package that featured the Grich can.

I'm not sure how, but I'd never known about these until Mark sent this one along. Topps actually issued these beauties back in 1972 to capitalize on that year's election.

It looks like I have a new batch of cards to chase for my presidents collection. 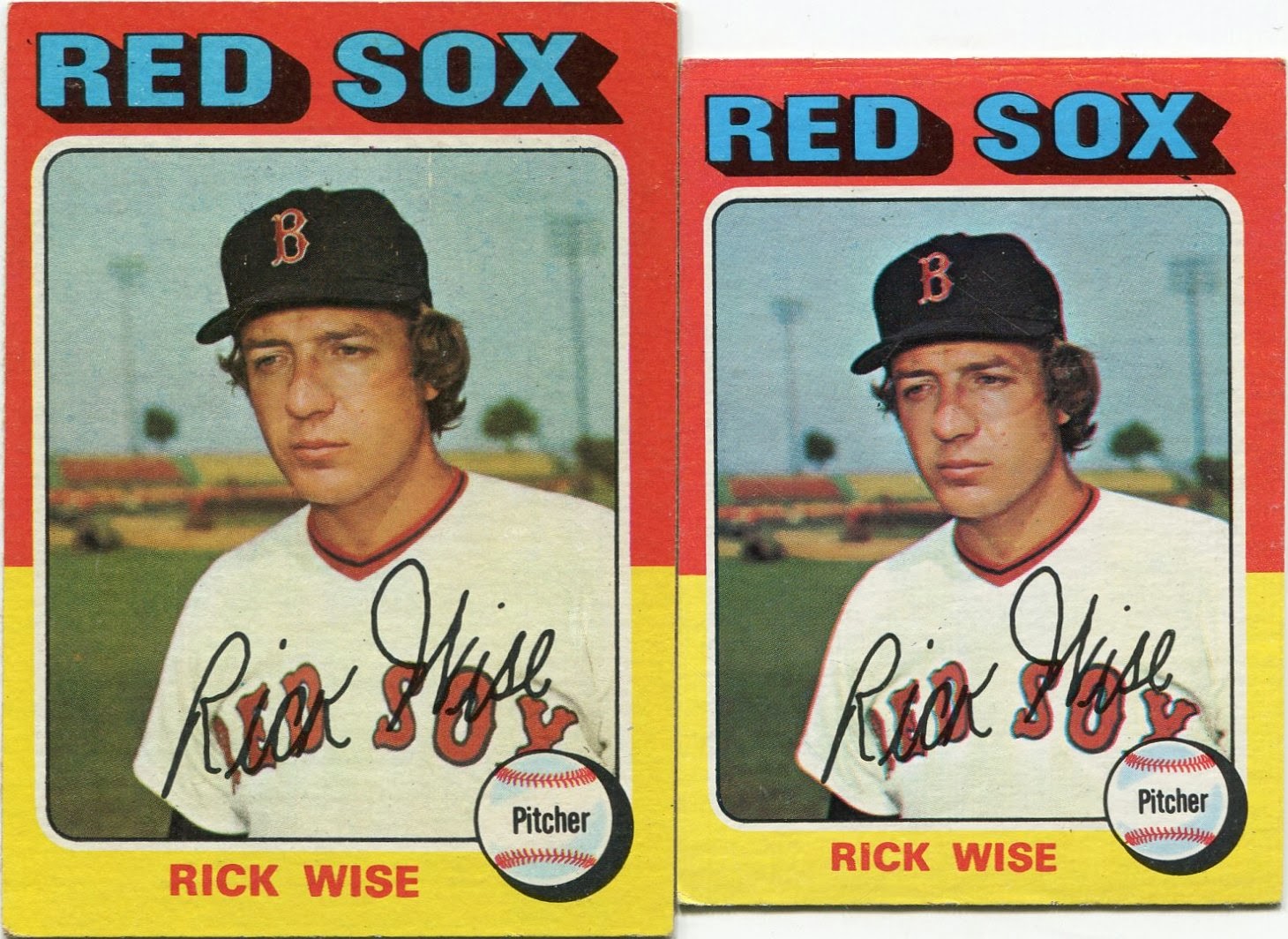 When talking about vintage oddballs, one of the first things that comes to my mind are '75 minis.

Well, as it happens, Mark threw in some of those as well. This one of the rather solemn Rick Wise was my far-and-away favorite. I even scanned it next to his standard-sized '75 to prove its diminutive size. You know, in case you thought I was lying.

One of my favorite pieces of baseball trivia is the fact that Wise once hit two homers and threw a no-hitter in the same game.

I'm convinced that little nugget is going to win me a bar bet one day. 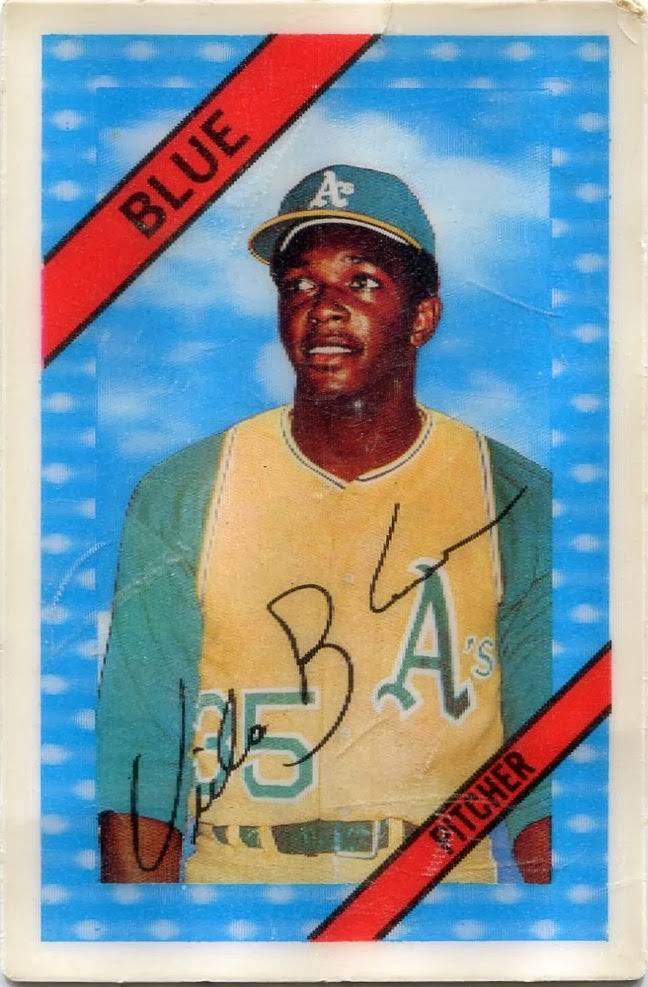 Another big part of the '70s oddball mania came from the Kellogg's company.

I'm sure these were big among anyone who grew up collecting cards during the decade. My dad remembers digging through cereal boxes in search for that sacred piece of 3-D heaven.

Because he seemed to be so well-versed in '70s cardboard, I asked Mark if he happened to have any spare Kellogg's available. Long story short, he did.

The first package he sent me spawned this spectacular '72 Kellogg's Vida Blue. The A's ace was fresh off his Cy Young and MVP '71 season at the time.

It's tough to top that piece of oddball history. 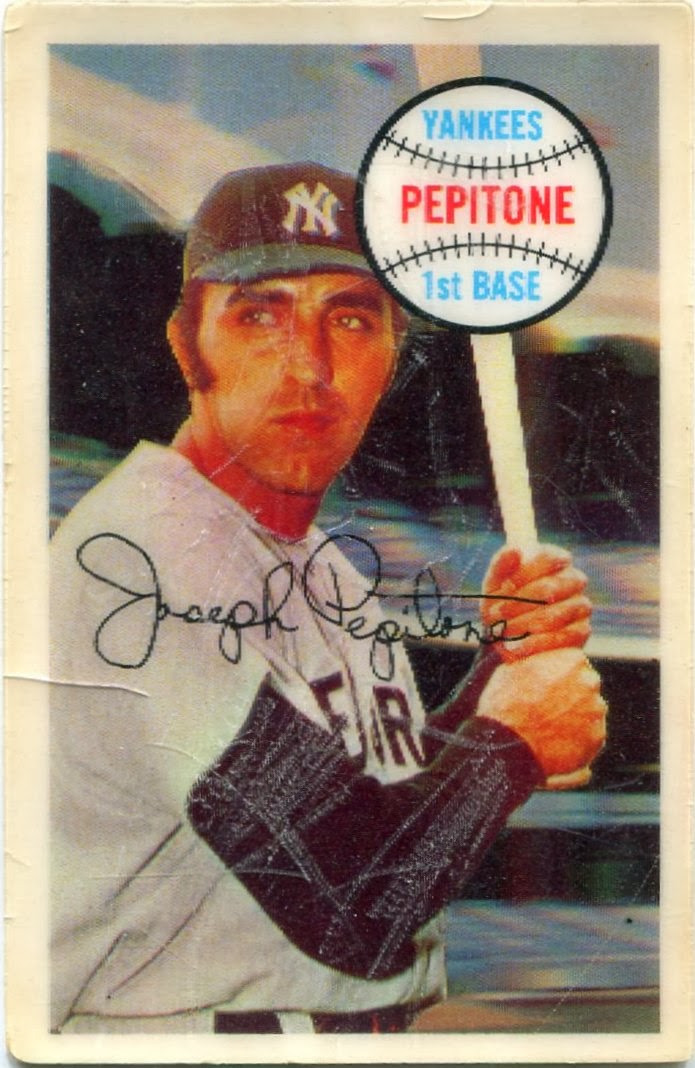 Mark may have very well done just that, though.

This amazing Joe Pepitone comes from the inaugural Kellogg's release in 1970. The former first baseman would actually spend the '70 season with both the Astros and Cubs, but he's featured in his familiar Yankee uniform here.

For all intensive purposes, this was probably Pepitone's last card with the Bronx Bombers. And I'll tell you, it looks a thousand times better than the scan might suggest.

All Kellogg's cards do.

I guess having extras strewn around my room isn't such a bad thing. I'm always glad to find good homes for my spares.

Besides, with great people like Mark around, maybe you'll be able to turn your extras into vintage gold.
Posted by Nick at 5:46 PM

I got some great stuff from "Harry" Mark too (posts to come). Nice and amazingly generous guy.

Very pleased everything found a happy home. Have another pile started to send your way..
E. I might have another McDowell to send to you.

Nice cards (and can), great mix of vintage too. Please Nick reach out to mark for me, I'd love to add a Red Sox trader.

Yeah, Mark is pretty awesome. I forgot how much I love that Foster card, I need to leaf through some of my vintage pages sometime.