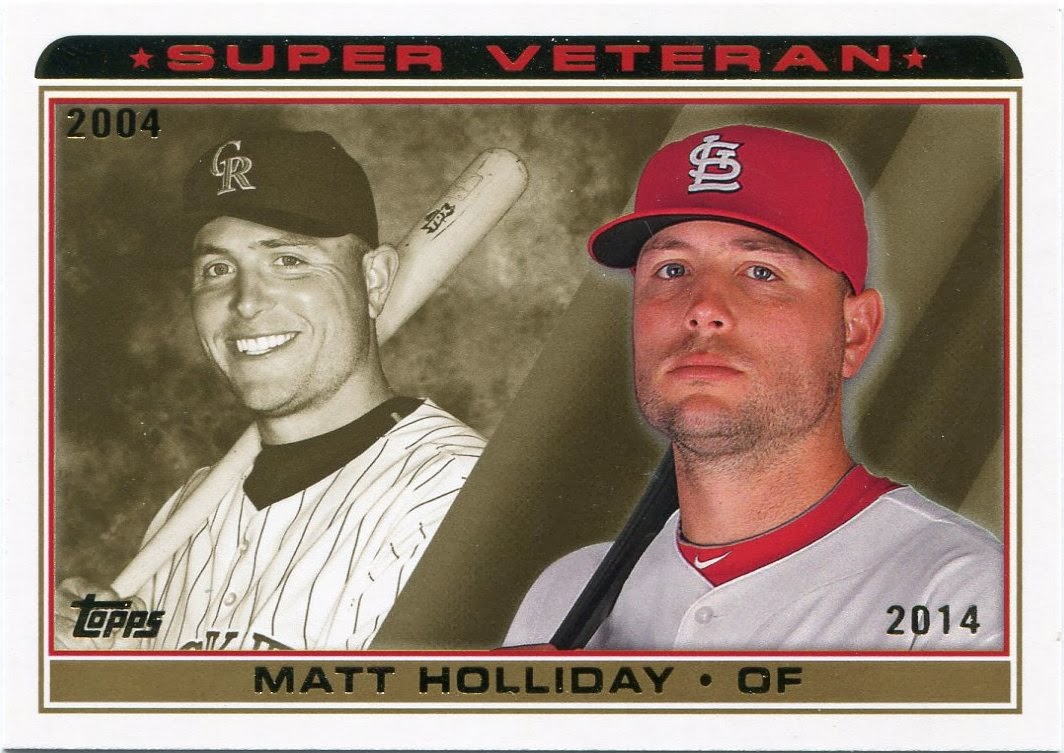 Yesterday, I previewed the awesome birthday gift my dad got me this year.

Now, it's time to dive head-first into this thing.

Though he did put together an amazing assortment of hand-picked cardboard (which you'll see in a bit), my dad knows how much I love to bust packs. Because of that, he picked up a few packs of 2014 Topps for me.

My dad found a few new retail items I'd never seen before. He picked up two little hanger packs, each containing four unopened packs and a bonus "Power Players" insert with one of those codes that few collectors actually care about.

At this point, I don't need many of the 2014 Topps base cards anymore. But, hey, it's always fun to bust a pack of something, no matter what. Plus, I'm still on the hunt for a lot of the inserts.

These packs provided a good deal of help in that department.

This "Super Veteran" Matt Holliday is another step towards my goal of completing this 15-card insert series.

They're probably my favorite new Topps innovation of the year thus far. 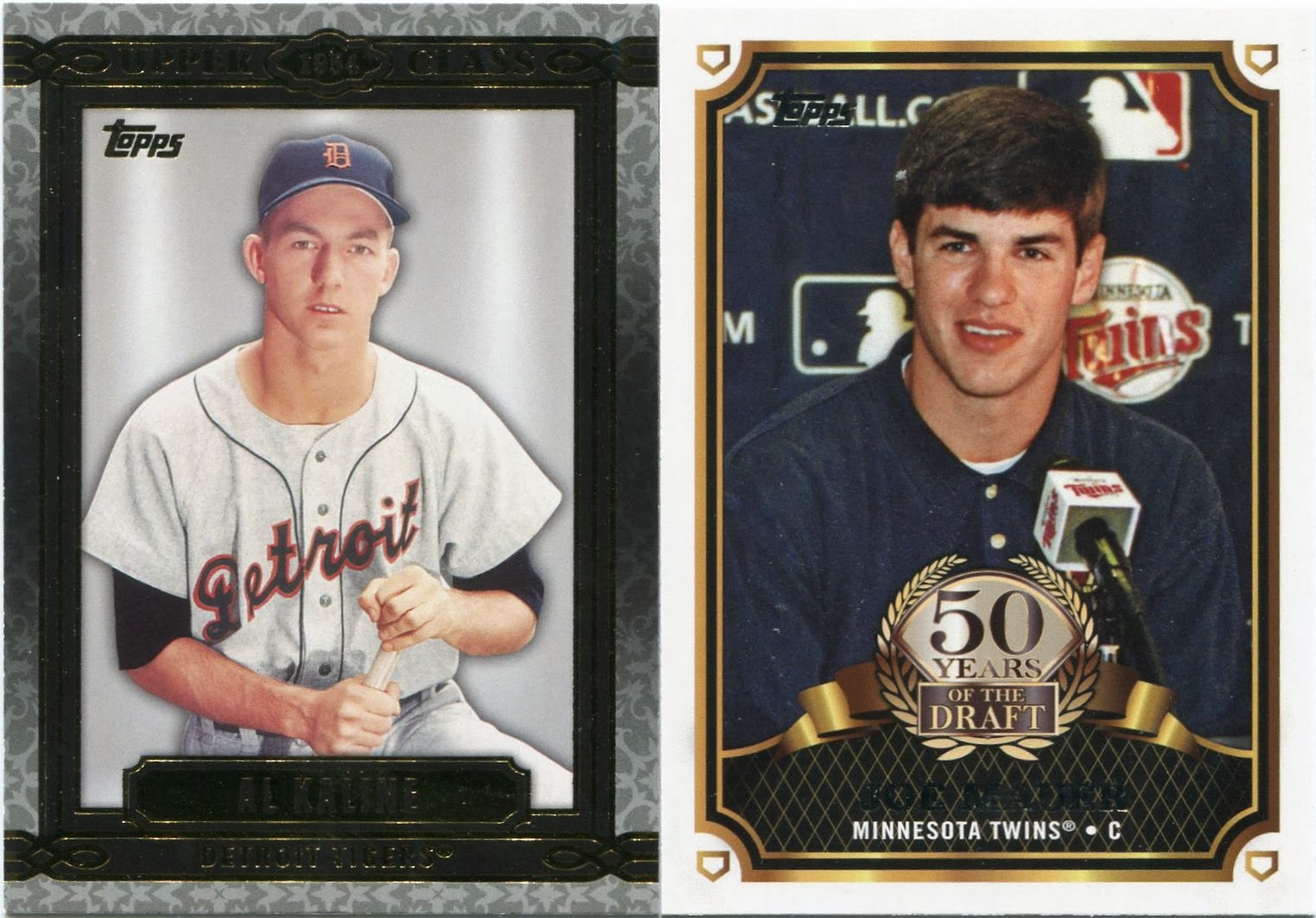 He looks like he's about ten years old in that photo. 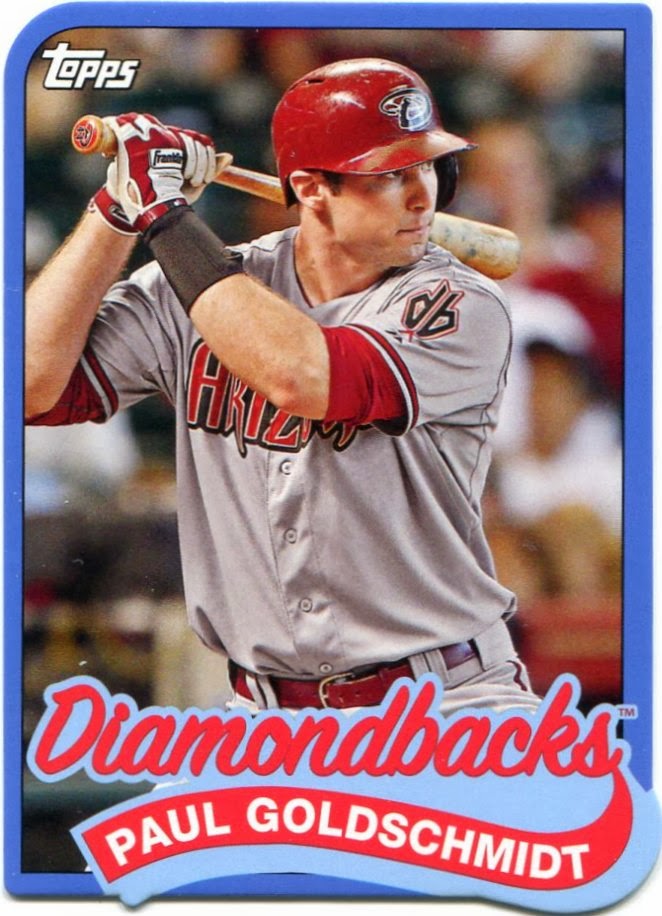 I commend Topps for fitting the rather long "Diamondbacks" team name into this card's rather small frame.

That's about all I have to say about these packs right now.

It's not that they were bad, by any means. 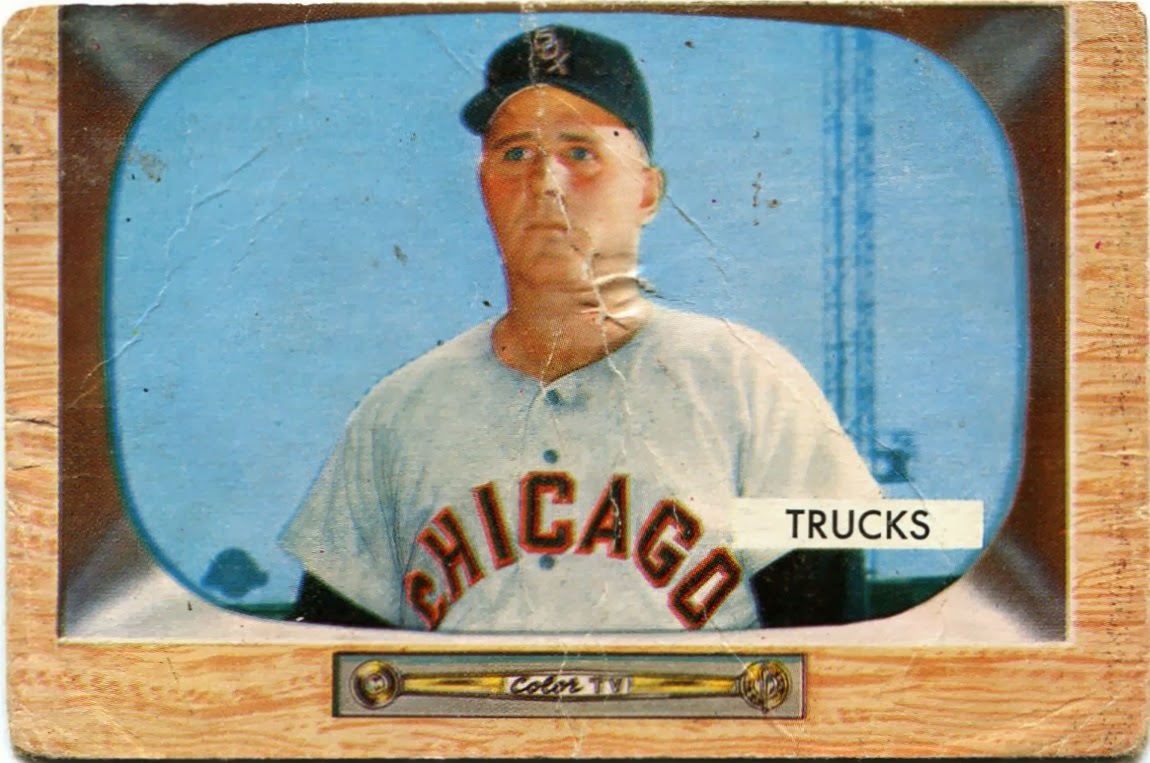 It's just that the other cardboard my dad got me completely blew them out of the water.

Just like he's done with Christmas the past few years, pops went on a little COMC rampage in putting together this year's birthday goods.

The very first card staring up at me from my dad's gift was the Virgil Trucks you see above. Though I've become an even bigger fan of the late pitcher and all-around great human being after joining the blogosphere, I've been collecting him for a while now.

This is yet another absolute beauty from '55 Bowman, a set which would probably rank among my top five ever. 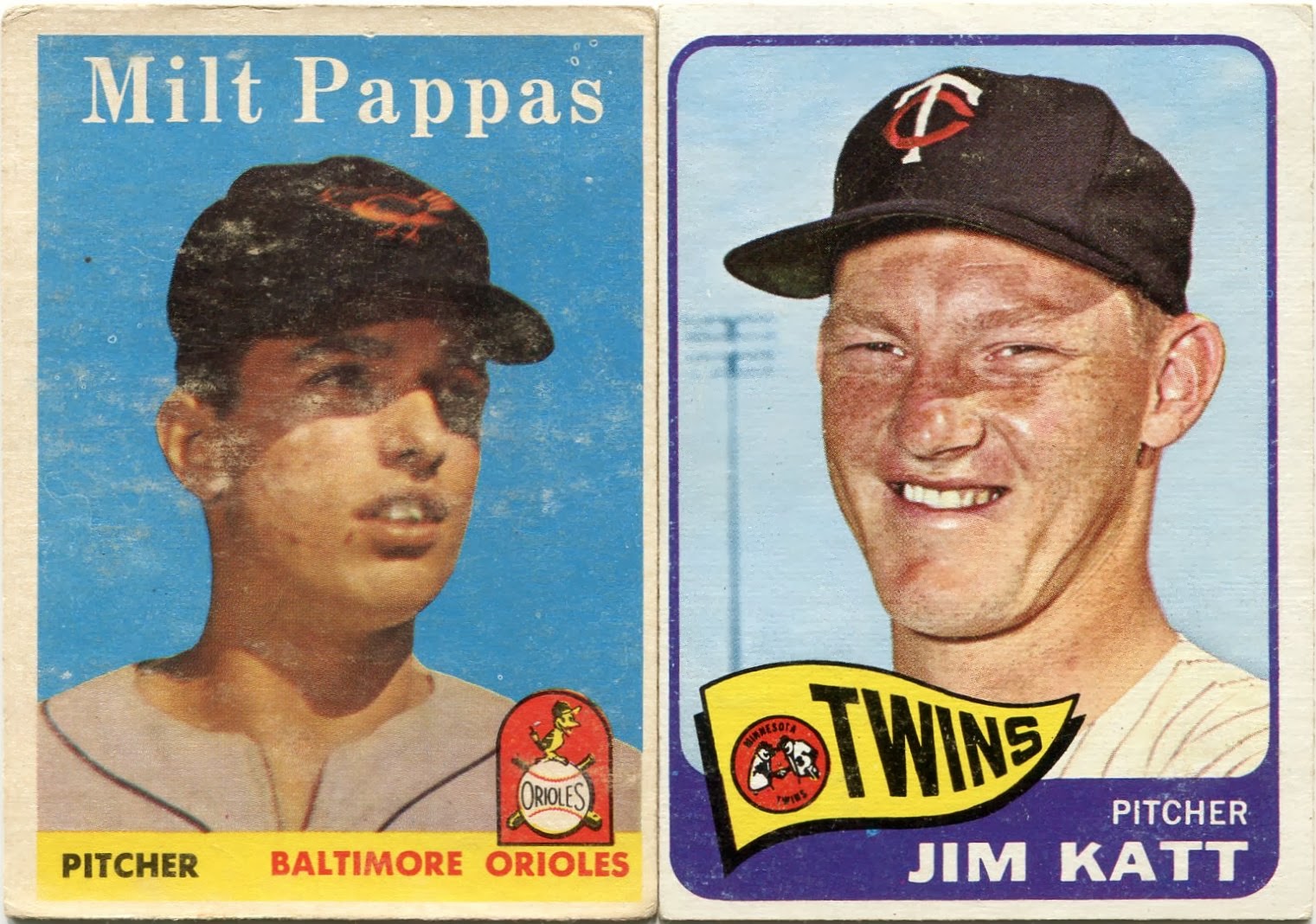 My dad knows that I collect Milt Pappas.

That said, I'm not sure he knew just how much I'd wanted his '58 Topps rookie until he saw my reaction to it last afternoon. A lot of early Pappas cards have fallen into my lap over the years, but never his rookie.

It's awesome to finally have a copy in my collection. I don't think I own many older rookie cards, now that I think of it.

At first, I thought I'd already had the '65 Jim Kaat my dad bought me. (Note the misspelled last name on it.)

That is, until my dad advised me to flip it over. That's when I saw the words "Printed in Canada" on the back.

It's now the oldest OPC in my collection. 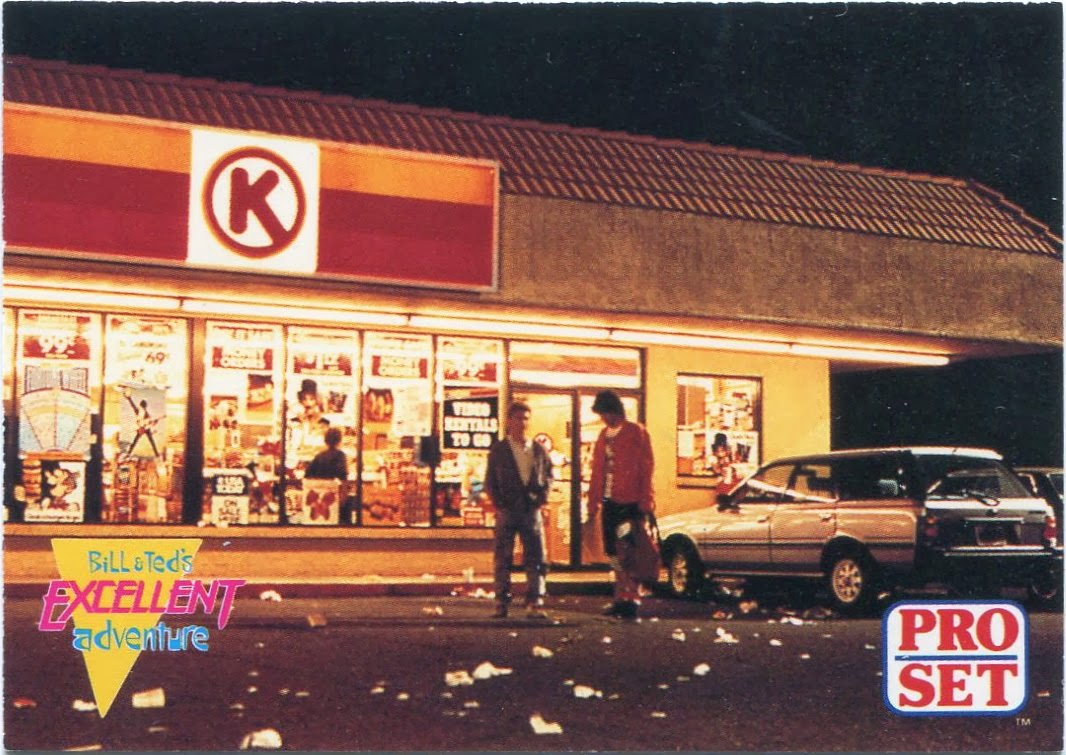 And now for something completely different, here's your daily dosage of Bill and Ted's Excellent Adventure.

I had no clue "Bill and Ted" cards were ever issued. Even better, this one commemorates one of the better lines in the movie.

Strange things are afoot at the Circle K.

It's right up there with "69, dudes!". And I still contend that the mall scene towards the end is one of the best moments in movie history.

I guess the Circle K reference was fitting... 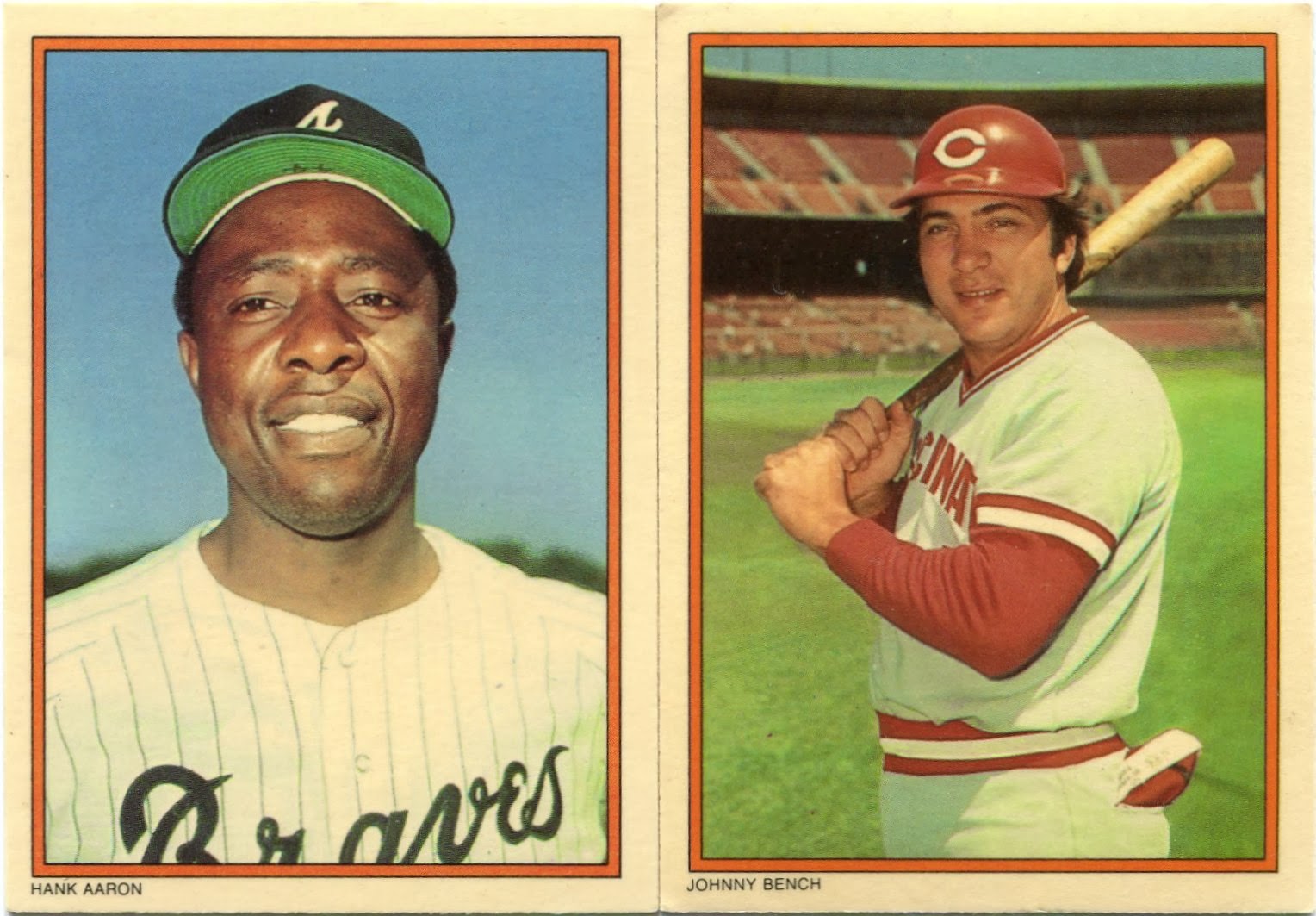 ...because my dad picked up a couple of those as well.

Now that I think of it, I don't think I've ever even seen a Circle K around here. 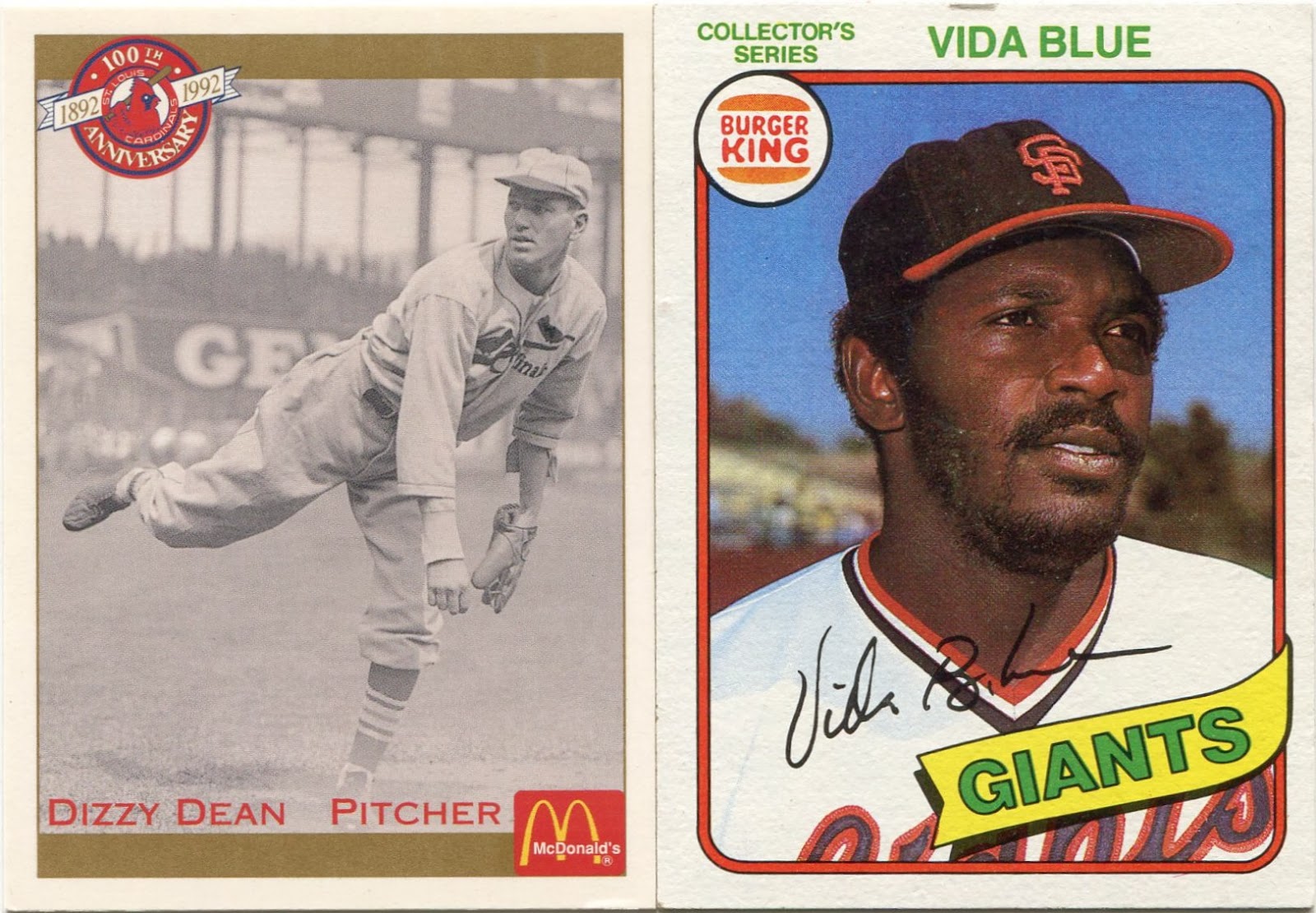 Oddballs became the overarching theme to my dad's birthday gift.

Both McDonalds and Burger King were represented. Though the Blue was new to me, I have a few of those 1980 Topps Burger King issues in my collection already.

However, I've never seen anything from that McDonalds series before. Apparently, they were issued to commemorate the 100th anniversary of the Cardinals franchise in 1992, which just so happens to be the year I was born.

It's funny how the whole birthday theme seemed to come together. 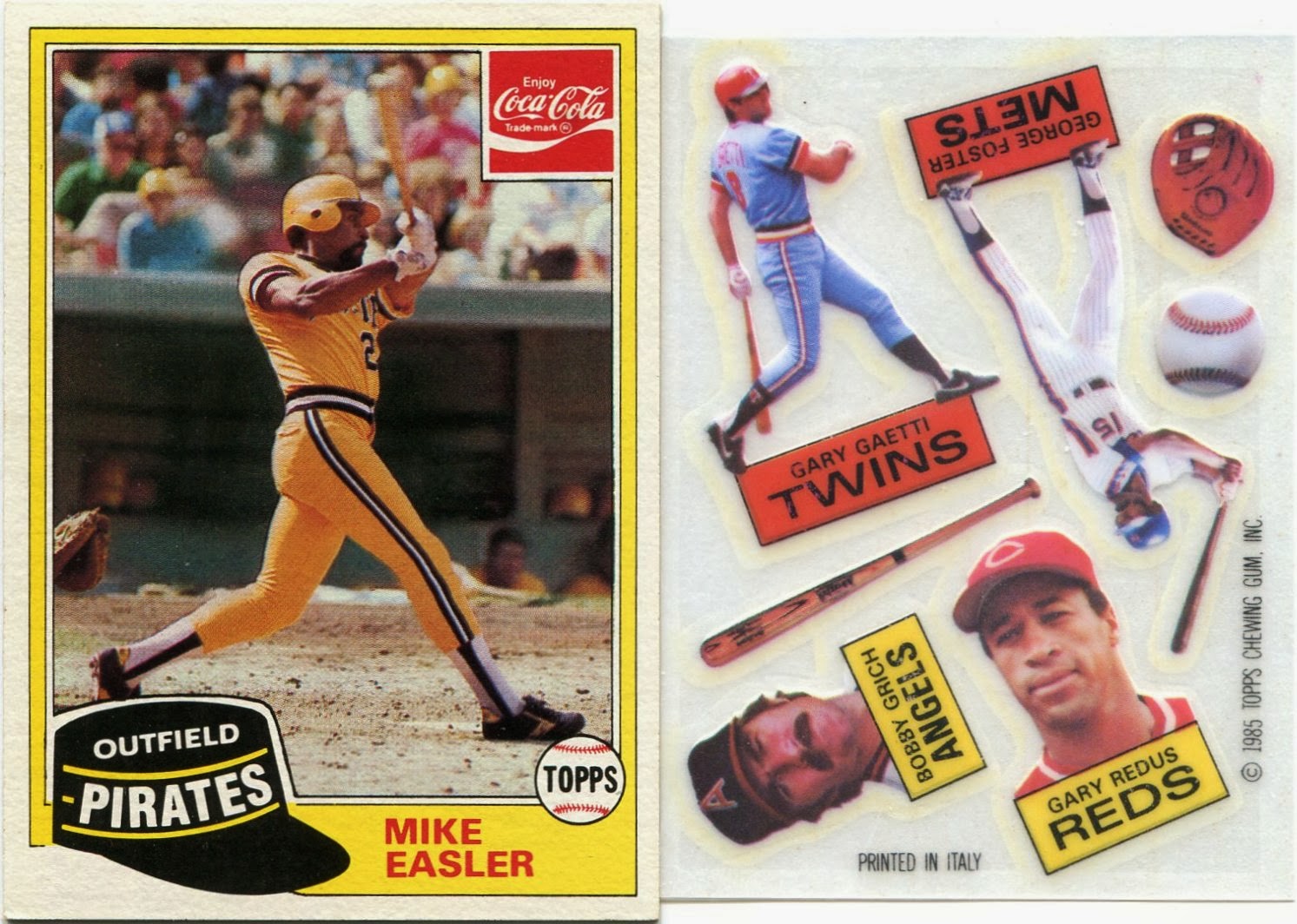 The people at Coca-Cola also had a say in this gift.

When my dad was a kid, Mike Easler stopped and chatted with him and a few of his buddies before a game. I've heard that story from my dad a number of times, and Easler has become part of my top tier of player collections as a result.

Also present was my first encounter with the 1985 Topps Rub-Downs series. Though I like Gary Redus and Gary Gaetti, the real draw to this piece is the inclusion of both Bobby Grich and George Foster. 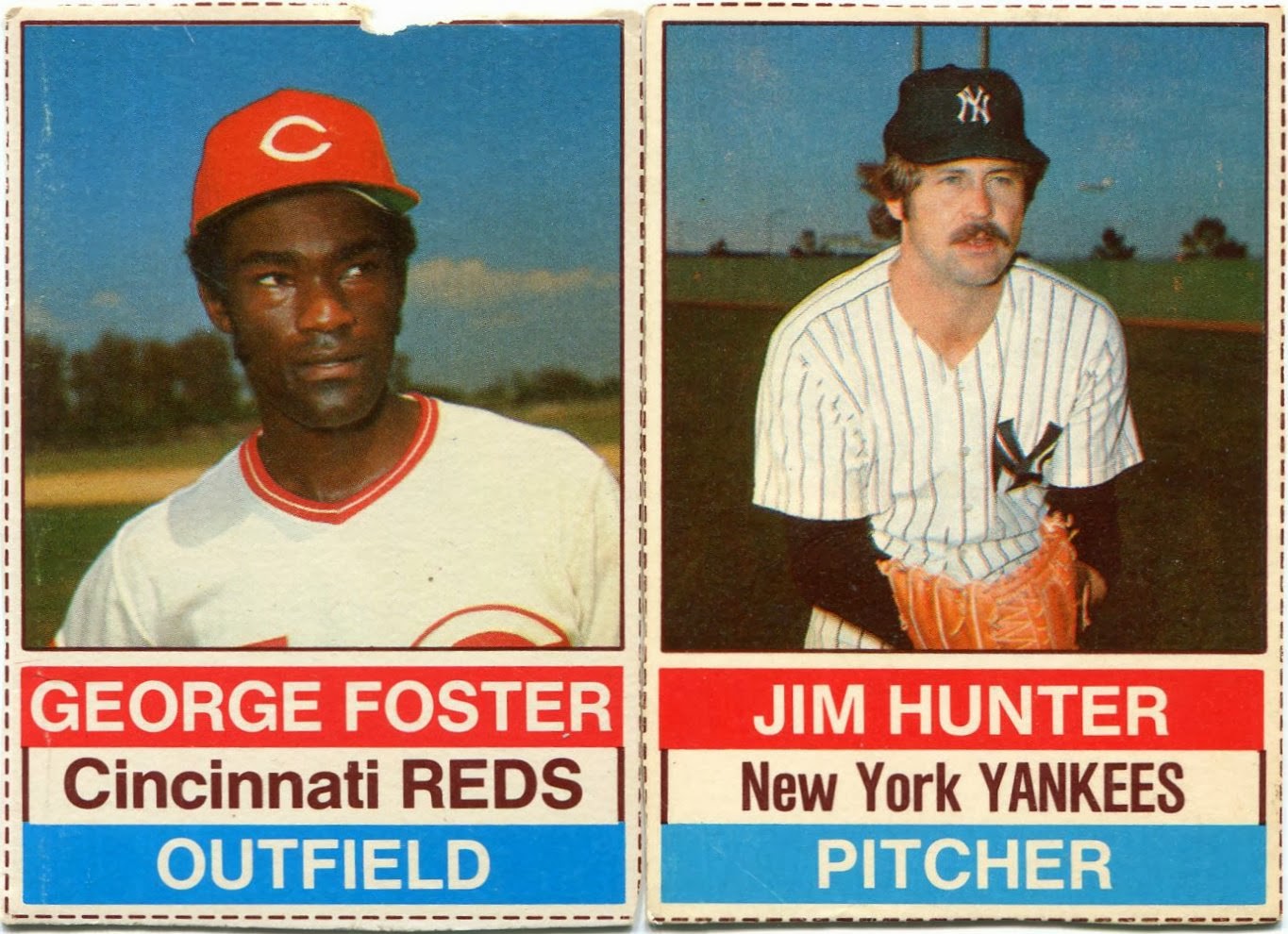 My dad also picked up a couple treasured Hostess cards for me.

Though I've chased after them for as long as I can remember, finding new '70s oddballs for my collection still makes for some of my biggest thrills in this hobby.

Even Hostess couldn't compete with the crown jewel from this birthday gift, though. 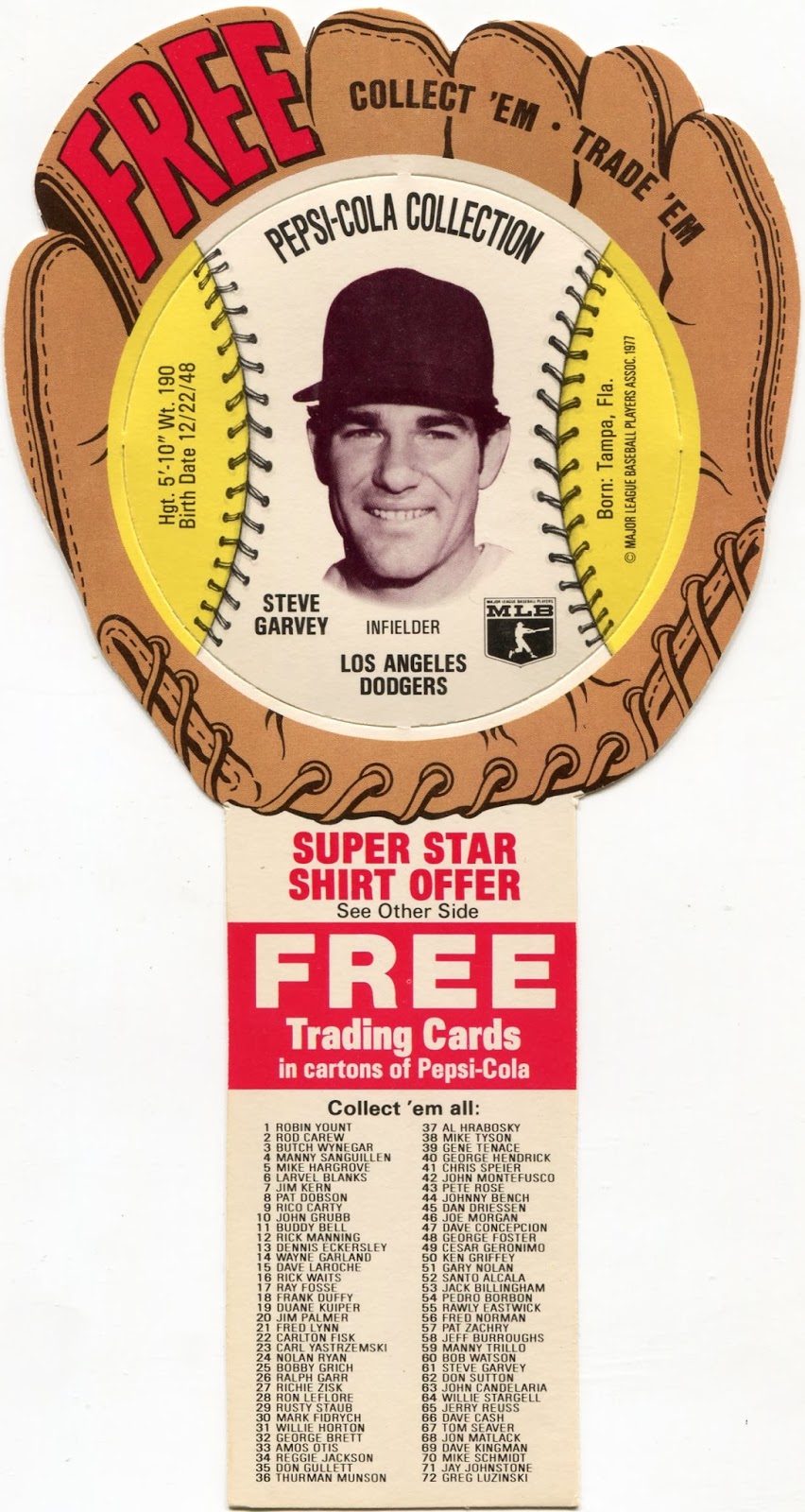 Now that is some serious oddball goodness.

I own a few of these old Pepsi discs, but I'd never seen any in their original packaging. Not in-person, not on the internet, not anywhere.

When my dad unveiled this beauty, my jaw nearly hit the floor. I'd never seen anything else quite like it.

As is the case with quite a few other people around the blogosphere, I collect Steve Garvey. I've been doing so for years.

I think it's safe to say that I have a new headliner for my Garvey collection.

All in all, my dad made a great birthday even better.

I'll say this until I'm blue in the face, but it's so great to have someone that supports my hobby the way he does.

My collection wouldn't be the same without my dad.
Posted by Nick at 6:40 PM

Nick sounds like you have an incredible dad. The Pepsi glove discs are a really neat item. Have the set of Sox myself.. Love the oddballs

Tell Dad my birthday is March 17.

Kinda mad at him right now, though. He beat me to the punch on something I was gonna send next time!

Sweet B-Day. I never knew about that Kaat/Katt error before...

By the way, just saw it on your Dime Box Dozen... I can NOT wait until you come up with that Berkman! WTF!?

Great cards! That Bill and Ted's Excellent Adventures card is "Excellent"! That movie was on the other day and I just had to stop and watch it for a while. The mall scene that you references was filmed at Metrocenter Mall in Phoenix, AZ. My sister was working at the Mall when they filmed it.

Bill & Ted is a top 3 movie for me. You missed it, but I was just playing my air guitar.

"Play With Me" by Extreme totally makes that mall scene.

Ahhh - George Carlin as Rufus. And the princess babes.

Happy birthday! There will unintentionally be a little bday present showing up in the next day or two.