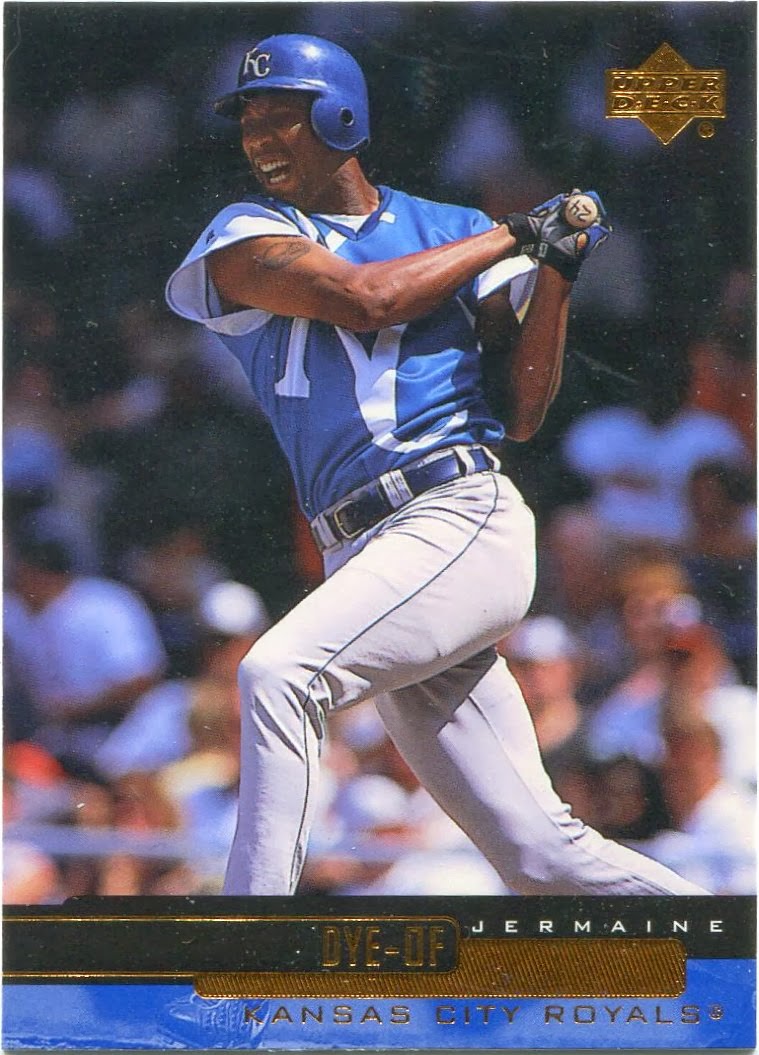 In order to fully tell this story, we need to go all the way back to Christmas.

In contrast with the usual crap luck I have with the things, I actually won about twenty bucks off a few scratch-off lottery tickets.

Naturally, I decided to spend it on some cardboard. I went off to Just Commons to and filled up my cart with about twenty dollars worth of material. I placed the order on Christmas and waited.

If you've bought from them before, you probably know that they're usually pretty fast as far as shipping goes. One week went by with nothing. Another week. Nothing. A third week. Nothing.

It was at this point that I decided to contact Just Commons to see what had happened to my order. As it turns out, they accidentally shipped my cards to someone else, and that person never sent them back or attempted to correct the mistake in any way.

Mistakes are bound to happen with online shopping, so I wasn't all that upset. Just Commons refunded me in full after the mishap.

Finding myself with a few extra bucks in my pocket recently, I gave the site another shot. This time, Just Commons returned to their usual perfect self. I received the cards in no time, showing that the prior experience was merely a deviation from the norm.

One of the headliners from this particular order was the Jermaine Dye you see above, a former "Dime Box Dozen" need of mine.

I will forever be fascinated and horrified by that futuristic jersey experiment. 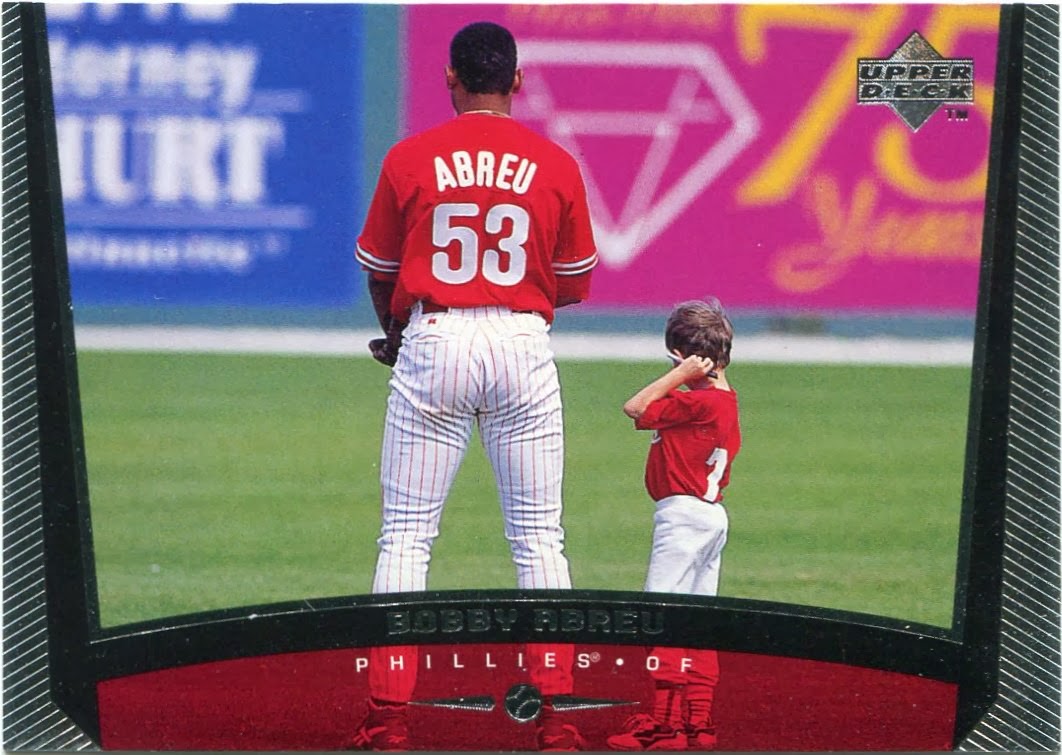 One thing I like about Just Commons is that they have a great selection of late '90s cardboard.

For whatever reason, cards from the era that can be fairly tough to find. A lot, as I've found, feature great pieces for my many mini-collections.

This one from the "salad tongs" 1999 Upper Deck checklist hits both my "cards with kids" and "anthemic" themes. 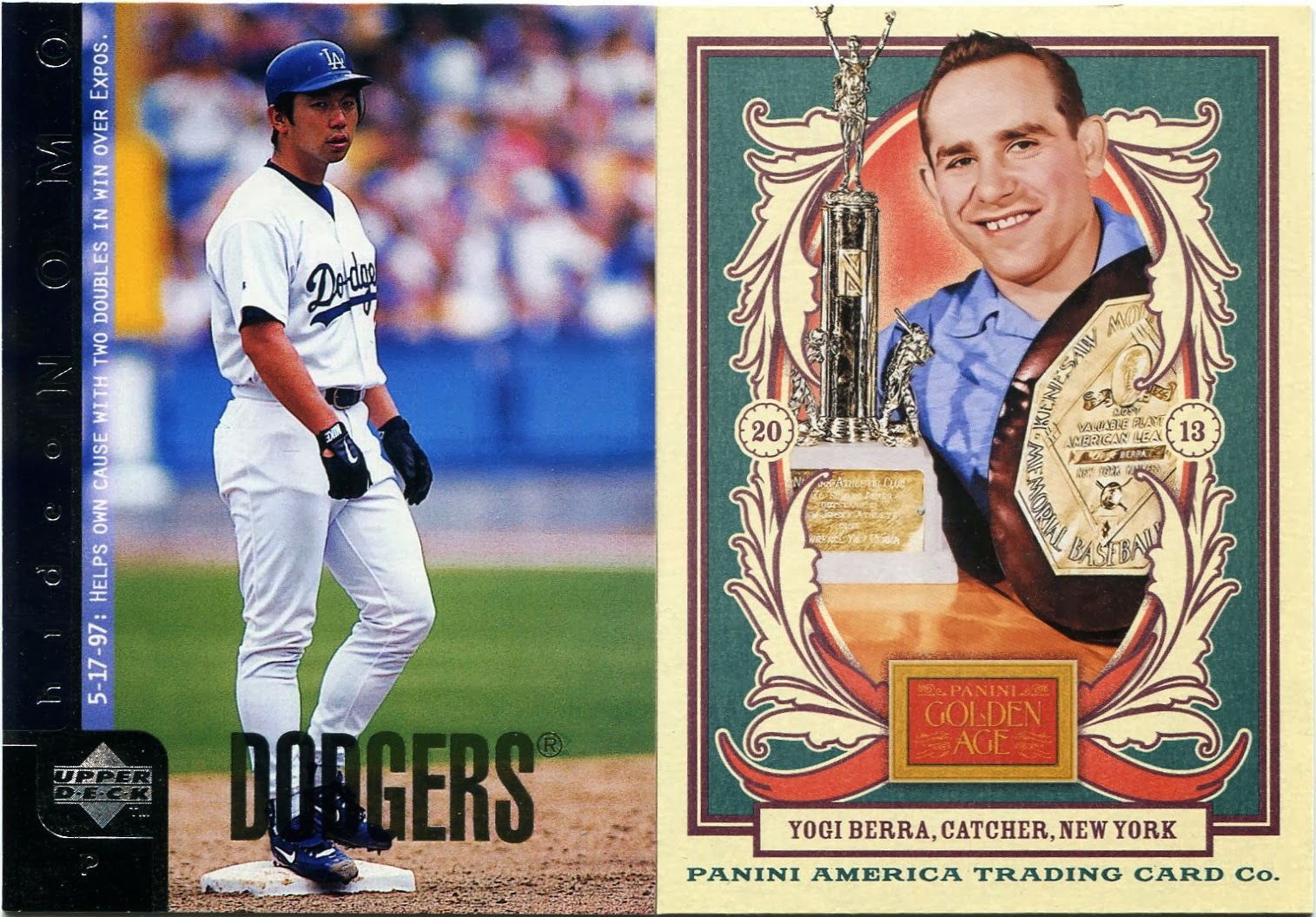 Also partaking in the mini-collection fun were these awesome "pitcher on the basepaths" and "award show" cards.

I was inspired to pick up the Berra after seeing it on Daniel's blog, which is fitting considering the whole "award show" idea started with him. 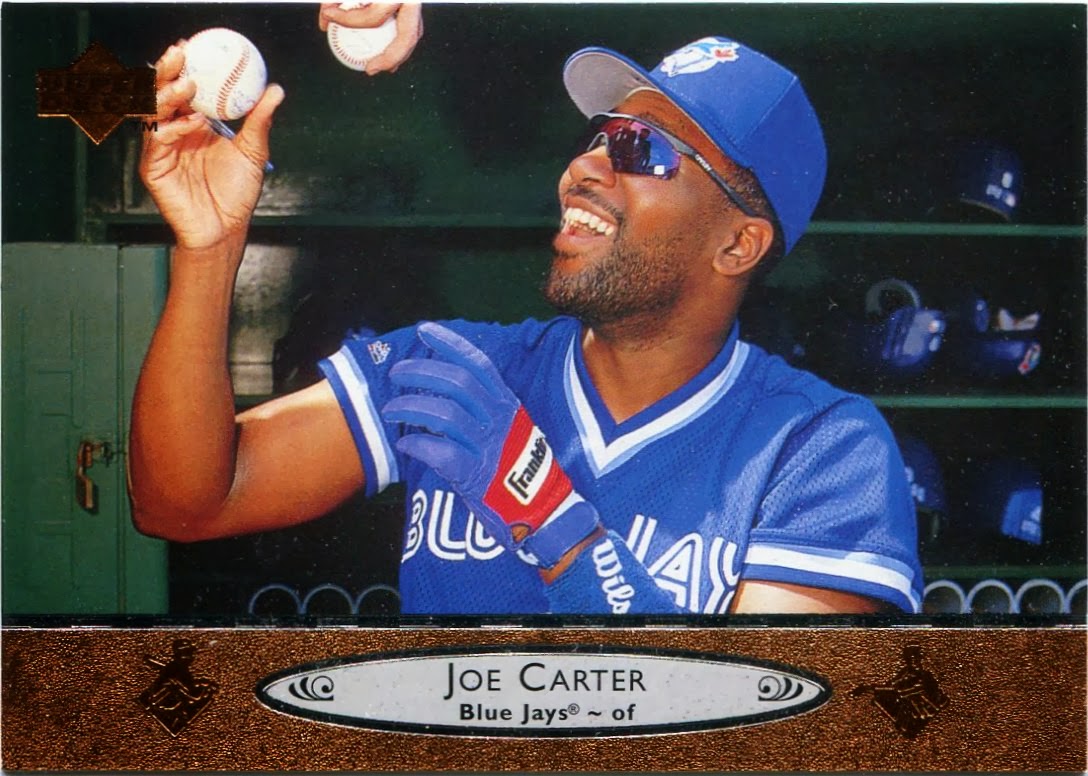 There's just so much I haven't discovered from what is kind of a lost era for UD.

This great "autograph" shot of Joe Carter is certainly one of those diamonds in the rough. 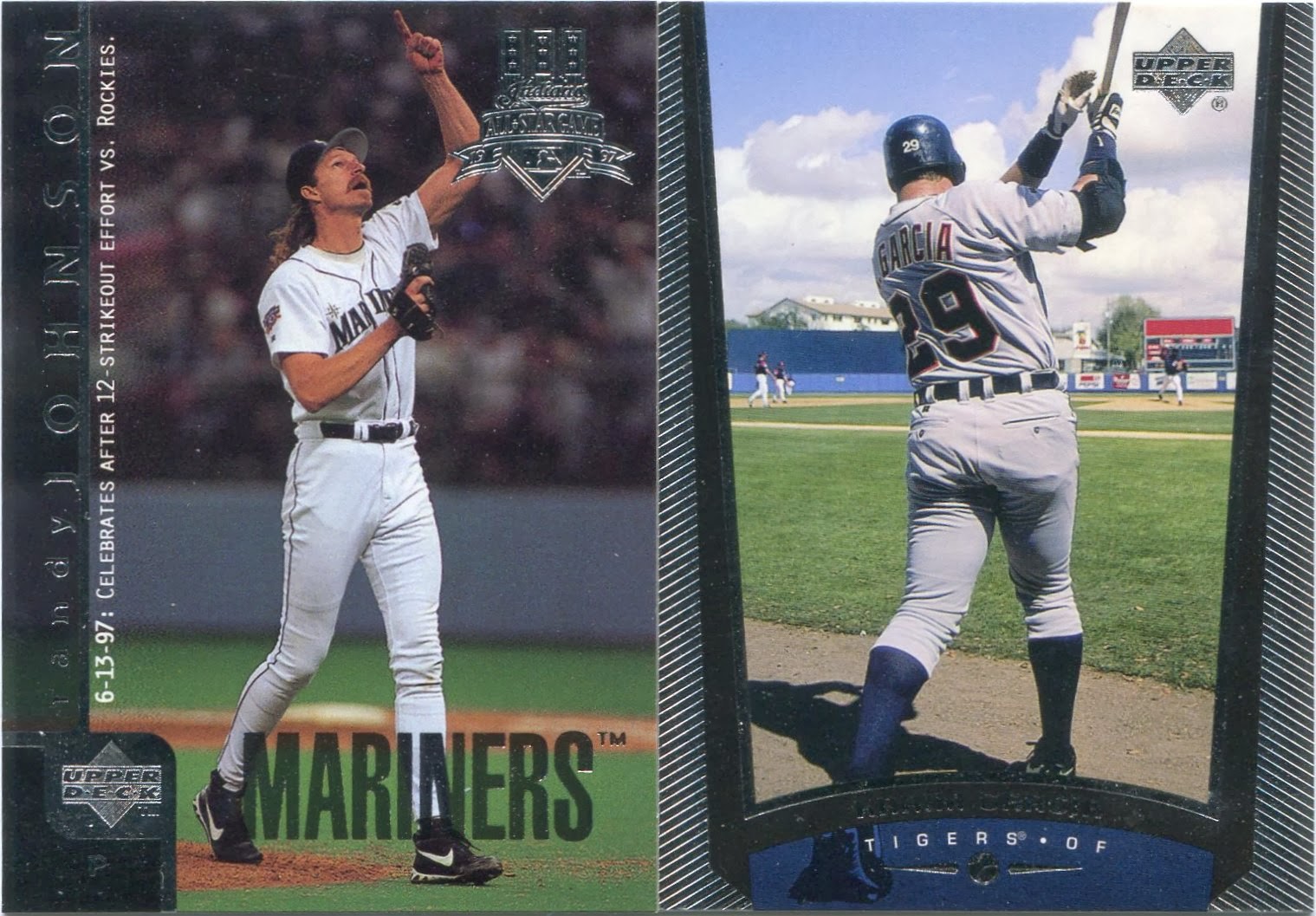 I'm a sucker for panoramic on-deck shots like the Garcia. 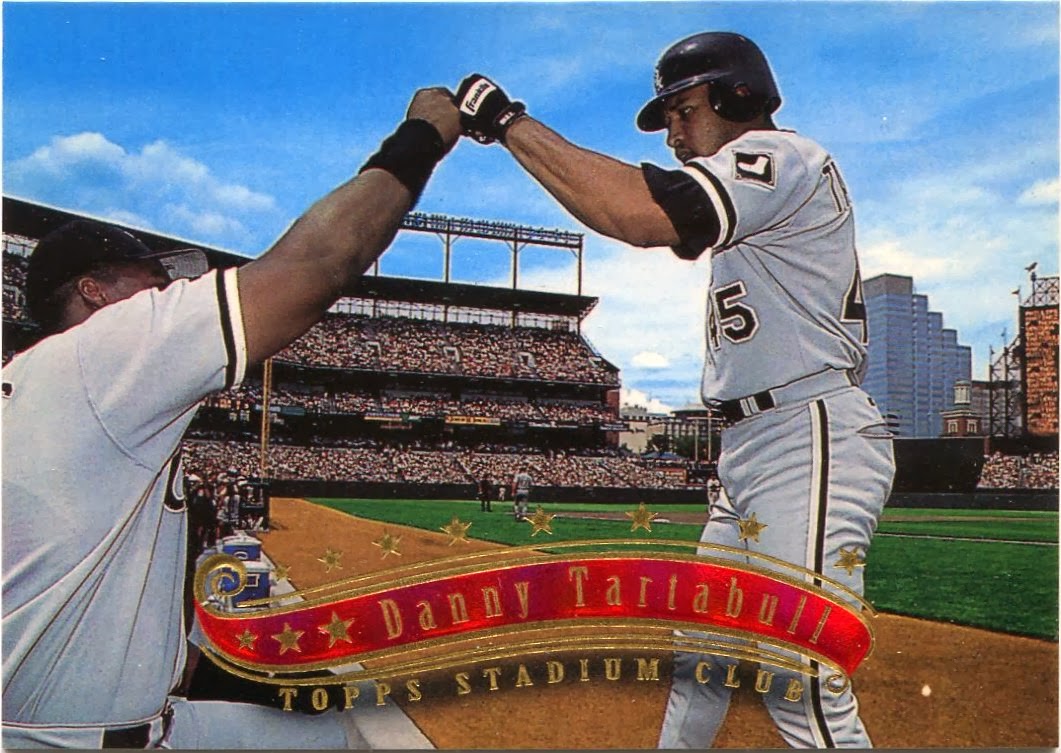 For now, though, let's take a slight detour from Upper Deck and move into the world of Stadium Club.

If you've been on Just Commons before, you may have noticed that their homepage features links to all the sets they've recently gotten in stock.

At the time of this order, 1997 Stadium Club happened to be one of those. Knowing how beautiful of a set it is, I decided to take a look and see what kind of gems I could unearth for myself.

This sweeping "fist bump" shot of Danny Tartabull was just the start. 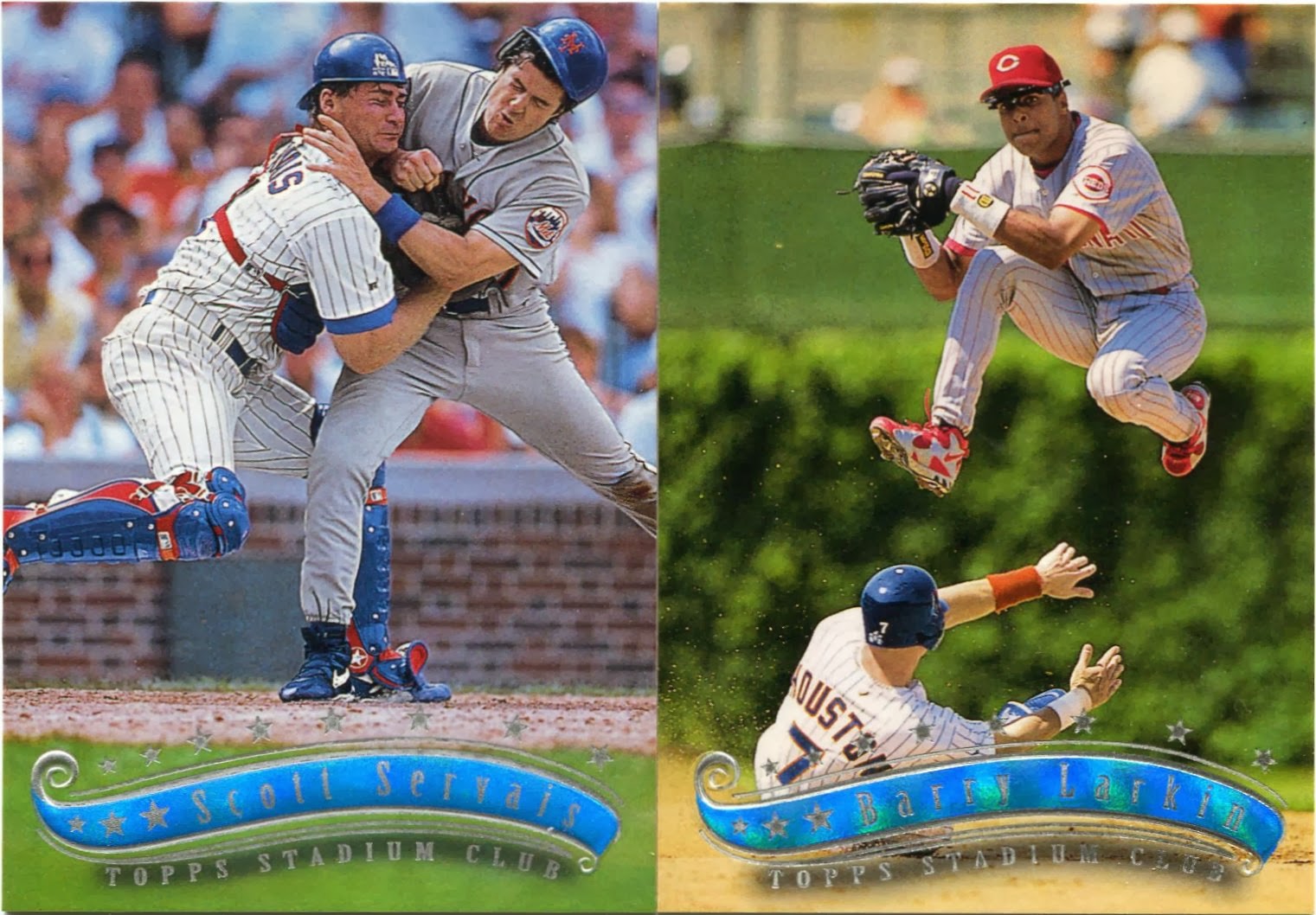 Take a look at these superb Wrigley Field shots.

It's safe to say that these are a couple of the greatest "play at the plate" and "double dip" cards ever created. 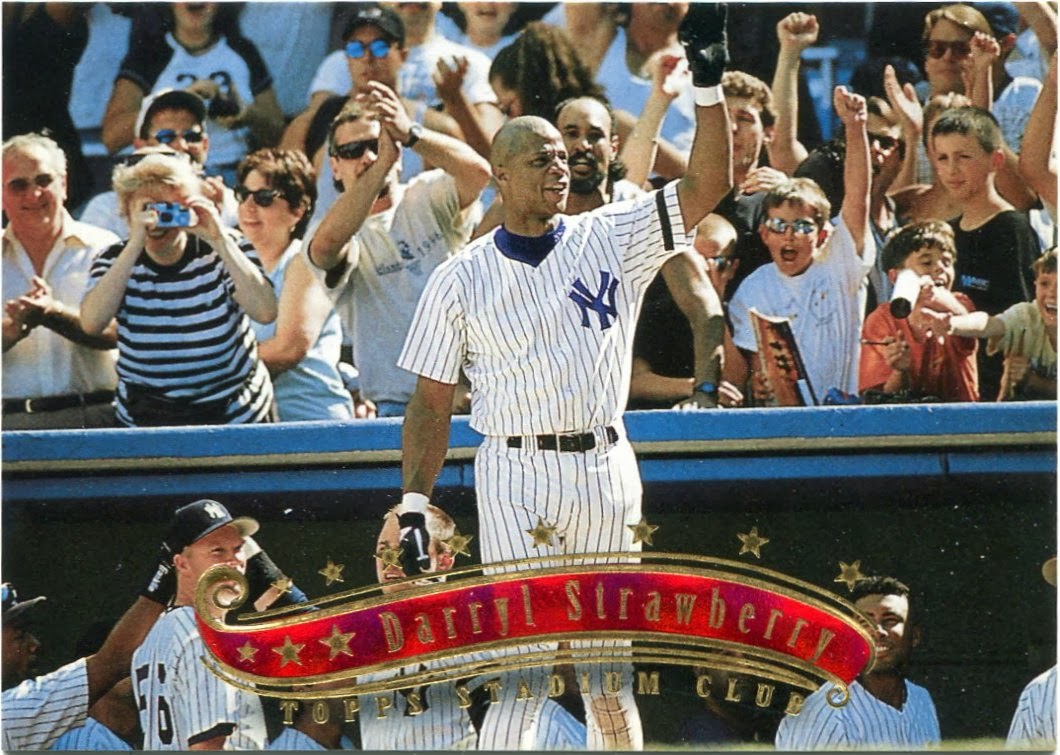 Anyone who says baseball cards can't be art needs to take a long look at Stadium Club.

These are masterpieces the hobby hasn't seen the likes of since. 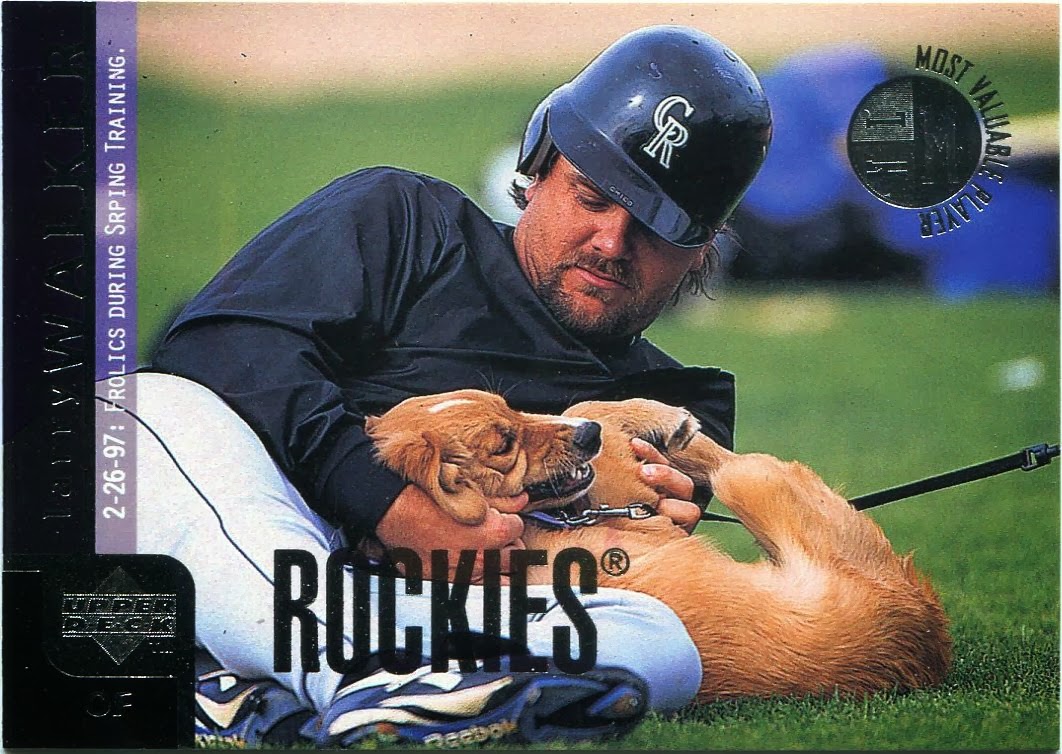 Though intense "plays at the plate" and sweeping stadium shots are always great, there was room in this order for some good natured cardboard fun as well.

This Larry Walker was set to be one of the better pieces from my lost order. Luckily, Just Commons had more than one in stock, so I was able to make it a part of this lot.

It's always pleasing to see a puppy frolicking on cardboard. 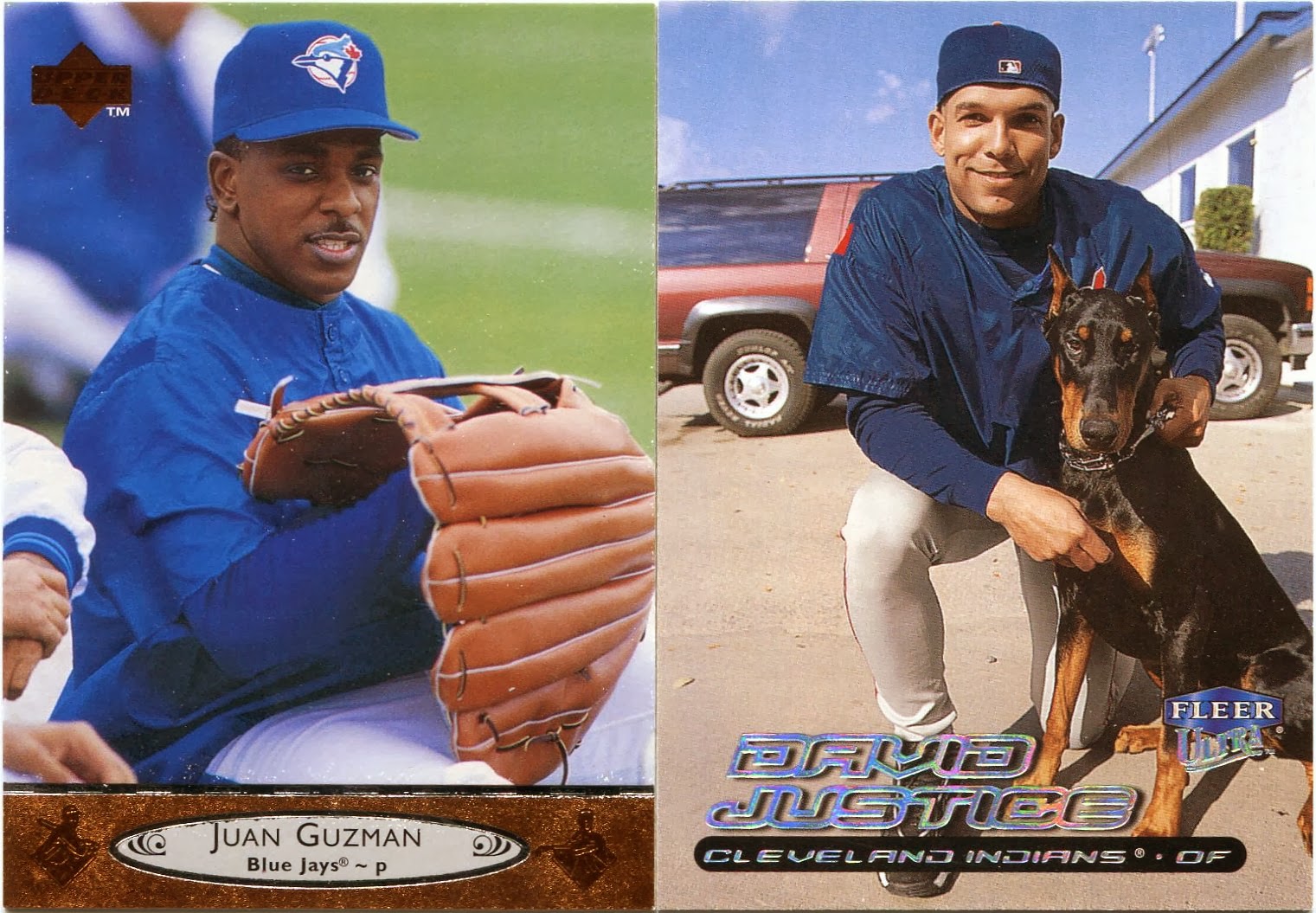 The Walker wasn't even the only canine-themed card I bought.

I'm not sure how or when I first came across that Justice, but I knew I needed to own a copy as soon as possible. It's those kinds of "outside the lines" shots that I wish would have a bigger role in today's hobby.

As I've found, hilariously giant baseball gloves make more appearances on cardboard than you might think.

The Guzman is a terrific new addition to the small "plus-sized equipment" mini-collection I've been building over the years. 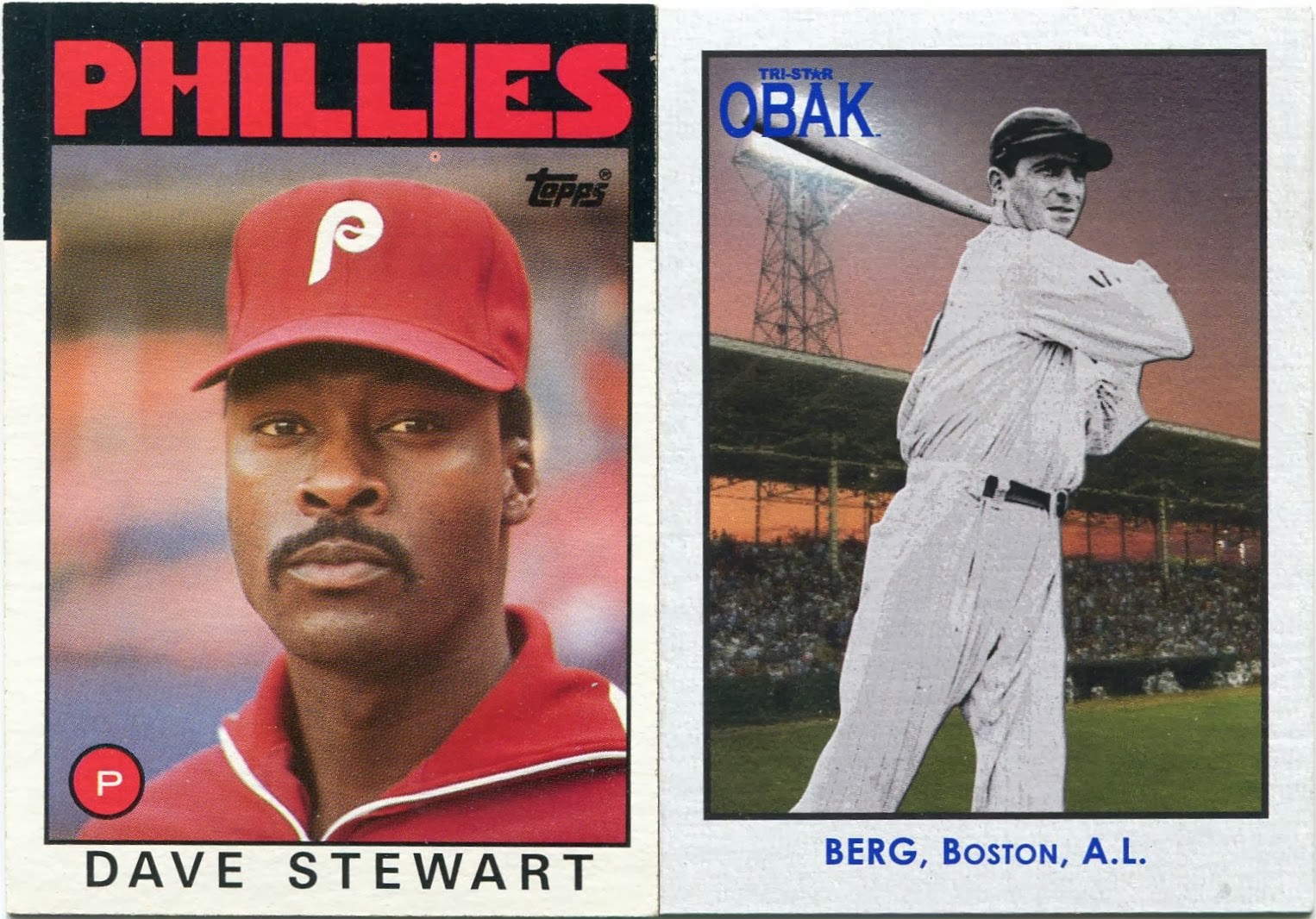 Here's a few cards that I couldn't believe I didn't own already.

Though he was a marginal big-league catcher, Moe Berg is fairly well-known amongst baseball circles. Why?

The guy served as a freaking U.S. spy during World War II. Sadly, there aren't many cards of his around. I think that's the third one in my collection at the moment.

Before this order, I didn't own a single card of Dave Stewart as a Phillie. Thanks to Just Commons, I now have three, including the '86 Topps single you see above. (The other two were his '86 Donruss and Fleer issues.)

"Smoke" spent a total of 12 games in Philadelphia during the 1985 and '86 seasons. In a move I'm sure the Phillies wish they could take back, they released the future 20-game winner in May of 1986.

The A's scooped him up a couple weeks later, and I'm sure we all know the rest. 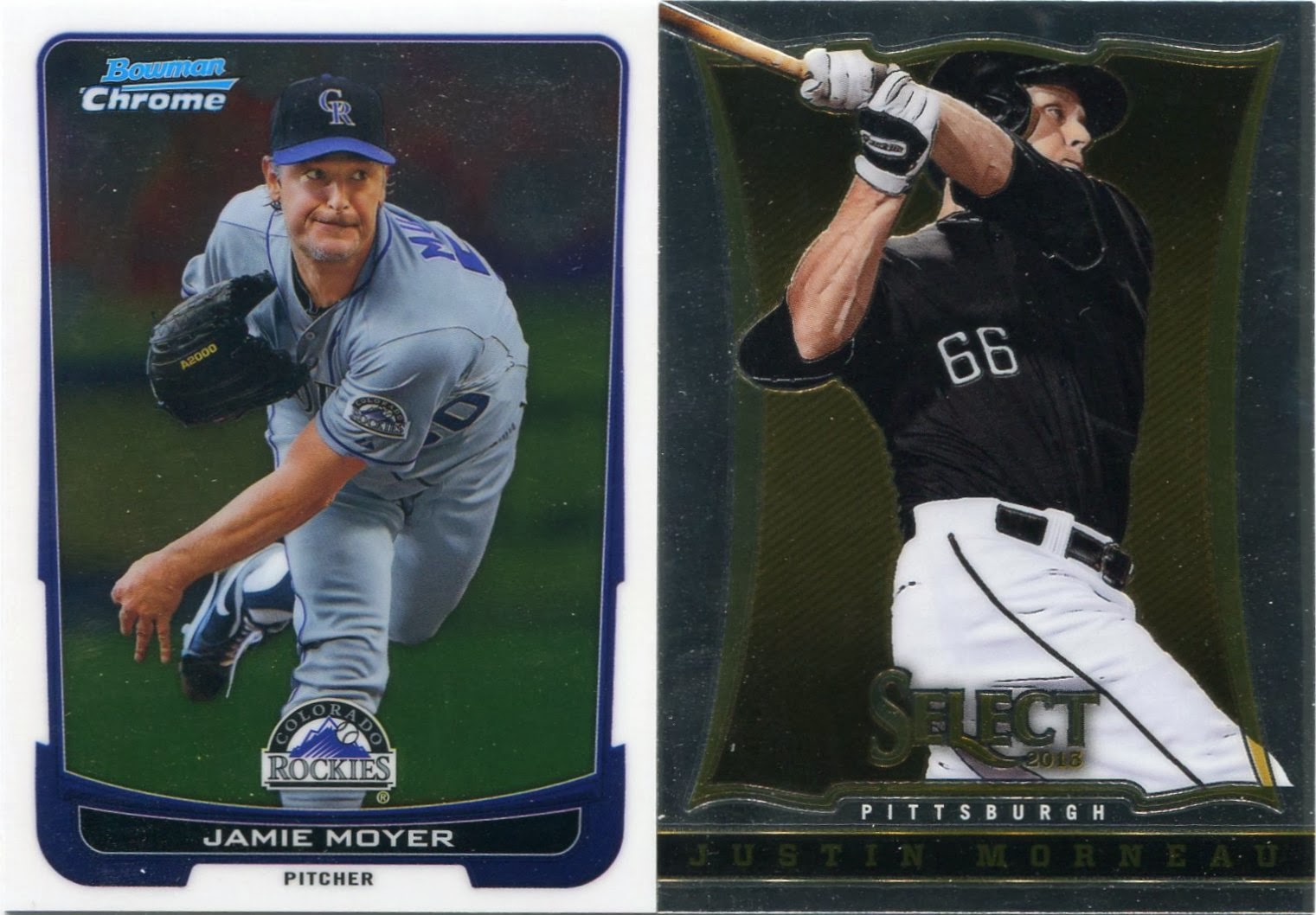 Speaking of "Short Term Stops", here's a few newer ones to add to the fold.

I didn't even know Jamie Moyer made the 2012 Bowman Chrome checklist until I read one of Mark's posts a short while back. I guess that's one of the few downsides to ignoring the brand.

The 49 year-old Moyer famously spent a portion of the 2012 season with the Rockies, becoming the oldest pitcher to win a big-league ballgame in the process. Cards of him in Colorado are great pieces of history.

At a whopping 75 cents, the Morneau surprisingly took home "Most Expensive Card of the Order" honors.

I barely heard anything about Panini's Select brand when it hit the shelves. To me, it looks like a Prizm knock-off, which isn't a compliment.

Shockingly, he's nowhere to be found in this year's Topps. Though there's a slight chance Morneau might pop up in Heritage, I'm not betting on it.

I guess Select was good for at least one thing. 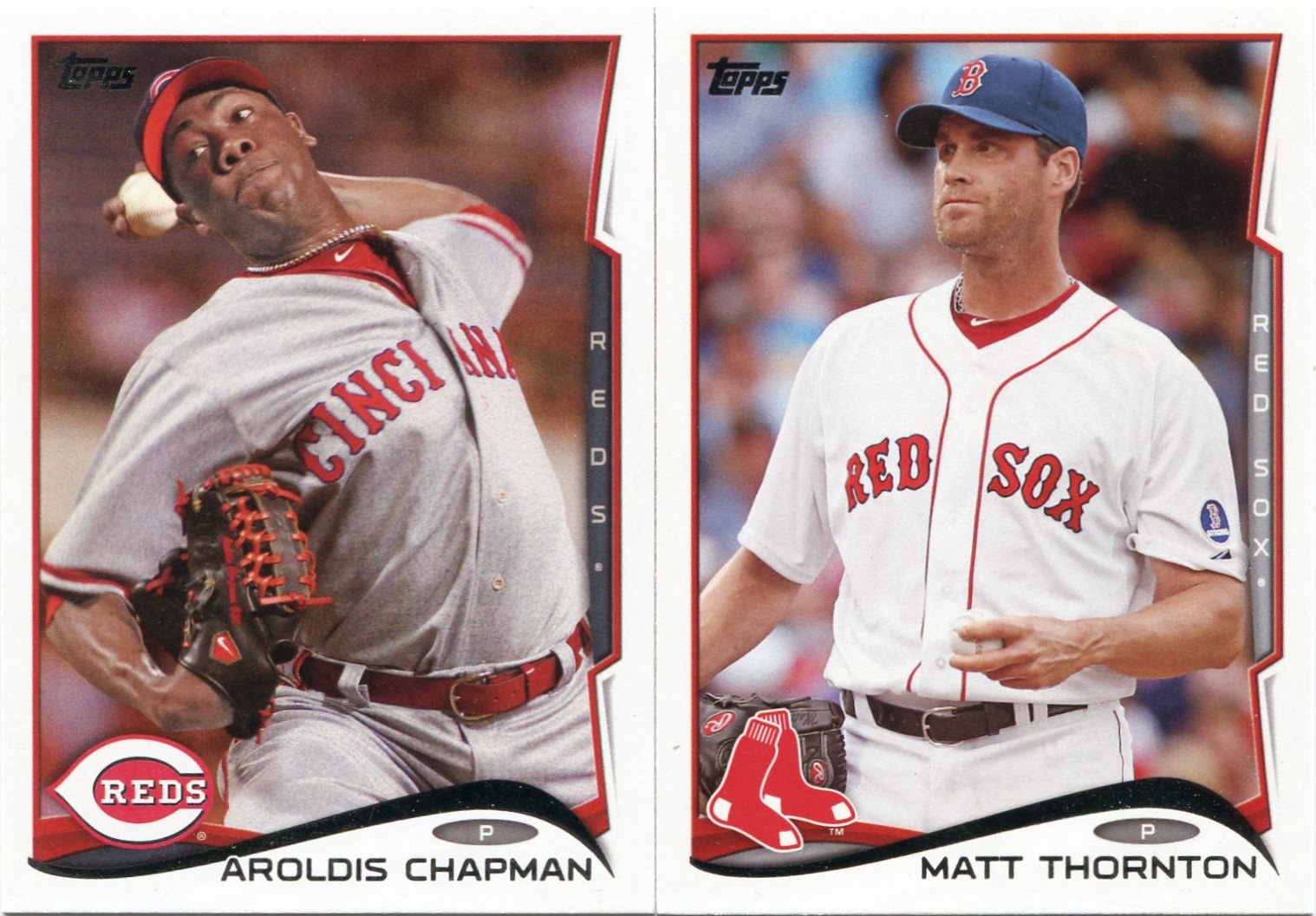 Another thing I love about Just Commons is that they have singles from the latest and greatest sets available at very reasonable prices.

Through packs and trades, I had all but two cards I needed from the 2014 Topps base checklist. Aroldis Chapman and Matt Thornton were the pair of missing suspects.

Thankfully, Just Commons had those last two pieces to the puzzle. 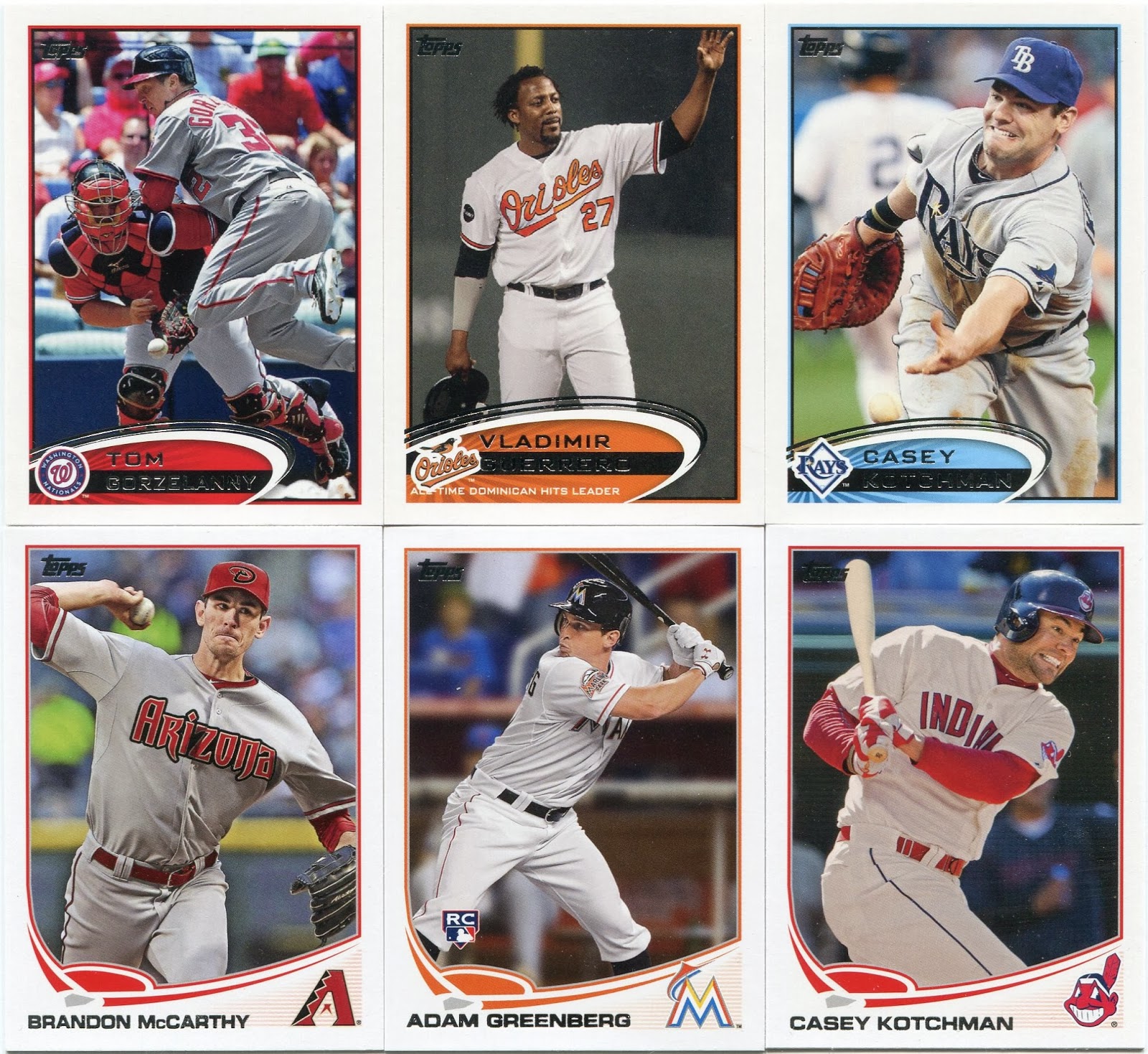 The one dominating presence of this order, however, came in the form of Topps Minis.

I've basically ignored Topps's online-only cash grab with these things the last few years. I had absolutely no desire to pick up a box, and none have managed to pop up in discount bins. I was basically in the dark, but I didn't mind all that much.

For some reason, the prospect of owning a few of these things has started to intrigue me lately. Something about seeing everyday Flagship cards in mini form caught my fancy.

As a result, I splurged and snapped up a few of my favorite cards from the last couple years of Flagship.

On top are minis of a few of 2012 Topps's finer moments, including Tom Gorzelanny's "pitcher on the basepaths/play at the plate" combo and Vlad's "sunset" issue.

The star of the bottom row, of course, was Adam Greenberg, my nominee for 2013's "Card of the Year". 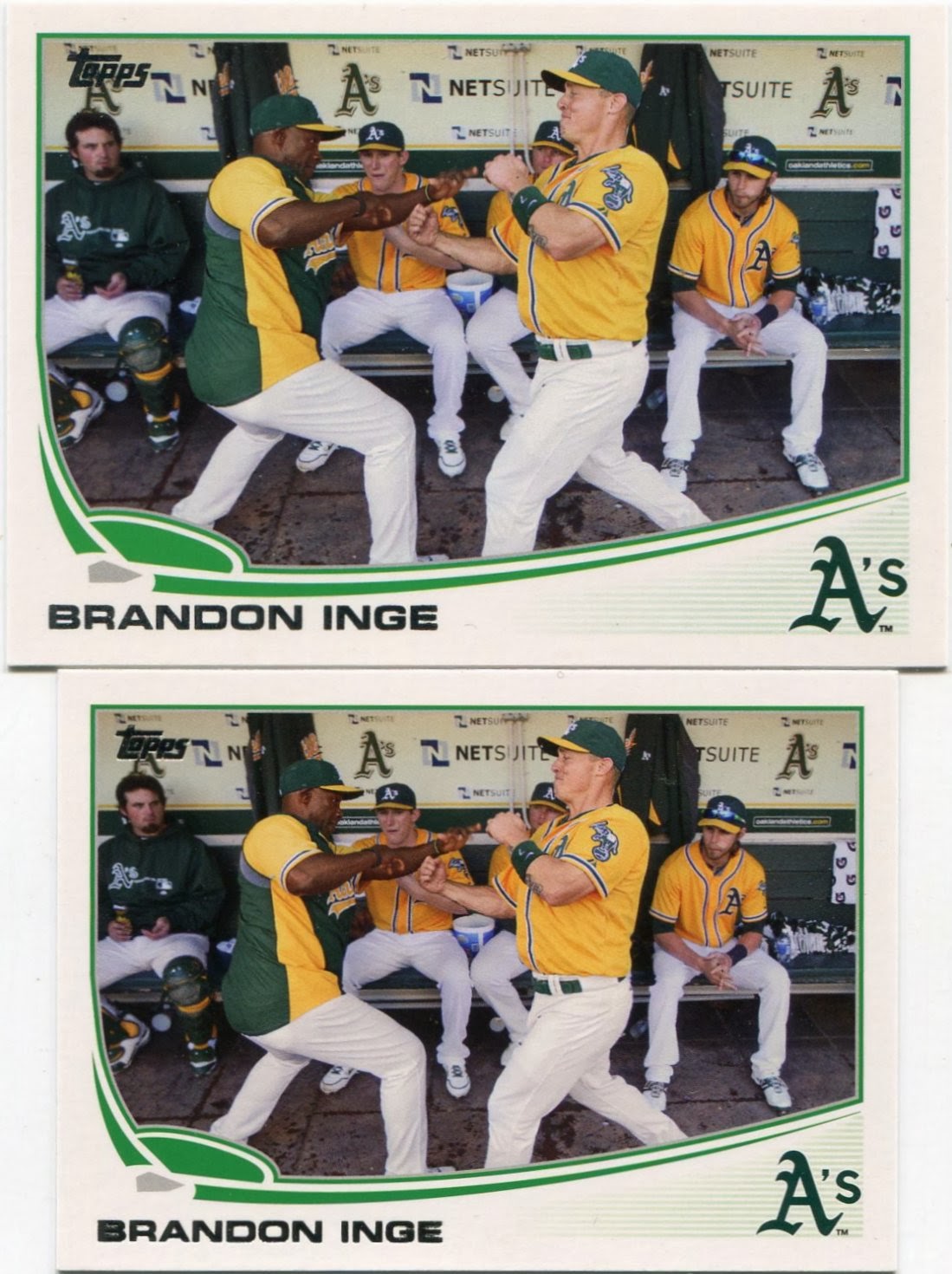 A close second was Mr. Inge.

I'm now the proud owner of his mini as well. I even scanned it next to the regular-sized card in case you didn't believe me.

Aside from the Vlad (60 cents), all of these minis were priced anywhere between 20 and 30 cents a piece.

I may just have to include a few more in my next Just Commons order.

I'm not going to let one minor mishap stand in the way of a great cardboard relationship.

Just Commons is still my go-to source for great cardboard.
Posted by Nick at 6:39 PM

Love the pup playing with Larry Walker! Wish my wife weren't allergic. That may be her only fault...

Dear Lord I want to forget Turn Ahead the Clock. Thanks a frigging lot, Nick!!!

I actually had a similar incident with Just Commons around Christmas. I have held off on ordering again from them, but if it worked out well for you then I will probably make another order myself.

Justin Morneau will be in Heritage, but he will probably be shown as a Photoshopped Rockie. That has been Topps' MO over the past few years.

I was hopeful never to have to look at those Royals uniforms again. Thanks!

I love Just Commons, but I've done 4 or 5 orders with them at this point, and every time there's 1 or 2 wrong cards. At ~15 cents a card, it's not enough to really get peeved about, but still annoying. Hopefully one of these days I'll have a "perfect" experience with them.

I can't sing the praises of 'Just Commons' enough. They delivered all the way to Australia, and in the process managed to knock out the last remaining cards I needed in no fewer than 20(!) different sets. Some of the cards they had were ones I had been looking for since the 1980's. If it wasn't for your Blog, Nick, it would probably be the site I visit most.