You, me, and SSPC 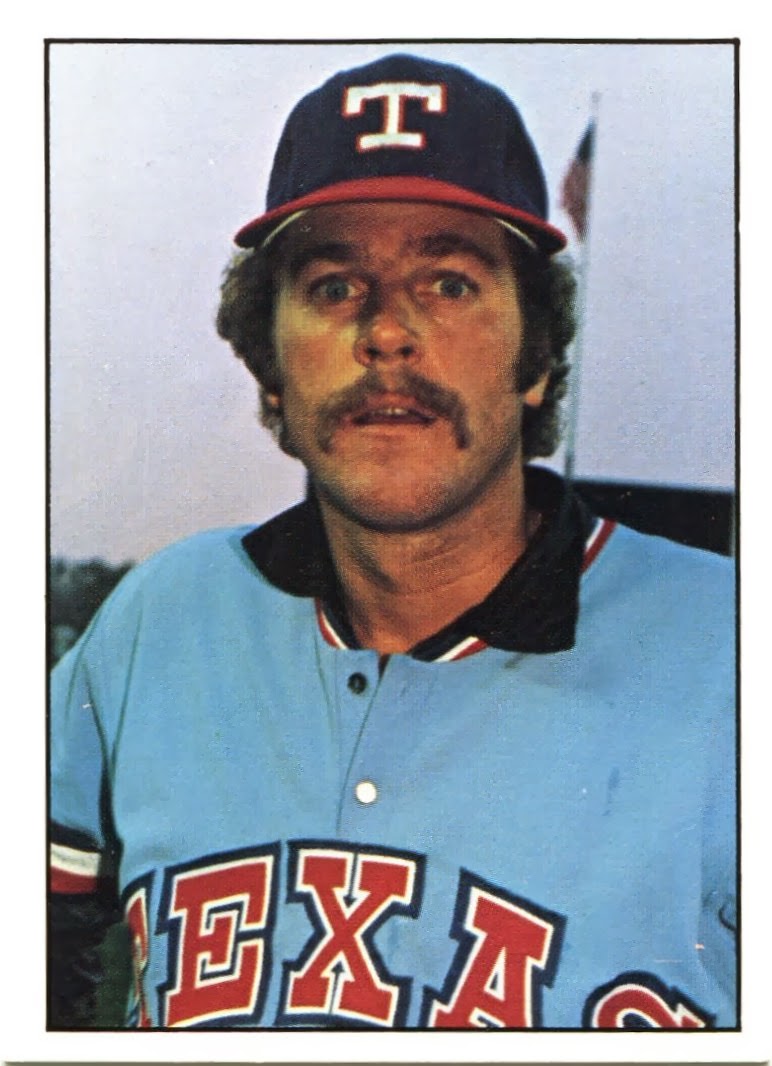 As I recently found out, jealousy can have its benefits.

If you're a frequent reader of the blogs, you might remember the "kraken" that our good buddy Wes of "Jaybarkerfan's Junk" unleashed on one unsuspecting blogger.

Tom of the terrific blog "Waiting 'til Next Year" was the beneficiary of a whole bunch of amazing blogger generosity. One particular aspect of it caught my attention.

The "kraken" just so happened to include a gigantic stack of 1976 SSPC singles, a set which happens to be one of my favorite oddball releases of all-time. It played a major role in why I declared a past discount dig as "The Best Quarter Box on the Planet".

So, although I'm always happy to see such sweeping acts of generosity, I couldn't help but be a little jealous of Tom's good fortune. I've never seen that many SSPCs in one place.

Though it's not something I usually do, I couldn't help but email Tom and ask if he happened to have any extras from that SSPC rampage. Fortunately for me, he was more than happy to send along a budding stack of spares he had available.

I'm not sure if the Cubs I sent Tom were an equal return, considering the insane amount of fun I had digging through these.

One particular single that caught my attention was the Steve Hargan you see above. I've never seen someone with a more frightened look on their baseball card.

I can't help but wonder what was going on off-camera during that shoot. 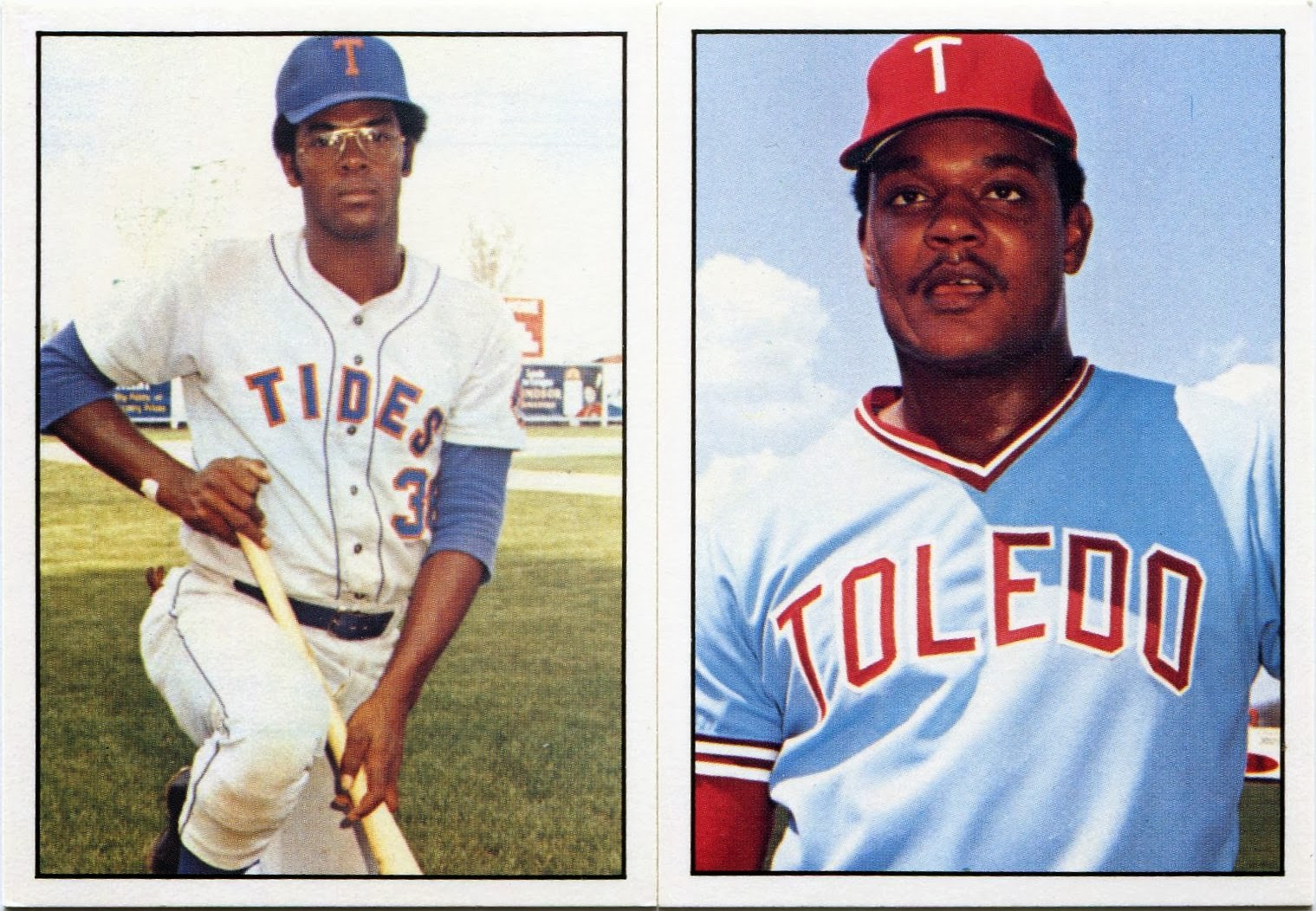 For those who are new to the world of SSPC, here's a few basic facts to know.

1) While SSPC released a few other sets in the late '70s, their 630-card 1976 edition probably remains the most famous.

2) From what I understand, you could only purchase these directly through SSPC at the time of their release in factory set form. No loose packs were available. Complete sets cost $10.99.

3) The backs were edited by a young and up-and-coming reporter named Keith Olbermann.

4) A few of the cards feature players in minor league uniforms.

I didn't know about that last one until Tom hinted at it in our emails. Just like he said, a few out-of-place minor leaguers popped out of the SSPC stack.

It's a wacky addition to what is already a pretty crazy set. 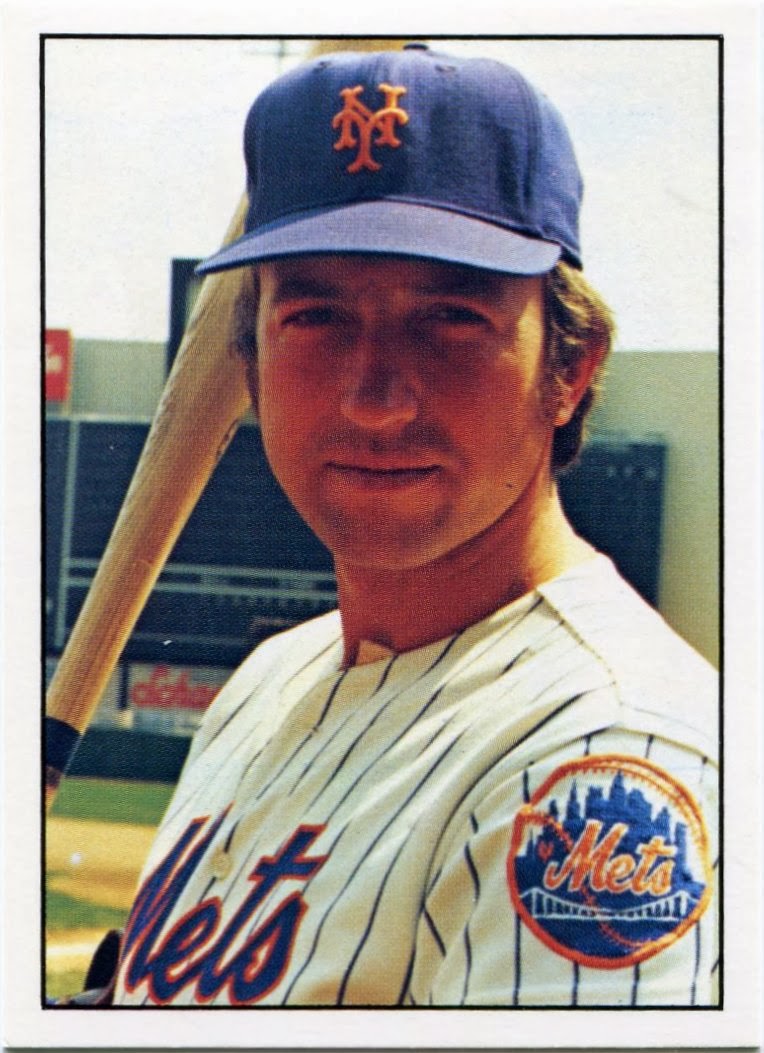 For one thing, I'm still trying to track down Willie Randolph's card from this set. To my knowledge, it's the only solo card to feature him as a Pirate, which is the reason it's kind of a "white whale" of mine. (If you happen to have an extra copy, please let me know.)


You also won't find any action shots in this checklist. That may seem like a detractor at first, but there really are some nice poses once you look deep into the depths of SSPC.

This one of former Met hurler Jerry Koosman with a bat in his hands was one of my favorites.

They also greatly differ from the cards Topps was issuing at the time, as there aren't any team logos or facsimile signatures to be seen on the fronts of SSPCs. 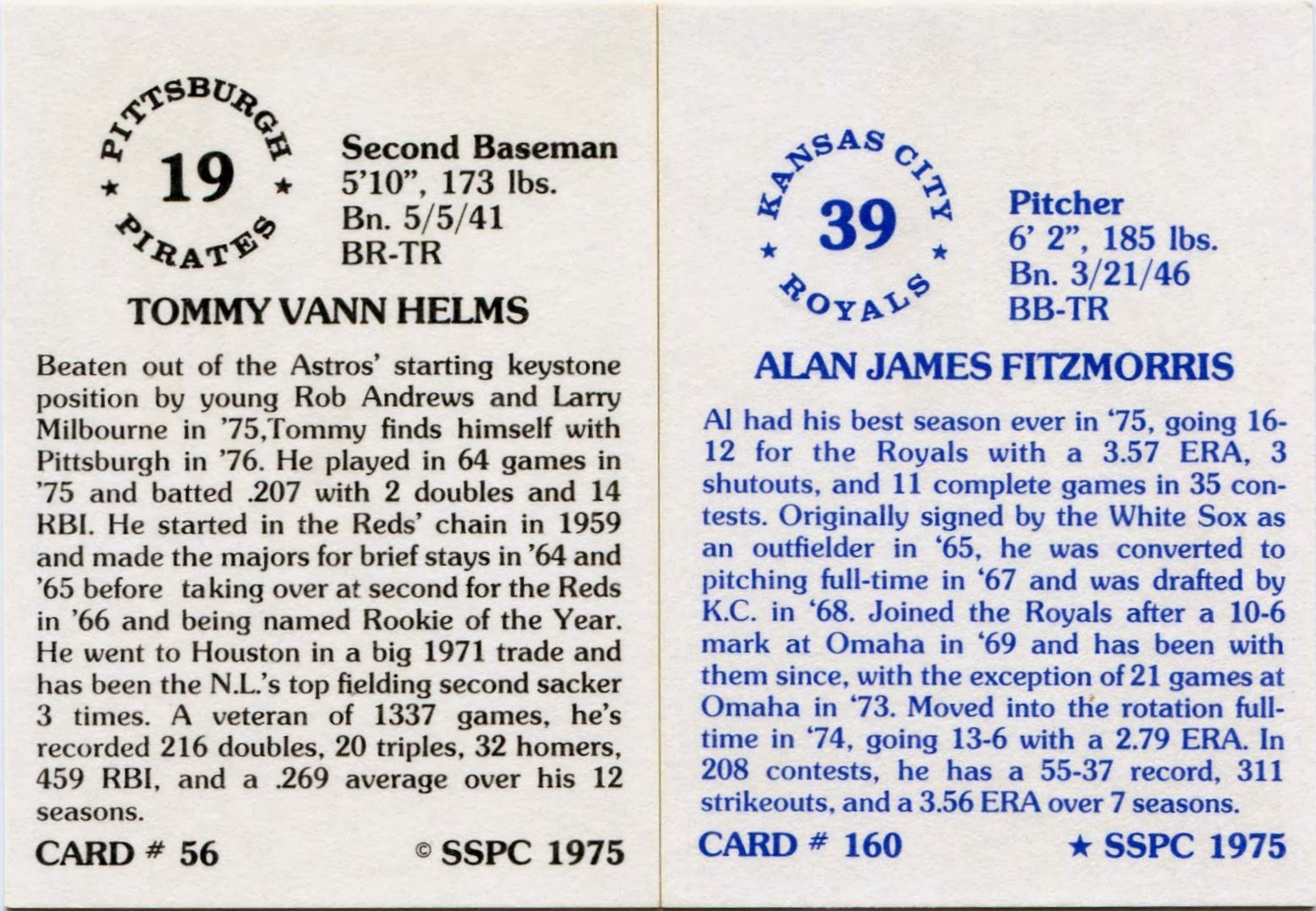 With that, the backs were unlike anything the baseball card world had seen at the time.

Instead of career stats, the people at SSPC whipped up deeply detailed bios for each individual player. The text is even color-coded to match the guy's team. I can't say I've ever seen that before.

I'm also a big supporter of SSPC's decision to prominently include jersey numbers on the backs.

If you ask me, not nearly enough sets have that. 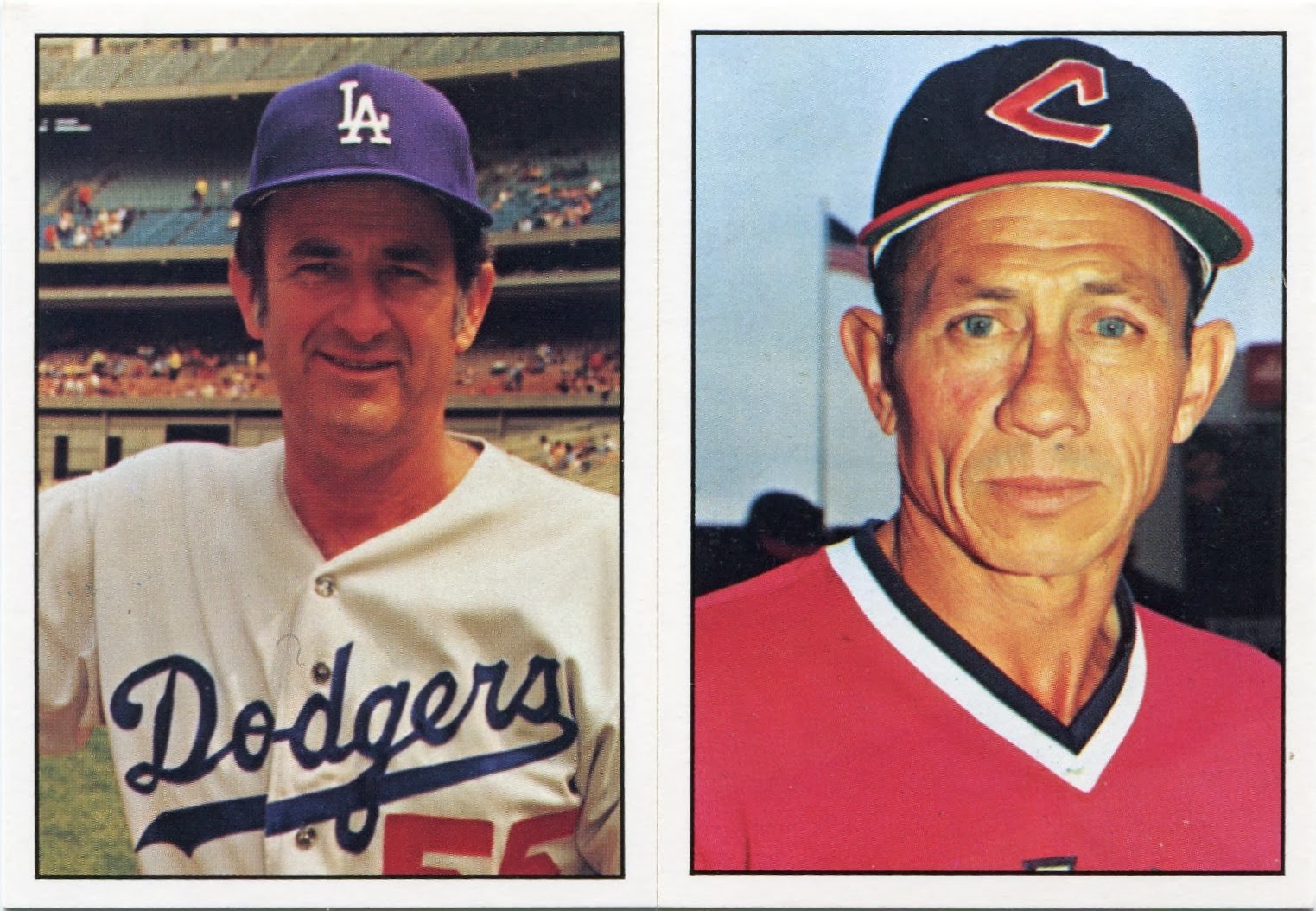 Perhaps the best SSPC innovation was the inclusion of solo coach cards.

Before SSPC came along, such a thing was almost unheard of in the hobby. At best, coaches would get brief cameos on manager or team cards in Topps checklists.

The people at SSPC, however, felt that coaches deserved their time in the spotlight. How right they were.

I never knew that Mickey Vernon was a hitting instructor for the Dodgers in the mid '70s. Or that the "almost perfect" Harvey Haddix once served as the Indians' pitching coach.

It's all thanks to SSPC. Though Tom's mailer included some neat minor leaguers and coaches, he mixed in a few more conventional player collection needs as well. 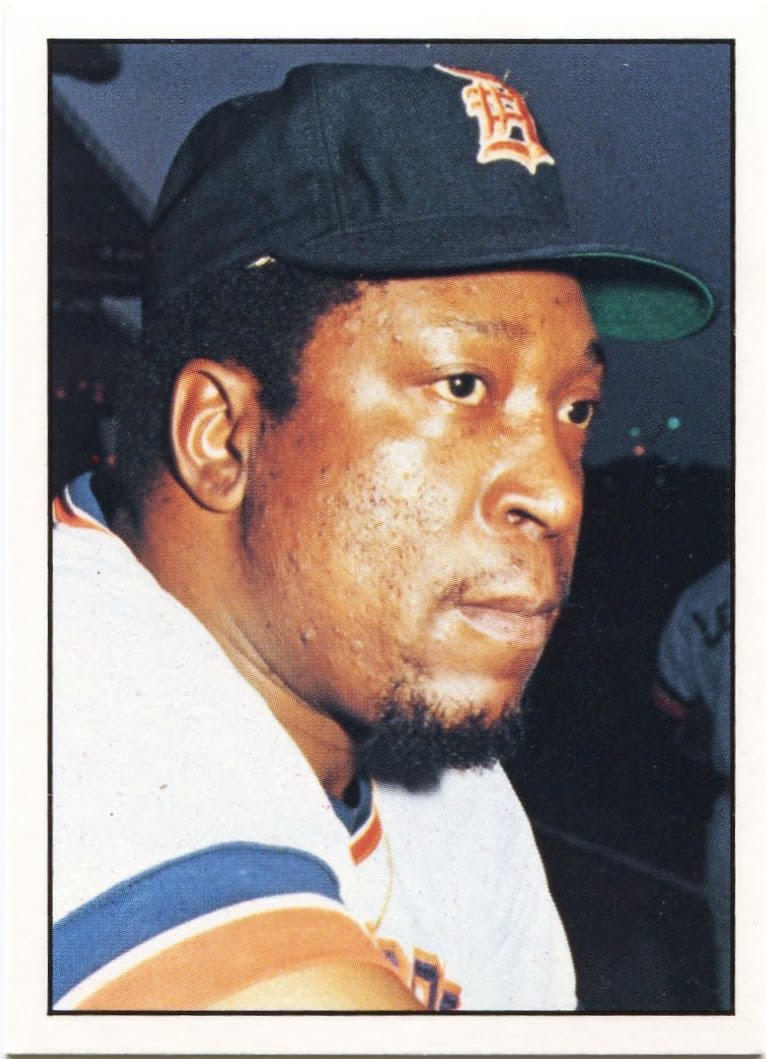 My absolute favorite from this SSPC stack, however, was the very card you see above.

Had my dad not been a fan of his during his childhood collecting days, I'm not sure Gates Brown would own such a prominent place in my collection. Though he was a great pinch-hitter during the later part of his career, he was never a huge name in baseball at the time.

I'd always been a little bugged that Brown never received a true "sunset" card. He played his final 47 games for the 1975 Tigers, yet didn't make the '76 checklist. As a result, Brown's '75 Topps issue was his grand finale.

Until Tom unleashed this piece of cardboard history onto me, I never knew that Brown was in the 1976 SSPC checklist. This, my friends, is what I'd been waiting for. A true Gates Brown "sunset" card.

As if that weren't enough, it looks as though this shot was taken during an actual sunset.

That's about as good as it gets.

To me, SSPC is kind of like a cult movie. With Topps at the forefront of the card market, I doubt it received a ton of recognition at the time. I personally didn't even know about SSPC's existence until way later than I'd like to admit.

These days, though, I think we'd all benefit from owning at least a few cards from this magnificent checklist.

That's a nice Gator, and I'm happy to hear your dad made sure you knew who he was!

Nice write up, Nick. The Cubs were pretty awesome, thanks!

Let me know if you're looking for any more particular players from that set. I don't have a bunch of big names, but there may be a couple of other guys that might catch your attention like Gates Brown did.

Otherwise, I'm going to start slowly dispersing the SSPCs into the blogosphere through trade packages.

That Hargan is awesomely bad.

Awesome cards, especially the Hargan and Gates Brown. A couple of more cards flagged as "wants"... although I'm sure it'll just end up being a set I try to complete.

FYI, that's actually Rick Manning on Duane Kuiper's card. SSPC inadvertently switched the two, so if you want Kuiper's photo, you have to get the Rick Manning card.

Agree, love that Hargan card. Who are the minor leaguers? The Tidewater Tide in particular looks familiar, but I'm not sure who it is.

Love the photography in those sspc cards.

Willie Randolph's '75 Topps RC #592 has him as a Pirate. He's sharing the card w/ three other dudes, but he's still a Pirate!