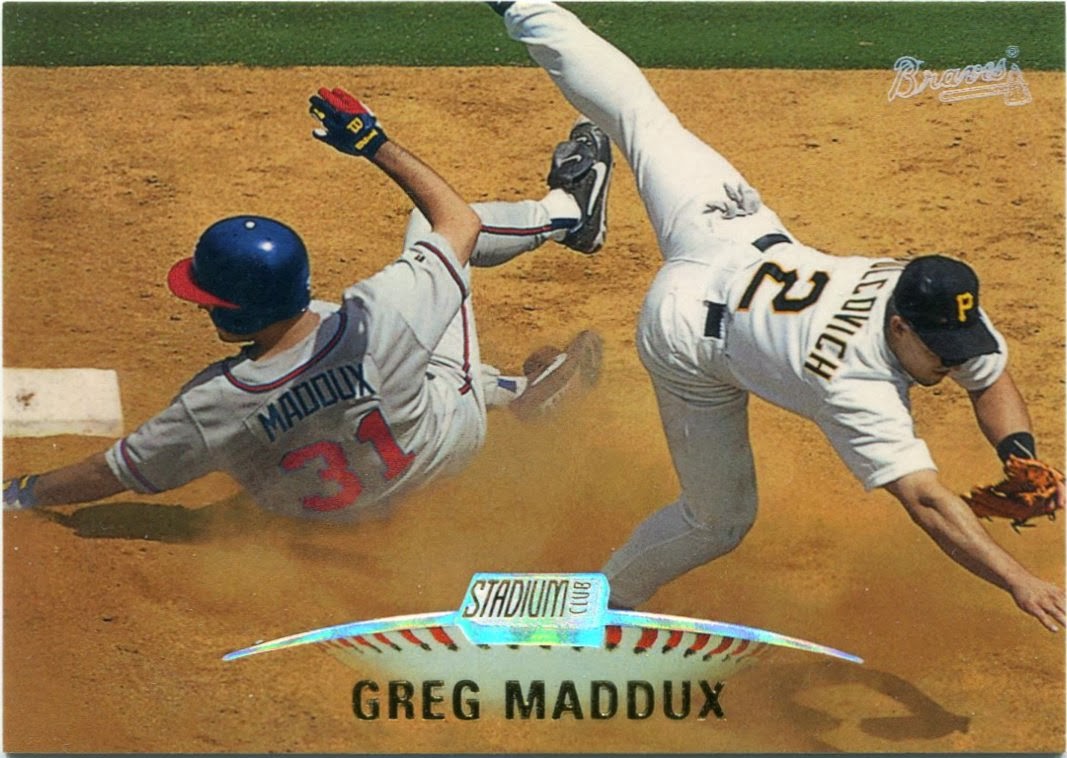 Like it or not, the presence of the "bro" seems to be a card show staple.

I've come to accept that I'll encounter at least a couple bros at every card show occasion. Or, should I say, bro-ccasion.

One bro I overheard was trying to peddle cards of some guy named Puig (it rhymed with "twig" the way he pronounced it) to other sellers, even though the guy was quoted as saying "I think baseball is [bleep]ing boring."

I doubt I'll ever understand the ways of the loud and often-obnoxious bro. I'm just a quiet, soft-spoken type of guy who likes to dig through dime boxes.

I did quite a bit of that on Sunday.

Unless the card has some sort of swatch or scribble on it, I seriously doubt bros even know what a mini-collection is. As for me, I've been collecting "pitchers at the plate/on the basepaths" since I was a young lad.

I'm pretty sure I acquired the chrome version of this spectacular Maddux at one of the first card shows I attended. I couldn't have been older than ten or eleven at the time. It's such a great card, in fact, that I ranked it as one of the "Top 100 Modern Cards" ever produced.

Now, over a decade later, I finally have the standard version of it in my collection.

I probably don't have to tell you how great of a feeling that is. 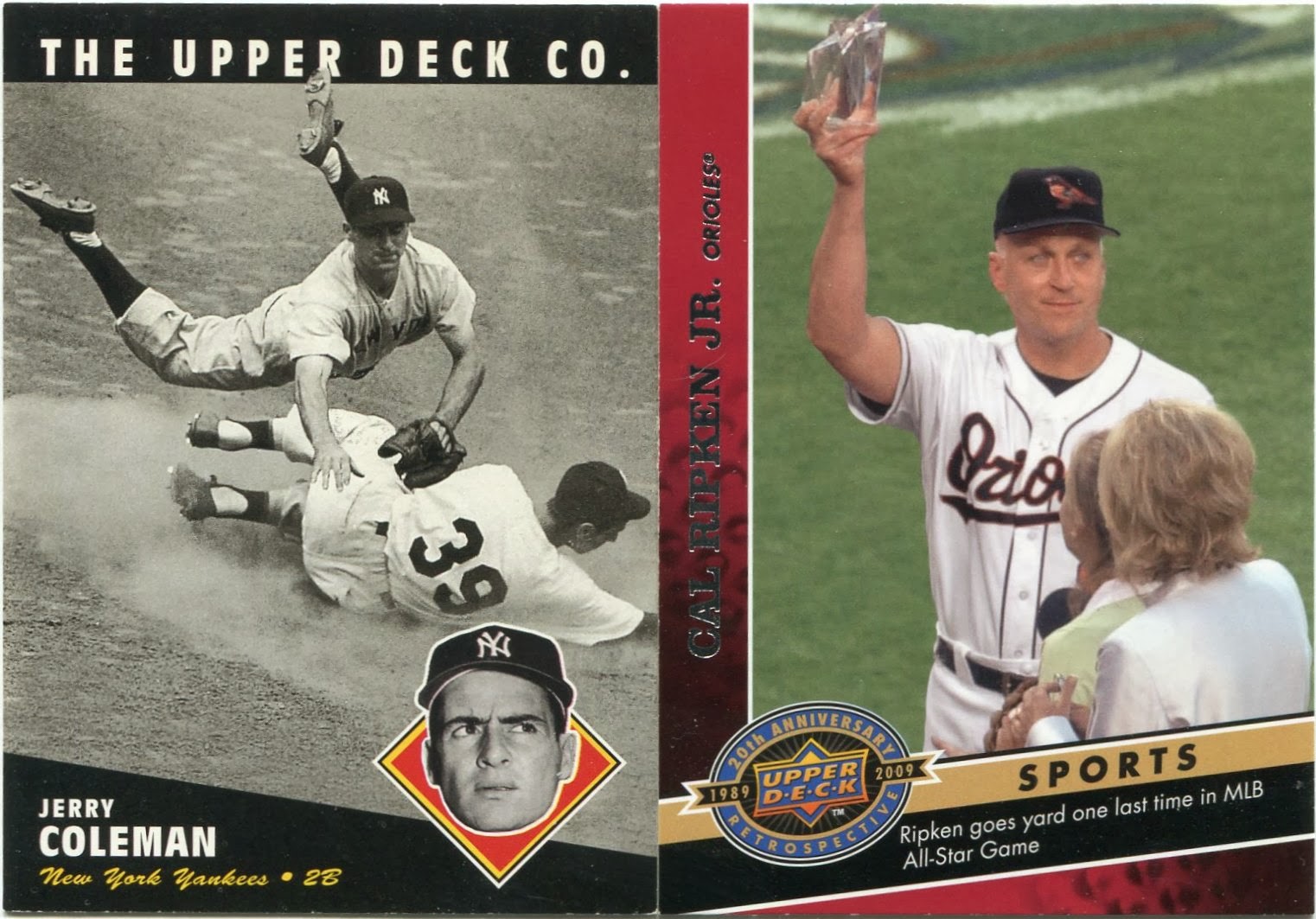 The Maddux was far from the only stellar mini-collection add I found, though.

The late Jerry Coleman was rewarded with a rather ferocious "double dip" shot in the 1994 UD All-Time Heroes checklist. 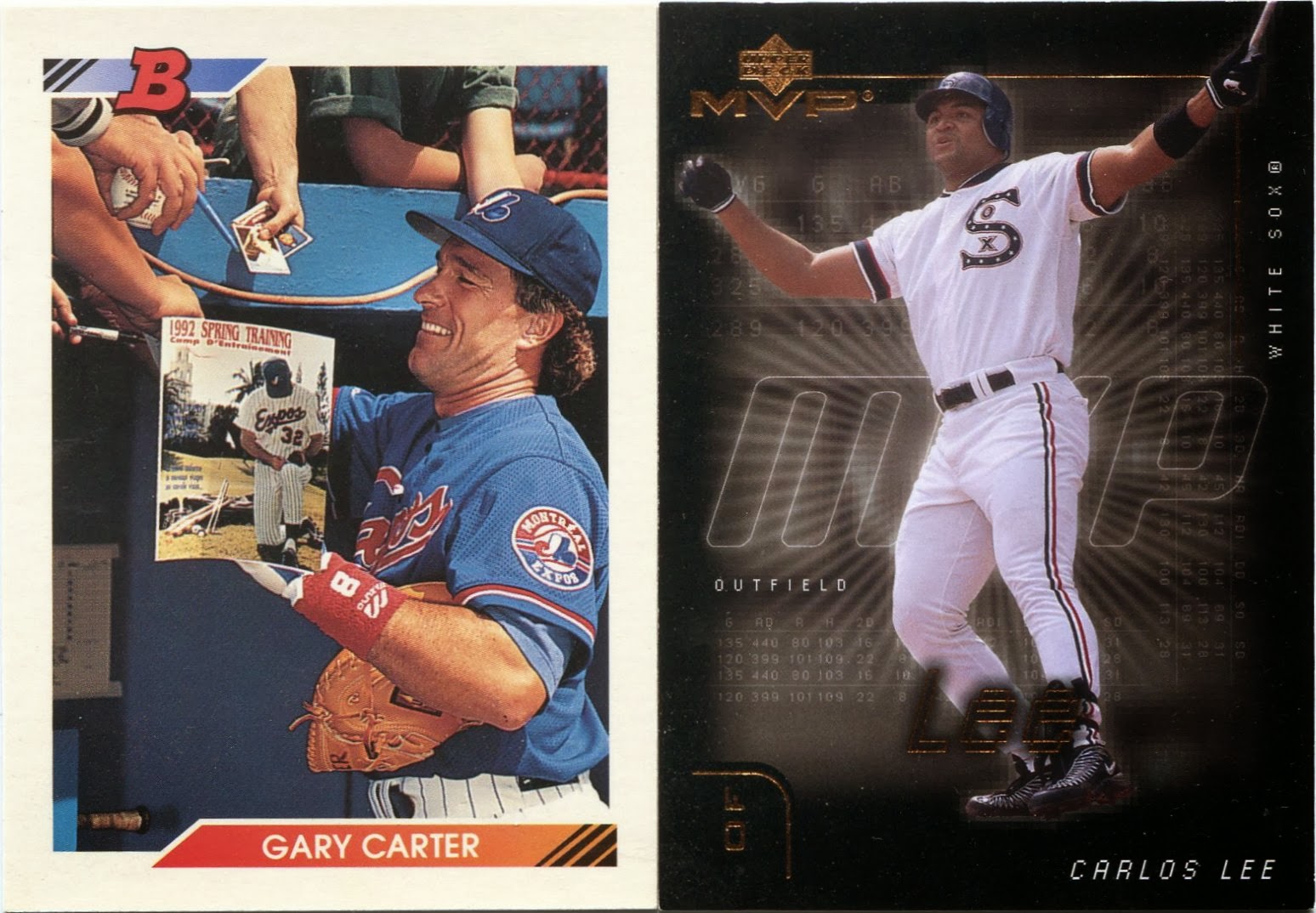 We'll delve further into it in a bit, but one of the vendors had a stack of 1992 Bowman in one of his dime boxes.

That's where I found that awesome "autograph" shot of Gary Carter. That card tells you all you need to know about the kind of person "The Kid" was.

I'm sure most of us would like to forget the 2002 Upper Deck MVP set all together, but even a blind squirrel finds a nut every once in a while.

Design aside, that's a nice throwback on Carlos Lee there. 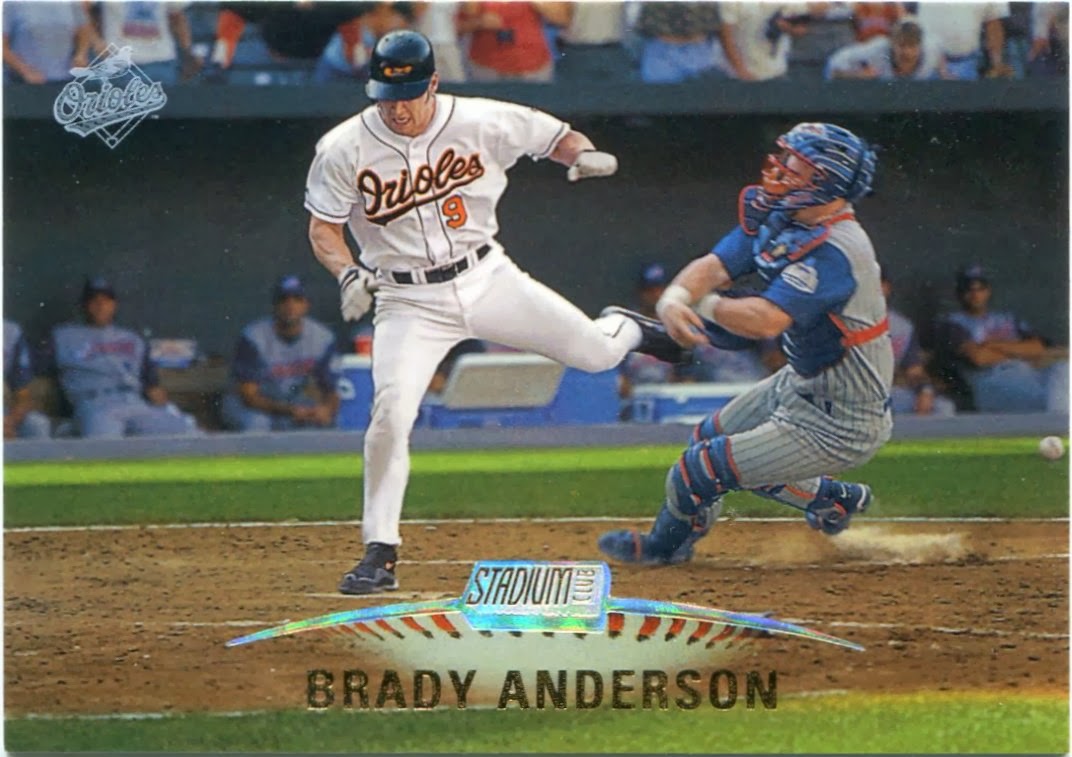 One of my dreams is to find an unopened box of 1990's Stadium Club at a card show on the cheap.

I'm not much of a box buster, but an experience like that would be a ton of fun. Just look at this intense Brady Anderson "play at the plate" shot.

That's something only Stadium Club can offer. 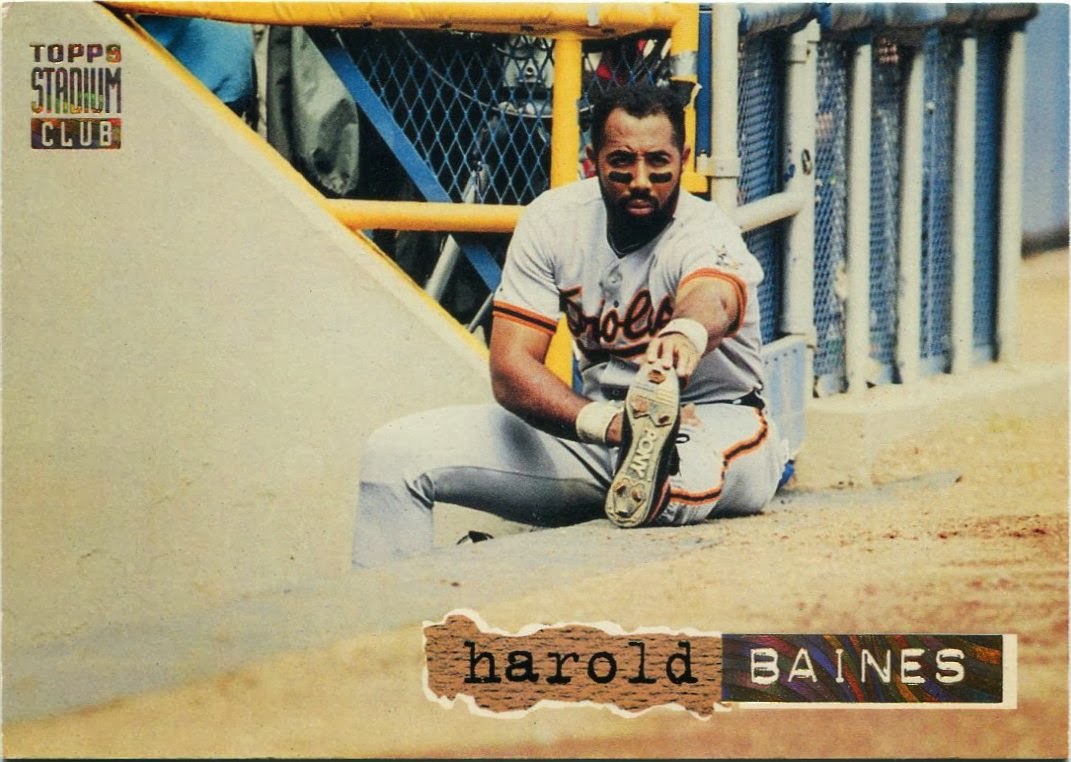 We'll stray away from the mini-collections for now, but I'm not ready to stop gushing over Stadium Club just yet.

This one sure is a beauty. What made finding it for a dime on Sunday even sweeter was the fact that Mr. Baines was actually a part of that lost Just Commons order I discussed not too long ago. 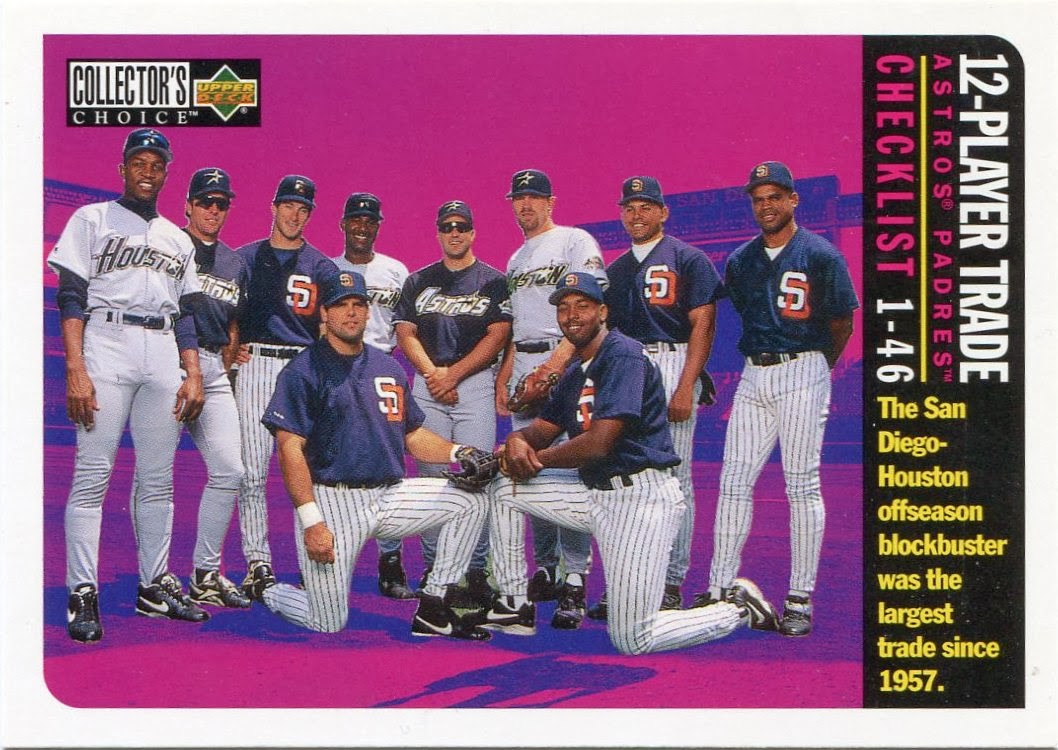 As was this one.

Aside from team cards, I'm not sure I've ever seen so many players squeezed into one frame.

Collector's Choice brilliantly featured a mammoth twelve-player trade between the Astros and Padres in 1994.

That's the type of quirky feat I love seeing documented on cardboard. 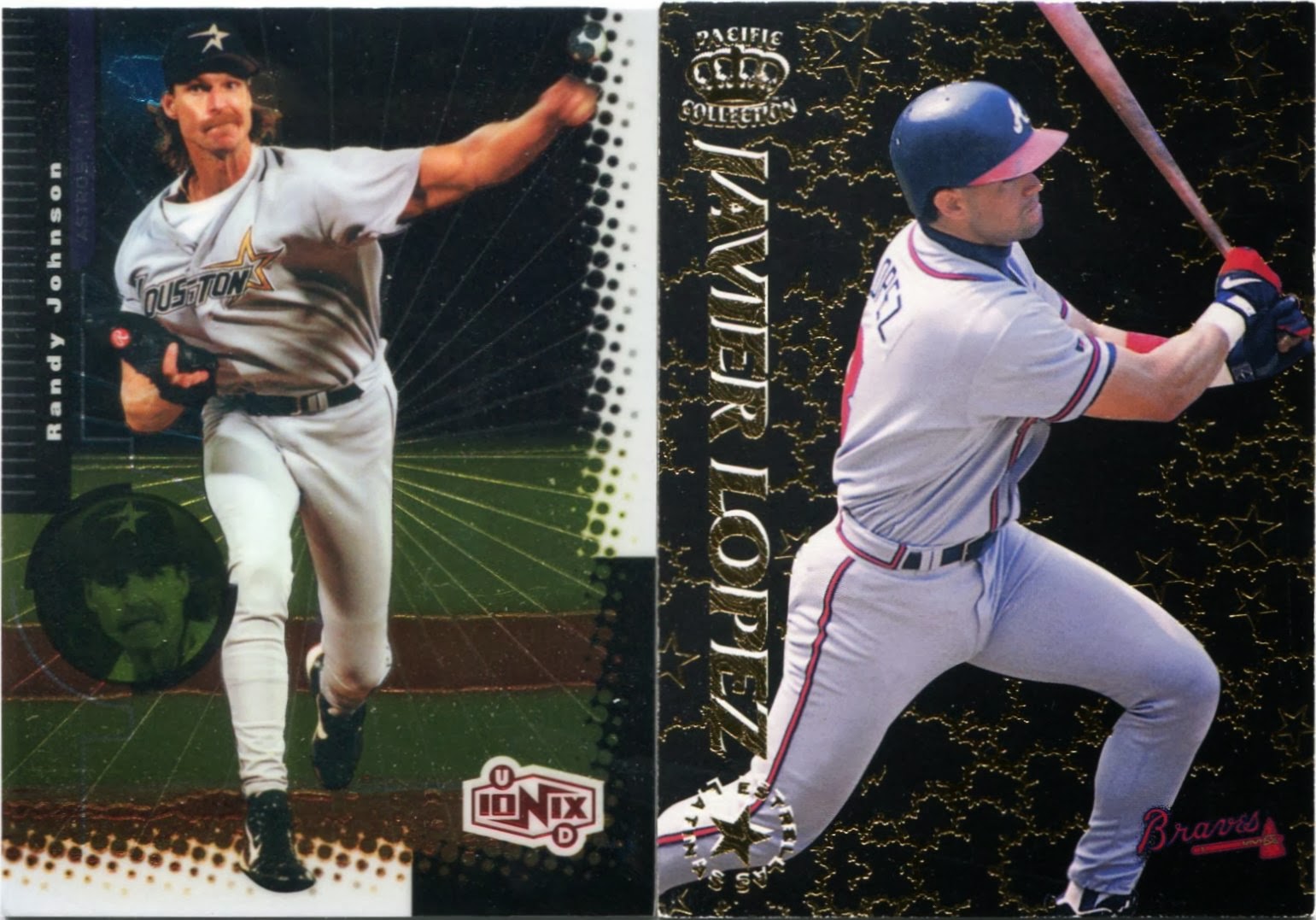 Dime boxes are always good for a few crazy designs from the 1990's.

I doubt Upper Deck's Ionix brand is all that well-remembered here in 2014. 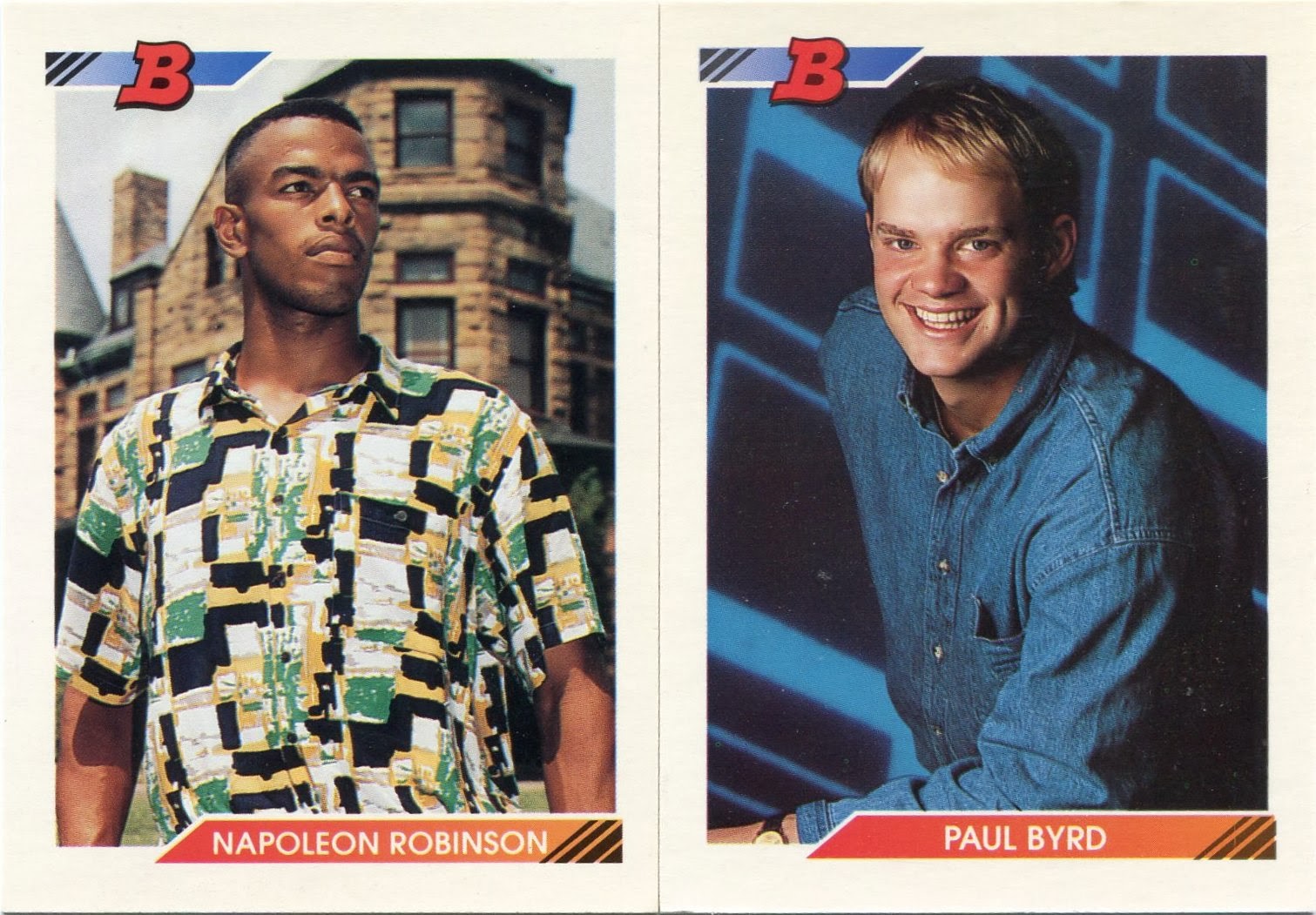 As I mentioned earlier, one vendor had a big stack of 1992 Bowmans available for a dime each.

The set is best known for its stellar crop of rookies, one that included legend like Mike Piazza and Mariano Rivera. What might be forgotten, however, is the fact that it included a lot of flame-outs like Napoleon Robinson as well.

And, for whatever reason, the people in charge of Bowman made a lot of the bright-eyed rookies don horrendous outfits for their photo shoots.

I'm sure Paul Byrd looks back on his rookie with a great deal of embarrassment. 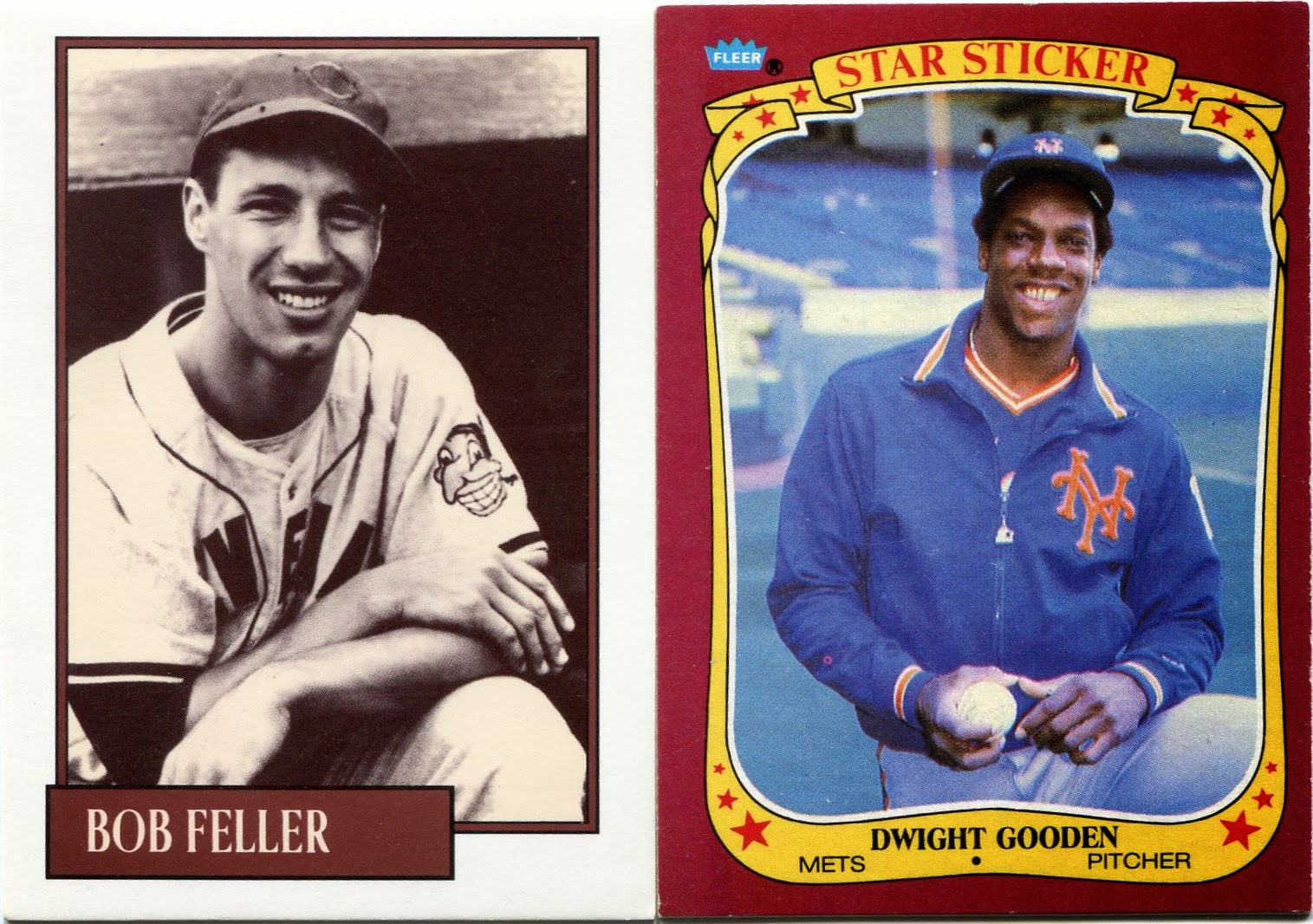 Oddballs are almost an inevitable part of dime box digs.

If you look hard enough, you're bound to find at least a few.

I struck oddball gold with these two. 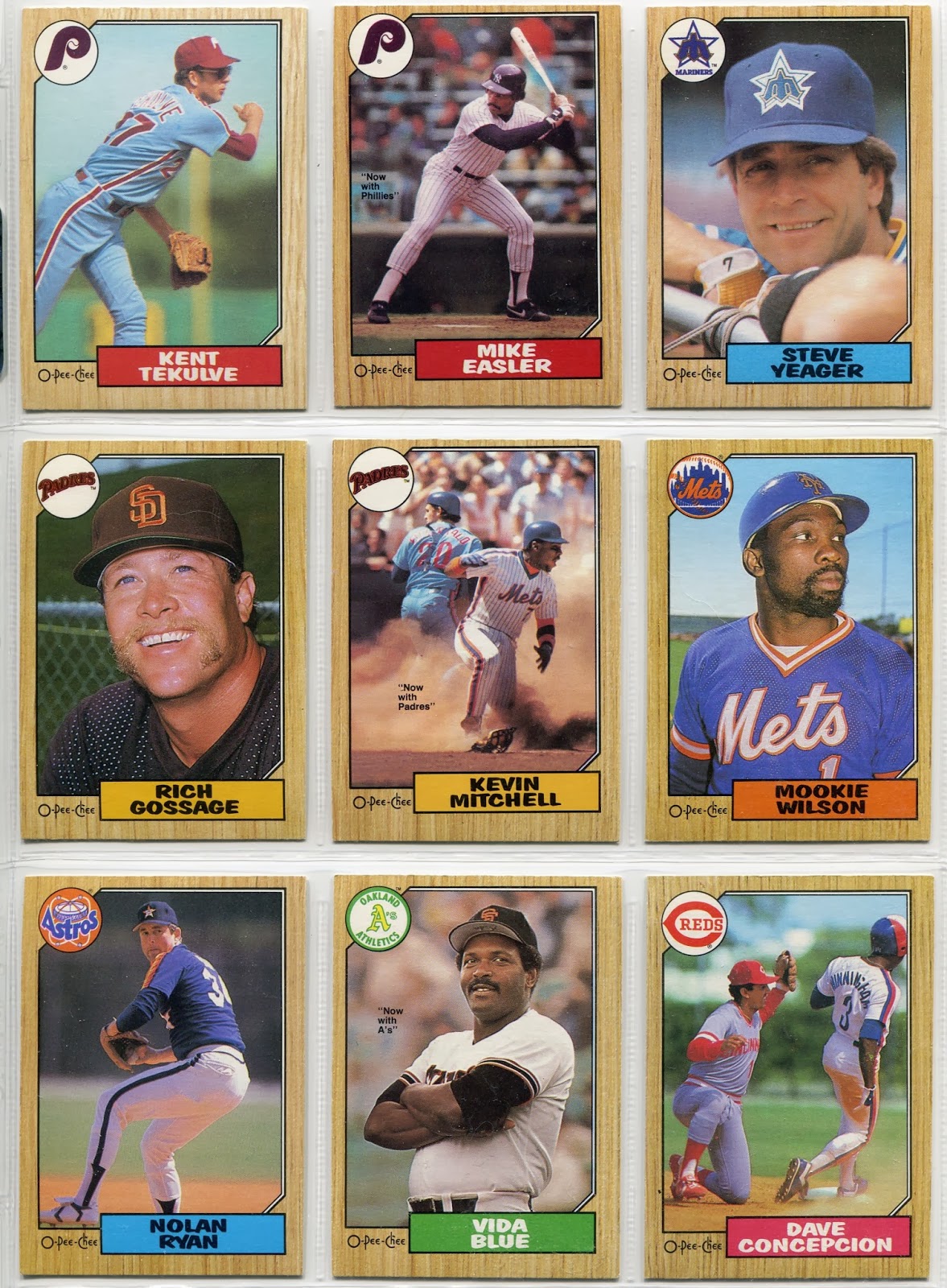 Sometimes, if you're lucky, you'll find a guy with a whole stack of oddballs ripe for the picking.

One vendor had an ample amount of '87 OPCs available at just a dime a piece. At that price, I'm definitely in the O-Pee-Chee market.

Perhaps the most interesting of this bunch is the Vida Blue in the bottom-center. After spending the '86 season with the Giants, Blue attempted to latch on with the A's the following season. His comeback fell short and he never pitched in another big league game after 1986.

His '87 OPC issue is the only card I've seen that acknowledges his short-lived second stint with the A's. 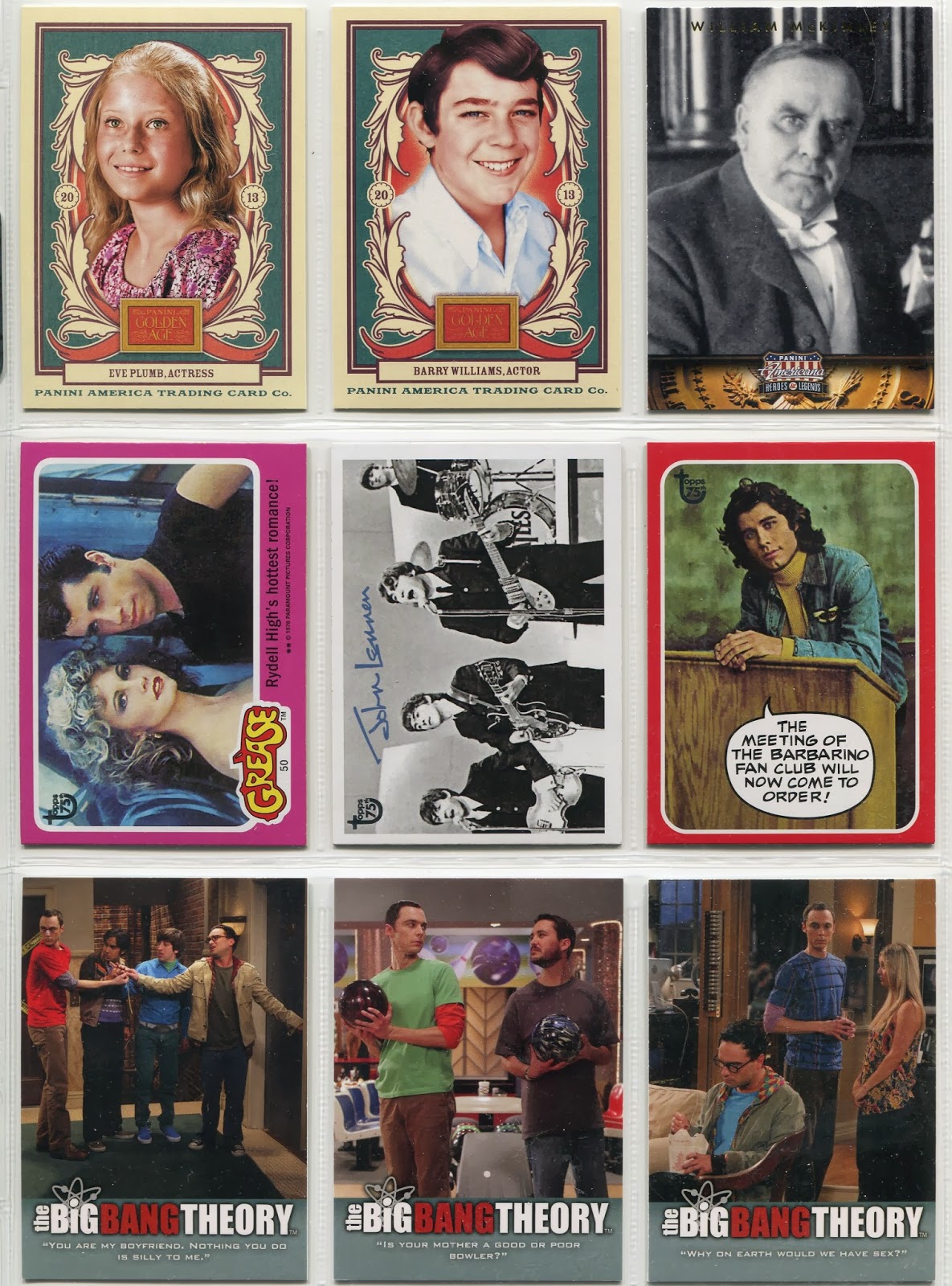 And now for something completely different, here's a page of non-sports oddities I picked up on Sunday.

One of the last vendors I visited had an entire dime box of non-sports singles on display. Most collectors would probably pass up something like that without a second thought, but not me. I dug in with a great deal of excitement.

I scored a few new Golden Age singles, including ones of Jan and Greg from The Brady Bunch. I also landed a couple dozen new additions to my presidents collection, courtesy of Panini Americana.

Also present were a couple huge stacks of the overlooked Topps 75th Anniversary series that was released late last year. The checklist features reprints from various trading card sets that Topps released during its history. Everything from Grease, Welcome Back, Kotter, and (most importantly) The Beatles made an appearance.

This guy even had a few Big Bang Theory cards in his dime box. If you think I'm crazy for picking those up, I'm not.

My mother had me tested. 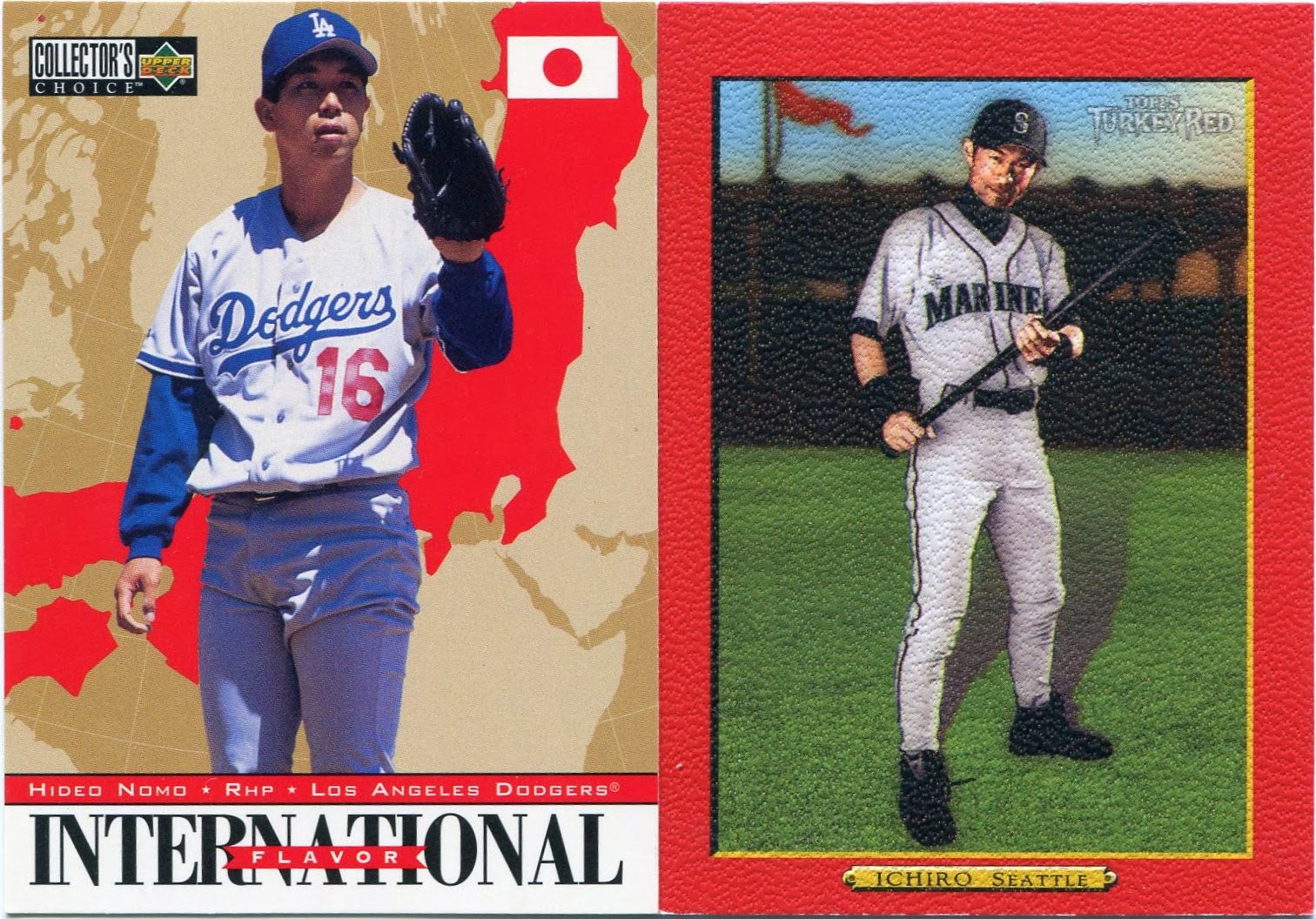 Let's get back to baseball for now.

At just a dime each, I wasn't about to let these Japanese heroes go. 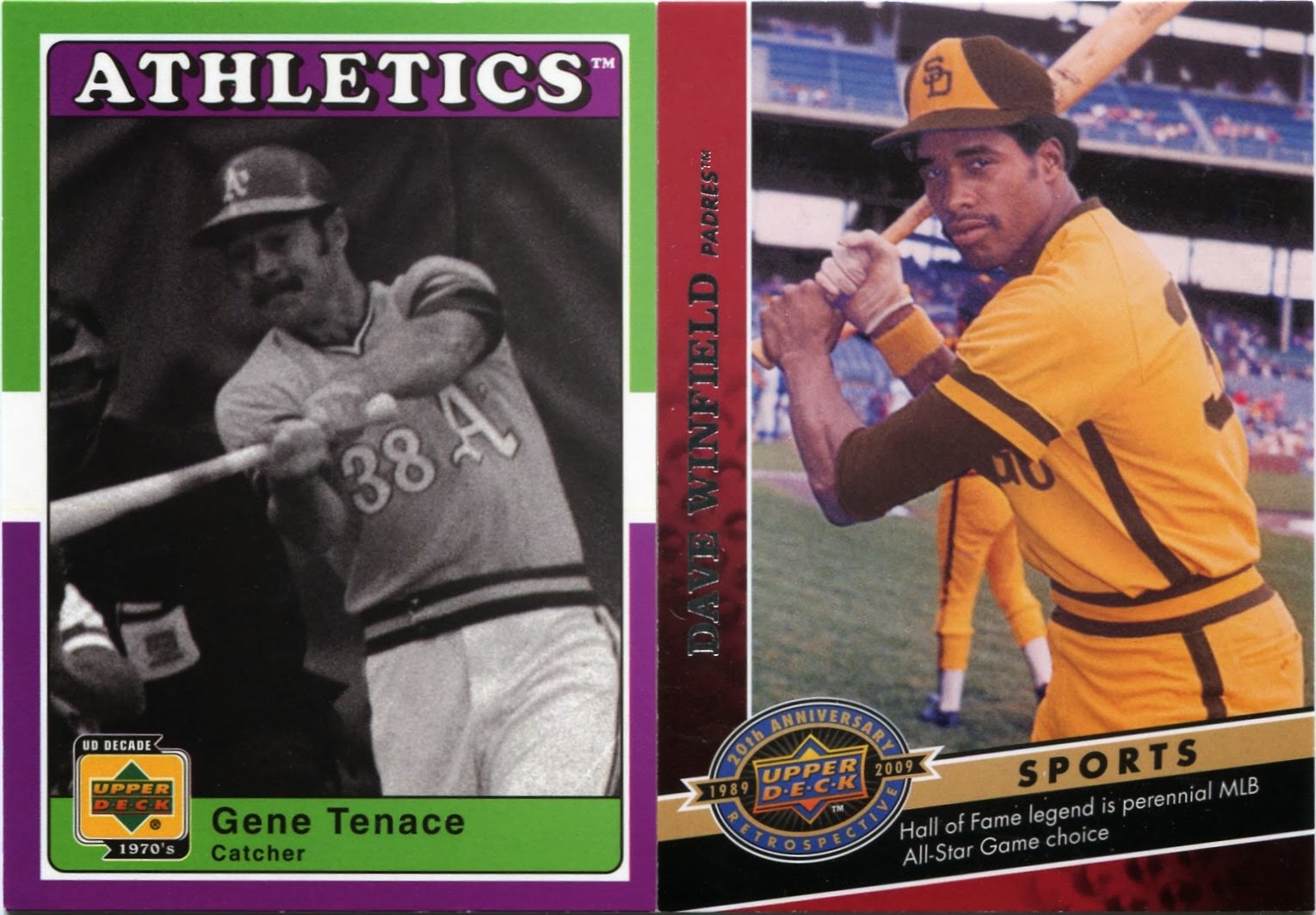 I don't think I've ever seen a photo of Dave Winfield in those awful mustard-yellow Padres uniforms from the early '70s.

They don't suit him. One vendor had at mammoth array of least a dozen or so 5000-count dime boxes on display.

Though he had cards from past years, such as the 2001 UD Decade Tenace I just showed, the vast majority of his singles were from more recent releases.

It's vendors like these that save me a ton of money. Instead of dropping three bucks on a four-card pack of Topps Chrome, I picked up a total of 50 singles from the set for a whopping five bucks. I also unearthed a couple dozen 2013 Pinnacles I needed as well.

This guy also had some from the recent Panini Select brand as well. I'm not a big fan of the design, but I can't pass up a card of "The Beard" for a dime. Shiny beauties from sets like Topps Tribute World Baseball Classic and Bowman Platinum were fair game for a dime as well.

Jeff knows this vendor well from his past trips to this card show. When I met up with him, he said that he'd found a few short-prints from the guy's dime boxes before.

It was funny he mentioned that... 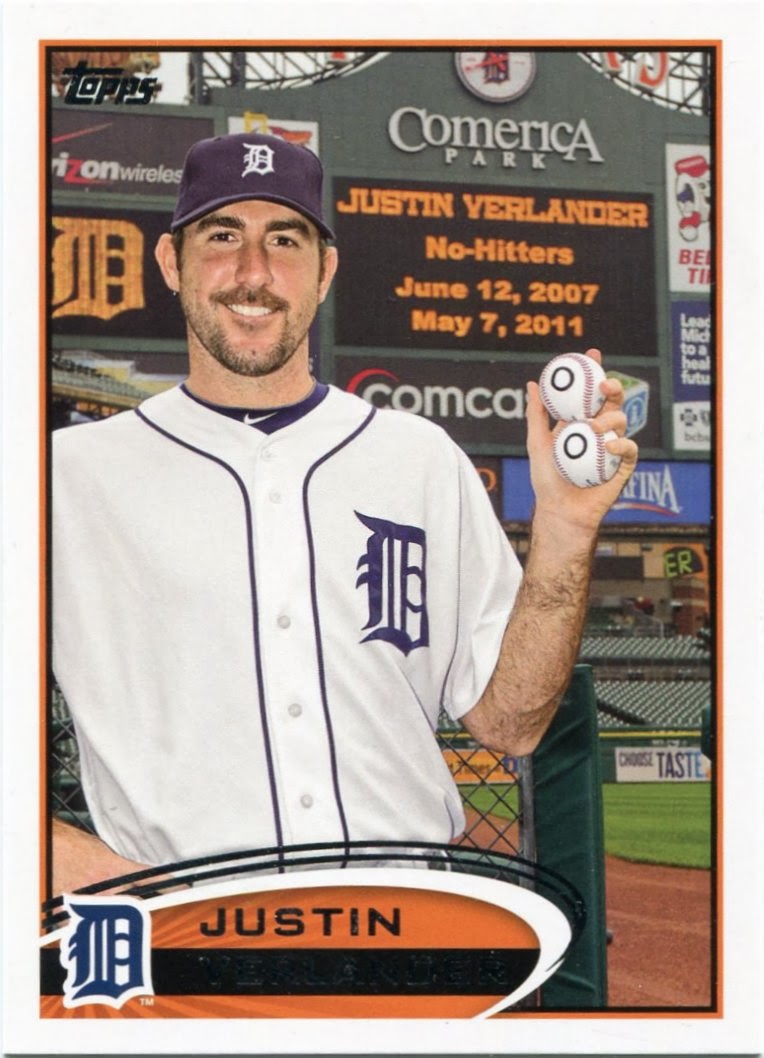 ...because I was just about to tell Jeff about my short-print successes from the guy's bargain bins.

These photo-variation SPs are usually a bit too rich for my blood, but I've always had a feeling I'd find a few overlooked ones in a dime box one day.

As it turned out, that day was Sunday.

Whether it was due to a lack of knowledge or effort, this vendor dropped this sweet Justin Verlander short-print into his dime boxes, one that chronicles his two career no-hitters.

Just the one would've been more than enough. 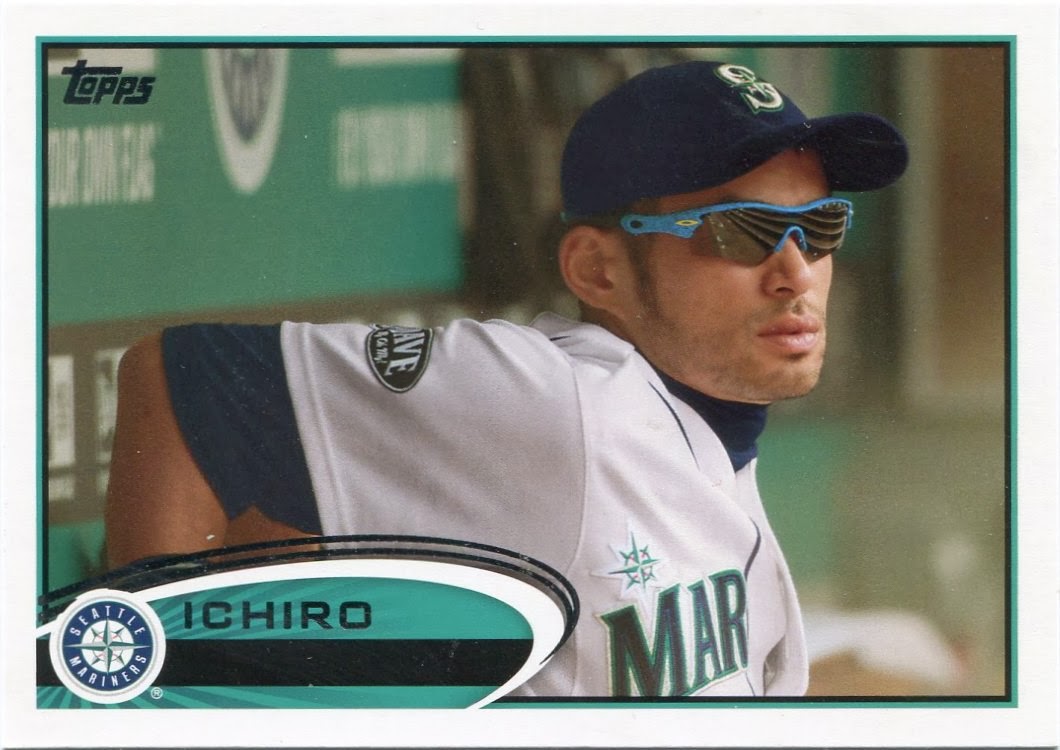 As I found, though, there was a second short-print waiting for me as well.

And it just so happened to feature Ichiro, the man behind one of my most prominent player collections.

I'm partial to dugout-centric shots like this one. Ichiro seems to be sporting some mighty fine shades here as well.

I don't think there's any denying that this was my dime box find of the day.

Even the bros would be proud.
Posted by Nick at 6:08 PM

Dude, bro, I'm honored to be the first comment on this astounding post. Man, I've never seen those Maddux or Anderson TSC cards before, but...WOW!!! Two of the most brilliant cards ever made, for sure. And, congrats on those amazing Topps SP finds. Especially cool that you found your boy Ichiro. You kicked butt at that show, bro!

With you on that Winfield. Dig the early shot.

I see your Sheldon Cooper joke right there Nick.

Those are great finds! I love the Gary Carter card -- he was one of the kindest, nicest guys in baseball in the 1980s.

Nice pickups on those SP's!

You had a great show