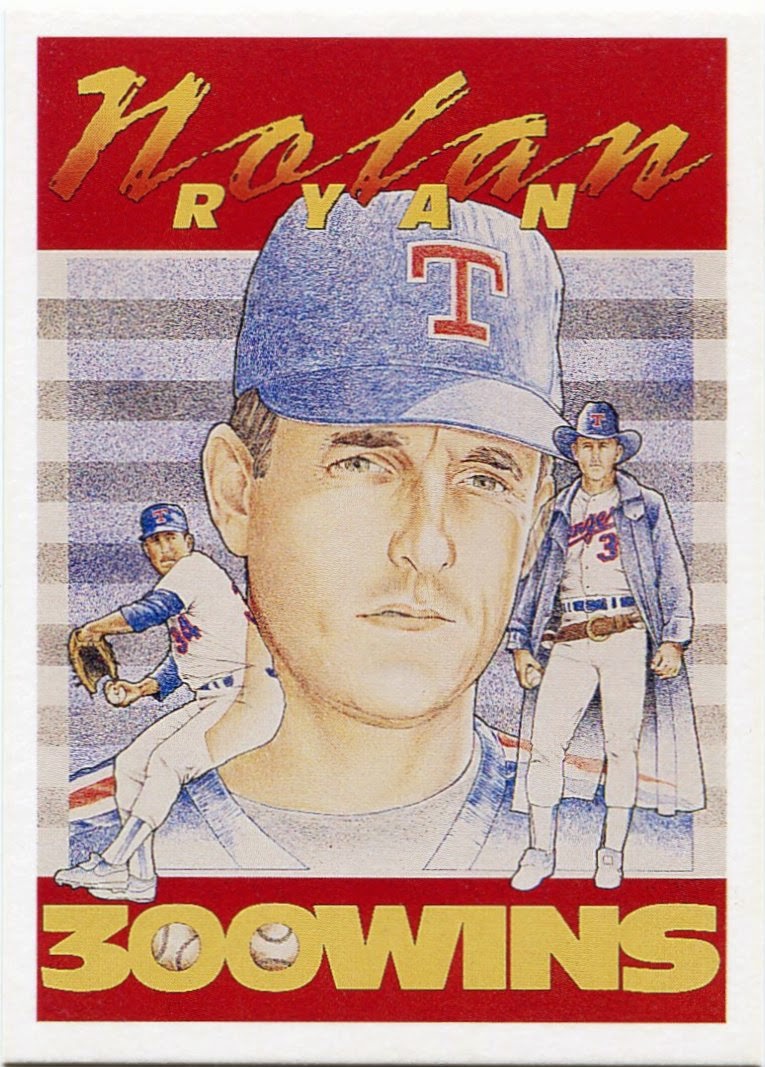 In case you missed yesterday's post, I recently fell victim to another cardboard addiction.

If the title of this blog is any indication, bargain hunting is one of my favorite activities. Yet, up until fairly recently, I hadn't given virtual bargain hunting a shot.

Within the last month, however, I've scored a ton of awesome cards scouring through cheaply-priced auctions on Ebay. So many, in fact, that I had to split my recap into two posts.

Tonight, we'll get into the second half of my virtual bargain hunting, including the pair of cards that shocked me the most.

We start off, however, in the vast world of oddballs. With Hostess, Drake's, and others of the like, some oddities are fairly well-known. If you delve a little deeper, though, you might turn up a few items from what I like to call the black market of oddballs.

There are some cards that have absolutely no information on them. They might have been created in someone's basement for all I know. This triple-image Nolan Ryan is one of those. I can only assume that it was issued around 1990, as that's when "The Ryan Express" picked up his 300th win.

Sometimes, these mysterious pieces can be the best kinds of oddballs. That's why I didn't mind dropping 76 cents on this strange card.

I doubt I'll ever see another one. 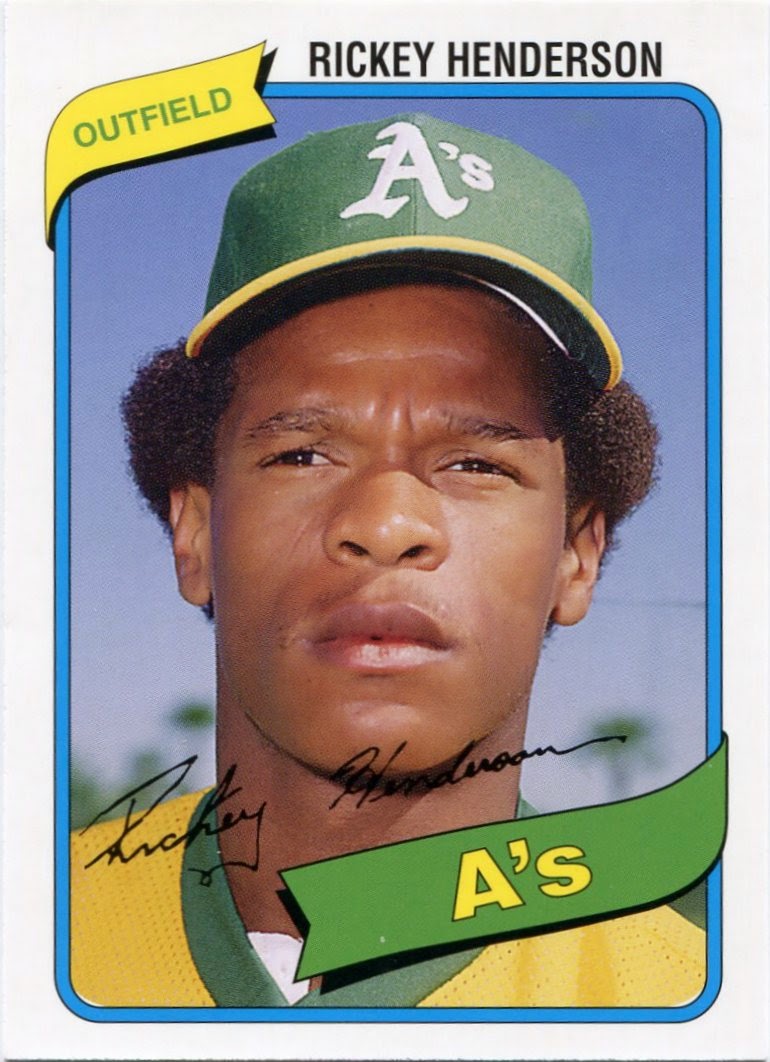 This neat shot of a young Rickey Henderson comes from the 2006 Topps "Rookie of the Week" insert set, one I discussed not too long ago.

I'm proud to own an authentic copy of Rickey's 1980 Topps rookie card. This one will sure look terrific next to it in my A's binder.

Not a bad pickup for 41 cents. 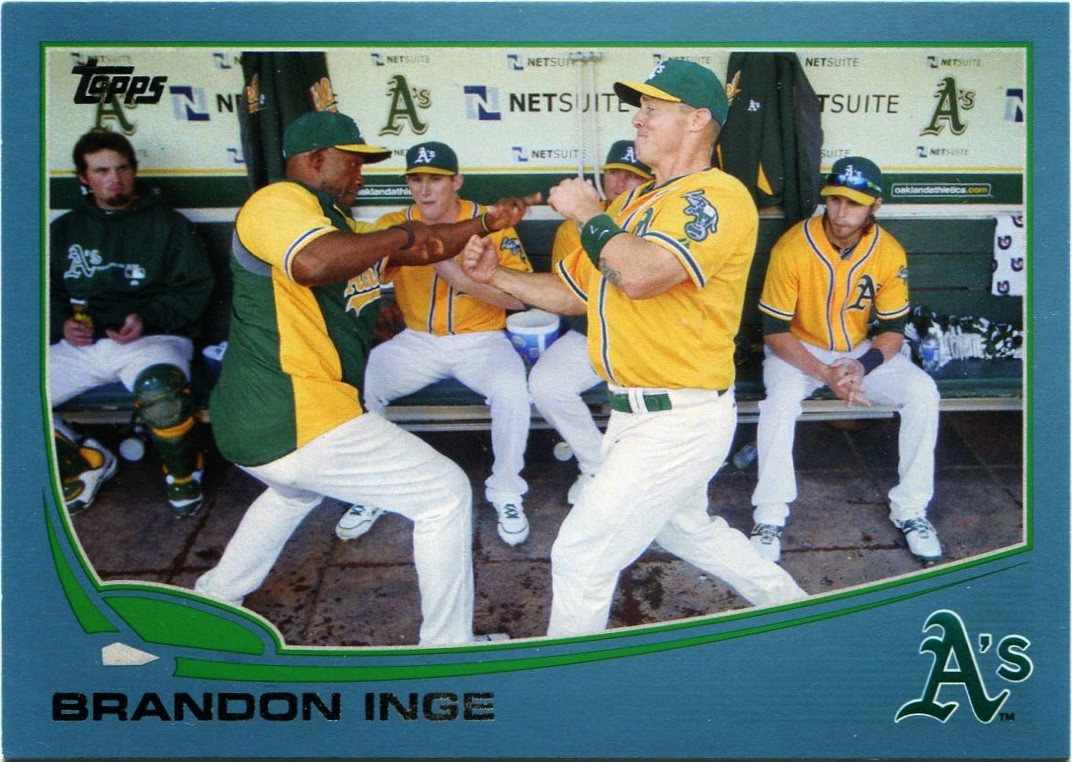 If you're a fan of parallels, then virtual bargain hunting may just be for you.

A lot of sellers seemed to be eager to unload them at cheap prices. It is an unofficial quest of mine to build a 2013 Topps Brandon Inge rainbow. It's one of my favorite cards of the last five years.

I managed to check this Wally World blue parallel off the list for a mere 39 cents. 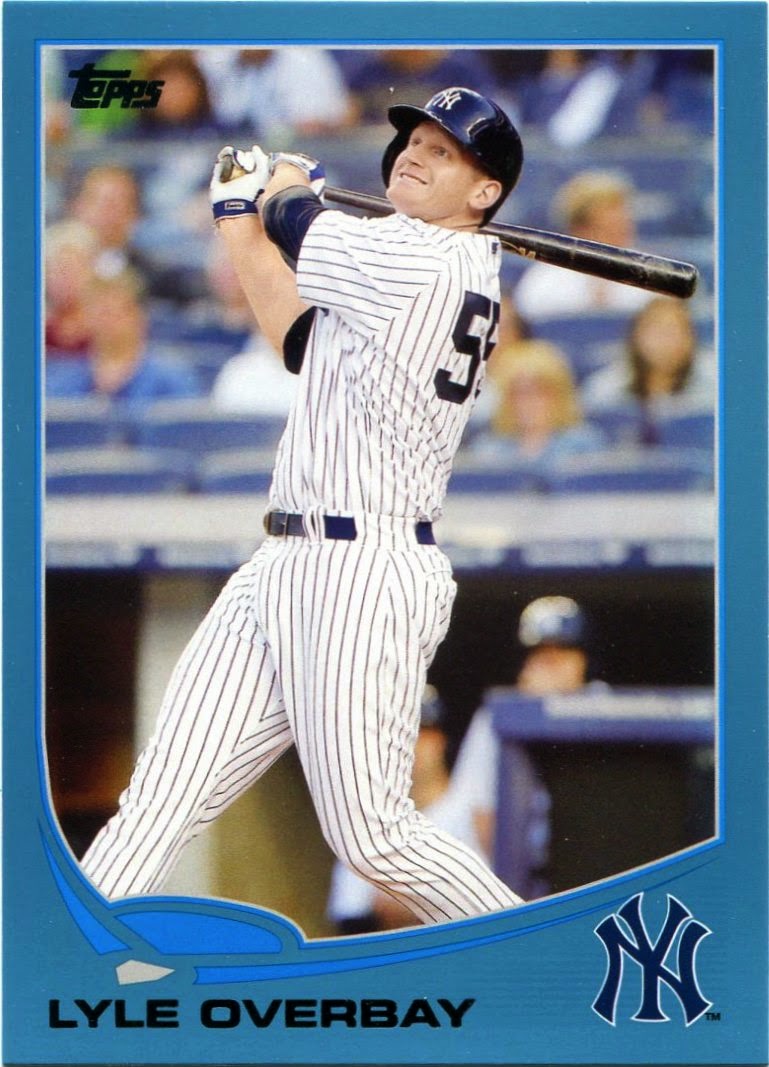 Some of you might be surprised to learn that Lyle Overbay is still kicking around with the Brewers in 2014.

He actually had a decent season with the Yankees last year, although this 2013 Topps Update single is all he had to show for it in the world of cardboard.

I was happy to plunk down 35 cents for such a beautiful blue parallel. 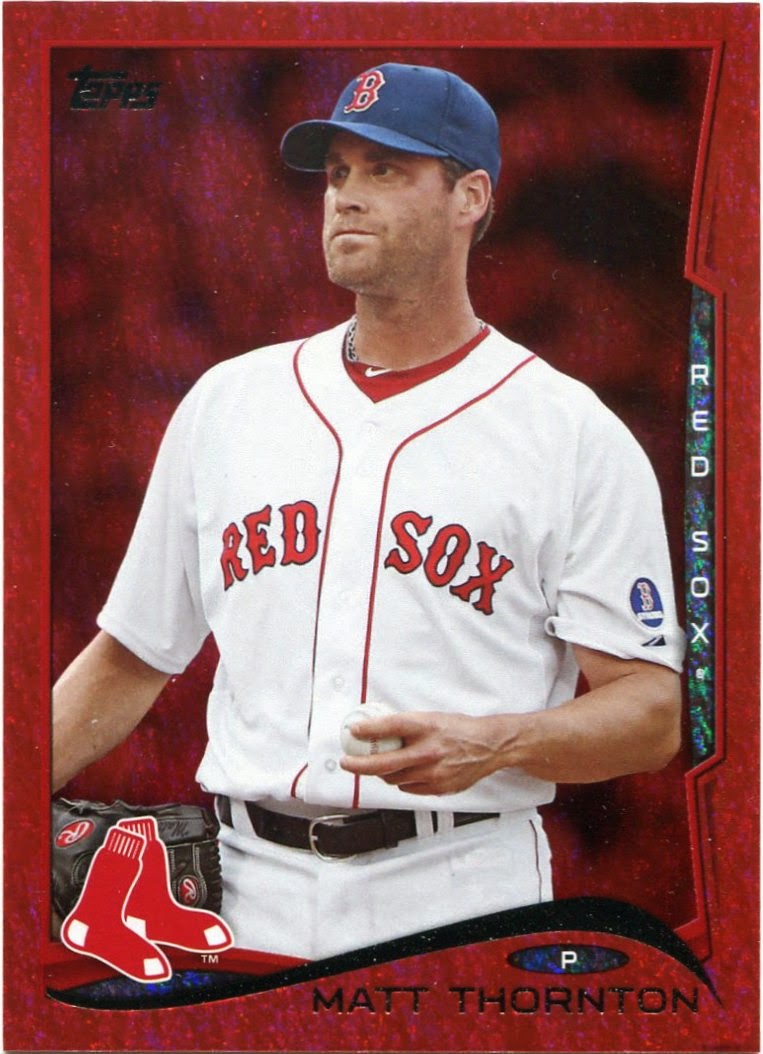 Matt Thornton spent part of 2013 with the Red Sox before jumping to the Yankees this offseason.

I've heard other bloggers dub these as "blood rain" parallels. It's a terrific and appropriate label, although I will say it looks rather nice on Red Sox cards.

"Blood rain" or not, I found this copy for just 55 cents. 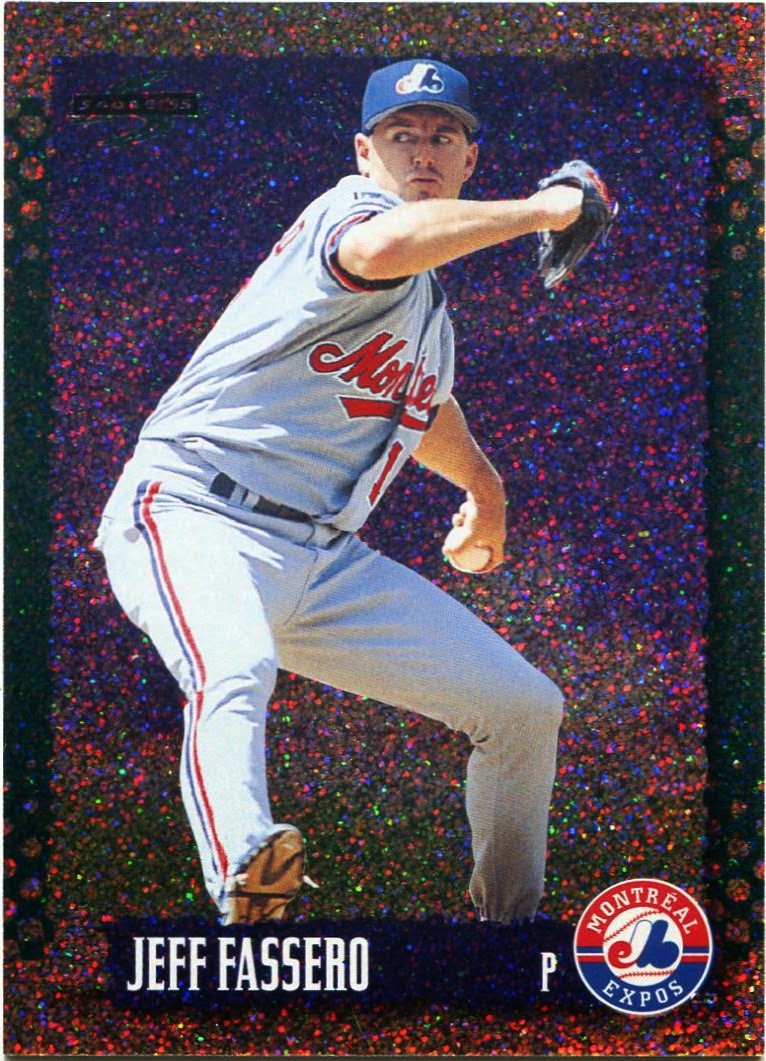 My virtual bargain hunting opened me up to parallels that I didn't even know existed in the first place.

Apparently, Score had some sort of main-in redemption program for these Platinum parallels back in 1995. I can assure you, these are about twenty times more awesome and sparkly in person.

For 26 cents, I'll definitely take that. 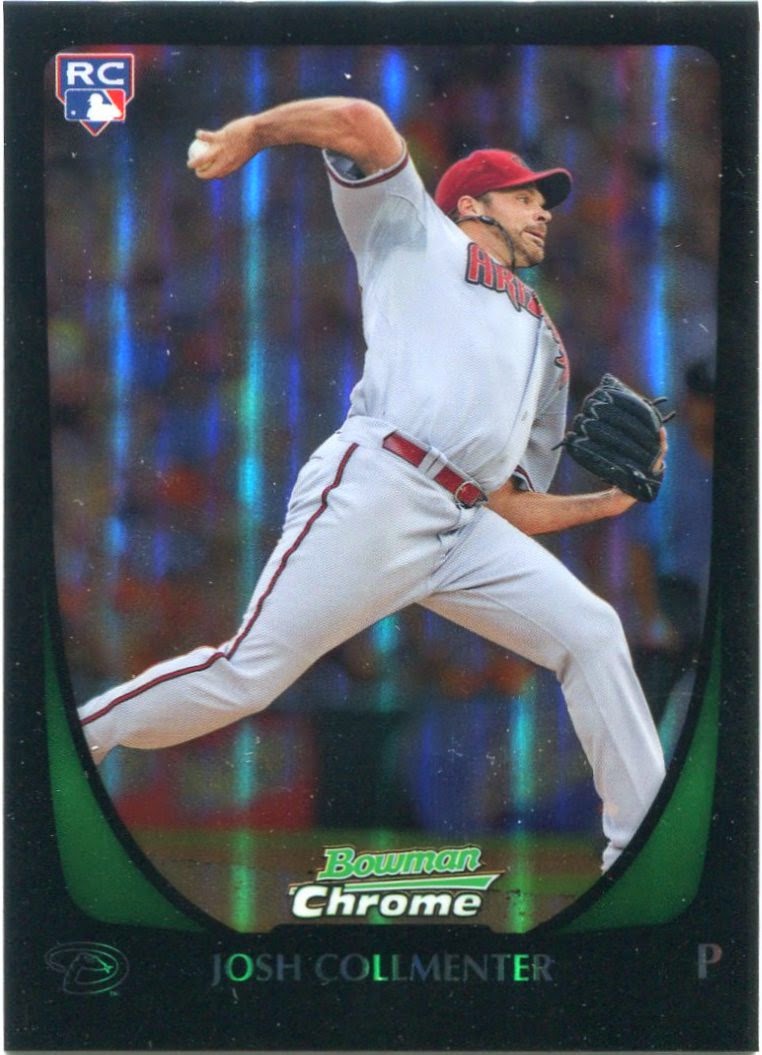 Josh Collmenter was in the news recently for his complete-game shutout against the Reds last week.

I've long been a fan of his for his unorthodox "tomahawk" delivery, which is why I picked up this rookie refractor of his not long before that gem.

I probably could've turned it around for a small profit after his shutout, but I'm not that type of collector. 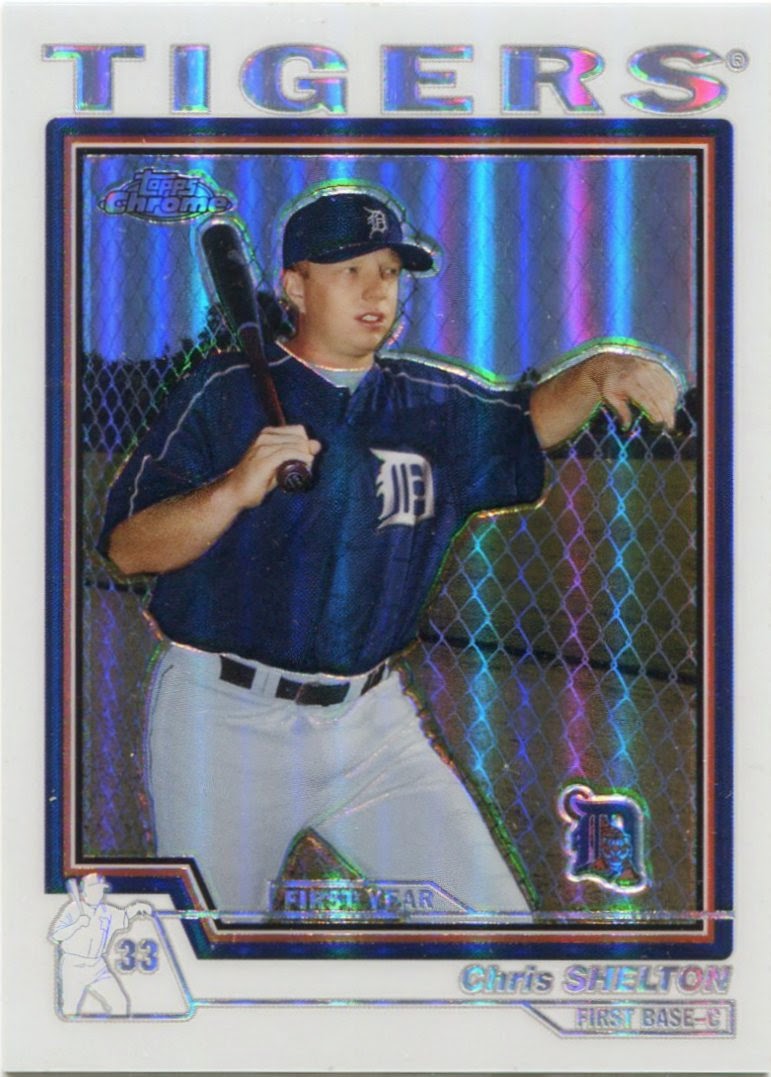 Chris Shelton has become one of the unofficial faces of this blog. For about a month in 2006, he was the talk of the baseball world. He hit nine homers in April of that season, setting the league on fire.

Previously ignored rookie cards of his were going for big money. Predictably, Shelton faded into obscurity after that. I've always remembered that little stretch way back when and have become perhaps the only Chris Shelton collector on the face of the planet as a result.

Back in April of 2006, this rookie refractor was fetching good money.

Here, more than eight years later, I picked it up for a meager 11 cents. 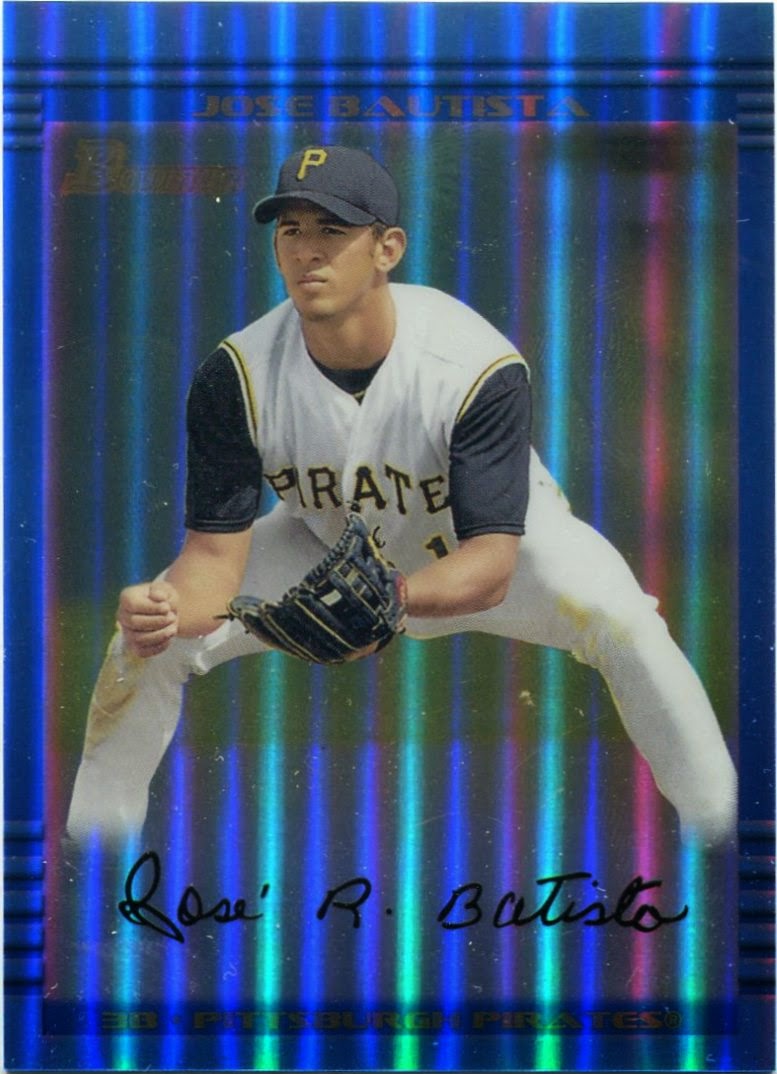 Because of my apathy towards Bowman Chrome, I completely missed out on these Blue Sapphire rookie reprints from last year.

I'm still not a fan of the brand, but these are really nice. Unlike a lot of other Bowman cards, however, they don't go for big bucks.

I snagged this Jose Bautista reprint for a quarter. 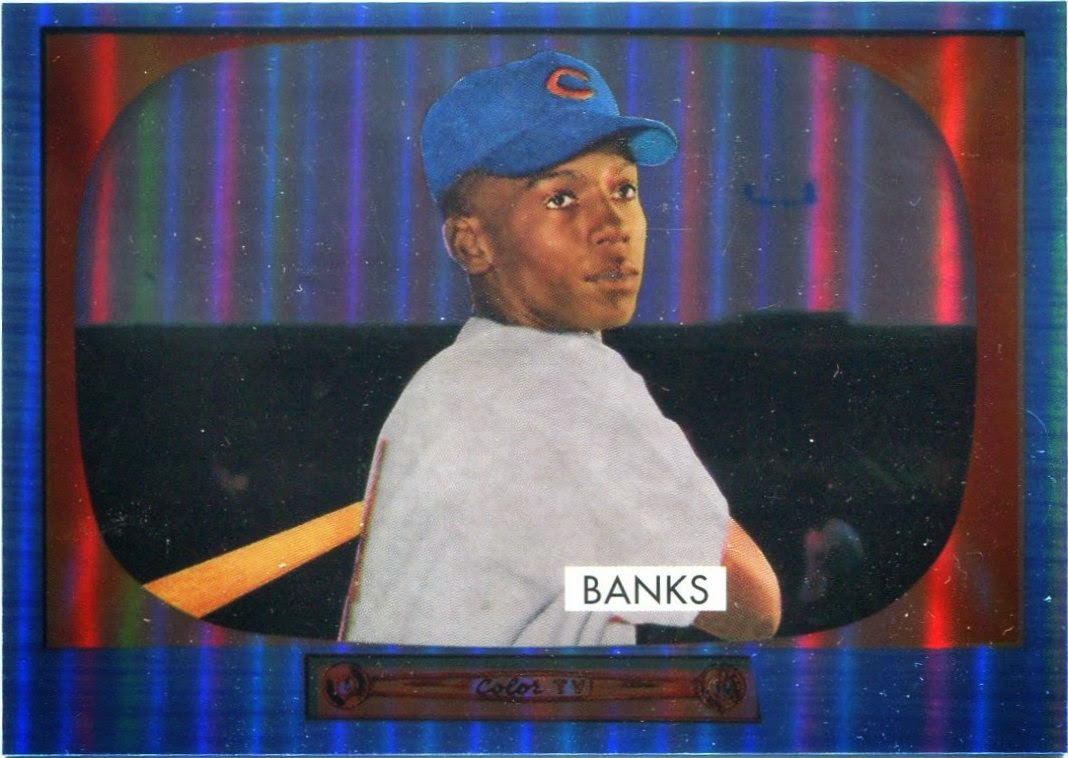 Understandably, Hall of Famers command a bit of a premium.

This Blue Sapphire reprint of "Mr. Cub" set me back a whole dollar. 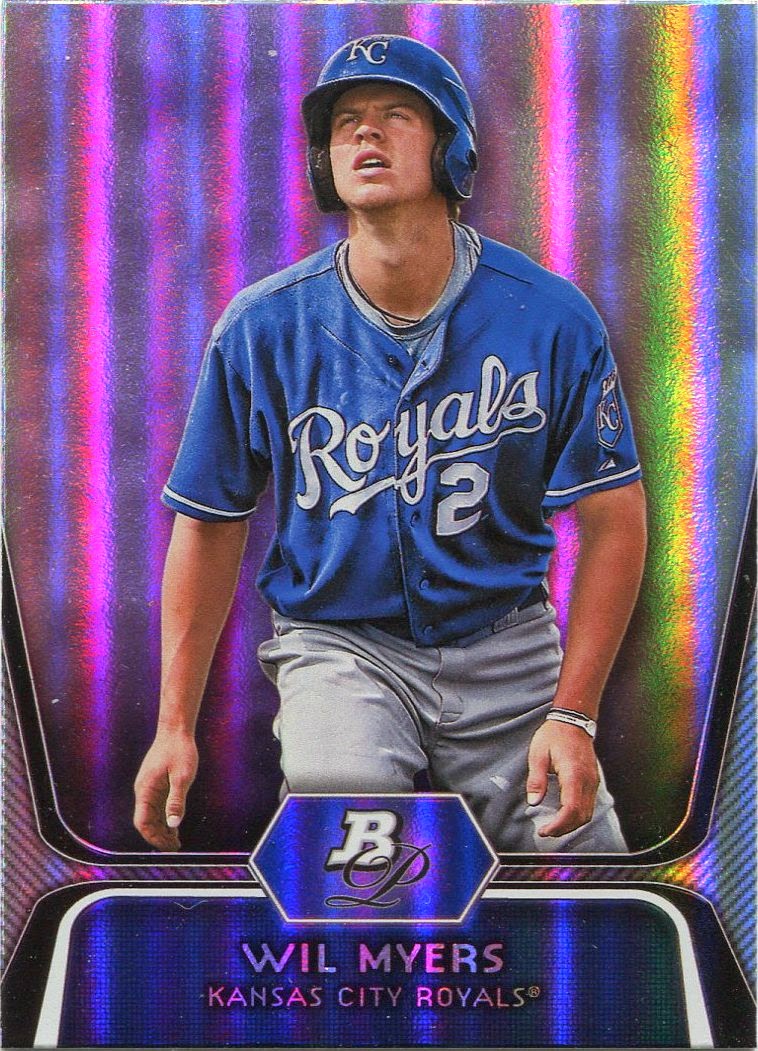 We're starting to get into the high-dollar virtual bargains.

Though he's currently on the shelf with a fractured wrist, Wil Myers looks to be one of the game's bright young stars. As if I needed more incentive to collect him, the man is featured on quite a few "zero-year" cards as well.

Before he played in a single game for the Royals, Myers was famously dealt to the Rays before the 2013 season in the trade that brought James Shields to Kansas City.

This is my first card of him as a Royal.

Though I'm ecstatic to have it in my collection, I don't think Mr. Myers can hold a candle to my two other $1.50 buys. 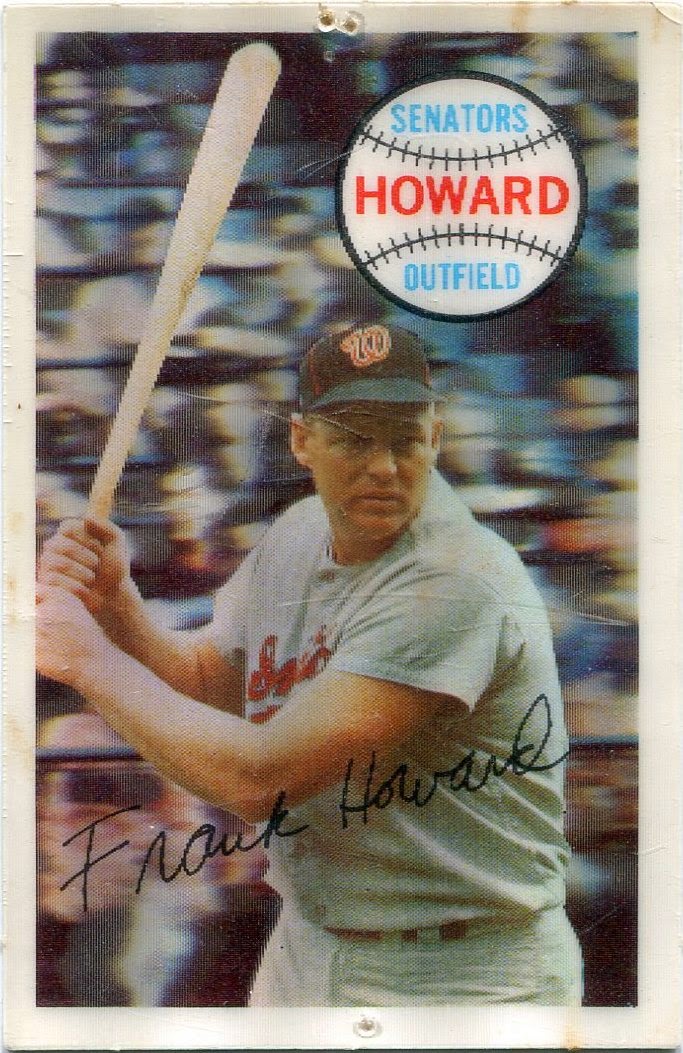 I was shocked when I came across this one during my virtual bargain hunting.

I wasn't expecting vintage to be part of the experience. Because the bid was fairly low when I found it, I threw out a bid of a buck-fiifty on Mr. Howard here.

After that, I did a quick dig through the seller's other auctions... 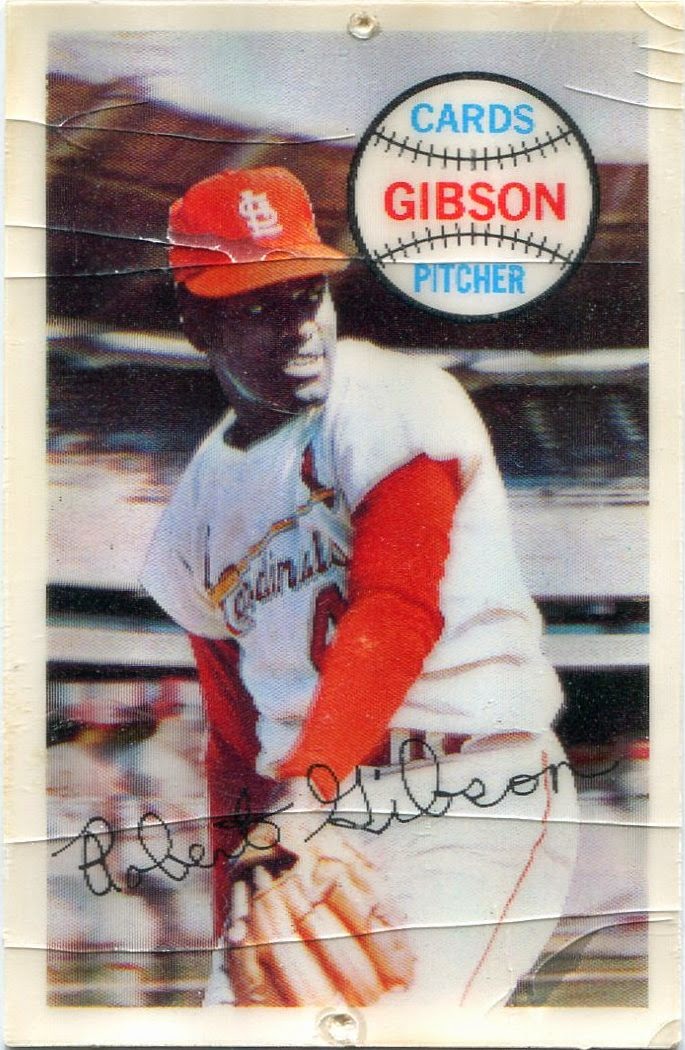 ...and quickly found another card from the 1970 Kellogg's set for sale.

This time, it was Bob Gibson. A Hall of Famer.

Again, I threw out a buck-fifty bid on it. Obviously, I wasn't expecting to win either card. Still, I figured it wouldn't hurt to at least give it a shot.

Boy, was I right.

Against all odds, I actually won both auctions with my dollar-fifty bids. Two big stars from the inaugural Kellogg's checklist at that price?

I couldn't believe it.

If my experience is any indication, I'd definitely recommend giving this whole virtual bargain hunting thing a look. You never know what you might find.

And you never even have to get out of your chair.

I'm gonna have to track down a copy of that Rickey Henderson card. It's a beaut!

I love passing time on eBay. I just get an itchy bidding finger sometimes!

"Blood Rain" is a very cool name!I didn't know some of those parallels existed either. You would think I would have seen a Score like that a time or two but nope! First time for everything. Great post Nick! You always remind me of why I love this hobby so much.