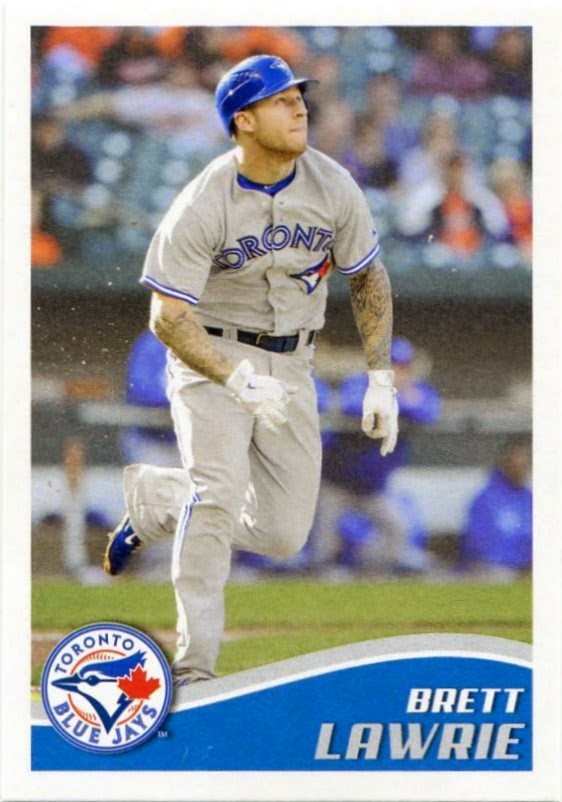 I'd fallen out of favor with Ebay long ago.

You can probably count the times I've visited the site in the past year on one hand. It just isn't the place for my cardboard preferences.

When I met up with fellow blogger Jeff at a recent card show, he mentioned his "virtual dime boxing" methods. He'd go to Ebay, search for baseball cards sorted by the lowest prices (including shipping), and throw out small bids on a few of them.

If he won them, great. They only set him back a few cents a piece. If not, then it's no big loss.

I was intrigued by the idea. I tried doing some virtual hunting on my own a few days after the card show, but didn't find much. I pretty much gave up on the idea after that. That is, until I was sitting at home with nothing to do one afternoon not too long ago.

I decided to revisit Jeff's virtual dime boxing methods. I spotted an auction for a Brett Lawrie Topps sticker that only had a few minutes to go. The seller was offering free shipping, so I threw out a bid of a quarter.

Not long after, I was surprised to learn I'd won the auction. Mr. Lawrie was coming home with me for a mere 23 cents.

I couldn't believe it. Ebay, of all places, landed me a great new card of a guy I collect for loose change.

From then on, I was hooked. 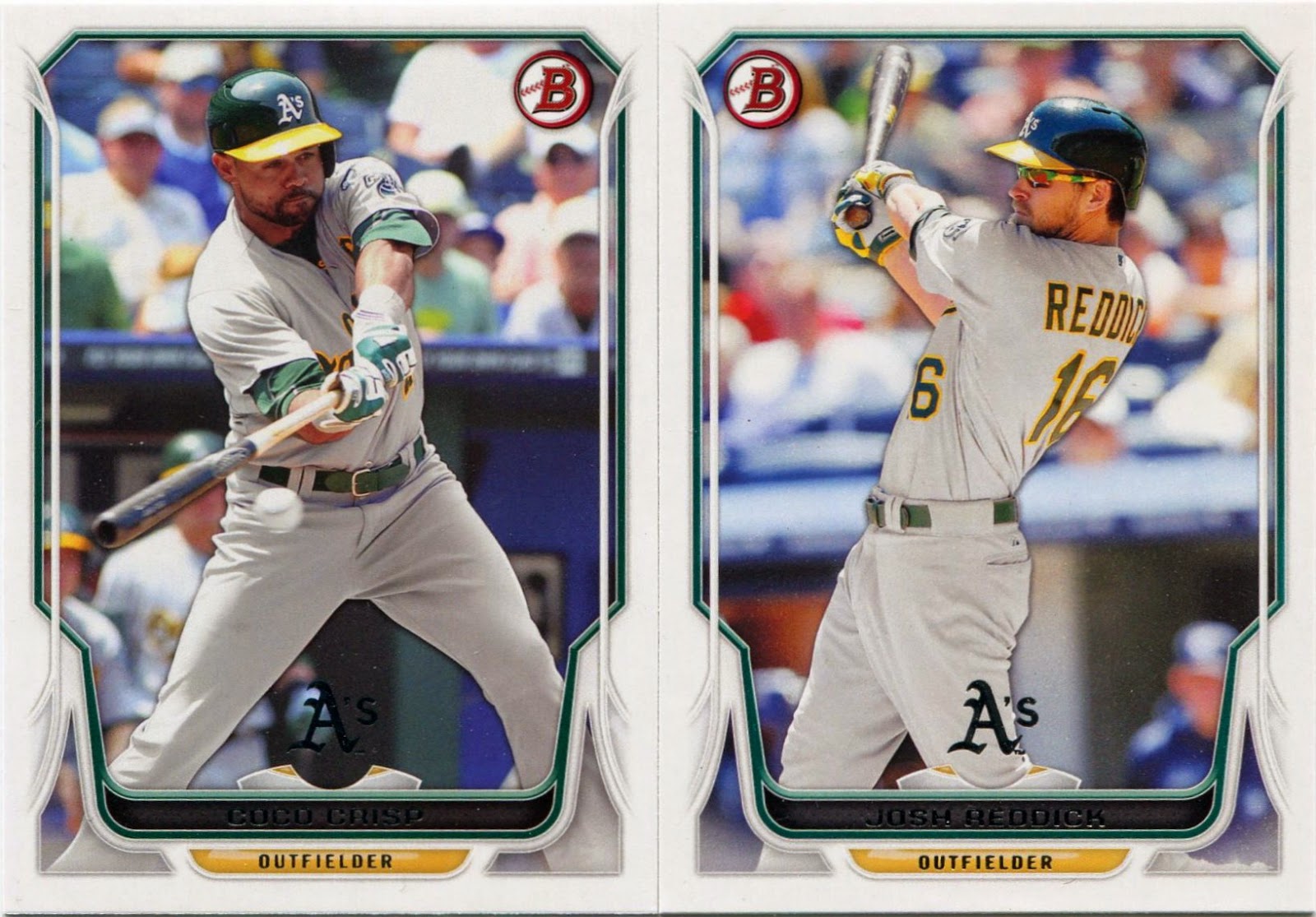 I threw out small bids on dozens of auctions after that.

I couldn't pry myself away from the computer for a few days, checking to see what other bargains were out there.

Not long after I won the Lawrie, I threw out another quarter bid on a two-card 2014 Bowman lot that featured Coco Crisp and Josh Reddick, two of my favorite players in the game right now.

I scored the pair for just 16 cents. 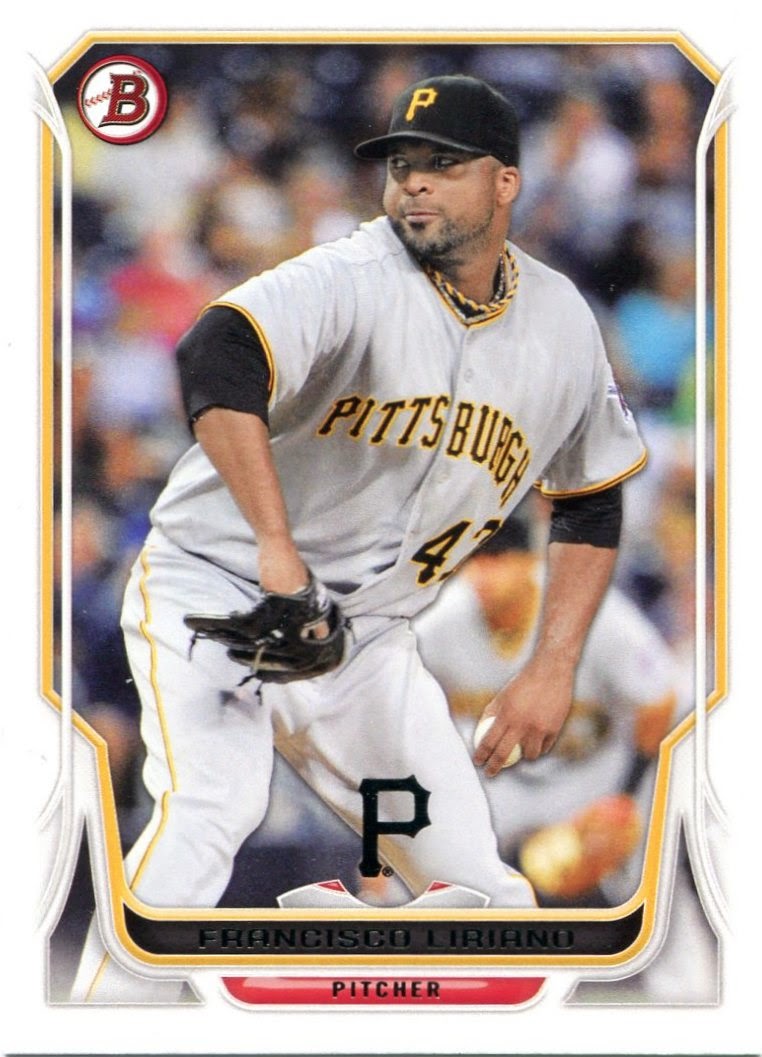 He cost me a whole 16 cents by himself.

These have the rather dubious honor of being my very first cards from 2014 Bowman.

Although I'm once again unimpressed with the design, the excitement of landing them during my virtual bargain hunting was more than enough for me. 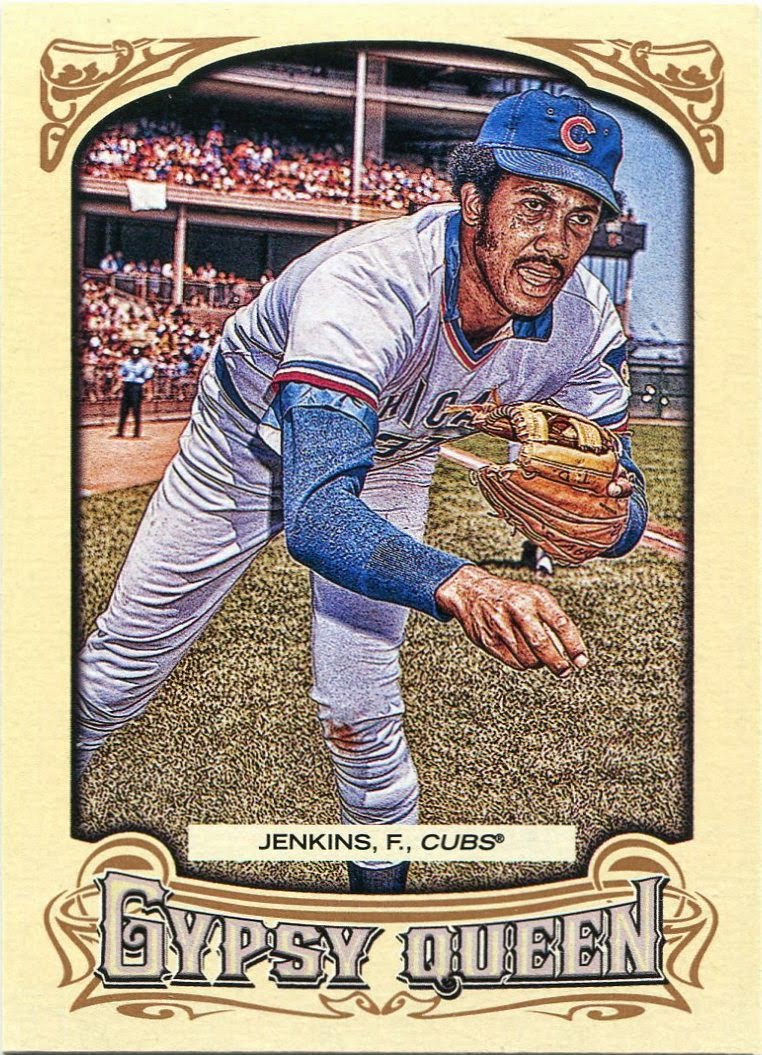 I also got my first look at 2014 Gypsy Queen through my Ebay rounds.

I haven't been a huge GQ fan in the past, and the 2014 edition isn't doing anything to change that. For loose change, though, I'm not turning down a card of Fergie here.

As it happens, I was actually outbid on this one. Apparently, the person who won it couldn't afford the 45-cent closing price, so the seller offered it to me at my bid of just over a quarter.

I was more than happy to accept. 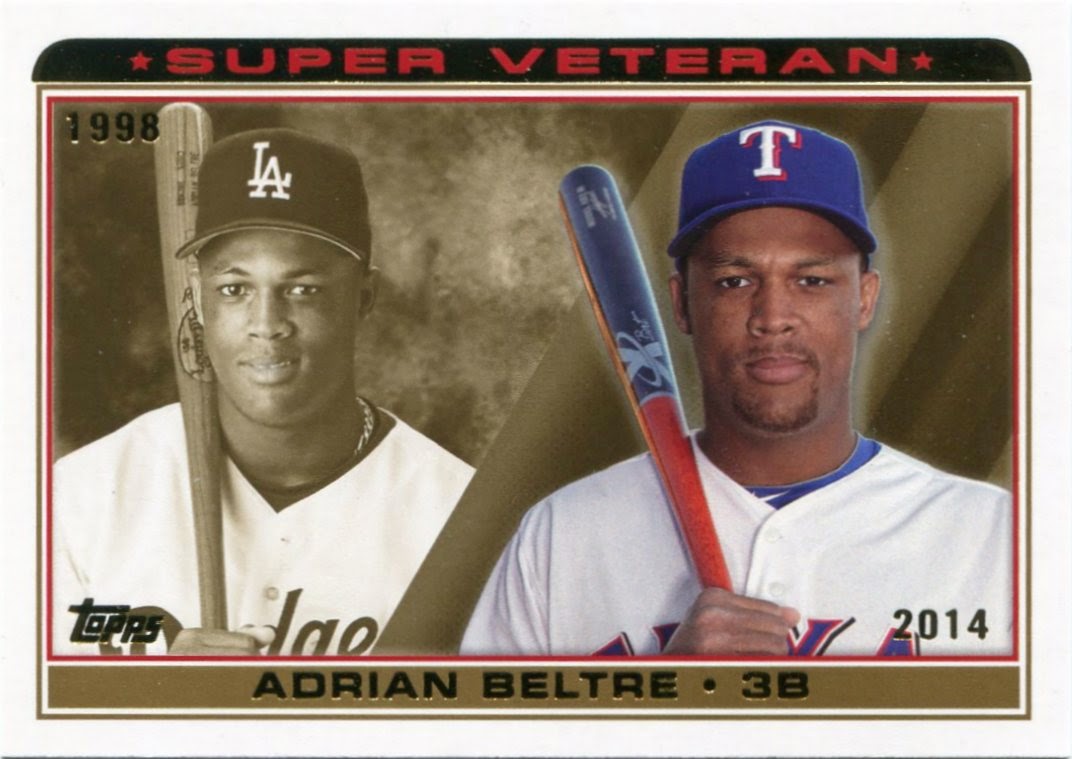 I should note that every single auction from my virtual bargain hunting included free shipping.

Ebay is notorious for people offering up simple base cards at low prices, but charging two or three bucks to ship them. That's one of the things that drove me away from the site in the first place.

The beauty of Jeff's method is that sorting the auctions by price takes the shipping charges into account. Thus, the vast majority of my wins cost me just pennies on the dollar.

I became the proud owner of this neat "Super Veteran" Adrian Beltre insert for a paltry 16 cents. 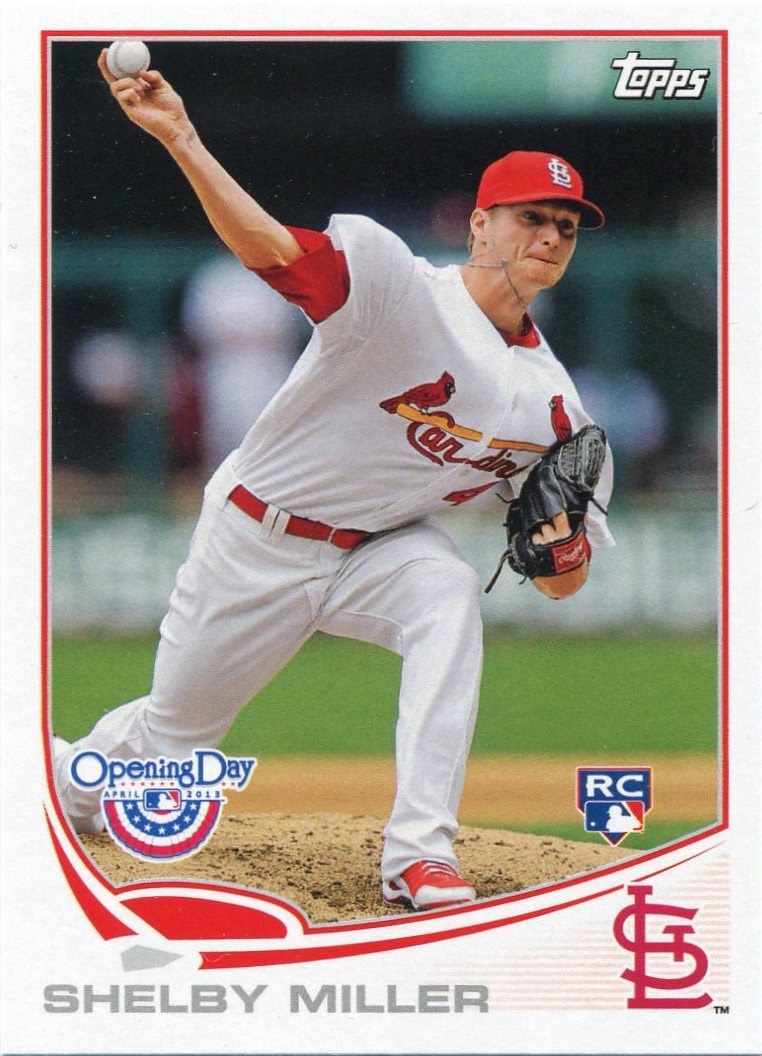 Even hot-shot prospects weren't immune to my virtual bargain hunting.

I landed this Shelby Miller rookie for just 26 cents.

Not bad for a guy who looks to be the real deal. 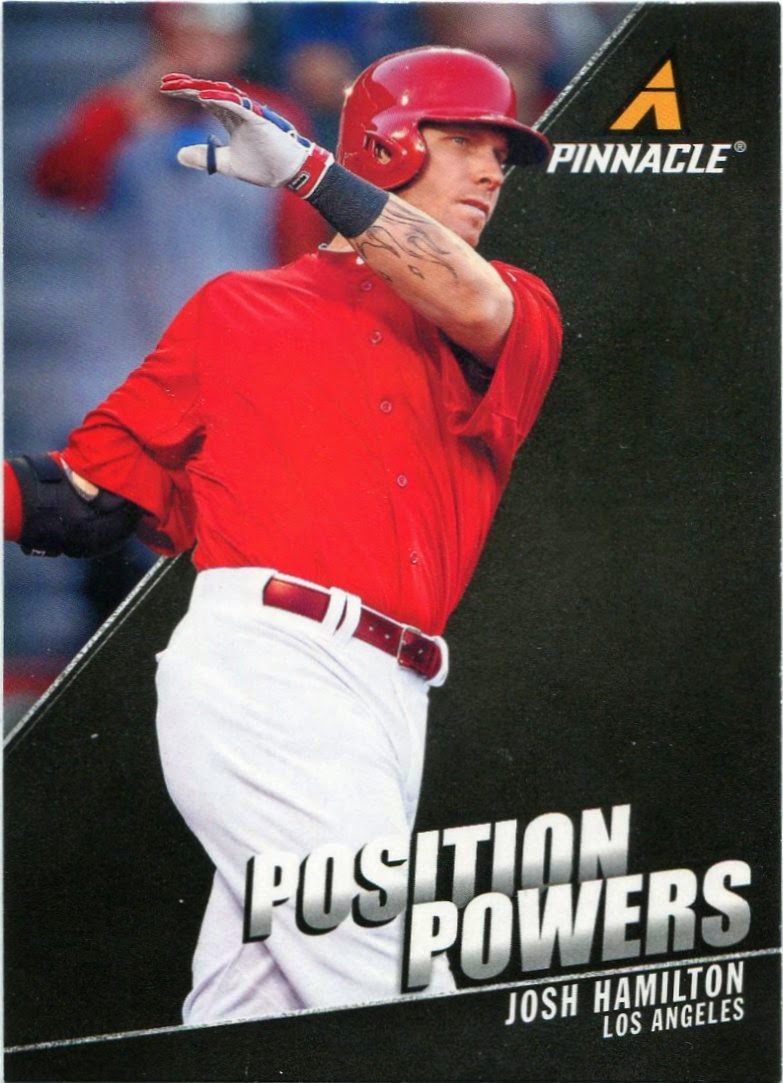 I was surprised at how many more recent cards could be had on the cheap.

When I first started, I figured most of what I'd find would consist of overproduction-era cardboard. A lot of people who sell on Ebay are notorious for worshipping the latest and greatest in the hobby, after all.

How wrong I was.

I scrounged up 31 cents for this nifty Pinnacle Josh Hamilton insert. 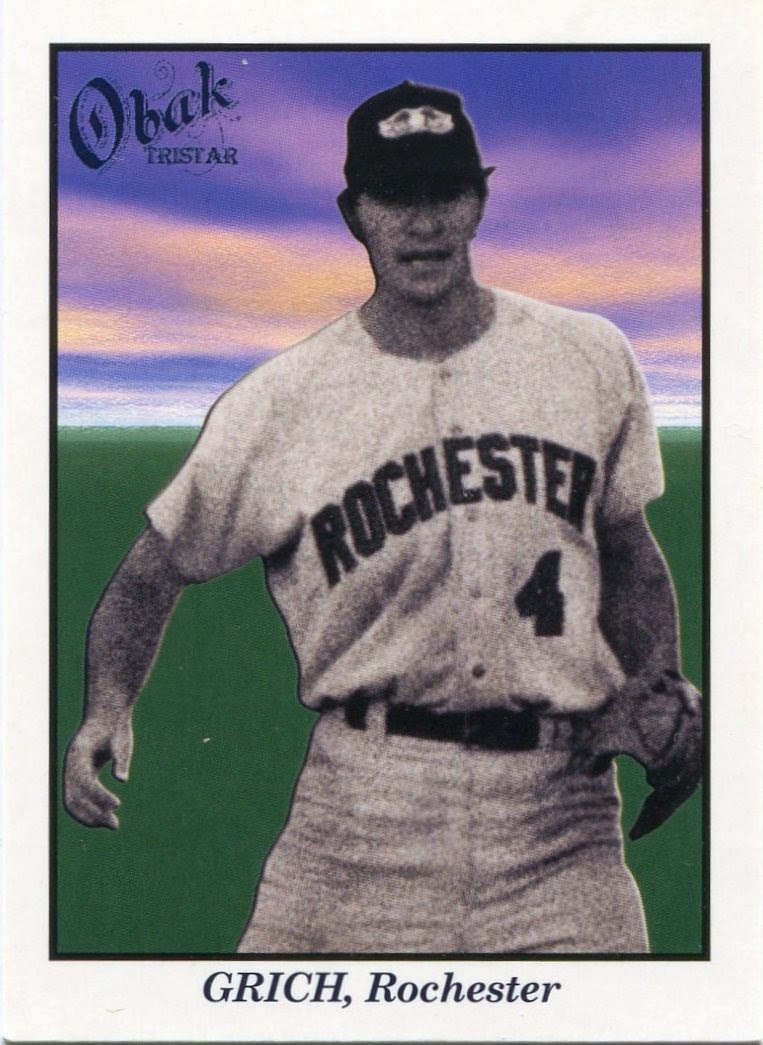 Though I did make quite a few more recent buys, there was more than enough to quench my thirst for seemingly random cardboard as well.

I recently decided to start a player collection of Bobby Grich, so scoring this one during my virtual bargain hunting was a real treat. You'd think such a neat minor league shot of him would cost more than 21 cents.

Things didn't get quite as intense as this during my bidding, but... ...I'm a bit ashamed to admit that I did resort to sniping at one point.

Someone outbid me on this terrific Frank Thomas oddball, issued at the 2012 National in Baltimore. I just happened to catch the auction during the last minute of its run. I think the high bid was around 50 cents at the time.

I threw caution to the wind and put up another bid on "The Big Hurt" with less than a minute to go. I ended up taking it home for 63 cents in a dramatic last-second victory.

My sincere apologies to my sniping victim, wherever you are. 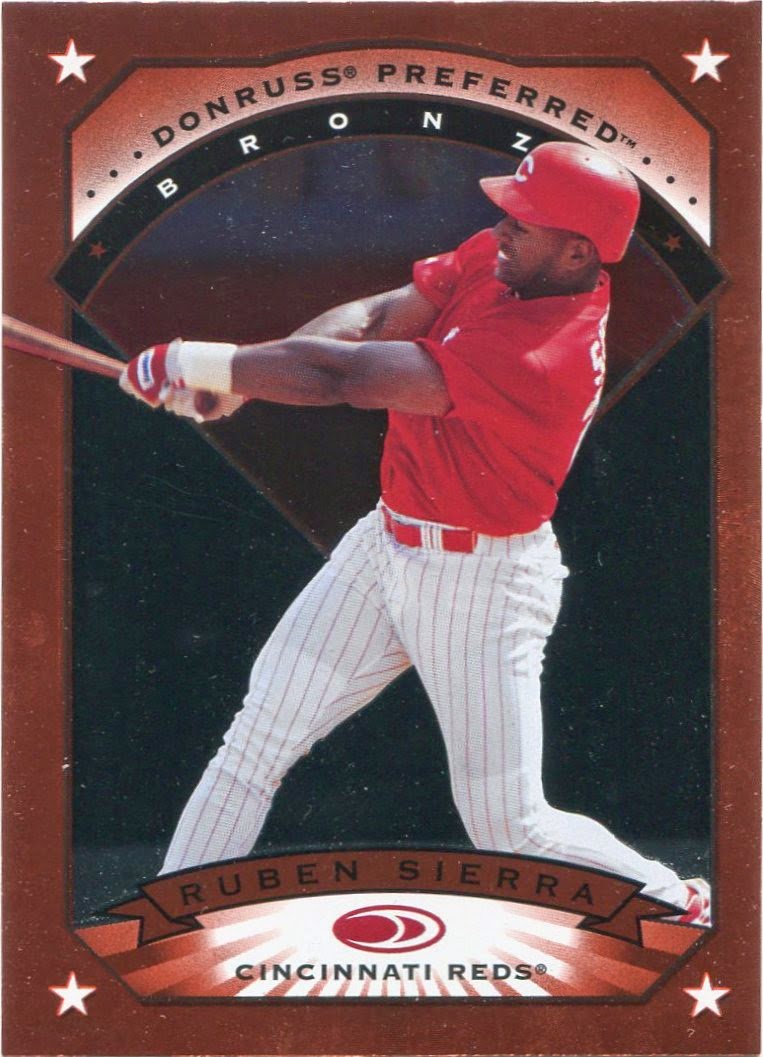 This is one of those cards that shows how crazy my randomness can be sometimes.

Ruben Sierra played for a lot of teams in the mid '90s. His tenure with the Reds lasted all of 25 games in 1997. I'd only found a couple cards of him in Cincinnati gear. This one from the forgotten Donruss Preferred brand had slipped under my radar.

I thought it was a huge bargain at just 16 cents. 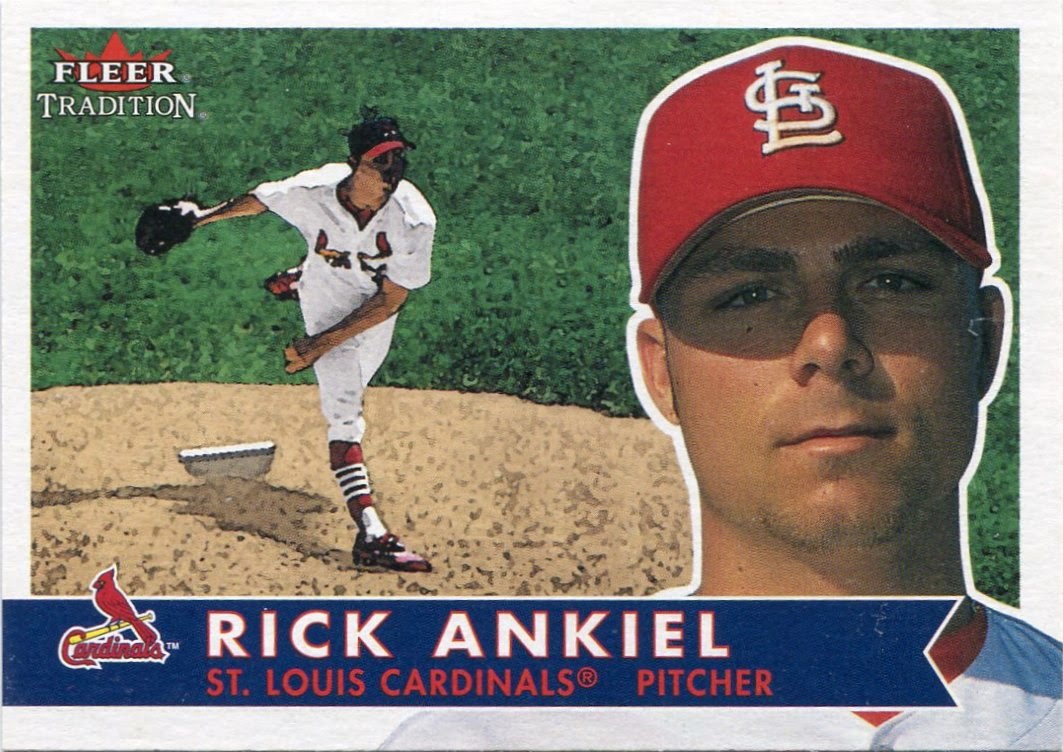 I couldn't believe my eyes when I won this one.

For one thing, I've long been a devout Rick Ankiel fan and collector. I own over 150 different cards of his as we speak.

This one, however, had never found its way into my binders. Coming from the criminally underrated 2001 Fleer Tradition checklist, I knew I had to have it. I probably threw out a higher bid than necessary, only because I really wanted this beauty.

Imagine my surprise when the auction closed at a whopping 15 cents. 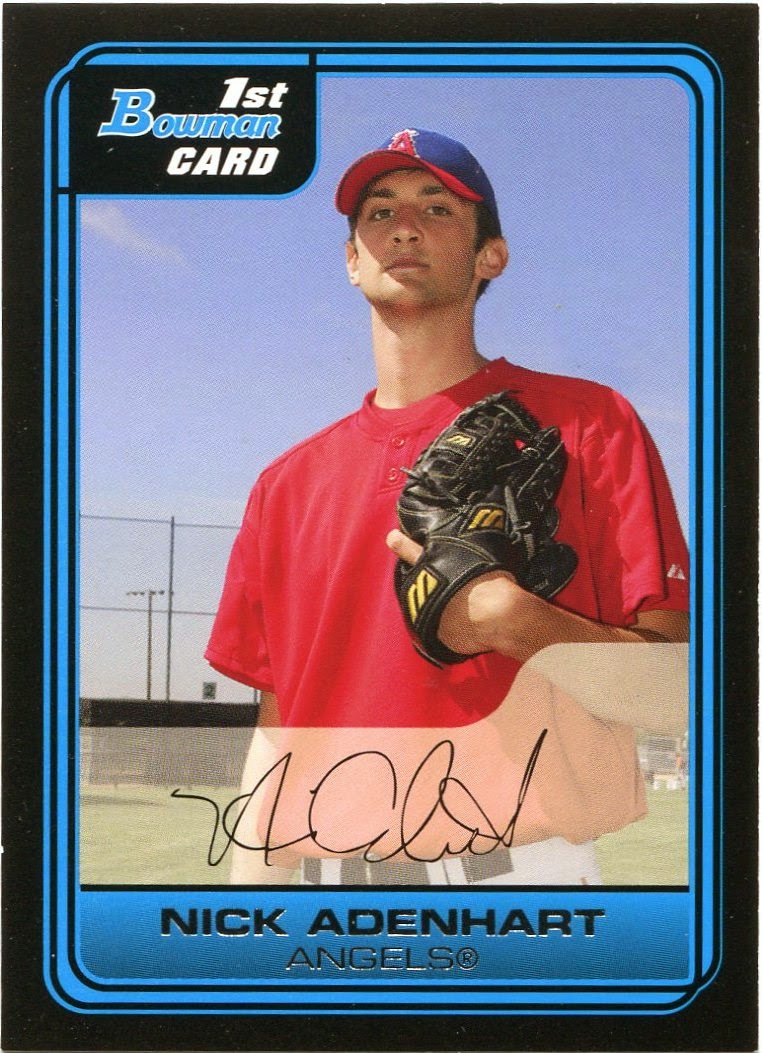 We'll close out my first round of virtual bargain hunting with a rookie card of the late Nick Adenhart.

I don't own close to as many cards of his as I should. Hearing of his passing is one of my darkest and saddest memories as a baseball fan.

I felt that owning a rookie card of his would bring my collection one step closer to completion. Not that, you know, my collection could ever be complete or anything.

At 75 cents, it was one of my higher-end virtual pickups.

Still, for less than the cost of a load of laundry, I'll take that deal every time.

So, just to conclude, the 13 cards I featured in those post cost me a grand total of $3.44 together. That's an average of about 26 cents a card. Shipped, mind you.

Believe it or not, these were only about half of my total Ebay finds. There were a lot of other huge surprises in store for me during my virtual bargain hunting.

Thanks to Jeff, I think I've fallen victim to yet another addiction in the world of baseball cards.

I set up all my want lists on eBay exactly that way. Sort by price.

I know the cards I coming PWE, so there is a chance of damage, though one card seems like nothing through the mail. But you can't beat the fun of it, plus you save gas, sitting on your butt in a comfy chair, no paper cuts. Why it took me so long to think of the idea is beyond me.

I have been doing the same thing on eBay for quite a while. In fact I had a series of posts for budget eBay collecting when I first started blogging. It really is the only game in town for those of us without an LCS. And it is a load of fun.

One of these days I will get around to checking out Ebay...only the cheap stuff of course.

your 16 beat my 11 cent bid on that Sierra fyi. the better man won it, it would seem. luckily i randomly found the same card 2 days later from a sportlots seller.

It is a great way to add base cards and base inserts, I do it all the time. Occasionally you will get a great deal on cards because the seller posts the incorrect name too.