I guess it had to happen sooner or later.

While on our quest for Series 2 at the local Target last week, my dad offered to throw a rack pack of Archives into our cart. I hadn't planned on buying any of the product, but I'm never one to refuse new cards.

If nothing else, it allowed me to write a semi-formal review of Archives on the blog. And, hey, the rack pack itself is a nice addition to my wrapper collection.

That said, I'm probably the only person who hadn't written anything about Archives up to this point.

I'll give you a quick warning now. You've probably heard most of what I'm about to say about Archives on other blogs already. I don't know that this post will be all that original. 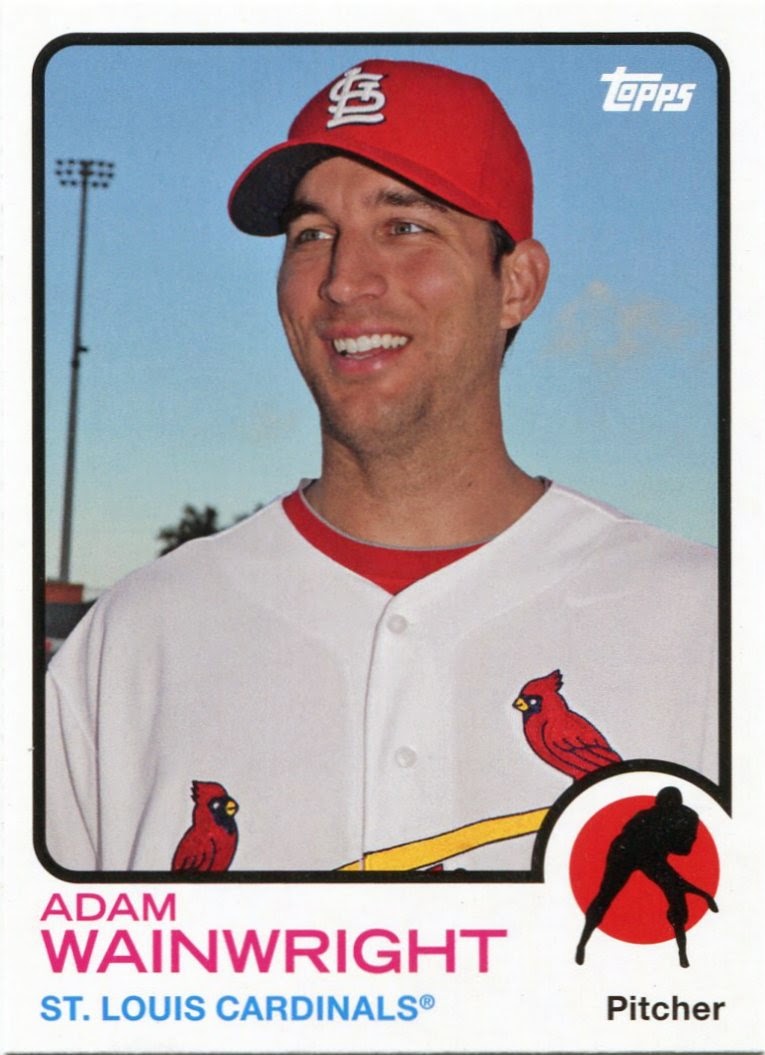 I'm going to be really unoriginal and get my number one complaint with this set out of the way first.

I don't think there's much denying that Archives has a ton of potential. The possibilities for new guys on old-time designs are endless.

But, for whatever reason, the people at Topps seem to be content with putting zero effort into Archives. I think that's best shown through their annoying habit of reusing the same photos over and over again.

I instantly recognized this shot of Adam Wainwright. 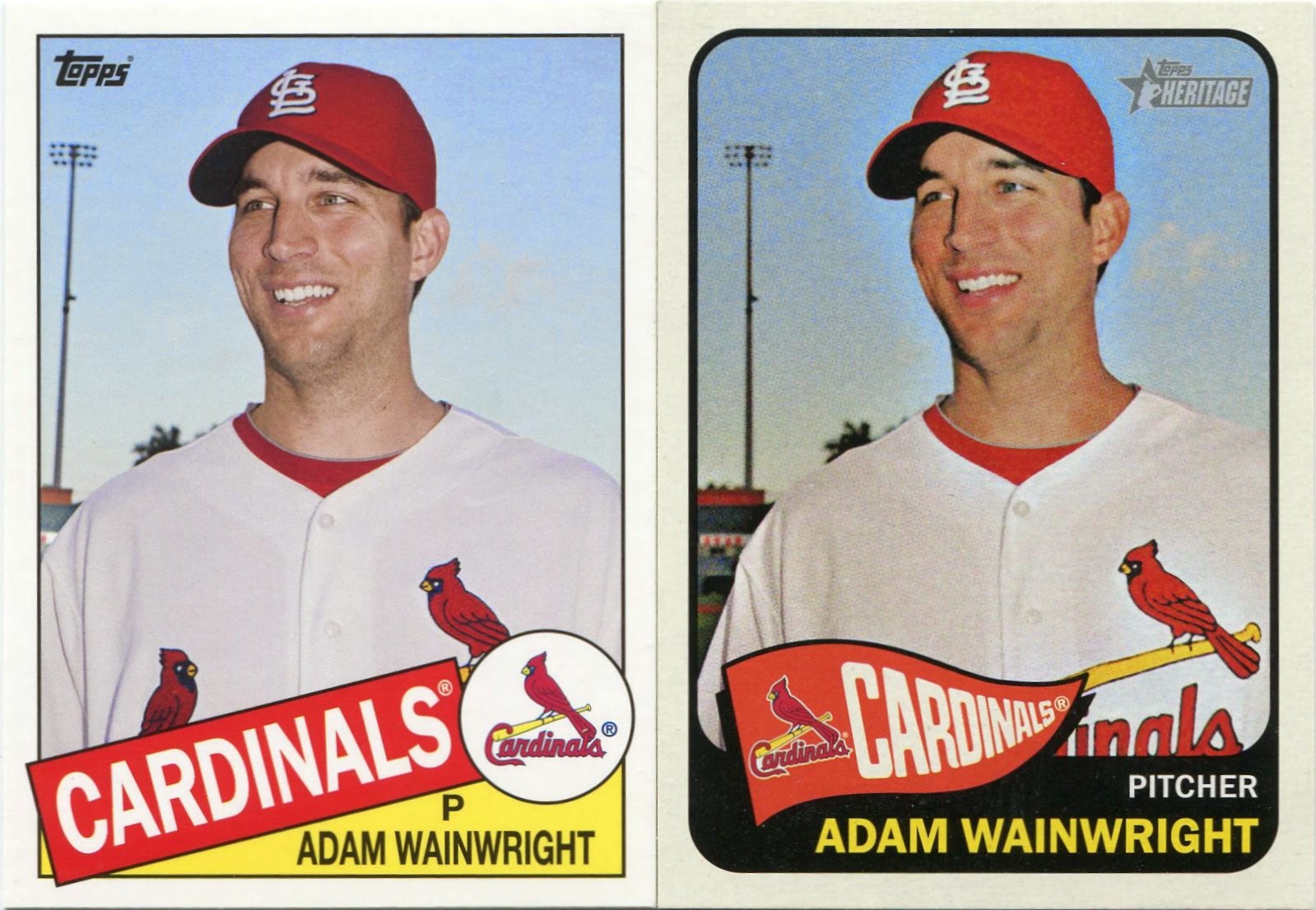 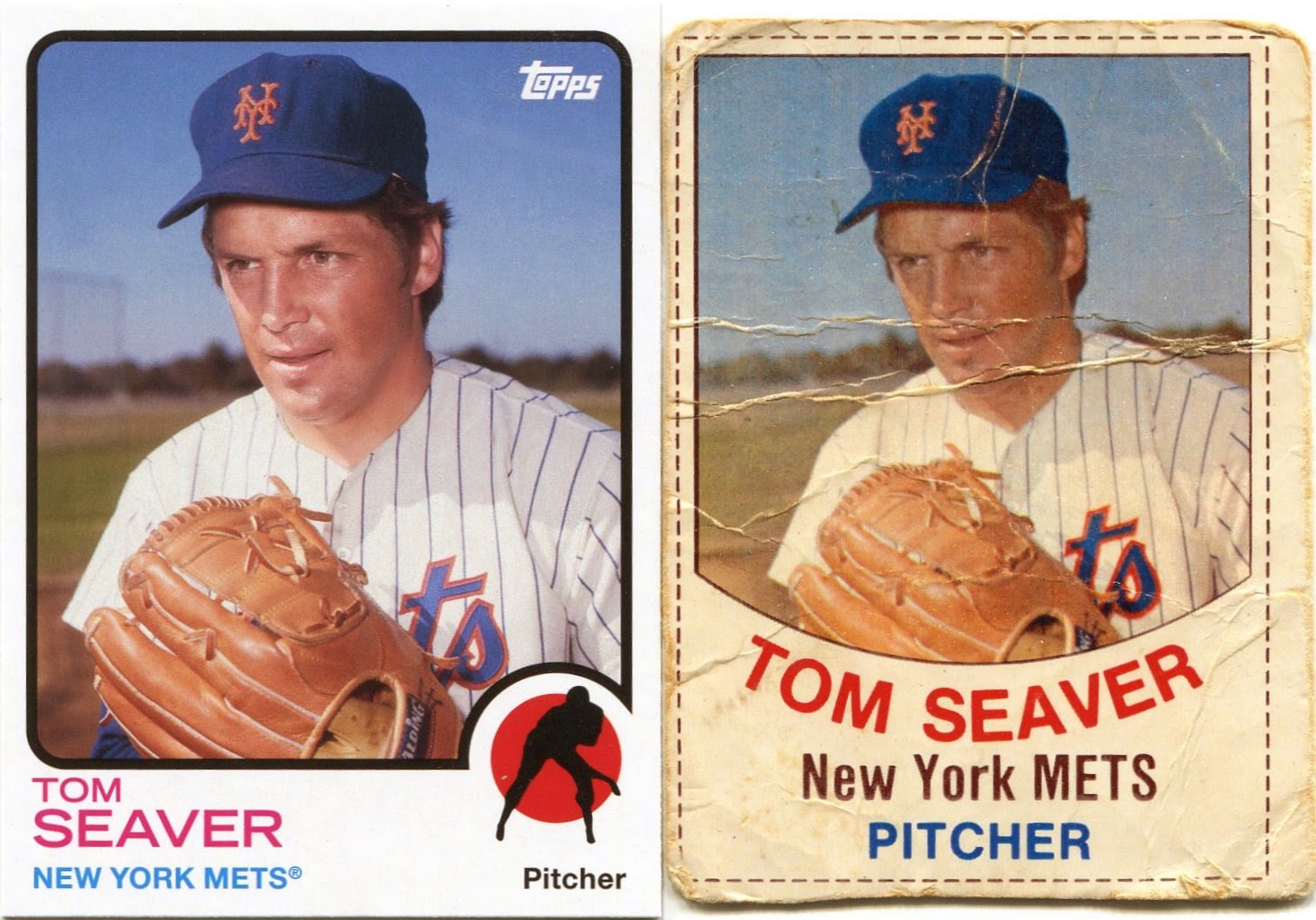 I think I found this shot of Tom Seaver on about three or four other cards.

The original is recycled from his 1977 Hostess issue, which is actually kind of cool. I wouldn't think Topps would even keep those old Hostess images in their inventory.

Still, I'd much rather see Topps use an original photo of "Tom Terrific" in Archives. This is perhaps the most egregious example of the whole recycling phenomenon.

What we have here is an image of Adam Eaton quite obviously photoshopped into a White Sox throwback jersey. Topps couldn't even be bothered to snap an actual shot of Eaton in Sox gear for their Archives release.

They chose to just use the same altered image. 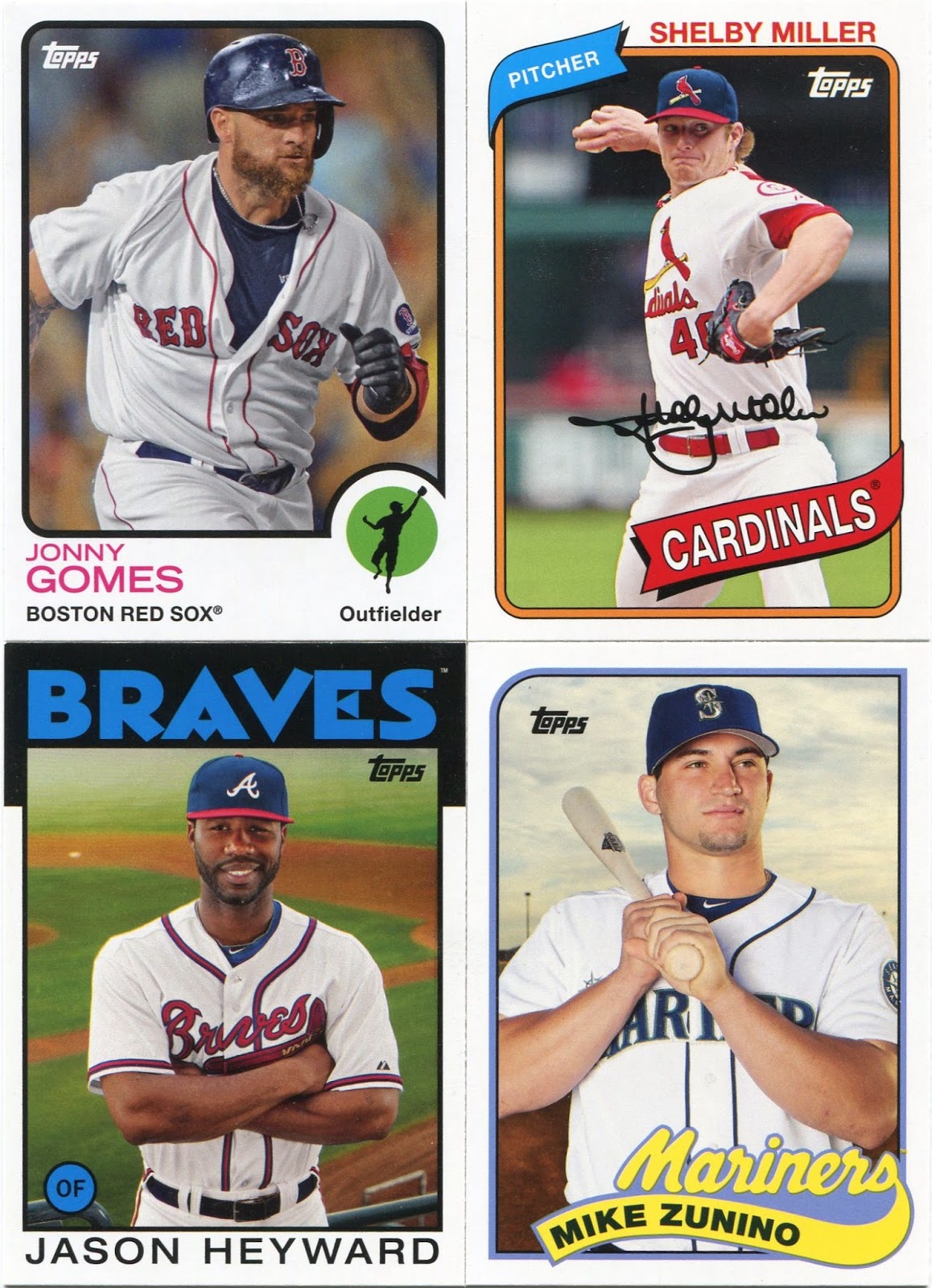 Here are the four basic designs Topps used for 2014 Archives.

1973 -- Solid choice. Easily among my favorite Topps designs and one that hasn't been honored nearly enough in the current retro craze.

1980 -- Not one of my favorite Topps designs in the first place. I'm even more apathetic towards it now, considering Topps already used it for Archives in 2012.

1986 -- Probably the best-looking cards of the quartet, although the use of two designs from the 1980's seems uninspired.

1989 -- If two designs from the '80s are uninspired, then three are just plain lazy. Even more so considering Topps is already using the '89 look for this year's Flagship minis. Also, the amount of blank space on the nameplates really bugs me.

I think Topps should honor a design from four different decades in Archives. Something along the lines of '56, '69, '73, and '81 would've made for a top-notch set in my book. Instead, we get three designs from the '80s.

And, although I didn't pull any from this rack pack, I've heard that the short-prints from this year's Archives are equally mind-numbing.

I'd love to sit in at a Topps production meeting and hear just what goes through the minds of the head honchos over there. 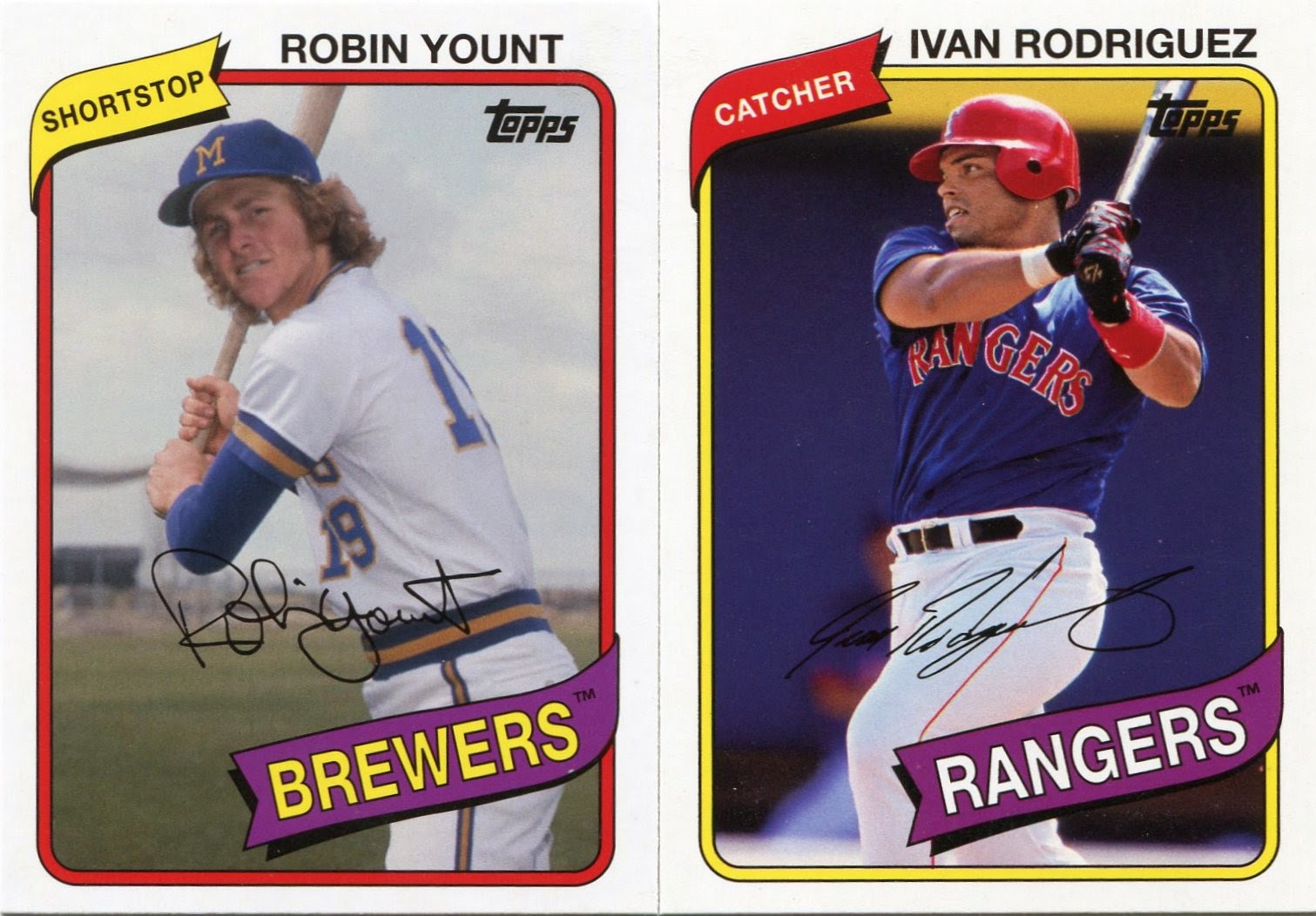 Believe it or not, there are some things I like about this year's Archives. Namely, the inclusion of retired greats that aren't often seen in the hobby these days.

I'm especially fond of Topps using such an early shot of Robin Yount. Those old Brewers uniforms are terrific.

If you turn Mr. Yount over, though... 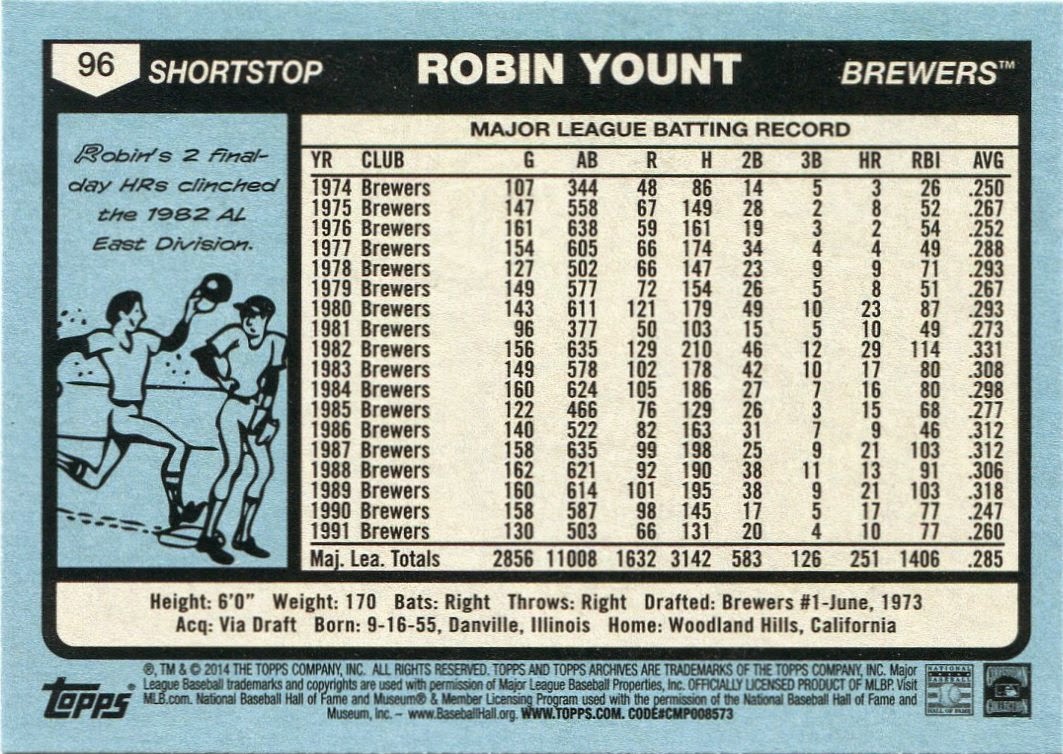 Robin Yount ended his Hall of Fame career in 1993. If you look closely, you'll notice that the stats on this card only go up to '91.

What gives? You couldn't squeeze two more years of stats in there, Topps?

Between recycled photos, repeated designs, and truncated stats, there's just so much about 2014 Archives that is open to second guessing. In all honesty, though, this is one beautiful piece of cardboard.

As I said earlier, I think the 1986s turned out the best from my brief rack pack sample size.

This is a perfectly nice shot of Warren Spahn. And, more importantly, it's one that doesn't show up on any of my other cards of his.

It's a glimpse into what Archives could be if Topps chose to put any effort into it whatsoever. 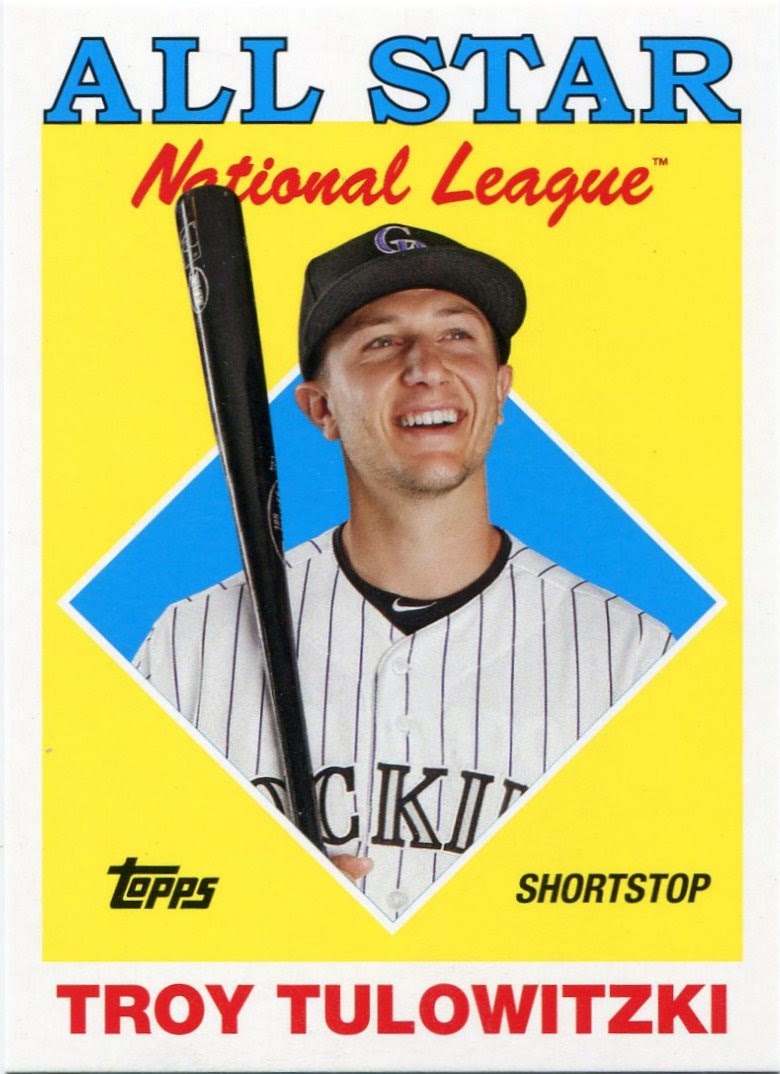 I've never had a problem with Archives inserts.

Although I wasn't lucky enough to pull any from my rack pack, the idea for the Major League series is one of the best Topps has had in a long time.

The only insert I pulled was this Troy Tulowitzki, one that honors the 1988 Topps All-Stars subset. I was never that big on the originals, but seeing this one makes me like the design a little bit more.

In the end, that's what a set like Archives should try and accomplish.

I get the feeling that Topps knows they have a good idea on their hands with this product. Until they decide to put any effort into it, though, Archives will always remain a middling set to me.

I haven't blogged about Archives, and probably never will since I'm not a fan of it in the least.
That said this post was still enjoyable and that bit about the Seaver Hostess card made it different from the other Archives posts ;).

The Gomes on the 73 style card actually looks pretty good

It's a shame to have such a good idea poorly executed. I HATE the extra space on the '89 name plates, too. How lazy is that? If they could make it work a quarter century ago, they can make it work now. The '86s look nice though, especially that Spahn.

Those All Star cards are from the 1988 Topps set. Now that I have been an @$$ and corrected you, let me go further by asking if that card is available.

Dang, you're right. It is from 1988. I might actually build that insert set, so I'll most likely hang onto the Tulo for now. If I decide not to, it's all yours.

I recently got some 2014 and 2013 Archives, and when I was putting the cards into my "current roster" binder I found several cards that had duplicated photos... and those cards immediately went into my "purge" box. My collection is already too large without adding crap like that.

...but that being said, I never realized that the Seaver photo was the same as on his 1977 Hostess card. I'll admit, I don't mind that duplication as much.

I'll probably be the last to blog about 2014 Archives, if I blog about it this year. I don't jump on the blogbandwagon race to be the first to post about a new product. Partly because I don't race out to get the new product when it first hits the shelves and don't pre-order to get any of it shipped on "Opening Day". So I post about products whenever.

My biggest beef about archives is the retro minis. I could do without all the minis in products now. I think I'll stick with A&G minis maybe and maybe minis of my homie teams. I am really not a fan of the '89 die-cut minis. UGH.

This set is also a so-so set to me. I like the concept but it just hasn't wowed me yet. While I get the occasional car that I really like, overall this set just doesn't do it for me. That said I do like some of the cards you pulled here. I won't rush out to buy more but I might at least think twice about it.