Kick out the jams, reprise 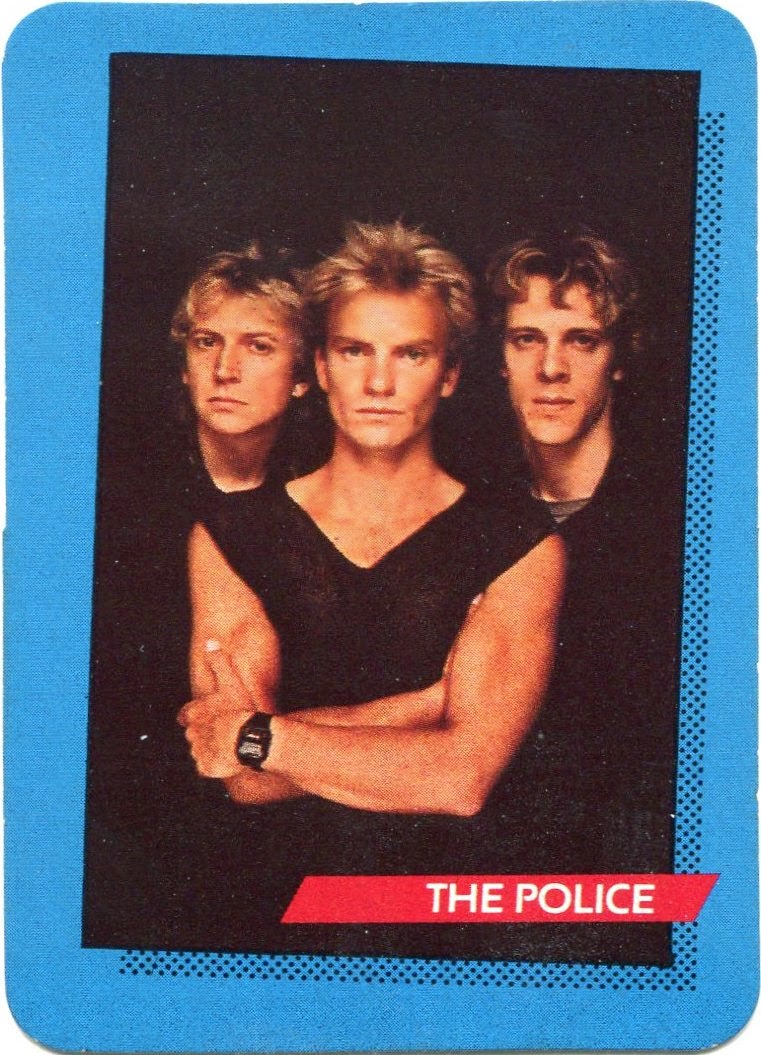 A short while ago, I wrote a long overdue post about all the music-related cards in my collection.

Little did I know of the chain reaction it would set off.

My good buddy Fuji mentioned the 1985 Rock Star Concert Cards set in the comments of that post. As fate would have it, my dad was digging through a few old boxes not too long after that. Guess what he found?

That's right. A rubber-banded stack from that very same '85 Concert Cards series. My dad said he remembered buying a few packs of them when they originally came out, but hadn't touched them since then and couldn't remember where they were. Until a couple weeks ago, that is.

He graciously donated them to my music collection. Personally, I'd never heard of the set until my dad and Fuji both mentioned it.

Granted, not a ton of the cards I found match up to my particular music tastes. But that doesn't mean I can't enjoy them.

One band included in this Concert Cards series that I do enjoy is The Police. I didn't start to dip into their material until about two or three years ago, but I've been finding loads of great songs of theirs ever since.

I can't help but wonder what took me so long. 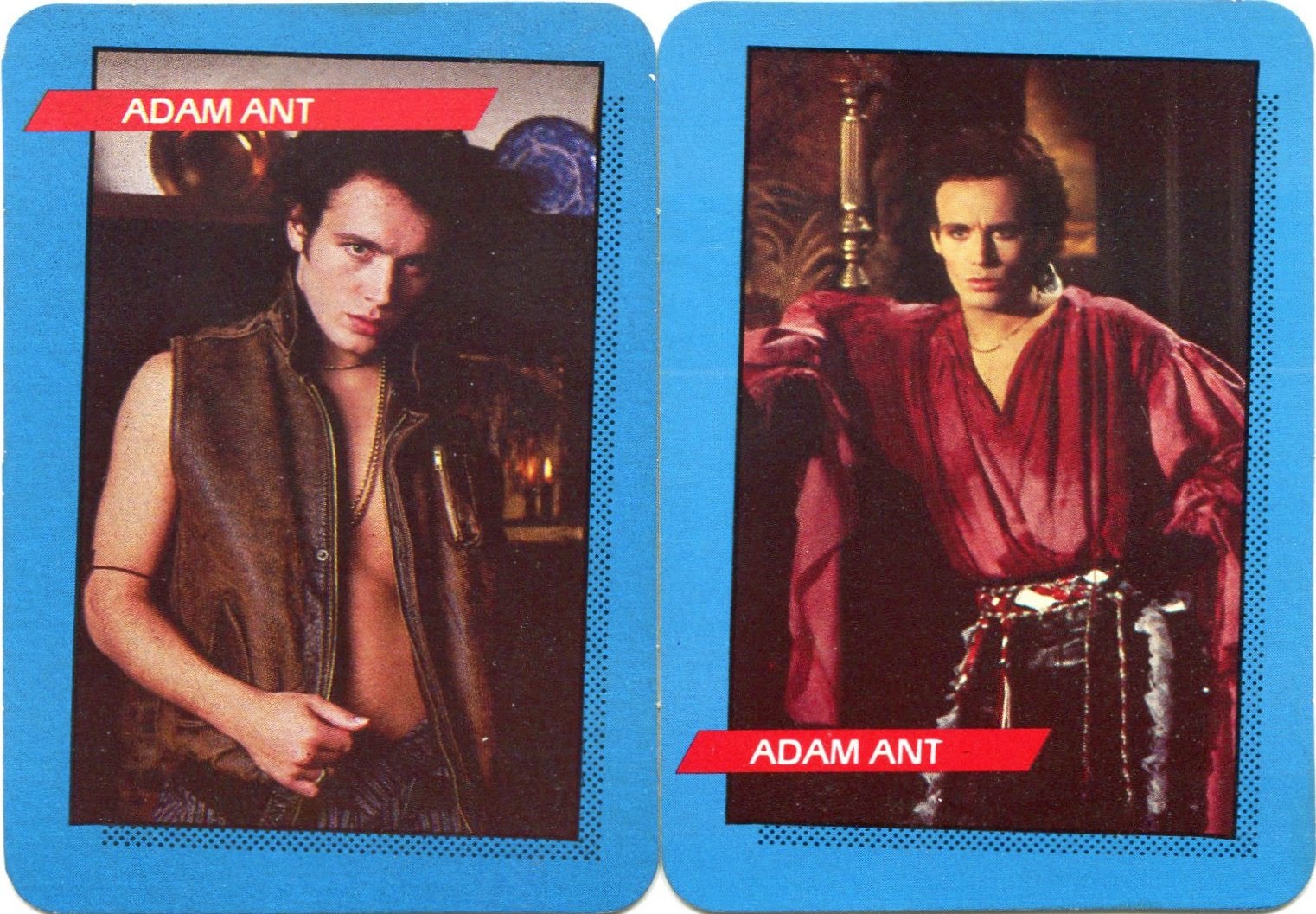 I can't say I know much about Adam Ant.

I've heard his name on a number of occasions, but I never realized how popular he was in the '80s.

As it happens, he received not one, not two... 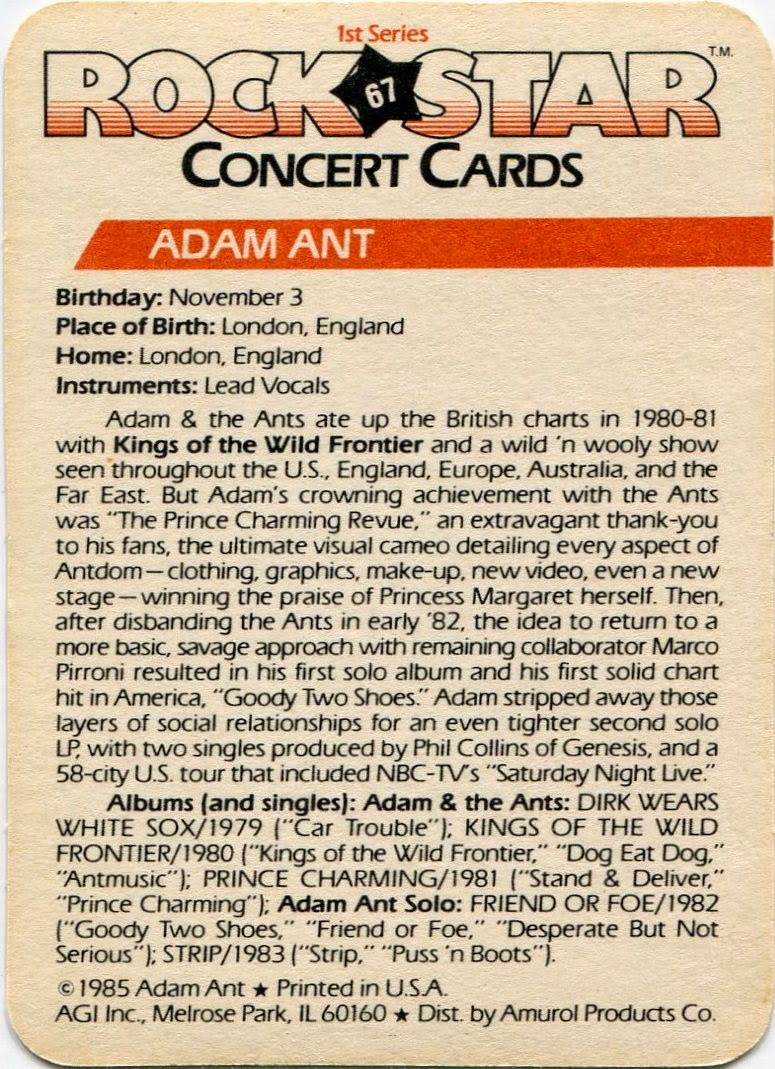 ...but three different cards in this set.

The backs are way more detailed than most baseball cards you'll ever find. They even contain every single album and single ever released by the given artist. 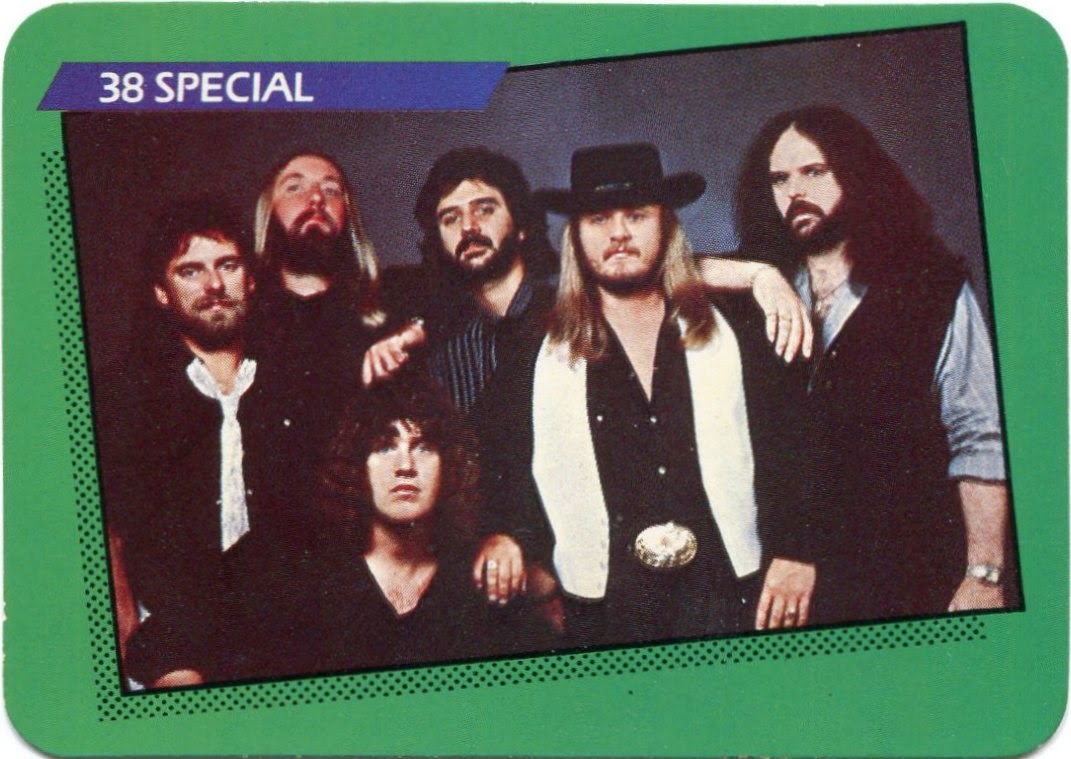 Although I'm not sure if it's supposed to mean anything, the cards are grouped into different colored borders.

38 Special, for instance, gets a green border. 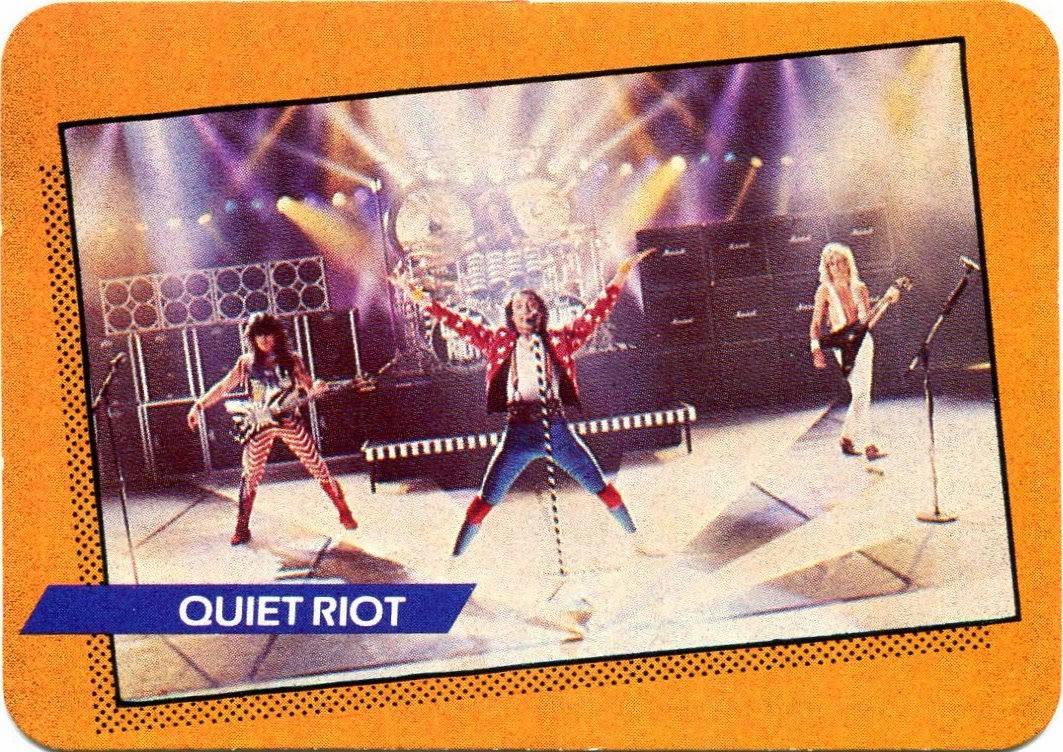 Quiet Riot, on the other hand, gets an orange-yellowish border.

While I'd take it over anything played on the radio these days, I'm not a big metal fan. 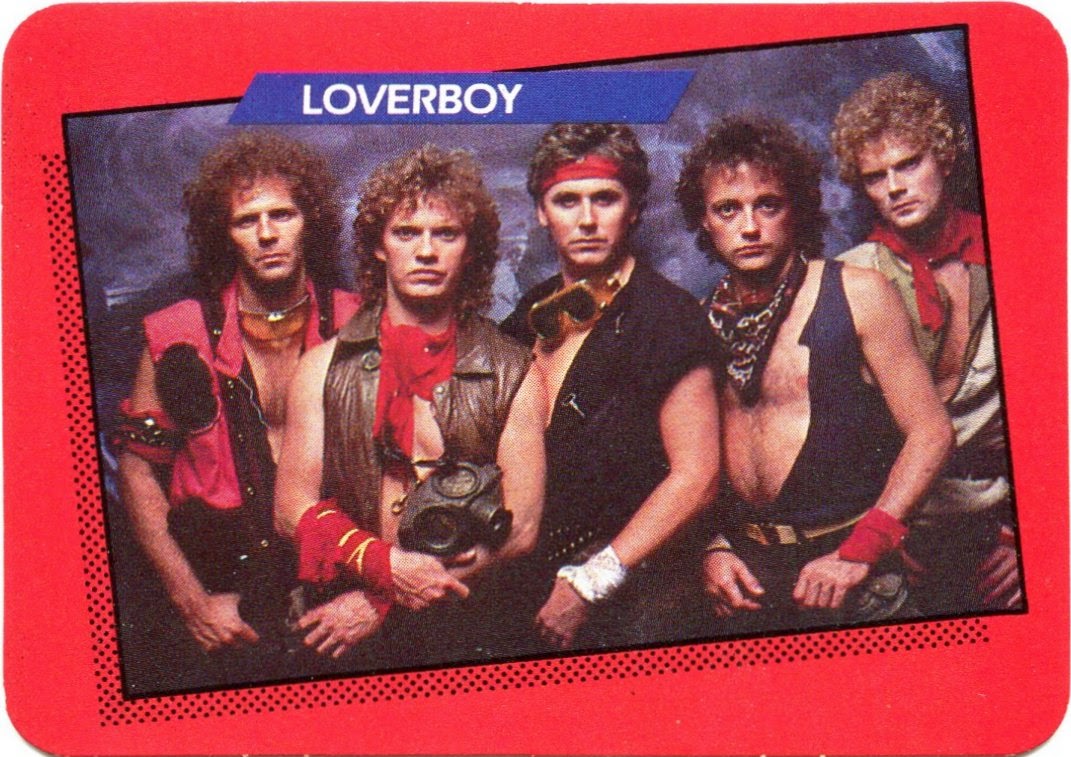 Just a little too much hairspray for me.

Okay, way too much. 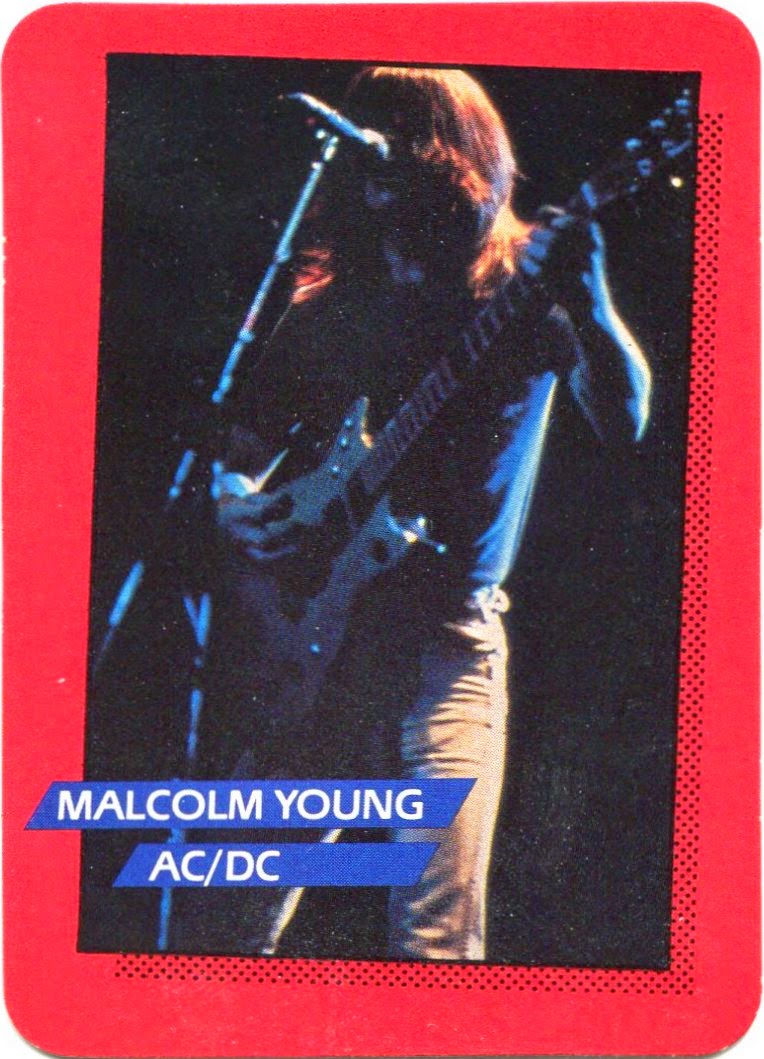 I used to like AC/DC a whole lot more than I do now, but they still have quite a few songs on my playlist.

My dad didn't have the big name guys like Angus Young or Brian Johnson (Bon Scott had passed away years before this set was released), but he did manage to pull this Malcolm Young back in '85.

Although his brother gets more of the publicity, I've heard that Malcolm was actually the one who started AC/DC. And, while I'm not a virtuoso of technical music knowledge, I can tell that Malcolm's rhythm guitar is what keeps their songs together.

Plus, I can certainly appreciate any band who has kept chugging along for over forty years. 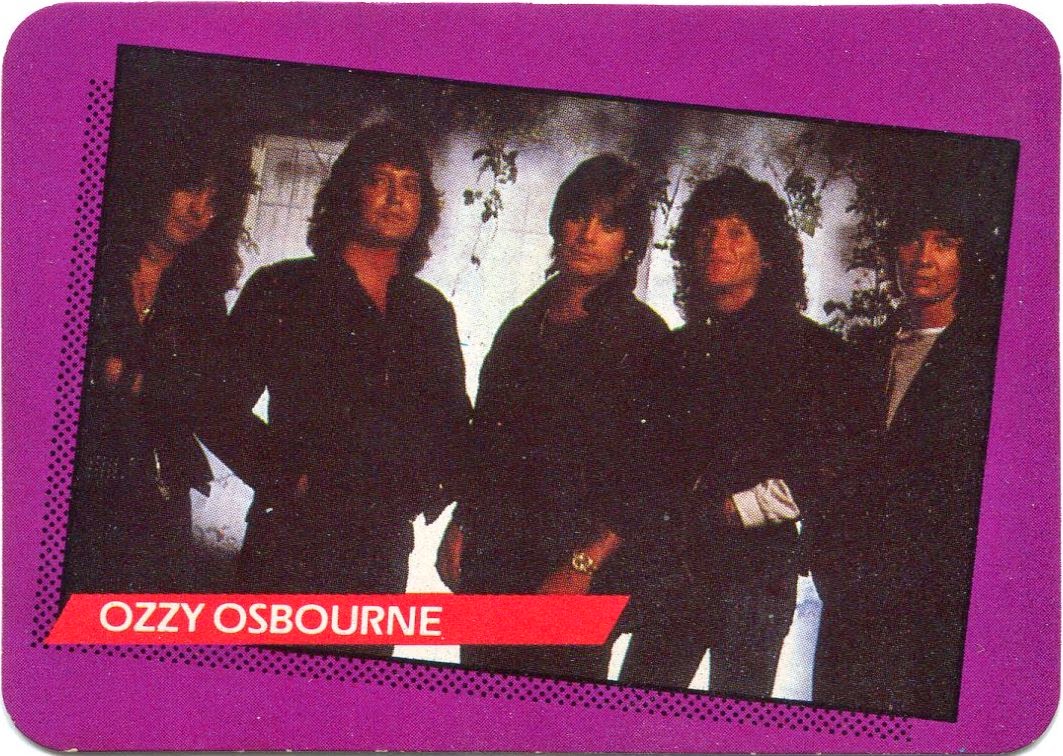 I have a passing interest in both Ozzy Osbourne and Black Sabbath. They're one of those bands that I feel like I should enjoy a lot more, but I can't for whatever reason.

I'm sure this was one of the chase cards back when this set was released.

I can appreciate the novelty of their image, although very few people actually dressed like this in the 1950's. I don't know too many of their songs, although I have enjoyed the few I've heard.

Plus, I can get behind any band with a stand-up drummer. The Violent Femmes are the only other rock group I know of that has one, and they happen to be one of my absolute favorite bands.

It's too bad they didn't get a card in this set. 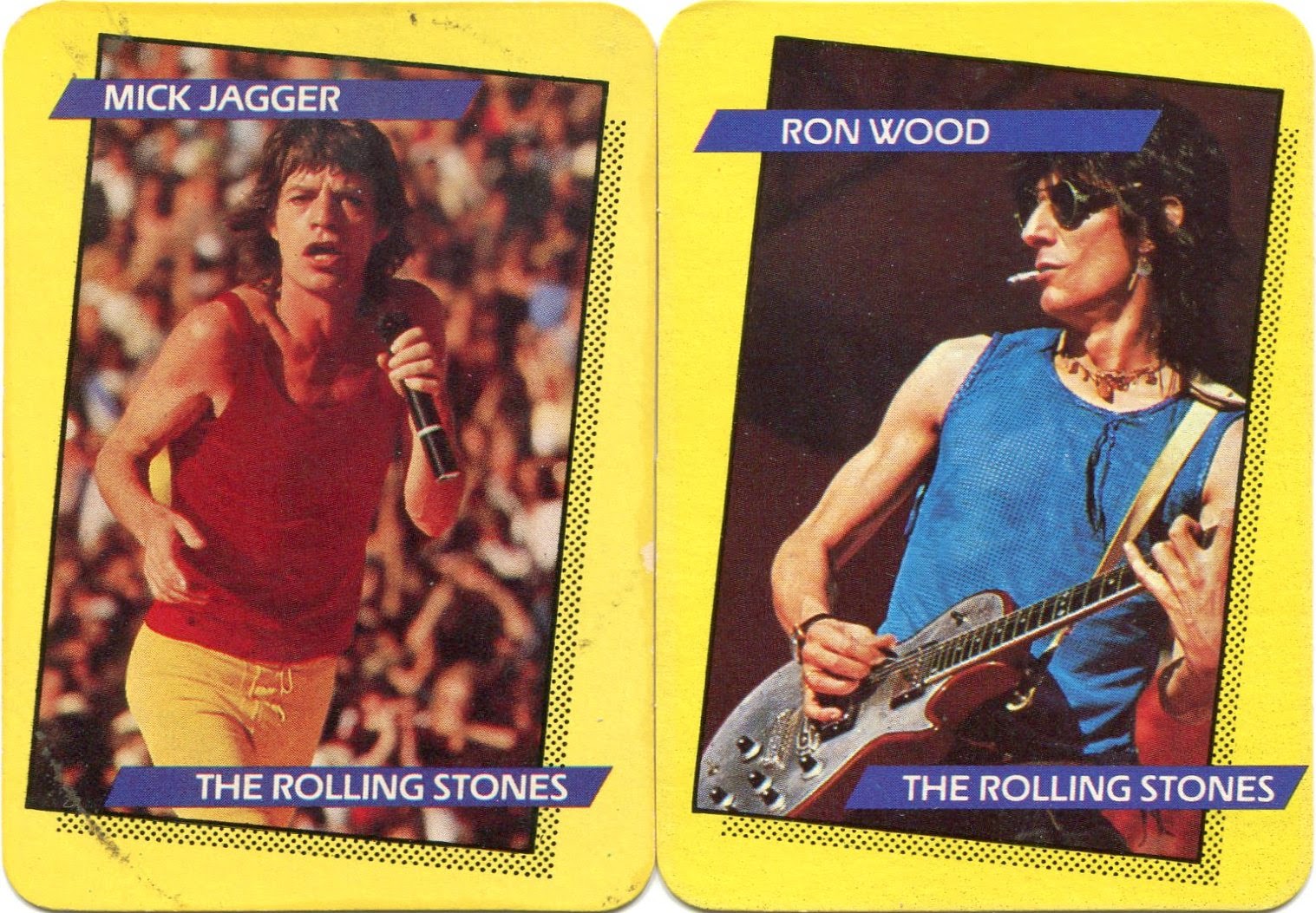 For both my dad and I, though, these were the biggies.

Although I can't seem to find a checklist anywhere, I'll bet that each of the five Rolling Stones received their own cards in this set.

You can't go wrong with Mick Jagger and Ron Wood. 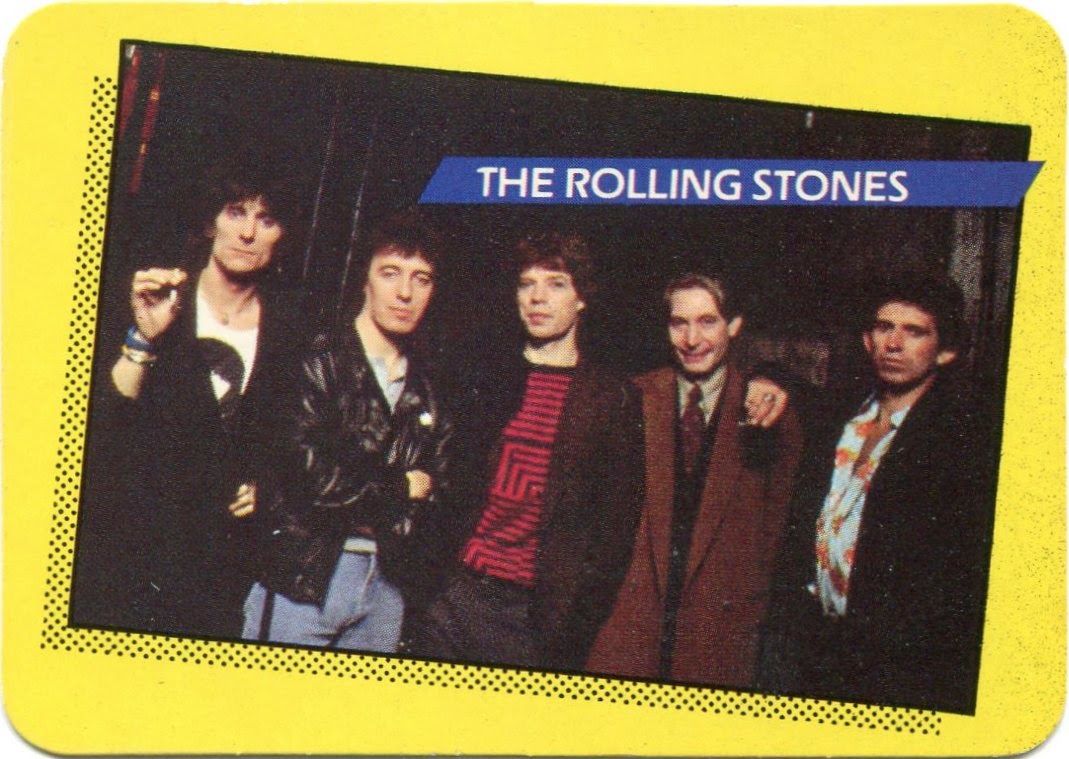 But, more importantly, my dad pulled the coveted group shot of the Stones.

I was kind of a late bloomer, but they've quickly become one of my favorite bands in the past few years. They're near the top of my dad's list as well.

As I've mentioned before, my dad is as much into collecting vinyl as I am with cards. I've heard him say on a couple occasions that Exile on Main St. is his all-time favorite album.

After this generous starter set from my dad, I'm interested in chasing down the rest of this Concert Cards series.

I guess I'm just a sucker for anything that combines music and cardboard.

Got into The Police too late to see them live, but I saw Sting 4-5 times. Great stuff. A few underrated gems to revisit: The Bed's Too Big Without You, Canary in a Coalmine, Shadows in the Rain, Tea in the Sahara.

Exile is definetly in my alltime top five albums...the Ronnie Wood card is cool. He is a much underrated player

My little brother and I had an idea as kids to start a band that only did punk versions of Police songs. Never happened. "So Lonely" is my favorite song by the group.

I've got a few of those cards as well.
Adam Ant was all over MTV in the early 80's.

Wow, ViolentI would trade all of the other cards you have there for a Violent Femmes card, if such a thing existed... well, maybe not the Police. It all depends on my level of "Sting Fatigue" when you ask me.

(Sigh)... Somehow I lost part of the text as I was publishing. The above post should've started off as "Wow, Violent Femmes... I am very impressed. I would trade..."

This set definitely shows my age. There are so many groups in this set I grew up listening to. The Police are one of my favorite bands of all-time... right up there with the Beastie Boys.