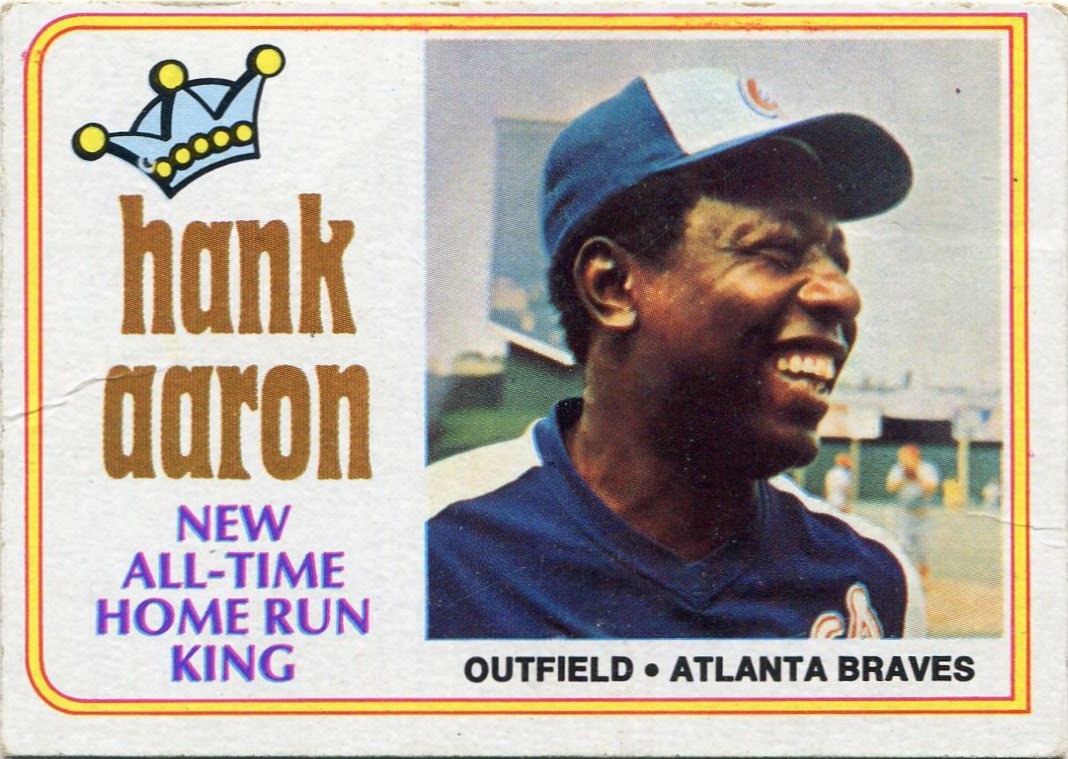 The card companies are all in one big conspiracy.

When I stop and look through my collection, I sometimes spot odd coincidences. Coincidences that can't be explained with much rational thought.

You know what? I think there's a secret force behind the card companies that none of us know about.

When I picked up my copy of Aaron's famous "Home Run King" card, I didn't realize that it was originally released before "Hammerin' Hank" actually broke Babe Ruth's record. The back lists his career total at 713.

My theory is that someone at Topps placed a crazy 10,000-to-1 bet that Aaron wouldn't break the record in 1974. Whoever it was snuck this card into the checklist that year, hoping it would prevent him from passing Ruth.

Aaron showed them, though.

He broke it anyway. 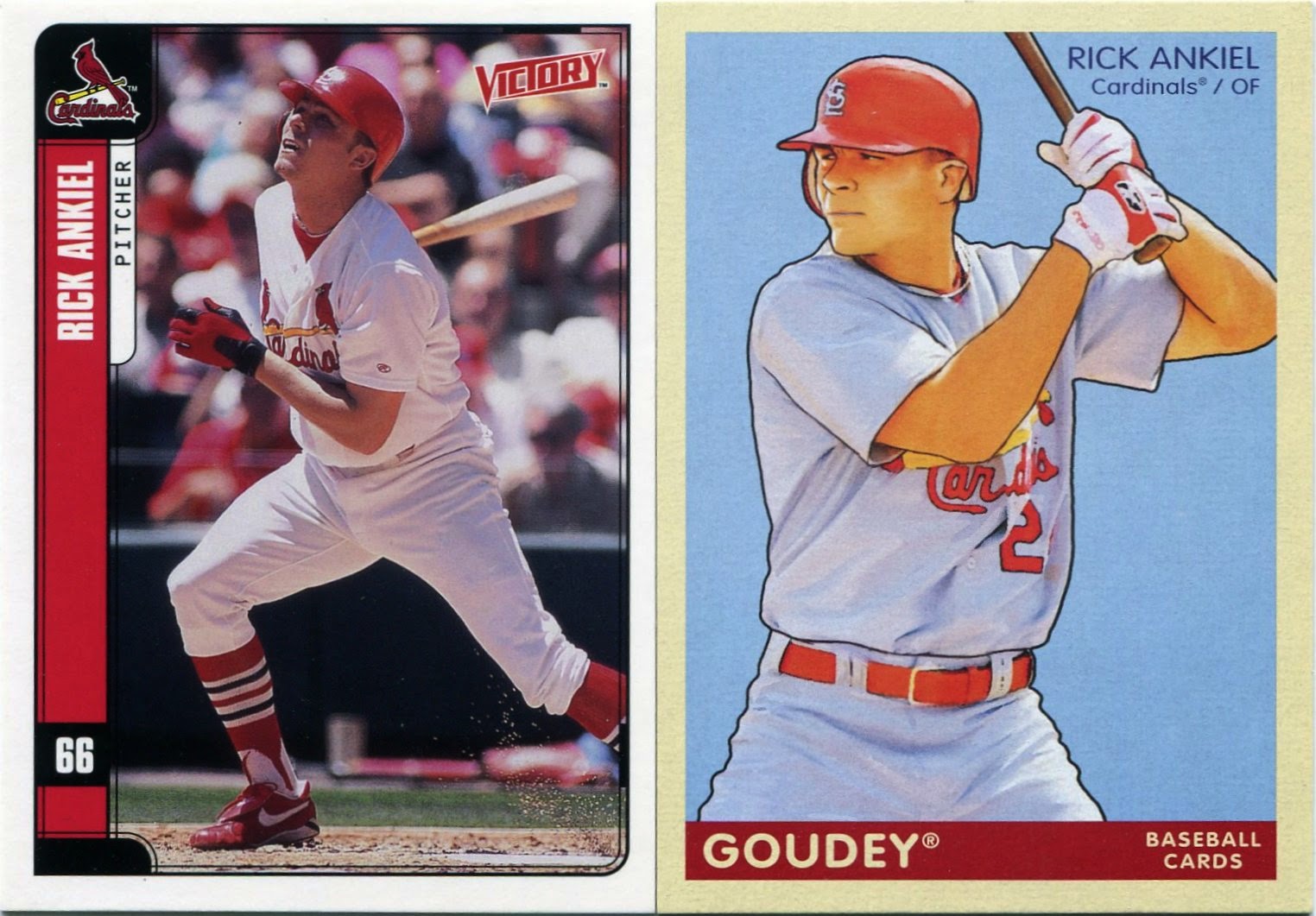 I probably own more cards of Rick Ankiel at the plate than any other pitcher in my collection. I find that strange, considering he was perhaps the game's biggest prospect in the late '90s.

Could you imagine if a guy like Jose Fernandez had a bunch of cards that featured him hitting? It just doesn't happen.

That's why I think card companies had something to do with Ankiel suddenly losing his control. They secretly wanted him to become a full-time hitter because it meant they could produce more game-used bat cards of his.

They got their wish.

The transformation of Rick Ankiel is still one of the more fascinating baseball developments of the past decade or so. 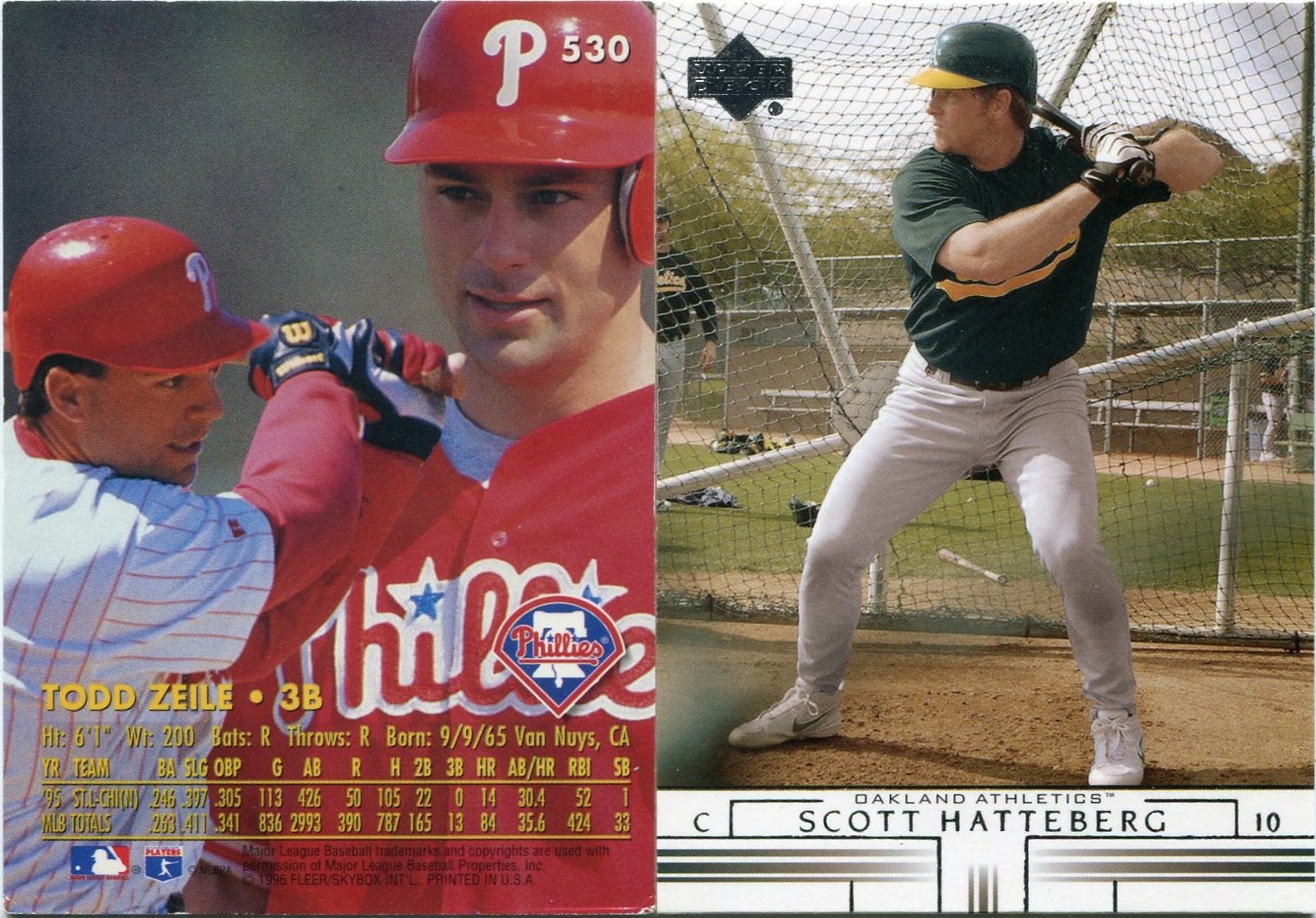 Without this secret cardboard society, there probably wouldn't be any Moneyball.

On-base percentage and at-bats-per-homer stats weren't exactly mainstream in 1996, yet a lot of Fleer-based cards from the mid '90s feature those very numbers on the flip side of every card.

Maybe Fleer is to thank for Billy Beane's fame and success. Perhaps the careers of on-base machines like Scott Hatteberg wouldn't have breathed new life without Fleer.

Had Fleer not come along, maybe we wouldn't be hearing all about Ultimate Zone Rating and OPS+ these days. 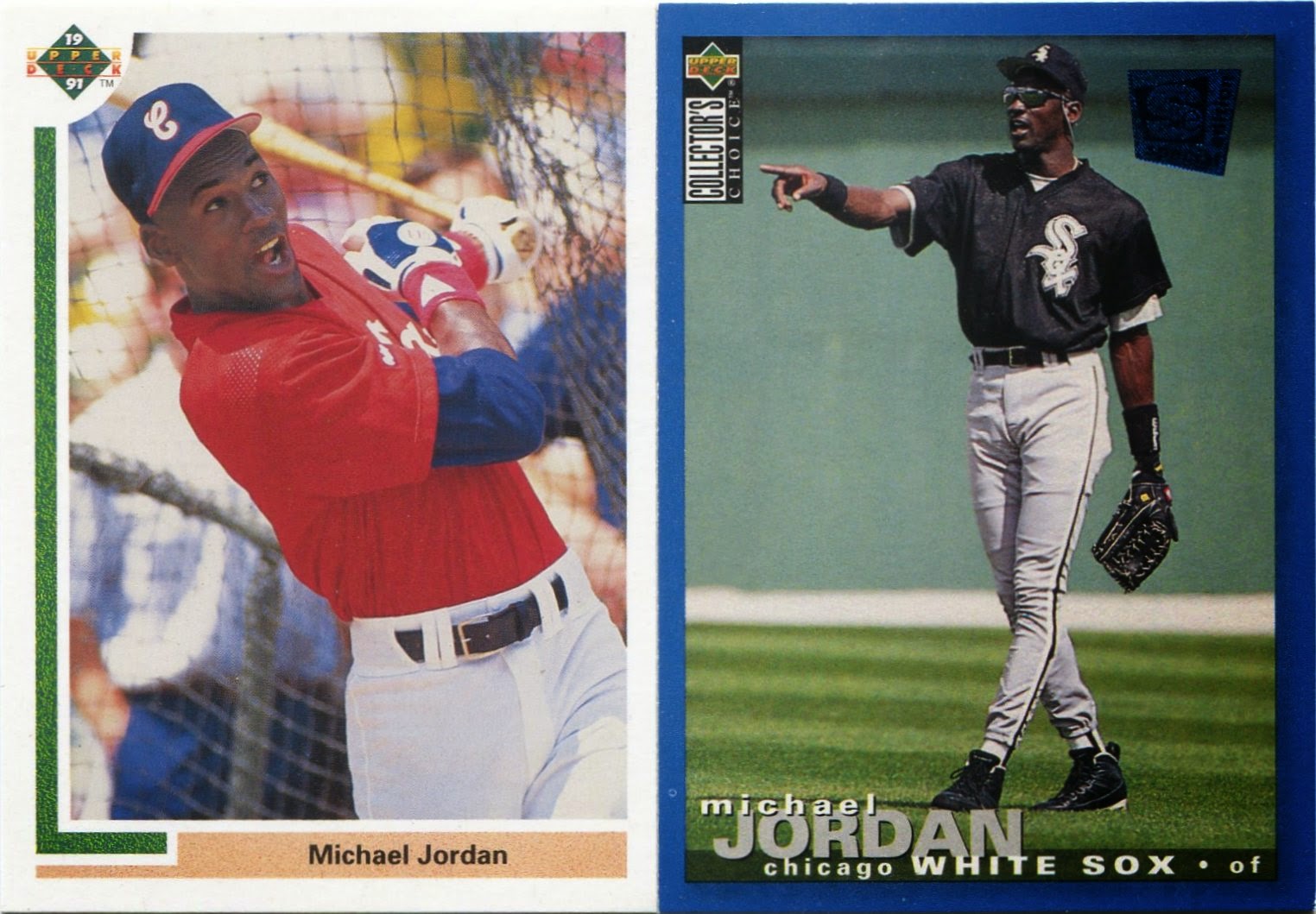 Originally, I think Upper Deck was just trying to have a little fun when they included a short-printed card of his in their 1991 checklist. After that, though, they saw an opportunity for big bucks and took it.

I believe Upper Deck met with Jordan behind closed doors in 1993 and offered him a huge contract to switch to baseball. They thought it would help sell packs of Collector's Choice and all their other brands.

Anything for a few bucks. 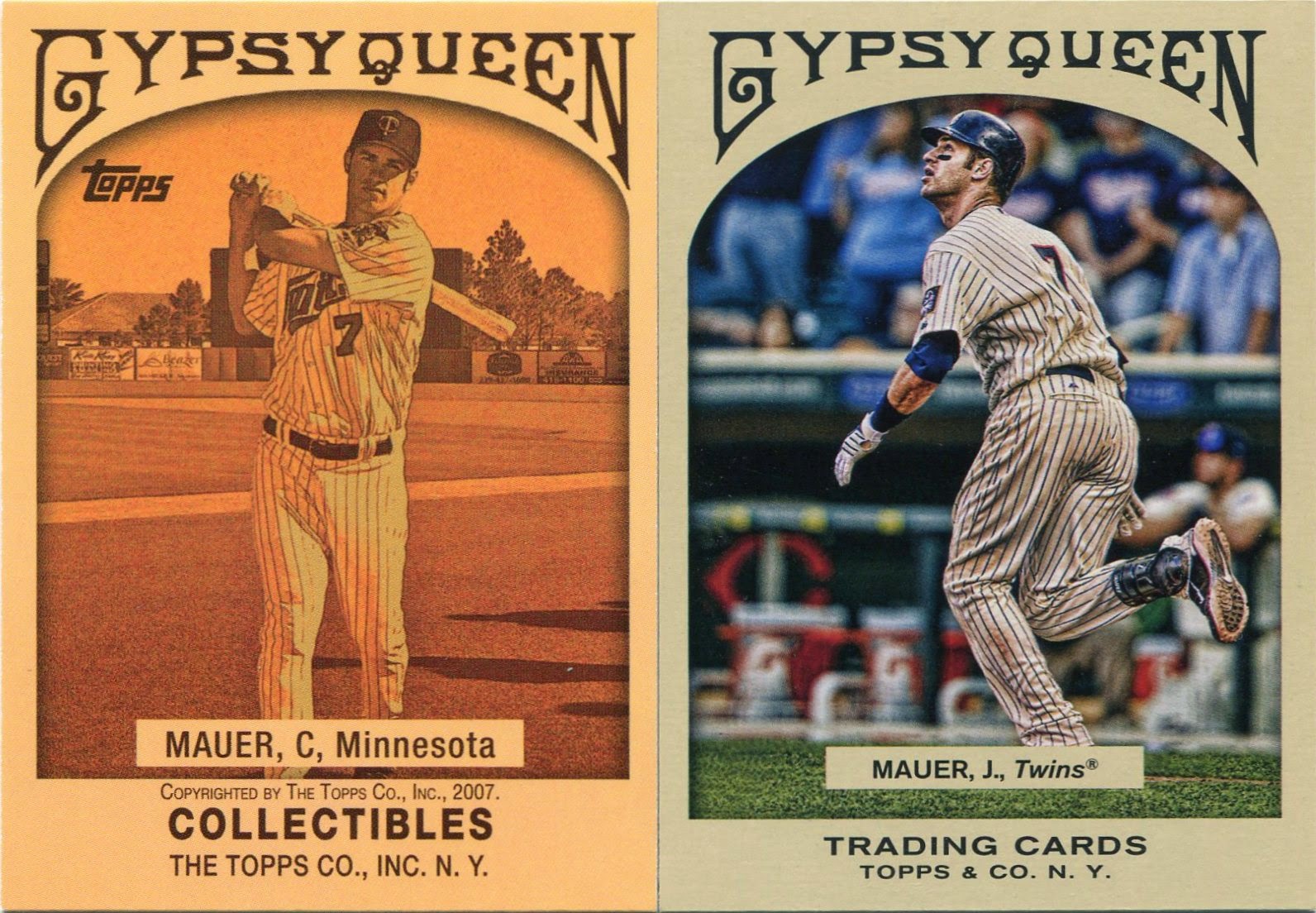 Topps had plans to make Gypsy Queen into a huge brand way before 2011.

They tried to casually slip a GQ-inspired insert into their 2007 Topps Wal-Mart series, hoping no one would notice.

They didn't count on the minds of conspiracy theorists like me. 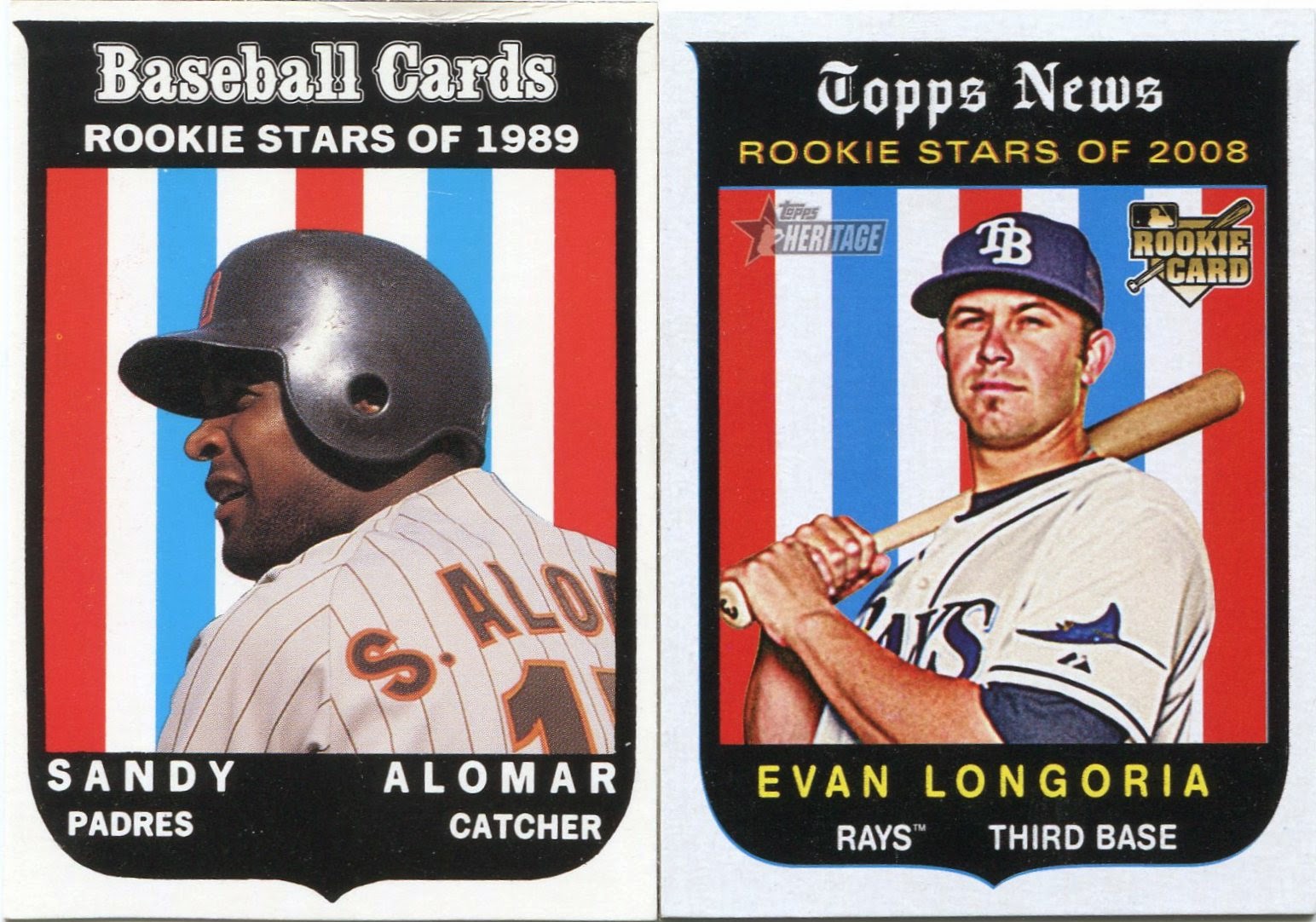 Finally, I think Baseball Cards Magazine was in cahoots with Topps.

They were the ones responsible for triggering this whole retro craze. No one gave a second thought to reproducing old designs until they showed up with their little cut-out giveaways.

Would anyone care about Heritage, Archives, Allen and Ginter, or all the other oldie sets on the shelves these days?

I don't think so. 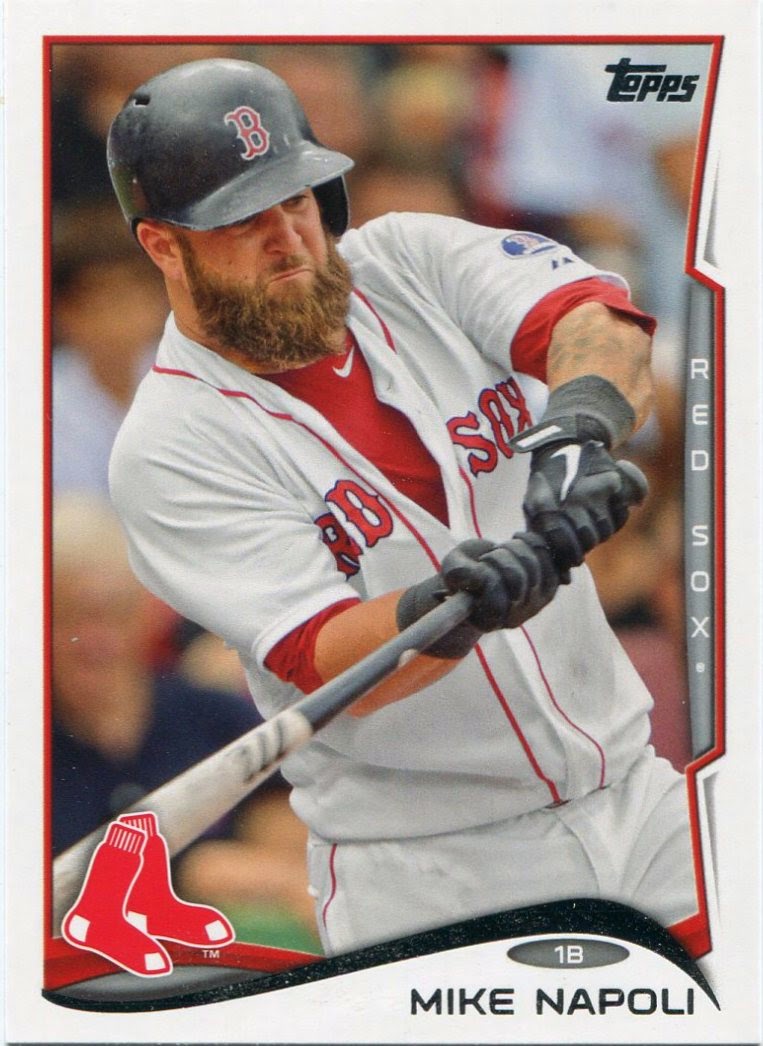 Is this whole facial hair thing just a conspiracy for Topps to start producing game-used beard cards in a couple years?

I wouldn't put it past them.

Okay, don't be fooled with this post. In reality, I'm about as far from a conspiracy theorist as you'll find. Everything I just posted can be explained by shrewd marketing techniques, rational thought, or merely just coincidence.

But I don't think I'm that far off on the whole game-used beard thing.

Imagine all the, "I hope that's beard hair" jokes.

Yes, my plan for world baseball domination will be complete when game-used DNA is delivered to me unsuspectingly by Topps... Mwahh haaa haaa haaa!

Great post. I'm a huge fan of conspiracy theories, so it's great that you've brought it into my favorite hobby.