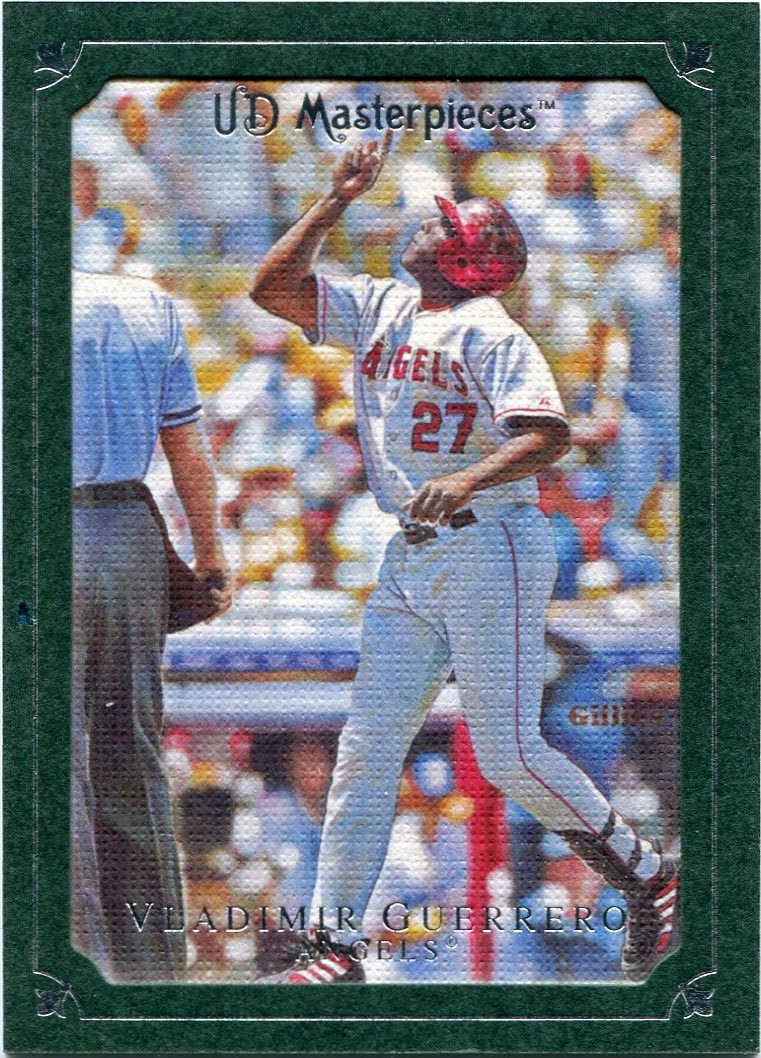 Until I joined the blogosphere, I had no idea so many Dodger fans collected baseball cards.

I distinctly remember being shocked by the sheer amount of them after discovering this place. Dodger fans everywhere.

Right now, I can probably think of at least six or seven different Dodger blogs. They easily have the widest fan base here in the blogosphere.

If you've been around here for any period of time, however, you probably already know that by now.

One common thread that my fellow Dodger bloggers seem to have is the fact that all the ones I've dealt with have been awesome traders.

I recently received a nice little batch of cardboard from my buddy Oscar over at the terrific blog "All Trade Bait, All The Time". I've lost track of the number of times we've traded.

The mayhem started when I claimed this beauty from Oscar after he featured it on his blog. It's black borders, UD Masterpieces, and Vlad all combined into one stunning piece of cardboard.

I wasn't about to let something like that slip away. 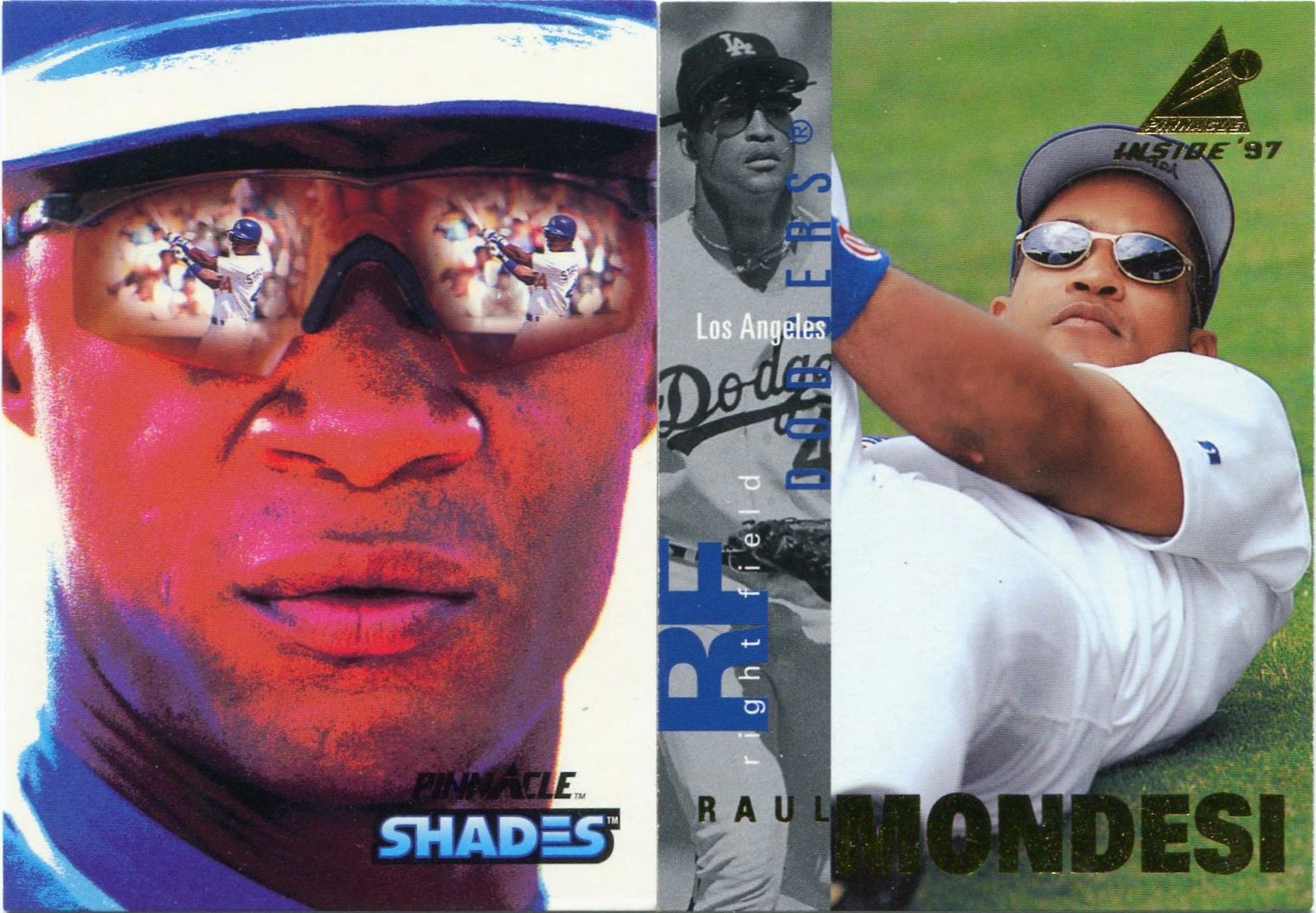 As you might guess, most Dodger fans slip a few cards of their beloved franchise into every trade package.

That's fine with me. From what I've seen around the blogs, there are tons and tons of terrific Dodger cards floating around out there.

These two sweet shades shots are just the beginning. 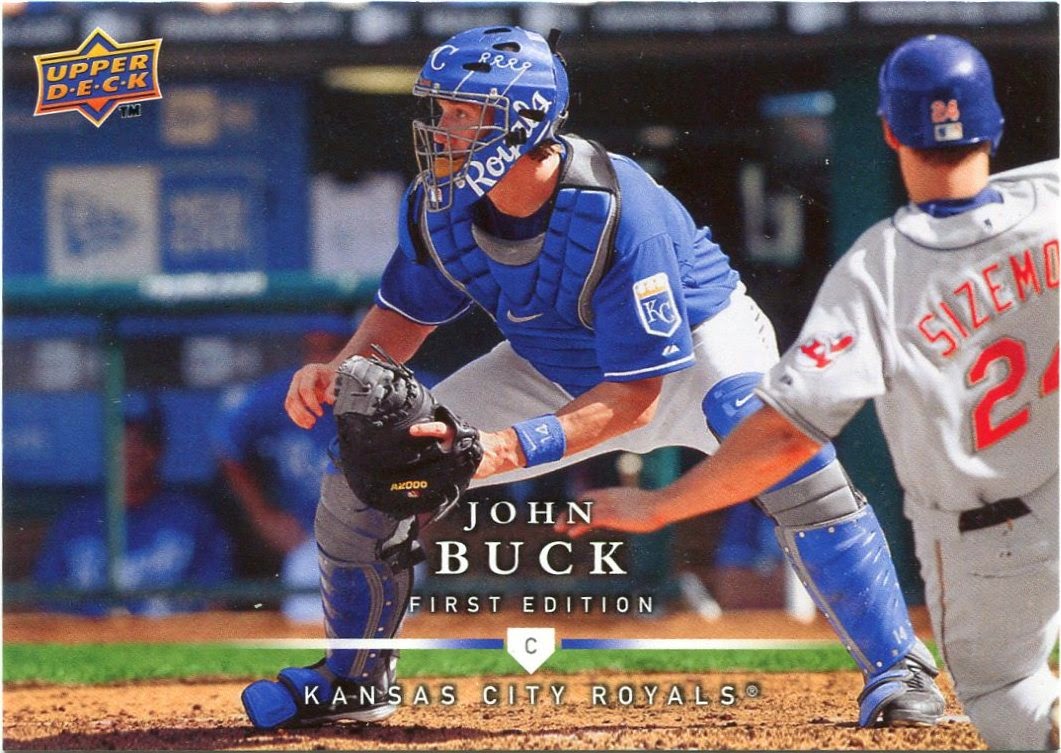 As shown by this great "play at the plate" issue, Oscar is a mini-collection pro.

I can't help but enjoy the Grady Sizemore cameo as well. 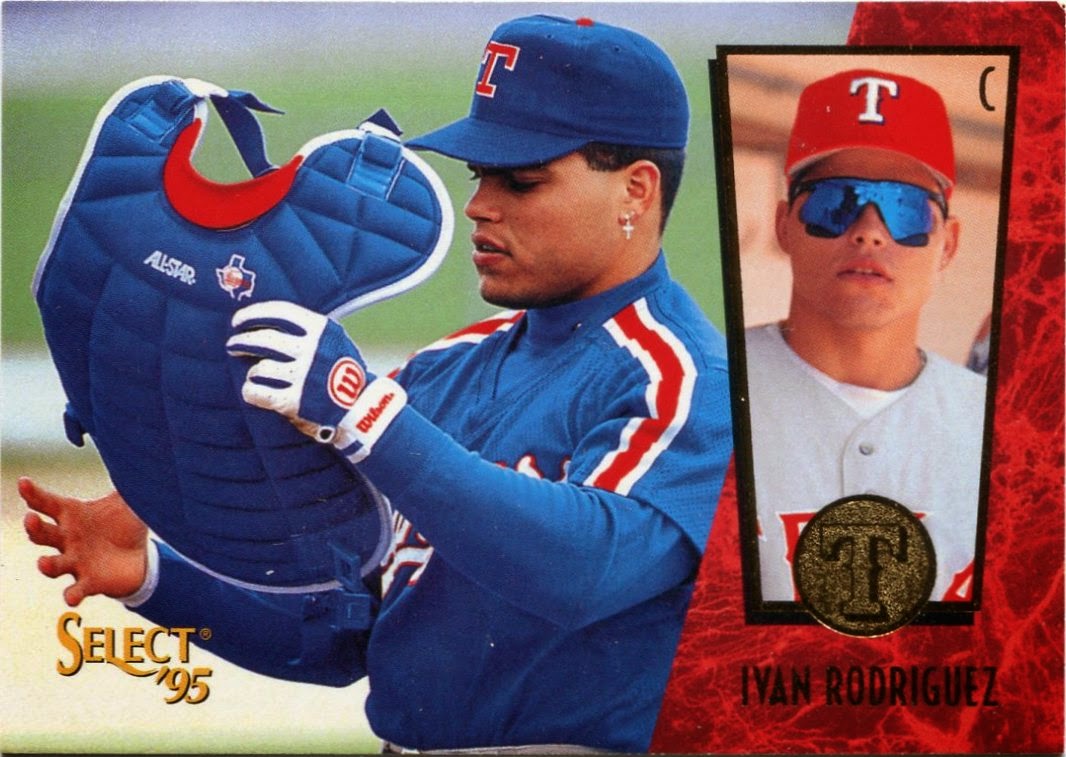 The last time Oscar and I traded, I expressed my opinion that pitchers had the best cards on average.

I think Oscar did his best to change my mind with this package. Between the Buck and this striking shot of "Pudge", I'm starting to change my tune a bit.

Perhaps catchers own the greatest cards of all. 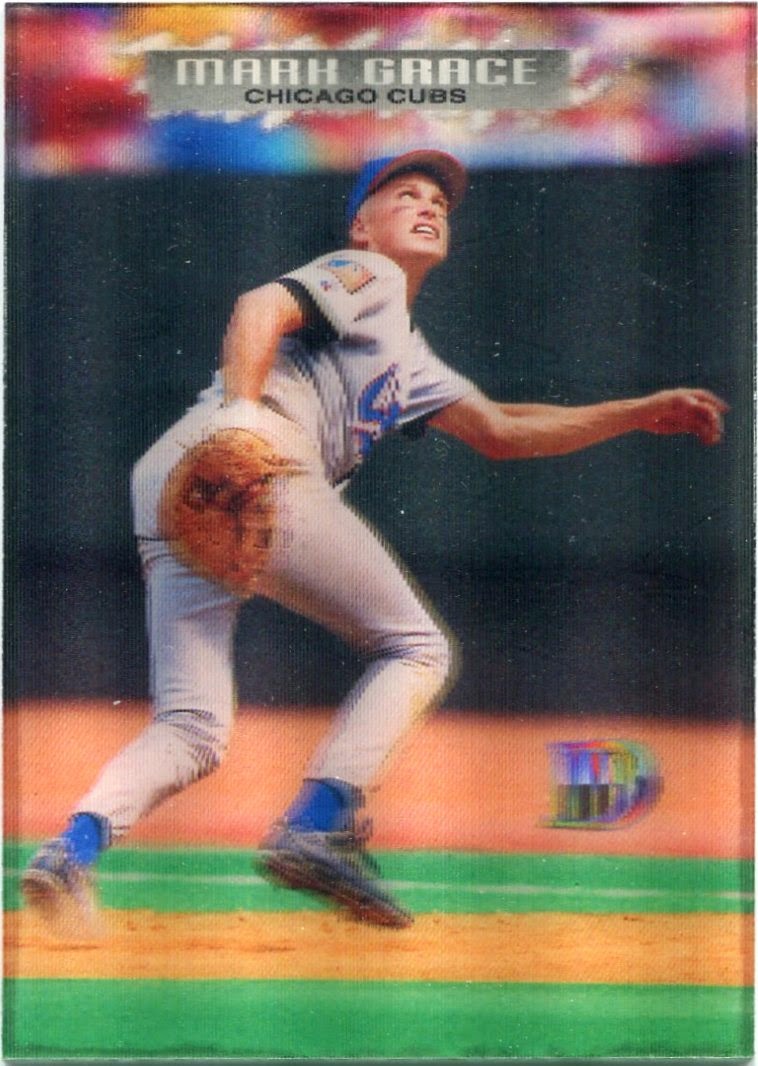 Aside from the Vlad, I think my favorite card of the lot was this spectacular 3-D Mark Grace.

That's all the better for me, as they've been easy finds in dime boxes over the years. Until Oscar came along, though, this Mark Grace card had eluded me.

It's great to have Dodger fans like him looking out for my collection. 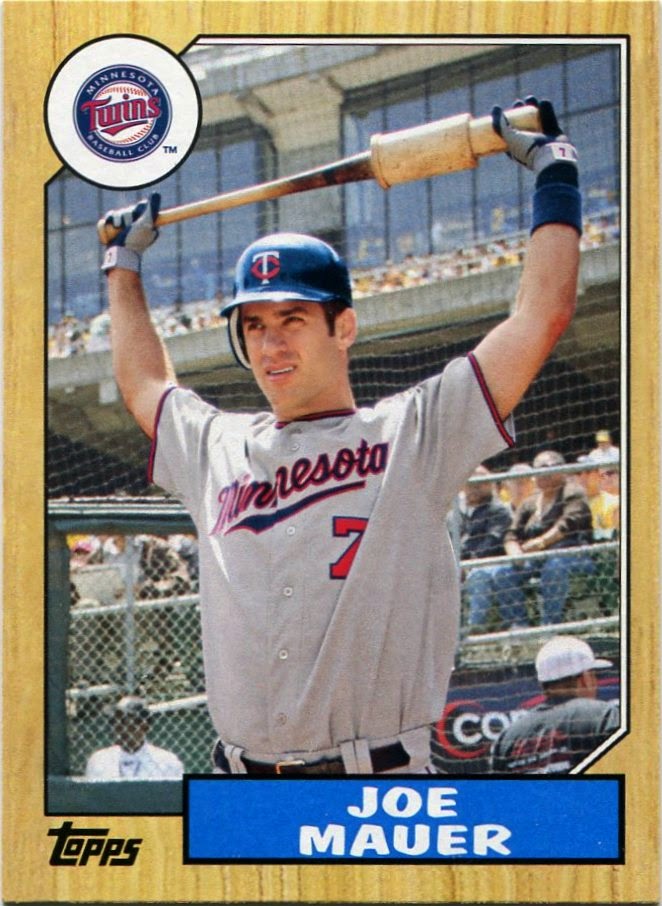 The fact that Dodger fans own the most blogs probably isn't news to you.

Well, then, I ask you this.

Which fan base has the second-most blogs in the blogosphere?

I've never actually gone through and counted, so I'm not at all sure of this one. If I had to guess, though, I'd have to go with the Padres.

It seems odd that a relatively small-market squad like the Friars would have such a strong blog following, but they do. I probably know of around four or five different Padre bloggers.

In fact, I completed my very first trade with one of them. Duff, author of the awesome blog "Bleedin' Brown and Gold", was nice enough to send along couple hits from my set needs page.

Among the lot was this serene on-deck shot of Mr. Joe Mauer. 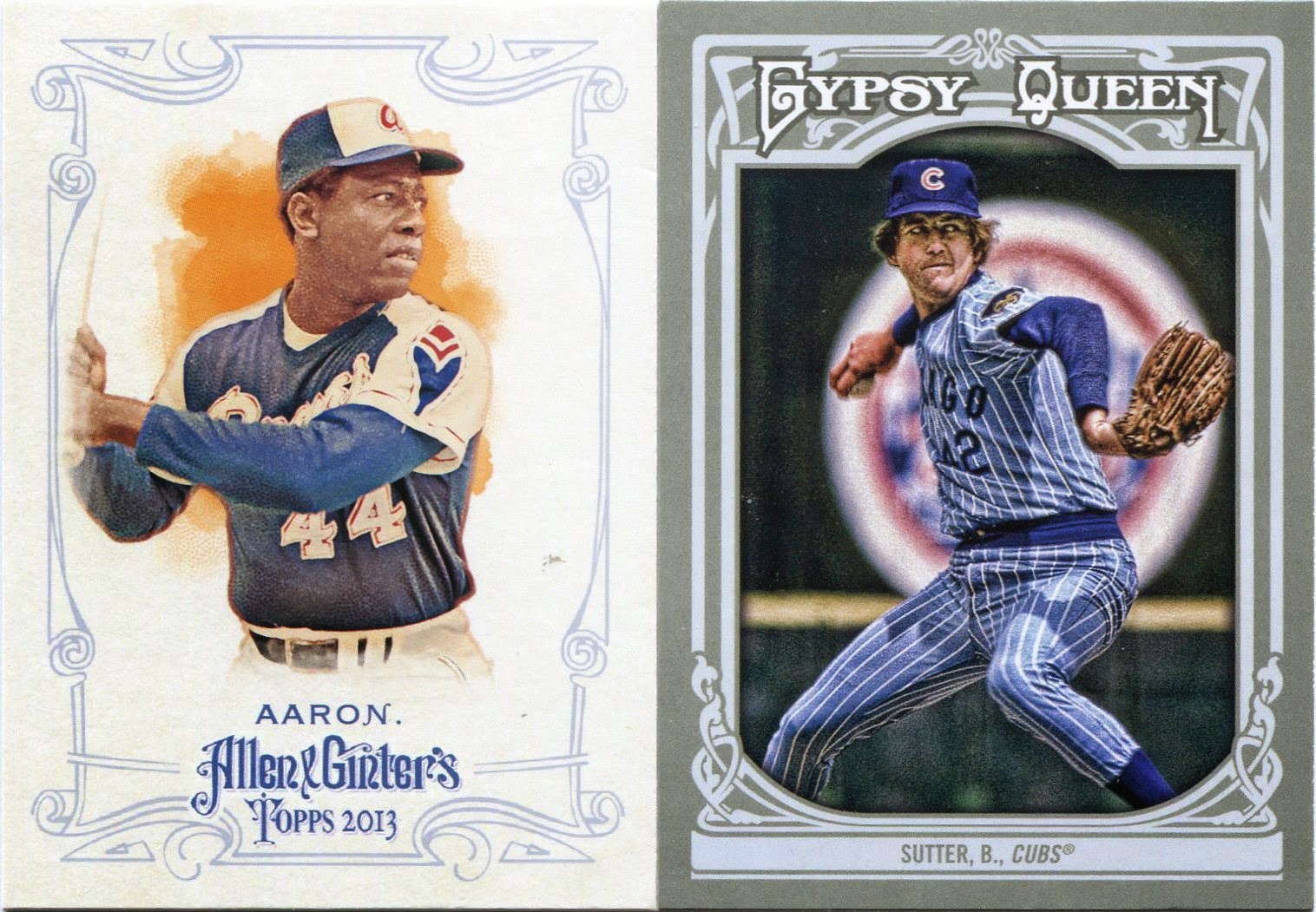 The Aaron is one of the nicer cards I've seen from 2013 A&G. The same can be said for the Sutter, which is a short-print from last year's Gypsy Queen checklist. 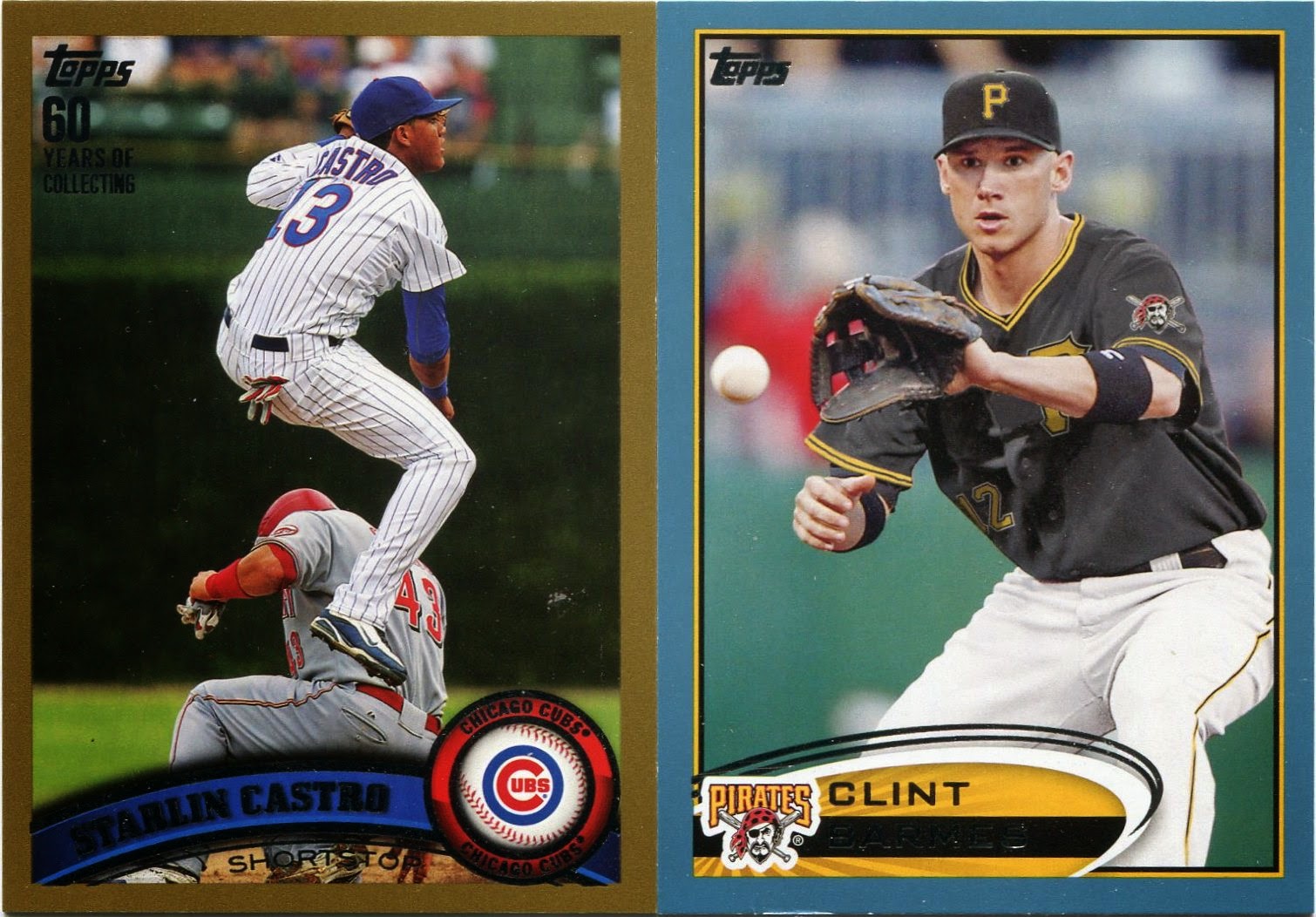 Also included was a nice stack of various Flagship parallels.

From what I can gather, people really want to unload some of these things. I've been amazed at the number of different people who have flat-out offered to send me as many different colored parallels as possible.

They'll always have a nice home in my binders. 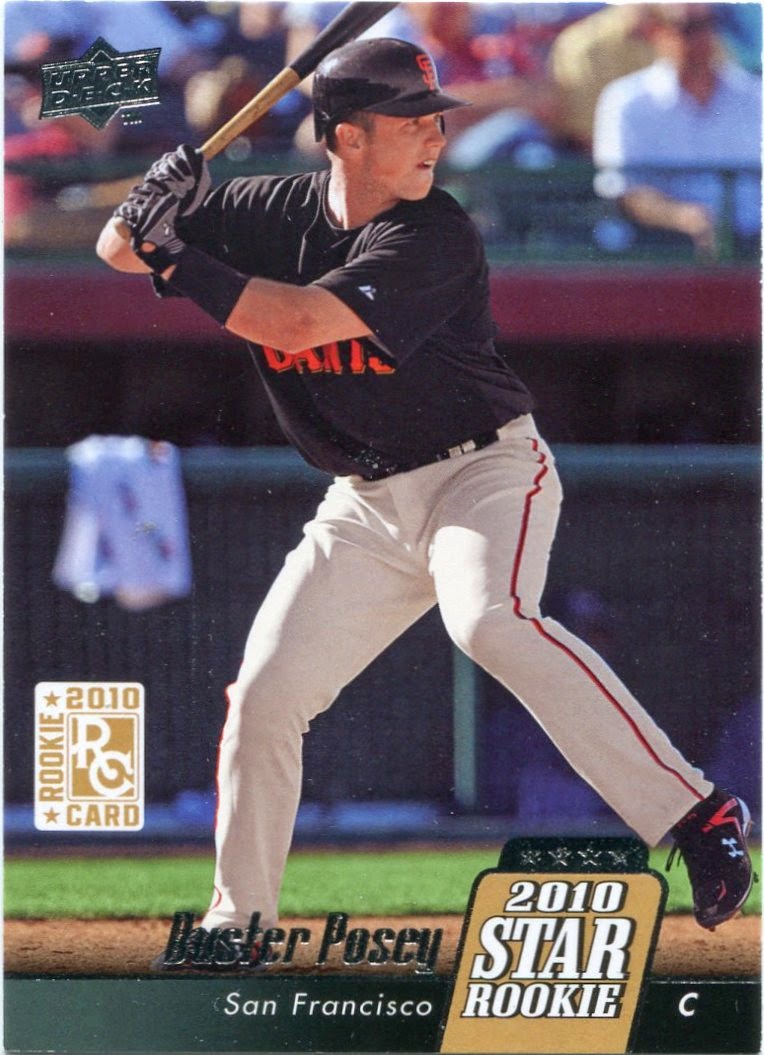 This was quite possibly the best card from Duff.

I was most flattered when he offered to include this 2010 UD Buster Posey rookie in the stack he was sending me. It's not the easiest card to come by, of course. That's usually true with big-name rookies.

I actually owned this card at one point. I pulled it from a box of 2010 Upper Deck I got for my birthday four years ago. But, for whatever reason, I ended up trading it. I don't even remember what I got in return.

Thankfully, Duff helped me correct that stupid mistake I made four years ago. Mr. Posey is back in my collection.

This time, for good.

Sure, the Dodgers and Padres may well have the biggest fan bases around here. That said, I think we can all agree on one thing.

No matter what team they may root for, everyone here in the blogosphere is awesome.
Posted by Nick at 3:54 PM

I like the fact that the fan bases are a bit cyclical as well. When I started blogging in January of 2011, Braves fans (now there are a lot less) had by far the most blogs with the Red Sox (now a whole lot less) second. There were still a few Dodger blogs, but I don't know if there were any Padres blogs (except Padrographs of course) my entire first year. In two years, I hope there will be another changing of the guard so we can start to move some Marlins or A's cards.

Wow. Why are we always on the same page? I was just wrapping up a spreadsheet to determine which teams are represented in the blog world. And, yes, it's all about us Dodger people, and the Padres. Must be something about the SoCal weather. Which makes it strange that there seems to be no Florida representation. (Or maybe attendance figures indicate that it's not strange at all). The Nationals were the only non-Florida team for which I found no obvious representative. Any Rays, Marlins of Nats people out there that you know of?

30-Year Old Cardboard is a Marlins fan, I believe. The Snorting Bull is mainly a Cardinals fan, but also a Rays fan.

If you count Fuji as an A's blog, I think there may well be a fan for every team in the blogosphere, as far as I know.

Nice. Thanks for the info! Glad all the teams are represented out there. Also glad there are plenty of Dodger guys out there to carry the ball for my Random A$$.

i think i've traded with a fan of every team except the nationals. curly w cards, i'm coming for you! and, i've got a package just about ready to send to you nick, so you can post again about how awesome dodger bloggers are!