An impulse buy: Back to school edition 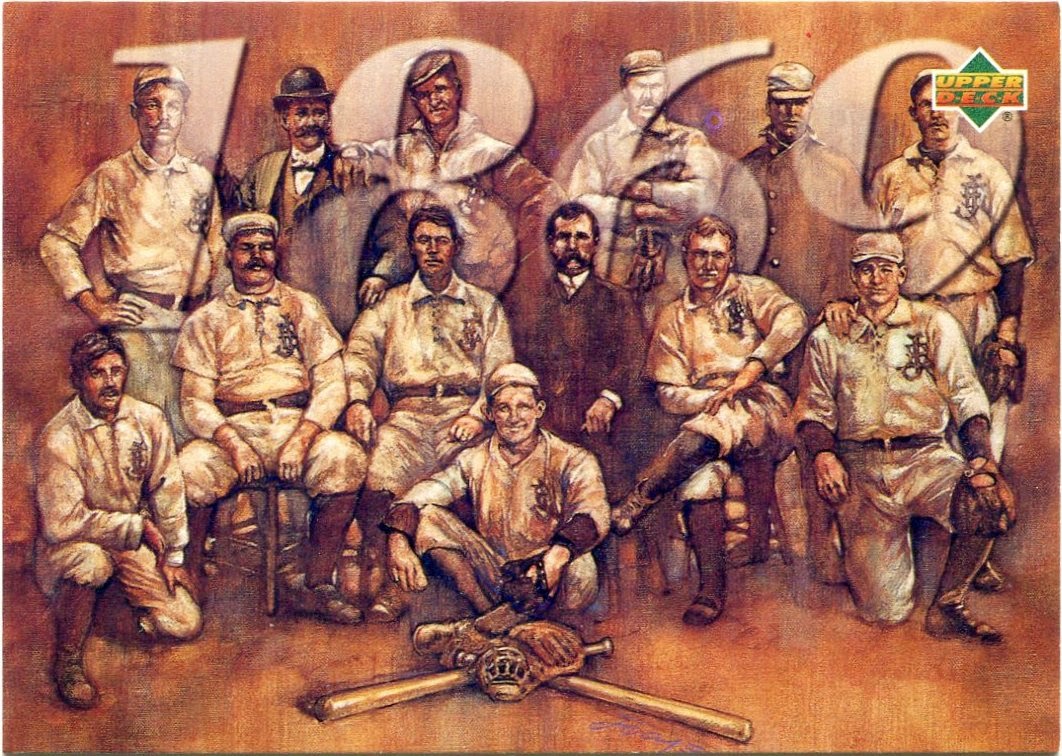 This year, I did something I never thought I'd do.

I enrolled in a summer class.

Part of my decision was thanks to the blogosphere. The class I'm taking is sort of a creative writing institute crash course. I've loved blogging about cards, but I have to say that doing so has opened me up to writing in general these last couple years.

The class started today, and it was a ton of fun. It's only a two-week course, but it's 9:30-to-3 every weekday for the next couple weeks. So, if my post count takes a slight dip, you'll know why.

To commemorate my inaugural venture into the world of summer classes, I decided to buy a few baseball cards. Hey, any excuse to pick up some cardboard is a good excuse.

In case you've missed these "impulse buy" posts in the past, they usually come during a particular point of weakness when I find myself jumping to Sportlots to buy a few cards. Just Commons is better for bigger purchases, but Sportlots is good for these little buys when I don't have much money.

The key is to find a seller with a large inventory and reasonable shipping prices. All the cards you'll see tonight came from the same person. And, except for the final card in this post, all cost a whopping 18 cents a piece.

That's certainly a steal for anything featuring the old Cincinnati Red Stockings. 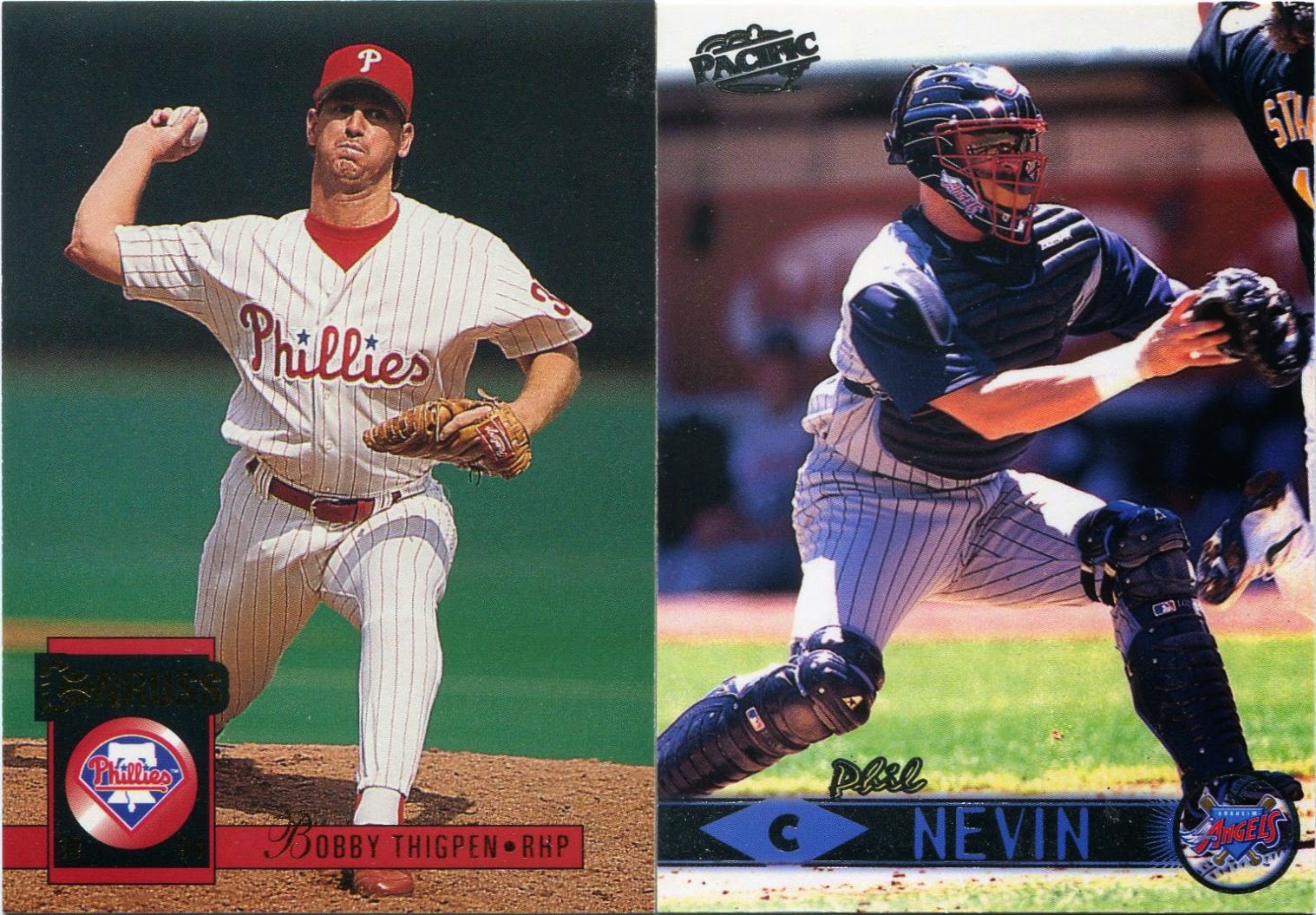 Though it may seem mundane to others, that '94 Donruss Bobby Thigpen is the only card I know of that features him as a Phillie. The former single-season saves leader pitched in 17 games for them in 1993.

Besides being a neat "play at the plate" shot, that Phil Nevin is one of the few cards that feature him as an Anaheim Angel. His tenure with the team lasted all of 75 games in 1998.

I would like to say that was the best Phil Nevin card in my latest impulse buy. 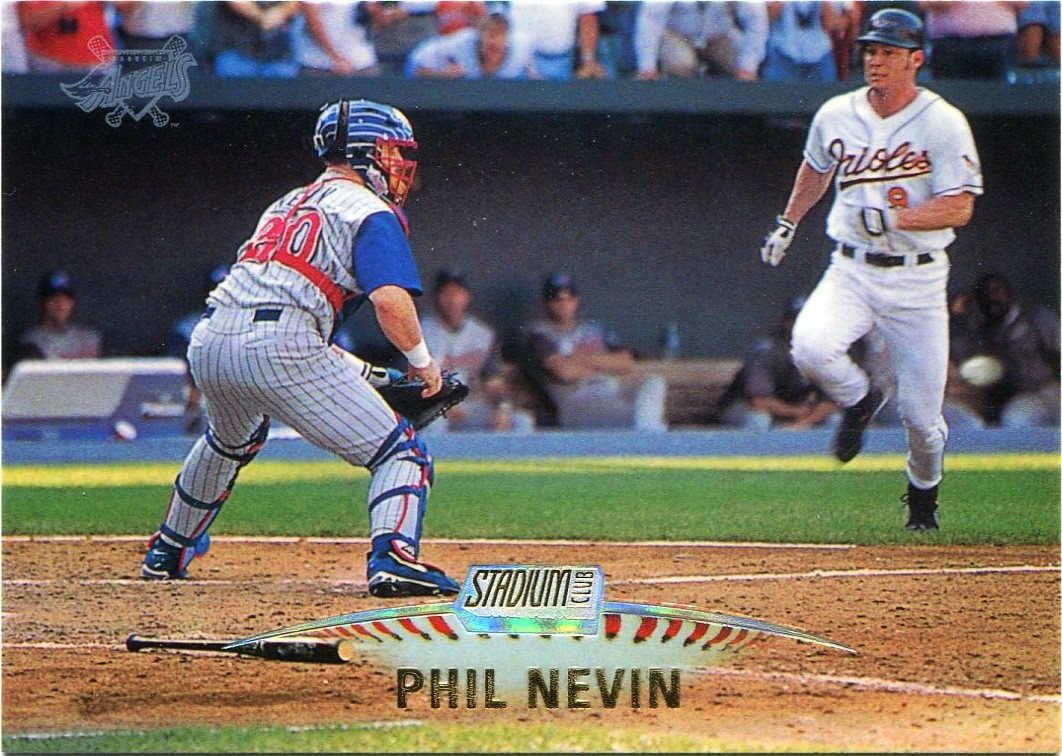 I fell in love with this card as soon as I saw it on one man's Angels blog not long ago. It resonated with me on so many different levels.

1) As I said before, there aren't many cards of Phil Nevin with the Angels.

2) That's a way more epic "play at the plate" shot than the aforementioned Pacific issue.

3) This shot was snapped just a split-second before Brady Anderson's card from '99 Stadium Club. I picked that one up earlier this year.

4) I'm pretty sure this particular photo comes from an exciting Angels-Orioles contest played on September 12th, 1998. The O's won, 3-2, with three runs in the ninth. Mr. Anderson scored the game-winning run on an Eric Davis single.

From what I can gather, that's the exact play you see developing here.

I haven't been that fascinated by a single card in a while. 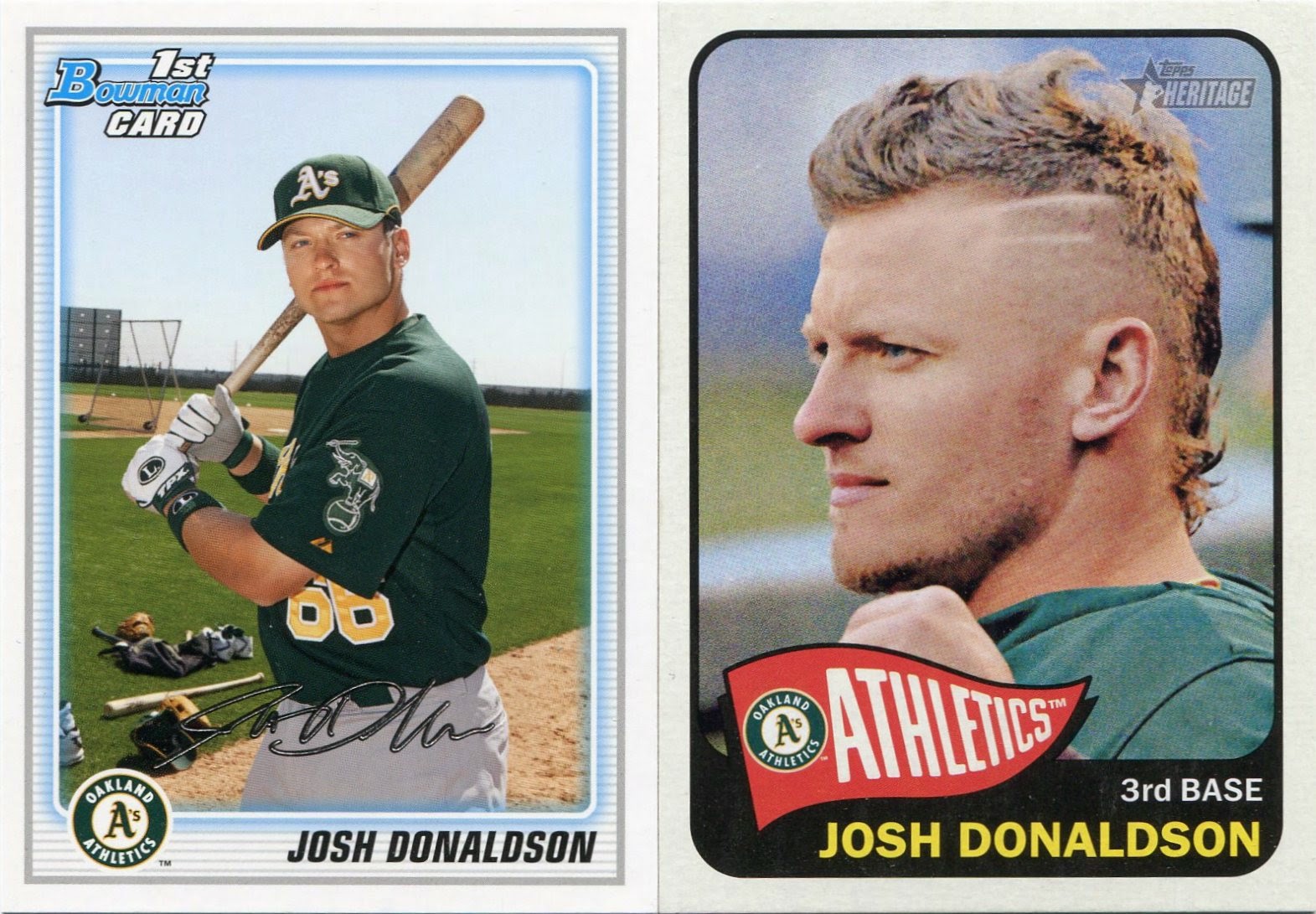 The A's have become my favorite non-Chicago ballclub these last couple years. Josh Donaldson is the face of that franchise. Why did it take me until now to start collecting him?

I'm not entirely sure. Better late than never, though.

The only thing I don't like about Donaldson is the fact that the Cubs let him slip away. He was sent to Oakland in the trade that brought Rich Harden to Chicago. 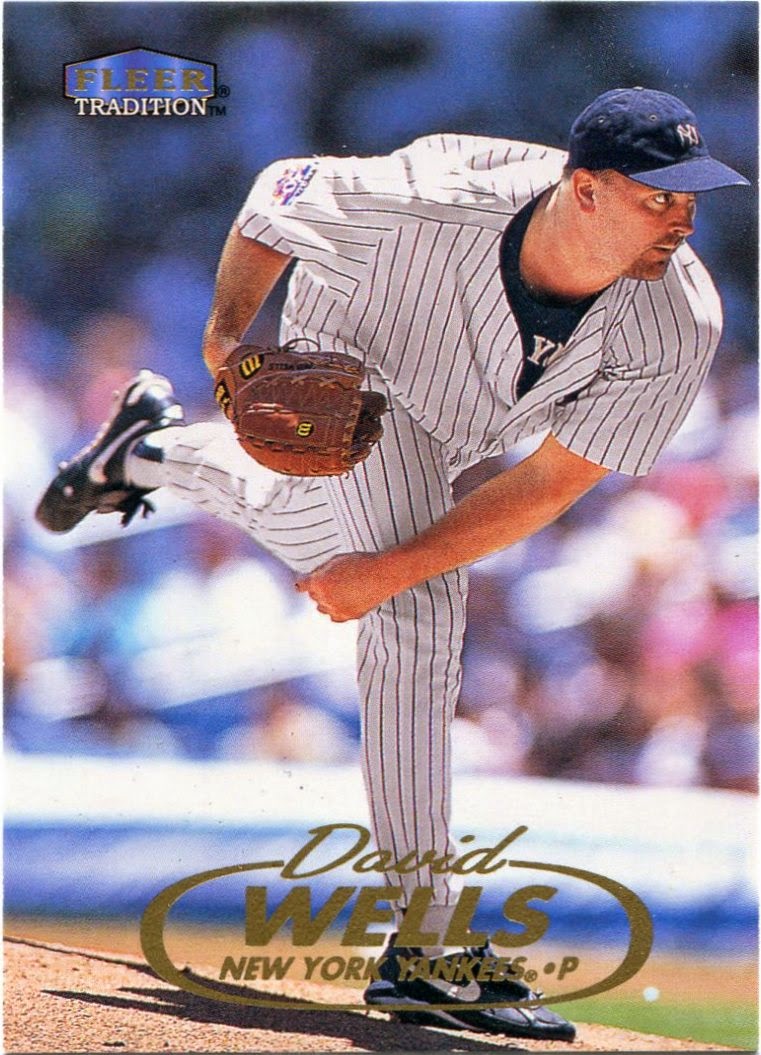 I saw this one on another blog a little a while ago, but I can't remember exactly where.

Like the Stadium Club Nevin, it was one of those cards that I absolutely had to have.

On the surface, this "Boomer" doesn't look like anything out of the ordinary. Until you take a closer look at that Yankees cap, at least.

As the story goes, David Wells took the mound wearing an authentic 1934 Babe Ruth Yankees cap in a game against the Indians on June 27th, 1997. Joe Torre made him take it off after just a single inning.

I'm almost positive that this image features the hallowed Ruth cap. That doesn't look anything like a modern Yankees hat. Since the game was in '97, it makes sense that it would appear in a set from the following year. This card, as it happens, hails from the 1998 Fleer Tradition checklist.

I'd say Fleer most definitely deserves a round of applause. 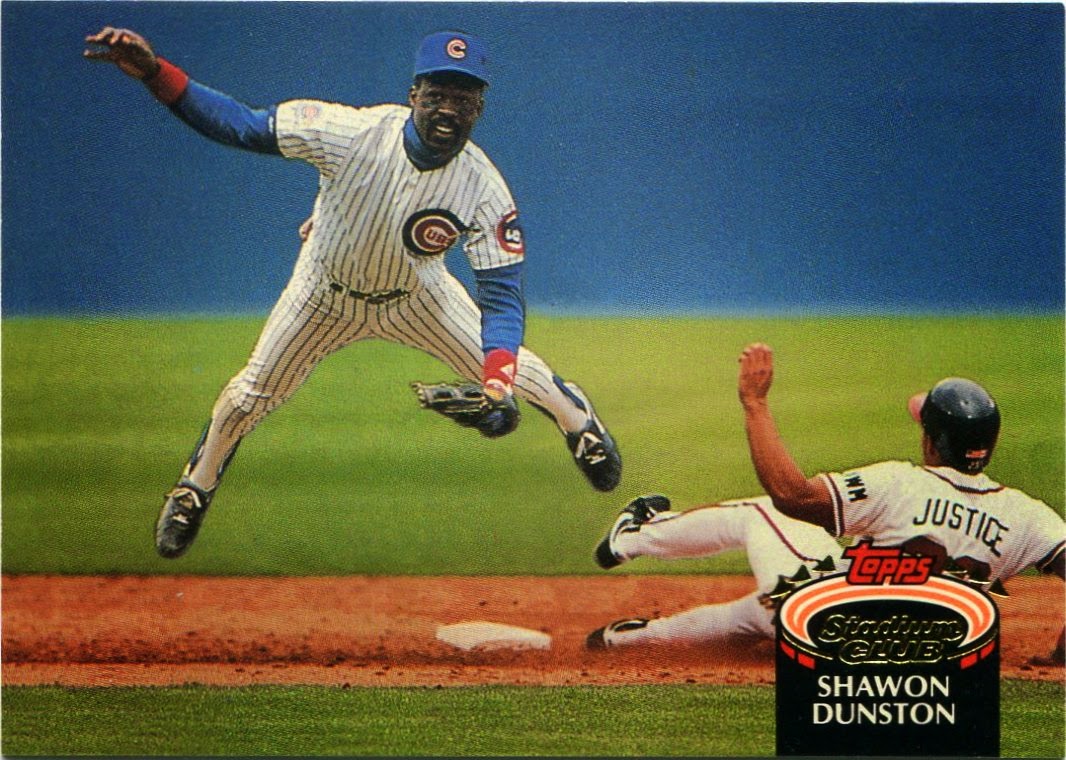 This is another card I've seen on quite a few other blogs.

At some point, I figured enough was enough. I needed to have this Superman shot of Mr. Dunston in my collection.

It's one of the better "double dips" out there. 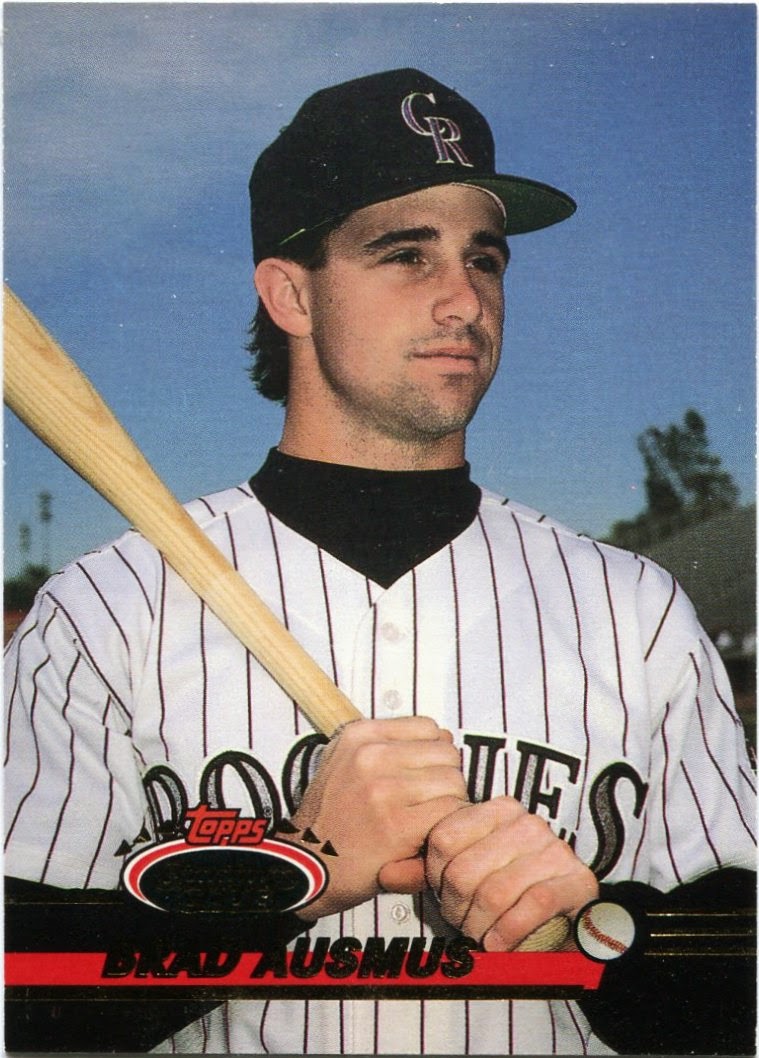 I've had my eye on this one for a while. One of Brad Ausmus's more obscure claims to fame is the fact that he was featured on two "zero-year" cards.

After being drafted by the Yankees, the current Tigers manager was taken by the Rockies in the 1992 expansion draft. He'd be traded to the Padres before ever playing a game in Colorado.

As far as I know, this is one of only two cards that feature Ausmus with the Rockies.

It's always nice to add a new "zero-year" piece to the binders. 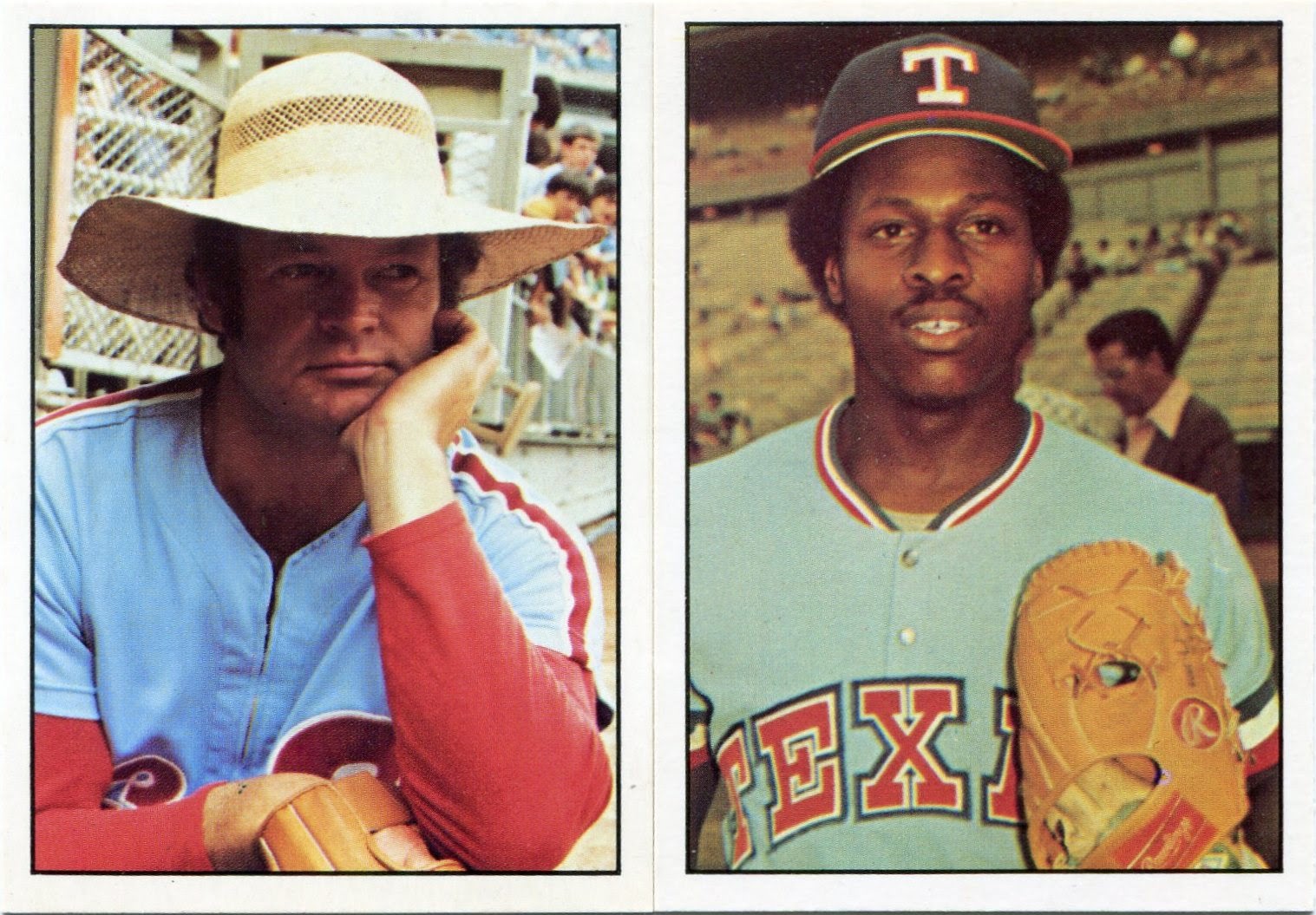 I actually had a lot more of these in my cart at first, but then my weak budget forced me to scale back a bit. Guess I'll have to save the others for my next purchase. I'm sure most of you know that feeling.

In the end, I settled on a trio of SSPCs. I'm an unofficial Lenny Randle supercollector, so I had to have the one on the right.

On the left, however, is a card I bought purely for laughs. I can't say I've ever heard of former Phillie Joe Hoerner, but that is one goofy hat he's wearing there.

It's good to see guys that don't take themselves too seriously. 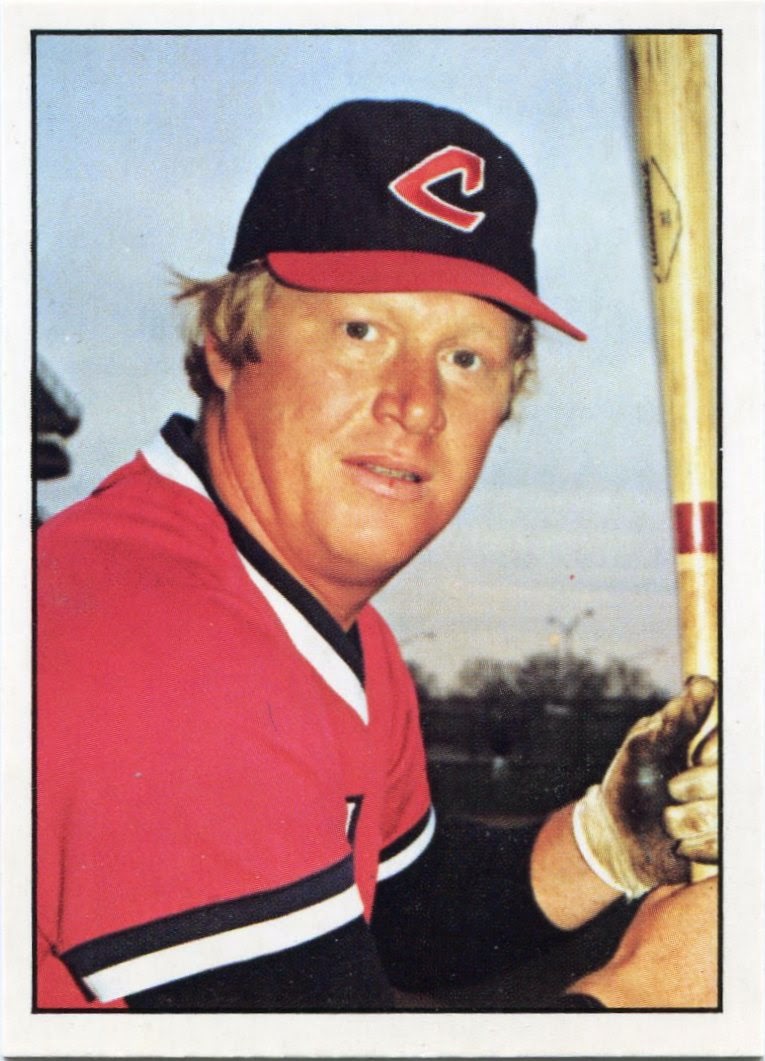 This was by far the most expensive piece of my latest impulse buy.

Fifty cents for anything of Boog Powell is still a steal to me. Especially one that features his forgotten stint in Cleveland.

Seeing him in those awful Bloody Mary Indians jerseys from the '70s has never looked right to me.

Of course, that makes me like it all the more.

I'd say it made for a fitting end to my latest impulse buy. Who knows? Maybe I'll be able to quell my cardboard impulses one of these days.

Or maybe I should just come to grips with reality.

There's always another impulse buy to be made.
Posted by Nick at 6:47 PM

First of all, Boog is NOT forgotten in Cleveland !! How COULD you forget a man of his stature in that red uniform ! Good luck on the summer school, that should be interesting. Now I have to have the card at top of your post, I graduated from HS in 1969 ! With my love of baseball history I'll be searching for that one.

Where is that Red Stockings card from, exactly? I don't recall ever seeing it before, but I consider myself quite knowledgeable about (major) Upper Deck's art cards.

Sspc cads are great. Good move on the summer class

Hoerner was actually one of the better relief pitchers of the late '60s. One of those names that gets forgotten unless you collect cards... which is one of my favorite things about collecting cards. And that IS a sweet one.