Wes does it again 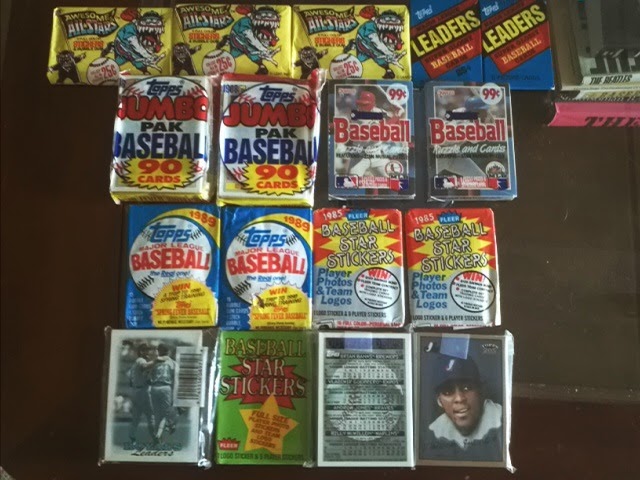 It's easy to develop a distinct personality here in the blogosphere.

There's the Tim Wallach Guy, for instance. Or the Griffey Guy. Perhaps you've even heard of the Night Guy. Those particular Guys are just the tip of the iceberg.

For a while, I knew Wes of the terrific blog "Jaybarkerfan's Junk" as Contest Guy. He always seemed to be giving cardboard away.

He started shifting nicknames after that. At one point, he dropped dozens and dozens of PWEs on me in the span of a few days. As you might guess, I soon came to know him as PWE Guy after that.

As of late, though, I noticed he'd been dropping mounds of flat-rate boxes on people. It didn't take long for one of them to wind up on my doorstep.

Wes, a.k.a. Flat-Rate Box Guy, managed to put together an awesome mix of unopened packs and random needs in this flat-rate box.

I was in cardboard heaven. 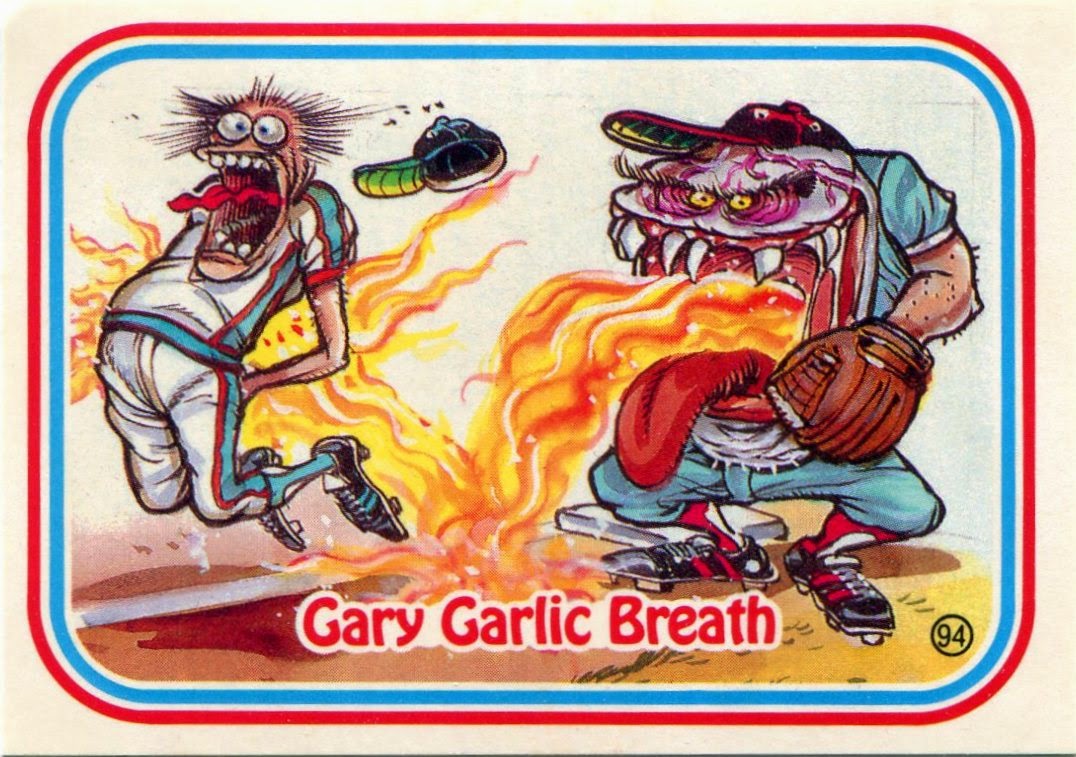 He started out with a few zany "Awesome All-Stars" packs.

These were completely new to me. As you might be able to tell from Gary Garlic Breath here, they're not really meant to be taken seriously. Think Wacky Packs for baseball.

They even came with gum. 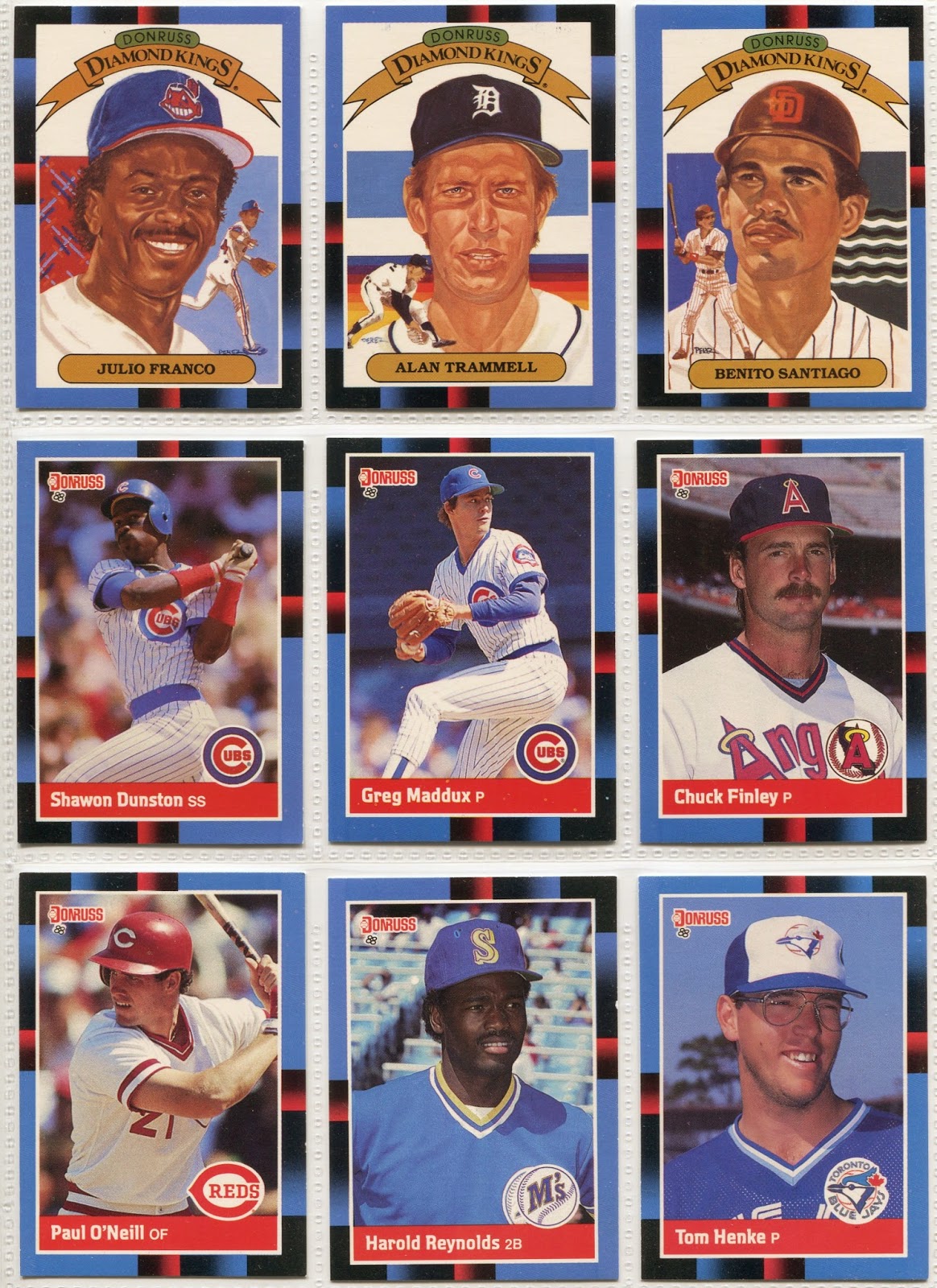 Wes tossed in a few 1988 Donruss fat packs as well.

Even though I may have more '88 Donruss than I know what to do with, I must say that opening a couple packs of them was still pretty fun. Pulling cards of stars like O'Neill and Maddux was a thrill.

I doubt you'll ever see another page of '88 Donruss on this blog again, though. 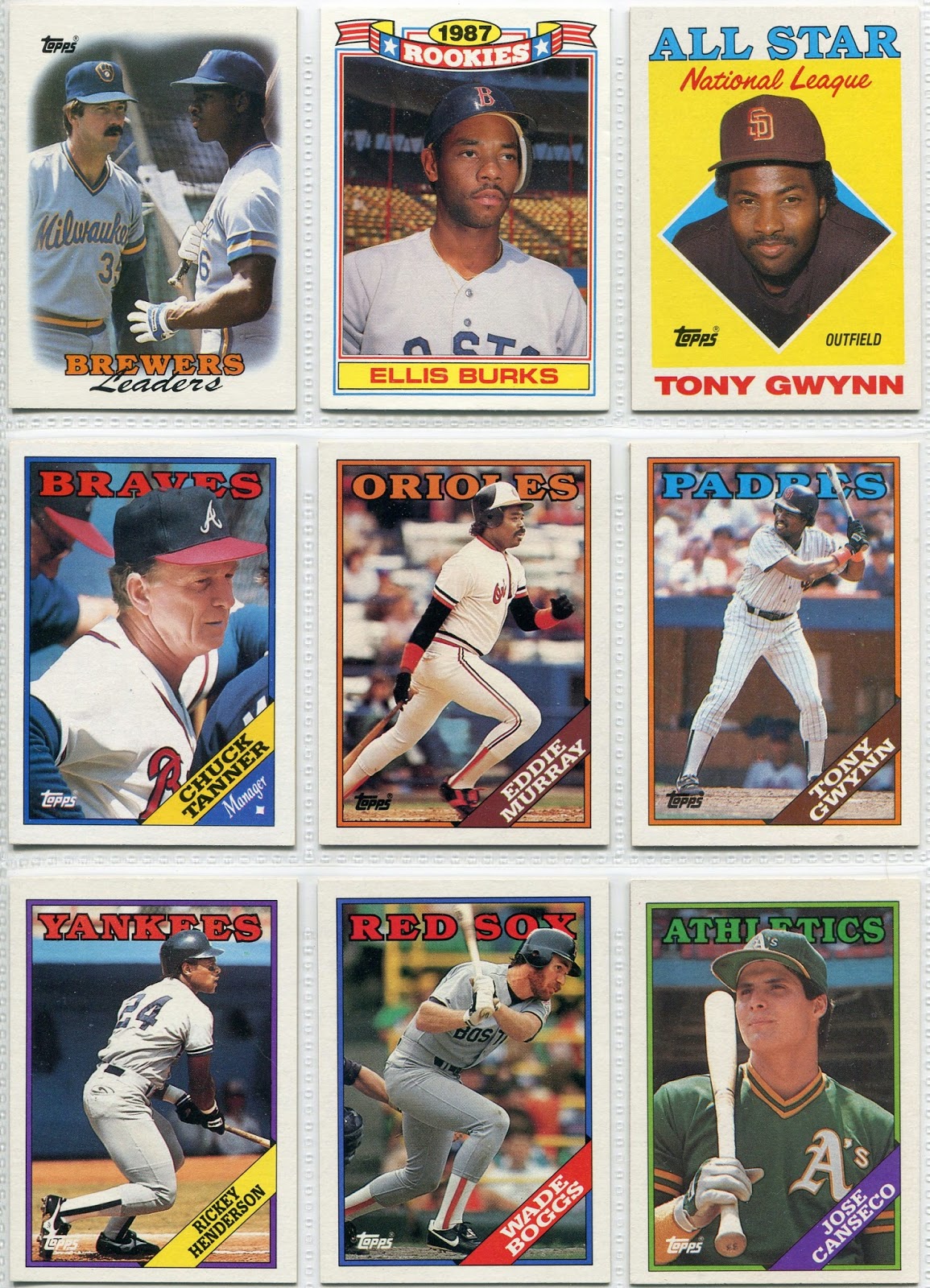 I'm rich! I'll be able to pay my college tuition with those! 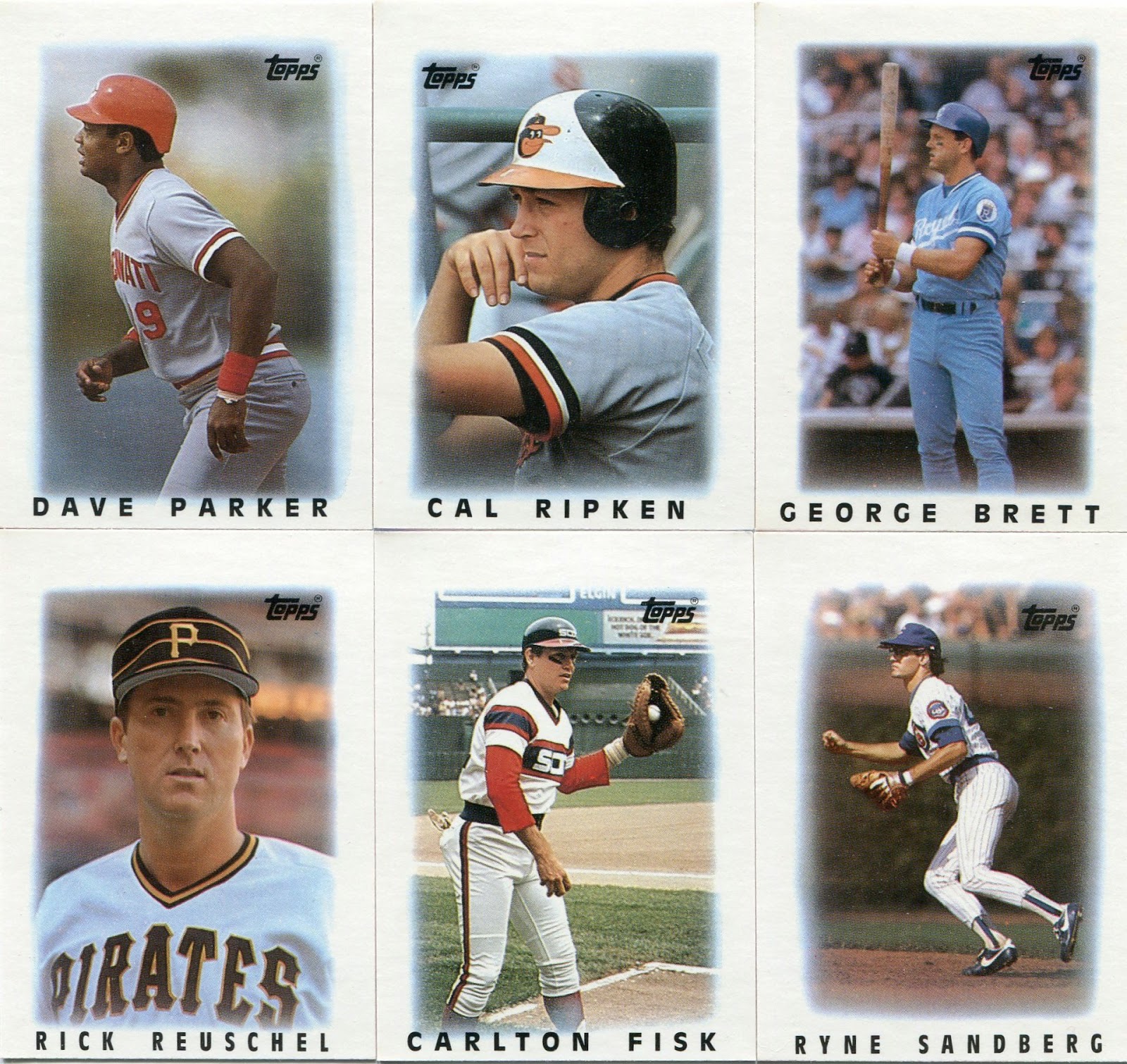 You can see a couple wrappers from these 1986 Topps Leaders in the top-right corner of the shot at the top of this post. The first one I opened was amongst the most star-studded pack I've ever seen.

You're not going to find many packs better than that. 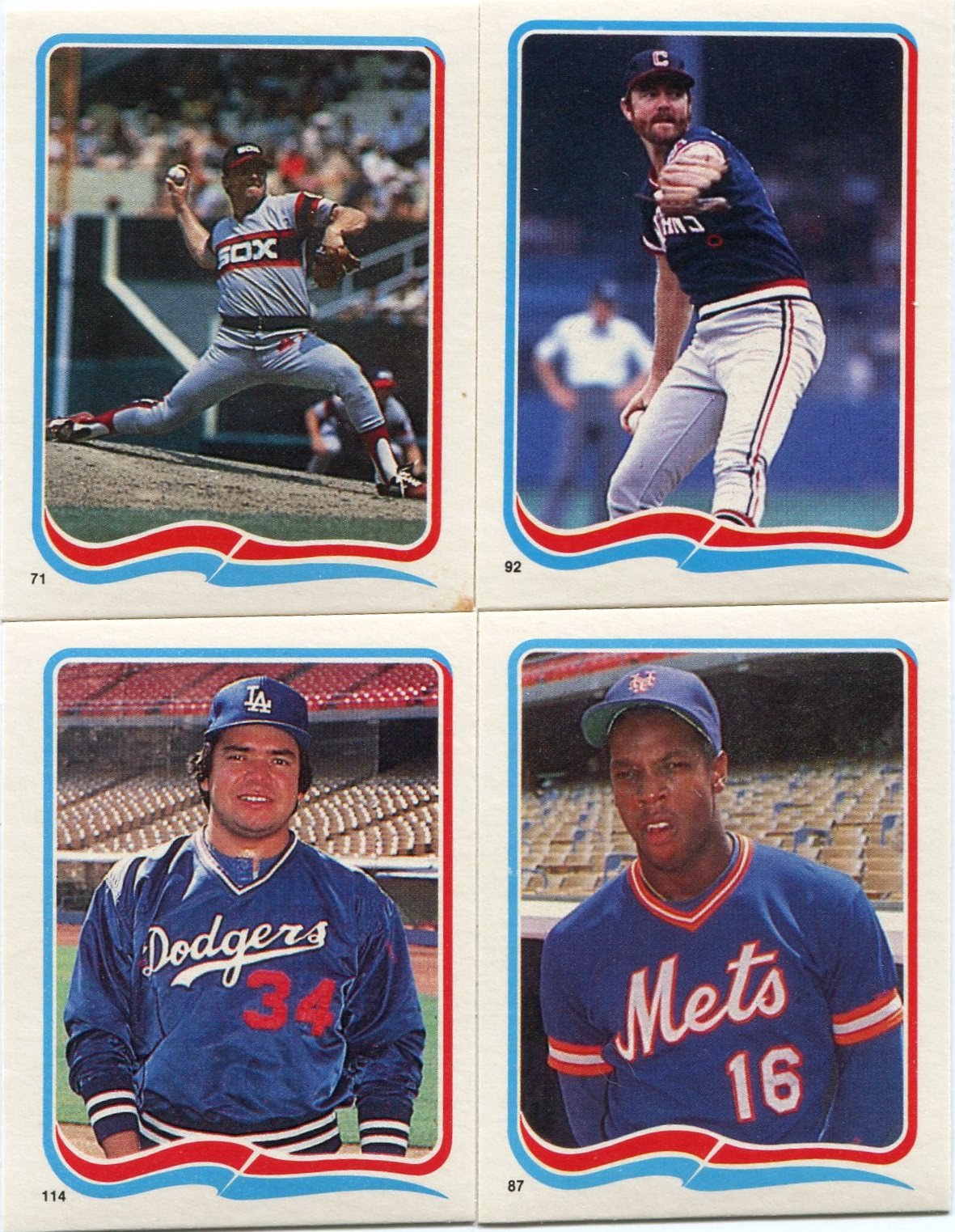 I don't think I'd ever seen these before Wes came along. These are smaller than most minis, and they test my binder OCD quite a bit. I've decided that extreme minis like Topps Micro or those '90s Cracker Jack singles are too small to put in a regular binder page.

These Star Stickers are right on the binder border. In the end, I decided they're just big enough to be binder-worthy.

I think it was the right choice. 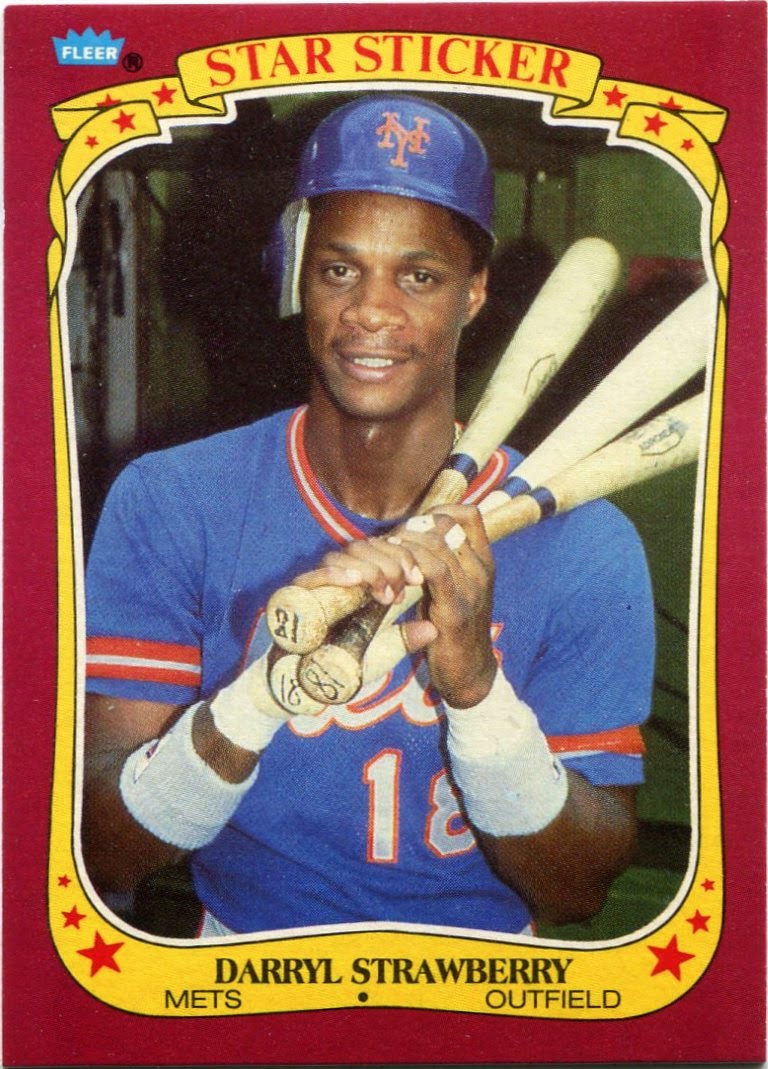 Thankfully, my binder OCD didn't have to be tested by the 1986 Fleer Star Sticker pack Wes sent.

These are beautiful regular-sized oddballs. There's little doubt that the best of the bunch was this sweet multiple-bat shot of Darryl Strawberry.

That sent the unopened pack portion from Flat-Rate Box Guy out with a bang. 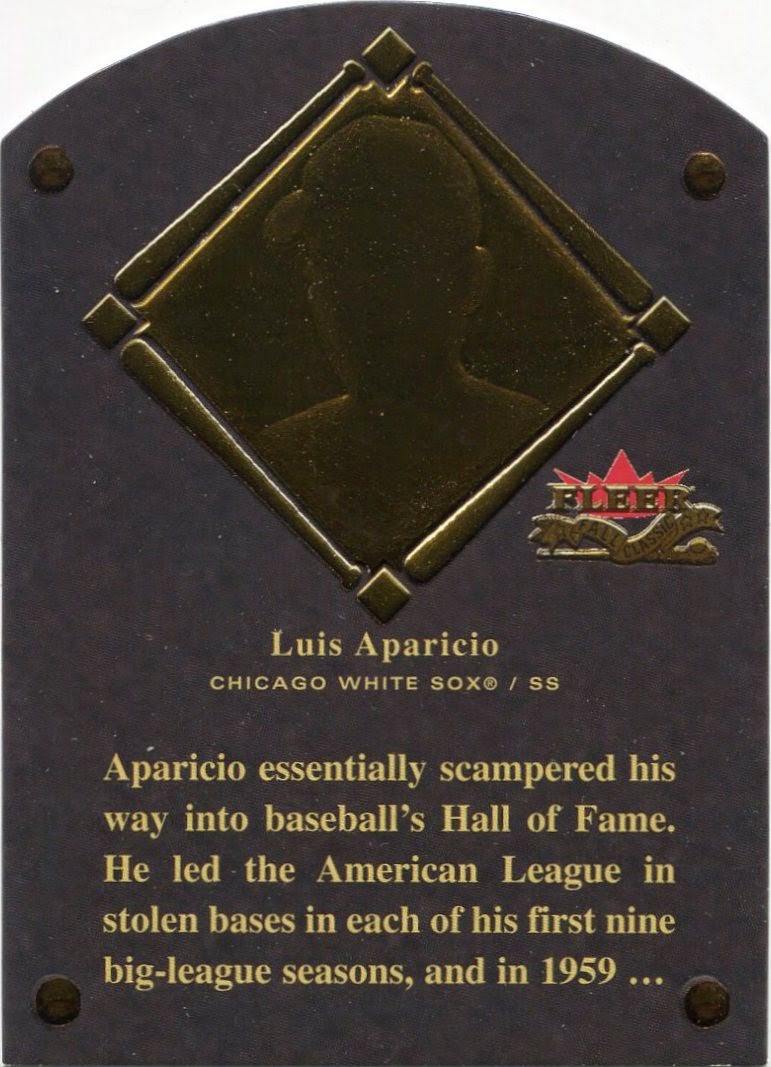 In the photo at the top of this post, you might notice a pair of team bags in the bottom-right corner.

Though the packs were a blast to open, the team bags were what first caught my attention from this box. As I found, Wes filled them up with specific hand-picked cards tailored to my needs.

Things kicked off with this neat HOF plaque insert of Luis Aparicio. Since "Looie" was inducted into Cooperstown in 1984, this card is fittingly limited to 1,984 copies.

Believe me, the scan doesn't do it justice. 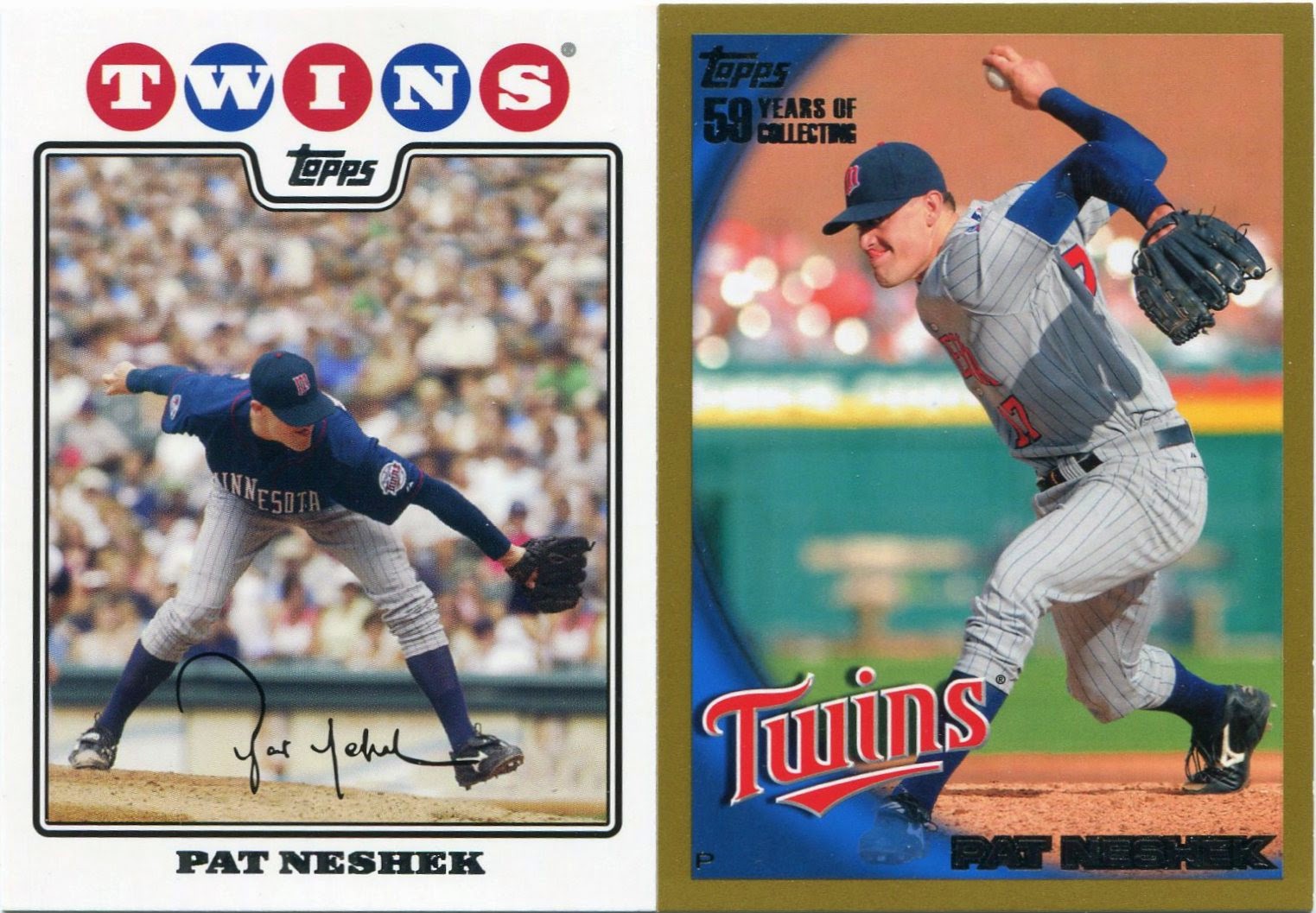 He doesn't have a whole lot of cards out there, but all the ones I've seen have been spectacular.

As you might know, Neshek is a fellow collector and a great TTM signer. He's quietly putting together a brilliant season with the Cardinals this year. His 0.92 ERA is not to be trifled with.

I'm hoping he'll be a sleeper candidate for the All-Star team come July. 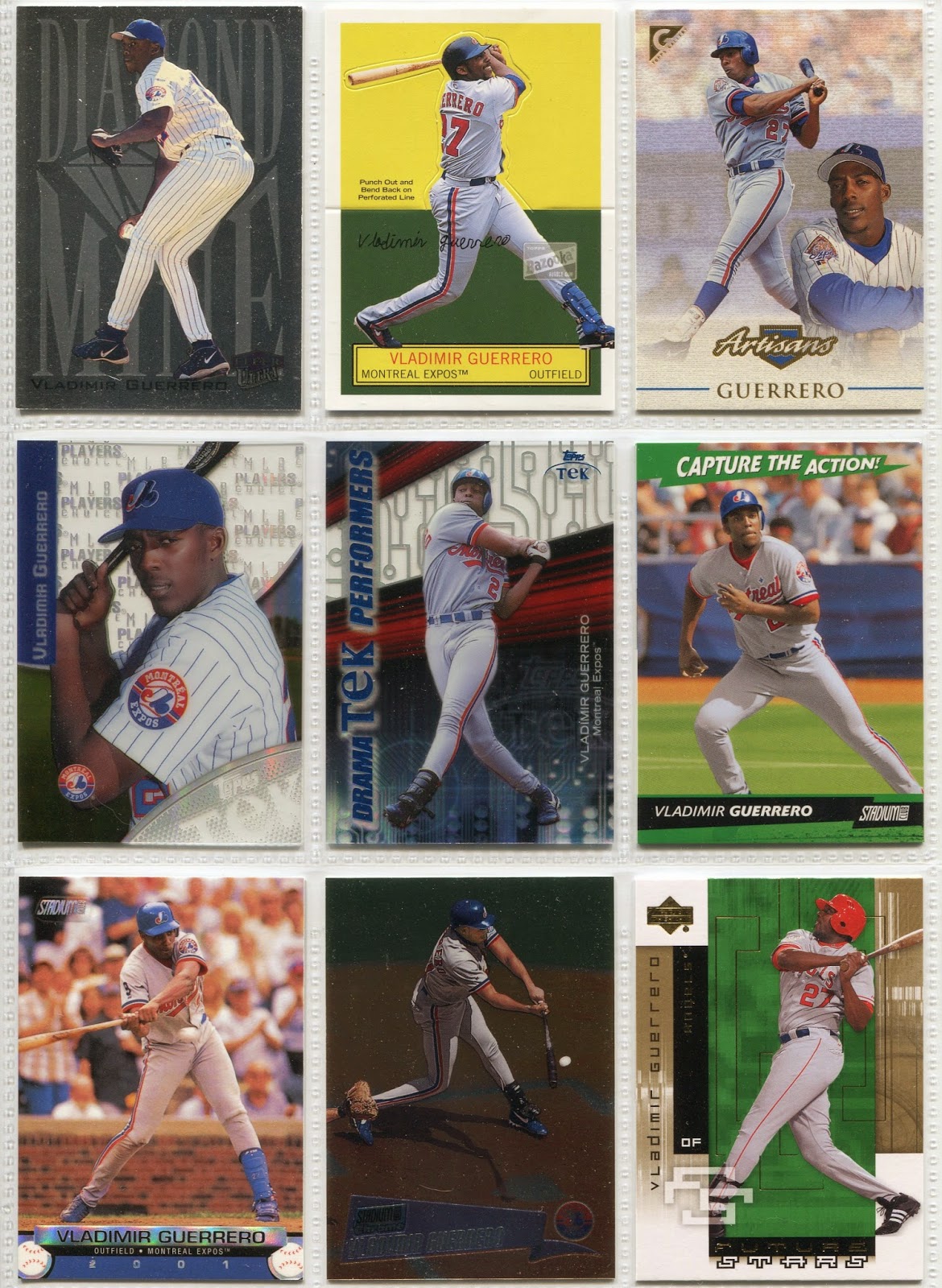 As it turns out, Flat-Rate Box Guy did a number on my most prominent player collection with this batch.

Though he could've stopped there... 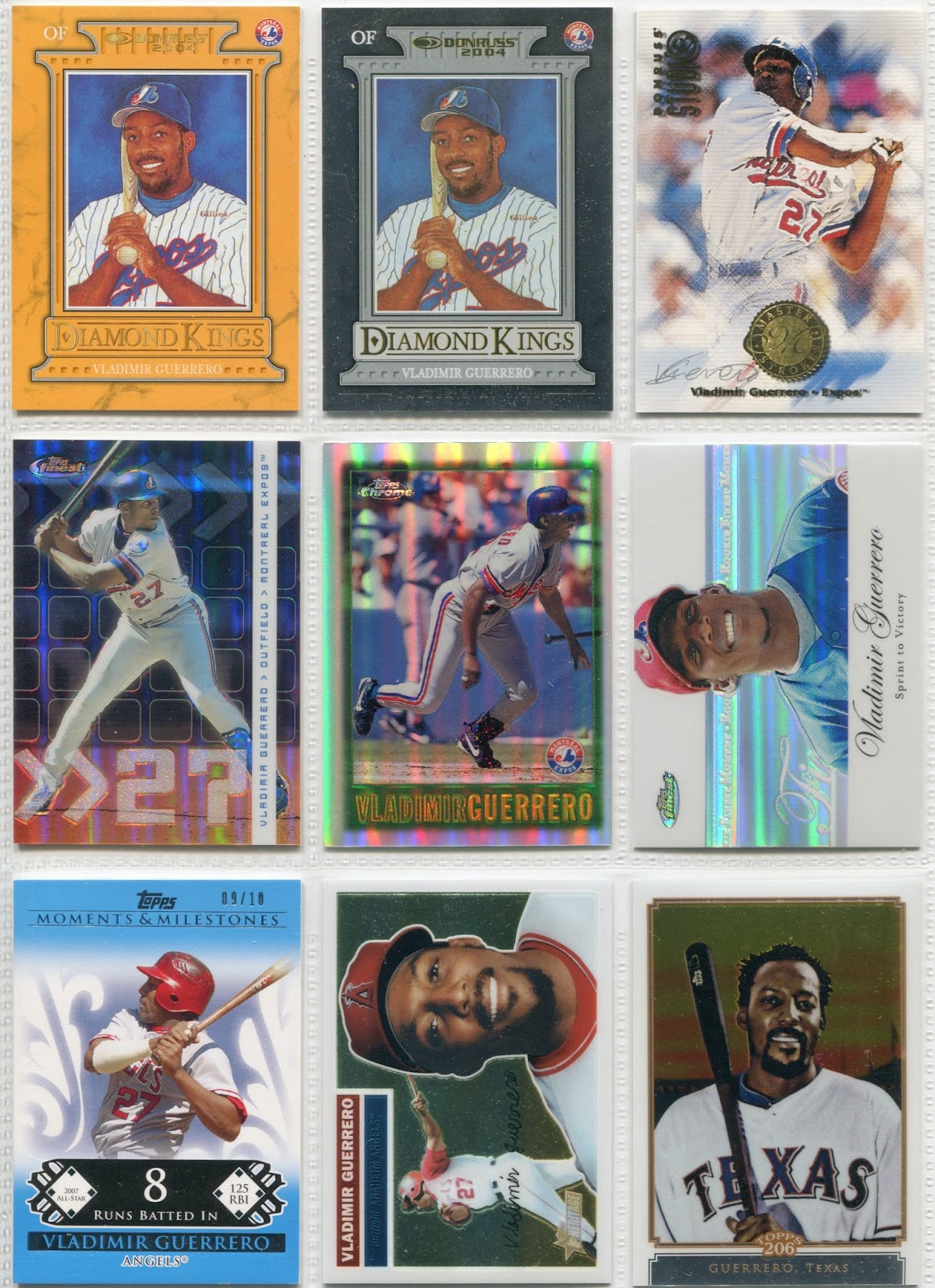 ...Wes took it even further.

Also included were a slew of new refractors and/or serial-numbered cards of Mr. Guerrero. I don't think I'd ever seen so much Vlad goodness in one place.

This beautiful page has to be among the greatest scans in the history of my blog. 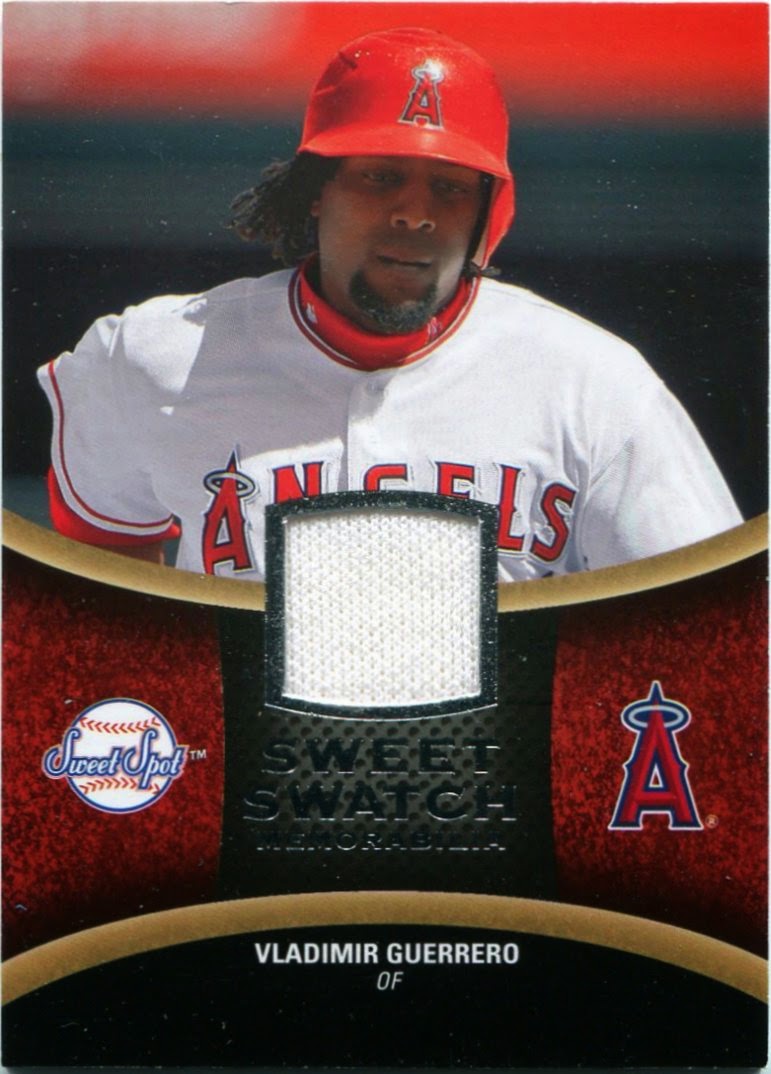 He was also gracious enough to throw in this jersey card of Vlad.

As you probably know by now, I'm not the biggest fan of relics these days. While I may not actively seek them out anymore, I certainly won't turn down any that people send me towards my player collections.

Especially one of Vlad. 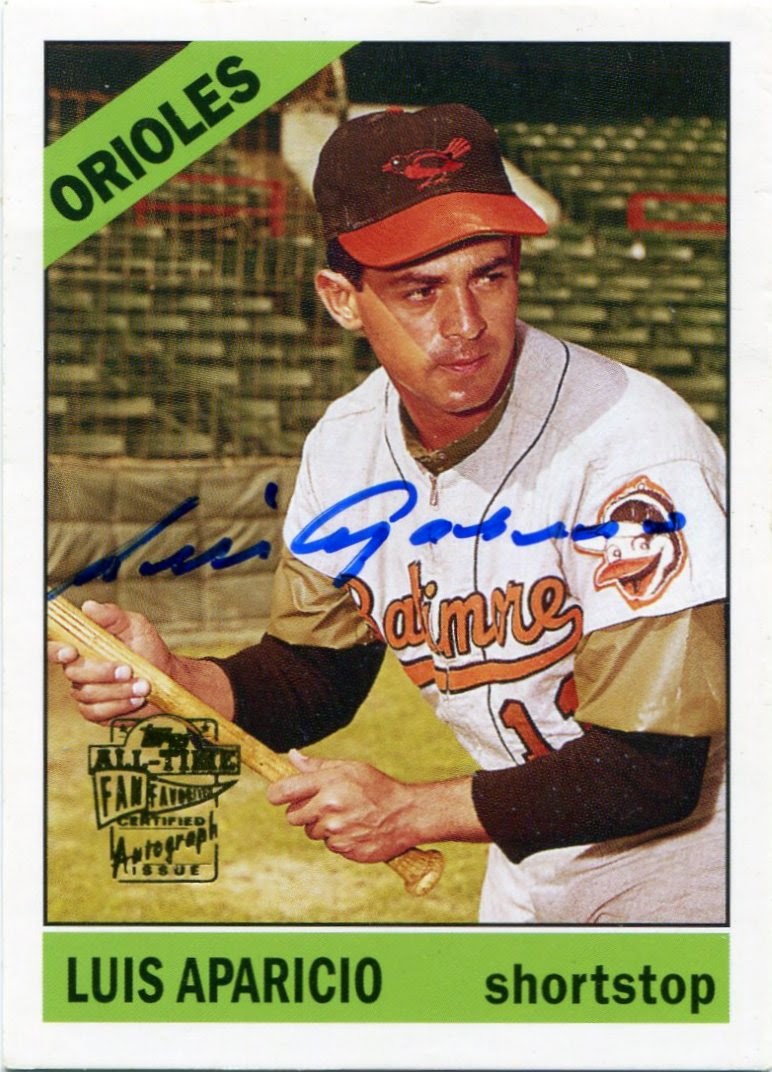 ...let's get back on the topic of Luis Aparicio.

A little while before this box arrived, I got an email from Wes. He had a list of a few different guys and wanted to know if I still collected them. Luis Aparicio was among them.

I guess I can see why now. Wes wanted to make sure this fantastic Fan Favorites autograph of Aparicio would go to a good home.

I promise you, Wes. Mr. Aparicio is safe with me.

Still, I sure don't think I'm worthy of such an amazing act of generosity. 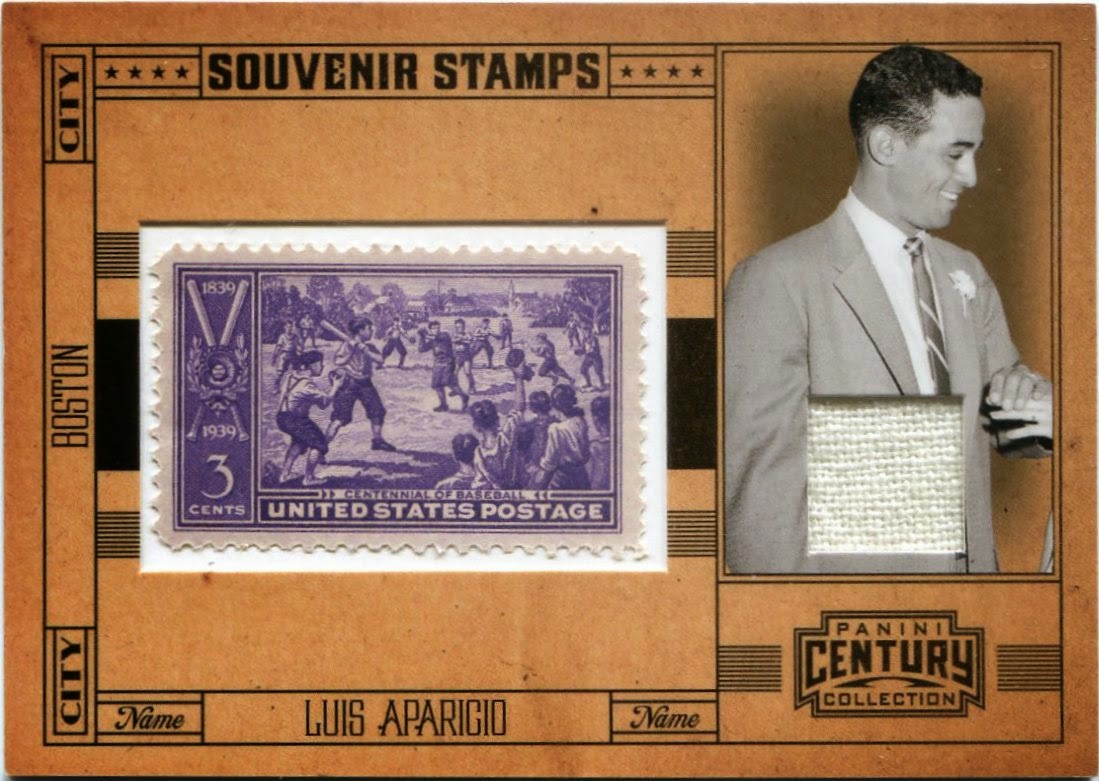 Just when I thought the Luis Aparicio tour was over, this amazing piece fell out of one of the team bags. I can't get over how beautiful it is.

I can't say I ever got into stamp collecting, but I'll be the first to admit how cool it is to see something like that on a baseball card. 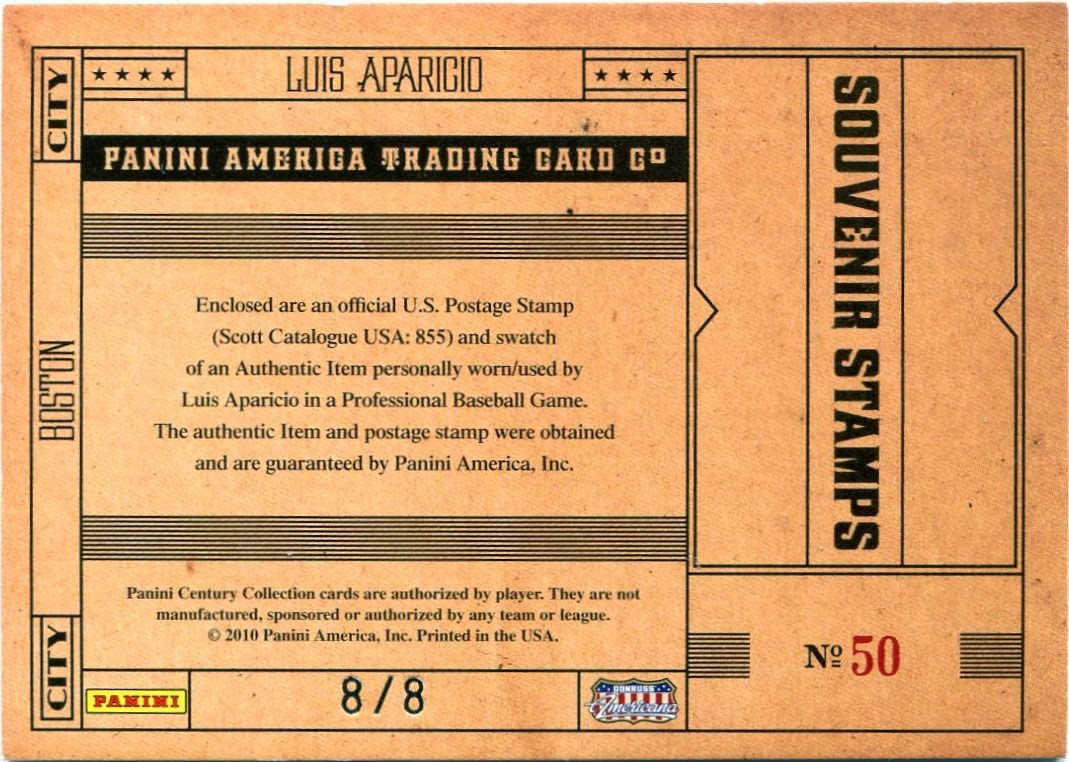 Oh, and did I mention that this stunner is limited to just eight copies?!

And did I mention that this wasn't even my favorite card from Flat-Rate Box Guy? 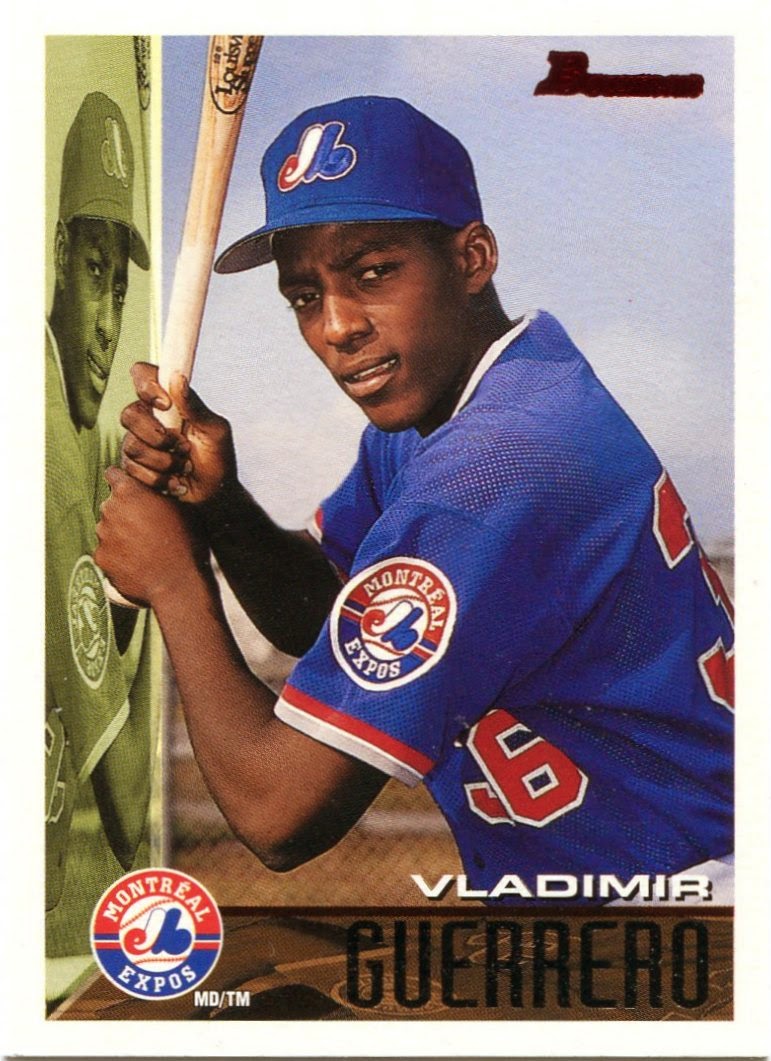 Relics, stamps, and autographs can only go so far. A card like this takes things to an entirely new level. I let an audible "whoa" when I pulled it from its team bag.

Because it's my very first Vladimir Guerrero rookie card. I think he only has two out there, and the other is a wildly expensive Bowman's Best issue.

That said, this one commands a good buck as well. I tried to think back and remember if I'd ever actually seem a copy of this '95 Bowman Vlad rookie in-person before.

I don't believe I ever did. It's just not a card you see too often. I wrote off the hope of ever owning one long ago. I was fully prepared to go my entire life without having a Vlad rookie in my collection.

I guess as long as Flat-Rate Box Guy is around to save the day, you should never give up hope.
Posted by Nick at 6:34 PM

Great package. I'm gonna have to reach out to Wes

Wow oh Wow. I love busting unopened wax too! It is so much fun. That 8 of 8 Looie is a Doozie. Congrats! I was fortunate to catch another box from the flat rate-godfather today(your words)....

Mark-Feel free to send me an email. lifebythedrop79 at yahoo dot com

Wes' packages are unrivaled. I think he has a card printing press in his basement. No really. I think he does!