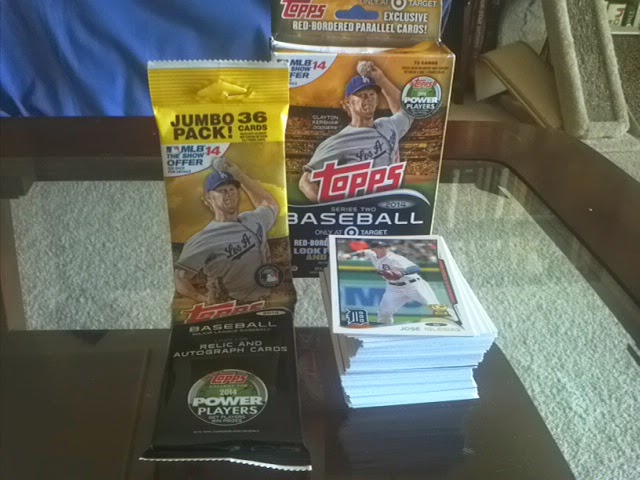 My dad and I went garage sale hunting again today.

One of the Craigslist ads my dad found was advertising both records and baseball cards. We took a walk down to the place and found...absolutely nothing.

The people either closed up shop early or, for whatever reason, completely abandoned the idea of having a garage sale. I guess that's the risk you take with Craigslist.

Heads down, we decided to take a trip to the local Target. I'd heard rumblings of Series 2 being on the shelves, but wasn't honestly expecting to see any yet. My Target only seems to get new stock on Tuesdays. (Yes, it's a little odd that I know that.)

But, lo and behold, there it was. A full smorgasbord of Series 2 blasters, rack packs, and hanger boxes.

I realized earlier this year that blasters are a complete ripoff, so my dad was generous enough to pluck a 72-card hanger box and a 36-card rack pack off the shelf for me. That's 108 cards for about fifteen bucks. I would've gotten around 90 from a twenty-dollar blaster.

After the earlier garage sale disappointment, I knew this break was going to be a whole lot of fun. 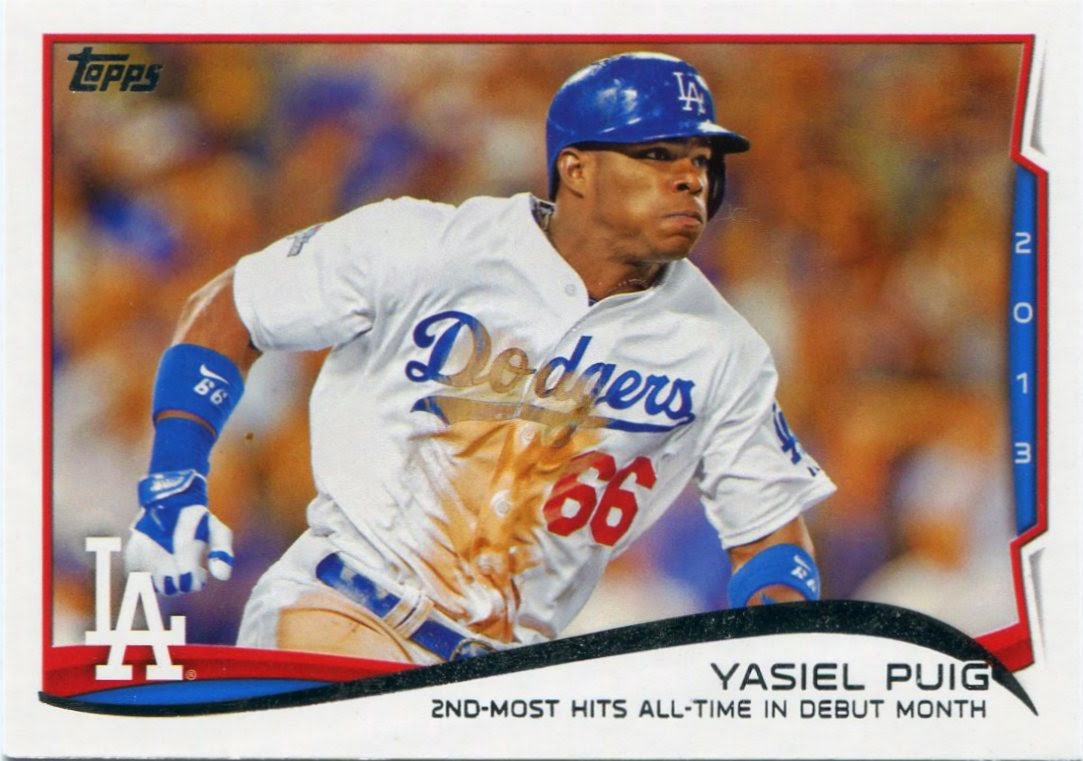 I've always thought that Series 2 suffers from sort of a middle child complex.

When Series 1 comes out, we're all giddy to see the dawn of the new baseball card season. The release of Update in September is kind of like last call in the world of cardboard, basically the year's last hurrah.

Series 2, however, gets a bit lost in the shuffle. It hits the shelves right in the middle of the card season, at nearly the same time as a whole bunch of other sets. I'll admit, I don't count down the days to Series 2, unlike I do with both Series 1 and Update.

That's not to say that it's a bad set, by any means. If you take the timing out of it, it's right on par with any other Flagship release.

My initial Series 2 break certainly left me satisfied. I instantly fell in love with this Yasiel Puig highlights single, one of the first cards that greeted me from the hanger box.

The dirty uniform shot perfectly showcases his style of play. 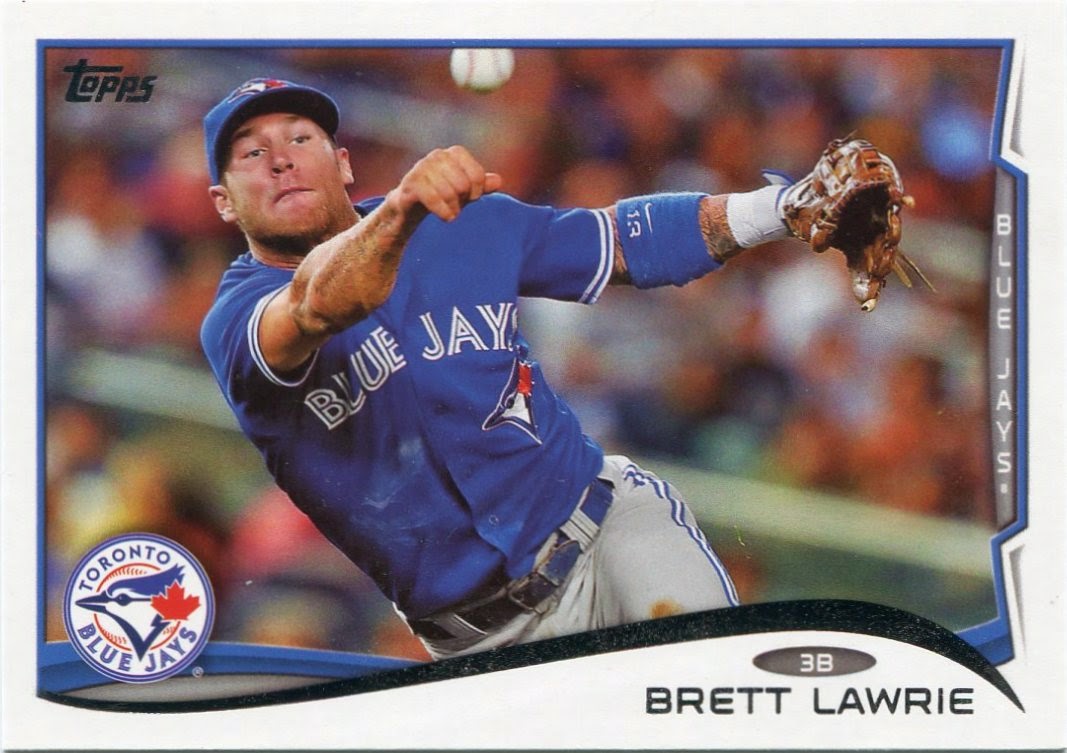 If this great Brett Lawrie card is any clue, the photography is definitely in line with Series 1.

Topps may have even stepped up its game with the horizontal shots in particular. 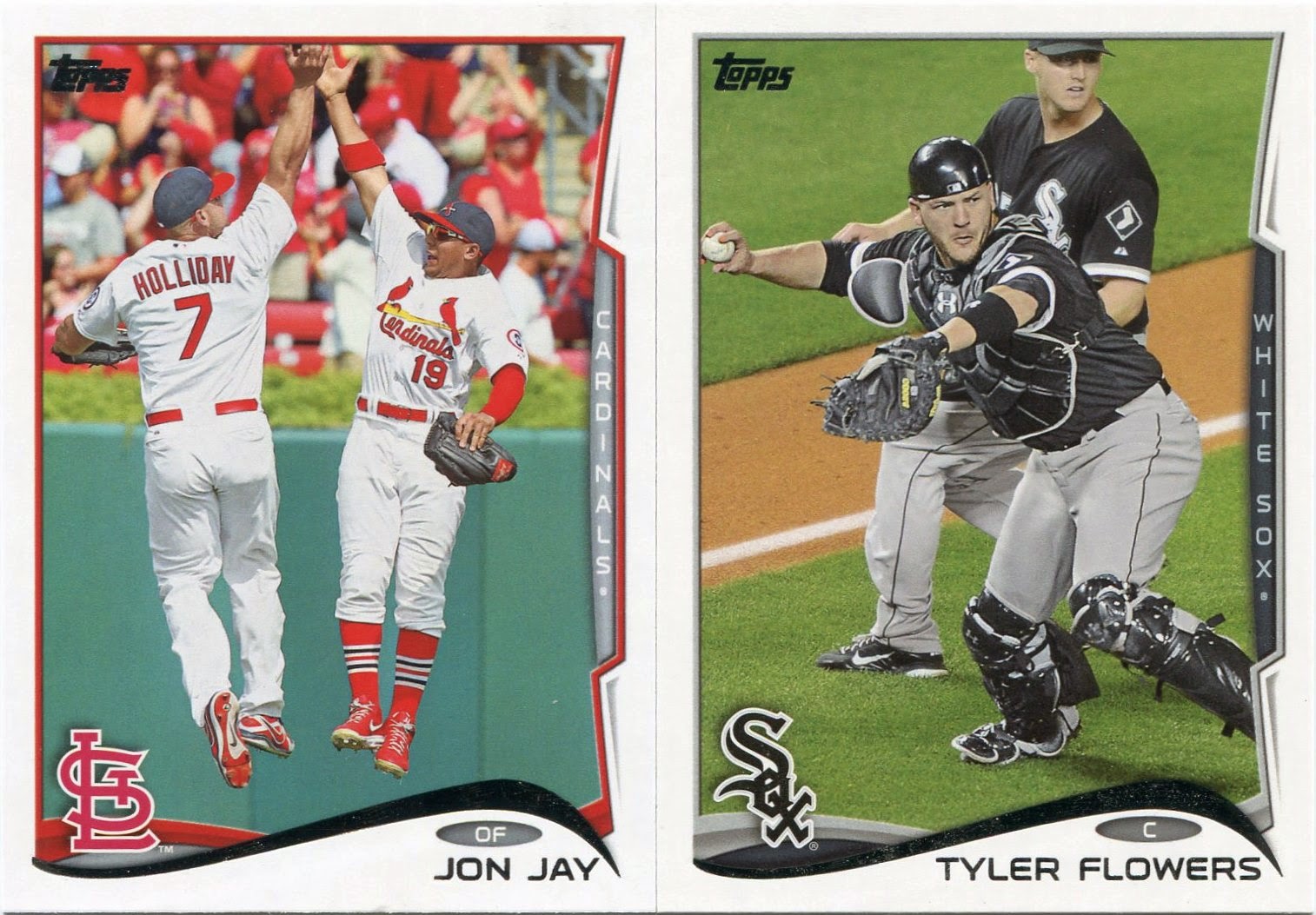 The vertical cards aren't half bad, either.

Jon Jay seems to be developing a knack for great cardboard, and the Flowers is one of the better catcher action shots I've seen in a while.

Vertical shots can be fun, too. 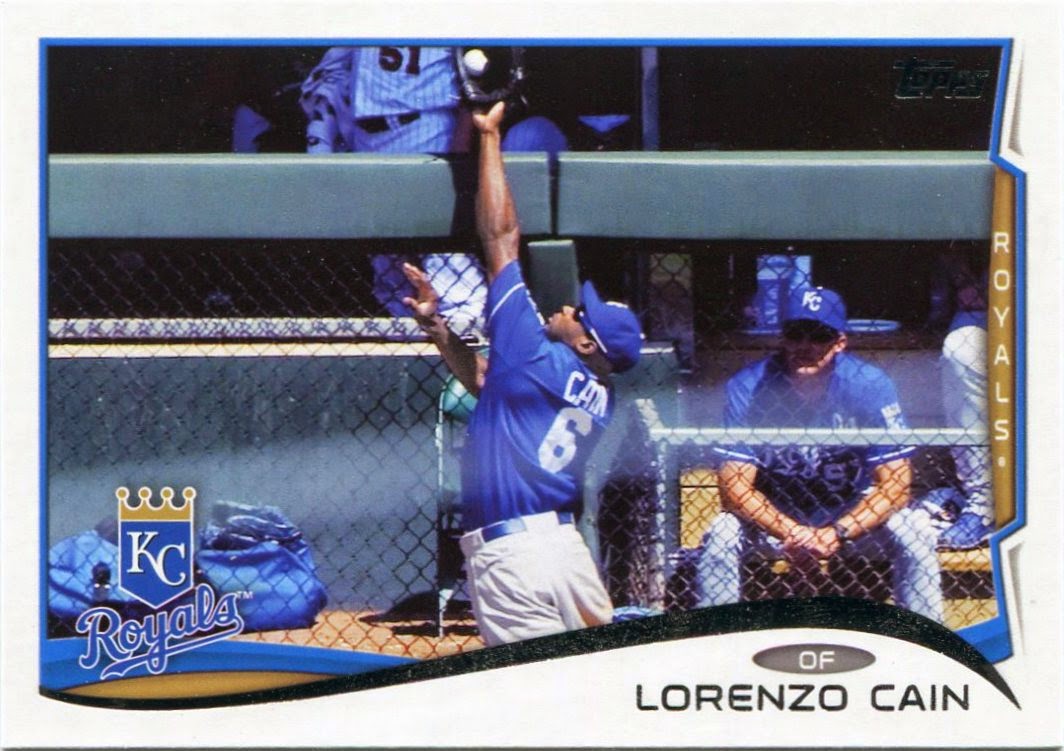 By and large, though, horizontal cards seem to pack the biggest punches in today's day in age.

I've already seen this one featured on a couple different blogs, and for good reason. It's a terrific shot of the home-run-robbing Lorenzo Cain.

Not to mention a great addition to my "at the wall" mini-collection. 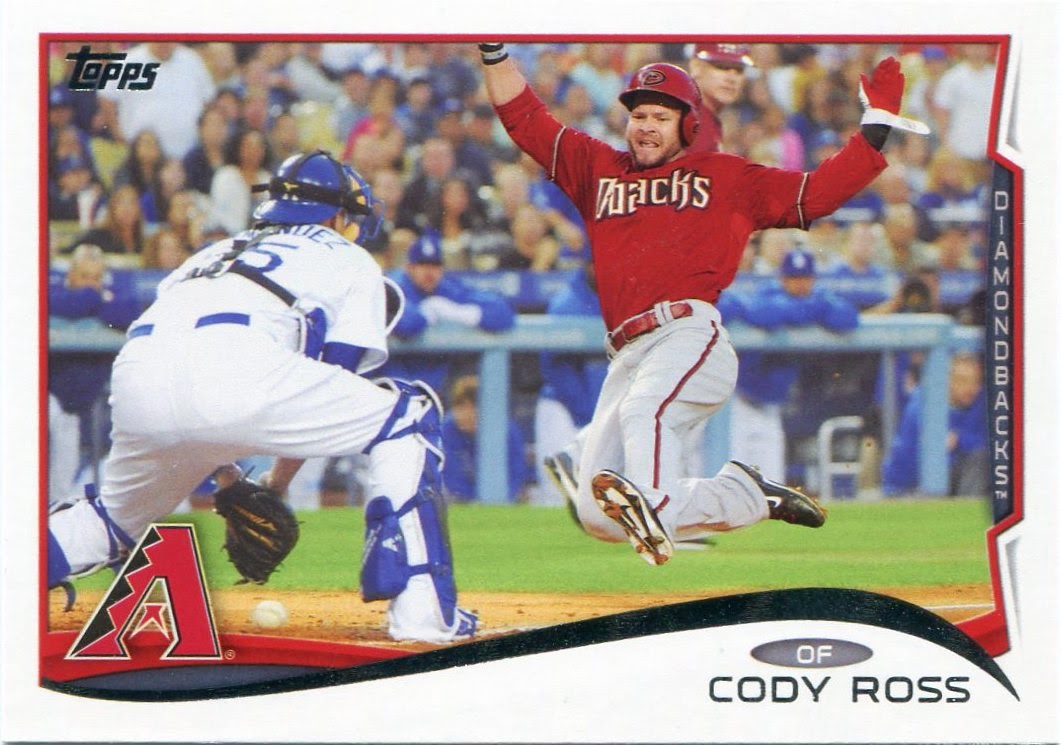 Topps has been providing more and more hits to my various themes lately.

You won't find many better "plays at the plate" than this one. Mr. Ross here is so great, in fact, that he inspired me to do a little detective work.

I'm fairly certain that this shot comes from the 4th inning of the Dodgers-Diamondbacks game on June 12th, 2013. Ross scored on a single by Martin Prado in the top half of that frame with Ramon Martinez manning the backstop for the Dodgers that day.

Ross also scored a run in the 12th inning of the same game, but that came on a ground-rule double.

I doubt that warranted a slide into home. 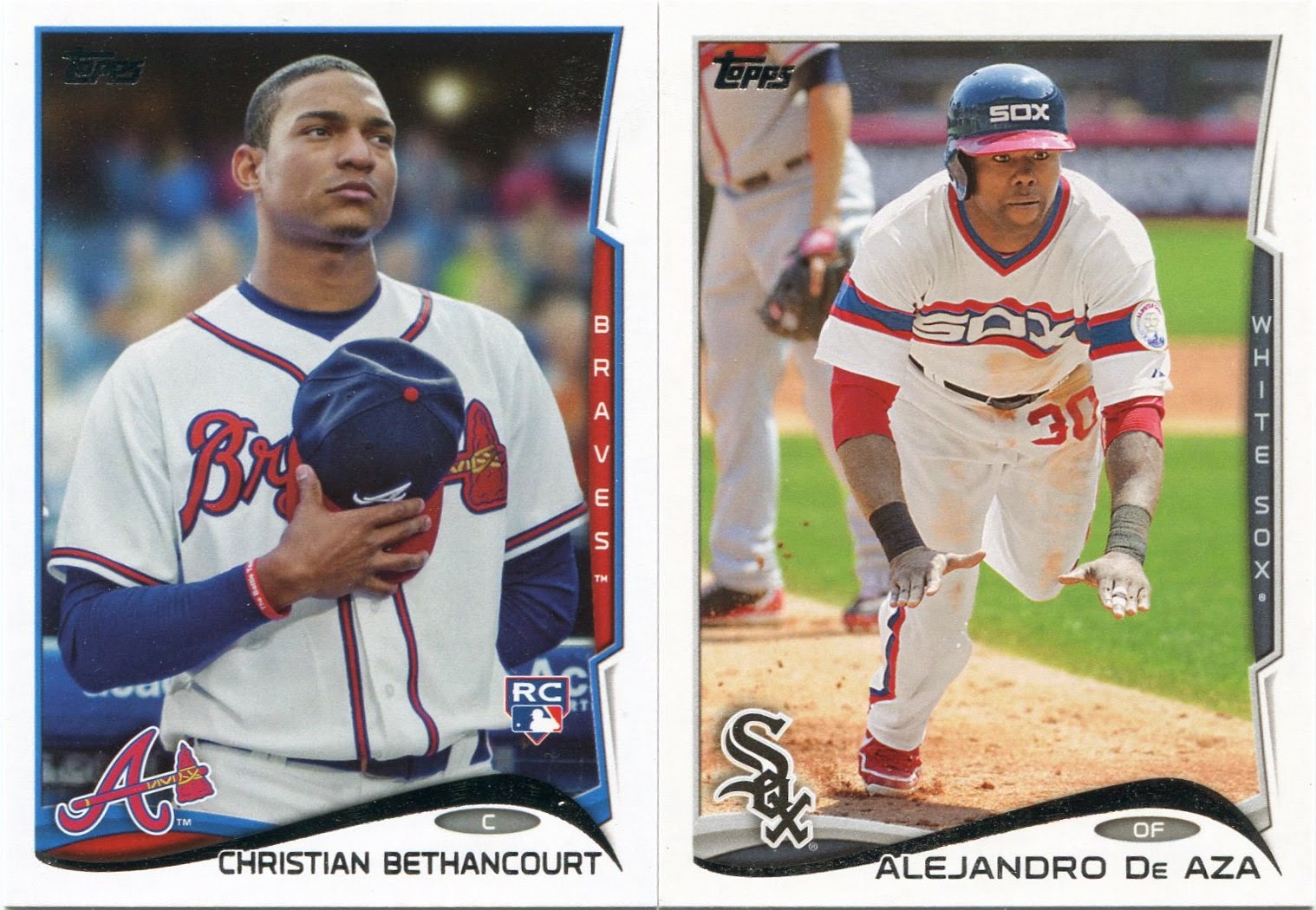 The hanger box was also kind enough to supply new hits to my "anthemic" and "throwback" mini-collections.

I both hate and love those '80s White Sox uniforms. 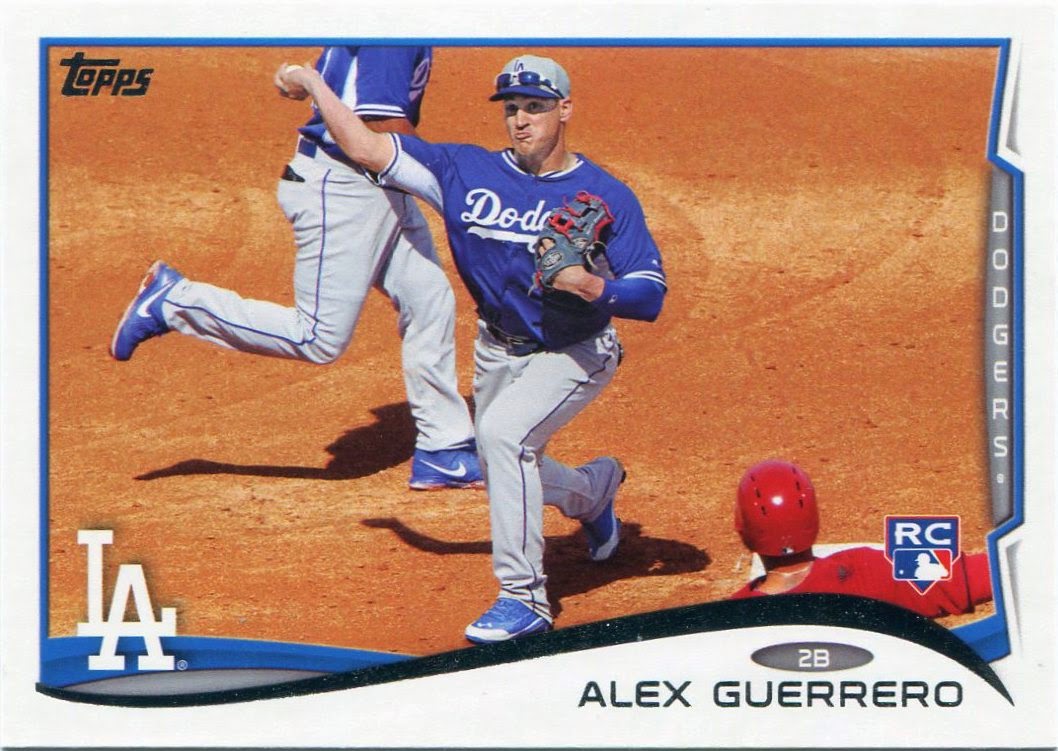 This was perhaps one of the better surprises of the day.

Not only is it a terrific "double dip" shot, but I'm also pretty sure we have a spring training photo on our hands here.

These have been extremely far and few between in the hobby lately. Vintage Topps sets feature tons of spring training shots.

I don't know about you, but I'd love to see them make a comeback. 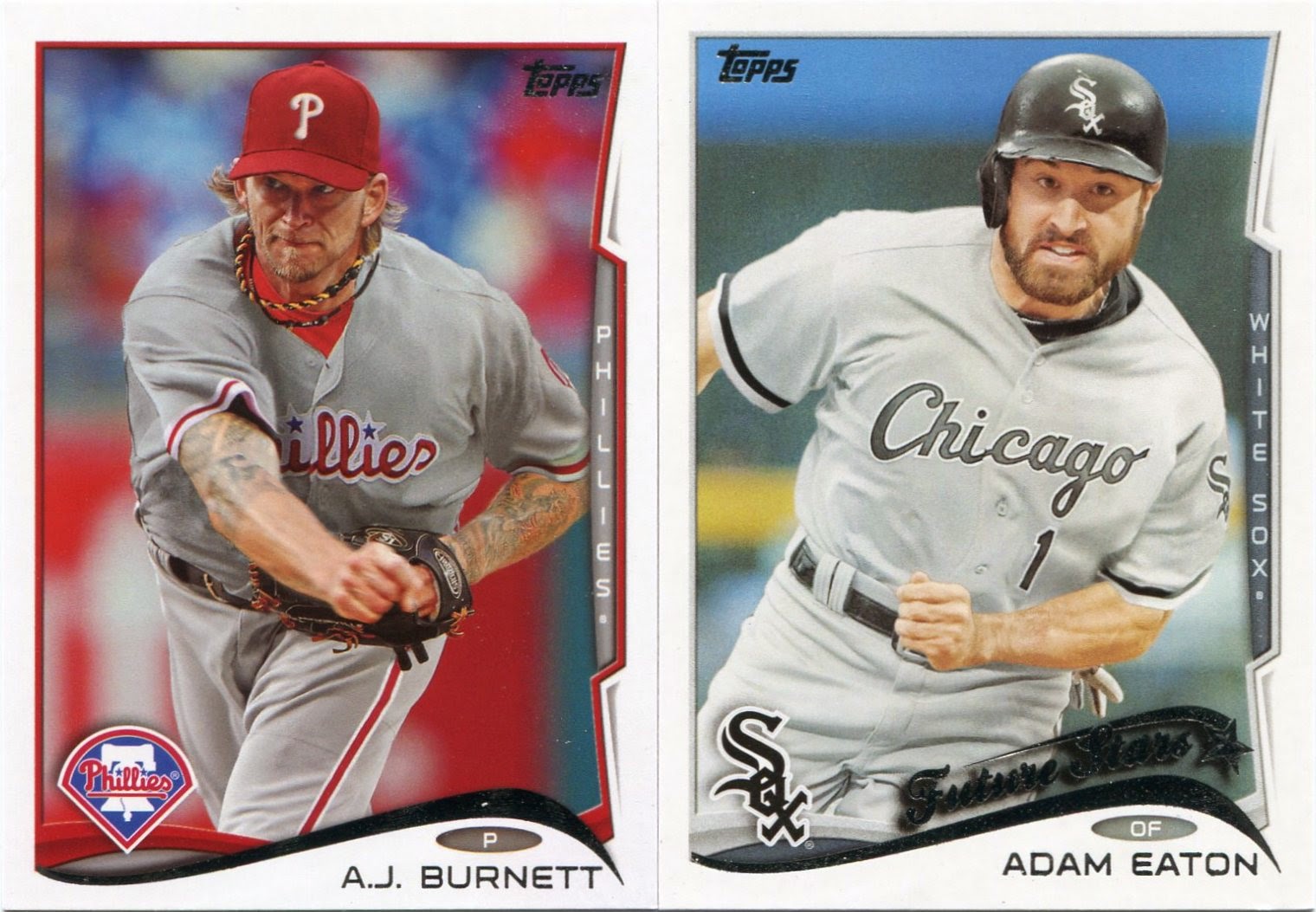 If nothing else, spring training shots would allow Topps to not have to photoshop guys into their new uniforms every year.

The lack of real, authentic photos is one of the most disappointing trends as of late. The photoshopping craze appears to be taking over the hobby. I'm starting to believe that Topps just thinks we're stupid enough not to notice the fake jerseys.

Still, I'd be lying if I didn't admit that I liked seeing guys in their new Series 2 duds, photoshopped or not. 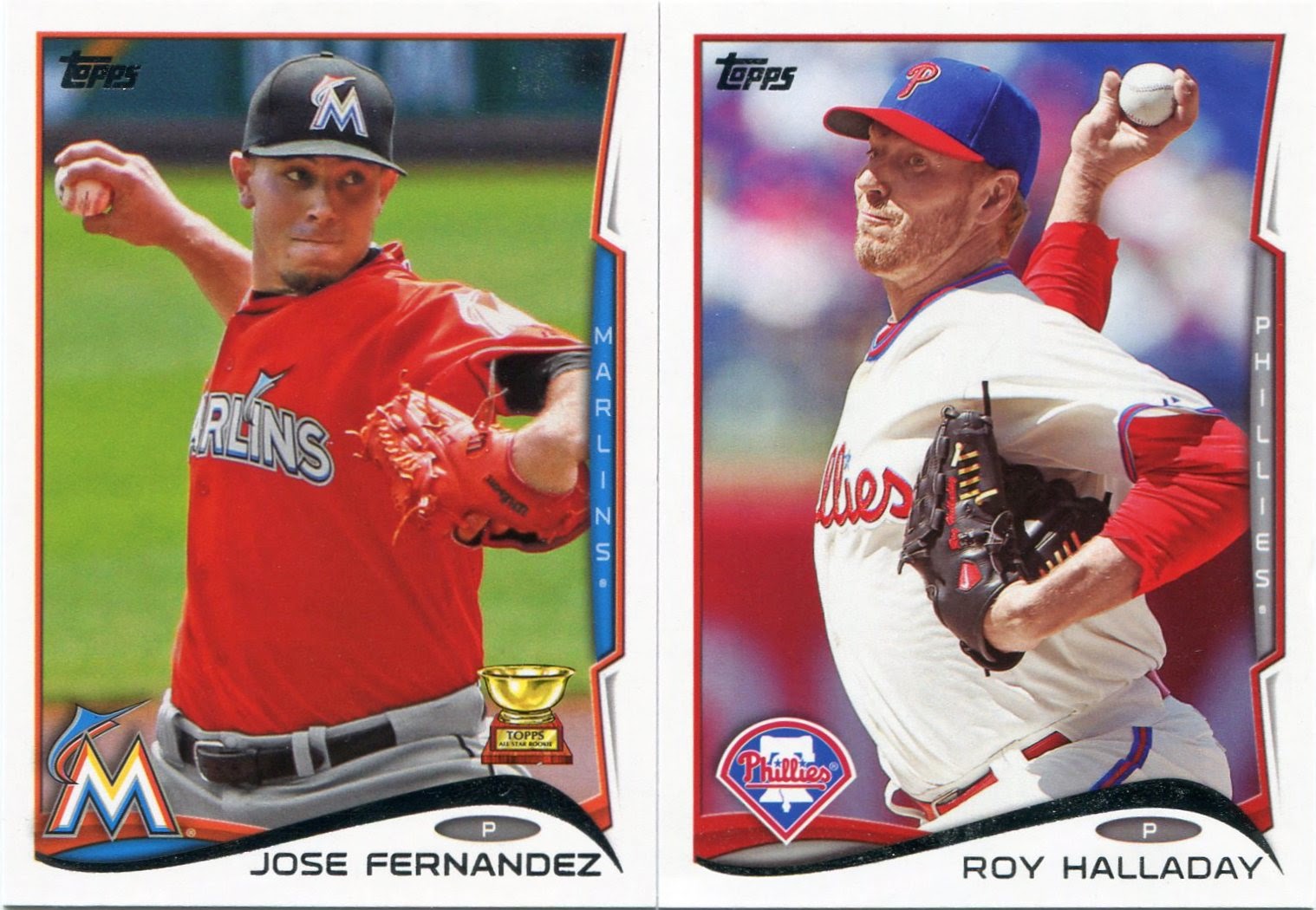 Though I'm all for terrific action shots, I'm always up for a little star power as well.

My initial Series 2 break provided some of that.

I find it interesting that Roy Halladay was included in this set, as he announced his retirement well before the baseball season began. At least it means he'll have a true Flagship "sunset" card.

By the way, these two remind me of another not-so-original complaint I have with Topps these days.

I'd have to go back and check, but it seemed like 95 percent of the pitcher cards I pulled featured the same tightly-cropped, puffy-cheeked action shots. They're virtually indistinguishable from one another and started to put me to sleep after a while.

Can't you change it up a bit, Topps? 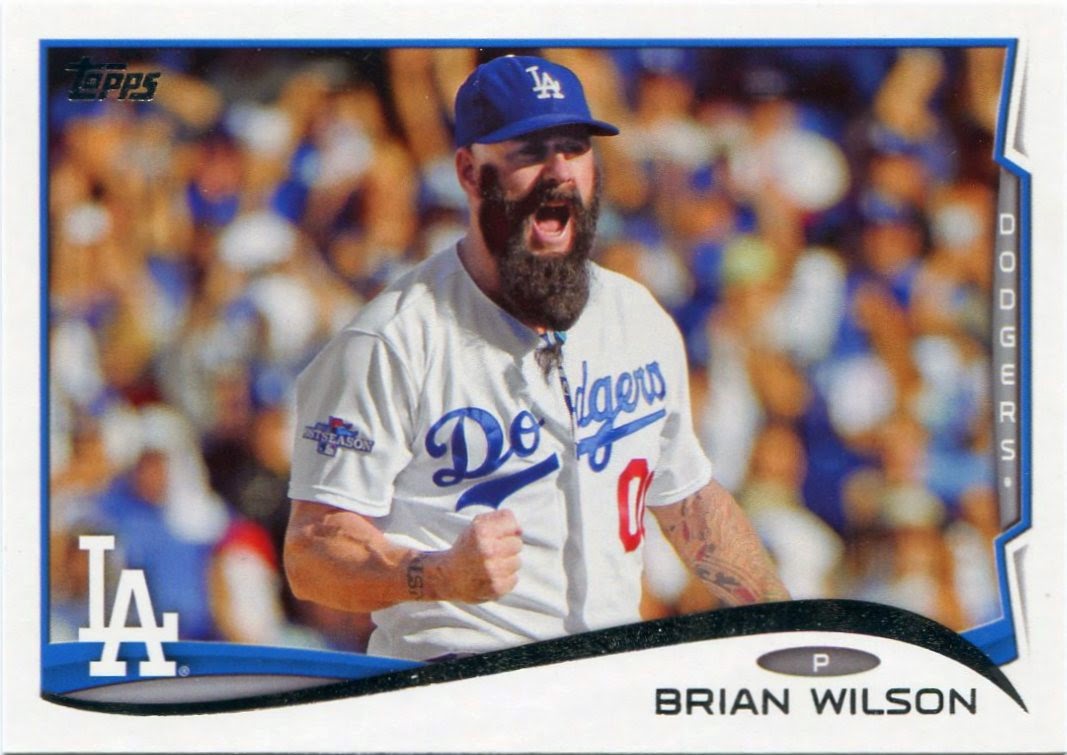 Of all the base cards I pulled from my rack pack and hanger box, this was probably my favorite. Though he's struggled this year, I'm still a big fan of "The Beard".

When you get past all his media-hyped antics, it's apparent that the guy really does love the game. I think this great shot does a great job of featuring that.

And it features the famous beard in all its glory, of course. 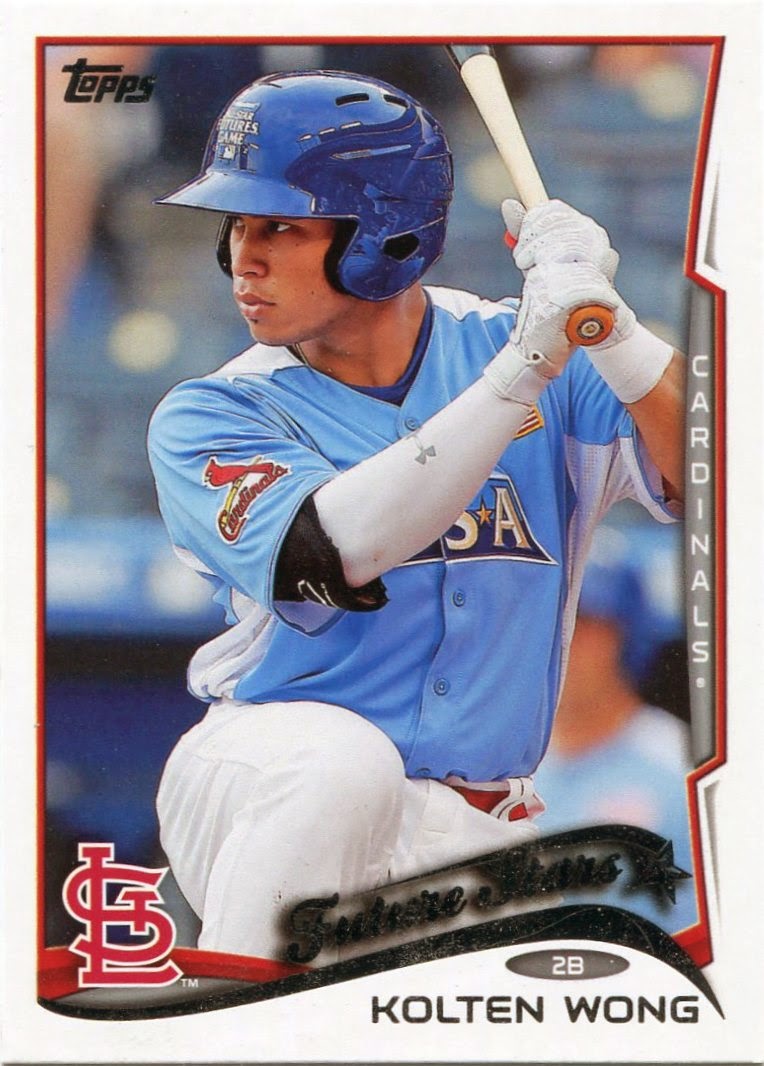 I guess the cardboard gods were with me today.

About halfway into my hanger box, I found this one. I'd done a little research on Series 2 a couple days ago, so I knew what it was the moment I pulled it.

What we have here is a Future Stars photo-variation short-print of Kolten Wong, one that features him in a Futures Game USA jersey. I never, ever pull stuff like this.

If anyone needs Mr. Wong here, I'm more than willing to trade him.

Though I'm not in the hobby for these types of SPs, it still made for a fun little surprise. 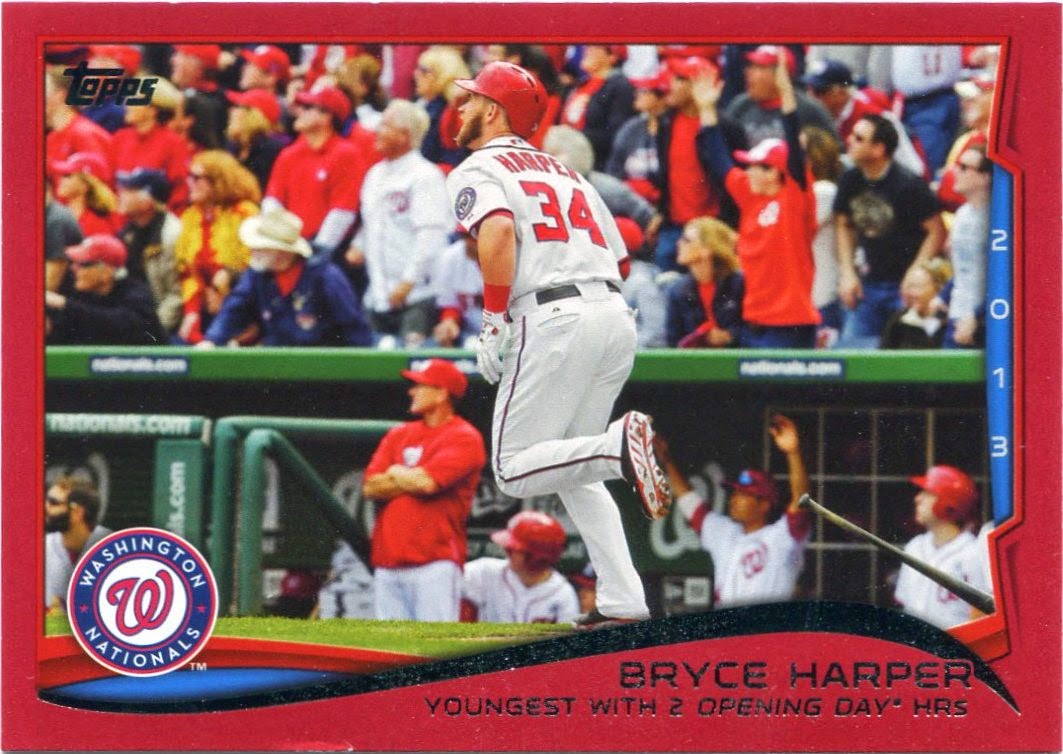 As you might guess, the parallels are back with a vengeance in Series 2.

My rack pack featured a few nice Target Red singles, including this great shot of Bryce Harper notching one of his two 2013 Opening Day dingers.

On top of that, the red border goes extremely well with the Nationals color scheme. 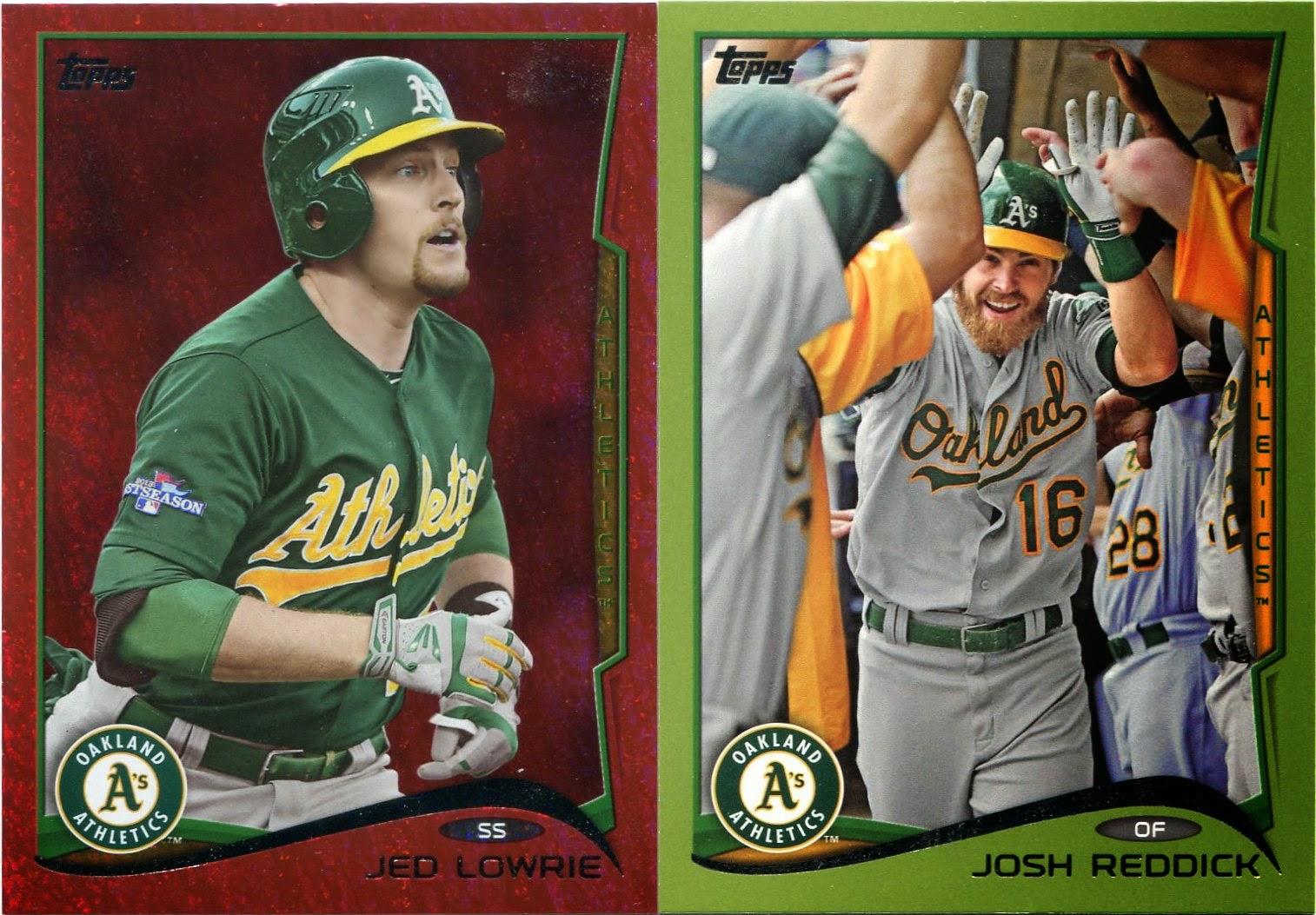 As far as parallels go, I guess it was an A's hot box.

I couldn't have been happier with that. The A's have become my favorite non-Chicago club these past few years.

Jed Lowrie has long been a coveted "binder guy". Plus, as I've mentioned numerous times before, I consider Josh Reddick special because he and I share a birthday.

Much like the red border/Nationals combo, the green parallels perfectly complement the A's logo.

Oh, and let's not forget the awesome dugout shot on the Reddick there. 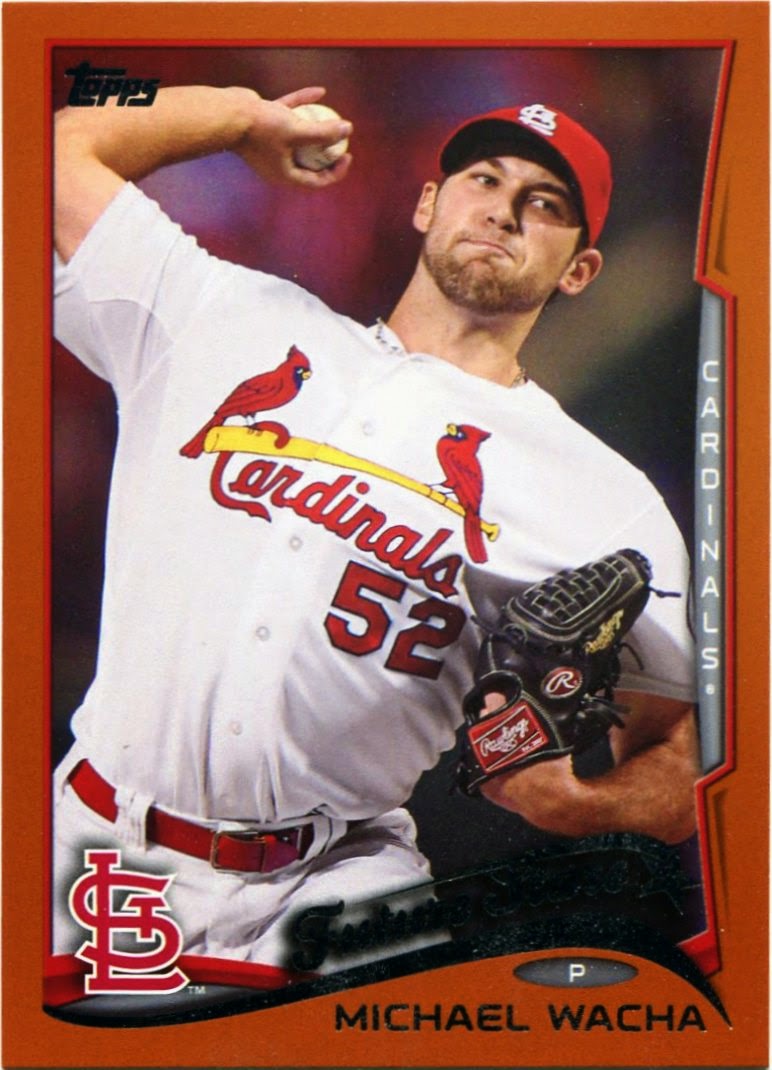 New to Series 2 are these orange parallels.

Like the yellows in Series 1, these are exclusive to retail hanger boxes. I was lucky enough to pull one of Mr. Wacha, one of the brightest young arms in the game today.

Maybe I'm crazy, there's something about this color that reminds me of a sunburn. 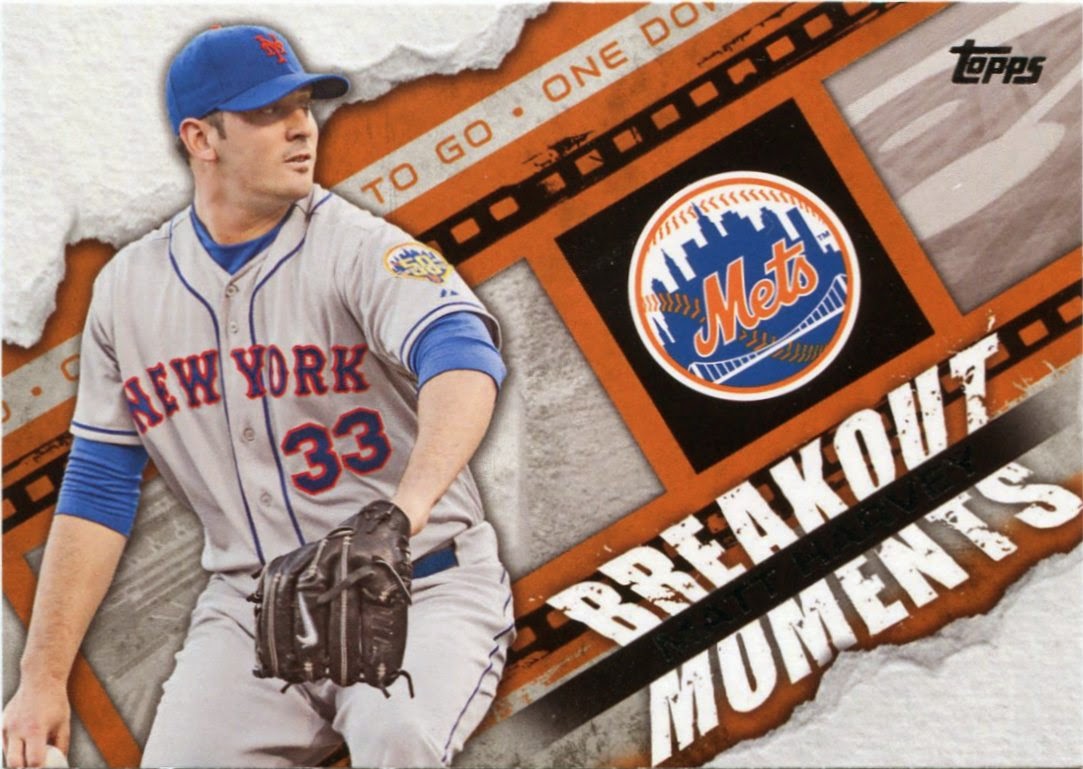 I don't buy hangers or rack packs for the inserts, but I'd be remiss if I didn't mention them in this post.

Series 2 features the debut of this "Breakout Moments" series. Though they definitely feature a lot more pizzazz than most inserts these days, I'm still not a big fan.

I still can't believe that Topps feels the need to use foil on every single card these days. You can't see it in the scan, of course, but Matt Harvey's name is placed in that black bar near the bottom-right corner of this one. 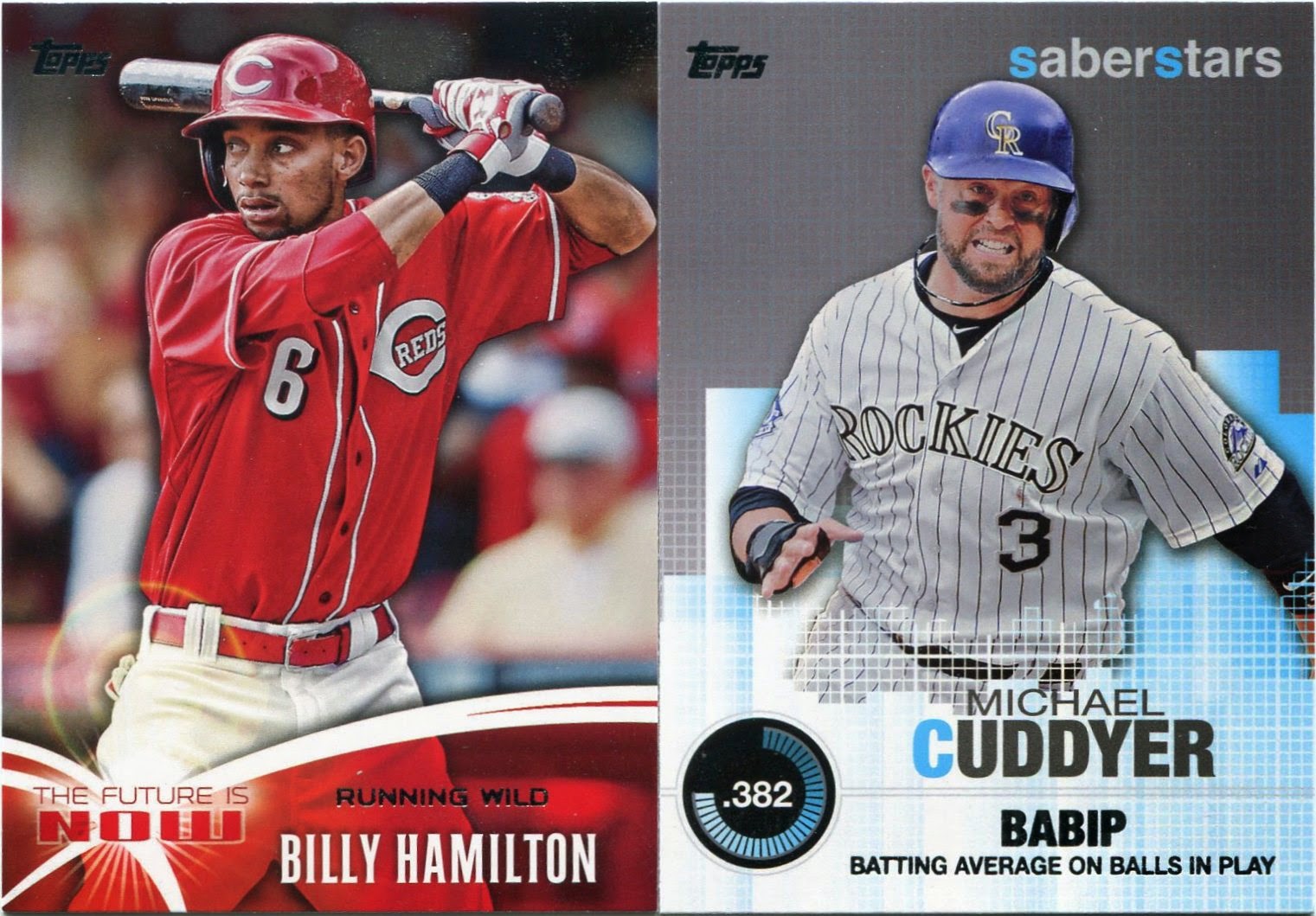 Series 2 won't change my apathy towards those "Future Is Now" inserts.

Not only that, but I pulled that exact same Billy Hamilton from both my hanger and rack pack. Way to be on top of the collation, Topps.

One trend I think we're starting to see in the hobby is a slight catering to the sabermetric community. Topps famously featured WAR on the backs of cards this year.

And, in case you haven't heard, one of the short-print themes in Series 2 revolves around sabermetric stats. I wasn't lucky enough to pull any of those, but I did get one of the "Saber Stars" inserts from my rack pack.

From what I can gather, these focus on one particular sabermetric stat. Topps went with BABIP, or batting average on balls in play, for Michael Cuddyer.

Personally, I wouldn't be surprised if we start to see sabermetrics featured more and more prominently on baseball cards in the coming years.

Whether that's for better or worse is your call. 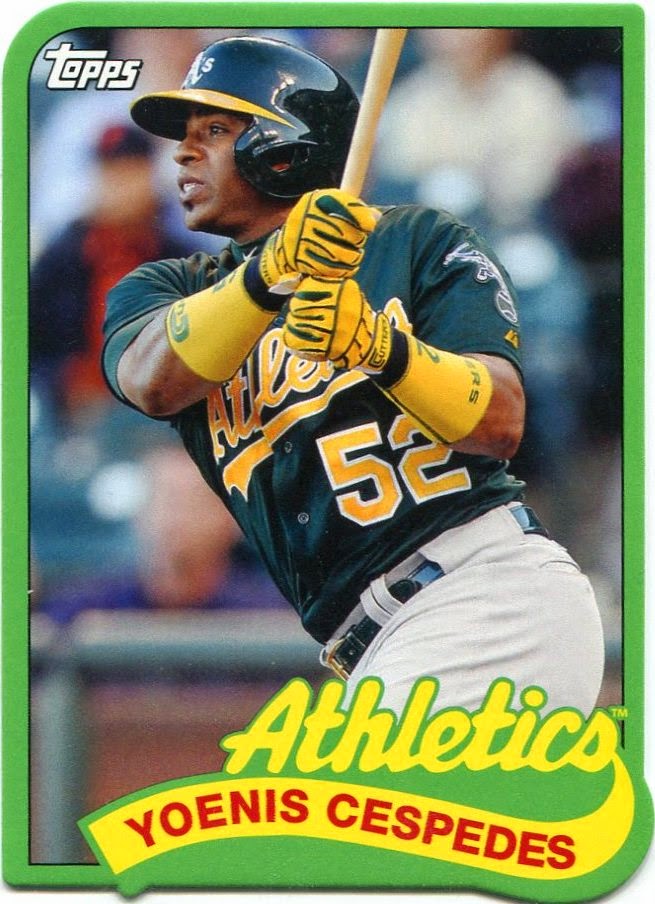 We'll close out this Series 2 extravaganza with the continuation of my A's hot box.

I couldn't have picked a better time to pull this Yoenis Cespedes '89 mini. The baseball world is still buzzing about his pair of spectacular throws earlier in the week.

All in all, I think this hanger/rack pack combo gave me a perfect introduction to Series 2. I'll probably put up my base and insert want lists for this set soon if anyone is interested in a little trading.

Though I'm not sure how to solve the problem, I don't think Series 2 receives the recognition it probably deserves.

I guess that's the fallback to being the middle child of the baseball card industry.
Posted by Nick at 6:36 PM

Middle child is a great way to put it. Underappreciated, relied on, keeps things moving forward in the same direction as the older child, but with some different wrinkles, tastes, and likes than the original and certainly without the whimsy and attention seeking that the youngest usually brings to the table.

If you're trading the Bryce Harper red I'd love a shot at it. I managed to get more things I think (and hope) you'll enjoy ;).

I haven't checked Cuddyer's photography website in a long time. I wonder if he's still doing it. (Doesn't look like he's added anything in quite a while.)

The horizontal shots are the best. I bought another blaster with another coupon today, with just as much as luck as the first one.

I'll have to grab the Sox

Well now I'm excited about series 2! On my way to Wal-Mart...