Kick out the jams 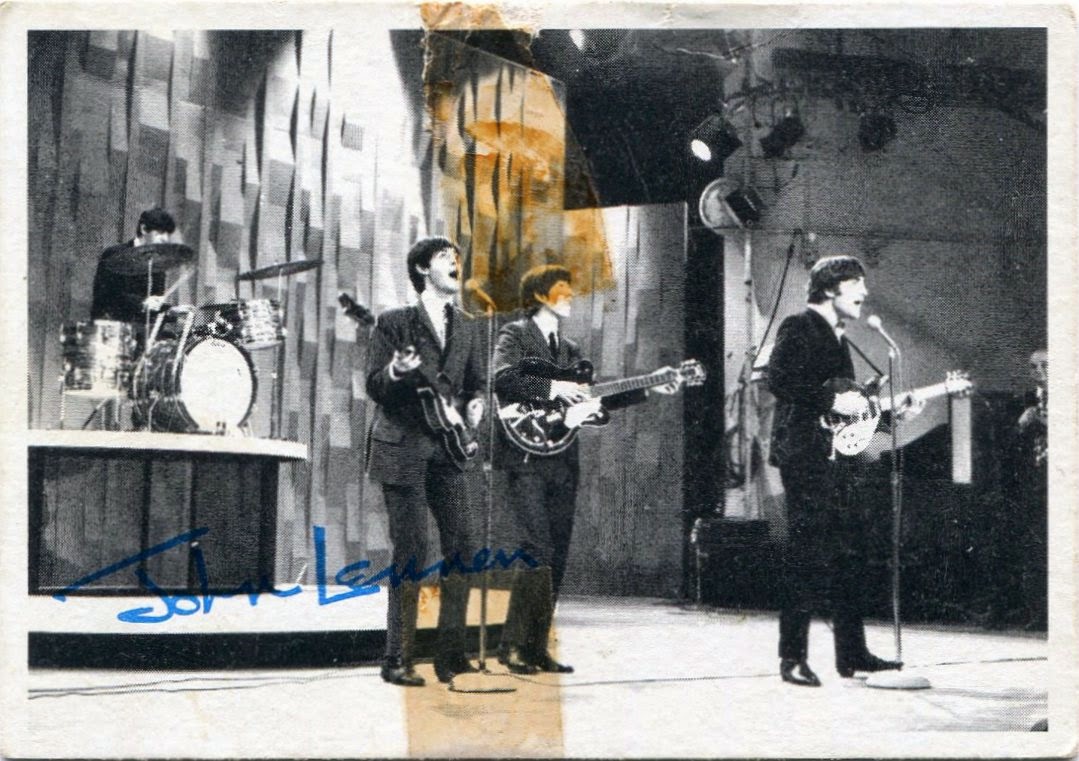 I've been blogging now for about two and a half years now.

Frankly, I can't believe it's taken me this long to come up with an idea for a post like this.

As I've mentioned many times in the past, music and baseball are my two true passions. If you read this blog at all, you probably know big of a baseball fanatic I am.

I haven't mentioned my music obsession as much as I'd like around here, though. While I've never been in a band, I've played guitar since about 8th grade. I switched my main focus to bass around four years ago, although I try to practice both as much as I can.

Finding new music has been a constant thread throughout my life. I've acquired a lot of my tastes through my dad, and I don't have the typical musical preferences of most people my age. Tunes from bands like R.E.M. and the Beach Boys get a lot of airplay in my world.

Because of how passionate I am about both topics, I try and track down any music/cardboard clashes I can find. They've been a main focus of my non-sport collection from the start.

One of my biggest successes as of late has been tracking down a few authentic Beatles cards. I was a bit of a late bloomer, but I've become a huge fan of the Fab Four since high school.

Thanks to a recent card show and my local flea market, I've added about a dozen new Beatles cards to my collection in the past few months.

I hope there's more to come. 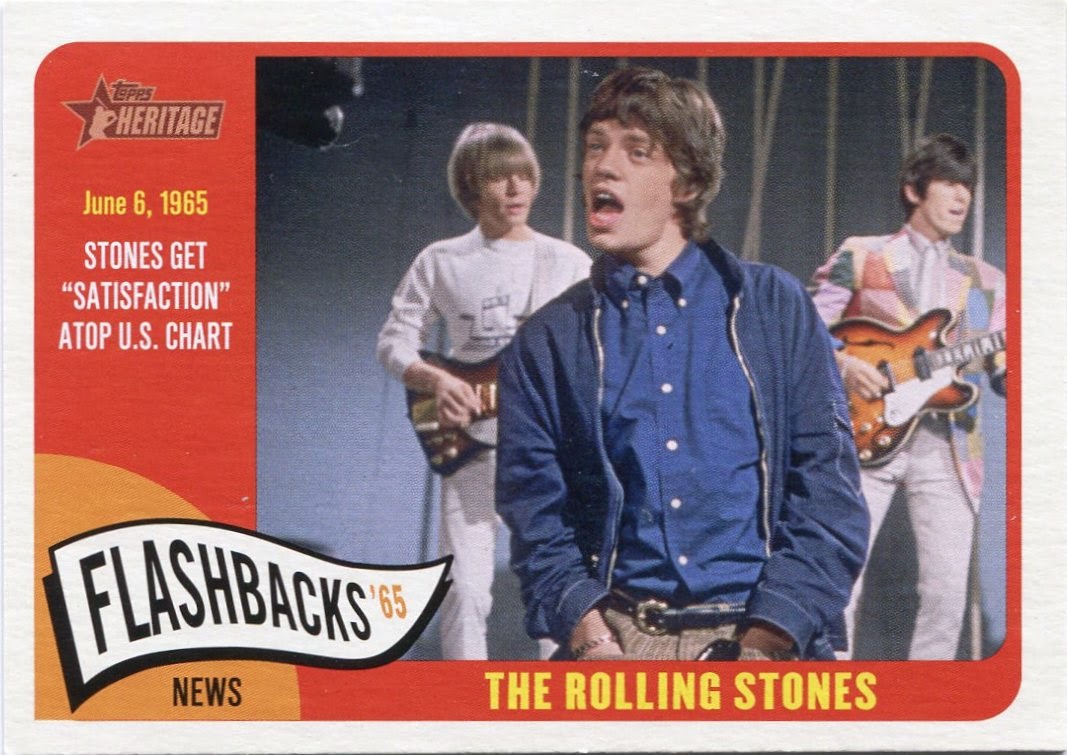 I guess I'm generally a fan of the British Invasion as a whole.

I'm not sure there's ever been a better time for music. Part of me wishes I grew up in the '60s to witness bands like the Beatles and Rolling Stones first-hand.

Heck, Topps is still paying tribute to bands like the Stones. Coming from this year's Heritage "News Flashbacks" insert series, this is one of my favorite cards of 2014 thus far. (They had one in last year's Heritage as well.)

Who would've thought the Stones would still be playing more than fifty years later? 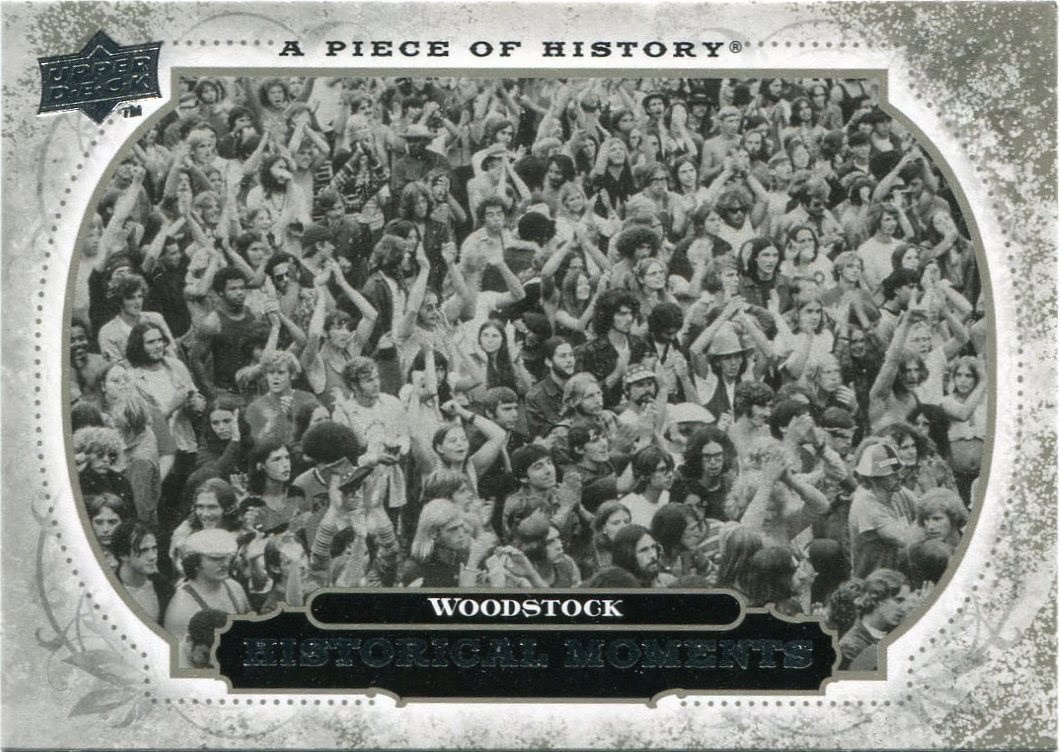 My non-sport collection has allowed me to experience some of the joy and anguish of set building.

Although Piece of History was a fairly forgettable brand, I made it a point to track down each of the 50-card "Historical Moments" subsets from 2008 and '09. It took me a while, but I managed to hand-collate each one.

This Woodstock piece is easily one of my favorites.

I'm not a huge fan of more psychedelic bands like the Grateful Dead, but I can certainly appreciate the impact they had on the music industry. 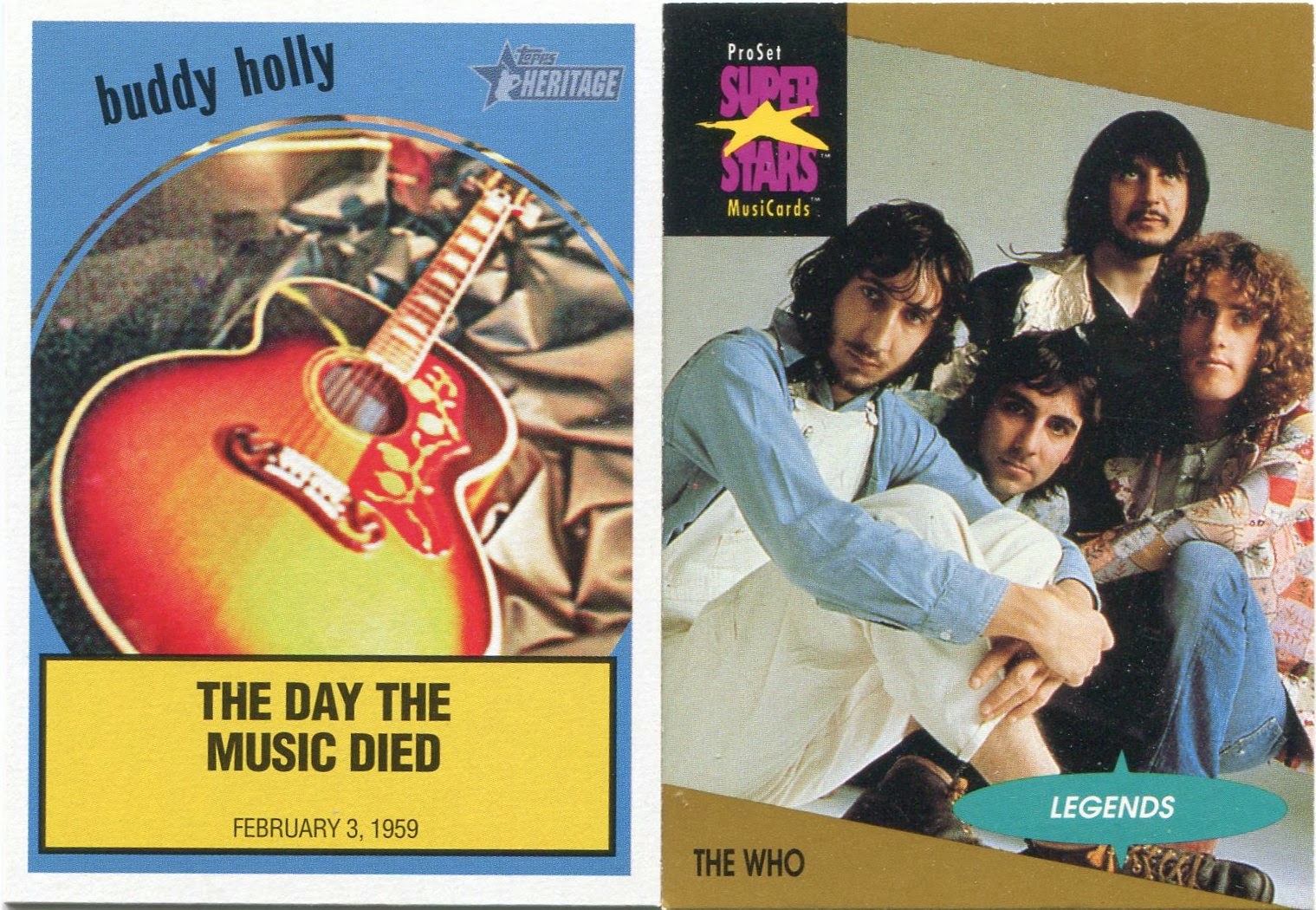 Although I'm still missing a few from last year and this year, I've tried to track down every Heritage "News Flashbacks" insert since their inception in 2009.

I remember going crazy trying to find the one that commemorated "The Day That Music Died". That said, I would've much rather have seen Topps use an actual picture of Buddy Holly (or Ritchie Valens or The Big Bopper) over a generic guitar.

Though I wouldn't say they're one of my favorite bands ever, I do like The Who quite a bit. Pete Townshend is one of the greatest minds music has ever seen.

My friend's stepdad is even in a Who tribute band. I went to see them a couple months ago.

It was an experience, I'll say that. 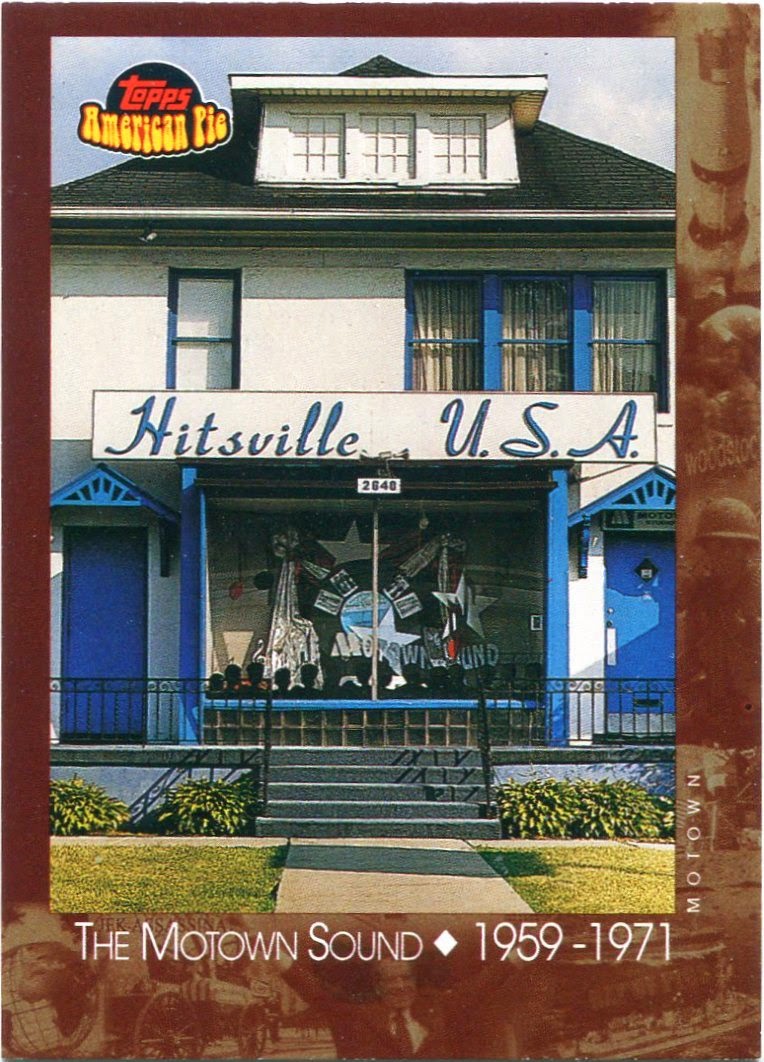 One of my go-to sets for musical cardboard is American Pie.

Though the original set was short-lived (only released in 2001 and '02), it features some of the best pieces in my non-sports collection.

If one musical landmark ever deserved to have its own card, it's Motown. This is the one type of music that I really wish more people my age would listen to and appreciate. I doubt much of today's music would exist without it.

Not to mention that the songs themselves are among the most solid and well-recorded in music history. 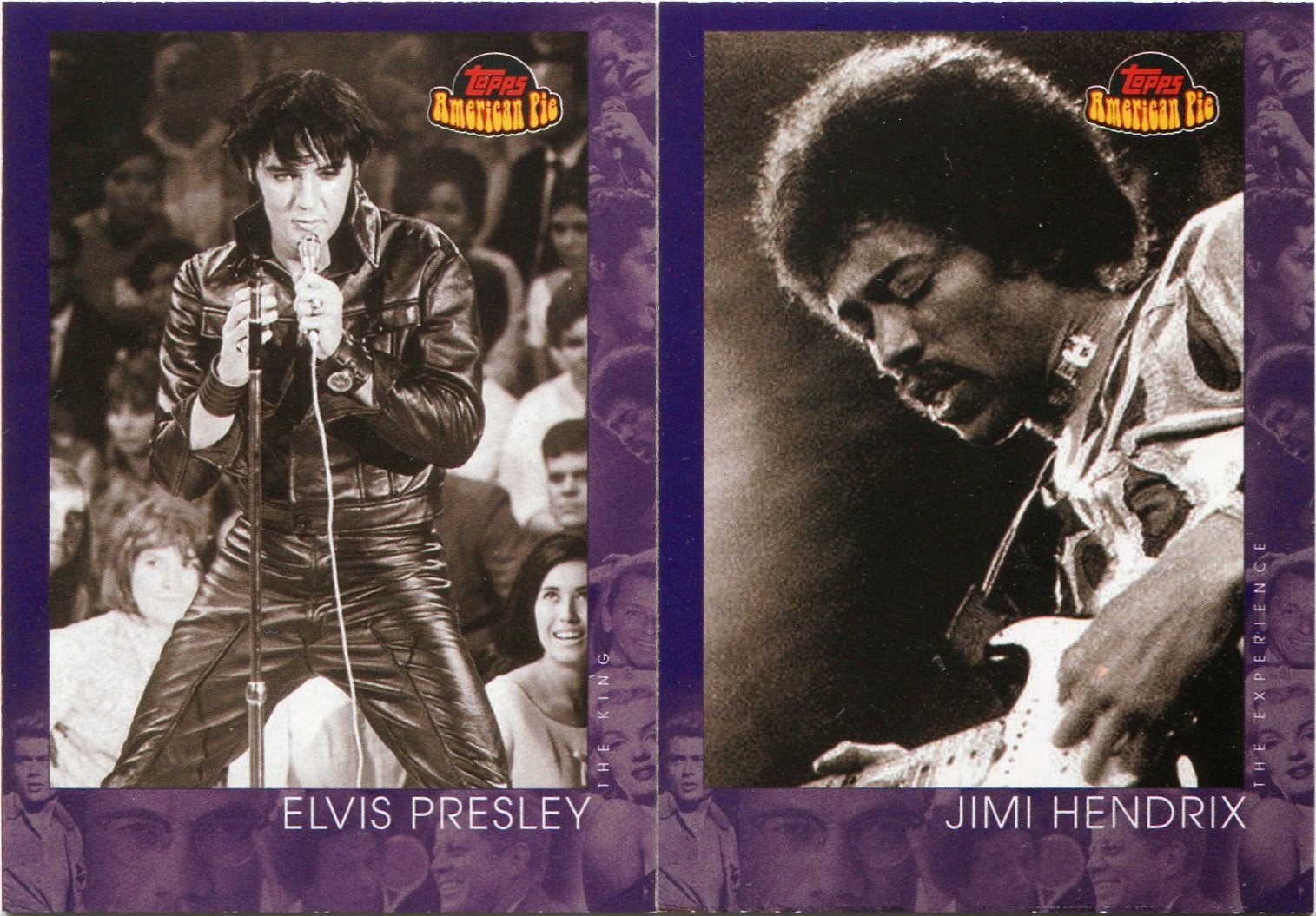 I don't think there's much denying that these are two of the biggest icons of the music industry.

Elvis put rock n' roll on the map more than pretty much any other artist, and Jimi Hendrix took guitar playing to a whole other level. I'm not good enough to even dream about playing any of his licks.

That's way out of my talent range. 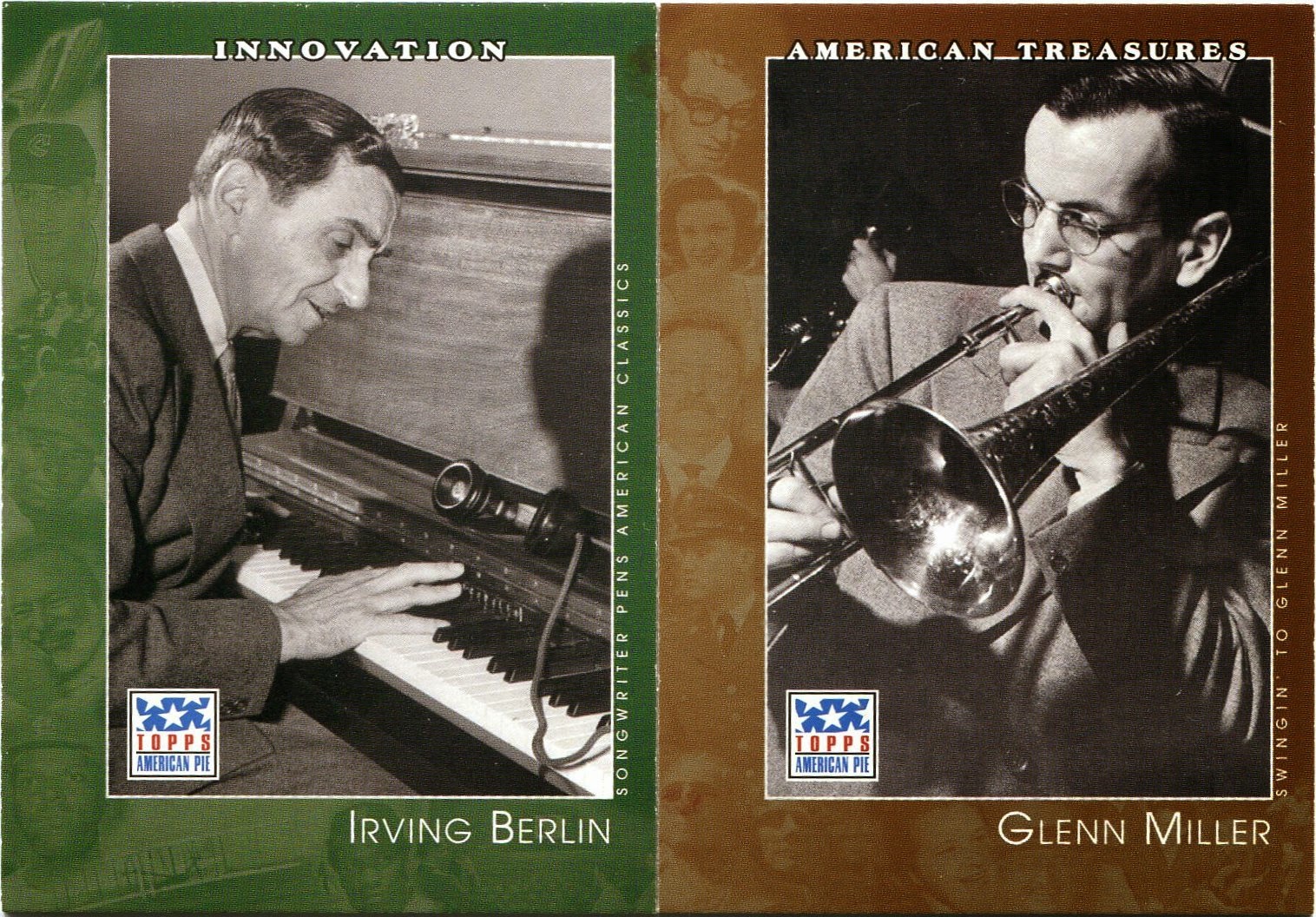 I can't say I listen to much pre-rock stuff, but I know the bigger names from the past thanks to my dad's expansive musical knowledge.

Glenn Miller is one of the more well-known figures of the big band era. With famous tunes like "White Christmas" and "God Bless America", Irving Berlin has a catalog of over a thousand songs. That's mind-boggling to me.

I have a hard enough time writing one. 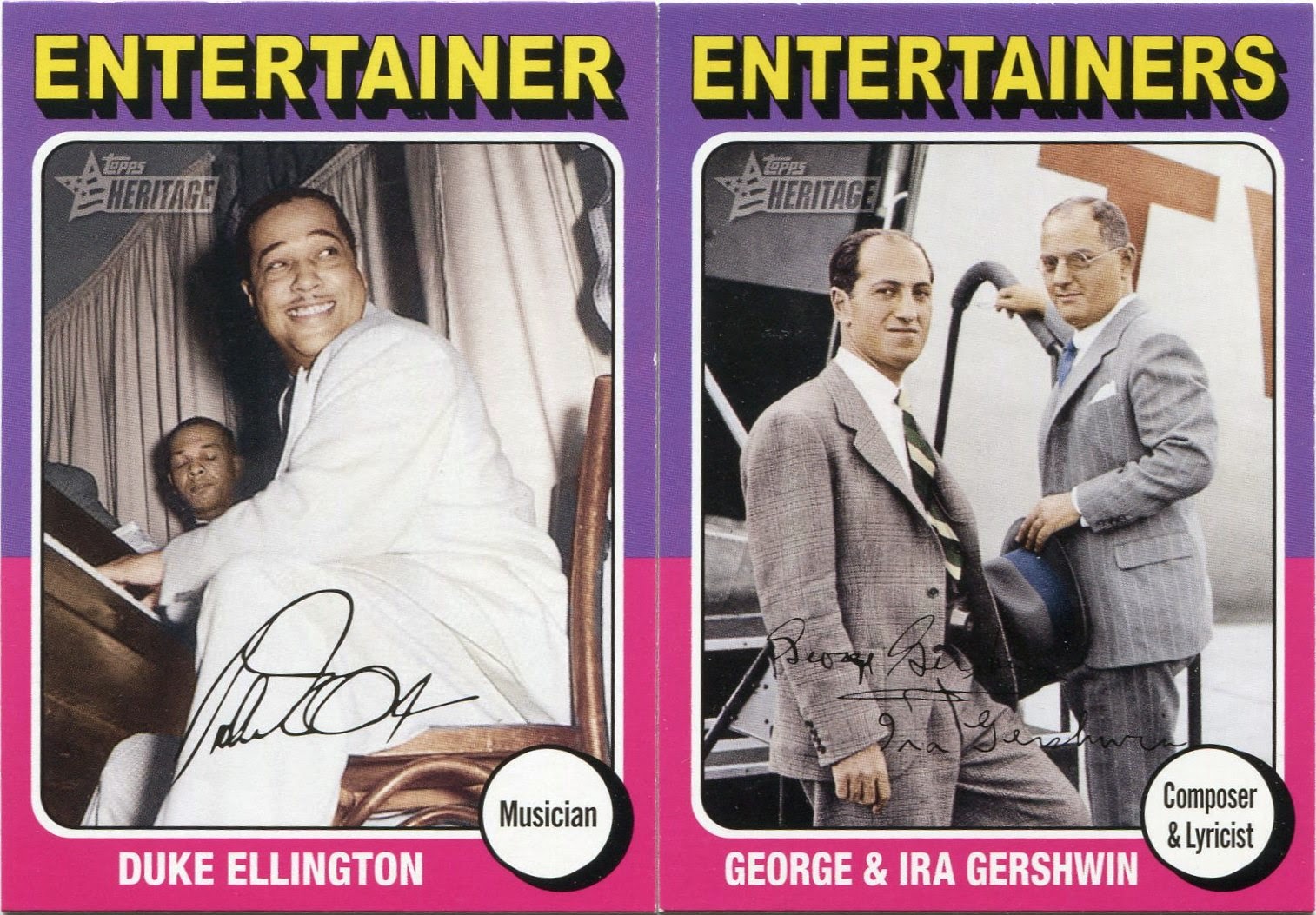 Each subset features historical figures on old Topps designs. American Heritage flew right past a lot of people's radars when it came out, but I still look at it as one of the greatest releases of the past five or six years.

I love seeing Flagship and Heritage on the shelves year after year, but this set was a nice change of pace. It fit so perfectly within my non-sport preferences.

It even featured a few musical icons on the memorable '75 Topps design. I managed to weave Duke Ellington into the paper I had to write for my history class this past semester, and I remember listening to the Gershwins' "Rhapsody in Blue" during the music class I took a few years ago.

If you're at all a fan of U.S. history, I encourage you to check out the American Heritage checklists. 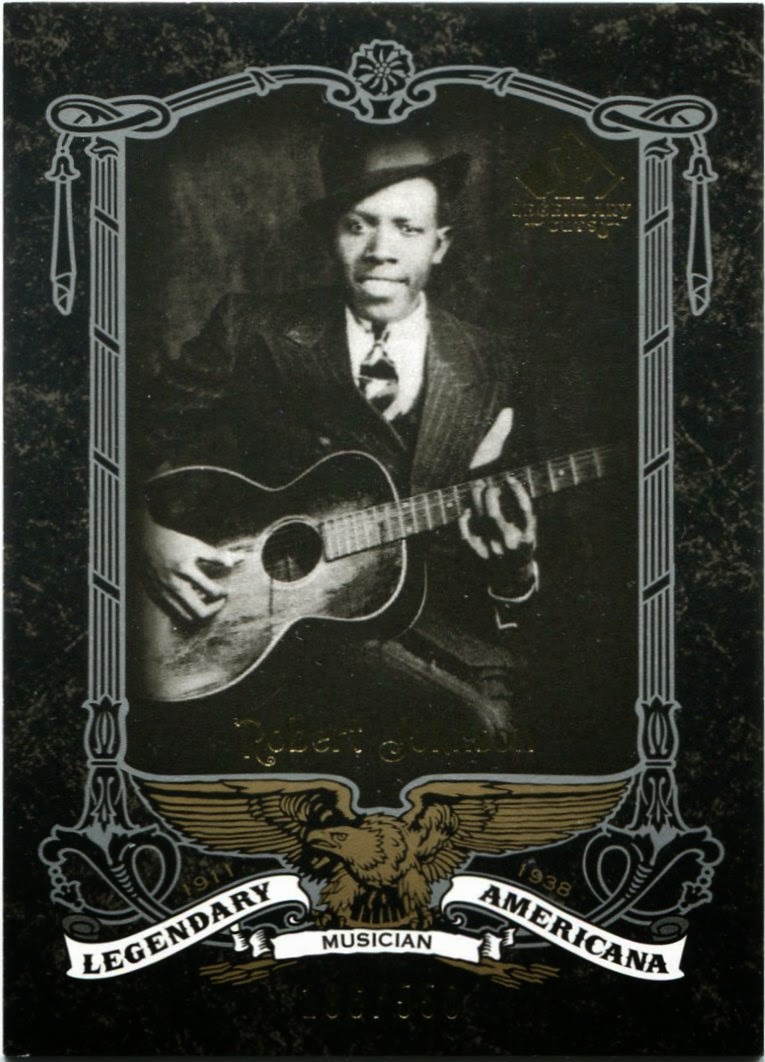 It took me more than five years, but I own 98 of the 100 cards from the 2007 SP Legendary Cuts "Legendary Americana" insert set.

This was among the first ones I tracked down. Though he died at 27, Robert Johnson was one of the more influential blues guitarists in history. Eric Clapton and a lot of other artists have covered Johnson's "Crossroads" tune.

Plus, I remember my dad telling me that this is one of only two known photos of the old blues star.

That makes it a million times cooler in my eyes. 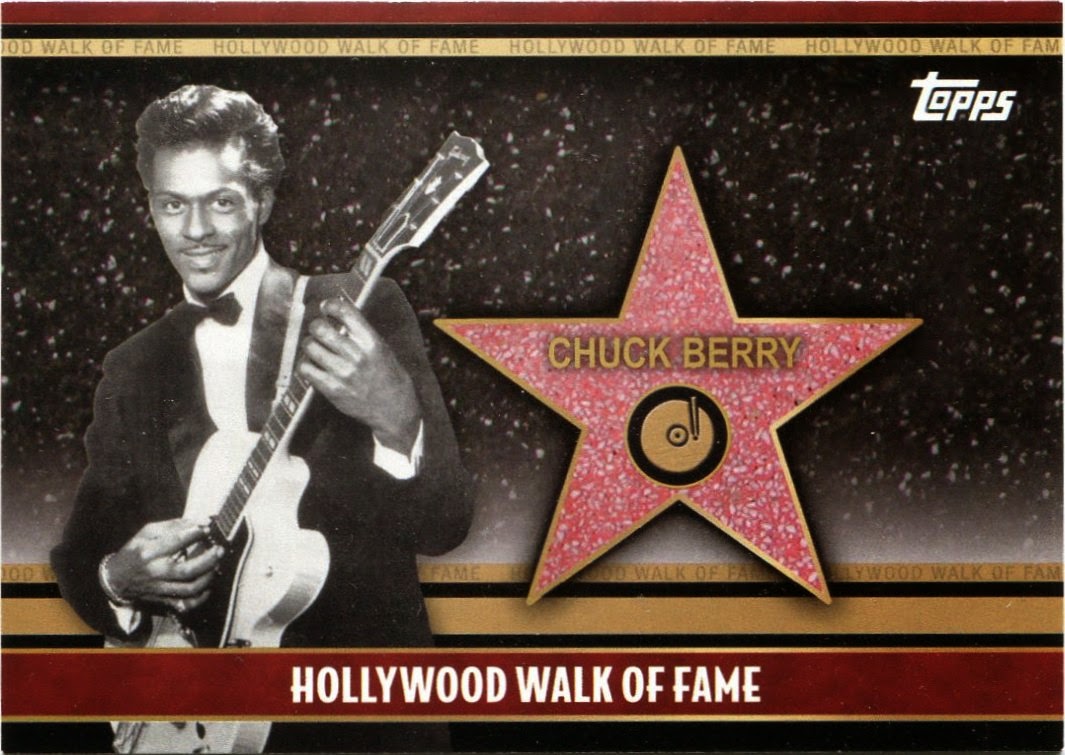 As far as I'm concerned, the absolute best source for musical cardboard comes from the 2011 Topps American Pie checklist.

It was a revival of the old American Pie brand. Unlike the original releases, however, this recent release was almost entirely comprised of non-sports figures.

Like American Heritage, American Pie didn't get a lot of airplay when it hit the shelves a couple years ago. I was still a rookie blogger then, but I don't remember many other people talking about it at the time.

As for me, though, I went out and bought the entire 200-card set within days of its release. I received it just weeks after I started this very blog.

Though American Pie features a slew of other American events and icons, I've never seen a set that better represents the music scene. 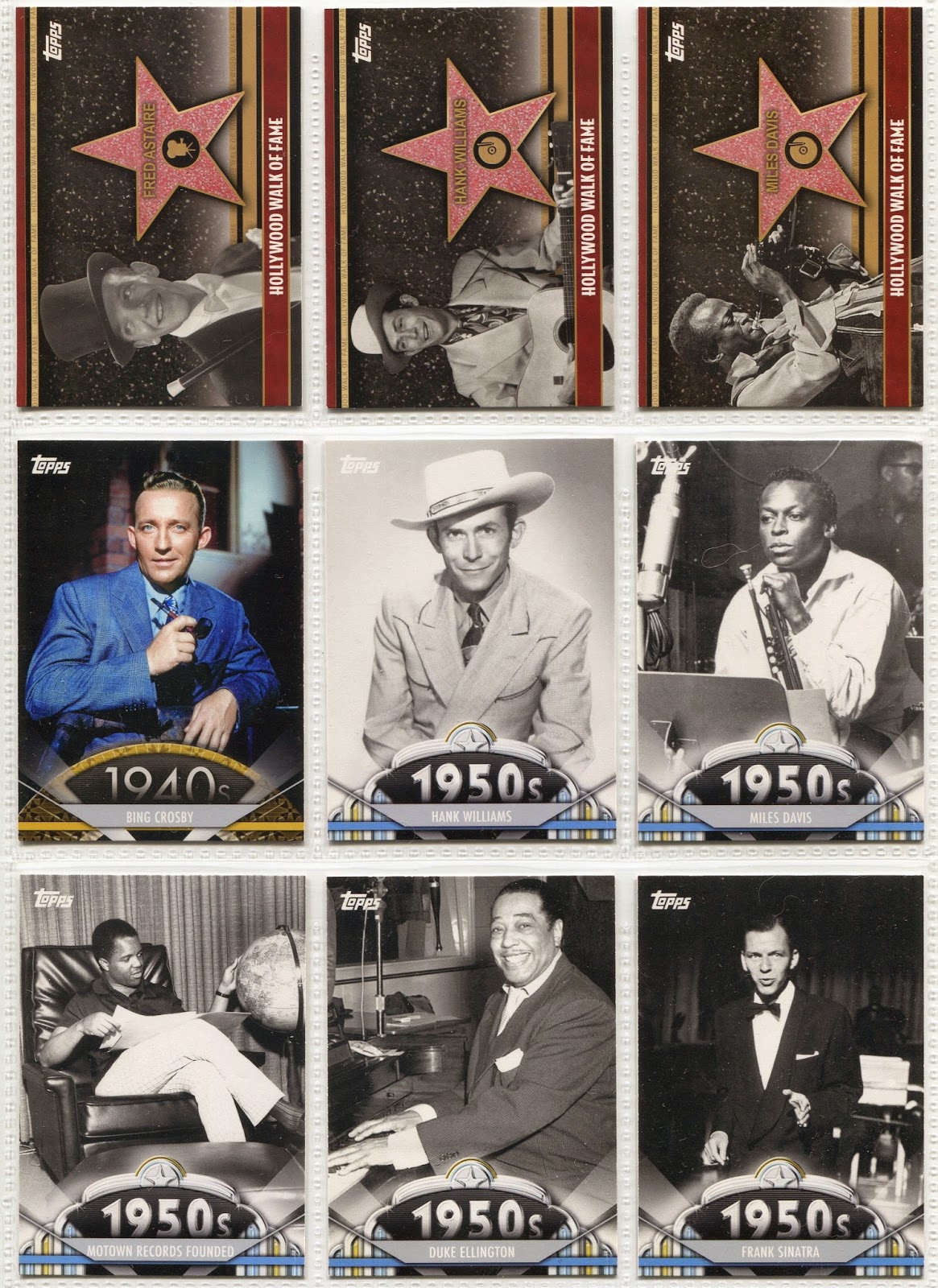 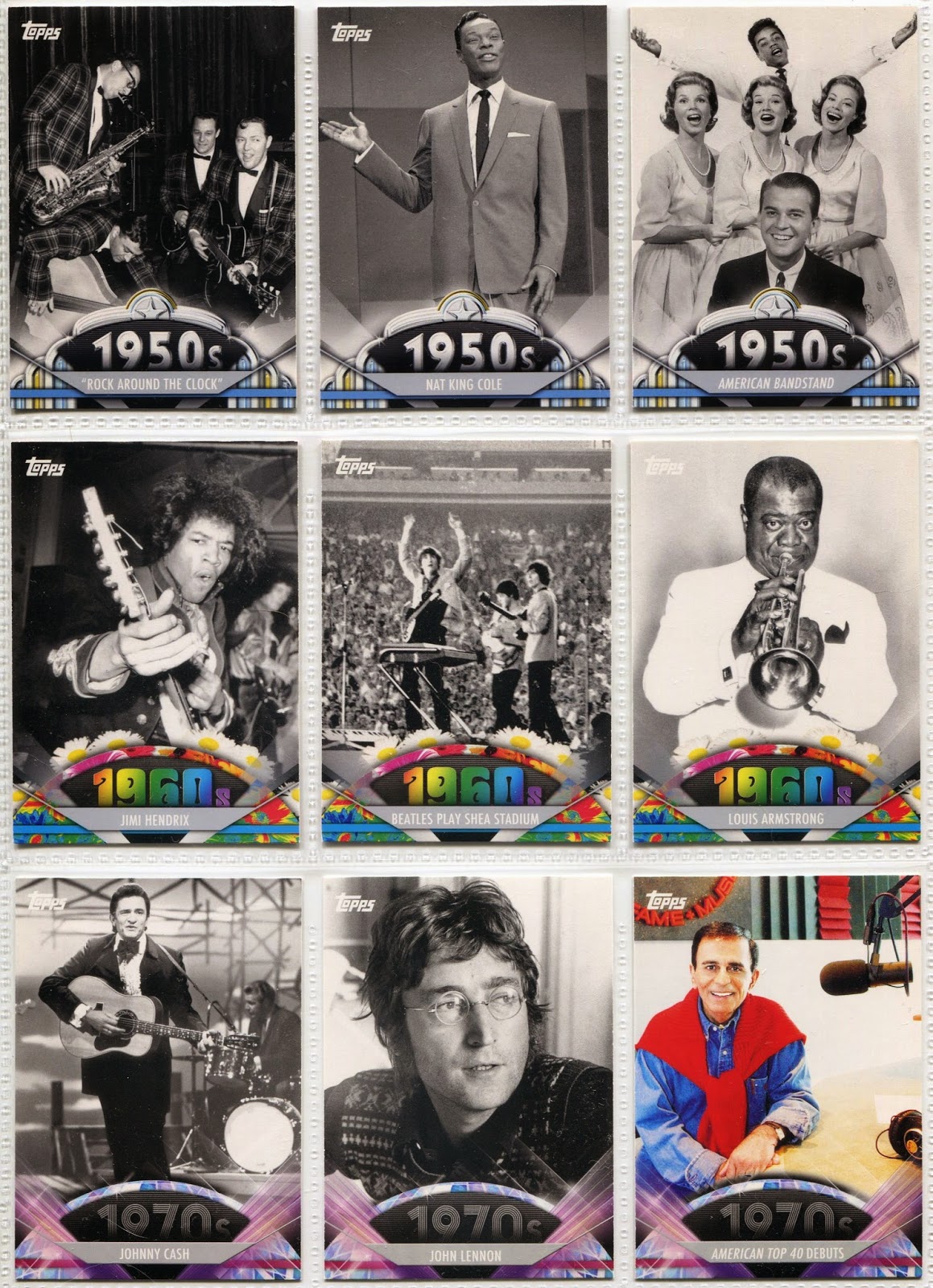 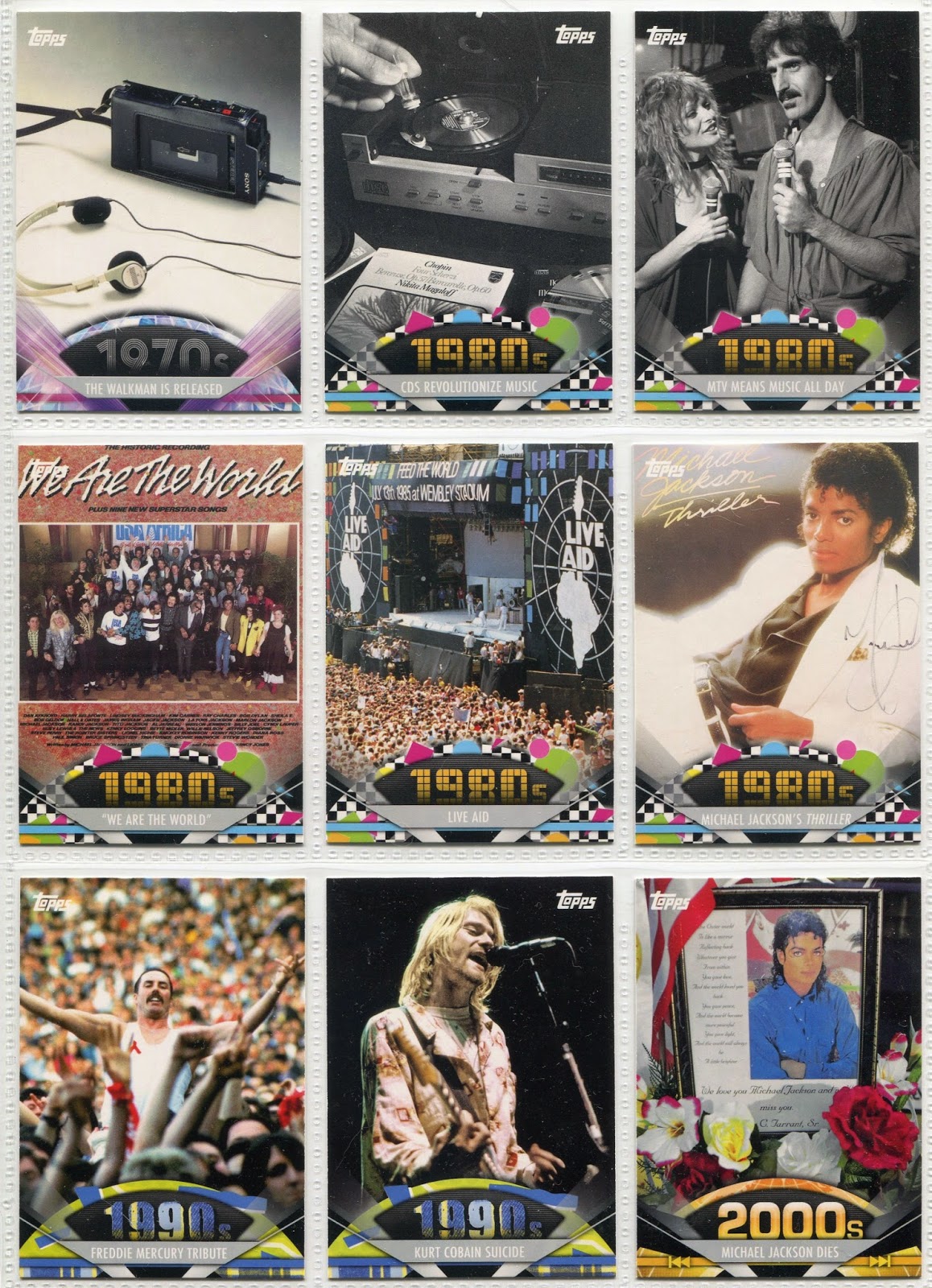 It covered just about everything. 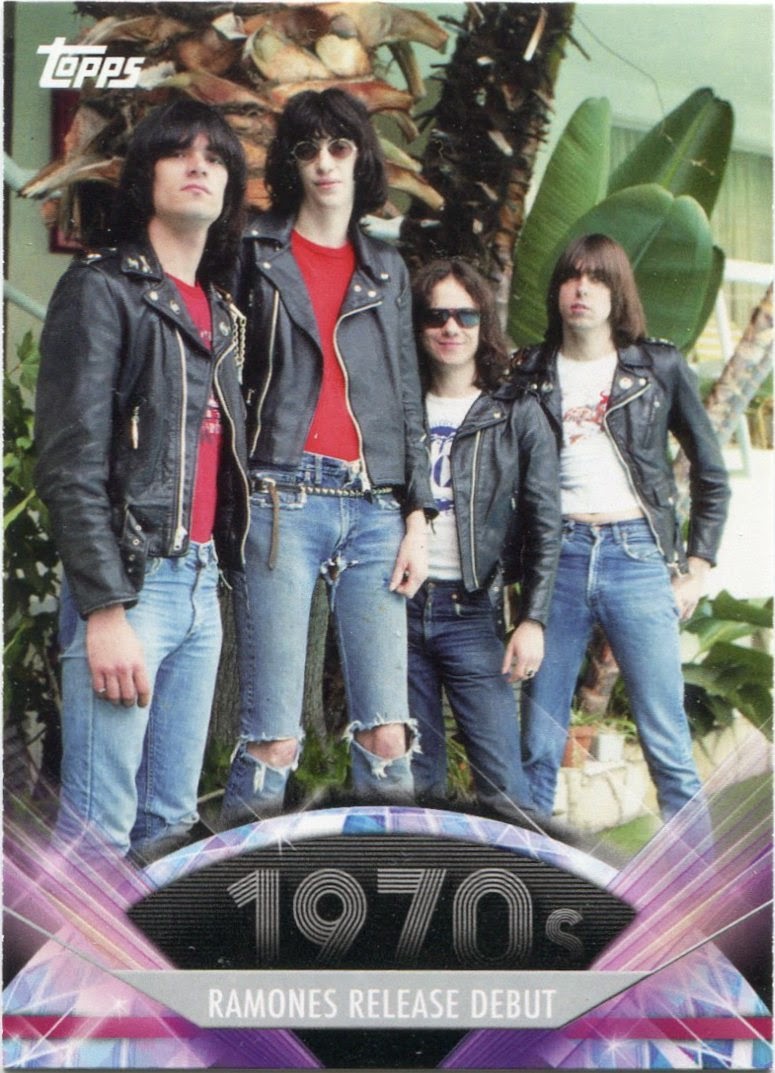 The distinction of my favorite band is a two-way tie between the Beatles and the Ramones. The Beatles, as I've already discussed, are pretty well-covered in the realm of cardboard.

This, however, is the only Ramones card I own. I don't think any others exist.

I actually just watched the Ramones documentary for the umpteenth time earlier this afternoon. Whether you like them or not, I don't think there's much denying that music would not sound the same without the Ramones.

I doubt I would've taken a crack at playing guitar without them.

Topps earned about a million brownie points in my book by releasing this card.

Since this is a music post and all, I thought I'd share some tunes that have been on repeat for me lately.

Because of how grand the music scope is, I doubt it'll be long until I find a few more.

I'm no guitar player, but I'm a music geek totally. I'd love to talk music sometime.

Very cool. I've got to track down the Robert Johnson card

Dang, I thought you had found an MC5 card!

I used up most of my Pro-Set Music cards by putting them into cassette tape shells.

I'll be breaking some of the early 90s Heavy Metal cards this summer I think. Mostly not my bands … but might make some fun cards.

Very nice post.
I'm somewhat shocked to see that Led Zeppelin has yet to be immortalized on cardboard. And Jay-Z too considering that he's got pretty strong ties to the Yankees.

Excellent post.
I too, have made music a huge part of my life, and have played gigs at some of the finest biker bars in the Northeast.
Over the years I've played everything from Chuck Berry to Marilyn Manson...and yes, even the Ramones.
Great stuff.

Great post! I'm a huge music fan too. One of the coolest sets is the 1985 Rock Star Concert Cards set. It contains a lot of the bands I grew up listening to like: The Police, AC/DC, Pat Benetar, U2, Stray Cats, and Hall and Oates. There are also several cards of The Rolling Stones.