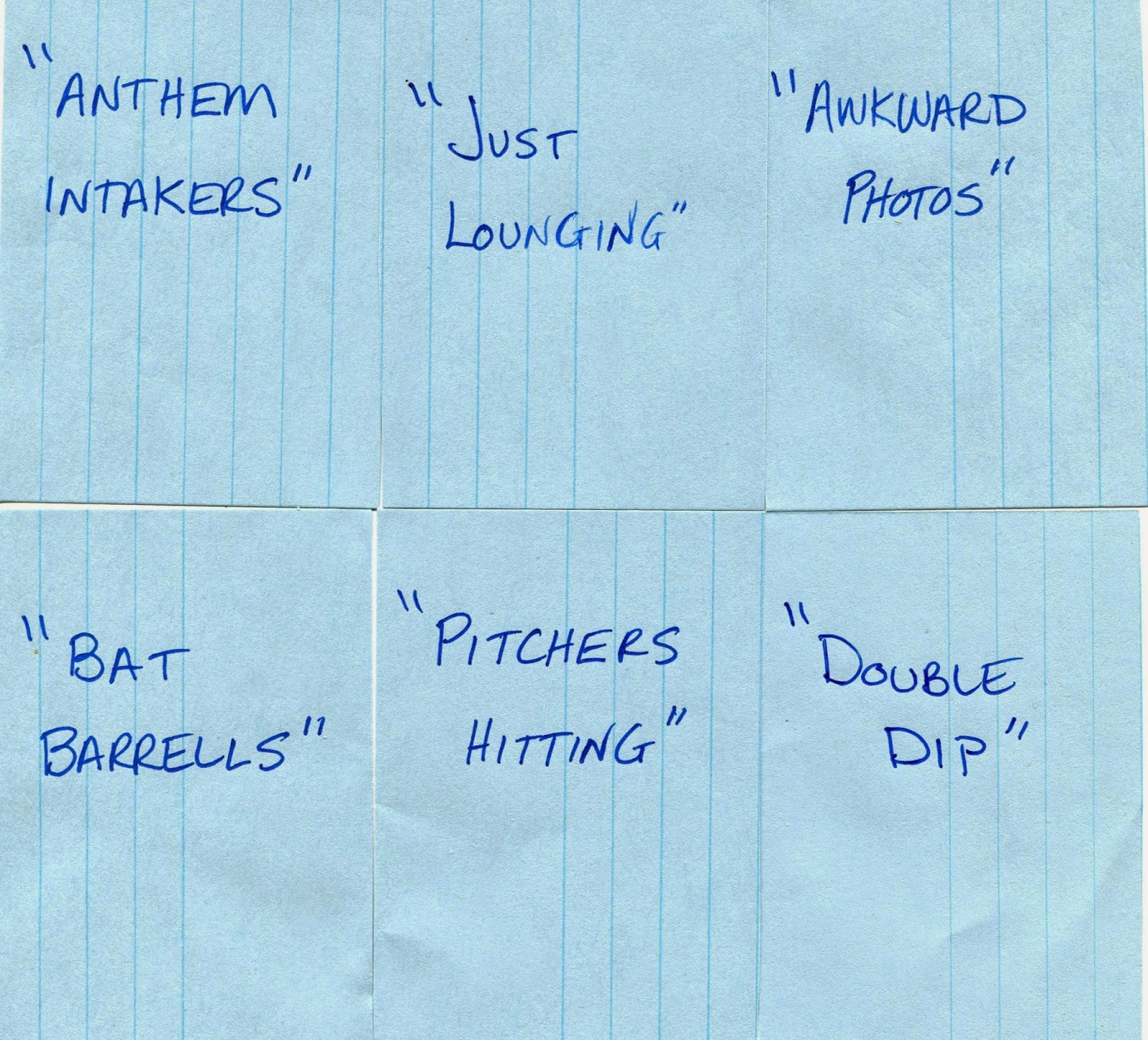 I thank you for attending tonight's featured play. In it, you will hear the tale of one wacky baseball card collector and the amazingly generous flat rate box of cardboard he found on his doorstep a tad longer than a fortnight ago.

I call it "Baseball Card Theater".

The man responsible for this wonderful act goes by the name of Wes W., a dear reader of this blog and the man who helped crack the code of the mysterious Ty Cobb oddball this dime box lad found at a recent card show.

His gracious help on solving such a case would have been more than enough. This brimming flat rate box simply added to the striking generosity of this Wes fellow.

Inside, our dime box subject found each section divided into distinct "acts". The creativity that people continue to put into trade packages still blows him away.

It became apparent from the beginning that Wes cemented himself as the star of the show.

Open the curtains, my friends, and enjoy the latest hit from Dime Box Productions. 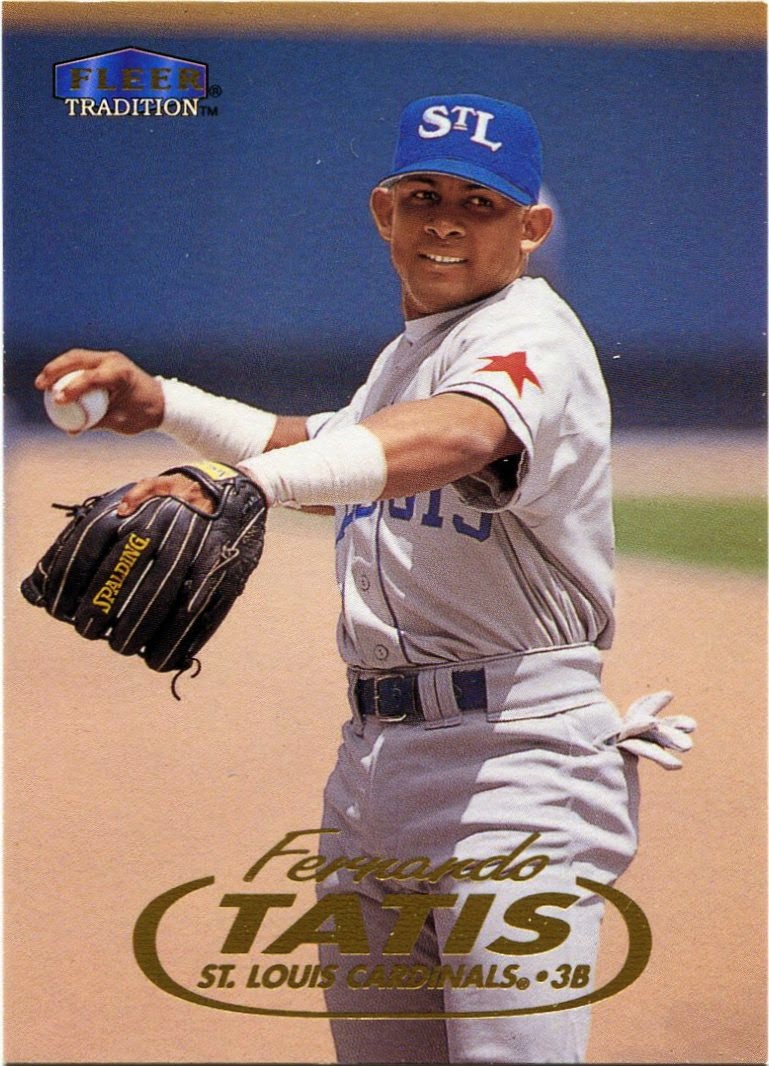 The play begins with the spotlight on a young fellow from St. Louis.

You enthusiasts may recognize Mr. Tatis as the only man to hit two grand slams in a single inning. It is still one of the grandest feats in the history of our National Pastime.

With this card, however, the spiffy St. Louis Stars throwback uniform stole the show. 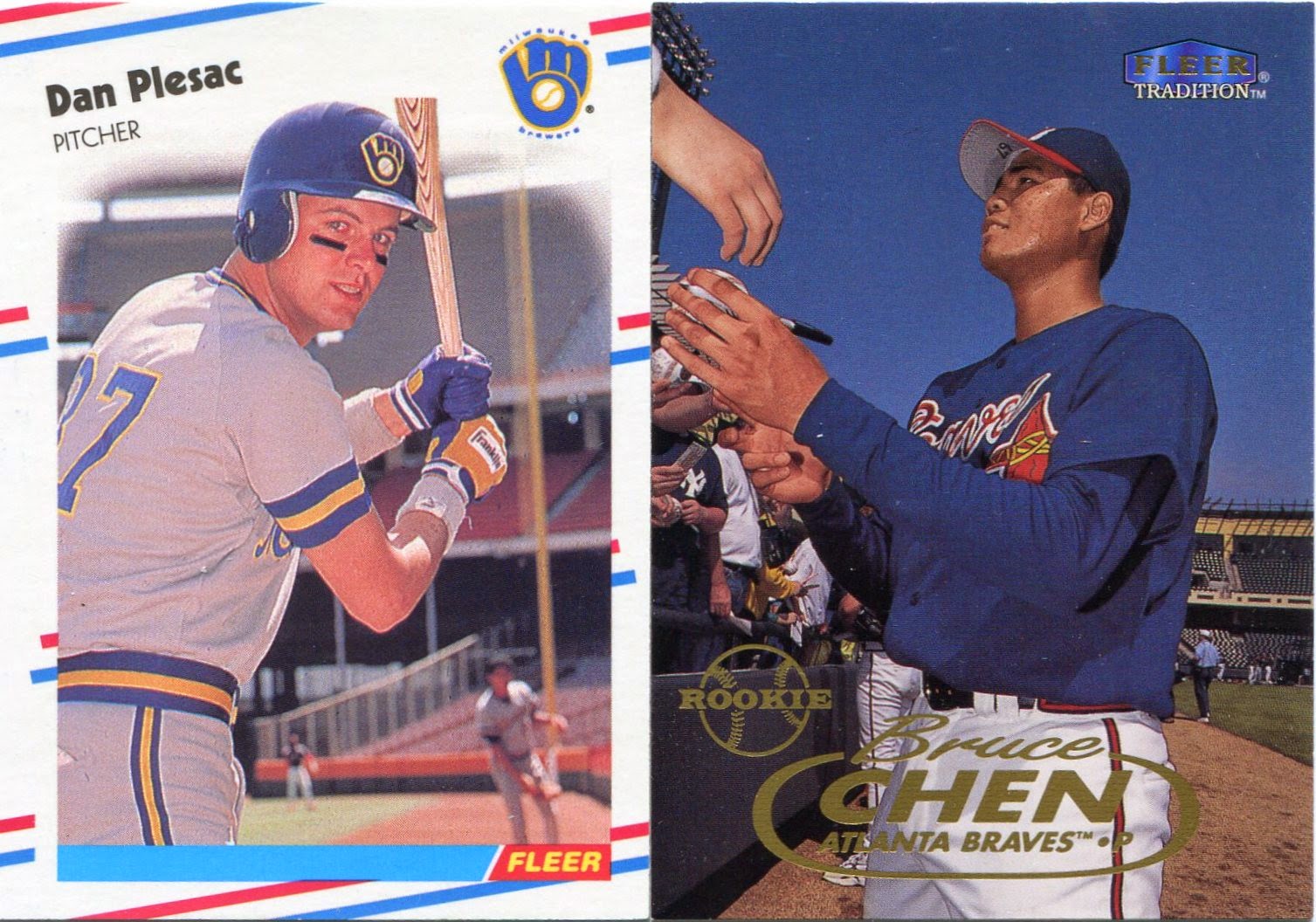 In the second act, Wes introduced the curious case of Dan Pleasac.

The good man enjoyed a stellar 18-year career, yet amassed a grand total of just 15 career plate appearances. None of those came with the Brewers, and he notched his lone career hit with the Pirates in 1995.

That failed to stop the playwrights at Fleer from featuring him with a bat in 1988.

Mr. Chen is still in the major leagues as of this performance.

His career in cardboard began with a terrific "autograph" shot 16 years ago. 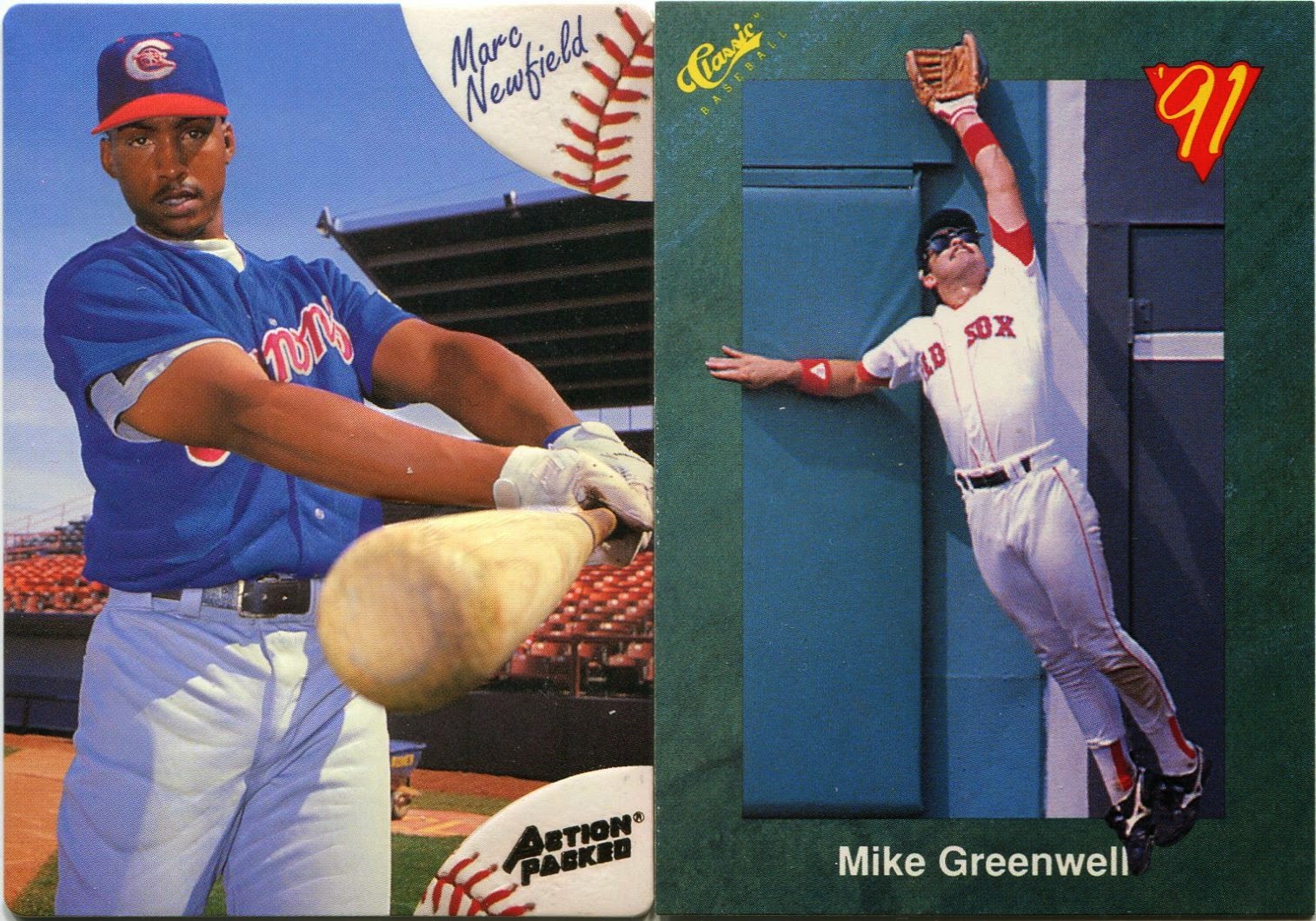 We here at Dime Box Productions are proud to make "bat barrels" an honored part of our play.

They don't get enough respect in the outside world.

Act V: Plays at the Wall

Methinks Classic is a vastly underrated source for splendid photography.

The audience receives a terrific shot of Lord Fenway's Green Monster there. 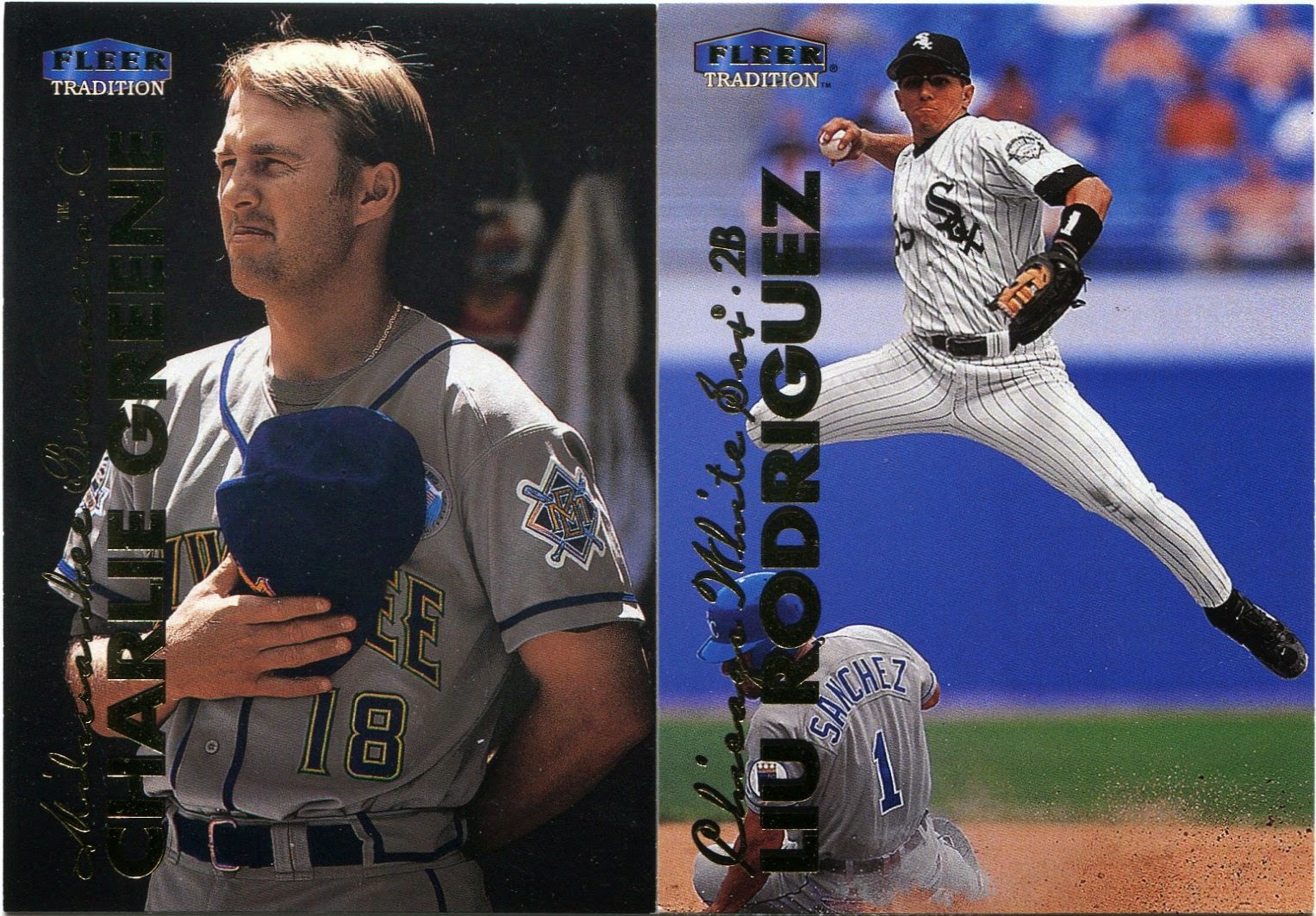 Wes continued his mini-collection rampage with members of our grand game enjoying the National Anthem.

They make for the most patriotic of cardboard.

The name of the honorable Liu Rodriguez does not ring a bell.

Despite the nifty double play photo, one would be hard pressed to remember his tenure with the White Sox of Chicago. 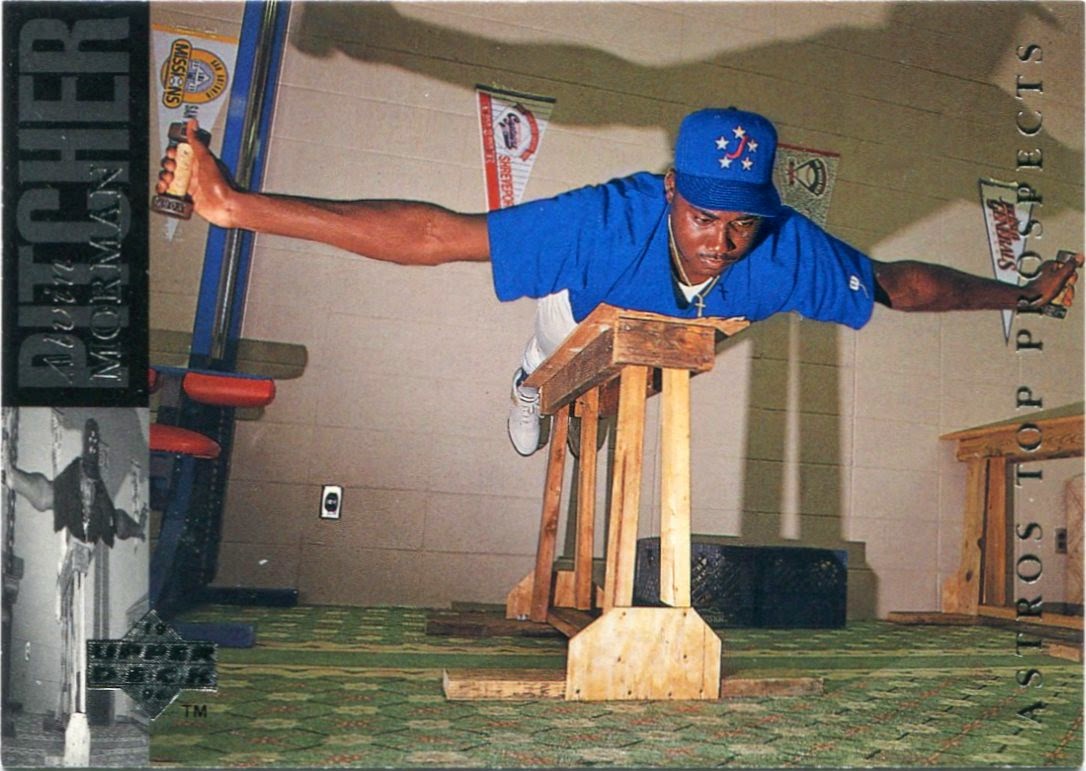 Wes strayed away from the mini-collection rampage and included quite a few other desirable baseball cards.

One must strengthen his muscles in order to do battle on the baseball field.

Much applause to those in charge of stage lighting for the wonderful usage of shadows. 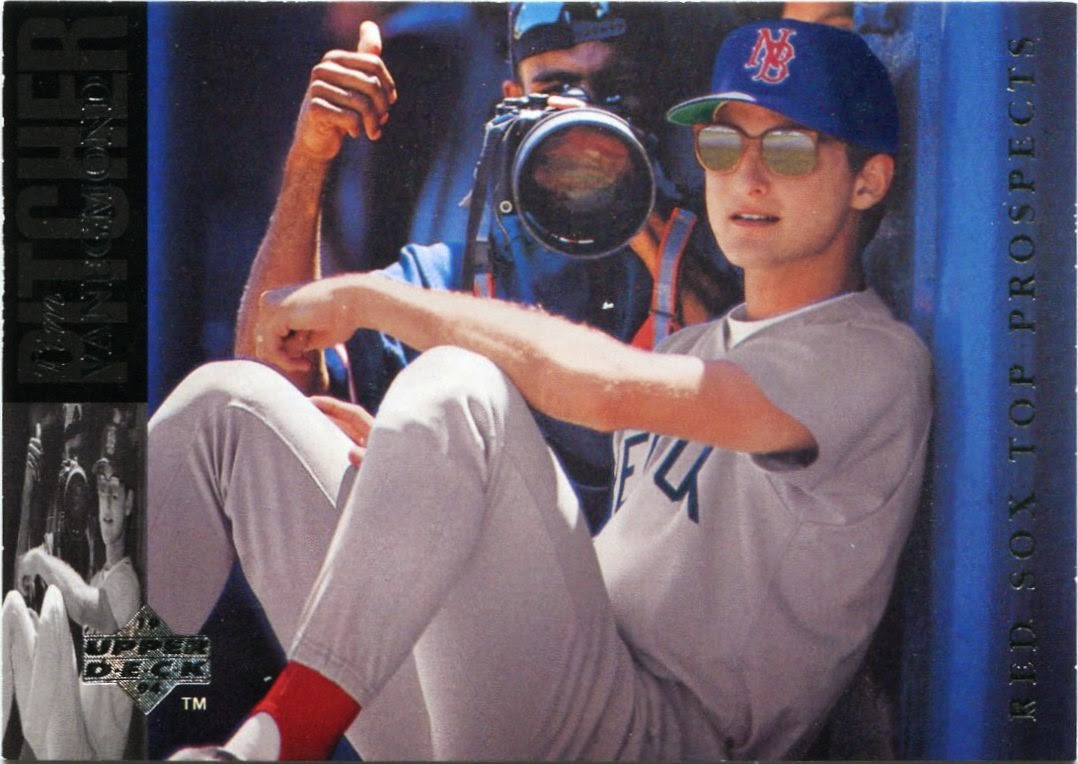 Minor league sets are a goldmine for candid shots like these.

The noble Wes proved as such with this wonderful array of cardboard. 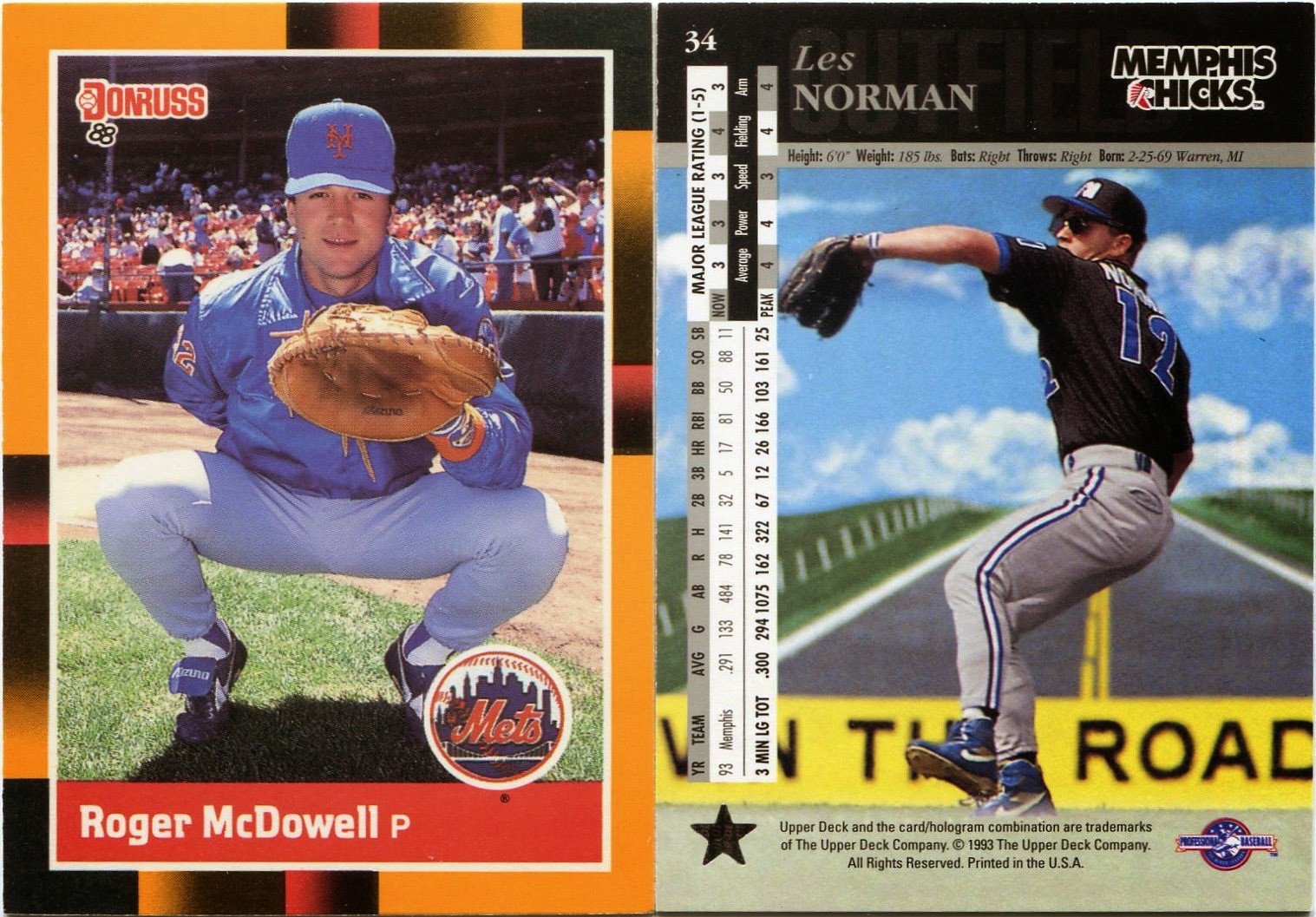 Act X: That's Not Your Job

You, sire McDowell, are a pitcher.

The job of the backstop is not yours to take.

What a perfectly terrific backdrop for an outfielder. Genius! 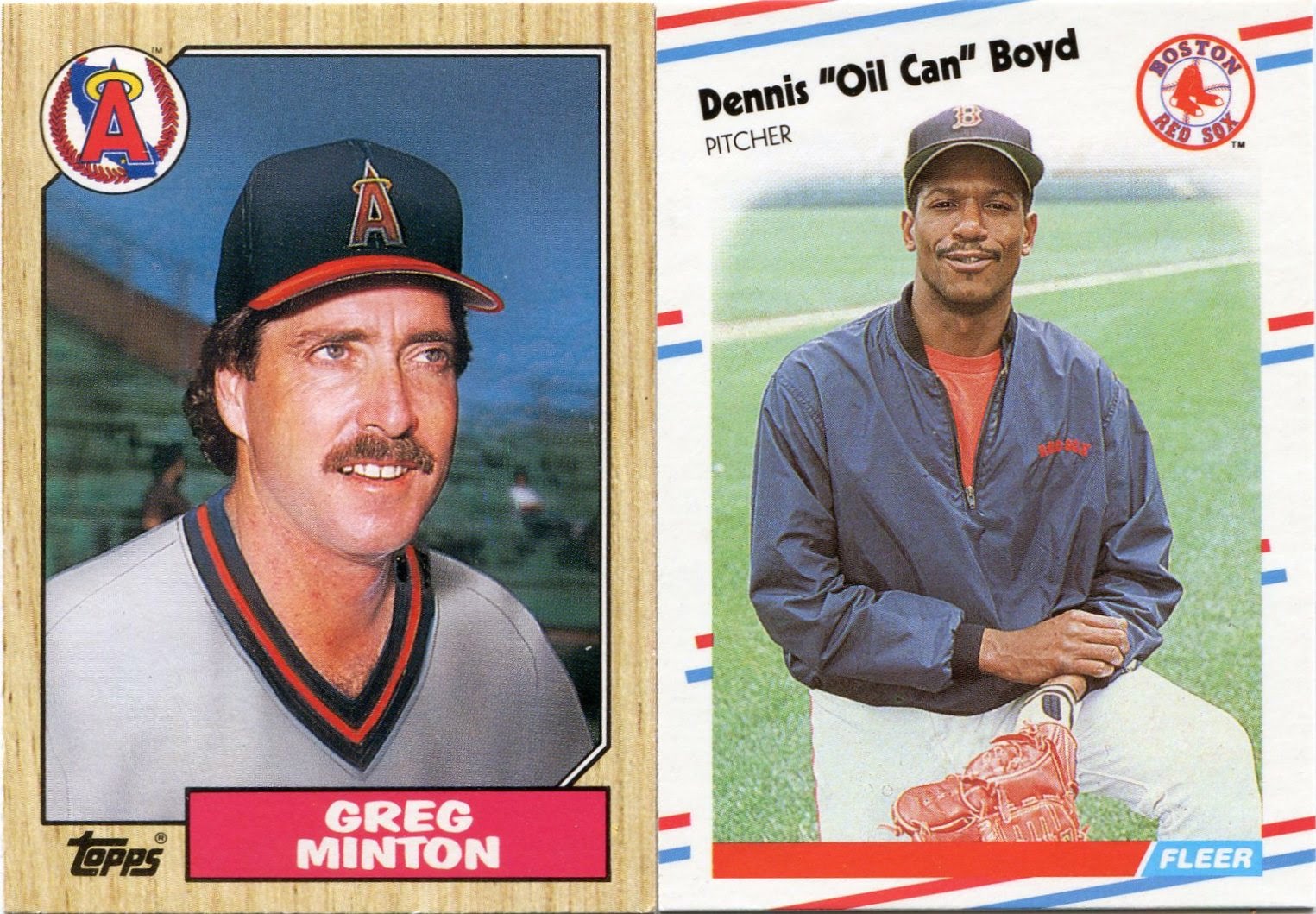 The honorable Wes has laid inspiration for a possible new mini-collection quest in the years to come.

That of the possibility of seeking out the most ghastly airbrushed cards ever released. I ask you, does Topps see us as fools?

You, sir Minton, are no Angel.

What spot is there for a man named "Oil Can" in this play? 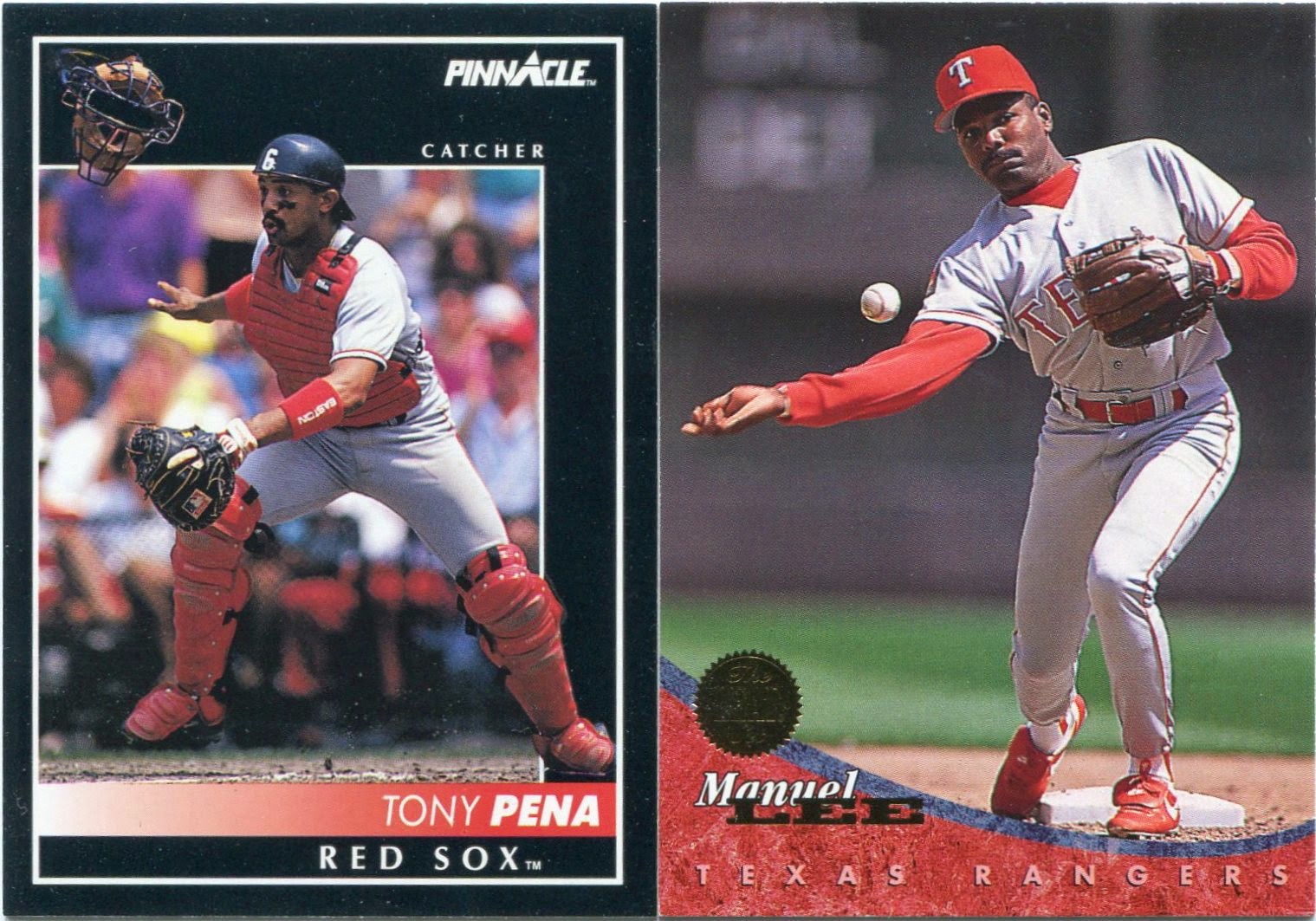 Now we know the true identity of that man behind the mask!

'Tis the royal Pena of Boston.

You'll have to excuse Mr. Lee.

He cannot handle the simple task of throwing a baseball on the grand stage. 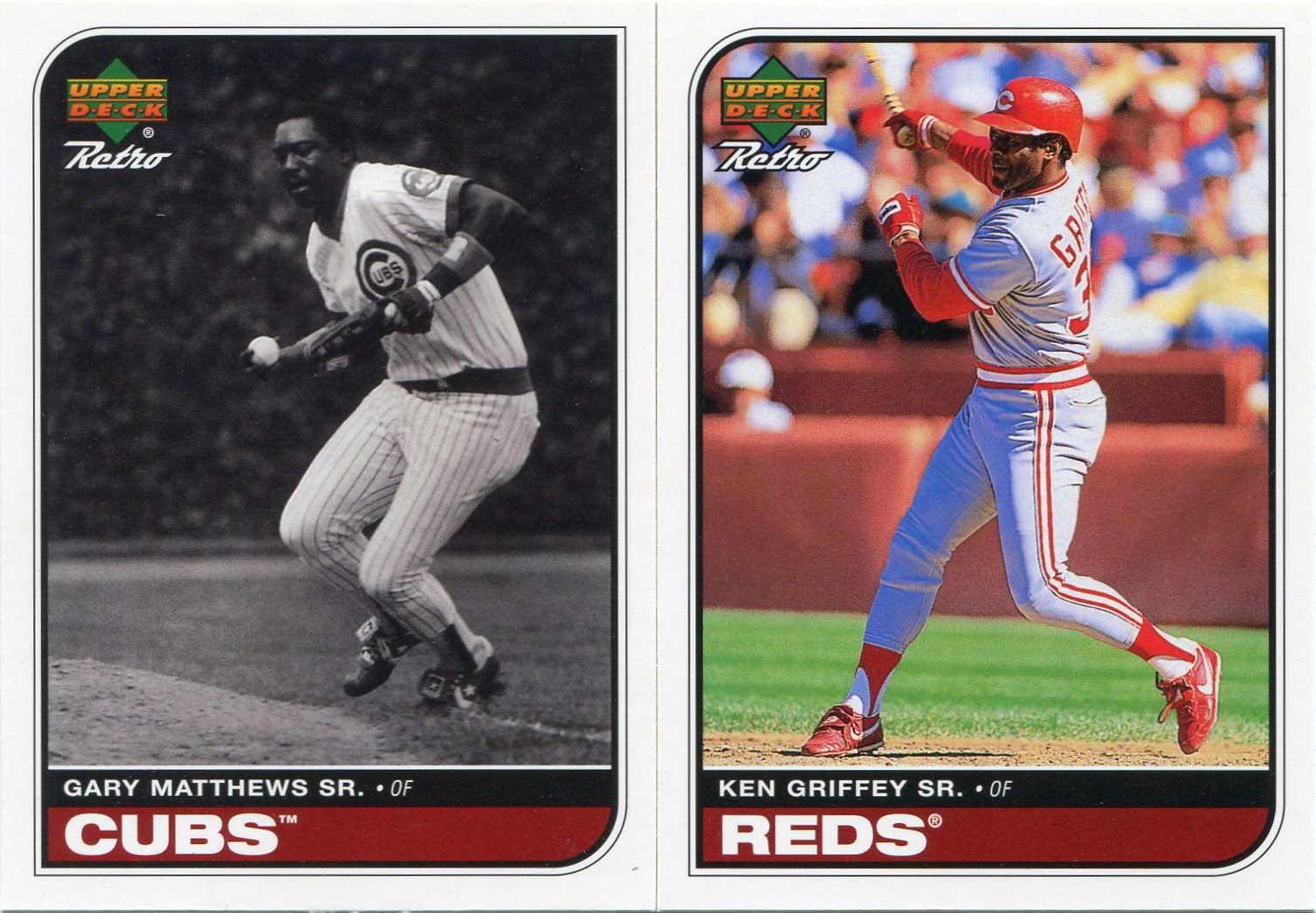 Our coveted stars of the show have arrived. 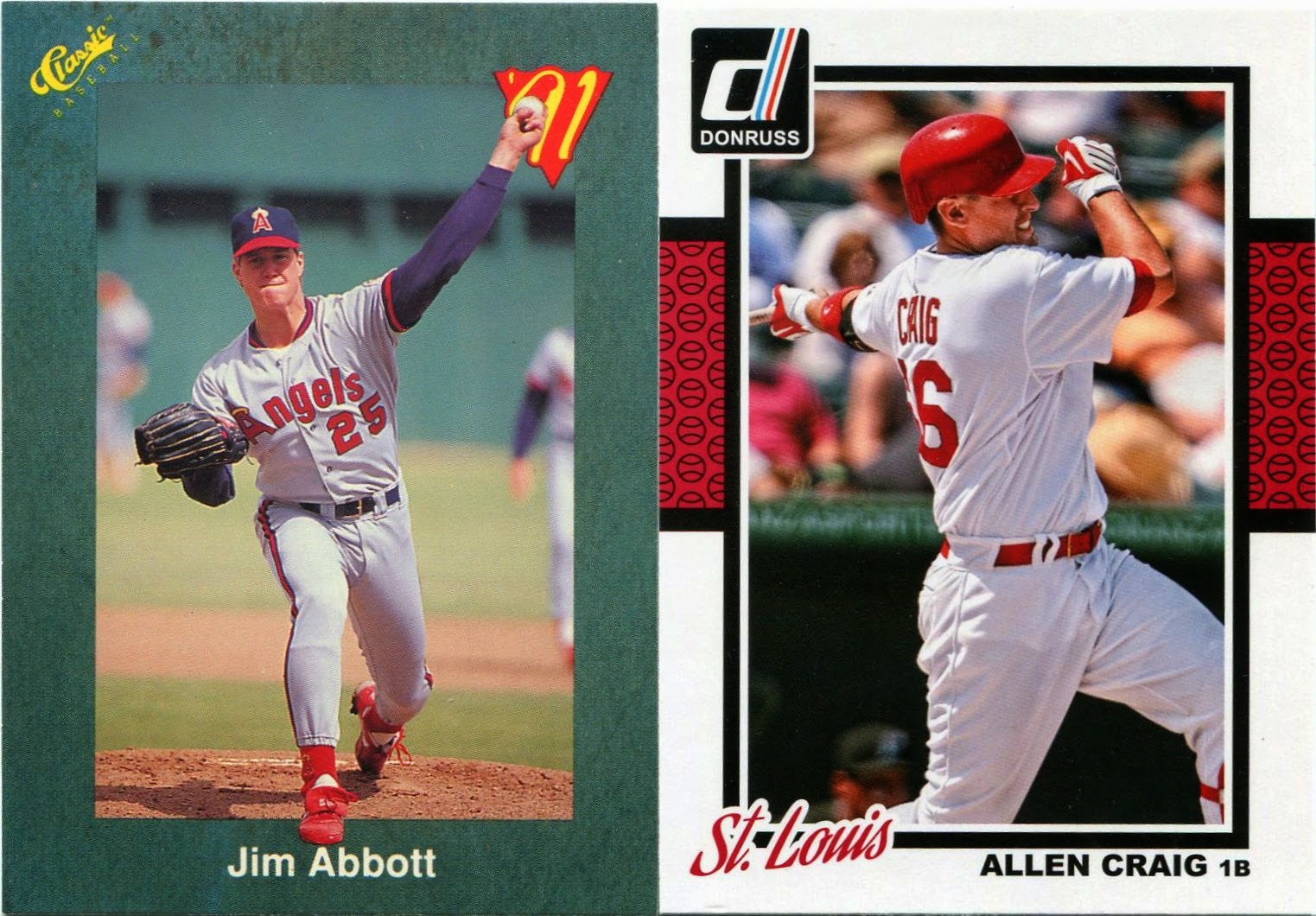 Wes, the masterful person he is, has payed attention to our past plays.

Masters Abbott and Craig are treasured members of the Dime Box Productions roster.

'Twas a delight to see them appear from the reaches of the flat rate box. 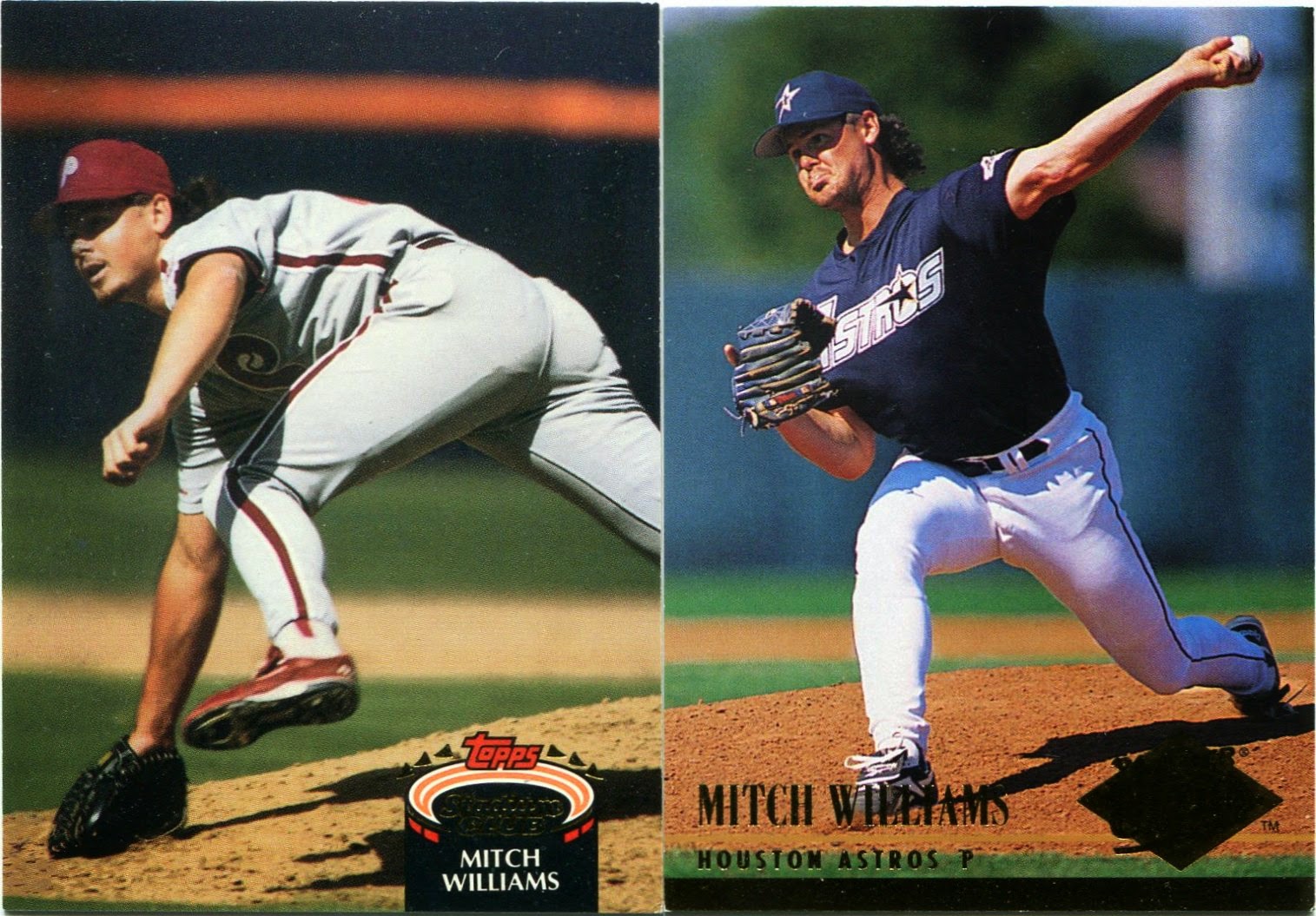 Just who is this "Wild Thing" fellow?

Seeing as how Wes devoted an entire act to his likeness, I assume that he is an up and coming member of the circuit.

He'll have to cut his locks if he wants to advance in this business. 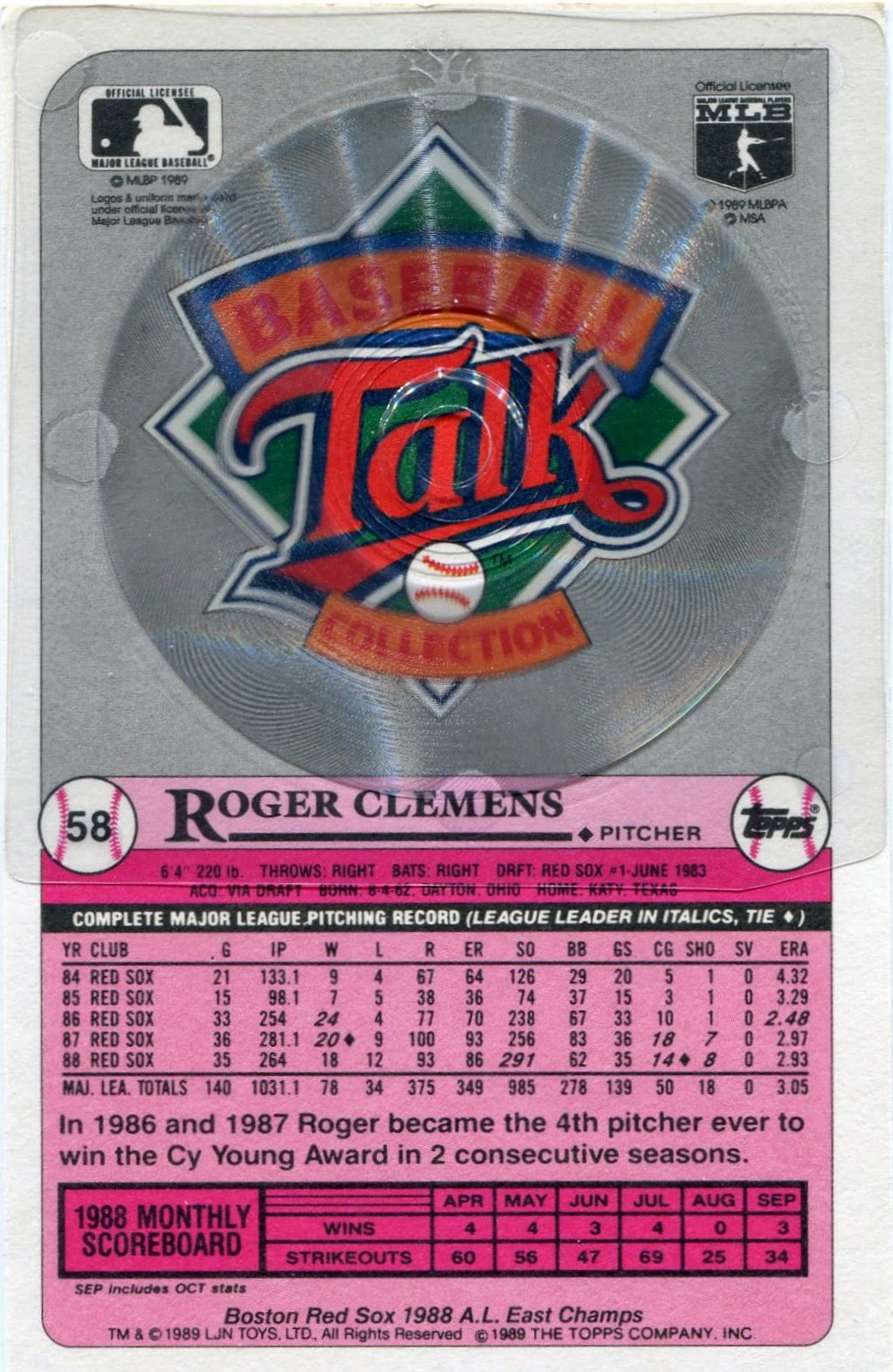 The final act of this play involves the faraway land of oddballs.

Wes included a bag full of knick-knacks for us at Dime Box Productions to enjoy. Most kind was this Baseball Talk piece of one Roger Clemens.

The reverse side of this rather large oddity includes an encased acetate record. (Here is a view of the front if you doth please.)

This is the first time records and cardboard have been combined the collection of Dime Box Productions.

I will have to borrow my father's phonograph player to see if it still works. 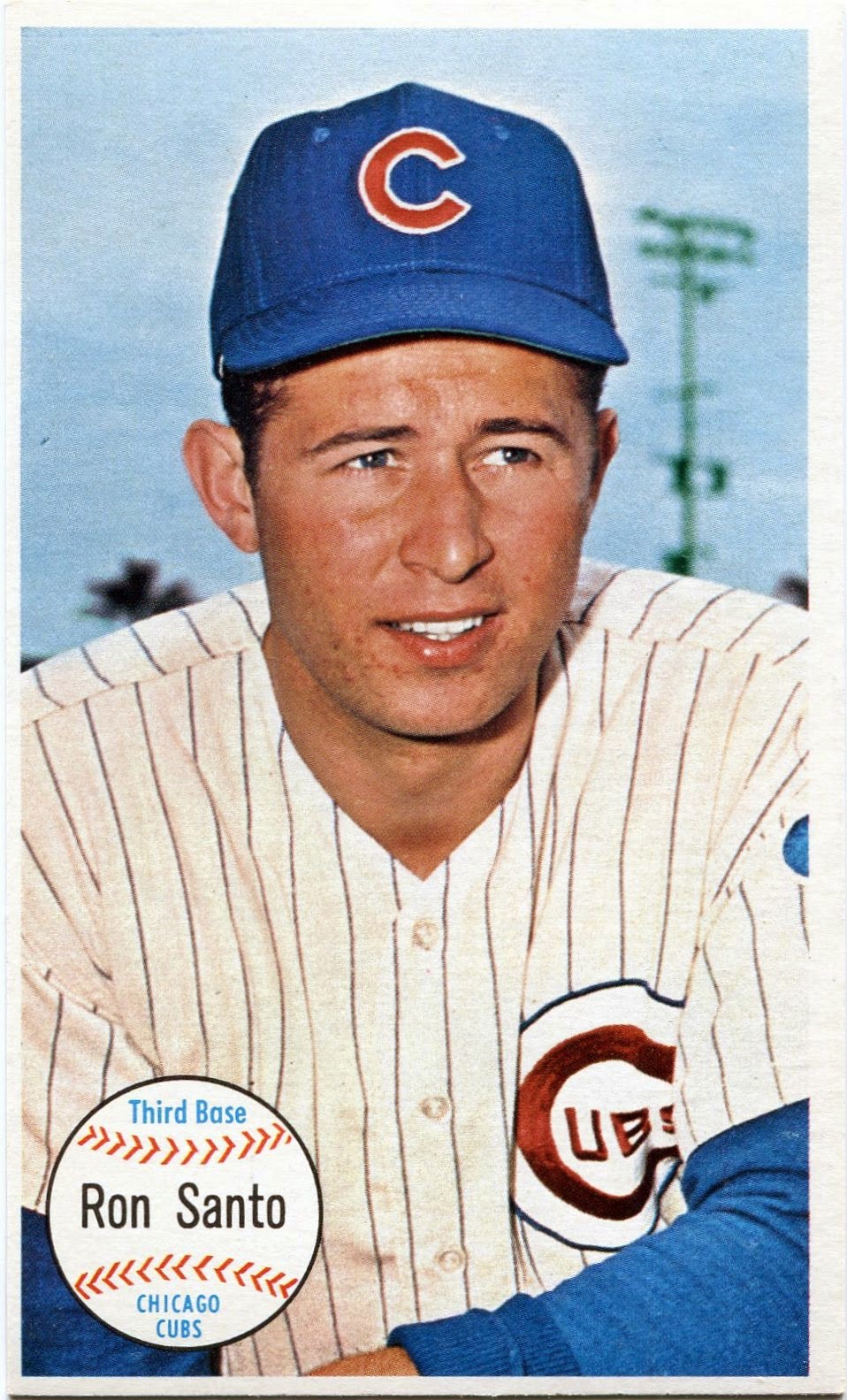 What would a play be without a surprise ending?

I hope the audience shrieks in delight at the sight of this Ron Santo oddball. It hails from the 1964 Topps Giants series, two score and ten years ago.

He is one of the most honorable men to suit up for the White Stockings of Chicago.

Please, dear audience, a large round of applause for the most fair and generous Wes. Alas, thus ends the most appreciated generosity of his generous donation to Dime Box Productions.

Please return to the next installment of "Baseball Card Theater" to find out for yourself.

Love the 64 giant set. Very underrated. I almost sent you that Santo card. Received your package today. Thanks a bunch

I think my first ebay purchase was a lot of three of the 1964 Santo's. I I paid 4 bucks and thought it was a steal.

I took a leak and bought popcorn between every act. It made for a long and salty night.