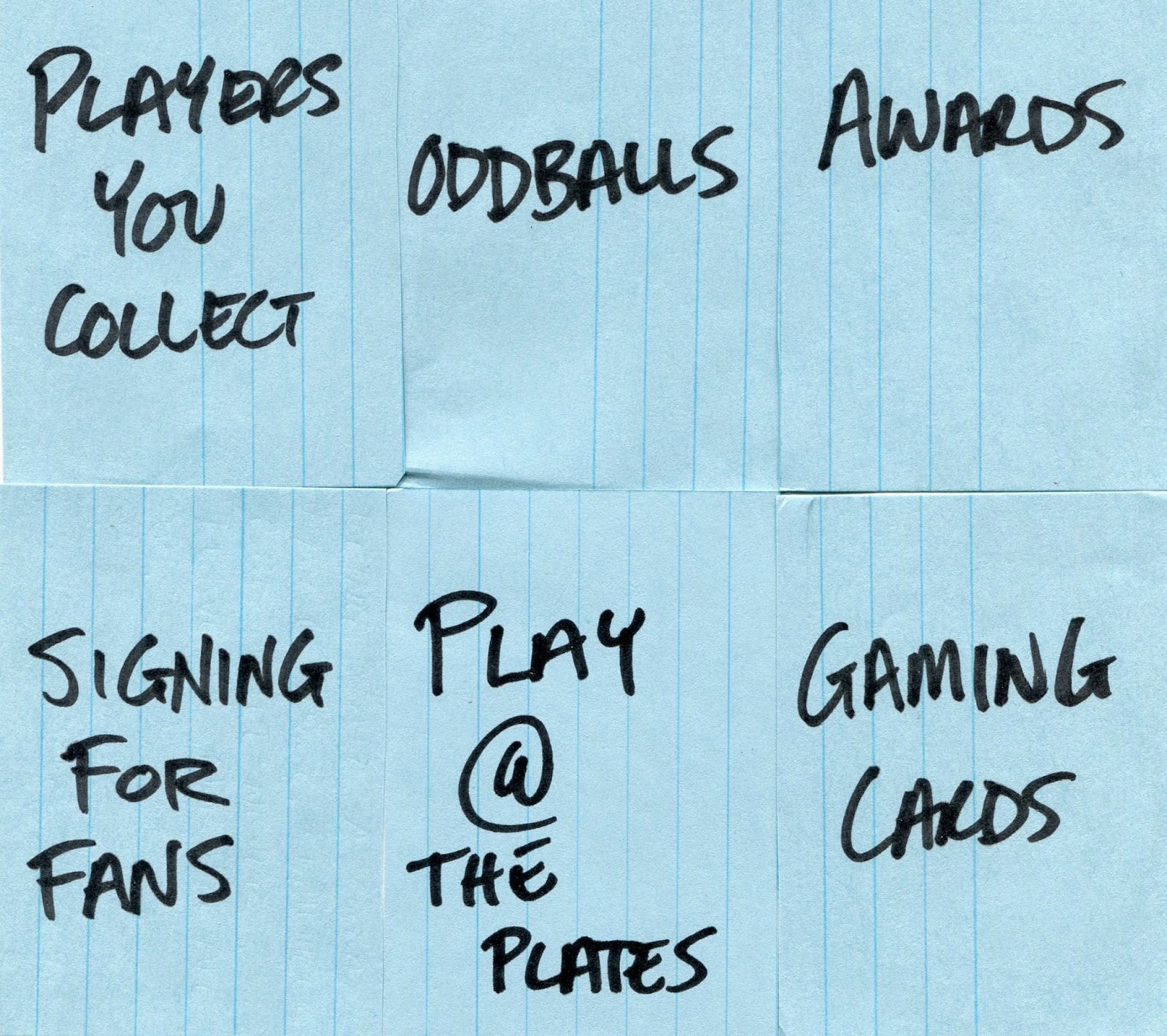 We here at Dime Box Productions have been taken over by cards sent by loyal reader Wes W. over the past couple days.

Shortly after that first glorious batch of cardboard arrived, we found another flat-rate box from Wes on the doorstep of Dime Box Headquarters. And, like the first group, he creatively divided each section into different "acts". You know what that means.

The show must go on!

'Tis sure to be a ravishing success. 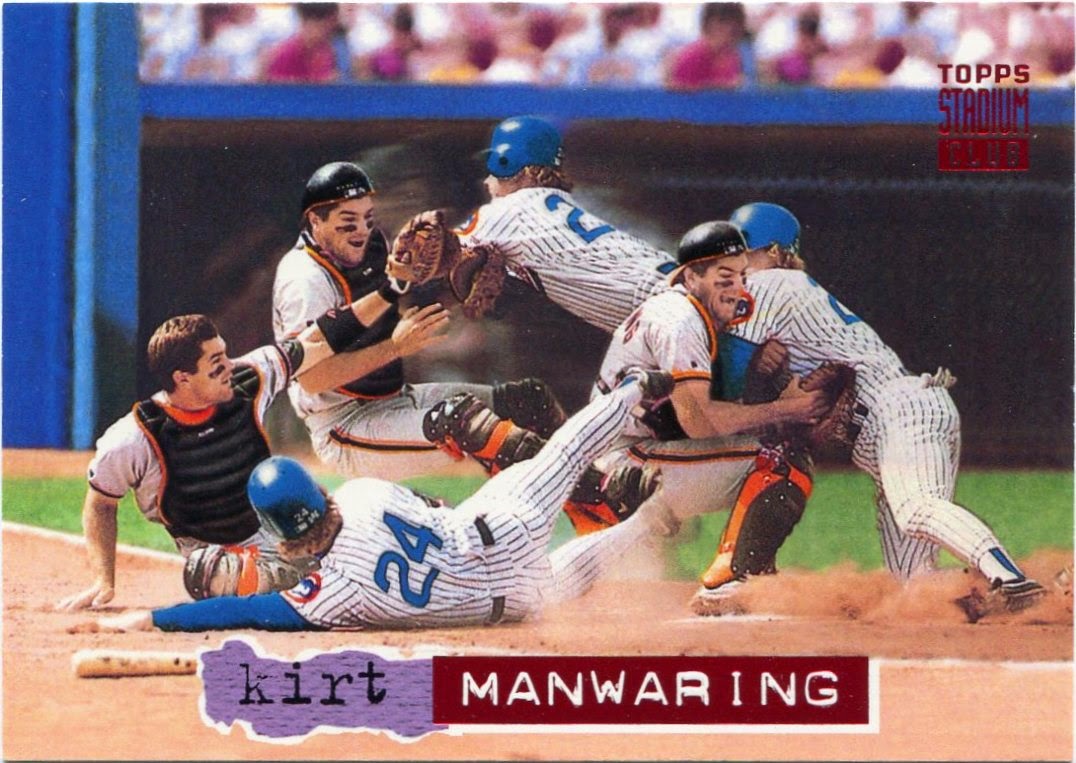 Act I: Plays at the Plate

The action began with one of the greatest cards unbeknownst to us at Dime Box Productions.

How this splendid "play at the plate" had gone undiscovered until now is a mystery for the gods.

Although it was included in the "plays at the plate" act... 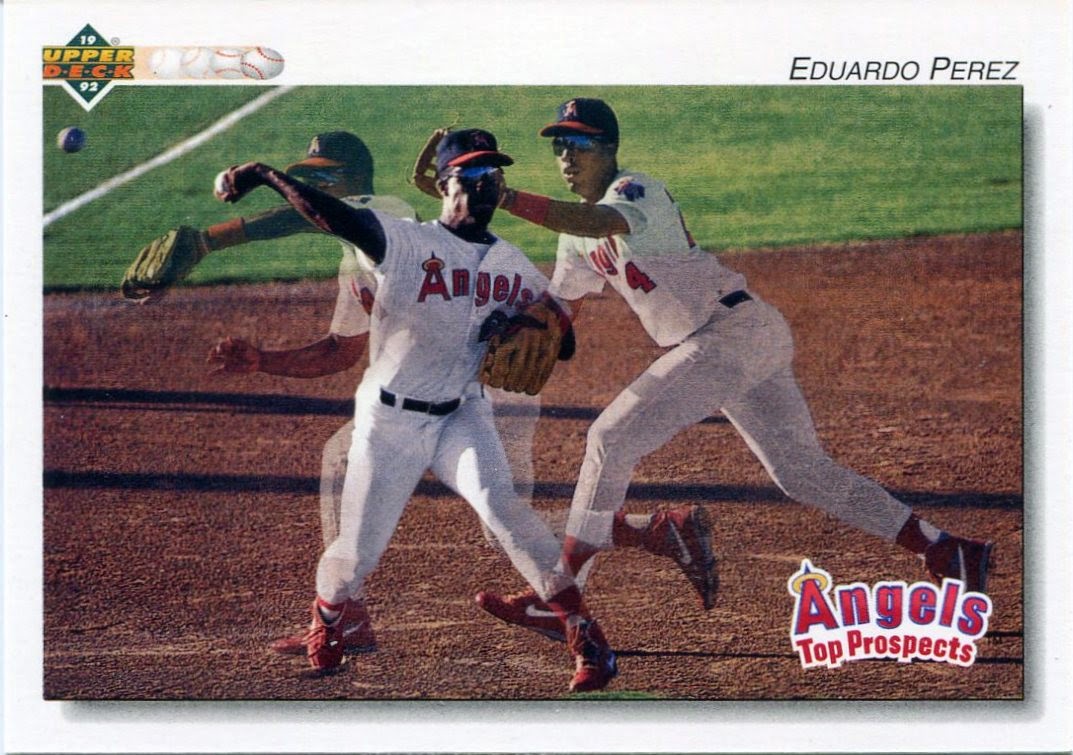 ...Sir Manwaring could have fit nicely into Act II as well.

Collecting "multiple-exposures" is one of our proudest mini-collection conquests. Yet again, however, this beautiful piece had slipped by us all this time. 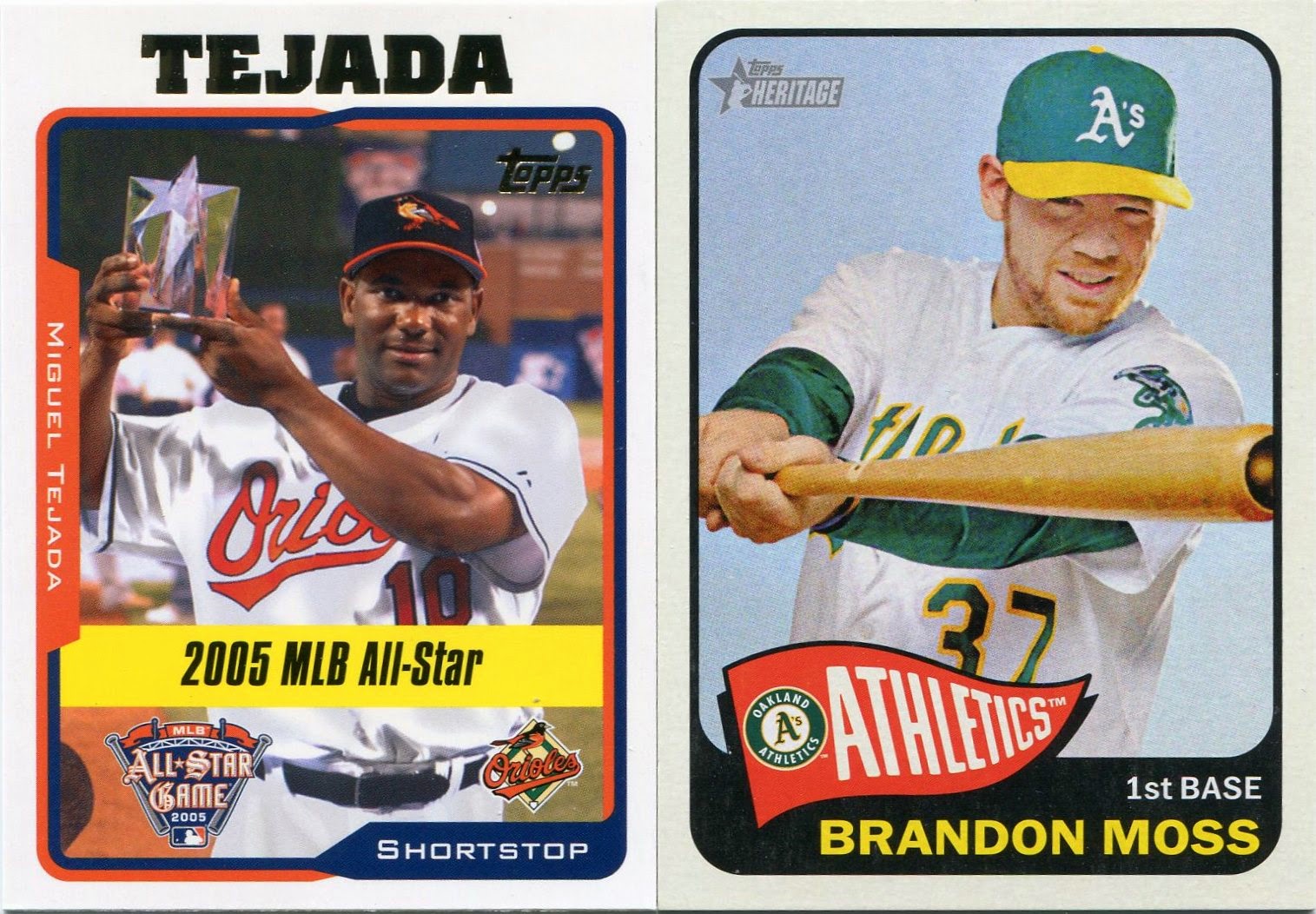 That is a mighty fine piece of hardware there.

'Tis fitting for the royal Tejada of Baltimore.

The honorable Wes unearthed a terrific "bat barrel" card that we at Dime Box Productions missed during our initial foray into 2014 Topps Heritage.

We are most honored to have our fans keeping an eye out for us. 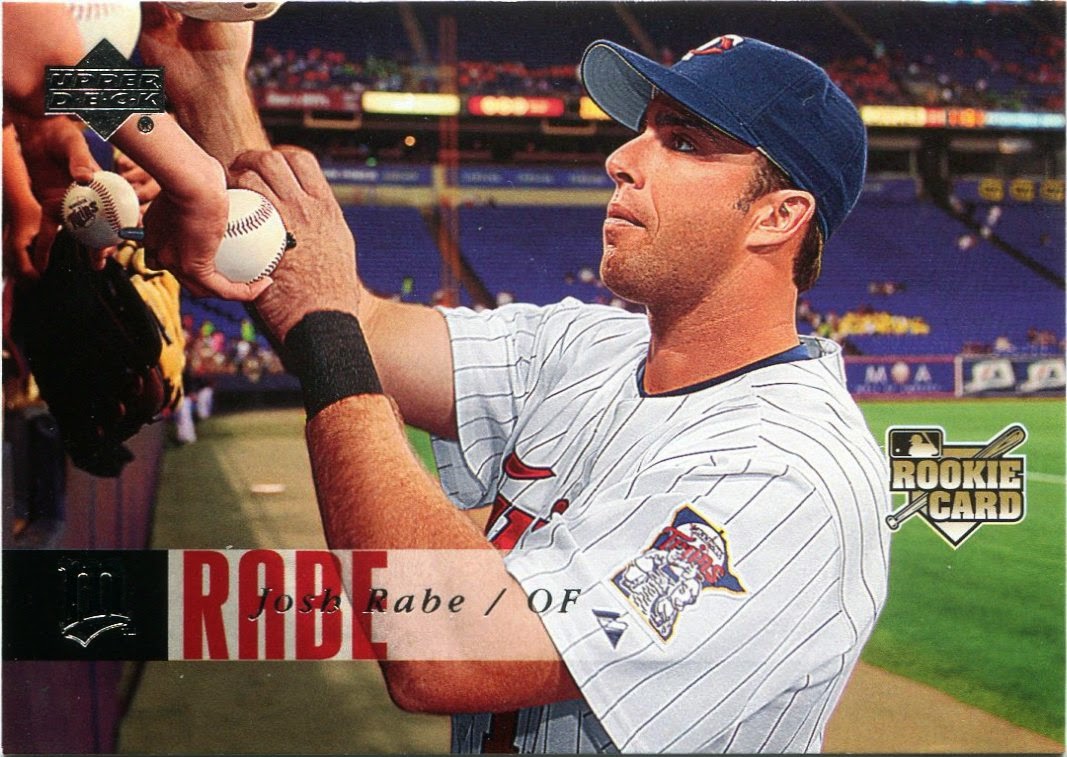 We owe a great debt to our fans.

That is why the noble Rabe of Minnesota will be signing autographs in the hallway after the close of this play. 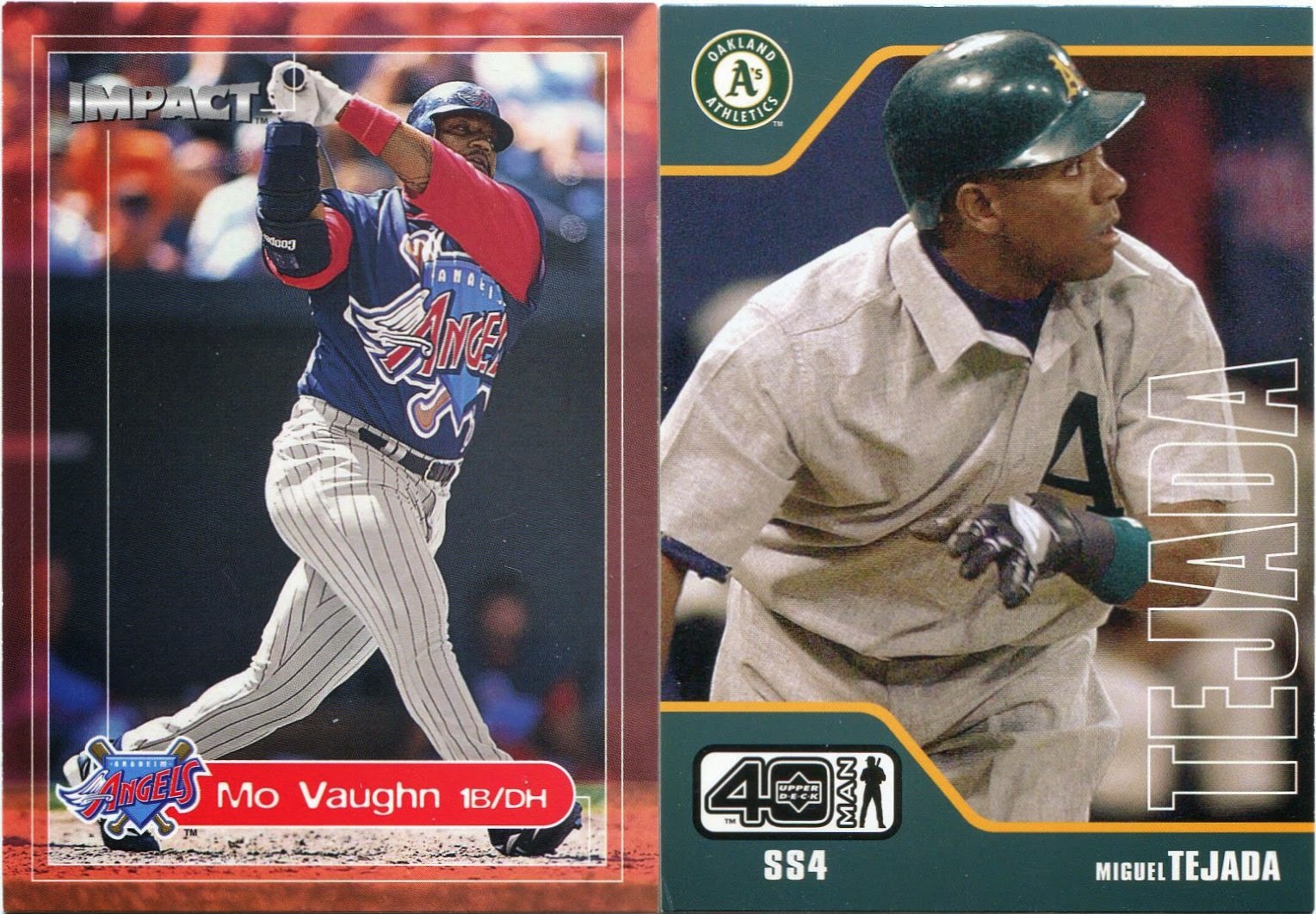 Killing two birds with one stone, I see.

Wes covered both the past and future of our National Pastime with this act.

Our sincerest apologies to those who have been blinded by that venomous Angels attire. 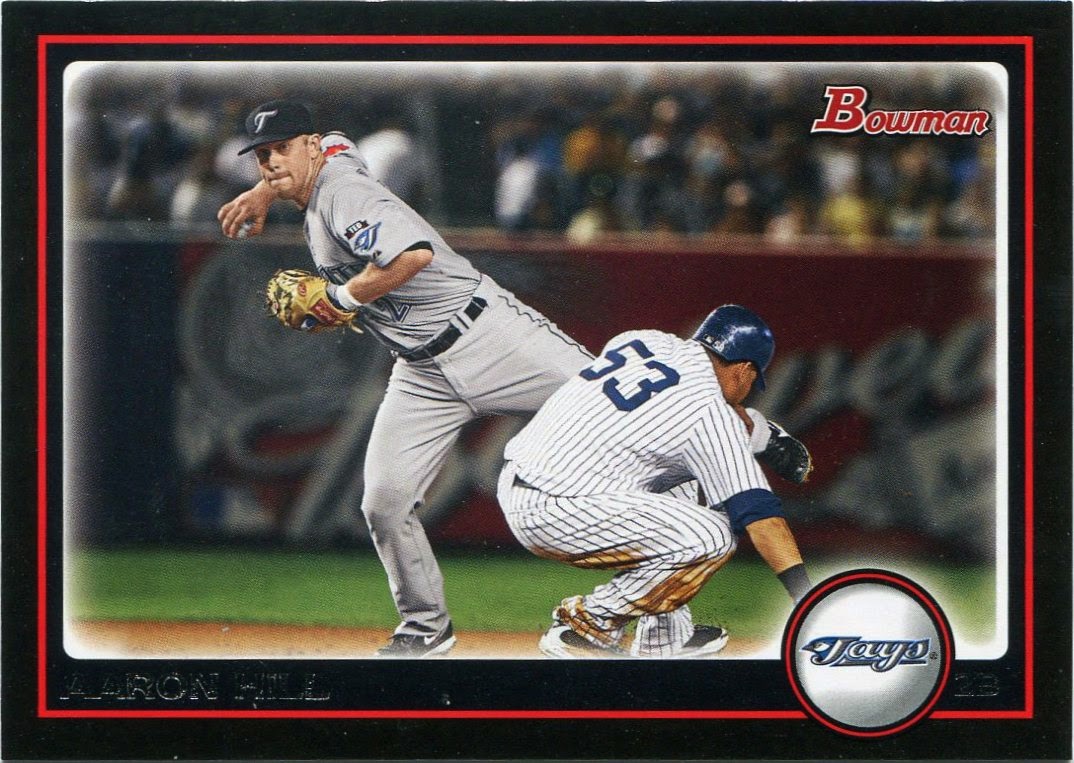 Most elegant is this double play masterpiece.

Those playwrights at Bowman aren't often noted for their work in photography. 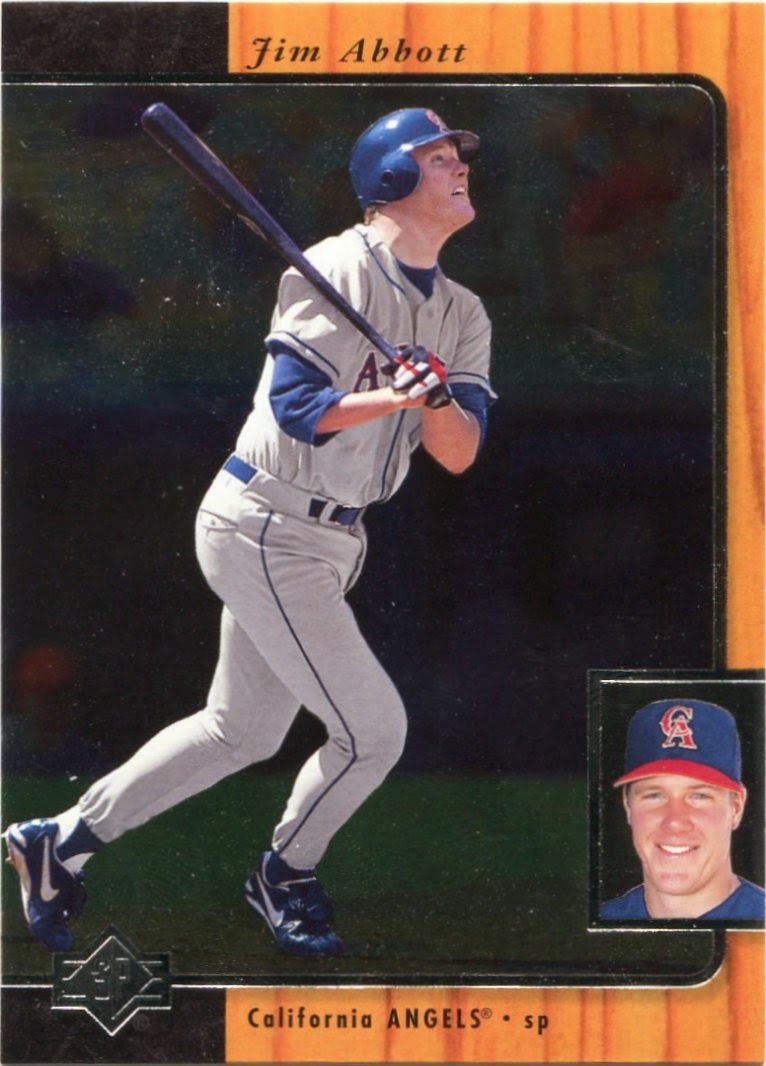 We are honored to now have this one in our archives.

Yes, it is a rare instance of an American League pitcher at the plate. But, perhaps more importantly, it is a new and highly desired card of Sir Abbott, one of the proudest members of Dime Box Productions. 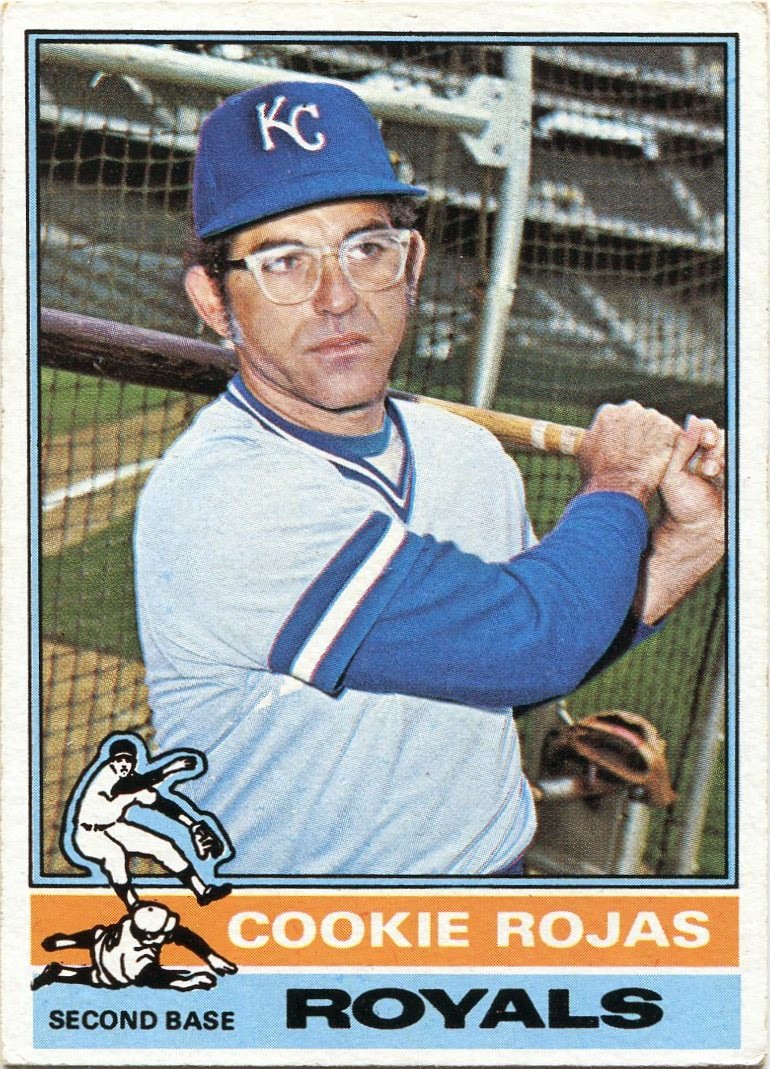 Once again, the loyal Wes went outside of the mini-collection realm for several acts.

The fact that he devoted an entire stack of cards to the sole topic of vintage is quite generous.

We were most delighted by the appearance of Cookie Rojas and his rather womanish glasses in this act. 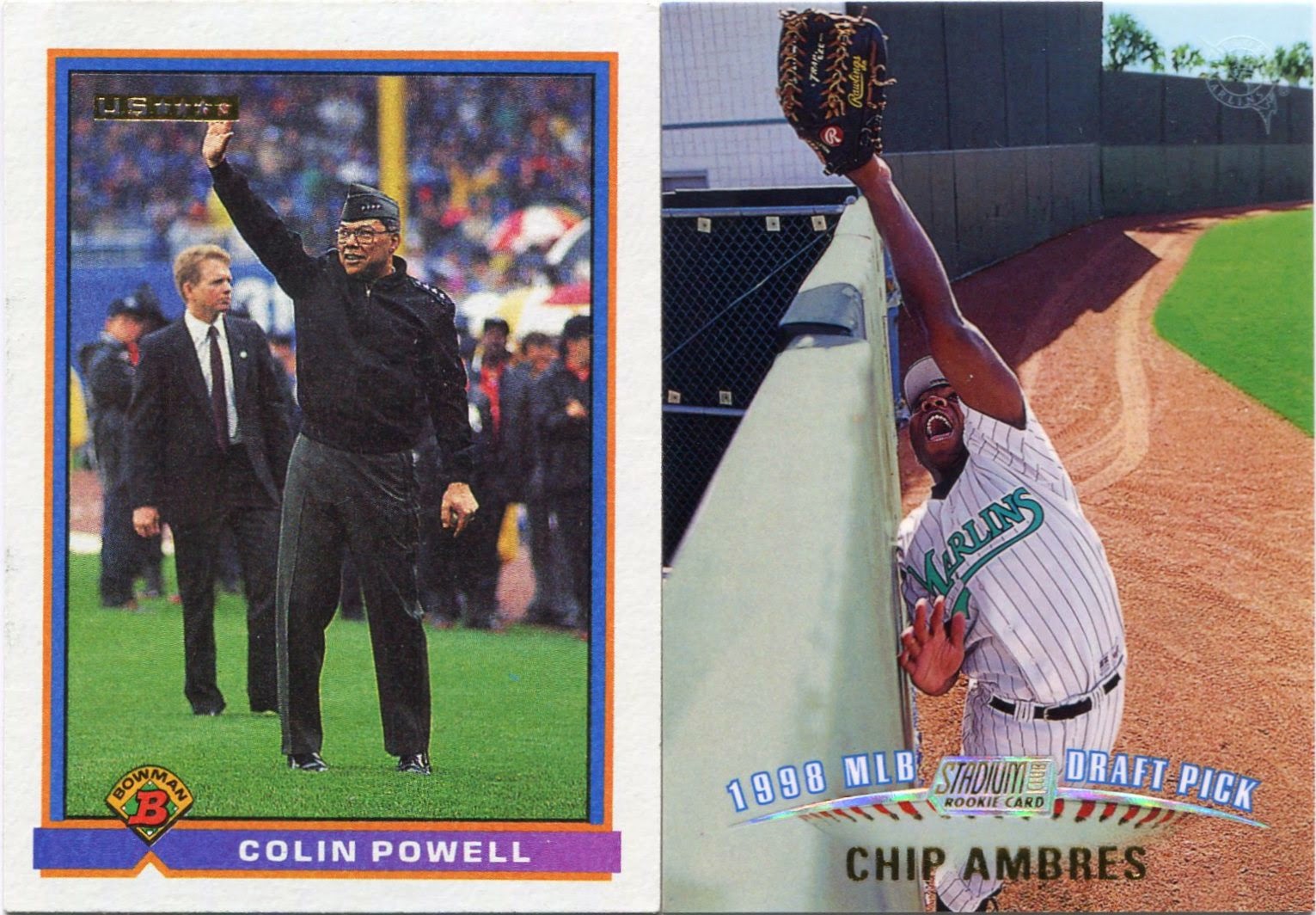 We at Dime Box Productions do not consider ourselves politically inclined.

But, for whatever reason, we enjoy receiving new donations to our political collection. Any you can spare would me most appreciated.

Though we cannot understand Colin Powell's inclusion in a standard Bowman set, we were ecstatic to see it included in this play.

Act XI: Plays at the Wall

Is that not a terrific card of sir Ambres of Florida? 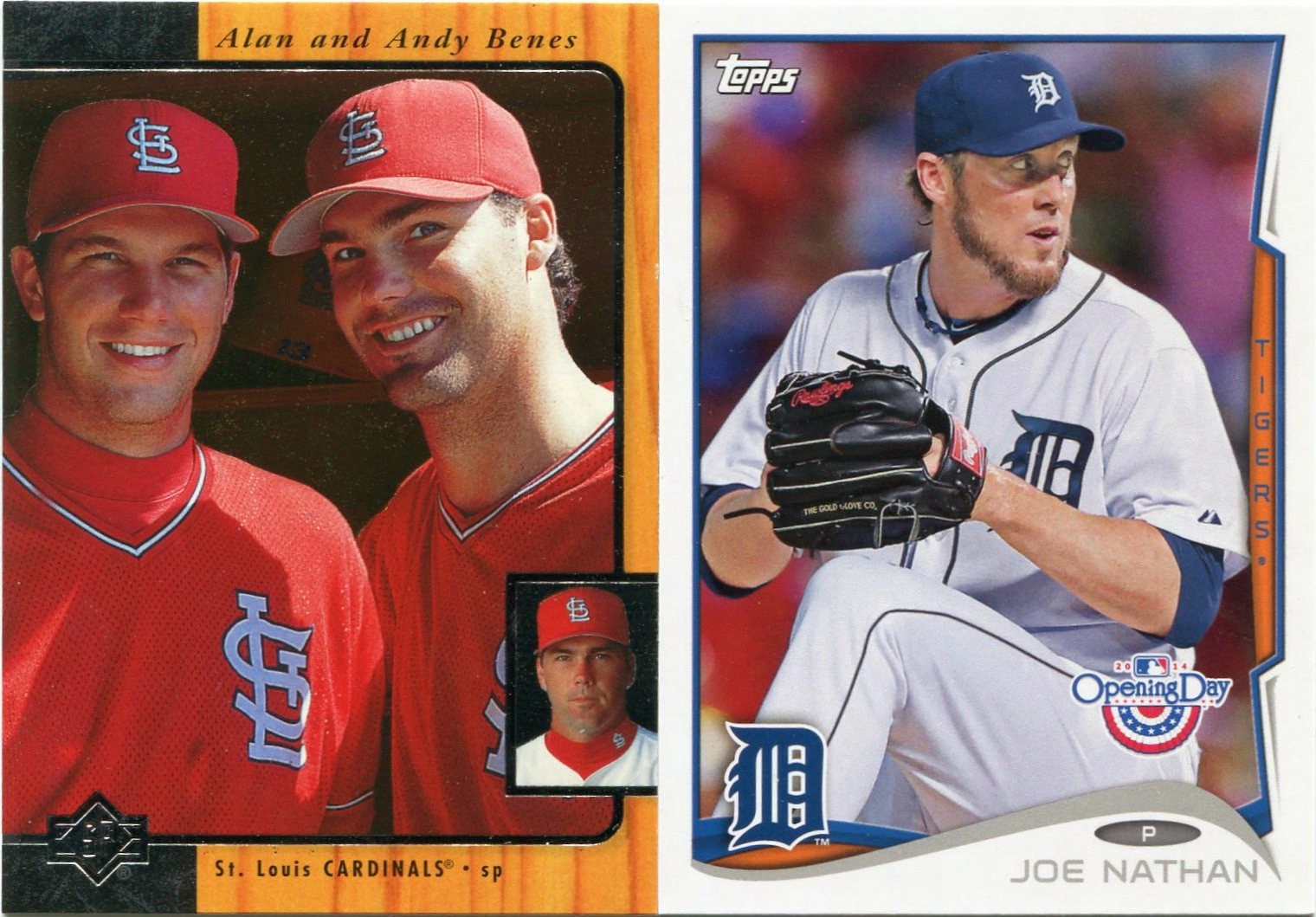 While we have yet to track down the ultimate family-themed card ever made, new ones are always welcome.

Methinks it may make for a jolly good mini-collection topic in the future.

I see someone has been dabbling in the most current of sets.

Sir Wes graciously included a few of our 2014 Opening Day needs in this box. 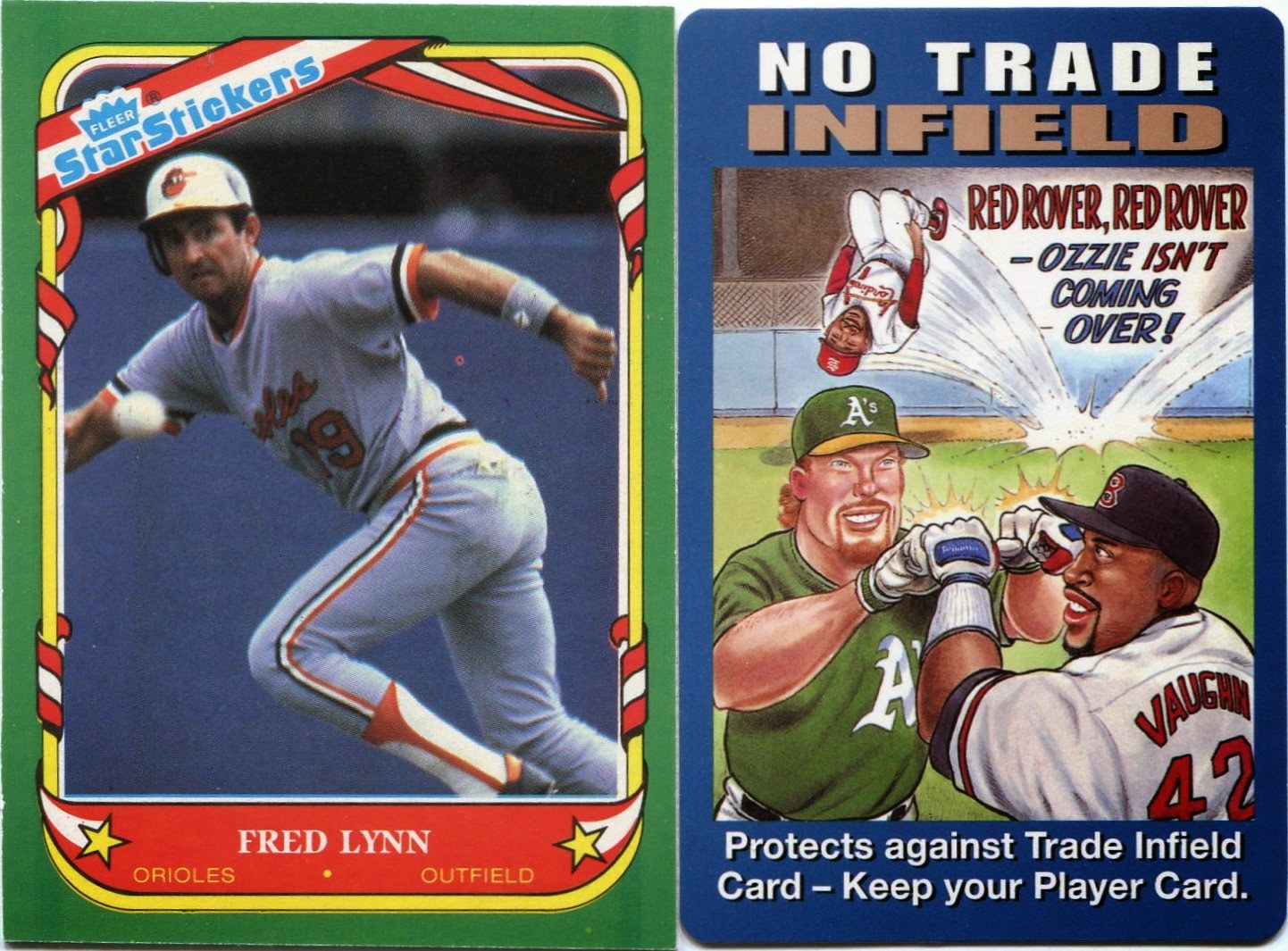 They always fill our hearts with glee.

These made for one of the more striking acts of this play.

We at Dime Box Productions are not big on these newfangled video games. We have always preferred games involving standard playing cards.

Much of this act was made up of singles from the Team Out! card game from 1996.

We may have to actually learn how to play it in the future. 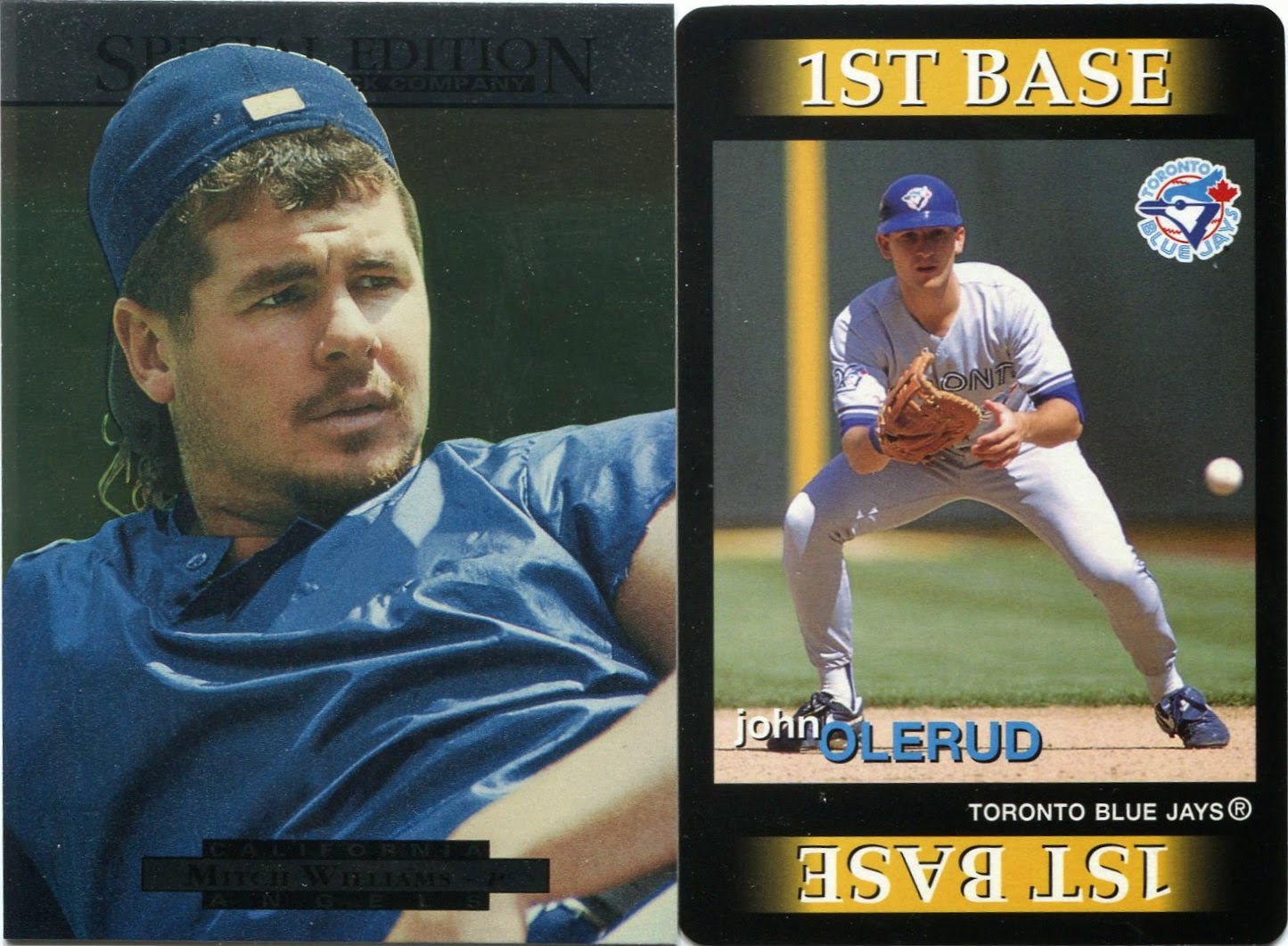 Wes once again added to our roster of players at Dime Box Productions.

Included was one of the few cards in existence that lists Mitch Williams as an Angel. Also present was another Team Out! gaming card of Lord Olerud of Toronto. 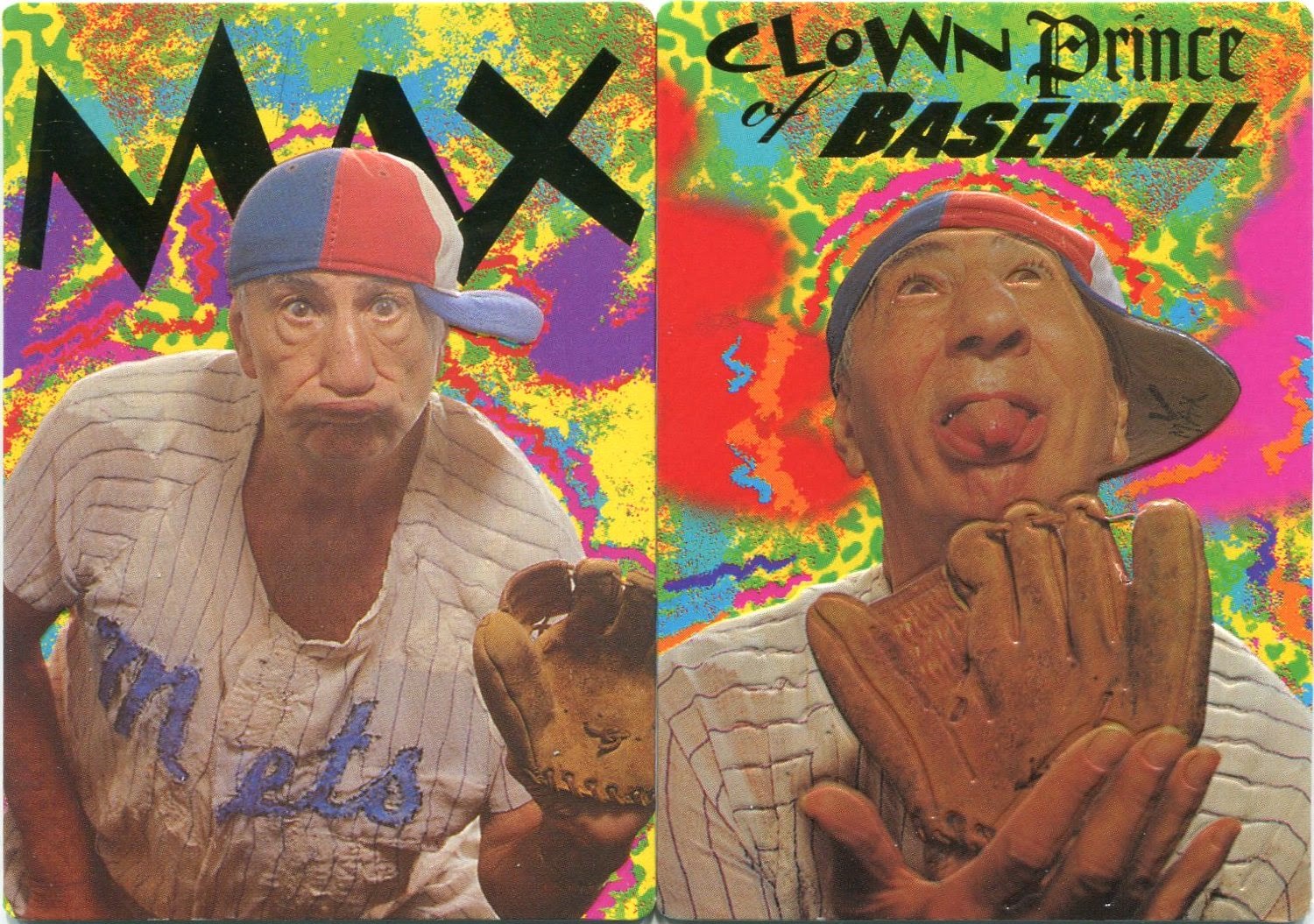 Act XVII: Everything Else, Part One

A lot of what sir Wes included could not be grouped into feasible categories.

That's just as well. Such colorful cards like these cannot be expected to fall in line with may other pieces. They are in a class of their own.

I guess now is the time to introduce Max Patkin, the jester of this play. He has been around the local minor league theaters for years waiting to get his shot in the grand halls of Dime Box Productions.

We are most honored to give you a spot in this play, Mr. Patkin. 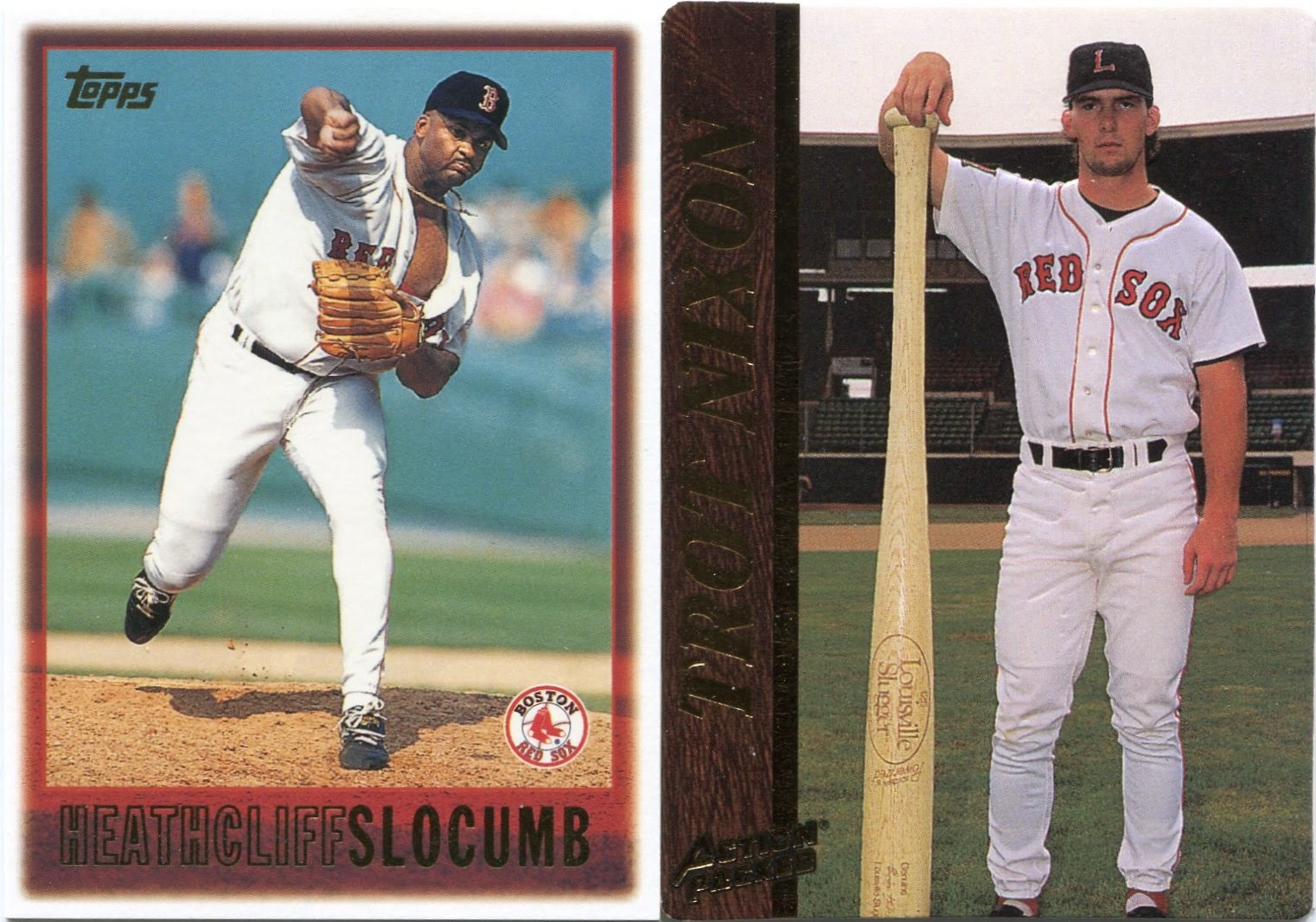 Act XVIII: Everything Else, Part Two

The final act comprises of yet another stack of cards that stand out from their contemporaries.

Apparently, Heathcliff Slocumb is not afraid to show off his chiseled physique on the grand stage.

And the honorable Nixon of Boston is present for a little comic relief in this play. 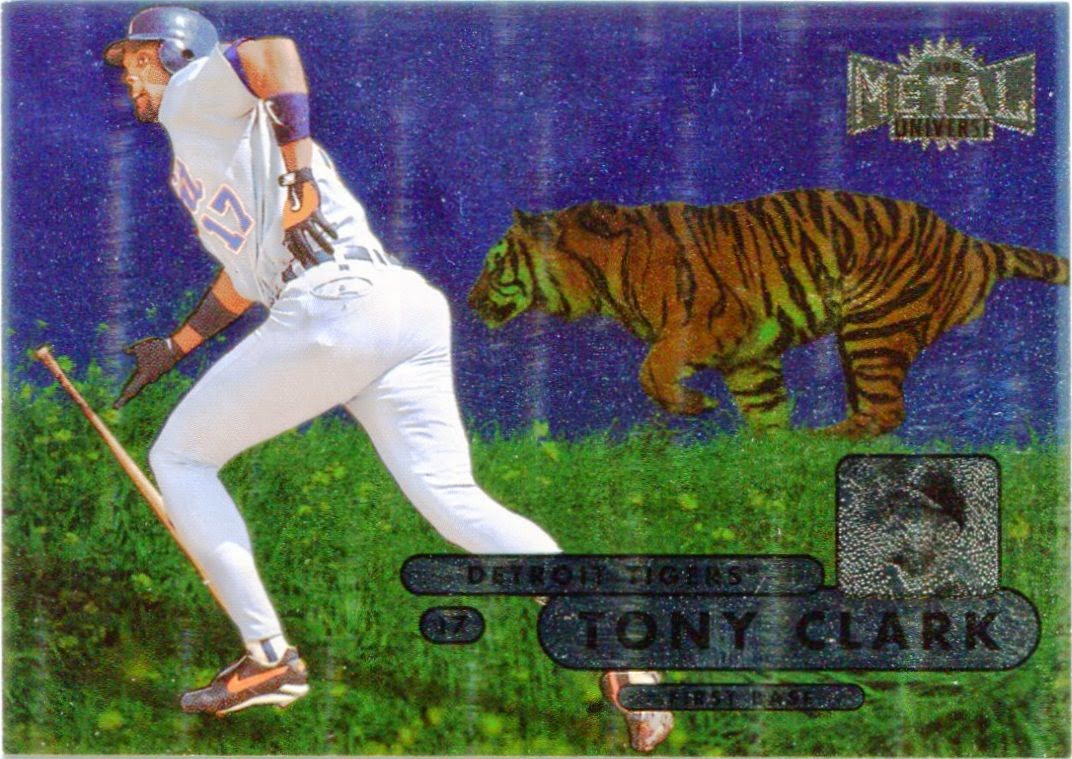 We end this edition of "Baseball Card Theater" with a simply elegant piece of cardboard.

In the past, we have struggled with revealing the true beauty of these Metal Universe cards. Yet, here tonight, we have finally found a way to feature them in all their glory.

Tigers are not normally seen in the world of baseball cards, but they certainly make for grand pieces in those rare instances.

On that note, the encore of "Baseball Card Theater" comes to a close.

I'd like to invite Wes, the man responsible for these two terrific plays, to come on out and take a bow.

We here at Dime Box Productions are in great debt to your gratitude.
Posted by Nick at 5:28 PM

That might be the brightest scan I've ever seen of one of those Metal Universe cards. Usually, you can barely see the background.

Everything about that Manwaring card is awesome. From the photo(s) to Manwaring's name itself.

I remember pulling the Colin Powell card. I know it's only a base card, but back then... it was definitely the hit of my box.