Inserts of the year 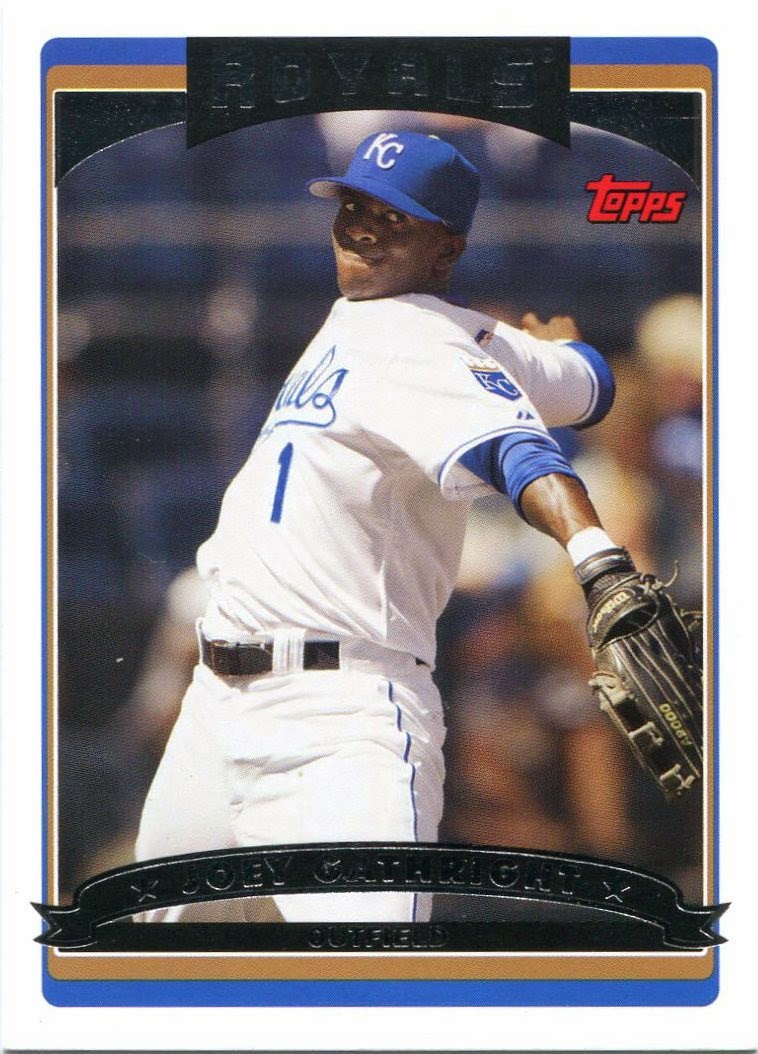 It's taken a long time for me to become the kind of collector I am today.

When I was little, I dabbled in baseball, football, basketball, and hockey cards. How I had the money to do such a thing is beyond me.

After a while, I switched to mainly baseball, although I still bought football packs every now and then. When I hit 7th grade, I went into an unprecedented year-long phase of nothing but hockey cards. I still can't explain why.

Once high school came along, baseball cards became my one and only focus. That hasn't changed. My collecting philosophies have changed and molded since then, but I've been accumulating nothing but baseball since about 2006.

Some of my first memories from those eight or so years ago involve plucking pack after pack of Topps Flagship off the shelves of my local Target. I was (and still am) a big Joey Gathright fan, and I specifically remember being excited over pulling this 2006 Topps Update single of his.

Flagship helped re-acclimate to the baseball card industry. No matter where I've been in my collecting ways since '06, I've always been a devout fan of Topps's oldest brand.

The base cards are the main focus for me, but the inserts add an interesting new layer to Flagship. It's interesting to go back through the years since I started collecting baseball cards and see which insert series worked and which didn't.

Recently, I tried to pinpoint my favorite insert sets from every year since 2006.

Here are my nominees. 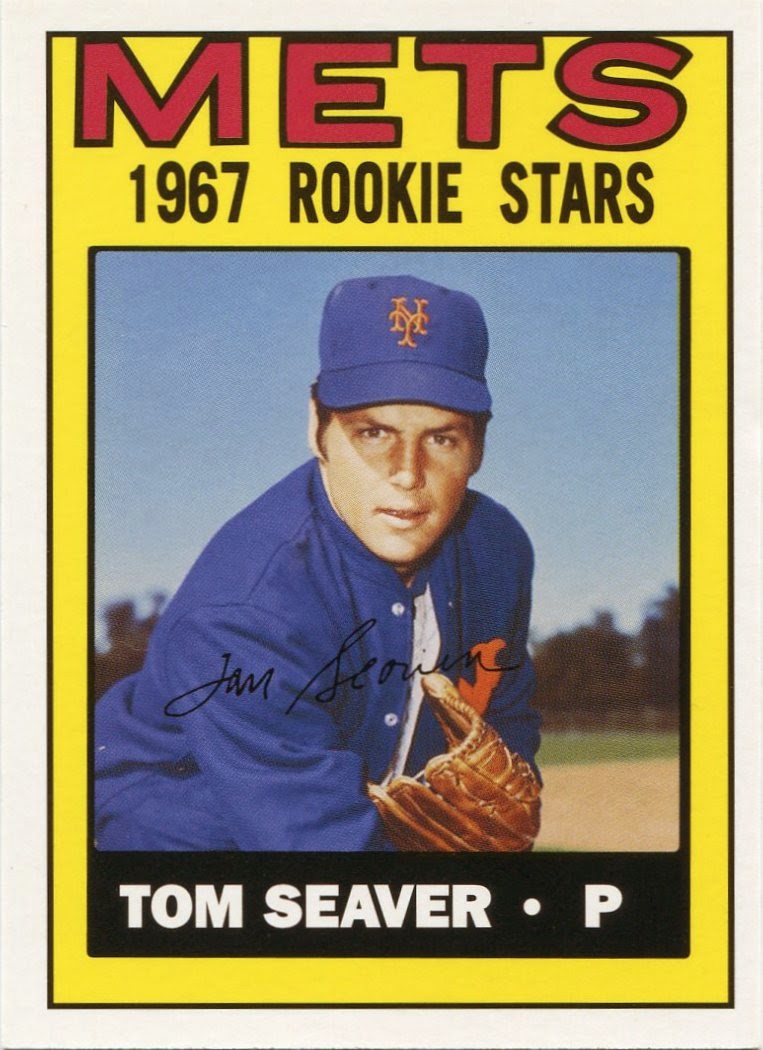 My first year back in the hobby was an unusually drab one for inserts.

This was around the time when boring and unbelievably repetitive insert sets like "Mantle Home Run History" and "Generation Now" were all the rage. I wasn't impressed then, and I'm still indifferent now.

I had to cheat a bit for 2006 by nominating an insert set that wasn't even available in packs. You could only get these "Rookie of the Week" singles by buying a pack of Topps at your LCS at the time. I didn't even know these existed back in 2006, but I've picked up quite a few in dime boxes since then.

Each of these feature a player on the Topps design from their rookie year, though with a different photo than the original. A new one was available every week throughout the season in card shops.

I didn't discover these until I got to college, but I know my high school self would've gone crazy for them. The inserts in 2007 were almost as boring as the previous year.

Topps was still trying to capitalize on their Mickey Mantle monopoly by issuing strange sets such as "Unlock the Mick" and "Mickey Mantle Story". Most of the non-Mantle inserts were just as uninspired.

The lone saving grace was the "Distinguished Service" series.

I showed a couple of these in my Memorial Day post earlier this week. I still think they're among the most well-designed inserts of the last decade or so.

They pay tribute to past war heroes of both the baseball and non-baseball variety. Sluggers like Duke Snider were granted spots in the "Distinguished Service" set right alongside names such as Winston Churchill.

I still consider completing the 30-card series to be one of my proudest accomplishments as a collector. 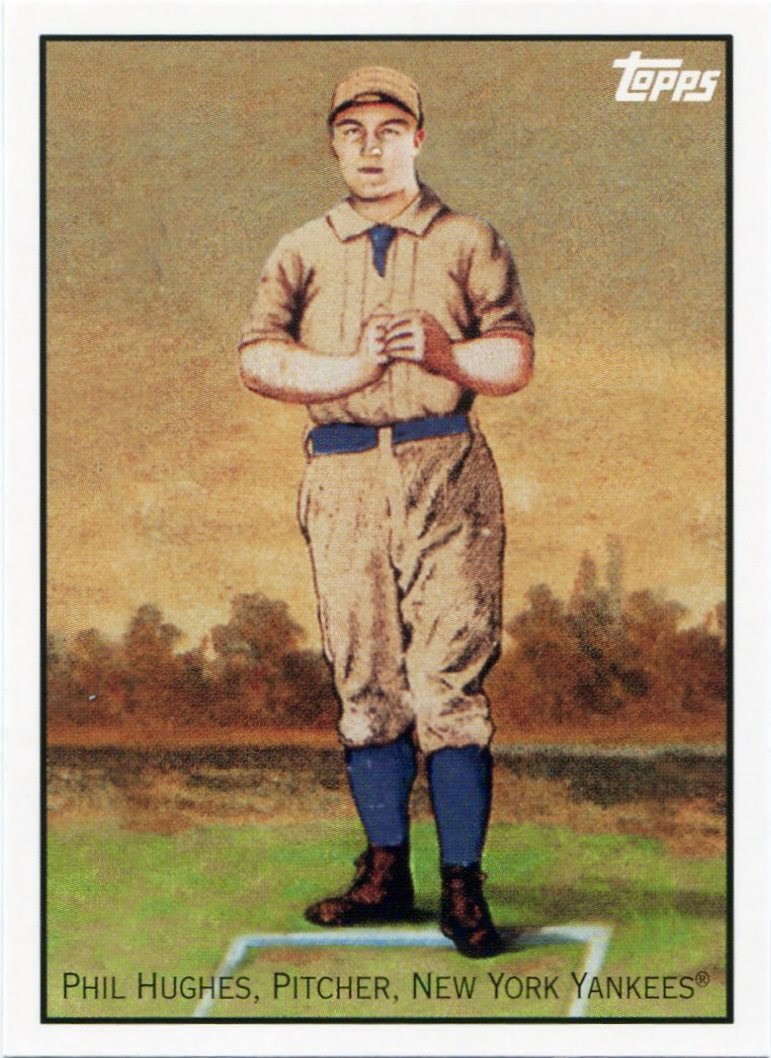 Topps began to step up its insert game in 2008.

I was a big fan of both the "50th Anniversary Rookie Cup" and "Year in Review" checklists.

For me, though, the best inserts of the year came from the "Trading Card History" series. The set featured current stars on both old Topps and select pre-Topps designs.

What I like most about the set is that it stretches into some of the more obscure brands in history. This beautiful card of (then) hot prospect Phil Hughes stretches all the way back to the 1887 N284 Buchner Gold release.

It's obvious that Topps did their research for these "Trading Card History" inserts. 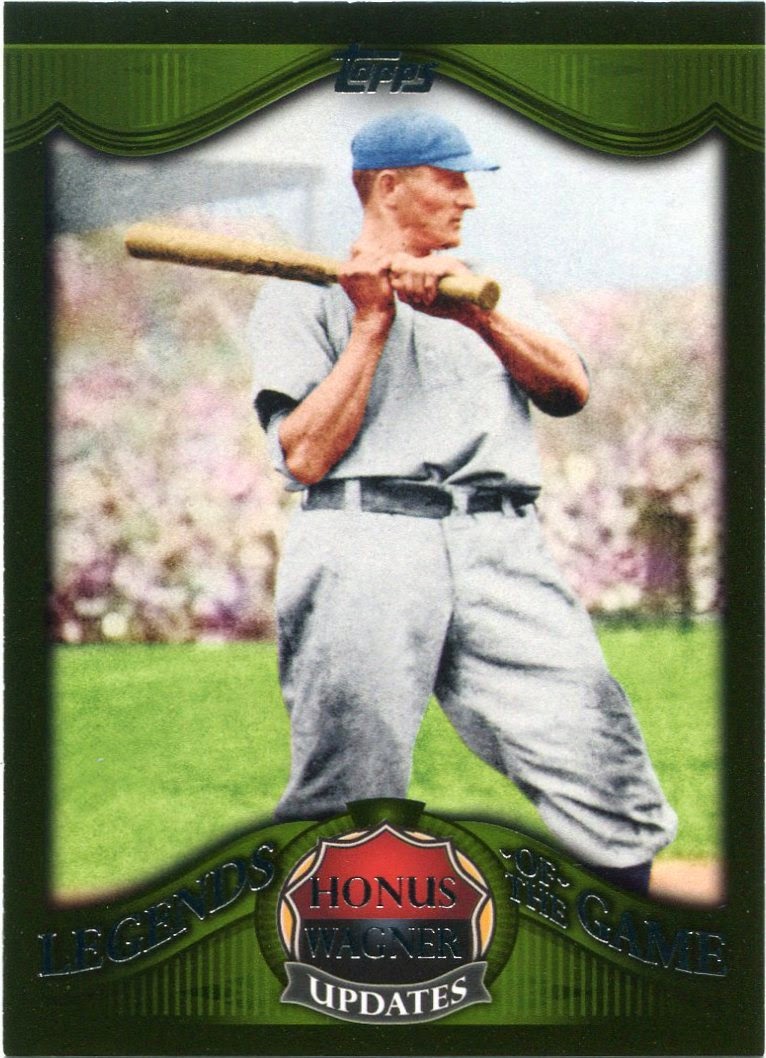 I'm a sucker for pretty much anything related to the Hall of Fame.

That's why I was such a big fan of the "Legends of the Game" series. No other 2009 inserts came close to these.

The design has a very heroic feel to it, which is fitting for a Cooperstown-based set like this one. Topps even notched a few extra points with their additional "Legends of the Game Updates" series, appropriately found in packs of Topps Update that year.

Among the set's highlights is this Honus Wagner card, the only one I've ever seen of his early days with the Louisville Colonels, who were in the National League around the turn of the century.

The fact that Topps put in the effort to colorize such old photographs was an added bonus. 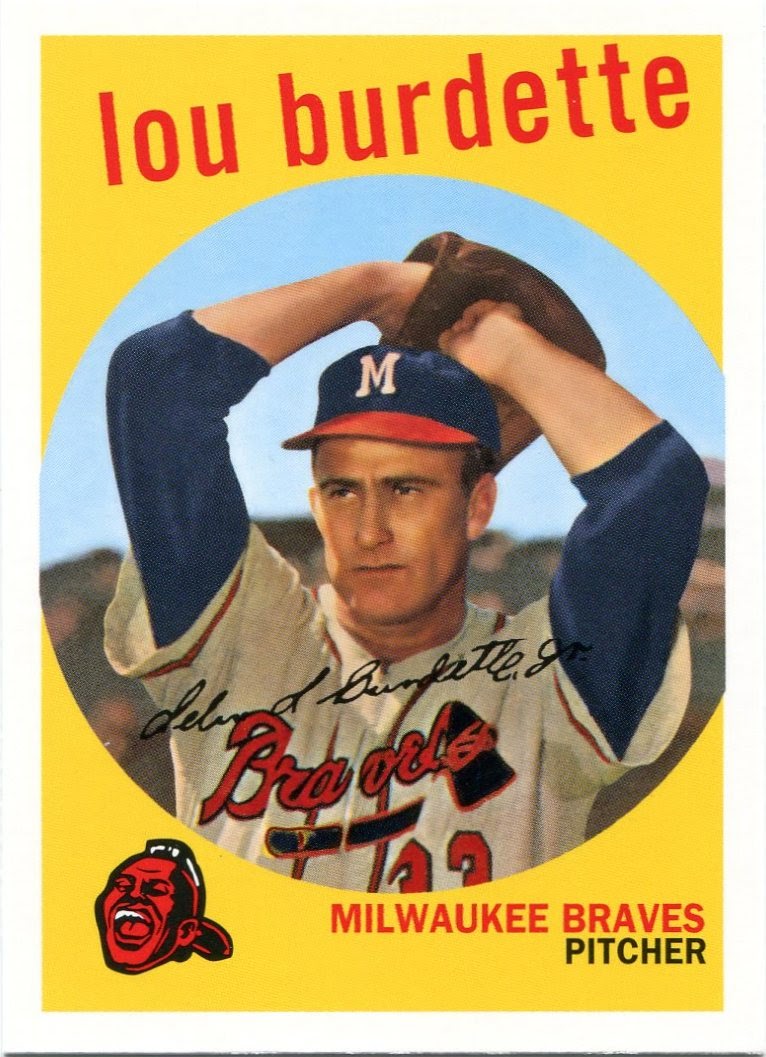 The fact that it was the first year of the dreaded monopoly may have overshadowed what a good job Topps actually did that year.

The nod, however, has to go to the "Cards Your Mom Threw Out" series. Topps created a big splash in the industry with this one, coupling it with the successful "Million Card Giveaway" promotion that year as well.

Topps hit on another one of my weaknesses with these inserts. Reprints. "The Cards Your Mom Threw Out" checklist features a reprint of a card from every year, beginning with Flagship's inception in 1952 and stretching all the way until 2009.

You could tell that the executive minds down at Topps even had a little fun with it. Hence, the inclusion of the infamous Lew Burdette triple-error card.

Between having Burdette (a righty) posed as a lefty, the incorrect spelling of his first name, and the fact that there isn't a ball in his glove, Topps majorly screwed up with this one back in 1959.

I think they deserve a round of applause for adding it to their "Cards Your Mom Threw Out" series. 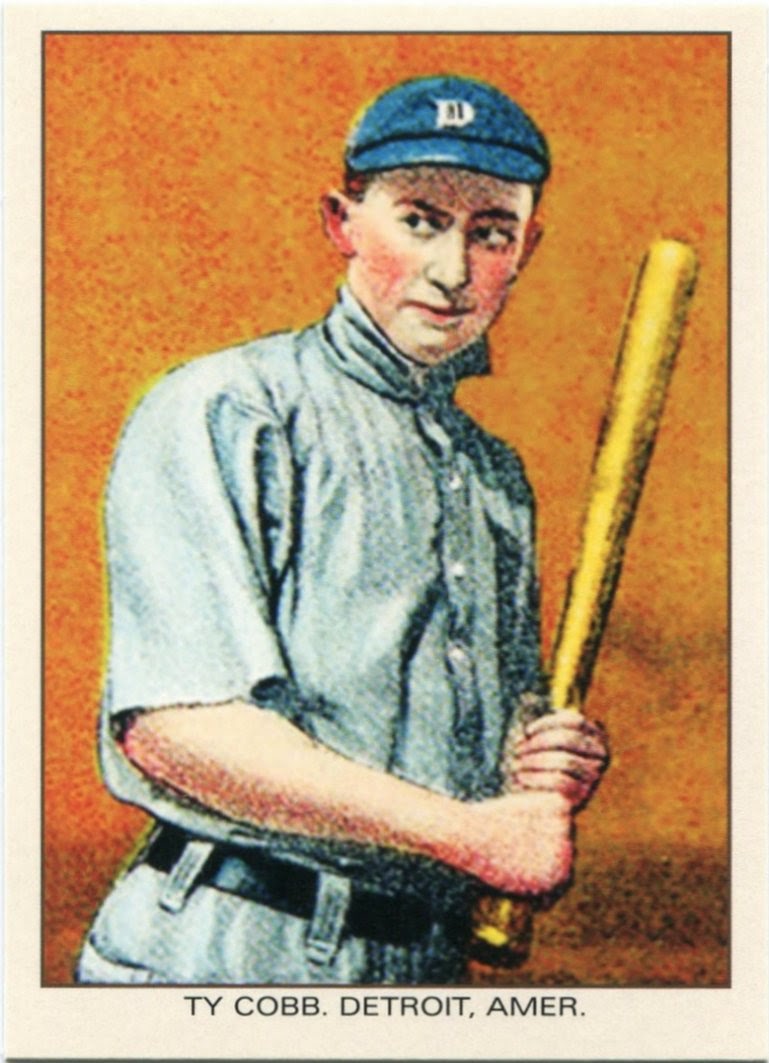 Although Topps tried to once again win my heart with their "60 Years of Topps" series, my favorite inserts of the year were these "CMG Reprints".

I find it strange that Topps chose to honor anything that they didn't produce, but that's exactly what they did in 2011. Similar to the "Trading Card History" series, these honor old and often obscure sets from the days of Ty Cobb and Babe Ruth.

Though I'll always love reprints, seeing the same ones honored over and over again can get stale. Many of these, however, were cards I'd never seen before.

Couple that with old pre-WWI cardboard and you've got a set that was destined to win me over. 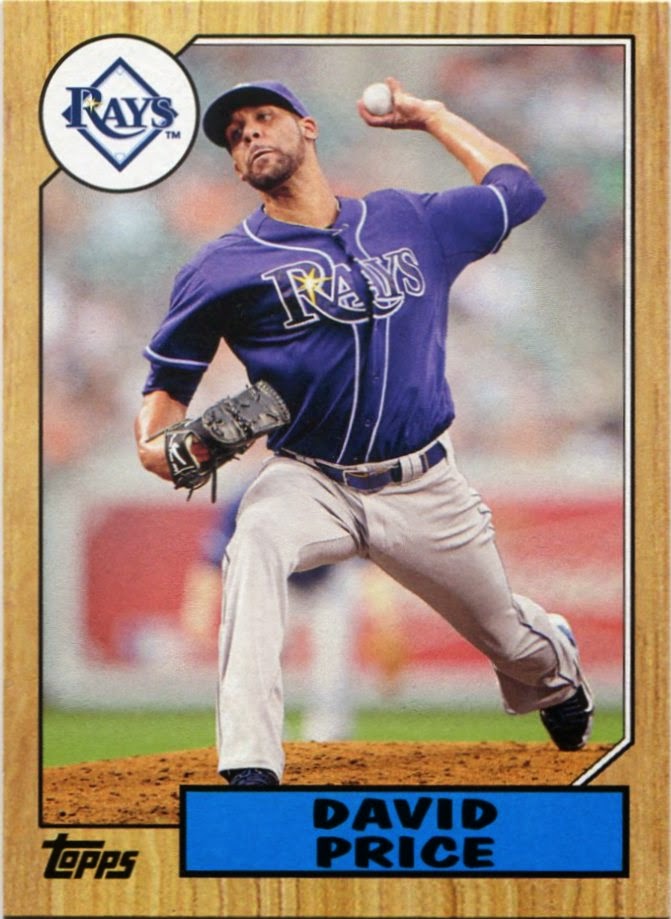 Topps officially started to get mini-crazy in 2012.

The idea of shrinking previous Topps designs and slapping current players onto them was a work of genius by Topps. I salivated for these when they hit the streets.

Part of that was because none of the other inserts in 2012 were all that exciting. Between "Golden Greats", "Gold Standard", "Golden Moments", and many more, it was the overdose of gold that no one wanted.

As we'd find out, though, a mini overdose was just beginning down at Topps headquarters. 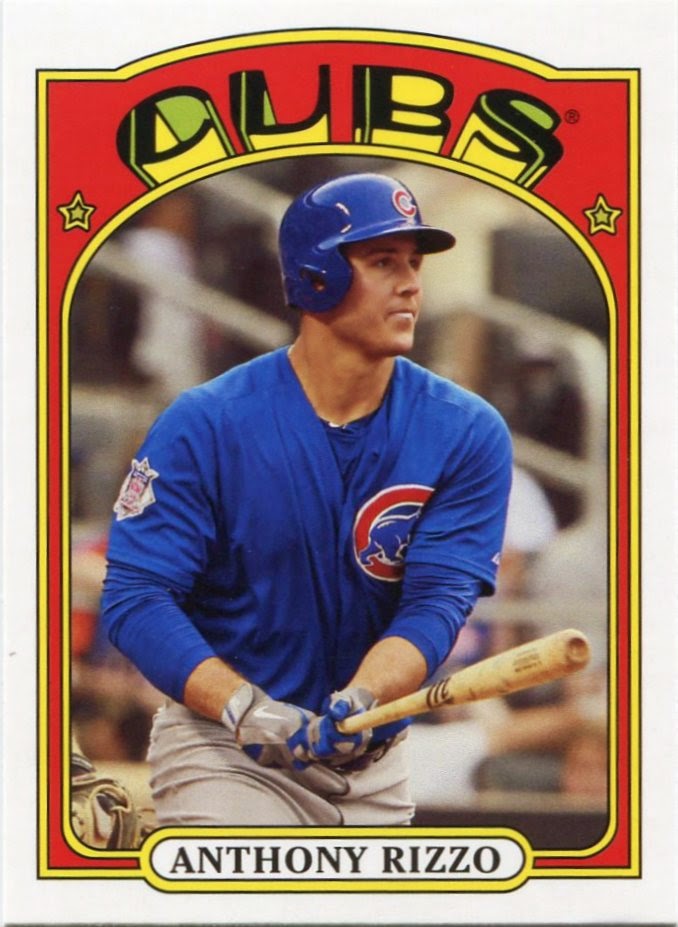 And it was still working.

A lot of other collectors were probably tired of minis when these were released last year, but not me. I loved the '87 design, and I was excited to see another of my favorite Topps sets honored in bite-sized form with these '72 minis.

Like 2012, though, there wasn't much else to focus on in the world of inserts. Topps adopted a rather boring "chase" theme last year that resulted in forgettable sets such as "Chasing the Dream" and "Chasing History".

Topps changed up the mini formula with 2013 Update, this time honoring the '71 design. Though 1971 is probably another one of my top five Topps sets in history, I like the '72 minis better. 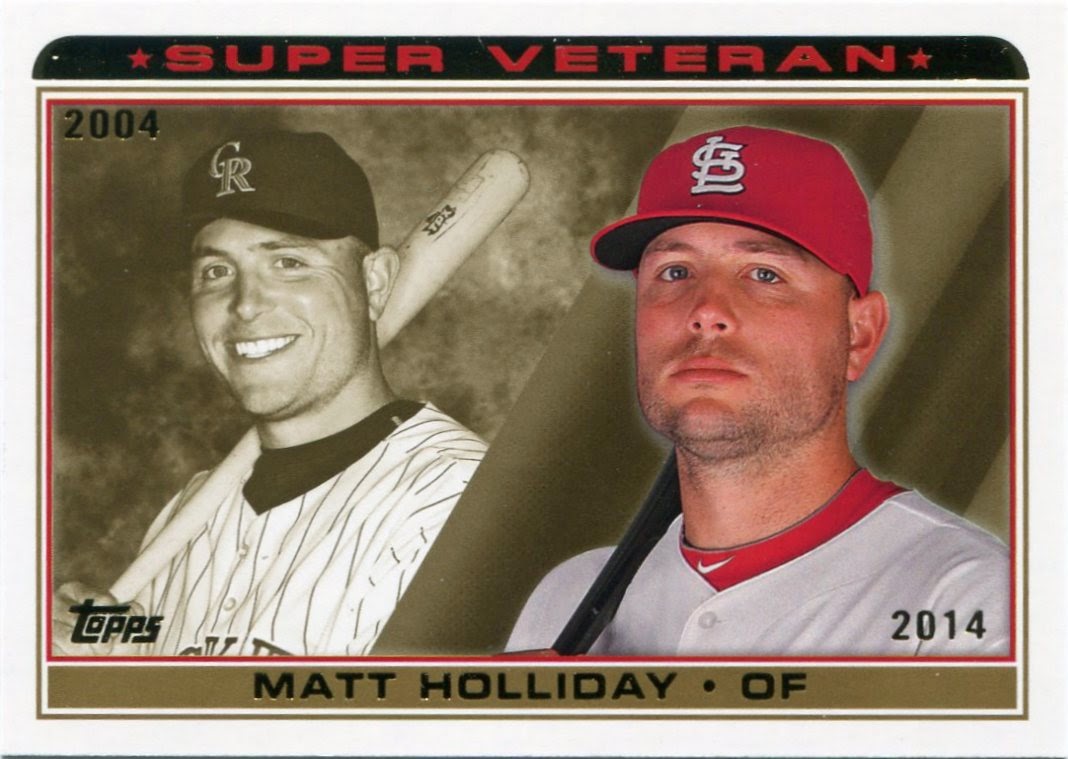 Here in 2014, though, I'm afraid to say that I might be getting a bit sick of minis.

This year's '89 minis are neat, but I think Topps is overstaying their welcome with the whole let's-shrink-old-designs formula.

Although it's still early, the inserts I've enjoyed most in 2014 are these "Super Veterans". They're are a nod to the 1983 Topps subset of the same name, coupling shots of a current star from his rookie season and the present day.

One thing that I didn't notice until I researched this post was the fact that my favorite inserts of the last five years (and six of the last seven) are either a rehashing of old designs or straight-up reprints.

I'm not sure whether that's due to a general love for reprints or simply apathy towards any of the other insert sets Topps creates these days. Probably a little of both.

I'm not sure what that says about the current state of Topps inserts.

I'll let you decide on that for yourself.
Posted by Nick at 6:44 PM

I have to admit to liking the 2010 Turkey Red cards a bit more than the Cards Mom Threw Out. I guess I had a problem of being too literal with the premise -- no one's mom was throwing out cards in 1989, after all.

Of all those on your page, though, I really like the Distinguished Service ones. I came across a bunch of them for 25 cents each at a flea market, and now I'm wishing I had bought them all.