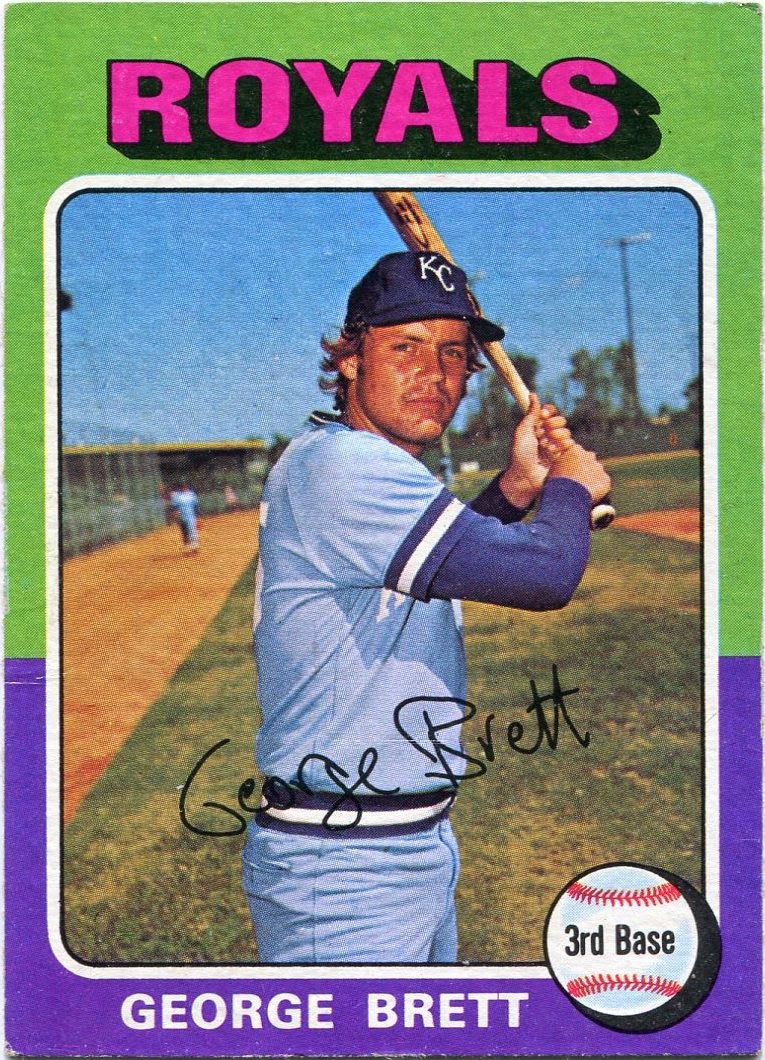 I'm sure you've seen this card before.

I mean, it's only one of the most iconic rookies in history. I'm sure proud to own a copy. I'd be lying if I said that having it doesn't make my collection feel a little more complete.

While George Brett had tons of great cardboard released during his career, there's still something innately special about his one and only rookie card. I think most of us can agree there.

Though I'm not sure it was ever their intention to make the newest "hot prospect" a big ticket item in the hobby, Topps made the rookie what it is today.

Whether it was through beautifully-designed subsets or neat multi-player issues, Topps turned the no-name first-year into a must-have card in packs. The rookie was king.

For a long time, they laid claim to producing the only first-year cards of the game's biggest stars. That's part of what led to such iconic pieces like the Brett.

I guess I can see why Topps was so adamant about not letting Fleer and Donruss into the market before 1981.

They would've lost most of their rookie power. 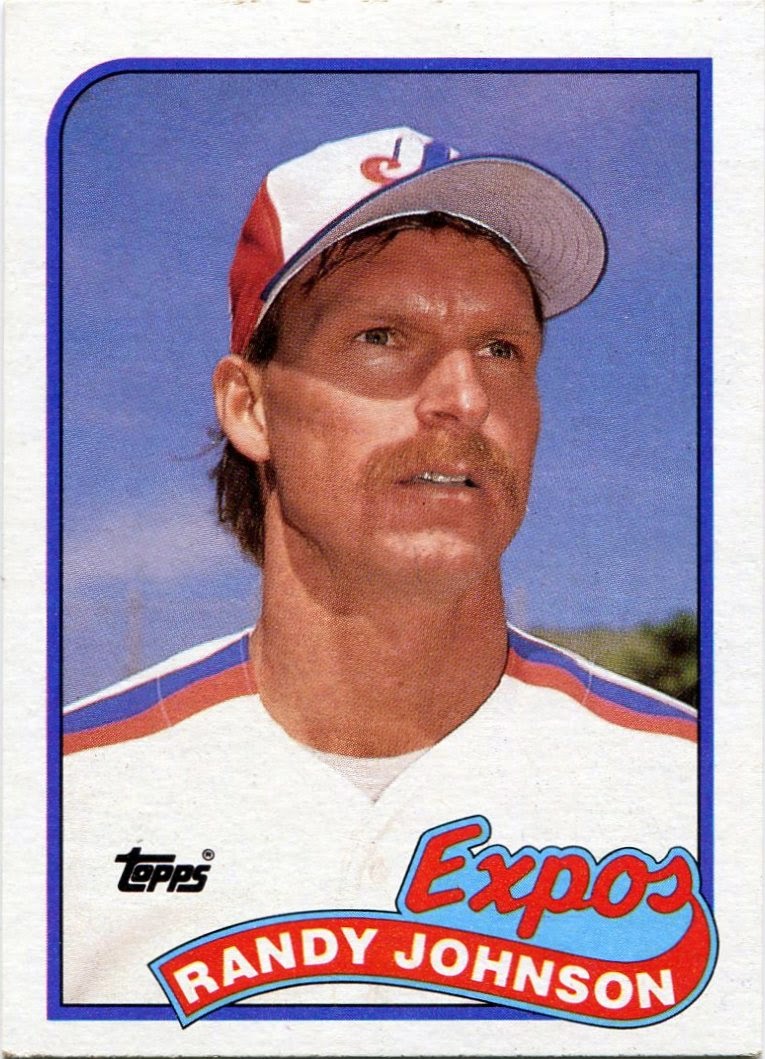 In most cases, Topps could no longer lay claim to producing a guy's only rookie card after 1981.

With Fleer and Donruss in the market, the game's biggest prospects could receive up to three different rookies. The madness was extended even further when Score and Upper Deck joined in on the fun later in the decade.

The era of the iconic rookie card looked to be over.

But a funny thing happened.

Even though card companies massively overproduced their cardboard in the late '80s and early '90s, I'd still consider quite a few rookies from the era to be iconic.

Of course, there's the obvious '89 Upper Deck Griffey rookie. And, although he was included in each of the five major releases in 1989, I'd place the "iconic" label on Randy Johnson's Topps first-year card.

That's one good thing about the overproduction era.

Even awesome rookies of stars like the "Big Unit" don't cost a whole lot. 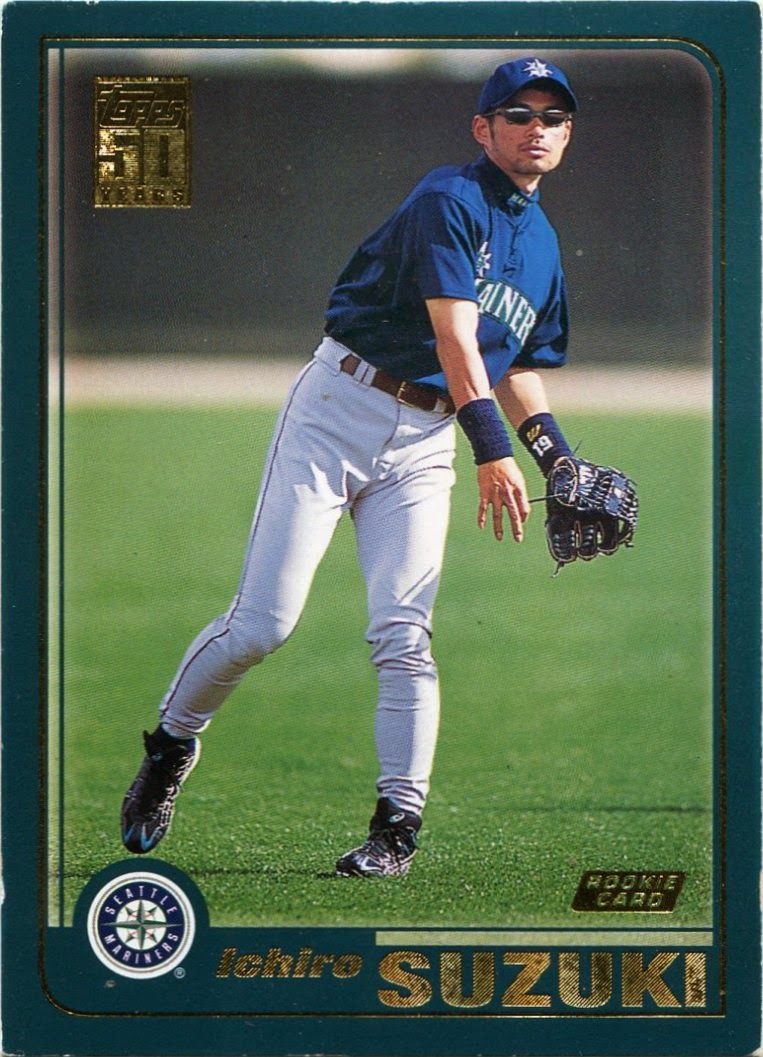 The years following the overproduction era laid the groundwork for the rookie problem I think we face today.

As you probably know, zillions of other companies and sets joined the fold in the mid-to-late '90s. Guys who made their debut during that time period had more rookies issued than you could count.

This is why I'm afraid we'll never see another iconic rookie card.

Only a select few from the last twenty years or so could even be considered as such. Maybe Albert Pujols's 2001 Bowman rookie. And maybe Joe Mauer's 2002 Topps rookie.

When you picture the rookie cards of guys like George Brett or Robin Yount, those famous '75s instantly come to mind.

But try and picture an Ichiro rookie. He's one of my favorite players in history, but even his rookies aren't burned into my memory the way first-years of Rickey Henderson or Trevor Hoffman are. 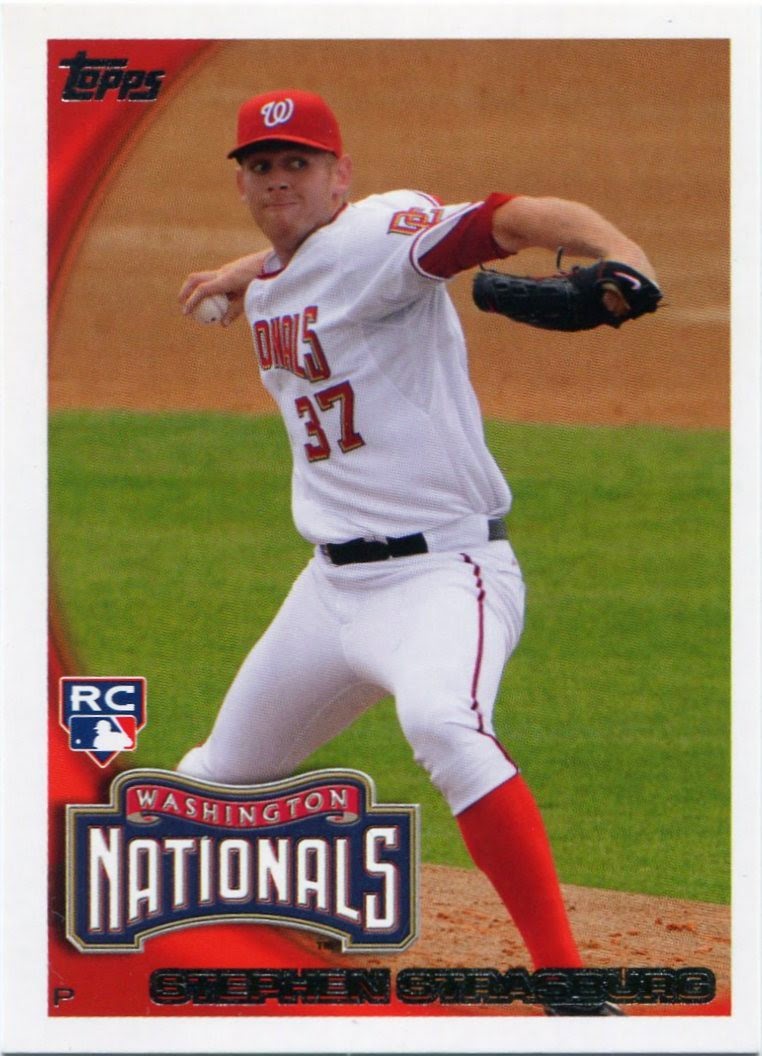 As much as they helped build up the rookie card, I think Topps is to blame for watering it down as well.

If there was one hope for the Topps monopoly, it was the fact that we might get to see a rebirth of the iconic rookie. With only one company in town, guys would finally get that one big first-year card.

Topps started right away with short-printing the hell out of rookies. Just take a look at the Stephen Strasburg extravaganza for proof. I think Topps printed about four or five variations of the same card that year.

I got my hands on the standard one, but absolutely no part of me wanted to chase down the other copies. 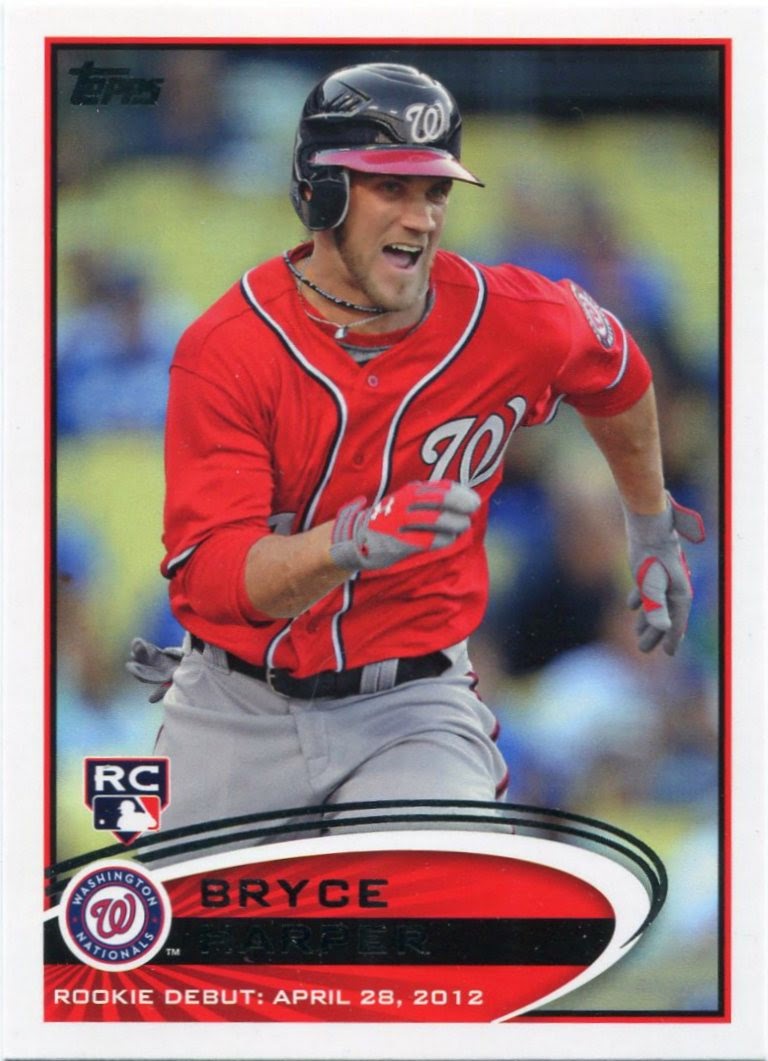 Unfortunately, that's pretty much where I'm at with rookies now.

From what I hear, Bowman just hit the shelves. I haven't bought a pack of the stuff in about six or seven years now, and I don't plan on breaking the streak in 2014.

The pull of the rookie card just isn't there.

If I can find a first-year card of the next big phenom, great. If not, so be it. Between Archives and A&G and Bowman and Bowman Platinum and Bowman Inception and whatever else, there's not a lot of pride in finding a rookie card anymore.

It doesn't help that Topps keeps sticking multiple cards of one guy into each set. I think this is Bryce Harper's "official" 2012 Topps rookie. But, seeing as how he occupied two or three different spots in that year's checklist, I'm not even sure.

You knew when you had a rookie card back in the day. 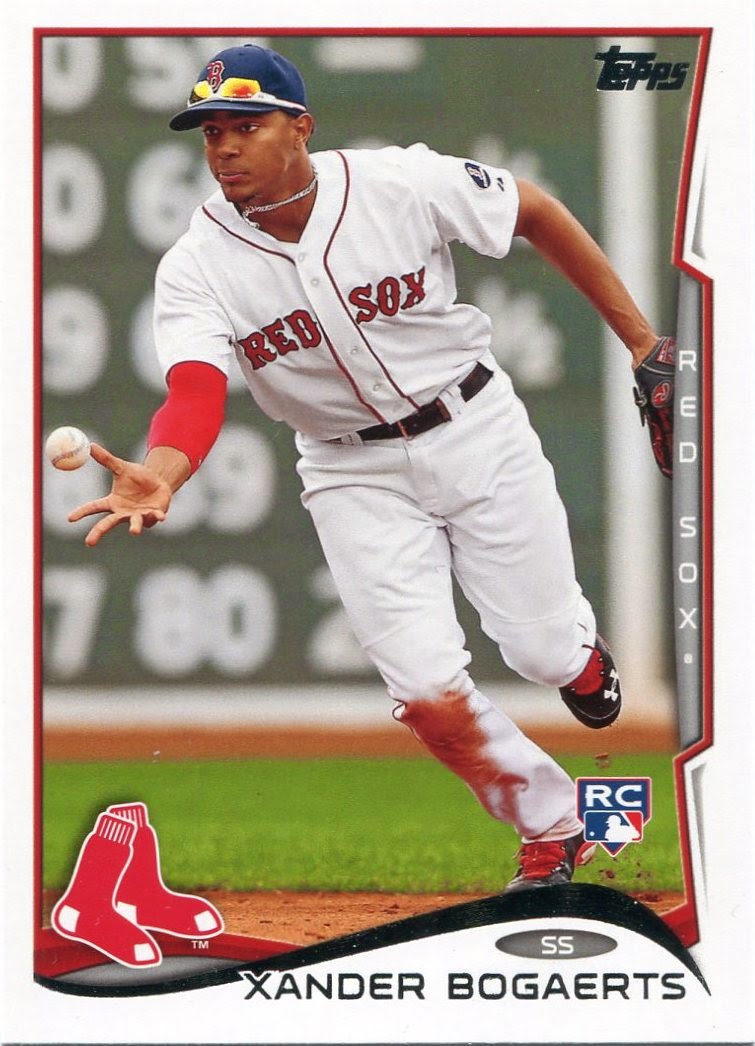 Can the hobby revert back to the days of iconic rookies?

Still, a part of me believes Topps has passed the point of no return by now. I don't know that the rookie card will ever be what it once was.

I hope Xander Bogaerts becomes the big star that everyone seems to think he will be. Even if he does, though, I doubt I'd be able to tell you what his 2014 rookie card looks like in five years. I'd probably have to go back and consult my binders.

Rookie cards just aren't as memorable as they once were.

Great post, and so tragically true. But I'd argue there are a few more cards still holding iconic status. 1997 David Ortiz, for example. 2000 Miguel Cabrera. As you said, though, the best test it to try to close your eyes and picture the card. This can be tough to do.

I'd love to start collecting modern day rookie cards. Unfortunately it's way too hard to figure out with current releases... so I'll just stick to the 90's and earlier.

You're not the only one that hopes Bogaerts becomes the star that everyone thinks he will be.

Admittedly, my favorite RC's belong to Tony Gwynn and Ken Griffey Jr. For me they are the iconic pieces of cardboard that truly define my entry into the hobby. That shared, I haven't made much of a point to build up contemporary or current player RC's. I'm not quite sure this is the case...

While I can generally agree that the potentially iconographic nature of some of the previous, now nearly vintage cardboard gods, RC's won't be dethroned any time too soon, as I think about it now there are a number of current rookies I may need to chase down.