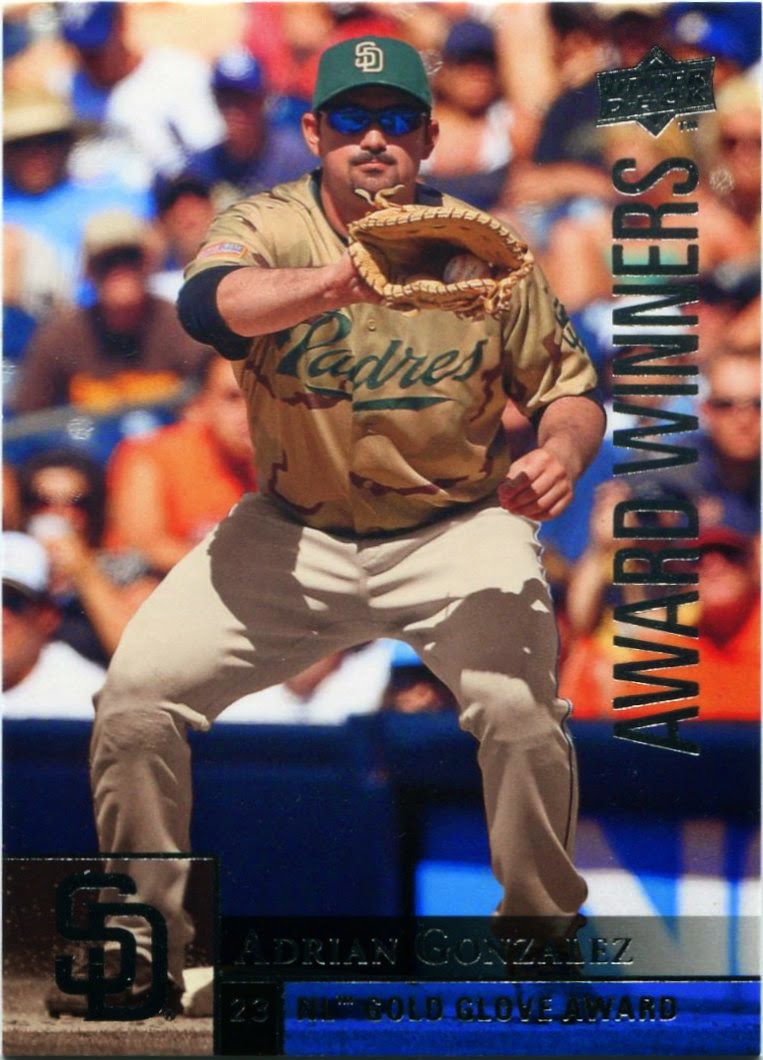 I hope all my blogging buddies are having a great Memorial Day holiday.

With baseball, food, and time with the family, I always look forward to this time of the year. It's also important to remember why we celebrate Memorial Day in the first place.

I have had family members who have served and cannot thank the great men and women of our military enough. I'm glad to see that baseball is doing its part to honor the holiday with camouflage hats and jerseys.

As many baseball fans know, a lot of the game's biggest stars have served for our country. A lot lost prime years of their career due to their time in the military.

Having grown up in the era I did, it's tough to imagine a time where ballplayers missed prime chunks of their career to serve in the military. It's hard to believe baseball nearly shut down during World War II due to player shortages.

The fact that a lot of future stars and Hall of Famers walked away from the game they loved during wartime says everything you need to know about their American allegiance.

So, in honor of Memorial Day, I've done a little bit of research and put together my ballot for the Veteran All-Star team.

Much thanks to this site for all the wonderful information, by the way. 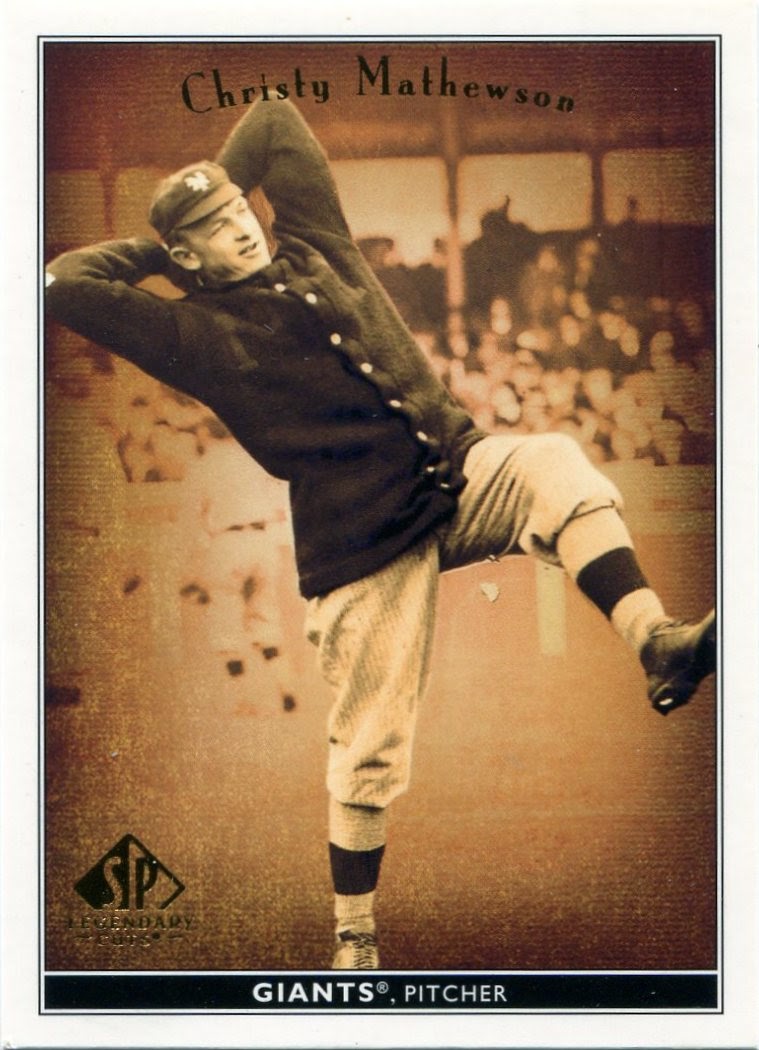 Christy Mathewson was already retired by the time he enlisted near the end of World War I.

He remains one of the greatest pitchers in baseball history. And, although you won't find his name on such lists, he tragically passed away as a direct result of the war.

While serving overseas with Ty Cobb, Mathewson accidentally inhaled a large amount of mustard gas during a botched chemical training exercise in 1918. Cobb escaped with only minor sickness, but "Matty" wasn't as lucky.

He died in 1925 from tuberculosis, a result of the sickness he contracted from chemicals during his time in the war.

Mathewson remains one of the greatest pitchers in baseball history, no doubt. 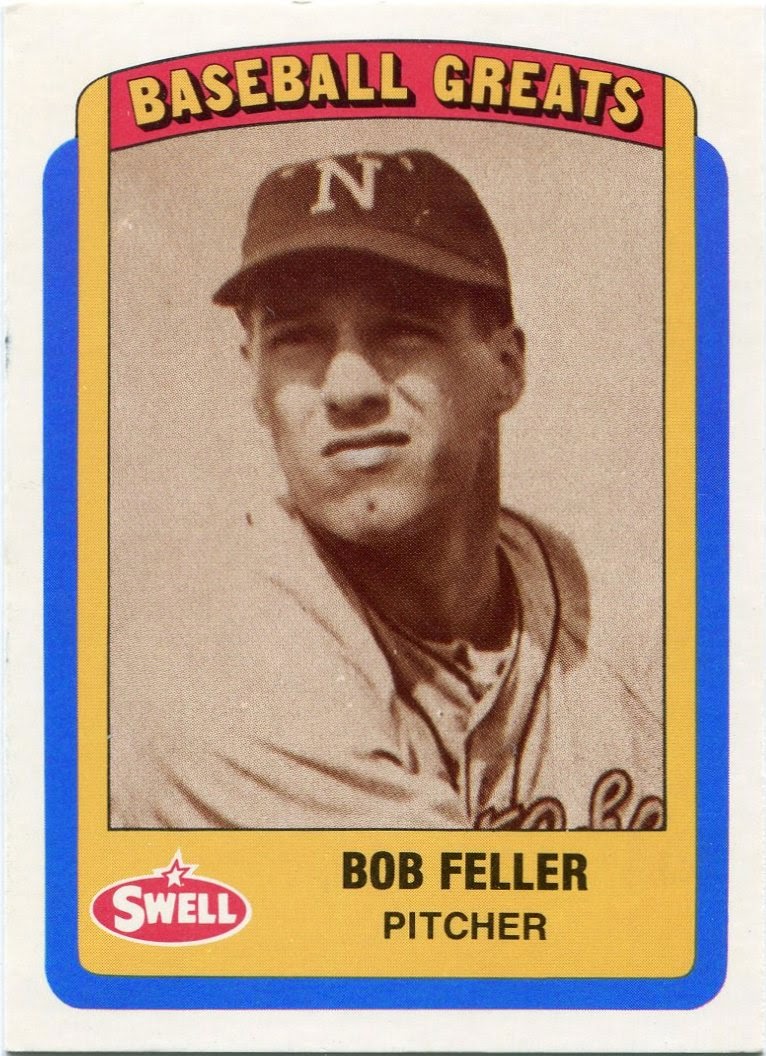 Bob Feller was the first ballplayer to enlist in the military after the Pearl Harbor bombings.

While in the Navy, he saw some combat later during the war in the Pacific. Feller missed four prime years of what turned out to be a dazzling career due to his service in the military, not returning to the game until late in the 1945 season.

I've always been fond of this particular card of "Rapid Robert" because I believe it features him with the Norfolk Navy team he pitched for during the war.

It's one of my favorite oddball pieces. 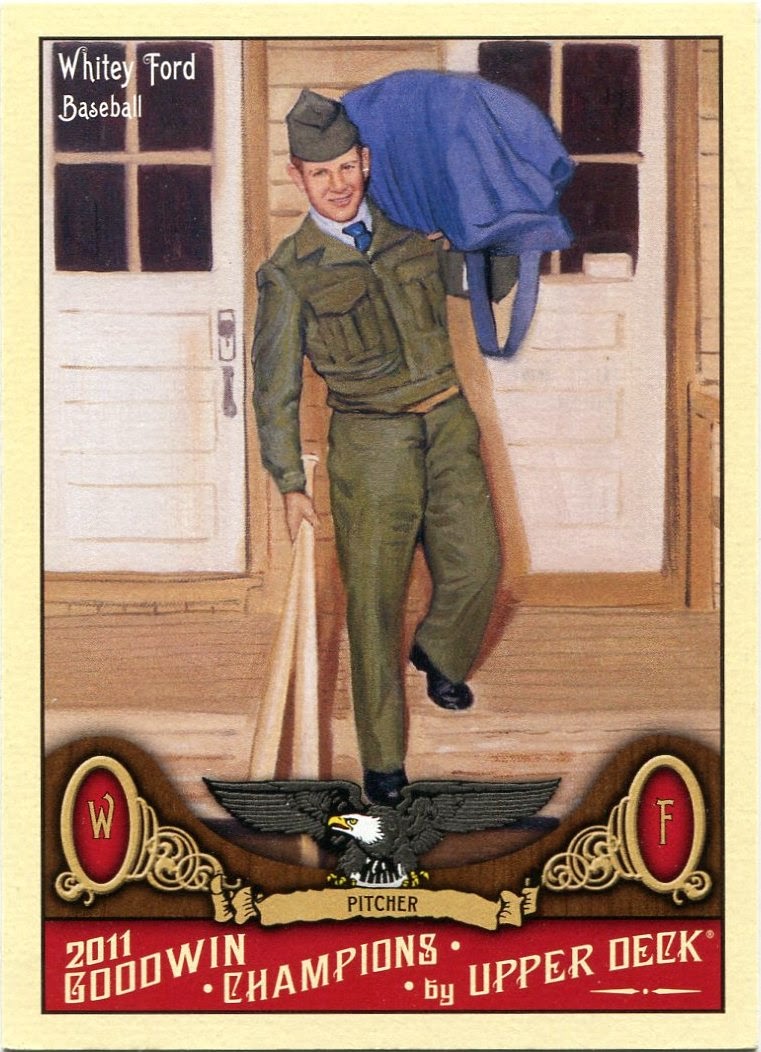 He then missed the next two years of his Hall of Fame-bound career after enlisting in the Army during the Korean War. Ford returned to the Yankees in 1953, not missing a step. He notched the first of 13 consecutive double-digit win seasons, going 18-6 that year.

It was the beginning of a long and prestigious career for Ford in the Bronx. 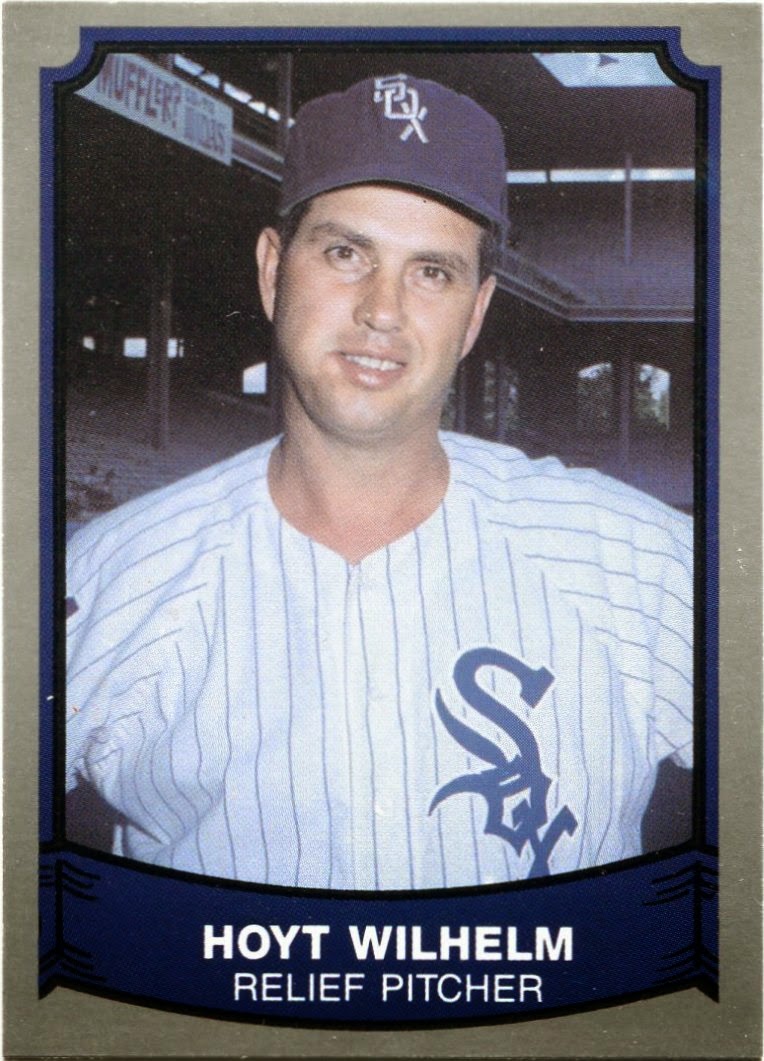 As if I haven't given you enough reason to like Hoyt Wilhelm in this blog's history, I should note that the man put in his military time as well.

Wilhelm was actually signed by a minor league club out of high school in 1942, but missed the first three years of his professional career after enlisting in the Army. He saw combat in the war and was wounded during the Battle of the Bulge.

He returned to the game in 1946 and spent six seasons in the minors before debuting as a 29 year-old rookie with the Giants in 1952. Wilhelm made up for lost time, however, spending 21 seasons in the bigs and retiring just weeks before his 50th birthday in 1972.

Even with guys like Mathewson, Feller, and Ford, on the roster, any great team needs a bullpen anchor. 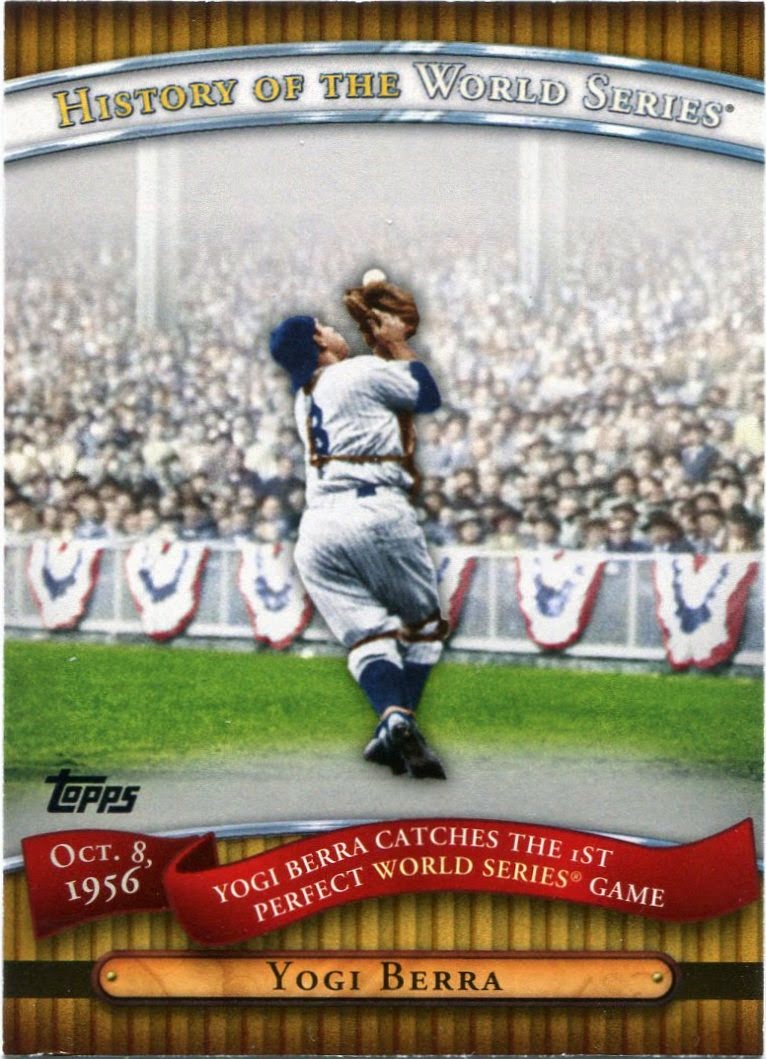 Yogi Berra spent time in the Navy before ever playing professional baseball.

Having served on a craft that participated in the D-Day invasion, he was sent home after suffering a hand wound later in the war. It was then that he started playing in the minors, eventually earning a brief call-up with the Yankees in 1946.

It was the start of a long career that would end with Berra becoming one of the National Pastime's most well-known figures. 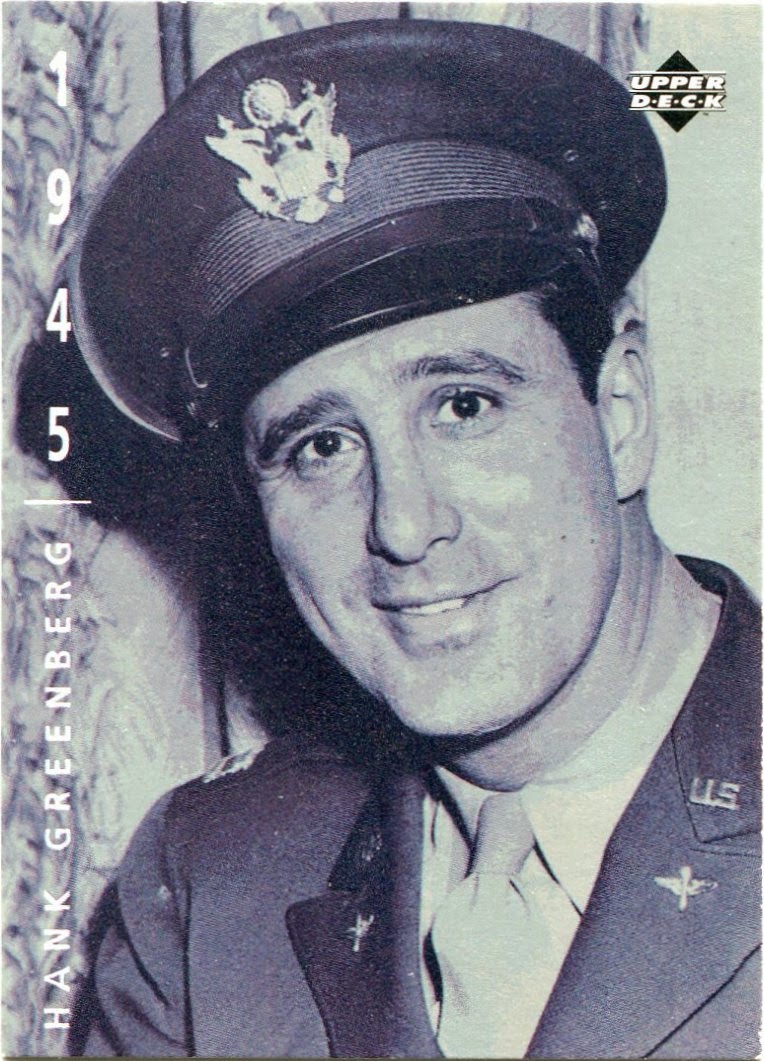 Hank Greenberg is one of my favorite figures from the annals of baseball history.

Much like Bob Feller, he missed nearly four full seasons of his prime due to military service. Greenberg was actually honorably discharged from the Army in December of 1941, but re-enlisted months later. He mainly served in administrative capacities during the war.

Greenberg came home to a hero's welcome in 1945, and would go on to blast a league-leading 44 homers the following year.

Though he only played 13 seasons in the majors, he was rightly inducted into Cooperstown in 1956. 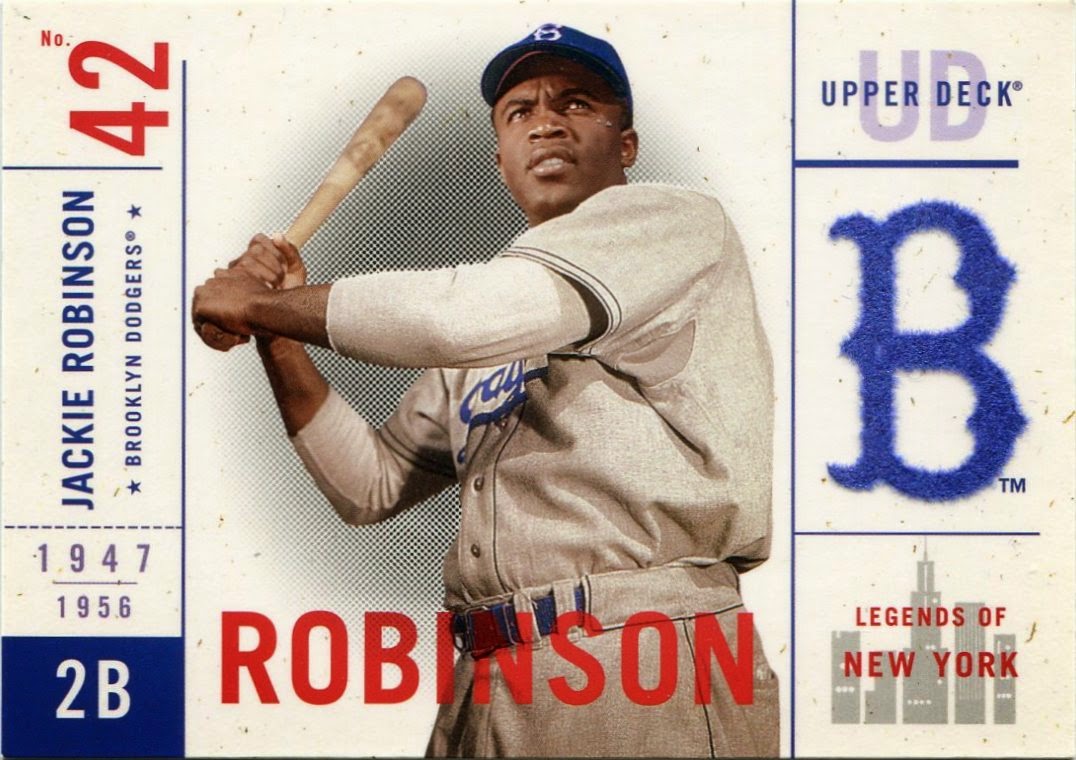 With all that he accomplished, people tend to forget that Jackie Robinson served in the military.

He enlisted in the Army in 1942, although a broken ankle he suffered in high school kept him from going overseas.

One of my favorite little bits of American trivia is the fact that Robinson was court martialed (but later acquitted) for refusing to move to the back of a military bus while stationed in Fort Hood. 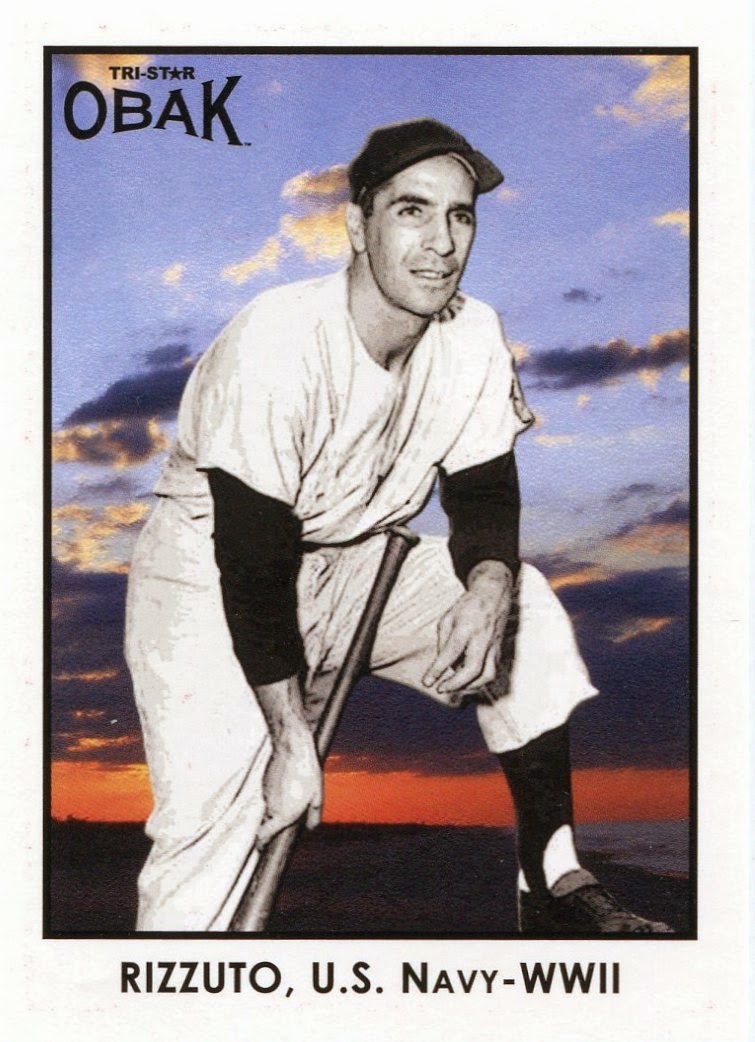 "Scooter" had two standout seasons with the Yankees in 1941 and '42 before enlisting with the Navy in 1943.

He served at the Norfolk base with Bob Feller until contracting malaria in the Pacific. The U.S. sent him to recover in Australia, where he coached the Navy baseball team.

Rizzuto, of course, would come back to have a Cooperstown-worthy career at shortstop, capturing the 1950 A.L. MVP Award thanks to his 125 runs and .324 average.

Though I wish I could've seen him play, I wish even more to have heard him announce for the Yankees during his time as a broadcaster.

The guy was a riot. 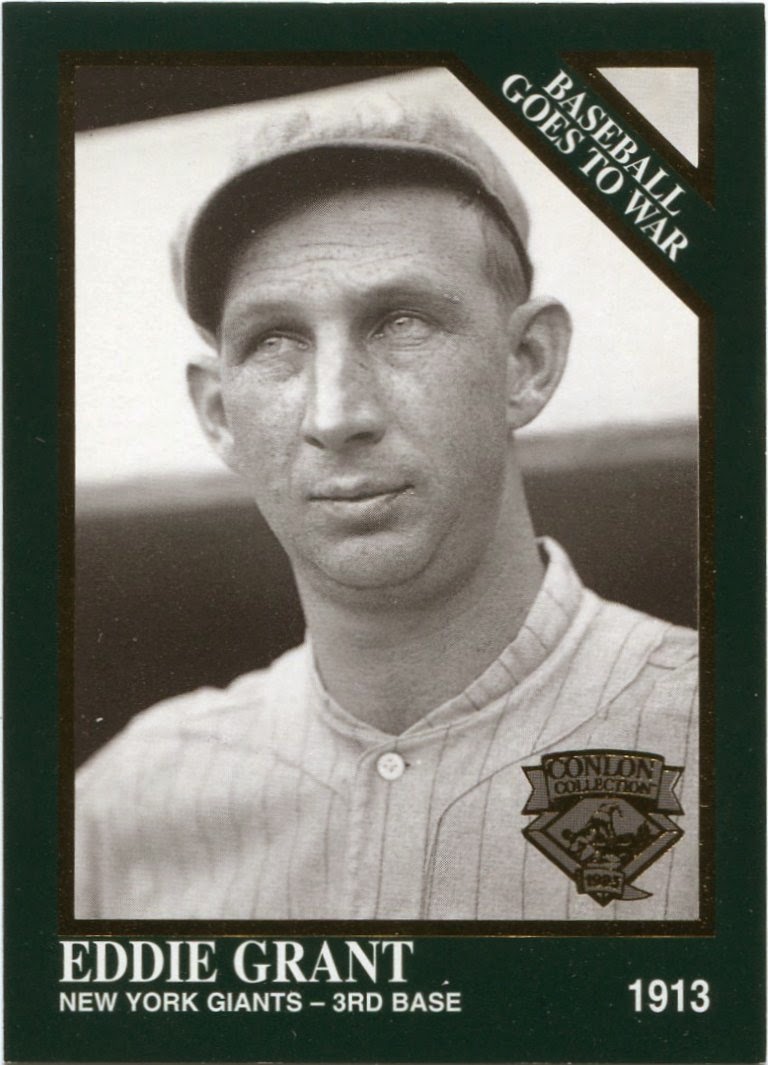 Eddie Grant may not be as famous as the other members of this squad.

He hit .249 in a ten-year career that ended in 1915. By 1917, Grant was completely out of baseball. That didn't stop him from becoming one of the first men to enlist in the army after America's entry into World War I, however.

He was promoted to the rank of captain before being tragically killed in action in France on October 5th, 1918.

I consider this card to be one of the centerpieces of my collection.

It's the only one I own of a ballplayer who paid the ultimate sacrifice to our country. 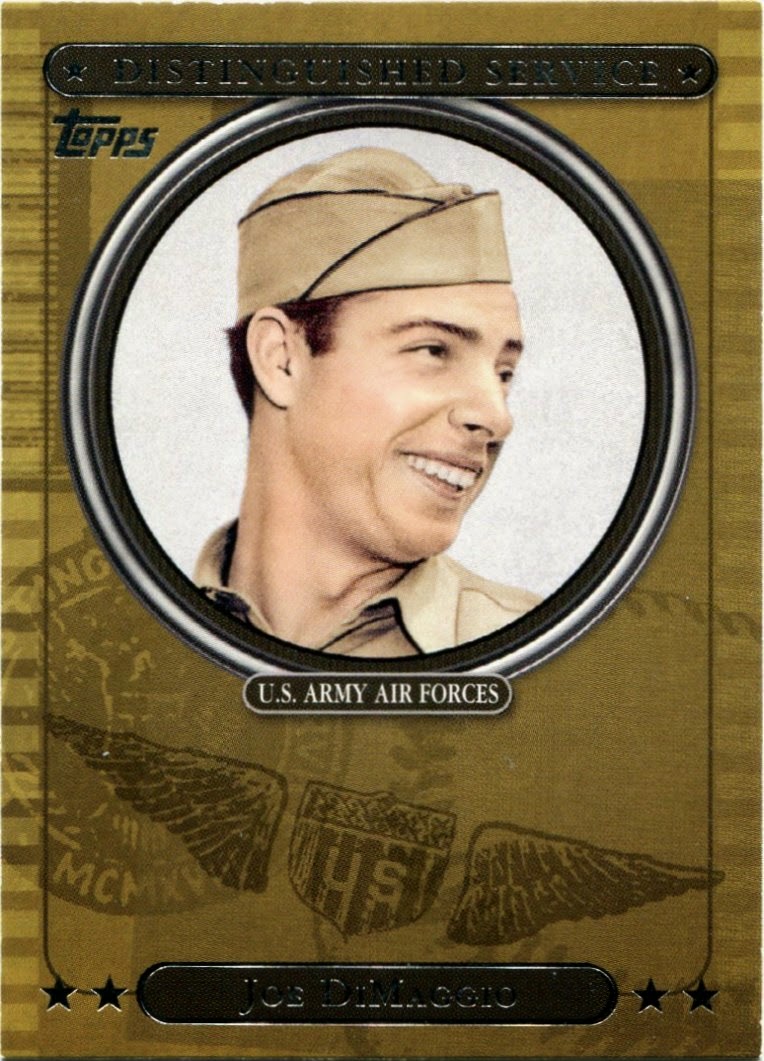 "Joltin' Joe" was yet another star who lost prime years of his career to military service.

He enlisted in the Air Force in 1943, reporting to the Santa Ana Air Base in California. DiMaggio put together a 27-game hitting streak for the Santa Ana baseball team while serving.

Due to a serious stomach ailment, however, "The Yankee Clipper" never saw combat in the war. He was discharged in September of 1945.

Though I haven't talked about them as much as I'd like on this blog, I really like the look of these Distinguished Service inserts. 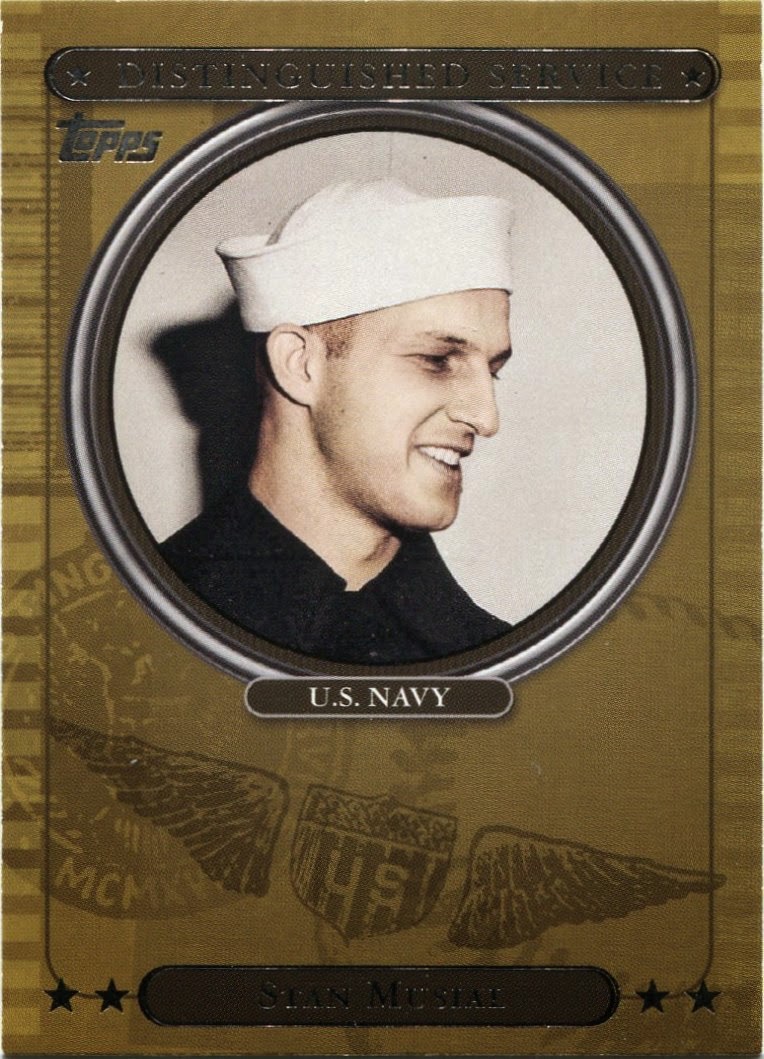 I liked them so much, in fact, that I put together the entire 30-card set when they hit the shelves in 2007.

It was one of my first major conquests upon returning to the hobby the year prior. I love how Topps managed to find military shots of guys like DiMaggio and a young Stan Musial.

"Stan the Man" was coming off a 1944 season that saw him hit .347 when he joined the Navy the following year, during which he was sent to Hawaii. Though he never saw combat, one can only imagine what Musial would've done with that extra year of his prime.

Especially considering he hit .365 upon his return to the game in 1946. 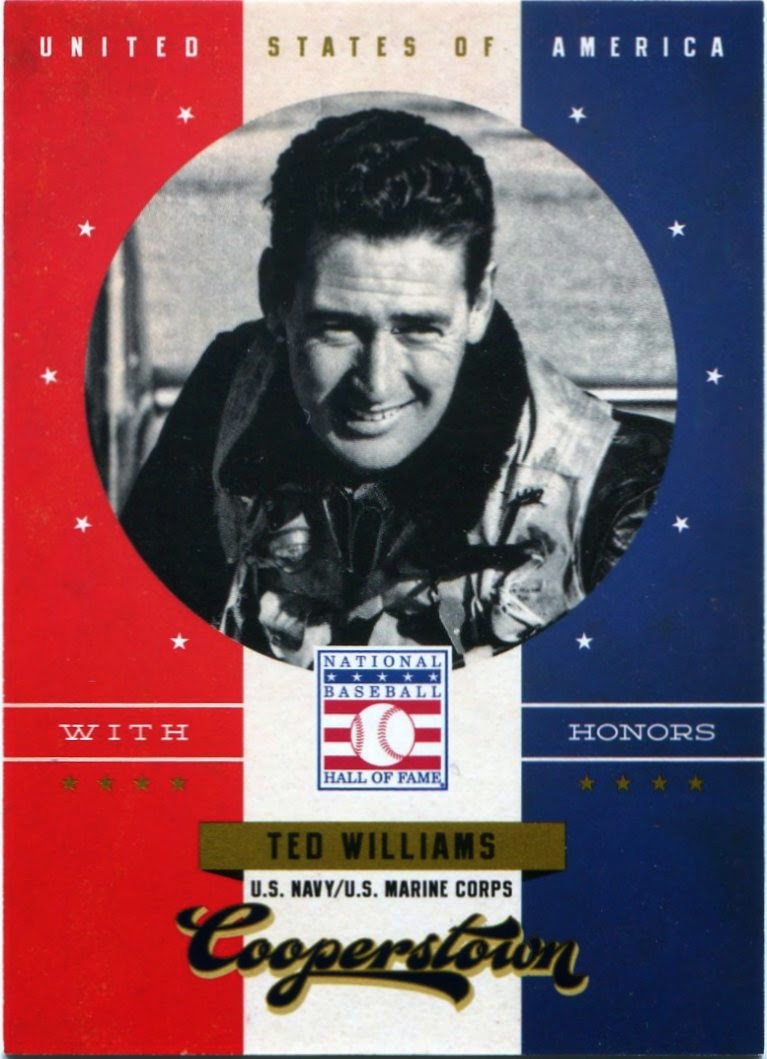 "The Splendid Splinter" might be the most famous out of all the ballplayers who served in the military.

After posting batting averages of .406 and .356 in 1941 and '42, Williams enlisted in 1942. He received pilot training for much of his service during World War II, though the war ended before he could see combat.

However, seven years later, Williams returned to duty to serve during the Korean War. This time, he saw action, flying 39 combat missions and even having to come in for a dangerous crash landing on one occasion. He missed nearly the entire '52 and '53 seasons as a result.

Between World War II and Korea, "Teddy Ballgame" lost nearly five whole years of what is considered by some to still be the greatest career in baseball history.

What he could've done with an extra five seasons is mind-boggling.

There are a lot of former servicemen that I didn't mention in this post. Bill Dickey, Ralph Kiner, Pee Wee Reese, and many others all enlisted during World War II. Let's not forget the likes of Carlos May, Garry Maddox, and others who served during the Vietnam War as well.

When it comes to the military, however, absolutely all the men and women who have served our country are All-Stars.

Sinceyou already have a SS, I suggest adding Jerry Coleman as announcer. Left baseball to serve in WWII and Korea.