A day in Wrigleyville 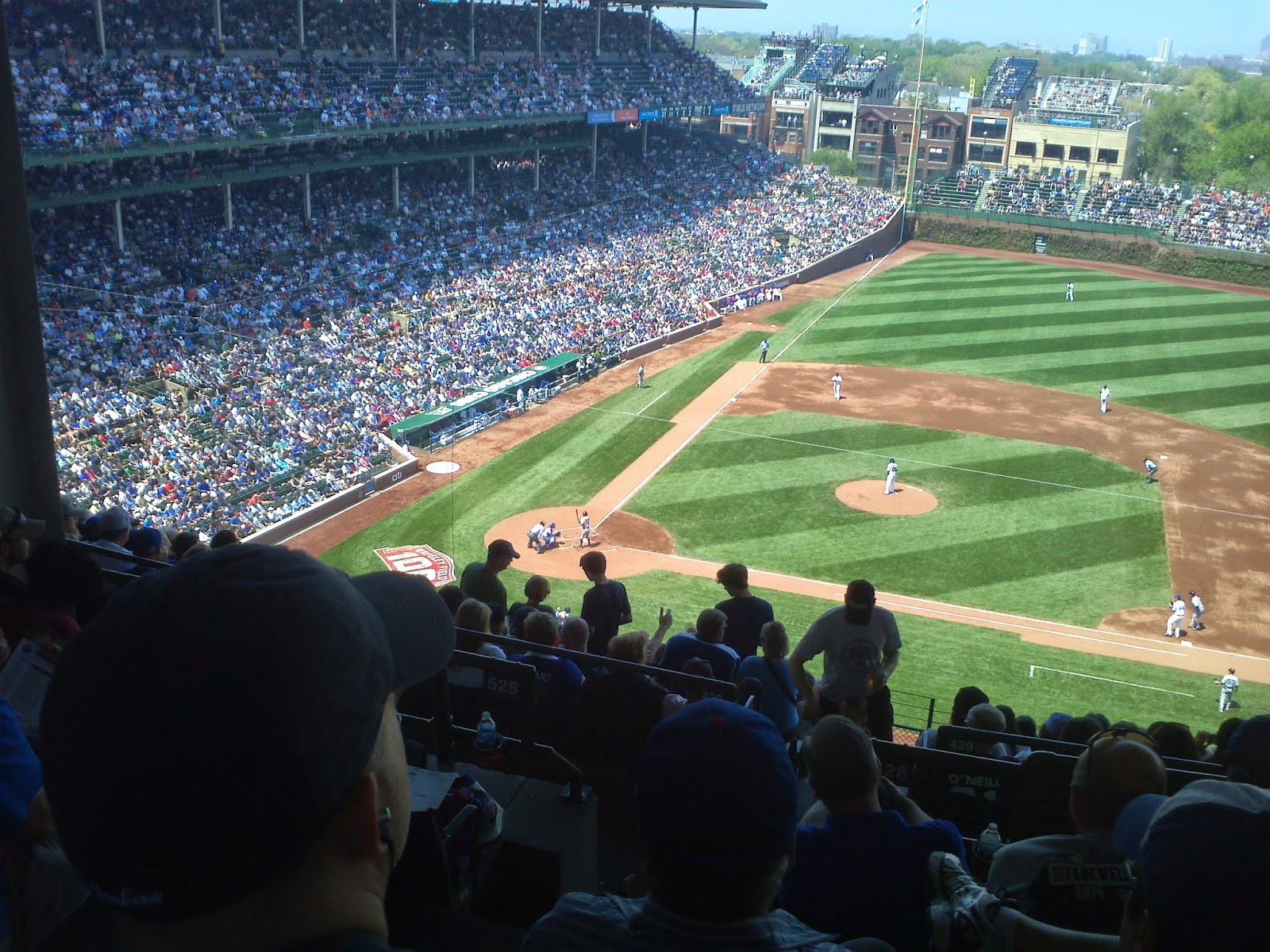 I had a good excuse, I swear.

Last afternoon, my dad and I attended the Cubs-Yankees game at Wrigley. Though we've been having some shaky weather around here, we could not have asked for a better day for baseball.

Sun shining, not a cloud in the sky. Simply perfect.

One thing I love about Wrigley is that there isn't a bad seat in the place. Unlike a lot of other ballparks, you have a great look at field no matter where you sit. Our seats in the upper deck gave us a terrific bird's eye view of the game.

Though my dad roots for both the Cubs and the White Sox, he's also a huge Yankees fan. We planned on hitting this game ever since we found out the Yankees and Cubs would be playing at Wrigley before the season started.

It was an absolute blast. 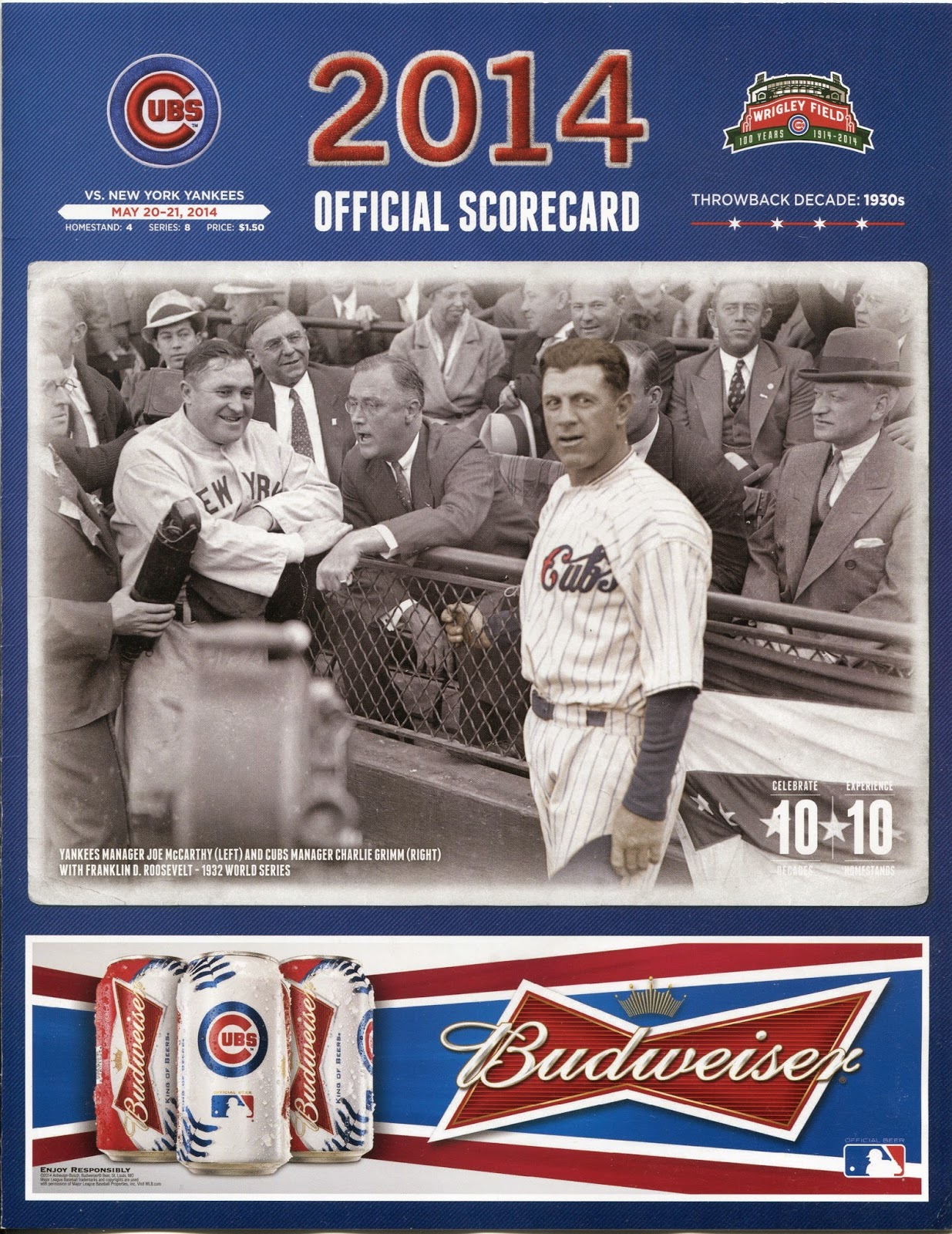 I will say that the sheer amount of Yankees fans there surprised me.

Then again, I guess the North Side of Chicago would be a prime spot for Derek Jeter's farewell tour. "The Captain" received standing ovations every time he came to the plate.

As an added bonus, Ichiro was in the Yankees' starting lineup. He's a favorite of both my dad and myself. (That's him at the plate in the photo at the top of this post.)

Seeing as how the Yankees and Cubs don't get together at Wrigley too often, I decided to buy a scorecard to commemorate the event. 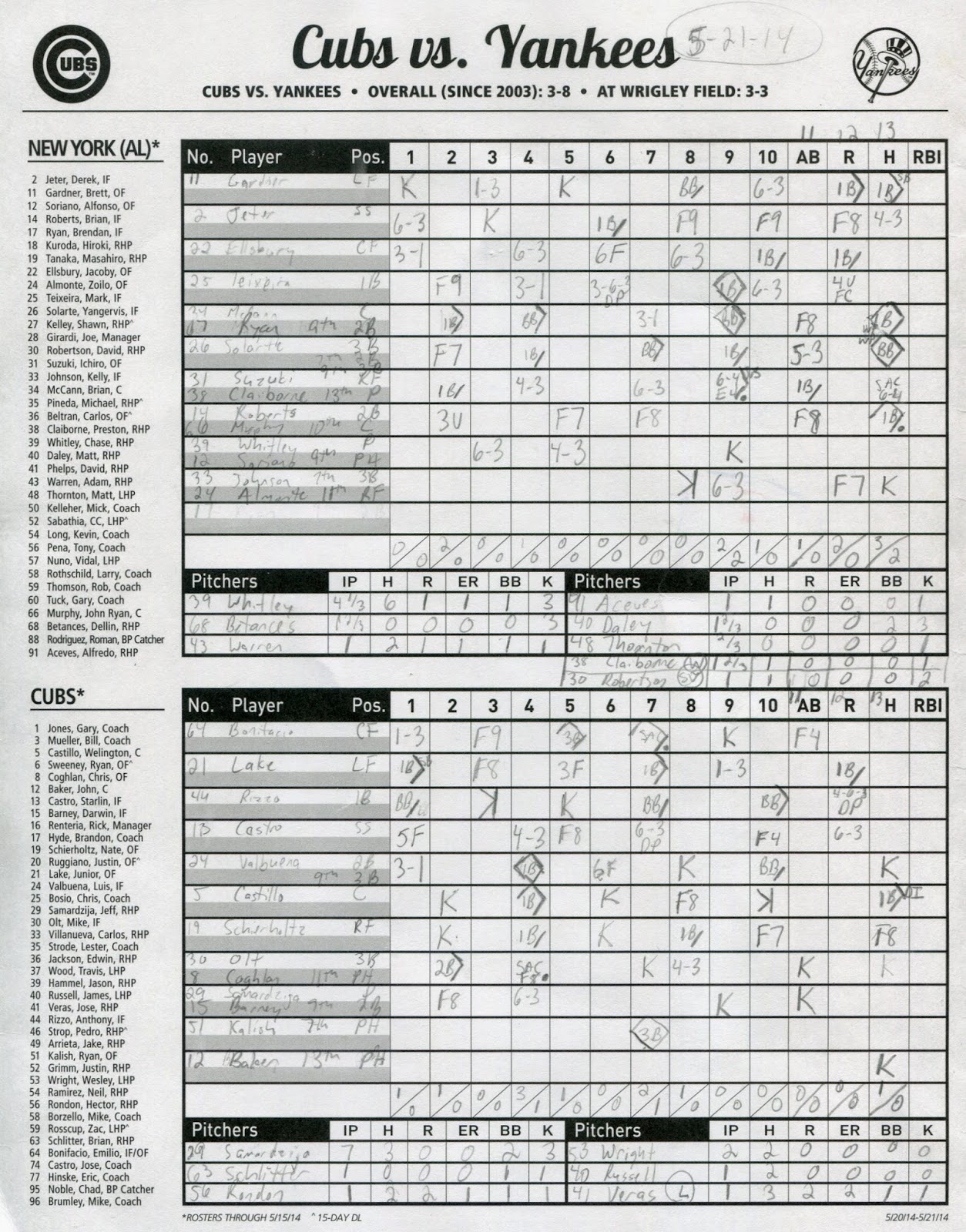 ...and the fact that I love to keep score.

As it turned out, this was a historic game for me. Why?

It was the first extra-inning contest I've ever attended. The Yankees took down the Cubbies 4-2 in 13 innings, doing no favors to my scorecard in the process.

You could call it a classic Cubs collapse. The North Siders wasted yet another sparkling start from Jeff Samardzija, who gave up all of three hits and no runs in seven innings. Perhaps it's easy to say in hindsight, but I can't understand why he was pinch-hit for in the seventh.

Of course, the Cubs blew it in the ninth. Hector Rondon gave up two runs in the ninth, partly thanks to a throwing error from Darwin Barney on a double play attempt that allowed the tying run to score. (Barney had been brought into the game in the ninth as a defensive replacement, ironically.)

Then, as I predicted when I saw that the Cubs were bringing him in, Jose "No Save" Veras allowed the go-ahead run on a wild pitch in the 13th. He even gave up another tally on a single to J.R. Murphy for good measure. The Cubs went down quietly in the bottom of the frame for the loss.

This was a pretty wacky game in terms of scoring. The Yankees used eight pitchers. Each team burned every single position player on their bench. The Yankees shifted Yangervis Solarte from third to second and back to third during the course of the game.

And Preston Claiborne, an American League relief pitcher, took an at-bat in the 13th. His sacrifice bunt actually helped those two runs score in the inning.

While the outcome may not have been ideal, my dad and I had an awesome time at the game. I can't thank him enough for the tickets and the great day at the ballpark.

What I didn't know was that our afternoon of baseball wasn't quite over yet. 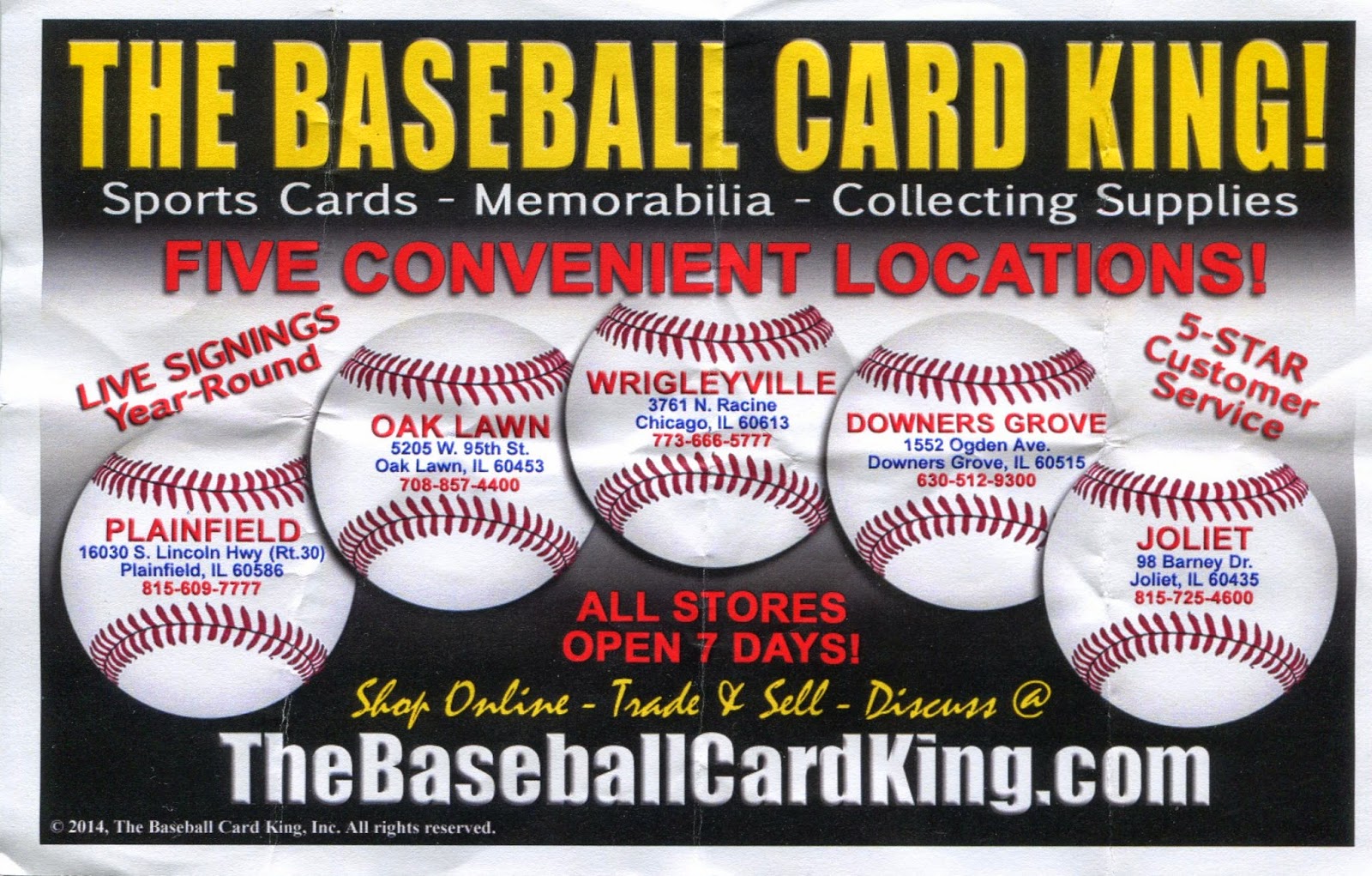 As my dad and I were walking back to my bus stop, we saw something new.

A card shop! In Wrigleyville!

I knew I'd heard of The Baseball Card King shop before. It's the same LCS Jeff frequents around his neck of the woods. I had absolutely no idea they'd opened one up in Wrigleyville.

My dad and I didn't even think twice about making this unscheduled stop.

After all, how often can you say you went card shopping after taking in a baseball game? 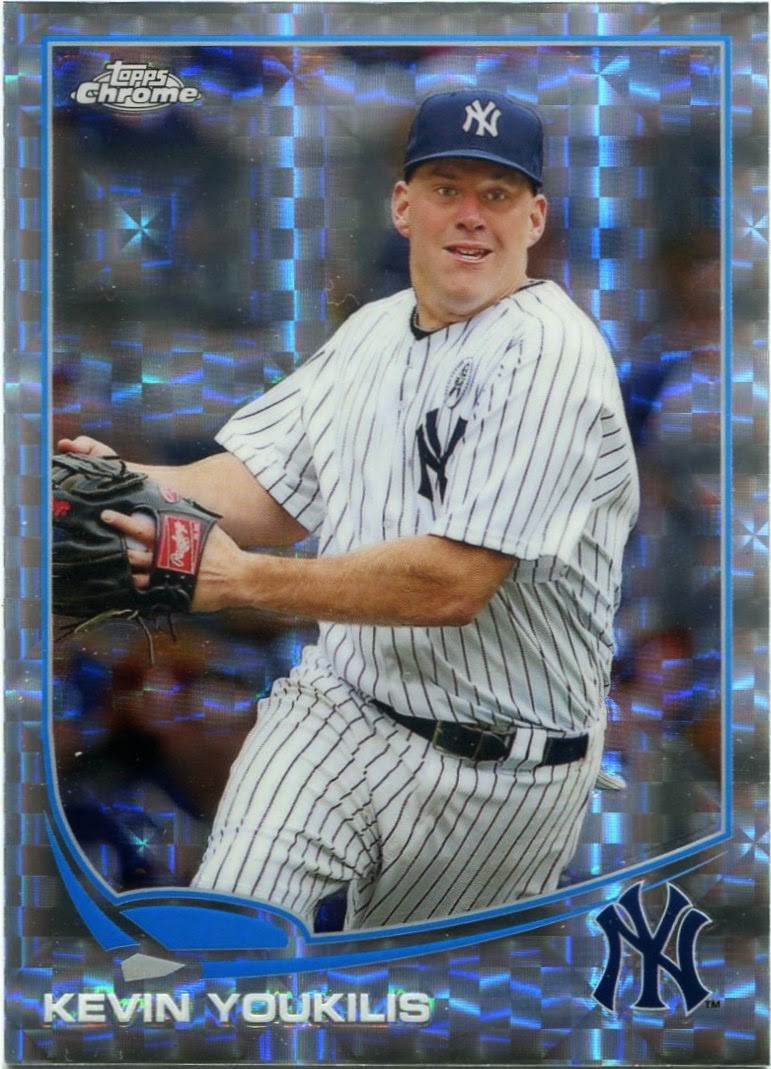 I could tell the place was fairly new from the start.

Almost all of the main floor seemed to be comprised of supplies. As far as I could tell, there weren't any cards out in the open. They were all behind glass cases.

I'm usually hesitant about shops like these, but my dad told me to pick a few things out anyways. I told him that wasn't necessary, but he insisted.

He takes me to a baseball game and lets me get a few cards afterwards. How awesome is that?

I spotted a few relatively cheap X-fractors in one of the cases. 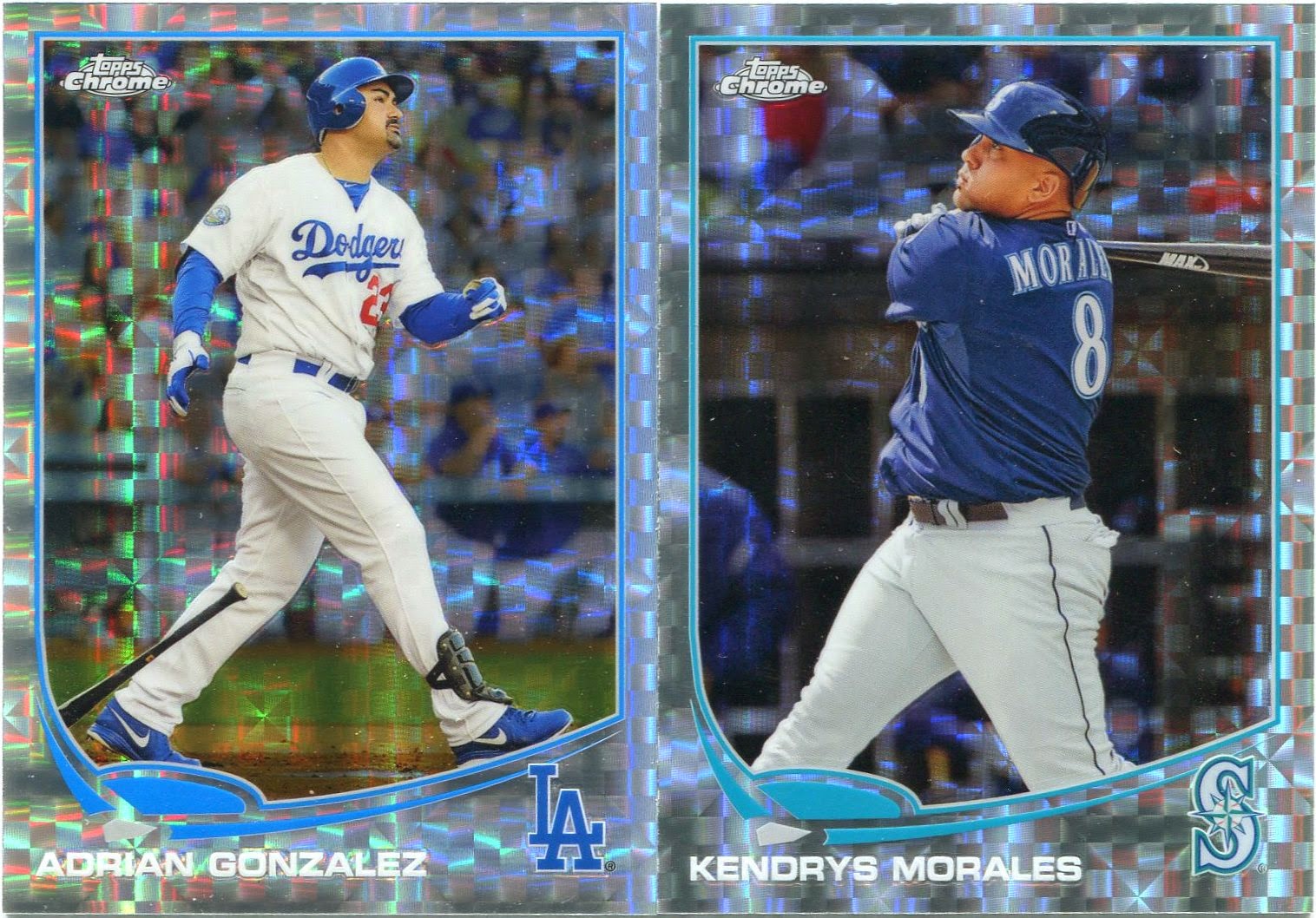 ...and these two for fifty cents a piece.

Though some of them were overpriced, the owner had a lot of vintage for sale. Enough to fill more than two glass cases.

Not a lot of them were what I'd call cheap. After a rather thorough search, however, I found a couple that were to my liking. I was originally only going to get one, but my dad told me to grab them both.

How could I say no? 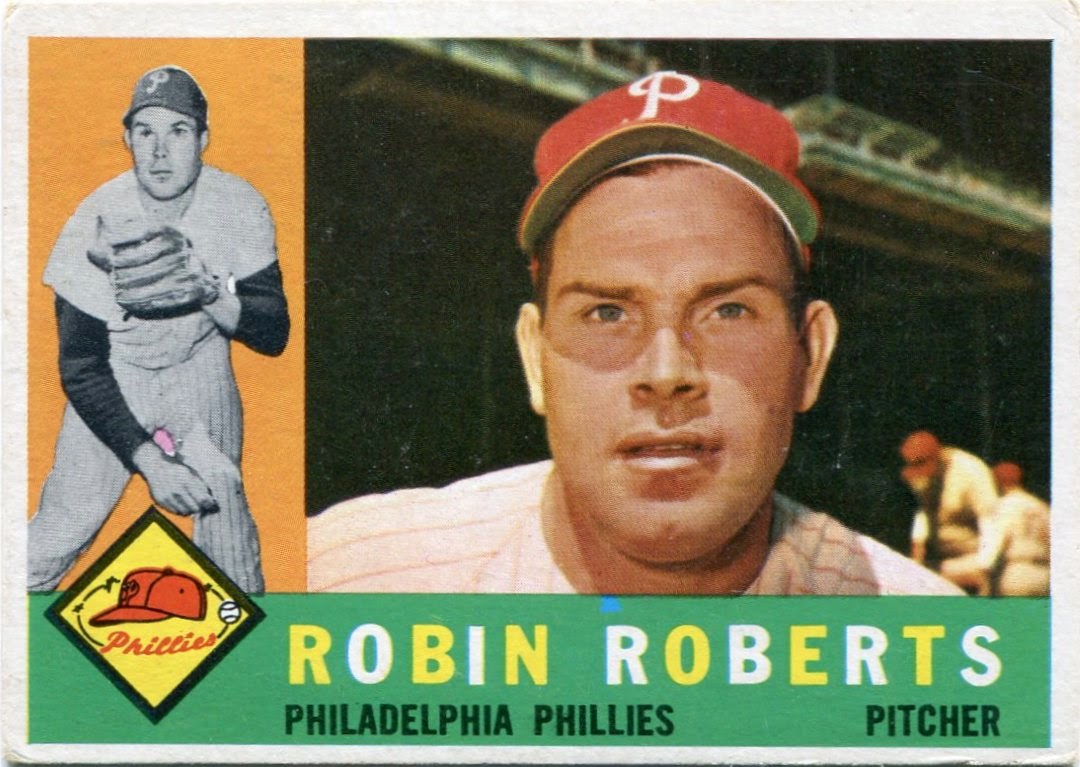 The fun started with this 1960 Topps Robin Roberts.

I felt five bucks was a fair price for this one. You might be able to find it cheaper elsewhere, but you won't find one in this kind of shape for much cheaper.

I've gone out of my way to try and track down some of the biggest names from 1960 Topps. 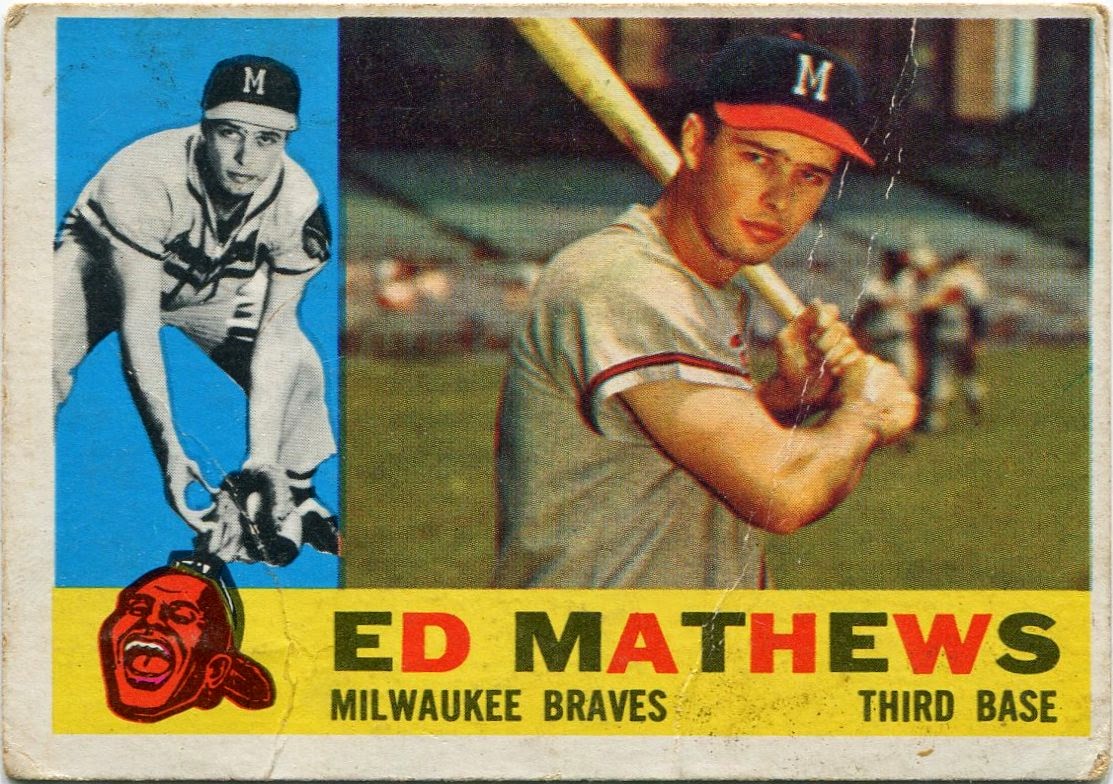 I guess that's why I had to complement Roberts with Mr. Mathews here.

I can say for a fact that this is one of the most beautiful 1960 Topps singles I've found. I love the sheer colors and the empty seats behind the great slugger in that shot.

Though it features a few creases, five bucks is more than fair for this one. Its semi-high number status (#420) makes it a relatively tough find at any price.

Mathews was coming off a 49-homer season when this one hit the streets, an additional bonus to an already fantastic piece of cardboard.

Plus, it's now the oldest Eddie Mathews card in my collection.

I walked out of that card shop with a huge smile on my face.

Between baseball, cardboard, and quality time at the ballpark with my dad, I don't know that I've had many better afternoons in my life.
Posted by Nick at 6:23 PM

"Though my dad roots for both the Cubs and the White Sox...."

That means he is a Cubs fan. No real Sox fan ever roots for the Cubs. :)

Me too,buddy...great day all around (well,not for the Cubs...)....and kudos for sticking with the scorecard!....

I wish my dad still liked baseball that much.

But I don't know if I could take it if he was a Yankees fan.

I'm guessing that as a Cubs fan you have to sorta jettison the idea that a victory is necessary for a good time. Sounds like a great day.

You had a great day.

Cool day out.
And that A-Gon card rocks!