The two types of Cubs fans 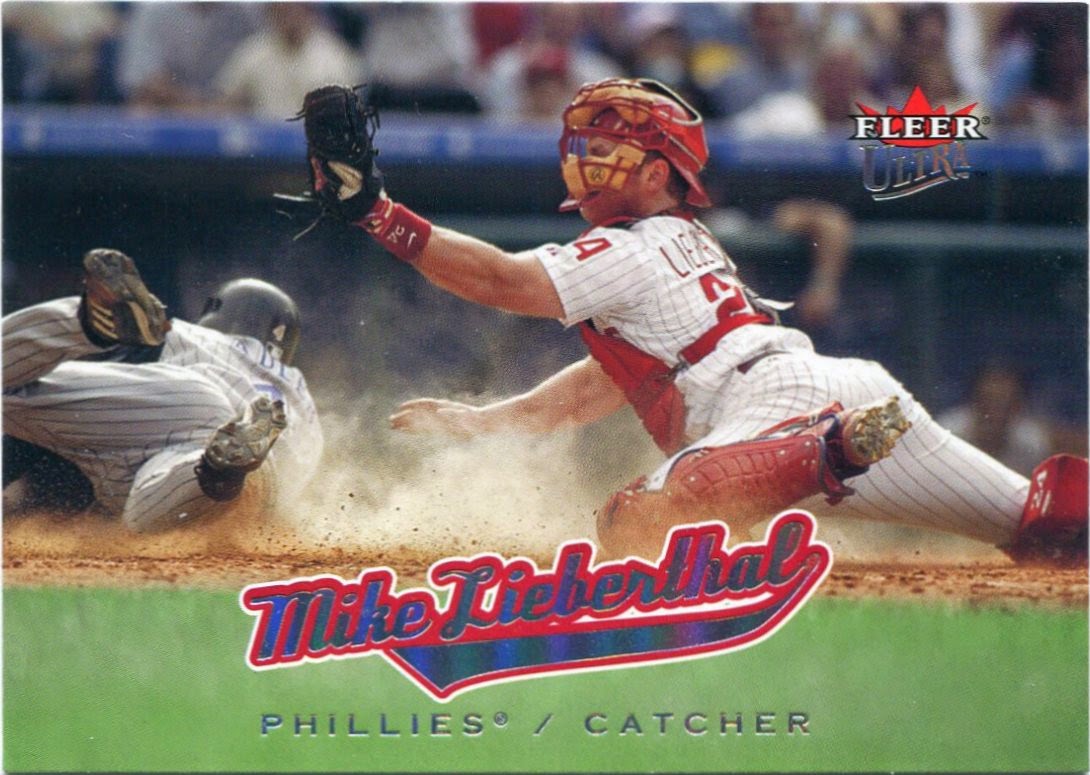 I know the stereotypes a lot of people have about Cubs fans.

Drunk, disorderly yuppies who treat Wrigley Field like a bar and don't actually care about baseball at all. Right?

Being a Cubs fan myself, I'd like to refute the existence of those types of people. But I'd be lying through my teeth if I didn't say they weren't around.

At each of the last few Cubs games I've attended, the "fans" sitting behind me would not stop talking the entire game. Listen, chatting with friends and/or family is part of the ballpark experience. But these people just would not shut up. It got to the point of distraction.

Not surprisingly, I heard one member of the herd ask "What's the score?" on a couple different occasions at the last game I saw at Wrigley. Go to a couple of the bars around Wrigleyville on a weekend and you'll see the same kinds of people.

Now, on the other hand, some Cubs fanatics are the most loyal, knowledgeable, and greatest people you'll ever meet. There's no doubt in my mind that Tony, fellow Cubs fan and author of the terrific blog "Wrigley Roster Jenga" is one of them.

He recently sent me a wonderful trade package that resulted in a slew of new cardboard for my collection. If this awesome Mike Lieberthal "play at the plate" is any indication, I could tell he took quite a bit of time and effort to customize this batch to my liking.

As is the kindness of a true Cubs fan. 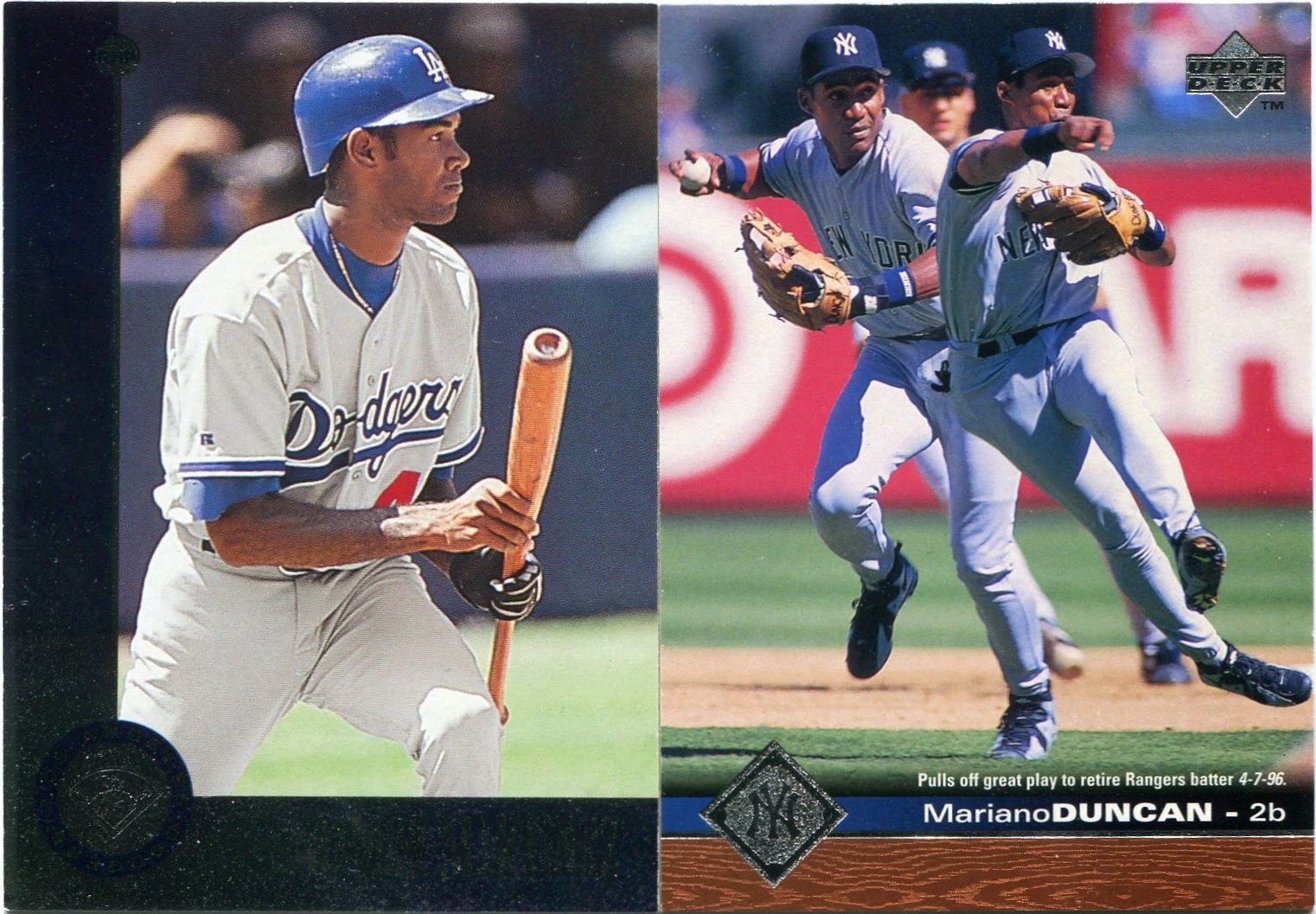 Pitchers at the plate are always welcome around here.

And I especially enjoyed the Derek Jeter cameo on that "multiple-exposure" Duncan. 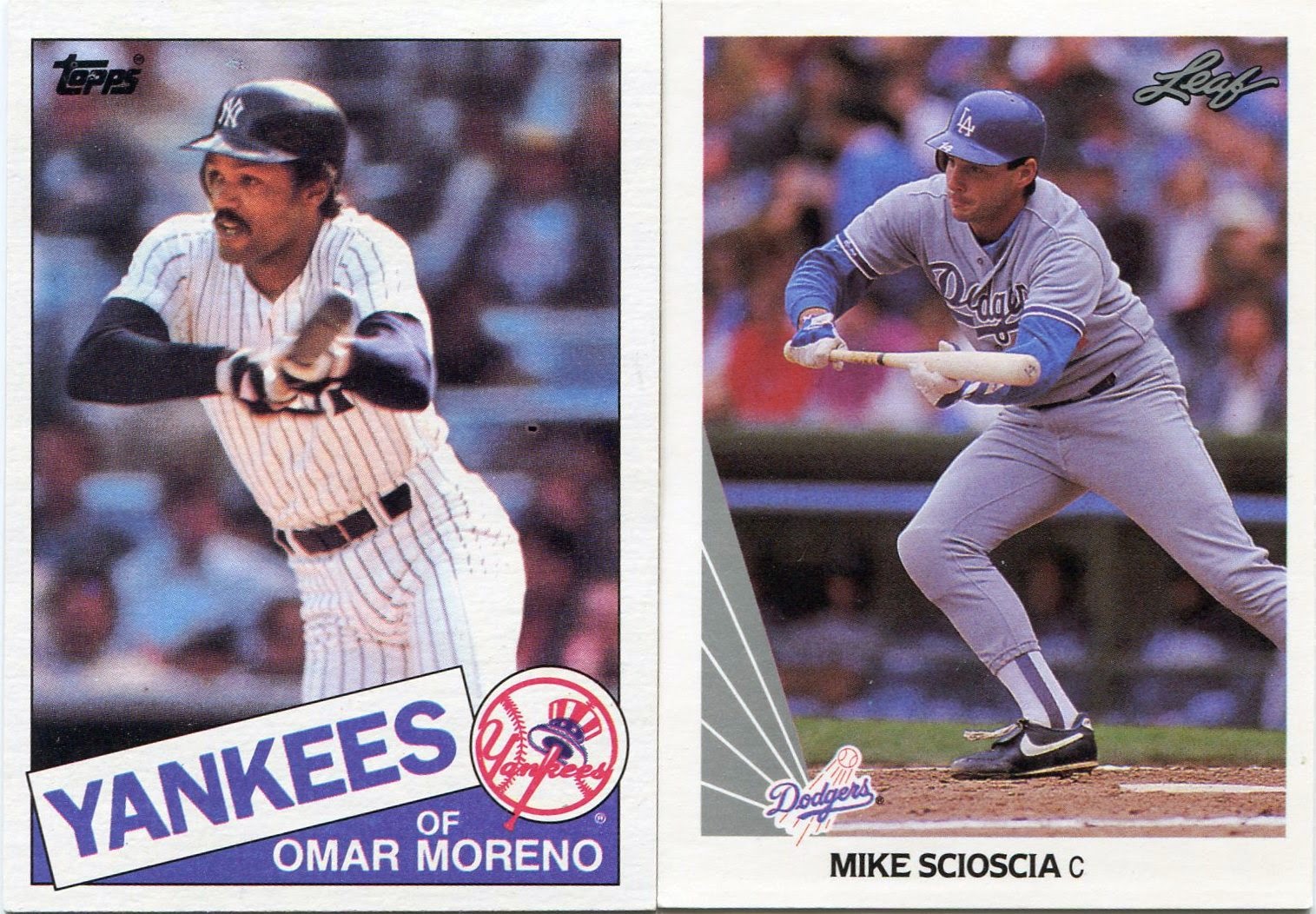 As I've said before, I haven't actually started a bunting mini-collection...yet.

Still, that hasn't stopped people from sending them my way over the last couple years. I wouldn't be surprised if I decide to officially declare it as a new mini-collection quest in the near future.

If I do, these will make for a couple great nominees. 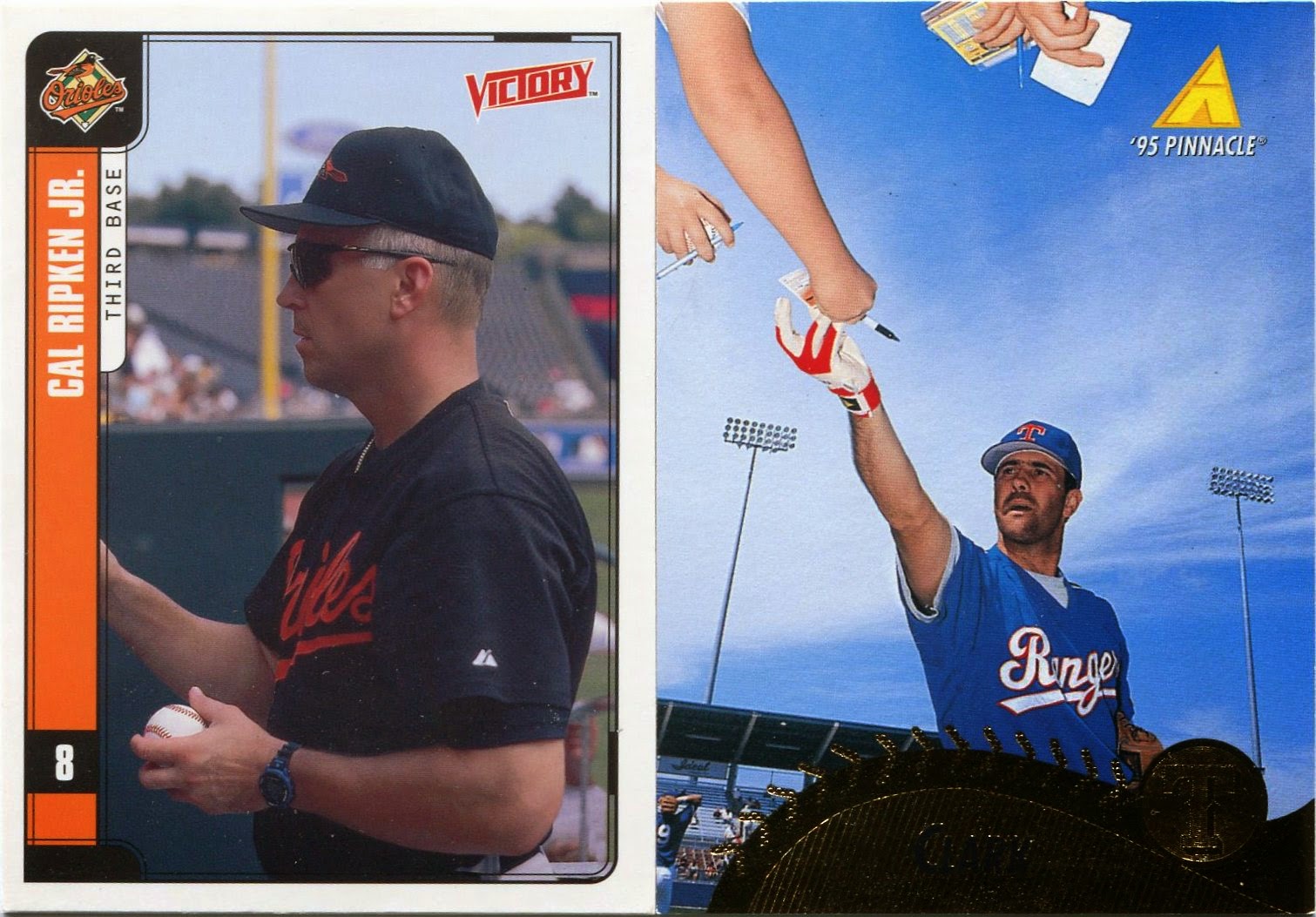 Take a look at these star-studded "autograph" shots.

By the way, if anyone is sitting on a mountain of spare UD Victory singles from the late '90s or early 2000's, I'd be more than happy to take them off your hands.

They're terrific cards that don't often pop up in dime boxes for some reason. 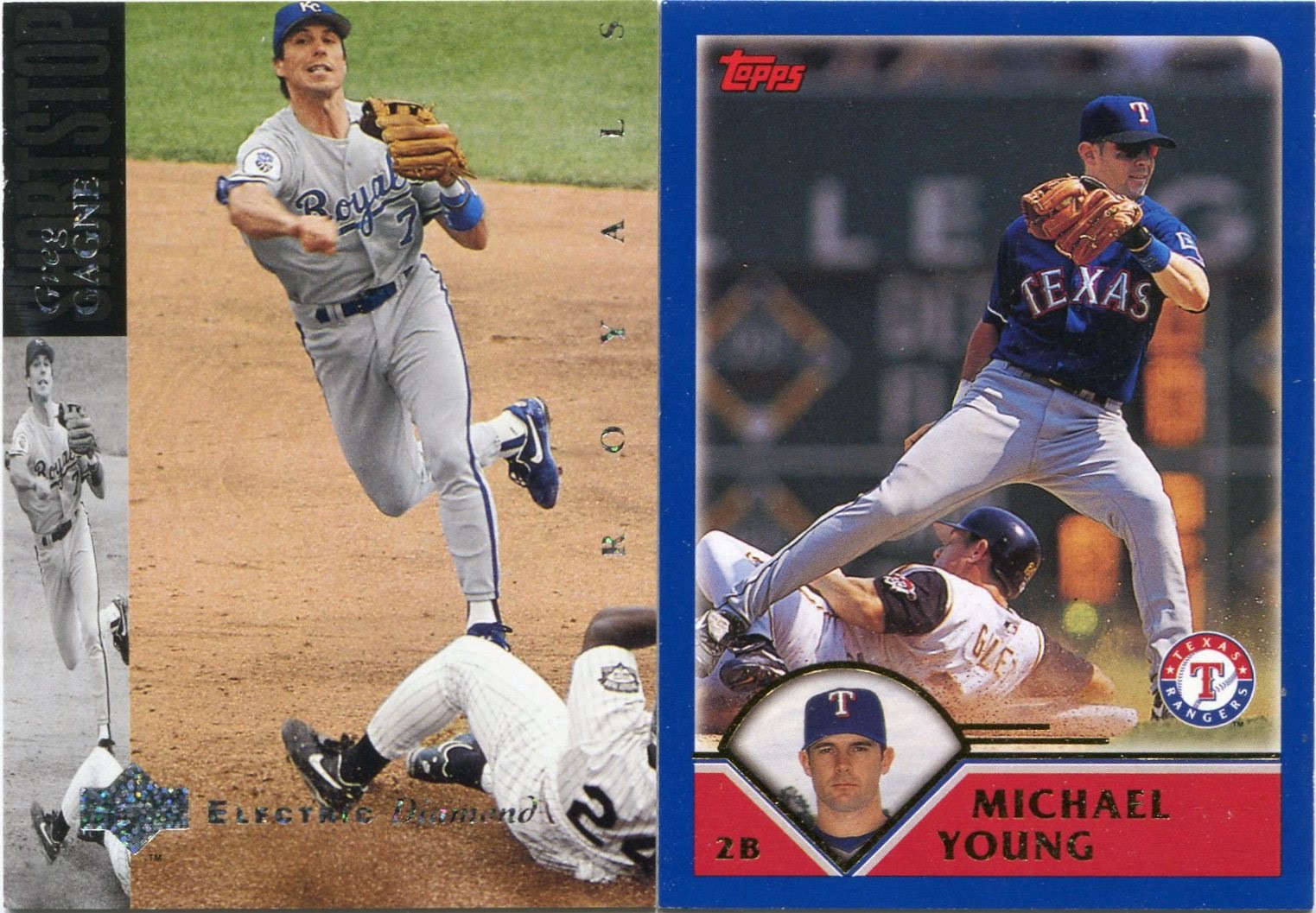 After taking a closer look at it, I'm debating on whether or not the Young is actually a double play shot.

Until I find proof to the contrary, I'm going to say yes for now. 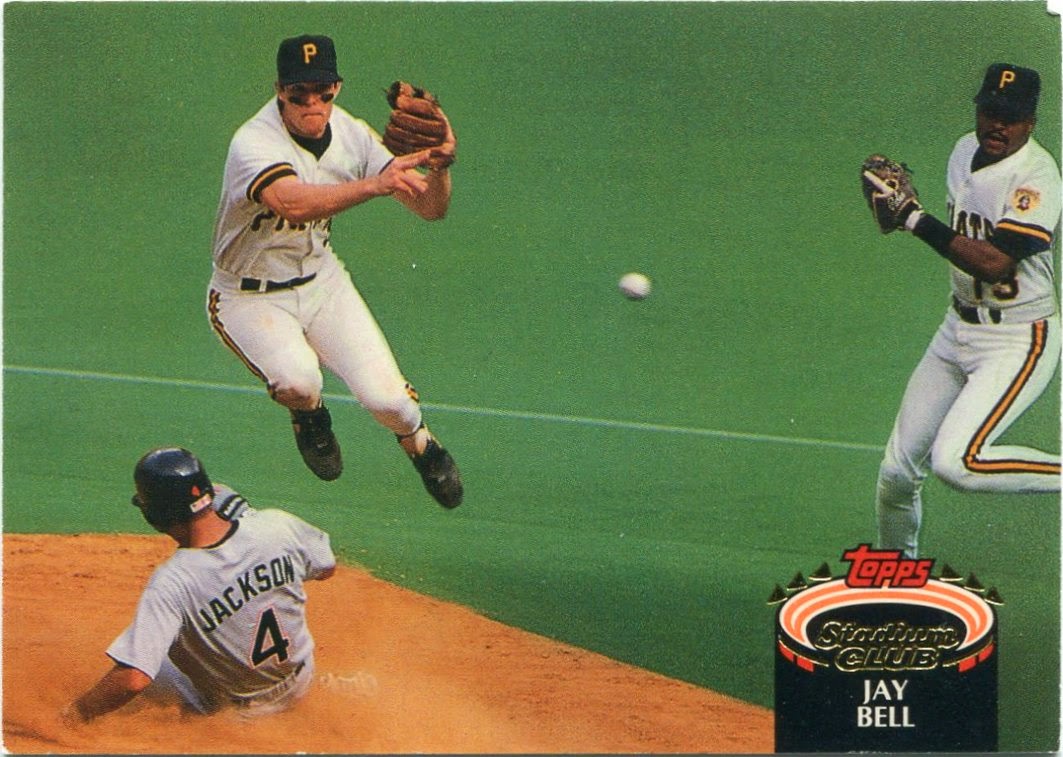 There's no doubt that this is one of the best "double dips" you'll ever see, though.

Tony managed to combine my appreciation for Stadium Club and double plays into one jaw-dropping piece of cardboard with Mr. Bell here. 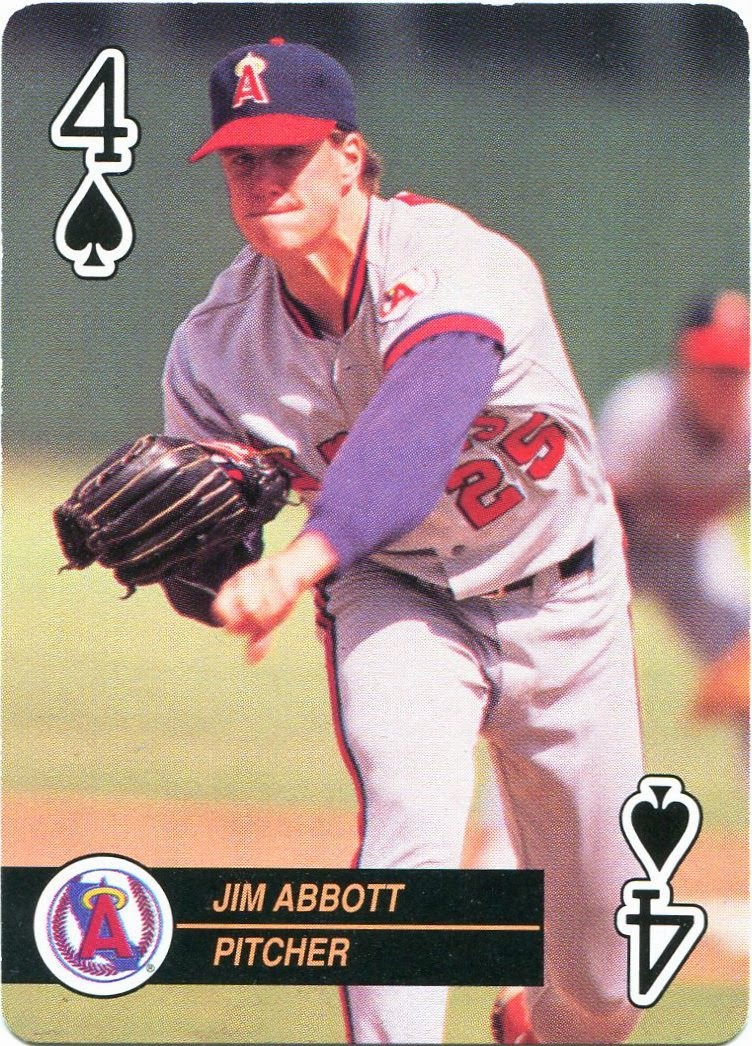 I'd like to believe that even the most fake of Cubs "fans" know who Jim Abbott is.

The man was a flat-out hero. Not surprisingly, I've put a good deal of effort into building a formidable collection of him over the years.

Finding anything new of Abbott is always exciting.

But for Tony to send along a new oddball of his was even better. 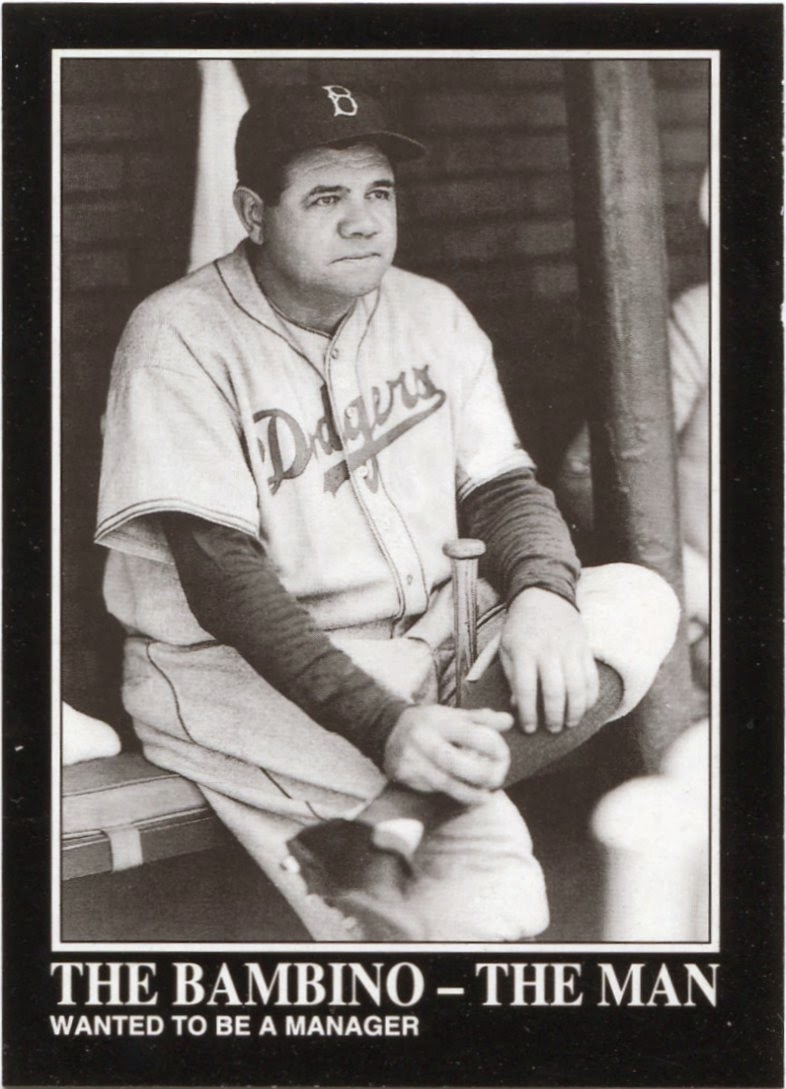 I don't know if Tony read about one of my past repack experiences.

If he did, though, then he probably knew how much I'd appreciate this one. I went berserk over finding a card of "The Babe" as a Dodger coach in that glorious repack.

Tony went ahead and found a second one for me to treasure.

Looking back, the Dodgers basically baited Ruth into becoming part of their franchise. They basically trotted him out as a publicity stunt in 1938, having him coach first base with the false promise of becoming their manager one day.

After passing on Ruth and hiring Leo Durocher (which, by all accounts, was the smarter move), they kicked "The Great Bambino" to the curb the very next year. It wasn't the best way to handle one of the best players in baseball history.

While his tenure with the team wasn't all that memorable, I still get excited over finding the few cards that exist of Babe Ruth as a Dodger.

Thanks to Tony, I have a new one in my collection. He's the awesome types of Cubs fan.

It's all those other ones that are giving us a bad name.
Posted by Nick at 2:36 PM

The last game I went to was with my wife. She bought the tickets as a birthday present to me and I'm sure paid dearly for what they used to call grandstand seats. We enjoyed the time before the game started, watching batting and fielding practice. Then the seats in front of us filled in and the game started. Then it got annoying. The people in front of us, adults mind you, acted like children. Aside from the beer, they were actually throwing peanuts at each other and barely paying attention to the game. We ended up leaving early.

You've got a good friend there. At first I thought you had changed up on me and had me sending cards with that Babe Ruth in there! ;-)

Anyway, great bunch of cards you have there.

I will say that the 1984 game I attended at Wrigley was much more fun than any experience that I would likely have at Wrigley these days. That was before lights and before the yuppies took over. The Cubs were still a working-man's team then...at least to the extent that the working man could skip out of work at 2 PM for a Cubs game.

Every ballpark has the fans you described. Unfortunately, Wrigley just seems to have more of them.

Hey, I've been disconnected from the internet for a few days, but I'm glad to see that you liked the package! I saw that Abbott and I knew instantly where it was going. Also, yea, I may have noticed you're last repack experience post.

You managed to gather a bunch of great cards in this post! Love the one on the top!